Well, I *was* in Vietnam. Here is the first in a series of month-late catch up posts about my recent trip to Vietnam and Cambodia. I really had very little time to do this while I was away (and in all actuality I didn’t really take the technology to be able to do it anyway) as it was wall-to-wall cycling and exploring and eating and drinking. So these posts will be a little light on the detail, but hopefully you will get the idea!

After a brief stopover in Kuala Lumpur airport, I arrived in Ho Chi Minh City (aka Saigon) around 10am. Typical South East Asian craziness greeted me at the airport, as did bedlam on the roads as I got my cab to the hotel in the centre of the city. I would be meeting with a group that evening, but the day was mine to explore.

I only had a rough plan… a couple of historical places to see along with markets and some French architecture. Otherwise the idea was to just get out there and explore. 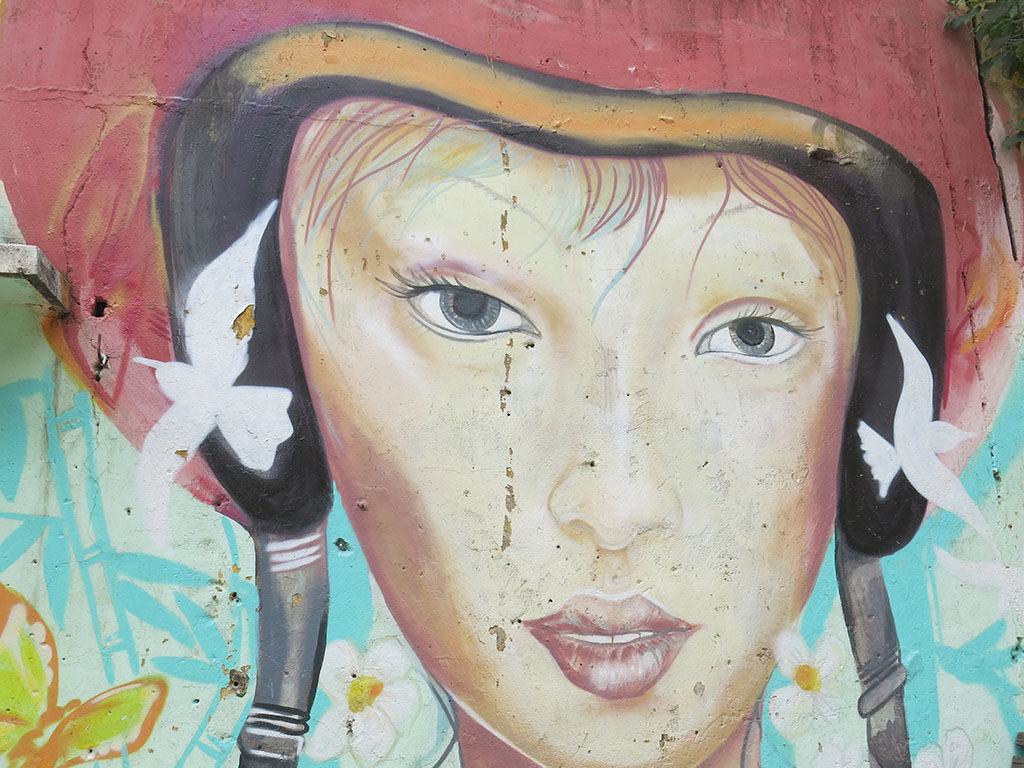 First stop was the Ben Thanh market. To be honest it wasn’t super interesting given I wasn’t looking for cheap t-shirts or knock off goods. The food did look good though, and I had my first of what would be several Banh Mi through the day. Mmmm… fresh baguette. The meat was typical luncheon meat and I was maybe expecting something a little different there (I am used to my roast pork at home) but the rest of the ingredients were nice and fresh. Just what I wanted after the airline food. 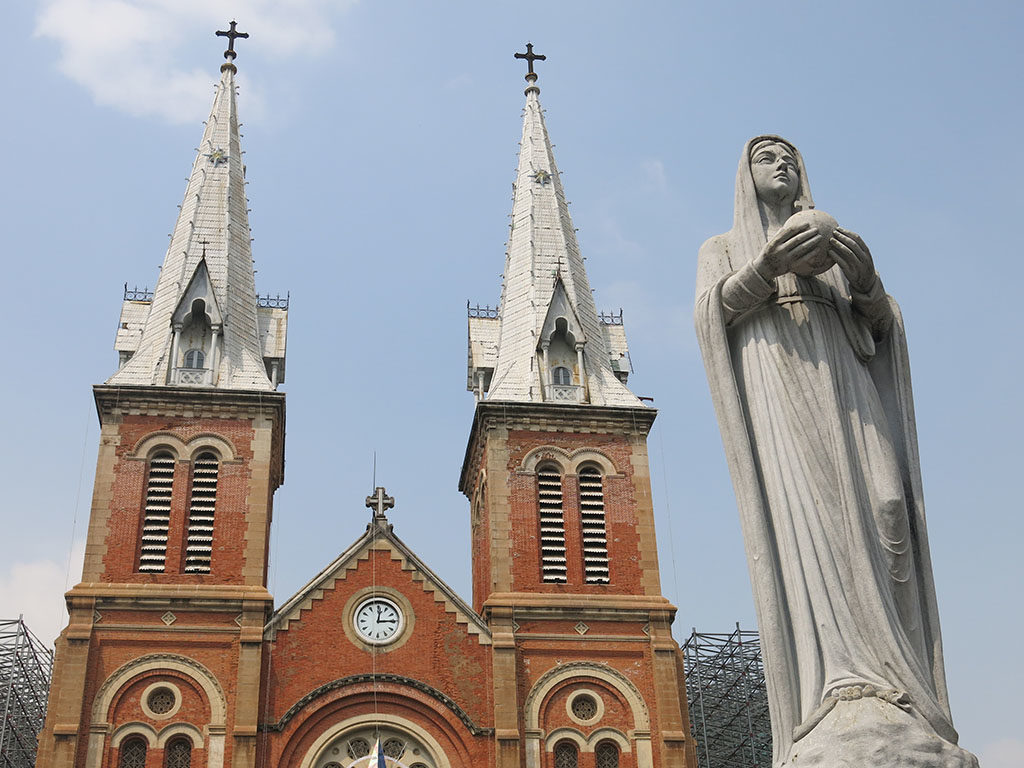 I found myself at the Notre Dame Cathedral of Saigon. If the French history of the city was not obvious before, it was now. The renovations made things a little difficult, but it was quite impressive, especially given it was somewhat at odds with the rest of the city. 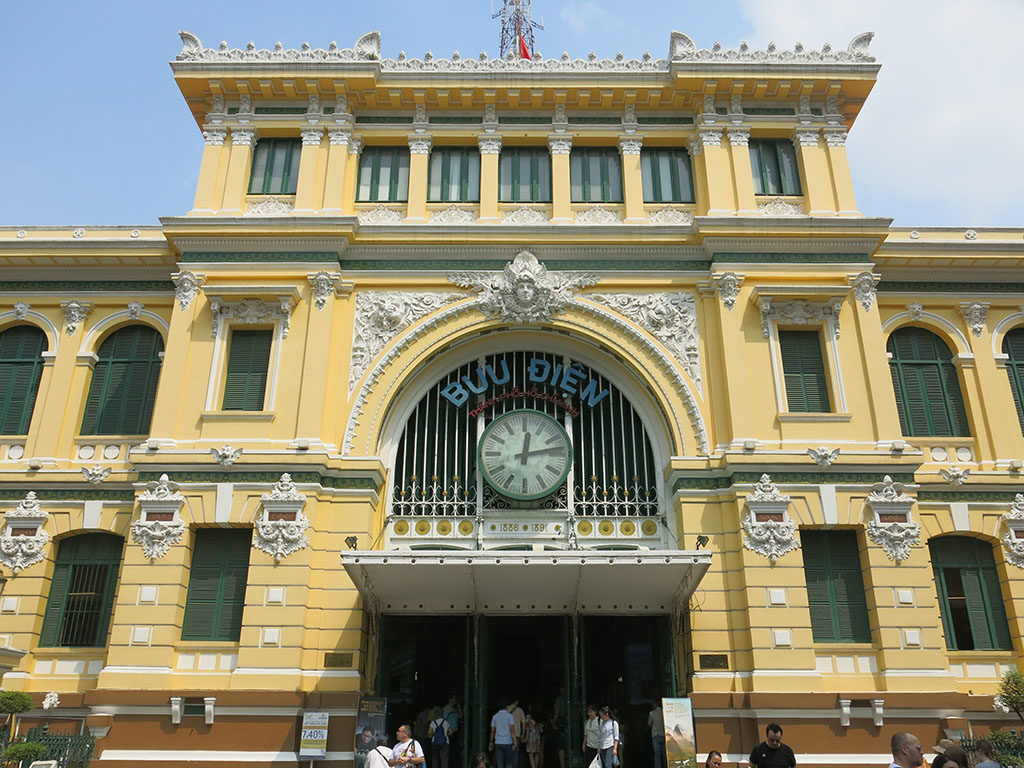 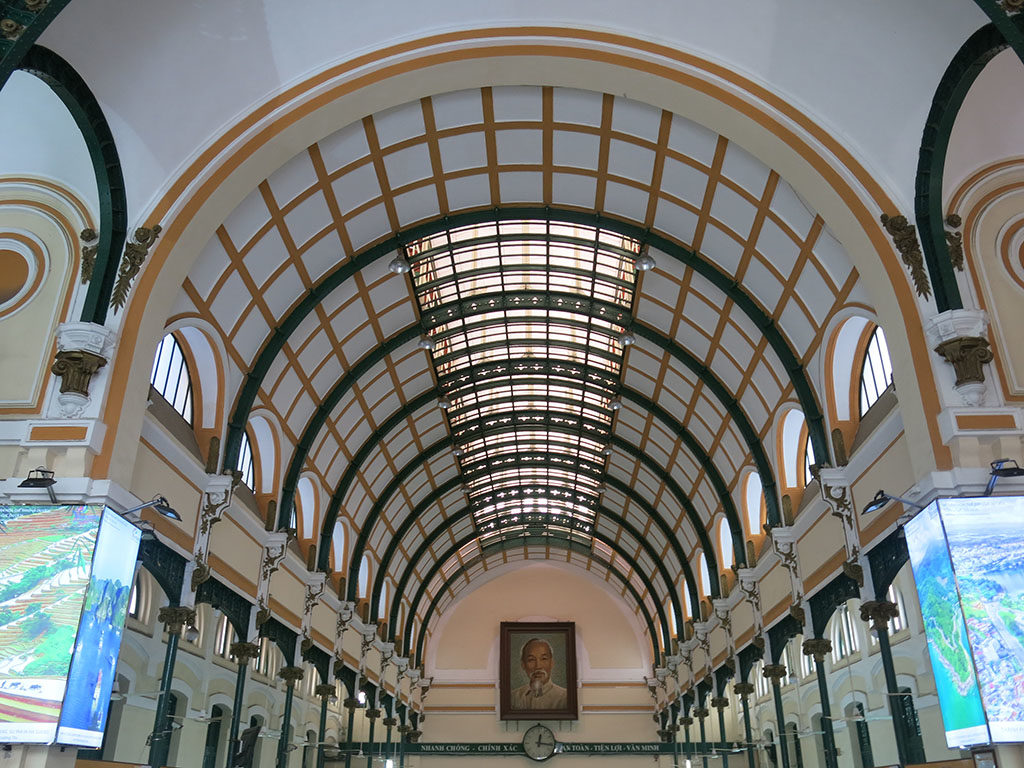 Keeping the French theme, right across the road was the Gustav Eiffel designed Post Office. It was quite cool, although smaller than I thought it would be. Inside now it is really just home to some souvenir stalls…although you can still post a postcard there! 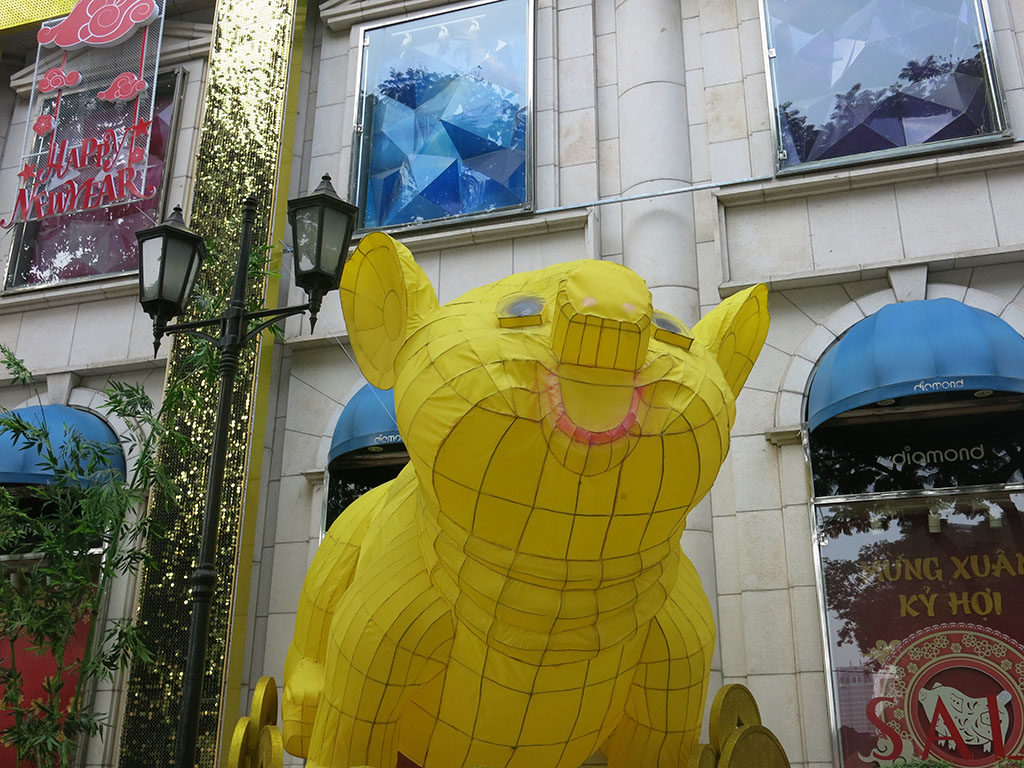 Next it was a casual wander through the streets. There was quite a great laneway housing many bookstores, just near the post office which was a delight. It also gave me time for a second banh mi! I my travels I also got to see some of the set up happening for upcoming lunar new year. This pig looked suspiciously like Pikachu I thought 🙂

In a little bit I arrived at my destination, the Independence Palace. This was the home of the South Vietnamese president during the war, as well as his place of work. I wasn’t sure what to expect really, but I LOVED this place. It was the most perfect 70’s time capsule. All the rooms, both those for work and those for living, were immaculate with 70’s furniture and decor. Symmetry at its finest! It was great to head deep into the basement to see all the tiny workrooms, and then up to the roof to see the helipad, in case he had to make a fast getaway. My highlight of the city. 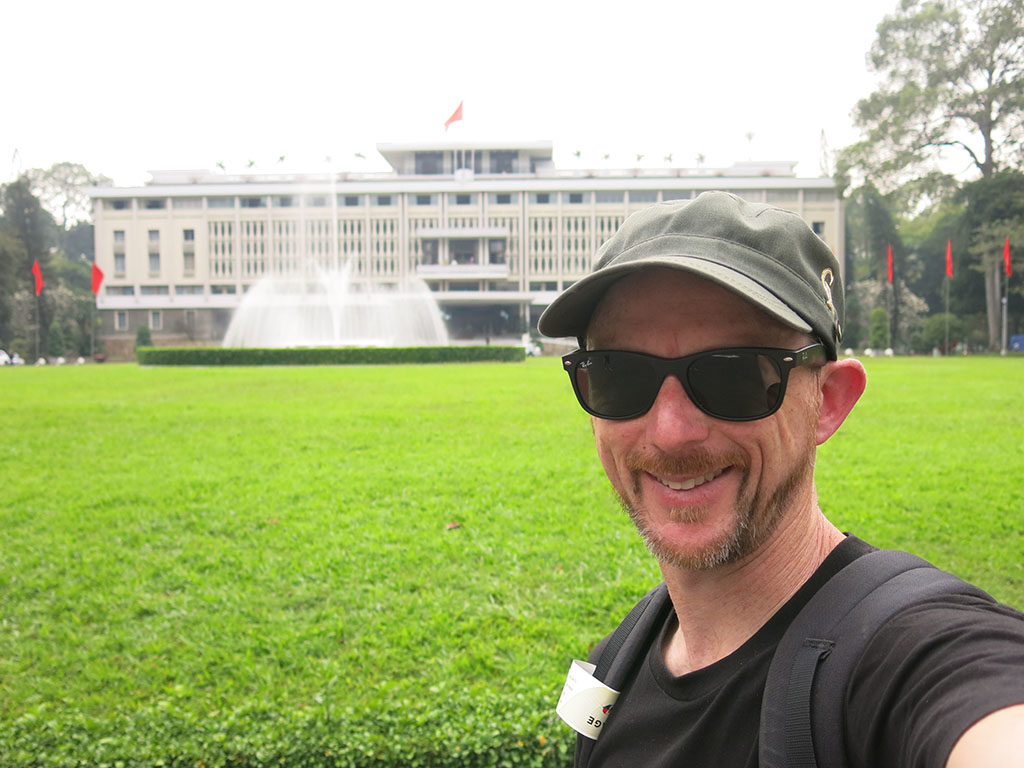 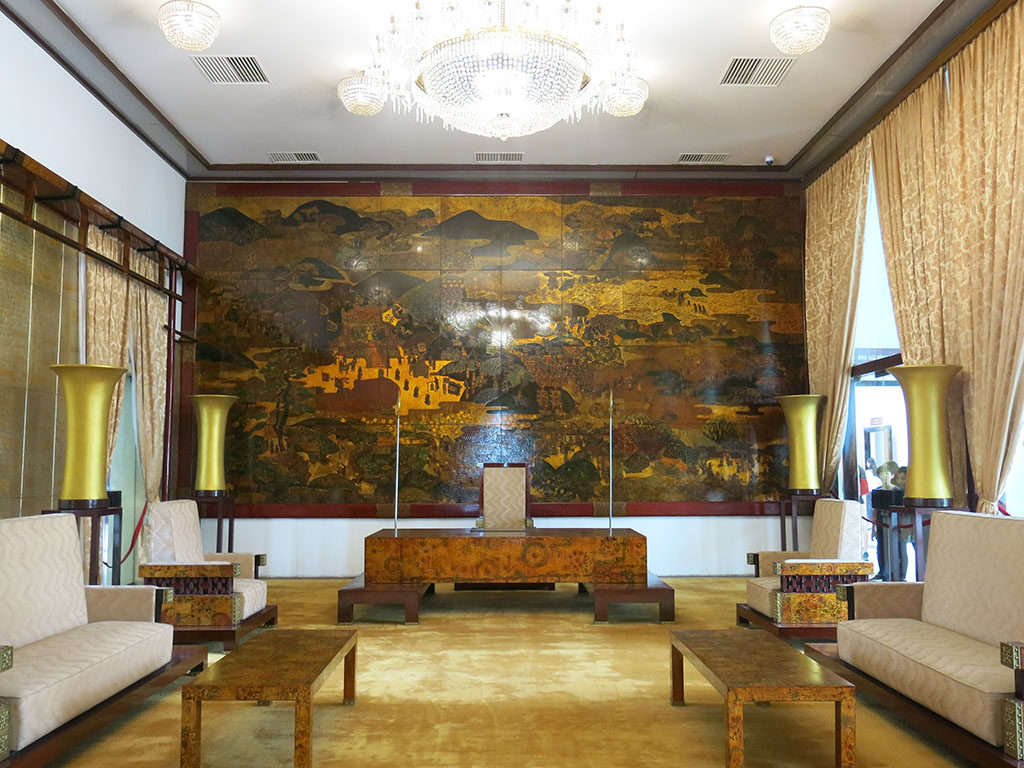 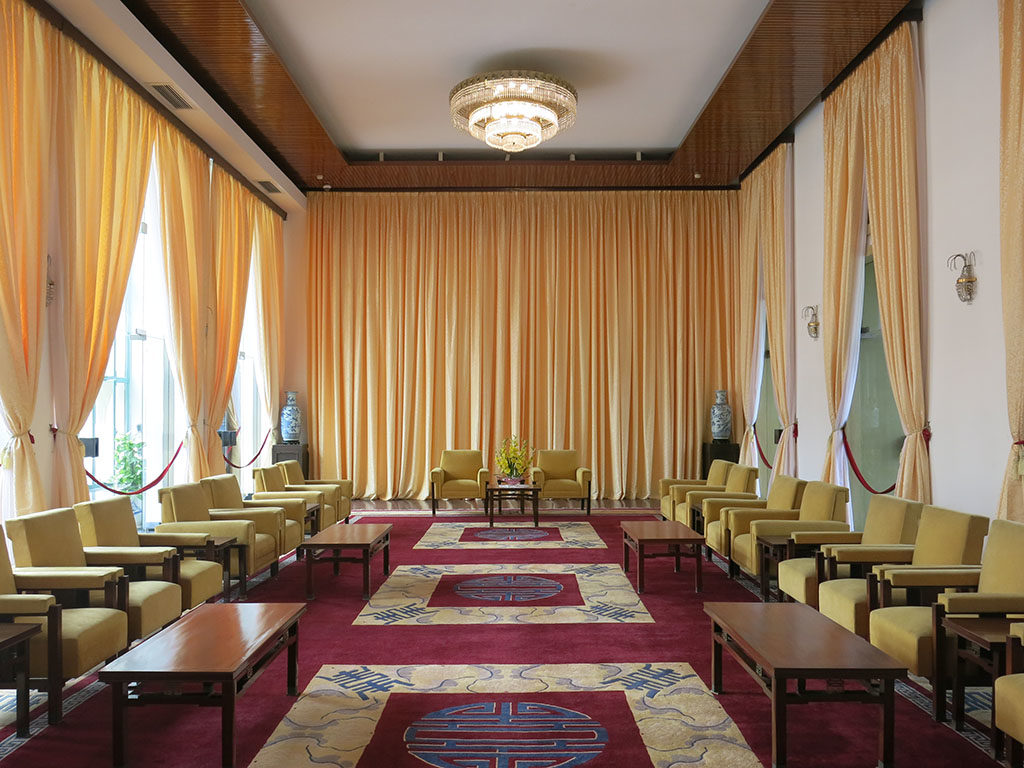 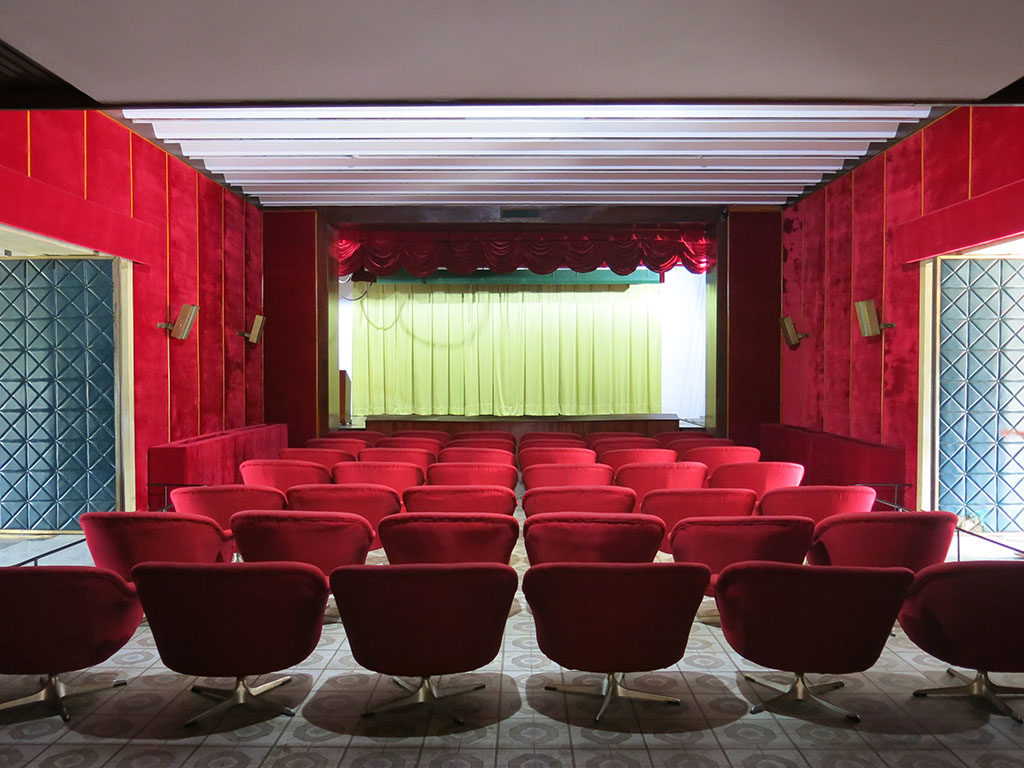 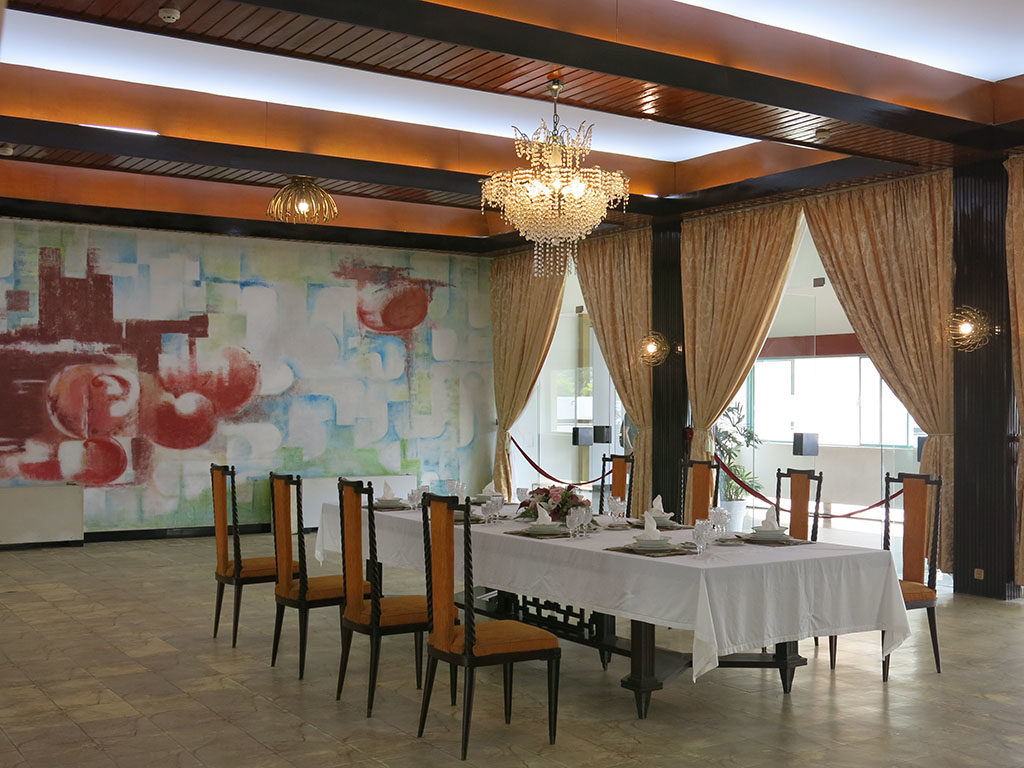 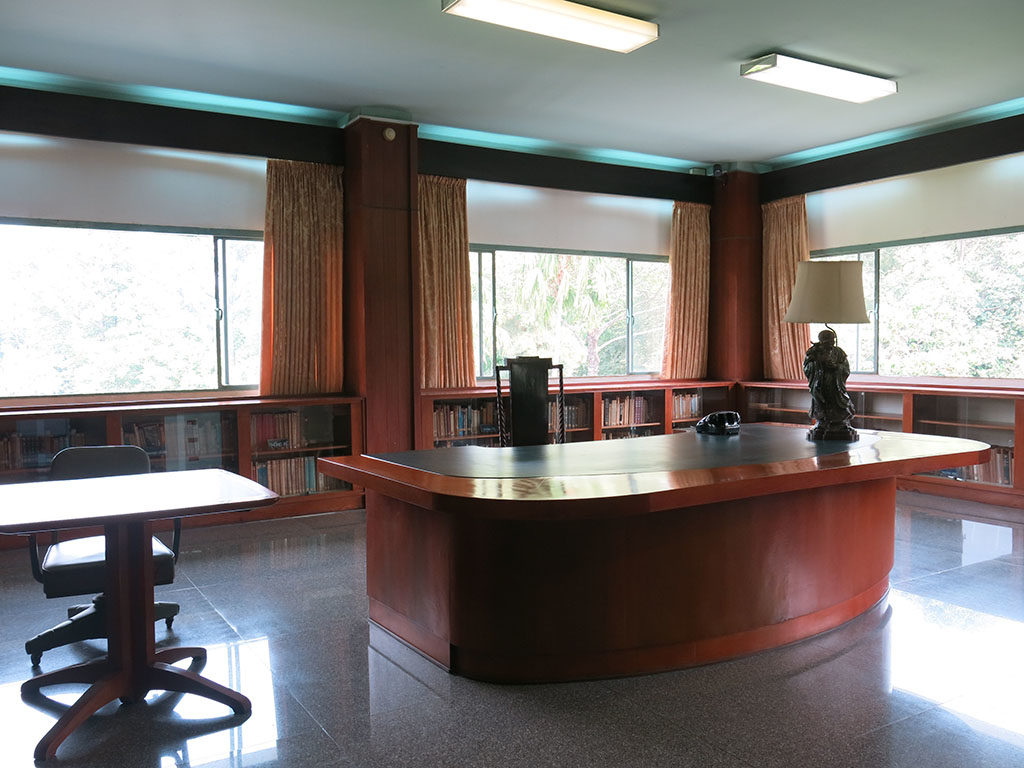 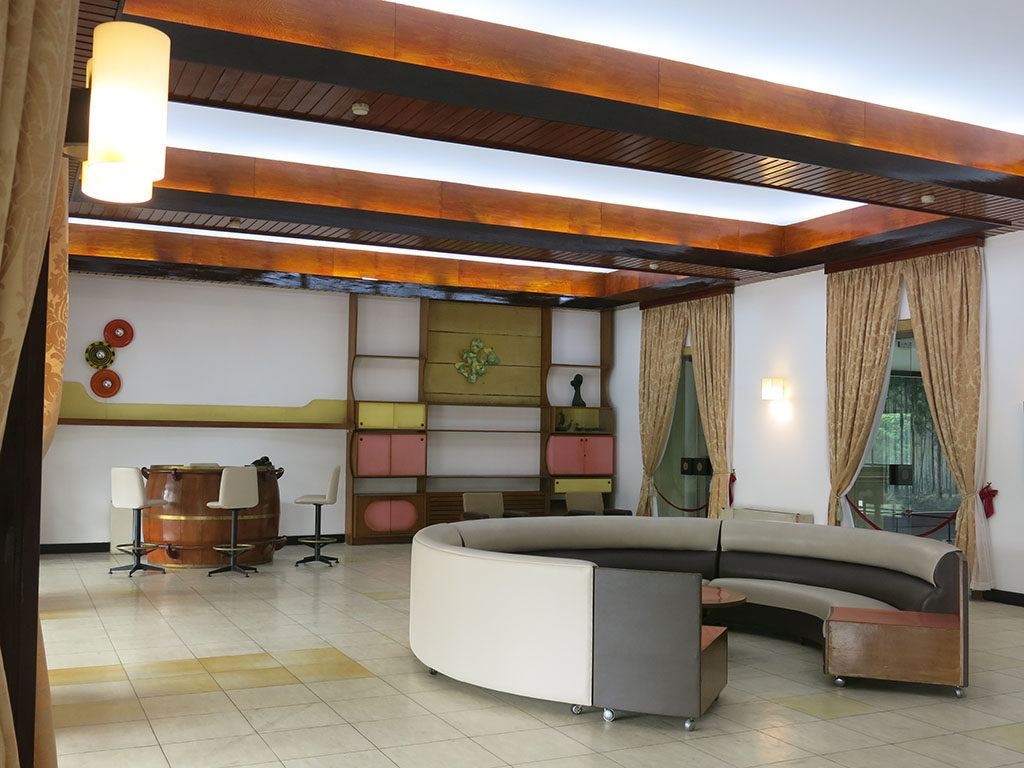 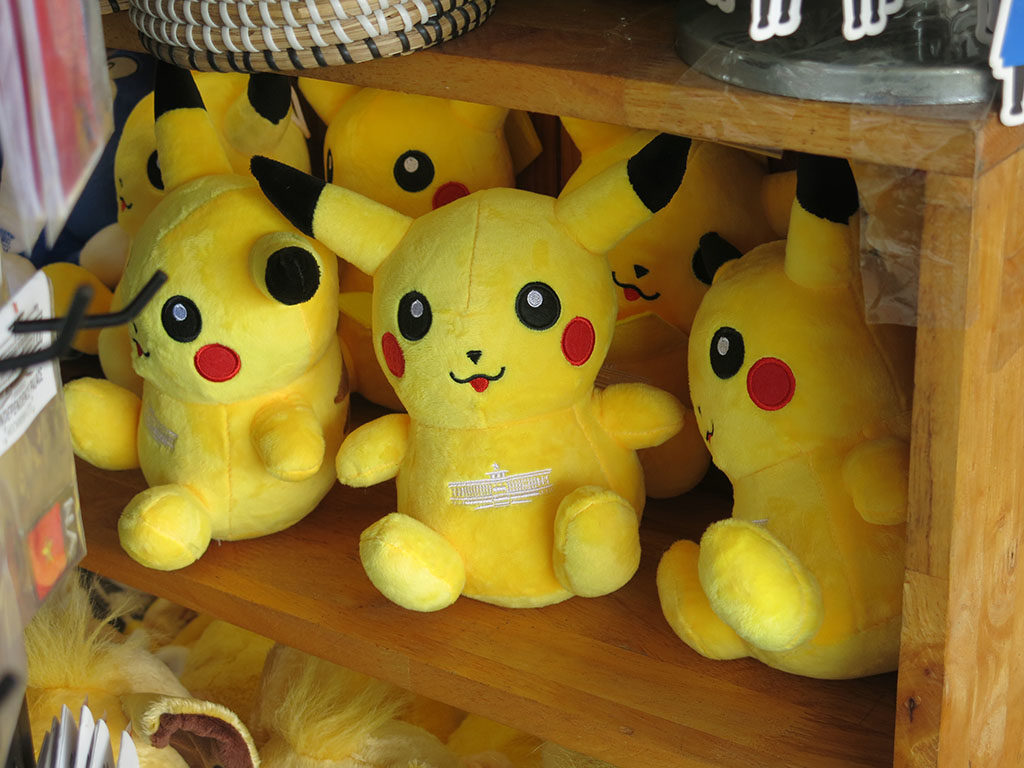 A visit to the War Remnants museum was next. Outside was a collection of vehicles which was quite cool, but also there was the evidence of the tiger cages and various torture devices. Some of that part was a little confronting, especially the accompanying photography. Indoors upped the ante though. Comprising mostly of photography, it was quite a horrific journey through the war and its impact. I can’t say it’s a great idea when you are a bit tired and jetlagged. The importance was without question, but not sure I really wanted to see quite a bit of it. 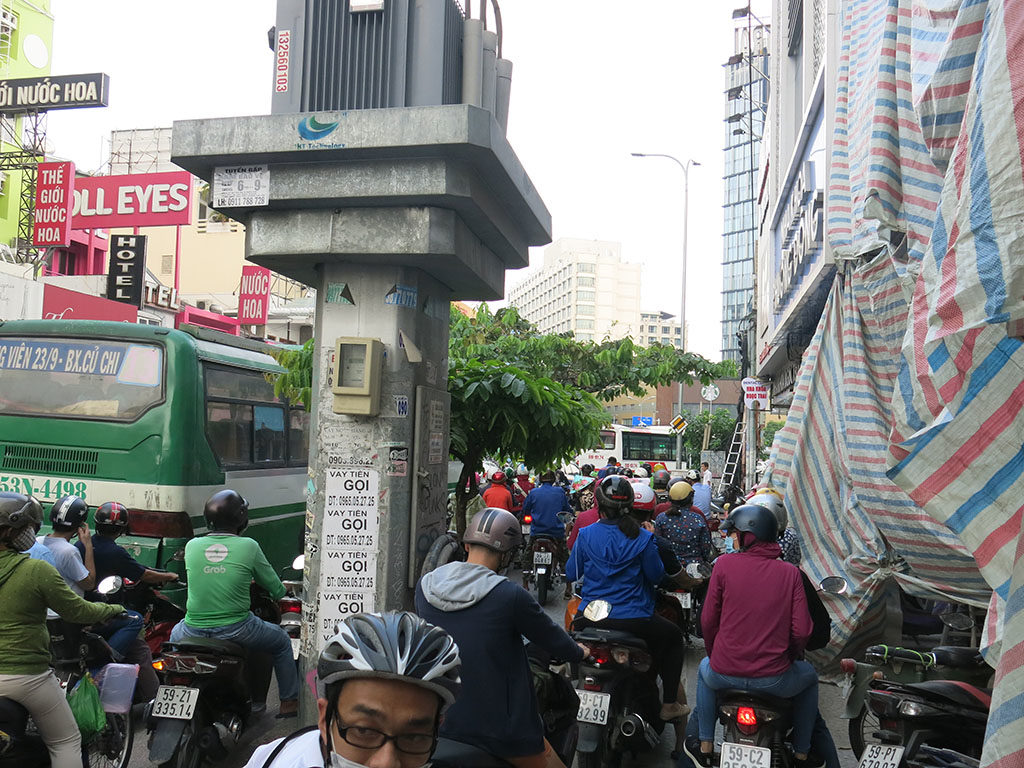 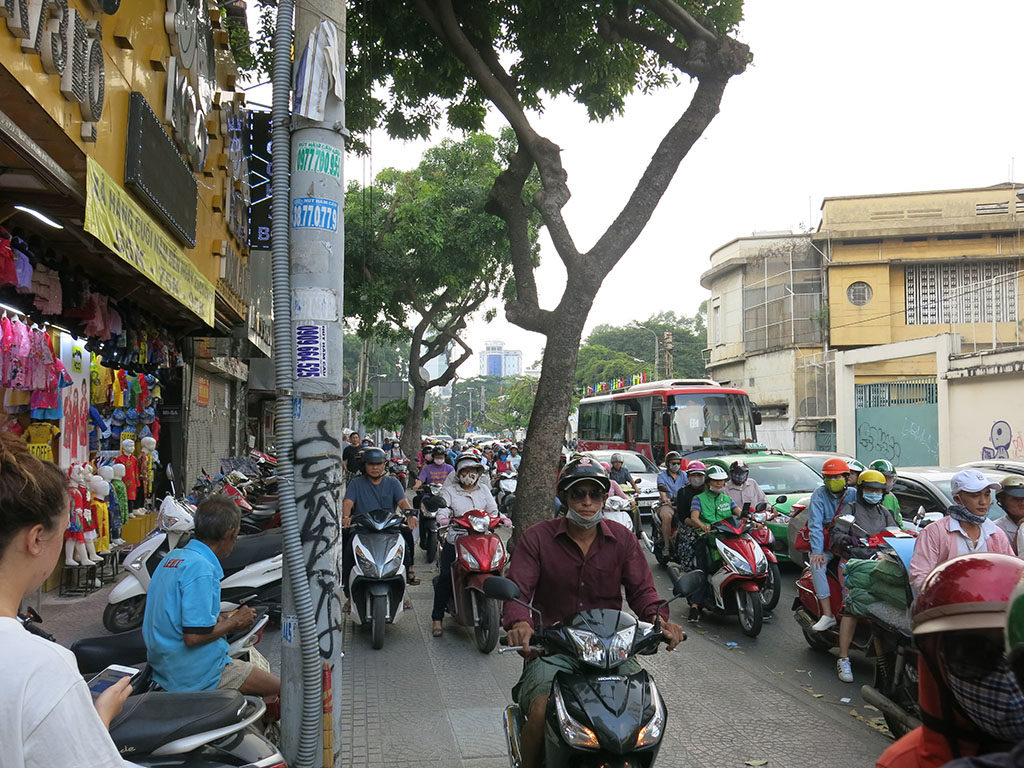 It was now late in the afternoon and so back to the hotel for an hour rest before meeting the group. On the way I had to contend with the Saigon traffic. As it turns out, the sidewalks are really for motorbikes, not pedestrians!

After some rest at the hotel it was time to meet up with the G Adventures tour group. Turned out to be a group of 7 on our Indochina Cycling adventure, although only 5 of us could make the initial meetup. An eclectic group of myself, 2 American gents, a Dane, a German, and then 2 British gals yet to join us. Chamnan was our Cambodian guide and as I expect from G Adventures, a delight to meet.

Dinner was casual, off to the nearby food market. TOO MANY OPTIONS!!! Had a Hanoi dish, Bun Cha, which was pork and noodles. Yuuuummm.

The rest of the evening was great fun, as we watched Vietnam in the football Asian Cup. They got a win in penalties. Exciting!