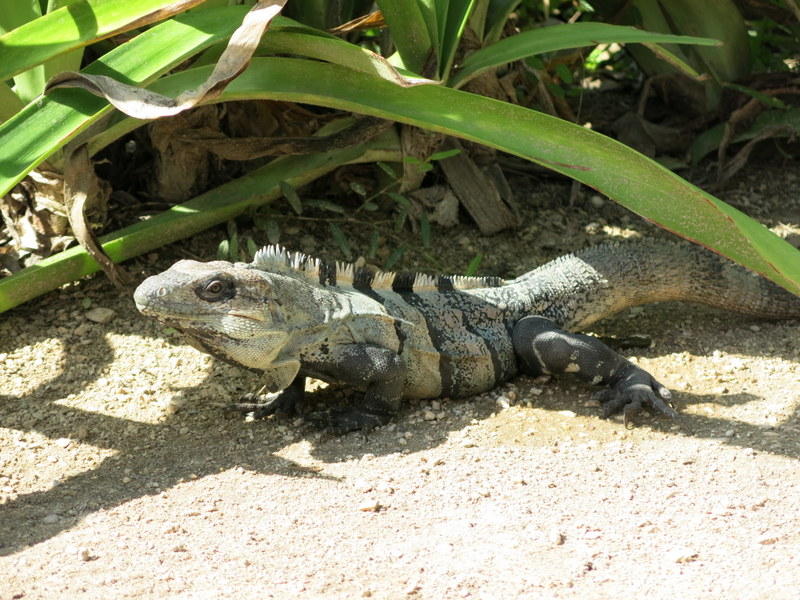 One of the friendly locals

Sadly, today was our last real day with the tour and of our Central American journey. It meant saying farewell to people we had shared the last few weeks with as well as saying adios to the amazing places we had been and food we had eaten. I don’t think I will get another taco like I have had in Mexico.

Anyway, on to our day. It was another action packed day, as you get a bit on this blog. While it was tempting to chill for the day in Playa, how could we when we knew there was so much else to see and do outside of town? Deiber was again a champion today, organising a private van for a bunch of us to squeeze in as many activities as we could. So on the agenda was more ruins, more cenotes, and more sea turtles. Win! 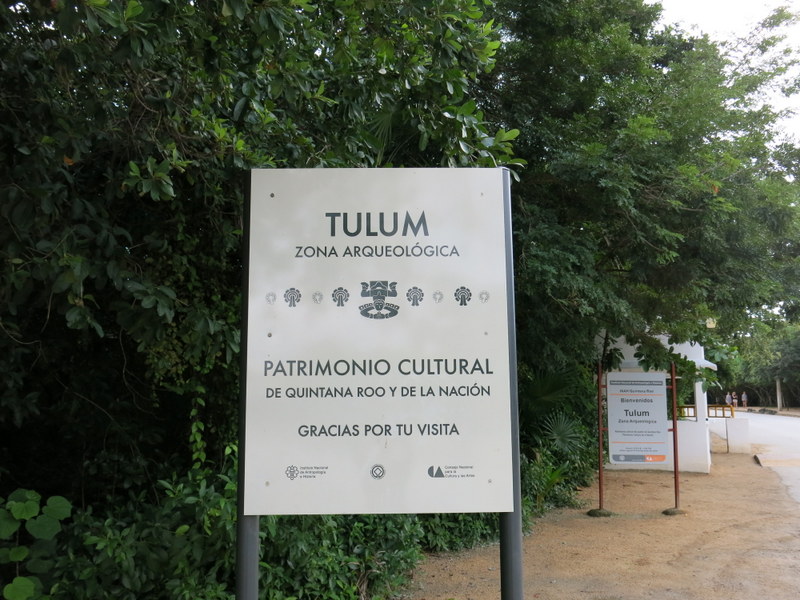 First destination was to the Mayan ruins of Tulum. Now we had seen our share of ruins to this point, but Tulum had something the others didn’t… a seaside locale. 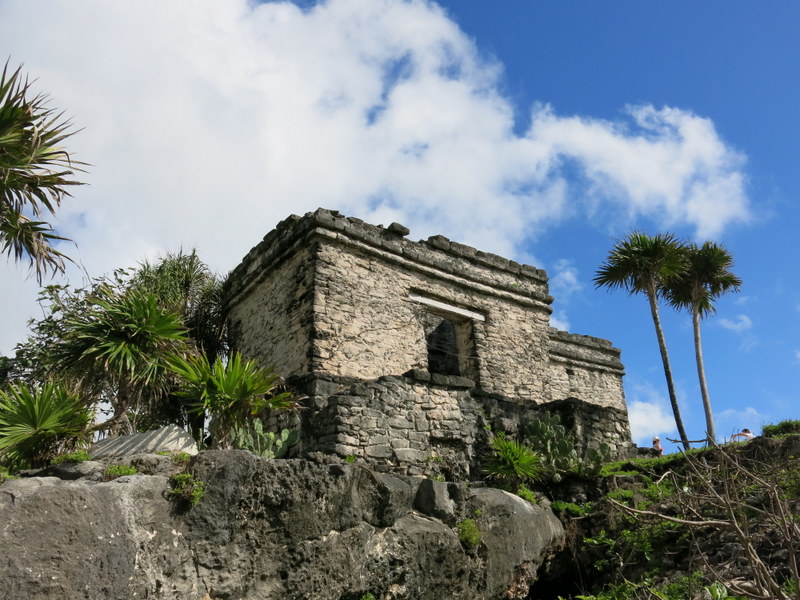 Dramatic ruins on the cliffs

So off we went and we arrived about an hour later. First thing was the the number of tourists here was heaps more than the other sites we had visited. It was a little odd given that it had none of the prestige of the other places we had visited (especially nearby Chichen Itza), however it made sense as it was a short trip to these from nearby Playa and Cancun, meaning those folk enjoying a sun and beach filled holiday can get a taste of ancient culture. 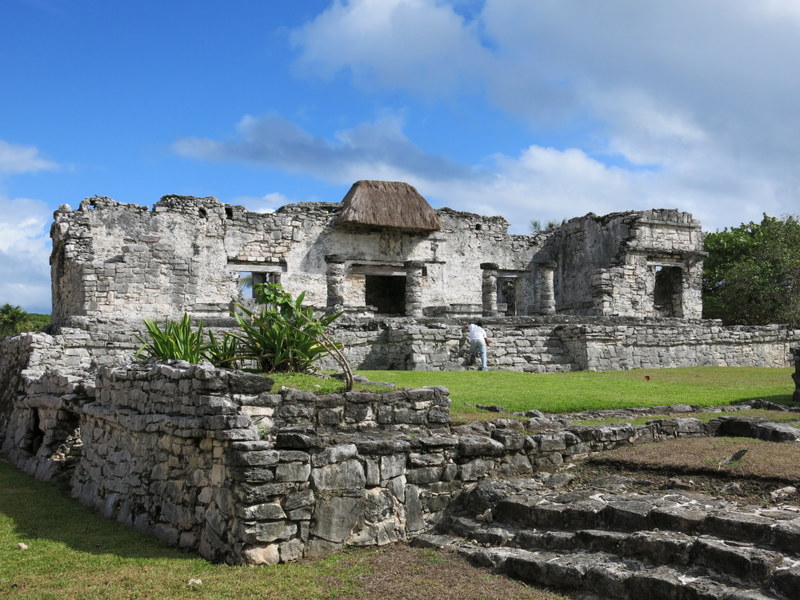 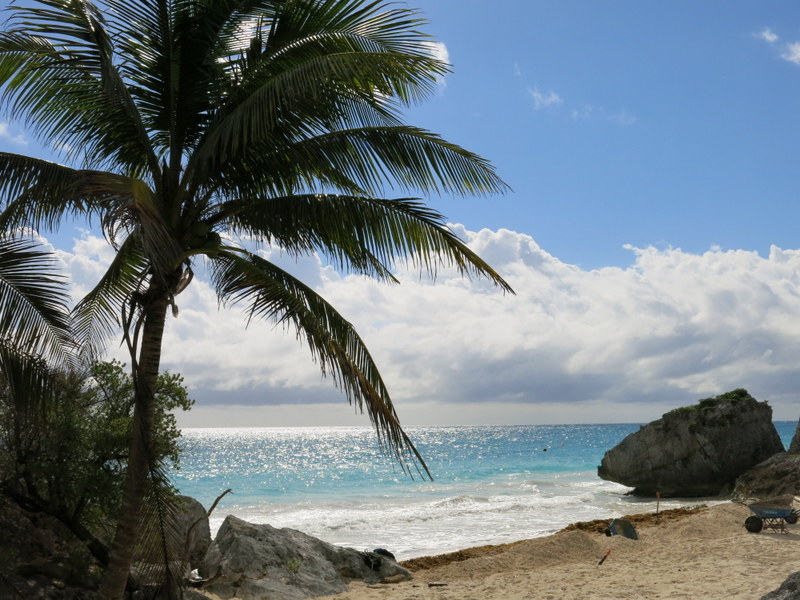 Those Mayans sure knew where to build things

Joining the throng, we spent an hour and a half wandering the site. Much smaller than the other we had visited, it was still great due to the dramatic coastal location. These were clearly the Mayans who knew about “location, location, location”. 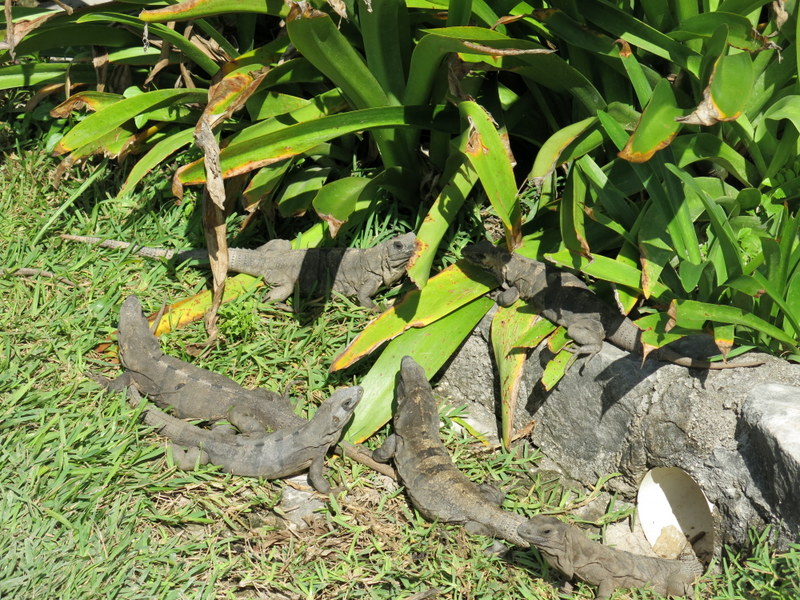 Saying hi to all the tourists

This was also fun as we were rubbing shoulders with big numbers of iguanas, casually wandering around, and clearly used to the tourists. They were happy just to hang out and were not disturbed by us tourists putting cameras in their faces. 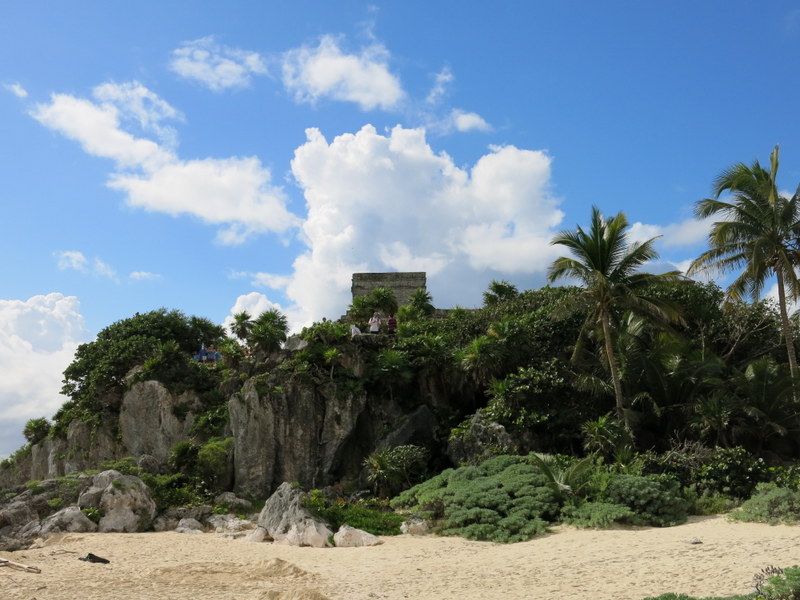 This was also the nicest site to just sit back and relax, with lots of shady grassy places to just sit and soak up where we were. It was glorious. 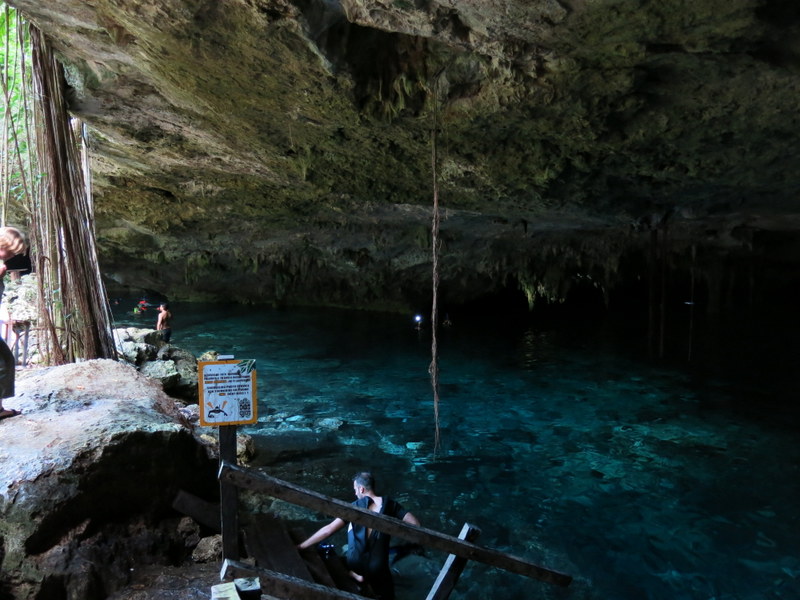 But we couldn’t do that all day. Instead it was time for our next stop… cenotes! If you remember we had a ball at some ceontes early in our trip. In just 10 minutes we arrived at our swimming hole and it was incredible. In fact I thought it was quite a bit more picturesque than our first ones we went to. Much more crowded, but many places to explore, as we could swim amongst stalactites and stalagmites (I hope that is geologically accurate), into small caves, and see more fish swimming with us. 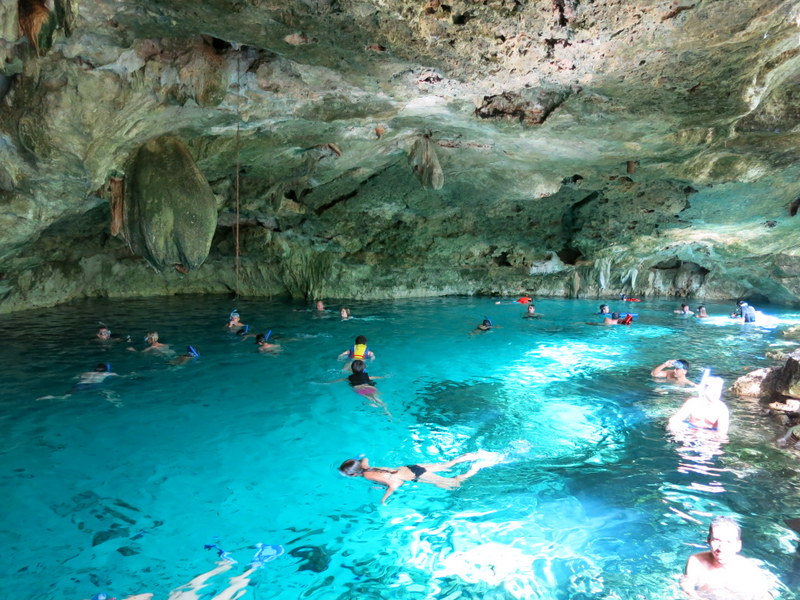 There were a number of cenotes there, all interconnected by a cave system. We weren’t that adventurous, however many scuba divers were and it was weird to see the odd light and frogman underneath us as we swam.

After an hour we had enough, so it was back in the van to our final stop… chasing sea turtles! I was super excited for this, as it was a chance to see more of the little fellas from when we were in Belize. This was a different experience, as rather than boat out, we could swim out from shore.

Again, this was a very bust beach, but it seemed to be the norm in this part of Mexico. That didn’t stop Kate and I getting out there in the water, and finding a couple of turtles to ourselves, which we followed for a while. It was so relaxing to gently swim after them, watching them graze on sea grass and come up for air every now and then. 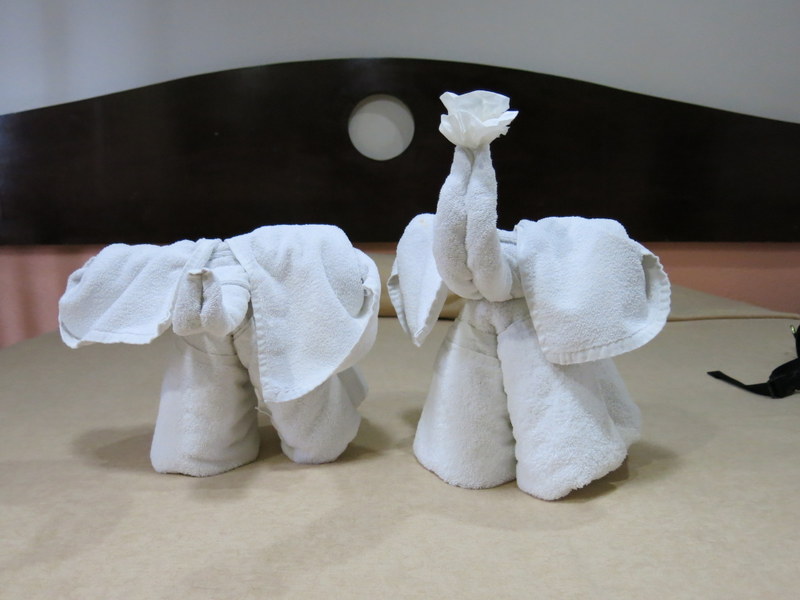 Elephants to greet us in our hotel room this time

It was already 3pm, and it was time to head back to Playa del Carmen to wind down. And we had impeccable timing. As we drove back the heavens opened and the rain came down. And came down. And did not stop.

In fact from this point on, blue skies were gone and replaced with torrents of rain. The rain gods were saying farewell.

After a quick run to the bus station to organise airport transport for tomorrow, as well as a cheeky street taco, it was the sad occasion of the farewell dinner. Again, it was a bittersweet occasion. Nice to be with new friends, but sad to say goodbye. It was especially sad to say goodbye to our new German friends Joern and Iris who had been with us since day one in Cancun, and our trip leader Deiber. He was unbelievable. I know it is the job of the leader to make sure everything goes to plan, but he constantly stepped above the call, and to cap it off was one of the nicest guys you would ever meet. Kate and I were super lucky. 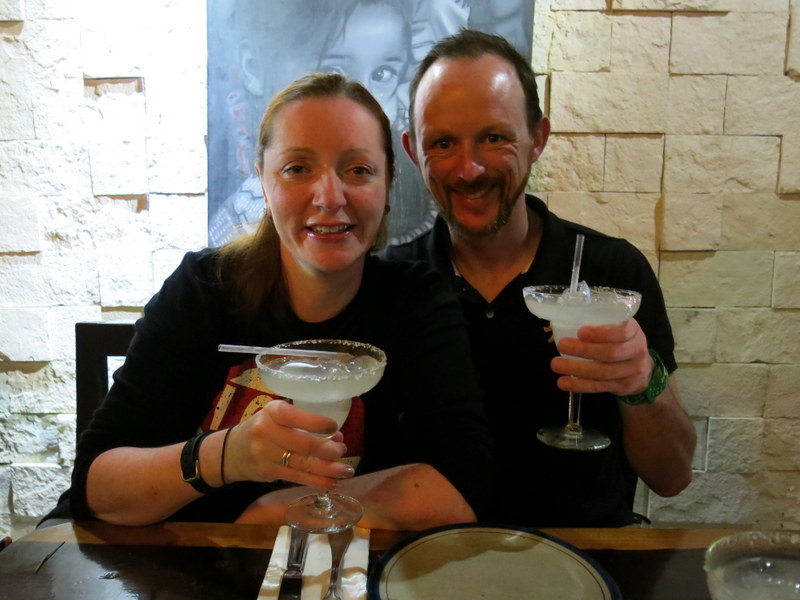 So after a last Mexican dinner and lots of hugs it was time for a final drink with some of the crew and off to pack for our journey back to the US tomorrow.