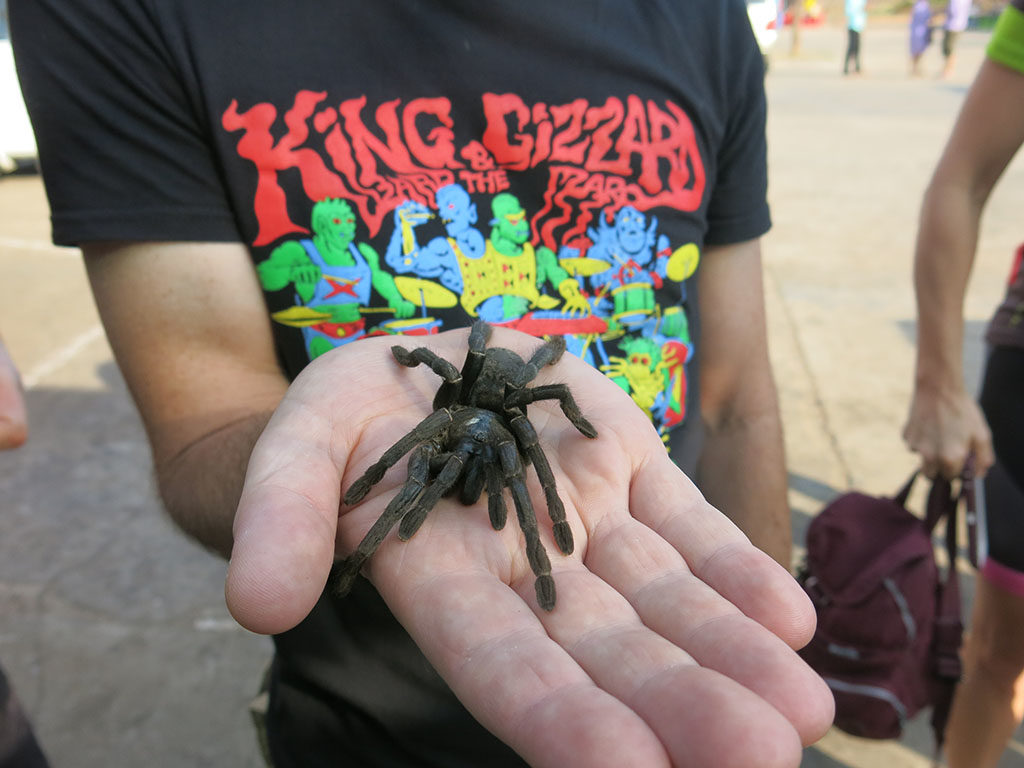 Today was our longest travel day… a bit of riding in there, but quite a bit of bus action as well to get us out of Phnom Penh and off to Siem Reap, our final destination on the trip.

It started with some bus travel for about 1.5hr out of the city, where we made our first real stop, and one I had been looking forward to all trip… the Spider Village at Skuon! This is fairly notorious for visitors to Cambodia. Where else will you get the chance to not just hold large furry spiders, but also eat one? The eating of spiders (and grubs and bugs) came not from novelty originally, but necessity, when food was scarce and the previous regime in full power. 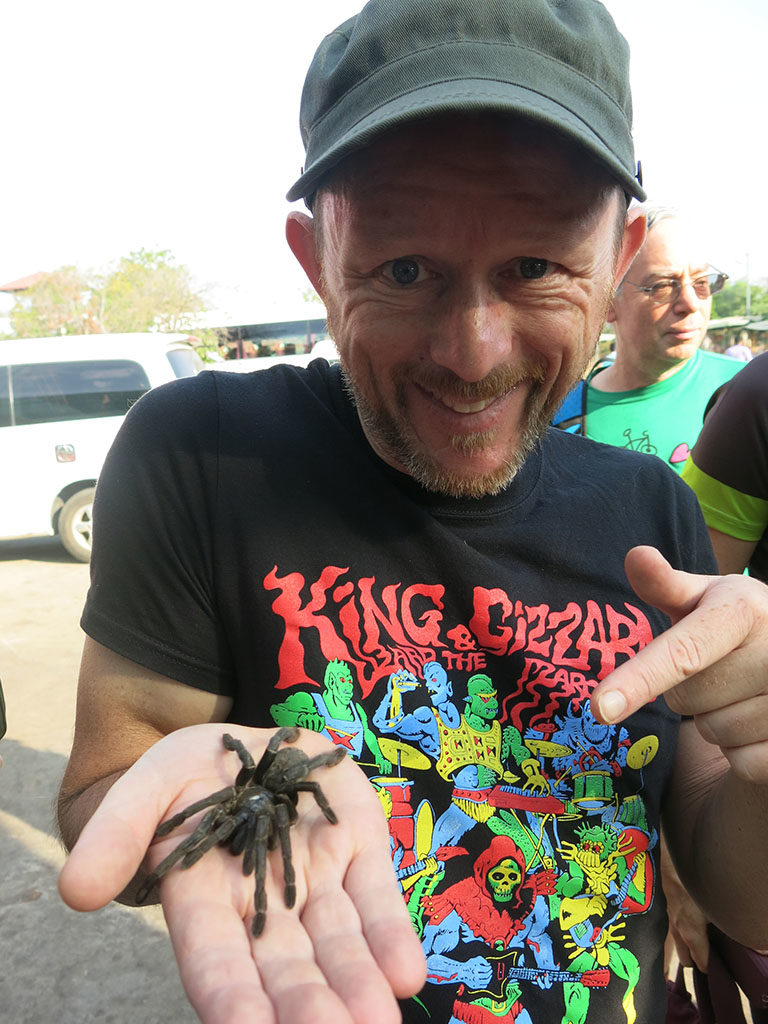 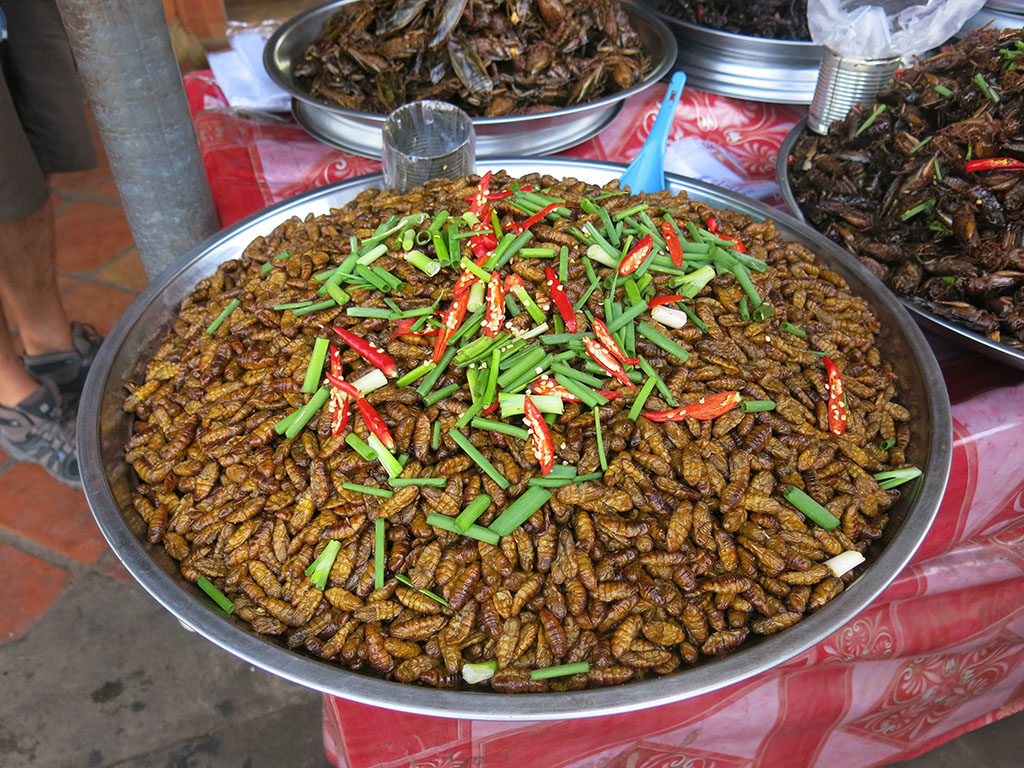 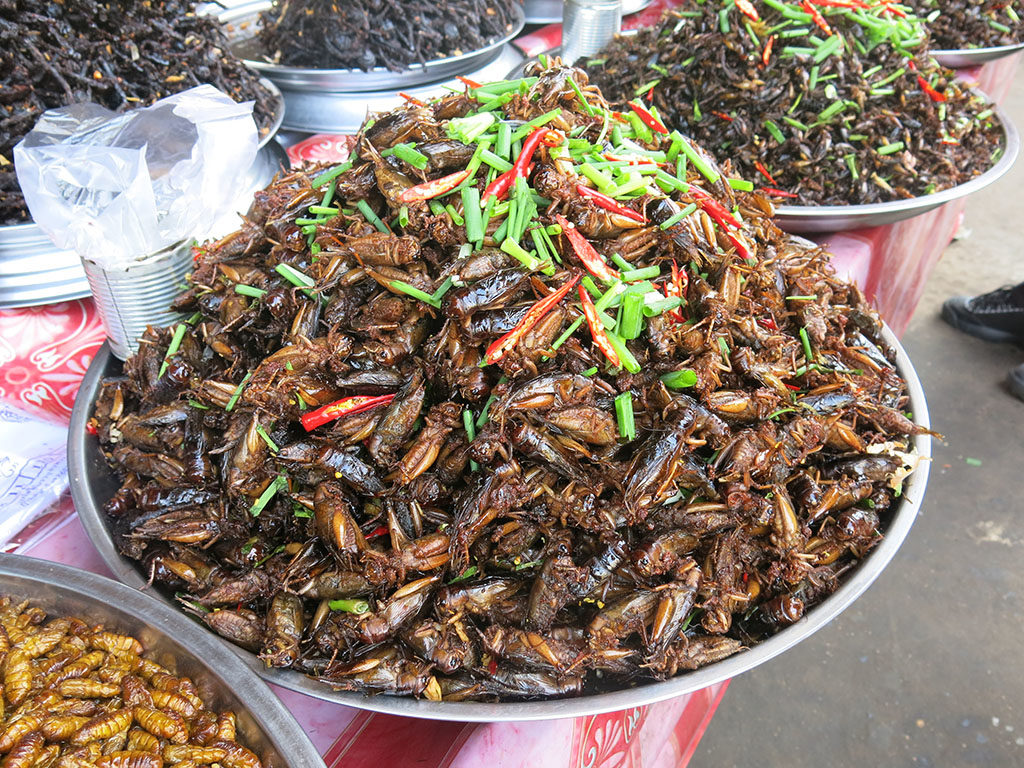 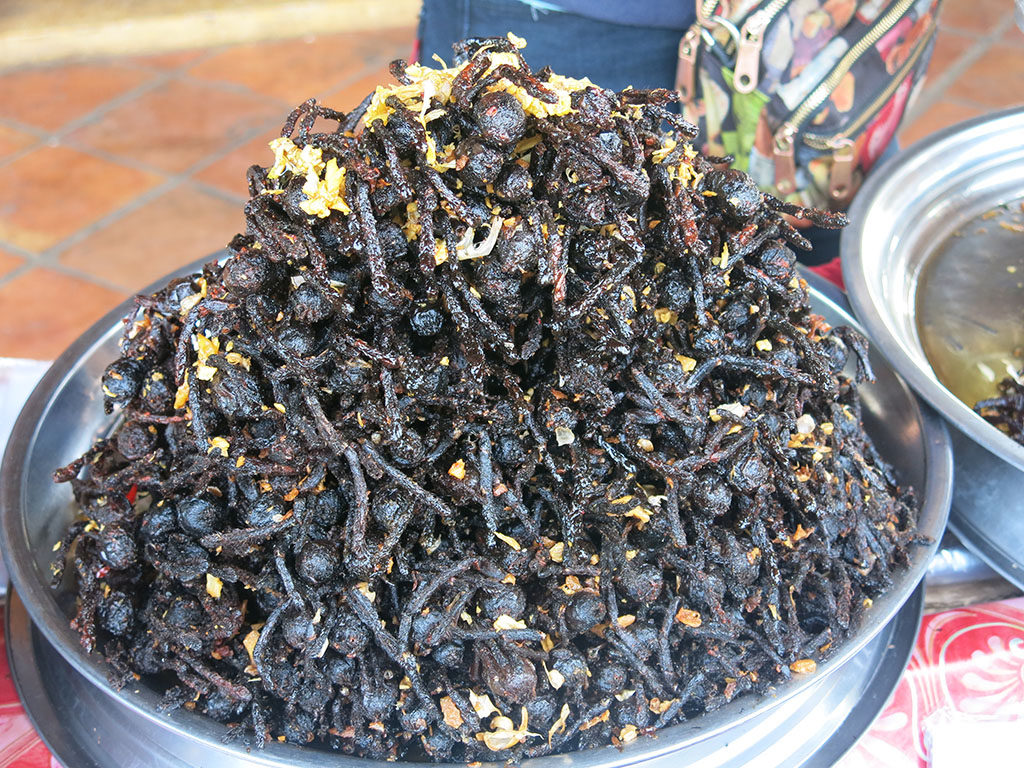 So playing with and eating spiders? I was up for it! When you arrive many small children run up and will plonk spiders in your hands or on you. Most visitors shoo them away, but I was fine to hold a spider or two. We had a little time to wander the market. Cham looked after getting us some tasty treats for the bus, but it was fascinating to wander the market and see all the good eating on display! 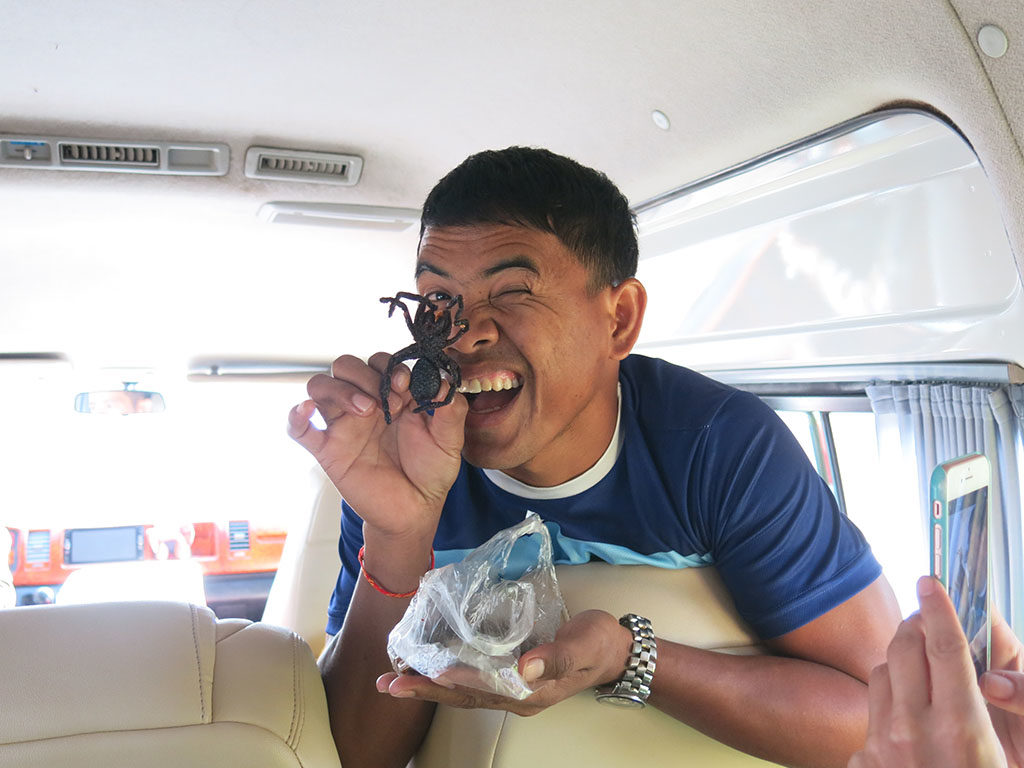 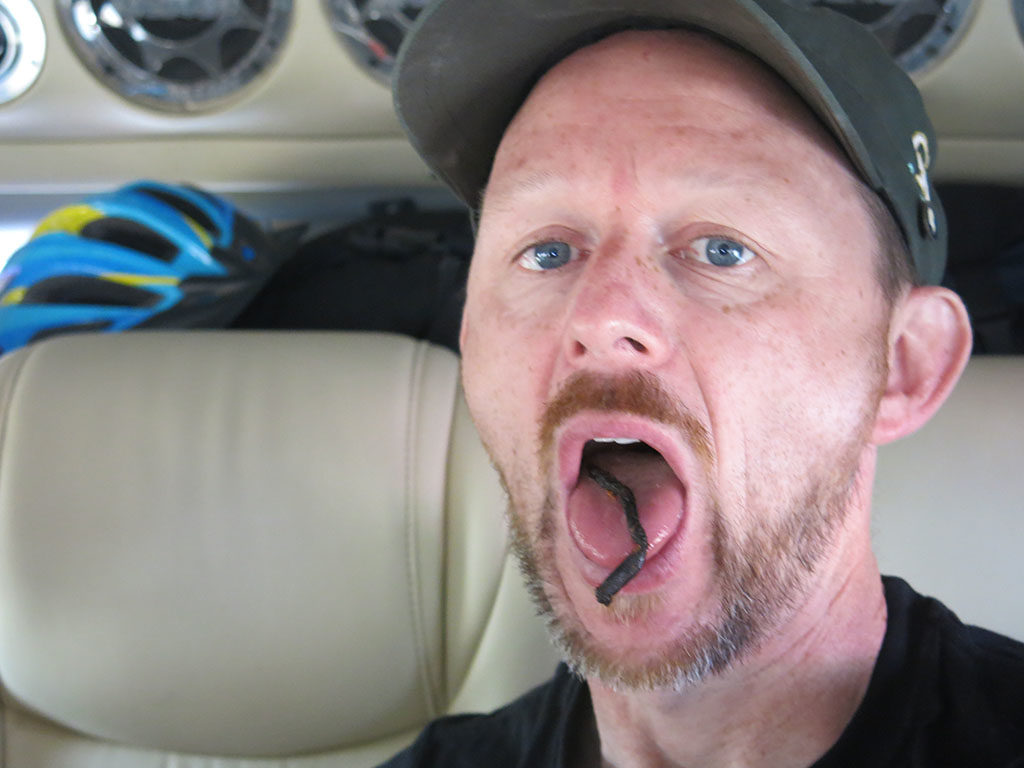 When we got back in the bus, Cham offered up some goodies to whoever was keen. Most of us were willing to give it a go. The crickets were best for me… crunchy with some OK spice to them. The spider just tasted like deep fried something, and the grub was a little odd in texture. But all were fine. Not sure I would go back for much more though!

Another 1.5hr in the bus before we got a chance to get back on the bikes. When we started cycling it was very different countryside. The tracks were predominantly very dusty red roads, quite a contrast to Vietnam. It was some casual riding before stopping for a set lunch. Food in Cambodia was much more rice and curry than the soups in Vietnam. Nice to dive into some different cuisine. 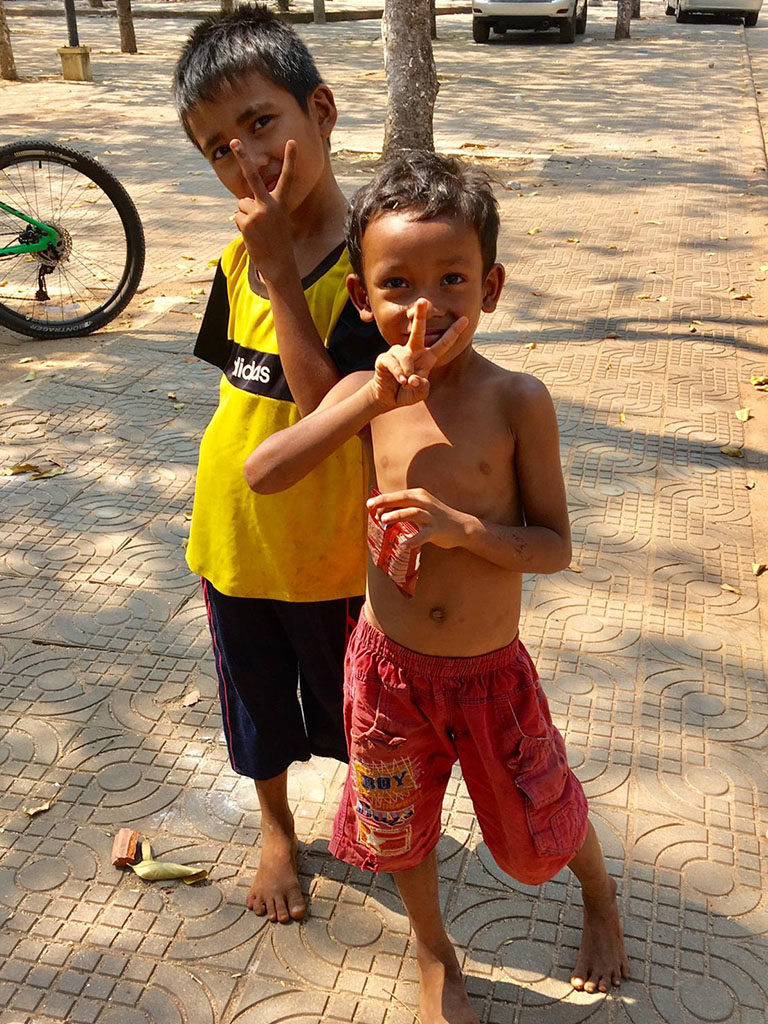 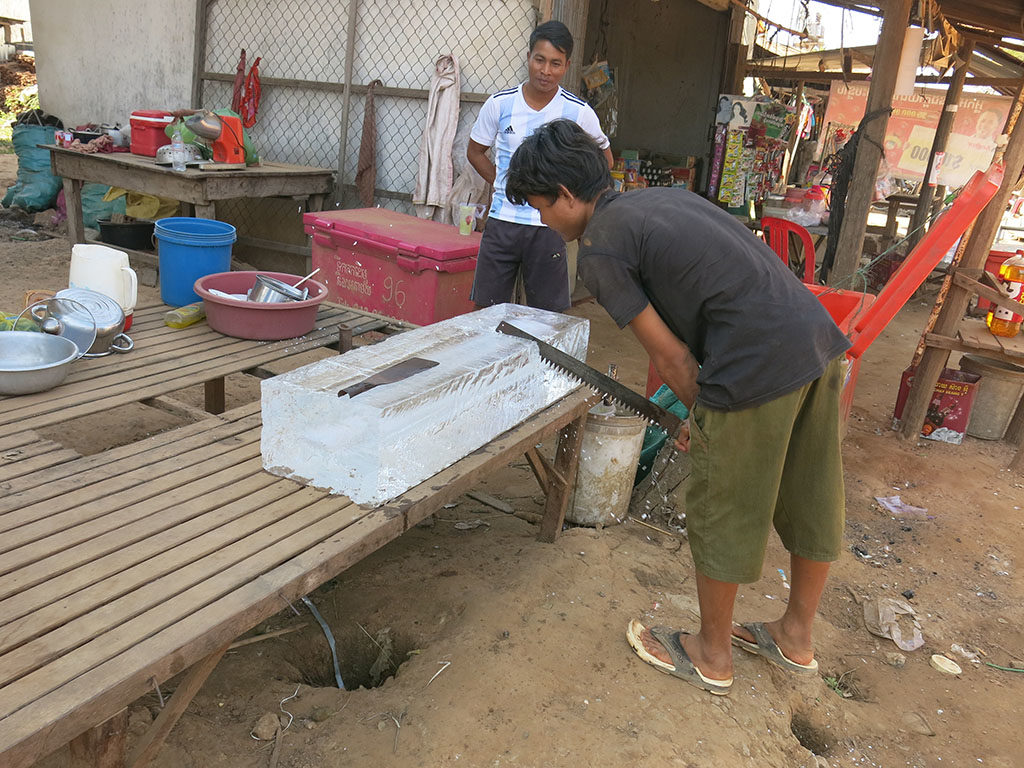 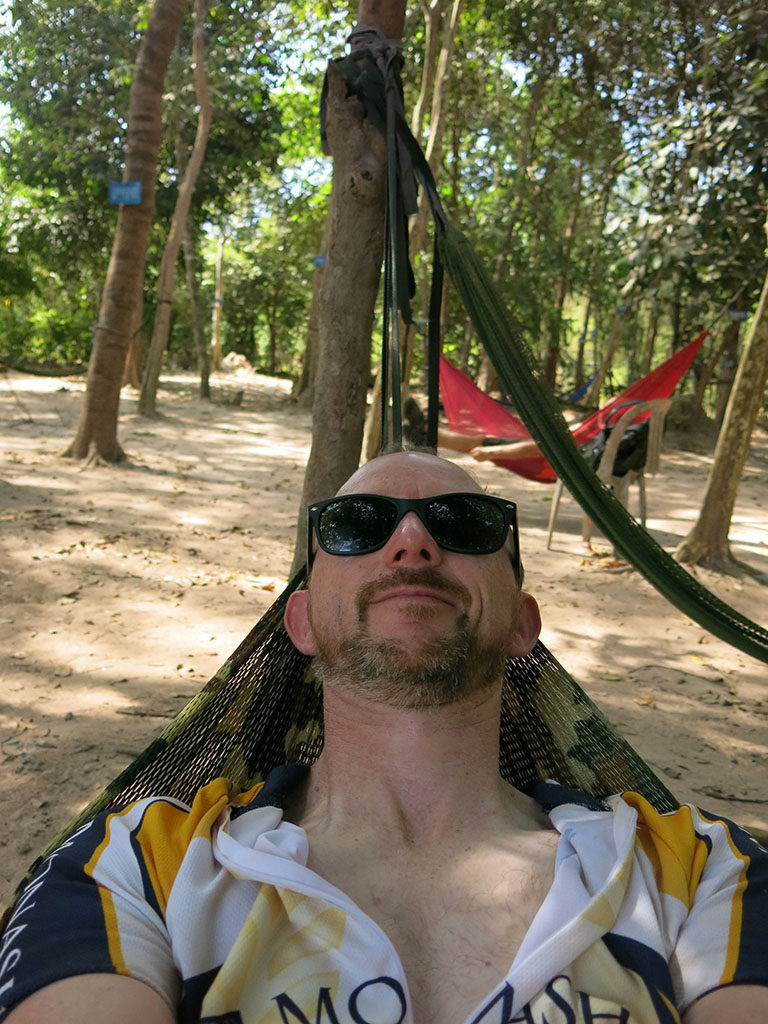 The afternoon held more riding, with unfortunately a minor spill! One of our team came off her bike and managed to scrape up the knees pretty badly! Thankfully all was OK, and nothing that some antiseptic couldn’t get under control. After a bit more short riding (the roads were getting a bit too busy) it was on the bus for 2.5hrs to Siem Reap.

We arrived in Siem Reap, and instantly it felt very different. There were suddenly LOTS of tourists. While we had certainly seen our share in our travels thus far, clearly travel to Cambodia is all about Siem Reap and Angkor. As such, the city reflected that. It was quite pretty in places on the river, and wandering the streets certainly had a different buzz to them. But of course it also had a tourist area called Pub Street with lots of cheap drinking and food. That was fine, it was just the incessant people trying to get you into their bars that started to wear you out. 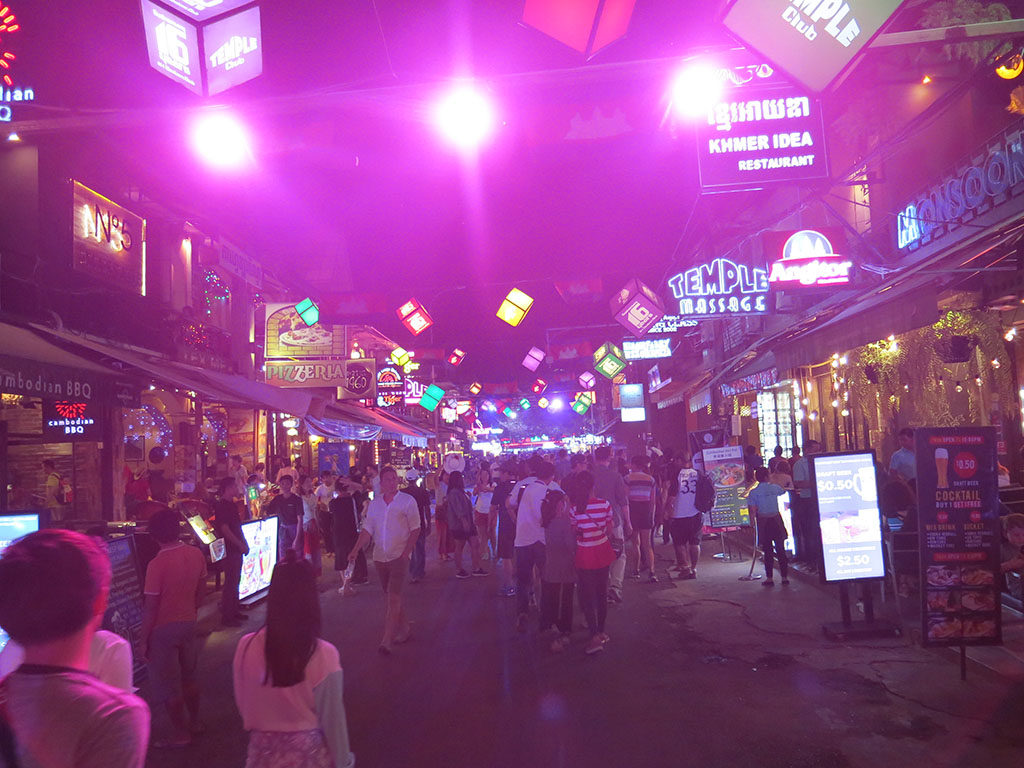 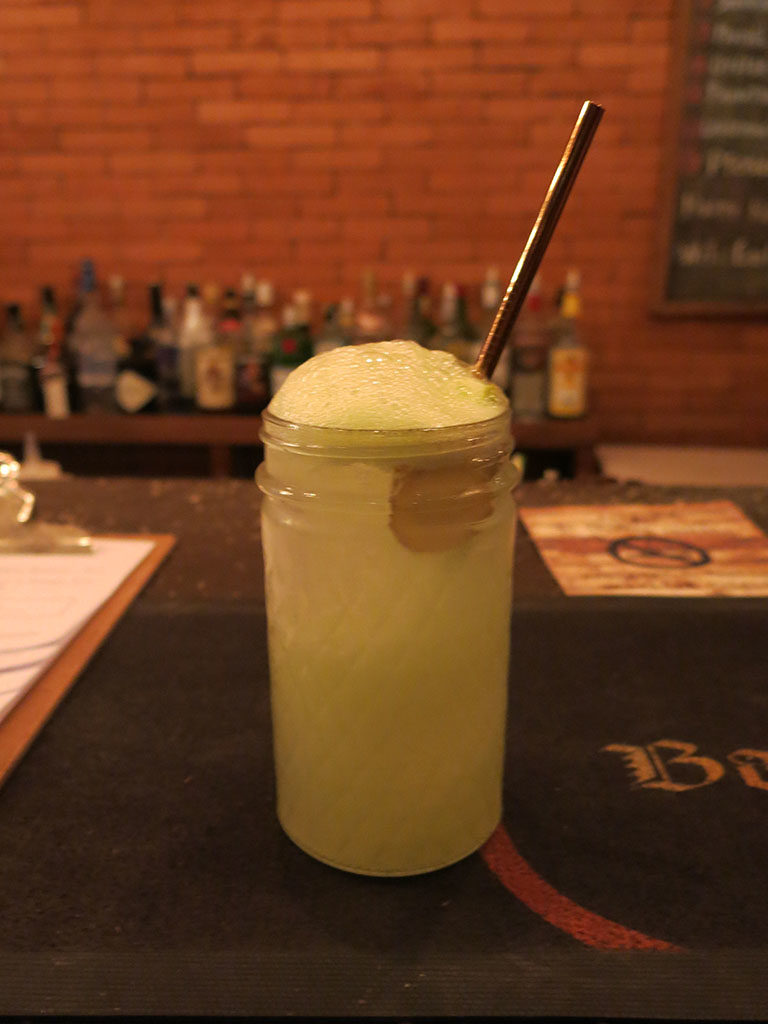 But for dinner Cham took us to a place that was a nice blend of good and cheap food and drink. Of course a 4.5 litre beer tower was in order! We chilled out there, playing some pool, before a few of us found a small bar to play some darts and then back to the hotel for the night.