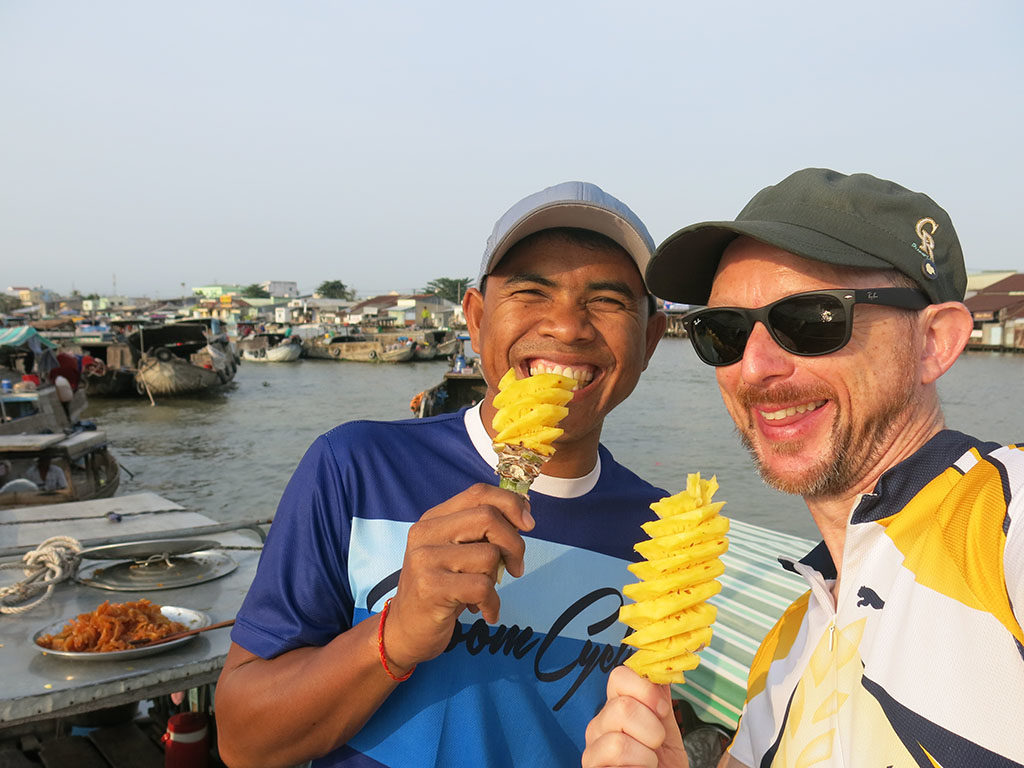 A slightly earlier 6:30am start today, so that we could do some sightseeing of sorts before jumping on the bikes. We jumped back on a boat after our pleasant homestay, taking it back to the main roads via the floating markets. 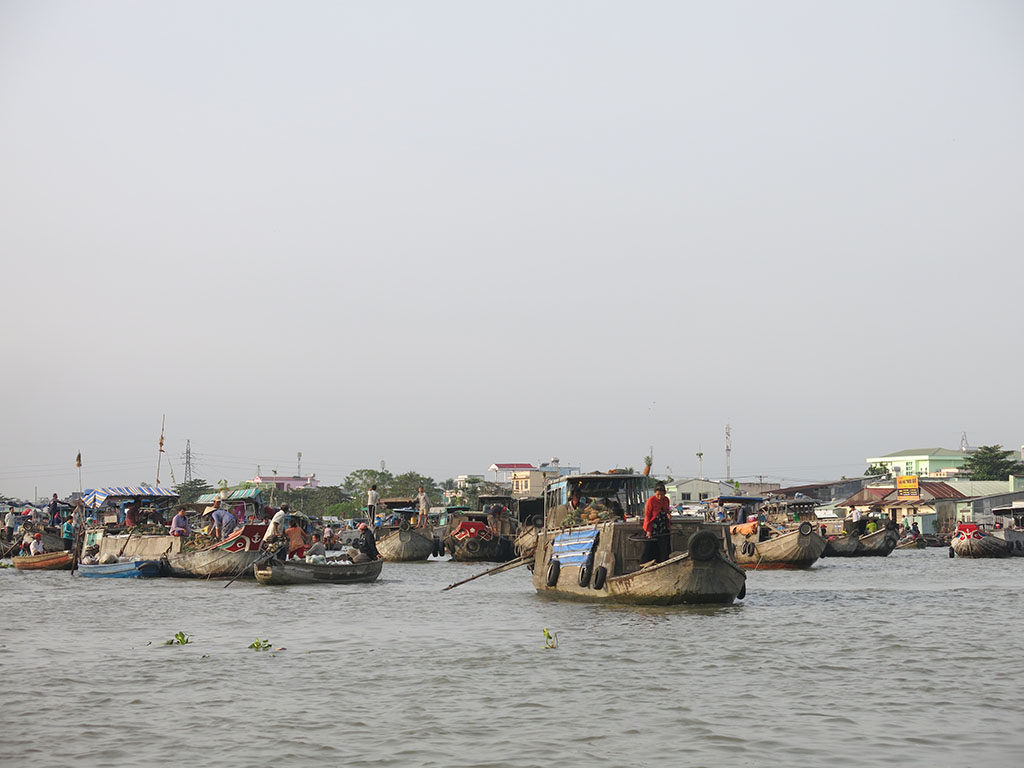 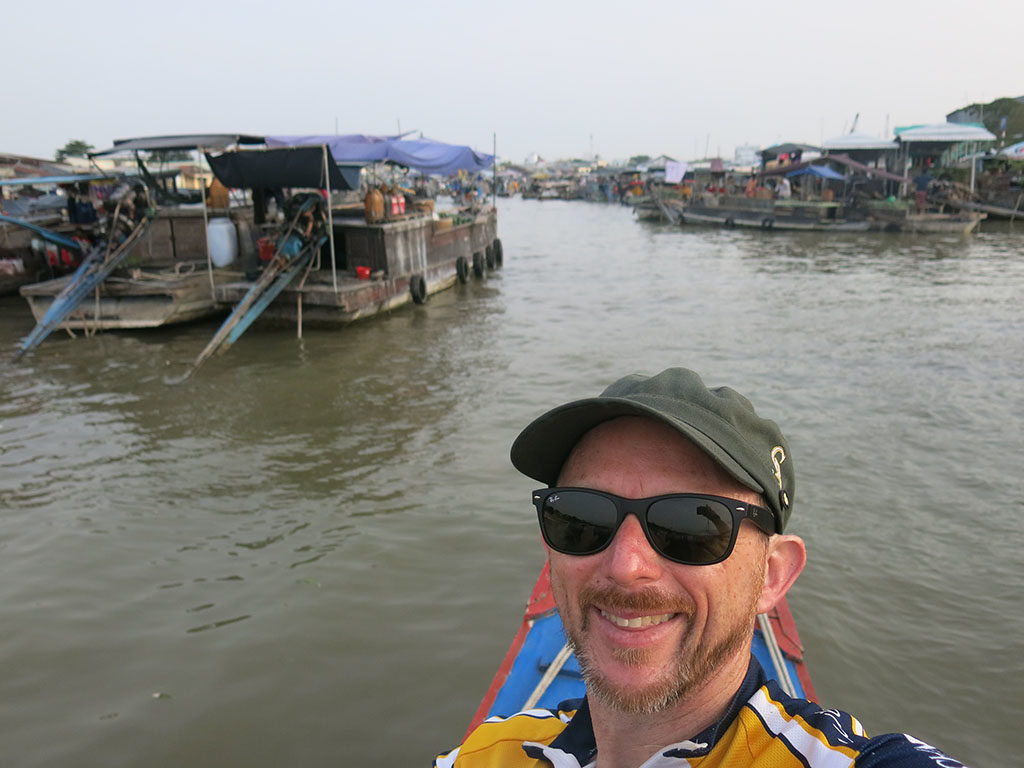 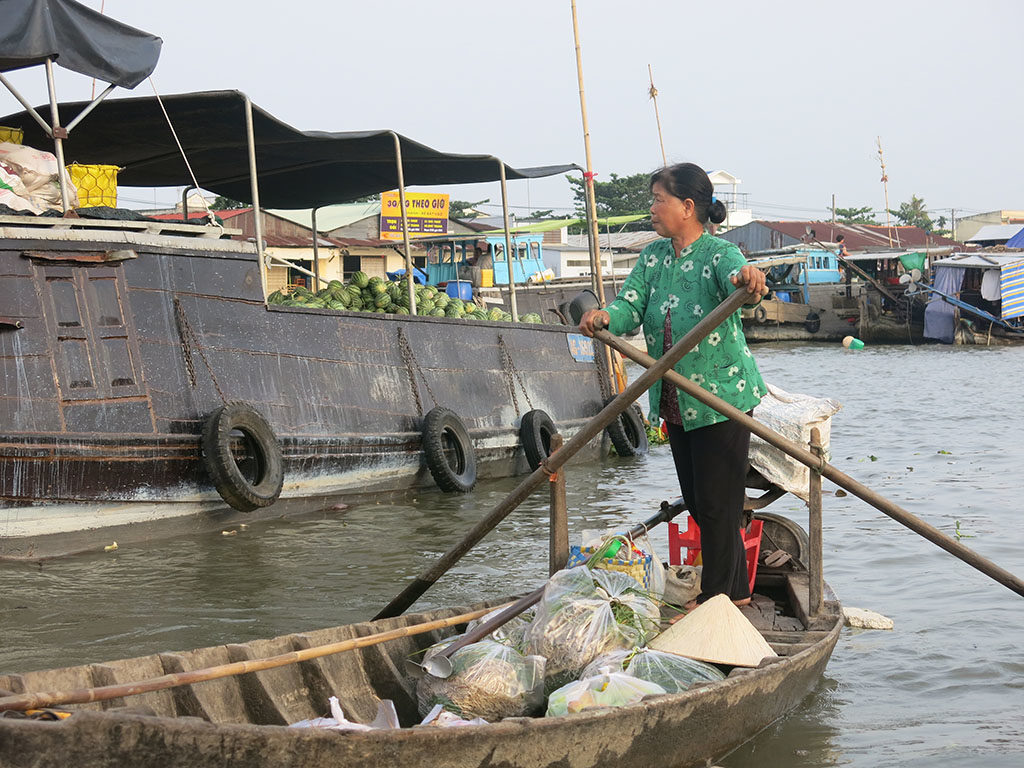 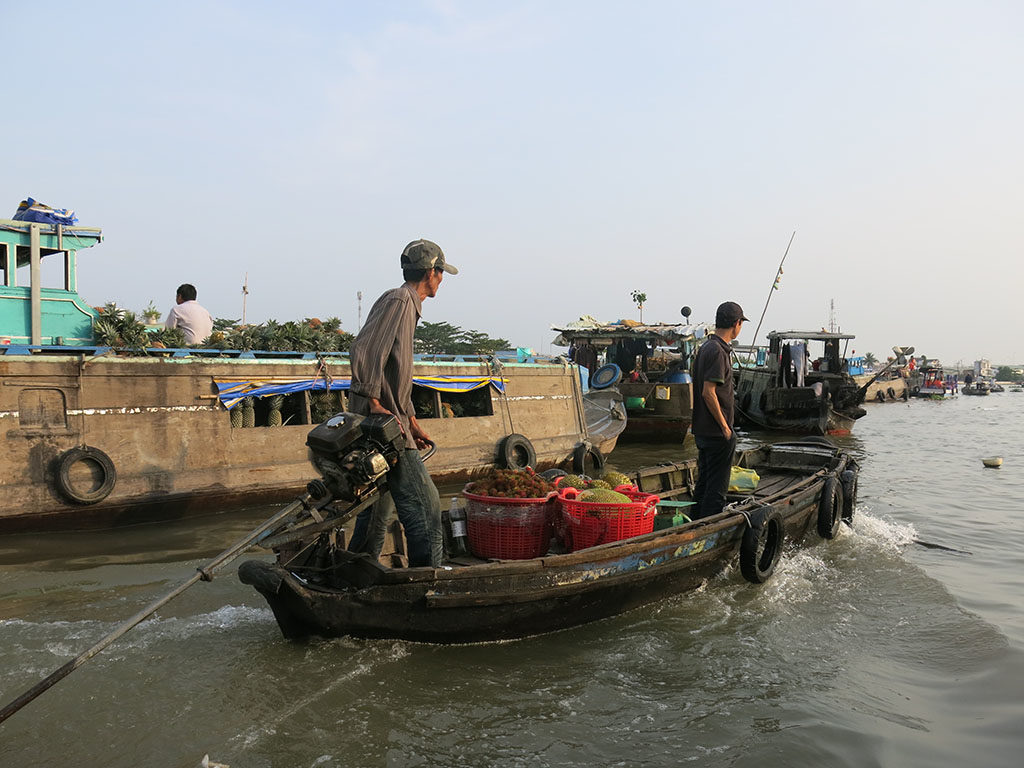 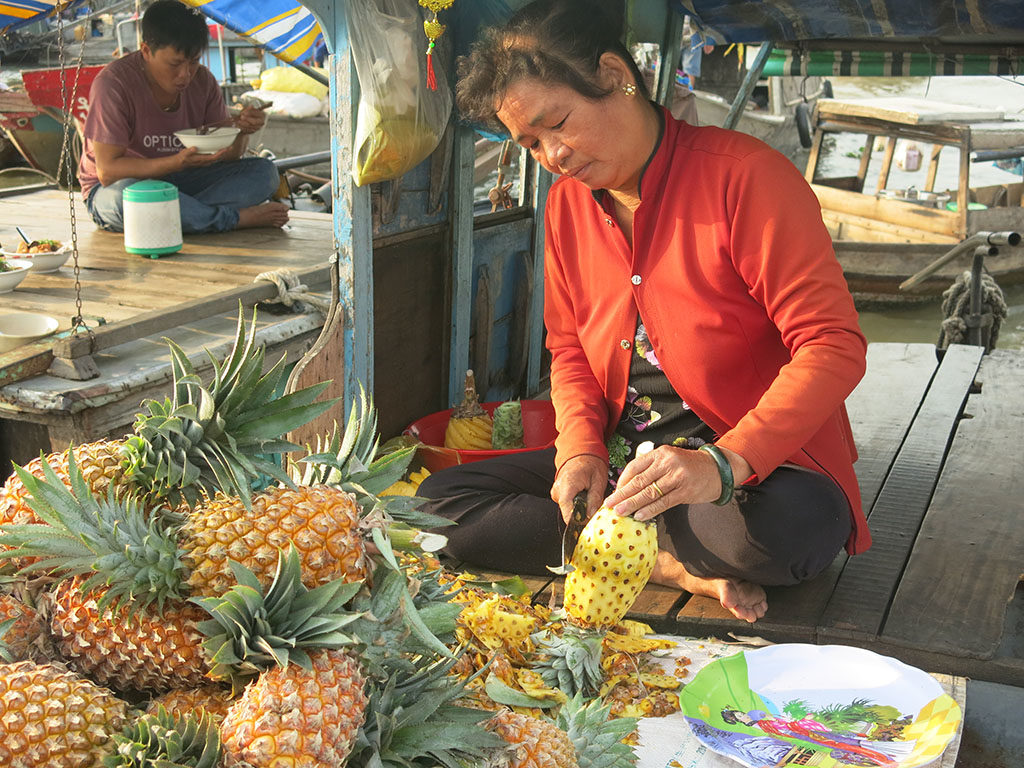 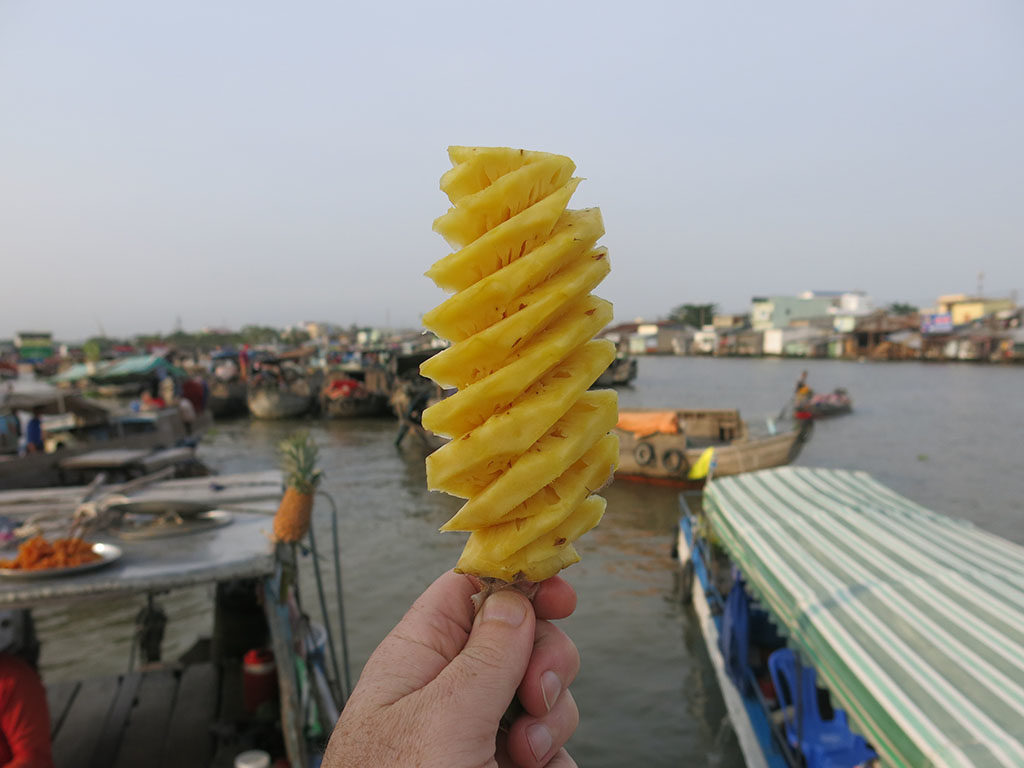 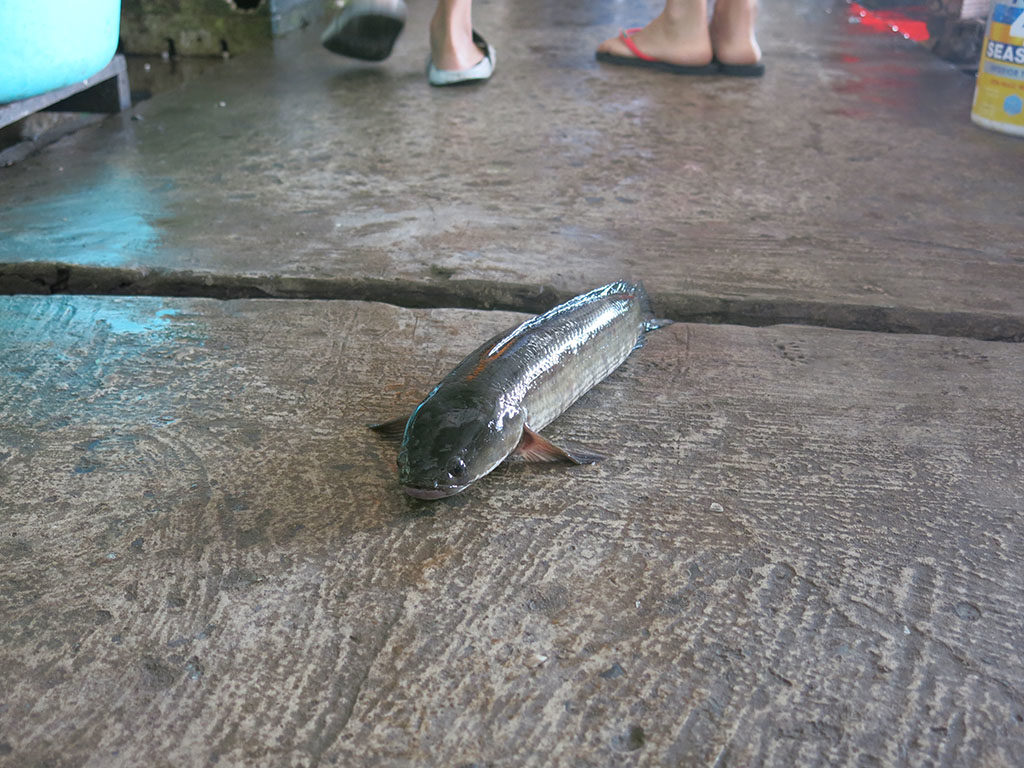 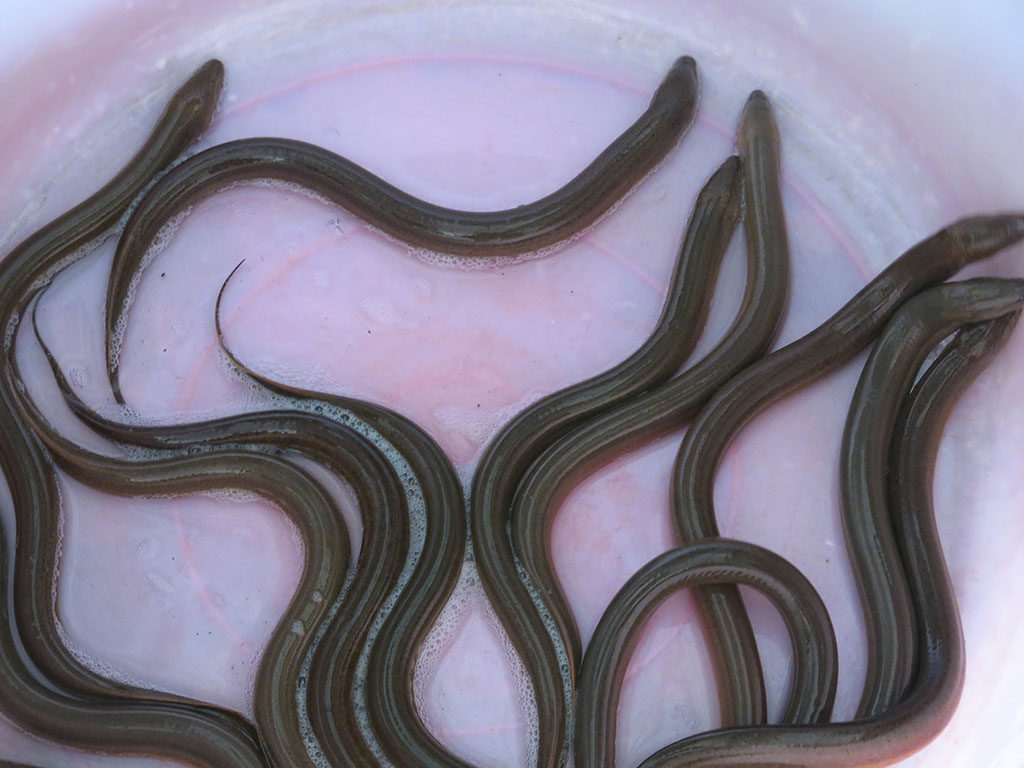 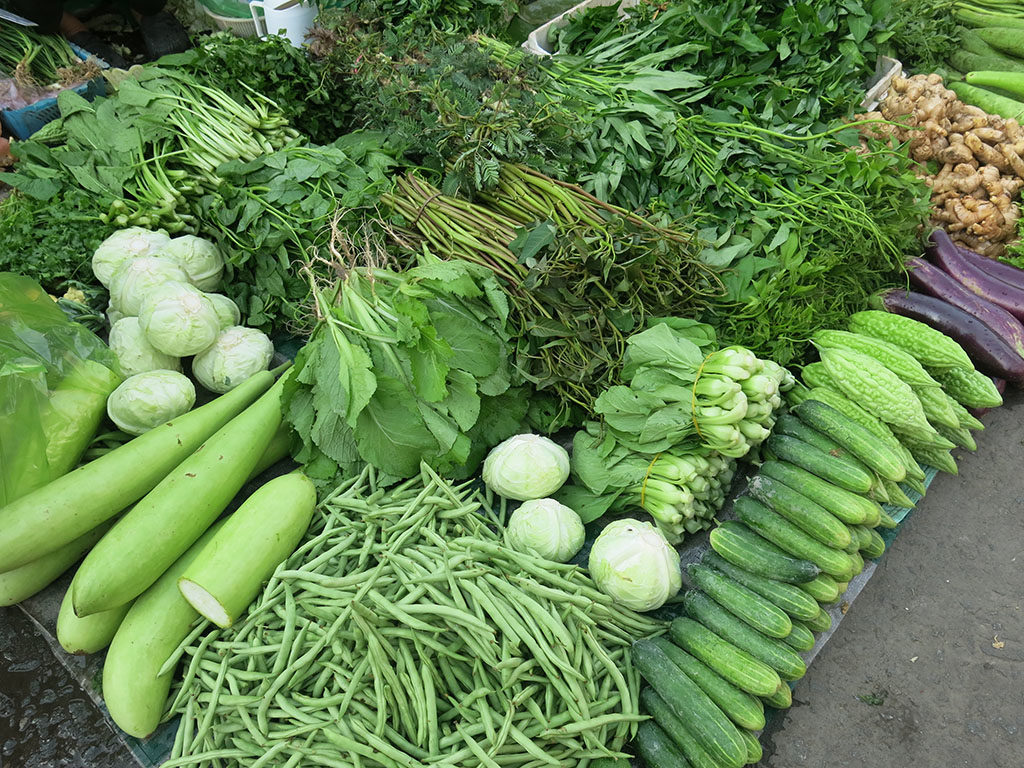 This is a set of markets where the trading happens on boat… larger boats are chock full of goods (veggies, fruit, seafood) and everyone pulls up alongside in their smaller boat to buy for their restaurant or to onsell somewhere else. Since it was nice and early, we stopped by the pineapple seller and got some sweet fruit for a post breakfast treat. So very sweet! The floating market was quite busy with sellers, buyers, and tourists and before not too long we disembarked the boat, wandered through the local on-land market, and grabbed our bikes.

The riding was similar to the day before… this time there was lots of rice fields which were really pretty. Slightly more main roads which wasn’t quite as fun, but still great to be out on the bikes. Lunch stop was again a very local hole in the wall for a nice Pho (and a cold beer). 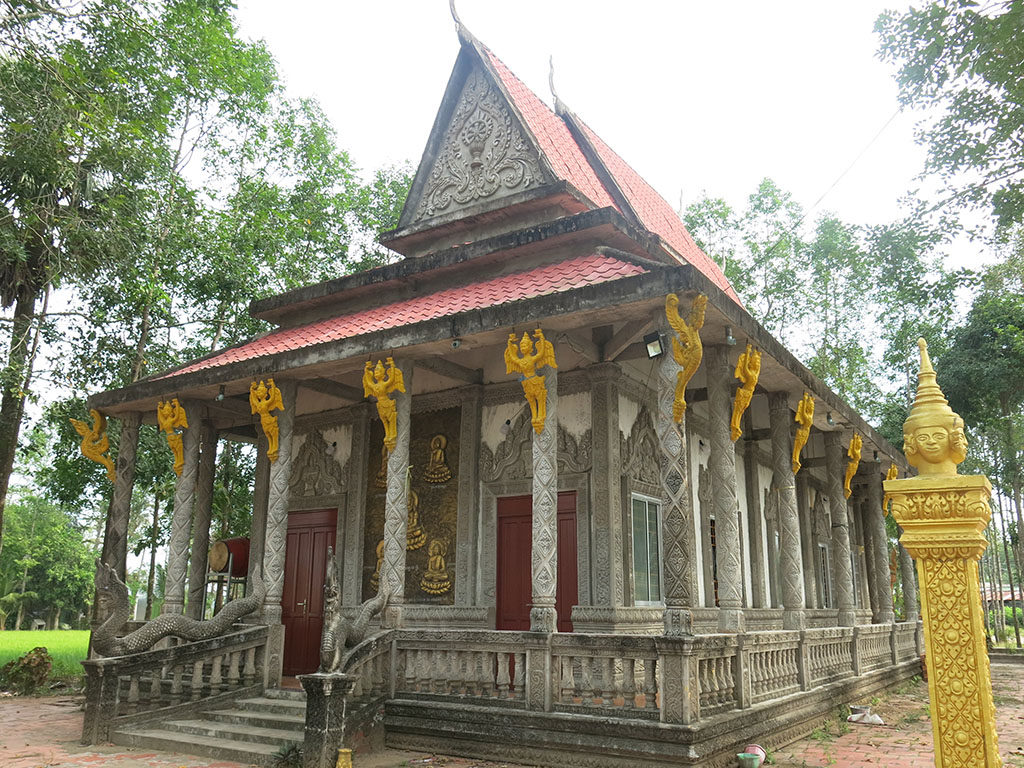 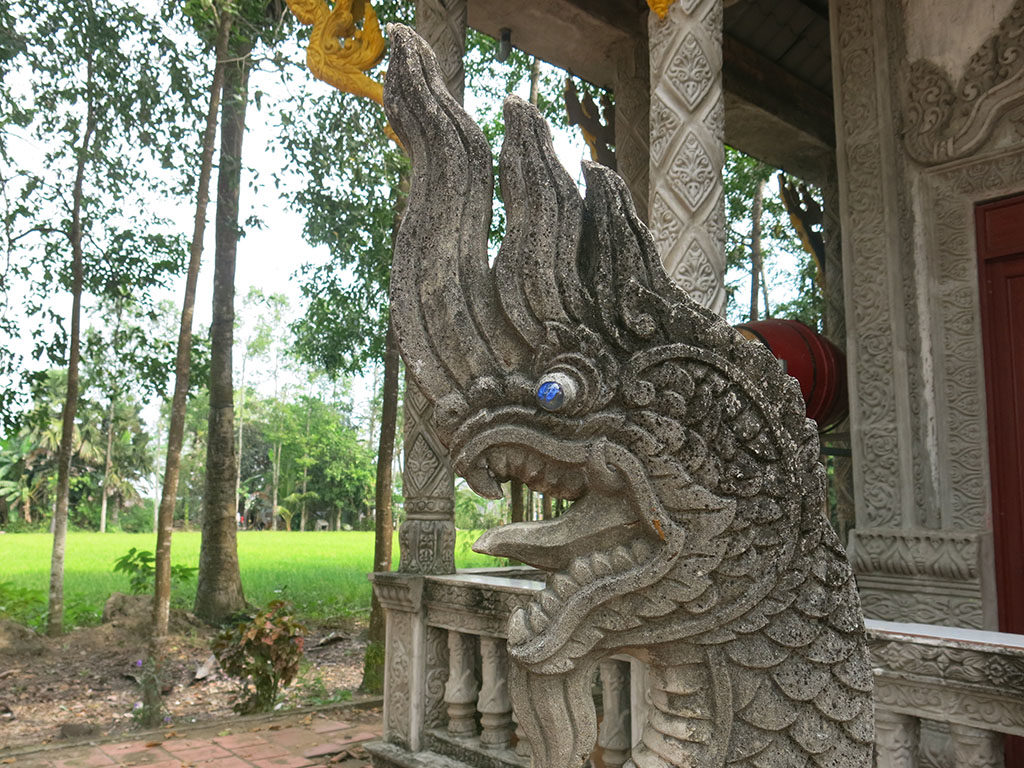 Just after lunch we stopped in to visit a Khmer temple which was interesting as it was the first thing of that ilk that we visited. It was a nice surprise as I didn’t expect the temples to start until we got into Cambodia. As we rode, it was a delight as there were so many friendly locals and kids saying hello. High fiving kids while riding is the absolute best!

Late in the arvo we has a stop for coffee and ice cream. The place had hammocks! Yessss!

And not long after we were all done. It was a great day riding… a nice long 80km, but a little cooler and a bit overcast.

From there it was a bus to Chau Doc and the hotel. We had a little time to relax before heading out for some food. Again a quintessential local eatery, this a big place with lots of locals and huge menu. Perusing it, of course I knew what i would have… frog! Complete with chili and lemongrass. 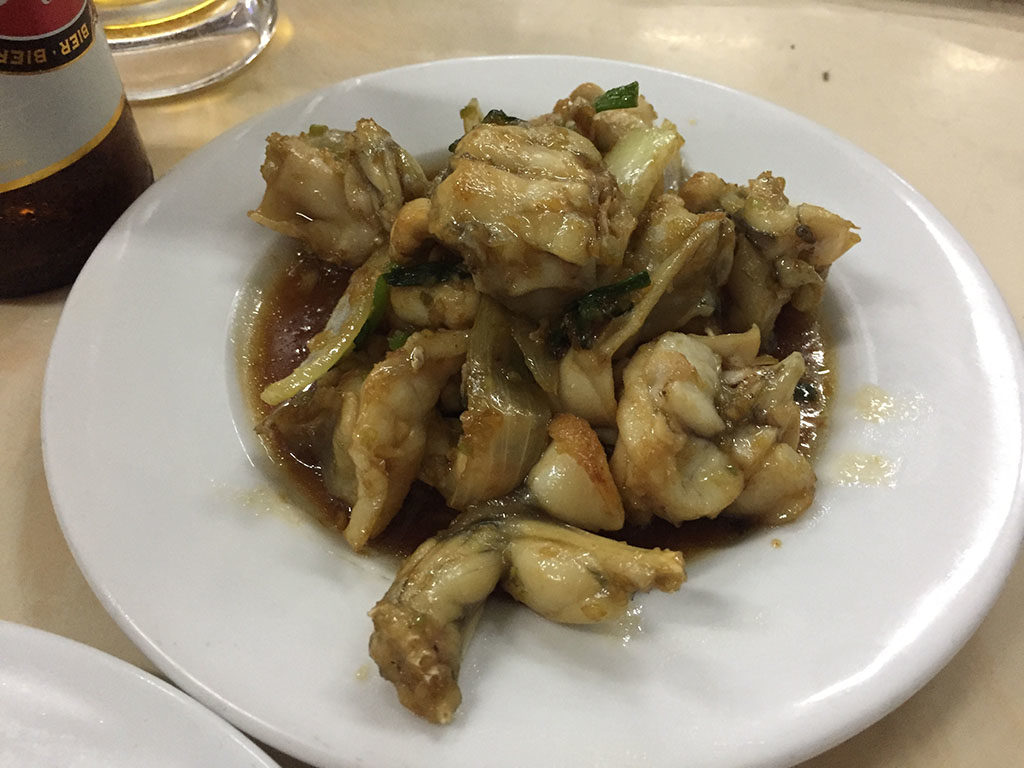 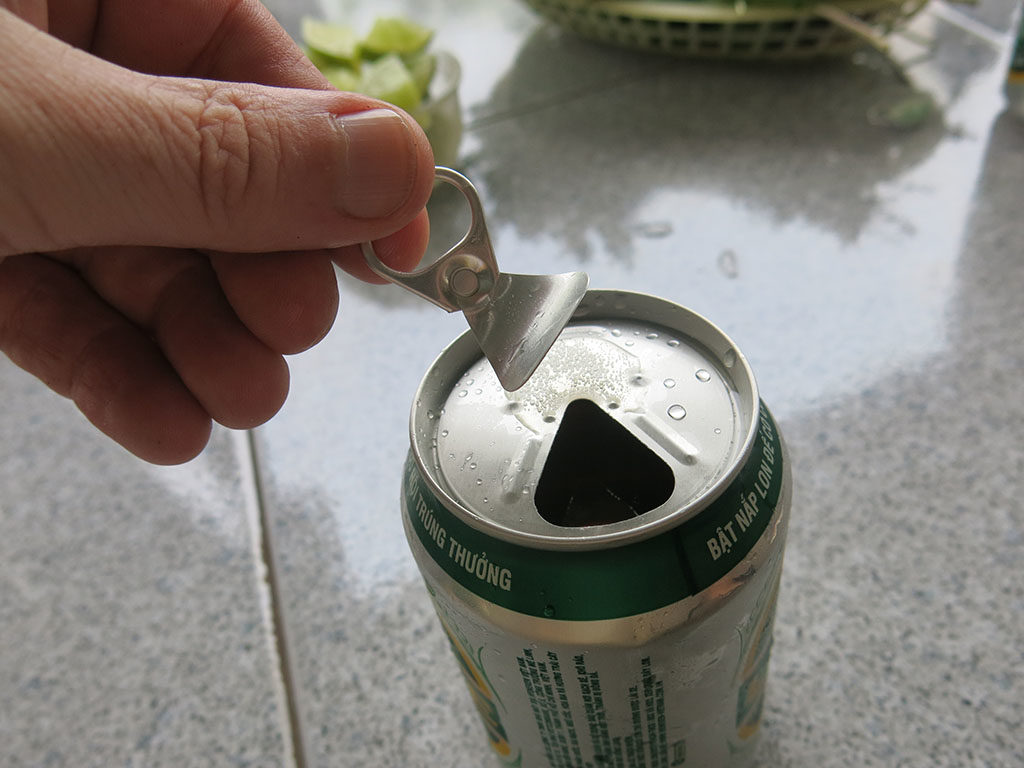 How was it? Hhhmmm, not great. Just really boney to be honest. But what I also discovered here was something had not seen in a long time… ring pulls on cans! Ha! With even the chance to win a free beer underneath!

After dinner, some of us went wandering and found some coffee and ice cream. I had the taro ice cream which made up for the frog. 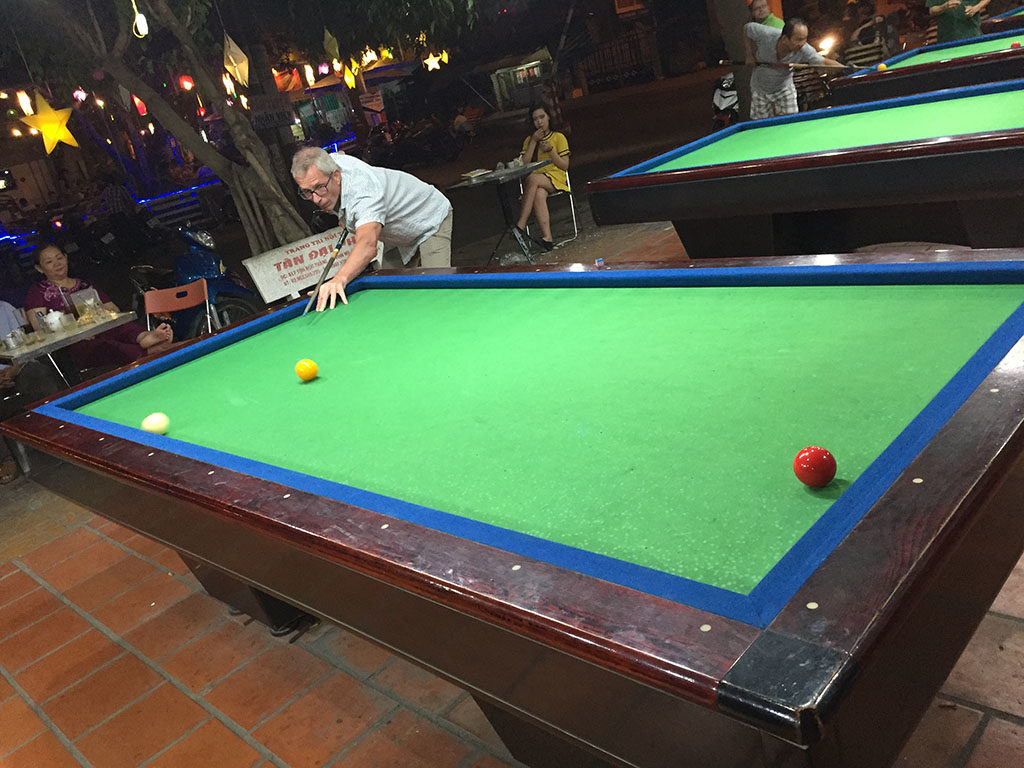 With the night still young, we discovered a local open air billiard hall. What was odd was the nature of the billiard tables… no pockets and only three balls! Thanks to Google we worked out the rules (basically teams of two, where you had to play your ball on to the other two in one hit to get a point). With some billiards and beer done, back to the hotel for sleep.