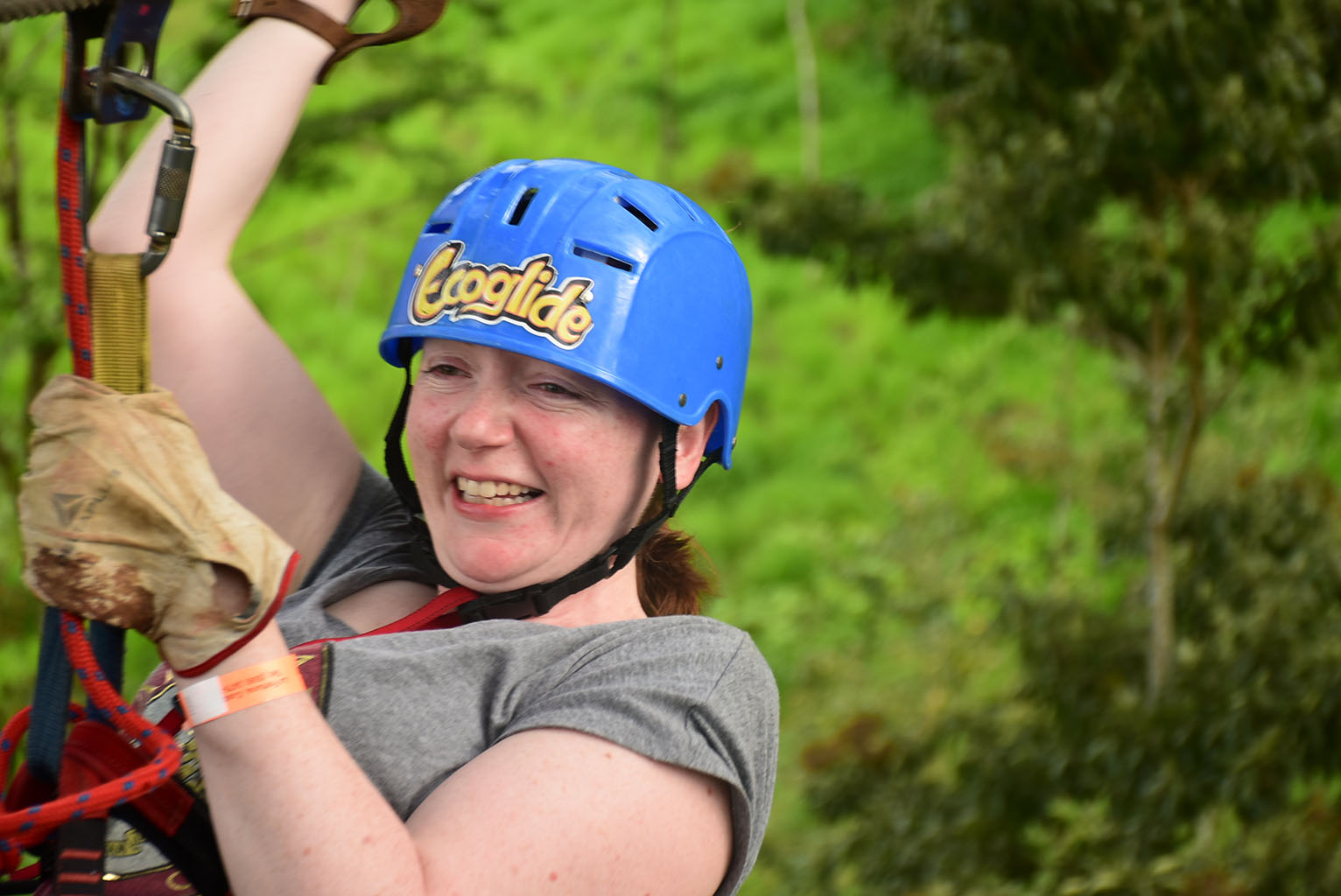 Our first full day in La Fortuna! We had already planned our two days here and jam packed them full of action and adventure, so it was time to get stuck in. With a slightly leisurely start, we were picked up by the Desafio bus (the local action adventure specialists) who grabbed the rest of the adventures from around town and we were off to our first adventure… canyoneering! 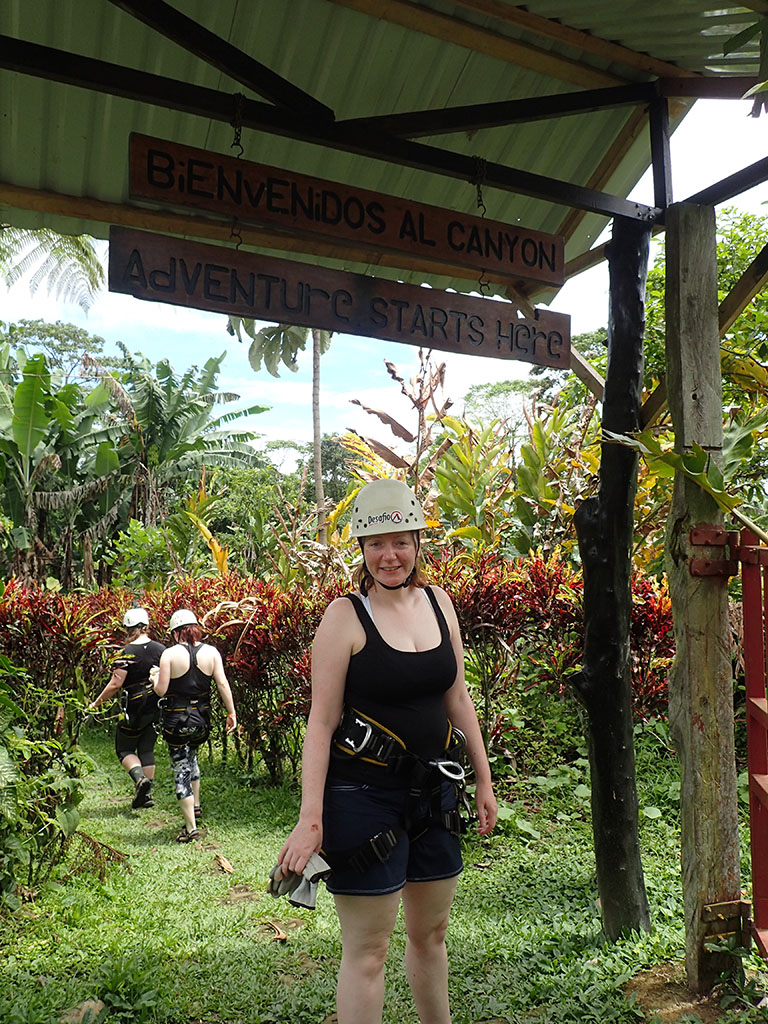 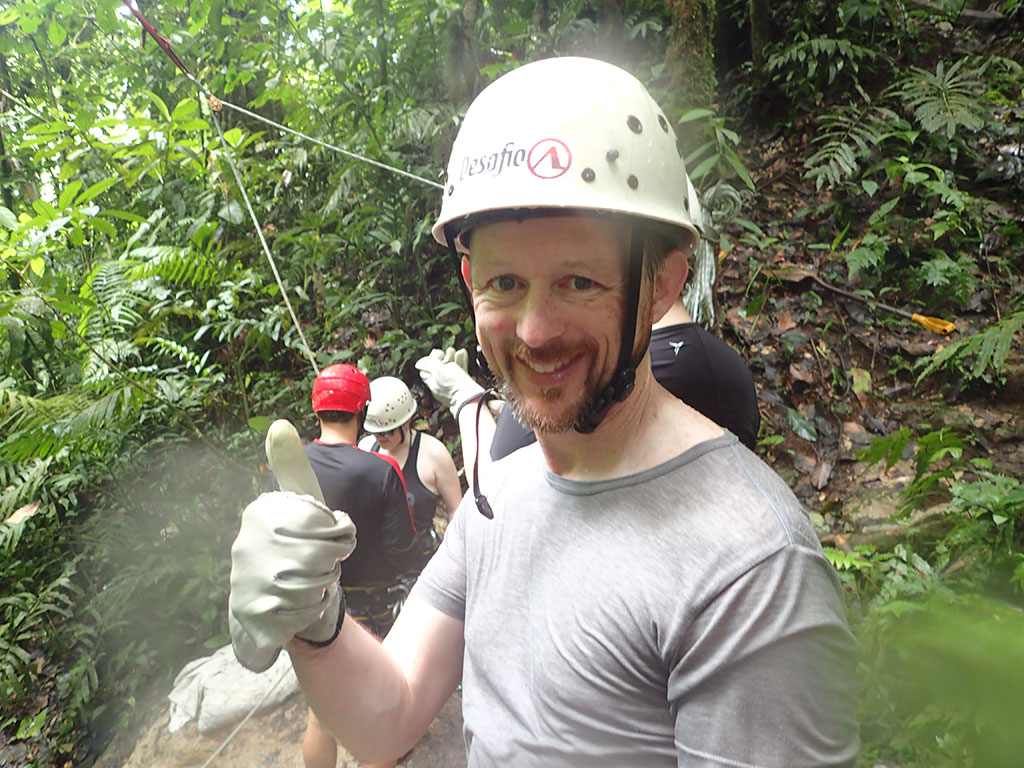 I was super keen for this one, as I had not really done anything like this. I can’t really ever having had the chance to abseil down a waterfall before! So we arrived in no time at all at our starting point where we met our three guides (well 2 and a photographer) and were given a briefing on how it would all work. We were going to be heading down some fairly gnarly canyons so safety was paramount! But it was also for folks who had not really done it before so there wasn’t too much to learn. 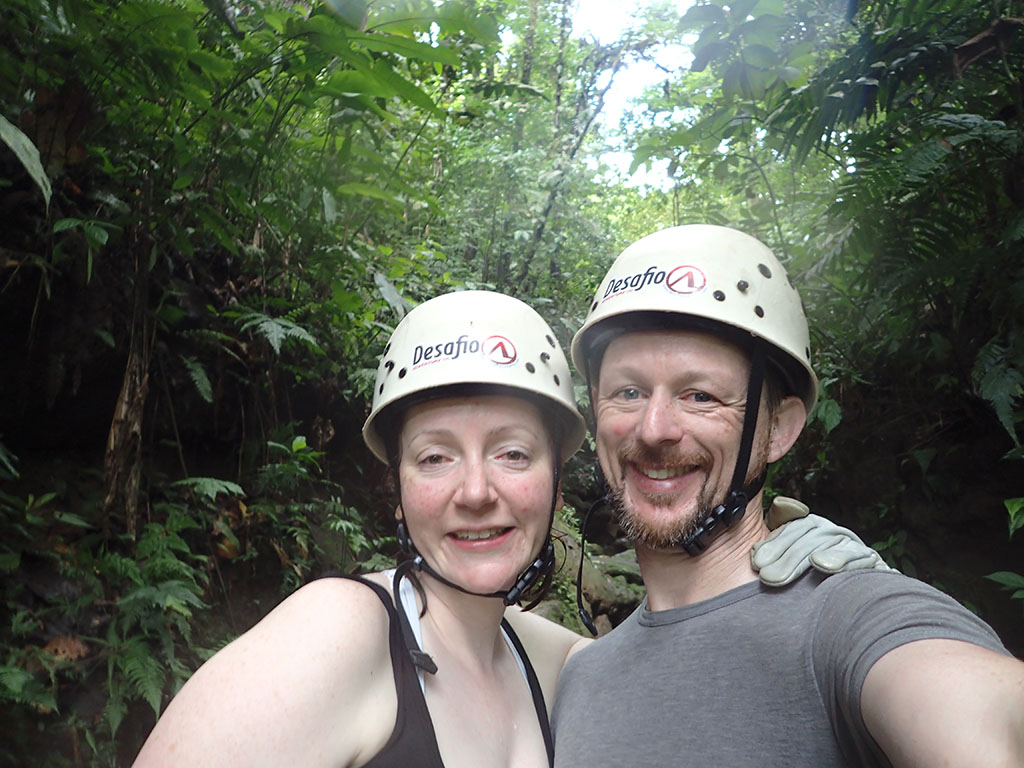 With all our gear on, Kate and I, along with our 5 other group mates headed off on the jungle path and in no time at all arrived at our first small waterfall. One by one we were connected on, given some instructions, and down we went! 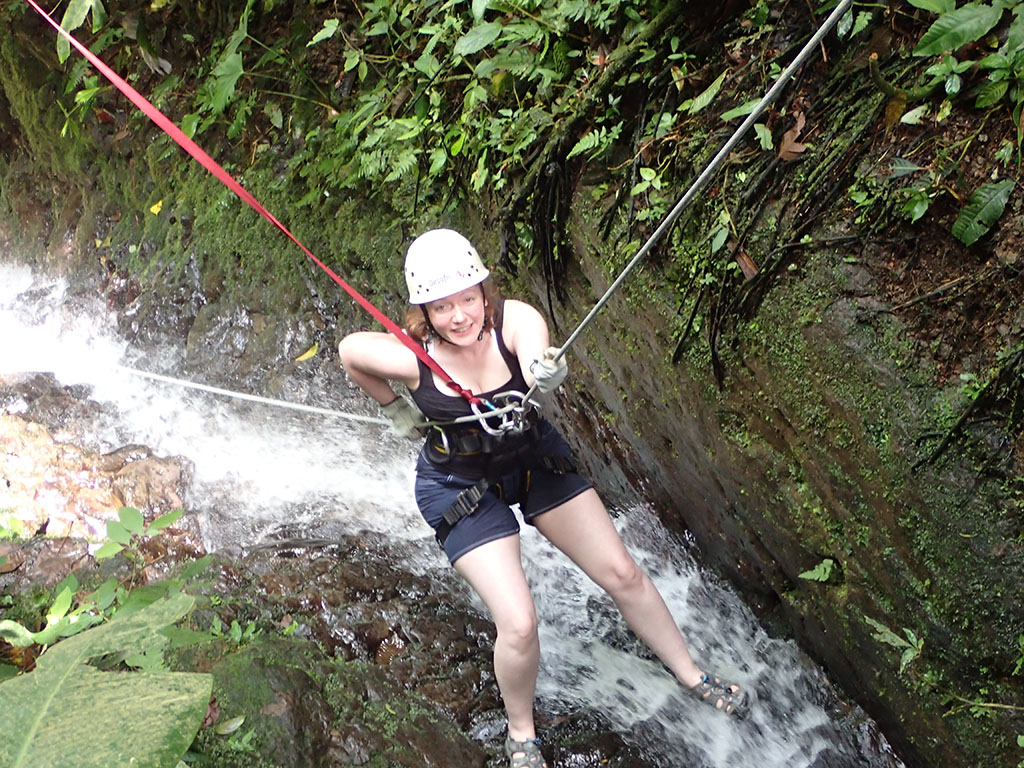 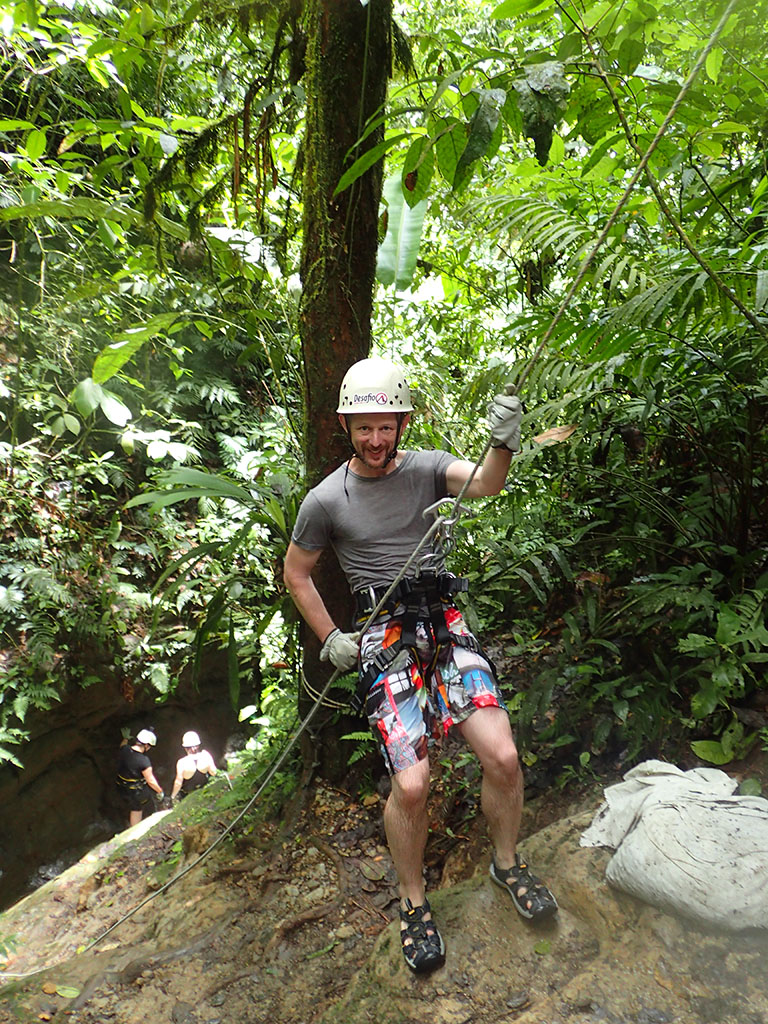 on the way down

It was great fun, getting showered with water and leaning back and abseiling down. After the first shorty, we were greeted with a much longer repel that also involved a small bit of ziplining. So much fun.

We continued our downward path with some small hikes inbetween repels. During this point we got to a spot of clambering down some rocks where the only way to keep going was to jump and bomb into a deep small pool. It wasn’t scary at all but crazy that all to this point were knee deep pools and suddenly there was one over 2 meters deep. Without any hesitation, we both did our bombs, coming up gasping for air, with water and sunscreen streaming into our eyes. 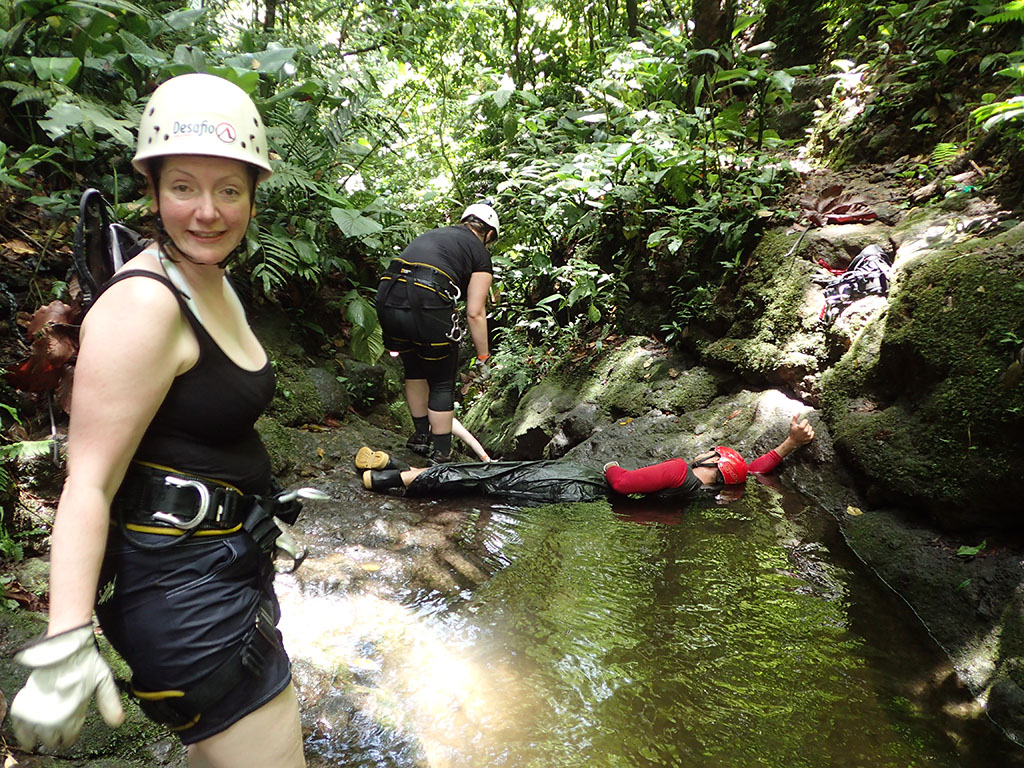 why is he lying down?

Around this time if we weren’t soaked enough, then we would be. As we approached a small climb down one of our guides was lying prone at the top. I knew straight away that he was stopping the water from streaming down. I assumed it was so our climb was safer down, however when we all got to the bottom we were asked to take a seat. Hhhmmm… I sense shenanigans. We were then given a small warning to hang on, and then the guide got out of the way. BOOM! Huge amounts of water rushed down! The force was crazy, and with me being at the very back, I caught the brunt of it all. With Kate next to me she took it hard as well. So much fun. 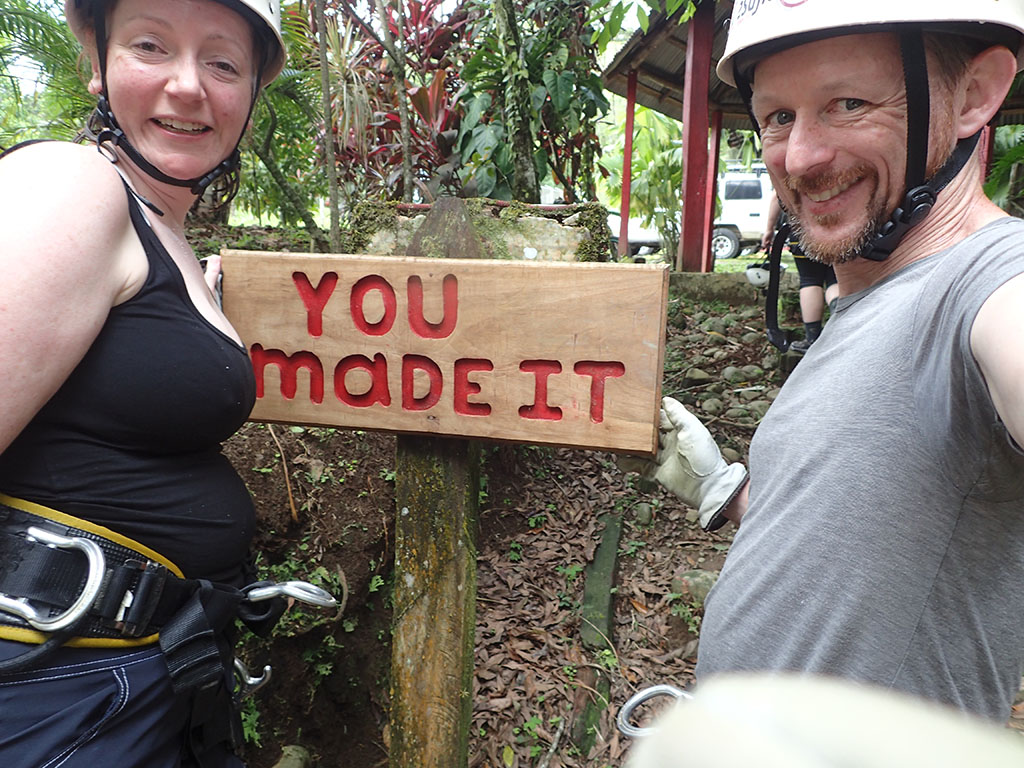 We did our last couple of repels and then it was the hike back to the top. So many stairs! At least a good Costa Rican lunch was waiting for us (rice and beans and plantains of course). A great way to top it off. 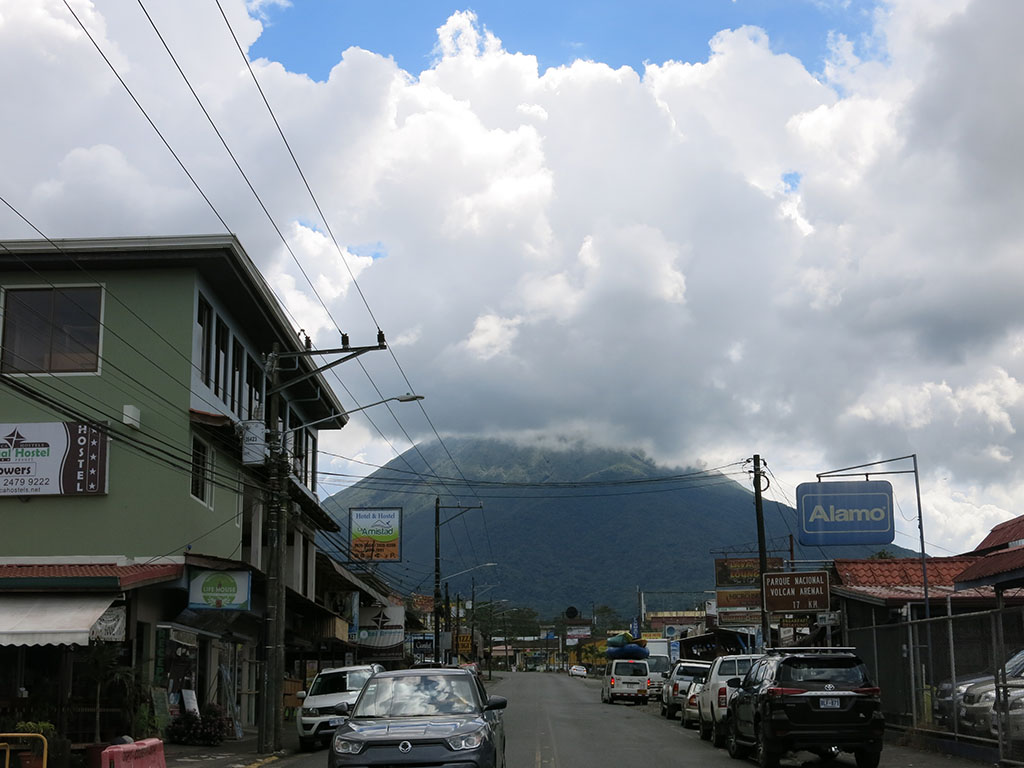 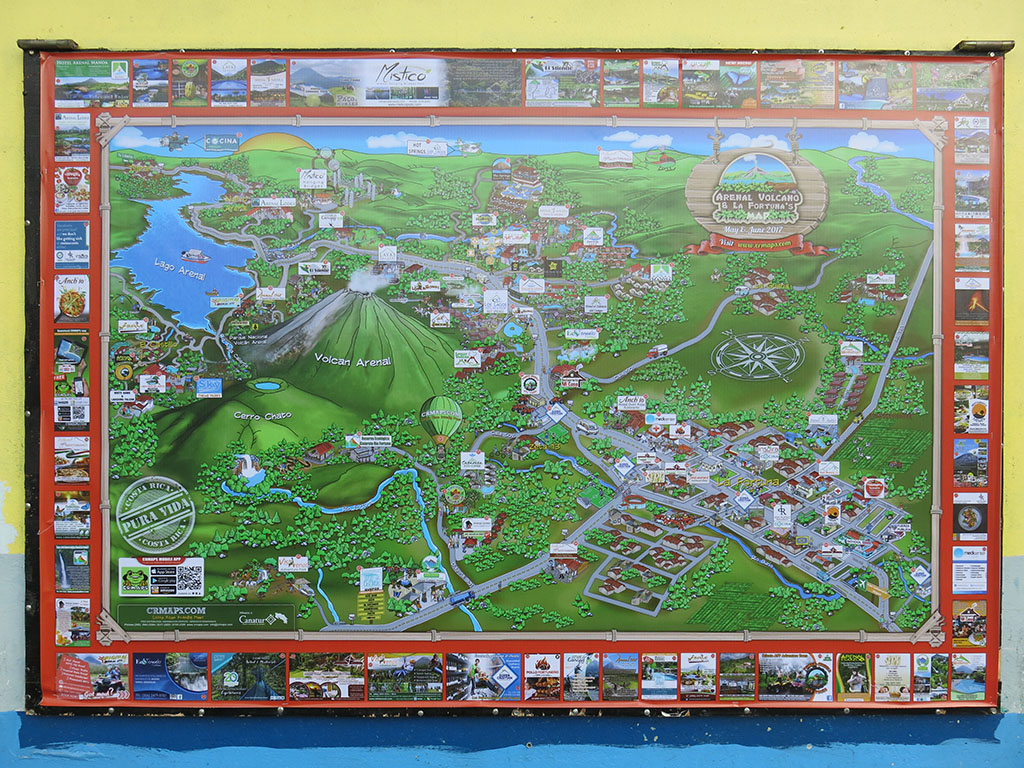 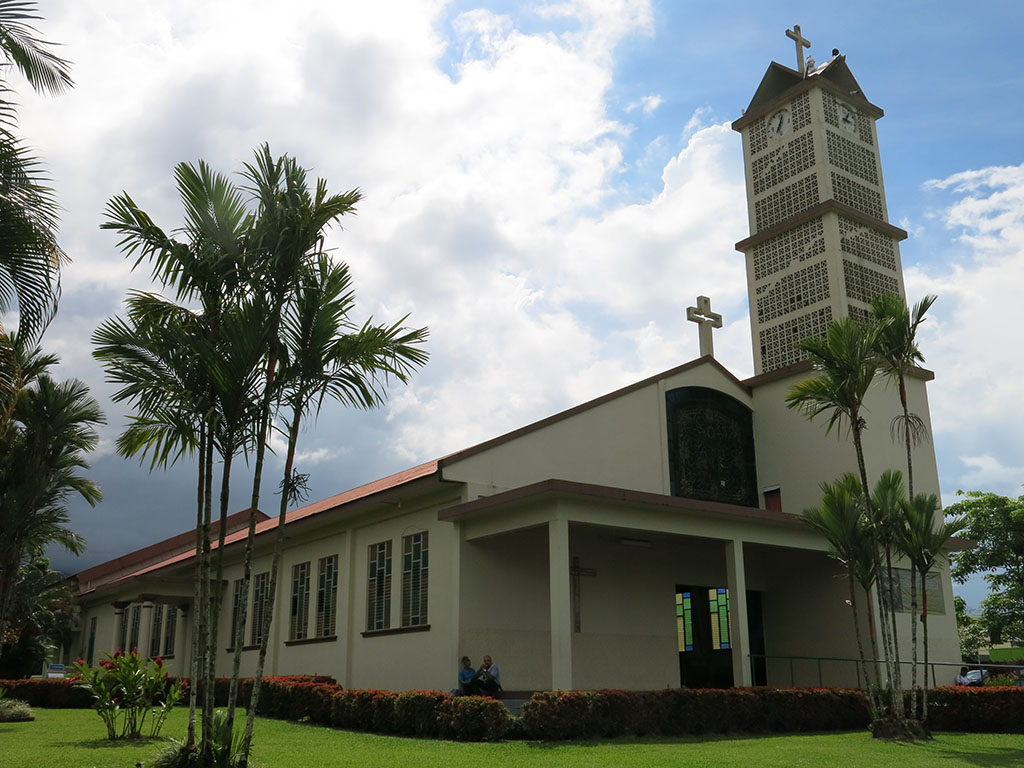 We all headed back to town and Kate and I decided to hang about in town for an hour before our next activity. There is not too much to La Fortuna. A main street with bars and food places and souvenir shops, with a quaint little church and the volcano looking menacingly down the street. It didn’t take too long to see most of what the town had to offer, which was OK as in no time it was off to our next activity. 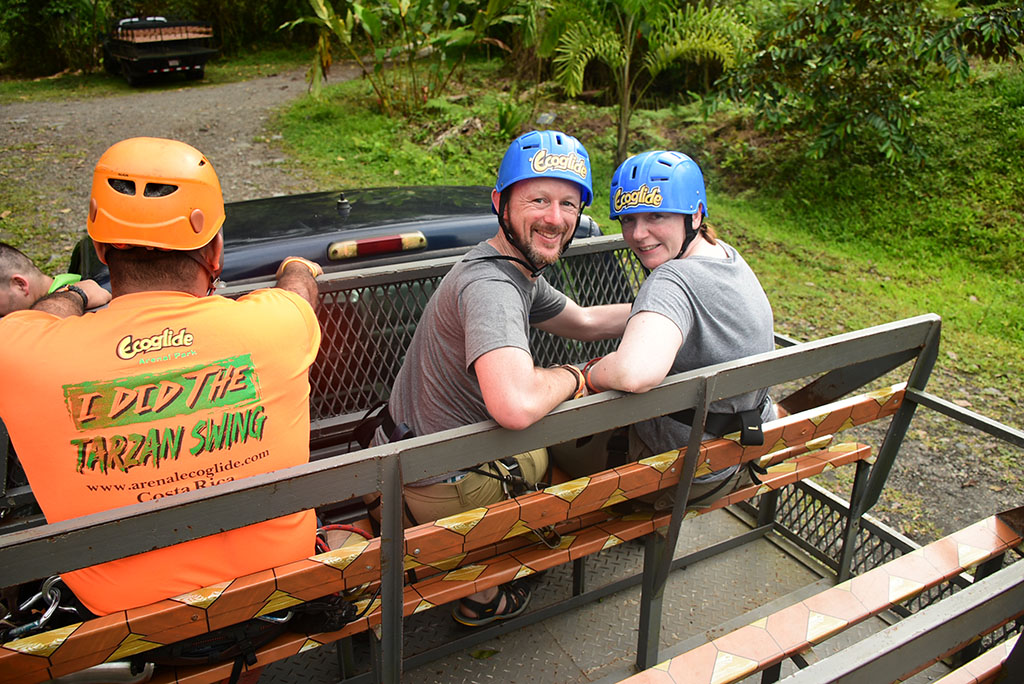 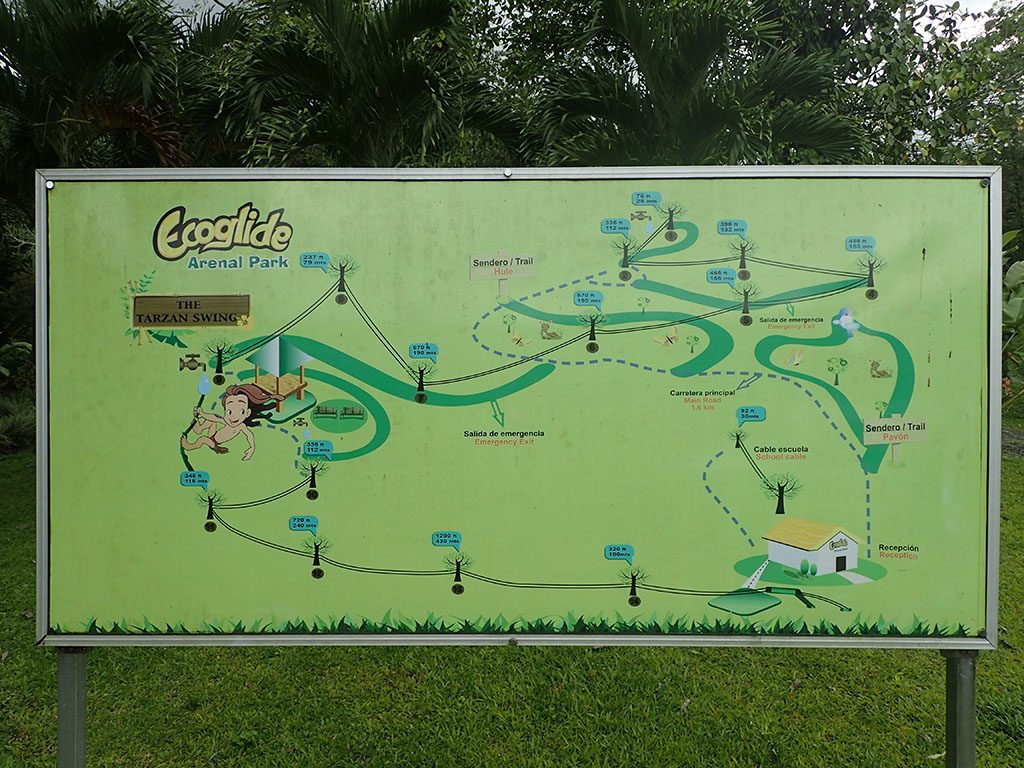 look at all those lines!

Kate knew she was going to be in her element up here in La Fortuna, as it was another chance to do her favourite action activity… zip lining! She was becoming a bit of a veteran and never missed a chance to do it. We knew we would also have a chance in Monteverde, but why not here as well?! For this activity it was just the two of us, so we were whisked away up on to the lower parts of the volcano in amongst the trees. 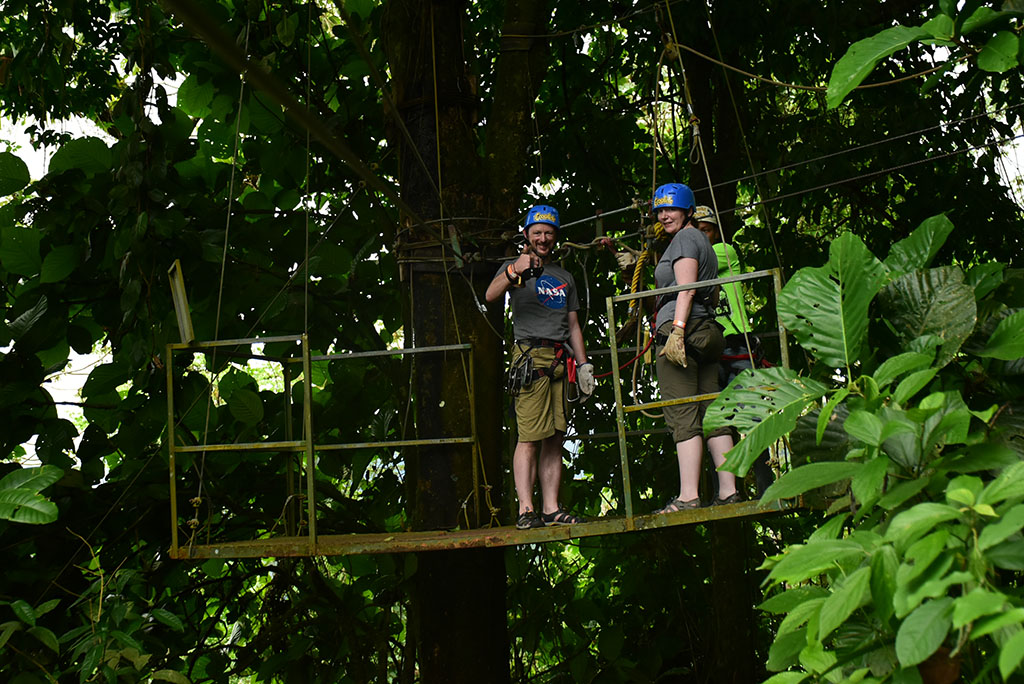 We had 3 great guides for this, and after a quick go on a test cable, we went further into the tree tops. The views were stunning looking over the town and forest. 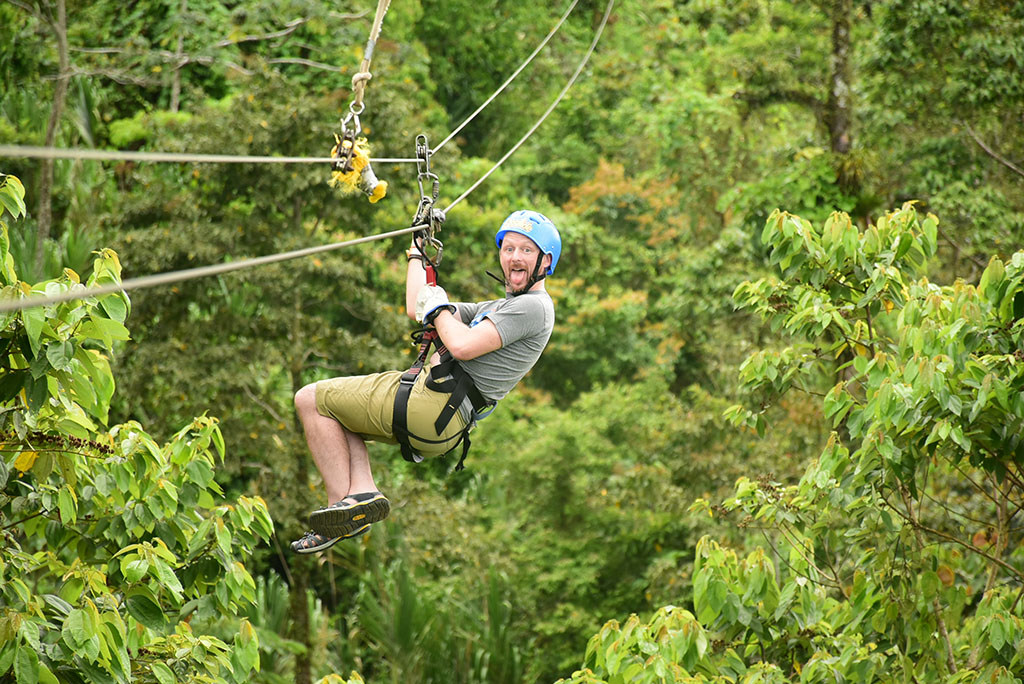 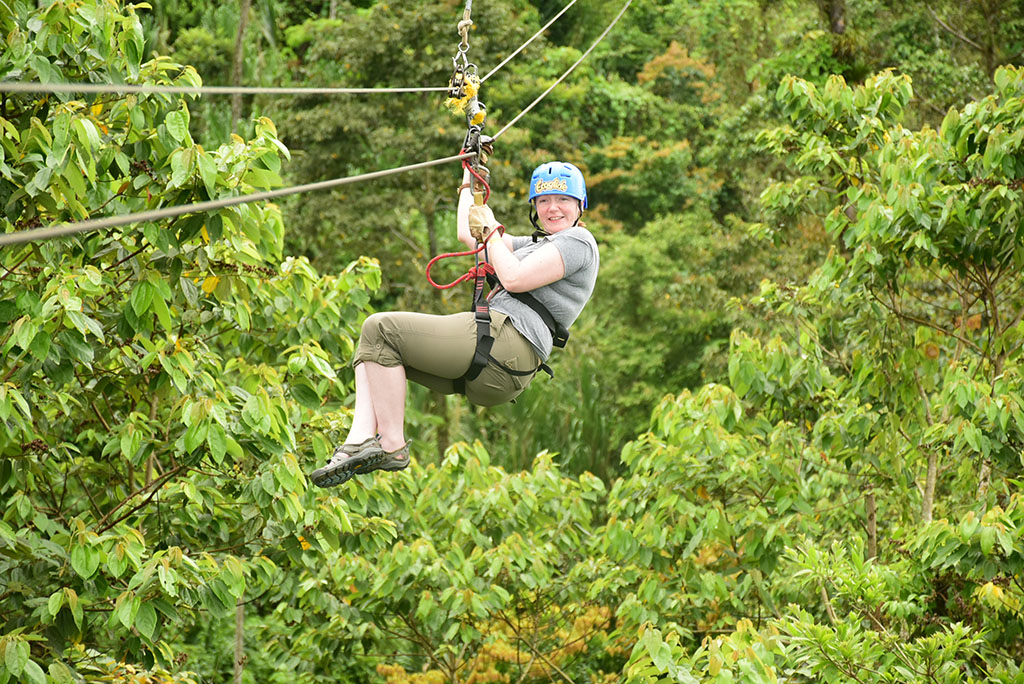 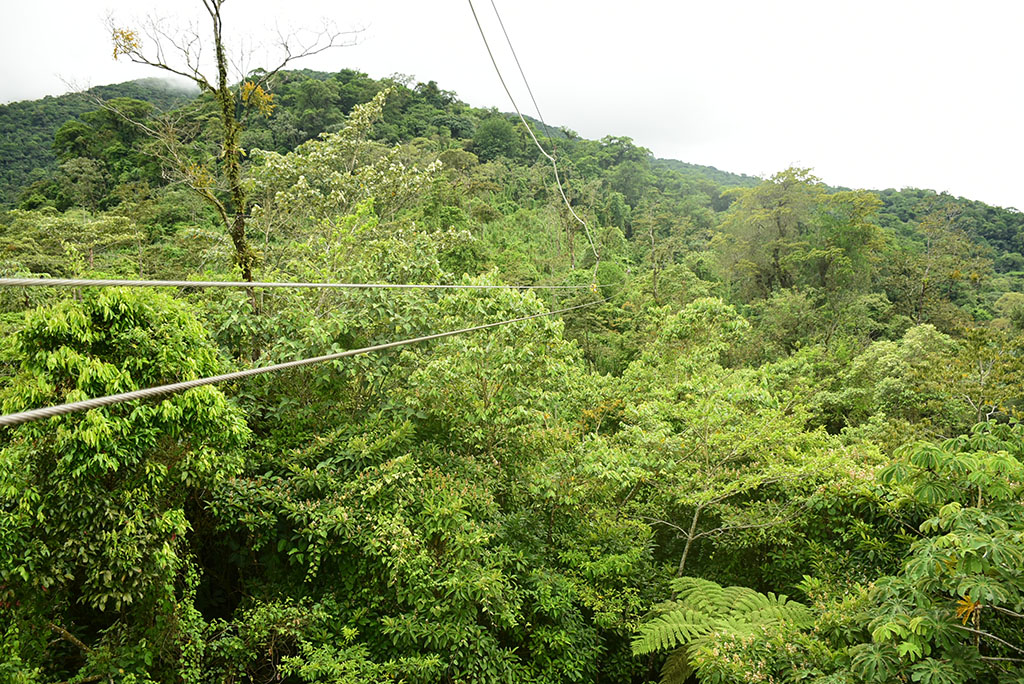 What is there to say? It was AMAZING. Some of the runs were some of the longest ones we had done, with one approaching 500 meters. As we sailed from tree top to tree top Kate was beaming the whole time. It is such a great adrenalin rush. 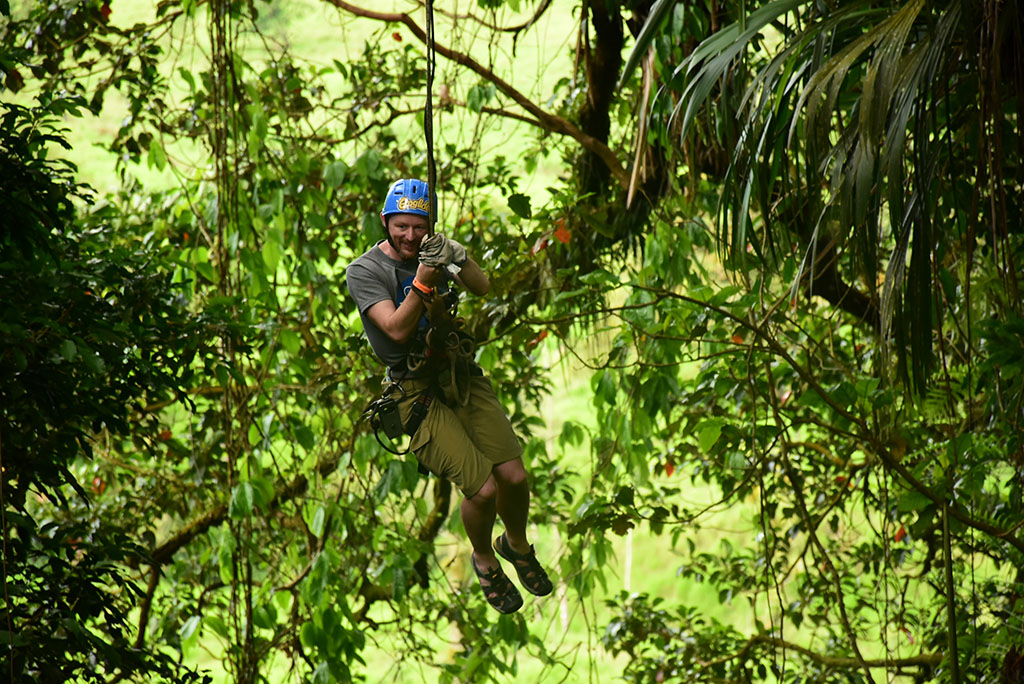 This company also had a special bonus in the middle, which Kate was not so sure about. The Tarzan swing is a point in which you buckle on to the end of a big cable and yep, you swing out. Kate had reservations but in the end really wasn’t given much choice because in no time at all she was hooked up and pushed out. She was clearly loving the initial swings out (I think they were screams of joy) but then got a bit spinny which wasn’t her thing. Me, I loved it all 🙂 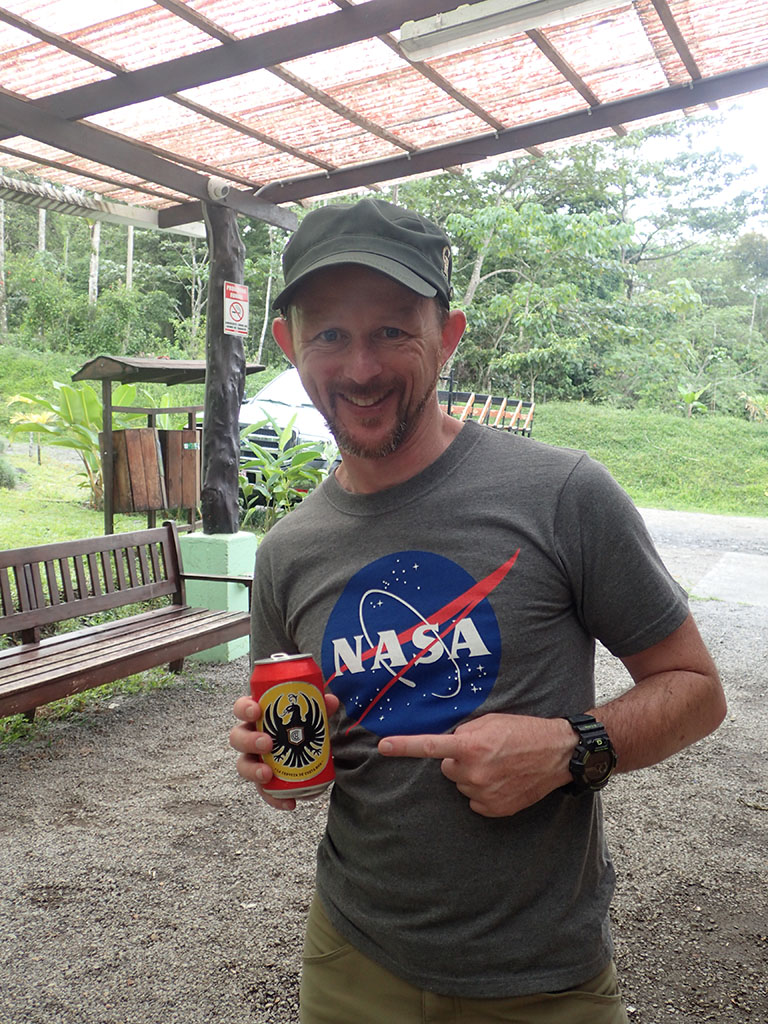 With another few zip lines were back on solid ground, with a celebratory drink waiting at the end. Good ole’ Imperial seemed to be fuelling much of this trip. 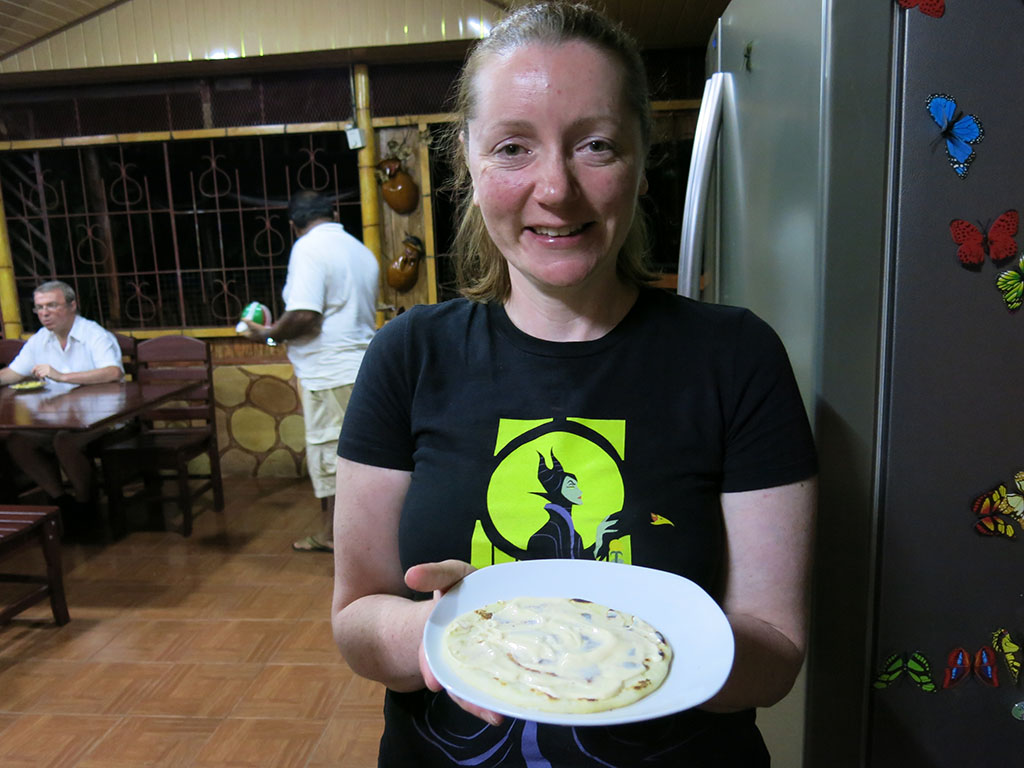 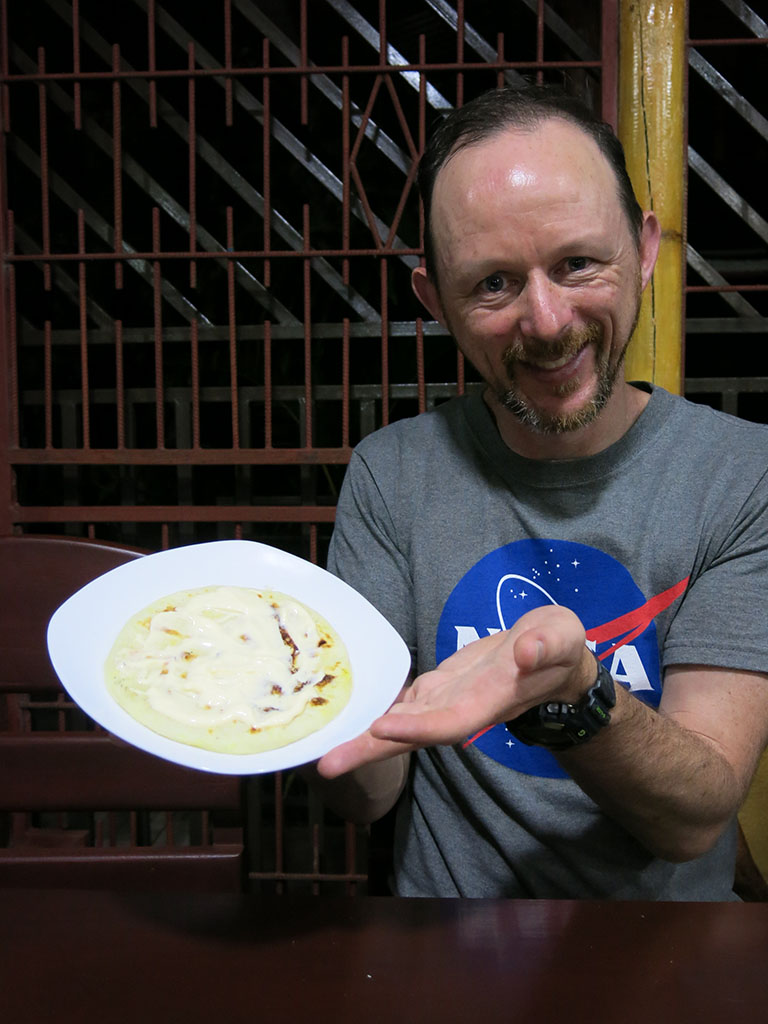 i must have been a close second

We were then done for a couple of hours and got to chill out at the hotel. For dinner we were off on another G Adventures special visit, this time to a home to do a quick tortilla making class and have a home cooked dinner. Dona Mara was our host and her and the family put on the hospitality. We started with the tortilla making, where we each got it into shape and put it on the wood oven. Kate’s tortilla in particular was picked out as being a winner, so she got first taste of their home brew spirit, which we all got to try. Not bad actually! 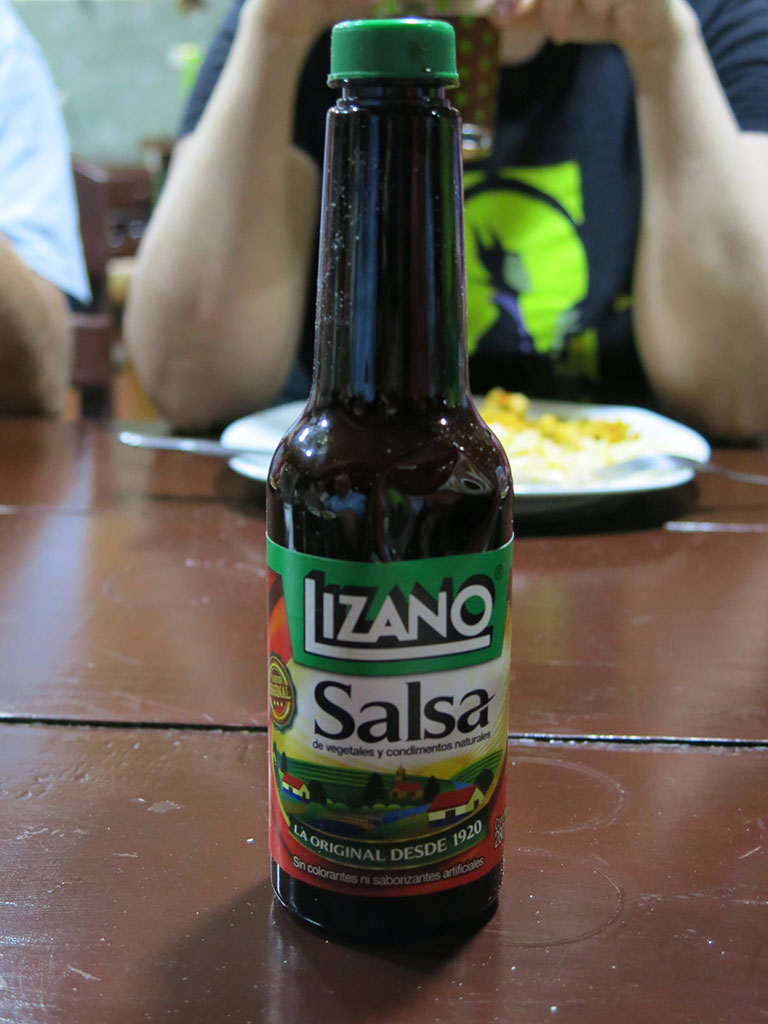 After enjoying the fruits of our labour, we sat down for dinner… yep, rice and beans and plantains, and some tasty chicken and salsa. Speaking of salsa, I am getting addicted to a particular brand of salsa sauce, which is DELICIOUS. It has a bit of a vinegary taste to it, but boy am I sucking this stuff down. Cross your fingers I can get it back home! 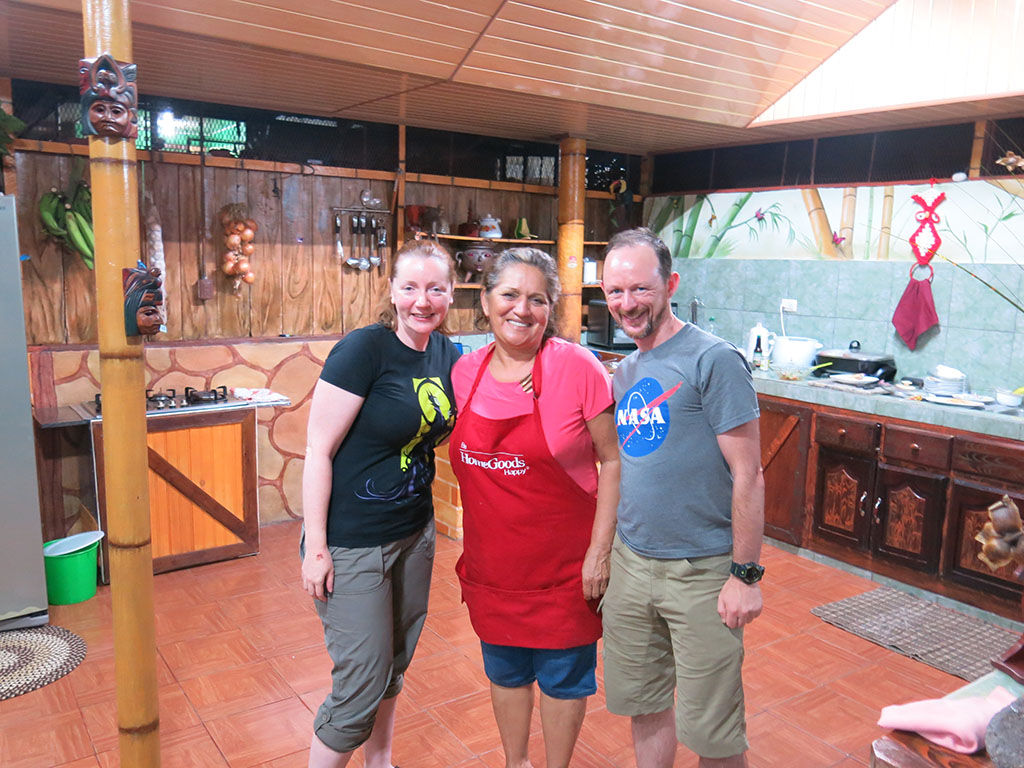 And with a delicious meal, it was time to say farewell to Dona Mara and head back to the hotel for a relatively early night. More action in the morning awaited.