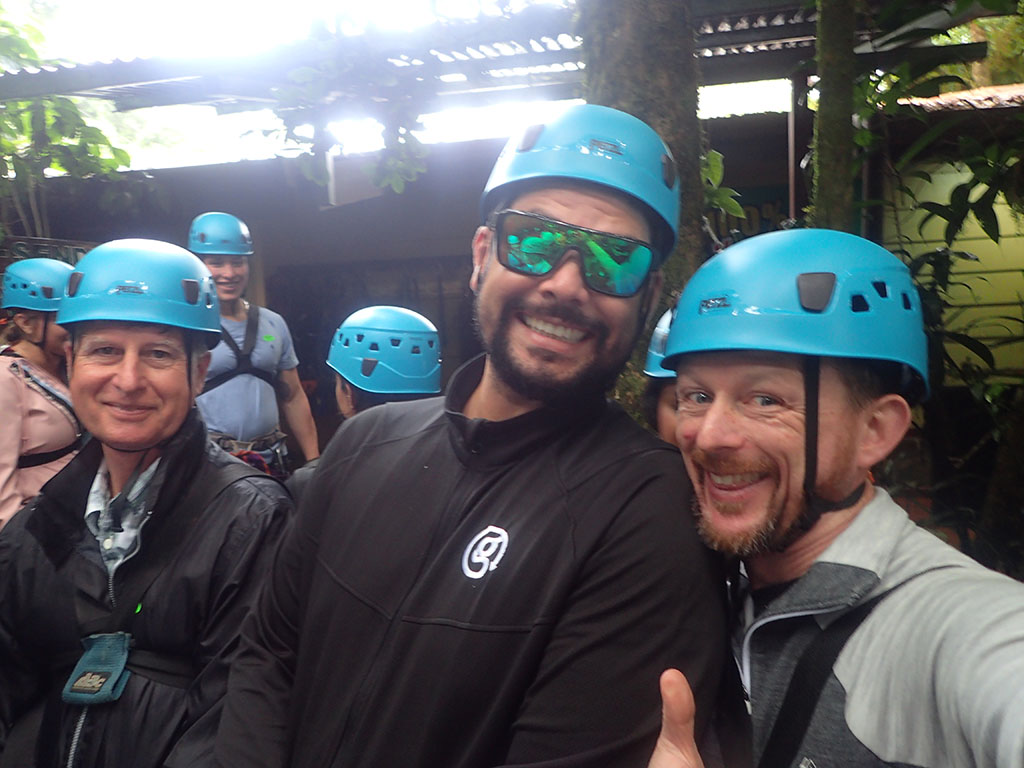 Another day in the clouds, and another day where the weather was much clearer than usual. Andreas was saying that the locals are a little worried, as it is a clear impact of climate change, and while it not being as cloudy doesn’t seem that bad, it could have drastic consequences for the local wildlife. So a mixed bag huh?

But not to dwell on that, we had a day of quite different activities planned. Being on a Nat Geo branded G Adventures tour, we were off to to participate in a local effort to regenerate the forests and help in building a forest corridor toward the Pacific. While Costa Rica now has excellent conservation practices, they have many things in mind to help with the wildlife and to keep tourism eco friendly. So off we went to do our part. 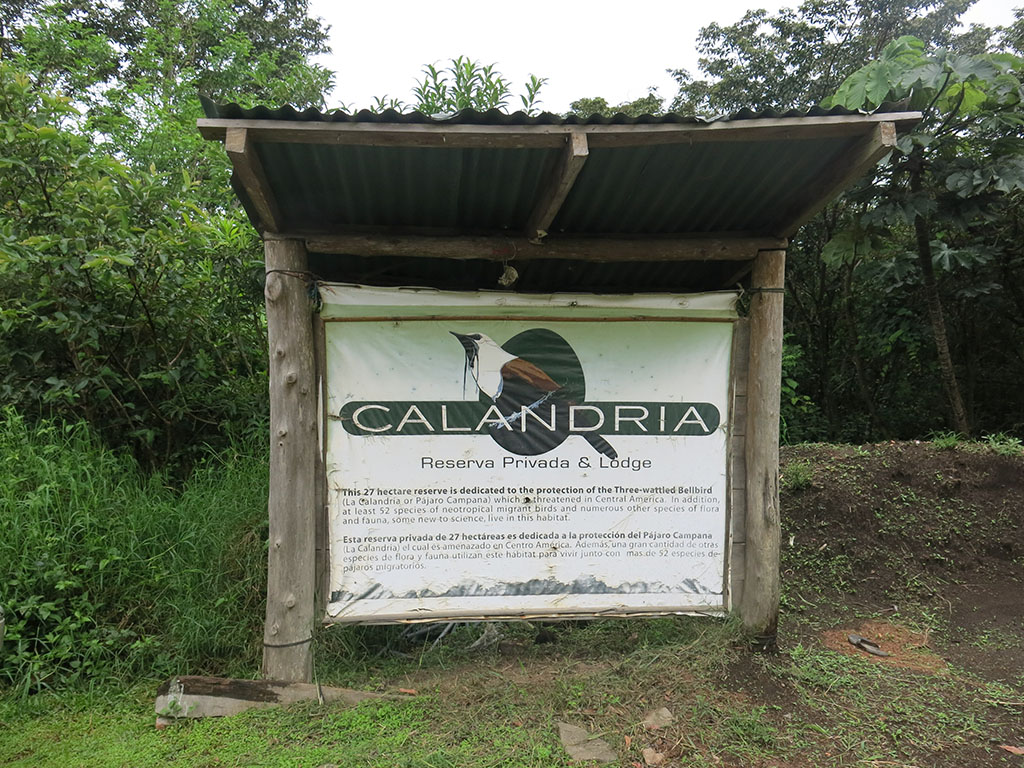 In fact, what we were helping out with at the Monteverde Institute (a local run research and conservation centre) was to help prepare their 1000’s of tree seedlings that are distributed to local farmers for planting. As it was put to us, just helping out for a couple of hours means they get about 30 hours of work done and it contributes greatly. They even say that with the number of trees planted we offset the carbon of our trip! Maybe not quite for us Aussies… 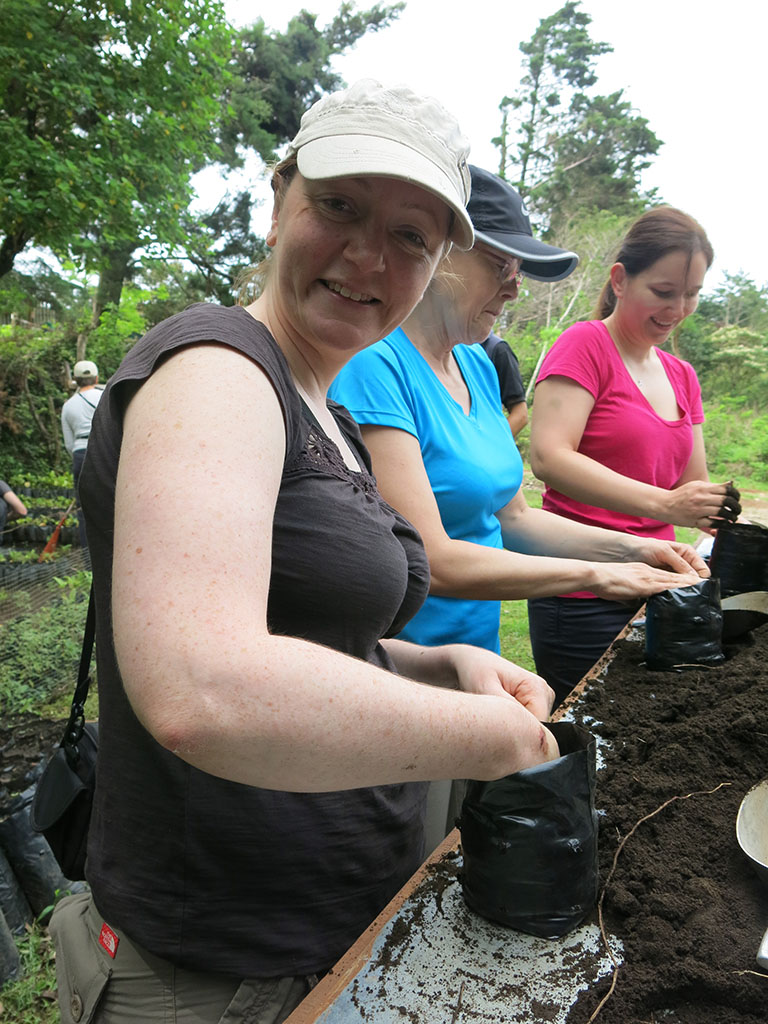 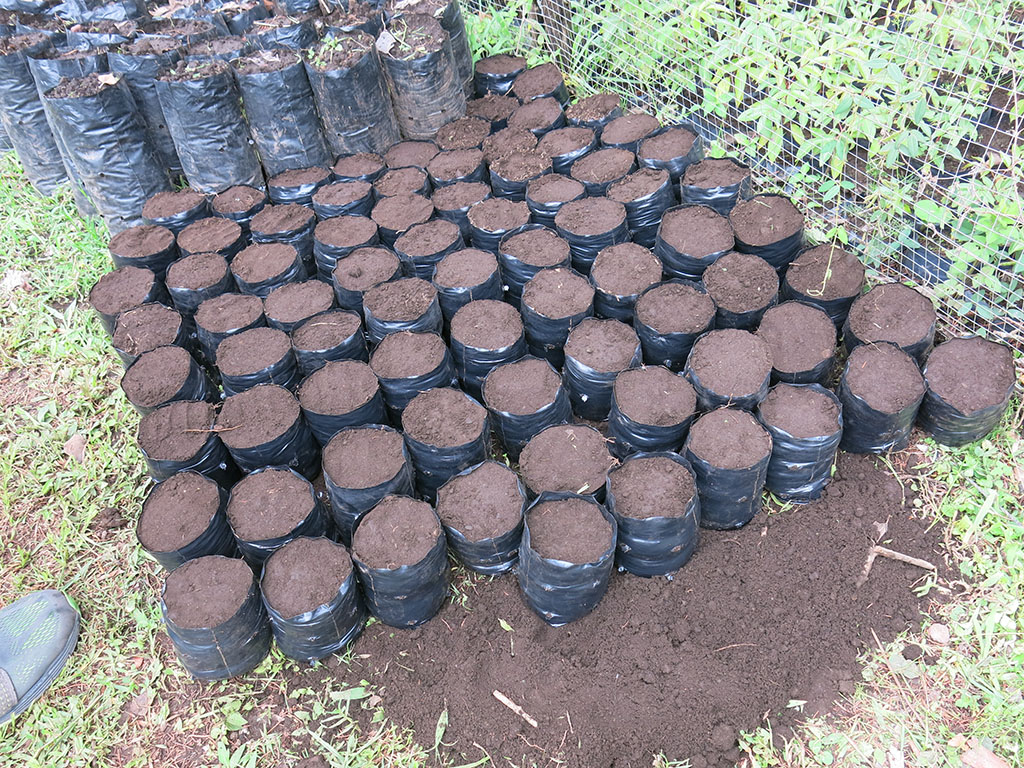 not a bad effort 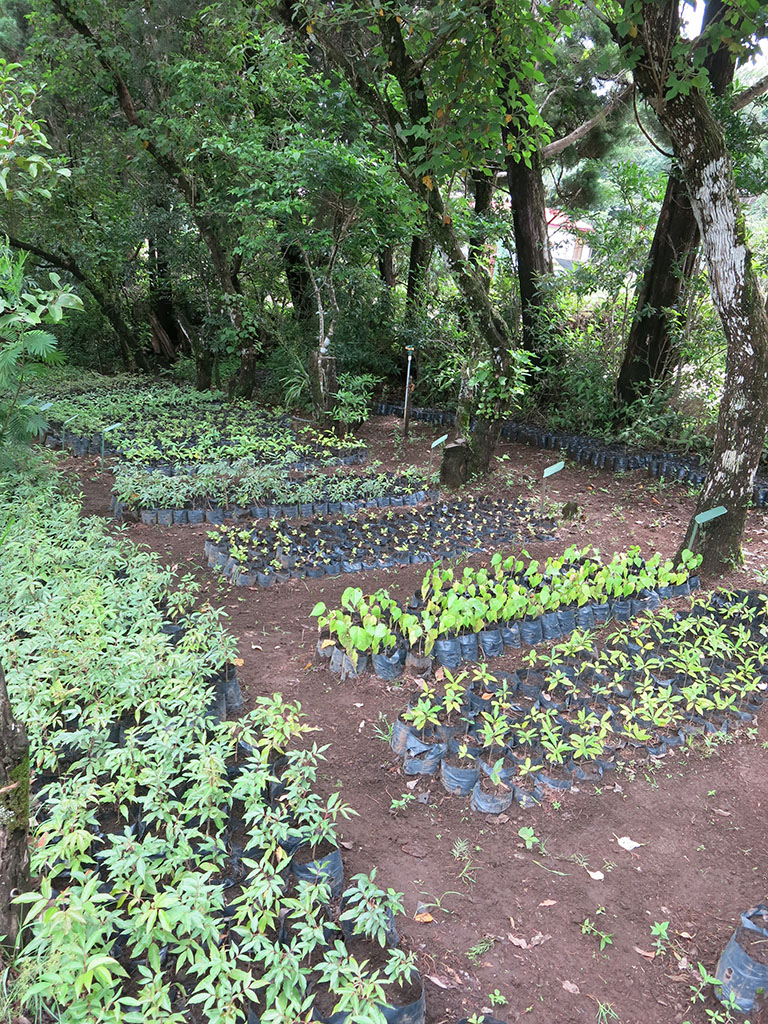 So with the briefest of instructions we got to it! We had a couple of things to do. One was filling bags with soil ready for seedlings. Kate and I started with that, getting that dirt in there nice and compact. In no time my hands were covered in dirt (Kate was a little less messy than me as always). The other job was to do some cleaning up and weeding of seedlings, meaning I got down there on my knees and started doing some gardening. Yep, I was gardening on the other side of the planet.

For a couple of hours we did our bit and then made our way to the small township of Monteverde itself to visit the actual institute. Monteverde is fascinating as it was founded by American Quakers in the 1960’s as they made their way down from the US. It started as dairy farming and while that is now waning, it has established itself as a research hotbed and a centre of eco-tourism.

At the centre we got a great lecture from the director, who filled us in on Monteverde, the wildlife, the forest, and all the efforts in place to protect things. It is some pretty amazing work that they do and they still have a great deal to understand about the area, and what they need to do to protect it from the changing climate.

After providing us with a tasty local lunch, it was back to the hotel for an hour to chill out. What was next? More zip lining!

Andreas has not sold the ziplining at La Fortuna that much, as here apparently we were in for a bit of a treat. You know how we thought the 500m lines at La Fortuna were long? Here we had a couple of lines over 1km, with one at about 2km long. We could combine that with some “Superman” zip lining, as well as another Tarzan Swing. Yes! 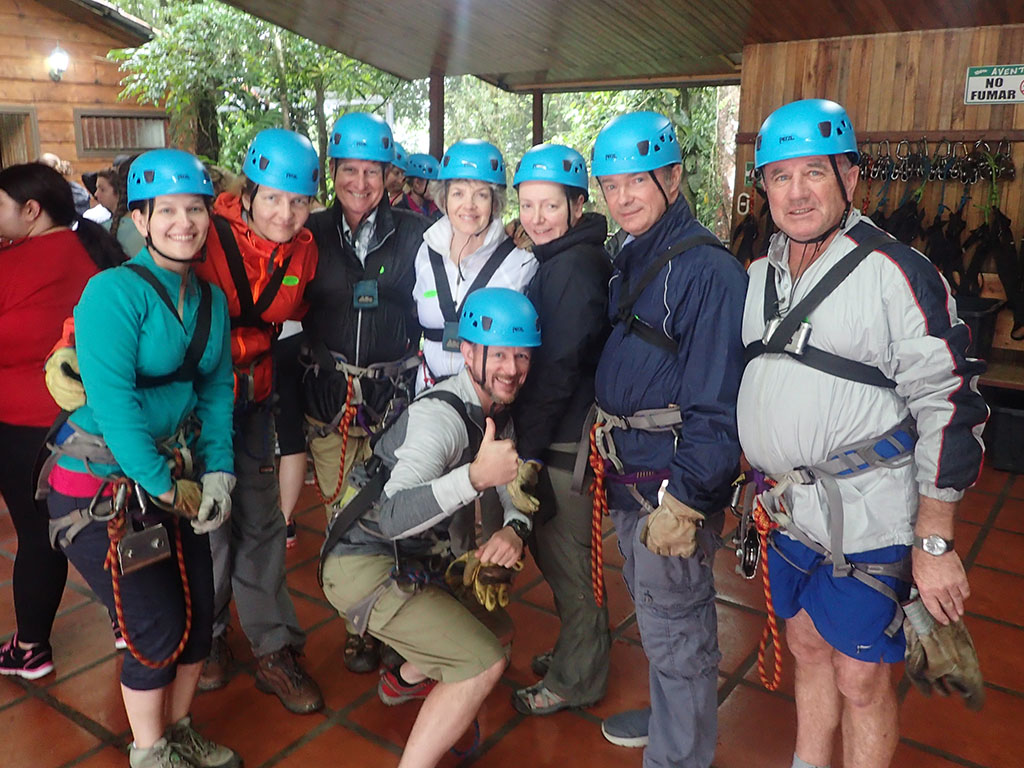 A bunch of us from the tour were braving it, and so off we went. This place was buzzing with a lot of visitors so it certainly had a different vibe to our more low key zipping at La Fortuna. This was a much more regimented experience, with a guide at each station who would move you on, rather than a couple of guides going around the whole way with you. But this one was much different to any other one we had done in the past.

The first half dozen lines were fairly short and sharp and actually pretty quick. We had to break on most of them, unlike at La Fortuna. So we actually moved through those at a fair clip. But that is when things changed a bit. We were greeted with an epic line that was over 1km long. Woo! On I hooked and off I went. Like La Fortuna, this was magical, soaring over the forest. The line being so long, and not having to do anything, meant you could just soak it all up. The cloud was settling in in patches meaning you would zip in and out of the mist. 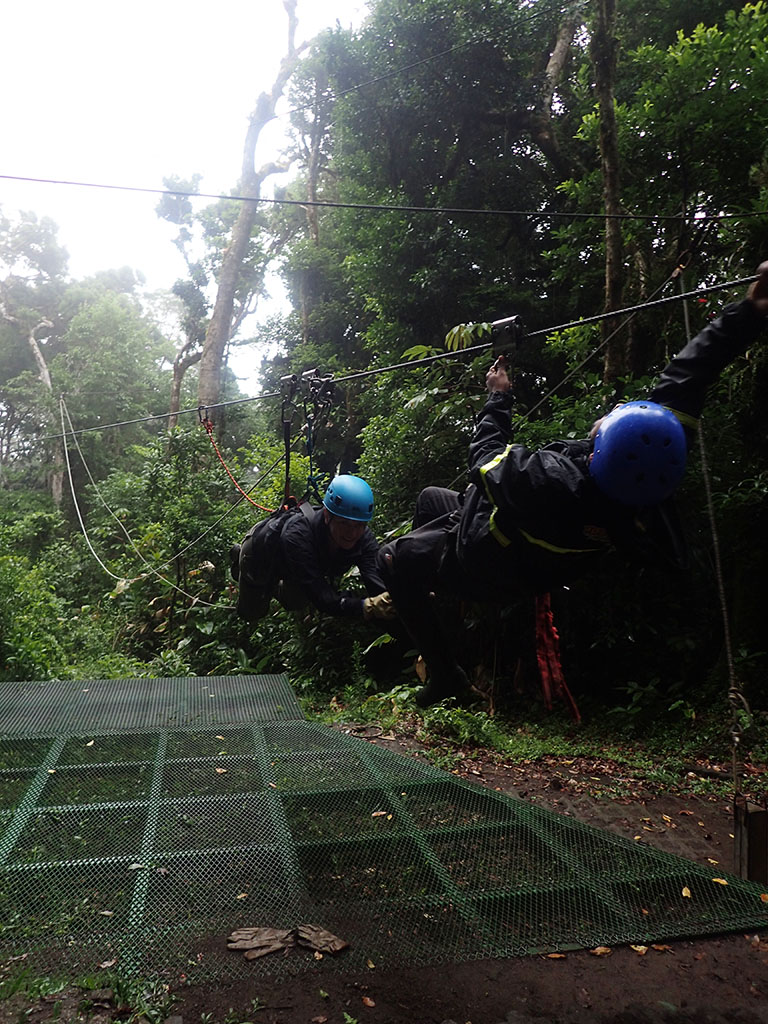 getting a tow back in to base

From there we loaded into a small jeep and headed up. We had two to go, and both of these could be done in “Superman” style, meaning you were not sitting cruising along, rather lying horizontal and zooming head first along the cable. The first was one amazing. At close to 2km, it was simply flying through the air, not being able to see the end due to the clouds. The view down below was fantastic, seeing other ziplines along with the forest. I didn’t want it to end. For Kate it ended a little prematurely, with her stopping just before the end, meaning a rescue party needed to be sent! Luckily for both of us, we had one last line that was a Superman as well. Not quite as long but a bit faster, so with arms out we flew into the final station. 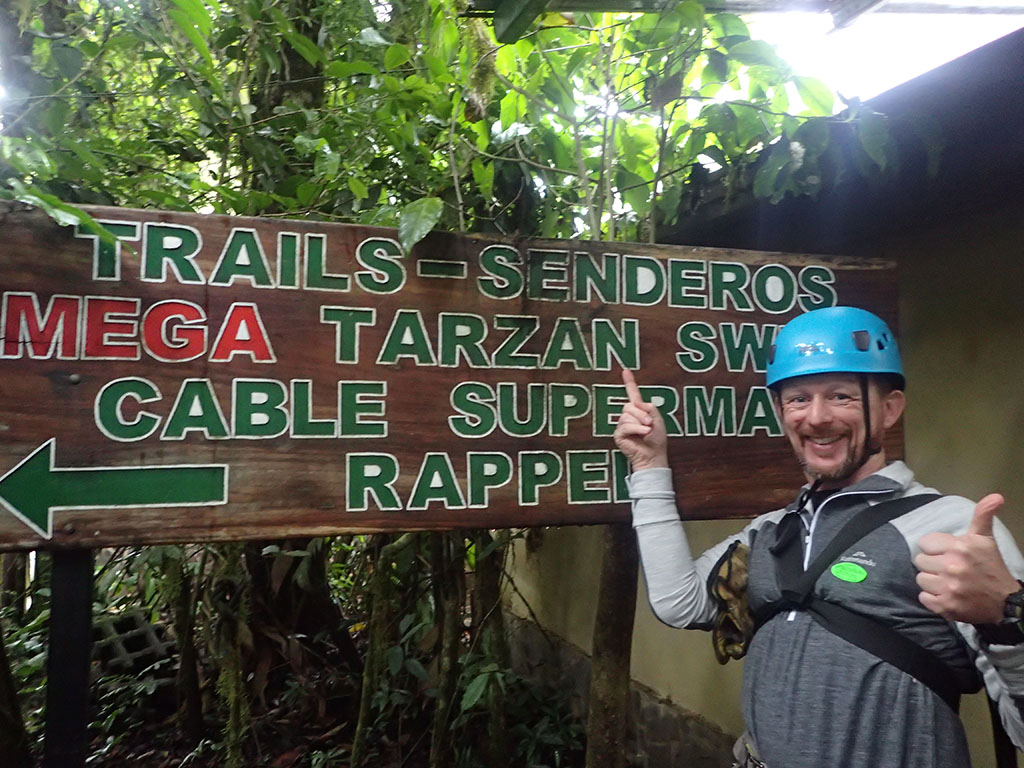 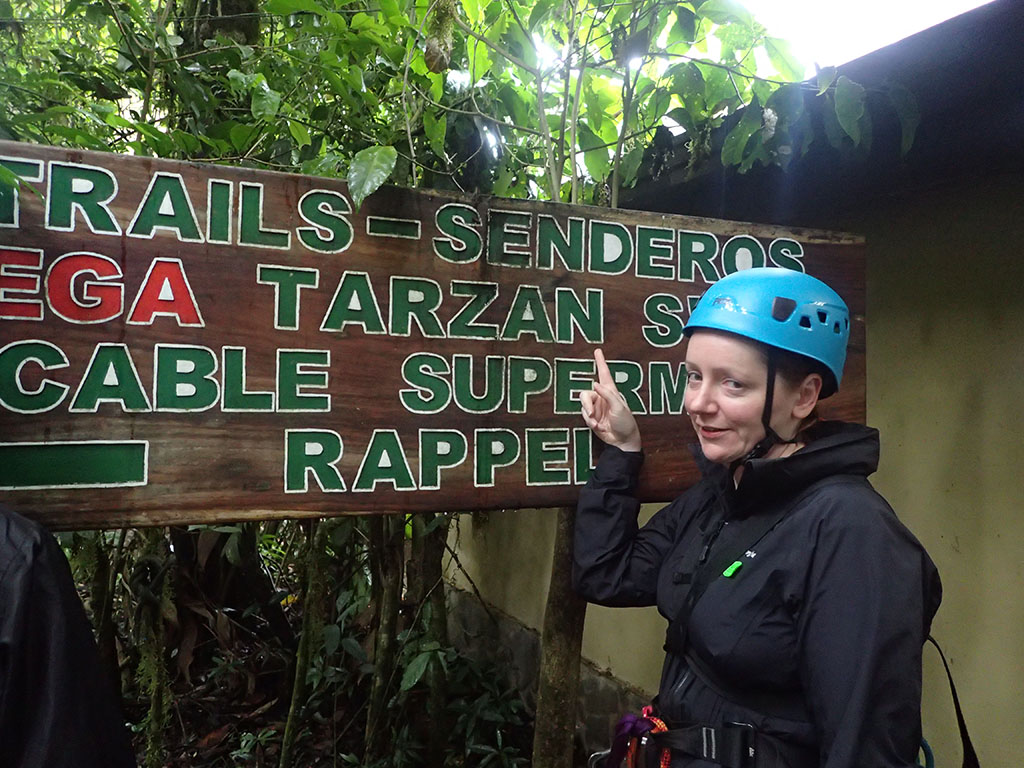 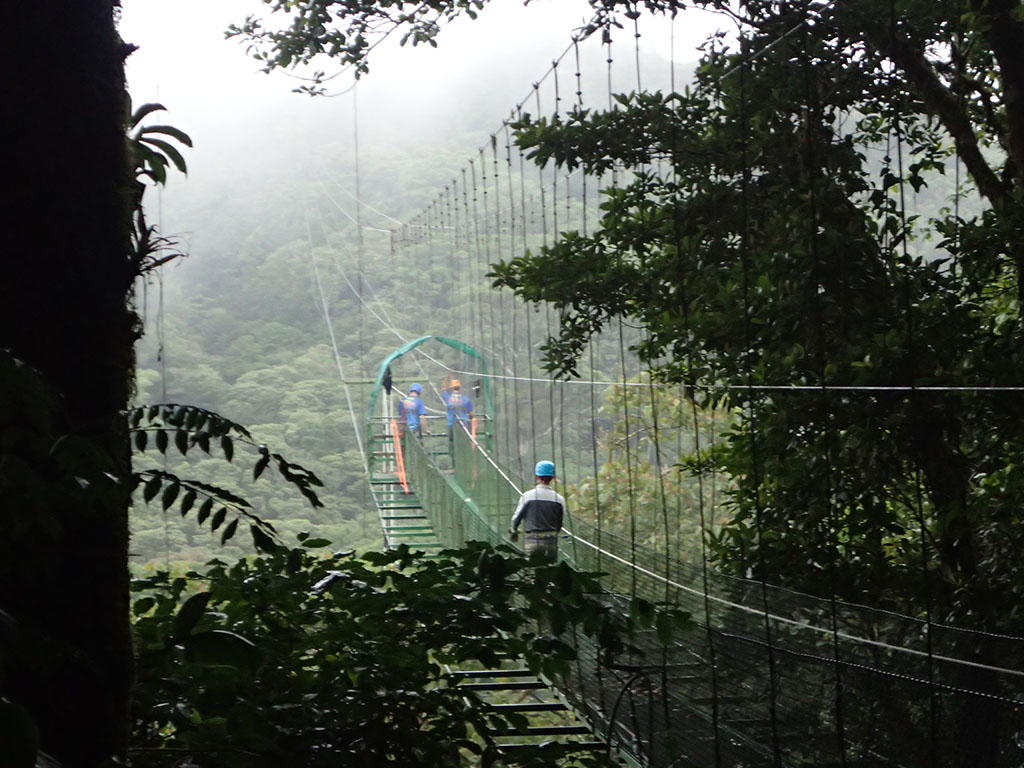 There was one last thing left to do though… the Super Tarzan Swing! Kate was not sold on the last one we did (the swing yes, spinning no) so elected to give it a miss, but I stepped up. One hooked up, they opened the gate and with a guiding hand I was off! There was a drop of about 2 seconds before the rope kicked in and it was swinging. Aaaahhhhh! So cool! 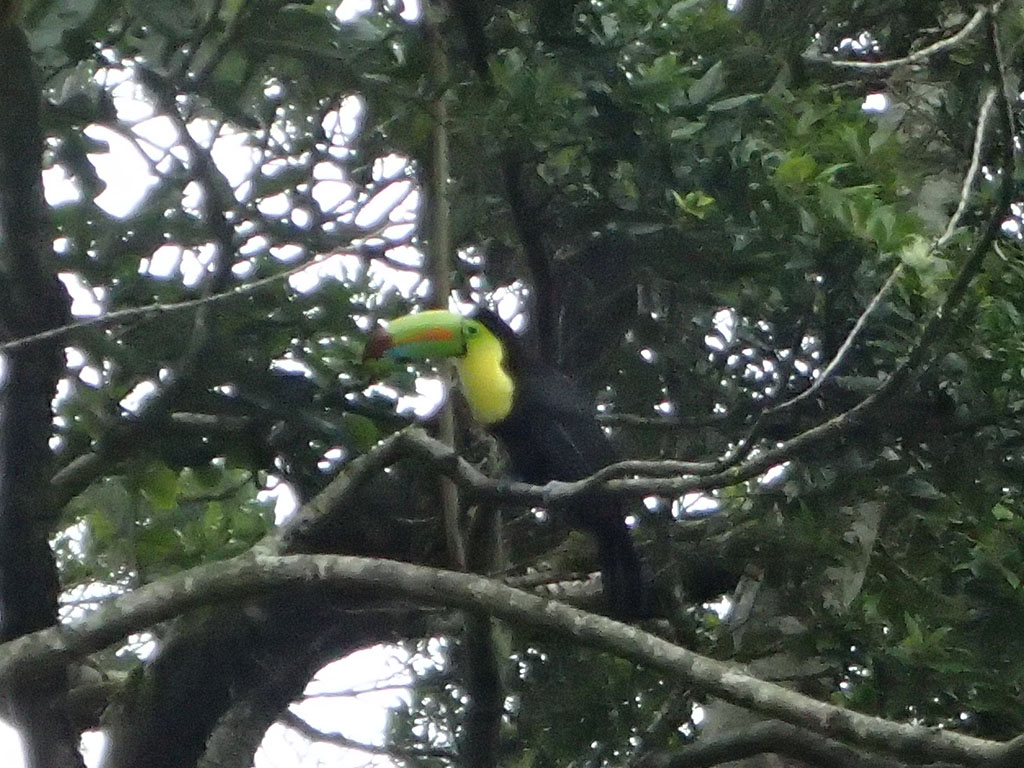 With the adrenaline pumping it was time to head back to the hotel. Kate even managed to see a sneaky toucan while waiting for me. The buss was full of our crew and many other travellers, and we were all buzzing (except for one group member who really wasn’t loving the whole heights thing) and couldn’t stop chatting and laughing about it on the way back.

A fairly low key night was dinner at a local Italian restaurant for a change, before getting ready for another travel day tomorrow.