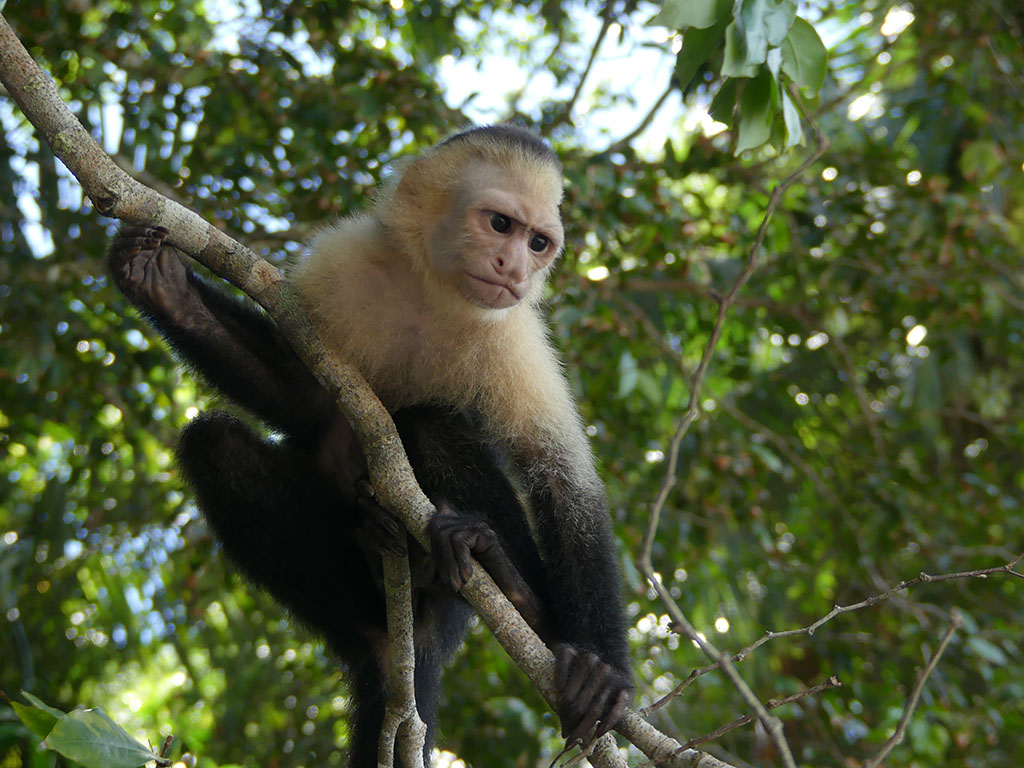 Another early morning! Yay! To be honest it was fine for me, as the sun was coming up at around 5am each morning meaning rarely was I asleep past 6am. So a 7:30am pick up for our morning activity was no problems.

It was time for our last nature activity, another hike through a national park, this time the Manuel Antonio National Park, located right on the beach. This park is the smallest in Costa Rica, but also the most visited. This seemed to be for two reasons. The first was that it is located in a very tourist heavy part of Costa Rica (who doesn’t like to be at the beach) but also that it packs a lot into a small amount of space. 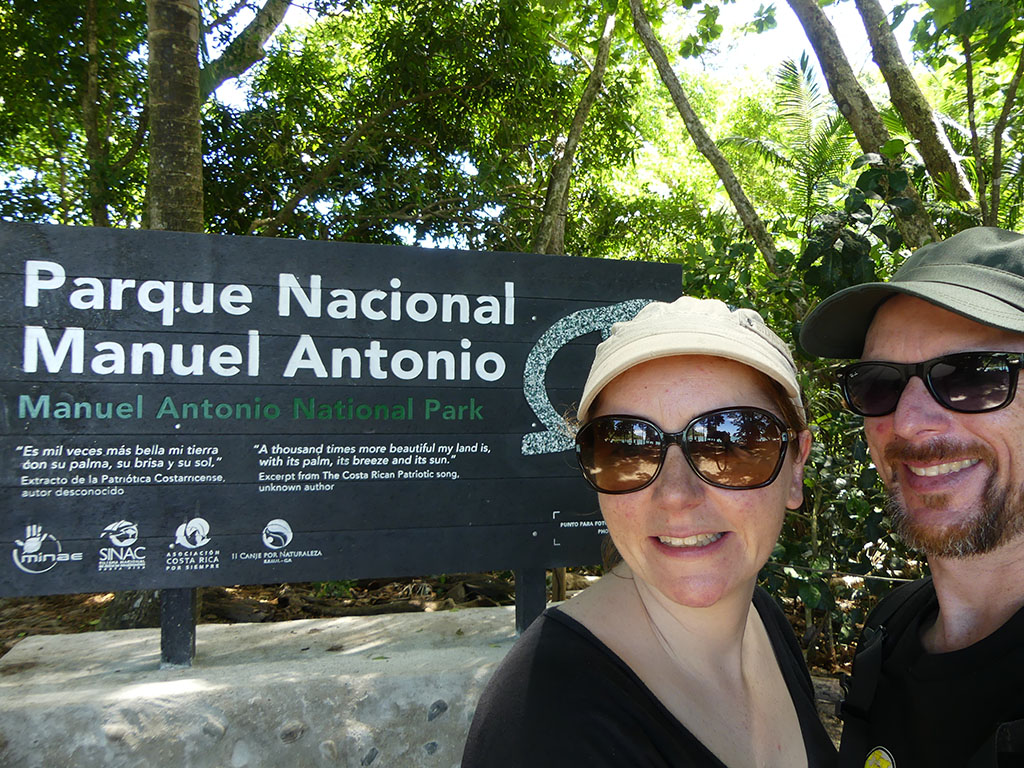 So we met our guide at the entrance and away we went. By this time Kate and I were not really looking out for any specific wildlife, as we had checked off most. Two types of sloth? Check. The four different monkeys? Check. Lizards, snakes, birds, you name it. But we were always going to be happy to find another sloth, and being in the park for just a few minutes gave us the opportunity. This one was being a bit shy, but we managed to get not a bad view of him as he sat there all relaxed. 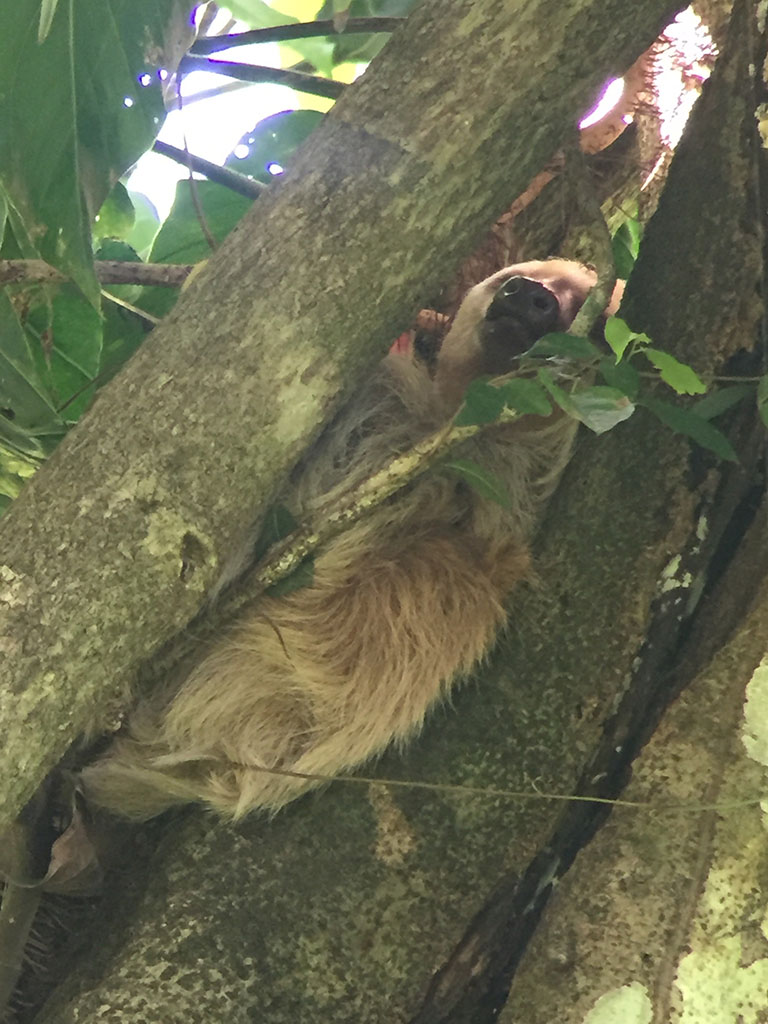 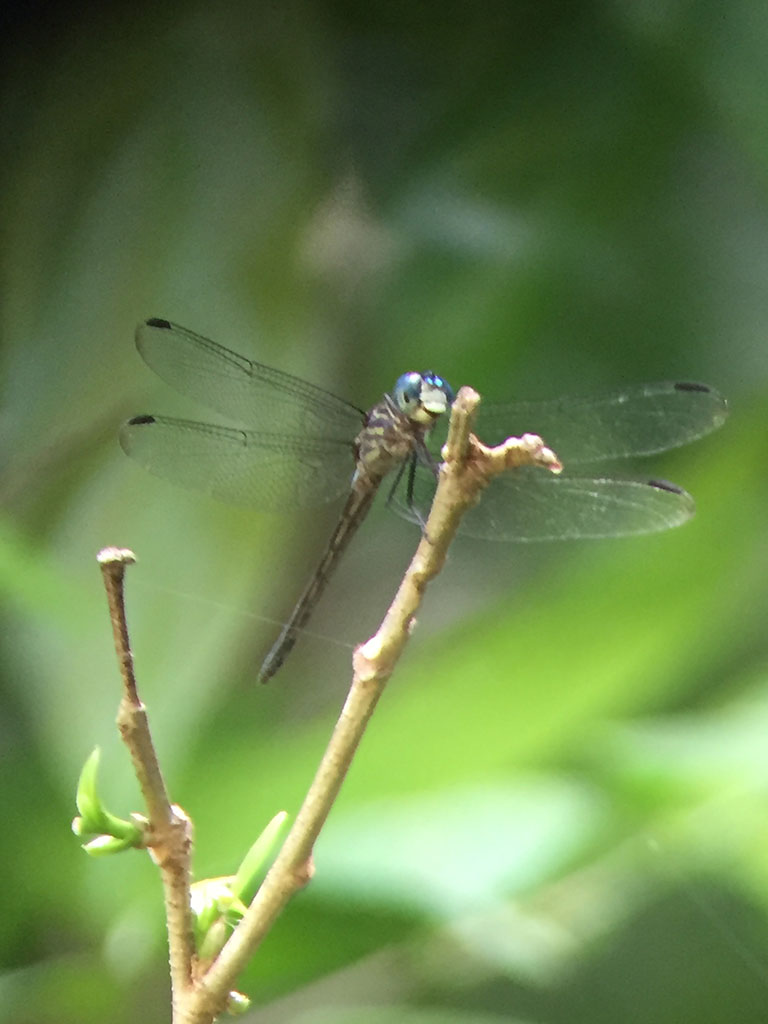 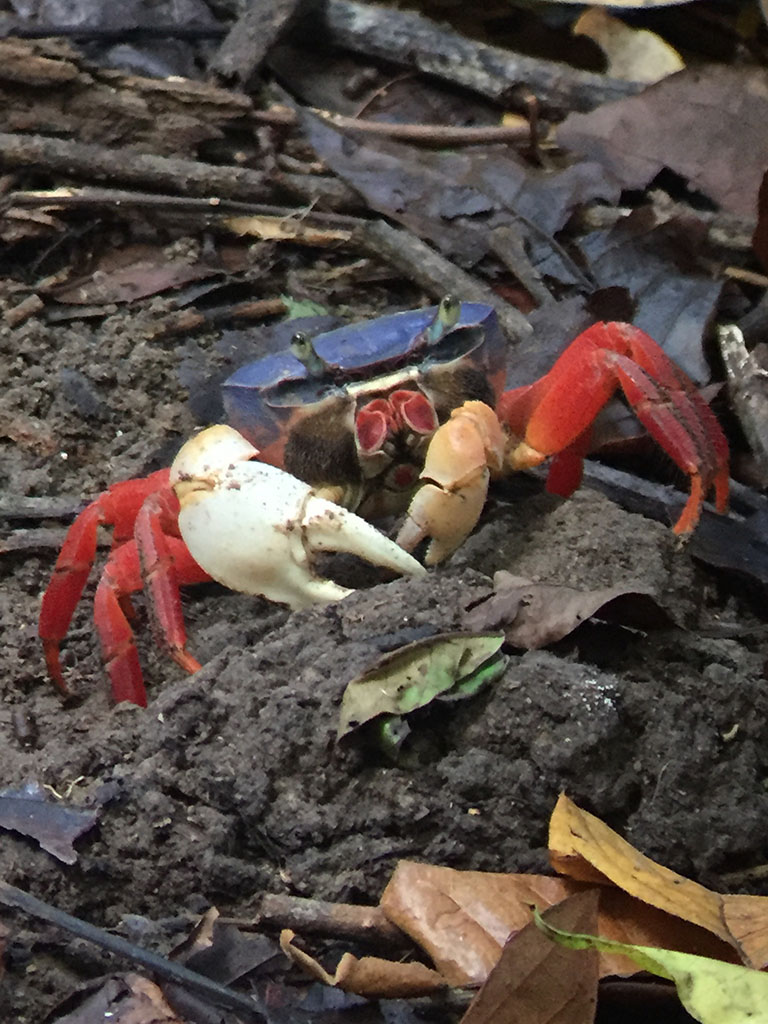 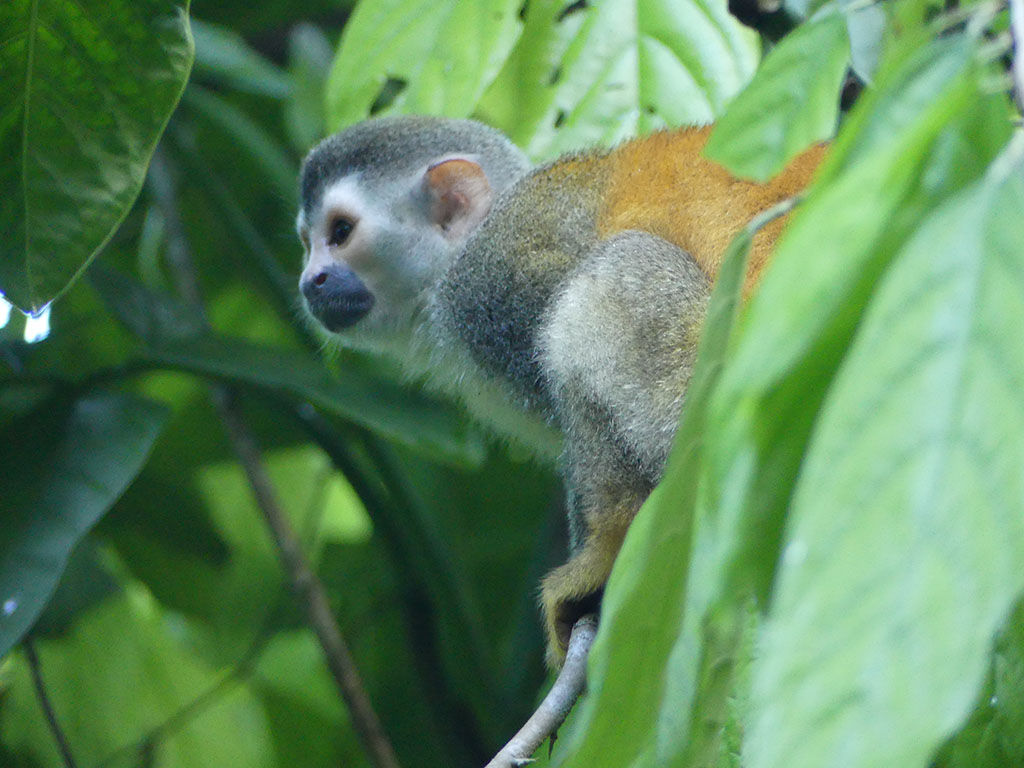 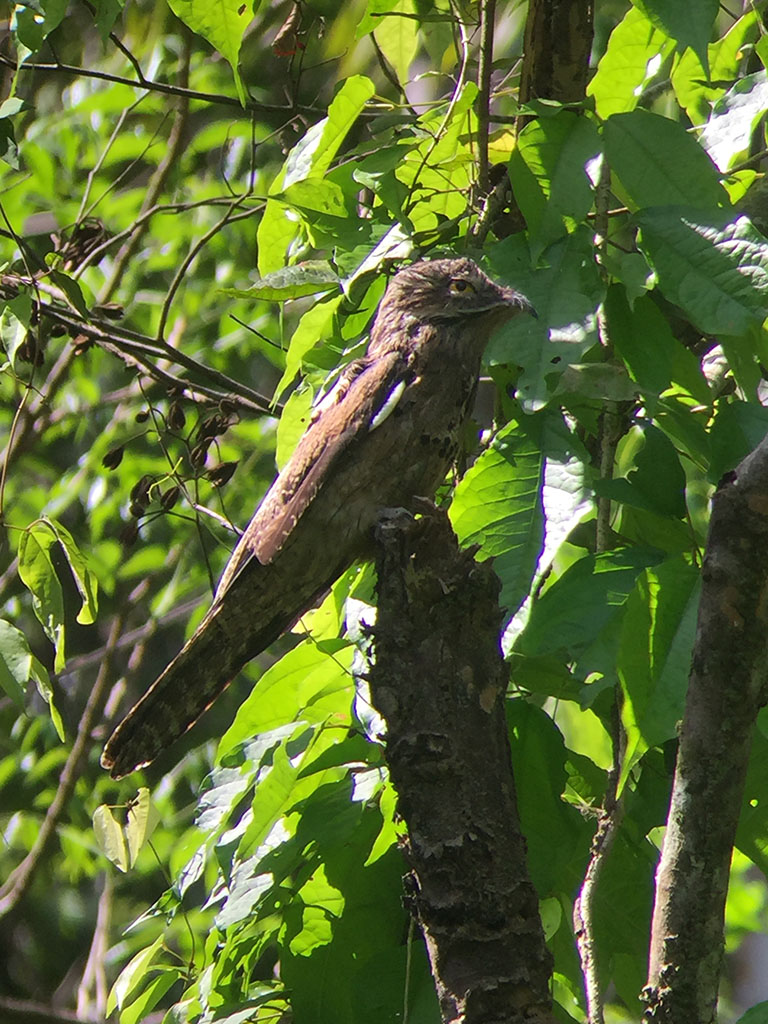 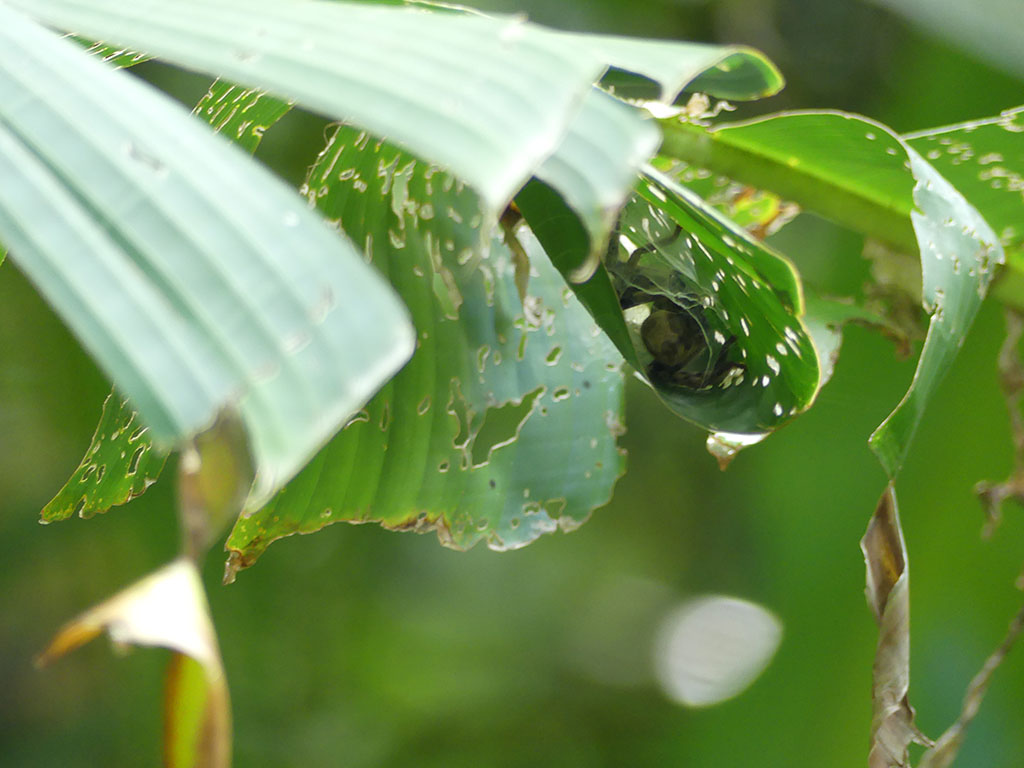 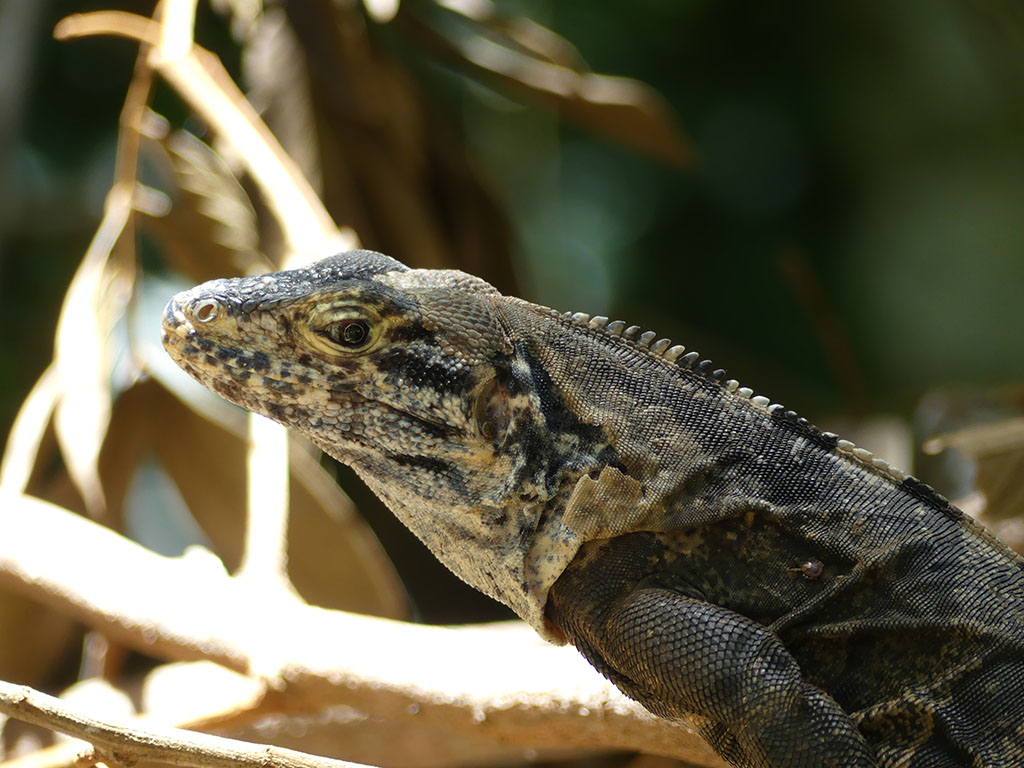 Other highlights of this trek were the squirrel monkeys (madly bouncing around), the many bright red crabs scuttling around the forest floor, the birdlife as usual, and also the quite deadly Brazilian Wandering spider that we found hiding in a leaf. 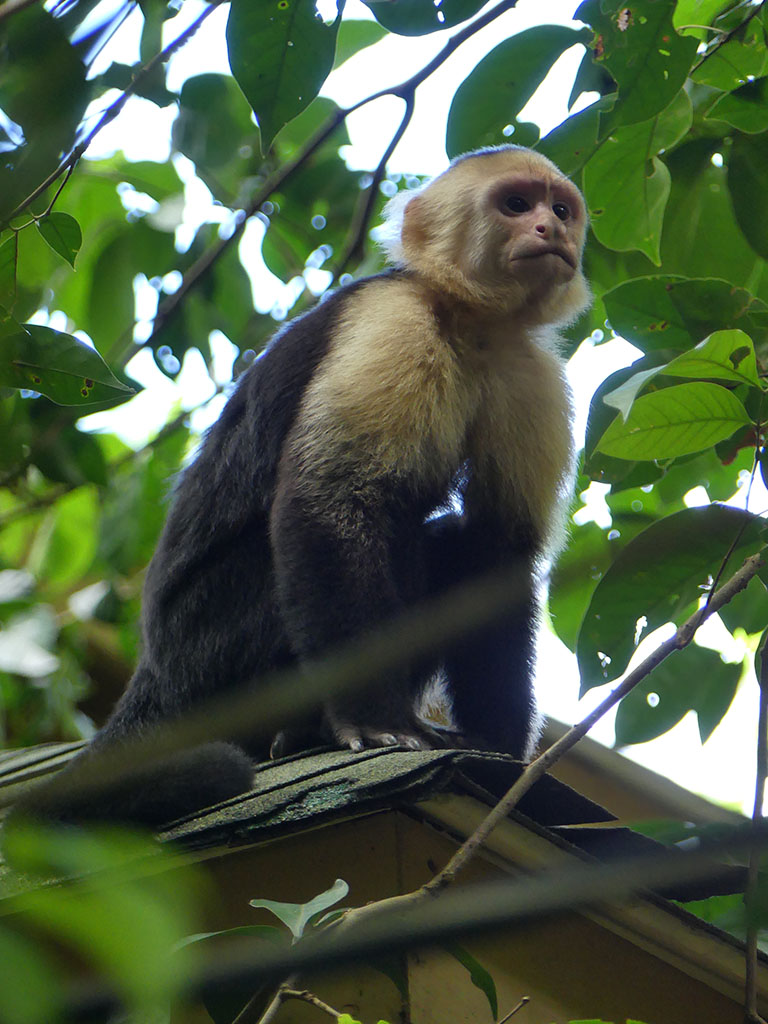 But the best and cheekiest were undoubtedly the white faced monkeys that we came across as we got close to the beach. The park has a strict no food policy and as we hit the beach it was easy to see why. These folk were not shy in coming right up to you and even opening up your bag if you were not within a few feet of it. When we got to the beach we all set up camp and in no time a trip mates bag had been opened and started to see what it could find. Thankfully the camera was a bit heavy (and not that interesting) to take. 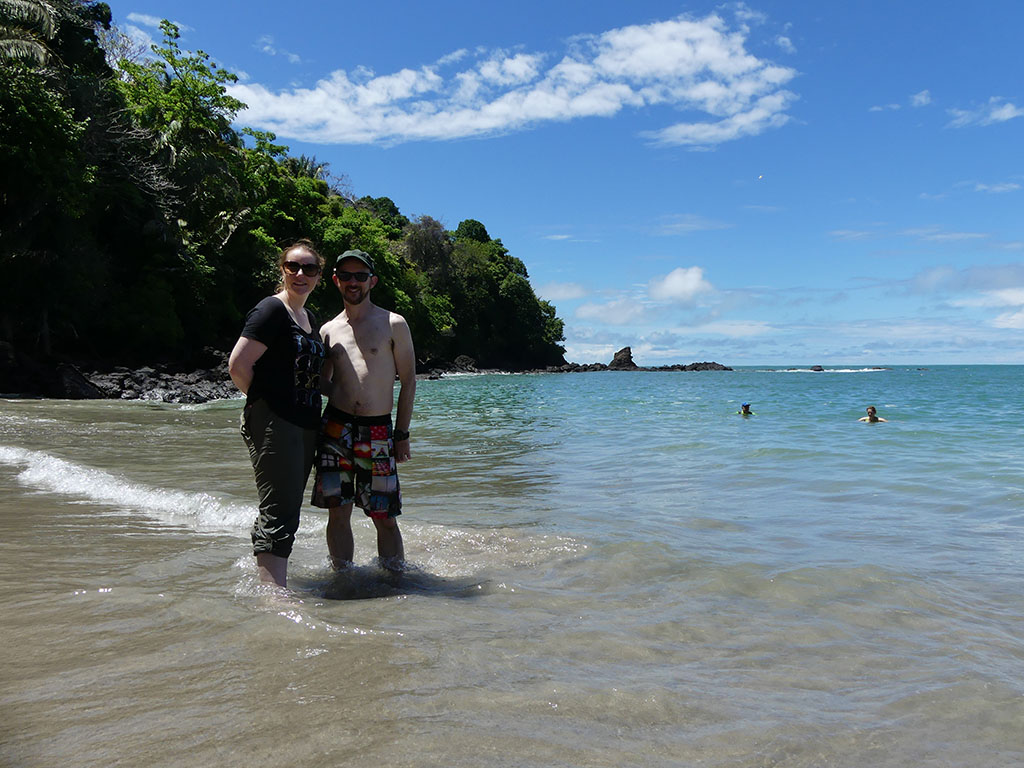 By this time it was getting pretty warm and the beach at the other end of the trail was fantastic, quite a bit better than the public beach we were at yesterday. This was almost lagoon like meaning there were less waves and clearer water. I wasted no time getting out there and having a dip.

It was approaching lunchtime so it was time to head back out of the park. For the afternoon Kate and I were going our separate ways. The opportunity had arisen to spend the afternoon on a boat on the Pacific and I couldn’t resist. Given Kate’s aversion to boats, she, along with many others, opted to relax for the afternoon, but Andreas and 4 others from the tour got whisked down to the marina and on board a trimaran for an afternoon on the water. 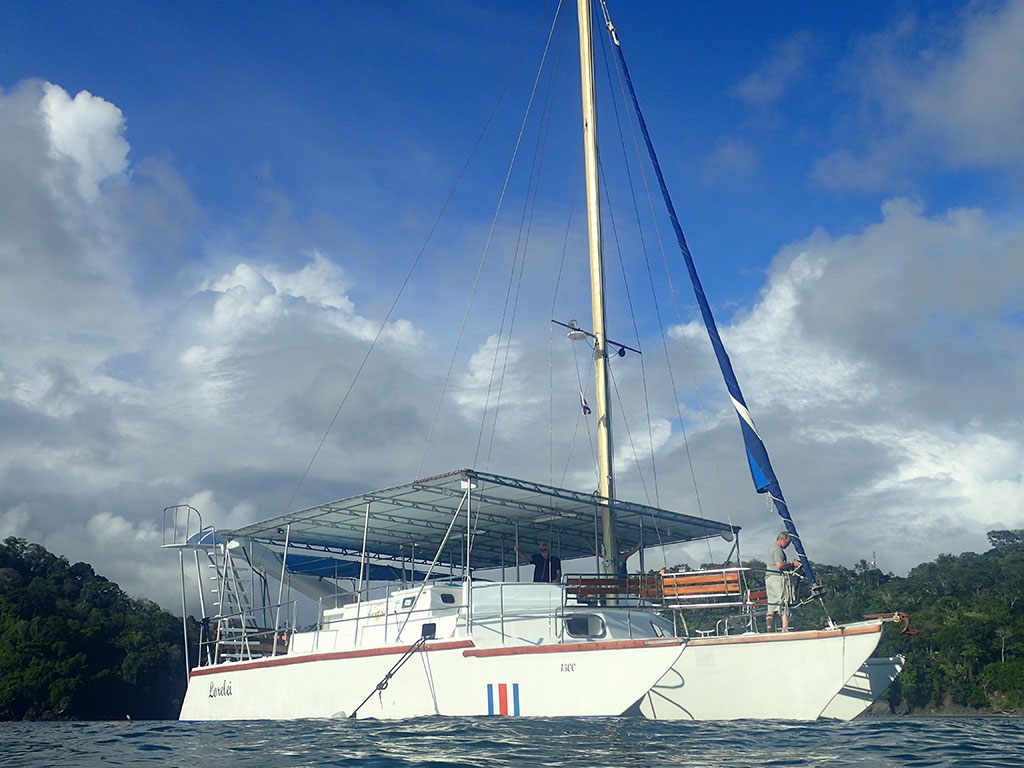 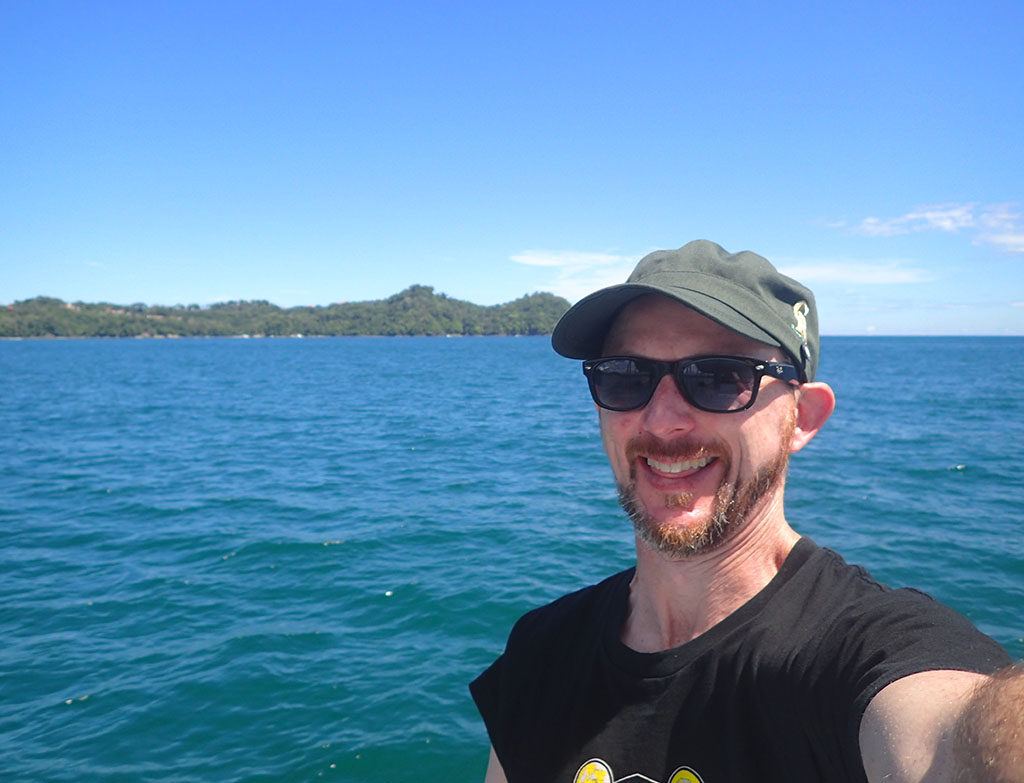 With a nice lunch of red snapper and some rum cocktails to start, it was off on the water. Clouds looked ominous in the distance but never really came our way. The water was a little choppy (smart move Kate) but it was glorious to be on the water under bright blue skies. We made our way around some coastline and then headed out. We were looking for whales or dolphins, but alas, they were all hiding today. 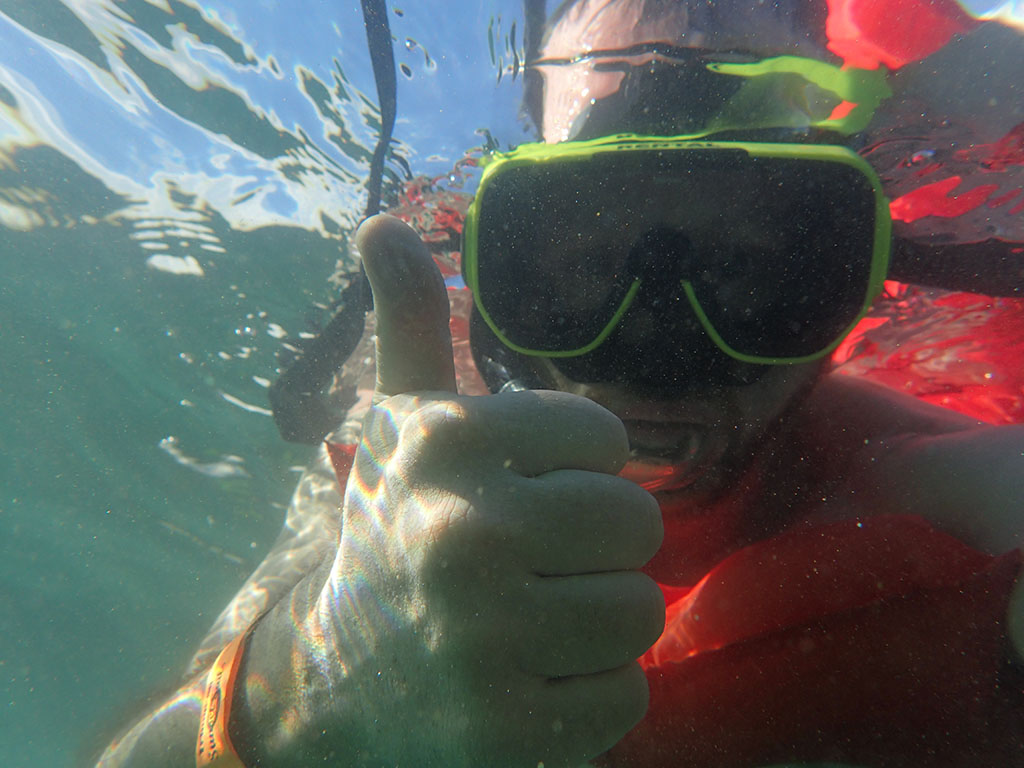 A couple of hours and a few drinks later the boat settled not too far off shore so we could do a bit of snorkelling. We found a spot with a number of schools of fish, so it was great to jump in the water and explore. The water was a bit cloudy so it made seeing things difficult, but the water was warm, and it was just nice to swim about, seeing what we could find. Someone spotted a turtle, but the little fella evaded me. 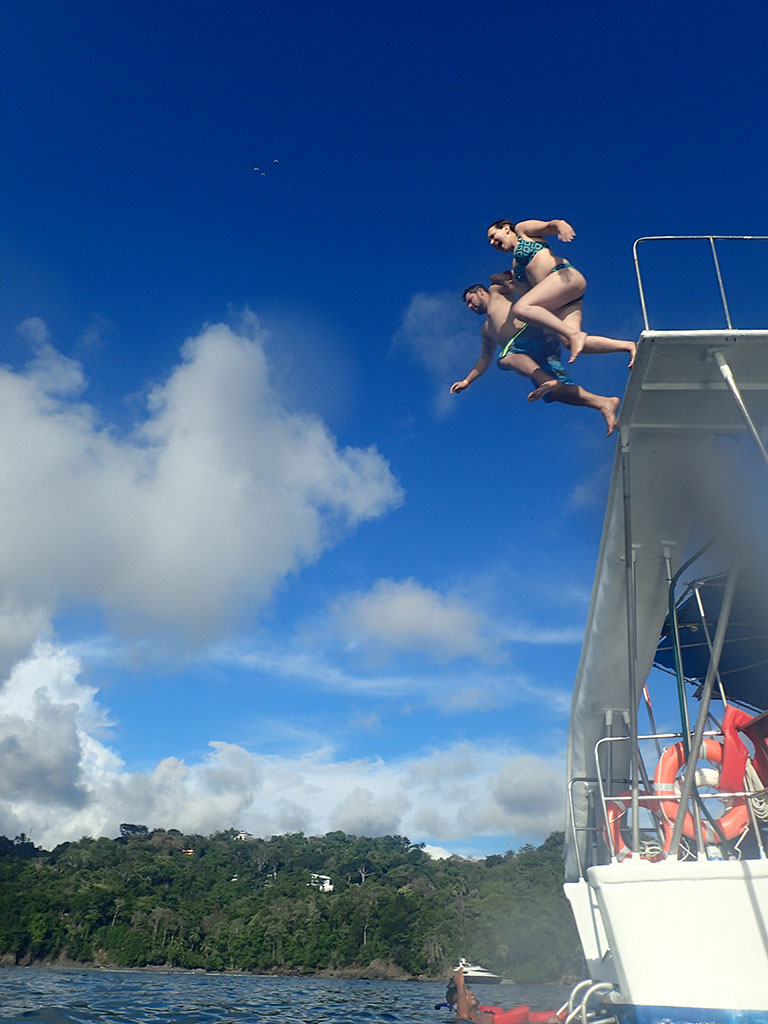 two of our troupe take the plunge

Now we were nice and wet it was time for boat shenanigans. There was a roof on the boat… the perfect height for jumping off! It seemed a bit of a ways up when looking but down, but with no hesitation many of us did the jump off. Woooooo! So much fun. There was also a little waterslide on the back for even more thrills.

Alas it was time to head back into shore. I don’t see myself as a beach or ocean person, but it is great to be on the water. In no time we were back on dry land and at the hotel to catch up with the rest of the gang. 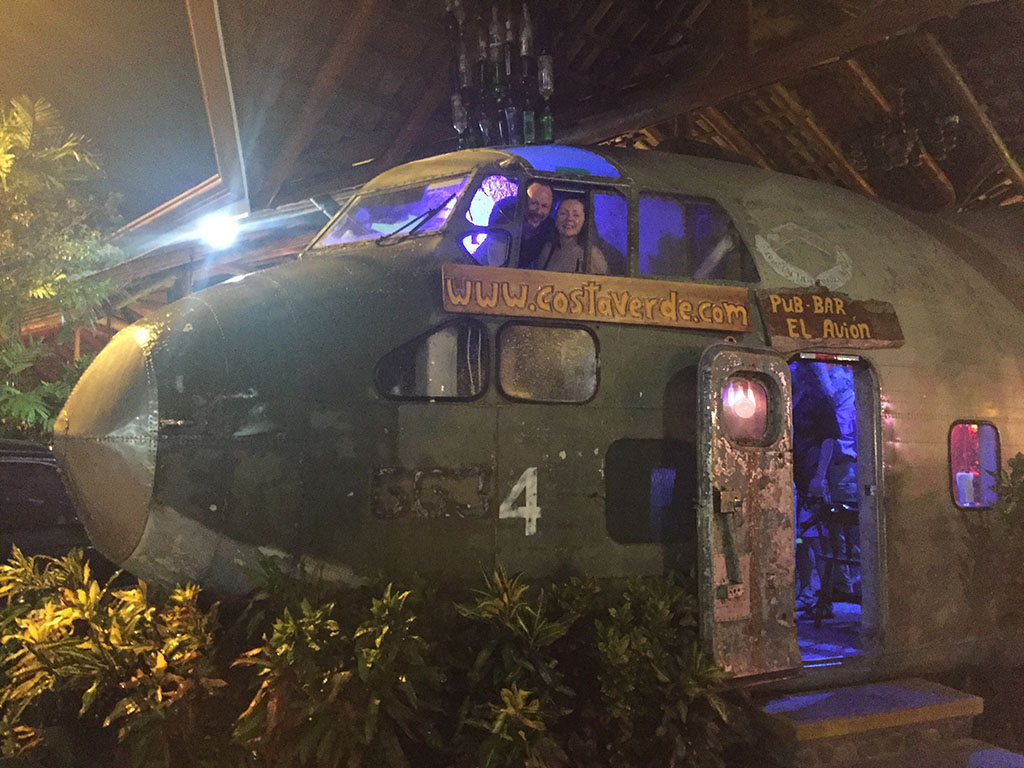 some of the better airline food i’ve had

Dinner was at an interesting place just down the road. It was at El Avion, which was a restaurant and bar built using an old Fairchild cargo plane. So we wandered into the restaurant through the plane, and it even housed inside a cool bar. Dinner was more local fare, and we could even get a snap inside the cockpit.

Given we only had one more night together after this, some of us decided to kick on a little. A nearby bar apparently had free salsa lessons, so in no time at all we were on a dancefloor and getting our salsa on. It was no surprise to see that my salsa lessons from Antigua a few years ago had all but deserted me and that my dancing shoes were both left feet. Well, maybe not that bad, but my spins left a bit to be desired. 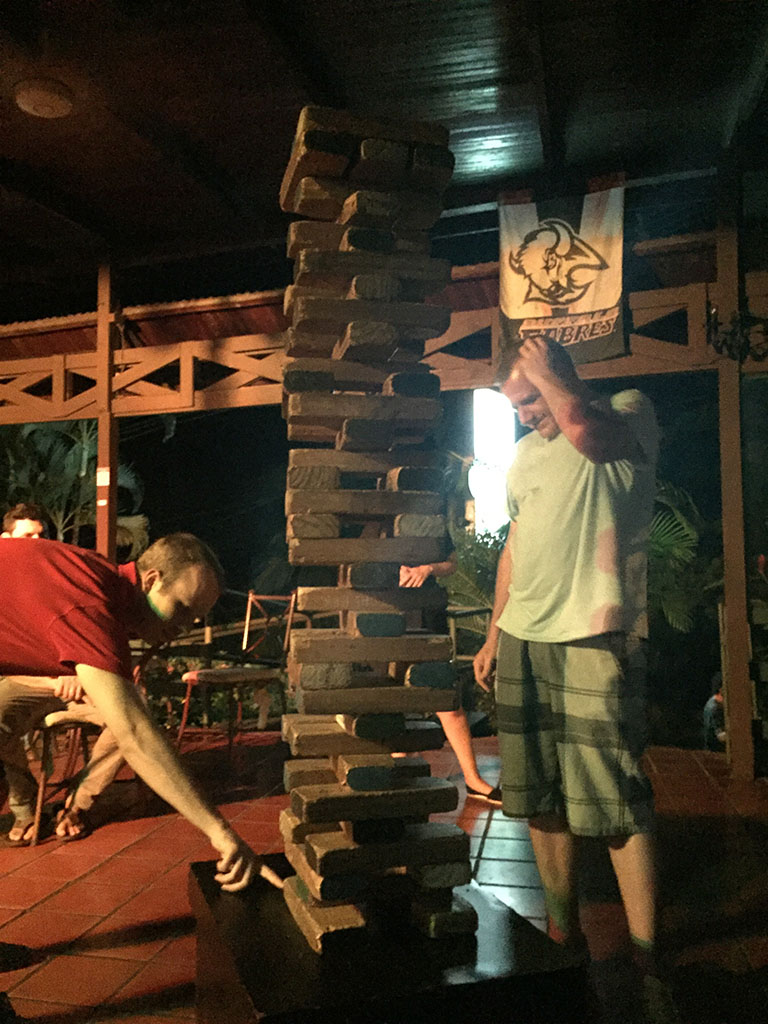 yes, it was that tall

After getting hot and sweaty, and needing a beer break, we spent the rest of the night with some Foosball (or “Kicker” in Germany as I found out), as well as an amazingly epic game of Jumbo Jenga. The set was huge and with about 9 of us playing, the game went for a LONG time. It got to the point where placing the pieces on top was getting difficult for someone as vertically challenged as myself. It was tense by the end, and unfortunately for Dan, he could remove the piece but not place it on top and down it went. Good times.

Midnight had arrived, and it was time to head back for our last night here in Manuel Antonio. Tomorrow it would be back to San Jose and time to wind things up.