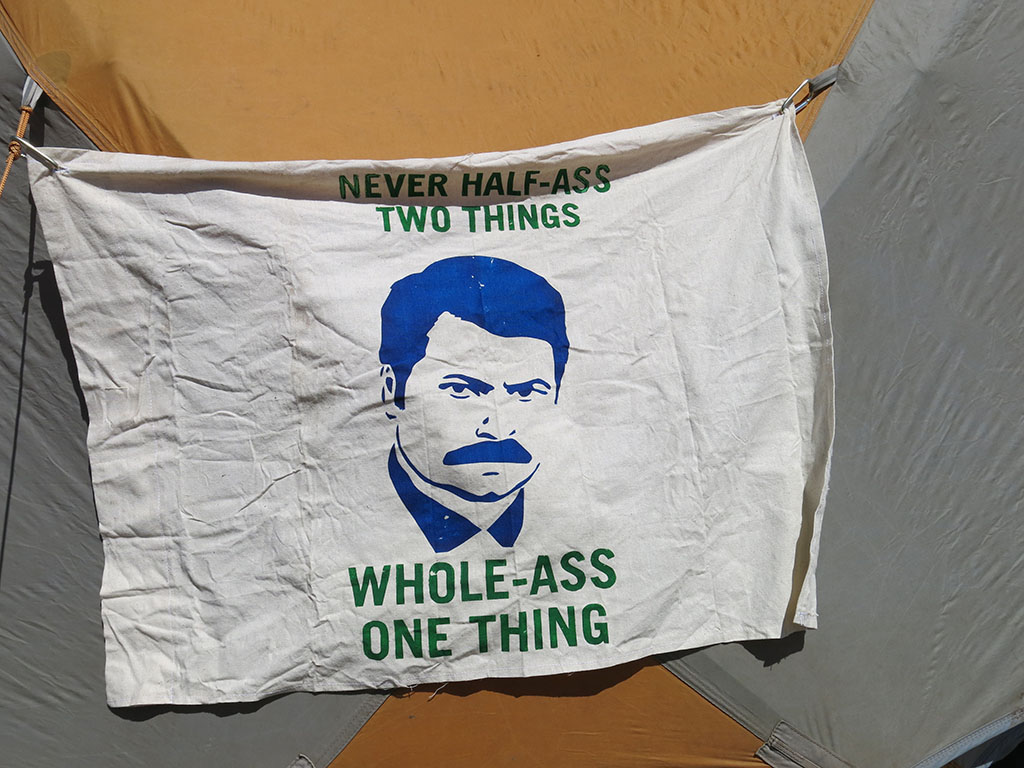 Day two began with a 6:30am wake up call, although both CC and I were awake. I slept not too badly, just a little restless and not quite a deep sleep. Put that down to excitement, jetlag, and being on a thin camp bed. But I was nice and snug in my sleeping bag, and I did feel fairly refreshed, so all good. Chatting with Tony that morning he told the story of how he woke through the night to use the bathroom to find a park ranger watching over the camp AK-47 in hand. Apparently that was normal… I was not sure whether to be worried or not! 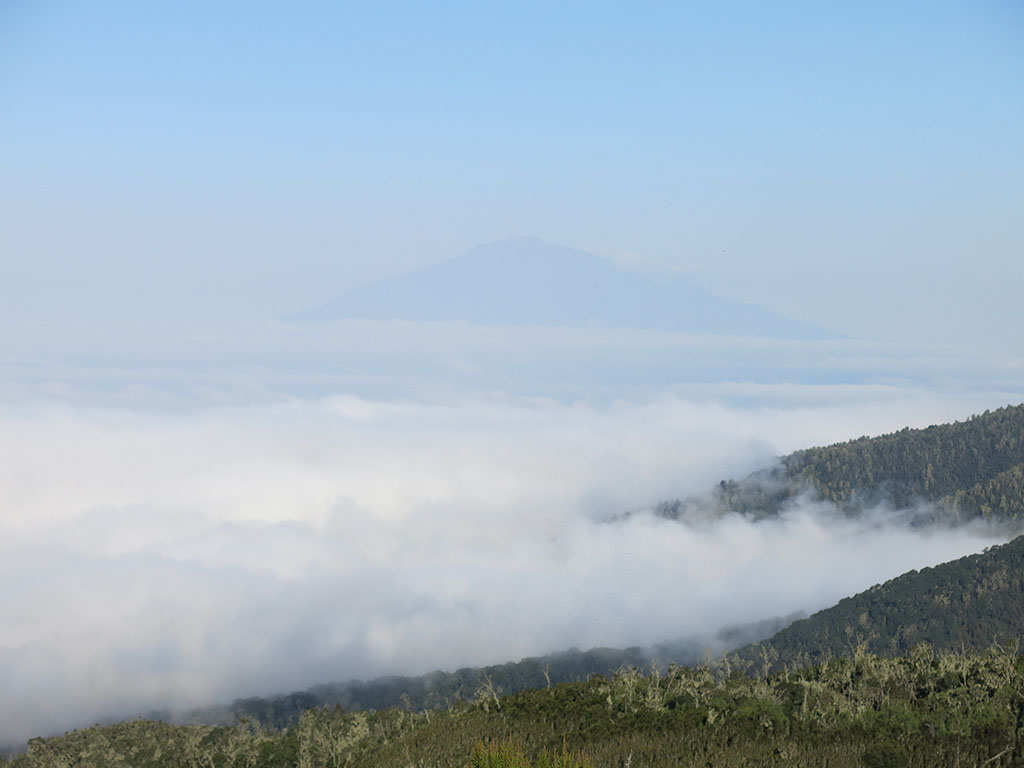 we woke up to this

Breakfast was another great meal. We kicked it off with porridge, and then eggs, just how we liked them! I opted for scrambled with some cheese. Yep, I had choices. Toast, paw paw, and coffee round out the sustenance for the morning and getting us ready for onward and upward.

We were sorted fairly quickly, and by 8am were leaving the camp. We bid adieu to Filipe and Tony, knowing would see them on the trail or at next camp, and off we went. Conditions were amazing… it was beautiful and sunny, no sign of the rainy season that finished up earlier that month. All we had was bright sunshine. 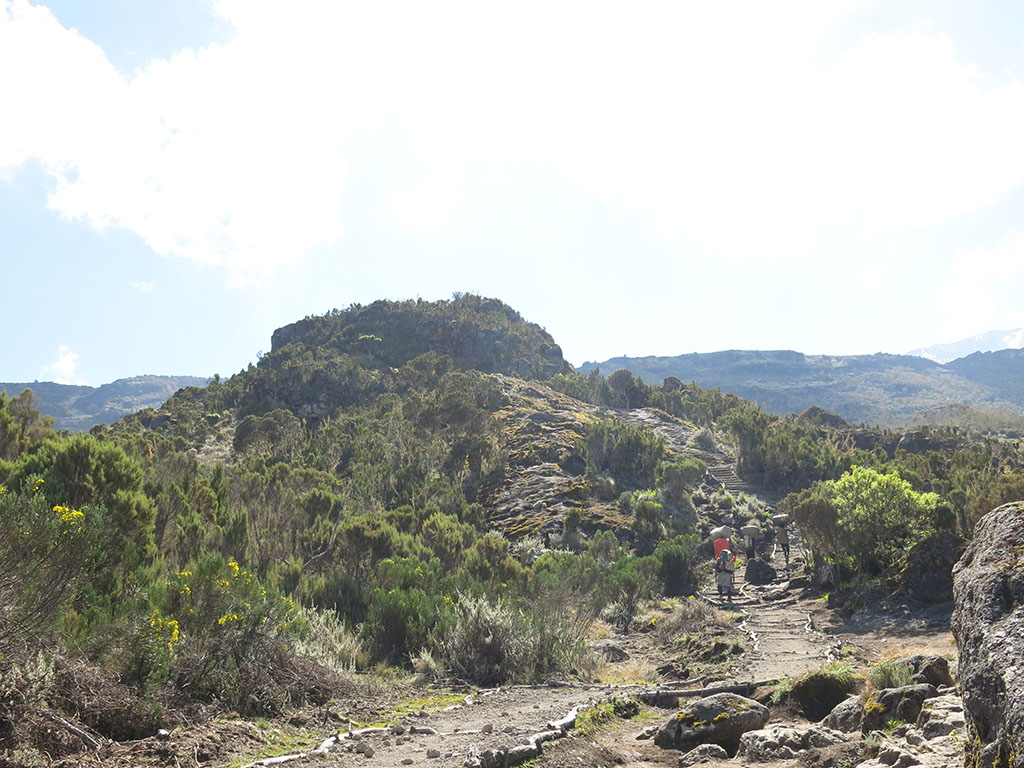 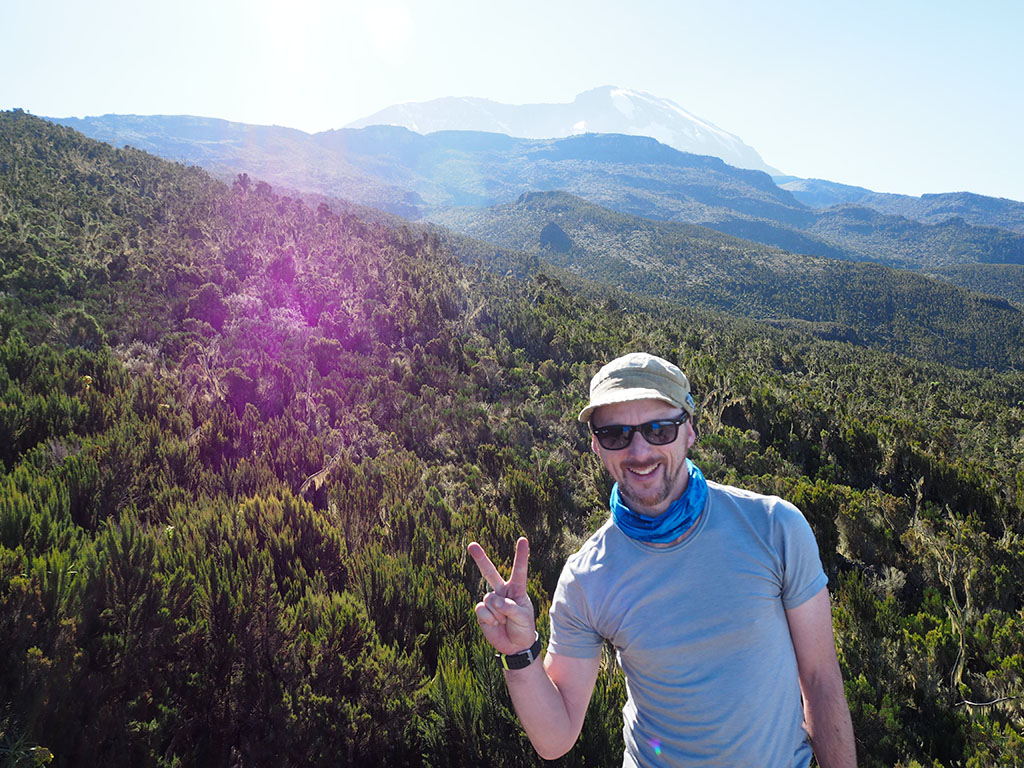 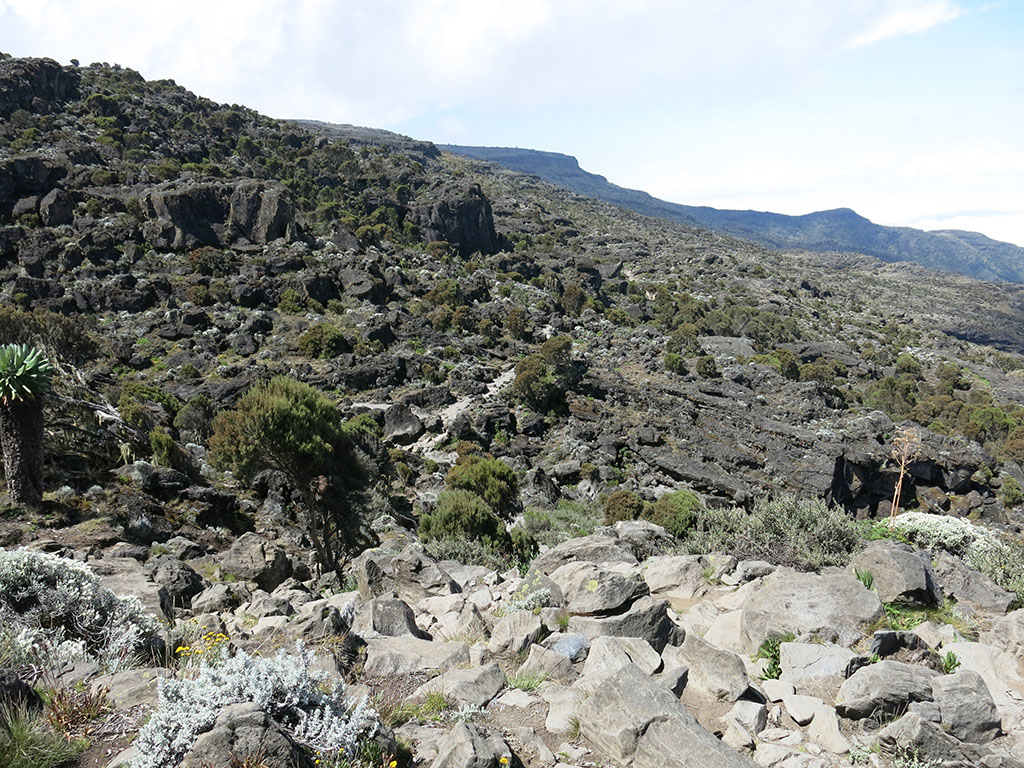 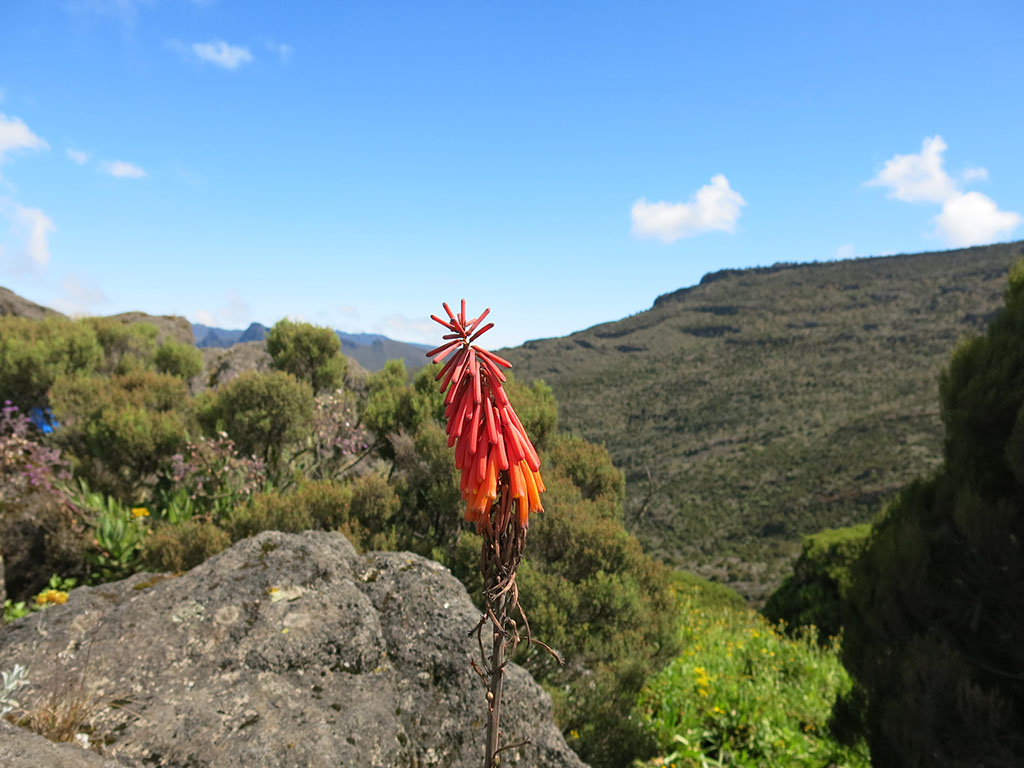 The trail was very steep to start, and as such we hiked along quite slowly. Mhina led the way although he asked both CC and I to take turns in leading, allowing us to set a pace we were comfortable with. The terrain was instantly different to yesterday, with the rainforest having made way for more scrub like conditions and rocks. We were slowly moving above the clouds and had amazing views of Mt Meru as we made our way. Meru would look over us quite a lot during our trip. 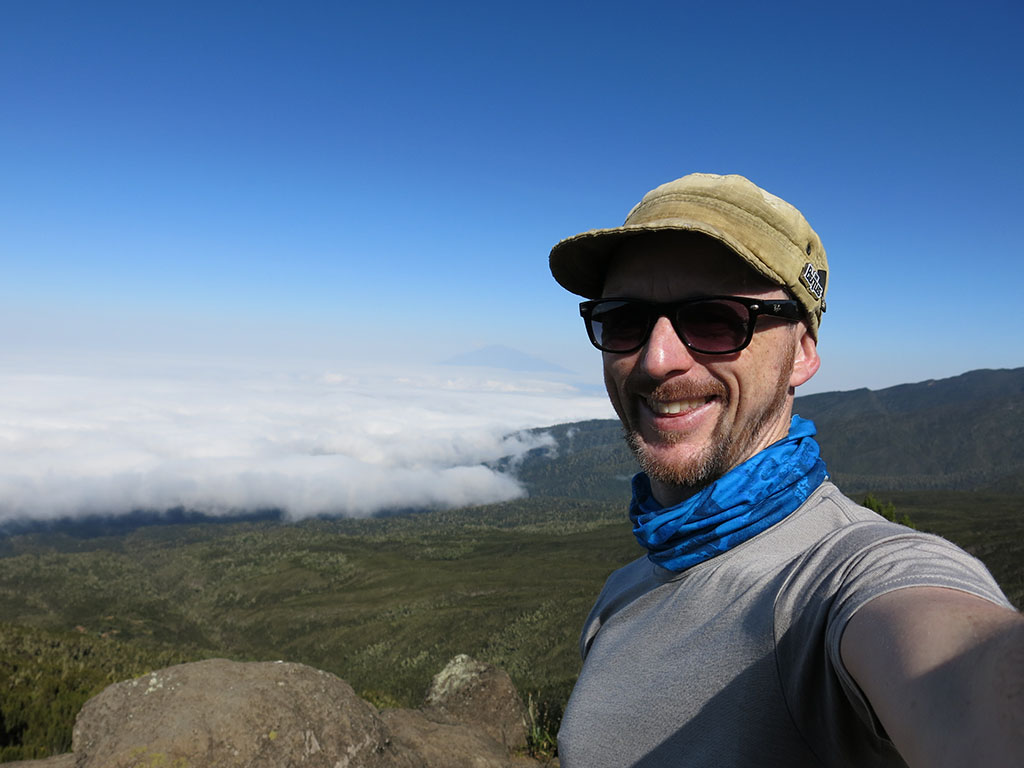 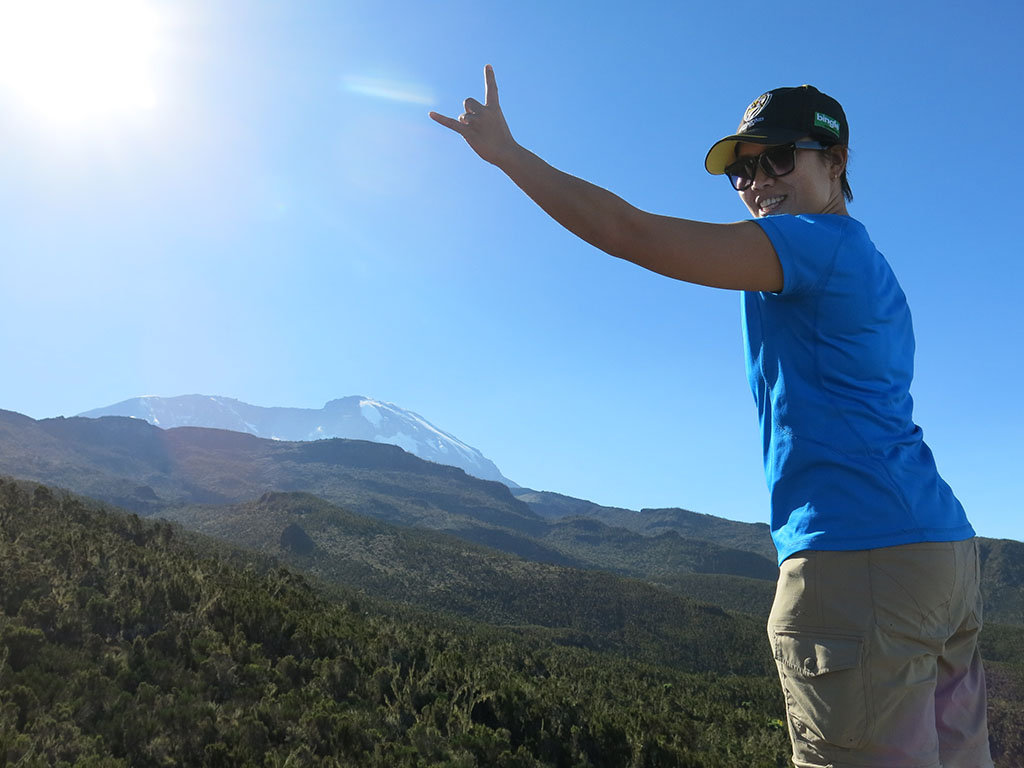 We made frequent stops during our days hike. Many times it was to soak up the amazing vistas we were being treated to. Often we would just be focused on the hiking and making progress, so it was important to take stock every now and then that we were climbing high over the African landscape. The stops were also good to take a quick rest. It was quite a steady, relentless upward hike, and we found that even a stop for just 5 minutes would reset the both us and we would be feeling tip-top and ready to keep going. 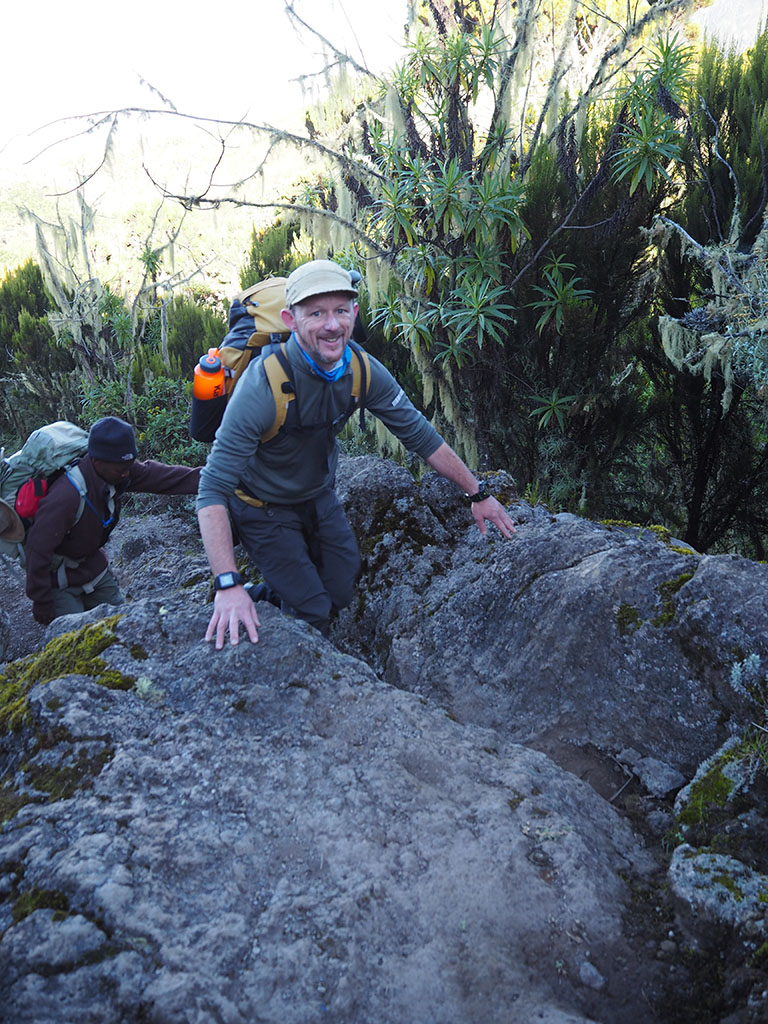 a bit different to yesterday

We also a new type of terrain in the latter stages of the days hike… rocks. To be honest I was not sure exactly what the trails would be like, but after just two days we soon found out they would be quite varied. This last hour was clambering over rocks… definitely not your typical hiking trail! During this scrambling we reached peak altitude, about 15 minutes from camp. 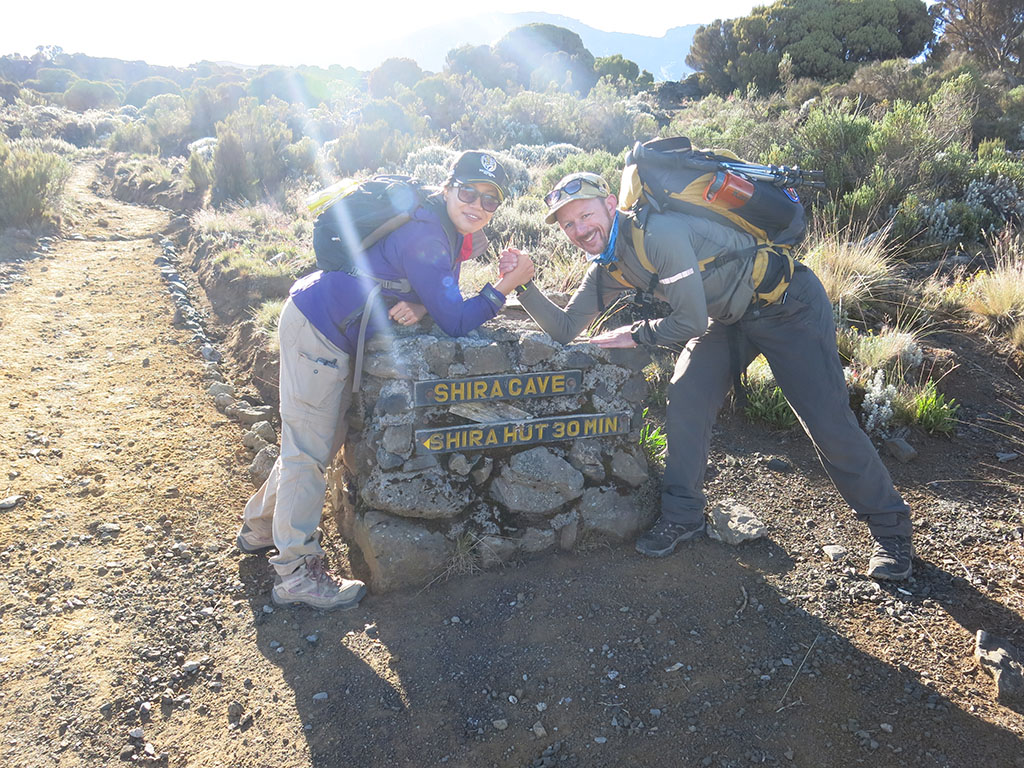 We got into camp around 12pm, a nice early finish. While we did not do huge amounts in terms of duration, we had ascended about 900m, which for acclimatisation we didn’t really want to do anymore. Part of the reason for choosing the Machame route was its better success rate and its focus on acclimatisation. 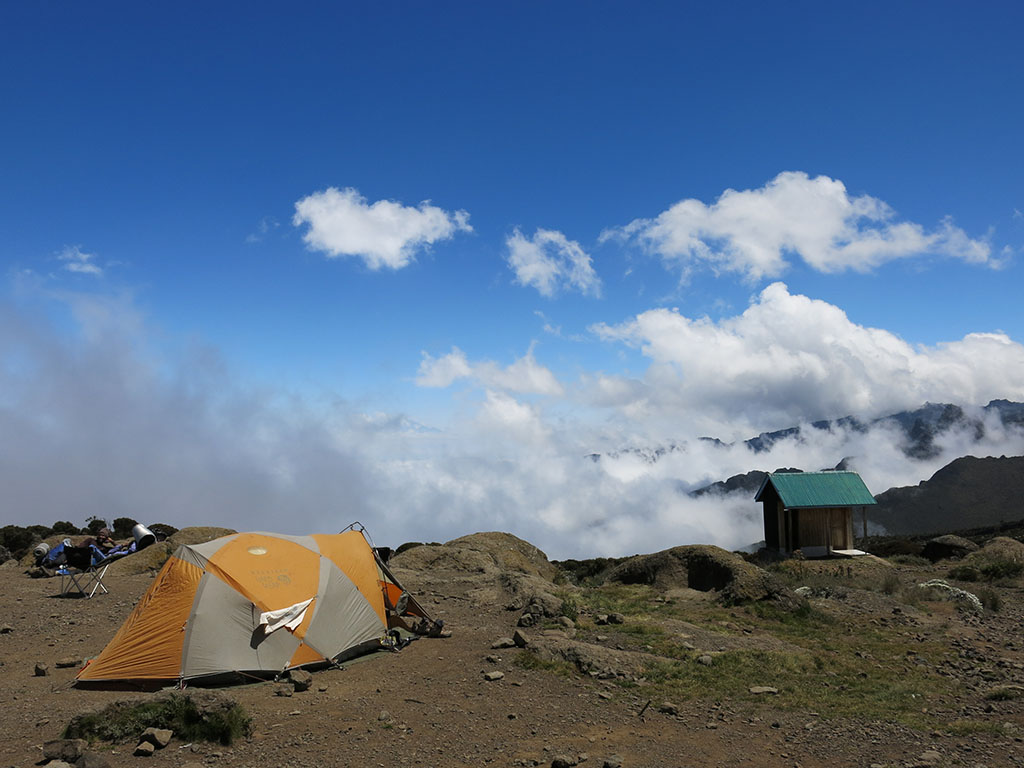 not a bad campsite

We headed to the registration hut and signed in. First! We had beaten everyone else to camp. Well, except our support team who had powered ahead and had everything set up. They set us up in a sweet spot, right on the edge of a cliff, so we could look out over the valleys of the mountain. We didn’t see the ground below however, as we were now above the clouds and could just see lovely white pillows below. We even had a camp toilet just nearby, the first of many loos with a view we would have on our trip. 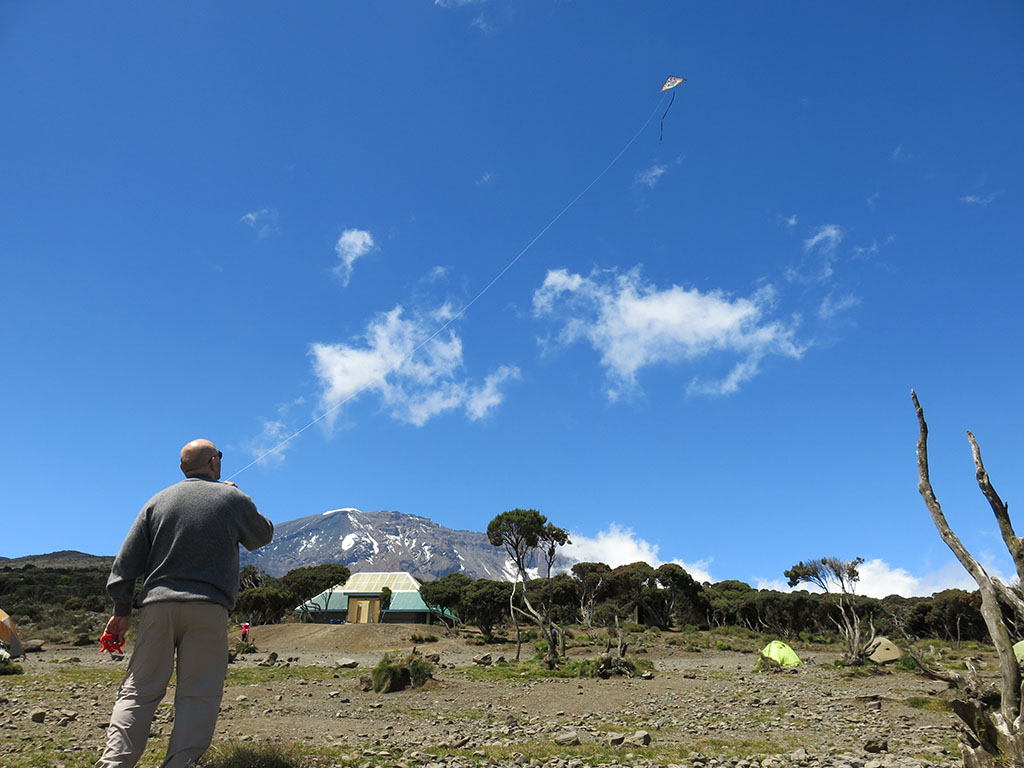 fly a kite? why not.

The other hikers wandered in over the next hour and settled in. The weather was nice and sunny (if a touch windy) so most were out and about. Tony busted out a kite he had been carrying (why not I guess) and proceeded to run an impromptu kit flying session. Weird I never thought to bring a kite 🙂

Having settled in Rashili our chef delivered another stellar lunch, this time carrot soup, as well as yummy toasted sandwiches of capsicum, tomato, onion and cheese. I could get used to this.

The arvo was all about relaxing at the high altitude to let our bodies get used to the low oxygen levels. We chatted for a long time with Tony and Filipe, as well as our new Canadian friends. There was something about sitting on the side of a big mountain chatting to fellow intrepid travellers from around the world. 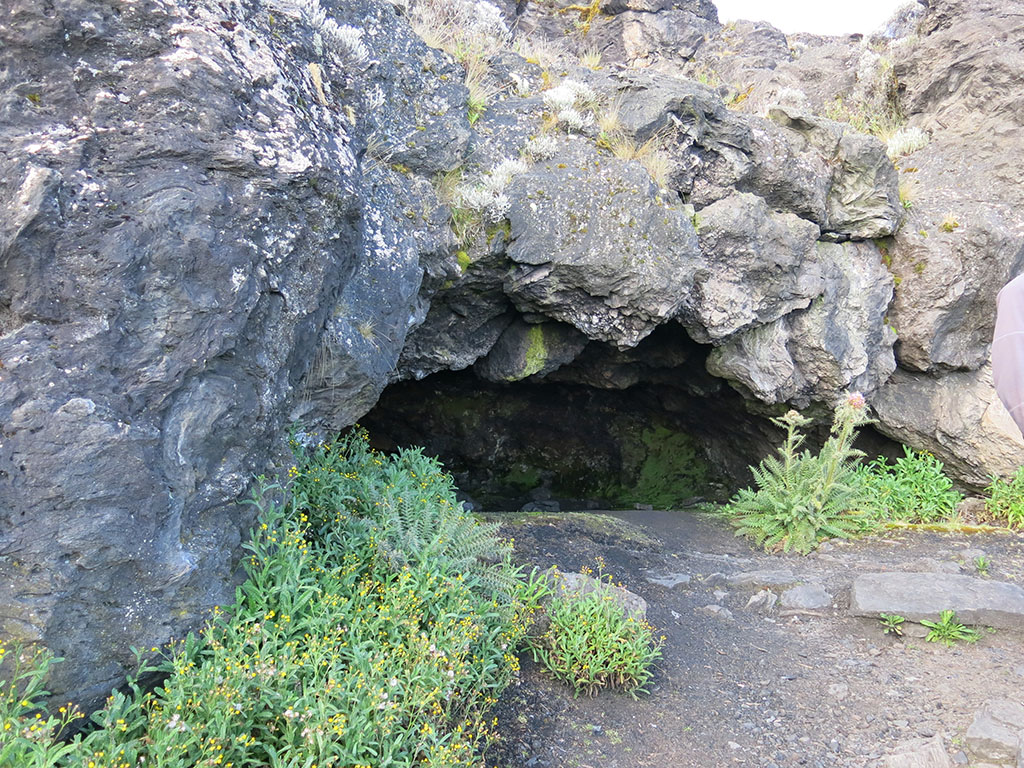 At 4pm Mhina and Aris led us on a short walk. This was in part about more getting used to the altitude, but also to see some sights that were in the vicinity. We checked out the nearby Shira caves, which in days gone by some porters would use to sleep in. Contrary to my expectations, that were actually nice and warm! We also wandered up to a nearby ridge so we could look out over the nearby plains. While some animals would apparently make it on to those plains, all we were greeted with were the massive ravens that seemed to follow us everywhere we went. The ridge also seemed to be the first place where large pile of rocks greeted us, a sight we would grow used to over the coming week. 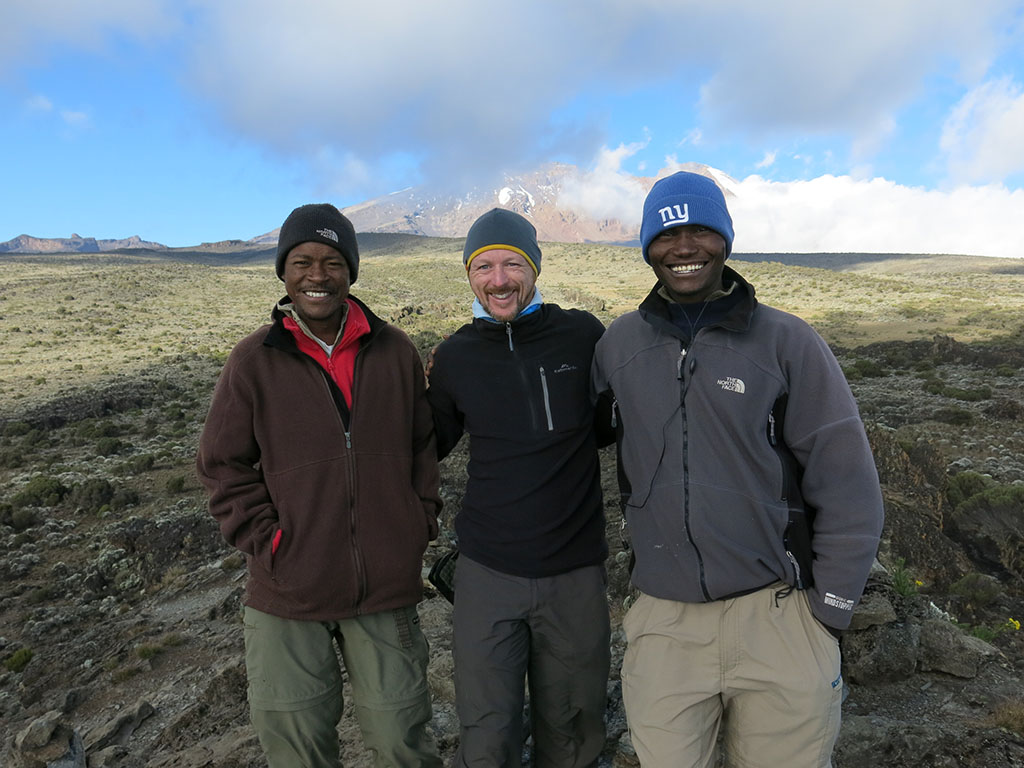 hanging out with my trusty guides 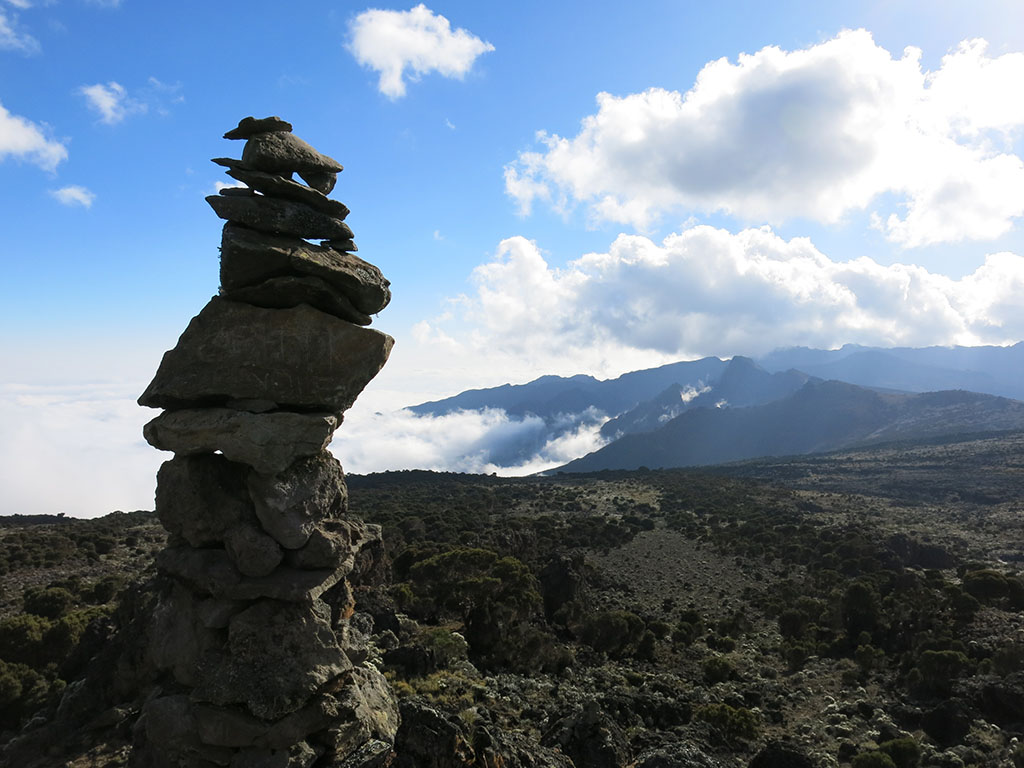 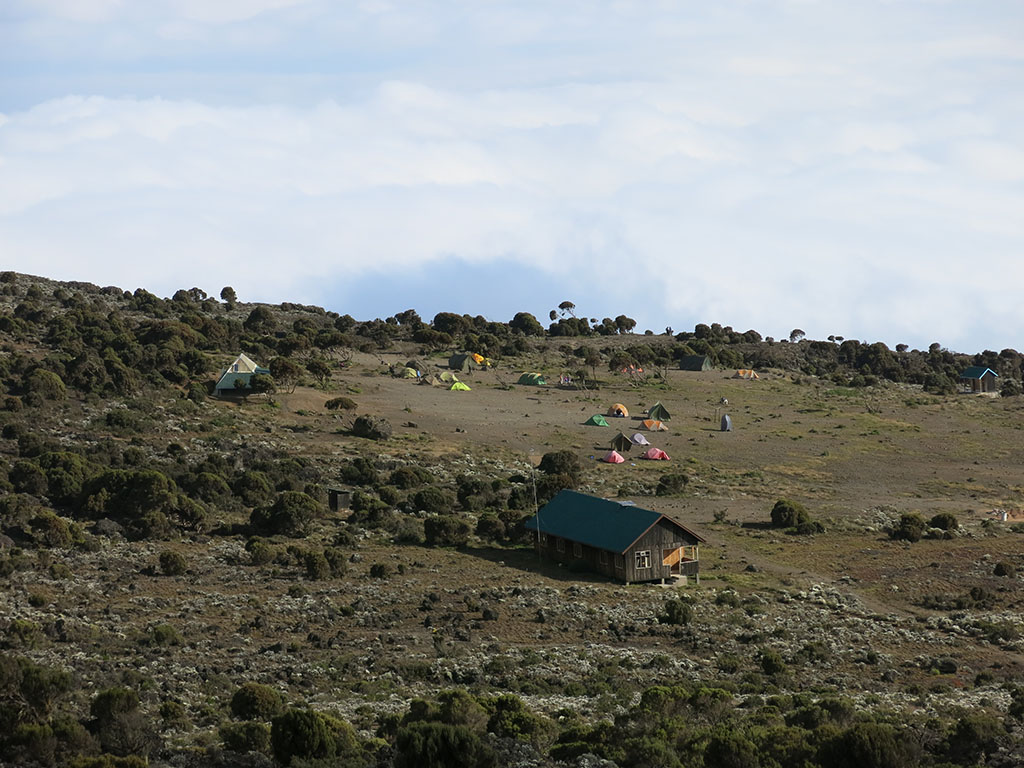 looking down on camp

After about an hour of gentle hiking we got back to camp for more popcorn and milo. Not a bad way to wind down for the day. I settled in with Mhina and Aris playing some “Last Card”, their variation of Uno. Seemed it was not quite as straight forward and there seemed to be new rules each hand! But I got the hang of it, winning a few hands before spending some time chatting more with the other hikers.

Rashili upped the ante with dinner again, with leak soup, chicken and chips and cucumber salad, and banana fritters filling our bellies. So good!

Even though it was a warm day, when the sun goes down at 3800m it get chilly quite quickly. It was straight to thermals and beanies to keep nice and snug, but even then, by 7:30pm it was very dark and misty and so it was time to relax in the tent. In what would become quite normal, by 8pm I was sound asleep.