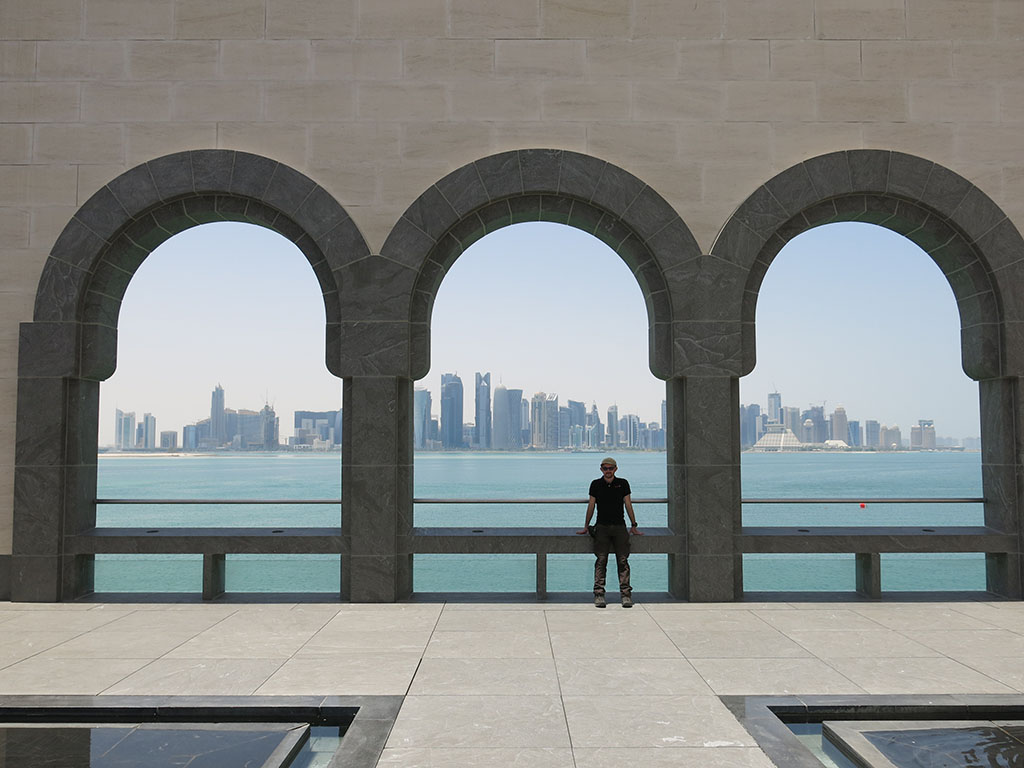 hanging out in doha

A quick bonus episode from my recent African adventure. While my flights were super easy and direct from Melbourne to Kilimanjaro, on the way home I had to spend a night in Doha due to flight connections. That was fortuitous in the end… it allowed another day to wind down before getting home, but most importantly it let me catch up with my mate Jez and his family! Yay!

Nic and I travelled together from Kili to Doha, a nice easy 7hr flight, arriving at about 11pm. Sadly, because of whatever weird transport reasons, we were not able to get our main luggage at Doha, but that was fine… we were just keen to get to our hotel and get some rest. So by midnight we were checked in at our hotel in downtown old Doha and getting some rest.

At 9am the next morning we were up and about and greeted at the hotel by Jez. It was great to see him… he had been away from Melbourne for a few years and was now as good as a local (well maybe not… he is heading home in the coming months) so not only was it awesome to see him, he was the ideal guide for the day. In just minutes we were parked at the nearby Souq (market) area in old town with his wife Laura as well for a morning of cruising the markets and seeing Doha.

Luckily for us it was a mild day in Doha… only about 39 degrees and quite dry heat rather than 45 and humid. Yay! I found the heat fine, although it seemed the locals prefer to keep out of it, as the souq was pretty quiet. Jez explained that no one really comes out until later in the afternoon when the souq would be all a buzz. 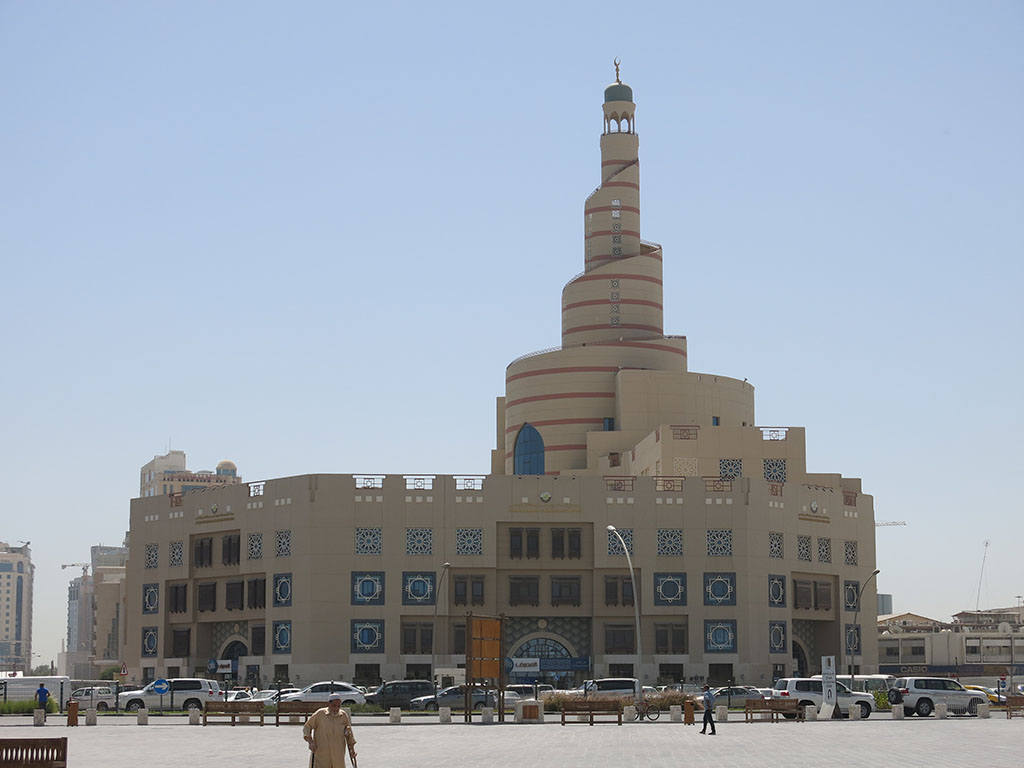 We wandered about old town, popping into a bunch of the market stalls. It was kind of like being in Turkey, the kinds of markets we saw, however there wasn’t a lot to jump out at me to pick up. Laura did take us to a great pearl store where I managed to pick up a little gift for Kate. We also went into a pretty bizarre taxidermy store that was much more crap taxidermy than quality. Strange.

We took a breather at one point having a sit down for some delicious hummus and ice cold lime juice drink. Mmmm… it hit the spot on this warm morning. 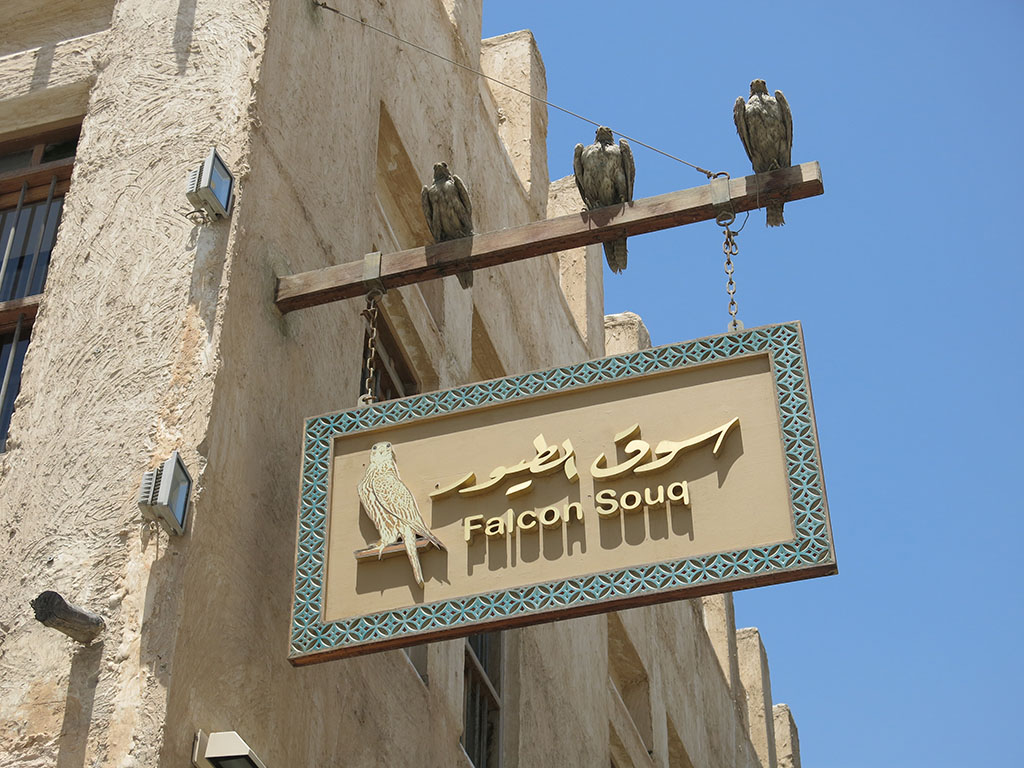 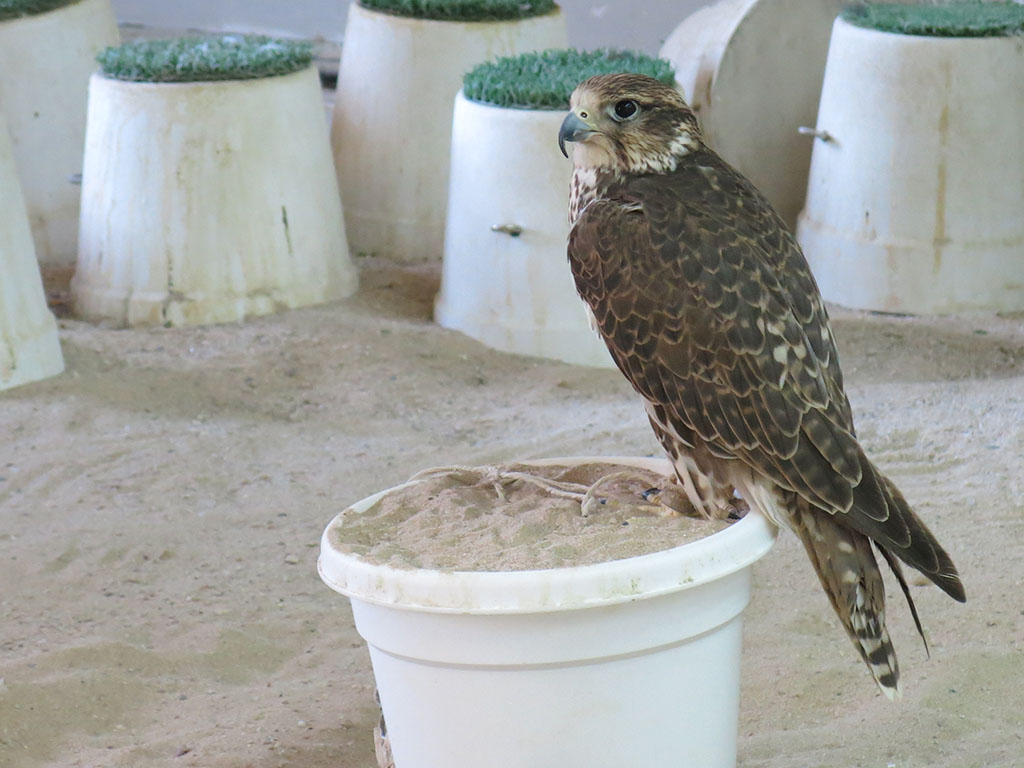 do you want to buy a falcon? 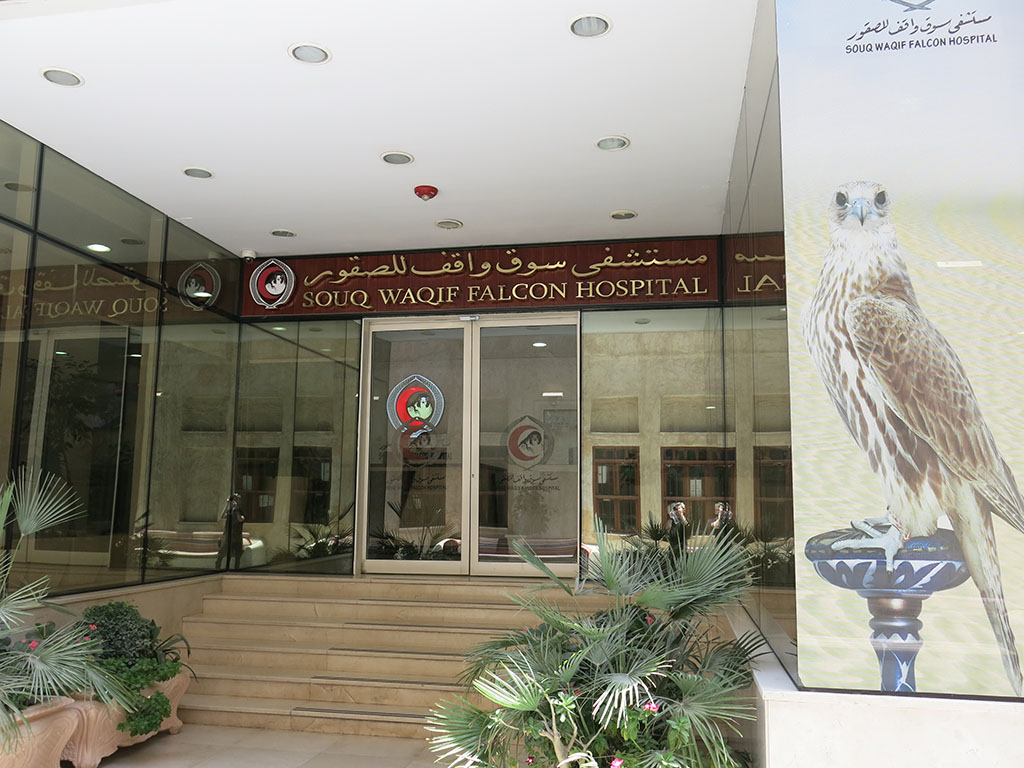 Next was into the Falcon Souq. Yep, if you are in the market for a falcon then you can get one here! Seems there is a thing for keeping and racing falcons in Doha. There was also a nearby Falcon Hospital which was fascinating! 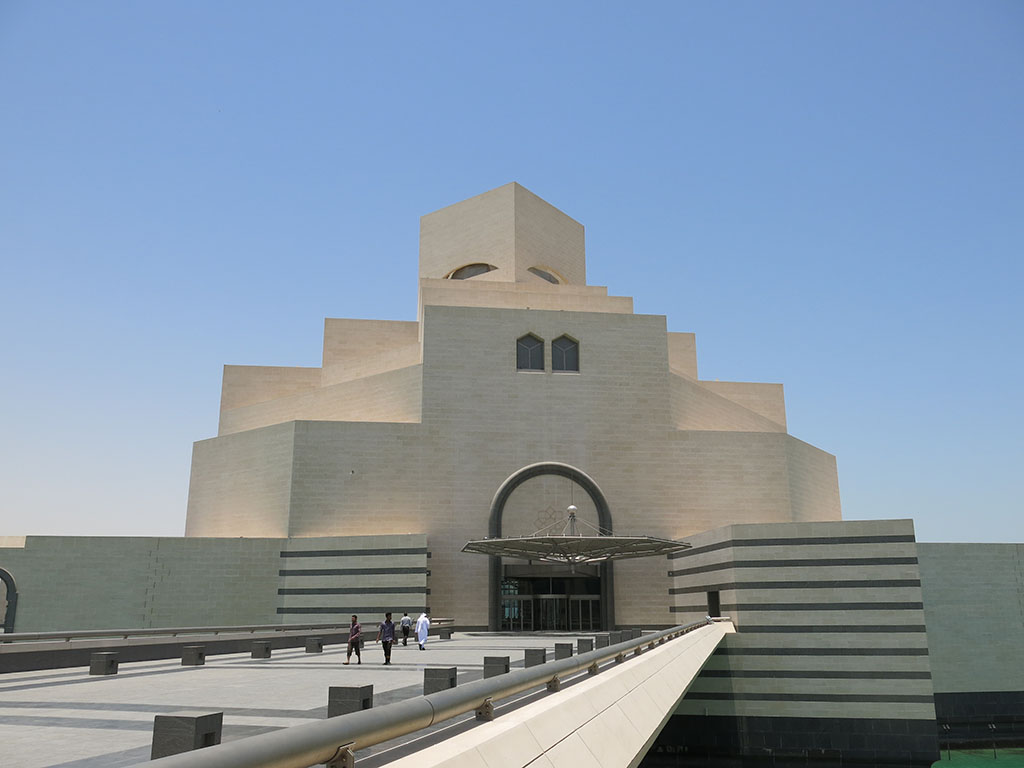 the museum welcomes us

By this time it was approaching late morning so Laura suggested popping into the nearby Museum of Islamic Art. It was housed in an amazing looking building. Apparently they didn’t realise it looked like a face until it was built! 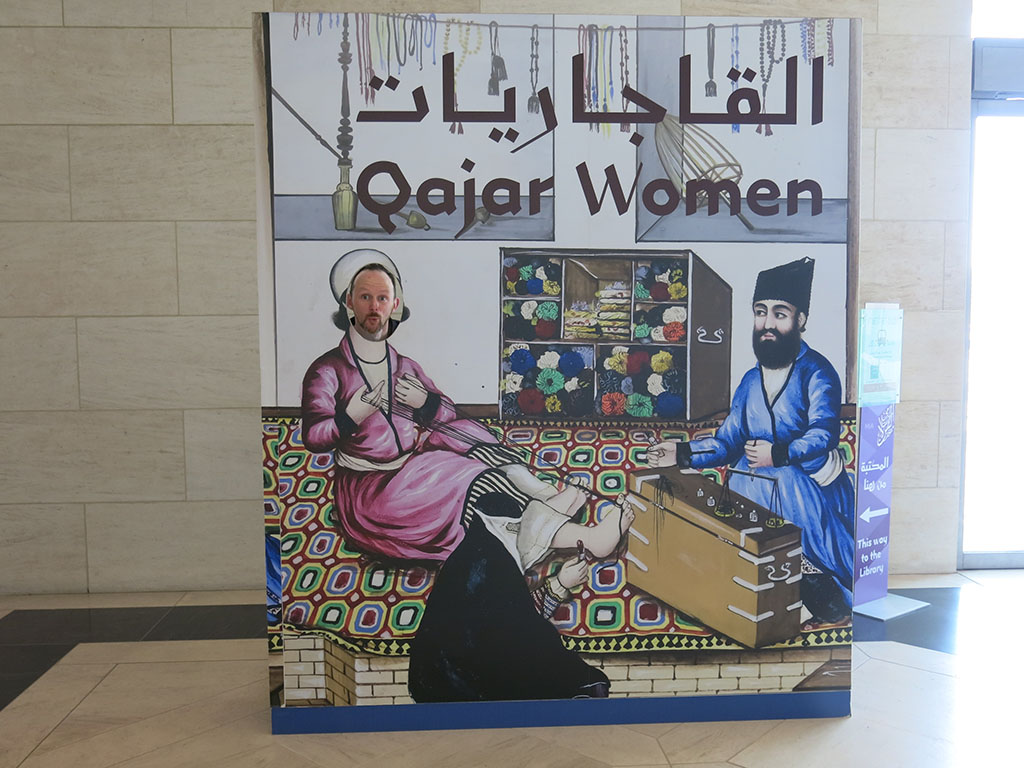 strange things in this museum 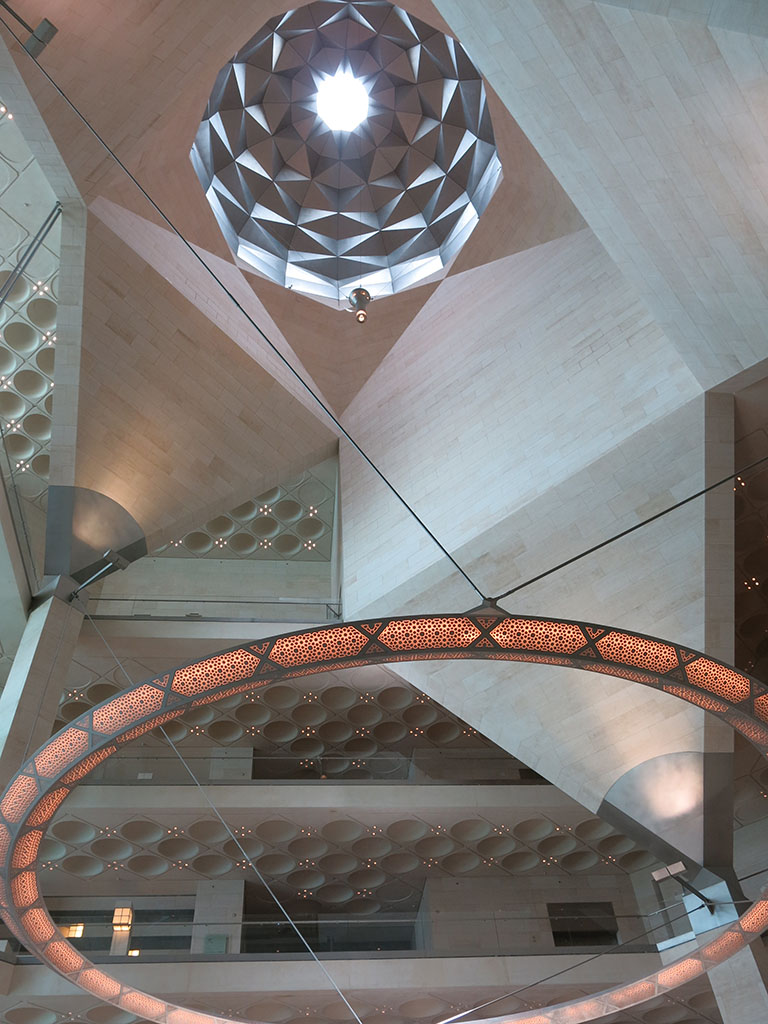 even the interior of the museum was amazing

This museum was incredible. It had an amazing collection of regional artefacts, bigger than any collection of this type I had seen before. Ceramics, religious artefacts, jewellery, ancient texts… you name it. It really was something else. We spent an hour or two wandering about and soaking it all up. 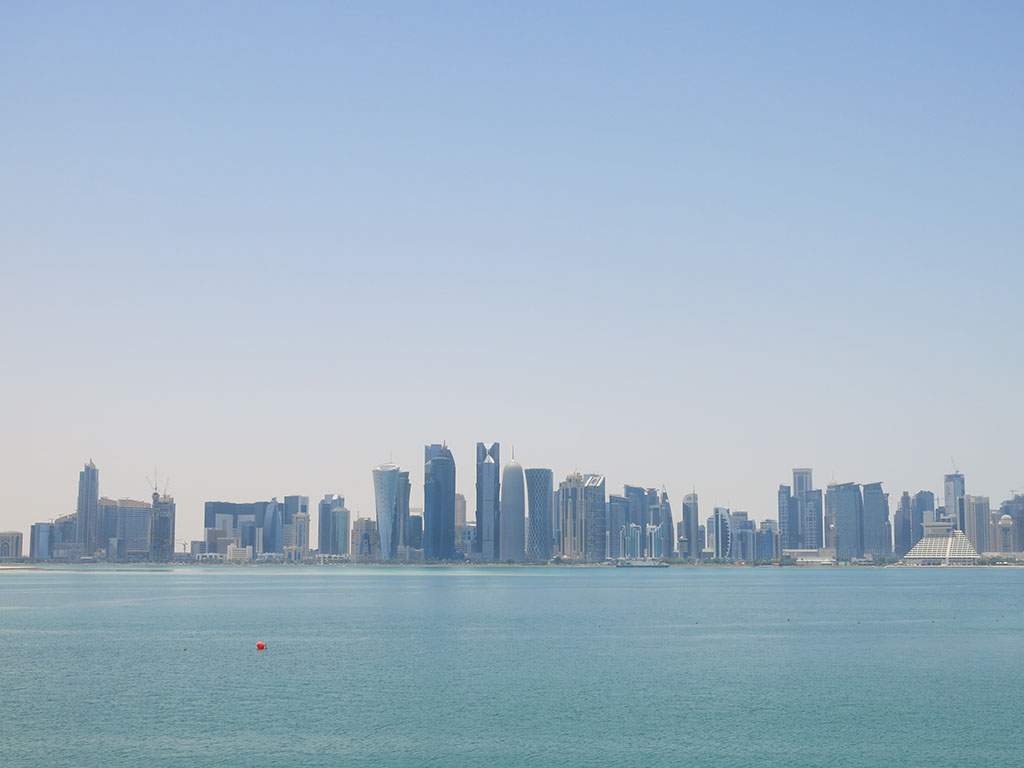 looking out to new town 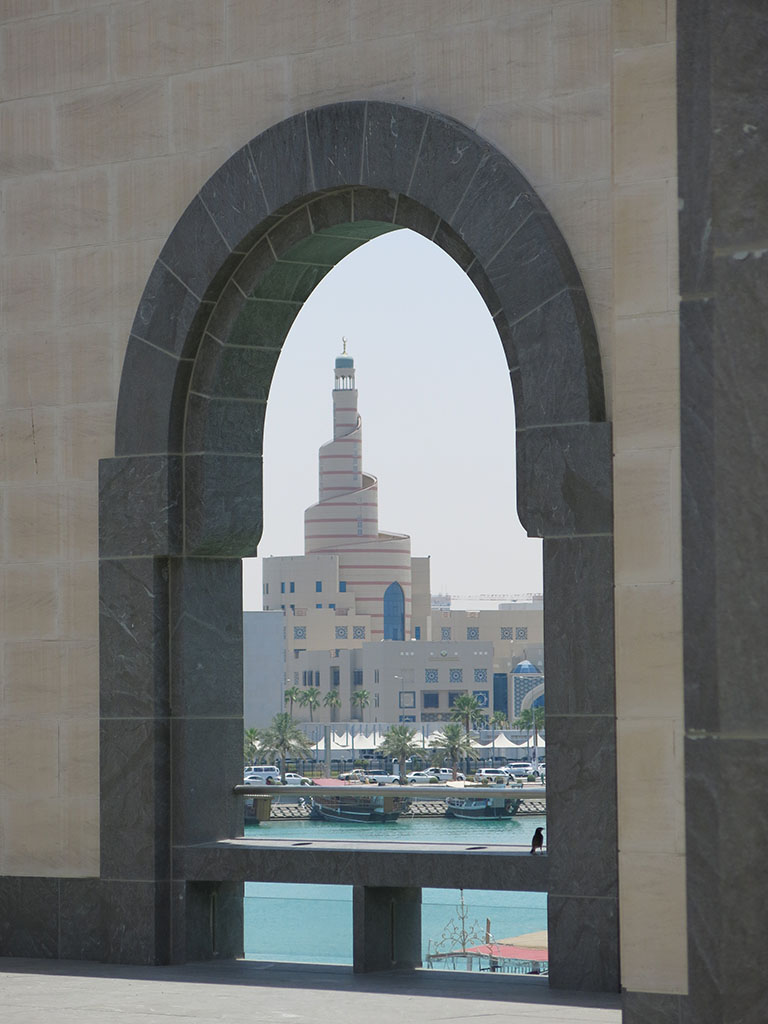 looking back on old town

The museum also gave us great views of the new parts of the city, across the water. That was the fascinating thing of Doha. It very much is a “new” city even though it has an old town and tradition. Everything was either shiny and new, or under construction. 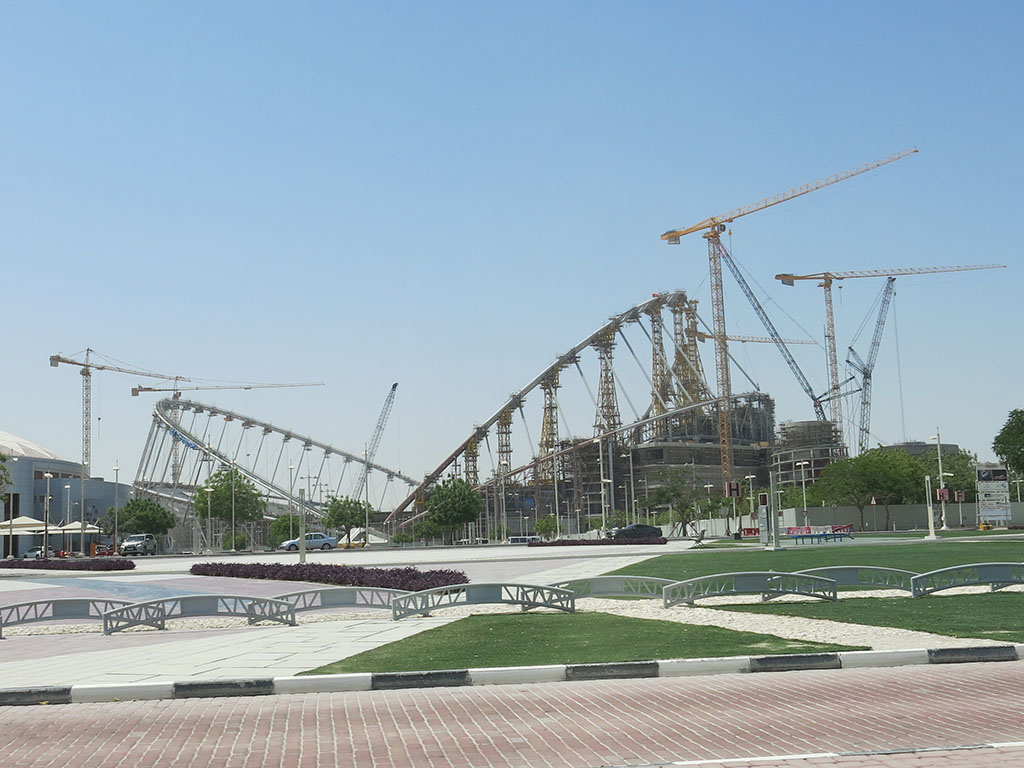 so you won the World Cup hosting hey?

This was really evident when Laura had to duck off to pick up the kids and Jez, Nic and I went driving around Doha. Everything outside of the old town and new town was just dusty and under construction. One big part is preparations for the 2022 World Cup. We not only saw stadiums being built, but also entire train networks being constructed. Crazy to think the city was awarded a World Cup with little to no infrastructure. Having said that though it could be a great opportunity to just soak up heaps and heaps of world cup games in one spot in shiny new stadiums. Hhhmmm. 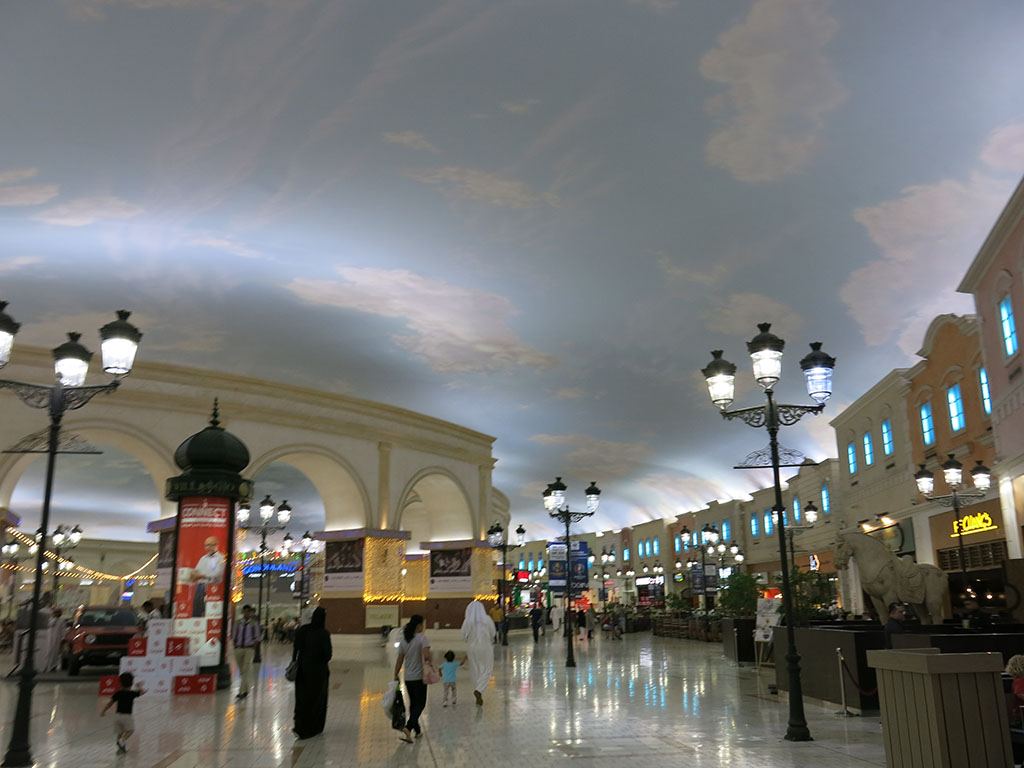 We headed back toward Jez and Laura’s place. On the way we popped in to a local shopping centre to grab a quick bite to eat. Seems everyone in Doha loves to shop. The shopping centre was just like one here, but with a little exception. The interior looked like it could be from Vegas, with its faux sky painted on the room, ice skating rink, and mini theme park. Yep there was a small roller coaster in there. Ha!

We didn’t bother shopping too much, rather had a bite and then headed back to Jez and Laura’s place to relax for a bit before heading to the airport. It was just nice to sit and chat and play with the kids for a bit before embarking on the trip home. It was great to see them all again, and great to know we would be seeing a lot more of them in the coming months.

Alas, it was time to head home. Jez took us out to the airport and we all said farewell. Nic and I then just had a little wait before jumping on the flight home. The trip home was uneventful… not quite full so we could stretch out a little and get some sleep. Before I knew it… some sleep and a couple movies later… and it was touchdown in cold Melbourne. 9 degrees! Bbbbrrrrrrr.

And that’s it! After just under 2 weeks I was back home. In that short time I had scaled the heights of Africa and hung out with hundreds of safari animals. Crazy huh?