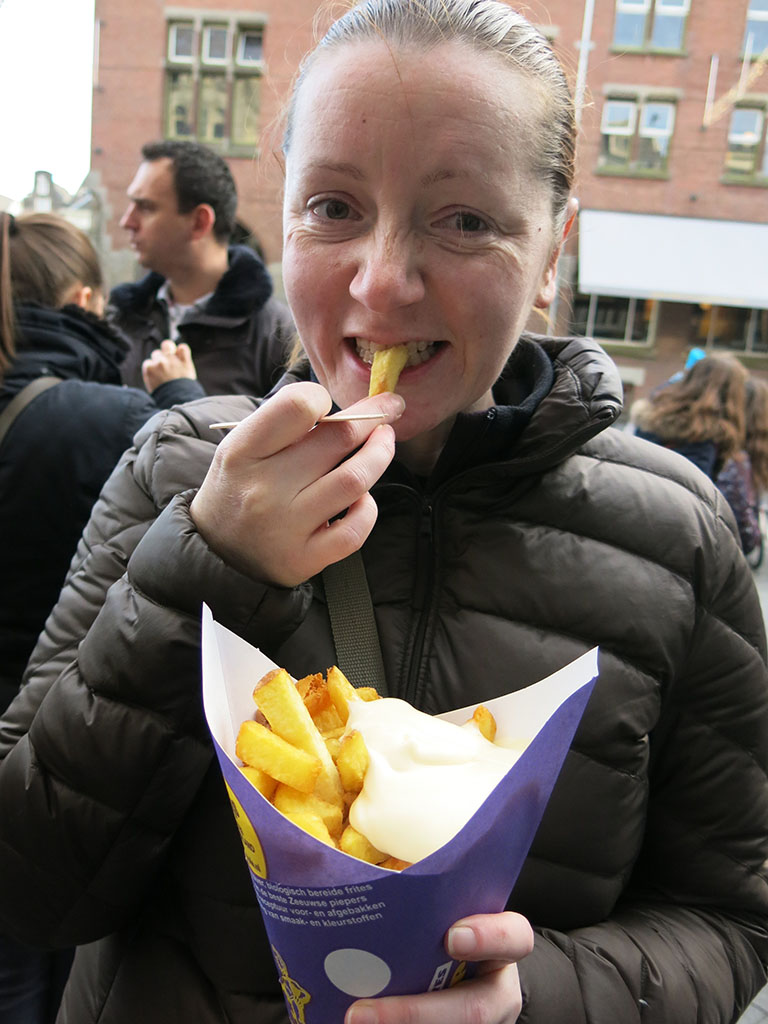 Our last day in Amsterdam and on holidays 🙁

This will be a pretty short post, as for our last day in Amsterdam and of our holiday overall, we really just wanted to keep it low key. We had nothing we HAD to do, and were content to just wander the streets for a bit, do some final shopping, and soak up Amsterdam. Who knows if we will ever be back?

After a sleep in we wandered off, with a quick stop to the Rijksmuseum, where I finally picked up a museum book that I had been meaning to buy. We also visited a nearby gallery/store called Famous that I had found out about online. I found them through my searching for a Takashi Murakami print I liked, so I decided to pop in and say hi.

The guy who helped us was really nice and and happy to pull out the Murakami print I liked to have a look. In the flesh it was really very cool and very tempting. Should I buy?! Hhhmmm! Kate was on board, but in the end I passed. Sadly our Aussie dollar was not doing me many favours, so I decided to leave it for the time being given it was a kinda pricey buy. If I had regrets in the future they said they were happy to ship so I know I could get it if I wanted.

getting the couch in would be a nightmare

Otherwise we just caught the tram up to the top of the city and meandered back, in some respects like what we had done yesterday. We stopped by one sight near the station, the famous narrow house.

Only a metre wide, this is the narrowest house (at least frontage) in Amsterdam. The reason harkens back to when house tax was based on the frontage, so one enterprising soul decided all they needed was a door. Clearly there was some more going on behind the scenes, but form the front it was pretty funny.

As we wandered down through all the shops, we were surrounded by people. You know how I said it was busy yesterday? Nothing on today. The streets were jam packed. Clearly the New Years influx was in full force. The main difference was not so much the number of people, rather the types of people now about. Without sounding snobbish at all, it certainly seemed that most people were in their 20s and here in Amsterdam for a good time. The ration of dudes was pretty high too. Kate and I both agreed that getting out of Amsterdam before New Years was definitely the right decision as it didn’t seem like it would really be our scene.

Over the next few hours we wandered and finally due to my hunger I opted for probably the most traditional food I could get here in Amsterdam. Chips in a cone! The ubiquitous frites and mayonnaise. 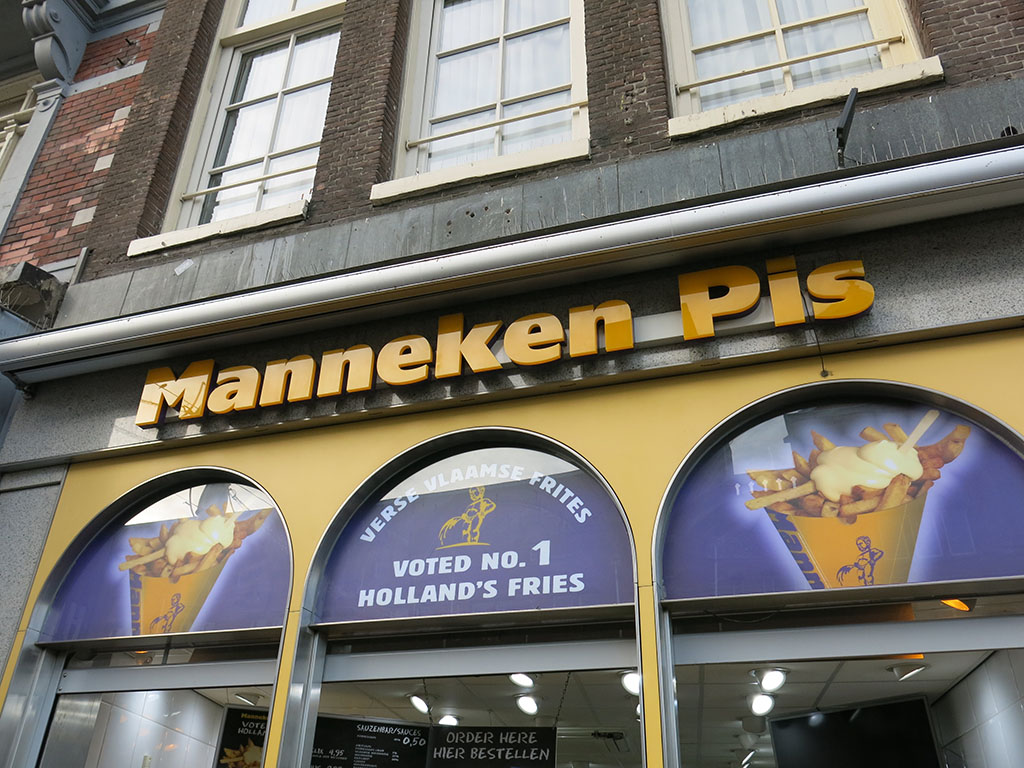 We stopped by what is apparently the best ships in town. The queue was a give away (as was their sign proclaiming as such), but when we tasted them… man they were some tasty frites! And the mayonnaise was soooo good. Mmmmmm.

We also took the opportunity to pop into some cheese stores along the way. While we wouldn’t be able to take cheese home thanks to our Aussie customs rules, that wouldn’t stop us from sampling. Gouda is king here and to be honest it is not my favourite. Not enough taste in there for me. But we did find some aged goudas as well as some other local cheeses that were really tasty. Kate fell in love with one that caused her to lament that we could not take them home. We would just have to get on the hunt back at home. 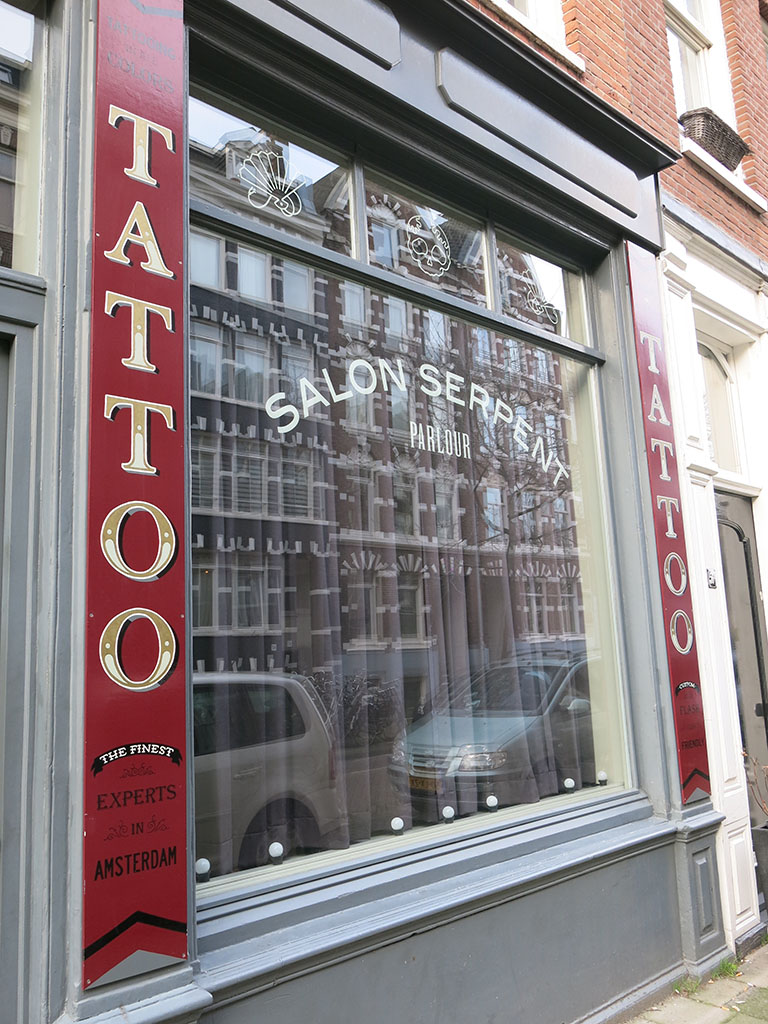 sadly no one was home

One final detour near the hotel was on the cards. One of my only disappointments with the trip to Amsterdam was that I entertained the idea of whether a tattoo would be possible. A tattoo?! Maybe. Why I was thinking about it was that Amsterdam is the home of the amazing tattoo artist Angelique Houtkamp, who’s gallery shows I had visited at Outre a number of times back at home. I love her work and the chance to get something my Angelique herself sounded like an amazing opportunity.

Sadly her salon was closed for our time in Amsterdam (which I knew beforehand) so it wasn’t to be. I decided to wander by and see the studio, feeling a little sad I didn’t have the chance to visit.

And with that, the week in Amsterdam pretty much comes to an end. We wandered to get some dinner nearby and it seemed EVERY place to east was full and had a long wait. Our perceptions that the streets were way busier were spot on. So an easy dinner was in order and then all we had left to do was pack and set the alarms for the morning.