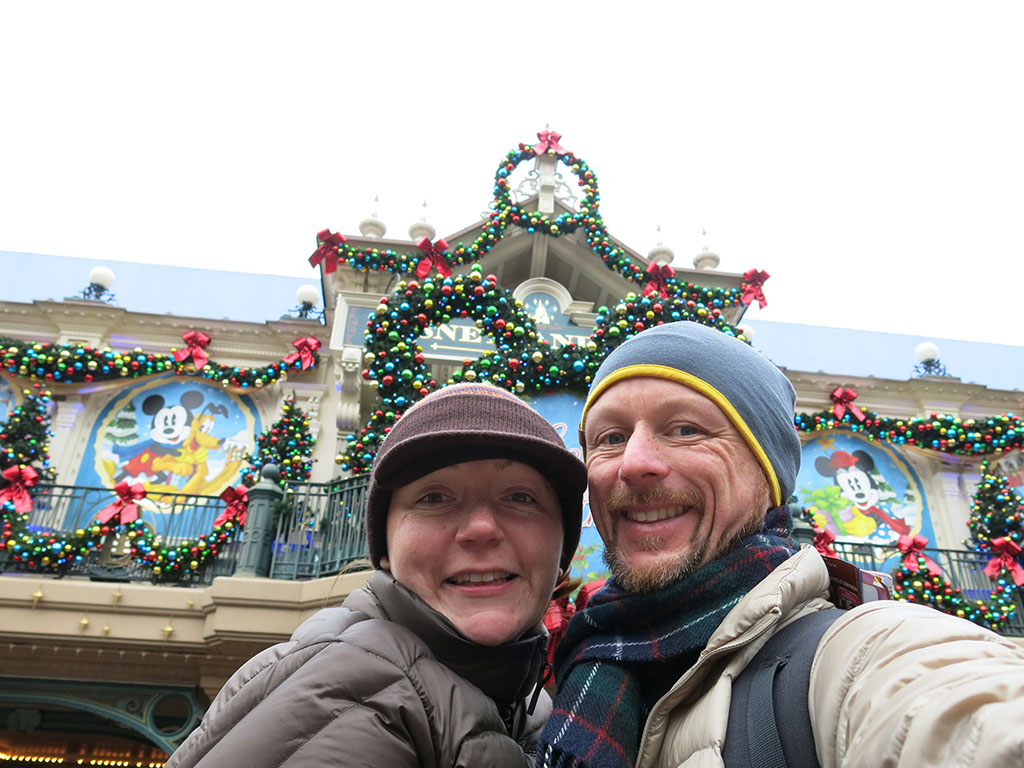 another christmas at disneyland

So I guess between Kate and I, Paris has two of the happiest places on earth. I have already gone on about the Louvre, and maybe you can  guess Kate’s. Yep, we were off to Disneyland.

Paris Disneyland is not necessarily up there with the best of the parks, but you know… it’s Christmas time, there are rides to be ridden, and who can be in museums and galleries for a week without a break? Not us! So we jumped on the train and headed out there. 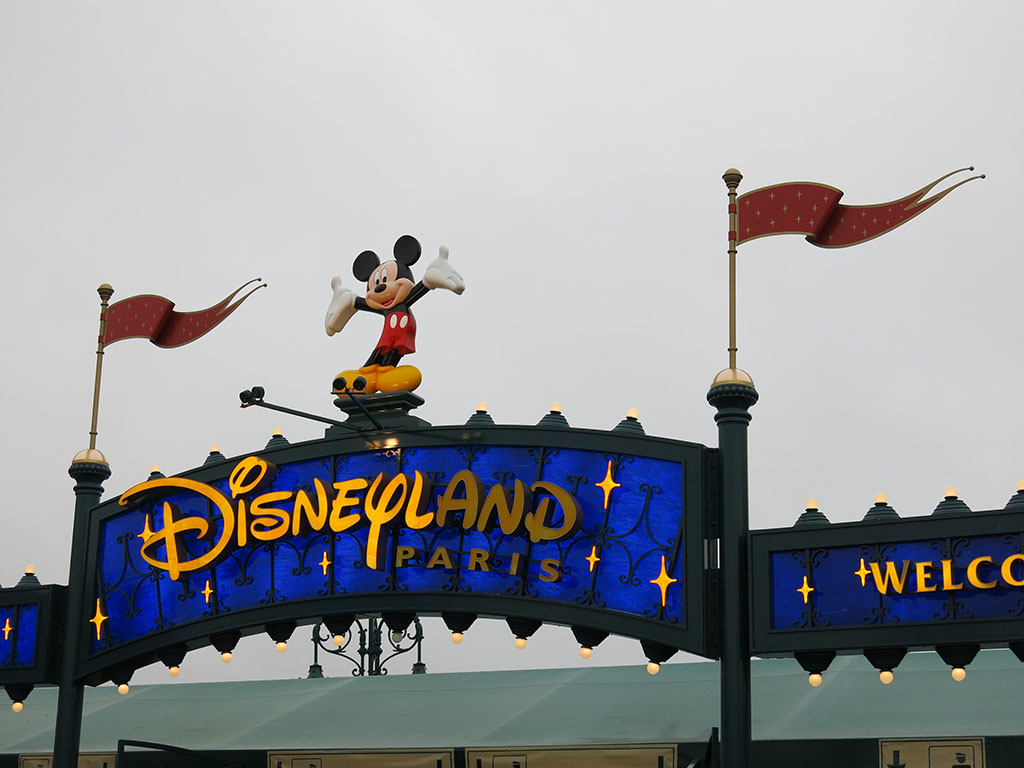 back to see the mouse

There are two parks at the Disney site… Disneyland and Disney Studios. Kate had not been to the studio park before, while I had 10 years ago when to be honest it was really very mediocre. It was not much but studio tour train ride from what I remembered. I certainly didn’t spend any real time in the park. But it had been bolstered with a bunch of new rides, so we opted for a 2 park pass and started our day in the studio side. 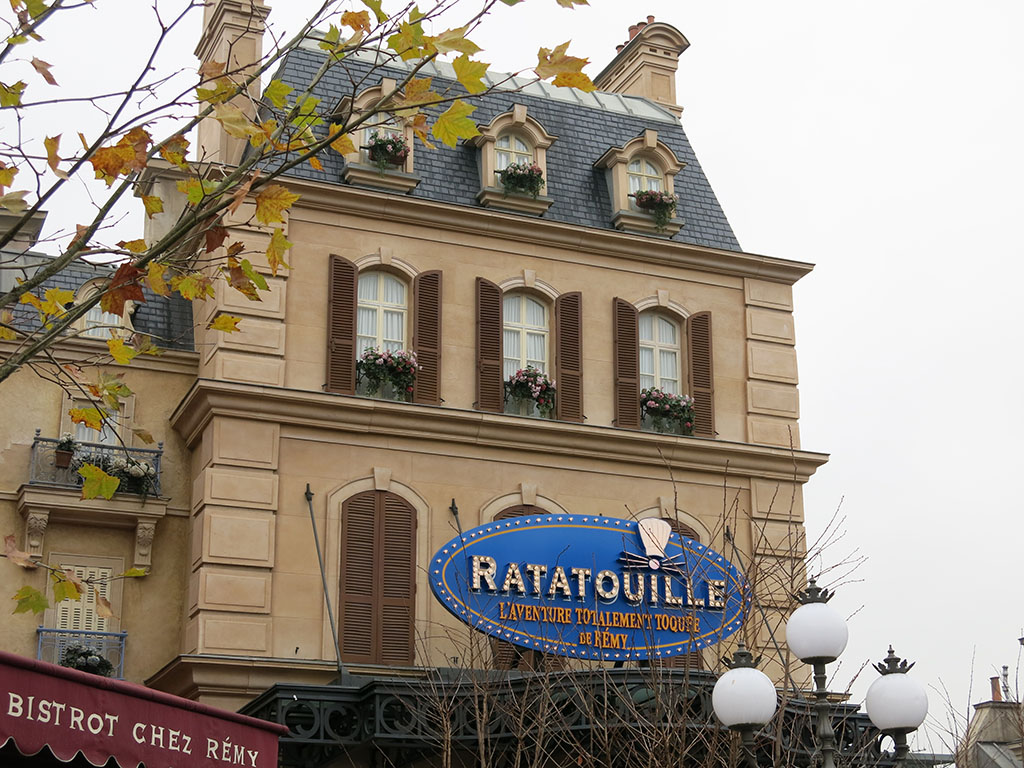 While there was a bunch more added in the past decade, the Disney Studio park is still not huge. The main reason for heading in was for the Ratatouille ride. Yes! One of my favourite Pixar films had a dedicated ride! To be expected I guess given what country we were in. So we headed there to find an hour long wait. Boo. We got fast passes to go back in a few hours, but decided we couldn’t wait that long and headed into the single rider queue. We would be split up, but a 5 minute wait compared to 60? We would take that and ride together later!

So in less than 5 we were on the ride. Man, this one is fun! You jump in a small carriage and take the role of a rat running around in the kitchen. The ride is a mix of scuttling through huge sets and props, combined with huge 3D video projections to make you feel like you are zooming about as well. The mix worked really well and gave a great sense of frenetic movement and rushing about. The odd spray from a popping champagne cork was fun too. 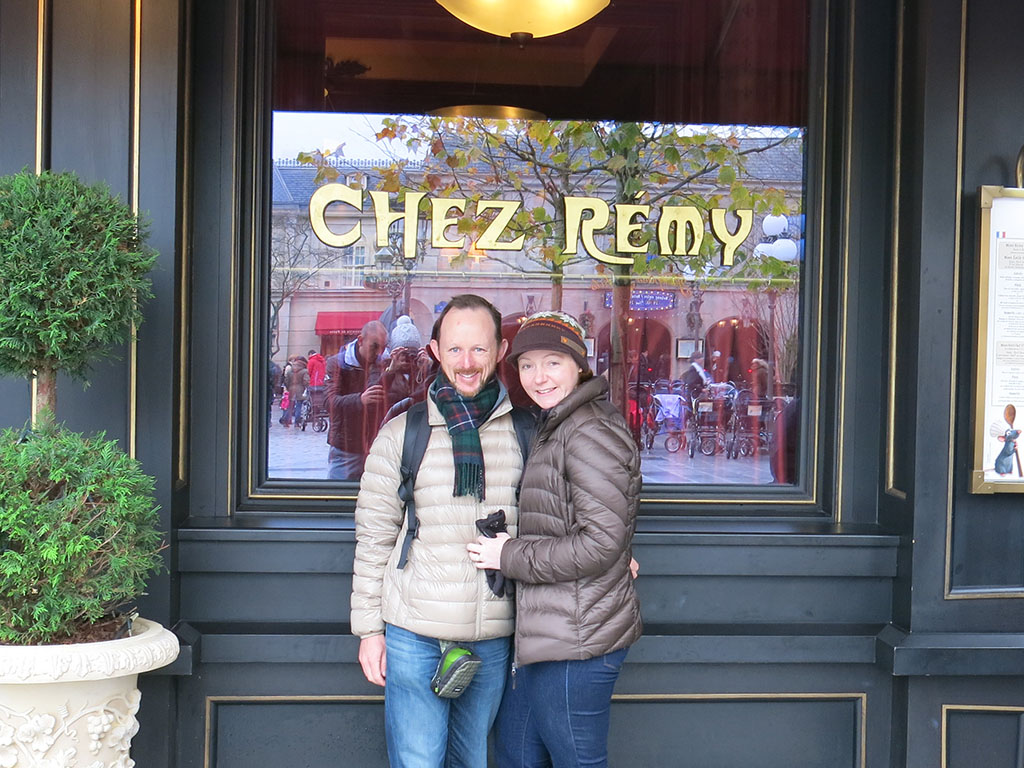 this little mouse sure has built up an empire

We both loved it and were keen to jump on again later. In the area they were obviously capitalising on the Parisian nature of the movie. Remy even had his own up market restaurant. 40 euro for a meal at a Disney restaurant? As cool as it might be, no thanks (it did look cool inside though!).

To be honest there were not many other rides of interest in this side of the park. There were some Toy Story themed ones more for kids that we rode in California a couple of years ago, but we gave them a pass. We jumped on the studio tour type train ride that seemed pretty long in the tooth and not really showing anything new.

I was excited to jump on the Twilight Zone themed Tower of Terror ride (as always) as it is one of my favourite Disney park rides. Kate happily get a single fast pass for that and jump on myself. I have probably written about this one before, but it is essentially a haunted elevator with a mind of its own, shooting up and down. This is so much fun as much for the reactions of everyone in there with you. 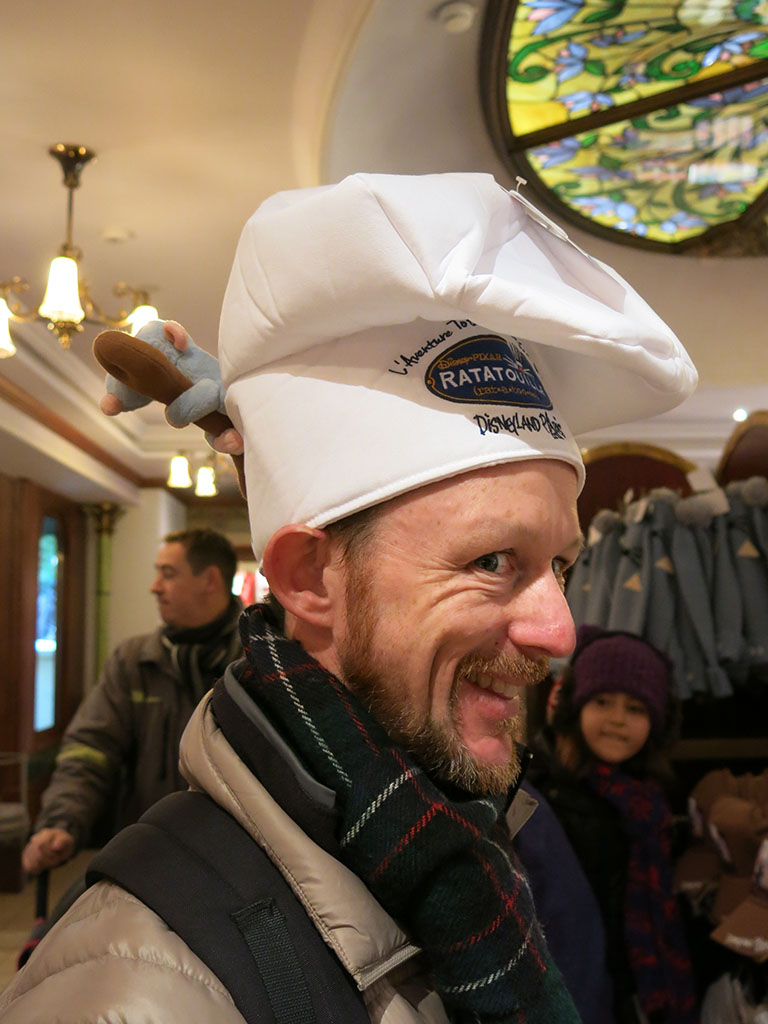 anyone can cook apparently 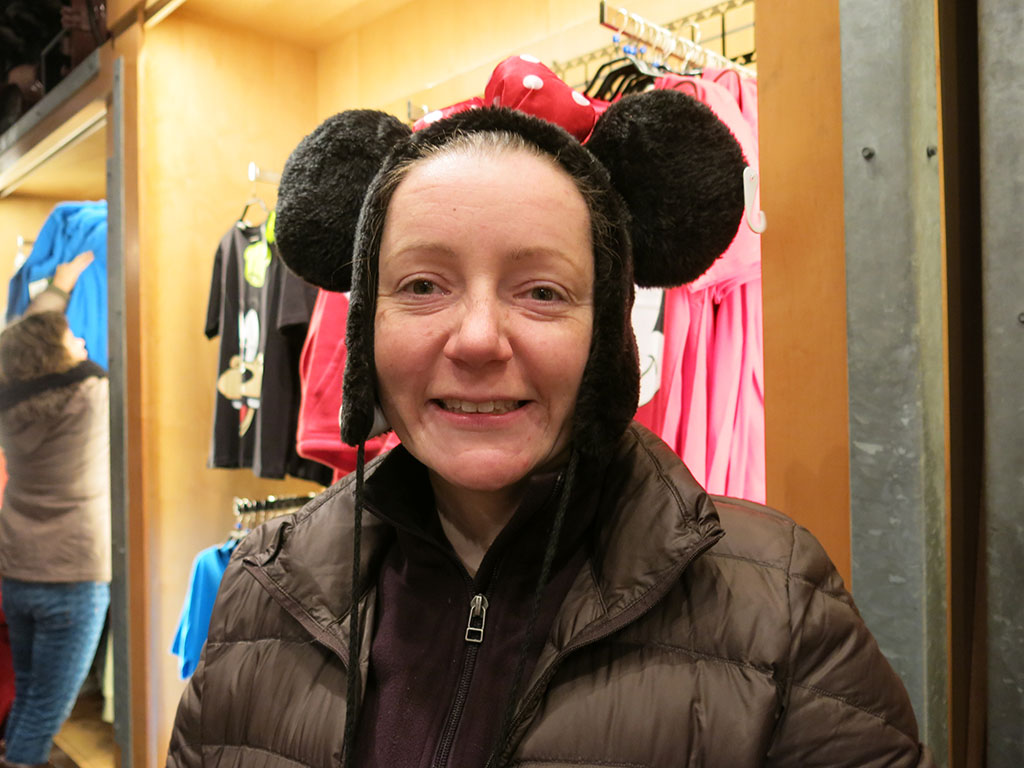 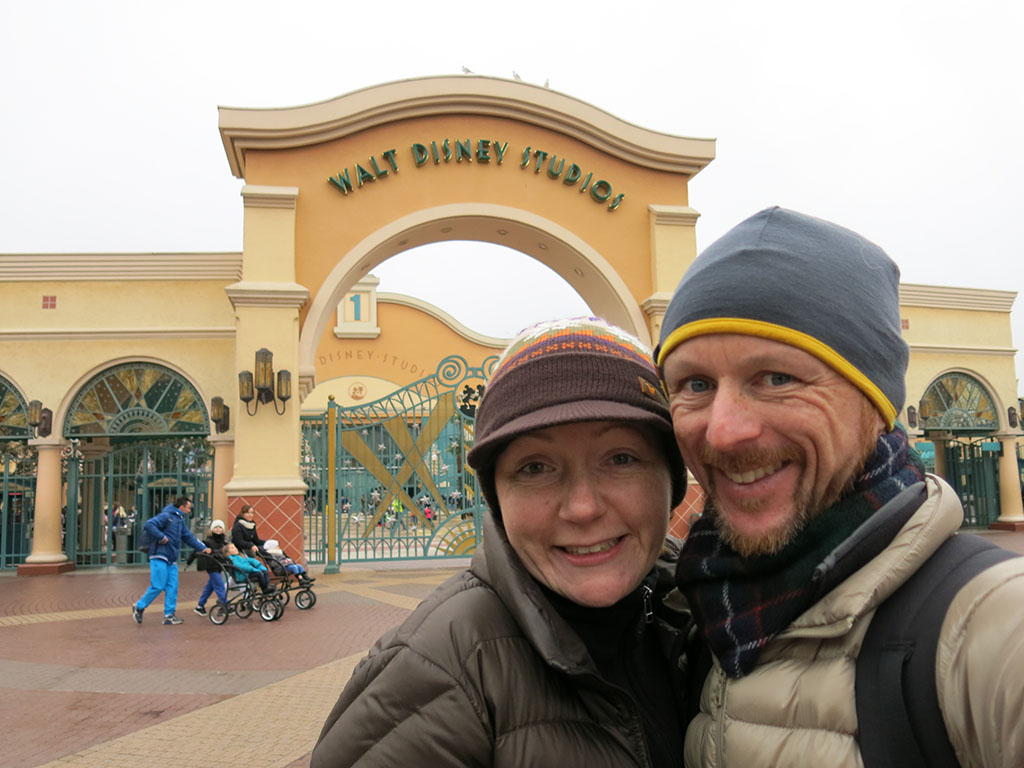 Otherwise we didn’t really do too much else on the studio side. There weren’t any characters wandering, so we popped into the shops for some fun pics before jumping on the Ratatouille ride again and calling the park done.

Now it was time for Disneyland proper! 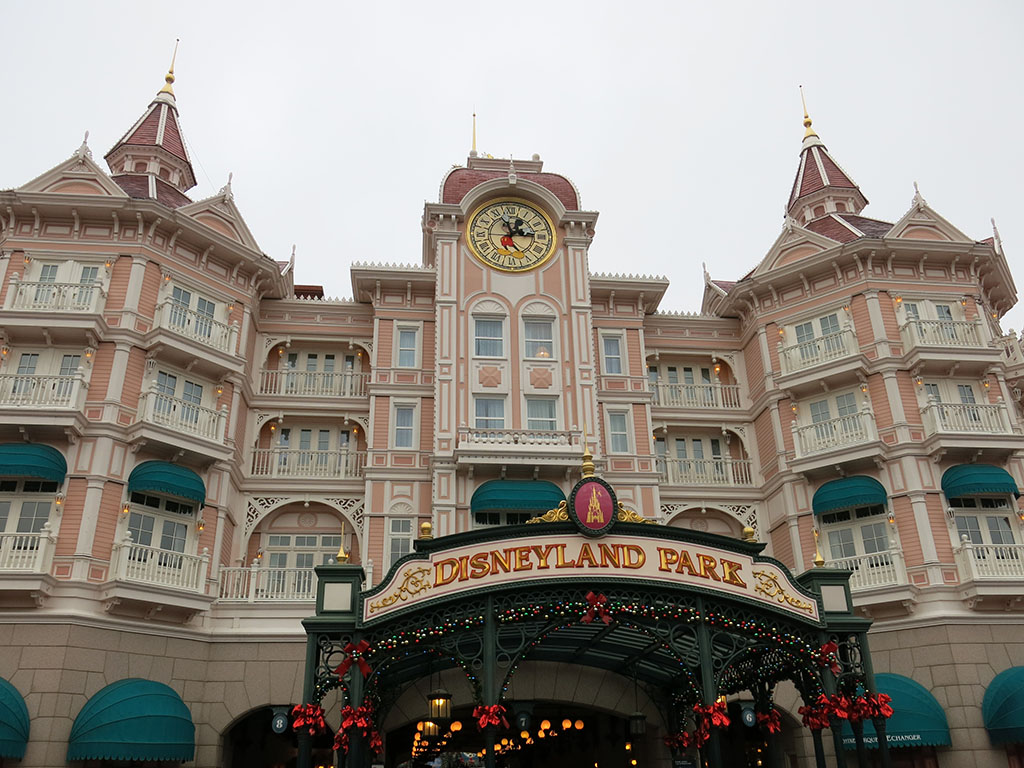 into the (more) real disneyland

In many respects we had the luxury of being able to chill a bit. We had both been to this park before and having been in California only a couple of years ago, much was still fresh. So we targeted our favourite rides rather than try and fit everything in. 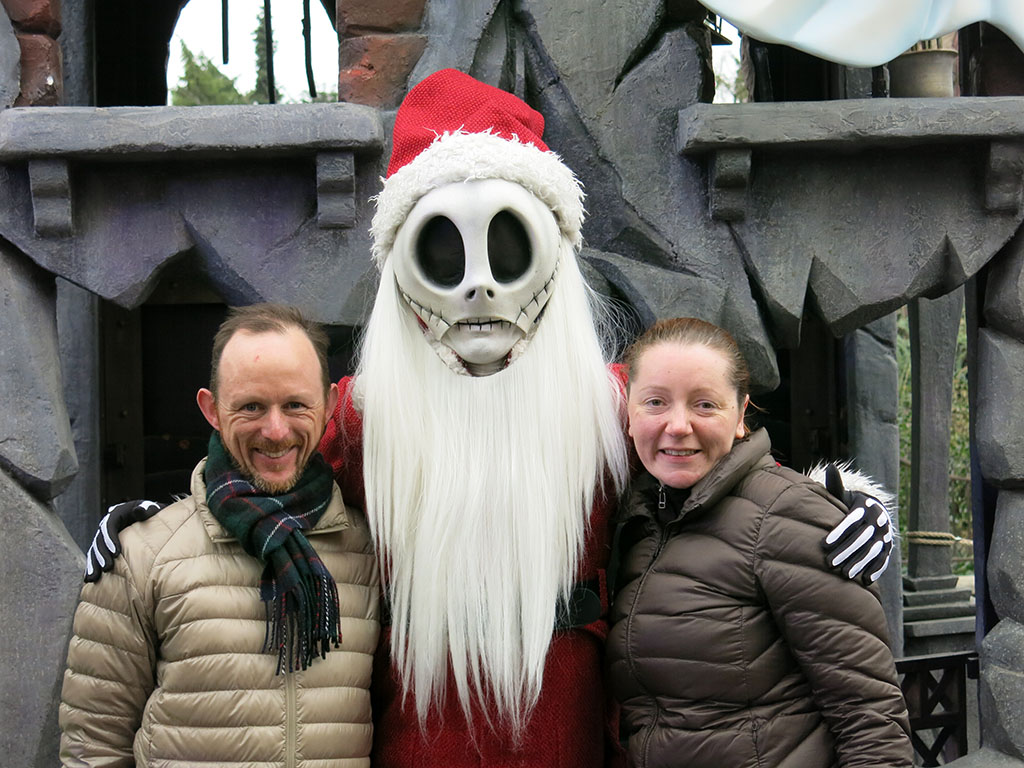 First off was Haunted Mansion, or rather Phantom Manor as it is called here. Christmas Jack Skellington was hanging about out the front so we couldn’t resist saying hi and getting a picture. Our only character picture of the day! He seemed in good spirits in that big head of his. 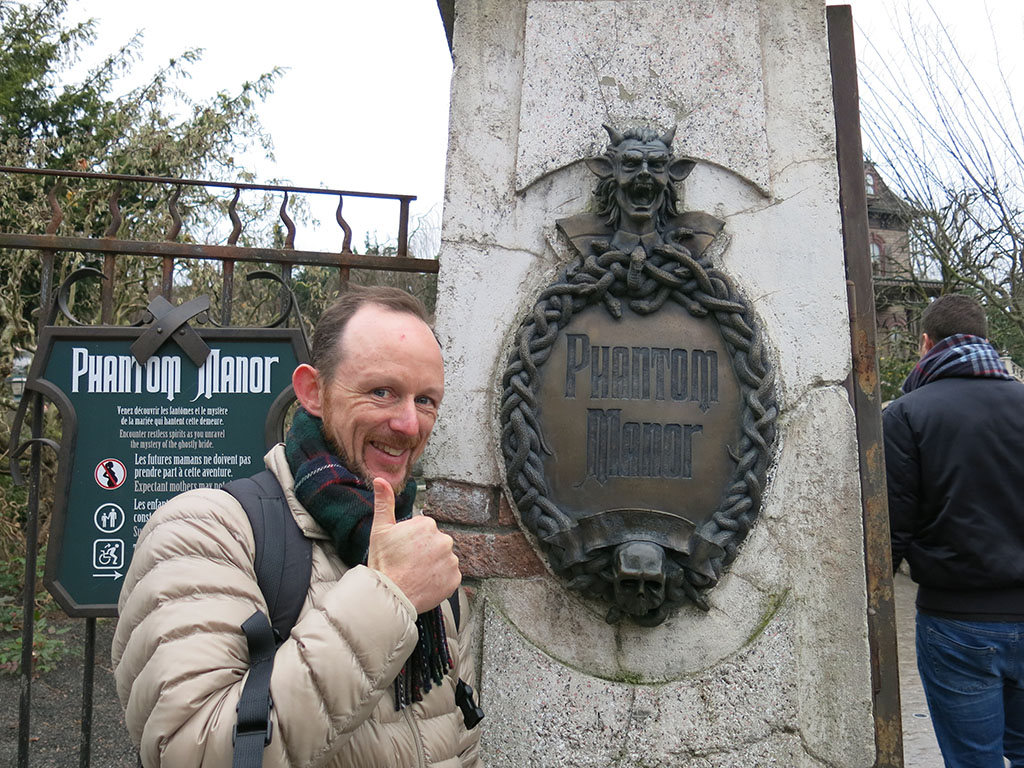 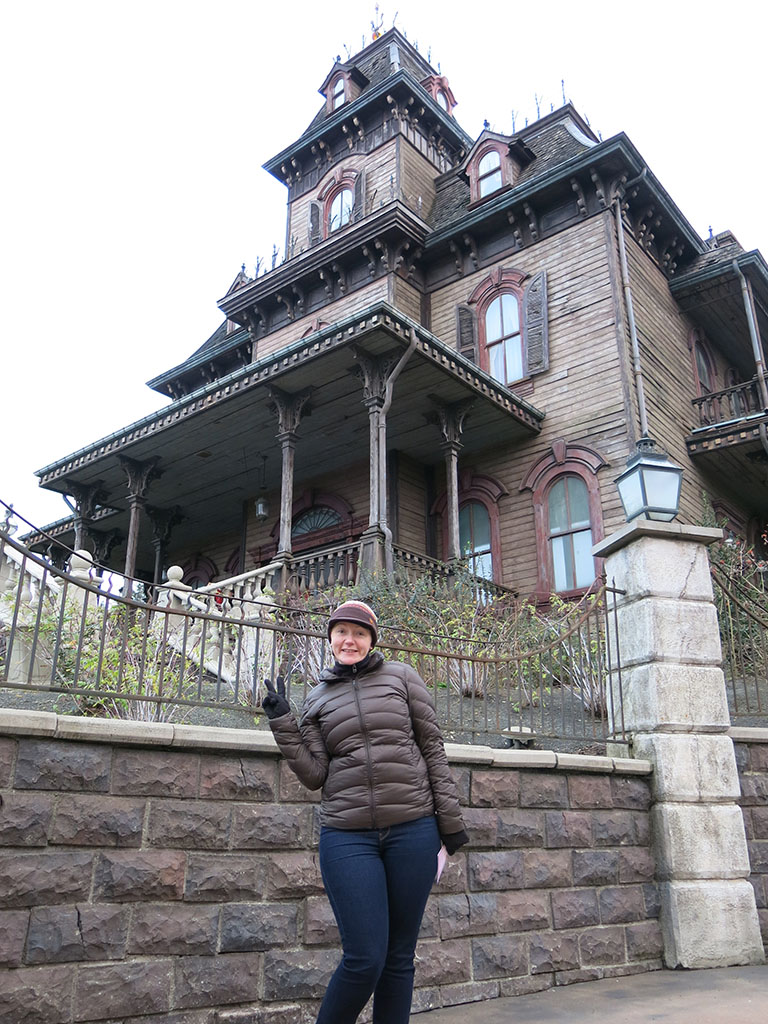 The queue for Haunted Mansion was fast moving so in we went. Both of us dig this ride for whatever reason, and as we were moving about inside it dawned on us how different it is. There were many parts where we were looking at each other saying “I don’t remember this?!”. Made for a different experience, but not quite the one we were expecting! Still fun regardless. 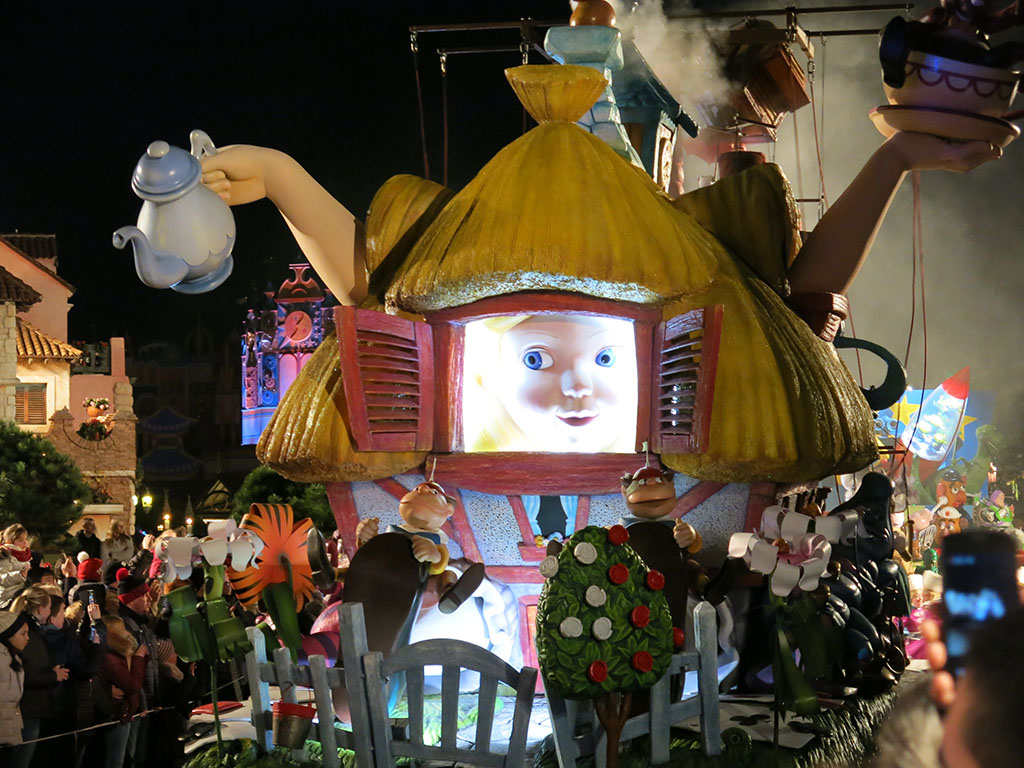 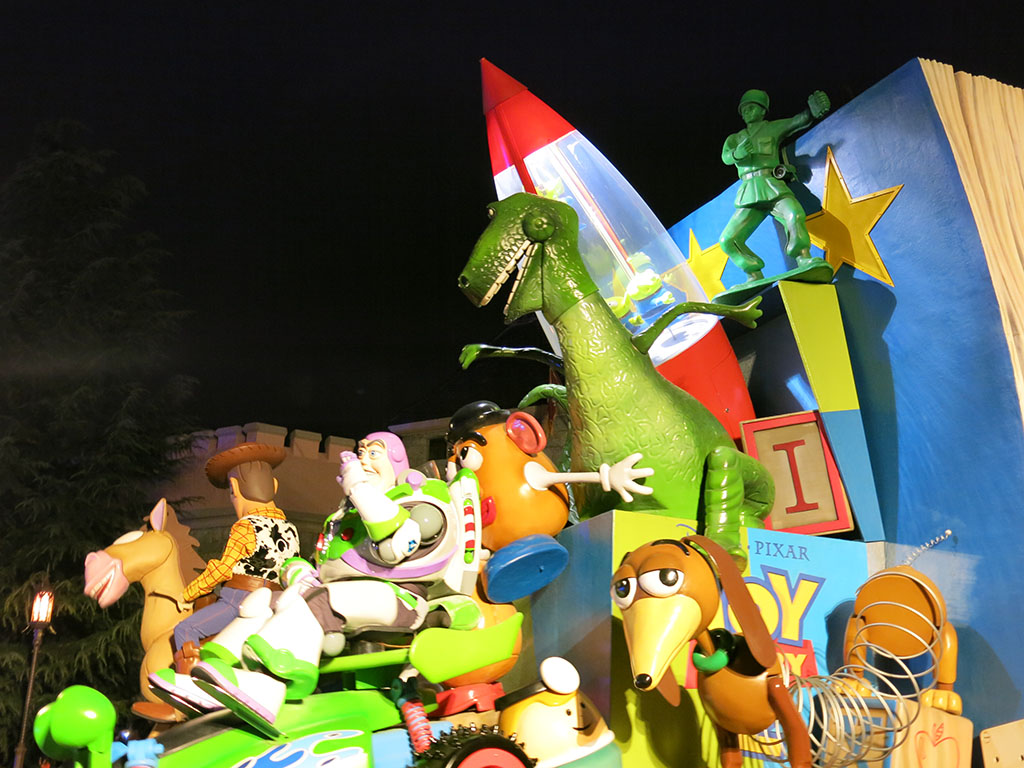 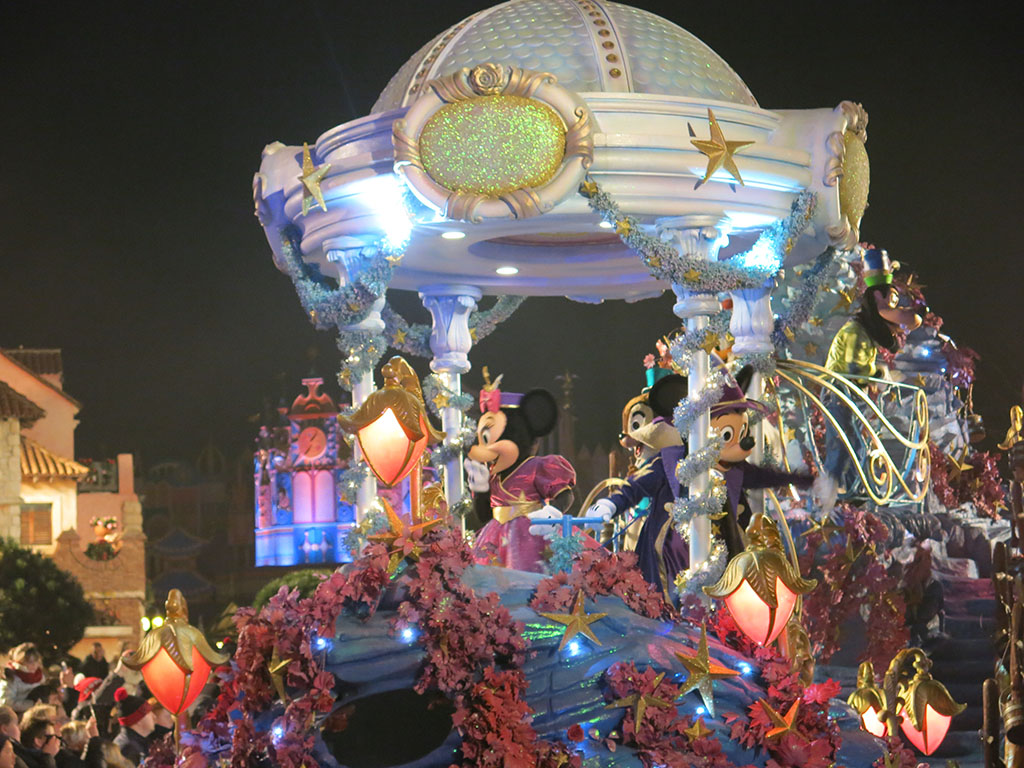 the mice were there too

Night descends fast here in Paris, and in no time at all it was time for the night time parade (5pm!). It was your typical Disneyland parade… all the characters ad floats wandering past. It is times like these Kate is always in her element, loving it all! And you know… the little kid inside you can’t help but get right into it. 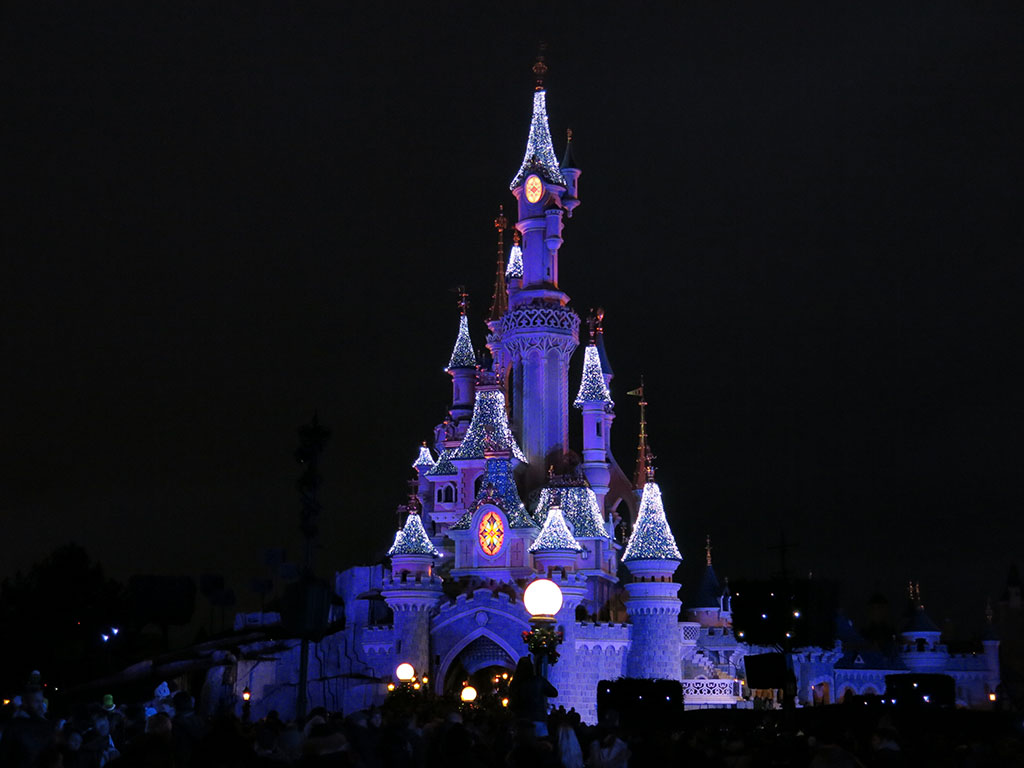 The park is very different at night and it seemed quite dark to be honest, not the bright place we typically think of it. But that was OK… it meant the crowds started to thin out and let us get on to some of the other rides pretty quick. After the parade we hightailed it to Pirates of the Caribbean and were in in no time at all. Unlike California, there was a distinct lack of Captain Jack Sparrow (well the Johnny Depp version) around which was kind of odd.

We also jumped on Pinocchio as we went past too to continue with the old school ride theme. 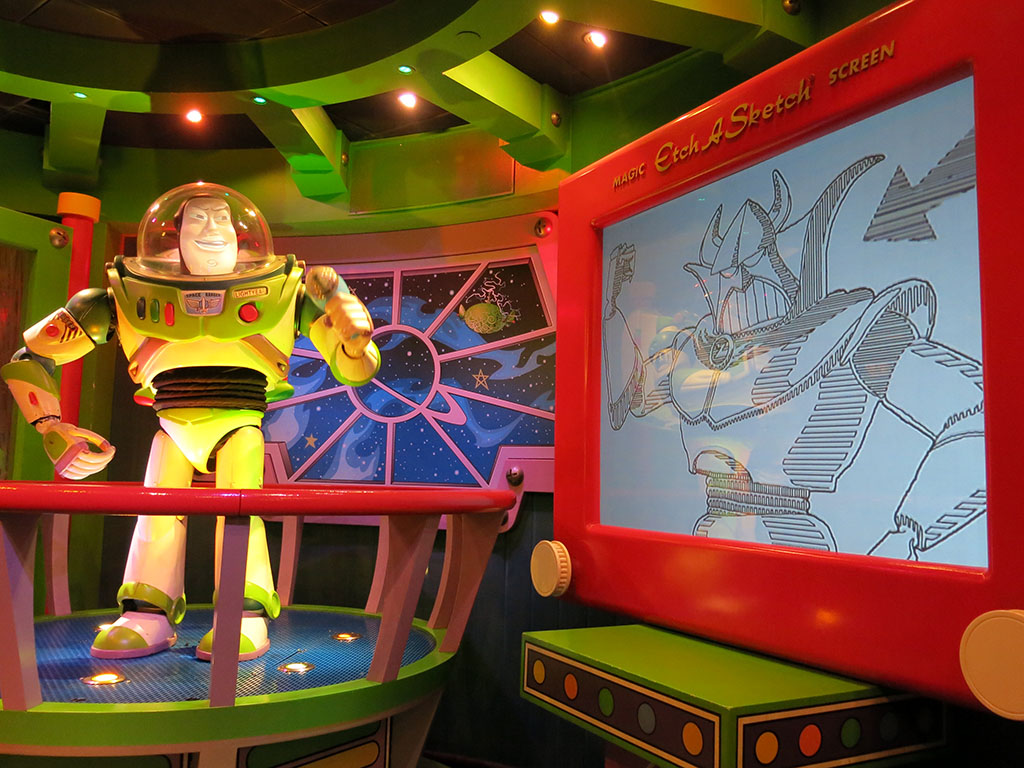 watch out for zurg!

But we needed to make sure we got a session in on the Buzz Lightyear Space Blasters ride, one of our favourites. I was current champ on this one, so we were looking forward to getting in the buggy and zooming through, taking shots at evil Zurg. This time I got ahead again with a score of over 300,000. My aim was true today. 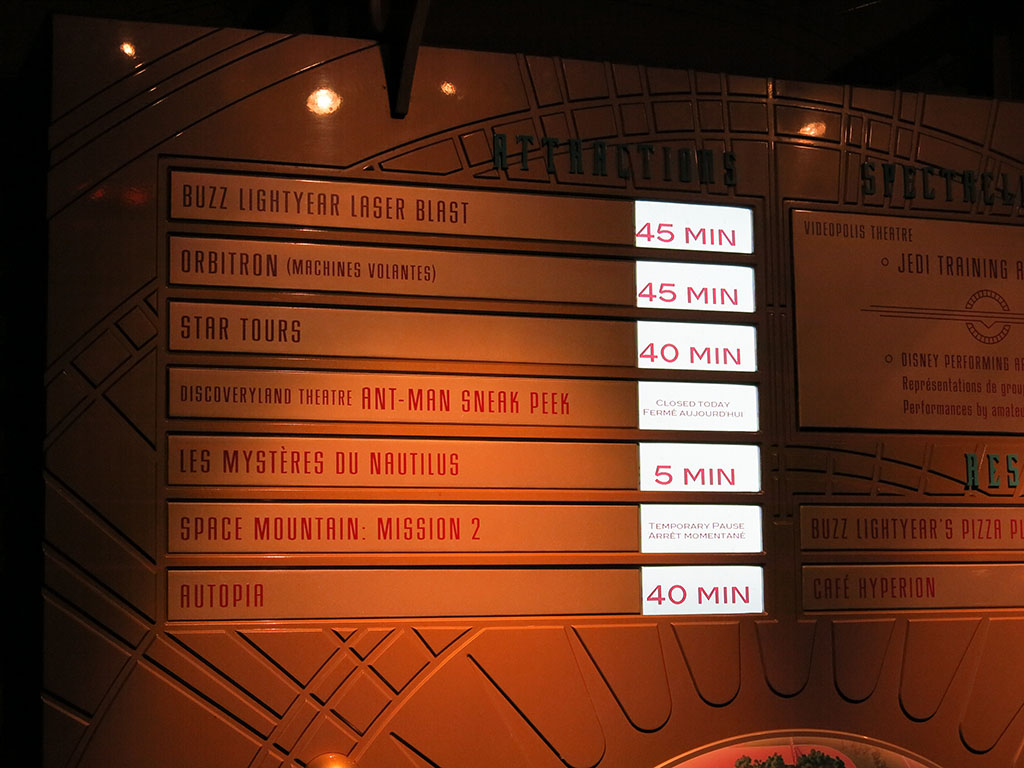 The only other ride I was keen to jump on was Space Mountain, as it hold a place dear in my heart at Paris Disneyland. Many of you have heard this story, but the short of it is that when I was here with my sister Meagan about a decade ago, we got stuck on Space Mountain. Yep, we were stuck on a rollercoaster. Not upside down, but a severe upward-facing angle, for 10 minutes before we had to get rescued off by staff. Cool huh?! I wanted to relive the past and had gotten a fast pass for it. I went back at my allocated time… temporarily closed! I wonder if it was doing the same tricks. Part of me wished I had gotten on it again, but the sensible part said to quit while I was ahead. 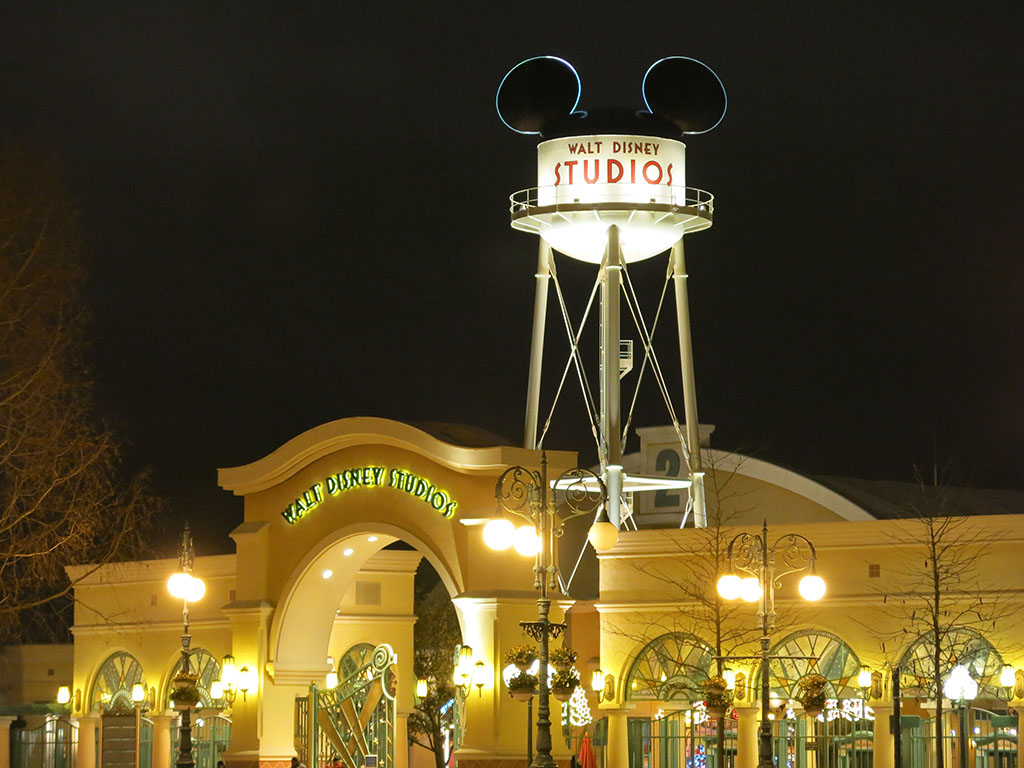 By this time it was getting quite late, and with some shopping done, it was time to call it a day. In 12 hours or so we did the two parks pretty cruisey and had enjoyed another Disney Christmas. Who knows when we would be back at another Disneyland (I am guessing in the not too distant future).