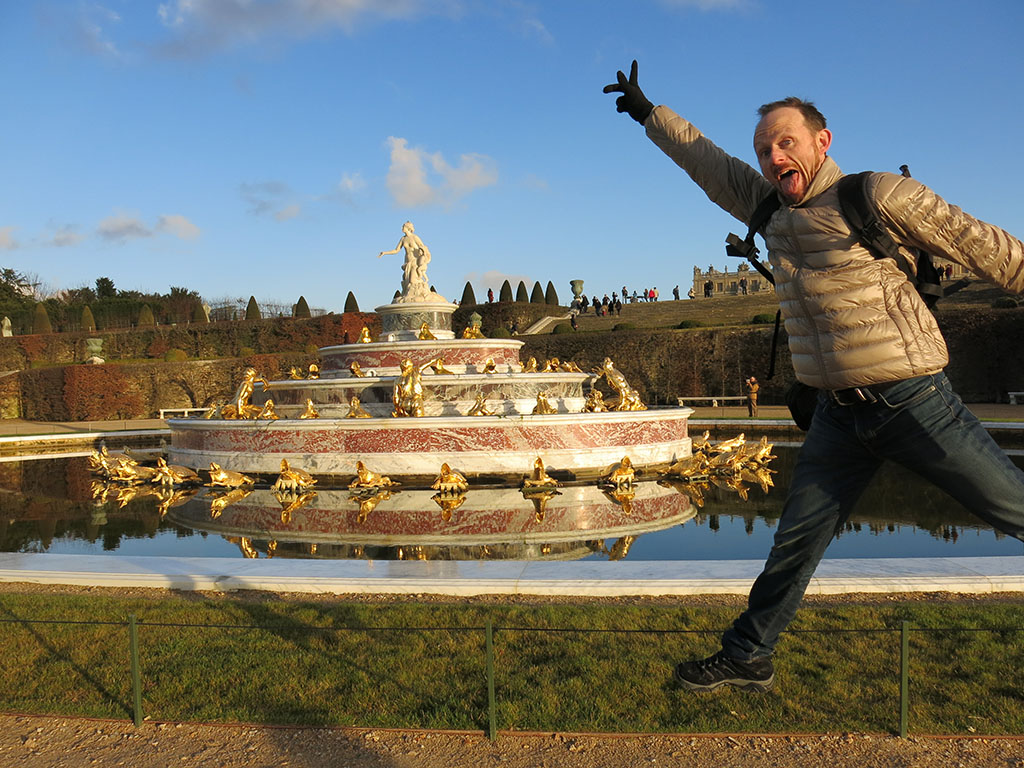 Kate had today all planned out. But sometimes the weather changes your plans hey? But in this case it wasn’t the “damn, it’s raining” type change, rather “boy, it’s gorgeous outside!”. So rather than do some more museums and the opera house, we decided to get our butts into gear, and hop on a train to Versailles.

I had been to Versailles way back in 2000, and Kate had been before but had not had a chance to explore much of the grounds, so it was always a plan to go. But given much of the fun of the day is wandering the gardens we decided to jump on the nice day.

I know you all know, but Versailles was the royal chateau for a while, when Louis XIV moved out to the (then) countryside to chill out and party and do business. The site has the main chateau and then huge gardens that house some other important historic buildings, including where Marie Antoinette resided. Apologies (or thankfully!), this is probably the extent of the history lesson for you! It is to keep my historical ignorance and mistakes to a minimum 🙂 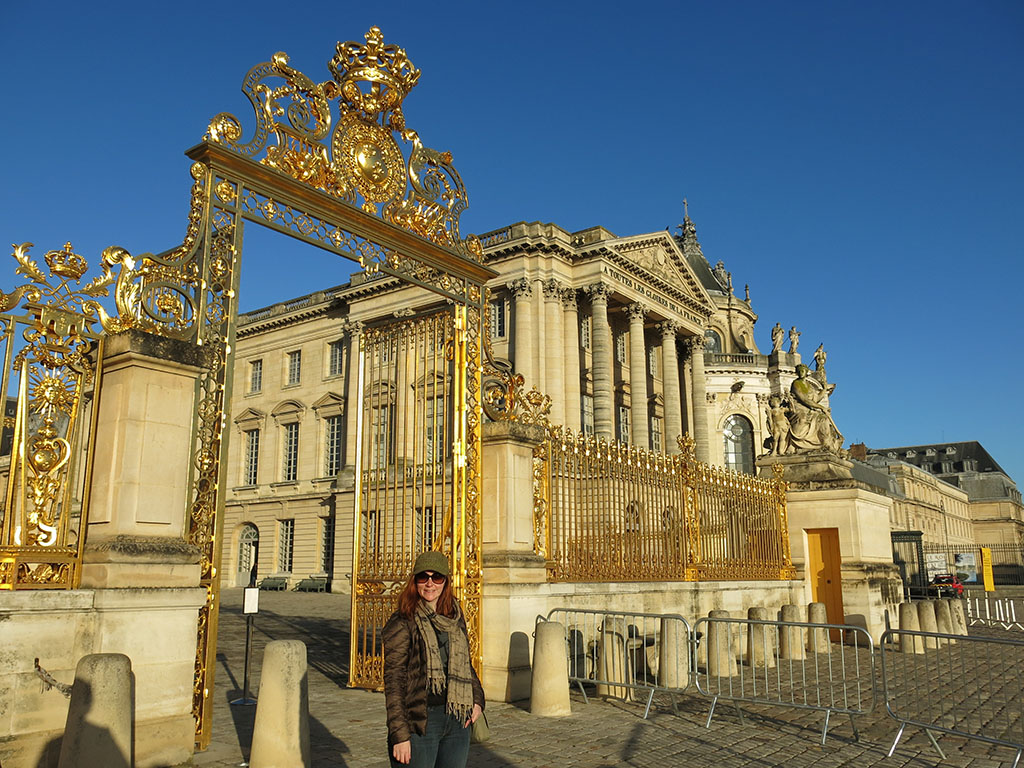 get ready for lots of gold

A short 45 minute train ride and we were in the township of Versailles itself and did the short wander to the palace itself. Like yesterday we enjoyed the benefits of being here in low tourist season, and had no wait at all. Even nicer was that we only had to compete with a handful of tourist buses and their hoards. 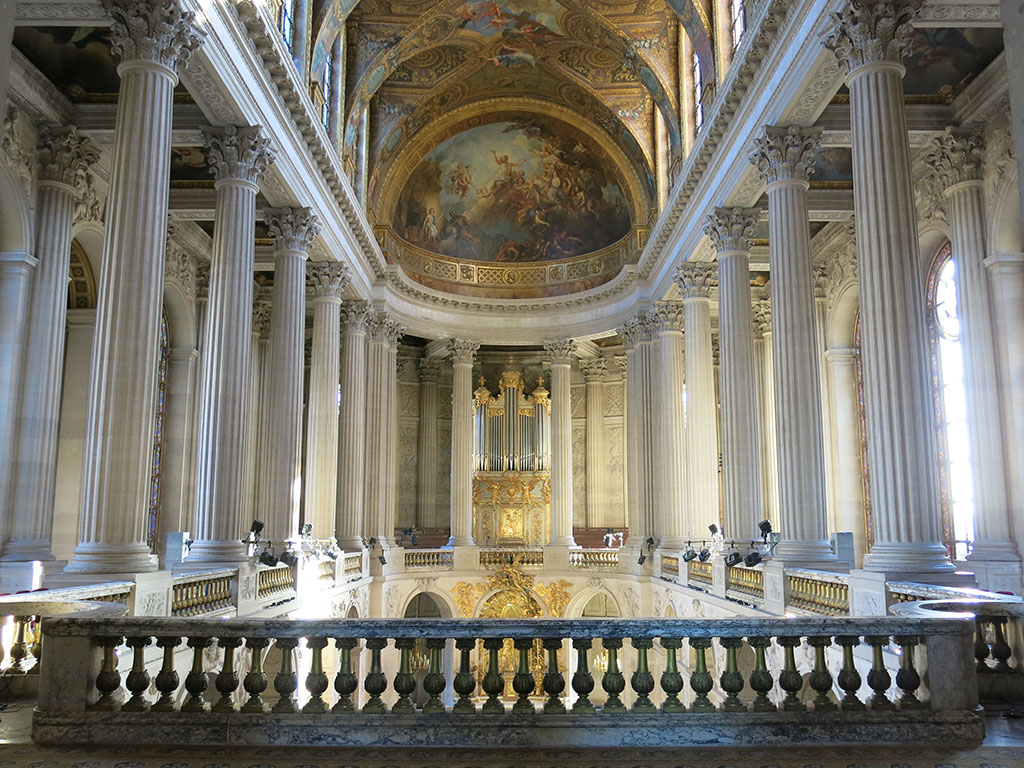 We decided to start by touring through the palace. For those that haven’t been, it is all about walking through the opulence and soaking up the ways of living from back in the 17th century. 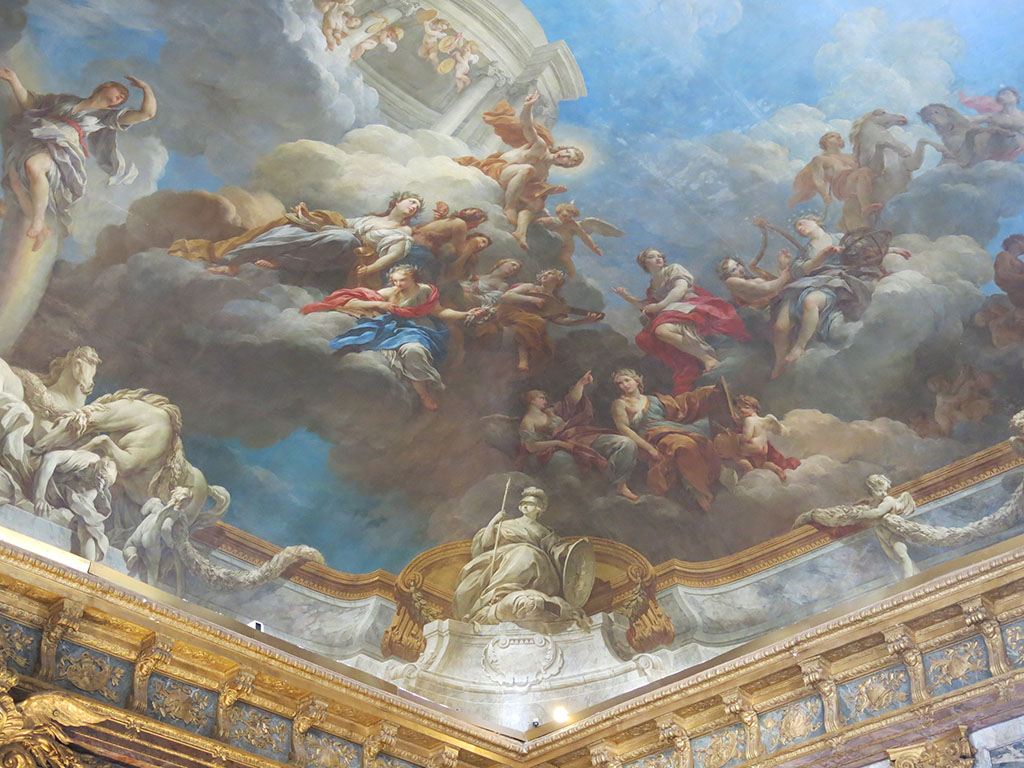 just decided the ceiling needed a bit of paint 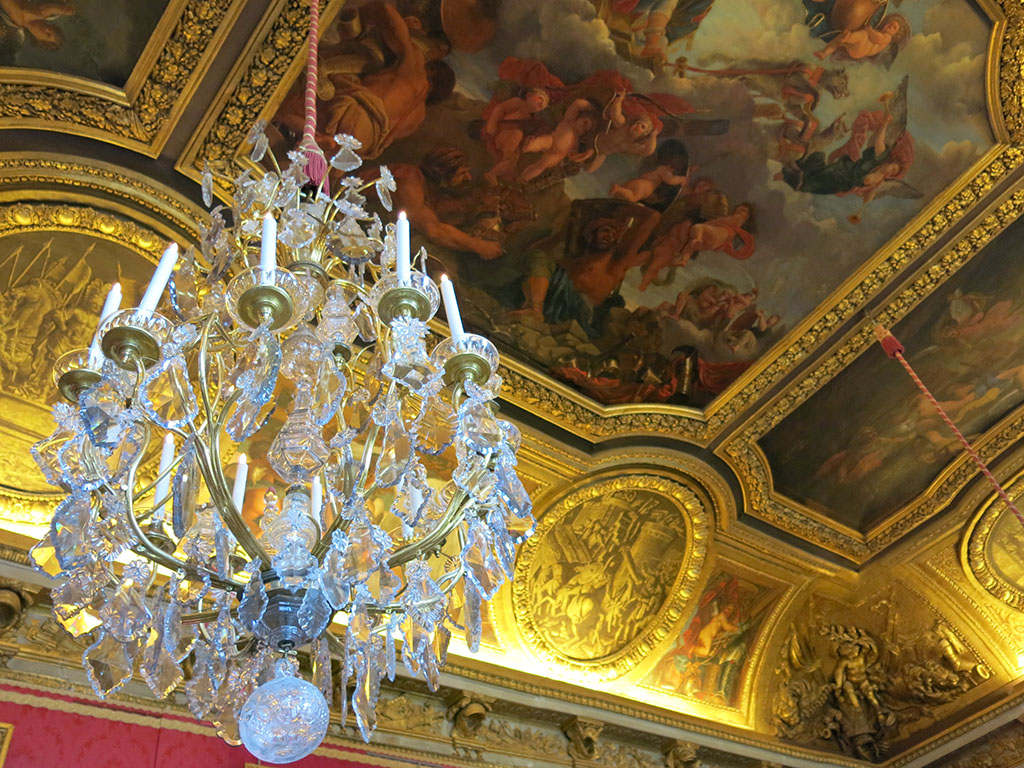 could use that in our house 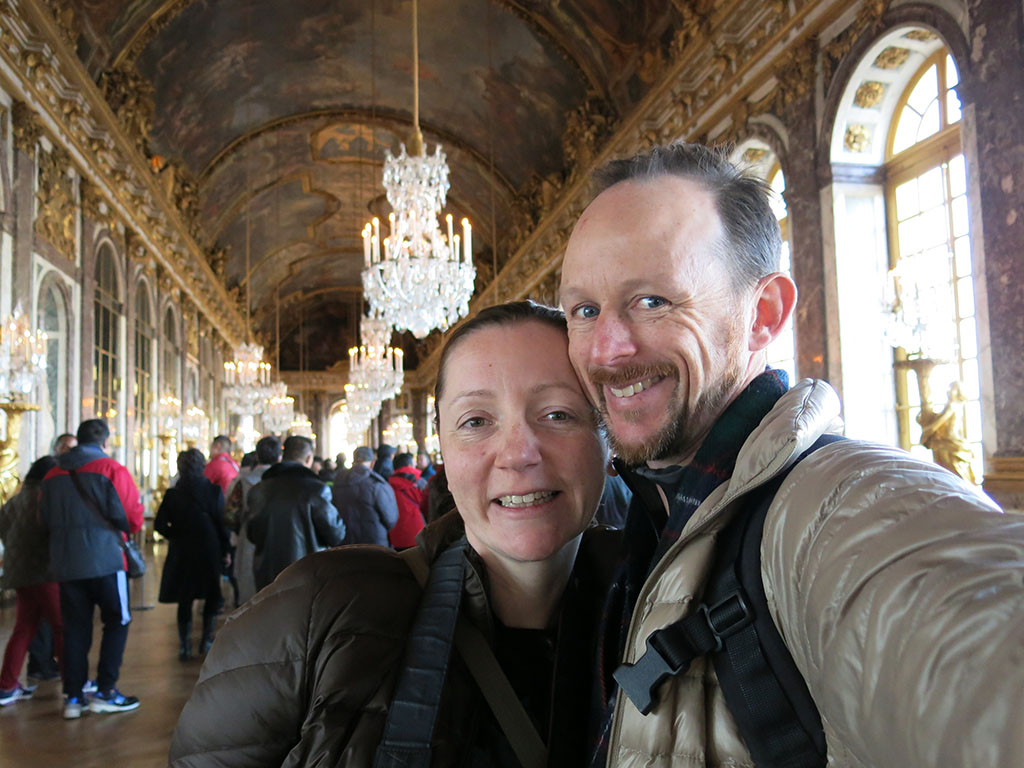 do we look at home?

The self guided tour leads you through the many furnished apartments throughout… the State Apartments, Kings and Queens. All decked out in their seemingly total impractical nature. There were constant questions of “how could you just relax in here?!” or “boy that bed is small!” or “check out that chandelier!”. 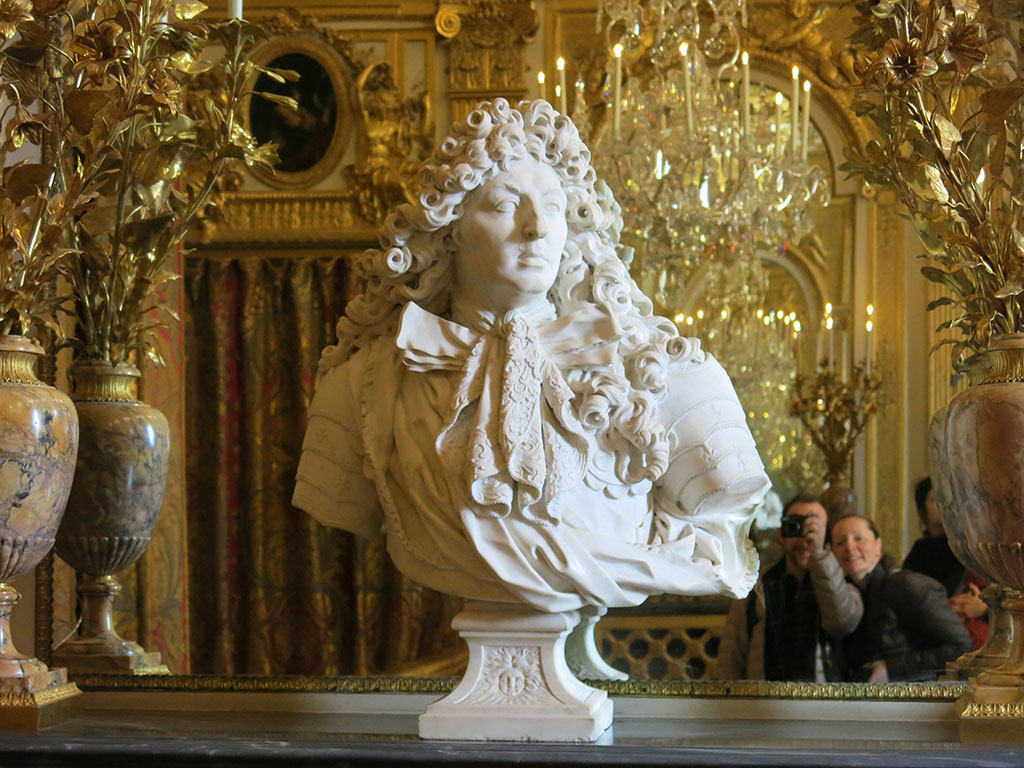 louis xiv watching over us 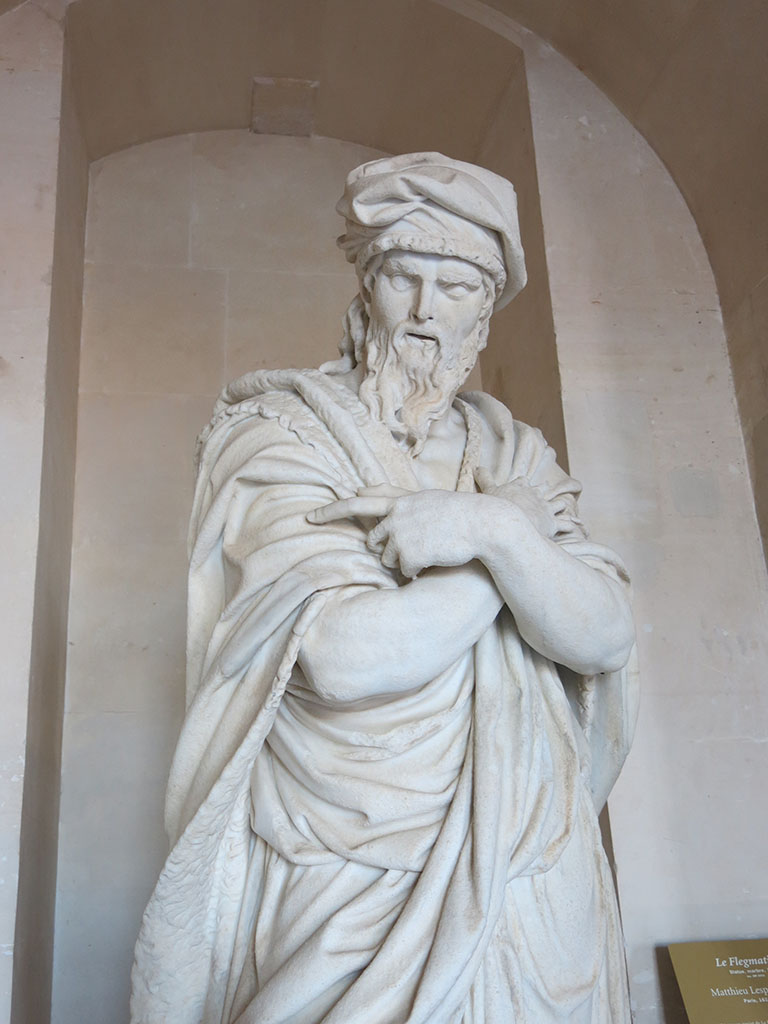 As we went around we constantly snapped pics of the extravagance of the palace. As Kate just said, it sure is a big palace for French kings and queens! 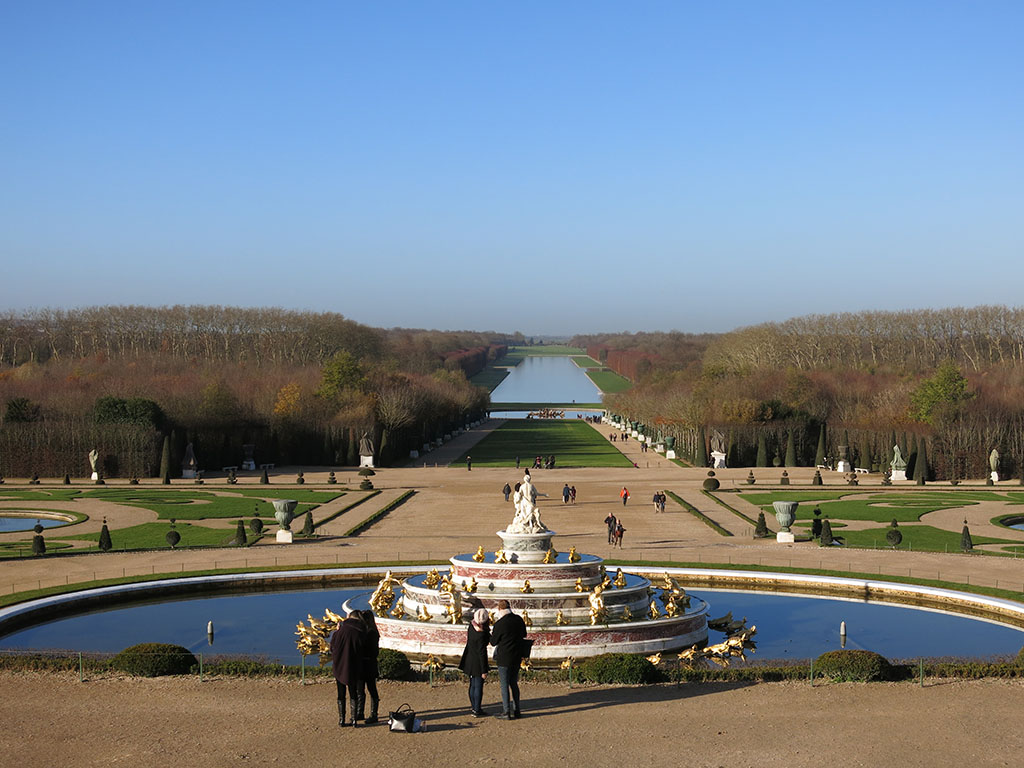 Because of the small number of tourists we found ourselves making our way through much faster than we remembered. So with a quick bite to eat, we headed out into the gardens and off toward the back corner of the grounds to visit some more of the palace buildings. 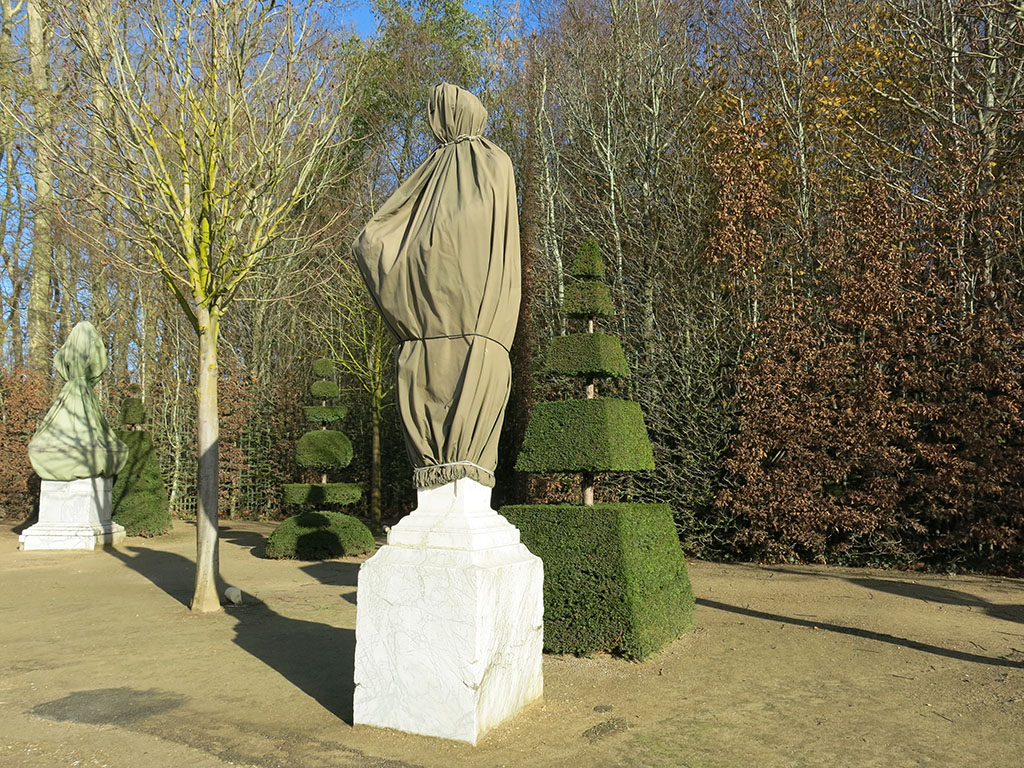 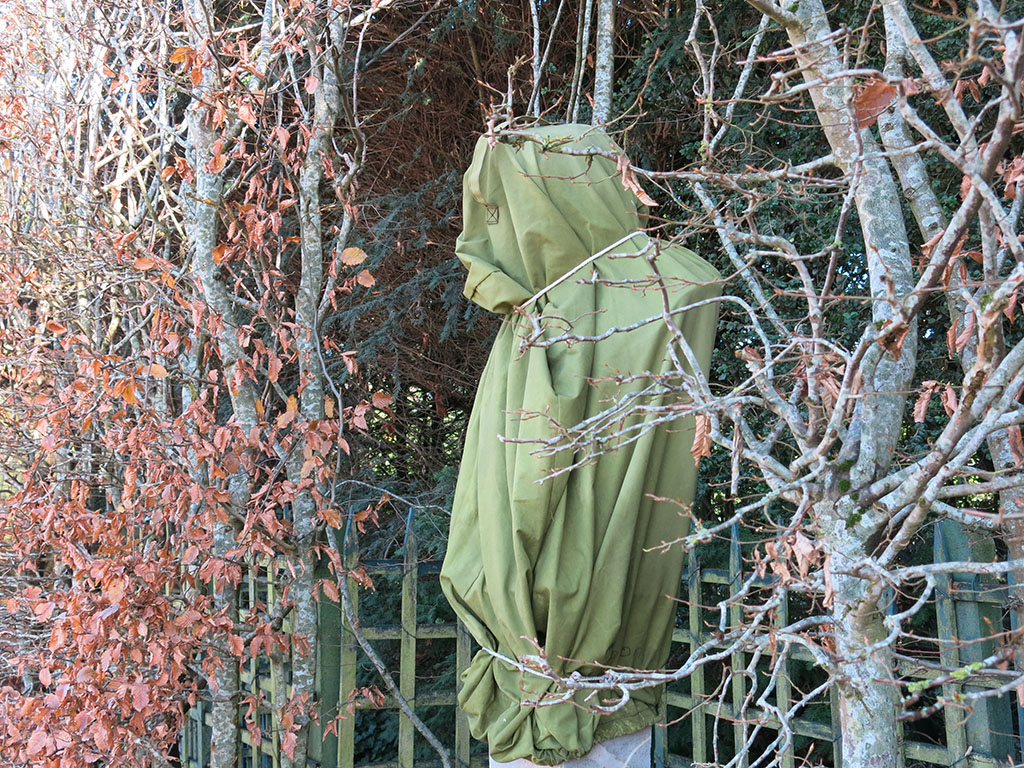 What was quite odd about being here in winter is that all the stone busts and statues were covered up. We could only assume it was to protect against the weather. But man, it sure made for some creepy images! Seeing the stark trees and the covered figures, it was like we were in a horror film! 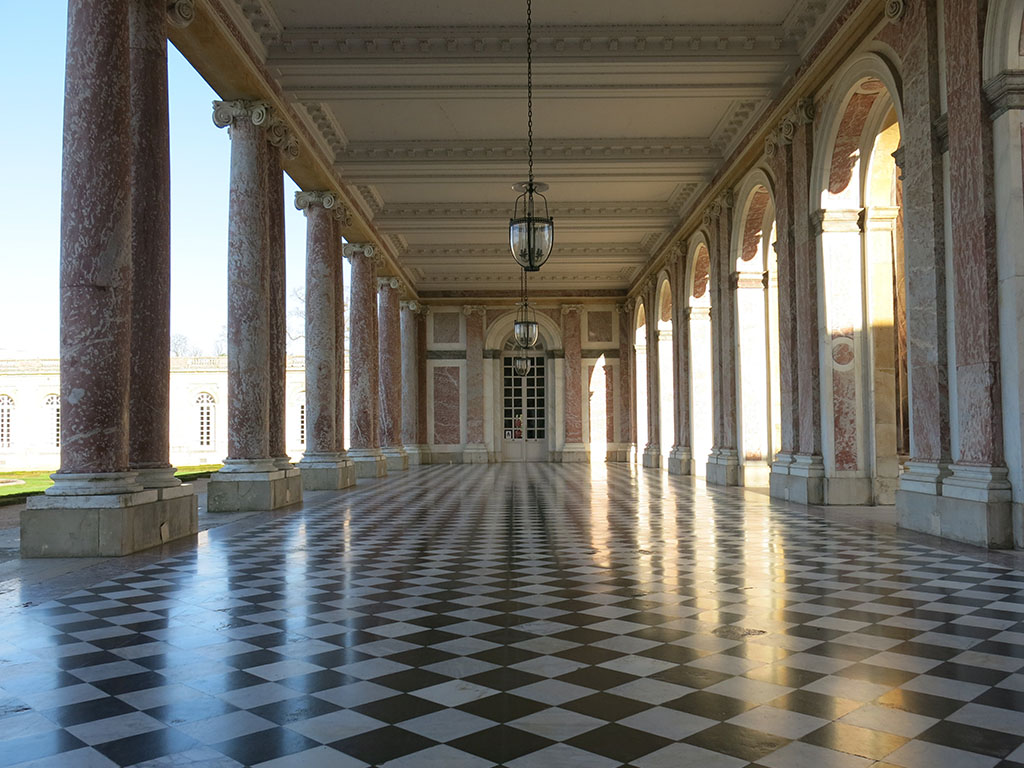 inside the big trianon

The wander was super nice… brisk, but beautiful in the sunshine. Our next point of call was the Grand Trianon, a retreat for the king where he also got up to shenanigans with his head mistress. This building could be seen as a mini chateau… a smaller building but still decked out in 17th century opulence. Again, it was delightful to wander through and in this case the marble work was something else. 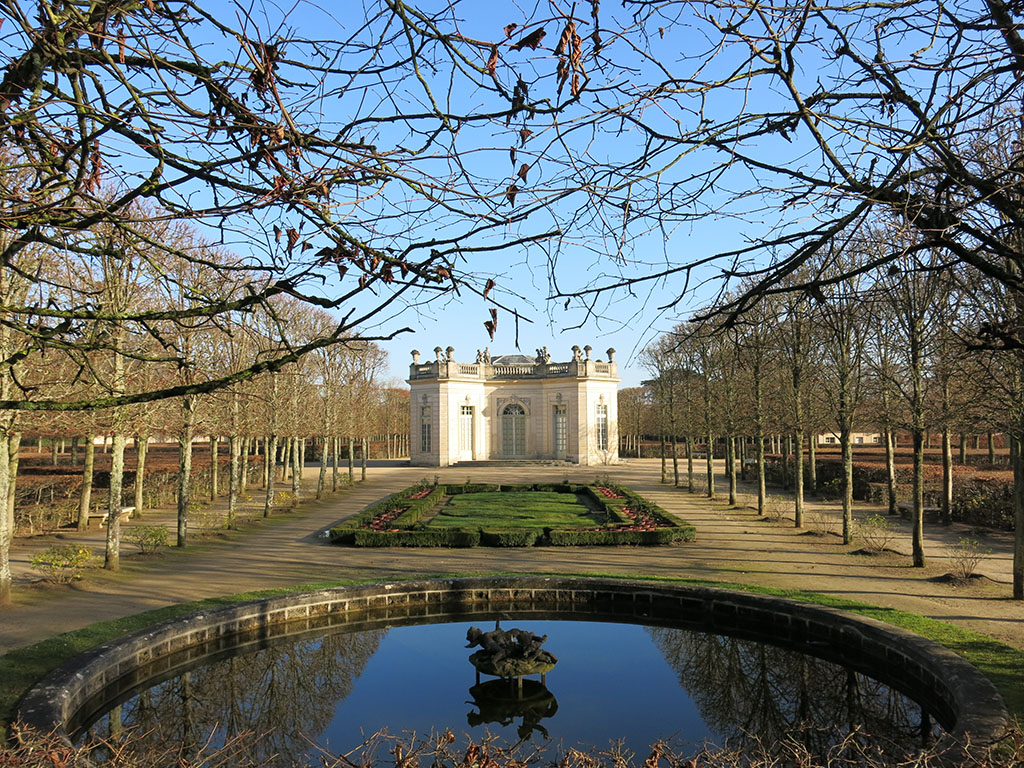 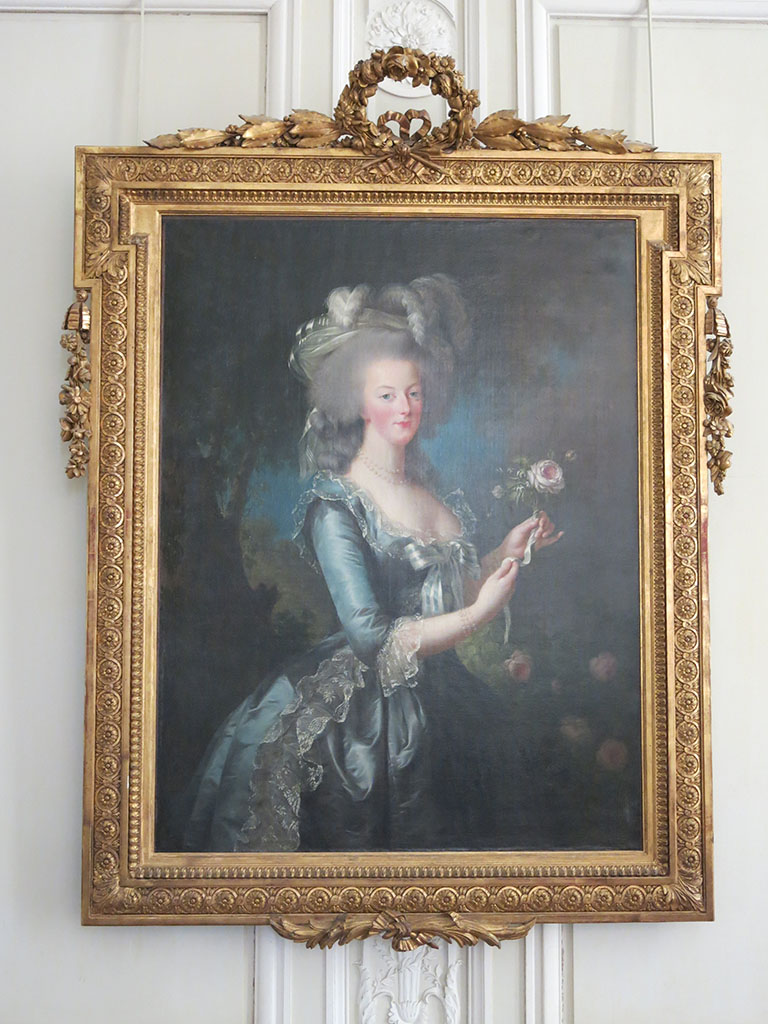 Next it was back into the gardens to check out the little sibling of the Grand Trianon, Petit Trianon. The petite version was all about removing as many formalities as possible, and as such was much less of showing wealth and privilege, and much more about functional living. This was so much so that Marie Antoinette was said to have favoured this chateau to get away from the formalities of her life. 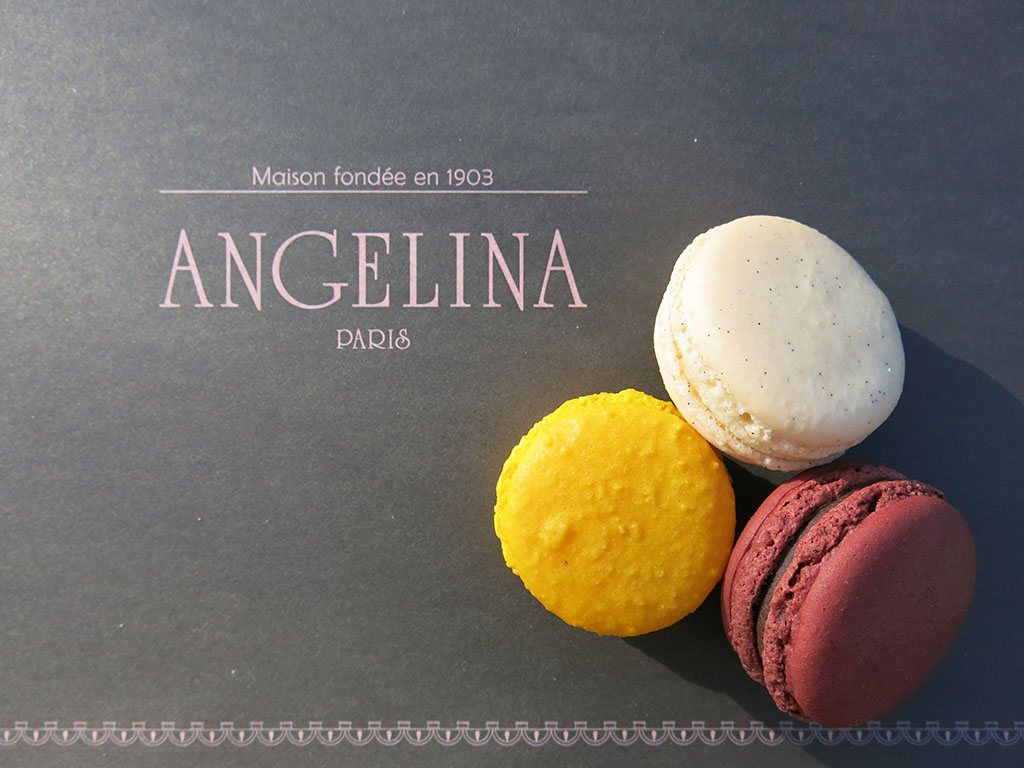 Given where we were, and being surrounded by extravagance, we thought it appropriate to do some indulging ourselves. How you ask? With macarons! Yum! We could resist having an Angelinas here at Versailles and not take advantage. I tossed up between pistachio and lemon, and went the lemon macaron (as well as some of Kate’s chocolate and vanilla). Mmmm… they hit the spot. 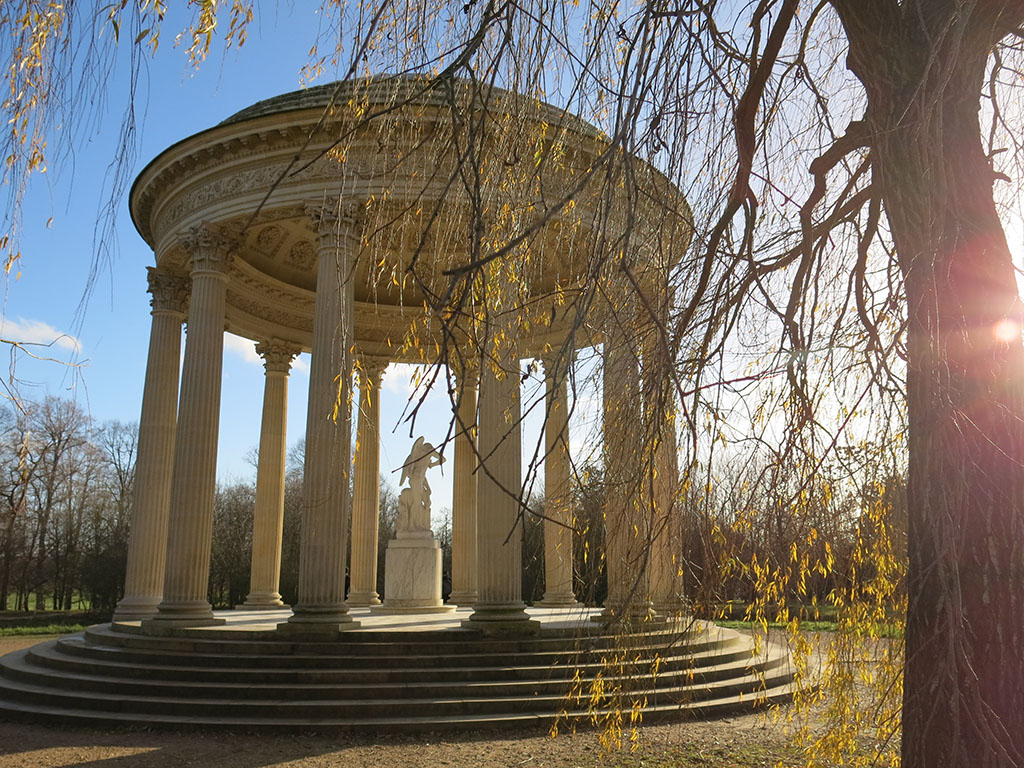 On our wanders we came across the cute Temple de l’Amore, or the temple of love. With the day being gloriously sunny it was really charing sitting there amongst the gardens. 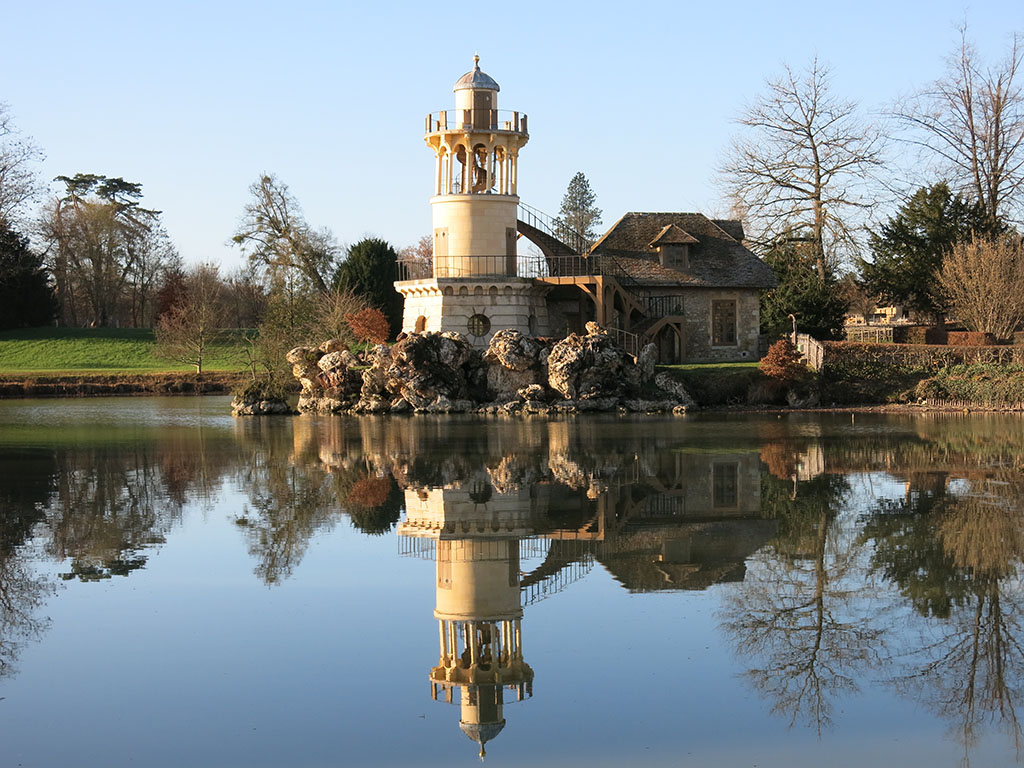 popping in to see the locals

Our final destination in the gardens was in many respects the most odd. It was a collection of buildings affectionately known as Marie Antoinette’s Hamlet… a collection of farm houses that were built to help her realise her dream of being a milkmaid. Yep, you read that right. As such the buildings were a really oddball collection of British influenced cottages, complete with streams and waterwheels. There was even a working farm still there, complete with goats and chickens. How strange! Really cute but just totally weird all at once. 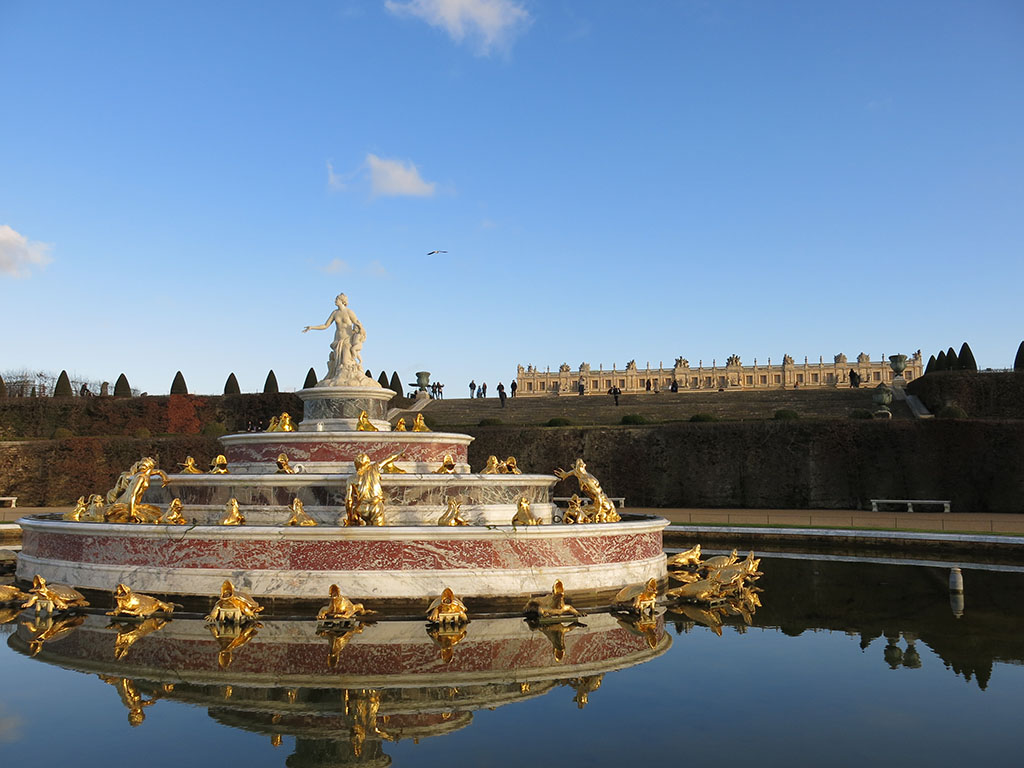 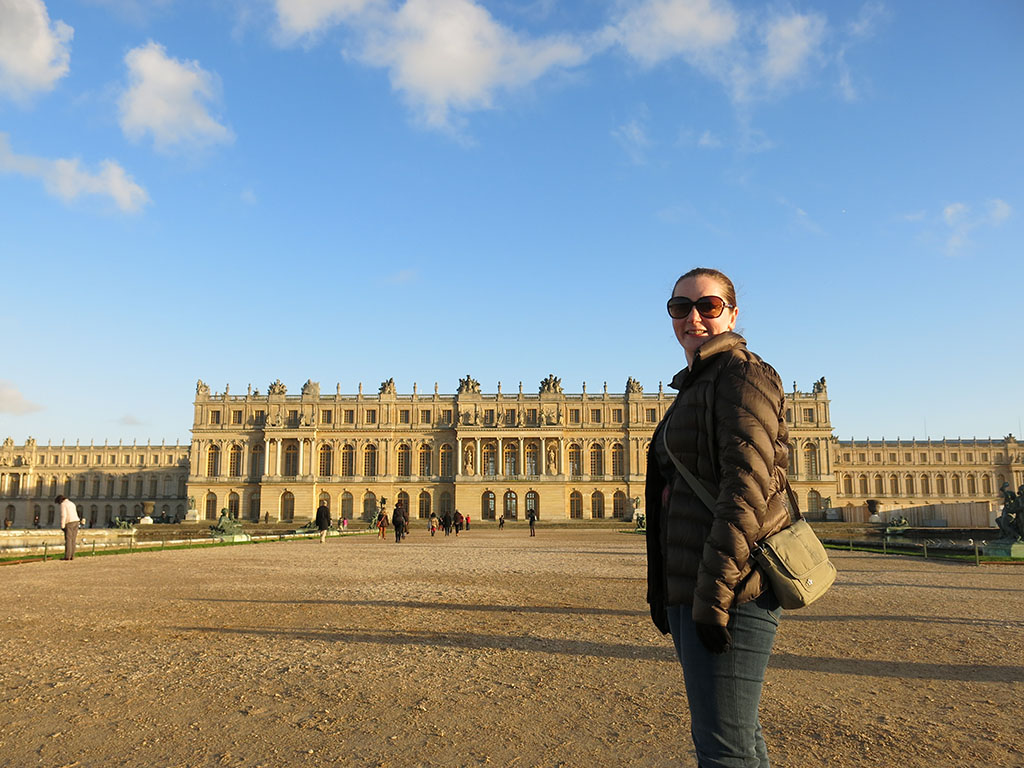 With the grounds explored (not nearly the whole lot, but a sizeable chunk) we wandered back to the main chateau, the day fast disappearing. We had been on the go for many hours and so it was time to jump on a train back to Paris.

We had plans of popping back to see Rodin, or visiting the Arc de Triomphe on our return, but by the time we got back into the city we were just a bit tired and hungry. So rather, we opted for some delicious crepes (savoury and sweet!) near our hotel and just relaxed for the rest of the night. In no time we were both fast asleep. Too much good living can do that to you.