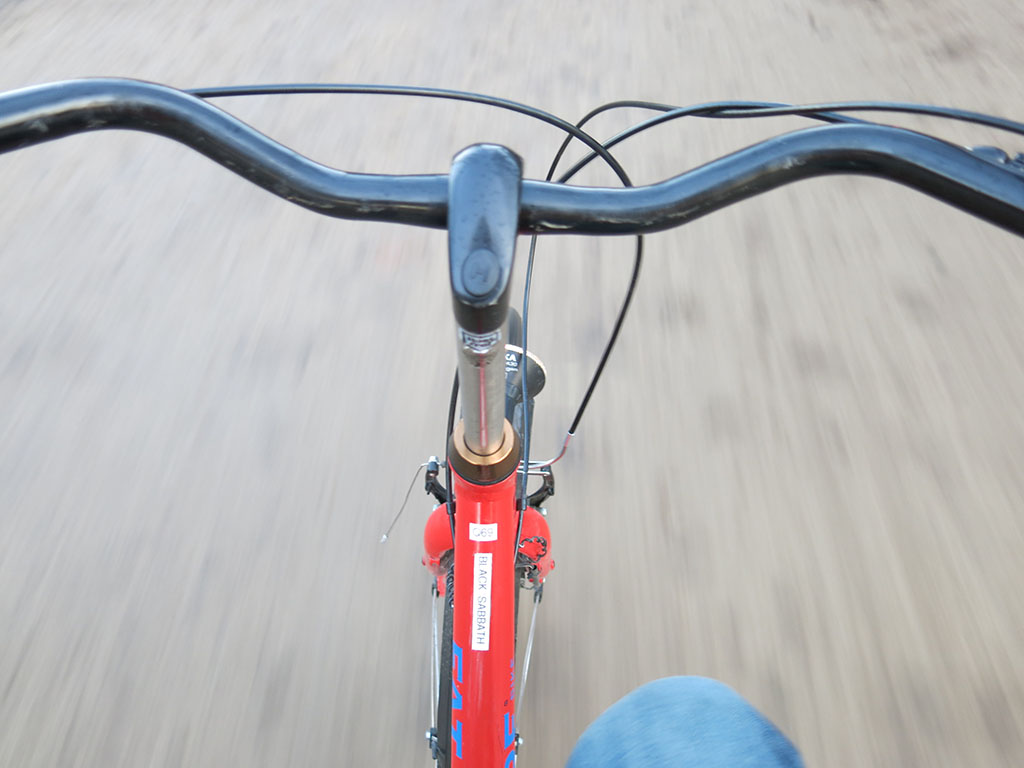 We had been in Berlin for about 5 days or so and I was still having a little trouble wrapping my head around the layout of the city. That’s what happens when you mostly use the S and U Bahn to get about. So I was super excited for today’s activity… seeing Berlin on bike.

We had the Berlin Fat Bike tours recommended to us and as you can expect I was keen to spend a day on a bike exploring the city. So at mid-morning we headed to Alexanderplatz to meet up with the Fat Bike crew. 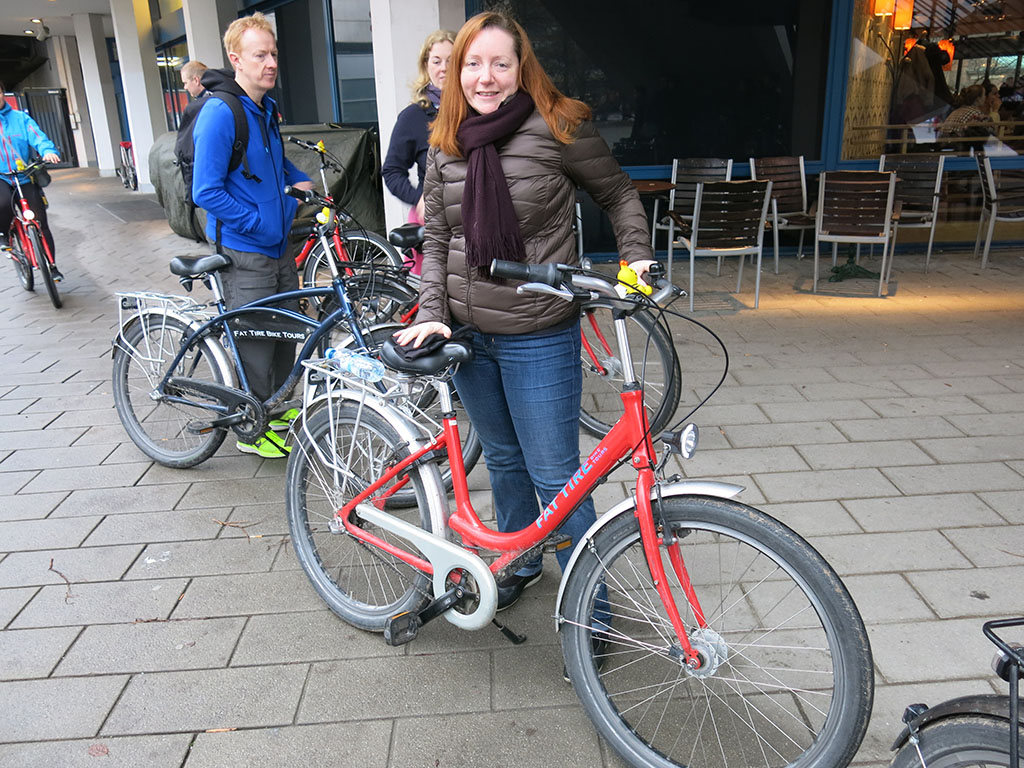 Seems these are pretty popular as there ended up being about 50 people that were split up across 4 groups to spend 4+ hours exploring the city. Walid, an ex-pat Brit, was our guide and once we had broken up into our groups got a quick intro. It turned out that the group needed someone to take on a key role in the group. Ass man. Yep. Someone to be designated at the back of the group that our leader could keep an eye on to know he had the whole group. Thanks to my yellow beanie, I decided to offer to take the role. Why not?

So with my trusty steed, “Black Sabbath” (all the bikes were given random names related to no consistent theme… Kate had “Ngorongoro Crater”), off we went.

While we were going to be visiting some places we had already been to, the idea of the tour was to understand the city, its geography and history, better. For me, it was also just about seeing a city by bike.

Ah, the liberation of riding without a helmet! Don’t get me wrong… I wouldn’t do it at home. But there is something very nice about the opportunity to ride with the wind through the hair (or the beanie as it were). 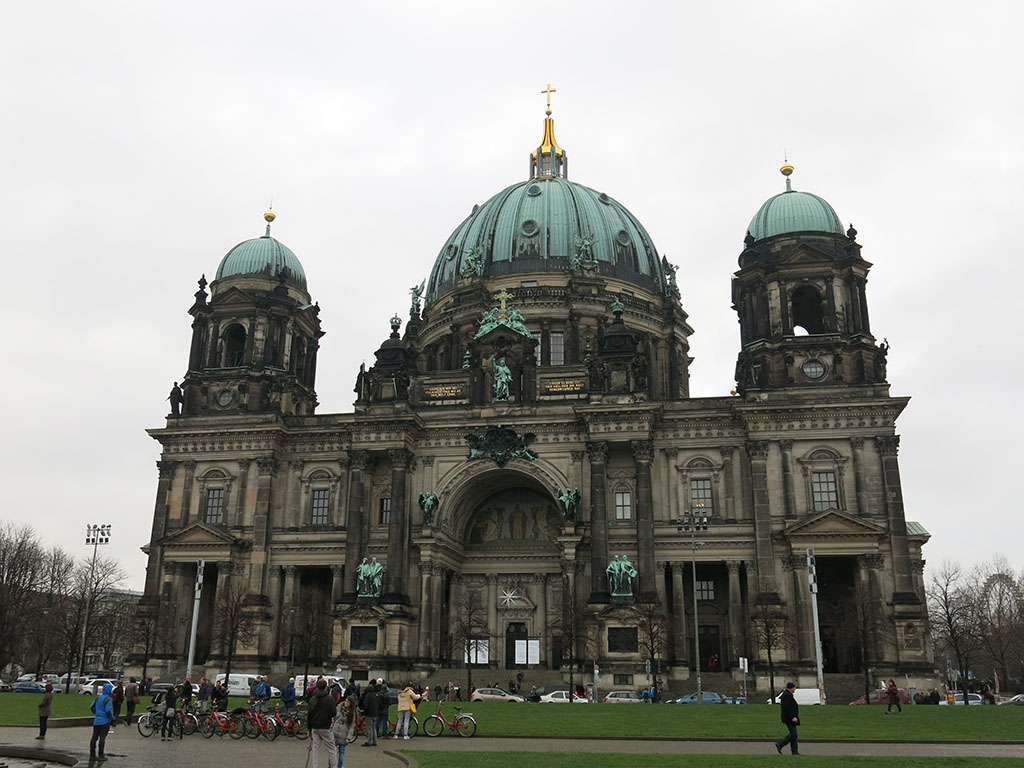 From Alexanderplatz we headed to nearby Museum Island, where we were given a rundown of the history of the island as well as the Berliner Dom, the big church also located on the island. It was now that Walid put his finger on one of the things that makes Berlin quite compelling… that while we seem to be looking at buildings centuries old, the reality is most things are only a few decades of age, rebuilt to resemble their destroyed counterparts. So that poses a fascinating question of whether you rebuild to resemble the past or forge a new direction. Berlin indeed seems to have a foot in both camps, wrestling with the outcomes of the past half century. 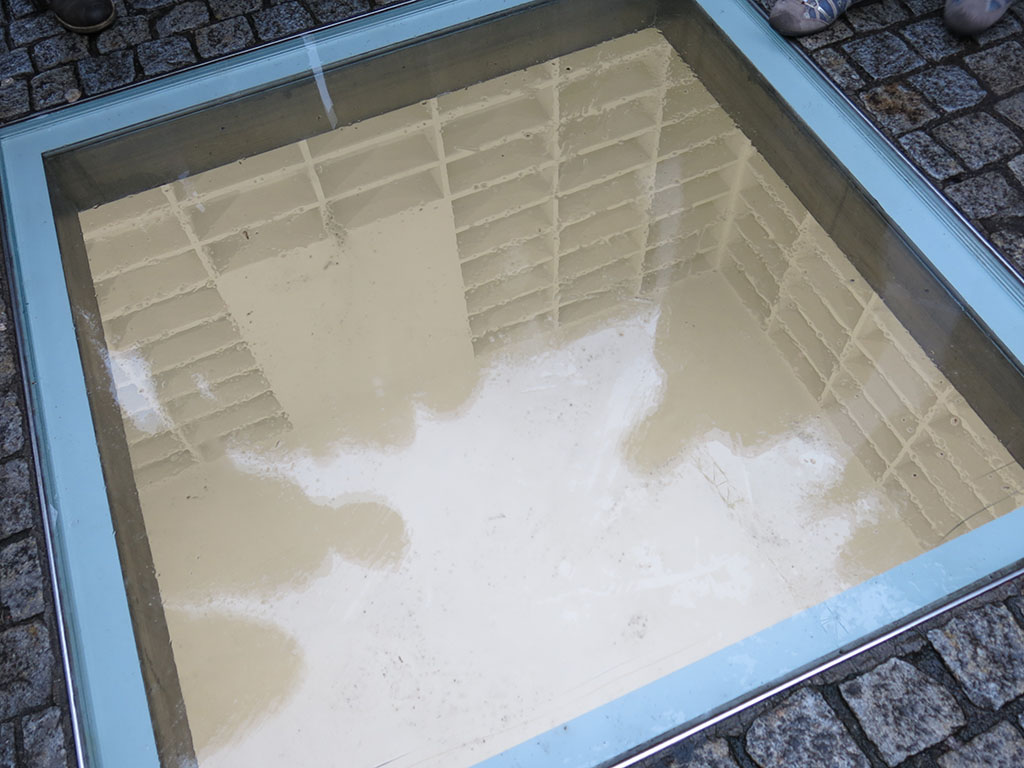 Next was one of the courtyards of Humbolt University, home to many many Nobel prize winners (including one Albert Einstein). It was here that was one of the more notorious moments in Berlin history, a mass burning of approximately 20,000 books. To recognise this, the courtyard is home to a very subtle memorial… a window down into an empty library. If you didn’t know it was there you would likely walk over the top. Seems Berlin is full of memorials, many subtle in nature like this. 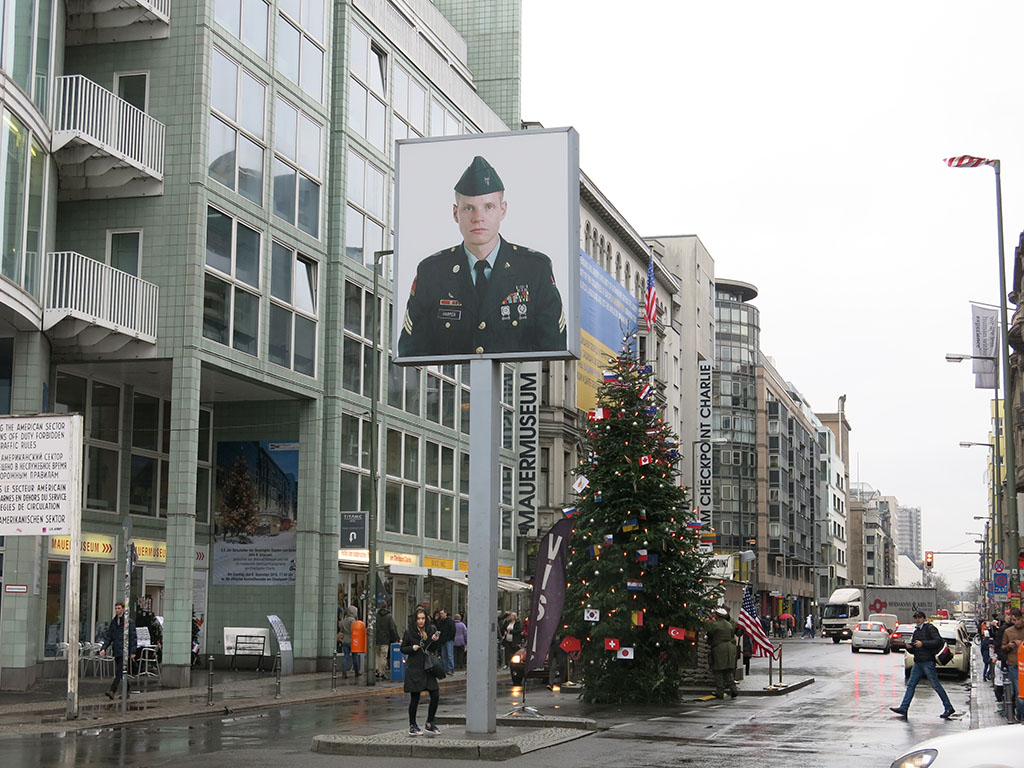 We stopped by Checkpoint Charlie next. It was much busier than the previous night and bustling with tourists and faux soldiers. 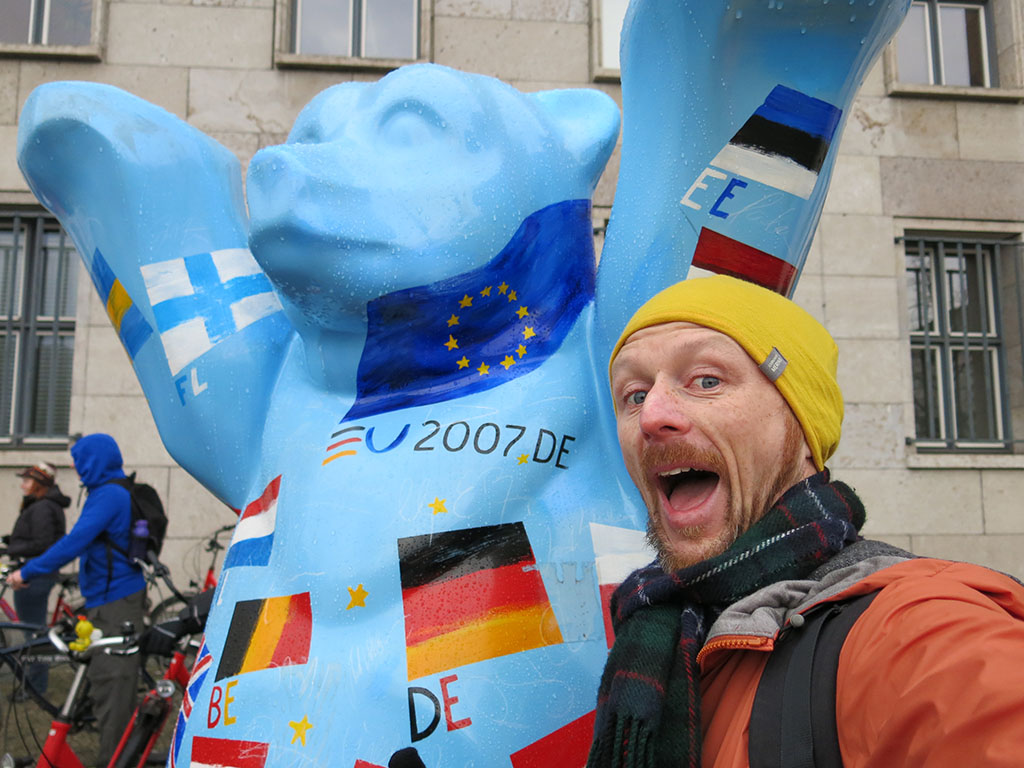 After a quick selfie with one of the ubiquitous Berlin bears, we hit the road again. 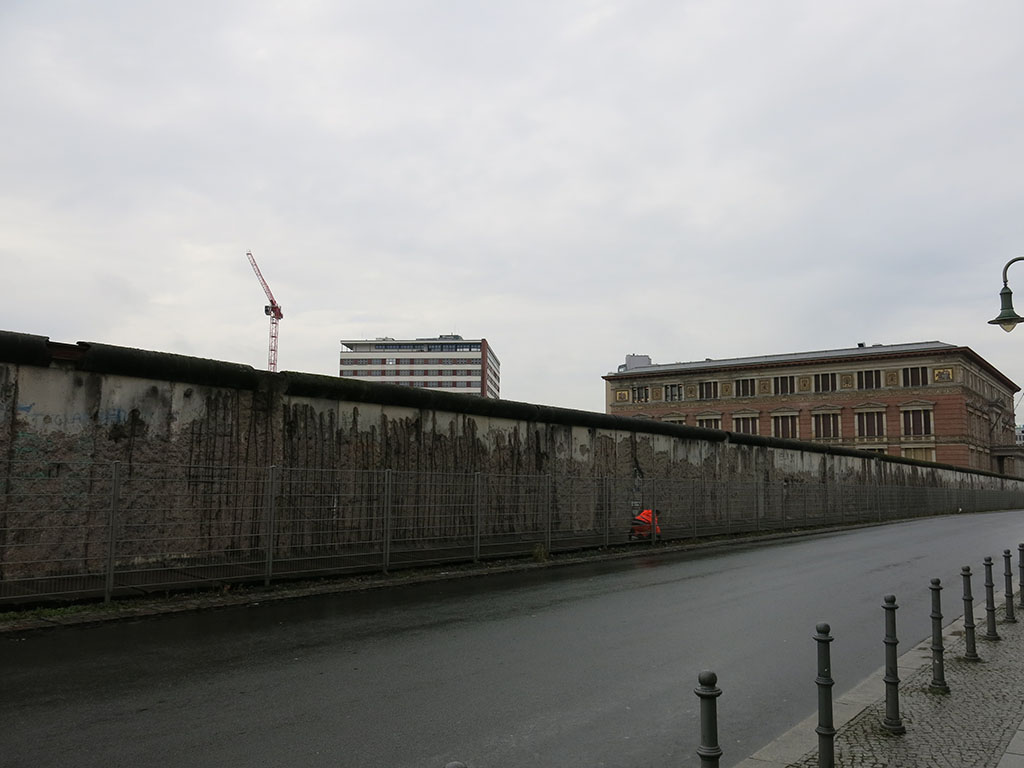 Just nearby were two remnants from the past decades. The first was a 200m stretch of the Berlin Wall, part of the Topographies of Terror museum. What makes this museum quite amazing is that it is located on the site of the Gestapo buildings, which apparently was not know for sure until relatively recently. It was suspected but not full known, which made the stretch of wall and nearby government buildings all the more spooky. We would be revisiting this museum in the next day or so.

Also close down a nondescript street was the last remaining guard tower from the Wall era. No sign, plaque,or anything. Just a lonely tower still standing. No one else was around, which I found fascinating that it was still standing and not part of the tourist trail. Super haunting. 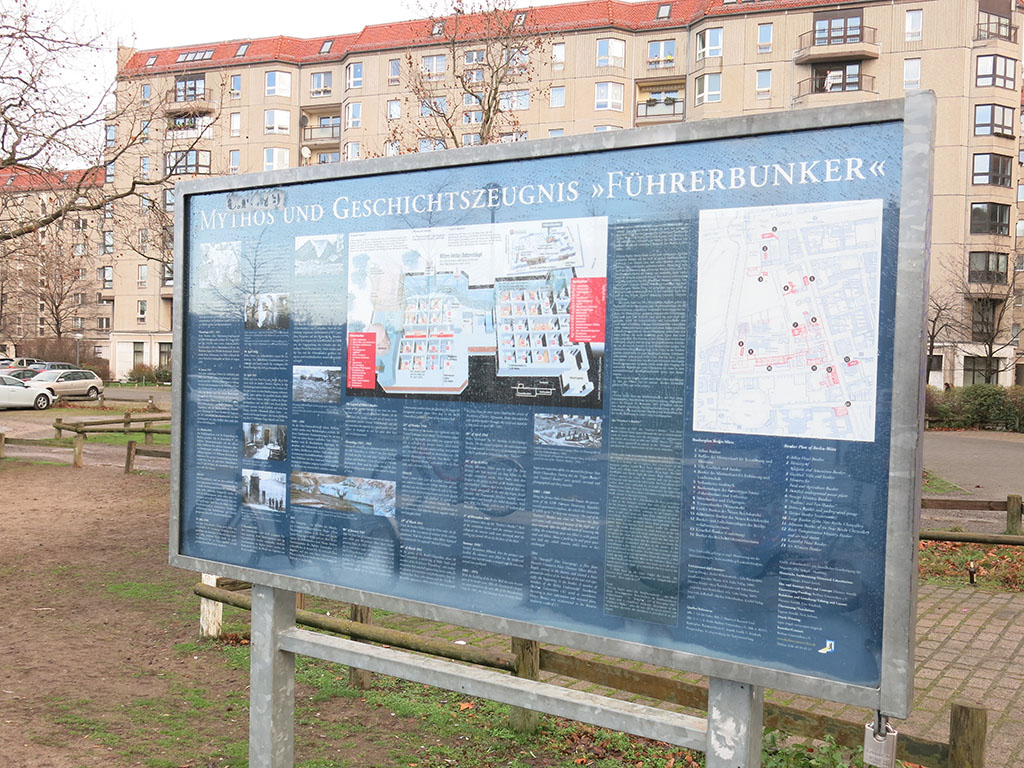 Speaking of haunting, we also visited an even more chilling location, that you would only know its history from one sign in the middle of a footpath in a street full of apartments. Below our feet was the infamous Fuhrerbunker, where Hitler bunkered down and eventually committed suicide. Walid explained why only a simple sign existed, that after attempting to destroy it unsuccessfully, the Berlin government did not want to make the bunker a memorial, so just filled it up and left it at that. Given the cities acknowledgement of everything else, I think this was probably for the best.

Next up was something else haunting but for all different reasons, the memorial for the fallen Jews. This is one that description really doesn’t do it justice. Thousands of concrete blocks of varying heights, put together in a really disorienting manner for the visitors wandering between them. With an undulating ground beneath your feet, wandering through them means you go from seeing above, surrounded by the blocks, to being in the middle, towered over by the concrete. 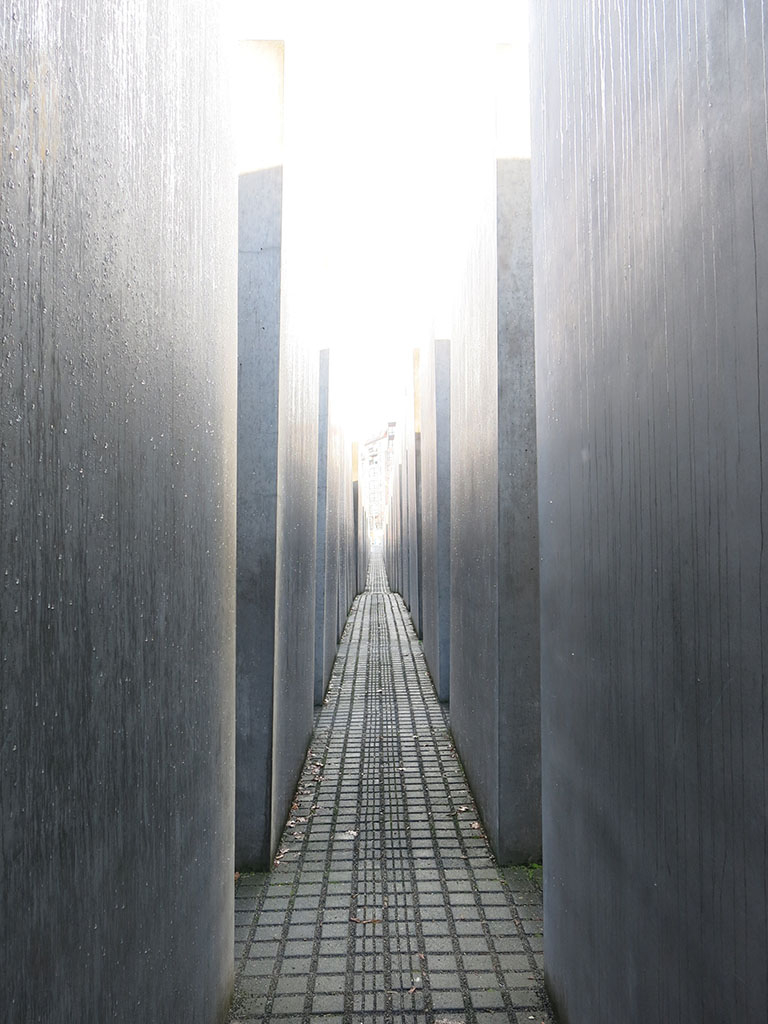 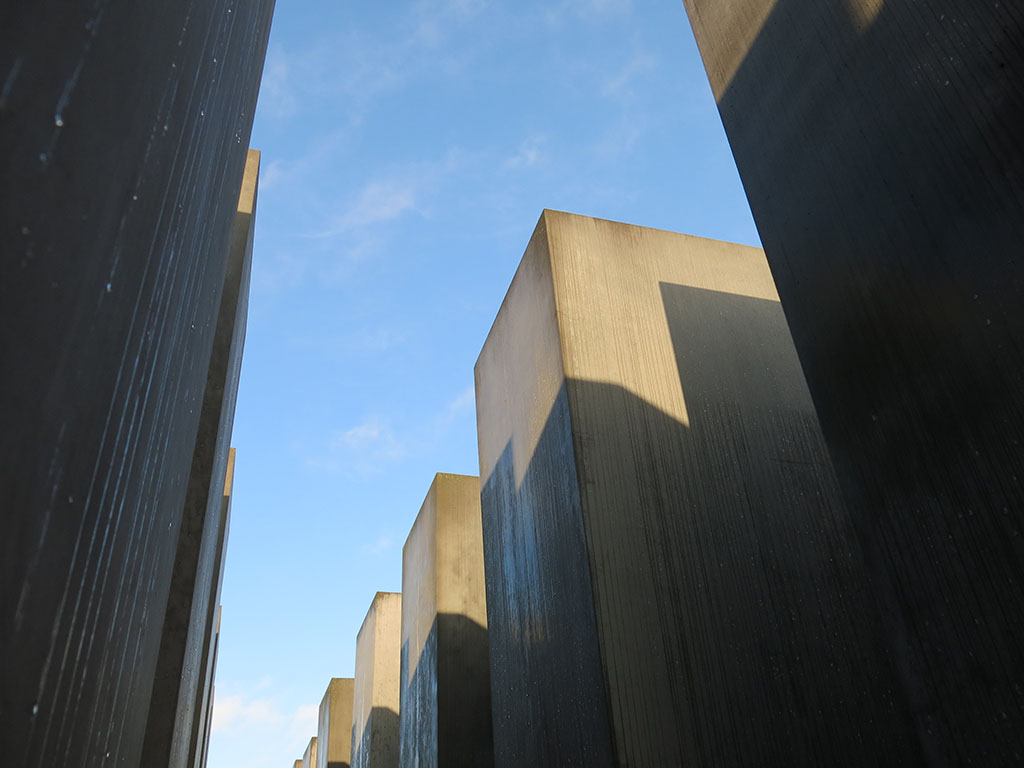 We only had 10 minutes to wander through but we knew we would have to return. 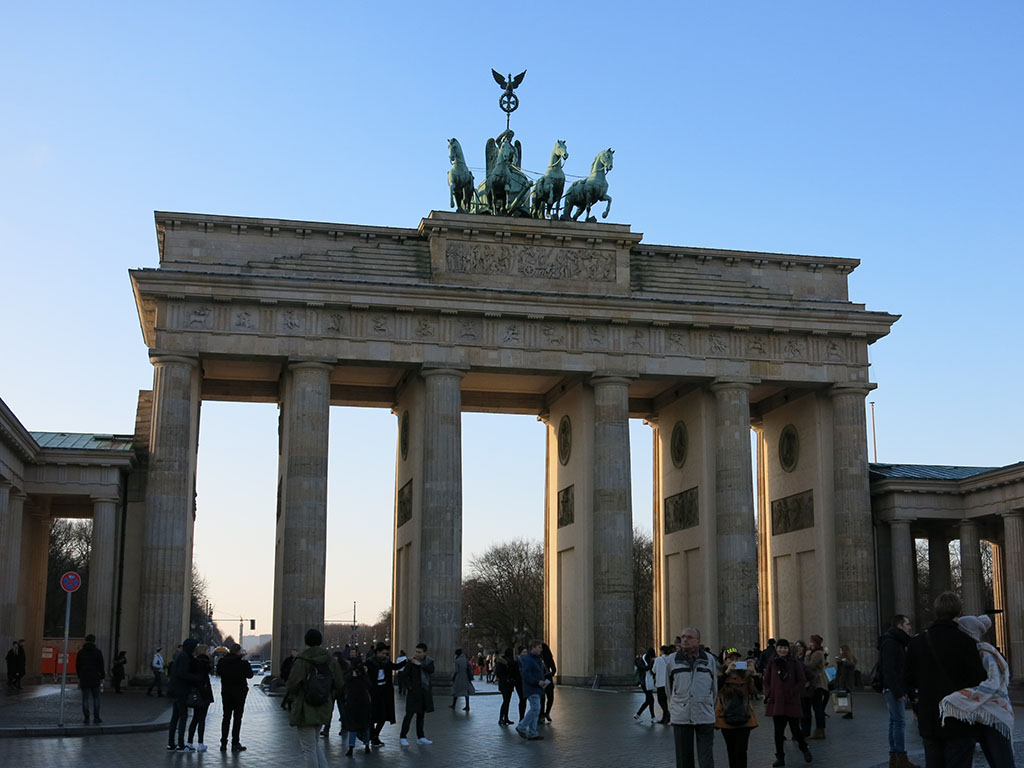 hello to the gate again!

The day was quickly approaching lunchtime, and with a quick burn past the Brandenburg Gate, it was into the Tiergarten, the massive parkland in the centre of Berlin. Hunting grounds for the previous aristocracy it is now home to cyclists and beer gardens and the towering Victory Column at its centre. 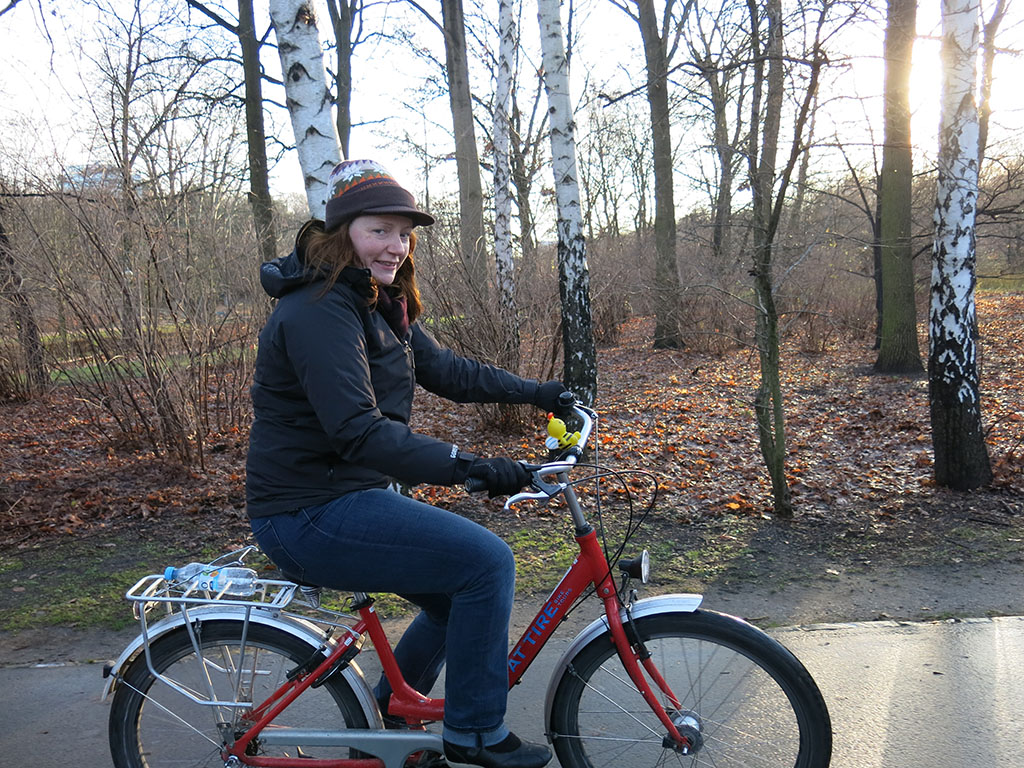 It was now it was really hitting home how different Berlin was to when I first visited all those years ago. Last time, also in mid December, this park was covered in a foot of snow. Today… nothing at all. I mentioned this to Walid, and he too was totally thrown by the fact there was no snow in Berlin. By now they expected the city to be covered. While it made getting around nice and easy, I have to say I was really disappointed not to encounter a snowy Berlin with white gardens and Christmas markets. 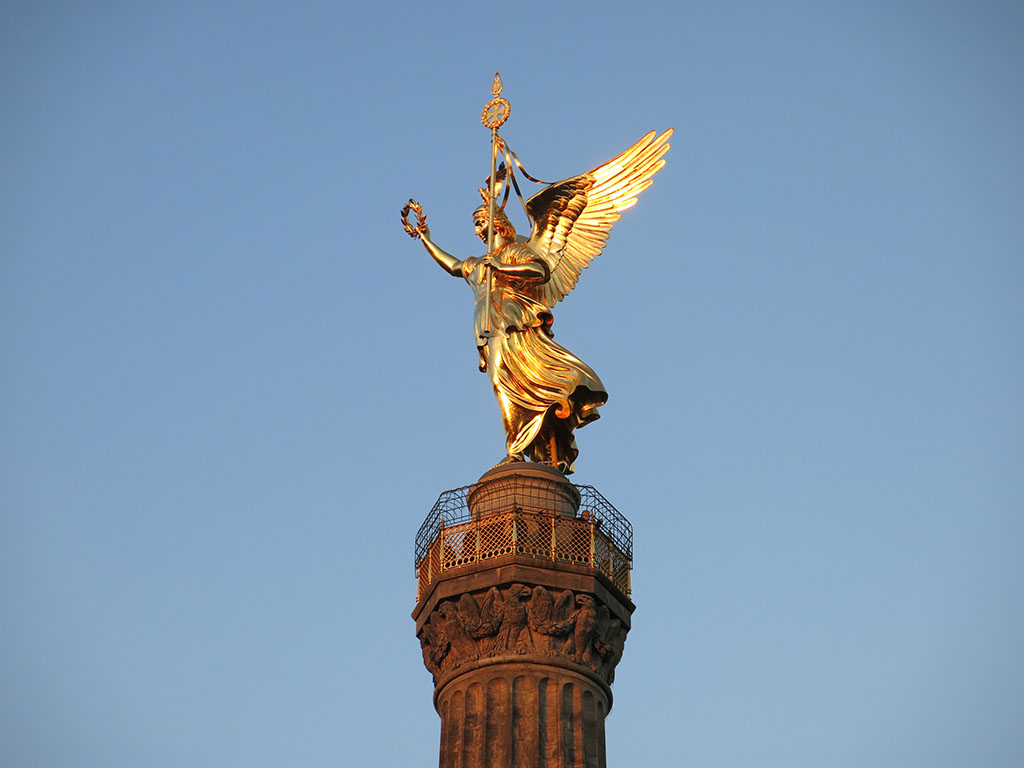 After riding by the Victoria perched on her Victory column, we reached a beer garden nestled in the gardens for some lunch and a brew. Mmmm…. a super tasty winter salad and a big beer and I was filled with sustenance for the rest of ride. 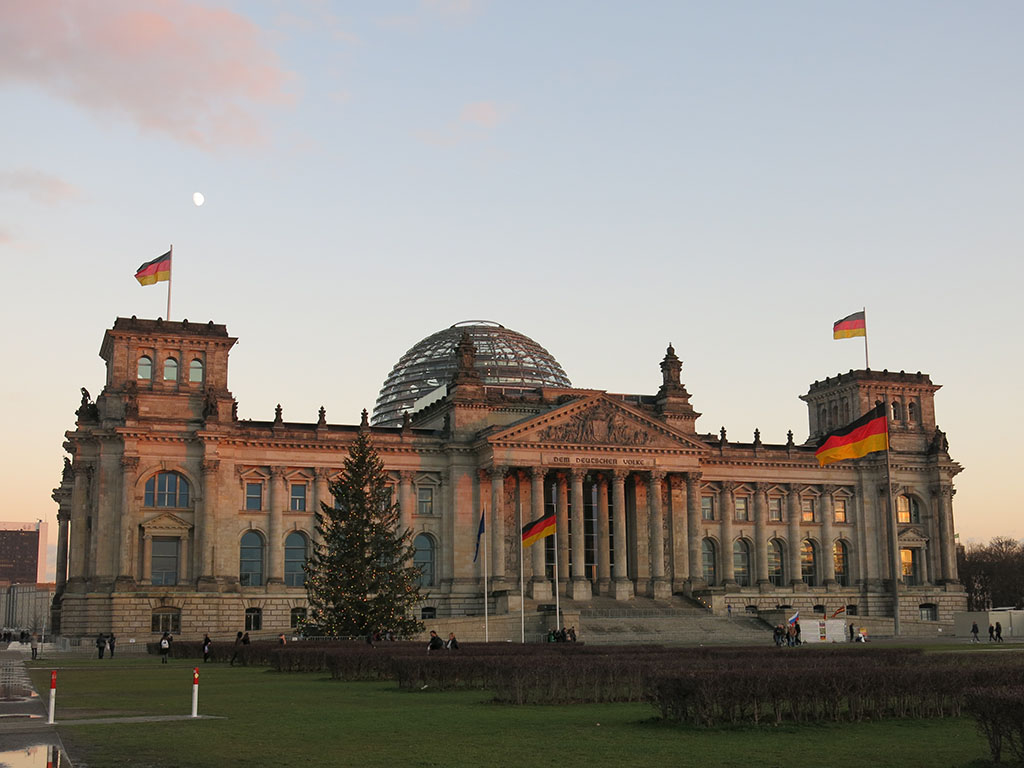 Which was not much actually. It was approaching 3pm and the light was starting to dim. From the garden we stopped by the Reichstag, the main government building in the city and home to the German parliament. The building is home to the well known huge glass dome that looks out over Berlin. We held tickets to visit the next morning so the fleeting visit in the fading light was OK. 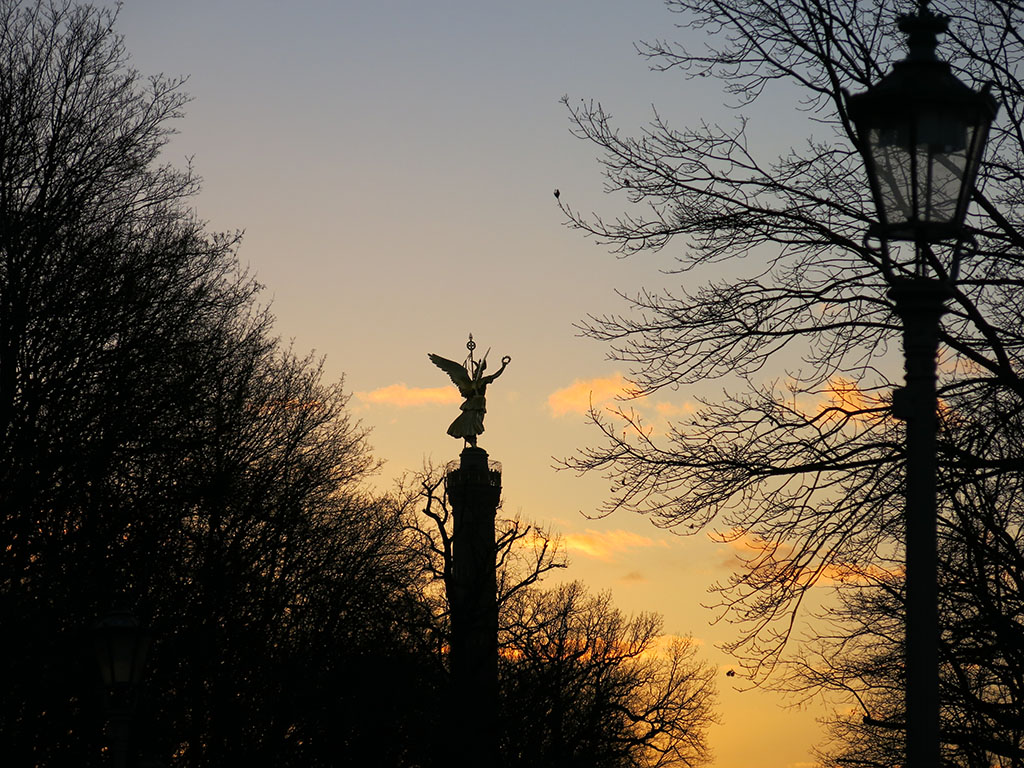 And with that, our day on the bikes came to an end. Almost 5 hours of freewheeling around Berlin was so much fun, and Walid was an excellent guide.I finally felt all the pieces of Berlin were coming together.

Kate and I were pretty tired by our day of freewheeling, so decided that we didn’t need to do too much more for the day. But we were right next to the TV tower, so we thought now would be a good chance to head up and gaze out over Berlin as the sun was fading. We had a better idea of the layout of the city, so once we oriented ourselves we could spy all the different landmarks. 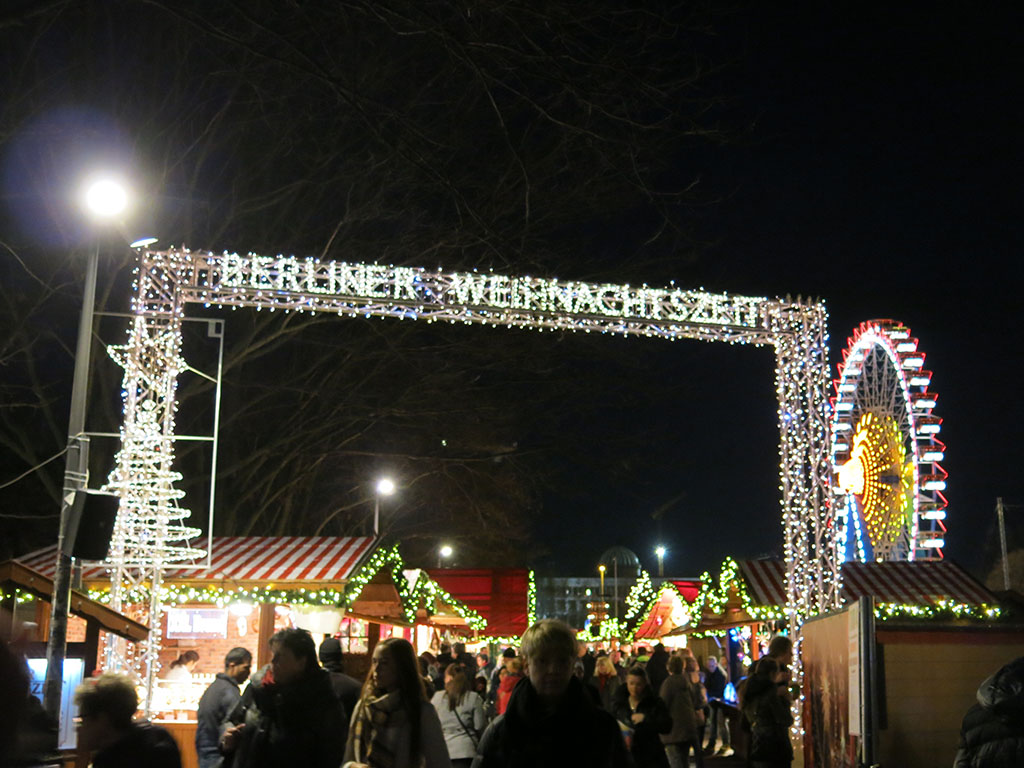 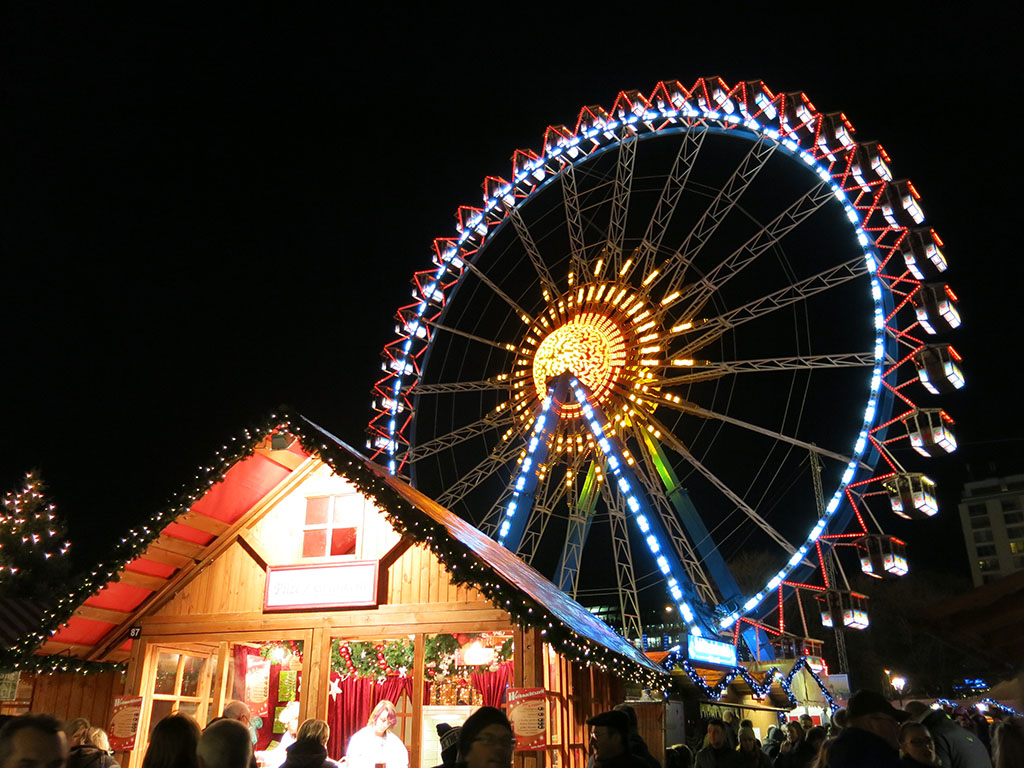 Were we done yet? Well, since we were next to a couple of Christmas markets, how could we not pop in for a bit?! 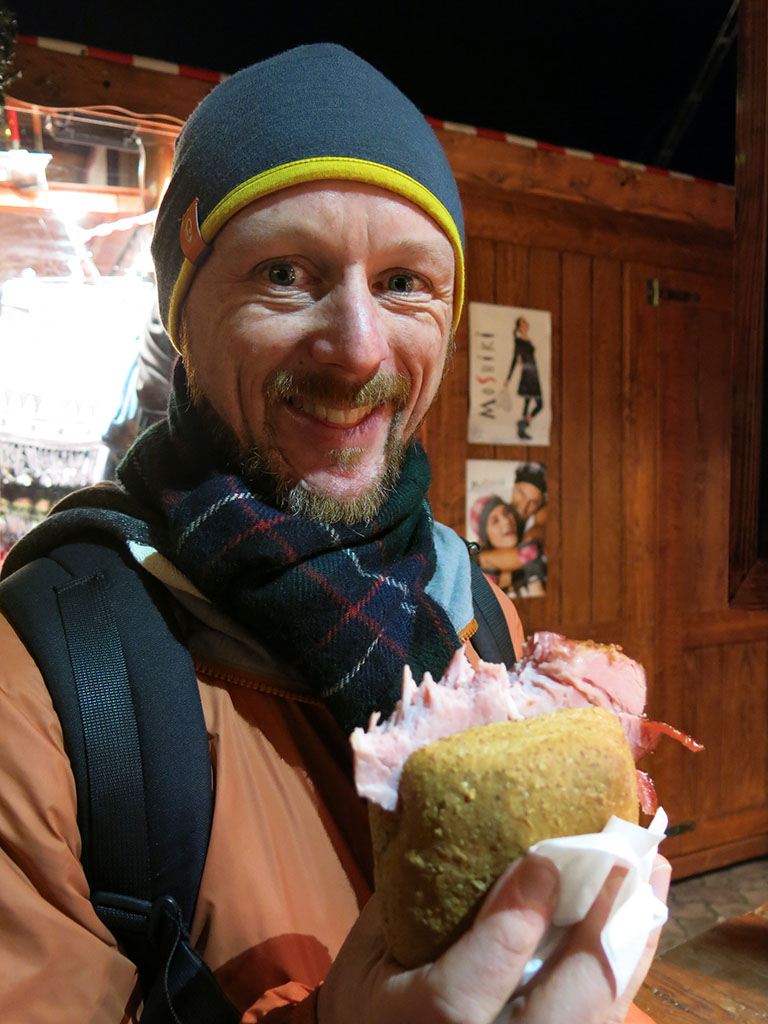 Rather than another bratwurst I opted for a tasty roast pork roll. I could eat at these markets for ever.

With full bellies, we wandered back past the TV tower, on the S-Bahn to the hotel and a well earned nights sleep.