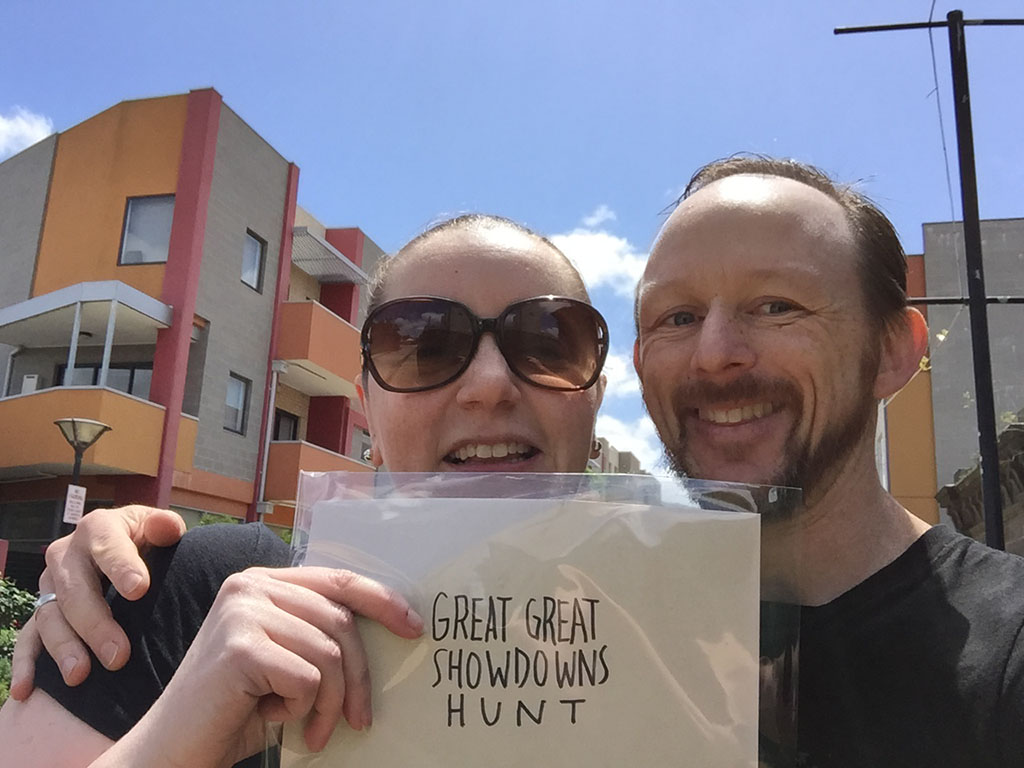 Howdy everyone on this gloriously sunny Melbourne afternoon. Kate and I just got back from a wild adventure that I thought I would share.

First of all, I love the work of Scott C. If you don’t know Scott’s stuff, he is the mastermind behind the Great Showdowns series, which you can check out here: Scott’s Awesome Showdowns

As you can see, they are just the darn cutest and coolest paintings out there. I am super lucky to have the original of one of my favourite movies, Repo Man, that I got from one of his Gallery 1988 shows… I couldn’t believe no one had picked it up when the remainder when on sale online. Winner me!

Anyway, recently he has been doing a very cool series of treasure hunts, painting variations of his trademark showdowns, and hiding them in famous movie locations. So far they have pretty much been all in the US. But recently this changed. The #GreatShowdownsHunt became the #GreatGreatShowdownsHunt! Yep! It was now a worldwide event!

It was cool to watch the first few days from afar, Scott and his co-conspirators tweeting clues and people madly seeking them out. So many of my favourite films… Scott Pilgrim, Royal Tenenbaums, Vertigo… just so cool. And then he tweeted what I could only have dreamt of… “Amazing work, gang! Day 5 comes to a close. Day 6 starts at noon Australian time! In Sydney, Melbourne, and Tokyo!”.

I madly tried to think of what movie it would be. The films shot in Melbourne that I thought were a strong chance were Where The Wild Things Are and Mad Max. Two near to Scott’s heart I knew too. But there were always the wildcards of other minor films that had a cult following. Hhhmmm. My bet was on those first two.

So Kate and I had some errands to run. I told Kate all about the hunt and that I would love to be heading toward the city around noon, when the clues were scheduled to drop. She was up for some detective work, so it was a plan.

We were in the car getting close to the CBD when noon hit and Kate exclaimed “it’s up!”. The movie? Chopper! I had not picked that one! A picture of the painting was up, along with the following clue: 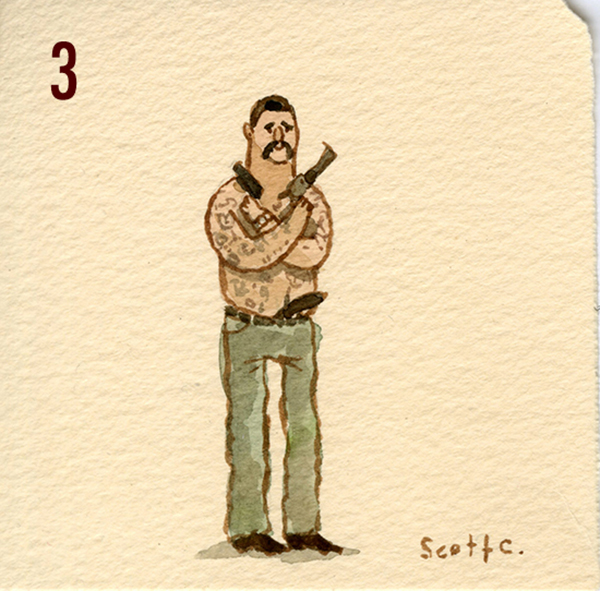 “This is a story of a very tough, wise cracking criminal.  At one point, he had a buddy cut off his ears, so he can be transferred to another area of the prison! He does some crazy things in his life and decides to write a book about it.  He becomes famous because of this book.  What jail was this guy being tough in?”

Pentridge Prison! In Coburg! It was not either of the two I thought. Hhmmm… we were probably about 20 minutes away. “Should we go?” I asked Kate. With only a seconds thought, she said “Yep, lets go!”. So off we went up Punt Road towards the site of the former Pentridge Prison.

For those of you unfamiliar, this was a hard-ass prison that was shut down a while ago and was in the process of being turned into a housing estate. This was not a small diner or specific location… this was going to involve some walking, as the prison is in a state of being torn down and turned into the estate. But I knew key parts of the prison still stood and were likely to be the home of this little treasure.

Thanks to some fairly light traffic, we arrived probably 25 minutes into the hunt. Twitter was not telling us it had been found, with Kate keeping constant eye on it the whole way. We were now officially in the chase!

We started at one of the main parts that looked like the old prison but was now a hip cafe. Peering in all the nooks and crannies and windows and doorways we were not finding anything. So we kept making our way around the old prison walls (or at least the ones left). We hit what used to be the main entrance. It has to be here we thought! But alas, nope.

For the next half an hour we wandered around, always keeping an eye on Twitter. Still nothing. We suspected another couple of folk wandering were in the hunt, and it wasn’t until a tweet to Scott, and bumping into her numerous times that we spoke of our adventure. Indeed she was on the lookout as well… competition!

Scott tweeted a hint… “Alright, Melbourne. Here’s a hint. It’s behind bars! Actual bars.”. This was something to go with! We checked all windows and doors again but nothing.

Over an hour had passed since the kick off and still empty handed. Kate and I jumped back in the car to drive around the site, looking for places we hadn’t visited. Nothing. Hhhmmm. Had it been found and not reported? 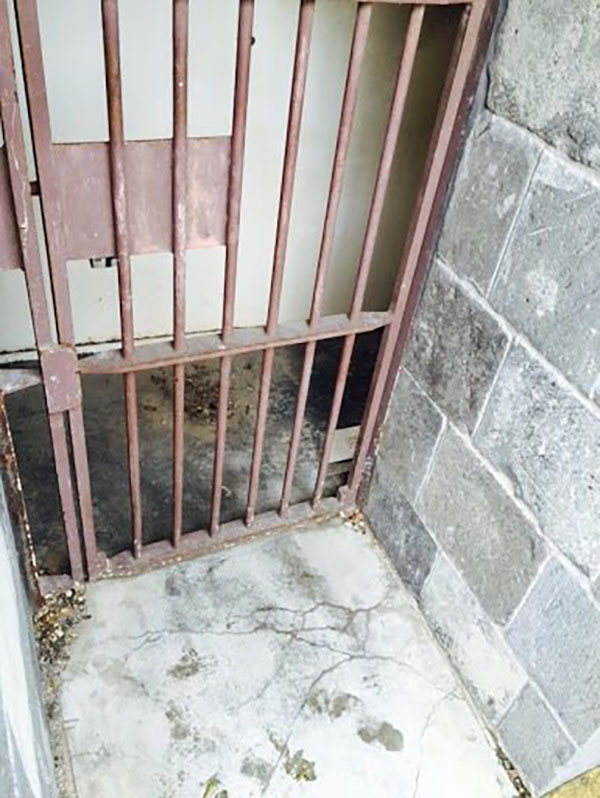 In order to rethink our strategy, and get some sustenance, we wandered into the cafe we started at for some lunch. We had just sat down when a tweet from Scott came through. It was a picture of where it was! “What should we do?” I asked Kate. “Should we stay or go look?”. “Let’s go look” was her answer, so we were off again! Our only competition was nearby so wanting it found, I shared the pic with her. So off we went. Conveniently, the doorway was actually just near the cafe and we recognised it as we walked past. We had looked there already. Hhhmmm. But we were 100% sure it was the doorway! Had it been taken already?

I did some fishing around with my arm, but nothing. Then Kate had the genius idea. The one that she has the right to brag about forever. “Get your camera on your phone and look around the side of the door we can’t see.” Holy cow that is genius! So I got the phone out and looked…

Woah! We were excited! We tried reaching through the bars but could not reach it. Clearly a breeze had blown it out of sight. What to do, what to do. We grabbed a nearby stick, and given Kate’s arms were a little longer, she did some fishing and… YES! She knocked it in plain sight!

She was having some trouble, so I grabbed the stick and easy… easy… YES YES! It was ours! We won the Melbourne showdown! 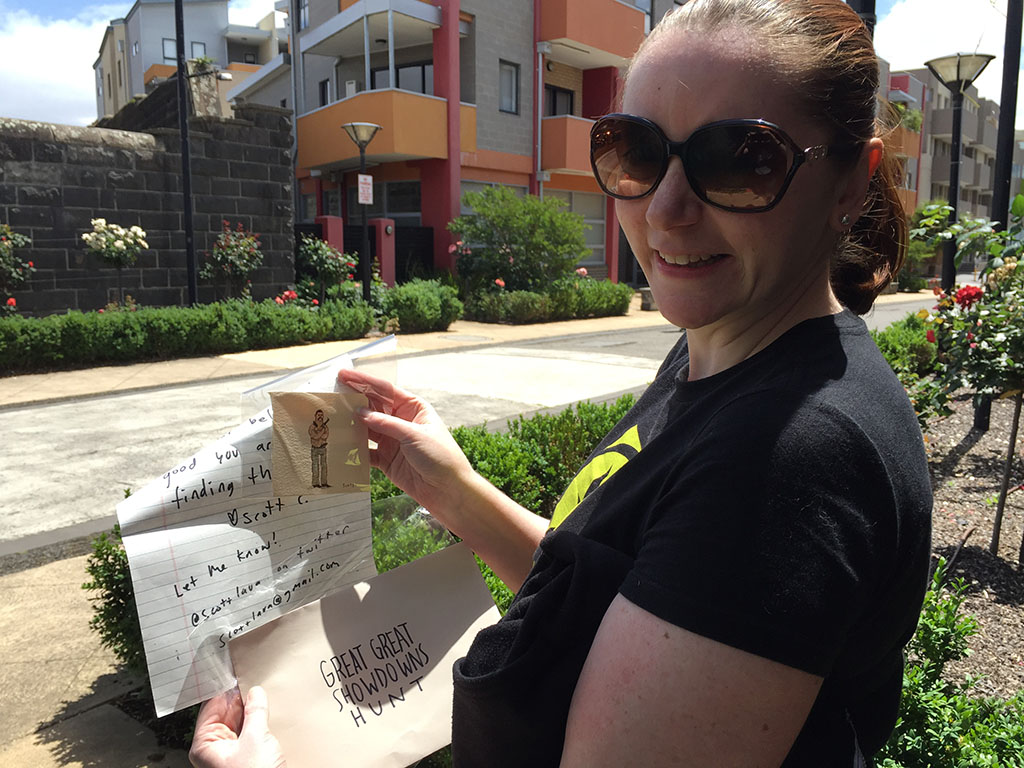 Straight away we tweeted to Scott to let him know our success. We were SO excited. What started as a crazy idea turned into the best fun, and with a new Scott C original to show for it. And a Melbourne one to boot.

We were so buzzing. We were high fiving and fist bumping like there was no tomorrow. To settle we decided to head back to the cafe that we rudely ran out of and have some lunch. The spoils of victory! 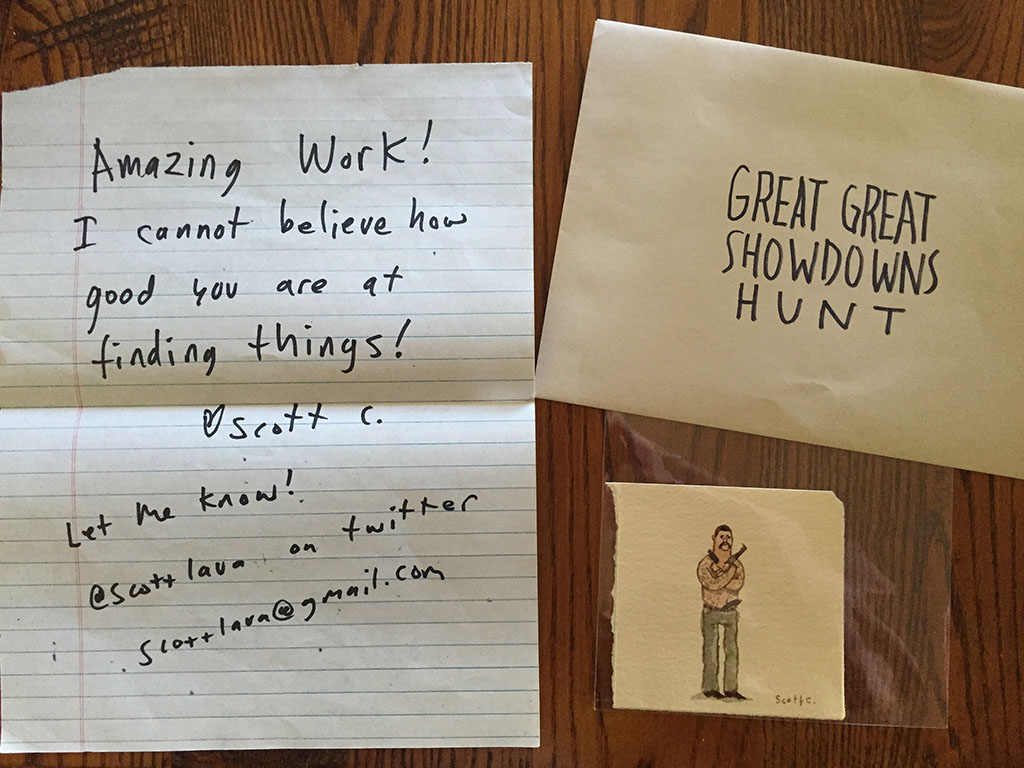 Our awesome prize from Scott

So that is our crazy adventure. What started as a “should we? shouldn’t we?” we were so glad we said, yep let’s go on a great showdown hunt. Hope you enjoyed the story everyone.

We need to finish with a HUGE thanks to the great man Scott C (@scottlava on Twitter) for making it possible and thinking of us fans all around the world. He truly is rad. Thanks man!