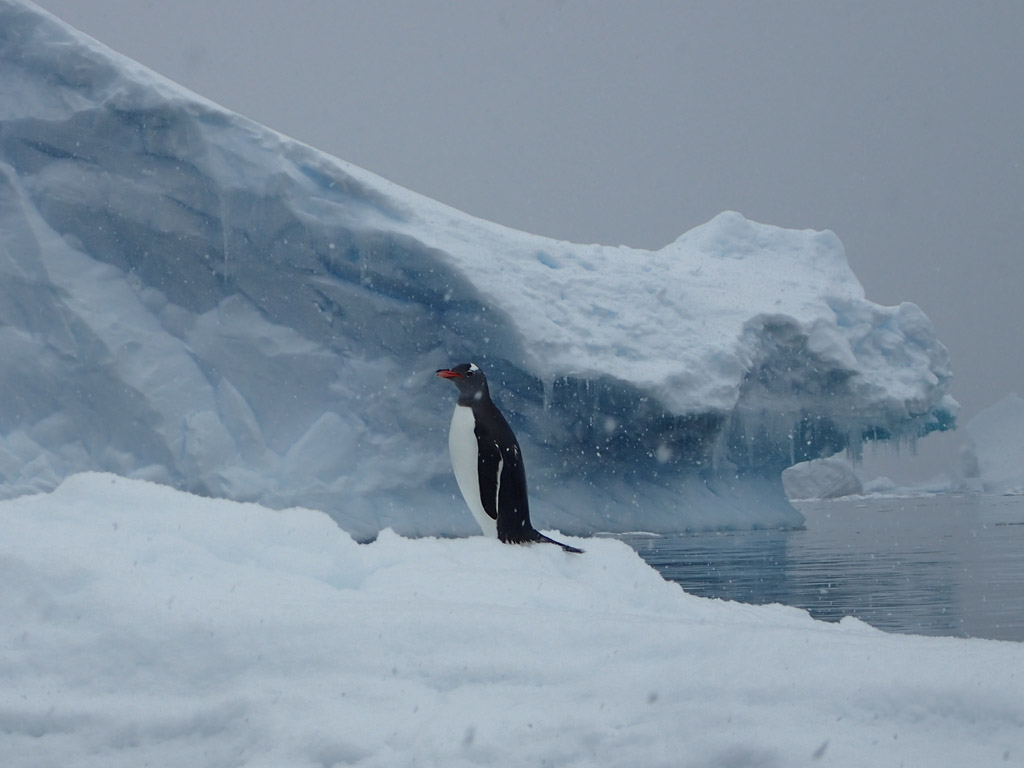 Boxing Day greeted us nice and early. Typical breakfast time has been 7:30-8:00, but this morning we were entering the Lemaire Channel at about 7:00am and we were advised that if we wanted to see some spectacular fjords, it would be wise to be up by then. 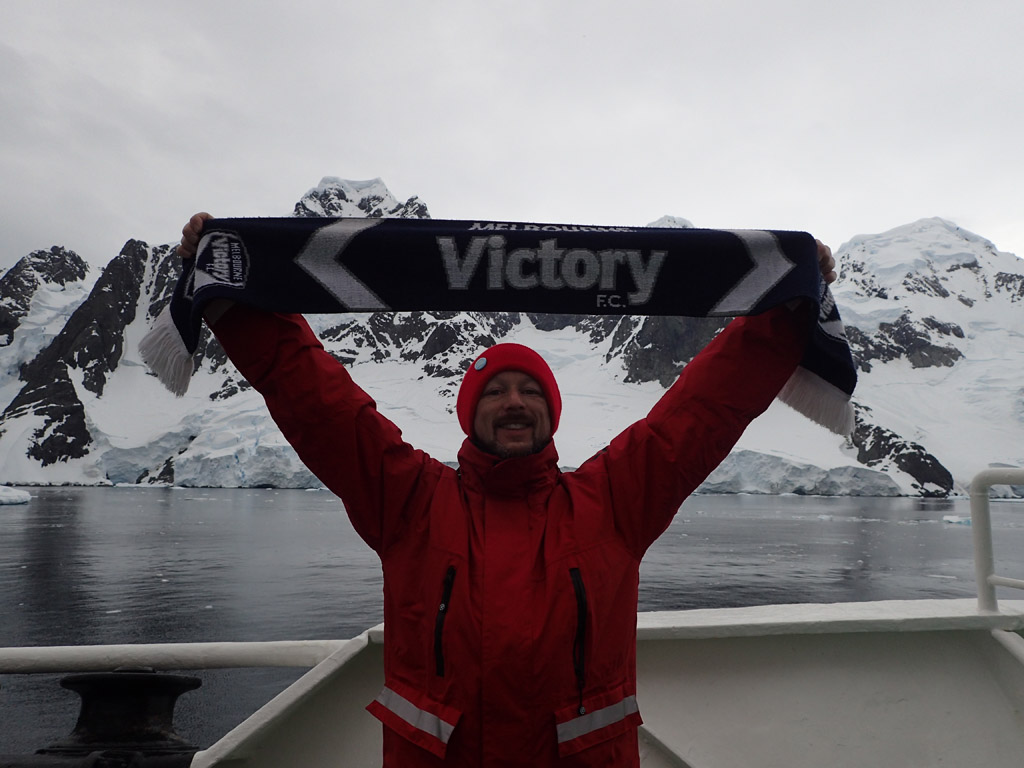 there’s only one team in antarctica

So at about 6:45am Kate and I headed to the front deck to soak it in. As expected we were greeted with an incredible view. Not only was it that the sheer steepness of the sides of the channel were a wonder to behold, but also that looking up ahead toward the end of the 11km long passage, it looked like a VERY narrow exit.

We were actually advised the night before in our daily briefing that while the intention was to pass through the whole Lemaire Channel, it was a strong possibility that we would get some of the way in and find ice blocking our path and have to literally turn around and go another route. Looking down at the exit all I could see was ice. Hhhmmm.

At about 8:15 we arrived at the narrowest passage, and what would you know… we could make it through. In fact it was the first time this boat had made it through this season, so we were quite fortunate. It was touch and go there for a bit. But the ice made for spectacular drama.

Just the other side of the channel we made it to Pleneau Island. The weather was a bit grey and the snow had settled in well and truly. Rather than be a dampener, it made for quite a dramatic landscape. We had the option to kayak here, which I took on, but Kate decided to give a miss. But I didn’t want to miss this one, as we would be kayaking in what is known as the Iceberg Cemetary… an area where due to waters and currents, many many icebergs end up drifting. So we would have the chance to kayak amongst these. “More icebergs?” you ask. Yep, no two icebergs are the same.

So very quickly our Kayak Master Mark had us down in the mud room getting ready. We were told this would be a bit more of an epic session, being out for about 2.5 hours. Woo hoo! I got my gear on, paired up with someone new (Wucai) and got out on the water. 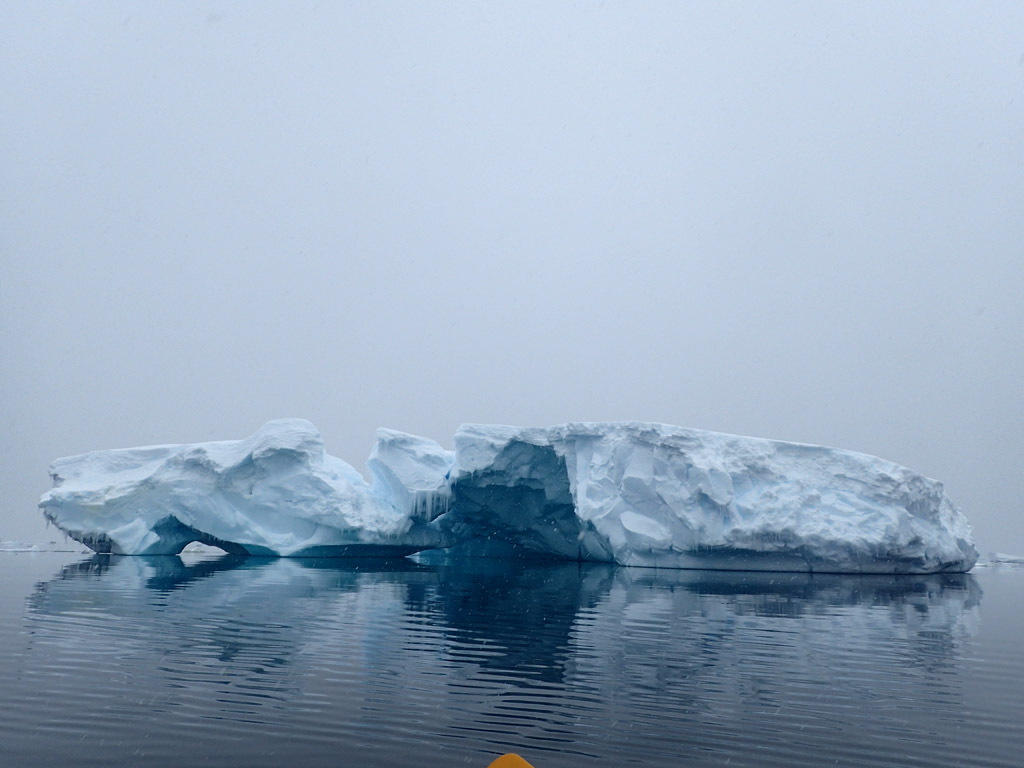 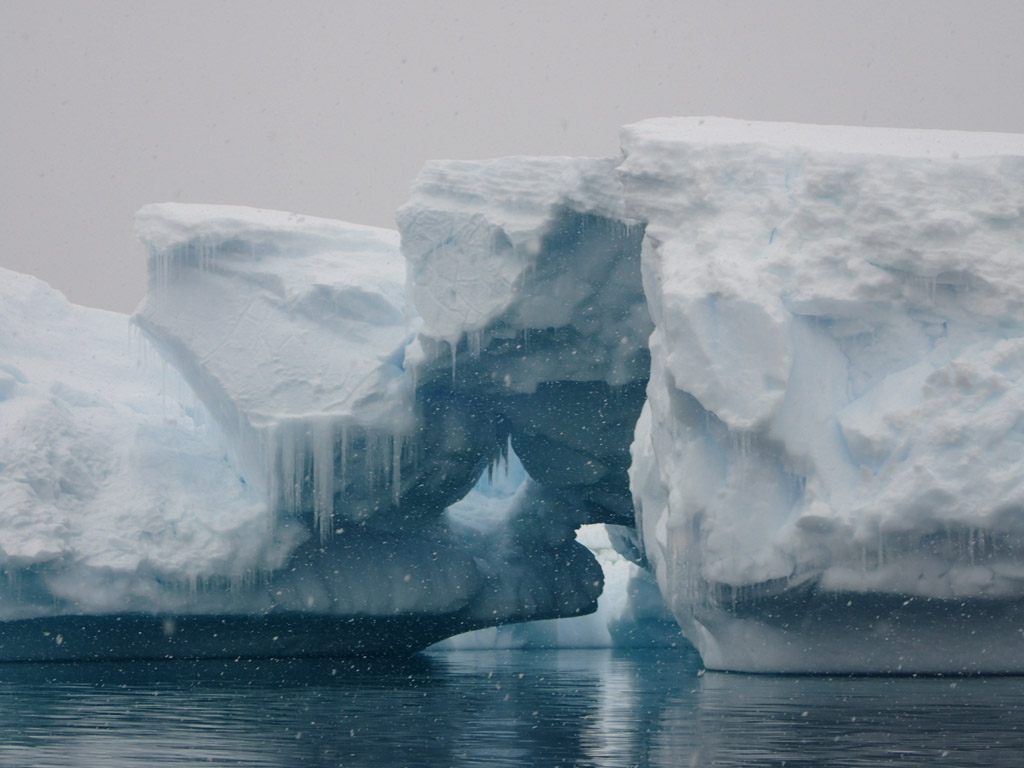 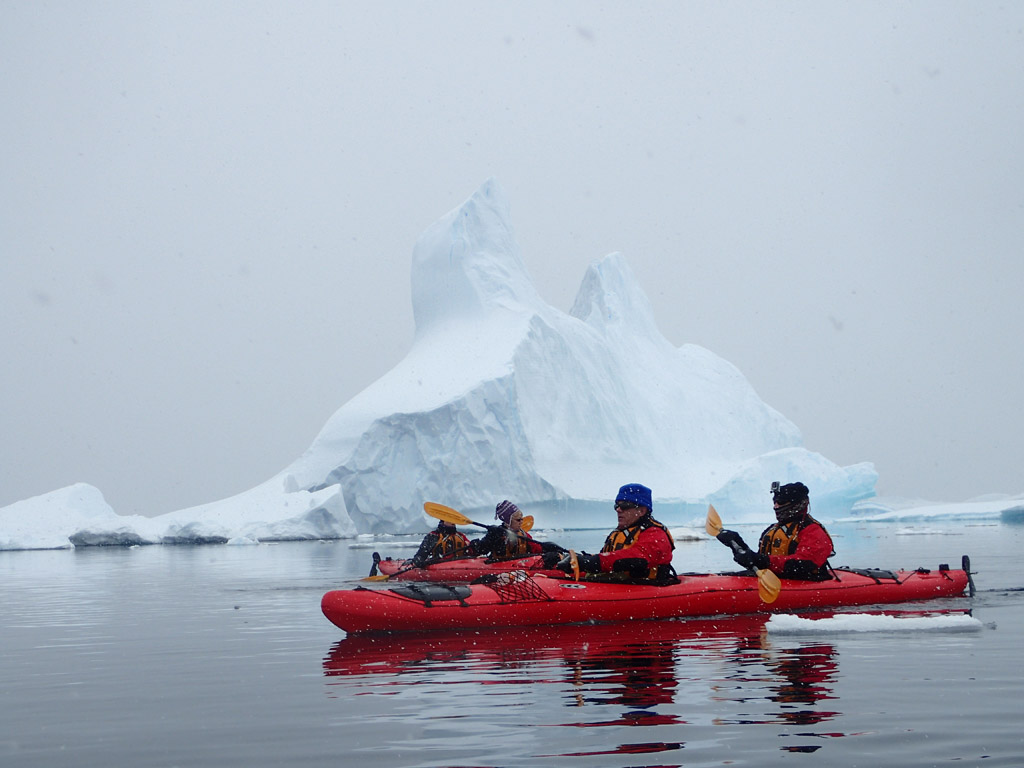 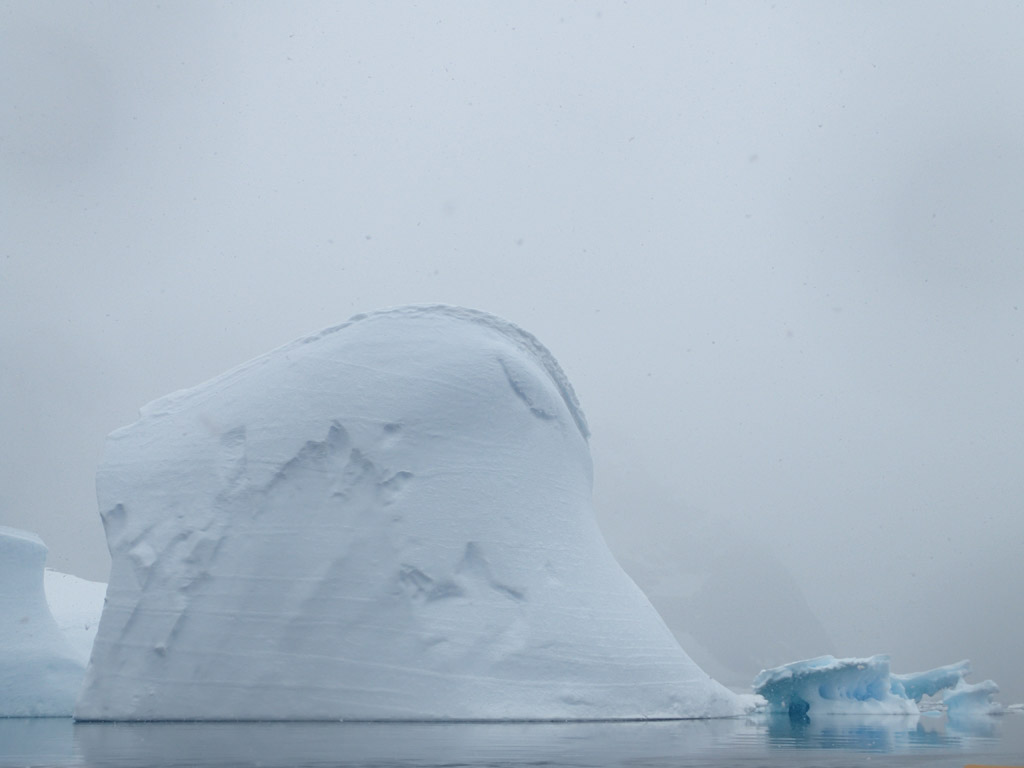 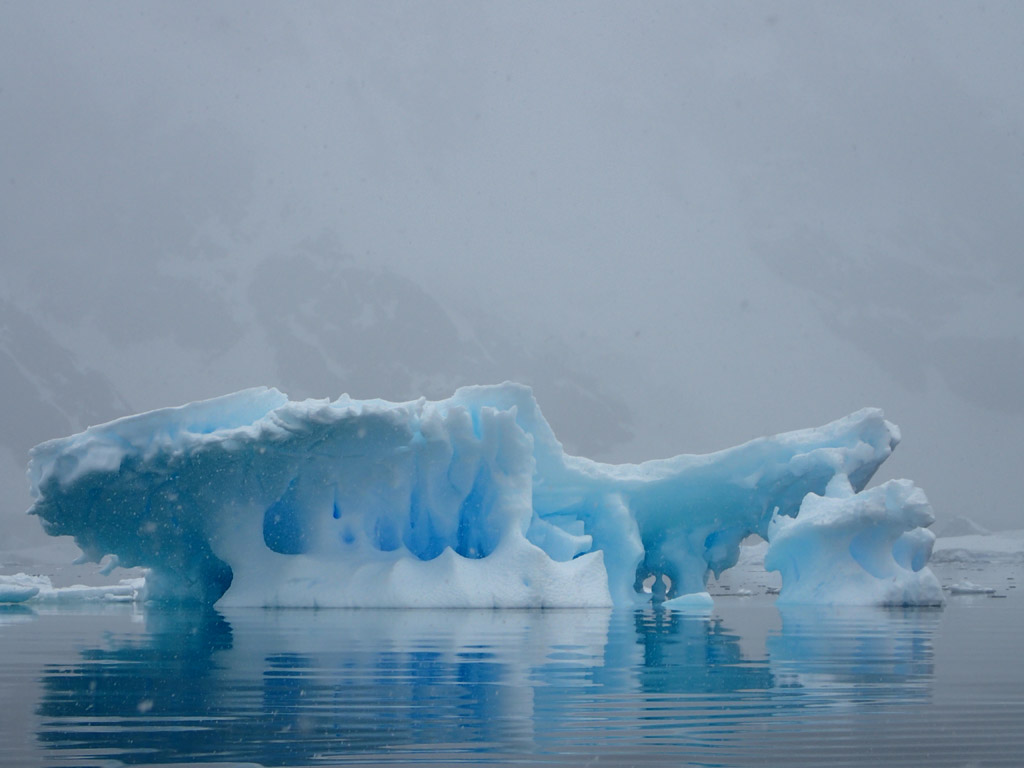 As we got out amongst the icebergs I just couldn’t believe it. It was possibly the most stunning landscape I had ever seen and been in. The grey skies and snows made for an incredible sight. It was haunting to see all the icebergs floating about, like they had come and could not escape, seemingly now trapped forever. 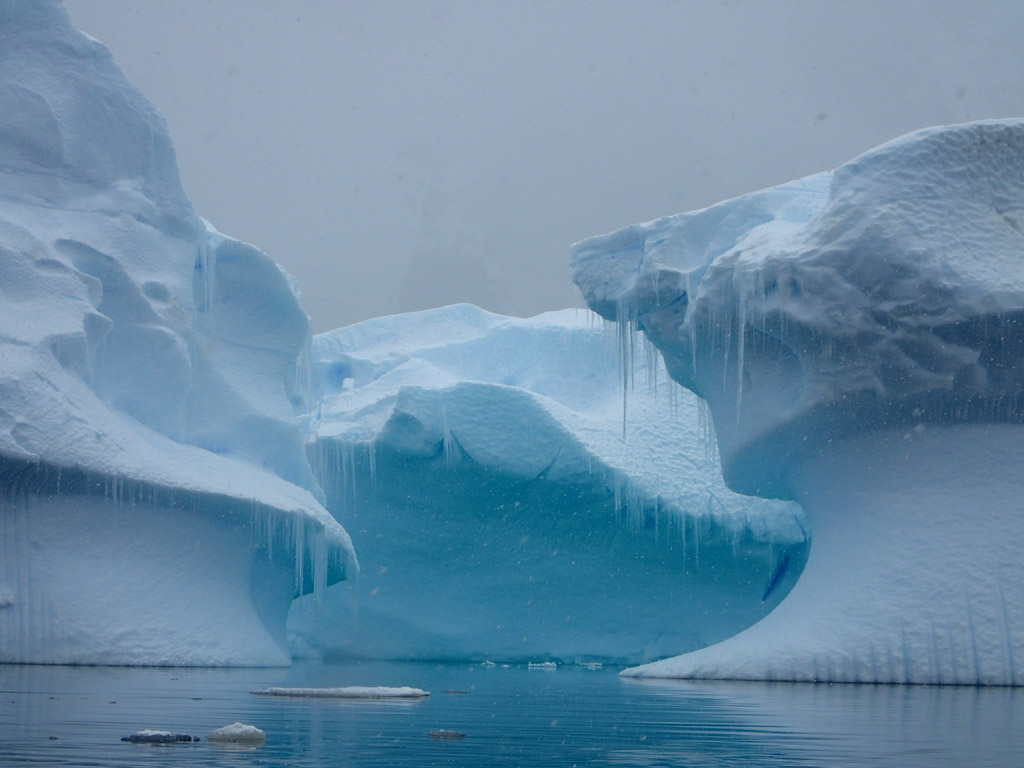 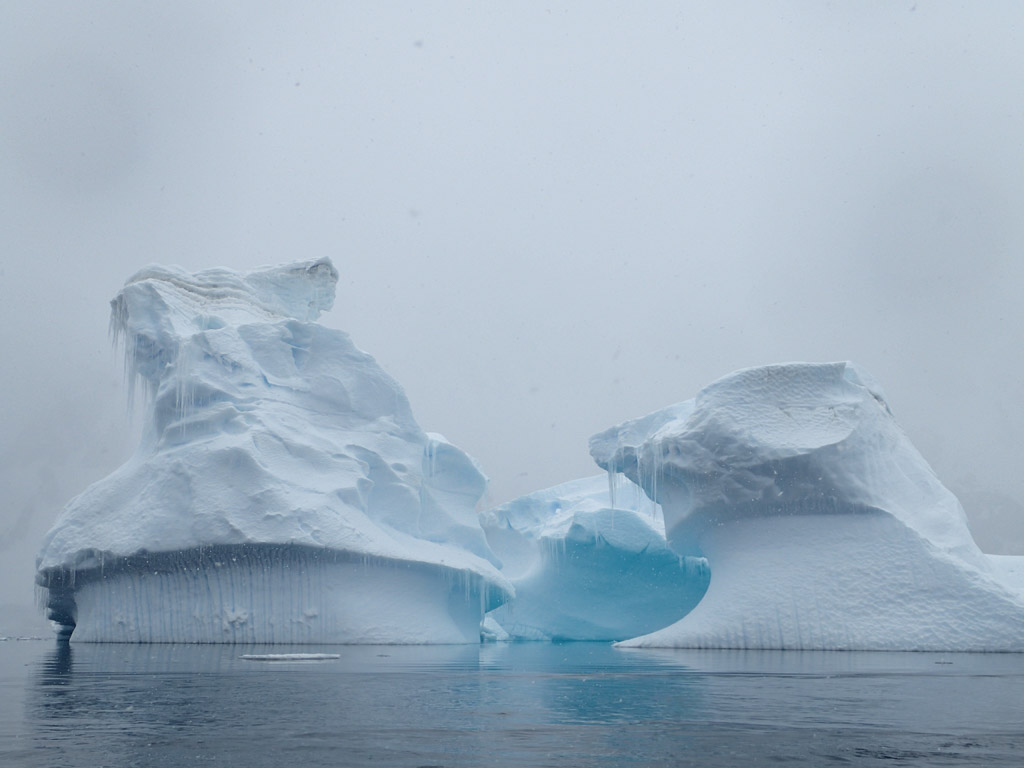 We then proceeded to kayak for the next couple of hours. I gasped every minute at some amazing iceberg, whether it was the colours or the shapes. The light snow falling started to collect on them, giving them an extra dimension. But it was the many different blues that took the breath away. 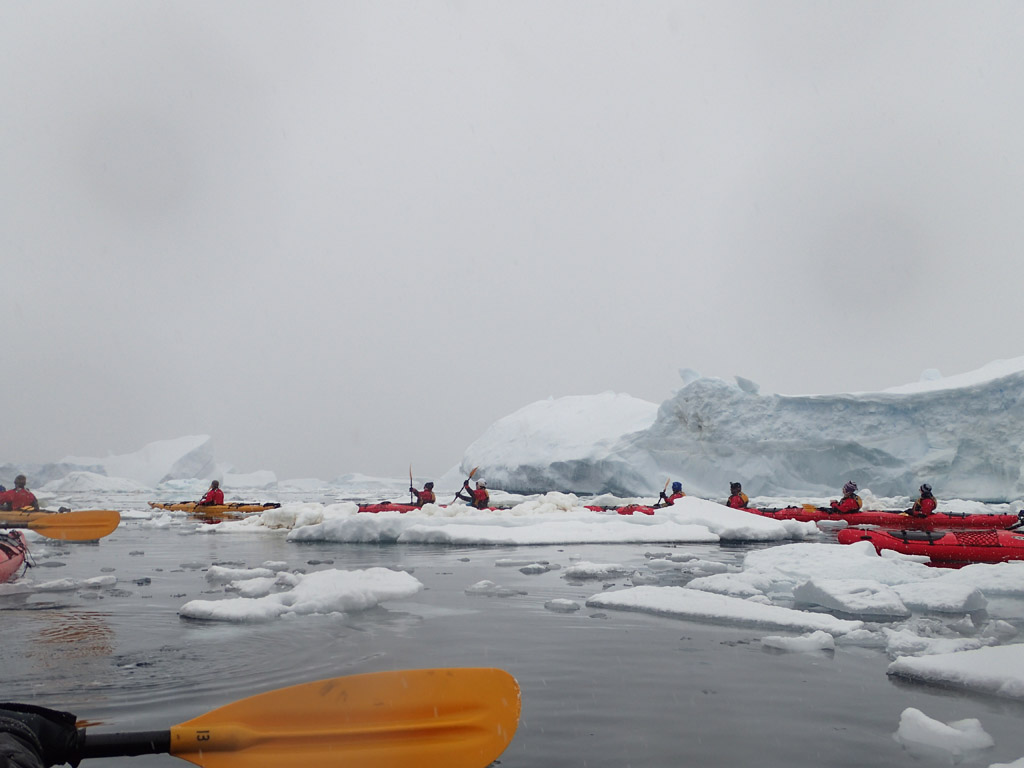 The other highlights of this kayak were the chance to kayak amongst a lot of ice and try to negotiate lots of tiny gaps, putting our skills to the test. It was nice to just plow through some ice, and also work out what bits you just didn’t want to mess with. 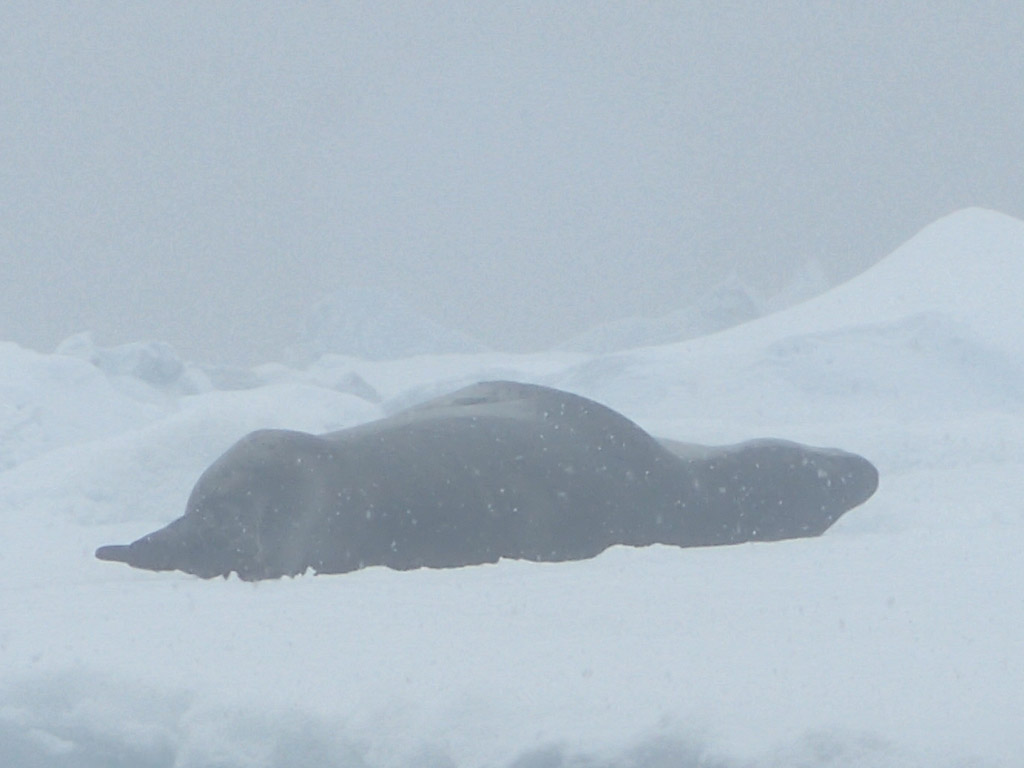 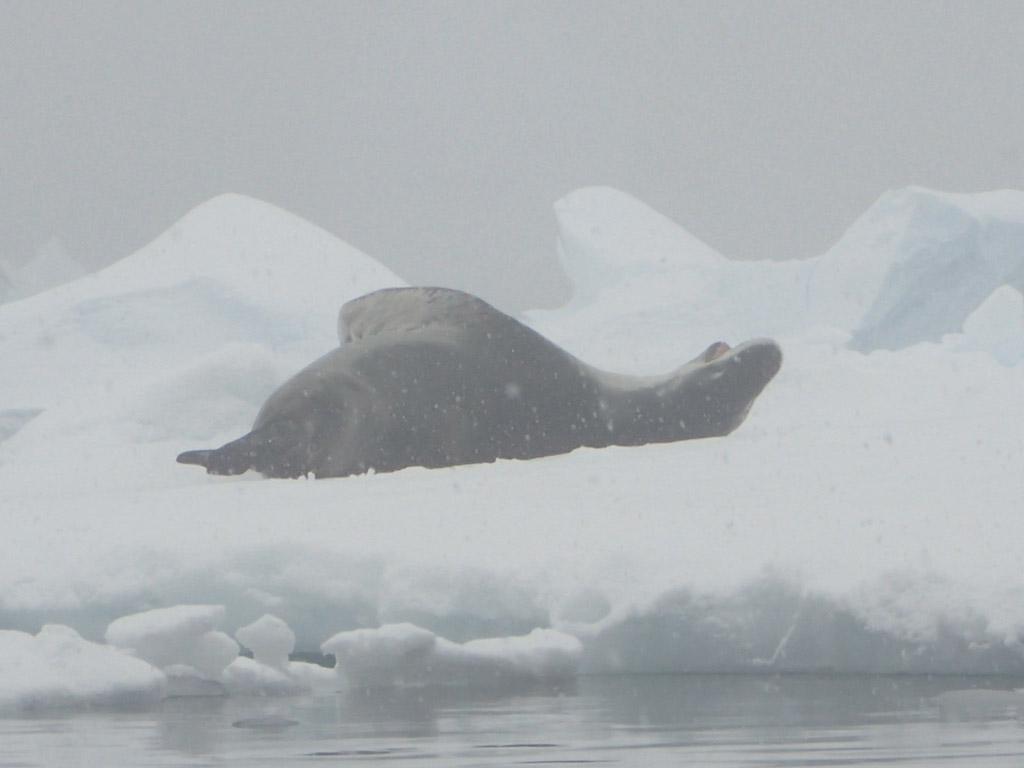 During our time we saw lots more penguins, but this time we got up close and personal with the king of the seals, the Leopard Seal. These dudes are BIG. We didn’t get too close as if he wanted to come and check us out who knows what would have happened, but we got close enough to see his huge jaws. So awesome.

The time disappeared in the blink of an eye and we were back at the ship all covered in snow. You may think I was disappointed the weather was lousy, but in reality it was lousy only in forecast. In actuality it was incredible and gave the graveyard an added sense of melancholy. As I said, quite possibly the most amazing place I have ever been in my life.

Lunch was lots of tales of the others riding in zodiacs, some who came across the leopard seal and others who missed out. In no time at all the boat arrived at its next destination, Petermann Island, and again the kayakers were called to another briefing. Petermann Island is quite small, so this time the plan was to circumnavigate the island and then make it back to the ship to get to spend a brief bit of tie ashore. Oh yeah, double header! 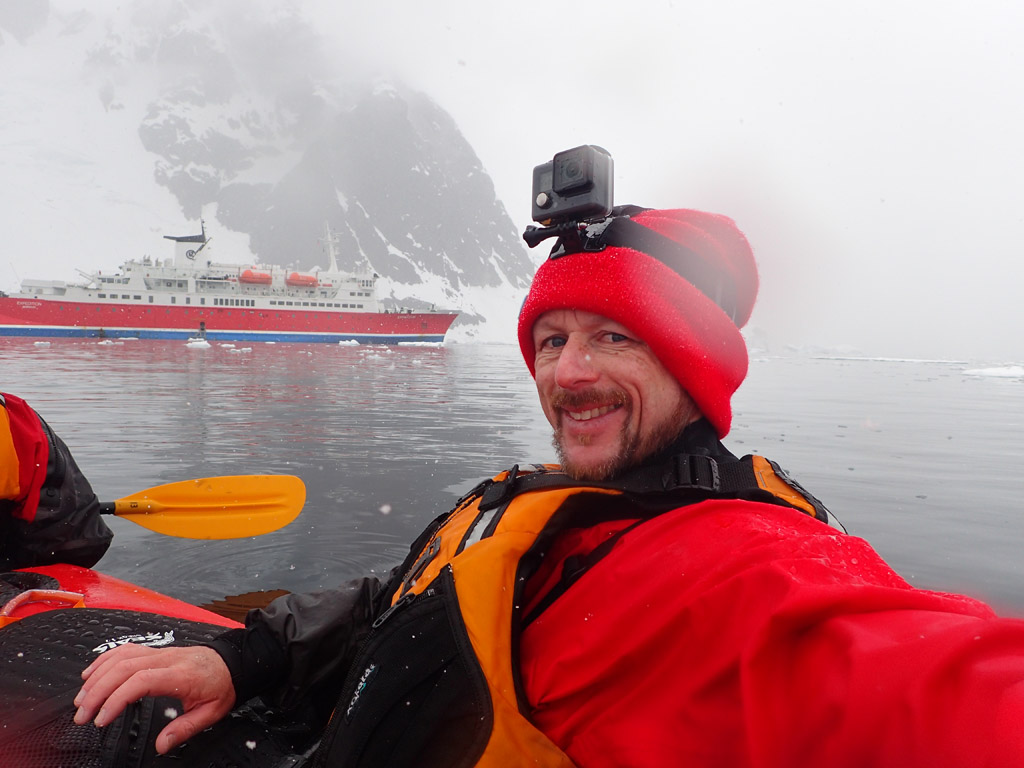 Kate was giving this one a miss as well, so I was back in with Wucai, and in the water. The sights to see here were the usual… penguins, maybe seals, lots of icebergs. But a bit like earlier, the main thing here was to get to kayak in even more ice. The weather was still snowy, so icebergs were covered in 6 inches of snow and the water was almost thick, adding a new dimension to the kayaking. Without wasting much time we were all off and heading around the island. 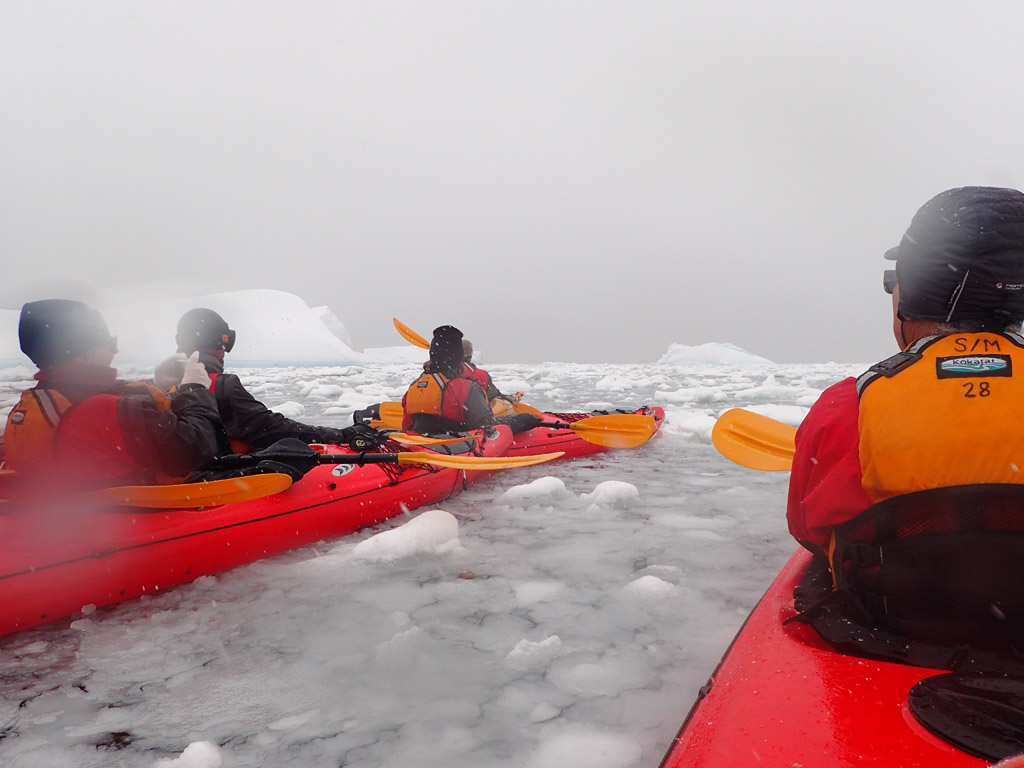 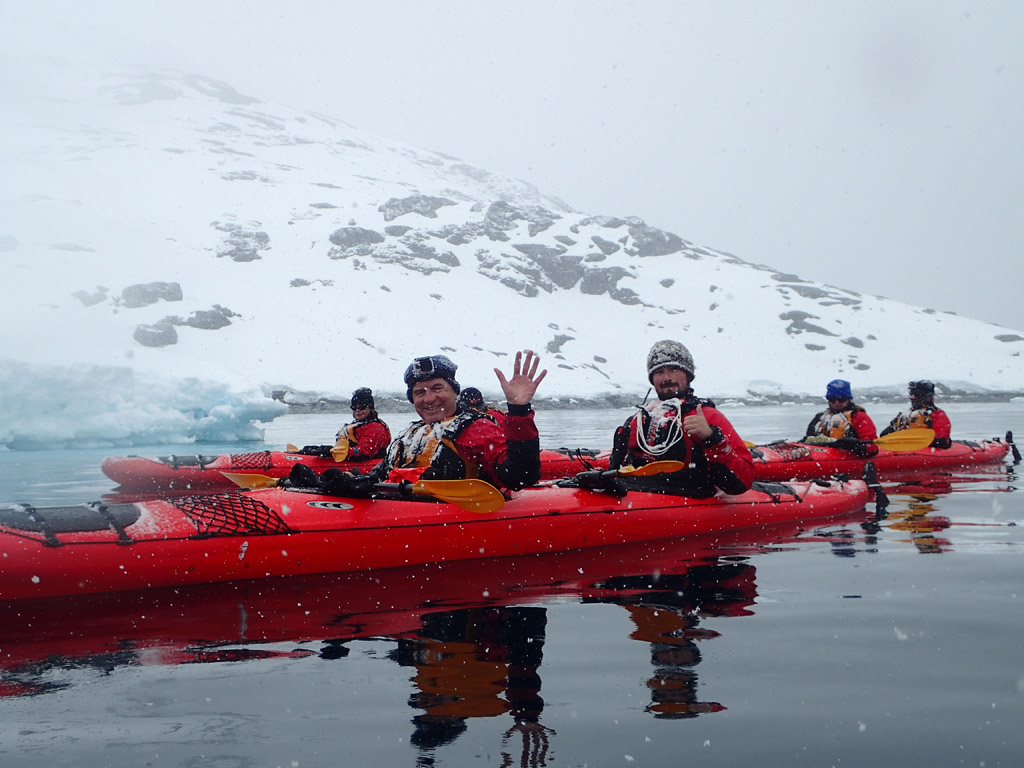 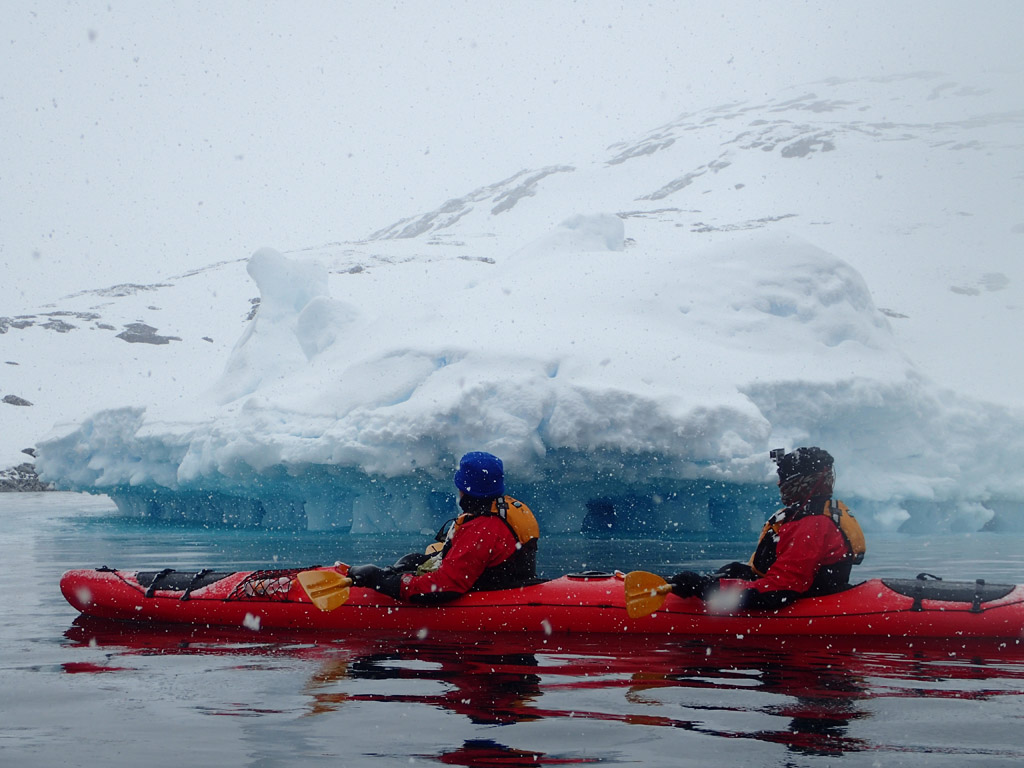 Highlights of this session were the constant navigation through the ice which was great fun. At first you worry about tipping your kayak but soon realise that it would take quite a big chunk of ice hit very rapidly to do it, so we all had confidence.

This was probably the most difficult session yet, as we had not only weather but currents to deal with as well. The water was calm for the most part, but we had to expend a bit more energy. 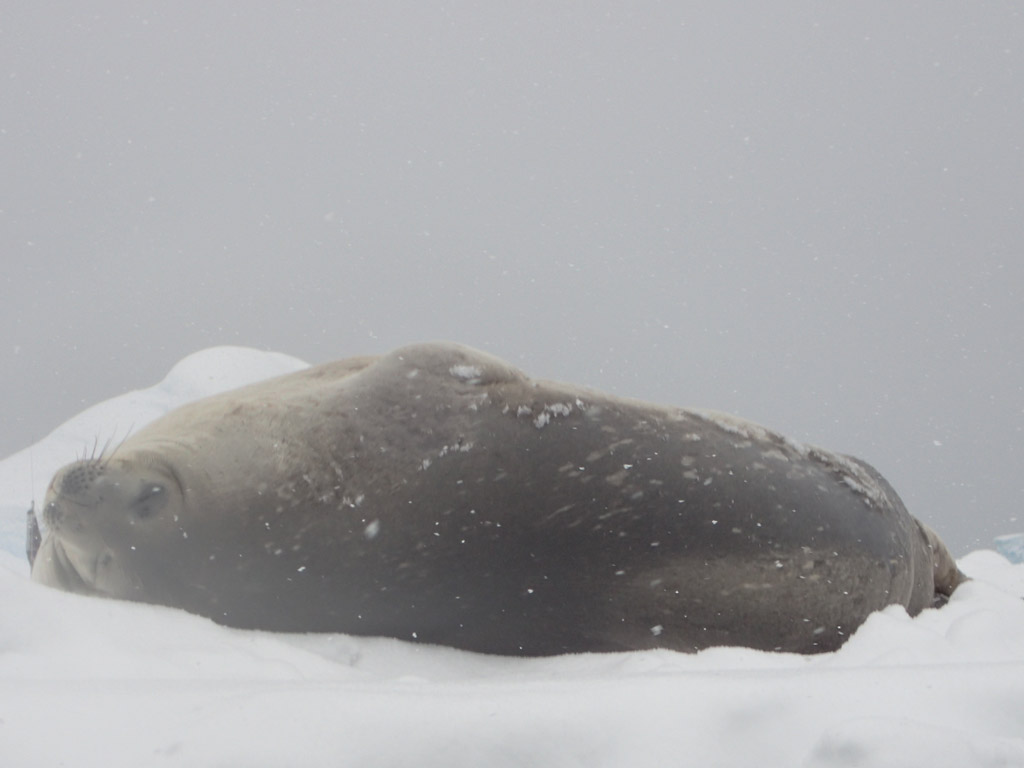 Along with all the penguins swimming amongst us, and the glorious icebergs, we came across a Weddell Seal hanging out on a small iceberg, which our guides let us get nice and close to. I don’t think you can get tired to seeing those dudes lying there all relaxed.

Again, over 2 hours went by without realising and we could sight the boat. So we headed straight back in, took 5 minutes to get out of our gear, and jumped on the next zodiac to the shore of Petermann Island. We wouldn’t have much time, but at least we could set foot on shore again. 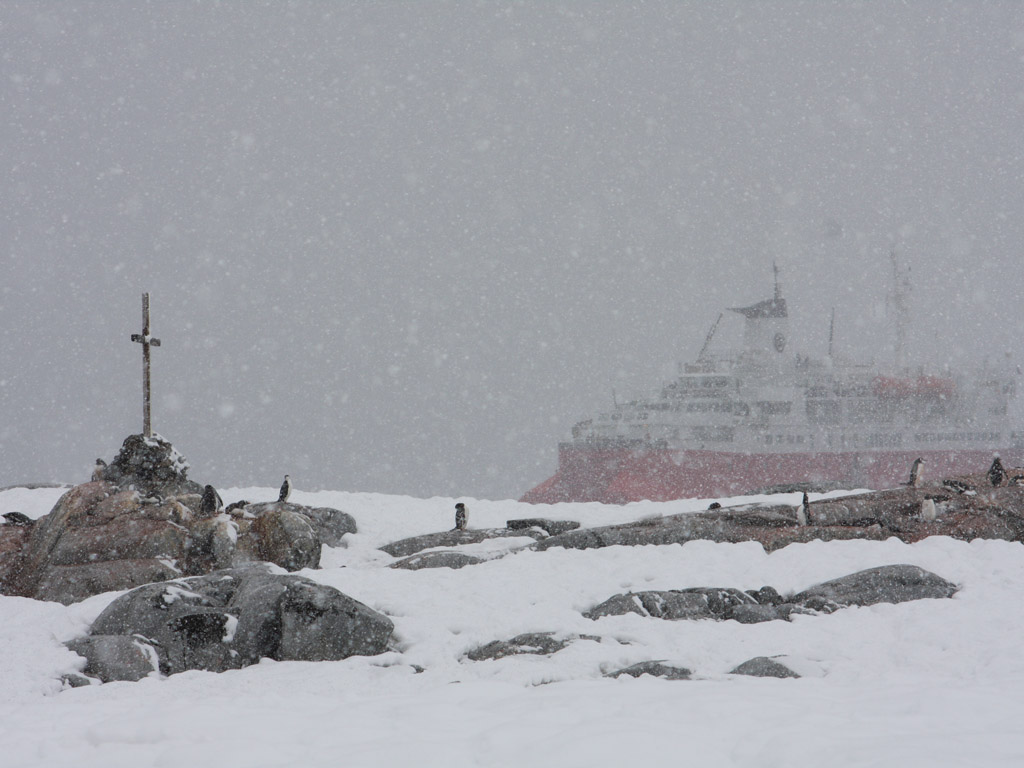 Petermann is known for colonies of both Gentoo and Adelie penguins who were happy to wander all about us. The island also housed an old Argentinian ht as well as a British memorial to 3 folks lost undertaking research in the area. Sadly we couldn’t get close to that as the penguins had made it a new home base, but the solitary cross on the coast surrounded by penguins made for a fitting tribute. 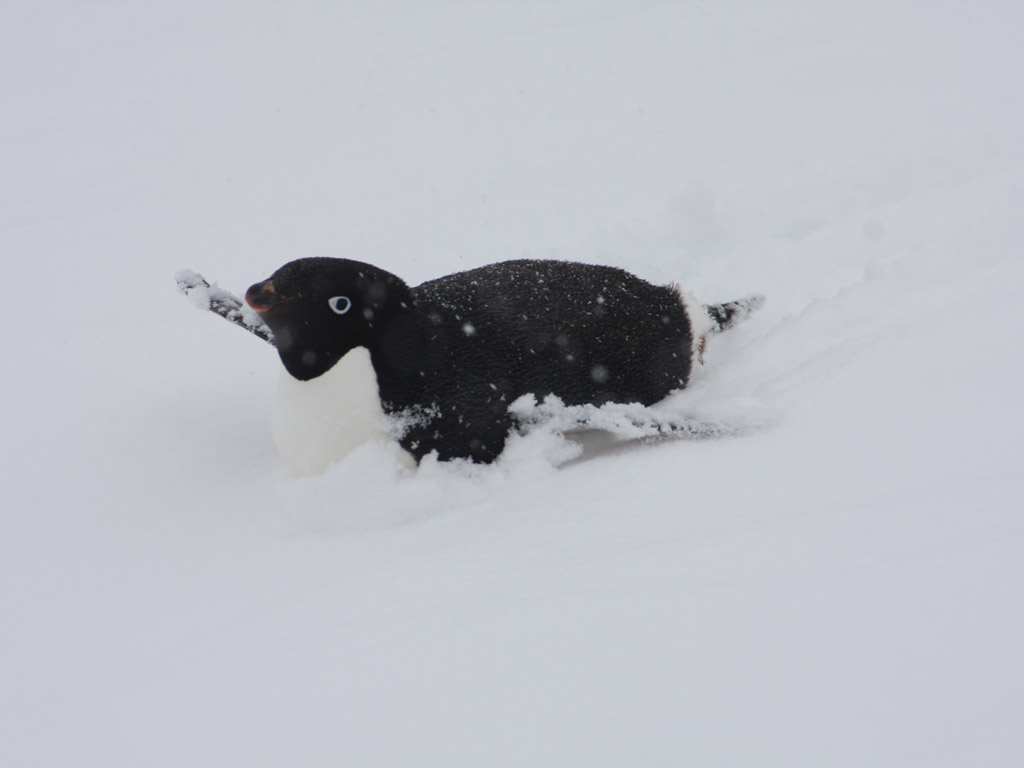 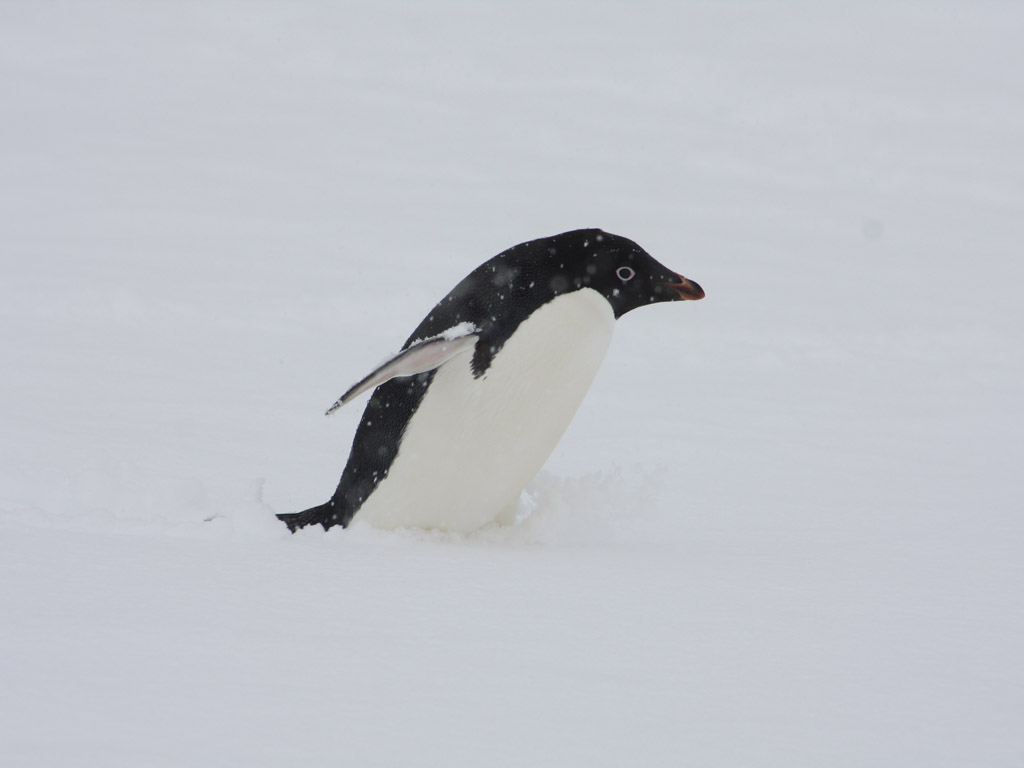 With only that much time I legged it to the Adelie penguins as they were looking after a large number of chicks. Every now and then a mum or dad would stand up offering a glimpse of the fluff balls underneath. We weren’t getting to see much though… maybe the cold was setting in. 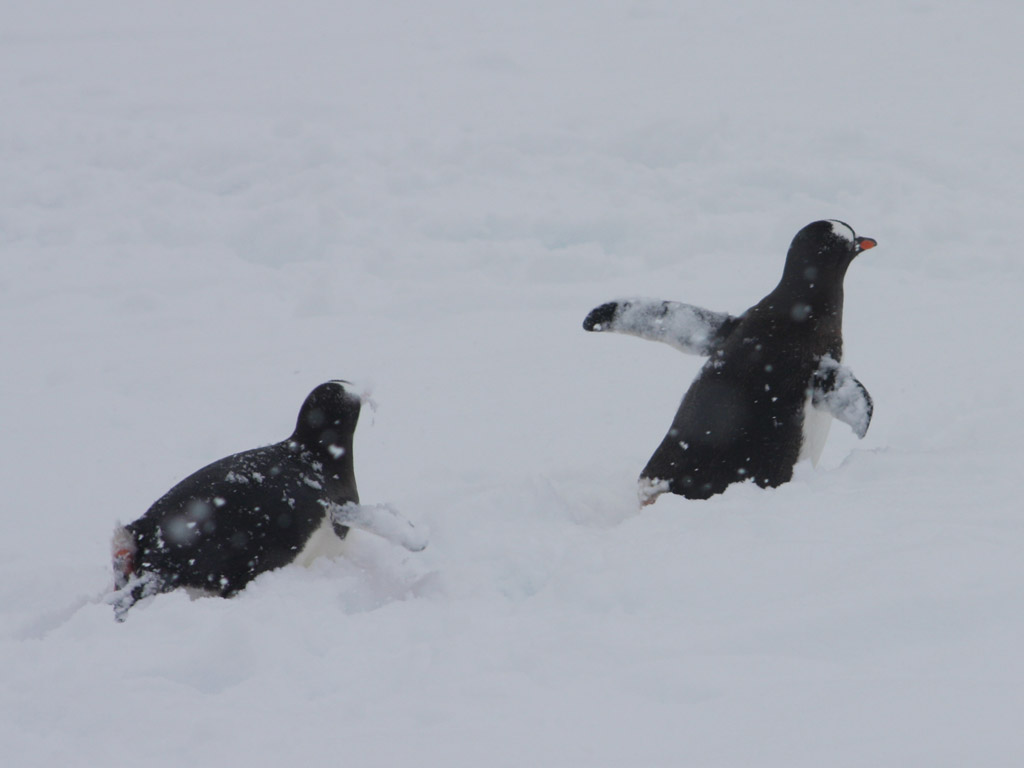 The rest of the time I literally spent following penguins close to their little penguin highways. Sometimes they would stop and be wary of us humans, other times they would simply wander across our paths. One thing I will NEVER get tired of is watching a little penguin fall on its face in the snow. It’s totally not cruel! They do it more often than not and just get straight back up. Awesome little fellas. 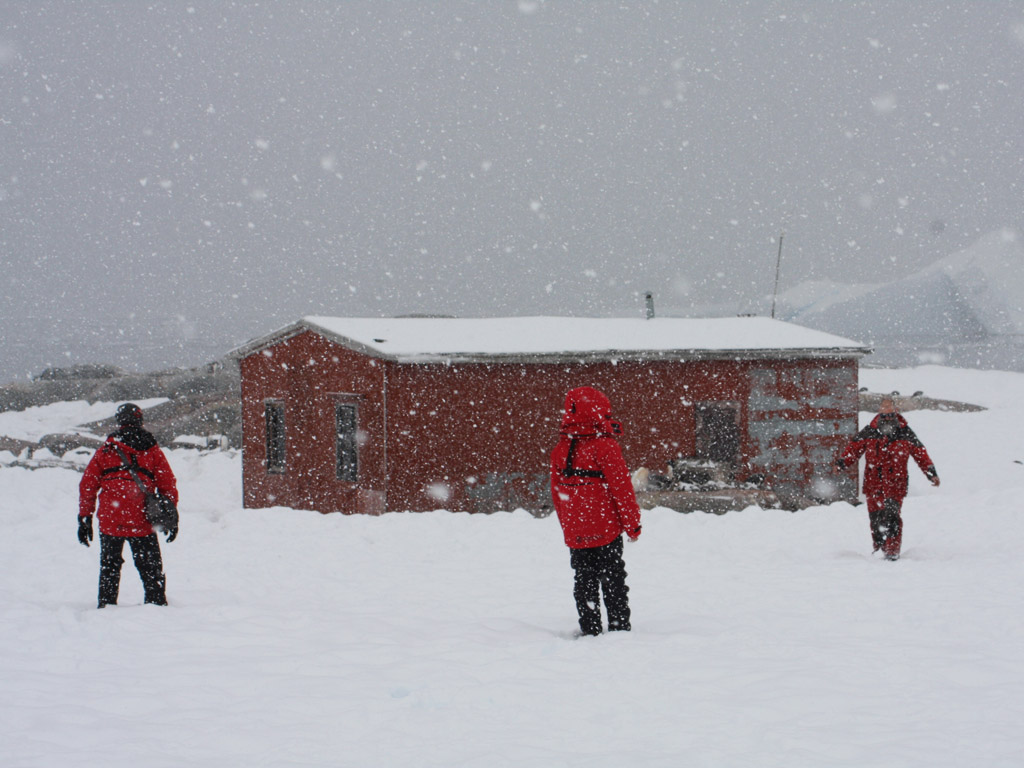 And with that I was done with Petermann Island. Covered in snow again, it was into some warm clothes and a brief break before going to the nightly debrief. During this time, John the main leader gave us the news that due to the ice there was no way we were going to make it to the Antarctic Circle. The tour we are on is actually called Quest for the Antarctic Circle, and it is its intention to reach the Antarctic Circle. But they make it clear in the literature that it does not always happen and that is why it is called the “quest”. So because it had been a huge ice season, it was just too dangerous to try.

All we were missing out on really was a day to get below the circle, one on shore activity, and then a day to get back. So it many respects I was not worried. A new plan had been devised that had the potential to be a bit more exciting anyway, but unfortunately we effectively turned around and started heading back north. Not to worry… I don’t know many people who have gone quite this far south.