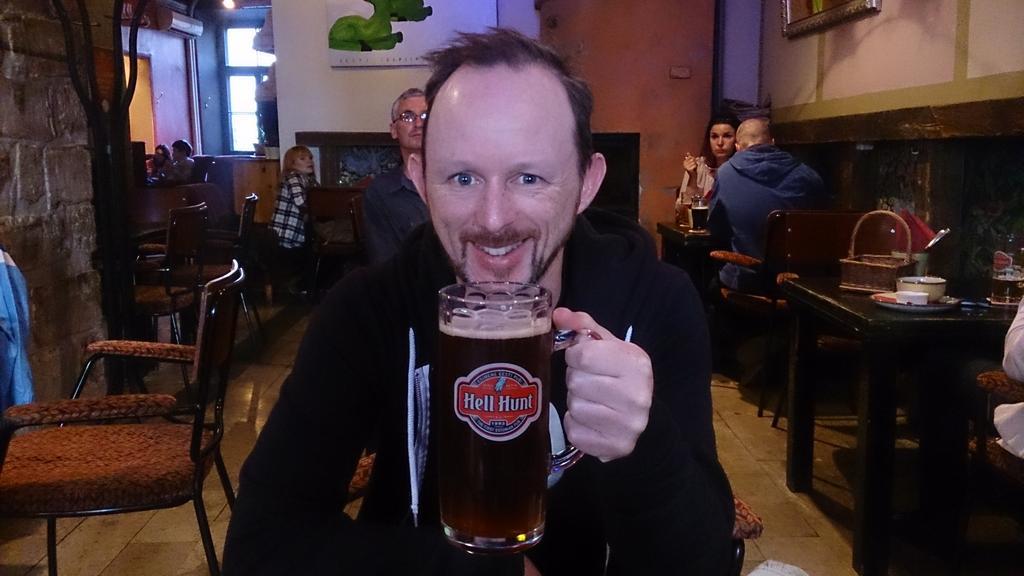 All Australians, whenever they go to Europe, lament at the ease of which our counterparts can freely visit new and different countries. We always think “man, if I lived here, I could just go anywhere for the weekend!”. The beauty about Helsinki, is there is somewhere cool you can easily visit just for the day, no airports required. 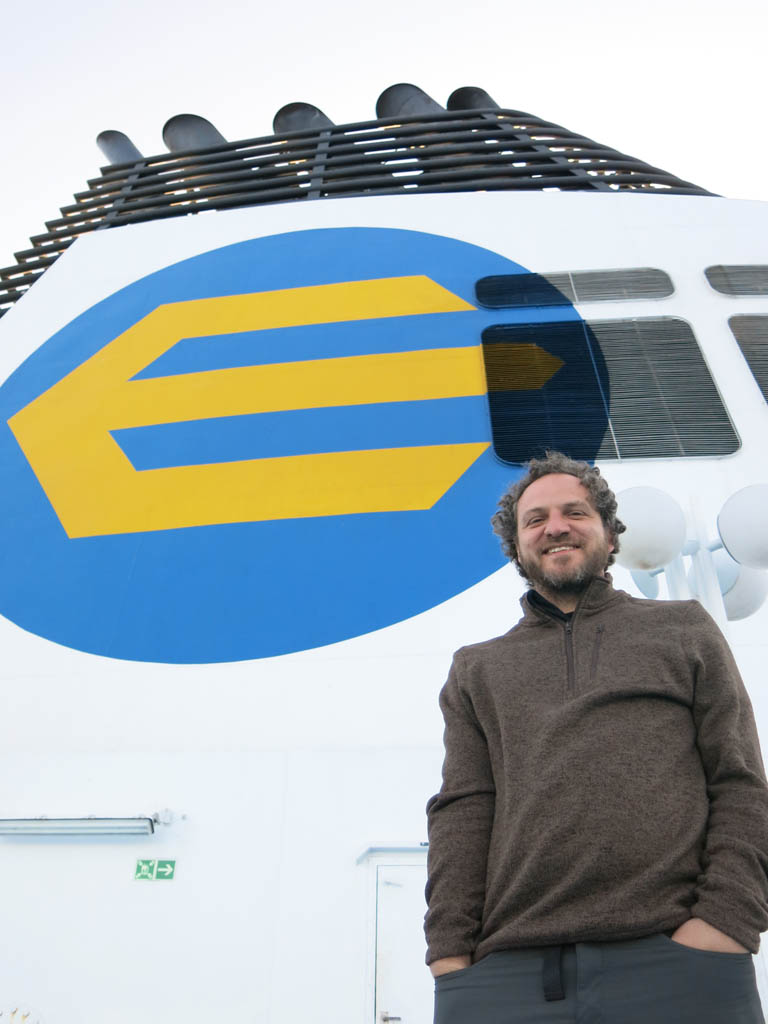 For our Sunday, I had planned to visit another country for the day with James. Tallinn in Estonia is just a 2 hour ferry ride away, so why not jump aboard and check another country off the list! That wasn’t the only reason to go however, by all accounts Tallinn was quite a cool city with a gorgeous old town. So with our tickets already acquired yesterday, we jumped on an early bus, back into Helsinki, to hop aboard our Eckeroline ferry to Tallinn. 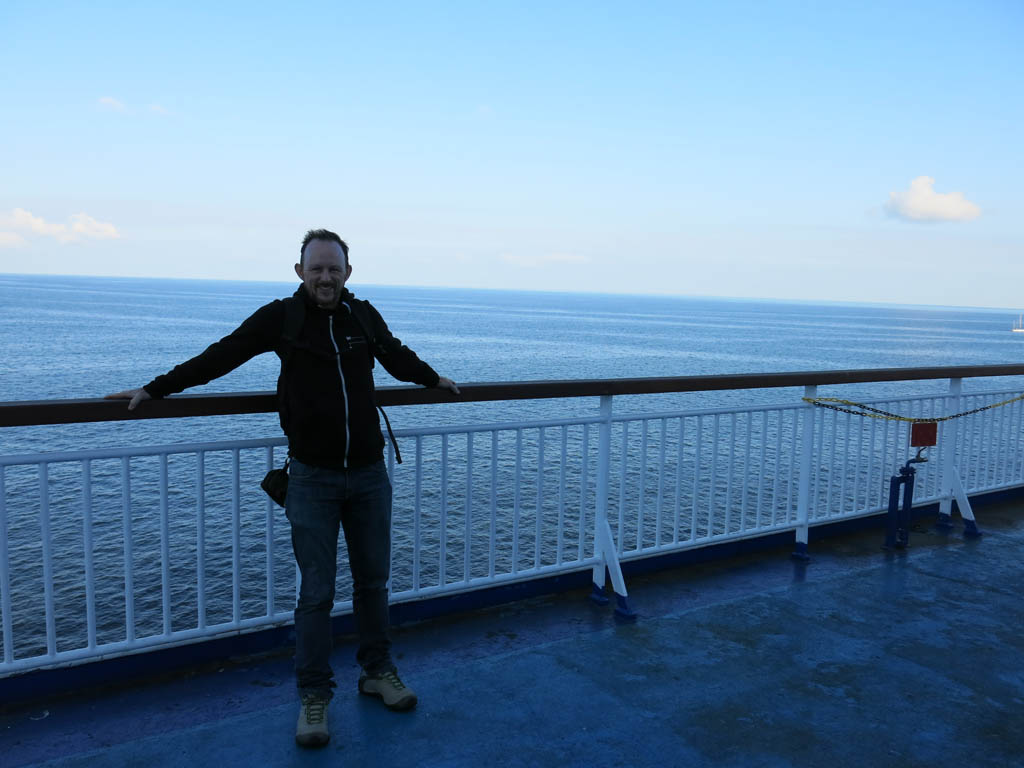 yeah, it was pretty cold

The ferry was actually fairly quiet. I had heard stories of them being chock full of Finns ready to booze it up, however the way over seemed to be mostly families heading for a day out in Tallinn. It was too early to booze it up anyway, being only 9am, so we just found a comfy seat and relaxed on our way over, with a little bit of exploring of the boat to fill in time.

At about 11am we arrived in Tallinn, and made the short walk from the ferry terminal to the old town. On the way through the terminal, we had our passports out, ready to enter a new country. But even though we were advised we would need them, we simply walked through, not bothered by anyone, as we formally entered Estonia. Ah, to freely travel about Europe! 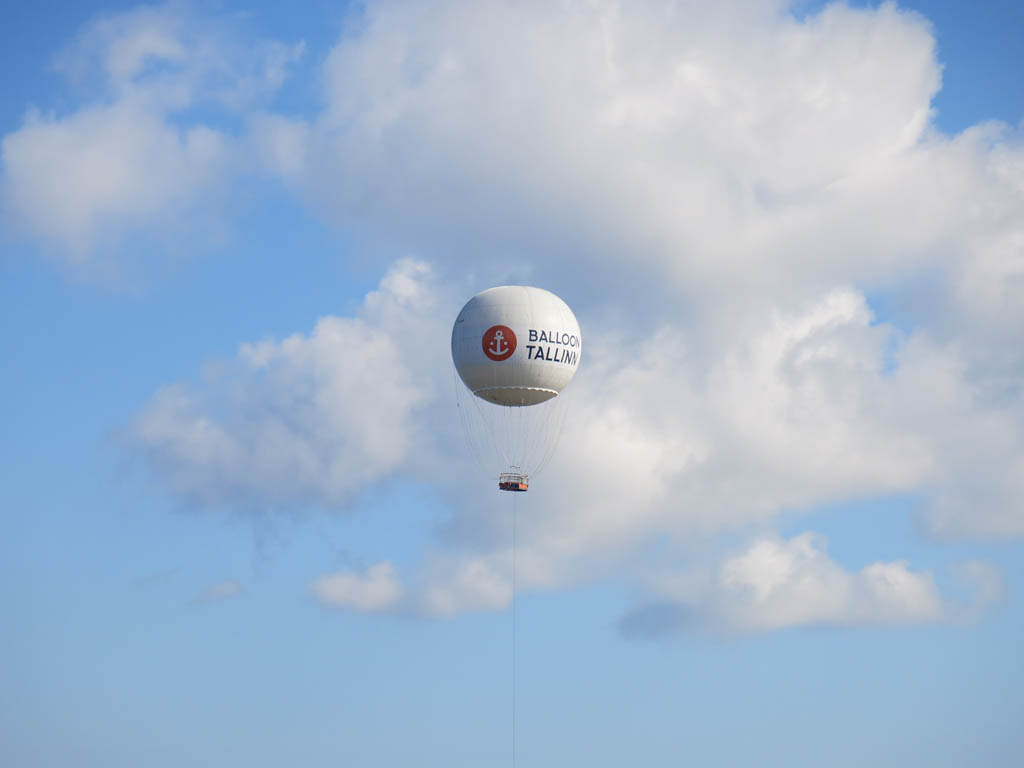 not a real hot air balloon… 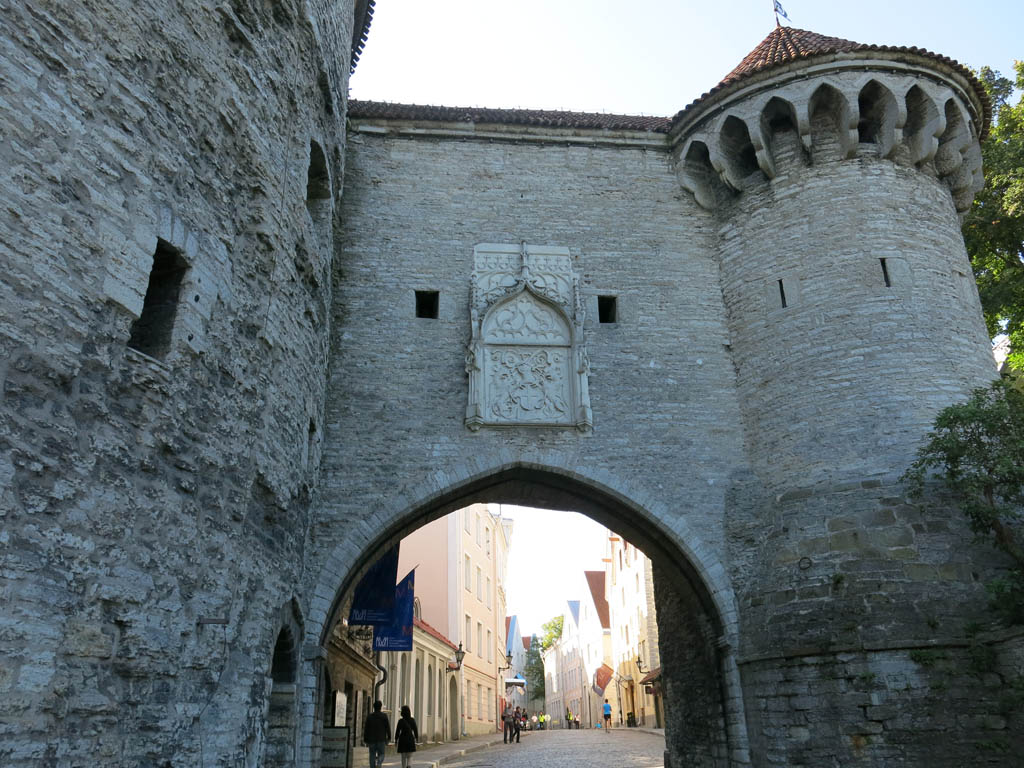 In no time at all we were entering the gates of the Tallinn old town. It was quite a nice contract to go from city streets, to cobbled old roads with no traffic. I got the sense it was going to be quite cool to explore. 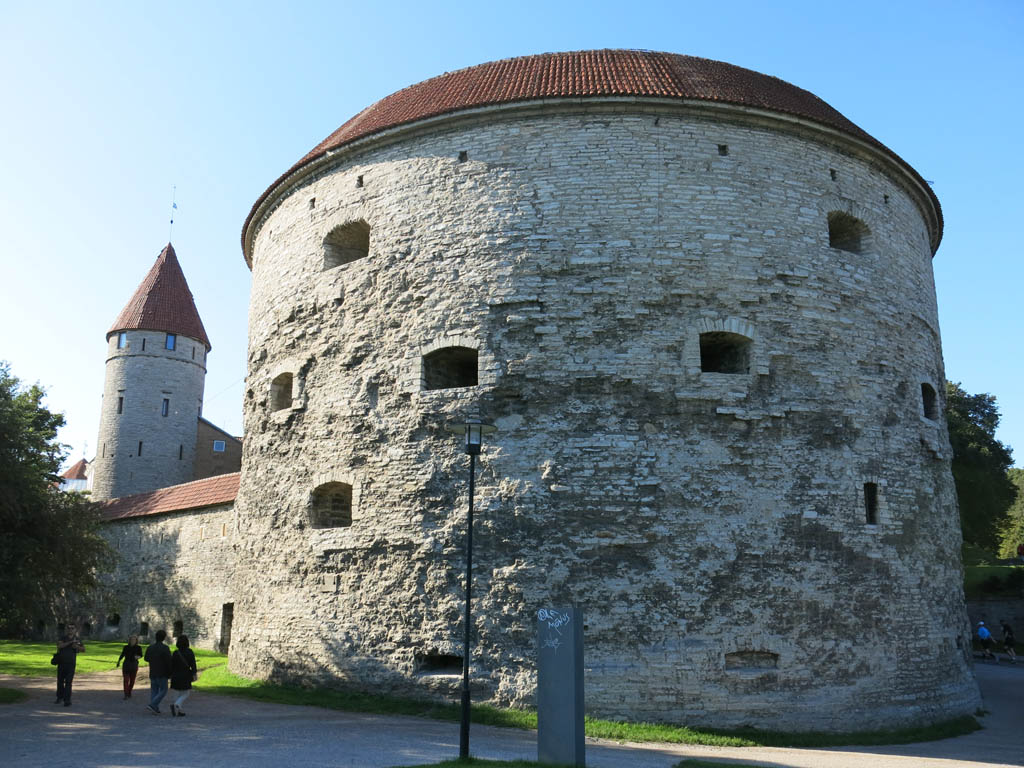 the start of MANY old buildings

At this entrance, we were greeted by an old building that had now been transformed into the Estonian Maritime Museum. While the maritime part was not that big a drawcard, for the sake of 5 euro we thought we would head in to have a look and be able to see across the old town from the roof. 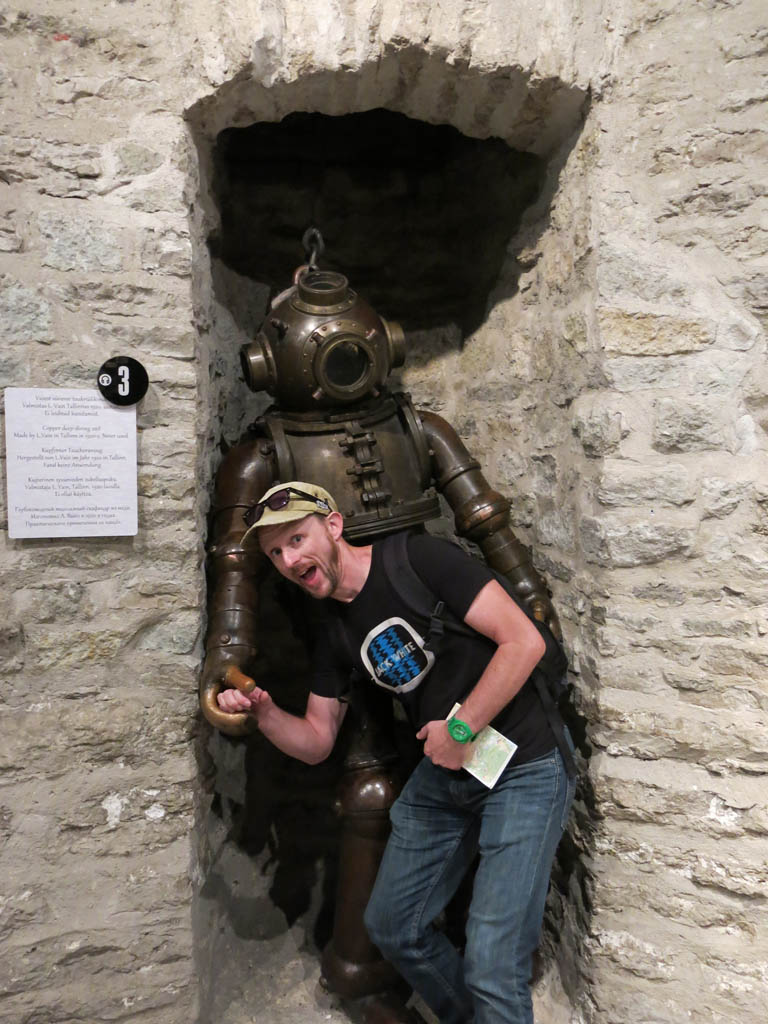 The museum was OK. It was packed full of random maritime things, however most details were in a few languages EXCLUDING English. So while we could look, we couldn’t follow everything. We could work out though that this guy was cool and a good photo op.

We also found out a bit about a local fish called Sprat (a herring like fish) that is apparently seasoned and tinned here in Tallinn (or so we could work out). They even had someone making small bits of bread and sprat for folks to try. And it was pretty tasty! 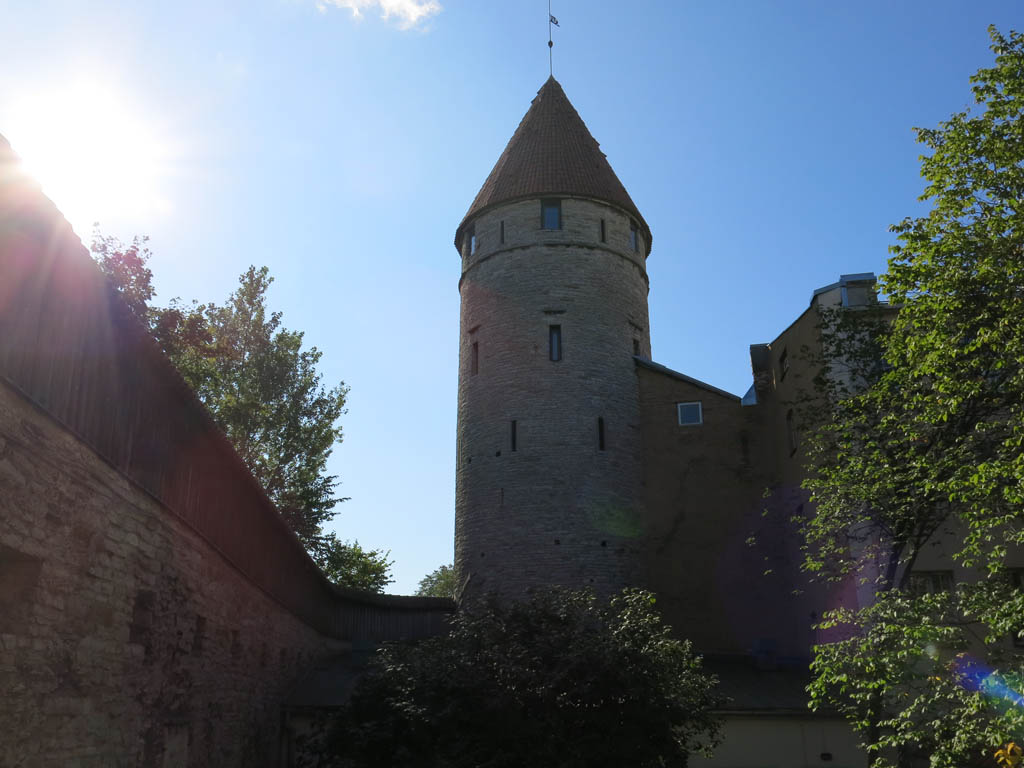 We made our way to the rooftop cafe. It was a bit early for a beer, so we just soaked up the views for a bit before moving on. 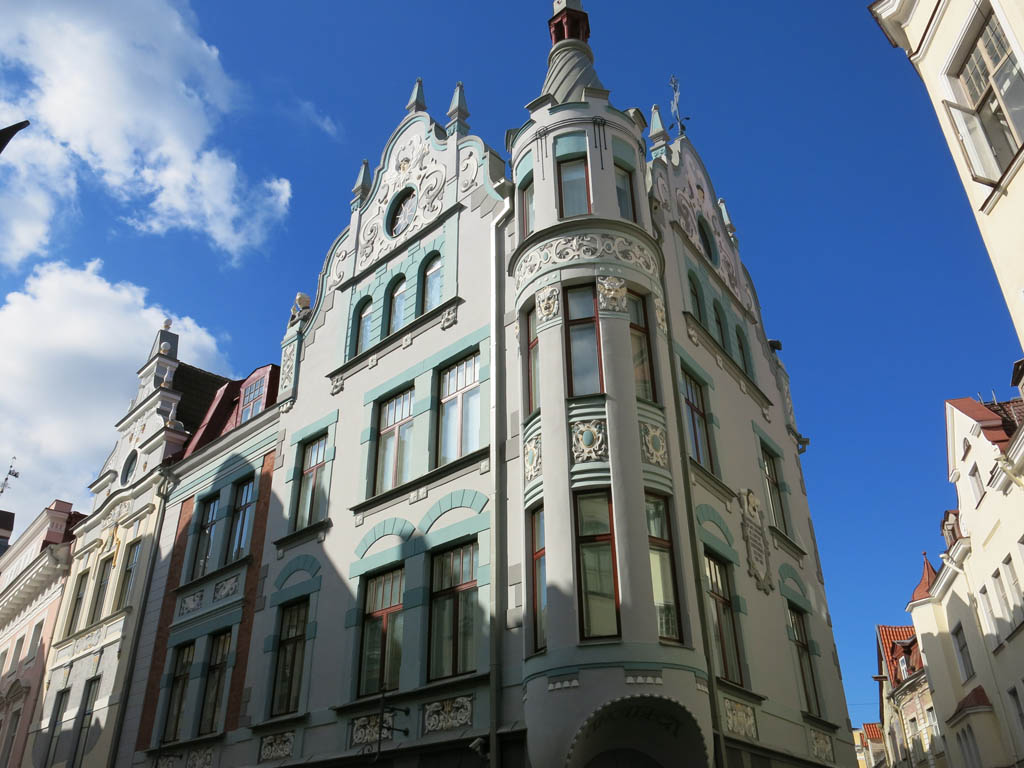 There really wasn’t a plan of any description. We were armed with a map of the city, but elected to wander. It seemed all roads led to the main town square. On our way we got to see a bunch of cool buildings in the old town. It certainly was quite a different way to spend the day than Helsinki. It seemed there was a cool building or church around every corner. 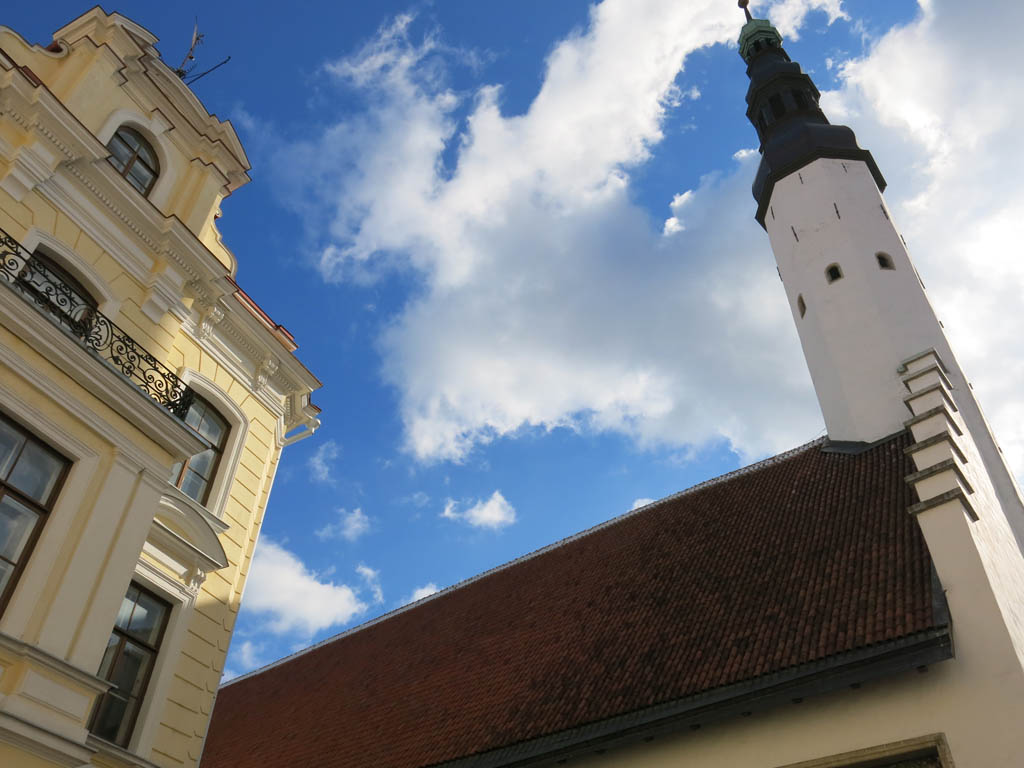 The town square was surrounded by cafes and bars like old town squares around the world. And they were all the more touristy (and expensive) of the ones that we passed on our travels. But it is all relative, with expensive on the town square still being much cheaper than anything in Helsinki. So we found one where we could grab a drink and bite to eat and chill for a bit. 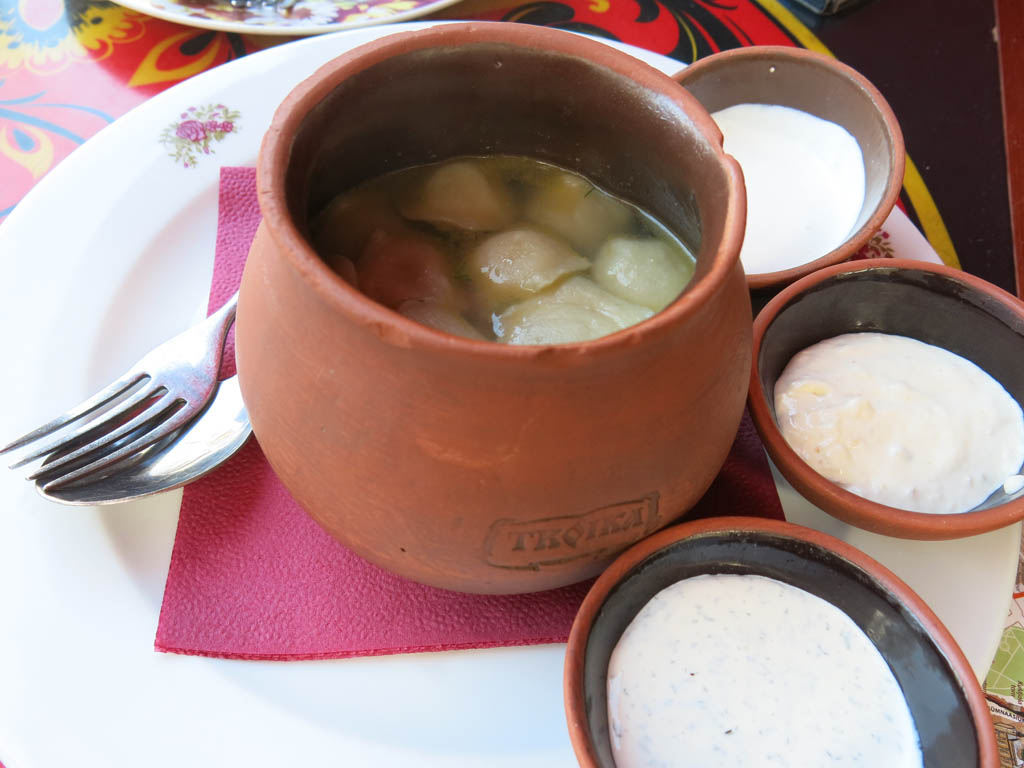 This was a Russian restaurant, with an all Russian menu. We just went for some dumplings and beer to tide us over for the moment. We were just content to have a brew in our hand and soak up this new city. 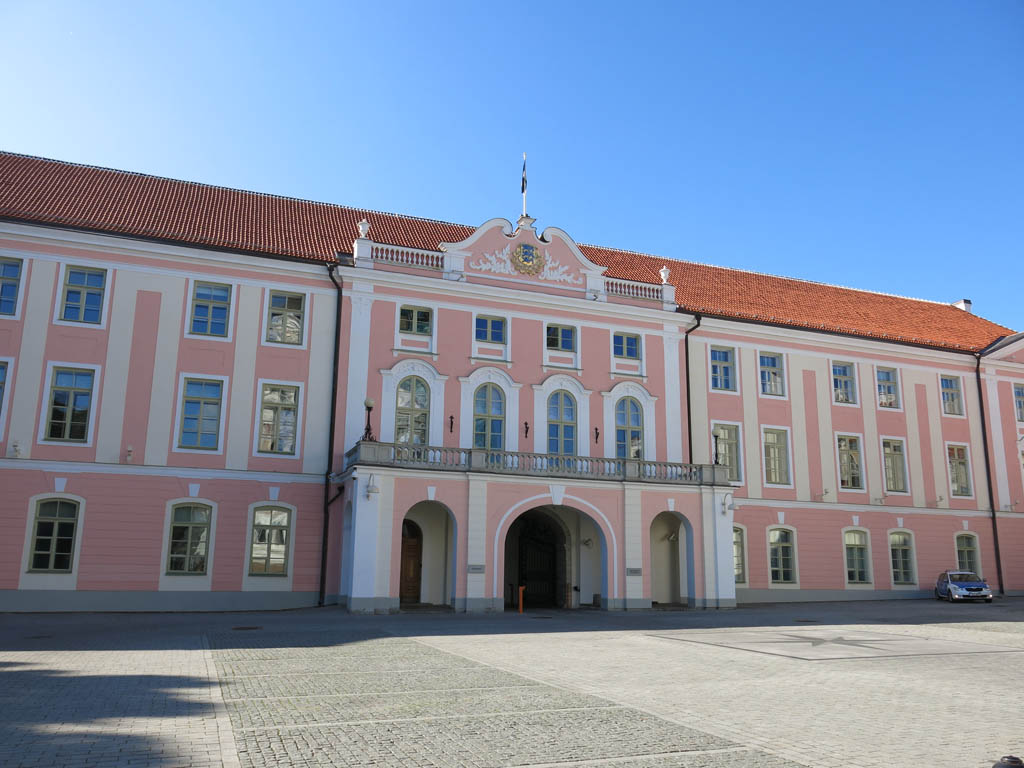 Given we only had the day, we started wandering again. On the outskirts of the old town, we came across a government building. And if it didn’t remind me of the Grand Budapest Hotel! The pink colour and even the styling made it immediately come to mind. I didn’t see M. Gustav or Zero anywhere though. 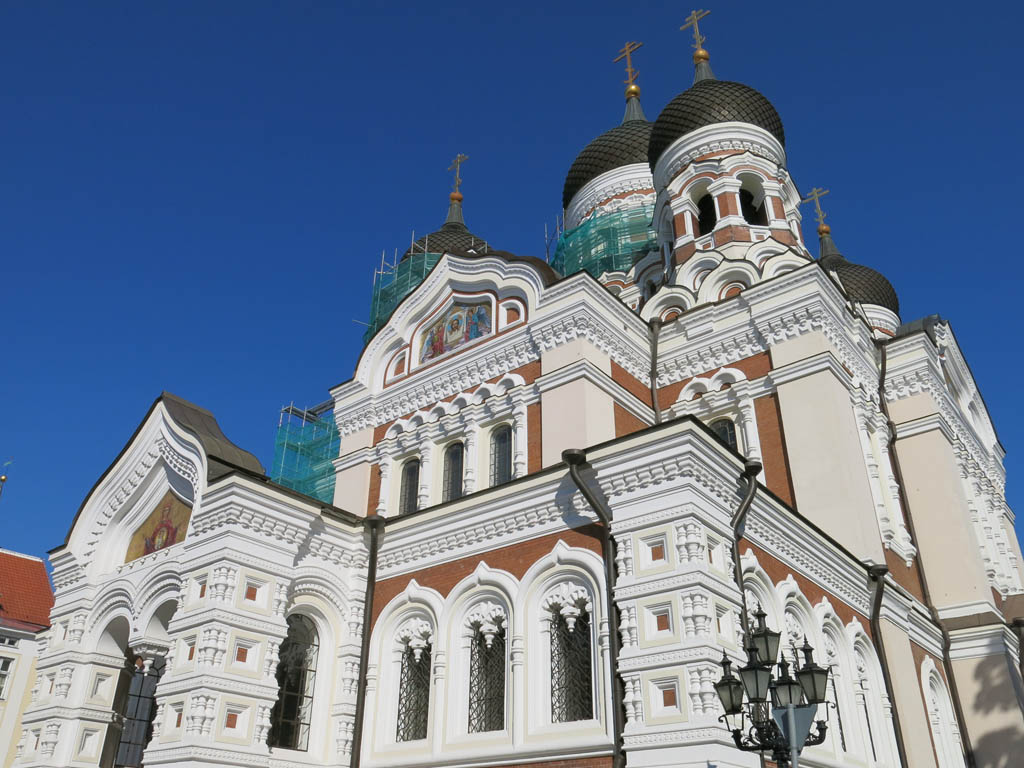 Across from it was cool Russian style church. It was easily the most interesting one we saw all day, with the inside being quite ornate and decorated. Sadly no photos allowed sorry folks! 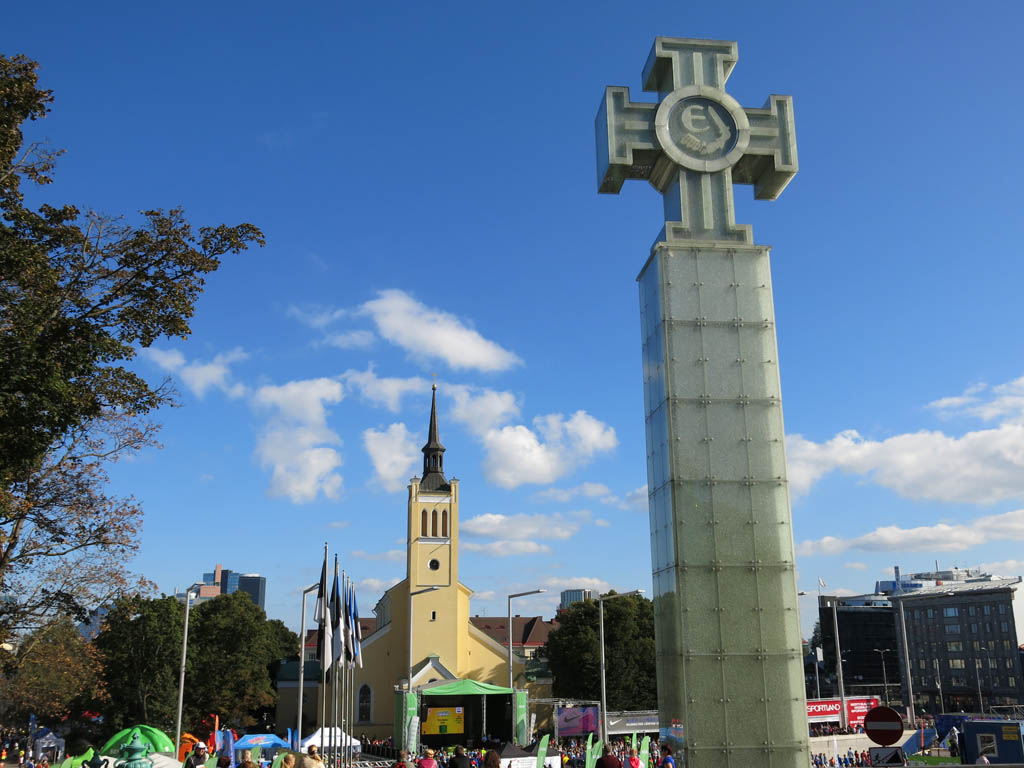 just near the finish line

The rest of the day was continued wandering about town. It seemed it was the day of the Tallinn marathon as we encountered lots of runners and the crowded finish line. If only we knew we could have busted out a lazy half marathon or something! Well, probably not. But at least we have the convenient excuse of not knowing about it. Bummer! 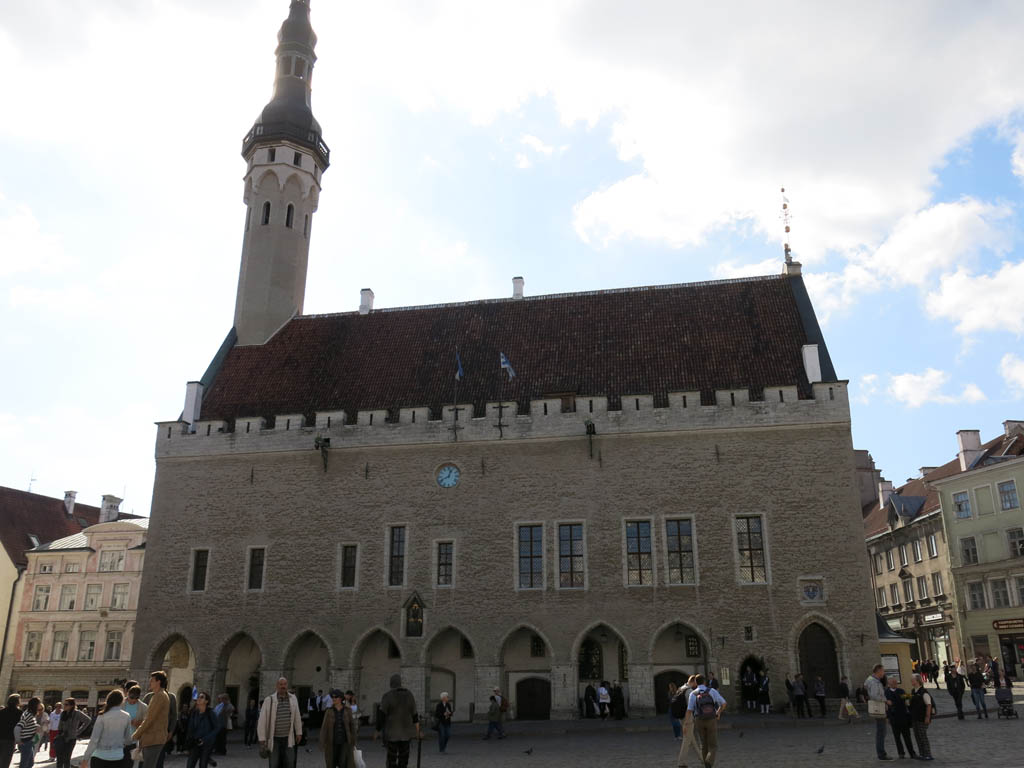 Back at the main square we noticed the main town hall building actually housed a small restaurant. It seemed it specialised in cheap, local meals, with the 2 euro elk soup sign grabbing our attention. How could we resist! I opted to go a pint of their local brew (in a ceramic mug of course) and some ox sausages and pickles. And boy were the sausages tasty! Super delicious and made us sad we didn’t find the place earlier so we could try everything on the limited, but tasty looking, menu. 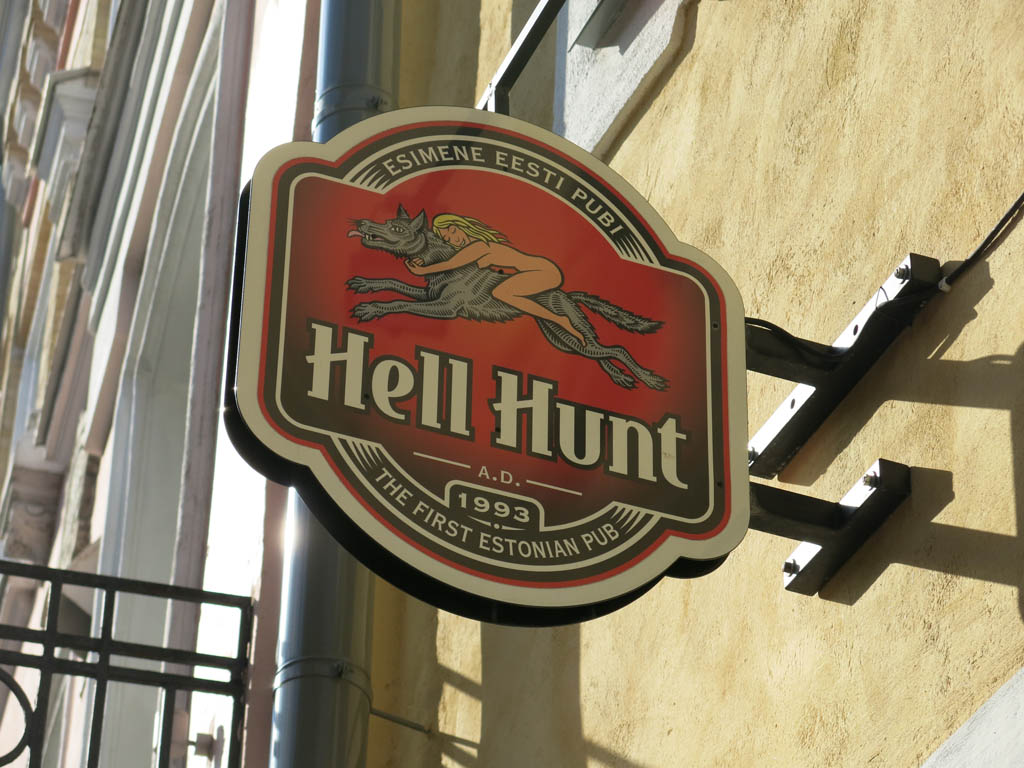 how could we not have a drink here!

With some more sustenance, we kept walking and by late afternoon felt we had explored a lot of what Tallinn had to offer (which was a lot of charm). In our slow meandering back to the ferry terminal, we passed an intriguing looking bar, the Hell Hunt. With a name like that we had to visit! 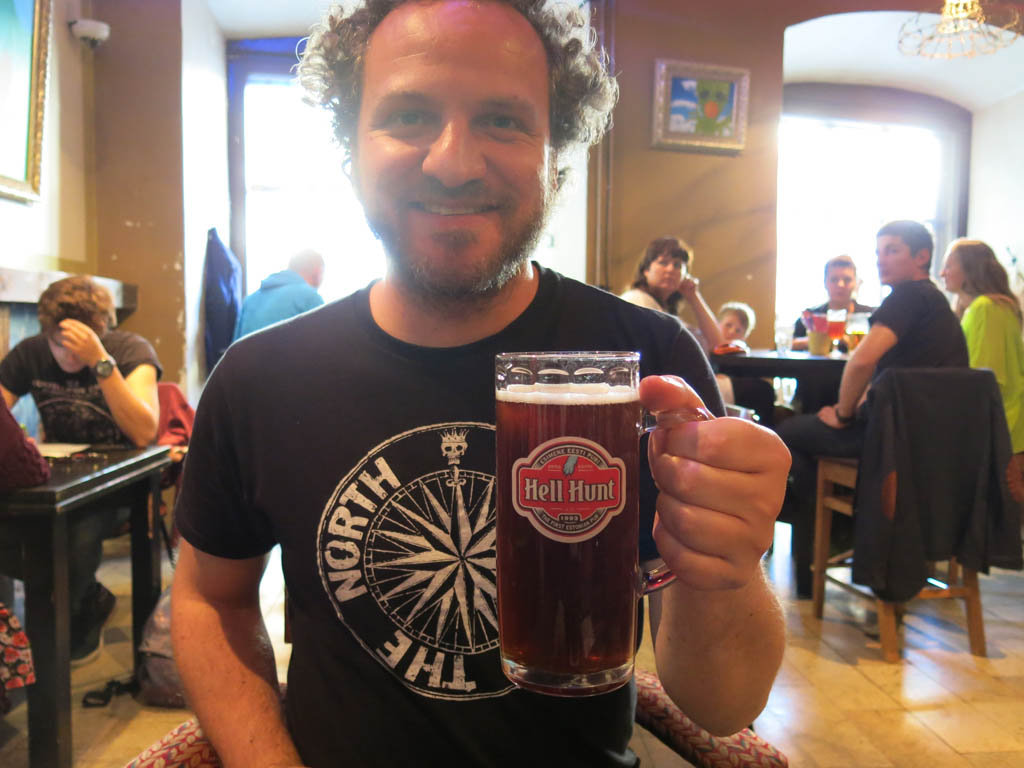 james-o give is the thumbs up

What we found was a pretty cool place with their own brew on tap. In the end we tried four of their own beers, which were all pretty tasty. I could get used to this place!

With the beer in our belly, and a ferry to catch, we made out way back to the ferry. The trip home was much more as expected… full of Finns coming back with slabs and slabs of beer. in fact it seemed that most had a similar mode of carriage, with a small fold up trolley carrying their many slabs of booze. I have had no idea what the alcohol limit was, but it seemed like it was a lot. I counted one guy with 10 slabs of beer (let along whatever spirits he had in his bag).

The arrival back in Helsinki was just like Tallinn… no passport control. So it was quickly through and on a bus back to the apartment. A long day but an awesome one of exploring new countries… and their beers 🙂