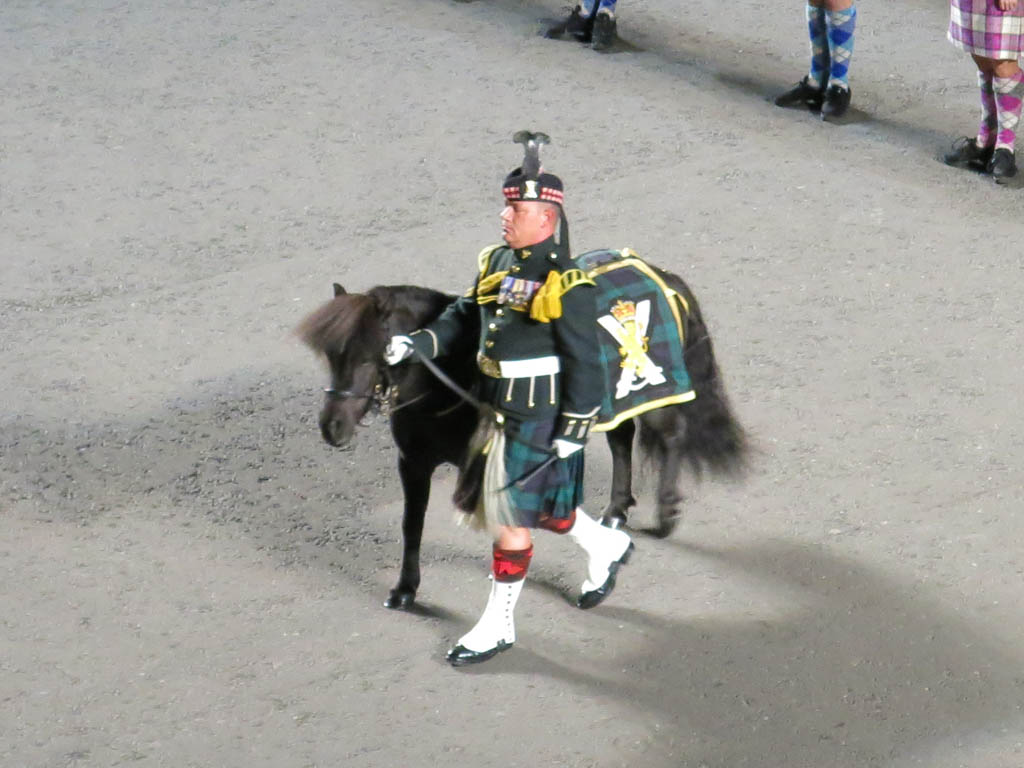 a picture of a pony. just because.

This blog entry will be a rare one in that I don’t really have any pics for you today. Everything we got up to either didn’t allow pictures, or didn’t really involve pictures. Super sorry, but that is the way it is sometimes. But I did provide you with this picture of a pony from last nights Tattoo, which I realised I didn’t post earlier. So there you go. Everyone loves a pony.

So what did we get up to today? First up was a visit to Mary King’s Close. This is a local tourist attraction that lets you visit some of the narrow hidden streets and “houses” that are still buried under the main streets of Edinburgh. It seems that many were built over during the past few centuries, but many were not actually filled in.

The Mary King’s Close experience is more than just a walk through, rather you are led through by someone in character who weaves facts and stories in together while leading you through. It was pretty cool. Being in the main close was quite incredible to think we were in what is a narrow laneway, but buried below the streets above. While a bit kitsch, it was worth a visit.

We had tickets to some comedy later on in the day, as well as having a bunch of tickets for tomorrow, so today we decided to see a film for a change. Knowing I had no other chance of seeing Guardians of the Galaxy on the big screen, we decided to head and see that.

Verdict? It was pretty OK! Nice and irreverent and self-aware which was nice, but also a little of a missed opportunity in that regard, as for long stretches, while it had its tongue in cheek, it was still ultimately a regular comic book movie. Albeit a bit smarter and funnier than normal. It was hard seeing Andy from Parks & Rec running around like that though.

Nothing exotic for dinner tonight, rather something easy on the way to get some more comedy action. Tonight was a pick that was a little random, in that all my goal was, was to find something at about 8pm. Good word was spreading about James Acaster, and he seemed somewhat familiar, so it was he that was chosen. He was at the Pleasance Courtyard, which, like the Gilded Balloon, was an amazing hive of activity, with about 10 shows going on at once. At just past 8, we were greeted by Mr Acaster, down on knees with feet up (for reasons I will not share), launching into his show.

And it was amazing! I had a great time with this show. The perfect blend of theme/story, absurdity, recurring gags, and one-liners. Plus, the final few minutes tied it up perfectly in a way that I love in my comedy shows. I can’t recommend him enough, and if he makes his way back to Australia I will be there for sure.

So that’s it for today folks! Tickets for 3 more shows tomorrow, our last day in Edinburgh before heading off on more exciting adventures.