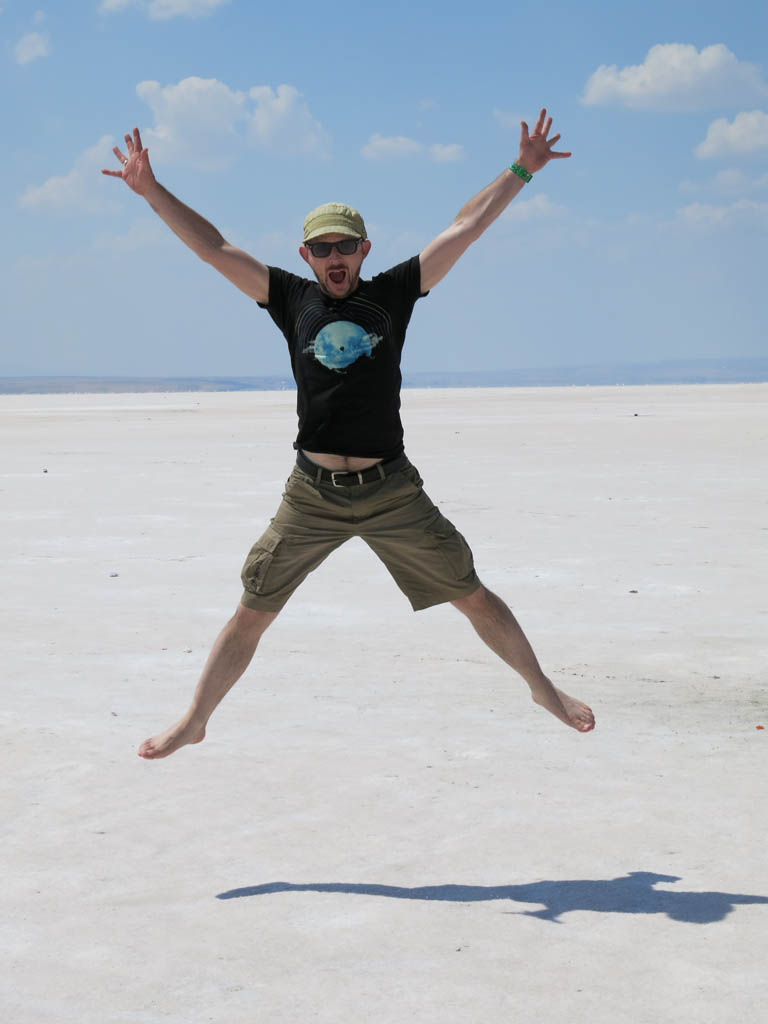 no, i’m not the main man of the title

We woke in Ankara, and finally able to see it in the day time. We didn’t have plans to stay in Ankara, only the morning, as there was not too much to see.

Ankara seems to be Turkey’s Canberra… the city most people don’t realise is the capital, and full of government workers. But it is also home to an amazing museum dedicated to the famous Turkish leader Ataturk, as well as his final resting place. 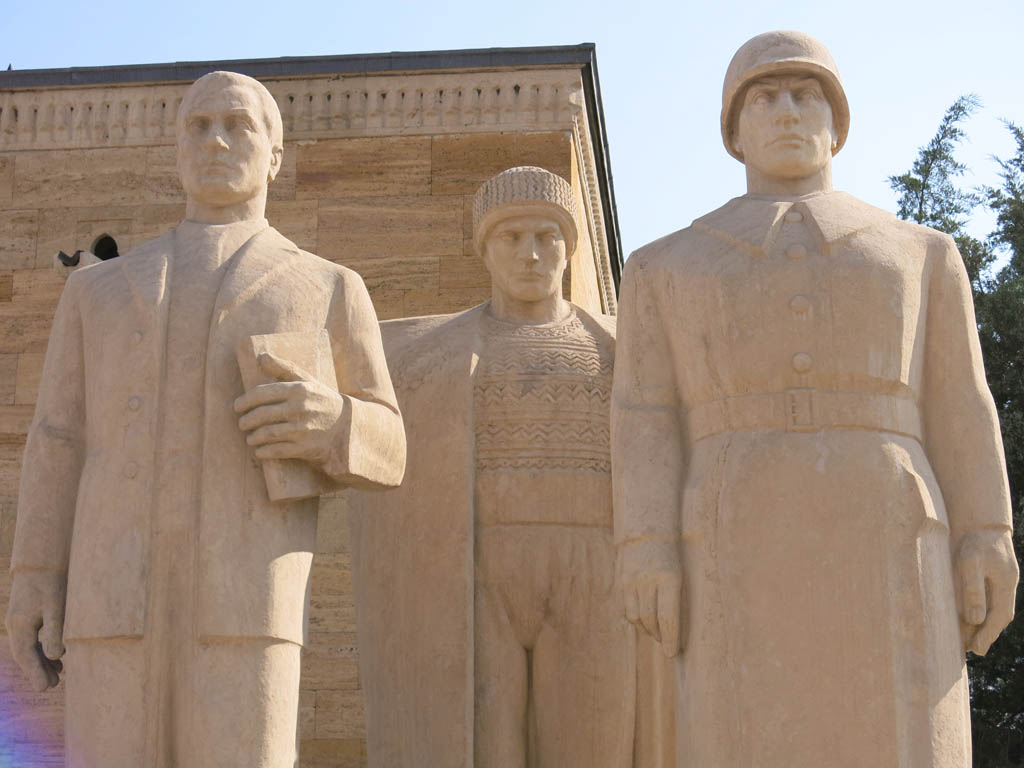 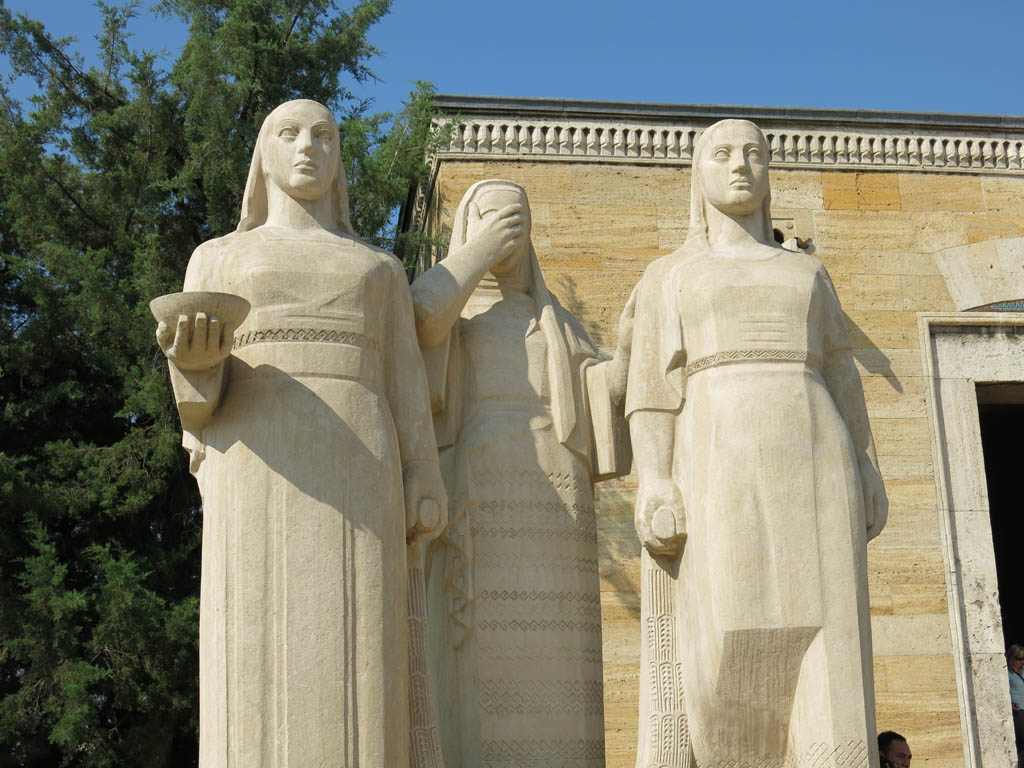 …as do the women

So off we all went to check that out before leaving town. The site of the museum was truly incredible… perched up on a hill in the middle of Ankara. We could see the city 360 degrees about us. Just as impressive was the whole grounds. First we were greeted by some small exhibits describing the site. It was flanked by statues representing the Turkish people and their independence in the 1920’s. 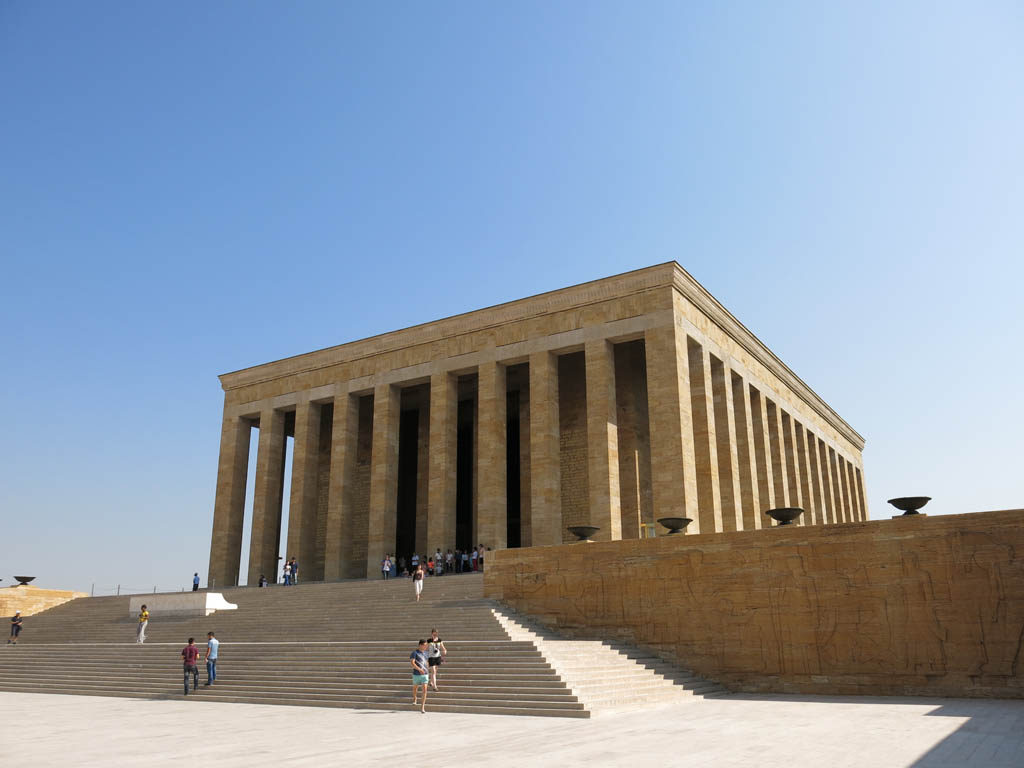 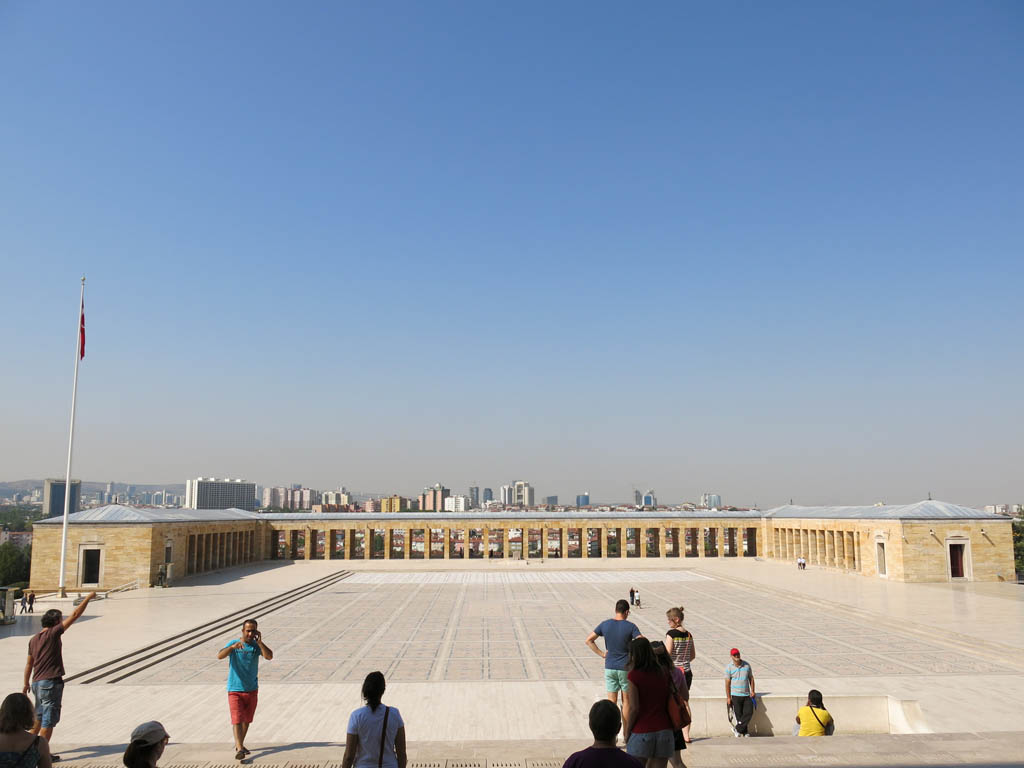 … high above the city

We then walked the path up to the amazing main building, containing the resting place of Mustafa Ataturk. As well as the tomb, it is also a fairly impressive museum, containing many works of art and artefacts about the man. 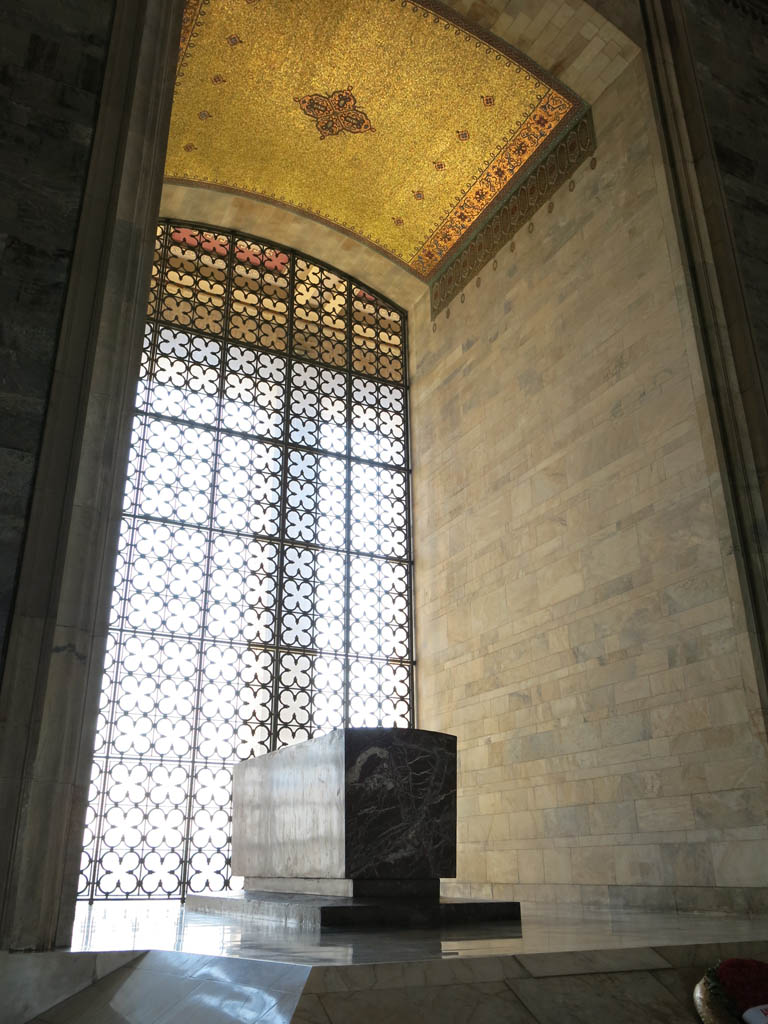 above his resting place

Ataturk was responsible for turning Turkey into the country it is today, bringing some peace after WW1 as well as democracy. As such he is revered in the country, and his presence is ubiquitous. 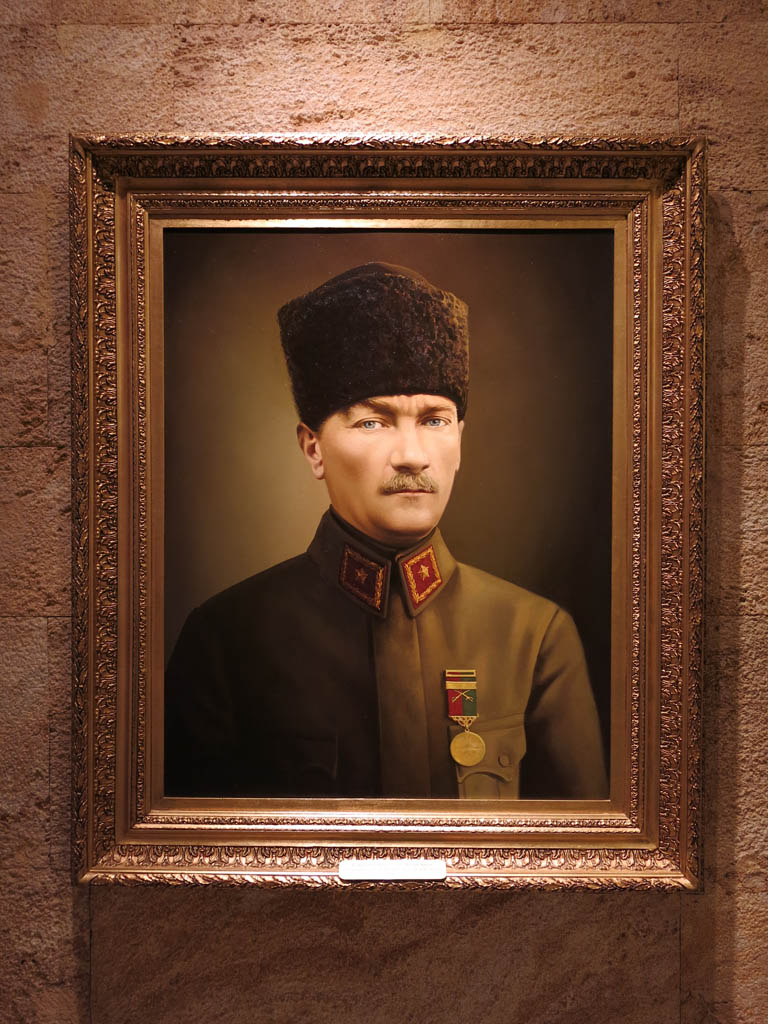 The museum filled in quite a lot of gaps I had about Turkish history and some things began to make a bit more sense. Australia was represented a little in the museum, with references to Gallipoli, however that will no doubt be a more extensive blog entry in a couple of weeks. 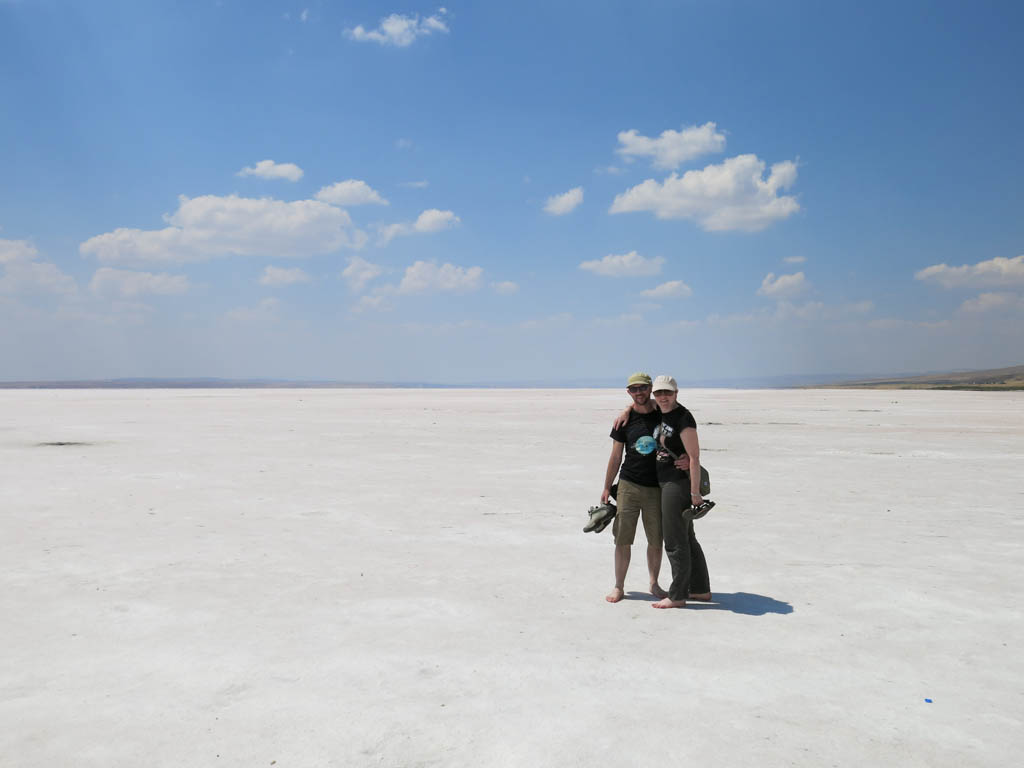 barren salt lake (other tourists conveniently out of shot)

With that done it was time to leave Ankara, to head toward Cappadocia. About an hour and a half out of the city we came to an immense dry salt lake. We had a quick chance to walk out into it, having the salt crunch beneath our feet. 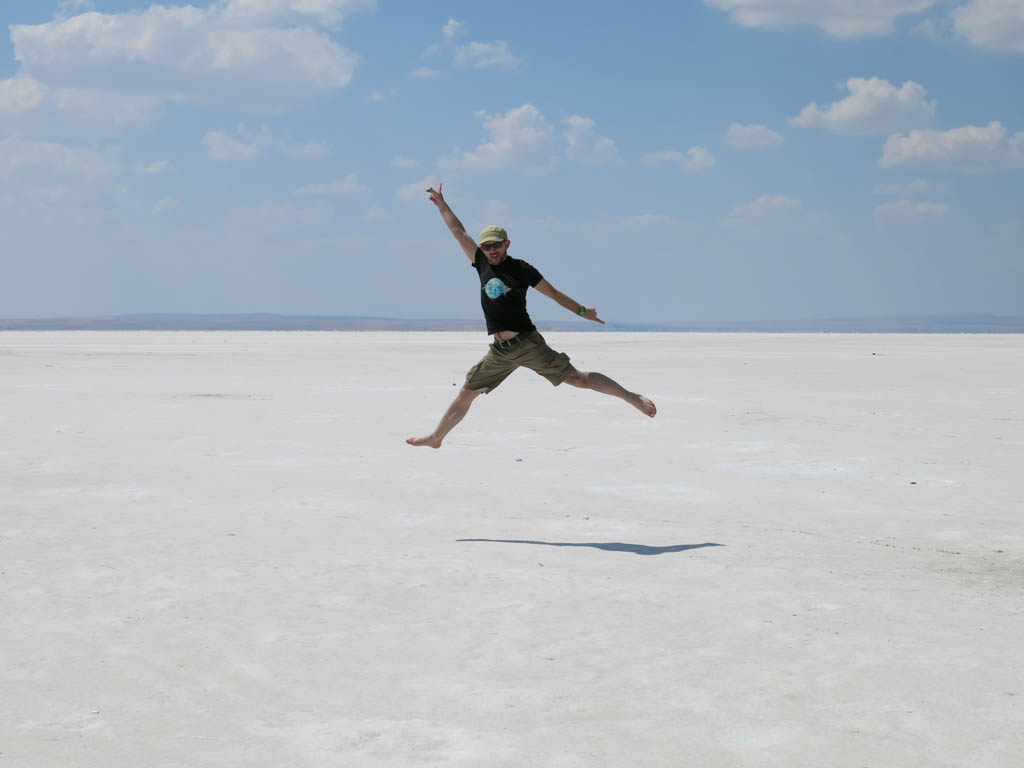 i call this the “michael jordan” 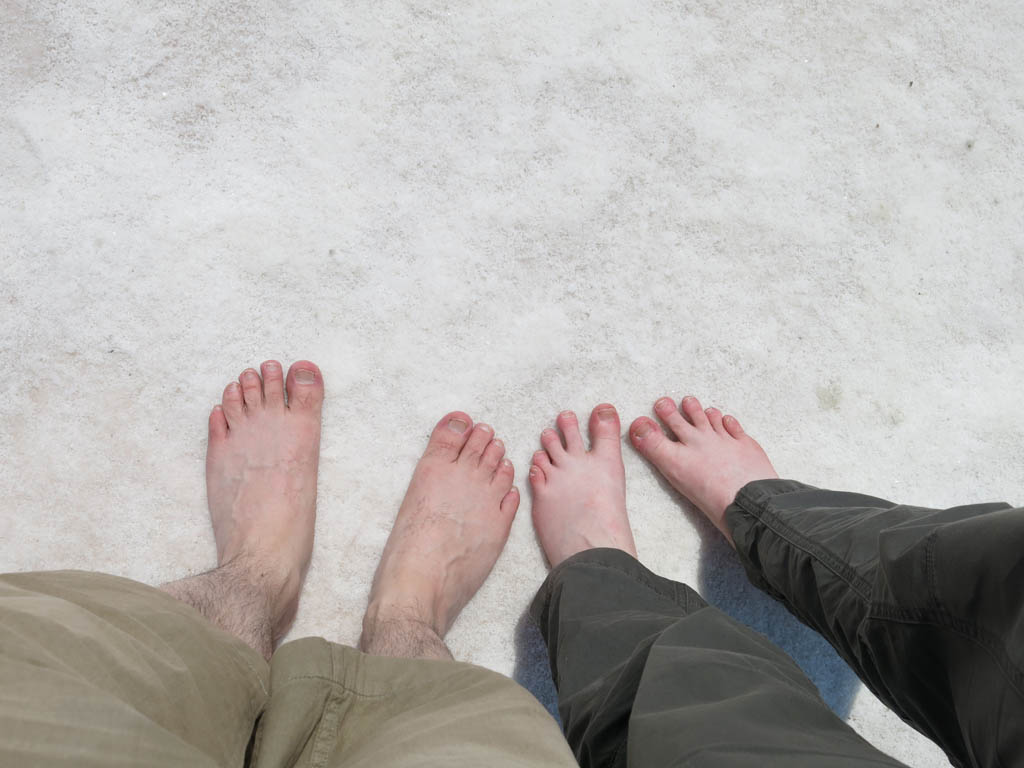 Of course it was an excuse for sun photos, with every second person jumping around like a loon. So it wasn’t just me for a change. The dry lake looked incredible, and the whole group was in awe of it. Funny how a 15 minute stop at the side of the freeway can capture everyone’s imagination like that. 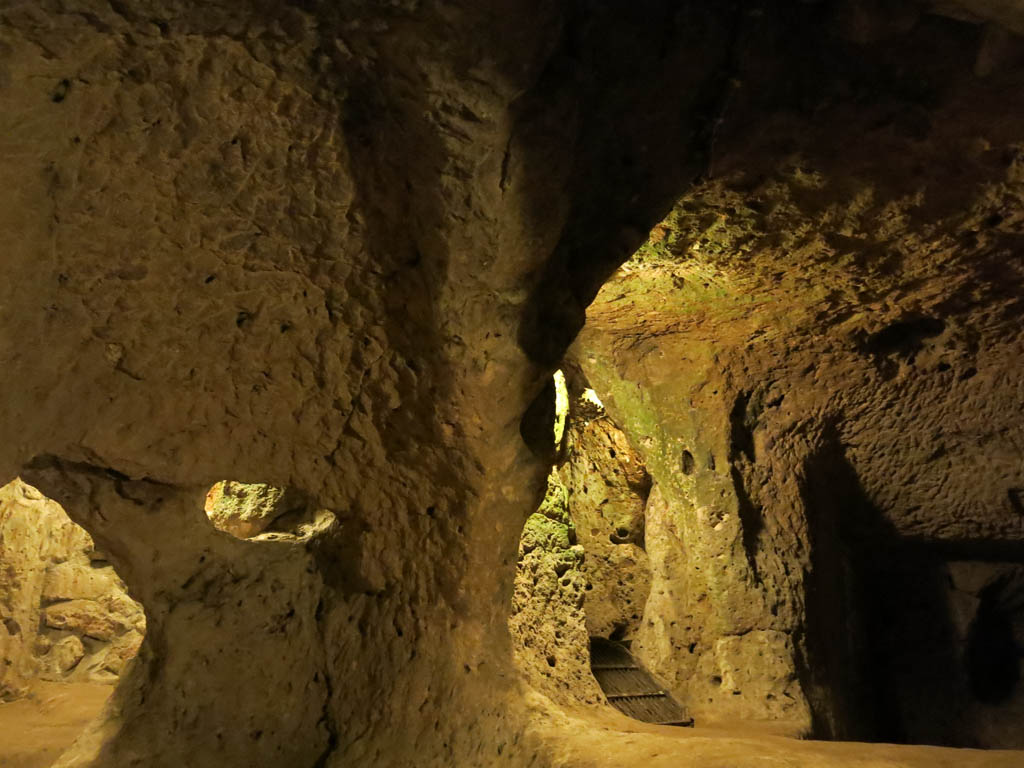 From then on it was another few hours to finally reach the valleys of Cappadocia in central Turkey. Cappadocia is known for a number of things, the two main ones being the amazing valleys, volcanoes, and formations that surround, and also what is hidden underneath. Underneath are many forgotten cities that were used for centuries, especially during times of invasion. The largest is >Derinkuyu and we visited it for an hour on the way to our hotel. 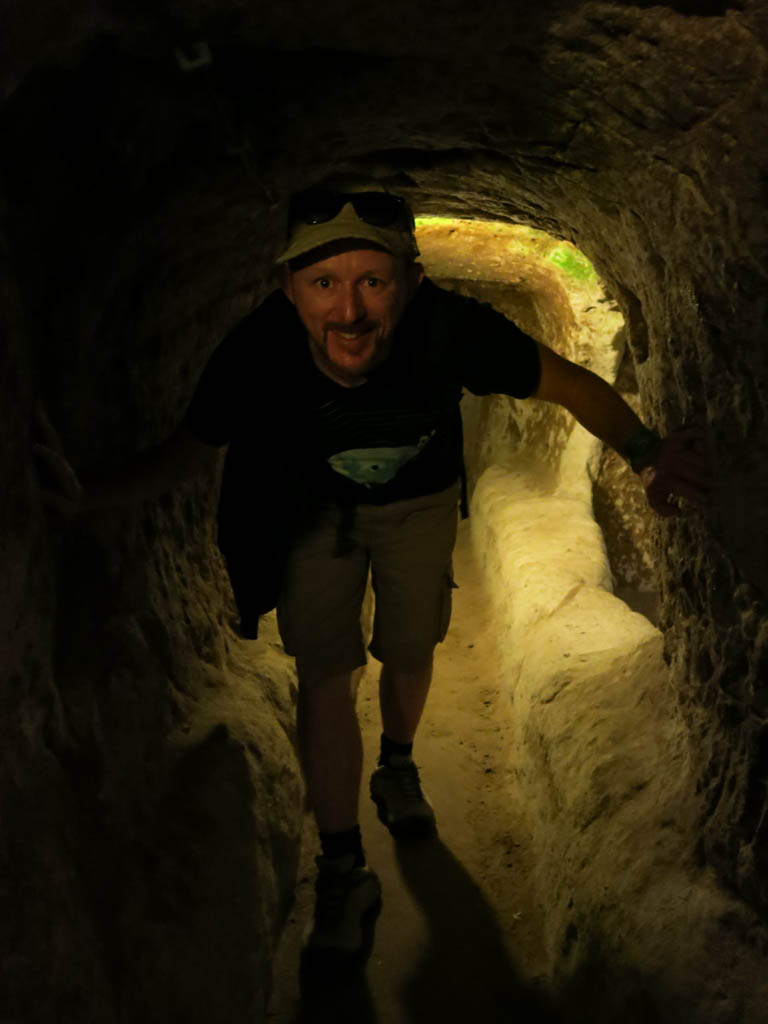 What lie below the surface was 8 levels of rooms and passage ways that were pretty incredible. Much was still to be uncovered, including tunnels assumed to lead to more underground city. Apparently this city could house around 3000 people. Given we only saw part I don’t doubt… even though it would be a little cosy. 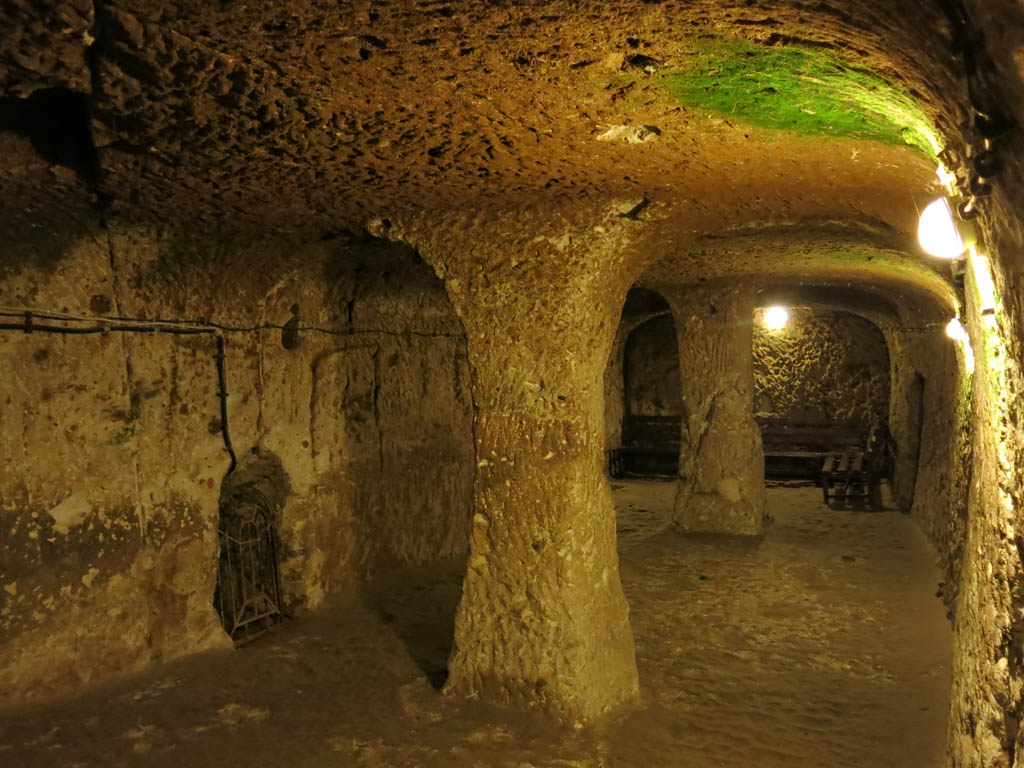 plenty of room for a flat screen tv

We made our way through, with Ibo giving us the run down of the history and living conditions. Many passages were one way only leading to jams of people. Thankfully I’m not claustrophobic!

With that, it was time to arrive in the nearby town of Goreme, where we would be based for the next 3 nights. A quick bit of rest, and it was off to what is a bit of a G Adventures tradition, visiting a local family for hospitality and food. 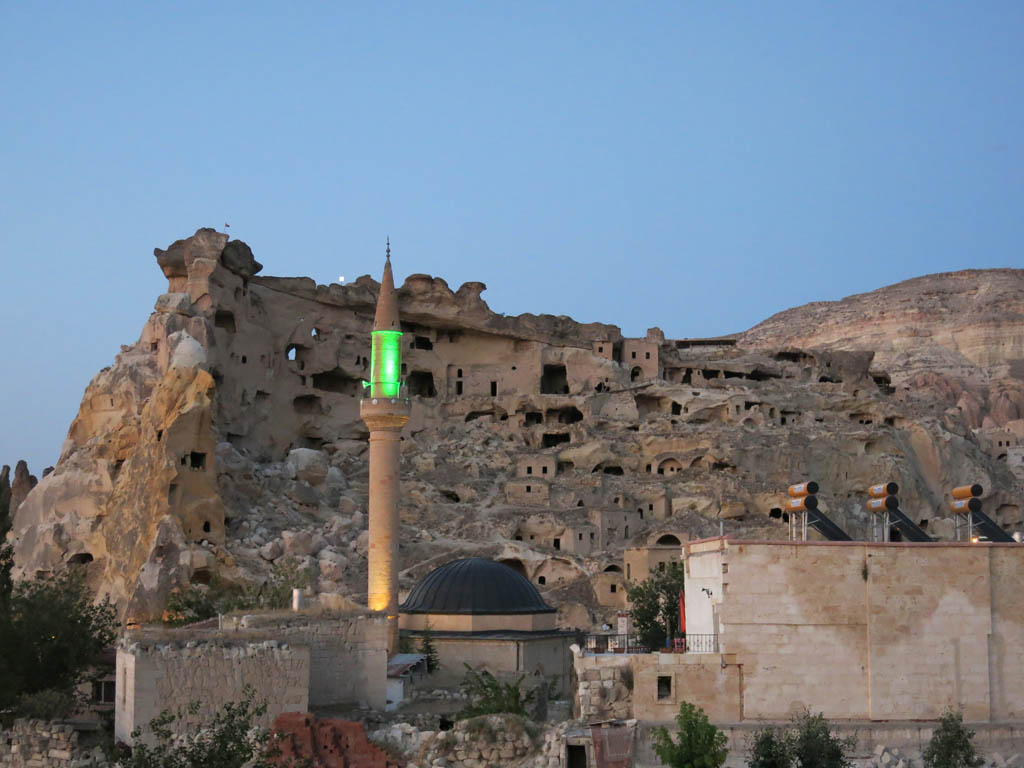 not a bad view

They used to live in one of the near by stone houses, but when everybody got moved out, they at least kept some amazing views of their old place. Our hosts (whos names escape me badly) made us a great feast of borek, salad, lentil soup, stuffed eggplant, and most importantly baclava. Oh man, it was so delicious! Everyone ate every little bit. 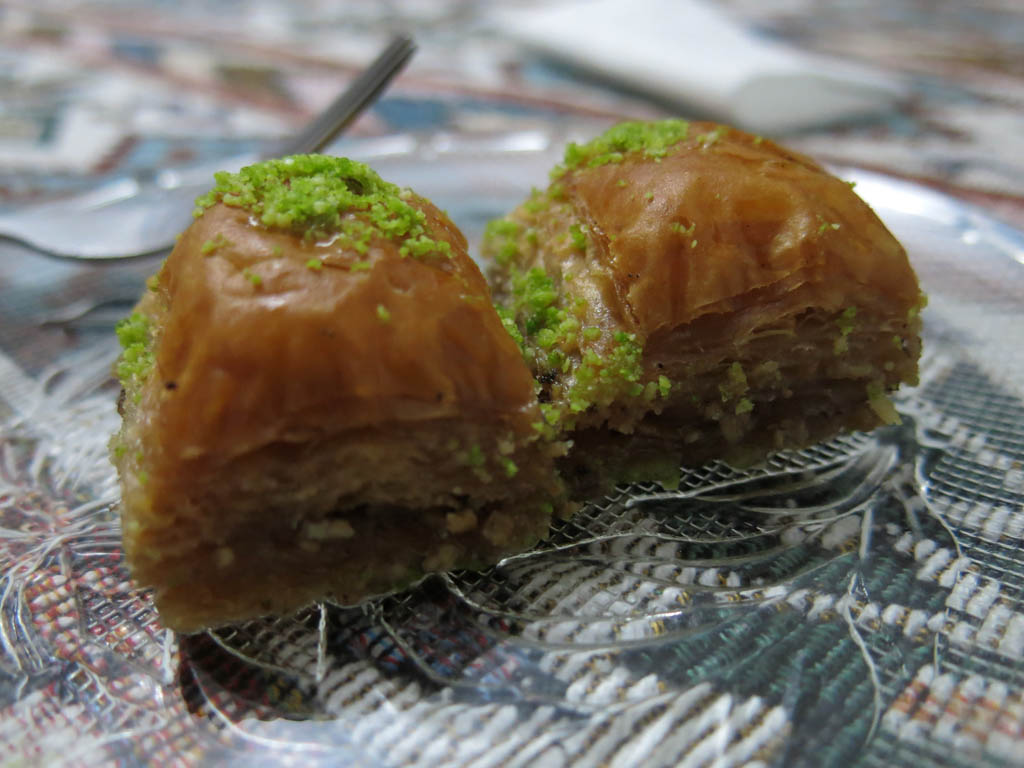 With full bellies, I decided to call it a night rather than go out for drinks. We had a VERY early morning ahead of us…