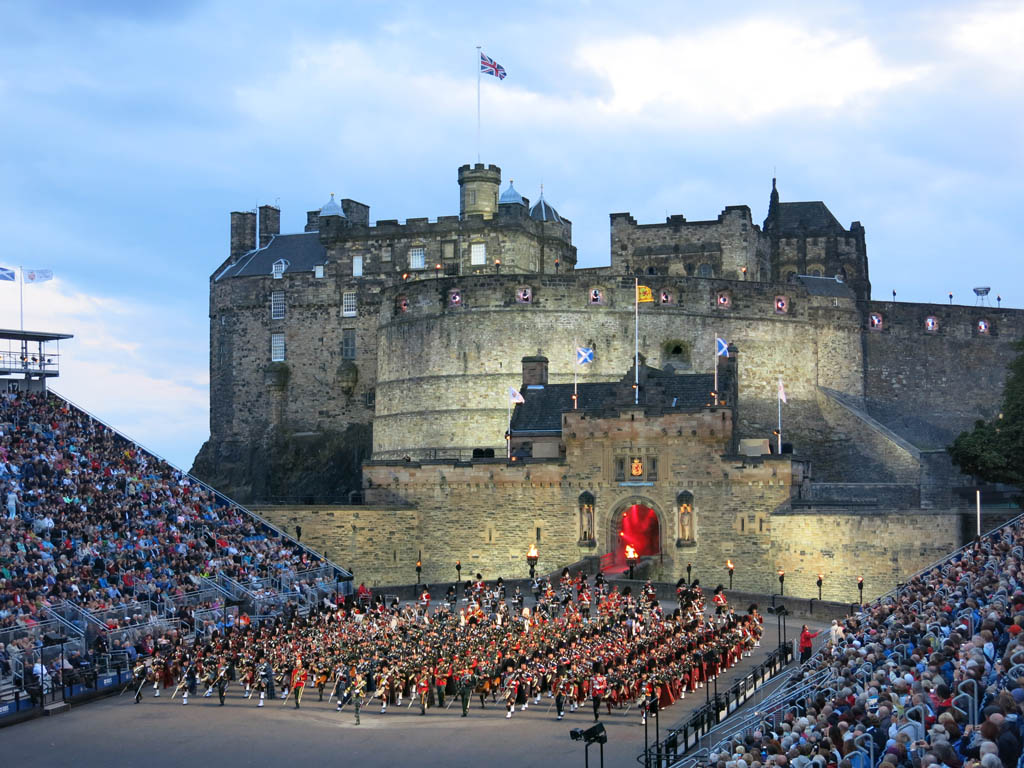 Today was another Fringe day, although one of a bit of a different experience. Rather than comedy or music, it was to be mostly about castles and cannons and bagpipes. Yep, it was off to the Royal Military Tattoo. 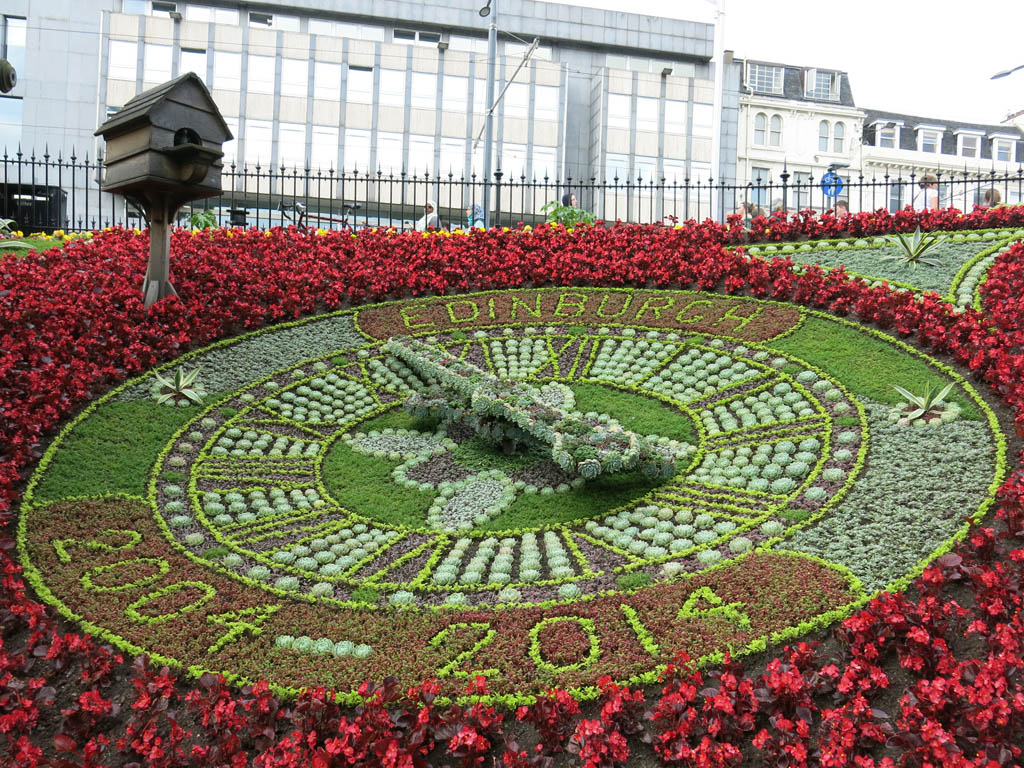 what time is it?

First up though it was a lazy start and a casual wander about Edinburgh. We did a bit of a pop in to the Portrait Gallery, which was chock full of royal portraiture as well as a good exhibition of WW1 portraits. Sadly though there was very little modern work on the walls. Maybe it had made way for the special exhibits, who knows.

After that it was a casual wander along the main shopping street, just for a bit of a look, but not really any shopping. Last thing we needed were things to be carting around for the next few weeks!

As you can see it was a bit of a day of recouping as we knew there would be many more fringe shows to squeeze in. One thing I knew I wanted to check out was an art space called Summerhall that was a bit of a walk away. There they had some work by street artists Faile and Bask, as well as a room full of Gary Baseman. So off we legged it and within about half an hour were in a rather cavernous building, with little art installations in every nook and cranny. 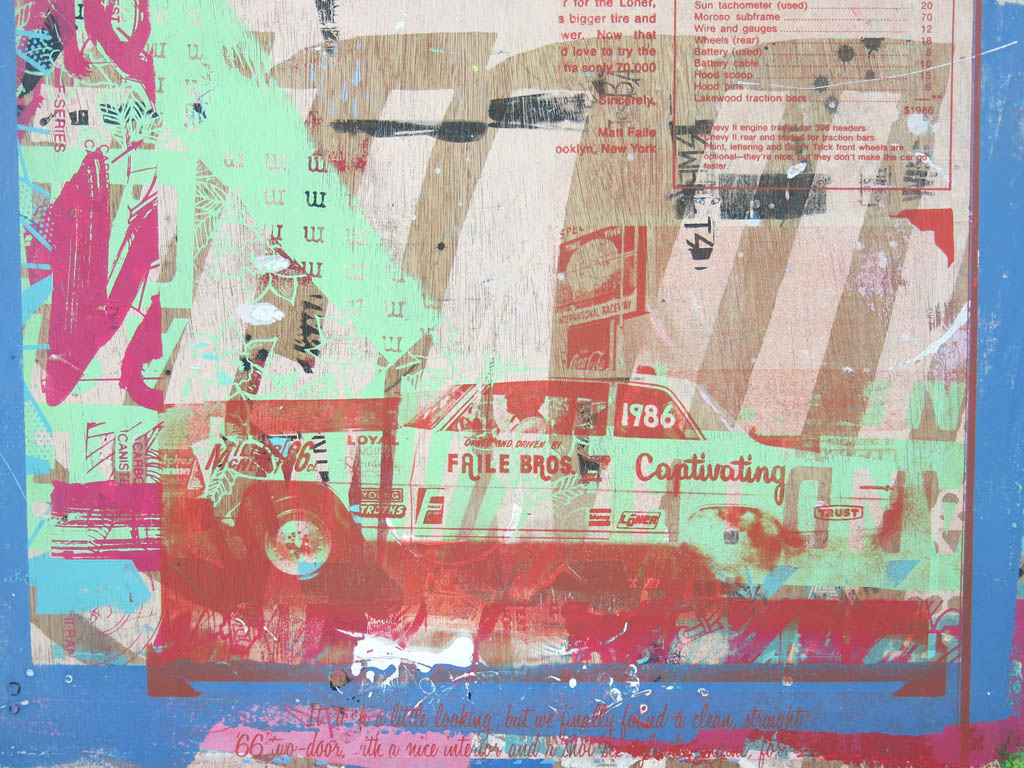 The first thing I found was a room of vestige board paintings by Faile that were not like their usual work. I’m not sure it was completely my thing, but it was interesting to see snippets of their more well known stencil work peeking through the chaos. 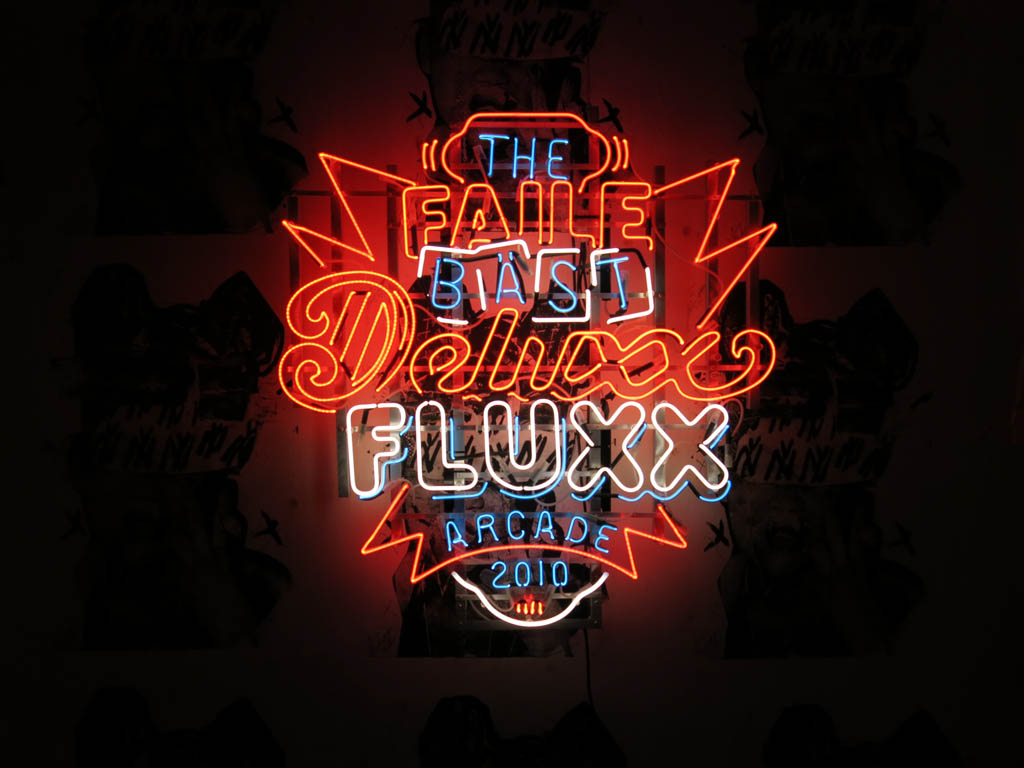 now this is an arcade

Their best work was in a shared space with Bask, called Deluxx Fluxx Arcade. Basically it was a collection of old school arcade and pinball machines, defaced by Faile and Bask, and were even complete with Faile designed computer games on them. They were all quite odd and random, but it was a bit of fun to be playing around with them, and also on the pinball machine. 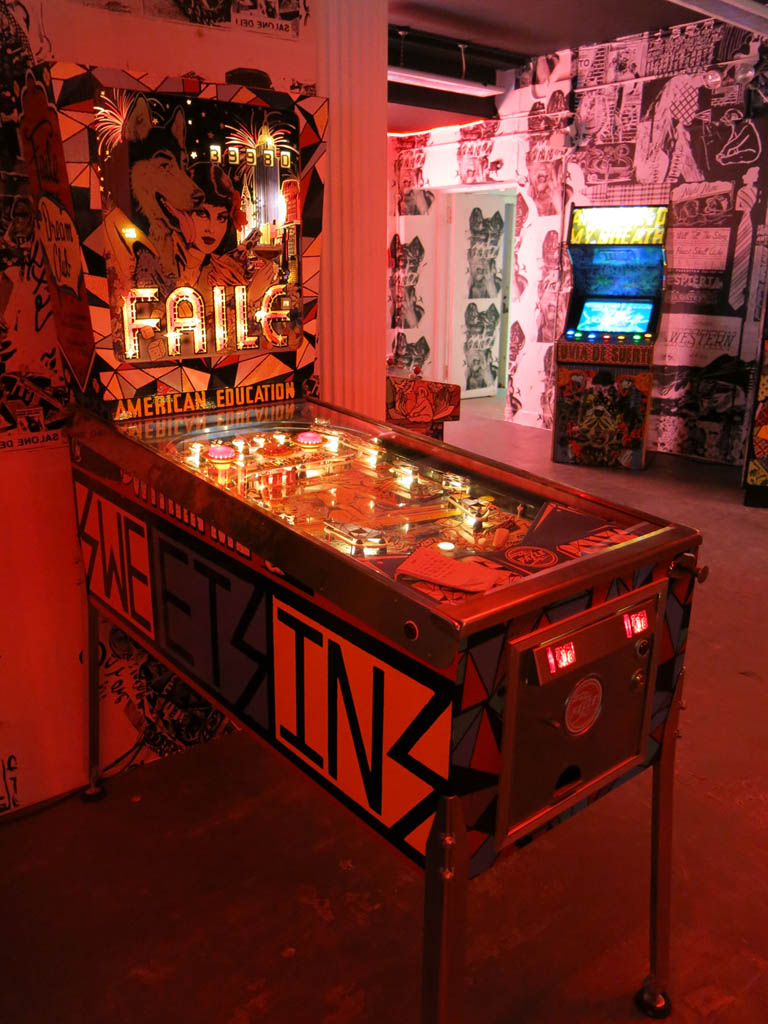 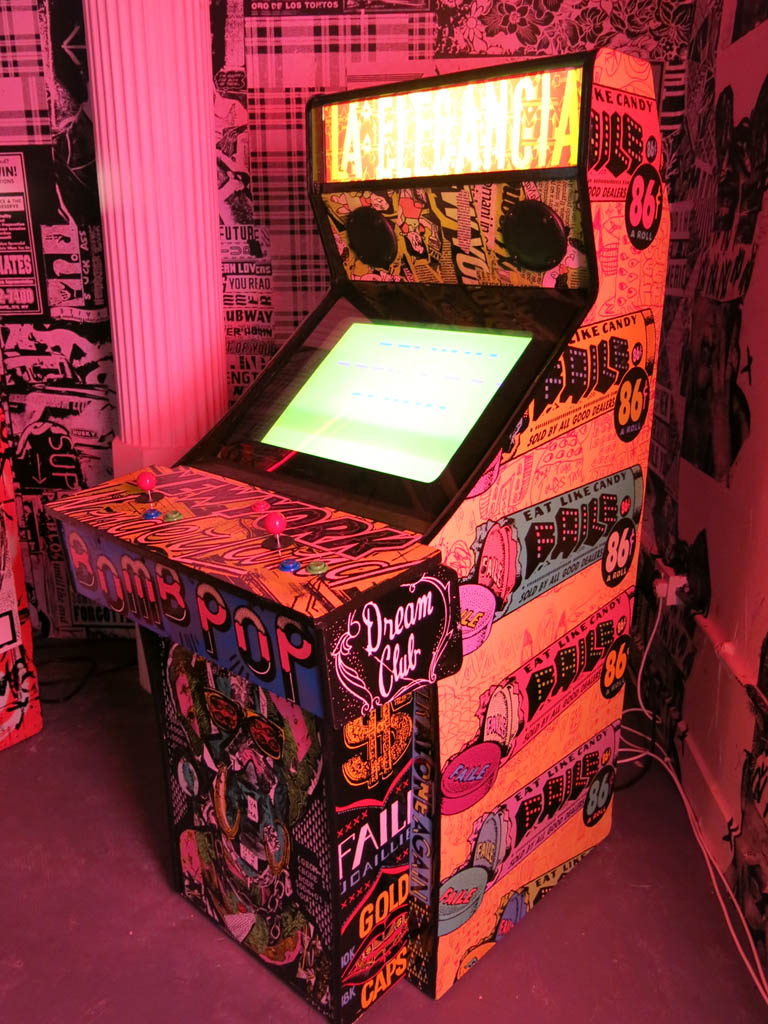 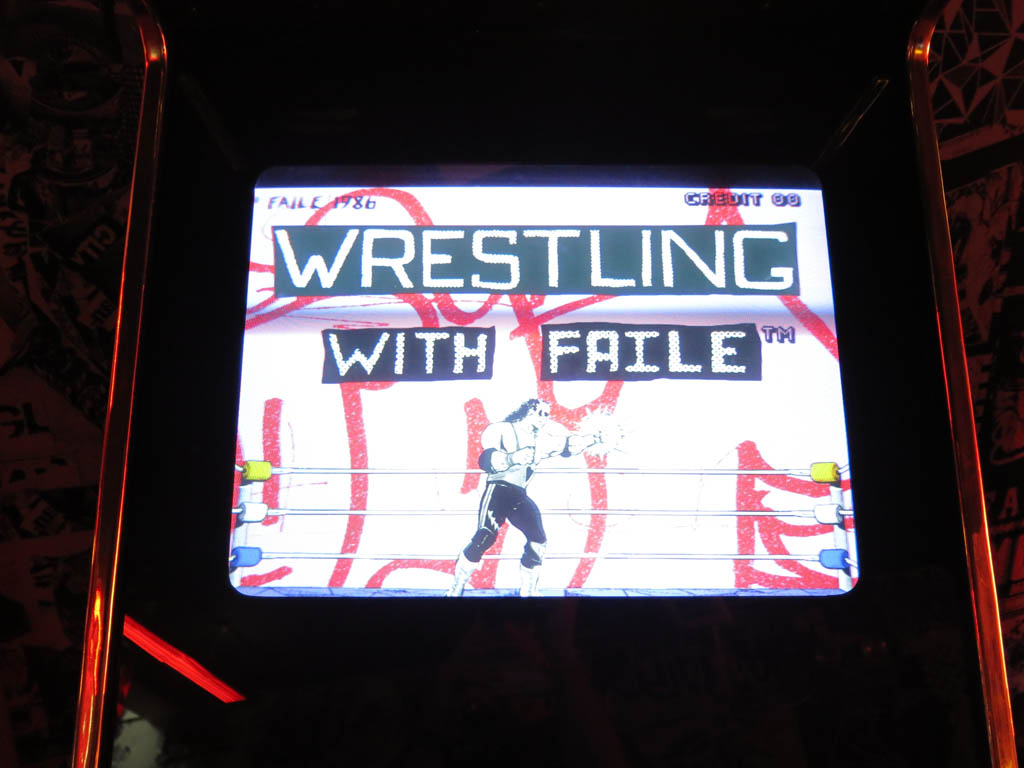 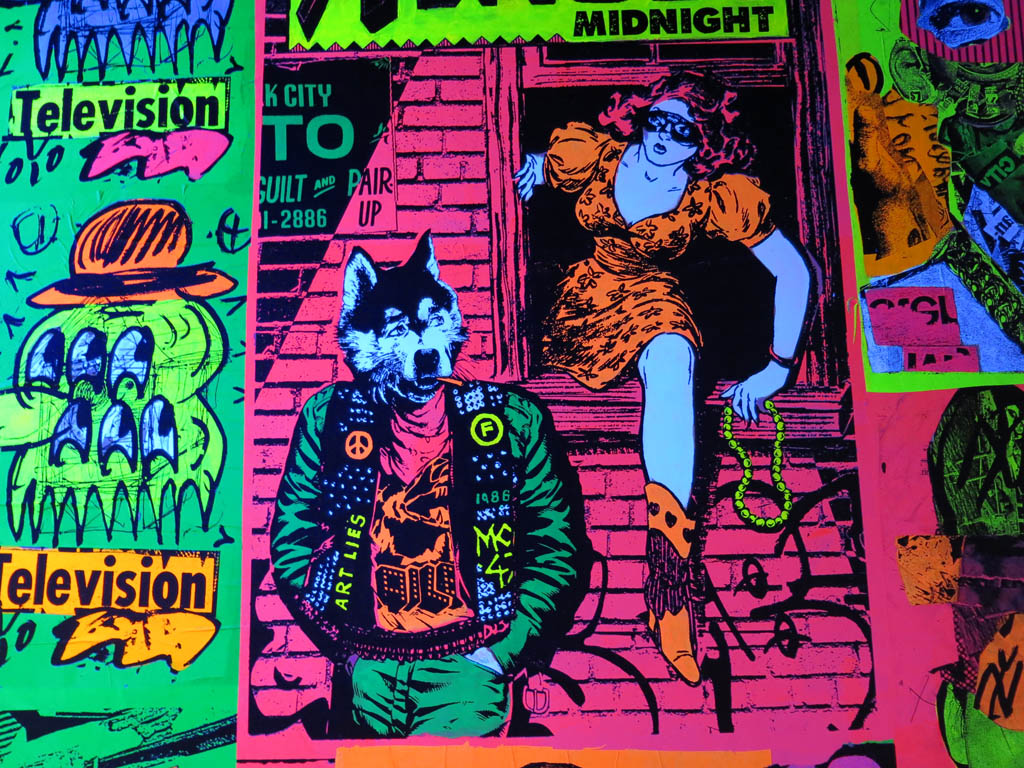 In fact a cabinet like these would be awesome in my house! Not sure what Kate would say though… 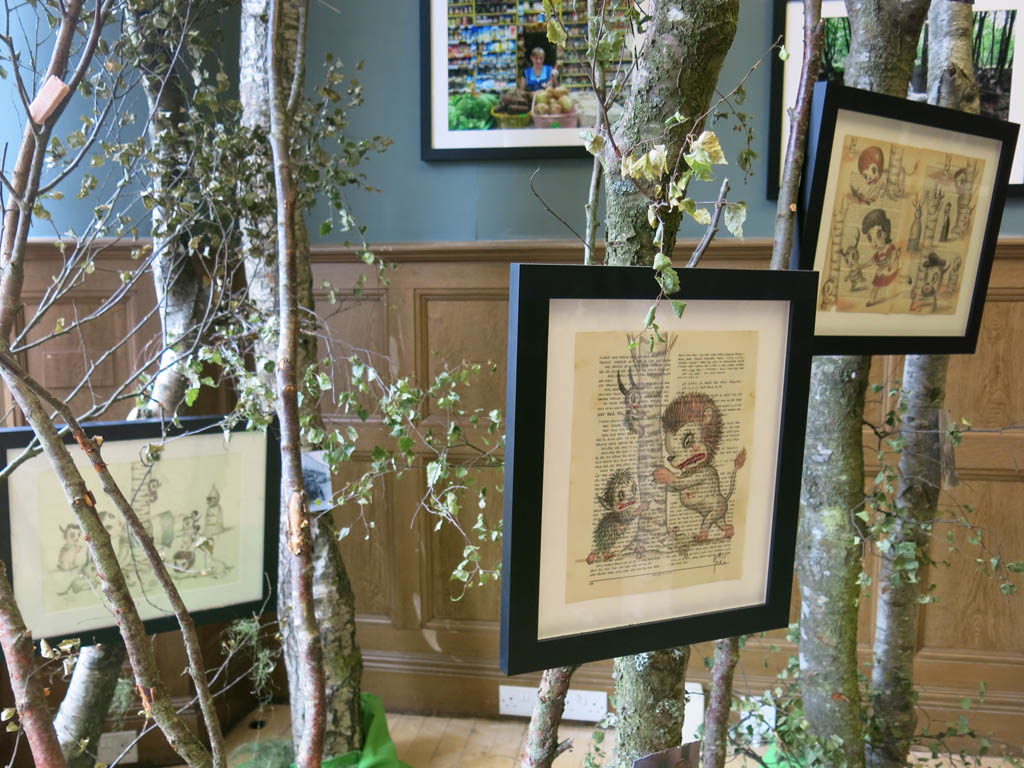 baseman in the trees

It was then some more exploration around the building to find the Gary Baseman exhibit. Called Mythical Homeland, it was semi-autobiographical, and was set up amongst a small makeshift forest. It added to the intrigue of it all, and the work was quite cool, especially that done on the book pages. 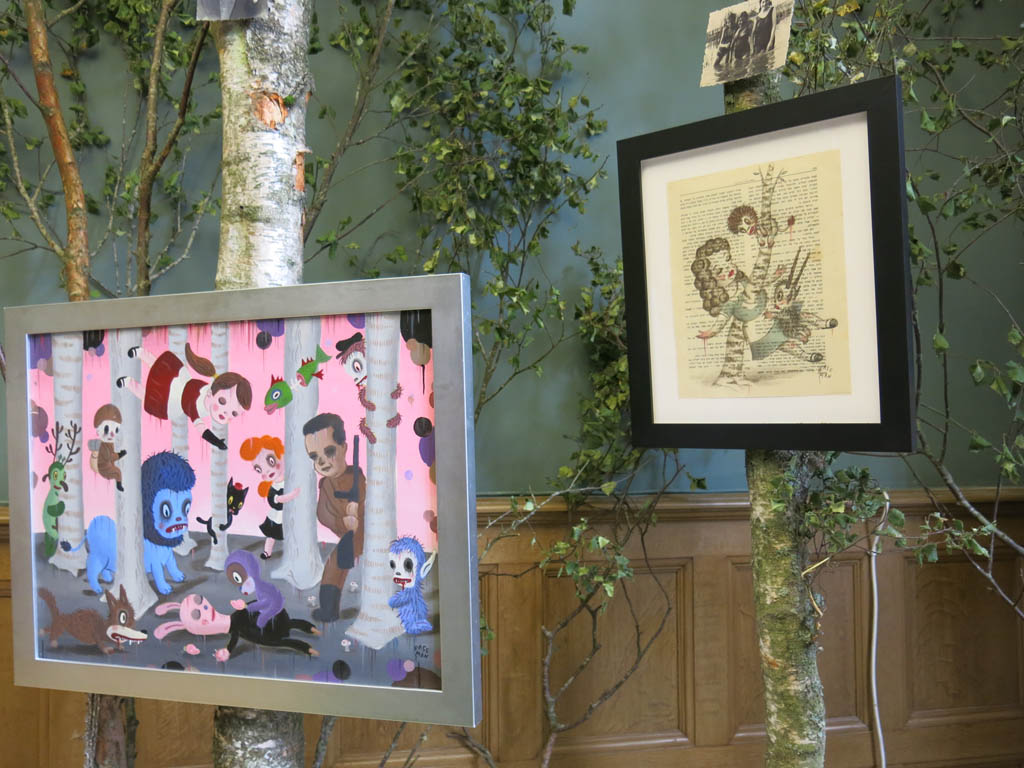 Mr Baseman himself was also floating around, however, he was being kept busy with some hardcore fans, so I decided to leave him be.

We still had a couple of hours until the tattoo so it was time for some food. I had organised this to pass a pub that I had caught eye of their menu the previous day, and saw something I just had to try. Yep, of course it was the Haggis Balls in Beer Batter! 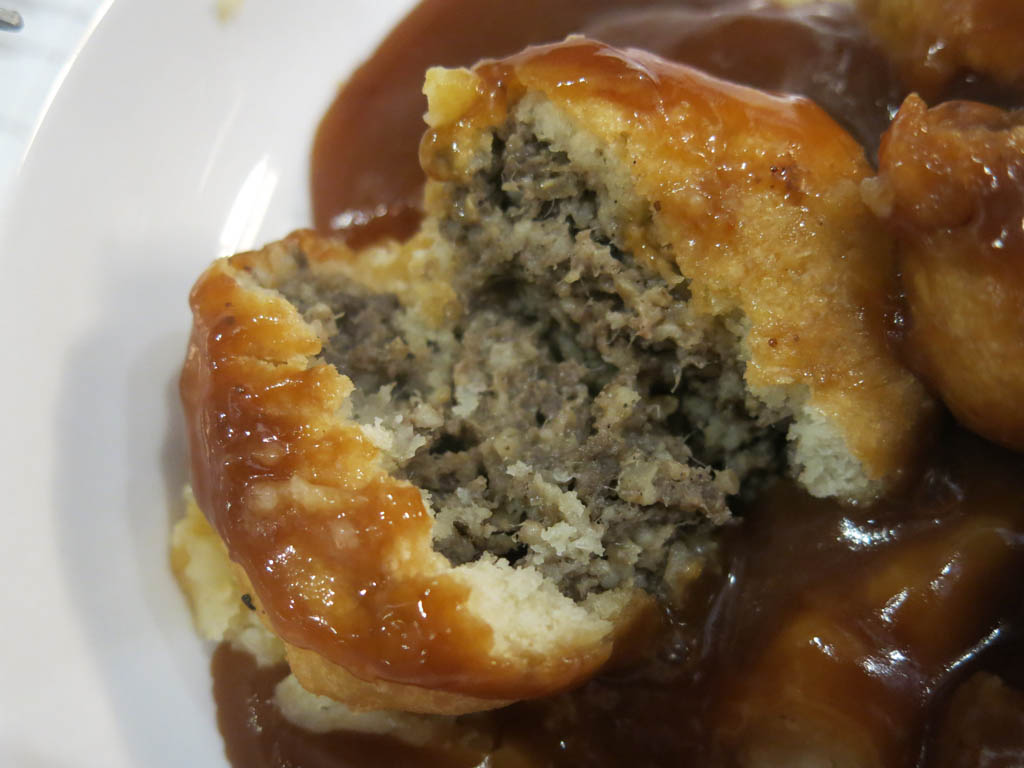 So in no time at all, we were seated and I was ordering a hearty plate of the haggis balls. The plate arrived and it looked delicious, with the haggis balls on top of a nice gravy and mash. So I broke one open and… delicious! Mmmm…. they were indeed tasty. You know I am not sure I know completely what is in haggis, but really, I don’t have to know, because it tastes great and that’s all that matters!

With the clouds looking ominous, we made our way back to Edinburgh Castle for the tattoo. With the stadium seating looking much more full than yesterday, we took our seats and waited for the festivities to start. Thankfully, the rain was keeping at bay, so we kept our fingers crossed that it would stay that way. 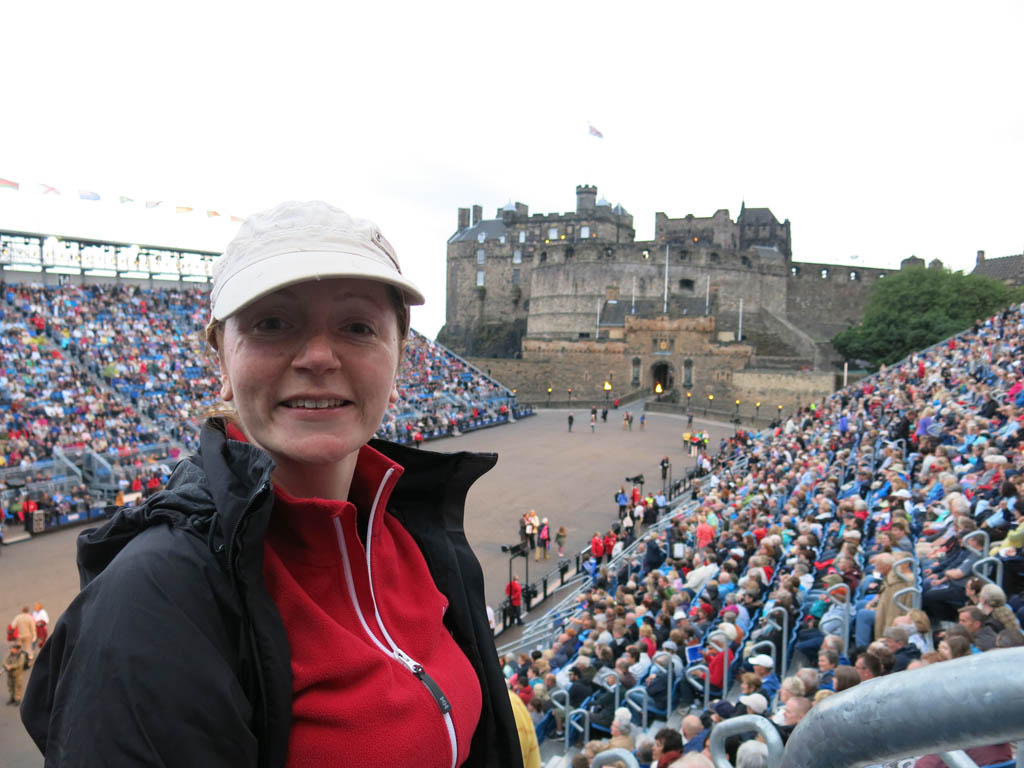 With a bit of warm up of the crowd by our emcee (“Anyone from… Australia here this evening?!”), two fighter jets flew overhead to kick things off. 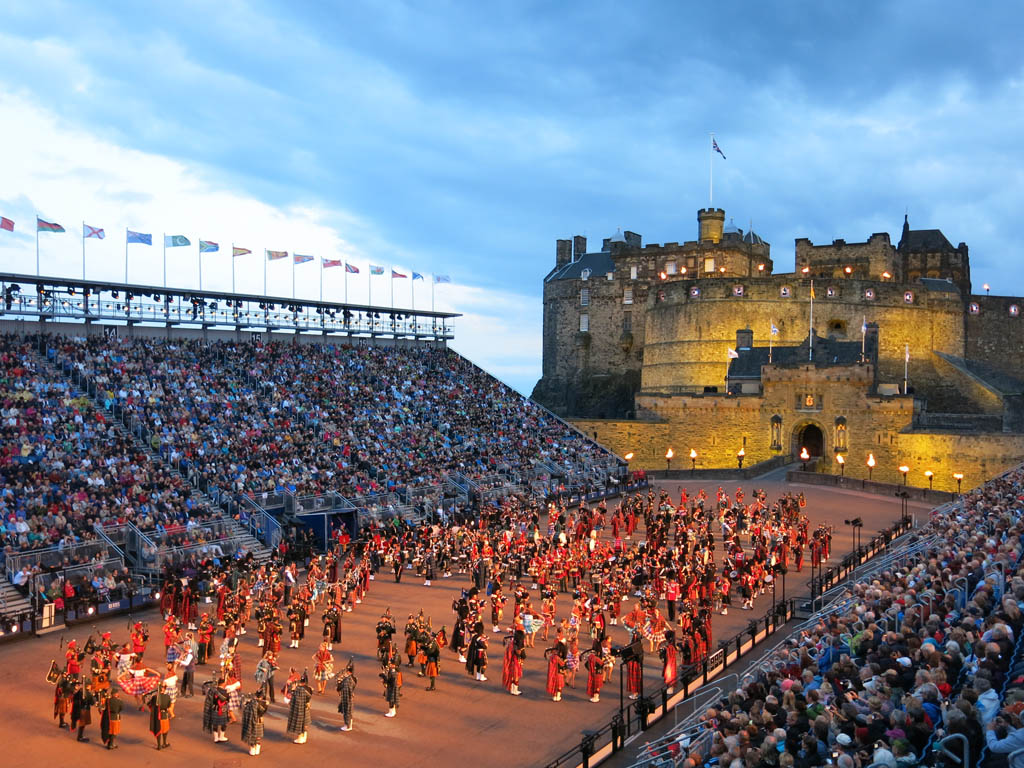 some highland dancing to kick things off

And we were away! To be honest, this was not my choice of activity, but it is undeniable that the fighters flying overhead, the bagpipes starting, and the cannons going off all gave me goosebumps. As far as spectacle, this has it. 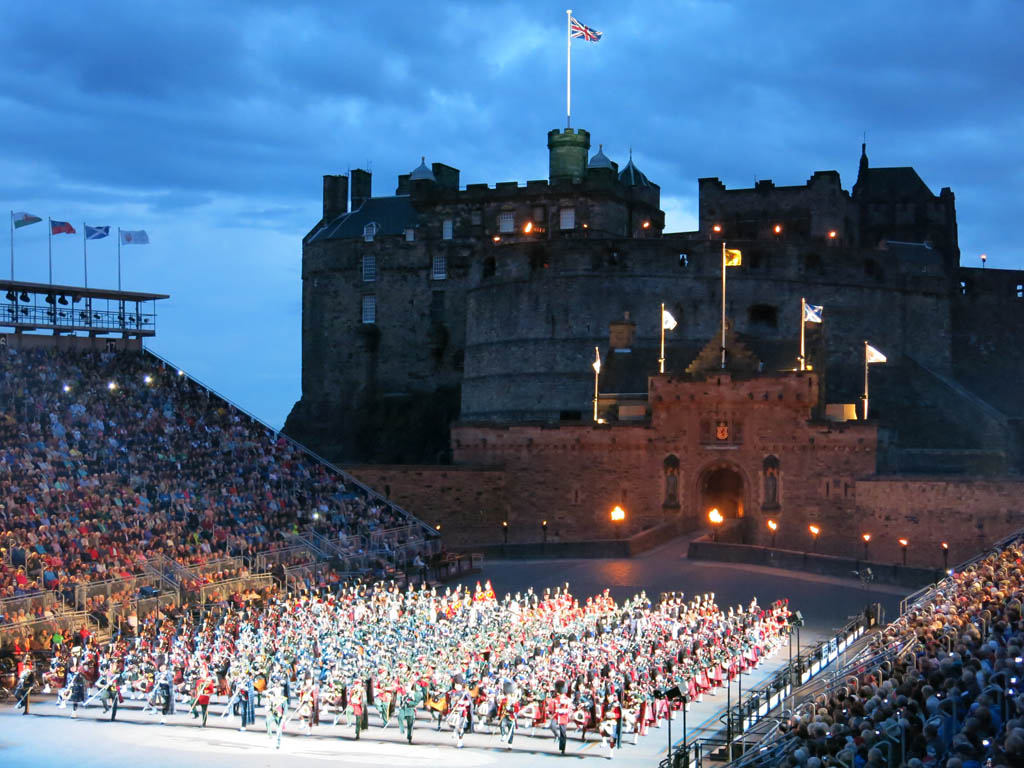 Now I haven’t watched an Edinburgh Tattoo in years. My dad watches them all the time, and I saw many on TV as a youngster, but had not seen one in recent years, so in some respects was not sure what to expect besides lots of bagpipes. What followed was much more international than I remembered, as after the very Scottish start we did a tour of the globe, with lots of performance by friendly nations, including our beloved Oz. 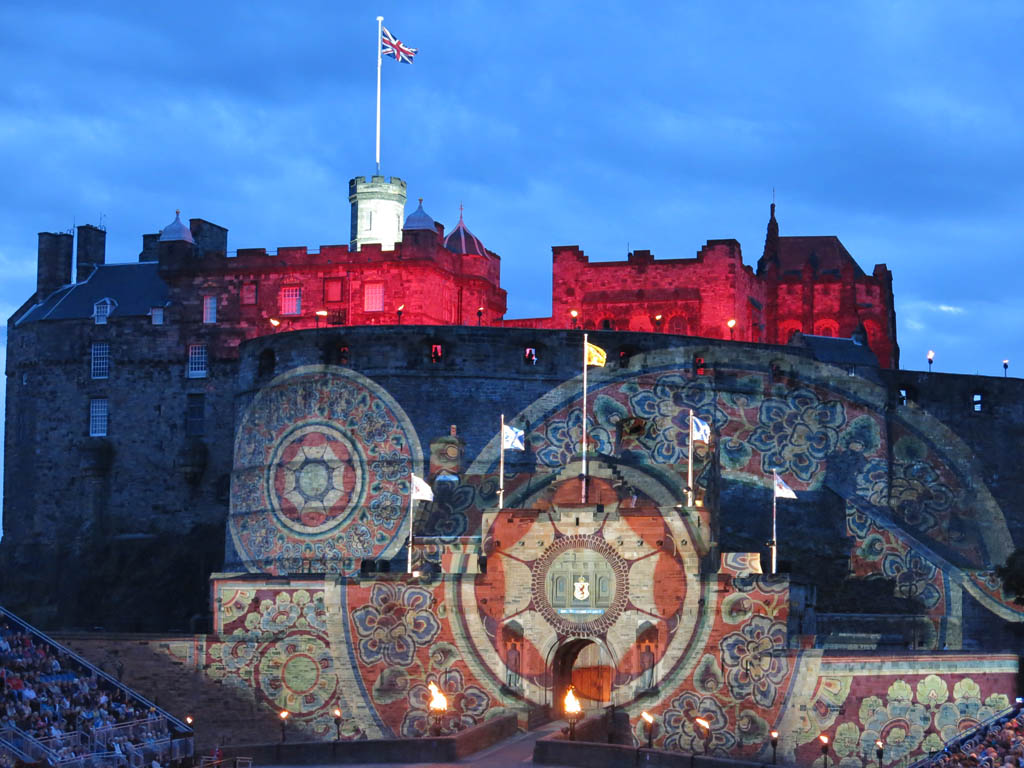 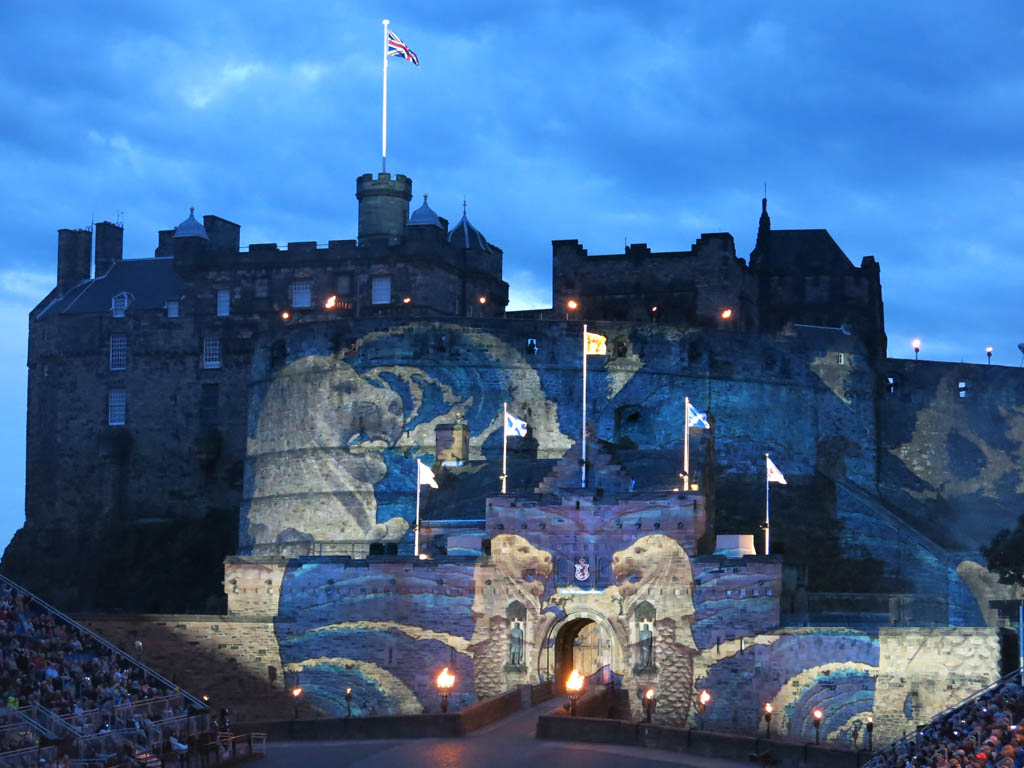 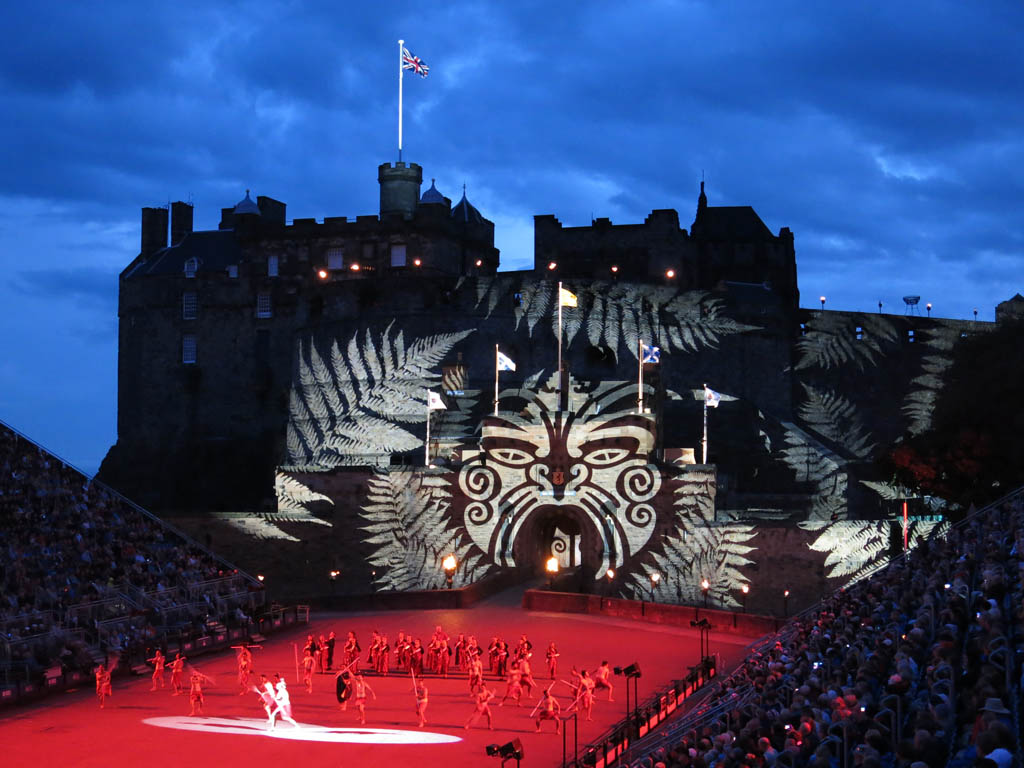 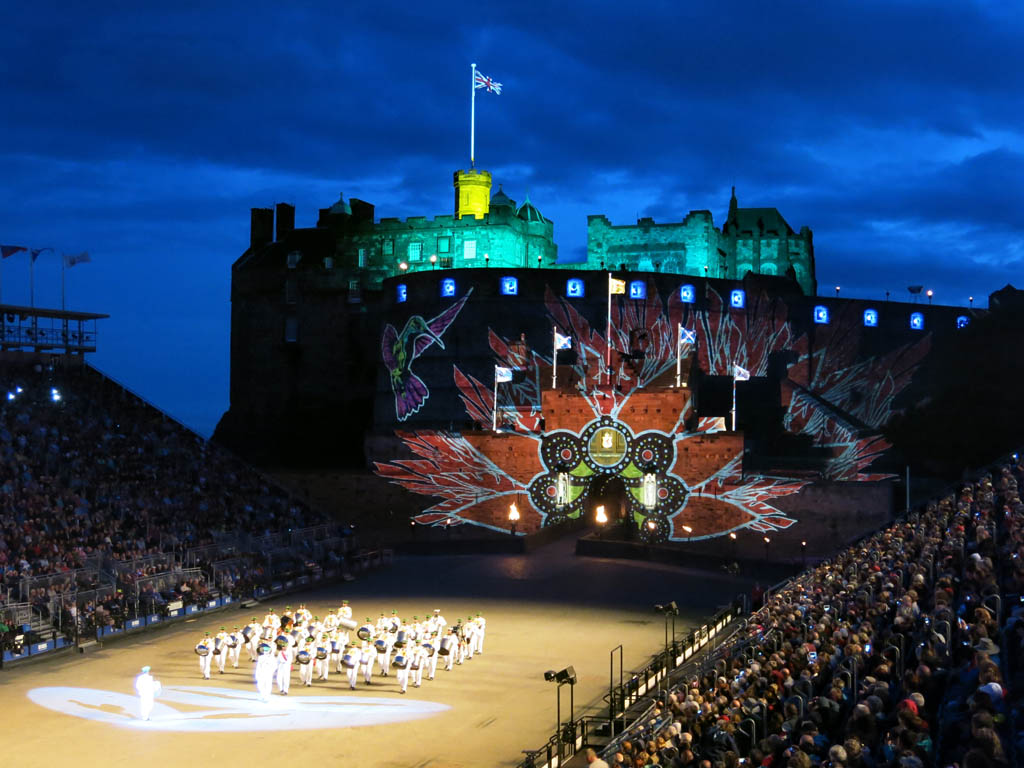 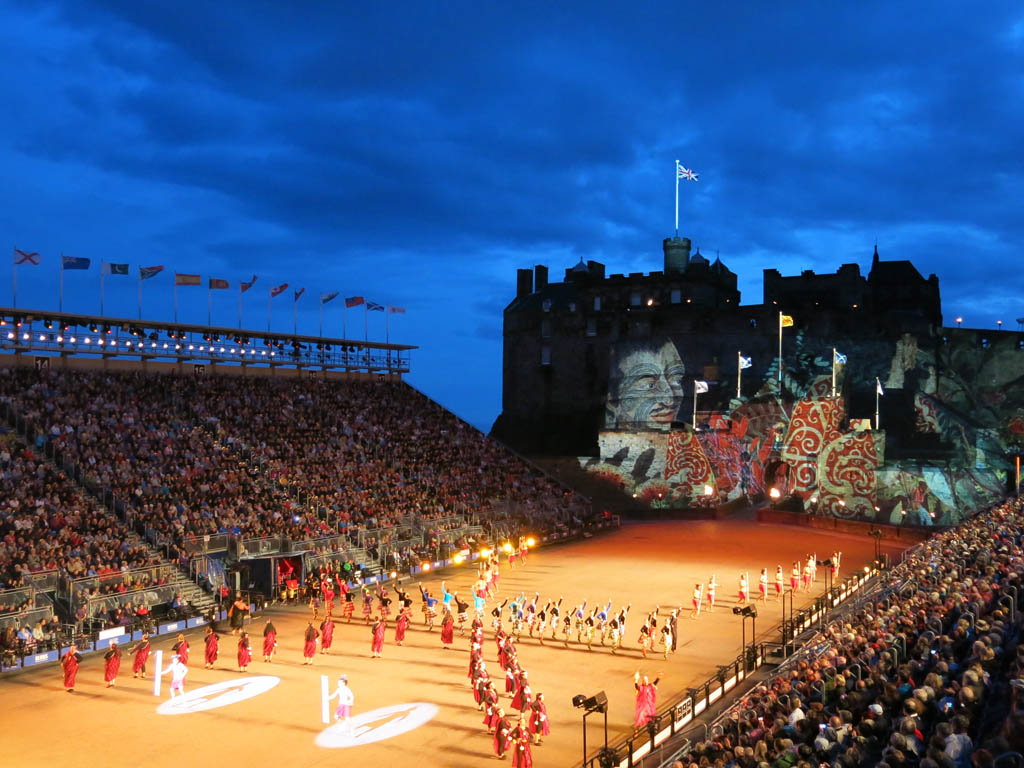 The castle would be lit up in recognition of the performers which looked great. Best in show would have the be the Kiwis, wth both a strong Maori and Highland dancing contingent, and also the world’s only steel drum marching band… yep Trinidad and Tobago brought the reggae and disco (I heard some Boney M in there) to the castle. Good times. 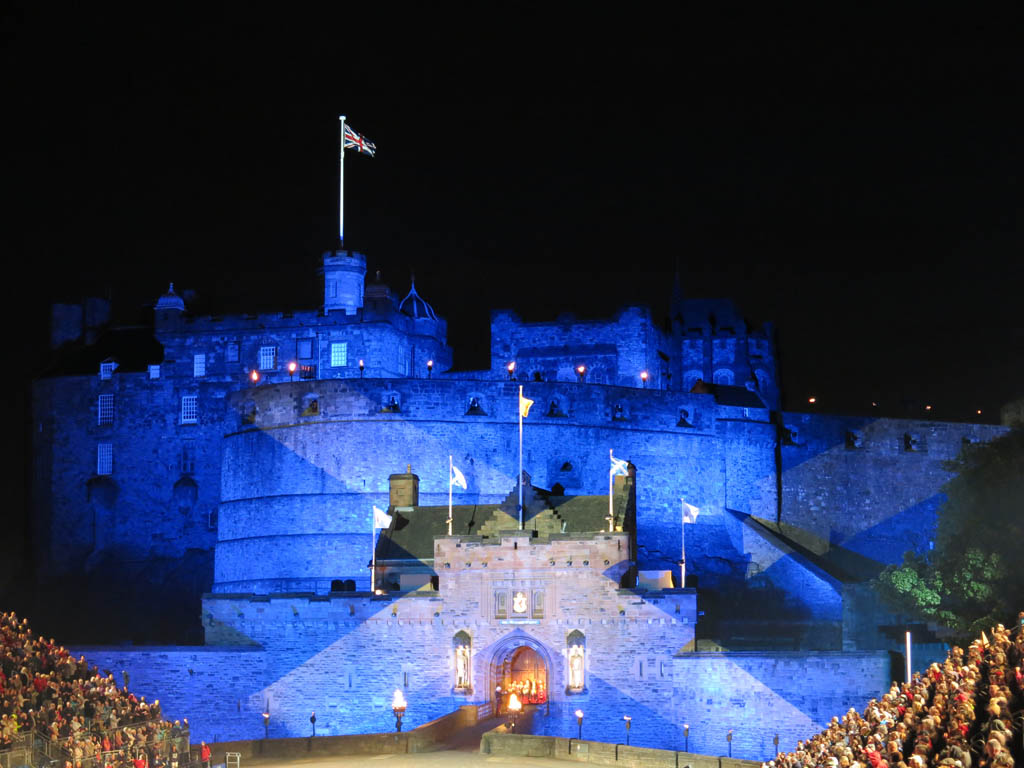 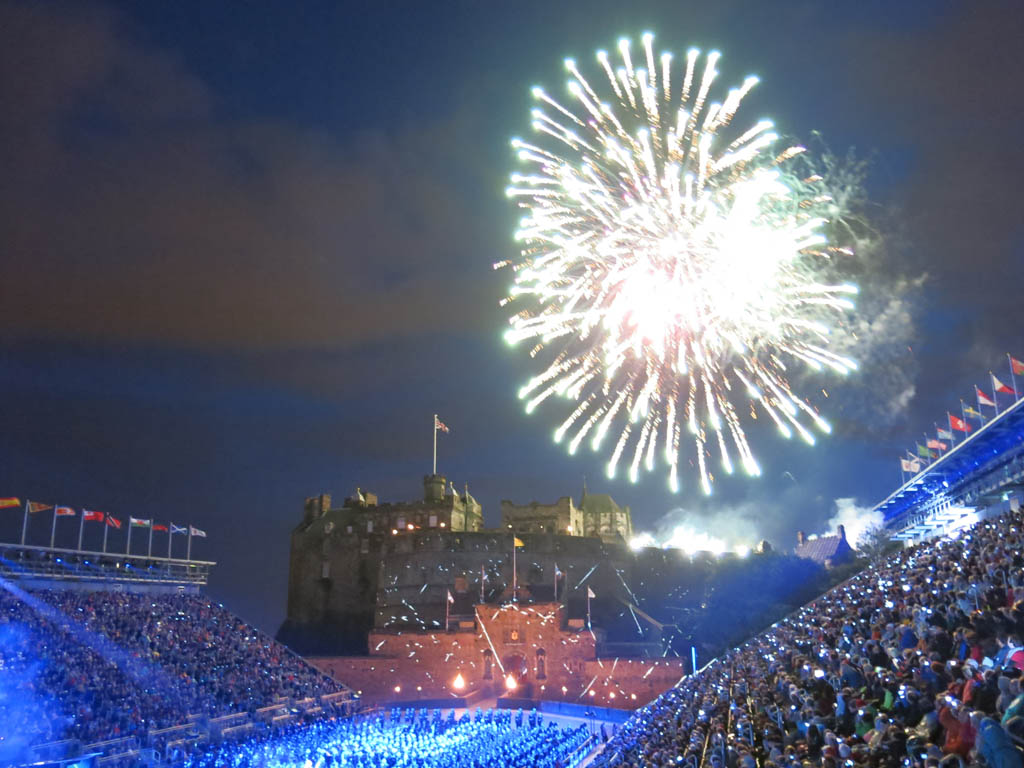 it ends with a bang

But it is the Scottish that own the tattoo and with the full flight of bagpipes happening, it is pretty cool. So while I didn’t go intending to swept up by it all, in the end it is pretty hard not to. Kate still might have trouble popping some bagpipes in the car stereo though.