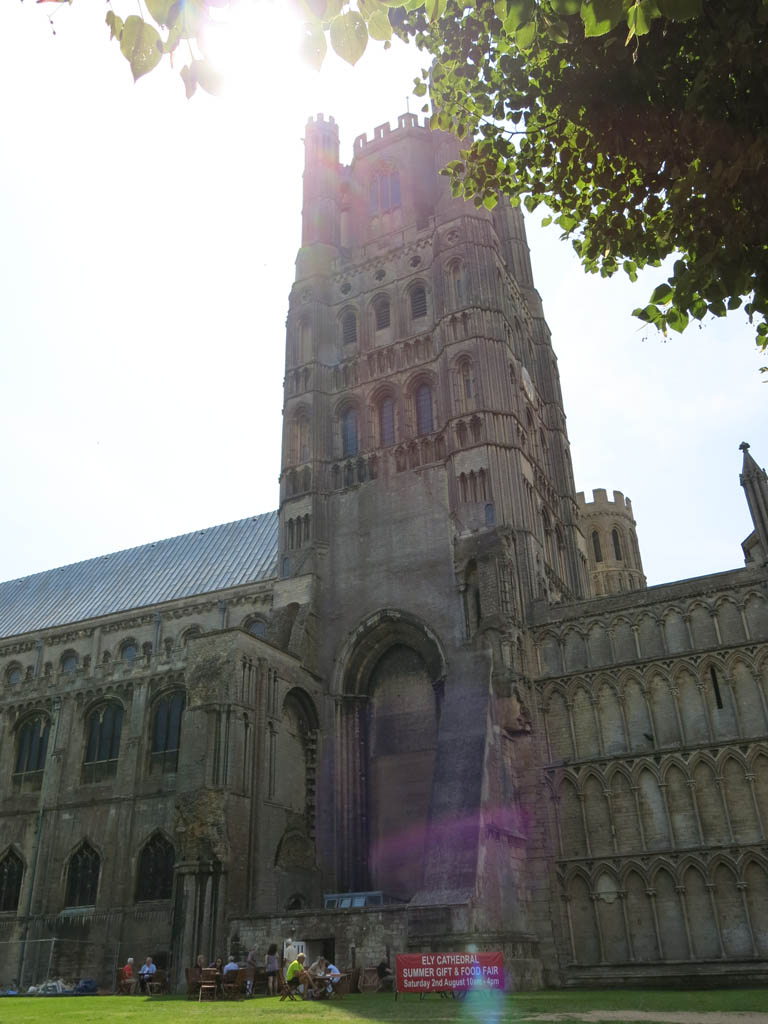 no, we are obviously not at the beach yet

The weekend arrived and it was time for more adventure! This time believe it or not it wasn’t back to London, rather we were heading east, toward the Norfolk coast for a change of scenery. To the beach! In England! Who would have thought! But it was also the locale to catch up with some more of Kate’s family which was as good an excuse as any to head to the coast.

Rather than head all the way over in the one day, our destination was the small township of Ely. Ely is famous for a couple of things. Firstly, it has a very well renowned cathedral, that whenever I mentioned to anyone here at Warwick that we were heading to Ely, they always said “to see the cathedral?”. They also added Ely’s second somewhat famous attraction “… and Oliver Cromwell’s house?”.

Off we headed, with our trusty GPS Emily to lead us on our way. No, we didn’t name the GPS, rather, she was set to the “Emily” setting for voice, so Emily she came to be known. As Kate was doing all the driving (being the only named driver), I formulated my own quite fun game with Emily which was for me to use our UK map book to try and work out which way she was going to lead us (I know I know… I am speaking about her like she was a real person in the car… well part of the fun/joke was that we started to speak about her as if she was in the car with us). I probably got much more enjoyment out of this game than any normal person would and Kate was just spending half the trip laughing at me as I would get firstly exasperated at her choice of route, and then resigned to the fact that it probably was the best way after all. 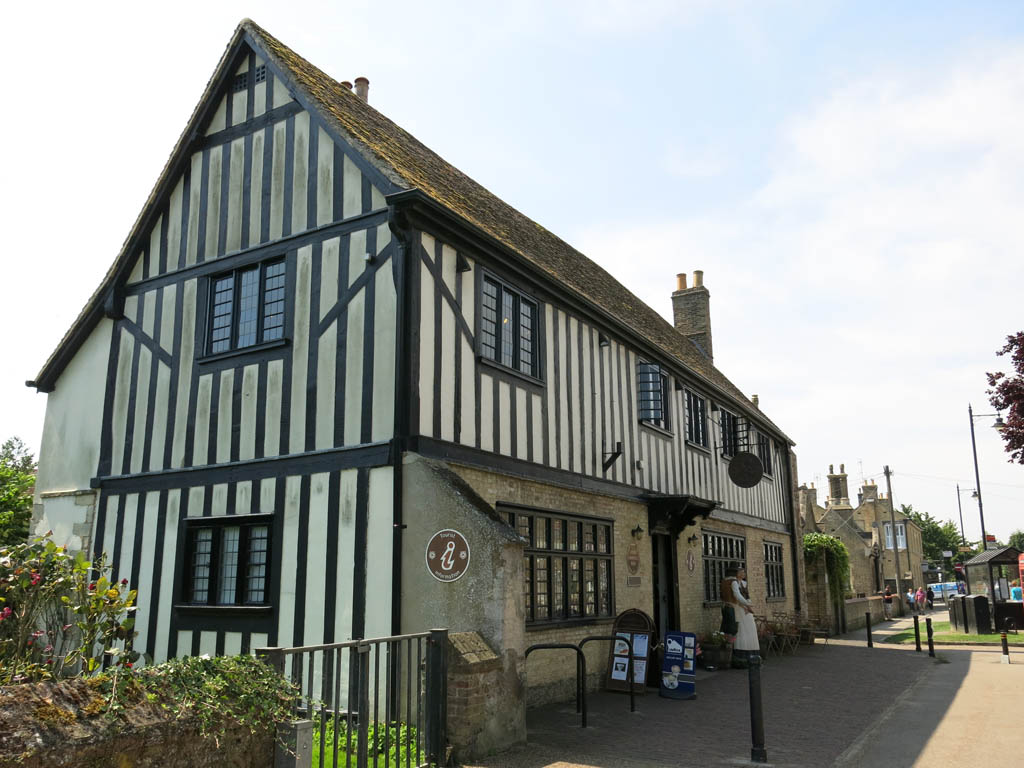 Anyway in just a couple of hours we arrived at bustling Ely. It seems lots of folk like it as a destination on a weekend as the town was busy with people wandering the centre of town. The first of the (in)famous sites we saw was Oliver Cromwell’s house. Apparently he lived here for a bit in the mid-1600’s. 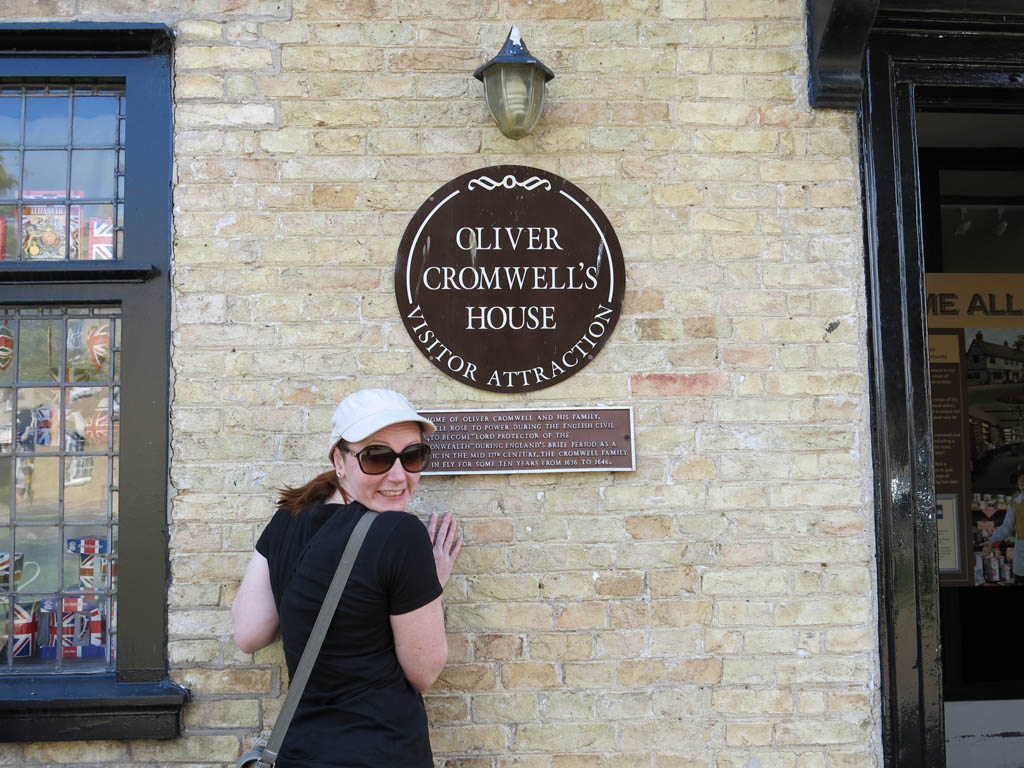 kate all excited she was at cromwell’s house (well, sort of) 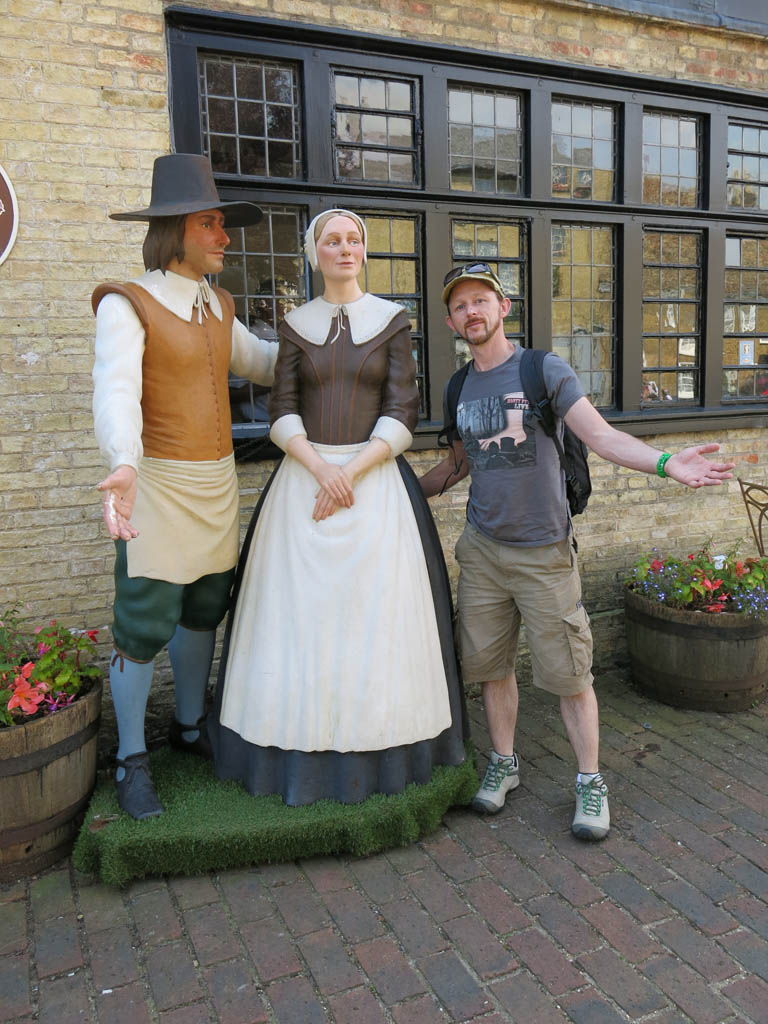 me trying to blend in with the locals

The house looked quaint enough. With a somewhat pricey entrance fee, we were not convinced it was really worth too much of a look. We found it much more interesting to just take some cheesy photos outside and that was going to do us. 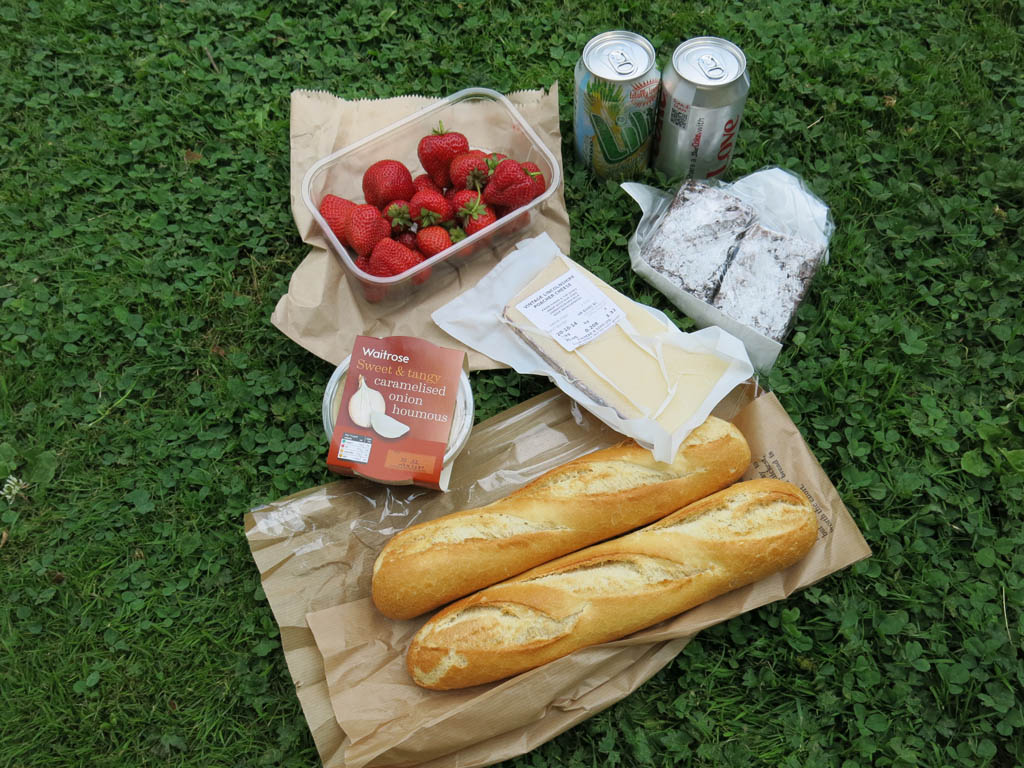 the best kind of lunch

In just a few minutes walk we came across the very impressive Ely Cathedral. The cathedral towered above everyone, but we decided to leave that until later and wander the farmers market for a makeshift lunch to kick things off. With our nice selection of local bread, cheese, fruit, and brownies, we found a nice shady spot in the cathedral gardens and enjoyed some lunch. Mmm… sometimes simplest is the best. Cheese tastes best when it has come straight from the cow (well, maybe with 18 months of aging in between) and the brownie has come straight from the oven.

Rather than head back into the cathedral, the sunny weather was too good to be indoors, so a general wander of the town was in order. We headed for the waterfront… no, we were not yet at the beach, rather Ely is on the River Great Ouse, and it seemed everyone was happy to be perched on the banks, enjoying the music in the park. The music was OK, but our leftover brownie was even better. 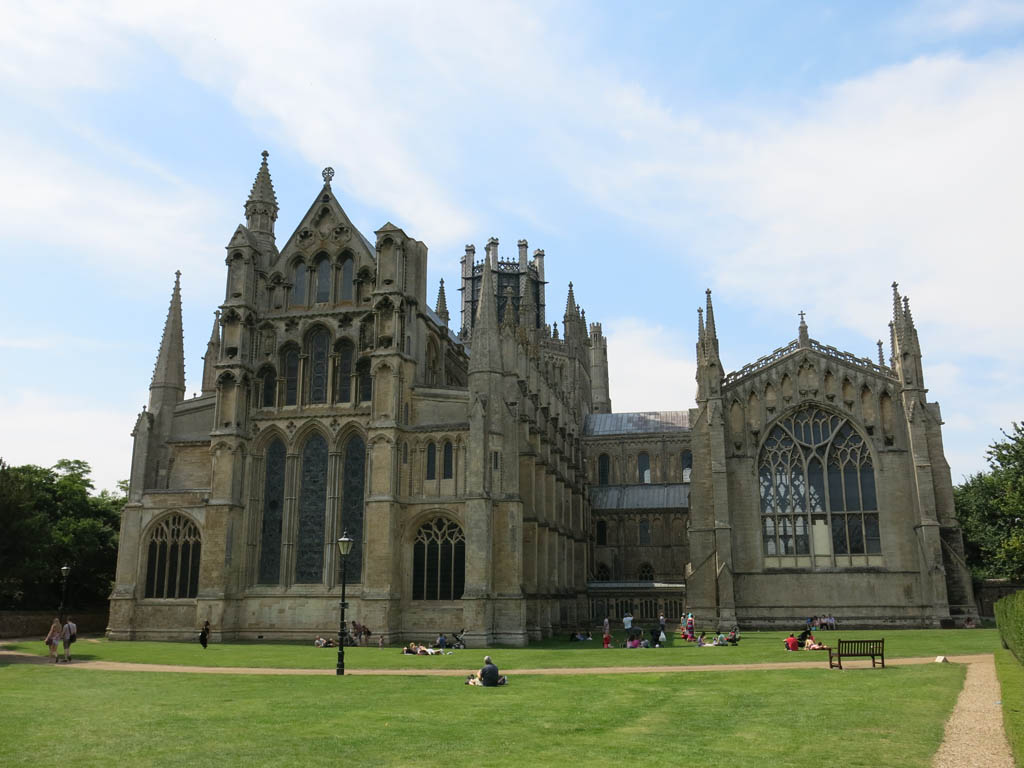 So with a wander via some antique shopping for Kate, we made our way back to the cathedral. I have seen quite a few now in my time travelling Europe, but this one was pretty impressive. It was begun to be built 1000 years ago, taking several centuries to finish. But that time shows, as for a small town, it is a VERY impressive cathedral. Inside the stained glass was amazing, and just the sheer size of it was pretty incredible. 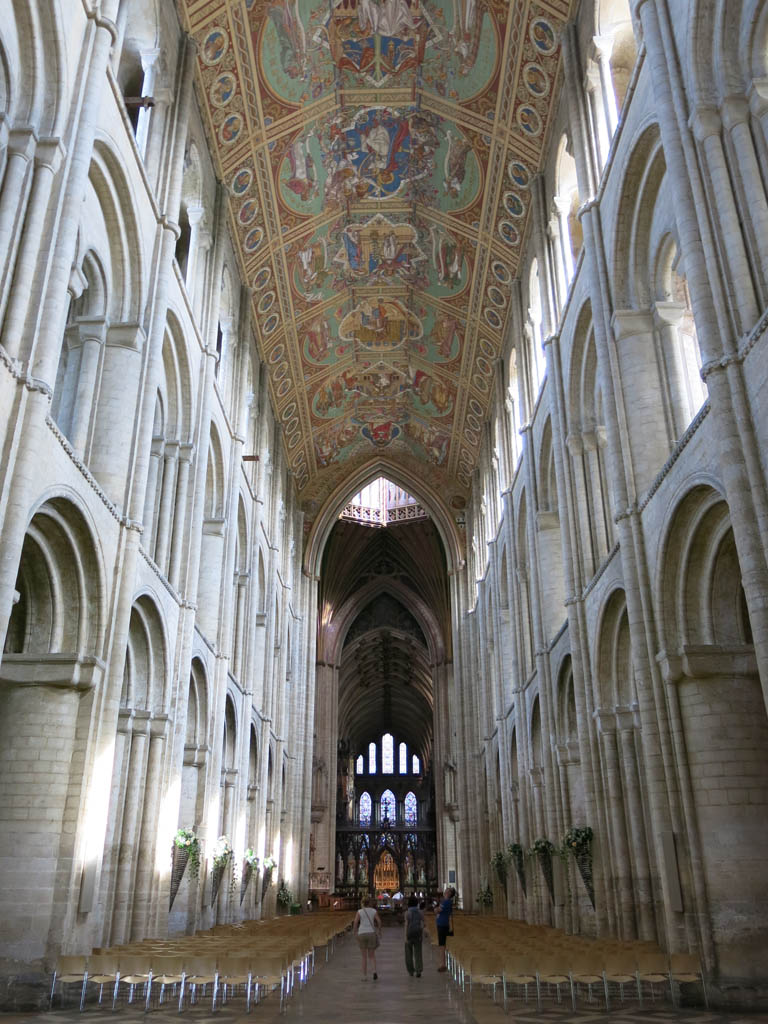 that is one high ceiling 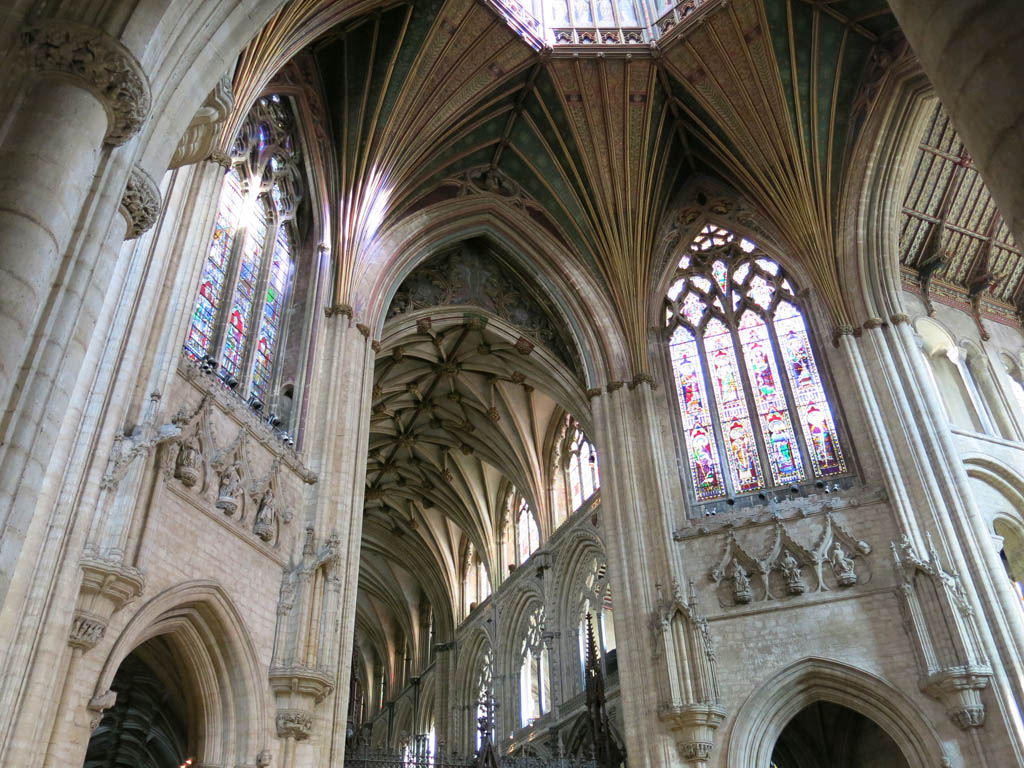 I always fixate on the roofs and the intricate work on them. It begged the question with Kate, “how on earth do they get up there and clean it?!”.

While wandering around I came across the resting place of this dude. I should have taken a closer look at who he was, but I couldn’t resist taking a photo. He looked very comfy resting there. I guess if you are going to be there for eternity, why not perch yourself all comfortable like to say hello to everyone.

Before we knew it the cathedral was close to closing up for the day and we decided to head to our lodgings for the evening, in the even smaller township of Little Downham, and the local hotel The Anchor. It was pleasant, and we spent our night relaxing with a sneaky cider.

Next morning after brekky, it was time to head further north-east-ish to hit the Norfolk coast. Our first stop was the small town of Holkham, where there was a beach (a real beach!) and a historic house called Holkham Hall. But given it was so nice, we decided to head to the beach first for a wander. 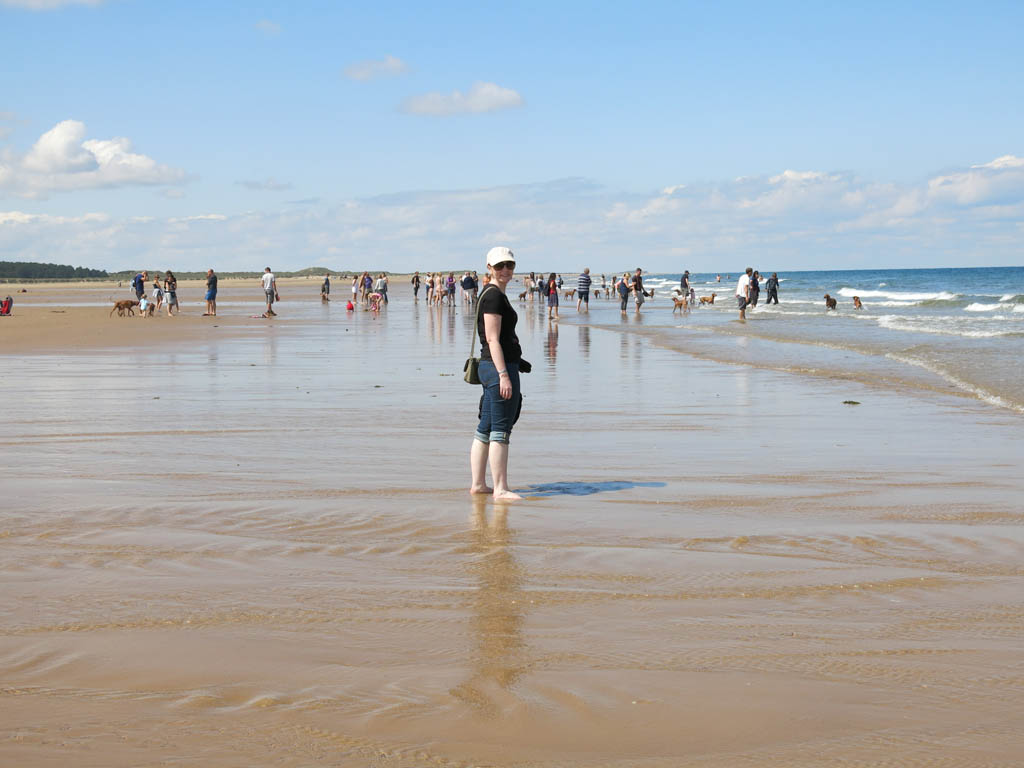 It seemed that was the thing to do, as there was steady streams of people making the walk down to the beach. Being low tide it seemed to take forever to reach the water, but when we did it was quite lovely. Certainly not the same beach vibe as back home (or most places for that matter), even though it was warm, it seemed being at the beach was more about sitting on the beach, or playing with your dogs, or walking, than swimming. In fact there was only a handful of brave souls in the water. Which was surprising, as the water was quite pleasant in. 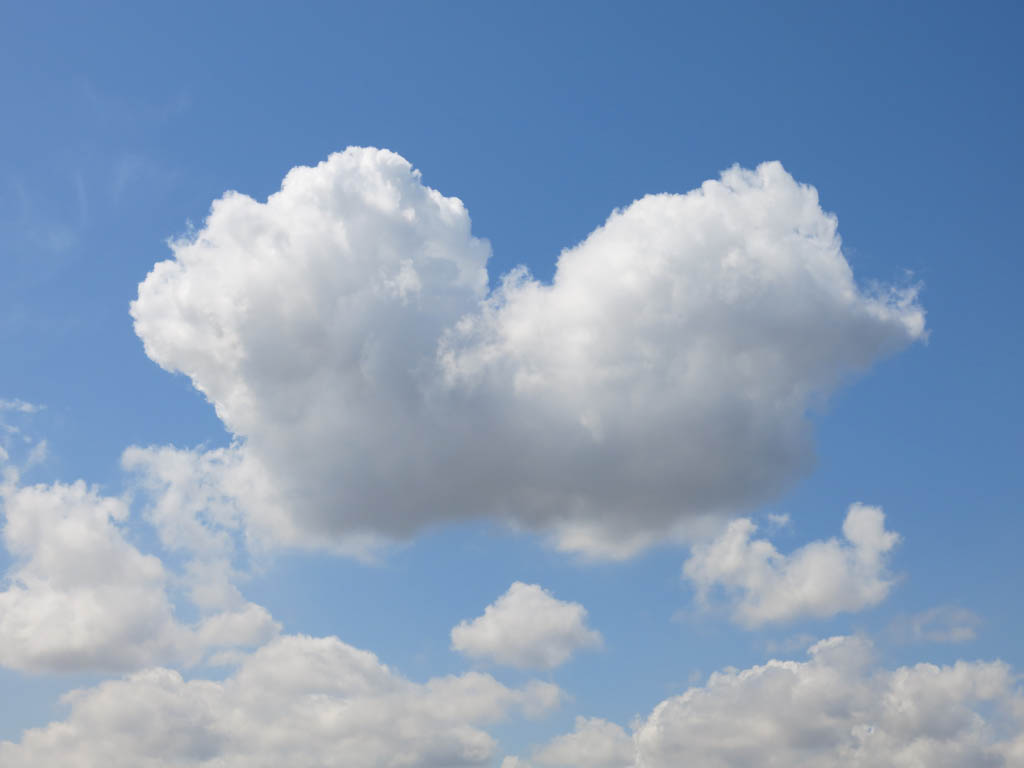 proof that you do get beautiful blue sky here in england

We ended up strolling for a couple of hours, and in the end decided not to visit Holkham Hall. Rather we wandered back to the car and headed to the nearby Blakeney Hotel for a catch up with some more of Kate’s family.

Again, it was a lovely way to spend the day… catching up with family that we don’t get to see very often. The afternoon was spent chatting away, and having some drinks to keep cool.

In the blink of an eye the day was drawing to a close. With a few us needing to drive a few hours, it was time to say farewell fr the time being, and head back to Warwick. On the way Emily and I battled our best routes. But as always, she won.