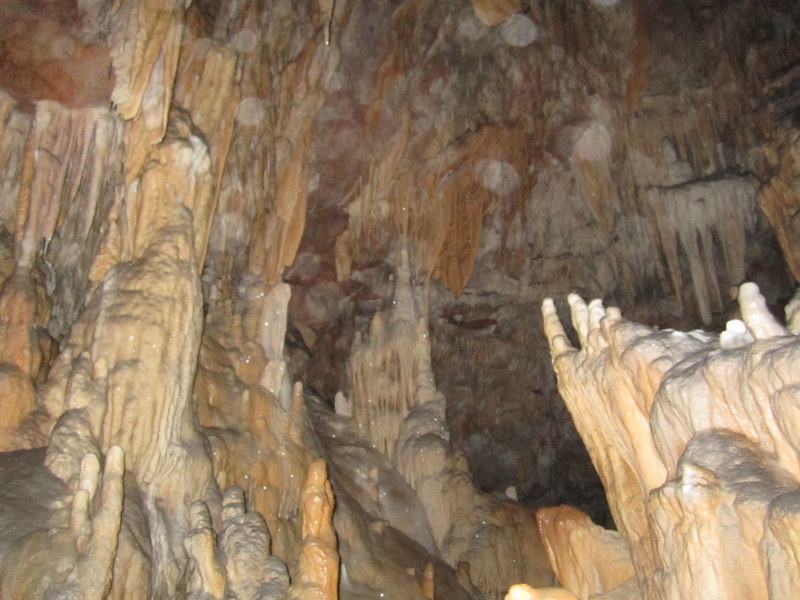 In the bowels of the earth

I was pretty excited for today. It is not often you get the chance to go exploring caves (aka Spelunking), but in this case, I was not just going to be having a casual wander in… this was going to be 5+ hours underground in the middle of a huge and tricky cave called Crystal Cave. We were told to be prepared to come out filthy, so in my cargos and hiking sandals, I met the group and away we went.

After an hour and a half we arrived at the entrance to the jungle. It was not going to be as simple as heading straight into the cave. Rather it was a 45 minute jungle hike to get to the entrance. Talk about feeling like Indiana Jones! 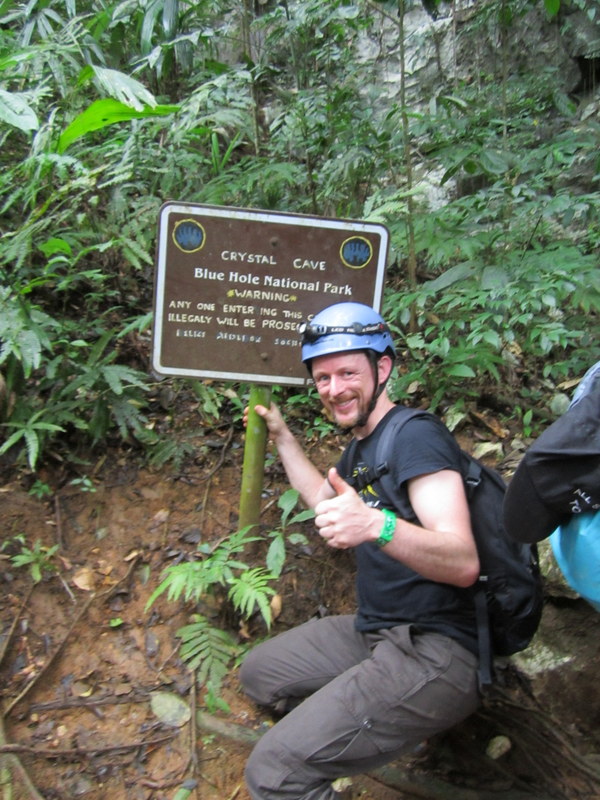 A little muddy, but full of energy

So we all got suited up in our helmets, loaded heaps of water (it was very hot and humid) and in we trekked. We were all being careful not to get too muddy on the way in. The guides laughed and said we wouldn’t care by the end. But still, we trekked through the tough muddy path for 45 minutes to get to the entrance.

With our helmet lights on, it was on to the end of a rope and dropping into the cave. Oh boy… this was going to be crazy. 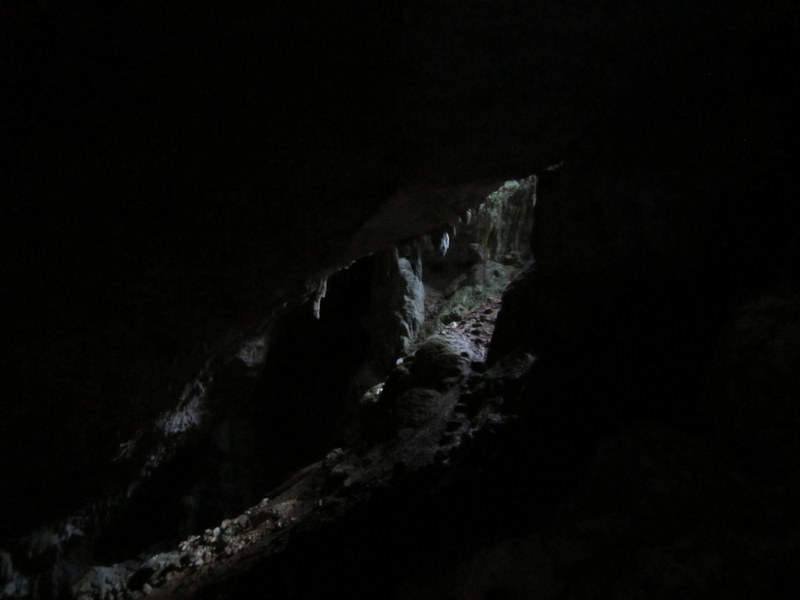 Looking back at the entrance

Just after we were inside, with still some small light from outside visible, we sat down for some food and to prepare for the next 4-5 hours that awaited. Since I had not done caving properly, I was not sure exactly what to expect. This was seen as the most difficult cave to explore. but what did difficult really mean? 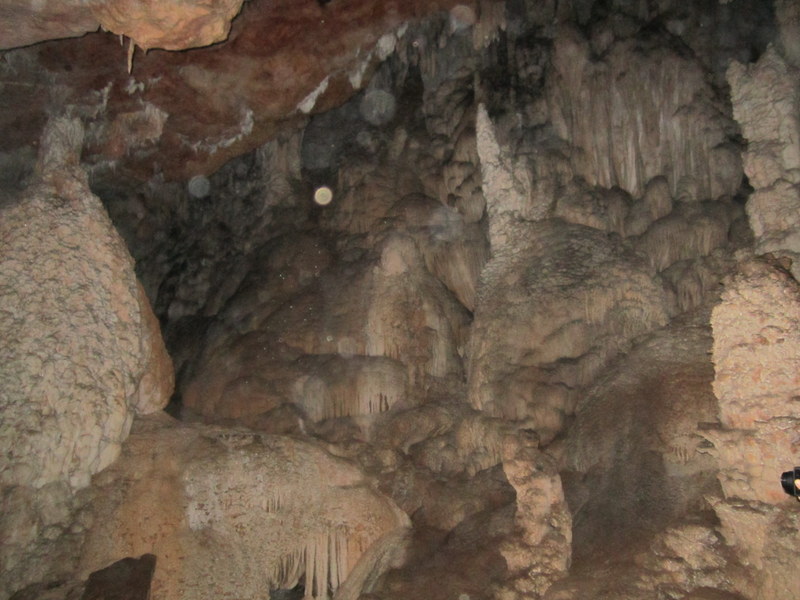 Every sight a wonder

Holy cow. It was tough. The conditions remained hot and humid, with the air getting more difficult the longer we went. In complete darkness, with only the headlamps of the 10 or so in the group, we had to clamber, climb, slide and squeeze our way through the cave, relying on our guide to help us and show us the path. At times the mind did not want to make some of the precarious leaps to get from one part of the path to the next, especially given the slippery conditions and what looked to be precarious drops. But our guide, Junior, was great, supporting us along the way. 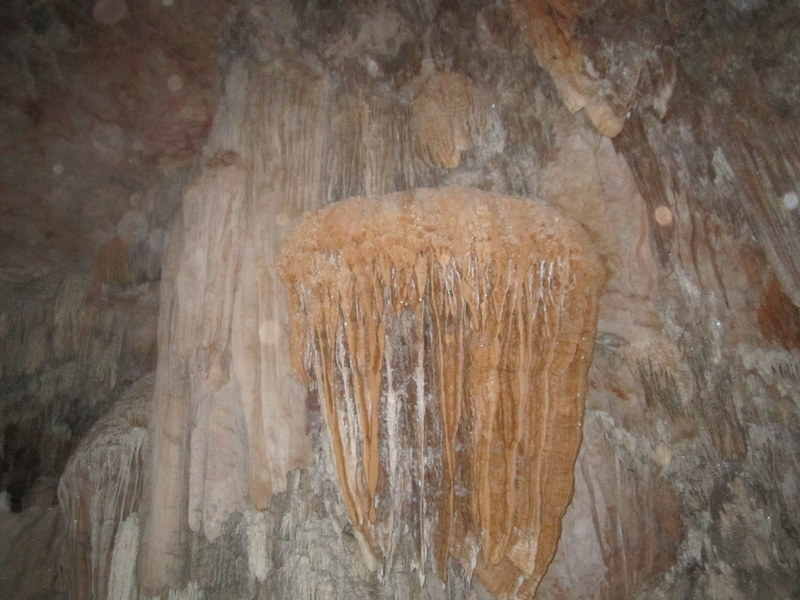 And what could we see? It was beautiful, with amazing formations everywhere. We were pointed out to different types of formations, how they came about and so on. 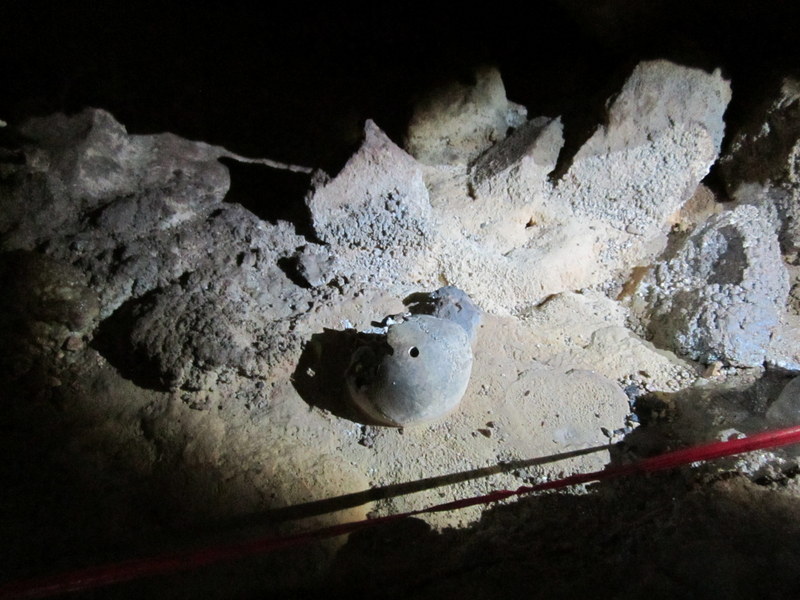 What was also incredible was that the cave was used by the Mayans, so throughout you would see broken pottery and even the odd human skull. If it wasn’t creepy enough to be in the depths of a cave, with no idea how to get out, just add human remains into the mix! 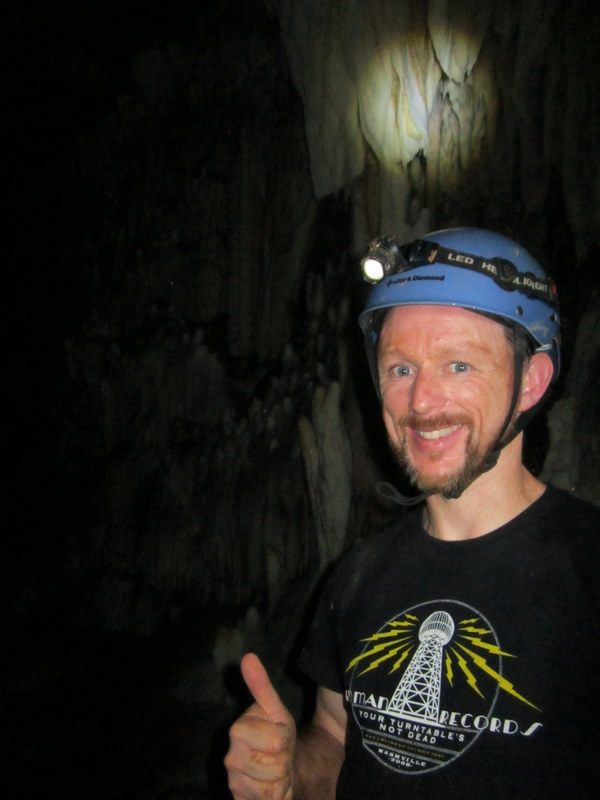 We kept going further down and down in to the cave. We were all getting tired and covered in mud as we went. It was amazing and challenging and tiring and scary all at once. You would be scared by some of the climbing but then amazed by seeing things you would probably never see again.

After about 4 hours we were in a huge chamber where we had an option. We could spend another hour of even faster and more challenging cave exploring to get to “Wonderland”… a small incredible chamber full of even more new formations, or head out. I was not sure. I was loving it, but was a little tired and remembered some of the difficult climbs I had to make, especially for someone 5 foot 6. But the guide said I was doing well, so bugger it… in I went! 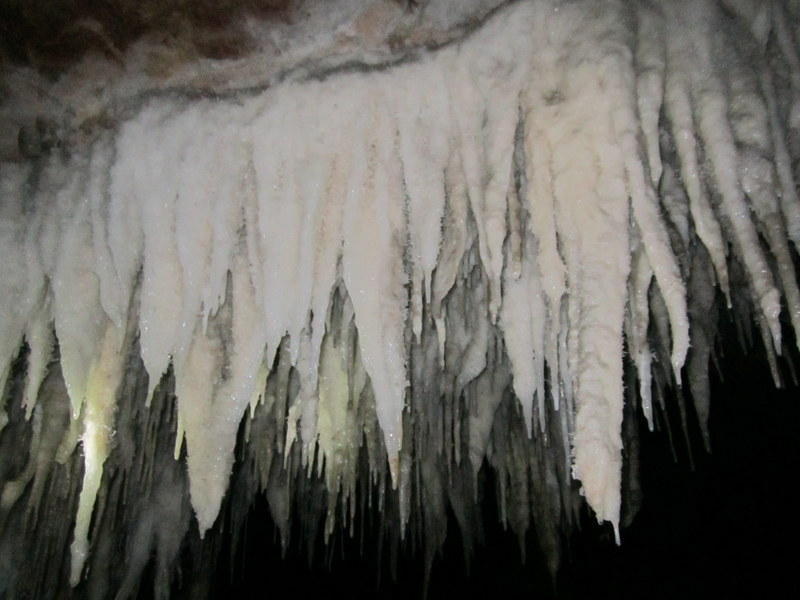 Two groups combined to head into Wonderland. After about 40 minutes of fast, difficult climbing we found ourselves in an amazing chamber of beautiful rock formations. Like I have posted a bunch of times, photos can never do something like this justice. First of all, I had my pokey little camera inside the cave, as it was getting covered in mud. Secondly, a flash doesn’t give the same experience as shining your head lamp on amazing features all around you. It was breathtaking. 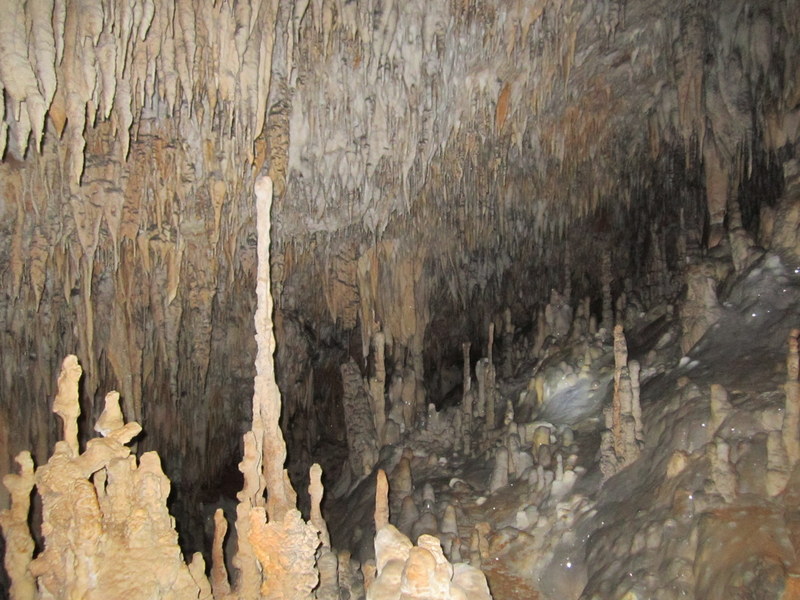 After another 30 minutes were were back where we broke with the others. We had about 45 minutes of climbing still to go to make it out of the cave. It was at this time that the reality of what I was doing hit. I was tired, in the middle of a cave in Belize, surrounded by natural wonder, and relying on a complete stranger to get me out. Life is funny sometimes. 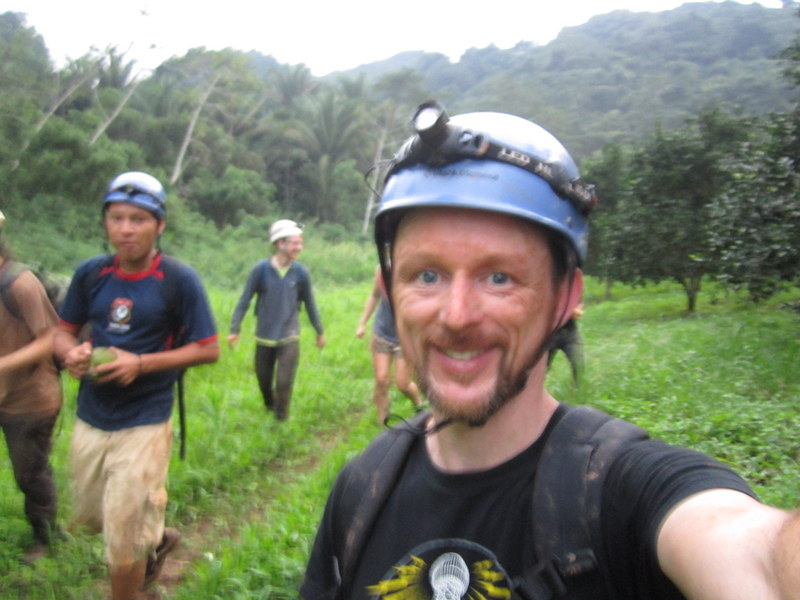 Eventually we saw light! We were all exhausted so it was a sight to behold. Weary, we clambered out with the thought of 45 minutes of jungle trekking to get back. As they predicted, none of us cared about the mud or insects at all. We made our way out of the jungle, with the light fading fast.

The final part of the day was a visit to a cenote for a clean up swim. Sadly with was super dark by the time we arrived, so we only had time for a quick dip to cool down and clean up a bit before heading back to the hotel. During the drive my brain couldn’t really comprehend the craziness I had just done. 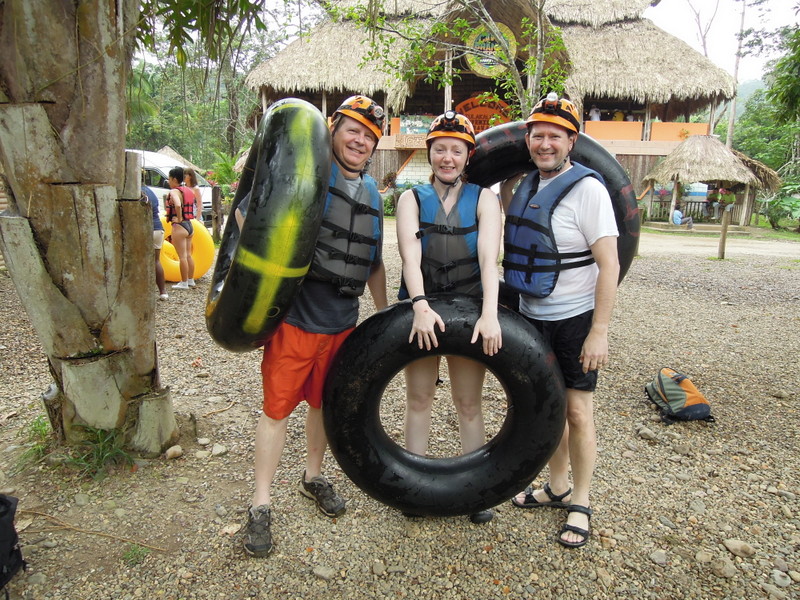 Kate heads out tubing with the lads

I got back to Kate who was eagerly awaiting me for dinner. She had a great half day tubing through caves and down rapids with a couple of of others on the tour. She sounded like she had a great time and said she saw enough of some caves, and in a much more civilised manner then I had, so was super happy with her day.

I could barely manage some dinner before collapsing, and looking forward to tomorrows destination.