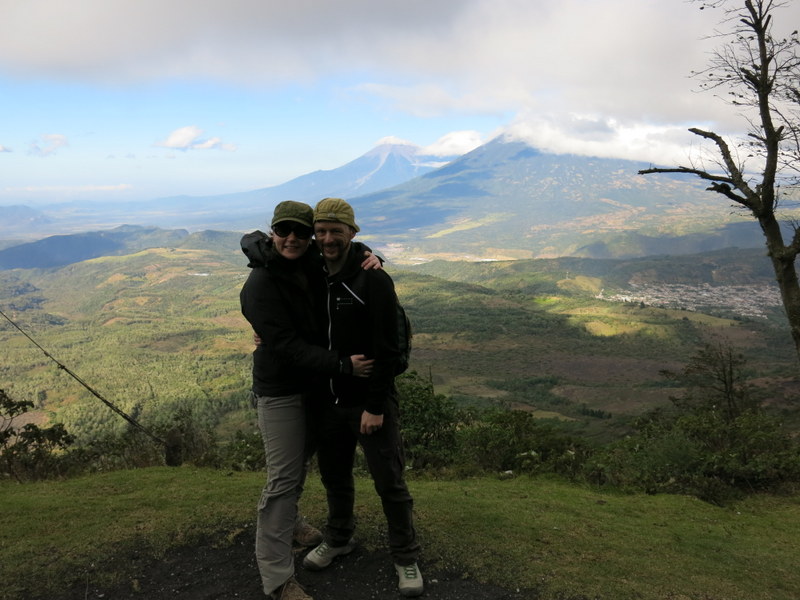 We’re on a volcano!

Hola! Today begins early. Very early. At 6am we were on a bus heading out of town. What were we doing? Why going to hike an active volcano of course! We went early as the weather conditions were likely to be better (which is lucky, more later). So bleary eyed about half of our tour group went off for a morning of hiking.

Views from the volcano

Our destination was a volcano named Pacaya. While not the biggest in the area, it was still about 2600m, but it meant we could get to the top and back in a morning, good for those of us not quite up to hiking fitness, and leaving us time for the afternoon in Antigua for more activities. 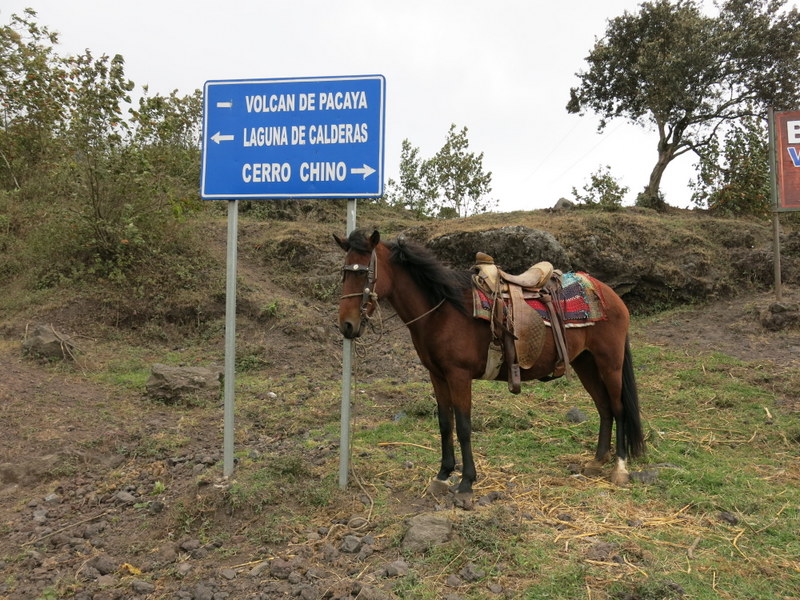 We arrived and were met by a local guide who started us on the path up. While I am pretty fit, I always forget was constant uphill hiking is like, especially when getting to a noticable altitude. The group was doing pretty well, although the regular stops for photos were welcomed by all. 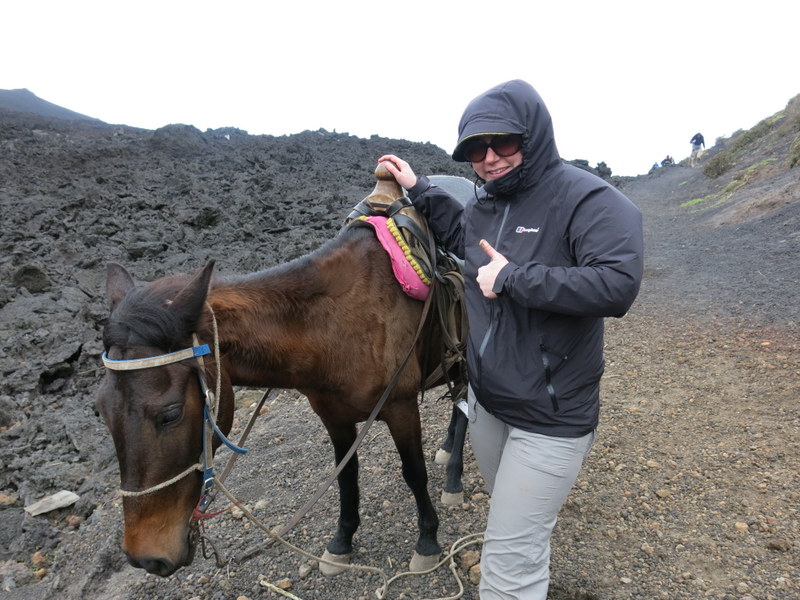 As we went further up the weather got a bit nastier. Not too bad, but the wind picked up and the fog settled in. About 2/3 of the way up Kate was struggling a bit, so jumped on a taxi to get a bit more of the way up. A taxi? Of course! Well, not a traditional one, but a young kid with a horse who was taking many people up to the top on horse back. So Kate jumped on her trusty steed, named Sparkle, and we continued to the top. 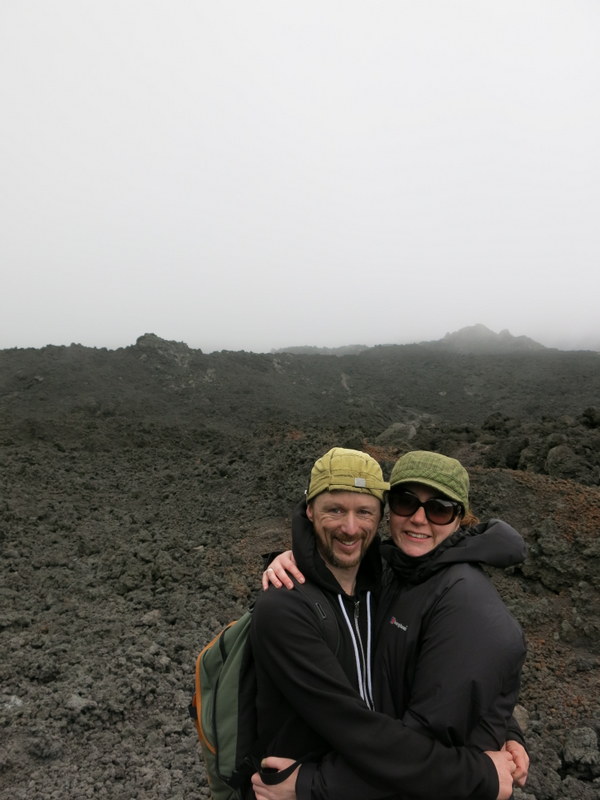 Hanging out in the lava field

Now Pacaya is an active volcano and usually you can see steam coming out the top fairly regularly. But alas the weather conditions meant we couldn’t see anything. Huddled in the wind, we had our breakfast food we carried to the top, whilst perched in the middle of a dried lava field. Even though the conditions were not great it was still awesome to be sitting on top of a volcano in a lava field having brekky. Must remember to leave a good review of this breakfast place on Trip Advisor. 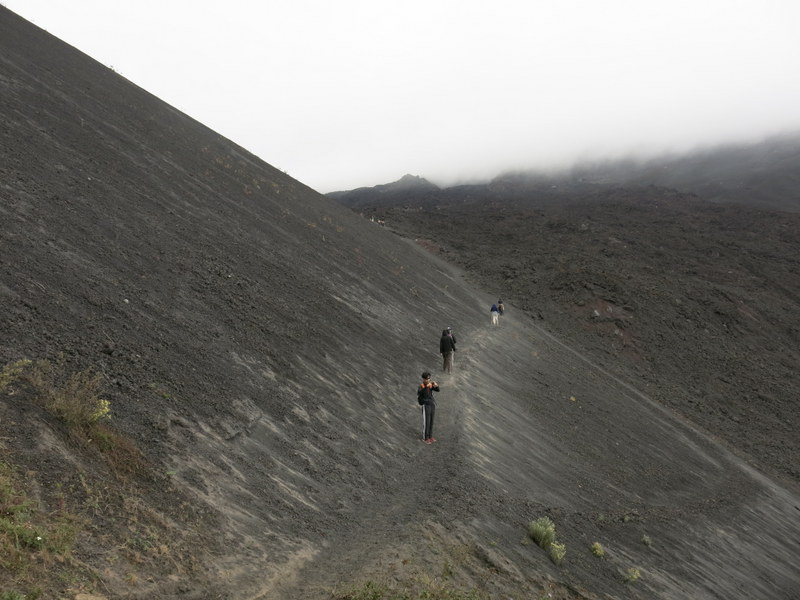 Trekking in the lava field

With that it was a quick trip back down. We had to go back the way we came as our planned route was a bit to precarious with the weather. In o time we were at the bottom, all quite tired and on our way back to Antigua. 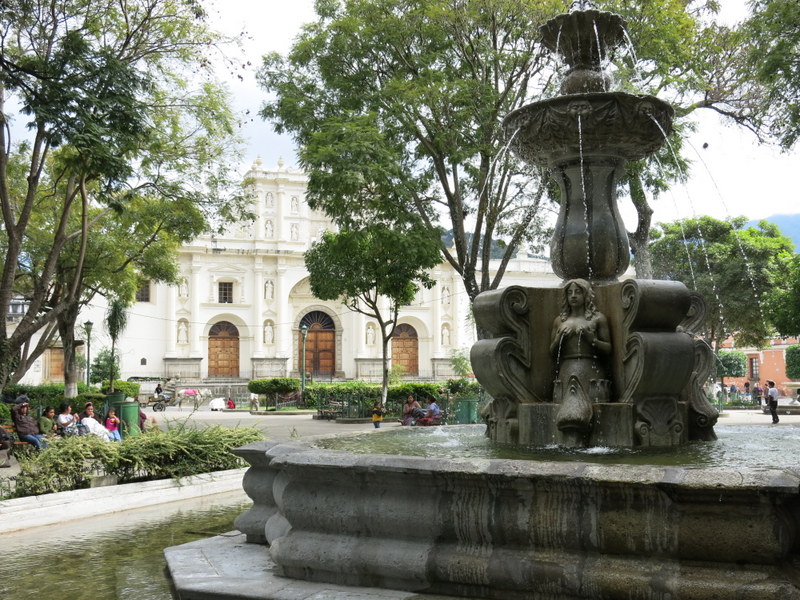 Now Kate was clever. I usually am telling her she is, but she had booked a massage for 2pm which was perfect timing for our arrival back from a volcano hike. I took the time to wander a little more, before we all hooked up again at 4pm for another activity. 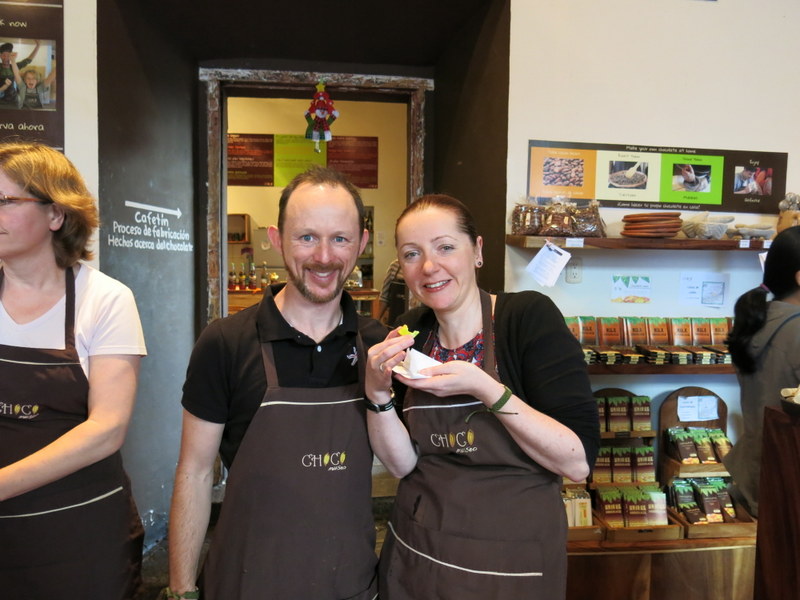 What goes with coffee? Chocolate of course! Most of the group headed to a nearby chocolate museum for a history lesson and most importantly making our on chocolate. Mmmm. 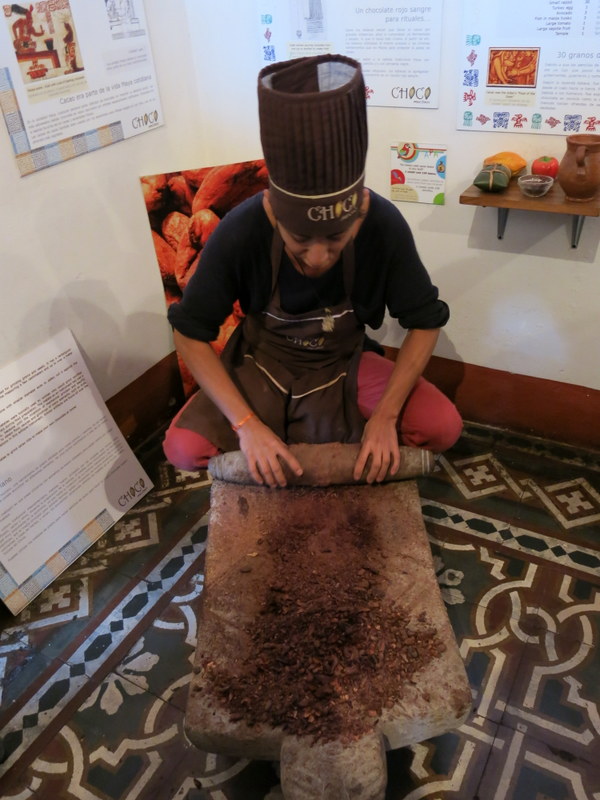 Our guide (who’s name escapes me) was great, running us through the whole history of chocolate. 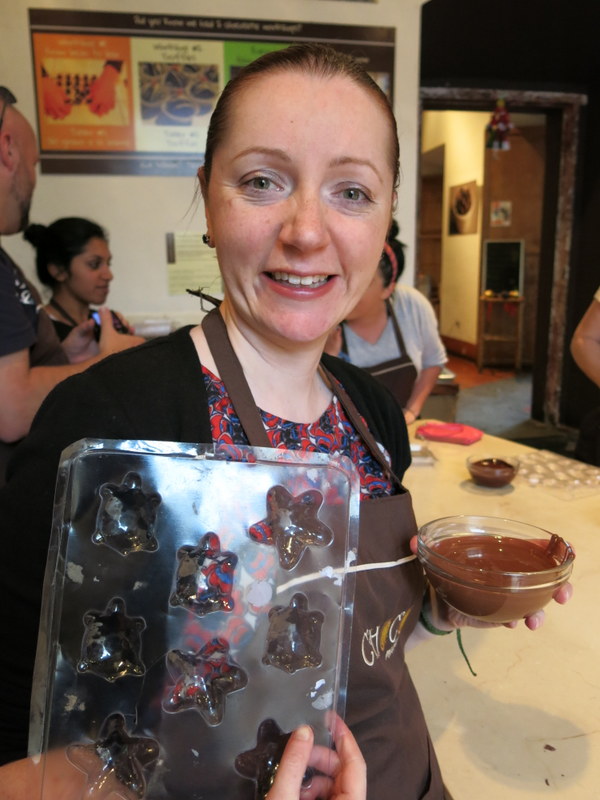 Kate getting ready to create her masterpieces

The most fun came however when we all got to make our own crazy combinations of chocolate. Given a bowl of our preferred blend (dark for me) we got to mix in all kinds of things and then into the fridge it went for collection at the end. Yes!

The rest of time was spent converting cocoa beans into chocolate by roasting, smashing, and mixing. We got to drink cocoa tea and see all kinds of things that could be done, eaten and drunk during the process.

In the end we all had our chocolates and were super happy. But Kate was even happier at the end. Why? Because one of her priority activities was upon us. Deiber whisked 5 of us away from the chocolate and straight into a dance studio. Dance studio? It was time for salsa!

Kate was super excited. Me? I was a little more apprehensive. But when in Rome (or Antigua) right? 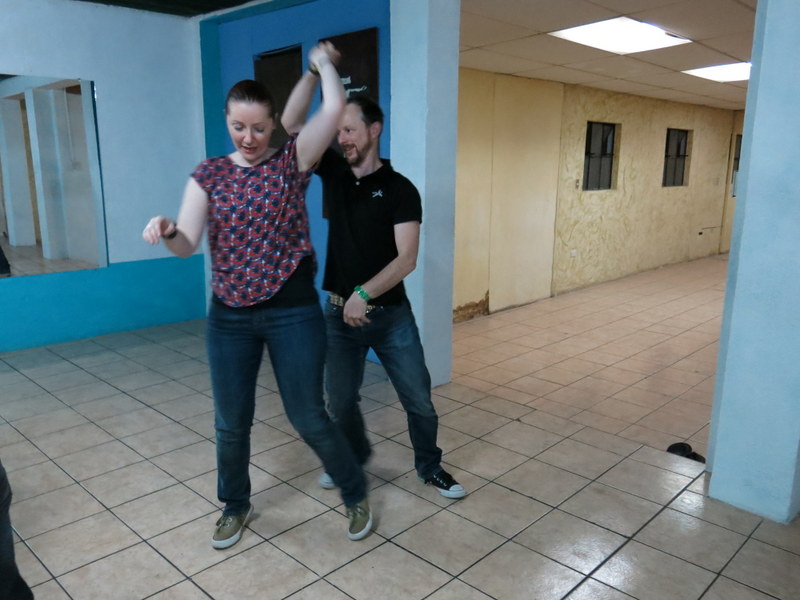 Yeah, I’ve got some moves

For the next hour we were bombarded with a bunch of moves and my head was spinning (faster than my feet). Kate was all moves, me… I was a bit more of a fumbling mess. But it was great fun and the 5 of us that did it had a ball. There was a lot of laughing as our instructor tried his best with his very limited English to get us moving. 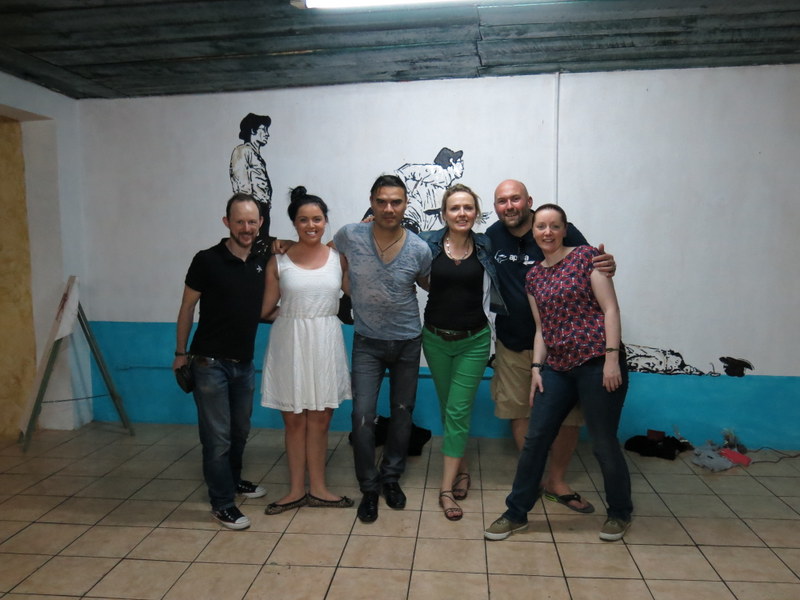 In the end I have to say that I had a couple of moves down. Kate wasn’t too embarrassed with me, so I will take that as a win! Good times.

We had no time to catch our breath and it was off for dinner. This was a special one for two reasons. First it was Christmas Eve, so we had some celebrating to do. But secondly, and a little more sadly, it was the end of the tour for about 2/3 of the group. So it was also a farewell. 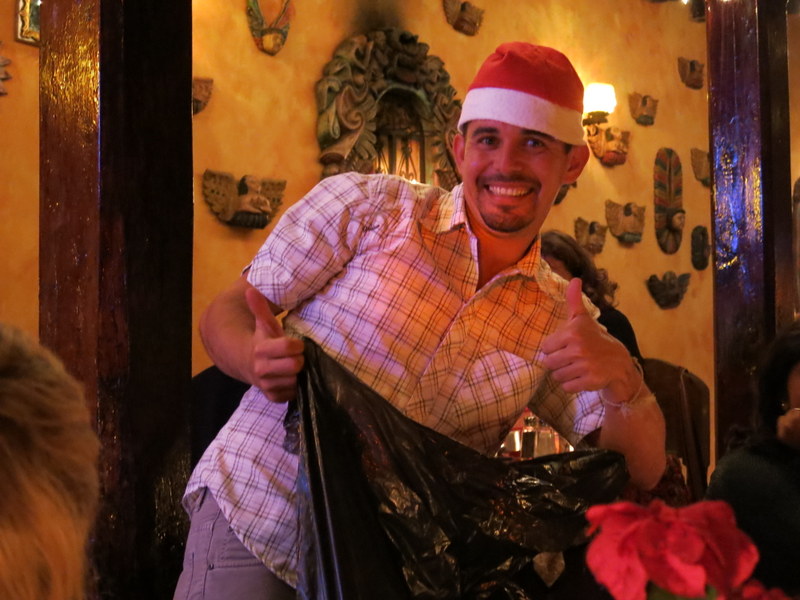 Deiber organised not only a restaurant but a Secret Santa where we all had to buy some small gifts. Best thing was about his plan was that we didn’t just buy a gift for a particular person, rather people could pick on from the pile one at a time and then the next person had a chance to steal something already picked. It was great fun as there was thieving going on left right and centre. 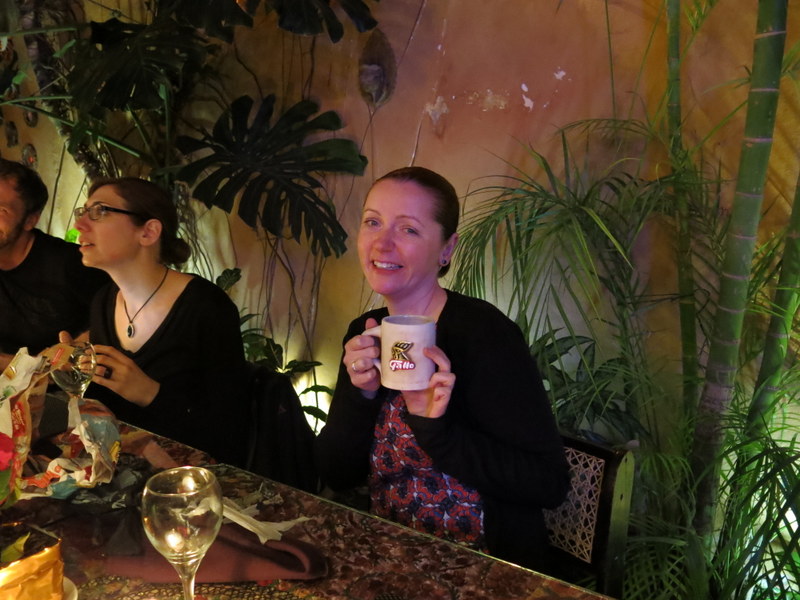 I ended up a with a cool carry bag, Kate with a beer mug. Not he preferred present, but a nice souvenir nonetheless. 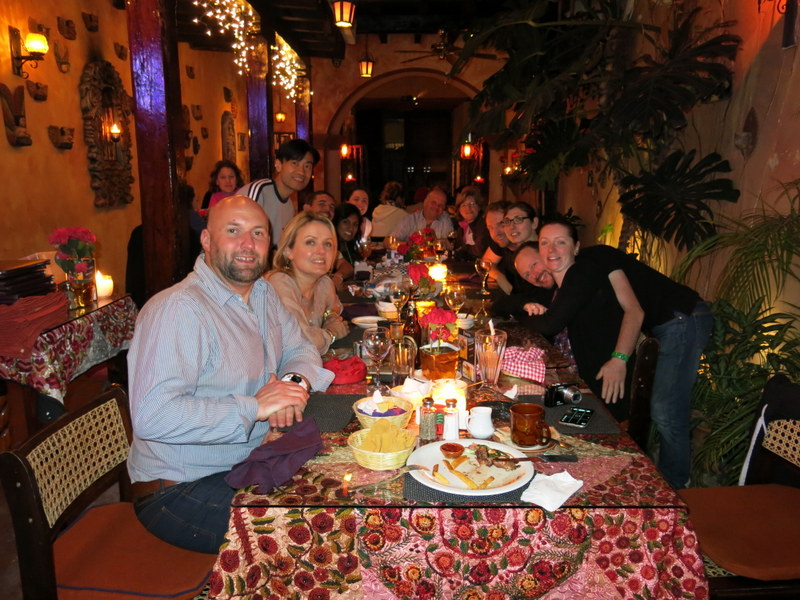 We kicked on for dinner a little more, singing local Christmas songs, before hitting a couple of bars to celebrate and say farewells. On the stroke of midnight we said good bye to some of our new friends, and ready for a relaxing Christmas Day in Antigua before meeting the new folk for the second half of our tour.