Nice to see you again my friends

It’s funny how things play out sometimes. A week ago if you had told me I would have gone to Disney not once but twice whilst in Tokyo I would have said “yeah, right”. Well, seems as though my inner child has been in charge in these days here.

Anyway, today was always planned to be a bit of a whatever happens day. I wanted to visit some record stores and also Harajuku to try my luck to see some cosplayers, but that was about it. So being up at a decent time again, I started visiting my favourite record stores in Shinjuku.

Whilst waiting for one (Disc Union, the king of second hand vinyl in Tokyo) to open I popped my head into a bookstore just up the street. Now believe it or not the whole trip I have actually been on the lookout for the last 2 Haruki Murakami books I needed for my collection, his two first novels. For some strange reason the only place they have been published in English is in Japan. Strange huh? Now I knew I could get them on eBay for a semi-decent price if I needed to but I was determined to find them while here. And I tell ya, I had been into the biggest bookstores I could find in every city I have been to and without success. Well, that was until fate guided me to them today. Yep, amongst 7 floors of books I sniffed them out. No mean feat when everything, including the store guide, is in Japanese. So success! I was a happy camper.

The record shopping was a little less fruitful. Saw some interesting stuff but nothing I was compelled to buy. Oh well, still fun browsing.

So from Shinjuku it was a couple of stops to Harajuku. Were the crazy cosplay kids going to be out on the bridge?!?! Um, nope. Two things probably worked against me… firstly the busier day on the weekend is apparently Sunday, and secondly, by this stage the rain was pretty steady and cold. Bummer.

So given it was about lunchtime and I didn’t have anything really on my agenda, what would I do? Well, I know you know the answer to that. Since I had seen Disney Sea, I really had to see if it was indeed the better of the two and head to Disney Land! Given it was open until 10pm, I would have heaps of time to run amok. 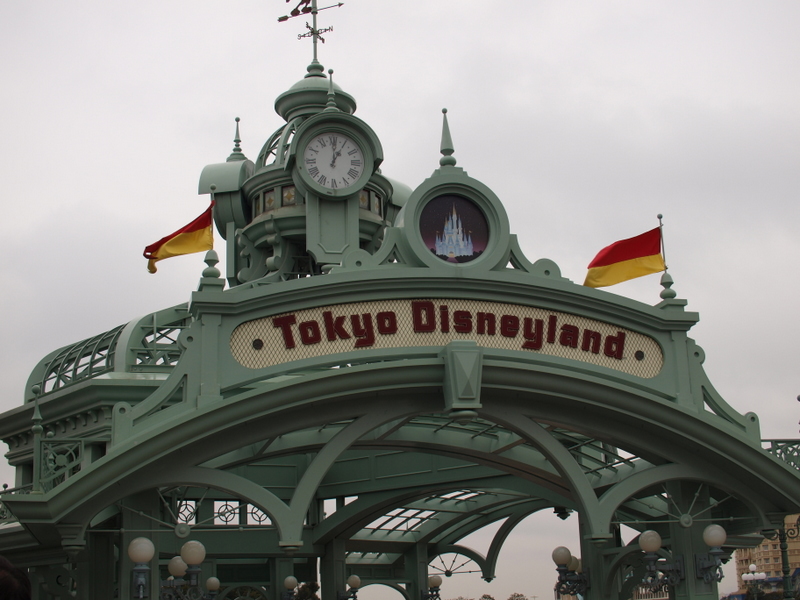 And that I did. Getting in the gates all the memories of California Disneyland and Paris Disneyland came flooding back. Yep, they are pretty much the same. But that was OK. Space Mountain! Splash Mountain! Haunted Mansion! Also some newies that I hadn’t seen… especially keen for the Pixar themed rides. 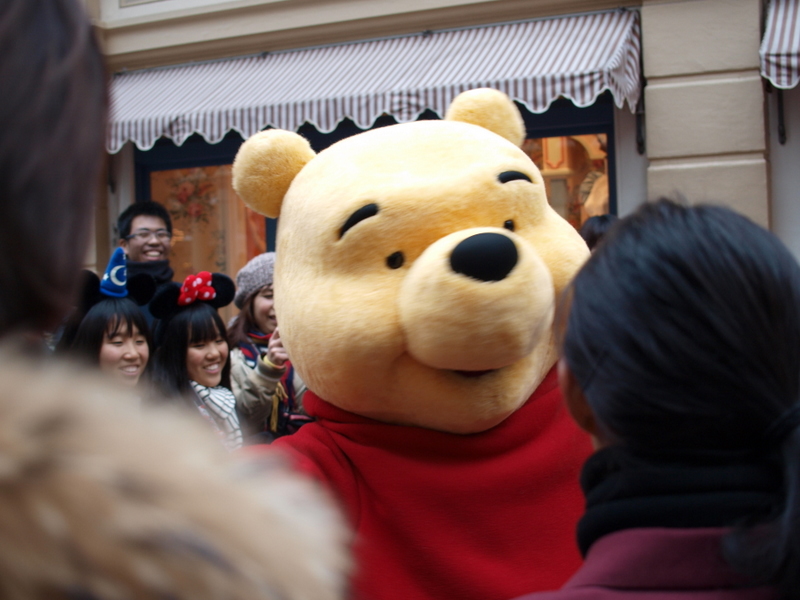 It seems the yellow bears get all the chicks around here

In the main entrance there were a few characters floating around. Pooh definitely was the rockstar in the absence of a certain mouse. 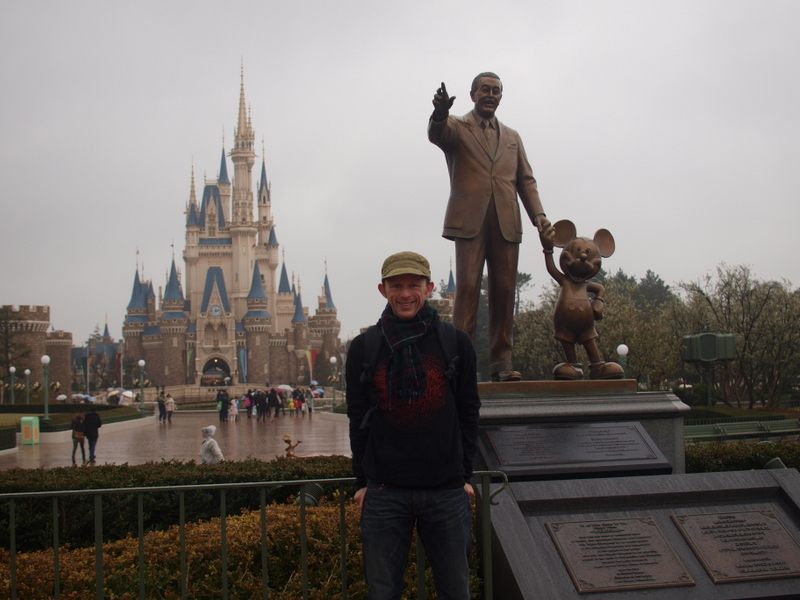 I also had to make sure I got a photo with the statue of Walt and Mickey with the castle in the background… since I am sure I have two other versions of the photo from other lands. 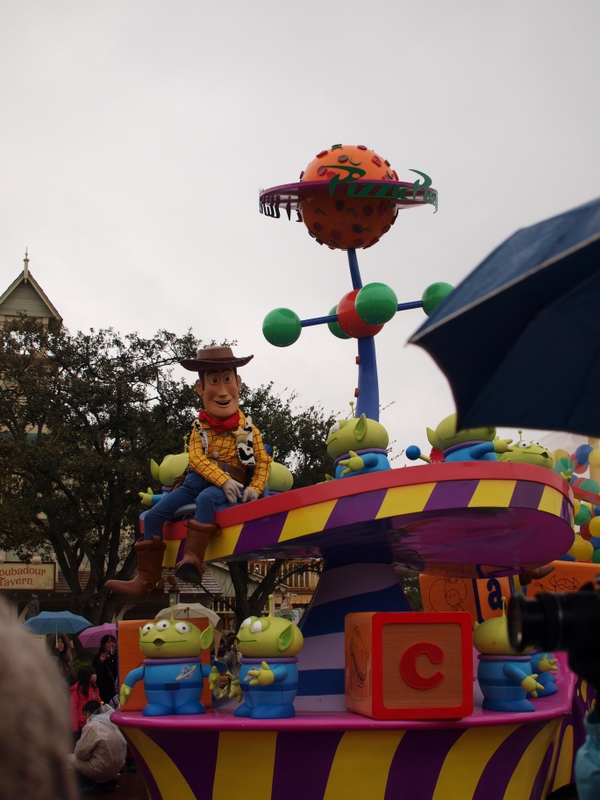 Hey Woody! Give me a wave!

It seemed I was just in time to catch the afternoon parade which was nice timing. Although the big one was slated for the evening (well, so I thought), this was kinda cool. Not sure I am a big one for the parades, but it is fun to see the kids go nuts.

Me, I go nuts for the rides. Oh, but I will admit that I do like harassing the characters for photos. I find it perversely amusing that a 30-something guy would do it. But it’s Disneyland!

So there was Jiminy Cricket… 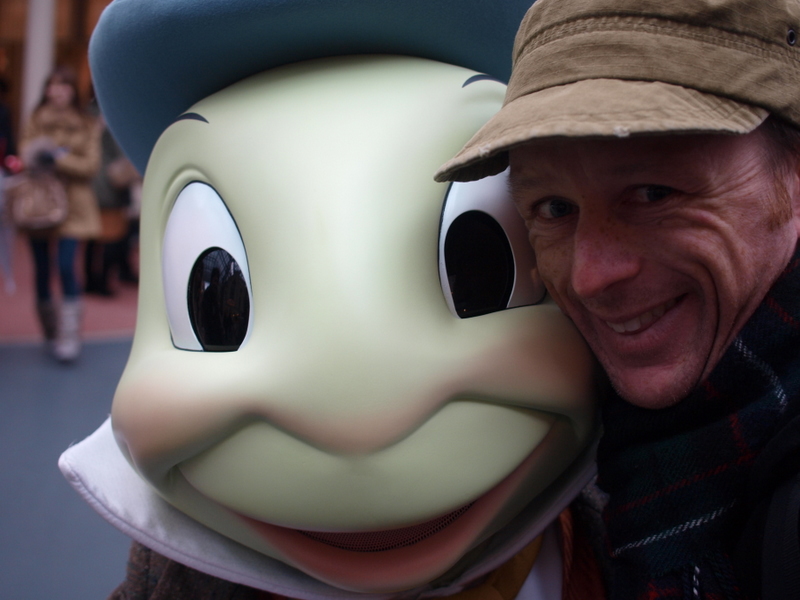 Snow White (this was quite funny… she saw me loitering and grabbed me for the photo… not sure if she thought it was amusing I was getting photos with characters but we did start taking the mickey out of each other (ha, see what I did there)… her asking me if I had seen Dopey about at all, me telling her to enjoy hanging out with her dwarf friends in cold Tokyo) 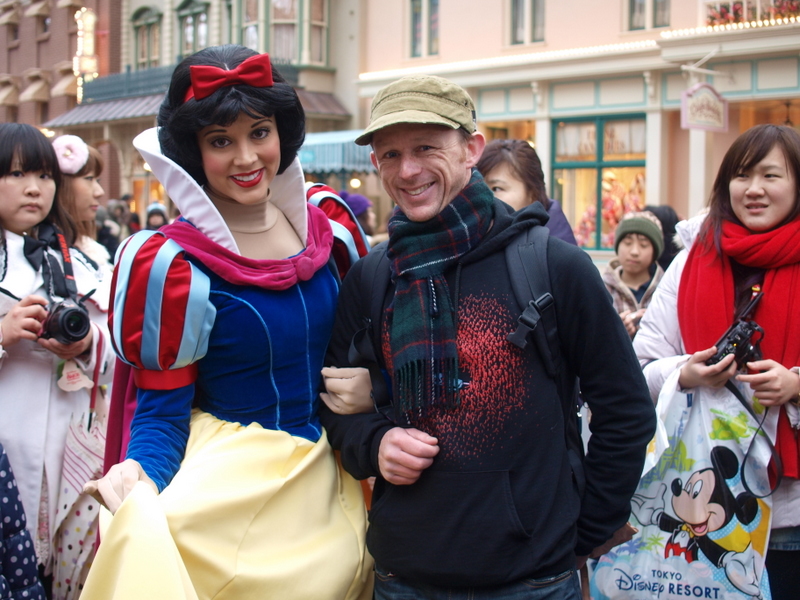 Snow White and her one dwarf 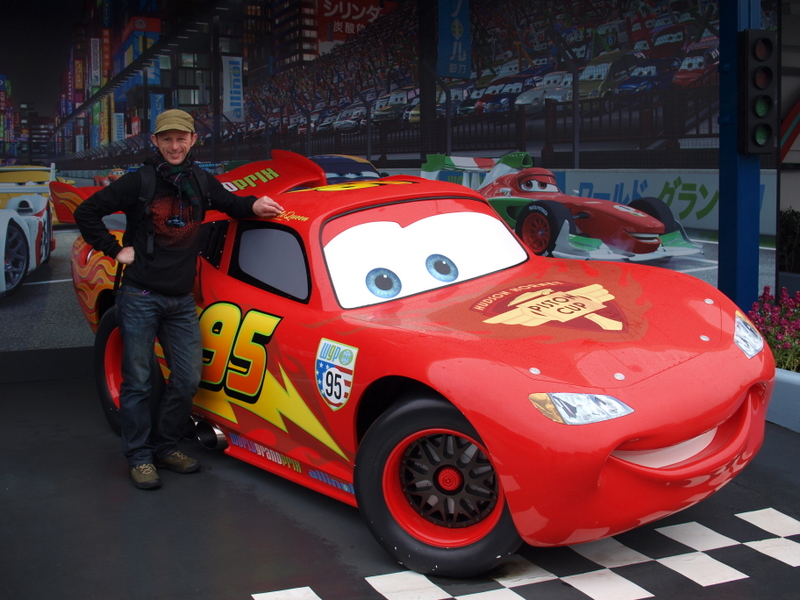 But the characters were a bit sparse today. Well, I guess I got a photo with the mouse the other day. 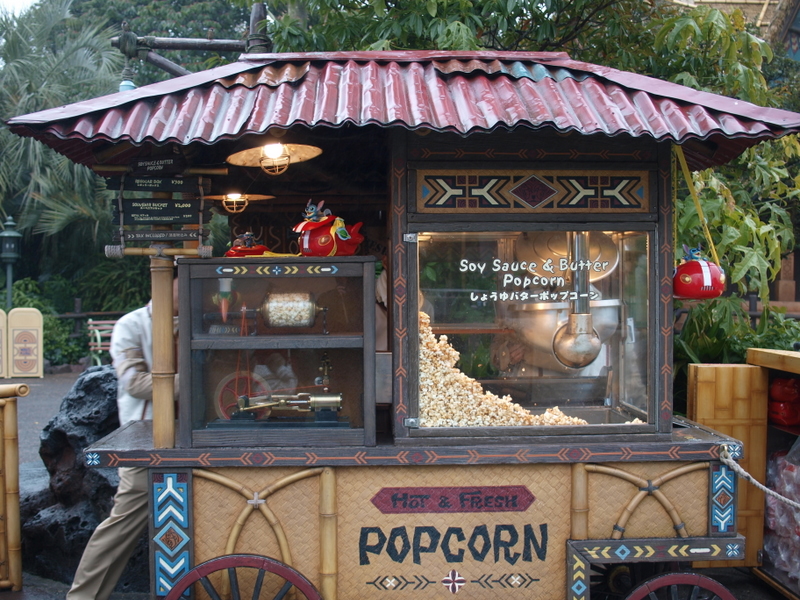 Of course I had to know what it tasted like

Now, you all know my penchant for odd foods. Well, I had to try the Soy Sauce popcorn. How was it. OK. Not salty enough for mine.

So all full of popcorn it was really about hitting the rides, and as mentioned before they brought back the memories of the other Disneylands. Of the ones I hadn’t been on, the Buzz Lightyear Astro Blaster’s ride was addictive since you get to shoot things while you are being guided around in your cart and by the end you want to go back again to get a better score. And, yes this will be embarrassing, Pooh’s Hunny Hunt was actually cutely cool. I know, I know… 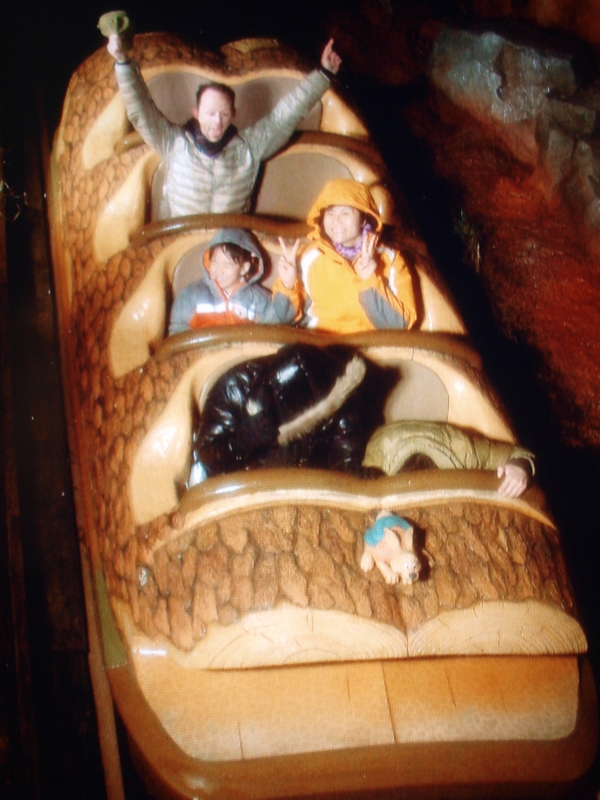 But no trip to Disneyland is complete without Splash Mountain. And there is my “I’m too cheap to buy the photo” photo of my splash down. 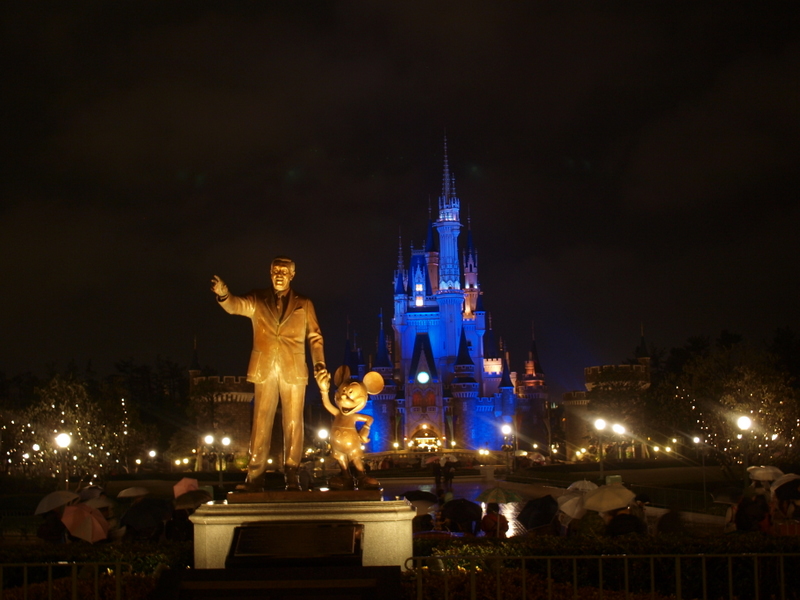 Night falls on the mouse

Well, night started to fall, and so did the rain. Relentlessly. It was getting to be more than light drizzle which meant the park was clearing out a little more quickly than I expected. 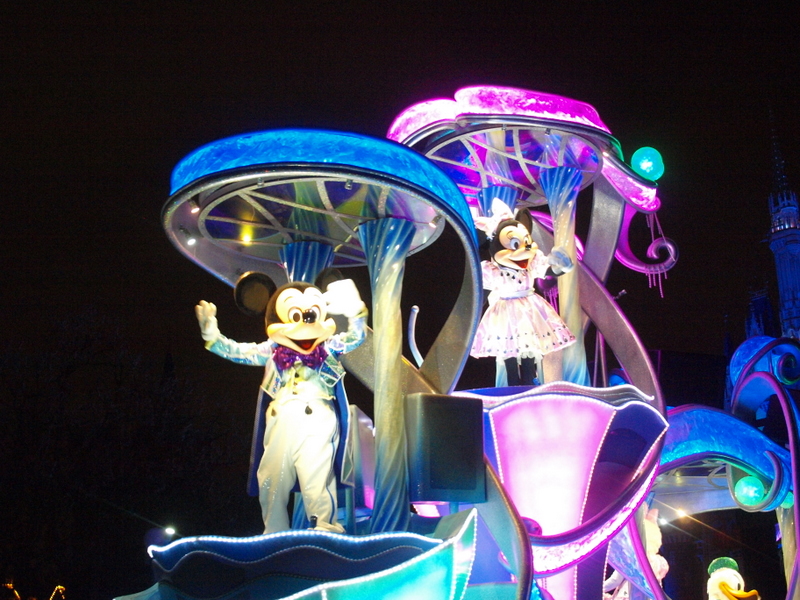 Two mice in a lame parade

The other reason for the park getting empty early was that the main parade had been cancelled. Boo. By all accounts it is pretty spectacular. In its place was a lame 4 float token thing. I guess the kids have to get their Mickey fix.

And with that I decided to call it a night. I was cold and wet. But my inner child had been satisfied muchly yet again.

It also brings my trip to an end believe it or not! Tomorrow is my last day here in Japan before I fly home. I have my plans for the morning before I head to the airport. I’ve saved my favourite place in Tokyo for last.

My next post will most likely be from back home in a couple of days so sit tight people! See you all soon.