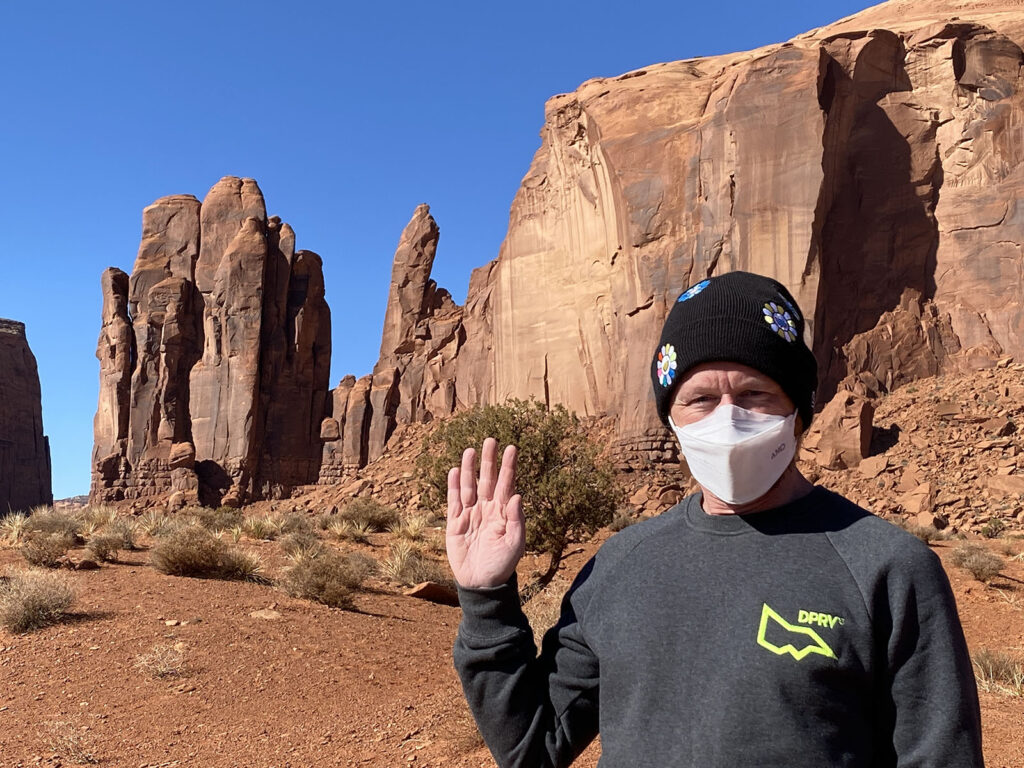 An early morning this morning, as we got up on sunrise to join our one and only organised tour of the trip. We thought it best to take a Navajo organised tour of Monument Valley today for a couple of reasons. Firstly, it would get us into some of the out back areas that you need a guide for. Secondly, in the current era, only 5 cars per hour were being let on to the main drive of Monument Valley. So a tour it was! 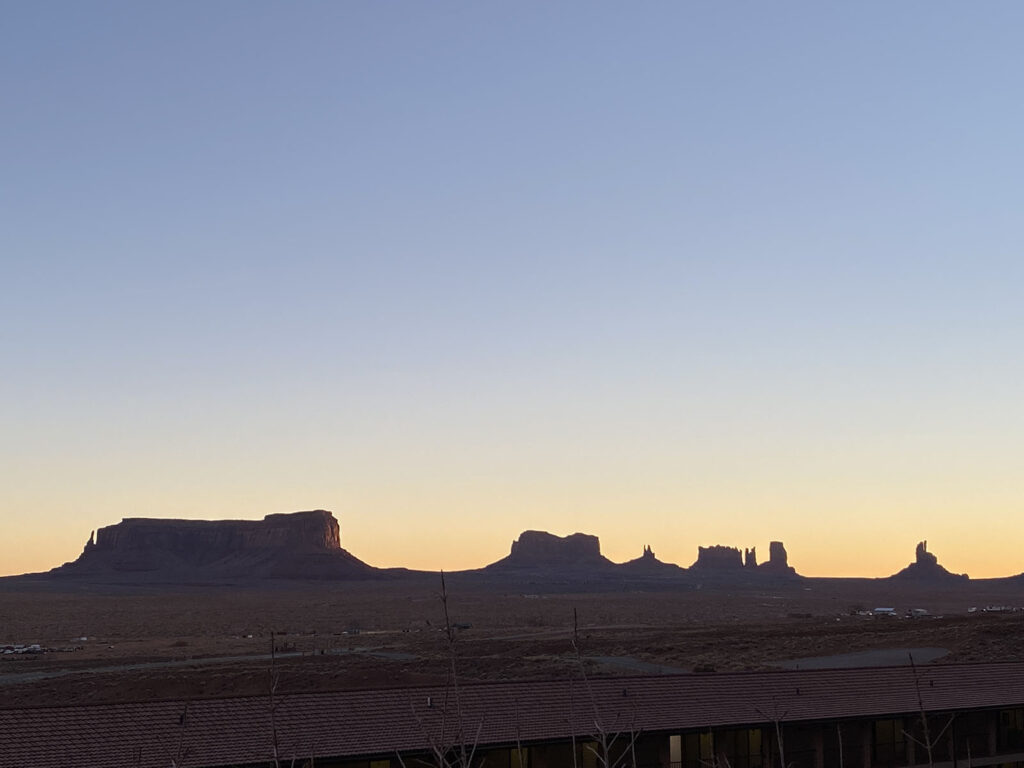 I was up before sunrise, and was thankful for our “valley view” room. Not bad seeing the sun come up over some of the landscape.

At 7:45 am we met up with our guide and the rest of the group, piled into our jeep and headed off. We did a quick stop to check out a Navajo Hogan, a traditional hut made of juniper tree logs and mud. We were told that some of the Navajo people of the area still live in them, although many now take advantage of modern facilities.

From there it was into Monument Valley proper. I was worried this would be “more of the same” having been to so many parks and seen so much countryside over the past 2 weeks, but it had a different feel again. Now THIS was the landscape of those 40s-60s westerns that we all know. Indeed, there are tributes to John Wayne and John Ford all over the place. As such, there was a weird familiarity with the place. 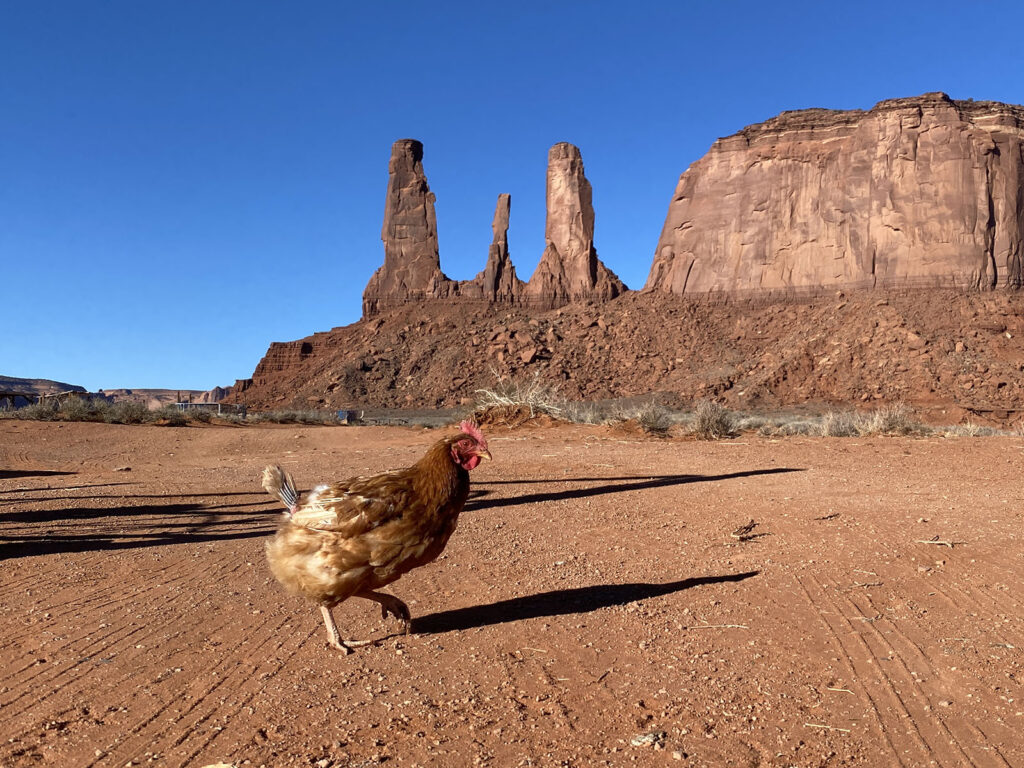 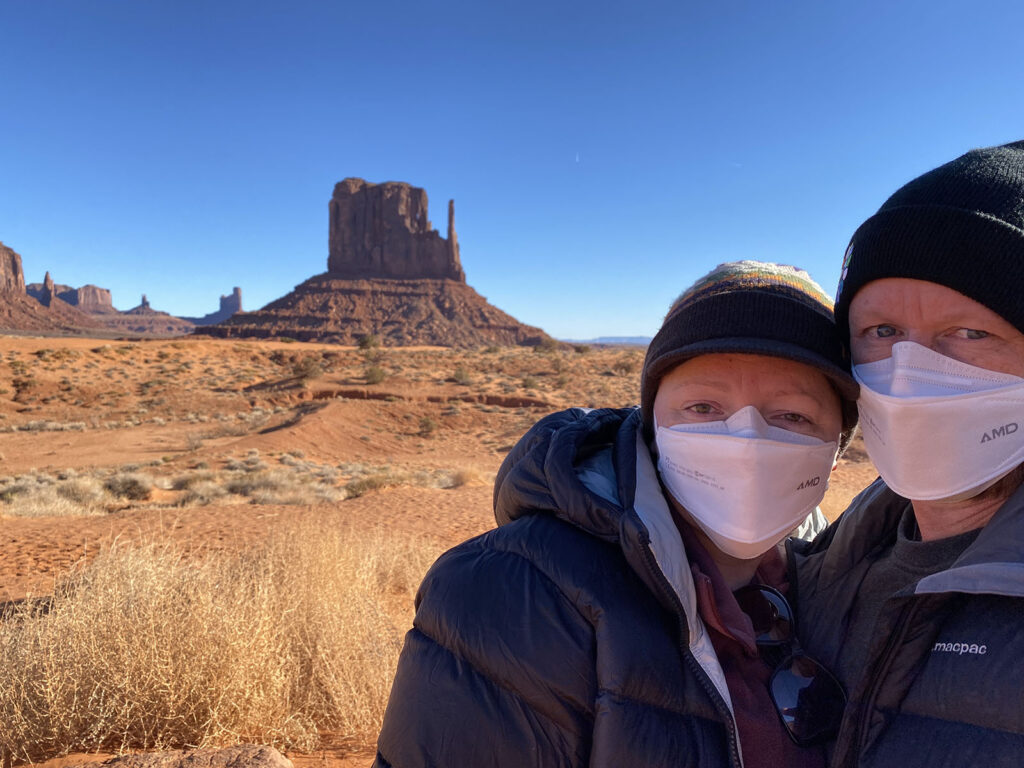 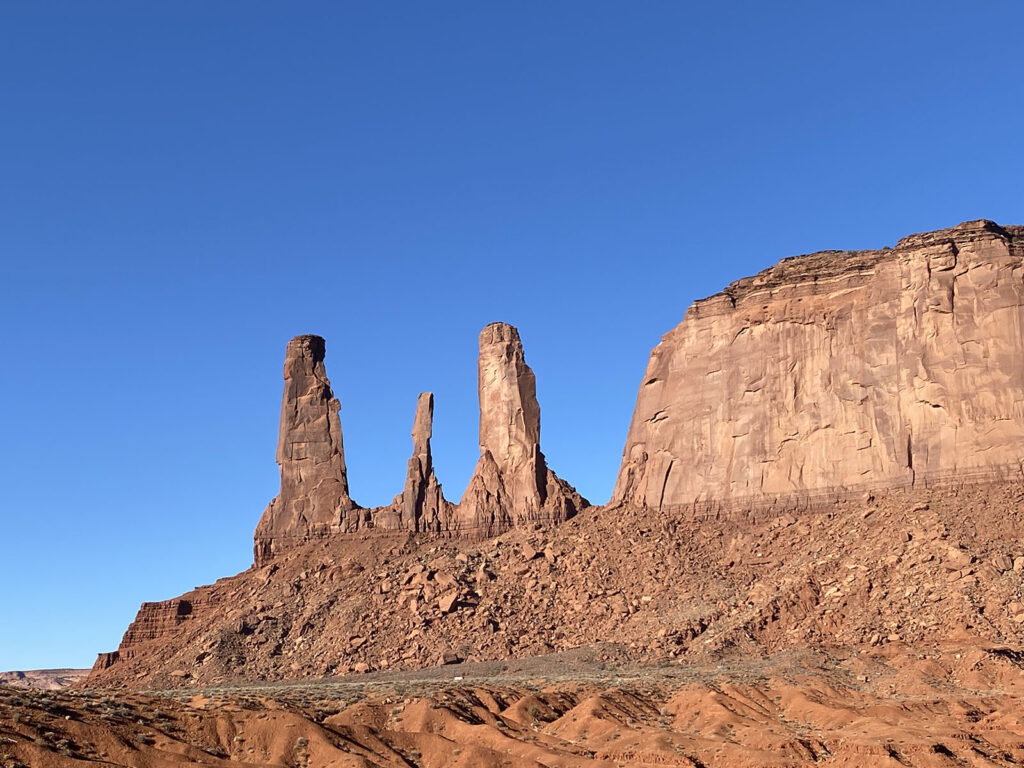 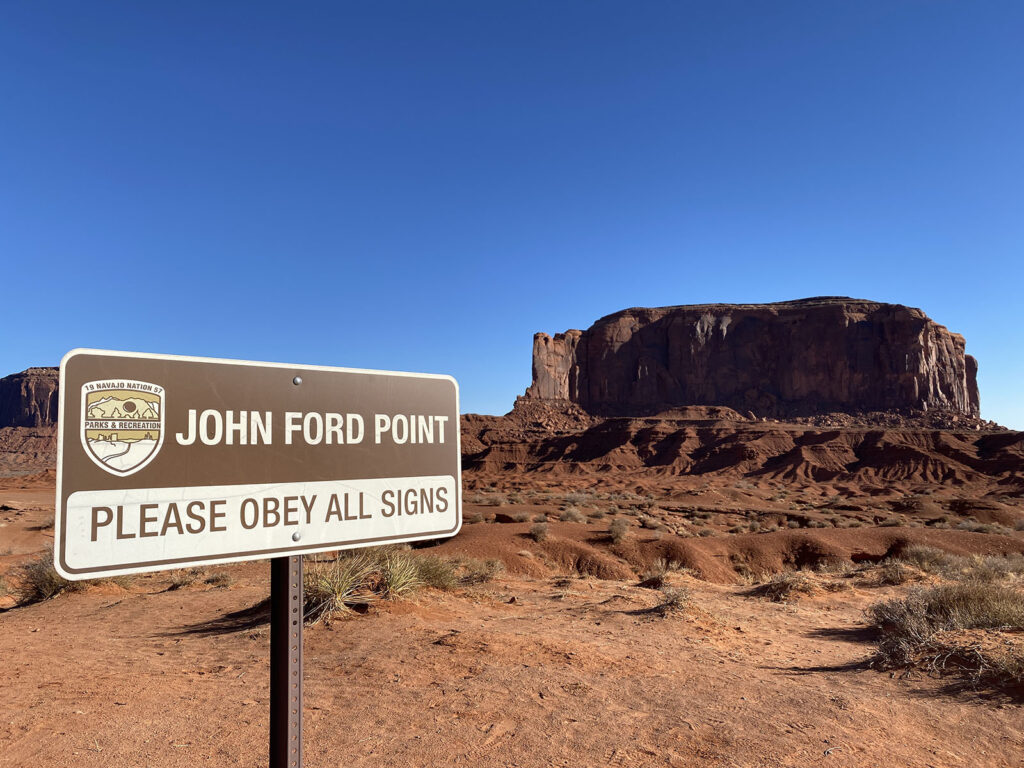 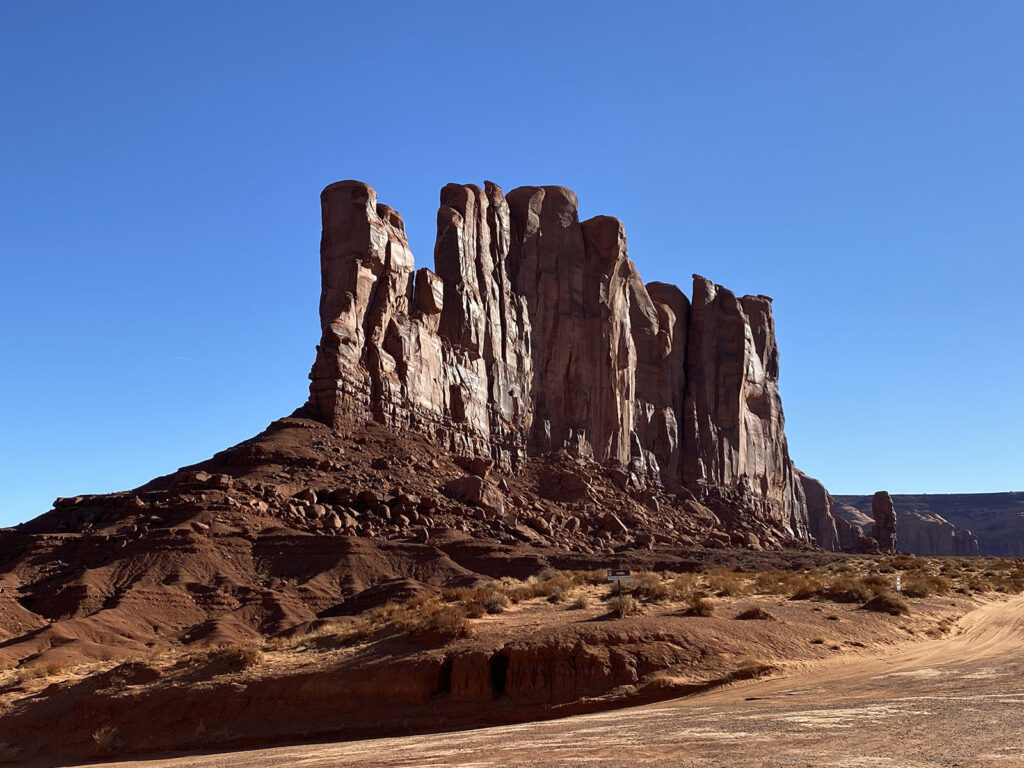 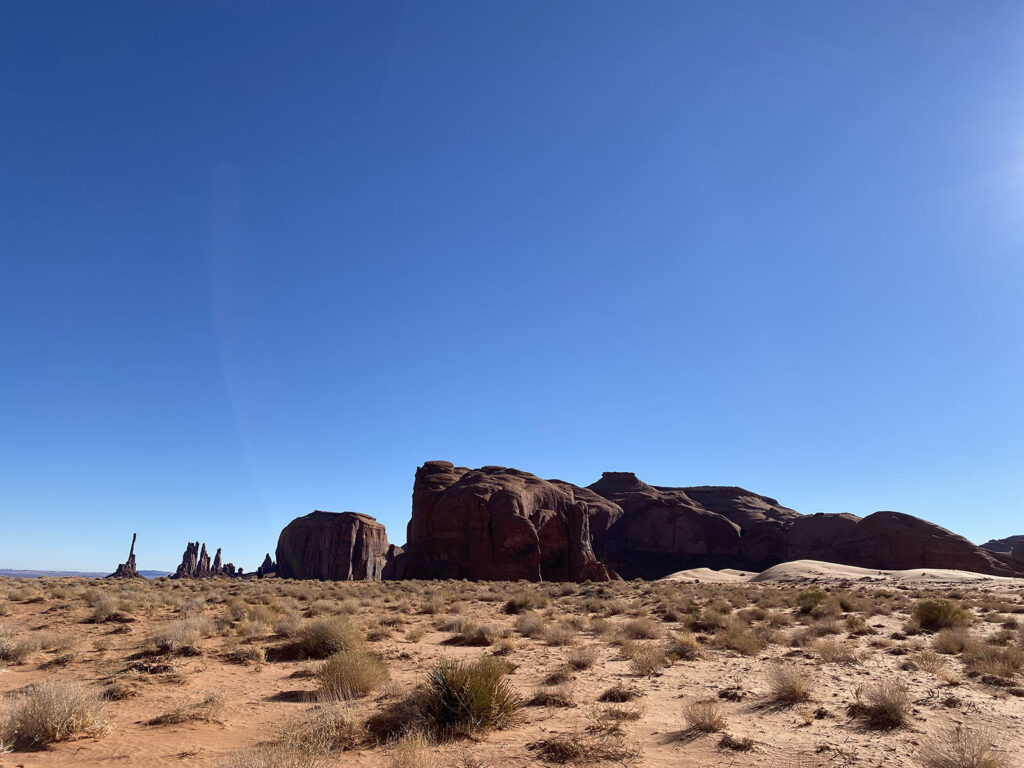 The tour was predominantly spent in the jeep, on the dusty trails, being pointed out to all the different “monuments”. Unlike the other parks, Monument Valley is mostly barren red landscape, with towering rocks coming out. Each have their own “personality” of sorts as well as quirky names. So we wound our way on the trail, stopping periodically to get more info and for scenic photos.

At times we were able to get off the main track into private Navajo land, a big reason for the tour. On those tracks we got to see a number of pectroglyphs, that unlike others we had seen in our travels, we were able to get right up to, given the private land we were on. We also saw several arches, one of which we were pointed out looked just like an eagle (see if you can work it out from the pictures below… hint, look for a blue eye and the curve of the beak). 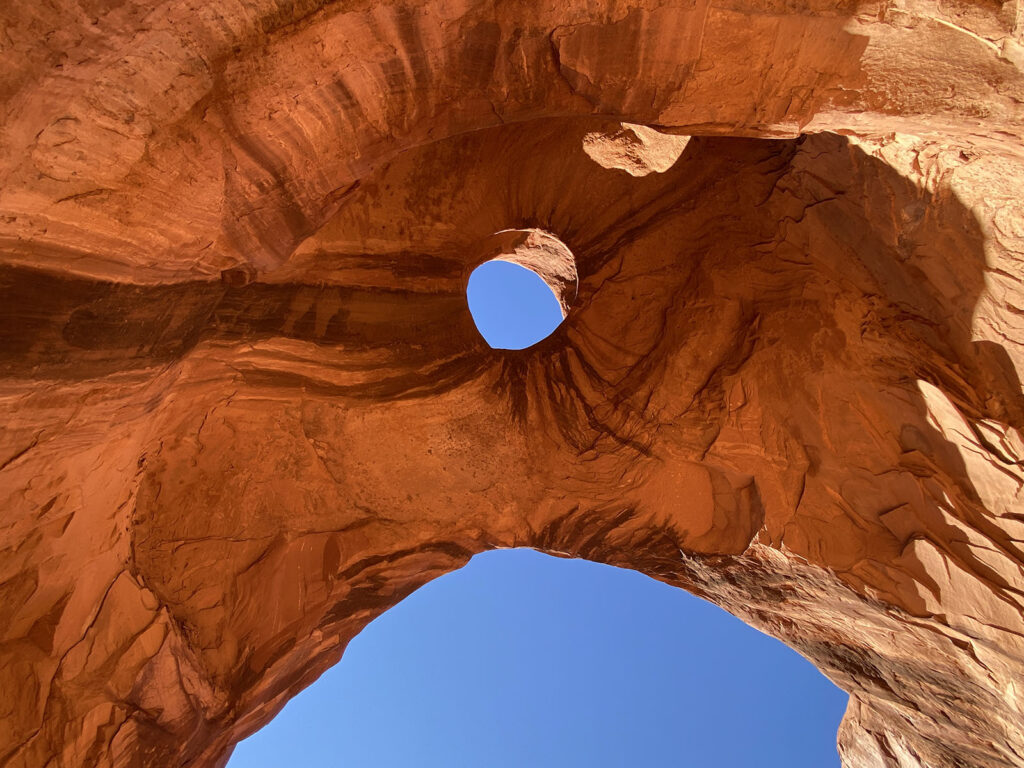 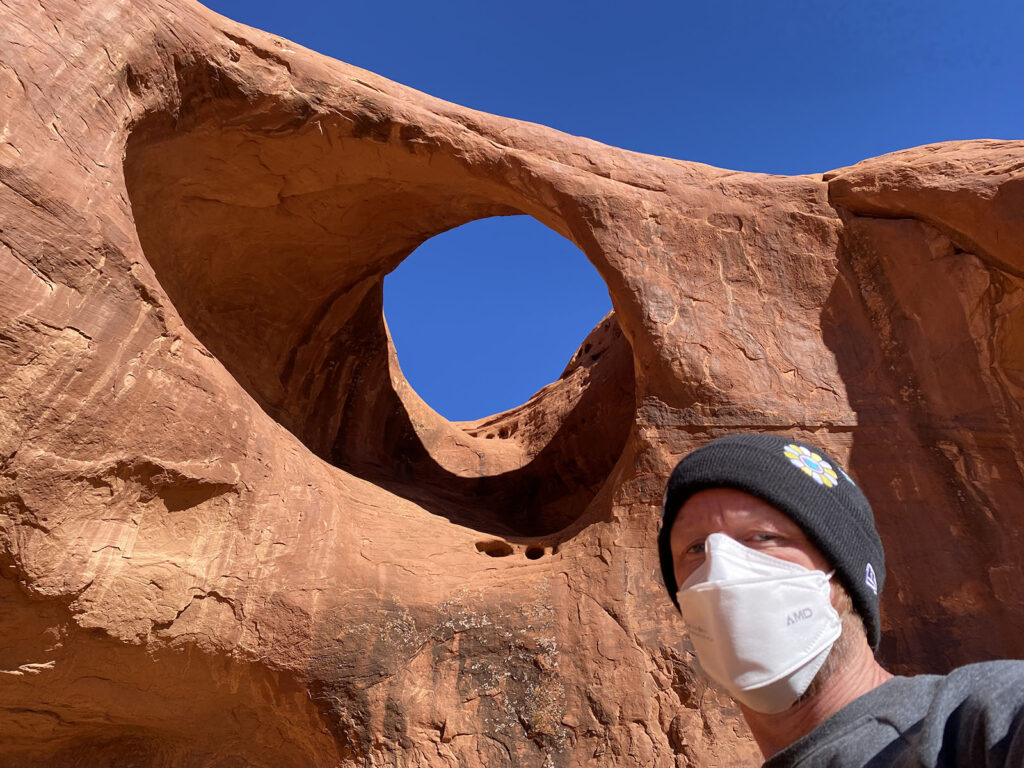 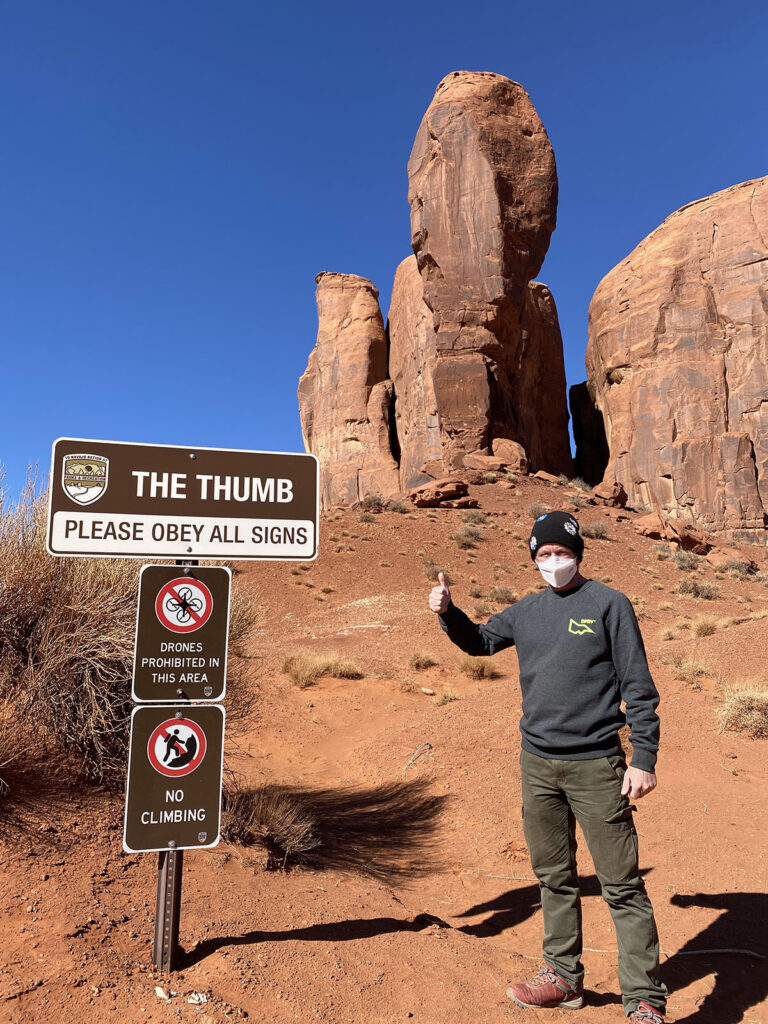 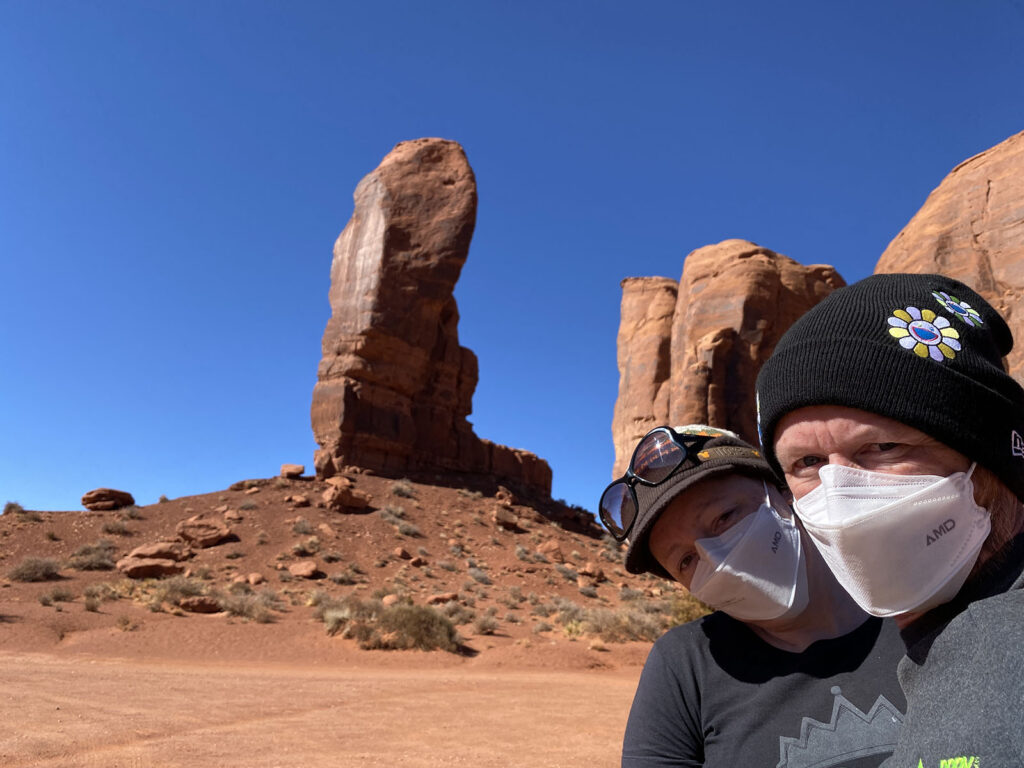 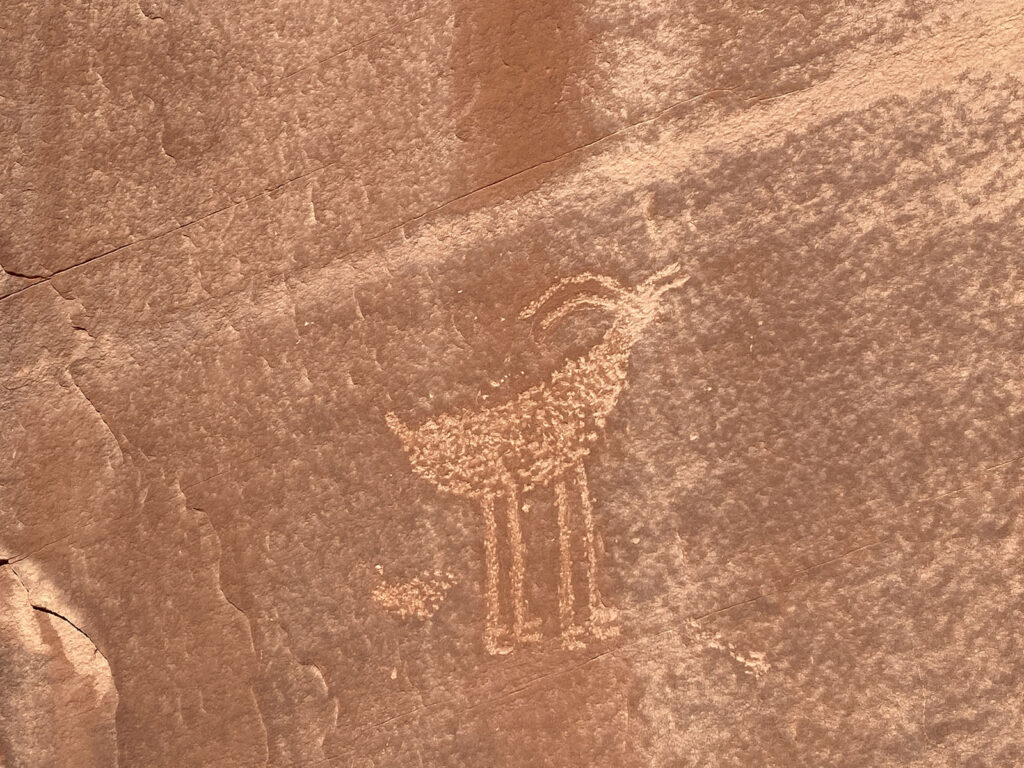 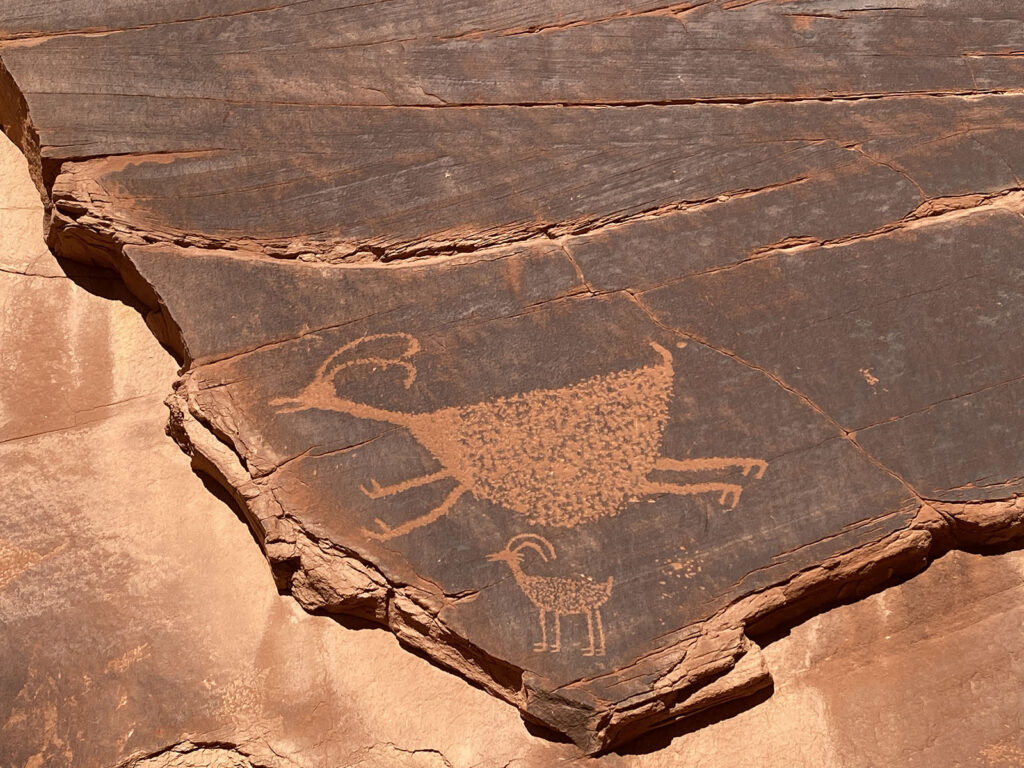 The tour went for 3.5 hours and took its time through. It was stunning landscape, and I could see why many people make the trip, especially evoking Hollywood of the past.

This meant we were done by lunchtime. Unlike the other parks, hiking is not really a thing here, so we decided to drive on a few of the public roads to get some better views of the monuments from different angles. 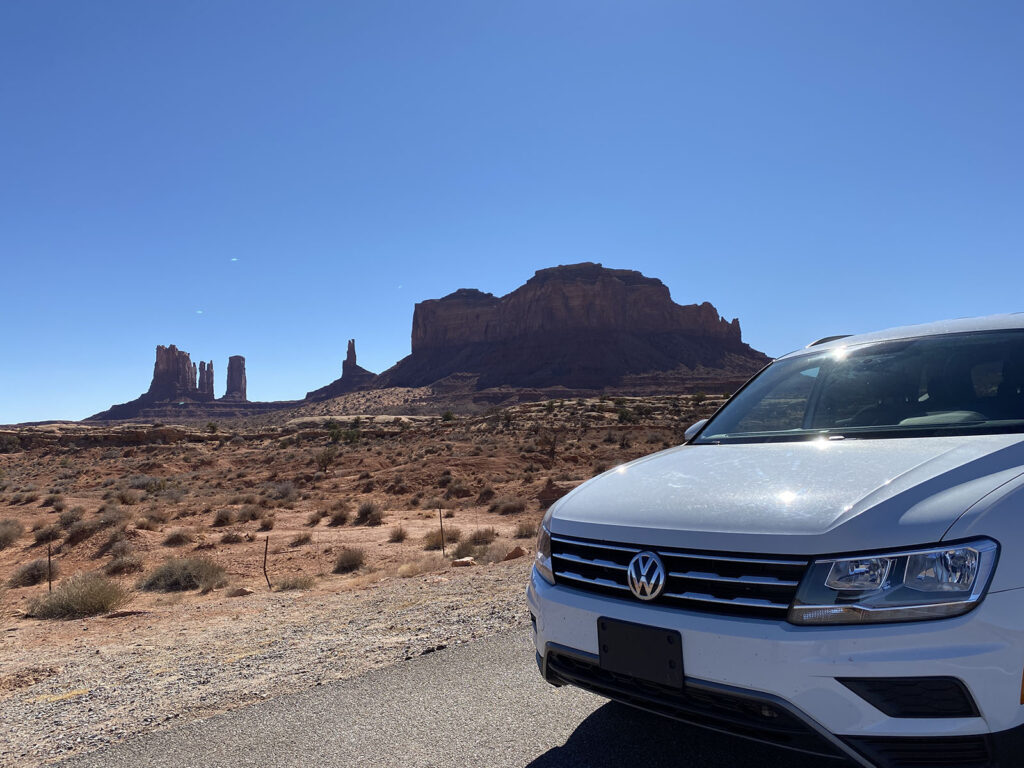 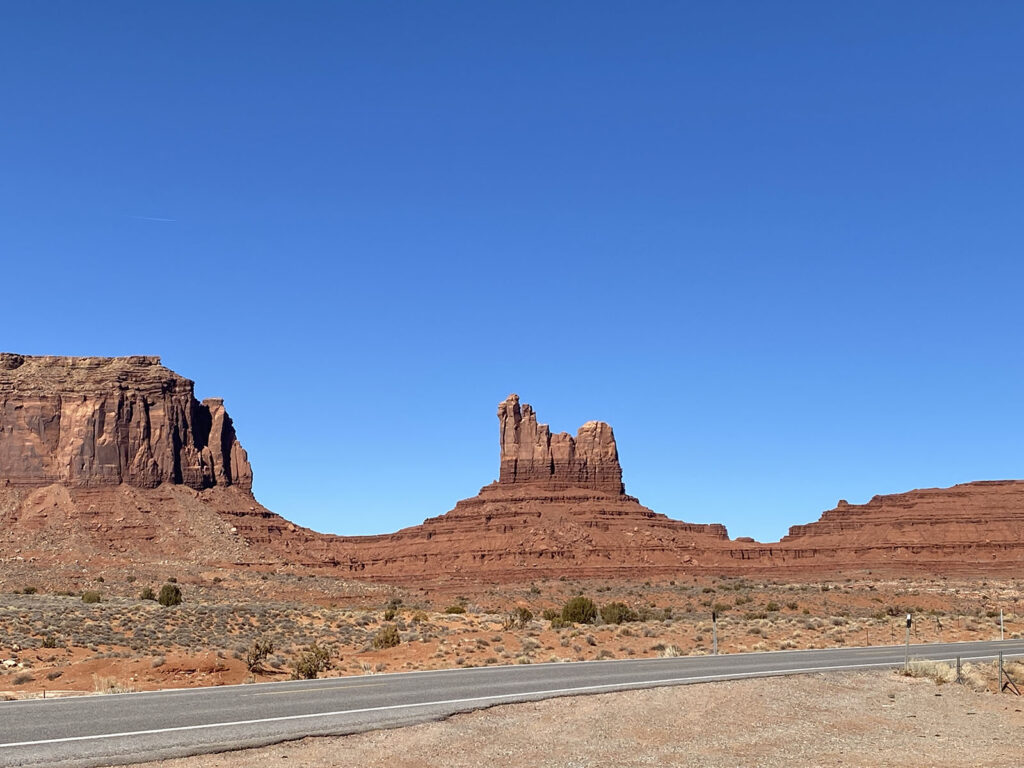 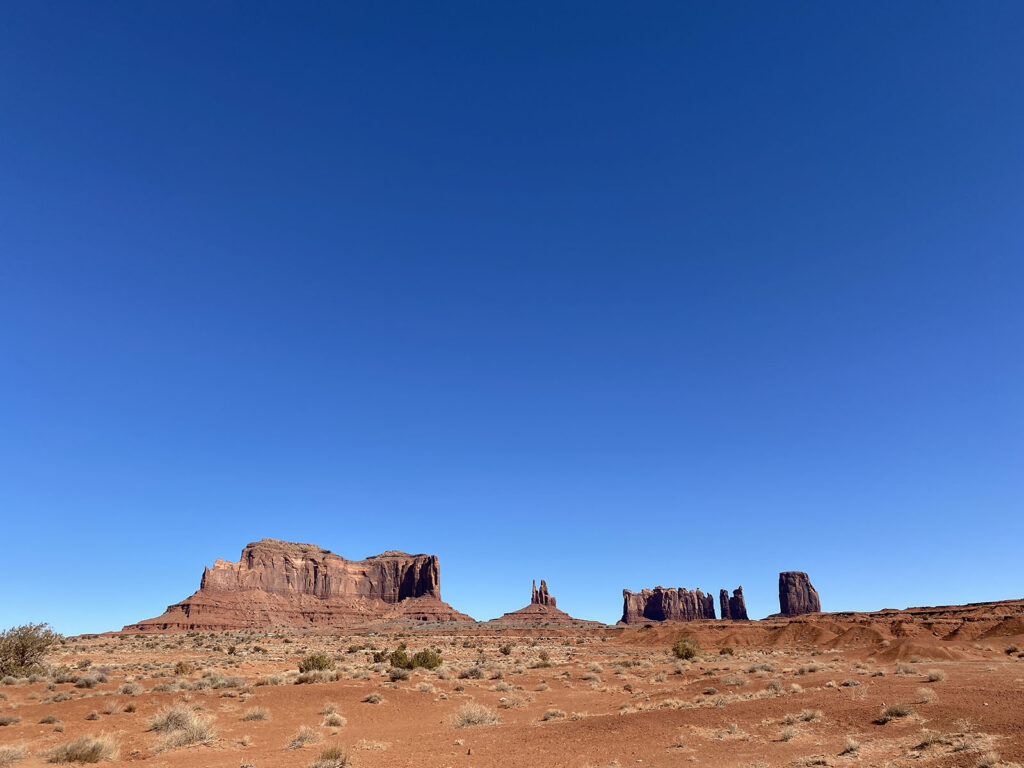 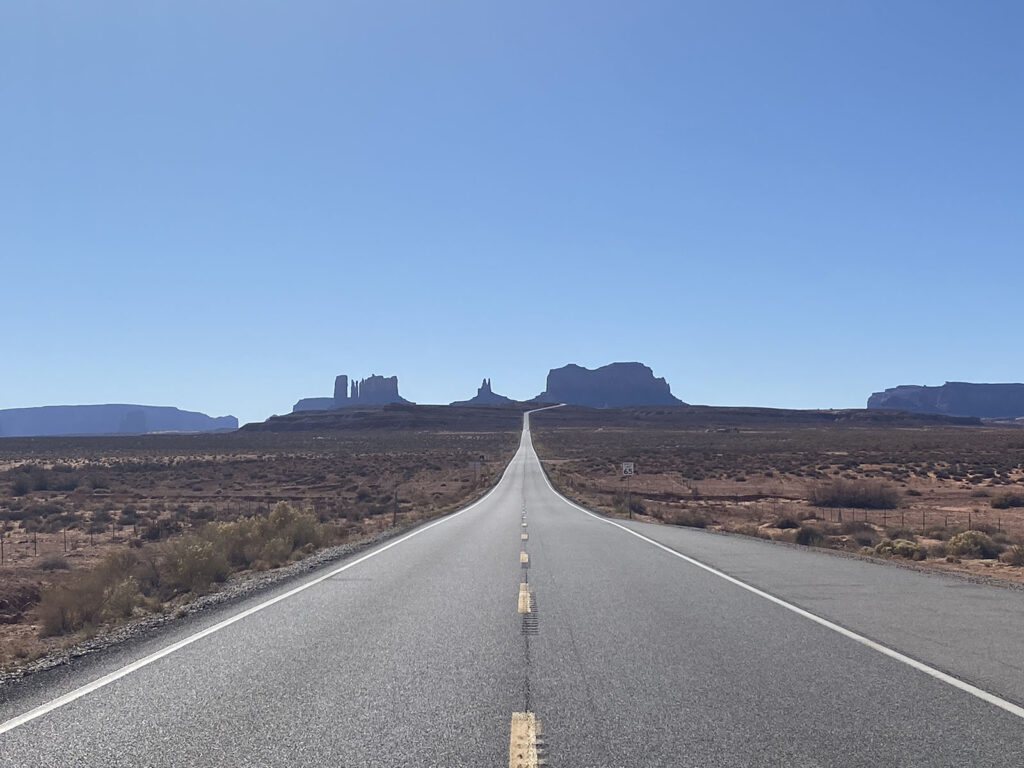 We also came across the spot where Forrest Gump famously ended his cross country running. We roughly knew where the spot was, but it was easy to find… just look for all the people standing in the middle of the road! 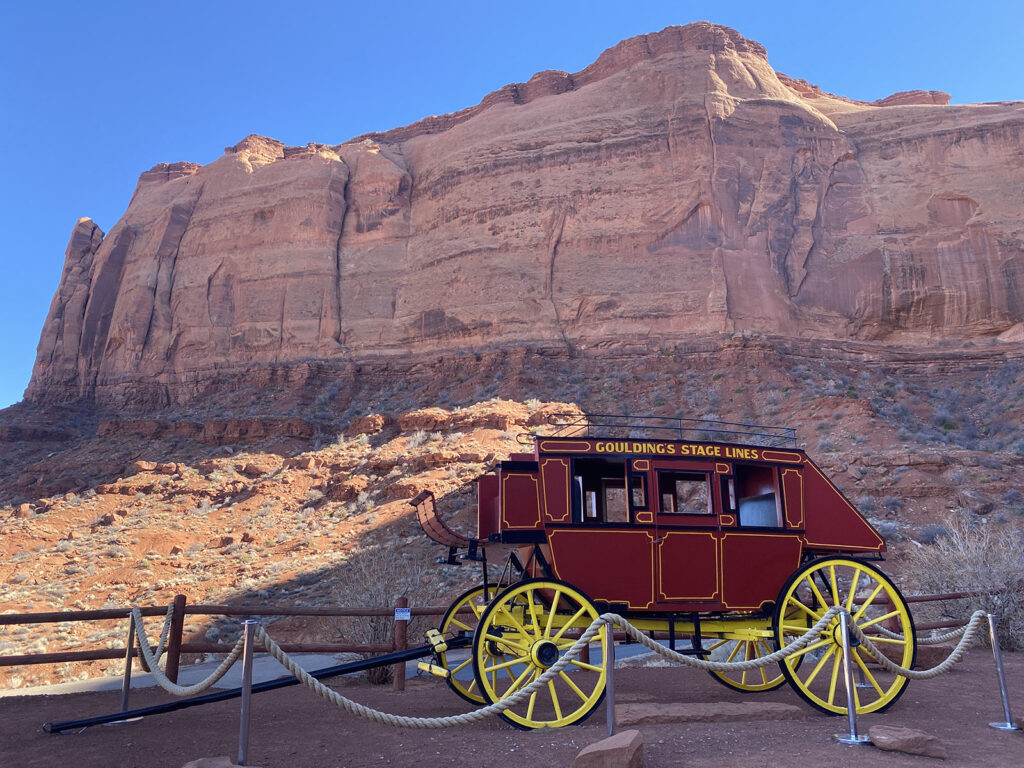 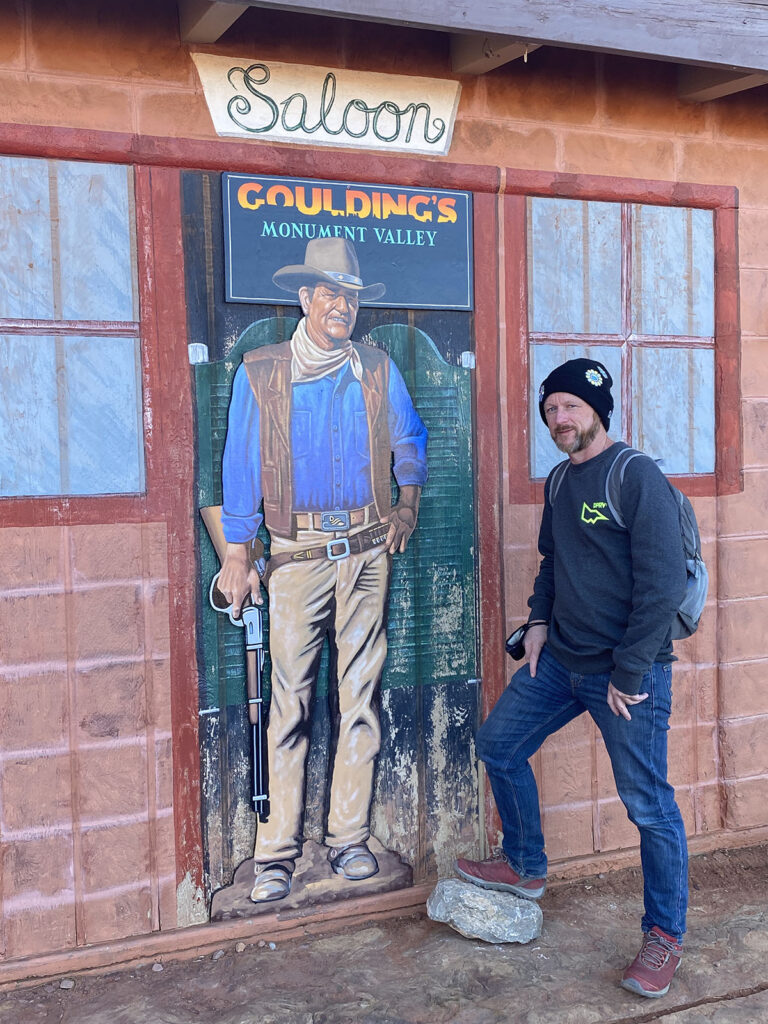 The rest of the day was spent relaxing with the gorgeous vistas. The hotel also shows a John Wayne film each night, with tonight being Stagecoach, so I decided to settle in for the night with the seminal 19030’s western (sadly The Searchers was the night before). Tomorrow it is heading back west for the Grand Canyon!