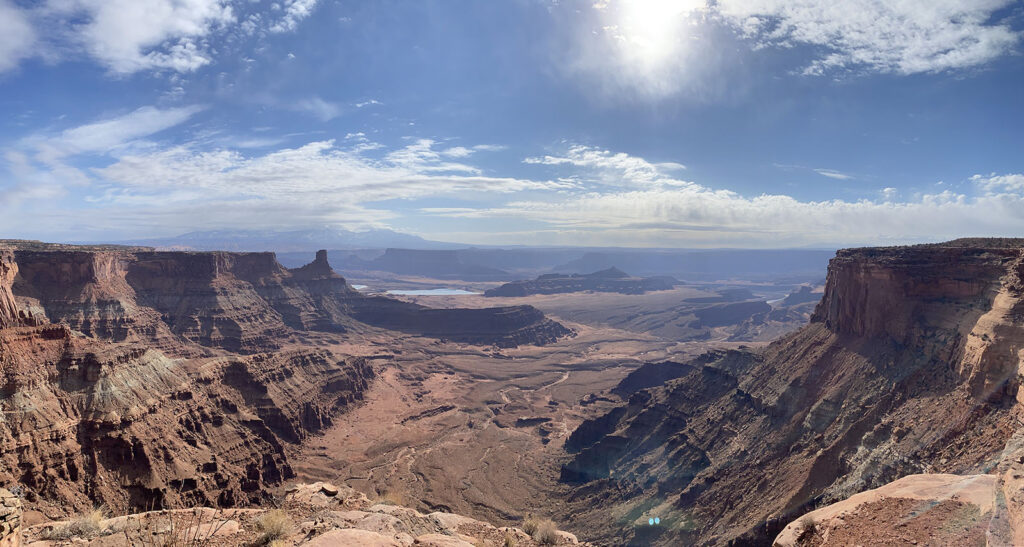 Our first real day in Moab, and it was our first overcast day of the trip. Given we are here in the depths of winter, we have had a charmed run. And when I say overcast, it wasn’t like it was threatening rain or snow. But because of this, we decided to head to Canyonlands National Park, rather than Arches, as Arches was top of Kate’s “to do” list so we thought we would trust the forecast for sunny weather tomorrow.

Off we went. Just near Canyonlands is a State Park called Dead Horse Point, and we thought we would wheel in there before heading into Canyonlands proper. Oh boy we were glad we did.

Kate remarked that while Utah is dominated by rock formations, each park had a different feel, and already we felt that this part of Utah was different to Zion, Bryce and Capitol Reef. Here we were surrounded by basically HUGE canyons. 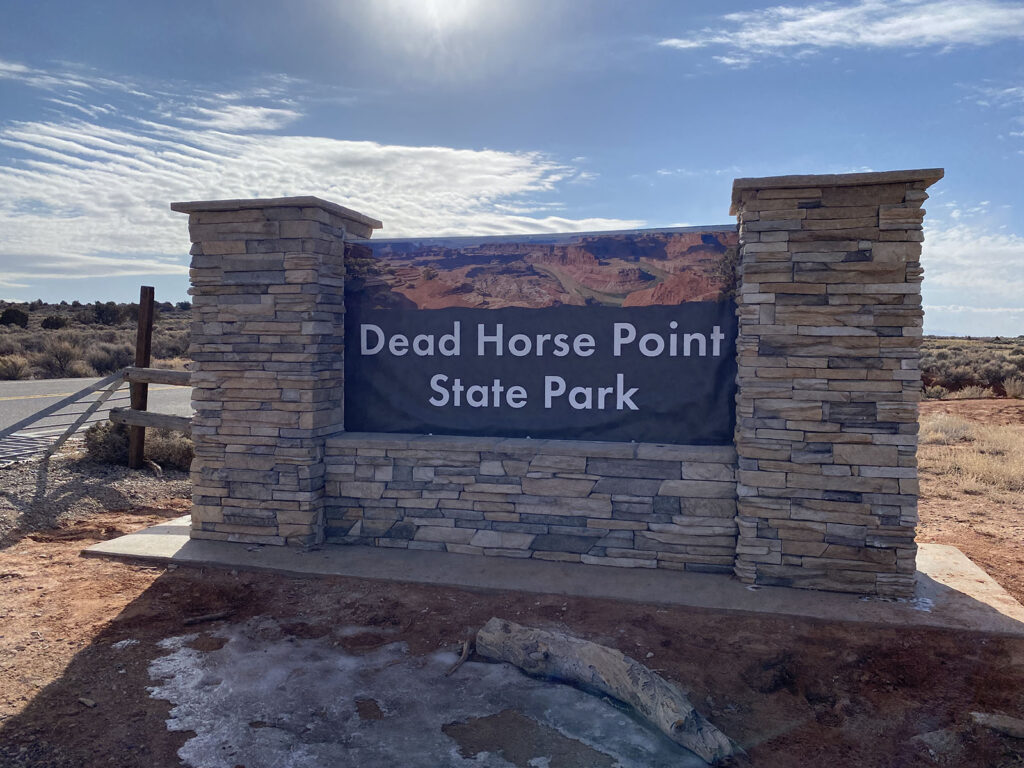 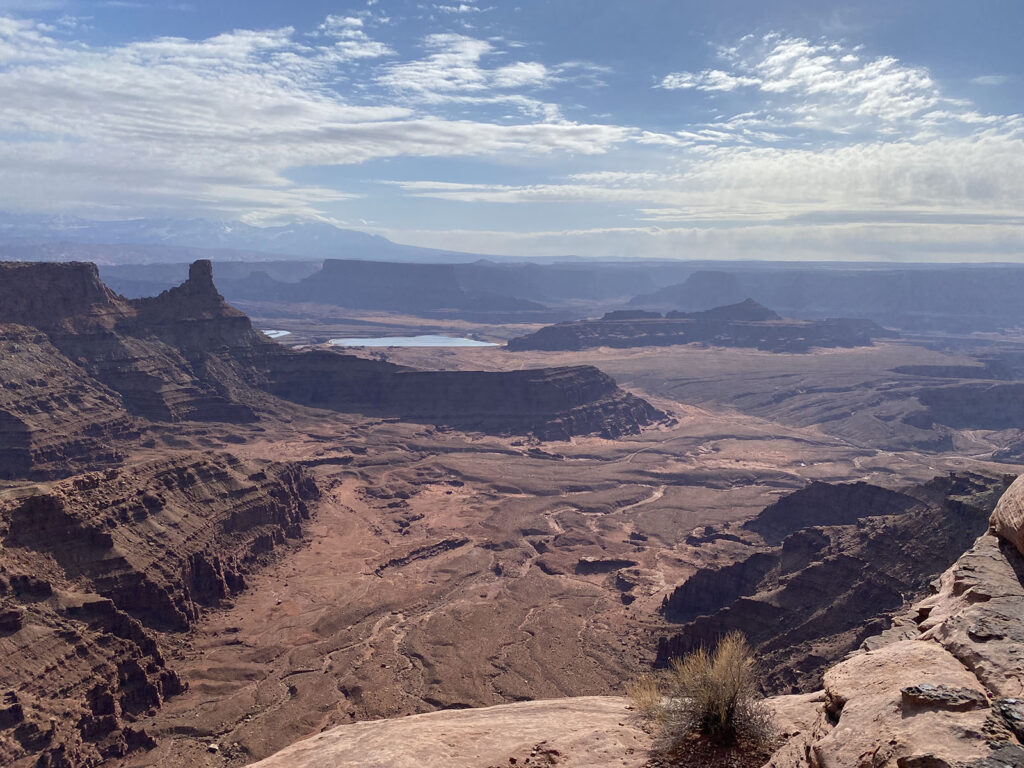 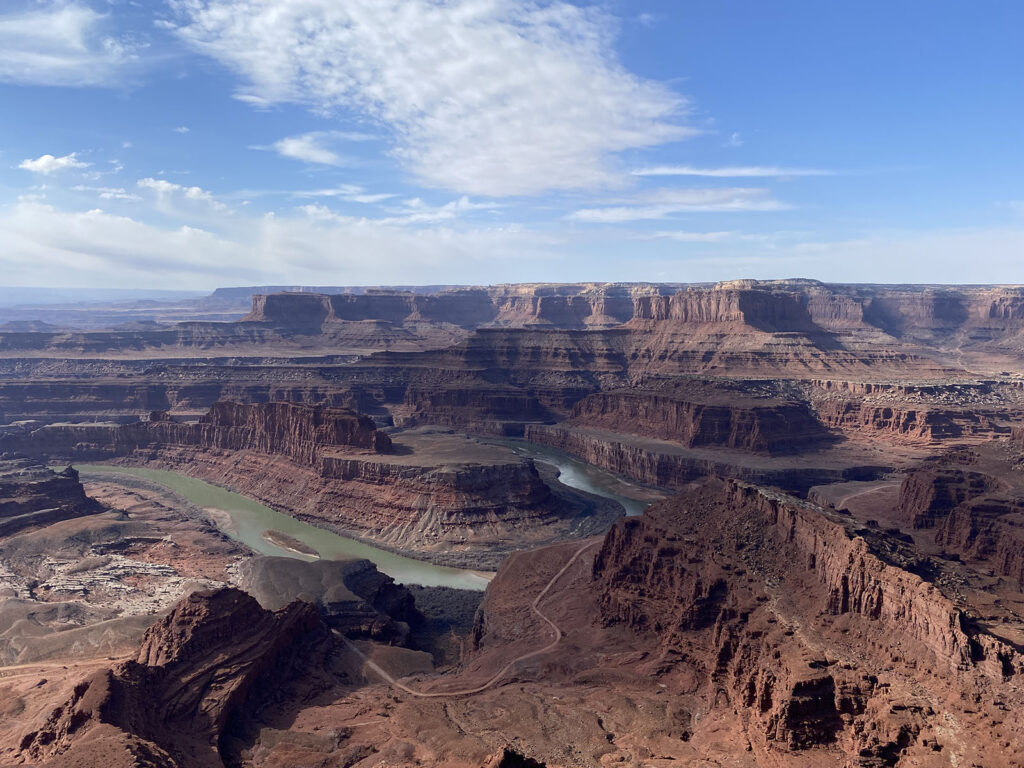 Dead Horse Point, while a very small park, was dominated by a massive canyon and views over the Colorado River, cutting its way through the landscape. Stunning.

From there it was into Canyonlands. Like I mentioned, this park had a very different feel to the others. Zion you are in amongst huge cliffs and you get to hike in and up them. Bryce was all about the spectacular views of the hoodoos and then hiking amongst them. Canyonlands though, it was all about being on an “Island In The Sky” and looking down on the canyons. 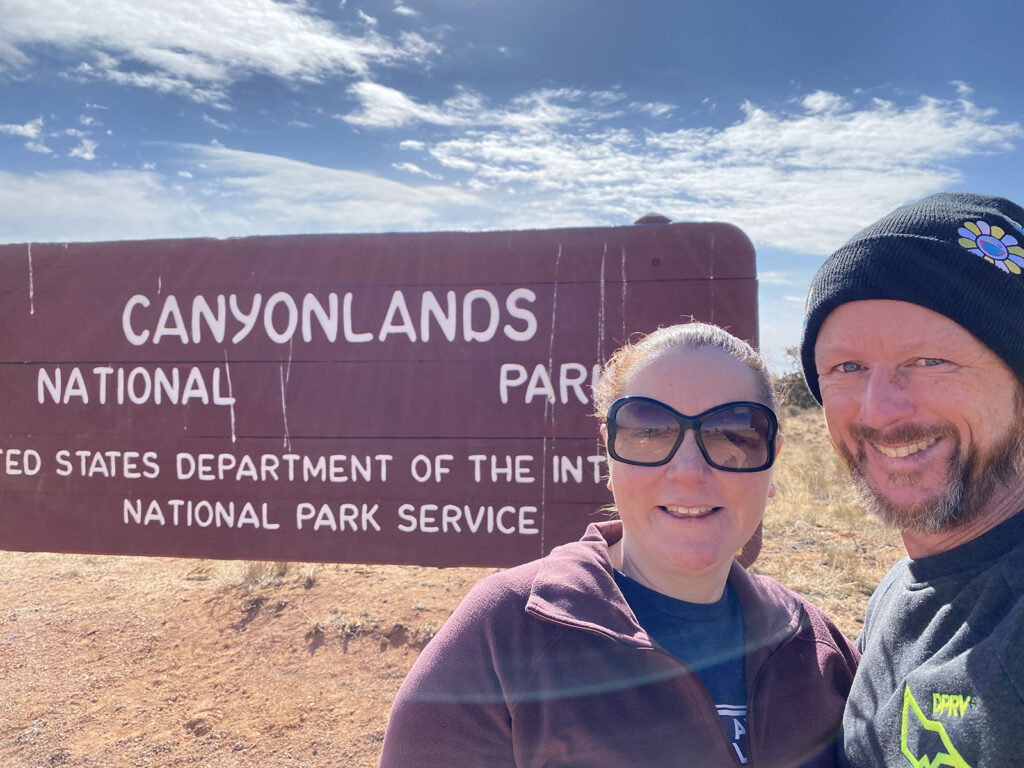 In fact, Island In The Sky was the name of the area we were in. Canyonlands actually is made up of 4 separate areas, and the one we were in was the most visited. We were on a flat of land in the middle of a number of canyons, in part formed by the Colorado and Green Rivers. So it made for a very different experience. 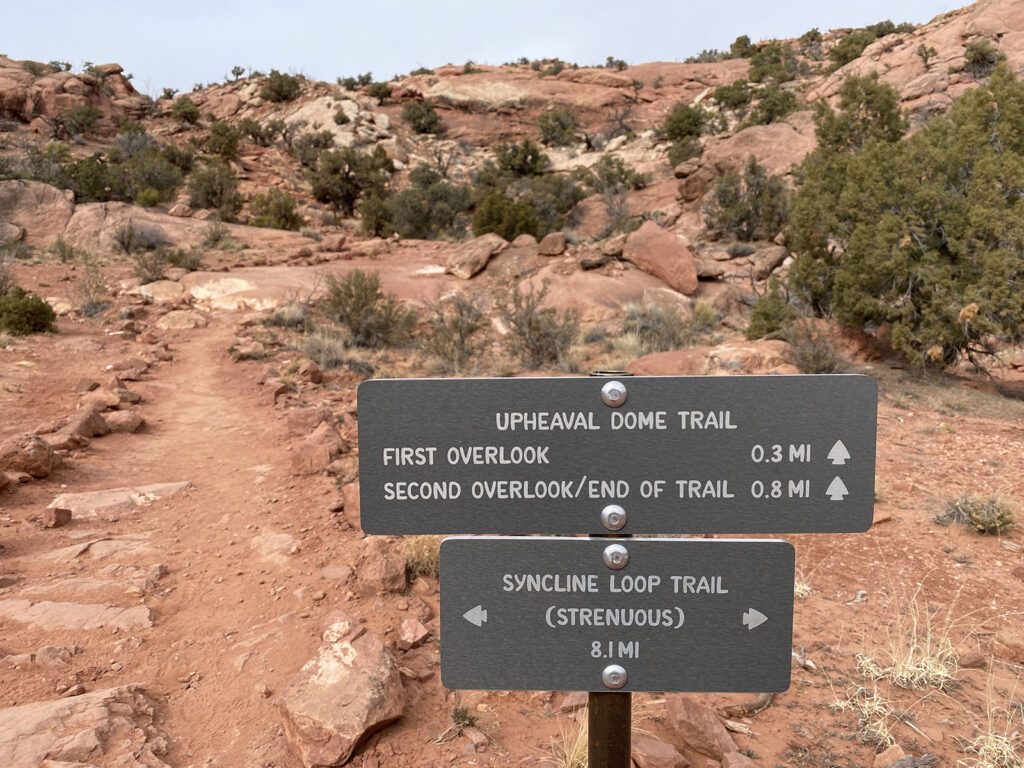 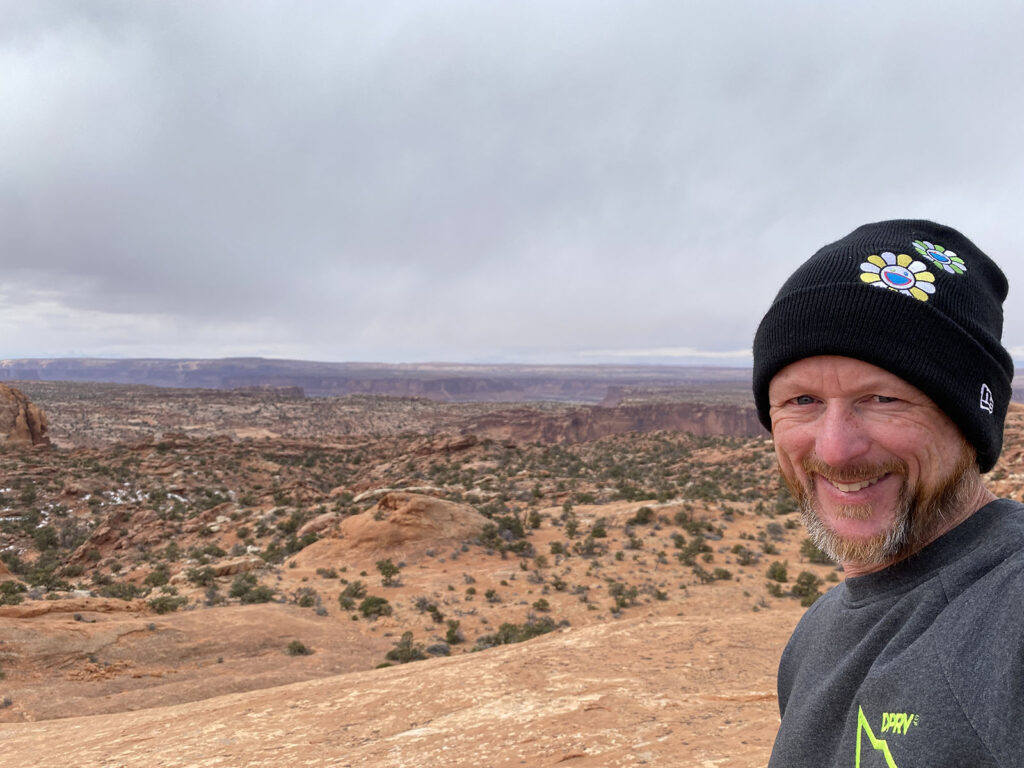 The park consists of several scenic drives, each with their own viewpoints and short hikes. The first hike I did was to the two outlooks for Upheaval Dome, which rather than be a dome sticking up out of the ground was actually more of a crater, of somewhat unknown origin. While not as spectacular as the crater of Death Valley, the second outlook gave me not only amazing views of the crater, but also the other canyons. 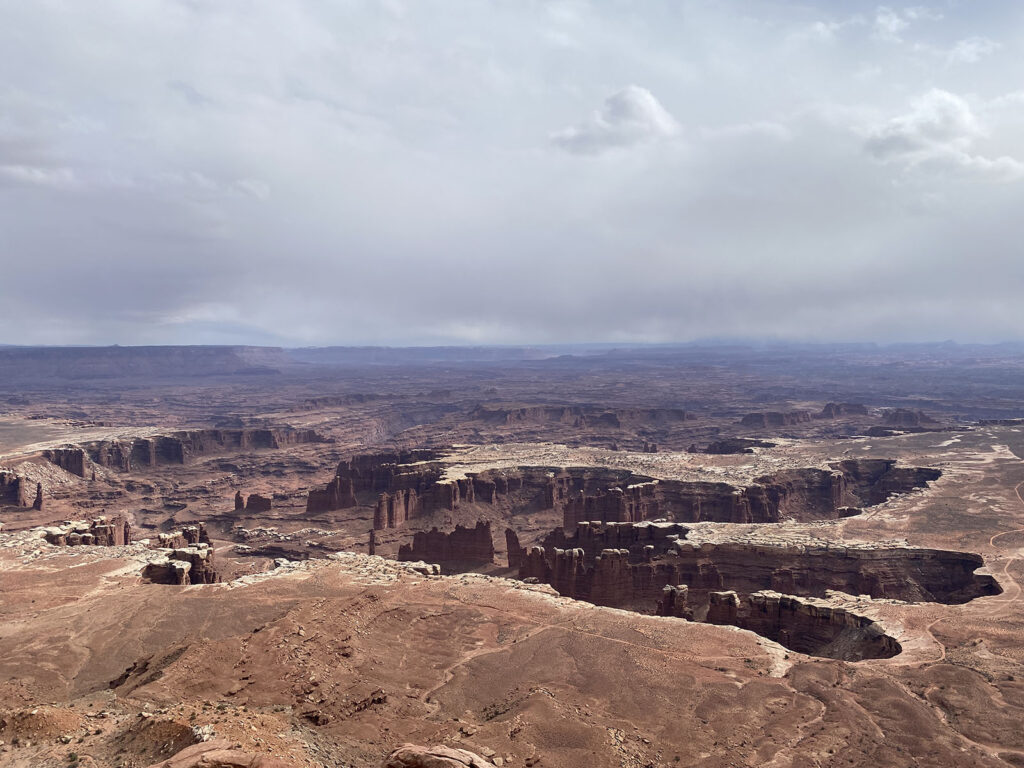 The rest of the day was mostly driving the scenic roads, with stops for viewpoints or short hikes. These included along the rim at some points to give unique views at every turn. 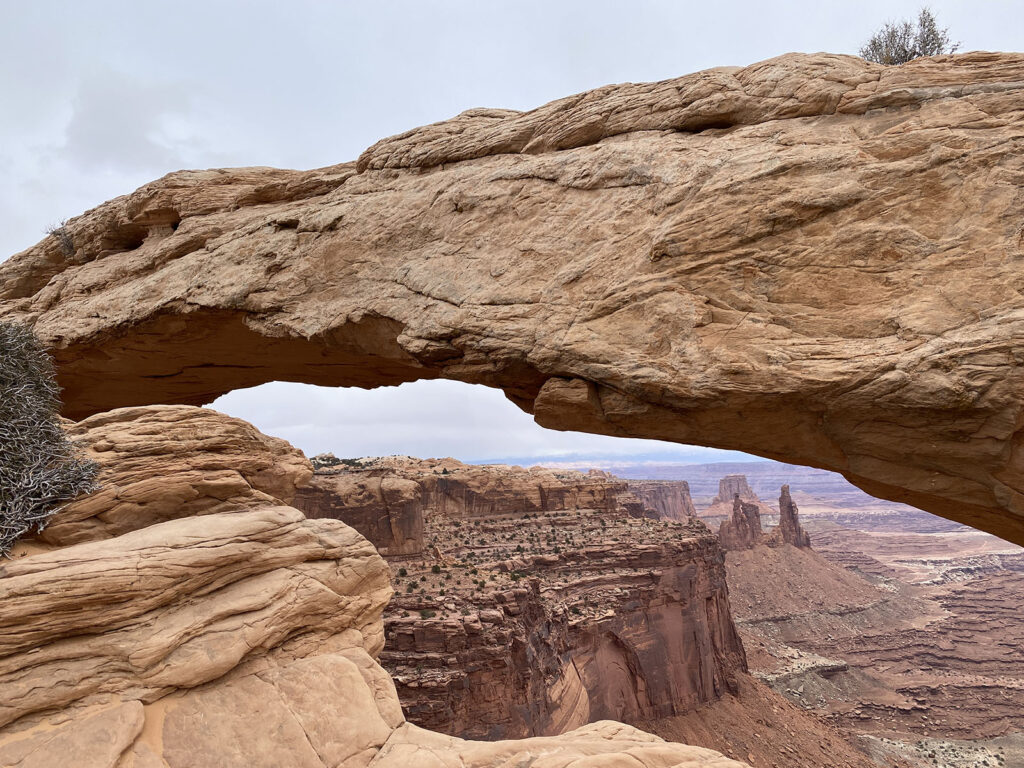 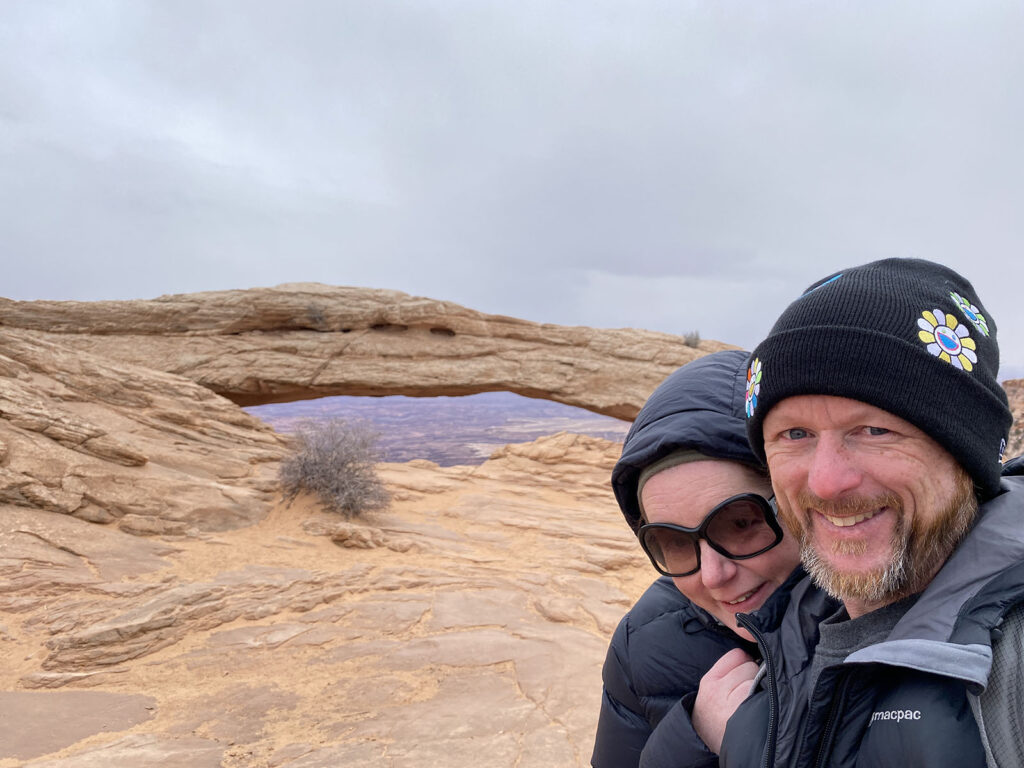 Another feature of Canyonlands is Mesa Arch, a short hike to a rock formation of a large arch, that not only was stunning itself, but very picturesque views through. It was spectacular but thought it may just be an entree for our visit to Arches National Park tomorrow.

It was only mid-late afternoon, but the weather had come in. In fact we were getting light snow on us! So having done the main sights, we decided to wander out of the park, lest we get stuck in the fog and snow. Besides, tomorrow would be a big day in Arches. 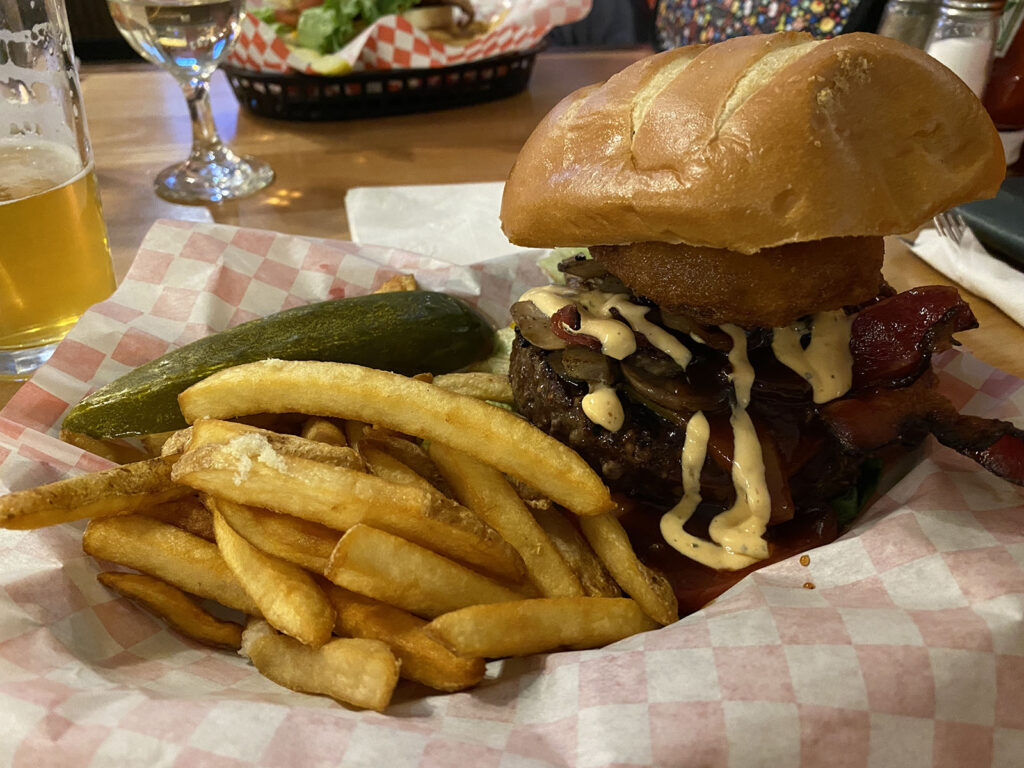 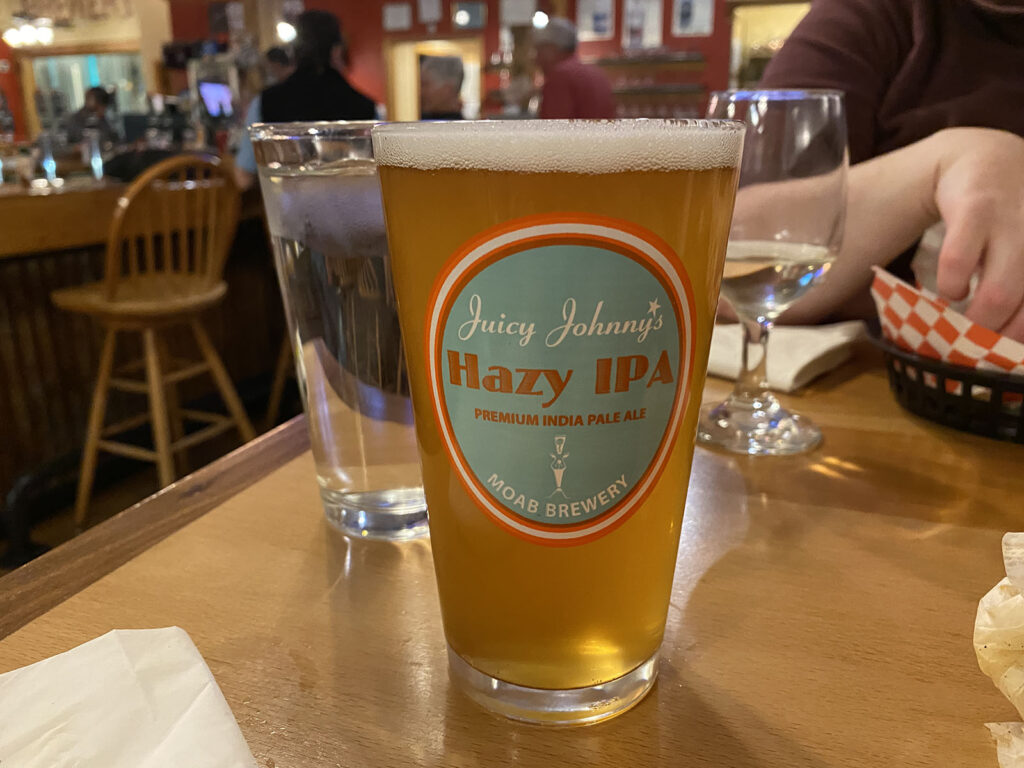 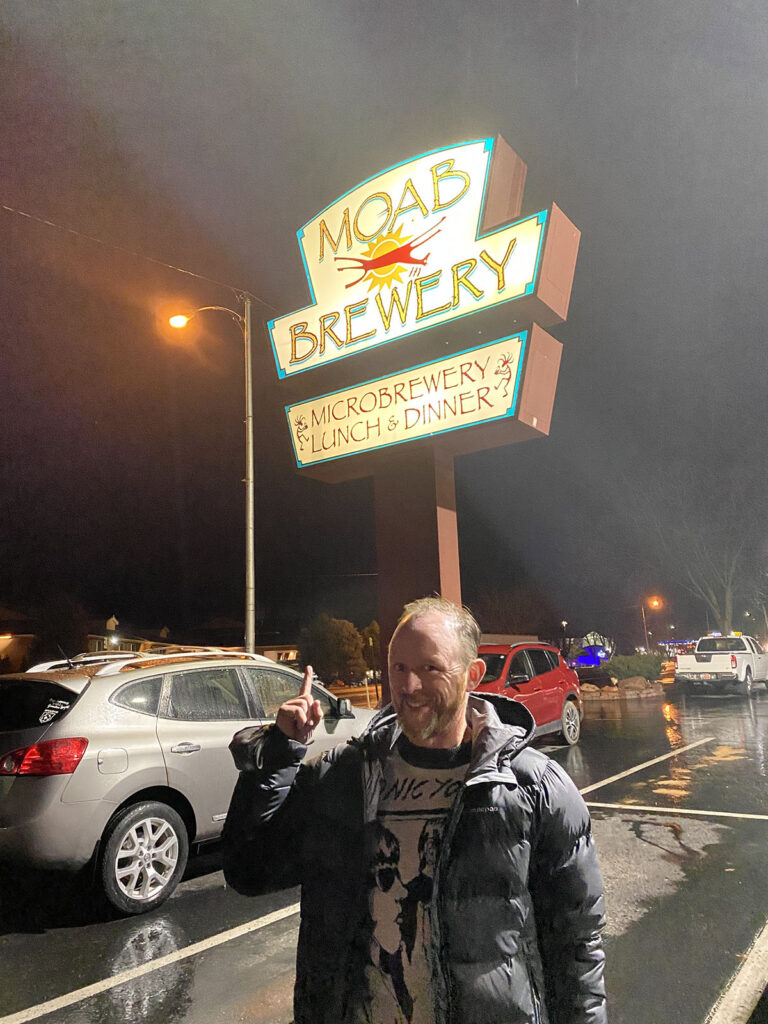 For dinner I strong-armed Kate into a visit to the Moab Brewery. A MASSIVE burger and a couple of pints later (a couple of IPAs) and we were done for the day. Time to rest for tomorrow.