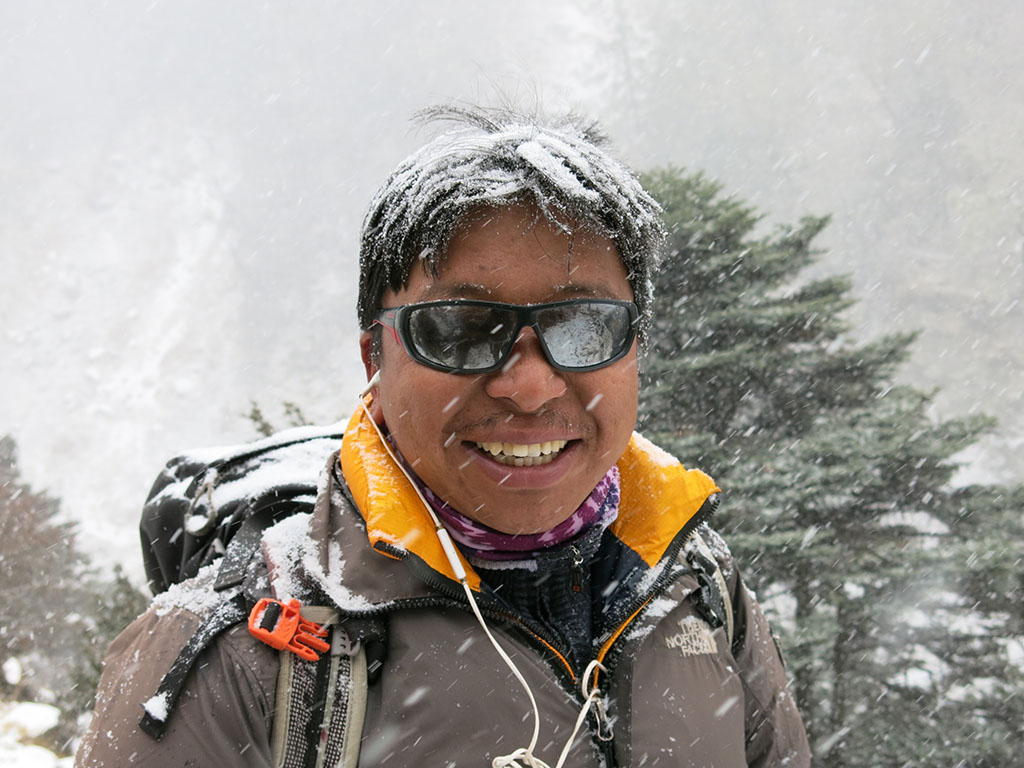 After yesterday’s epic day we were happy enough to just have 7 hours of mostly down ahead of us. As had been the whole trip I was still feeling fresh and enjoying the hiking, so again woke up at my usual early time, got warm in the dining room and prepared for the day. And what a day it turned out to be. 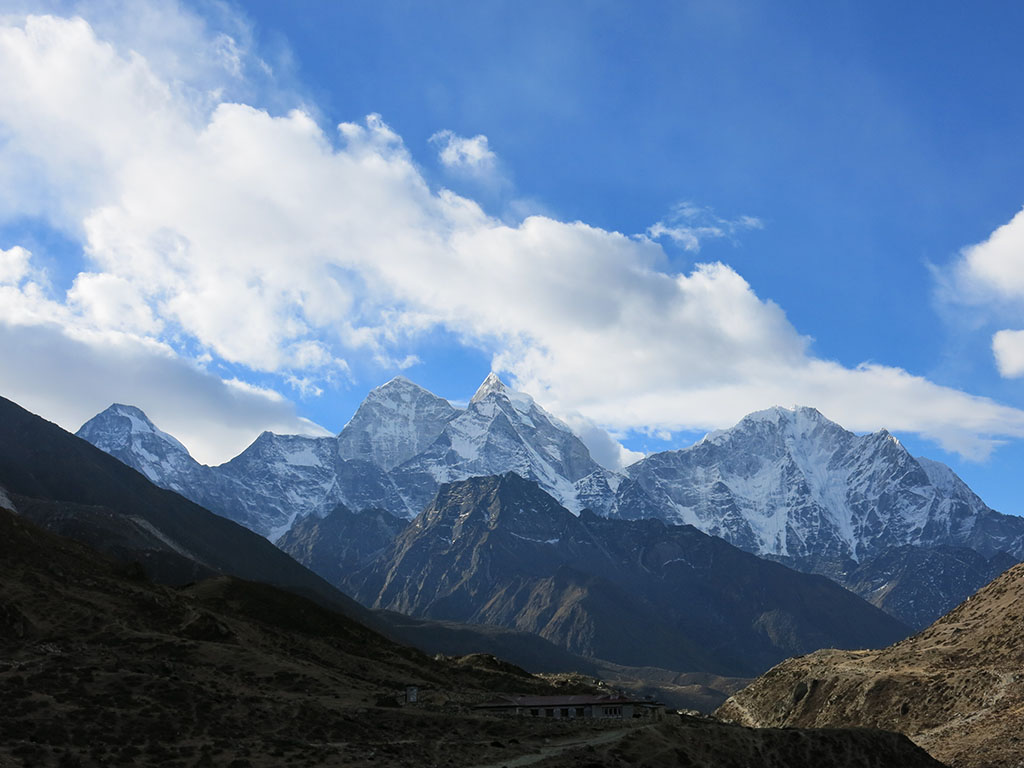 first clouds of the trip!

Pasang had advised us the previous night not to worry about having down jackets handy today, as once we were in the sun, it would be nice and (relatively) warm, and we would be powering down at a fair rate. We had enjoyed bright blue, cloudless skies to that point so there was no reason to doubt him. Looking outside though as we ate breakfast we saw something we had not seen to this point… clouds! We didn’t think much of it and got our gear together and headed out the door.

After about half an hour though we realised it would be a very different day. The clouds had settled in, which meant that the temperature stayed nice and cool. Then the unexpected happened… it started snowing! Yes! 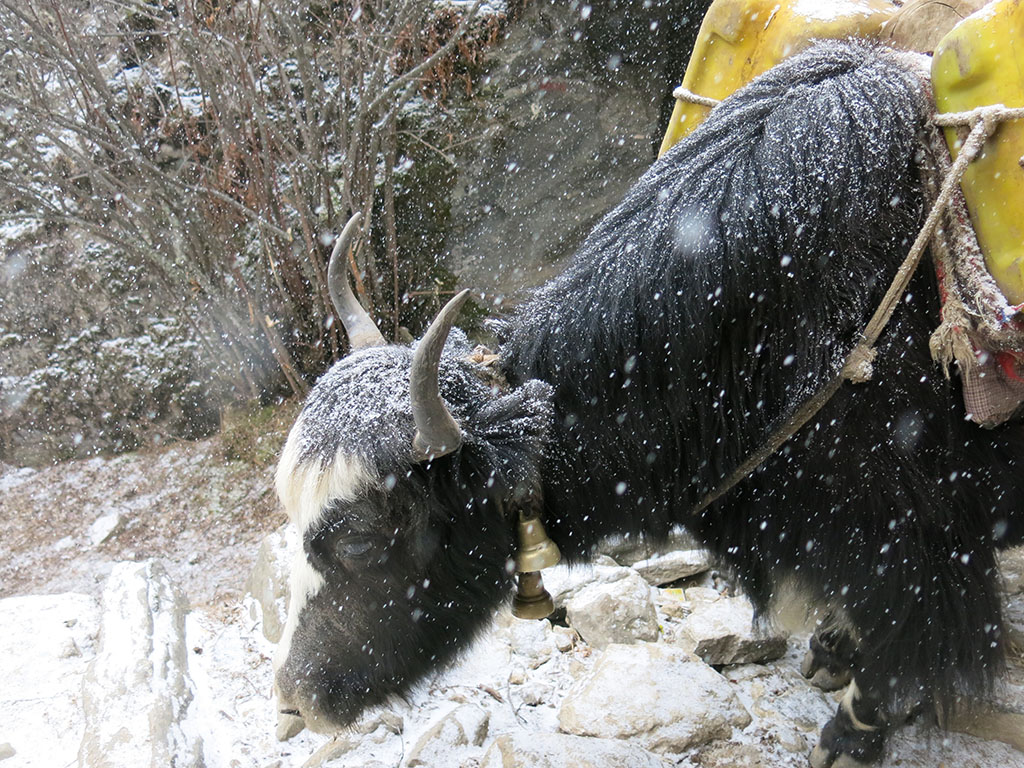 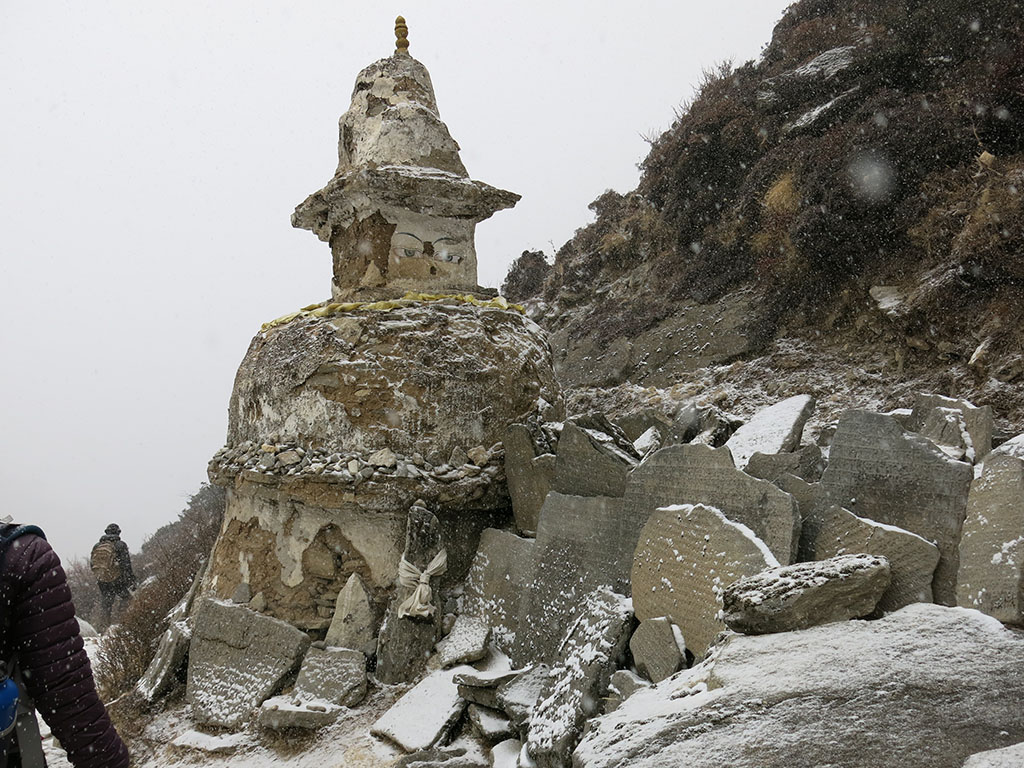 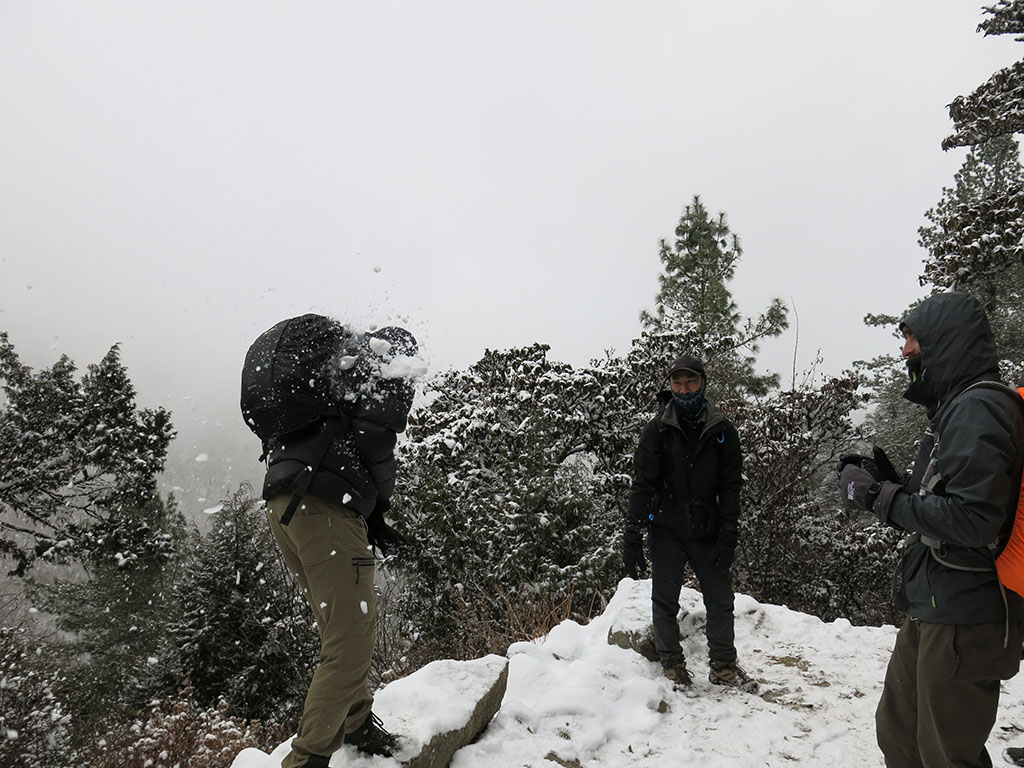 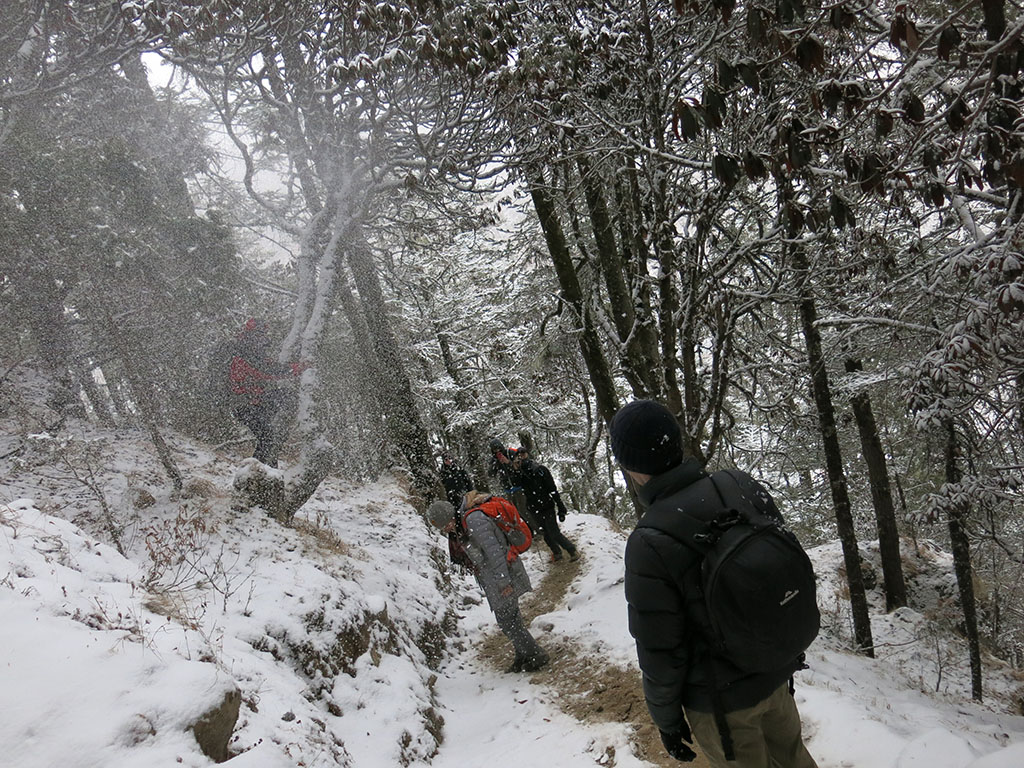 We were all pretty excited. Personally, I had dreamed of being in snow in the Himalayas, and to this point it hadn’t happened. I was disappointed, as our weather had been perfect, but seeing the snow start to fall made me realise how much I had been hoping for it. And for a couple of our group, they had never seen snow before, so you can imagine what it was like for them! Beautiful, dry, fluffy powder snow. At home, any snow falling would be cold and wet and mean a likely miserable experience. This was the exact opposite. The snow was so dry and light, that it just brushed off, meaning there would be plenty of snow being thrown around throughout the course of the day. 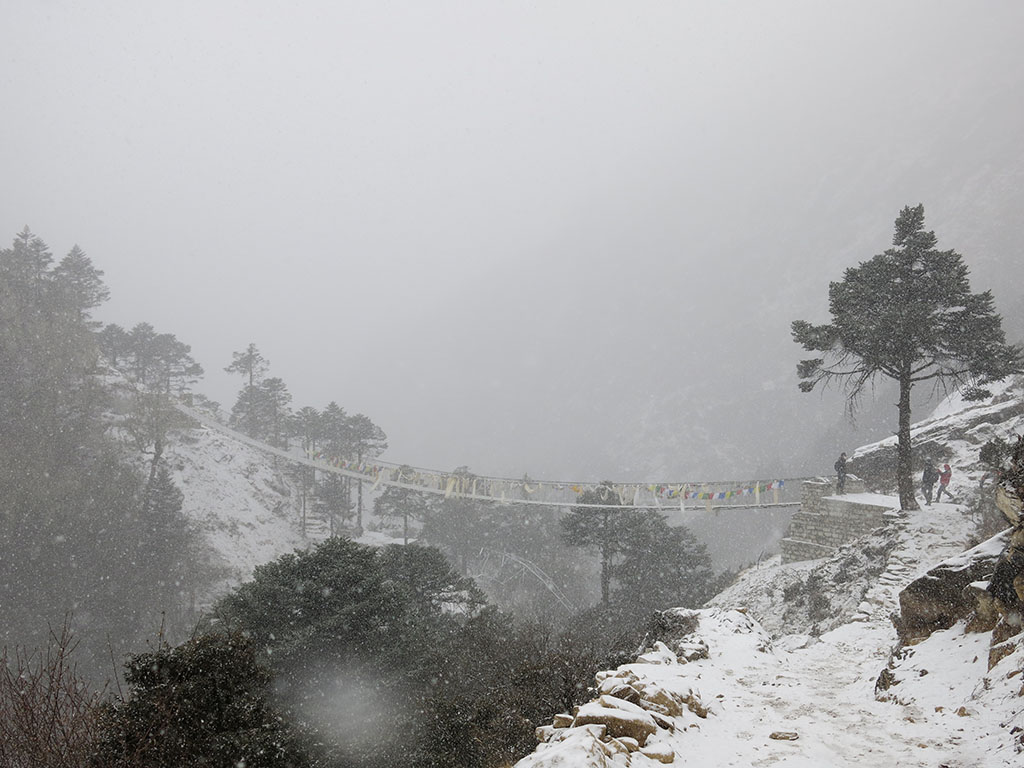 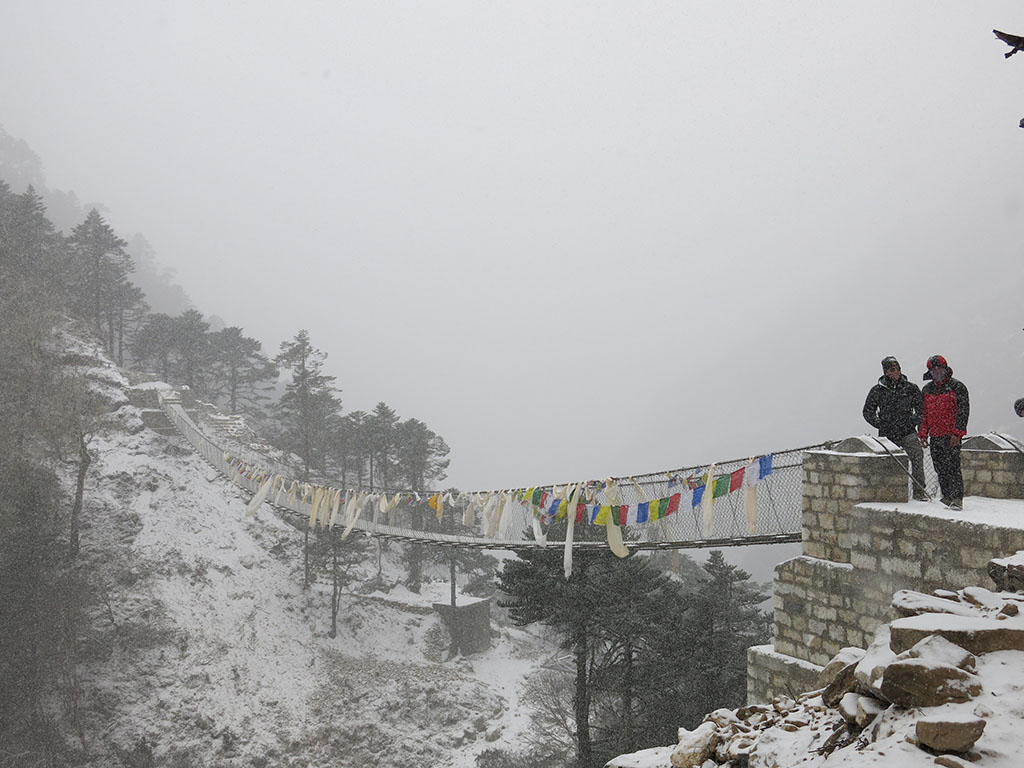 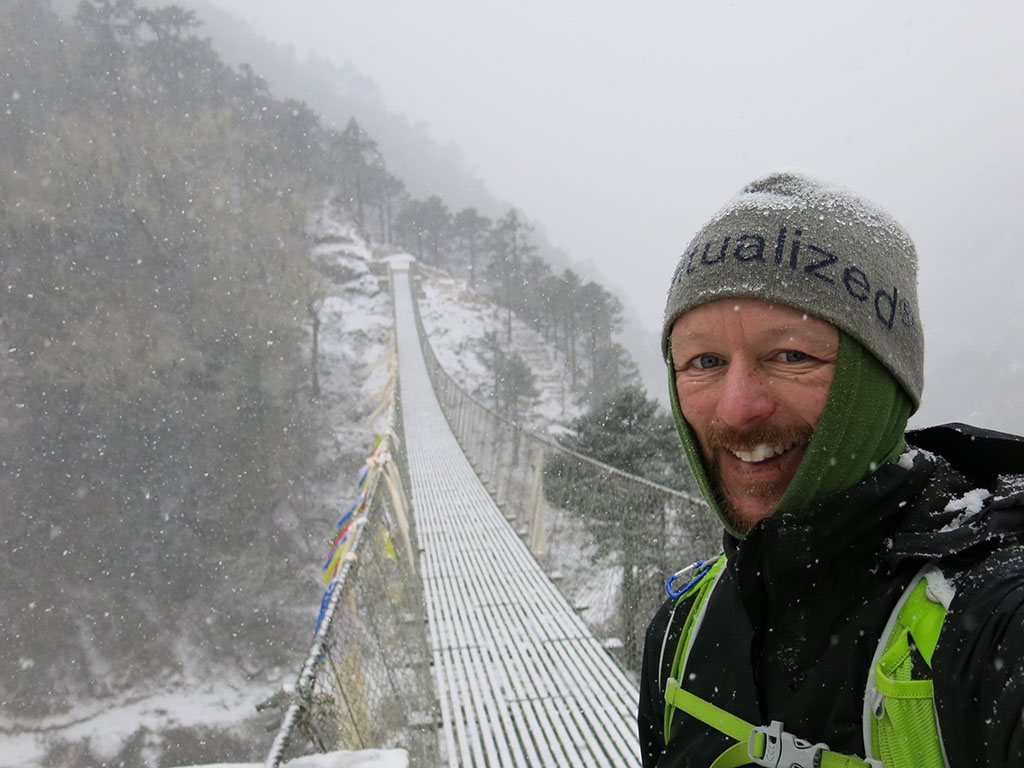 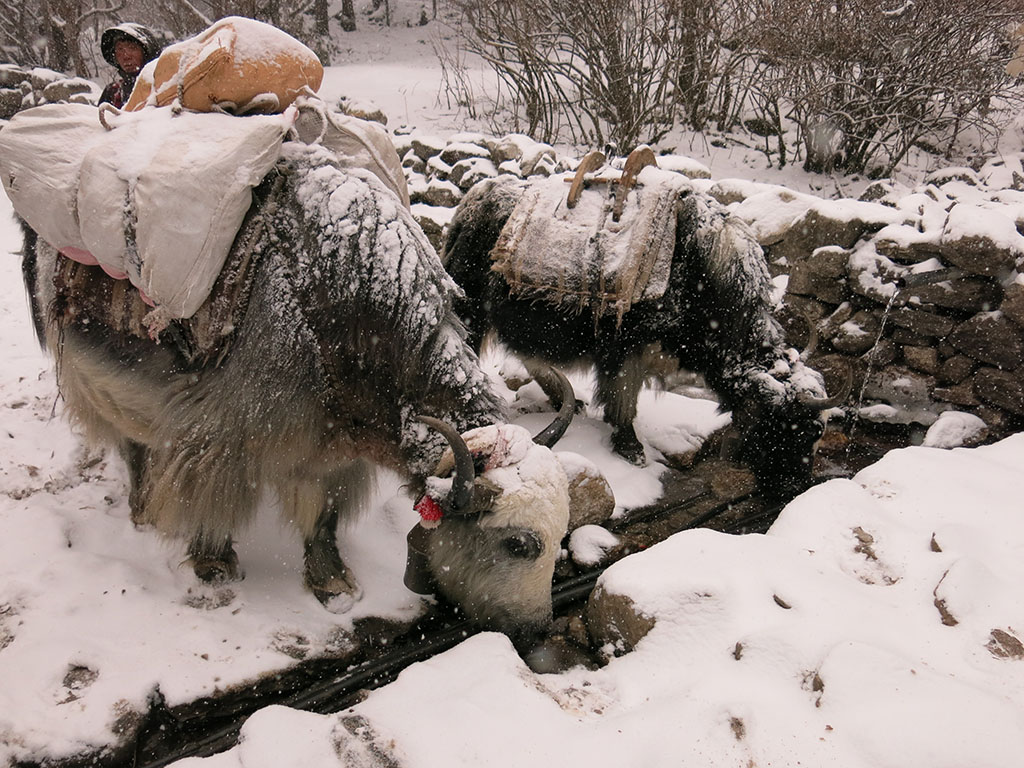 We dropped into a tea house to adjust our gear. Even though it was dry, the temperature was still quite cold so the down jackets were retrieved.  Layered up, we headed down at a fair speed. The snow wasn’t slowing us down at all. The odd part of the trail would become a little more slippery, but otherwise it was magical. Every now and then you would cop a snowball in the back of the head from cheeky Pasang, or find Mingma up a tree ready to shake snow on to you. They sound like simple trivial things, but being in the beauty of the Himalayas with your great hiking crew meant these things would be etched into the memory banks for a long time.

It was surreal to compare our landscape with that from just a few days ago. Gone were the dusty brown trails, and now we had glorious white everywhere. Getting to the treeline made it even more spectacular. 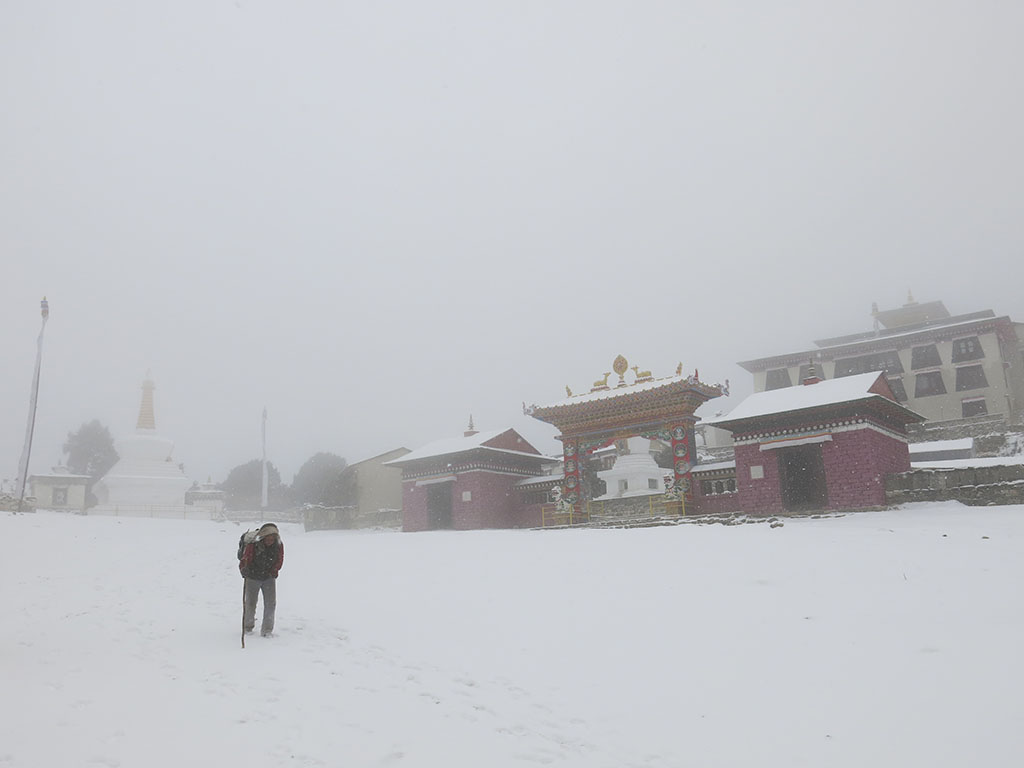 We arrived back in Tengboche (home of the monastery), now looking like a completely different village. We settled in for lunch, chatting with another traveller who was on his way up, lamenting the snow and the delay it was likely to cause him. We just let him know that it was making for spectacular trails and not to let it slow him down. 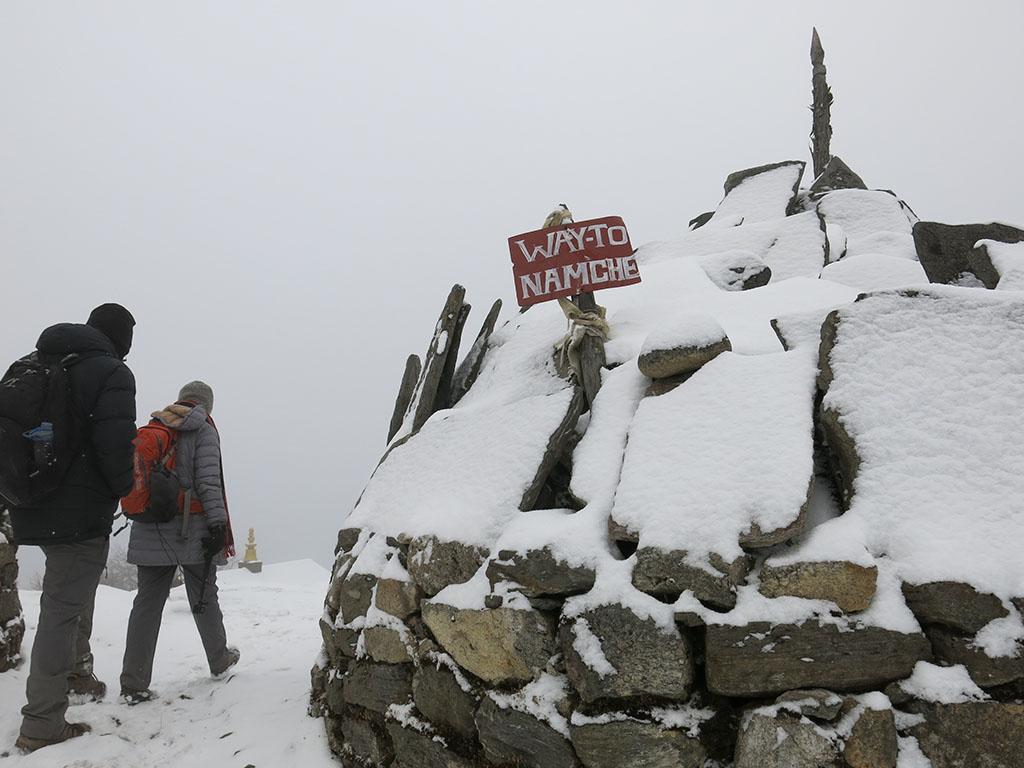 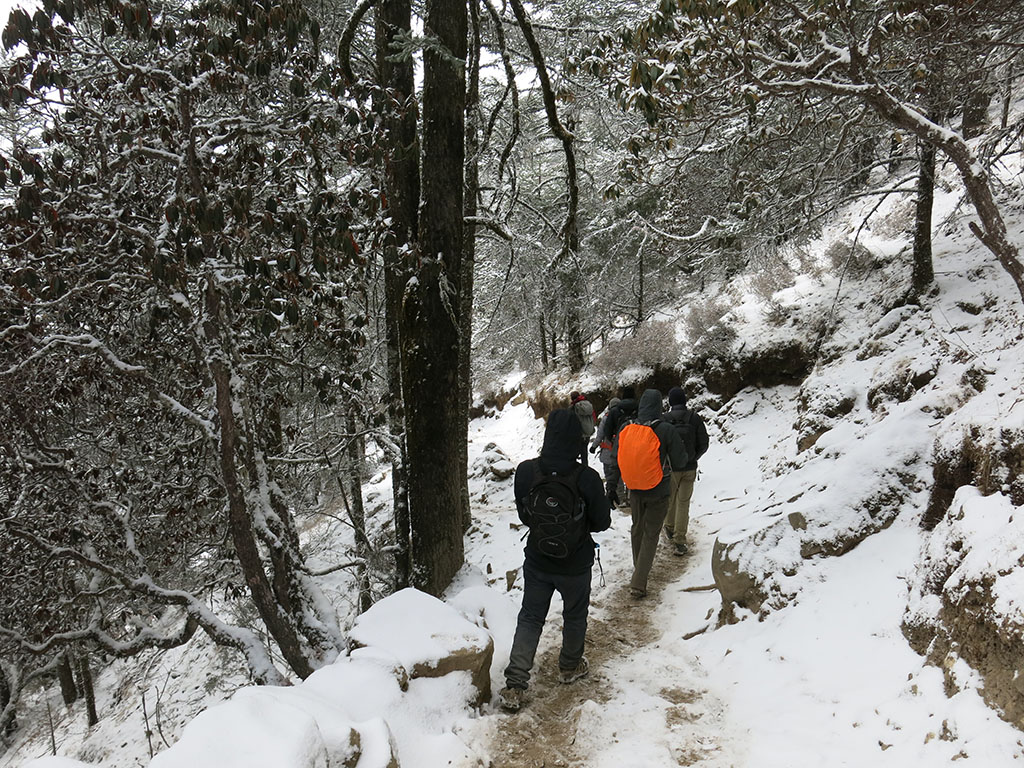 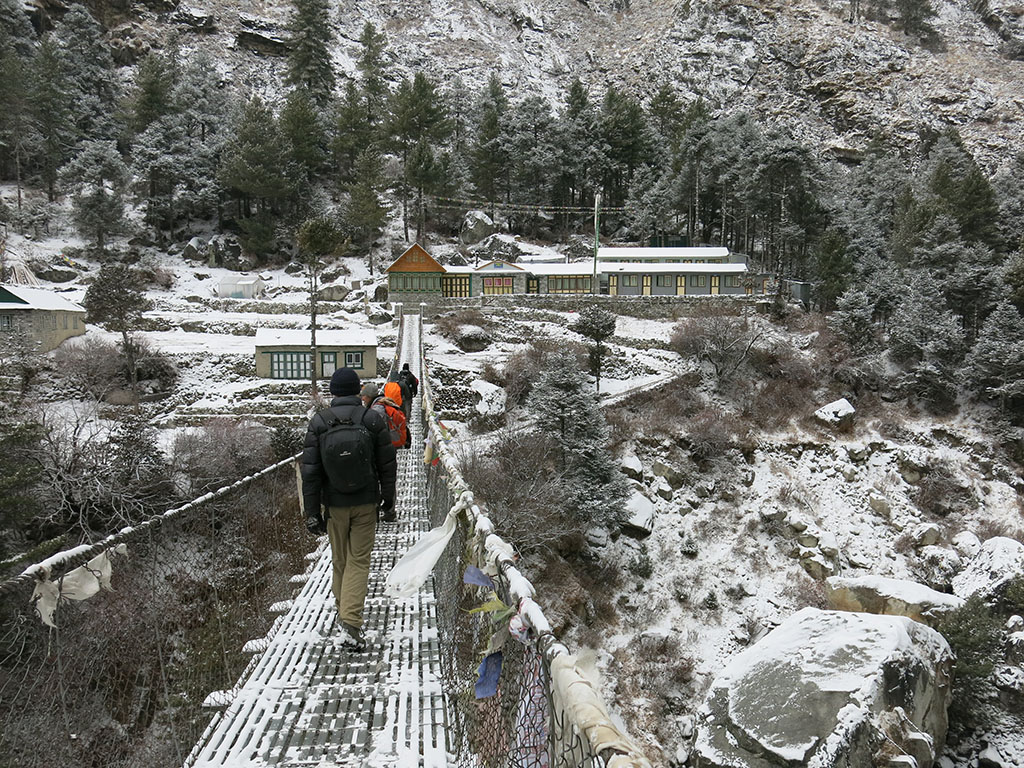 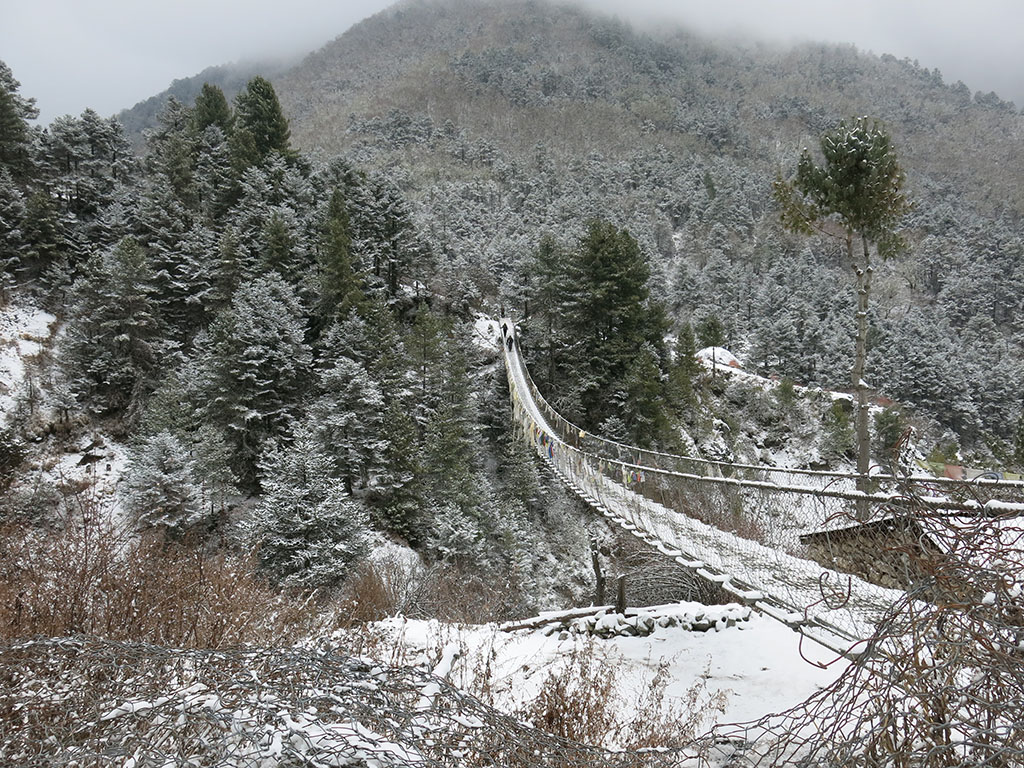 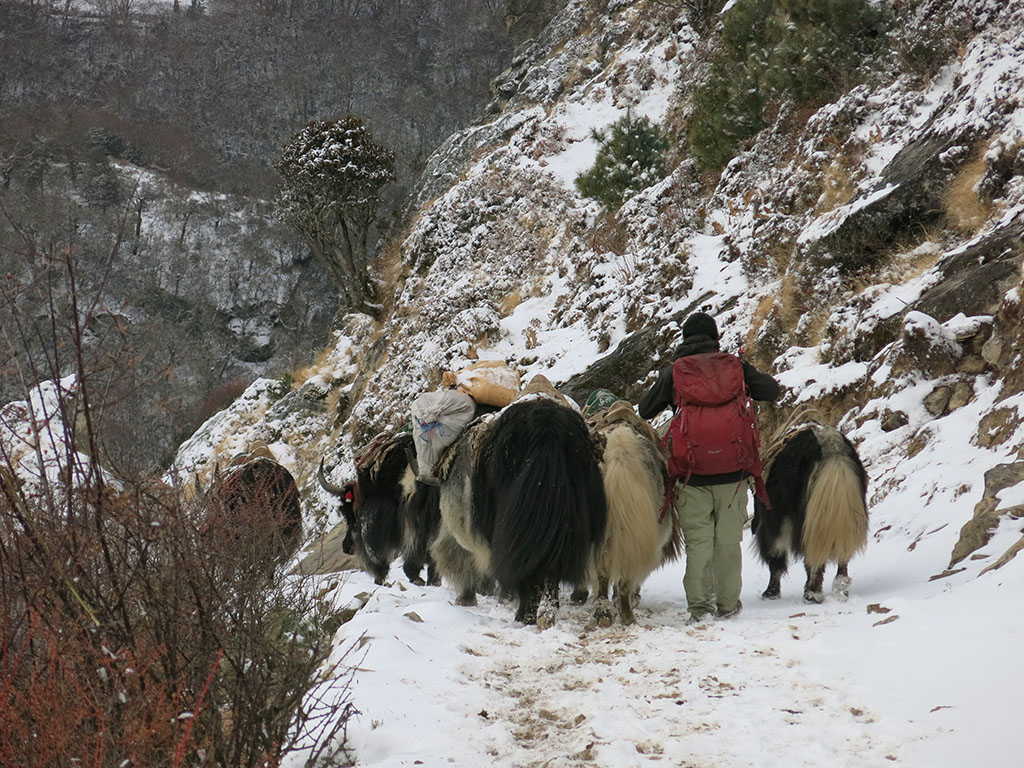 The snow was steady as we left. 3 hours of hiking awaited in the falling snow… the first half downward, and then the last 1.5hr back up. Again, the snow was gorgeous and not holding us up at all… it was just making an amazing trip even more special.

Around 4pm we arrived at our tea house in Kenjuma. This was one we had popped in to on the way up, happily for us the one with the puppies. Only one puppy remained, with the other having gone off to different owners, but that still meant we had some puppy fun throughout the night. A perfect way to end a pretty perfect day.