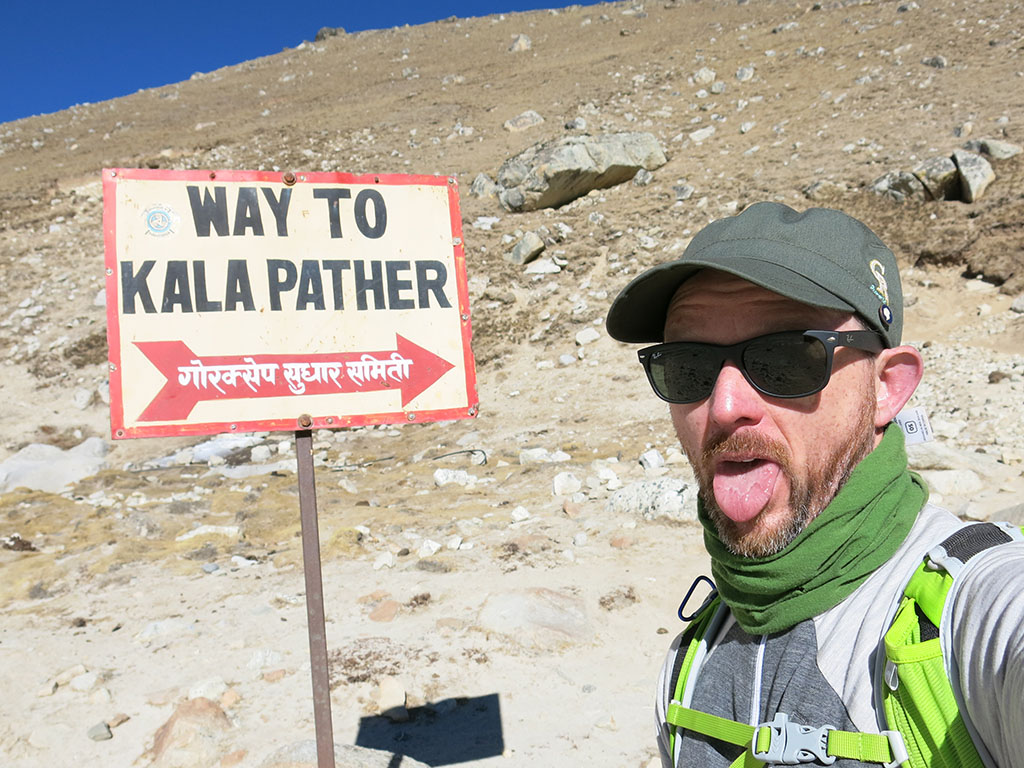 It all started at 5am. Yep, 5am.The plan was to hike to the top of Kala Patthar (also spelled Kala Pather), a mere 5600m and 250m higher than Base Camp. It was a 5am start so that we could get to the top to experience sunrise over the mountains, including Everest.

So off we went. Damn, it was cold. Pasang said it was a brisk minus 16 degrees, but this was really the only time during the trip when we really felt the cold deeply. It was also steep, the steepest we had encountered. That all made for a challenging morning! It was VERY slow going. Even those of us that were feeling pretty good were struggling with all the conditions. I was OK, just very short of breath and could feel my heart rate going pretty high. But I was warm enough and never felt as if I wouldn’t be able to do it. 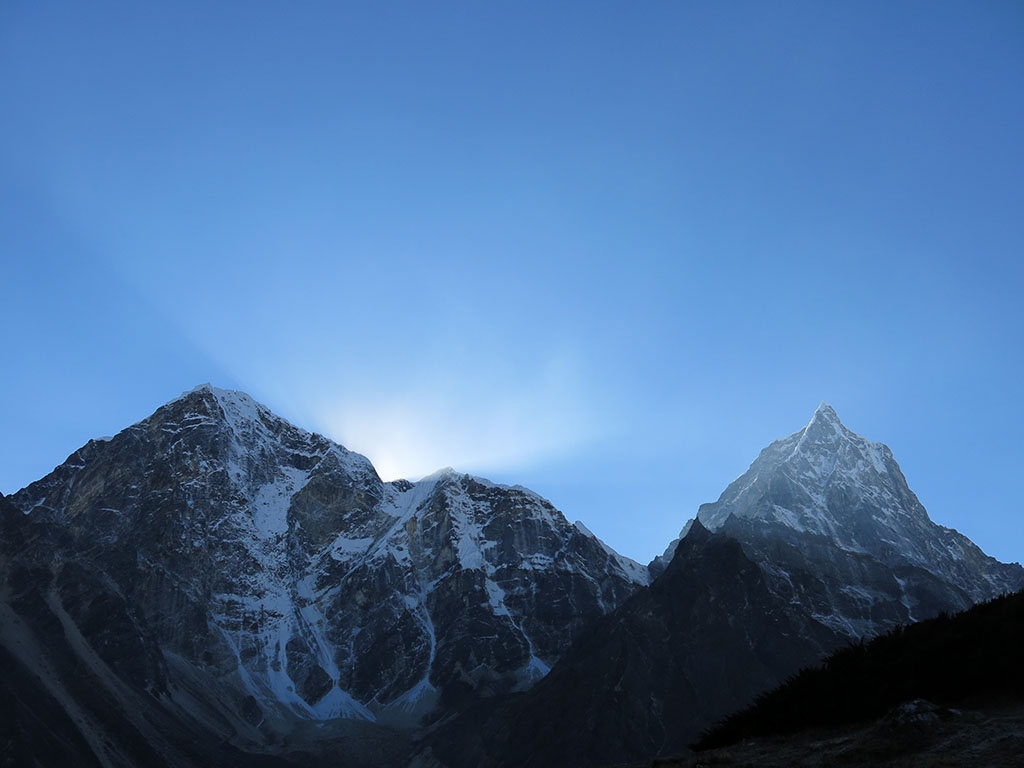 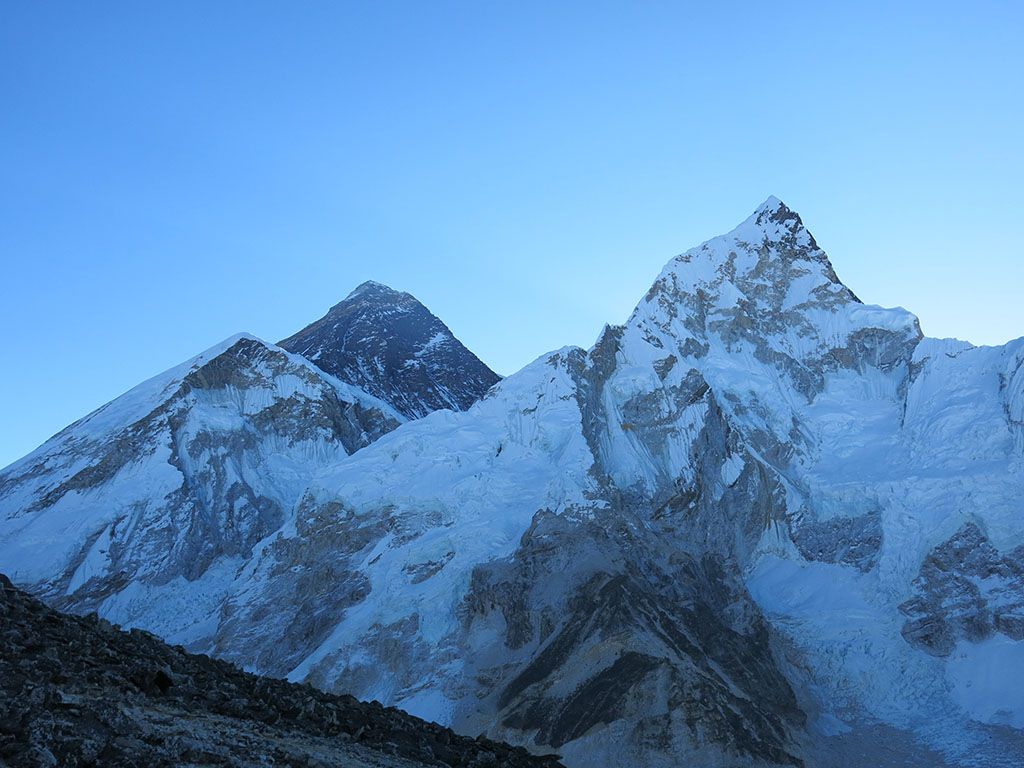 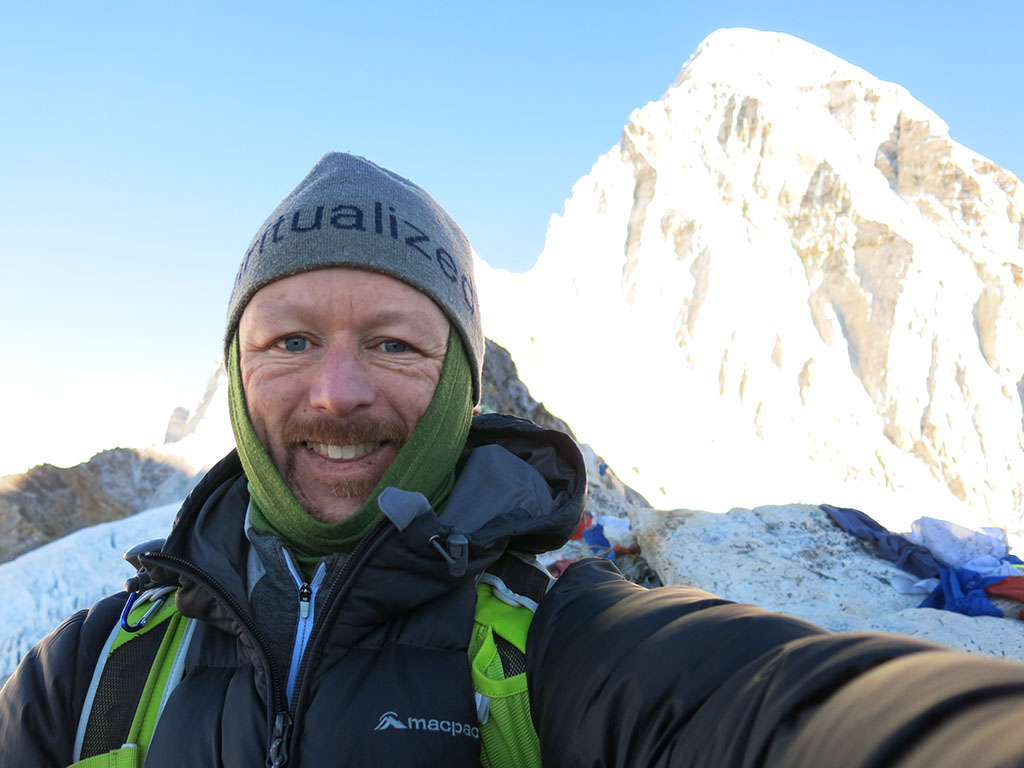 At about 7:45am we made it, just as the sun was starting to pop over the peaks of the mountains. It was actually pretty emotional, just like Base Camp. We were all exhausted and it dawned on us that we had made the epic trip together so were all super proud of each other. At the top we had 360 degree views of everything, including a picturesque Everest.We thought we may not spend too much time at the top but the conditions were pleasant now the sun was up so we hung about longer, like yesterday getting as many photos as we could. We were all just happy to rest too! 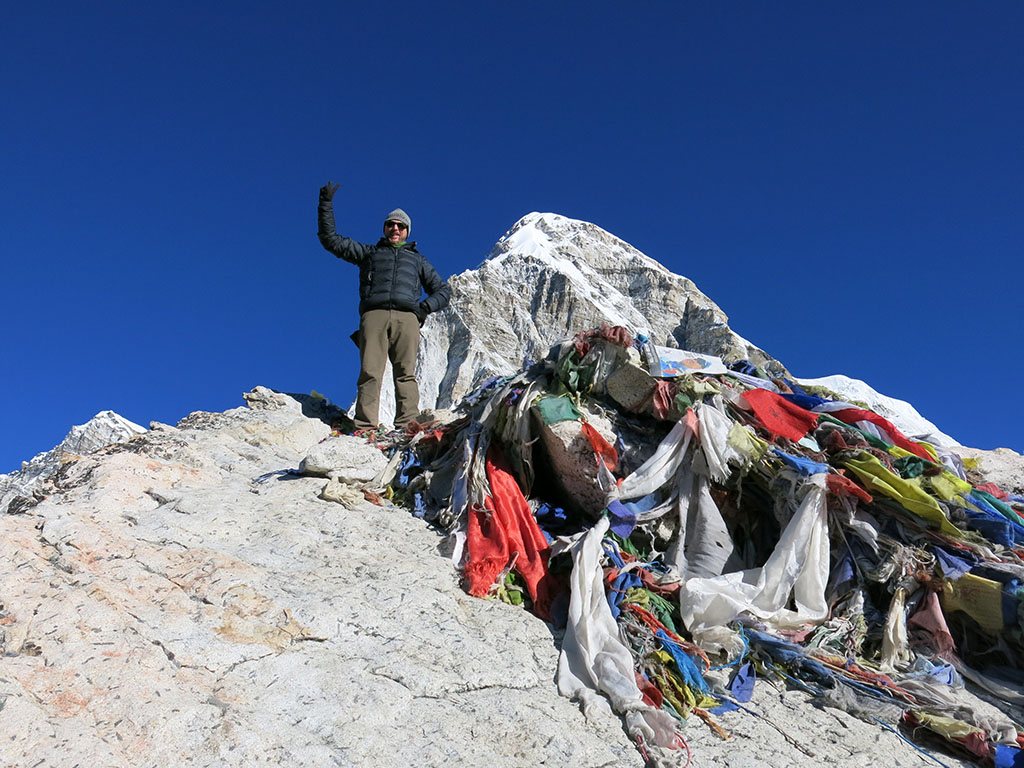 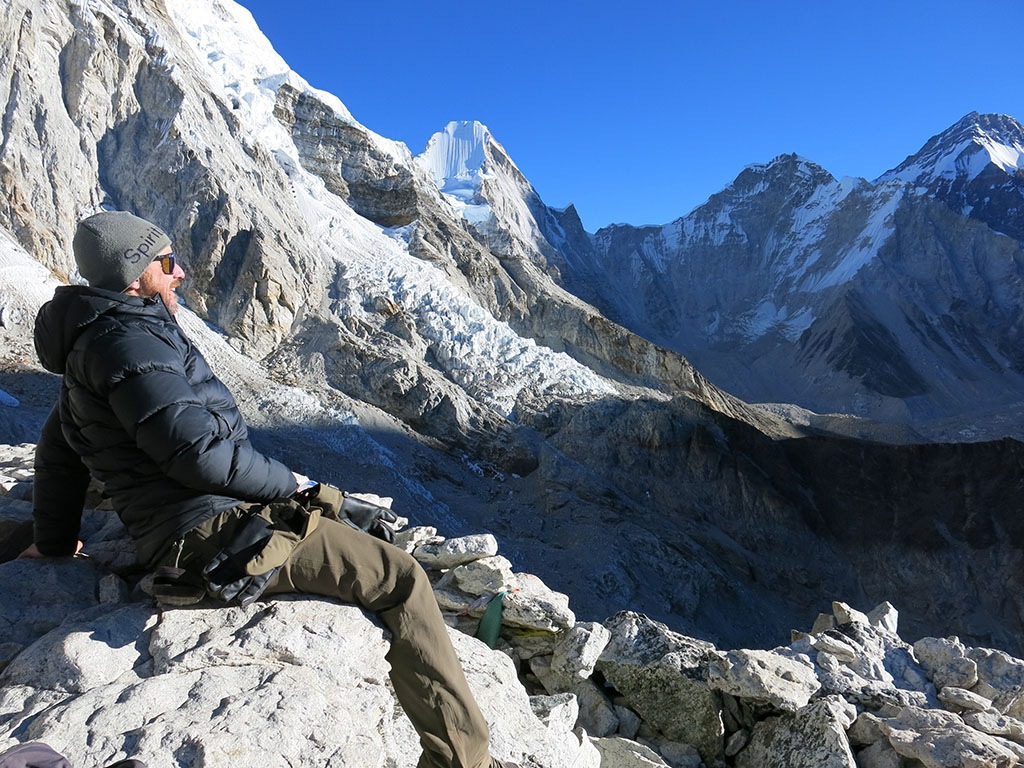 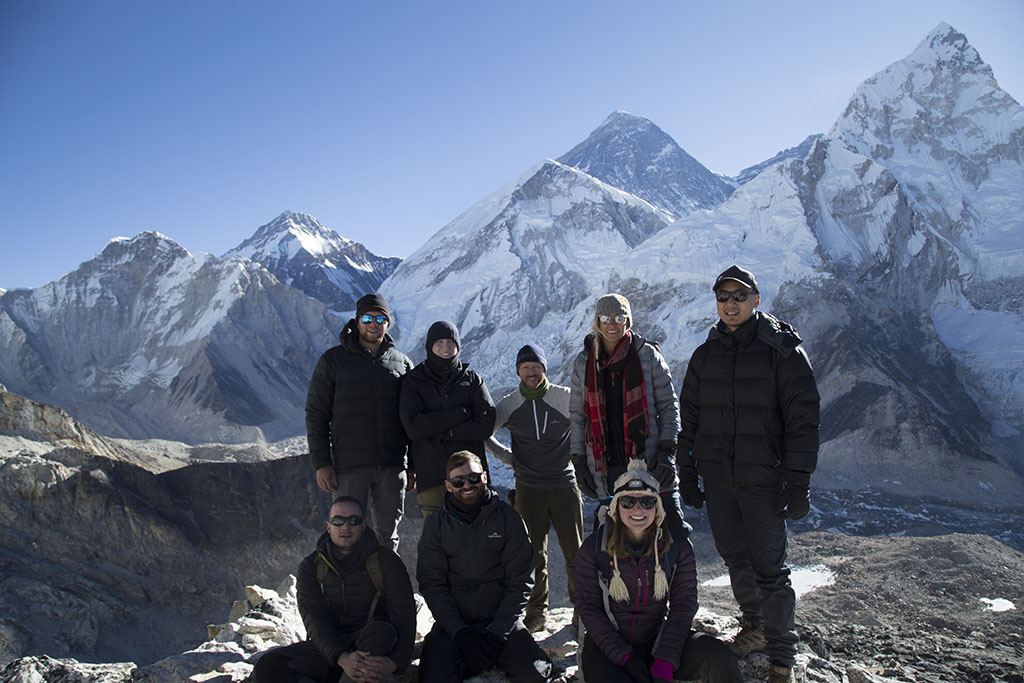 Exhausted or not, with Kala Patthar conquered, it was time to head down. This morning had only just scratched the surface of what we had to achieve for the day, so we couldn’t delay much more. We had a LONG way to head down, so it was back to Gorakshep to rest (it only took us 45 minutes to get back down!) and have some breakfast. 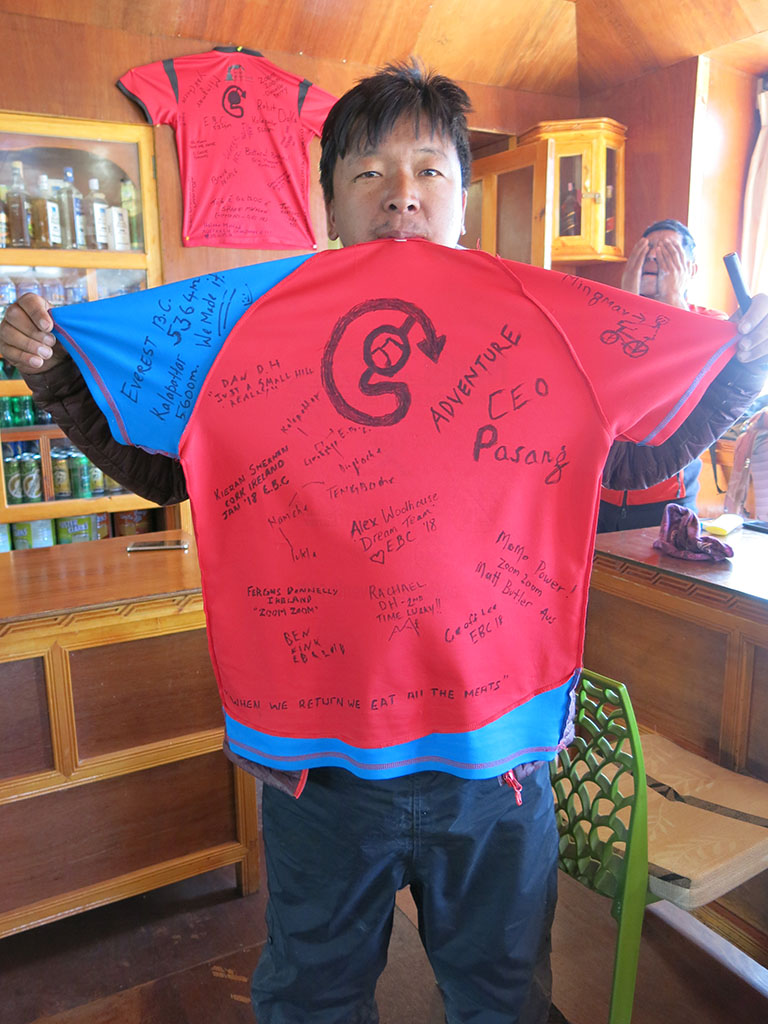 Everyone was in various states of exhaustion. Even though I was doing pretty well, it took a fait bit of mental fortitude to summon up the energy to get the backpack back on the back and start the descent. We still had 6 hours of hiking for the day to go and that messed with everyone’s heads. Before we left Pasang got us all to sign a shirt which we tacked up onto the room of the tea house. It seemed many of the groups were leaving mementos in the tea house, so who were we to break with tradition?

But eventually we all got going and begrudgingly headed downward. Most of us had music in our ears to spur us on. It was mostly the same track as the earlier days, being able to stop in Lobuche for a brief lunch and then keep going. Down was going well, and when we were headed downward everyone was doing OK. But when we had to head back up it was a killer. 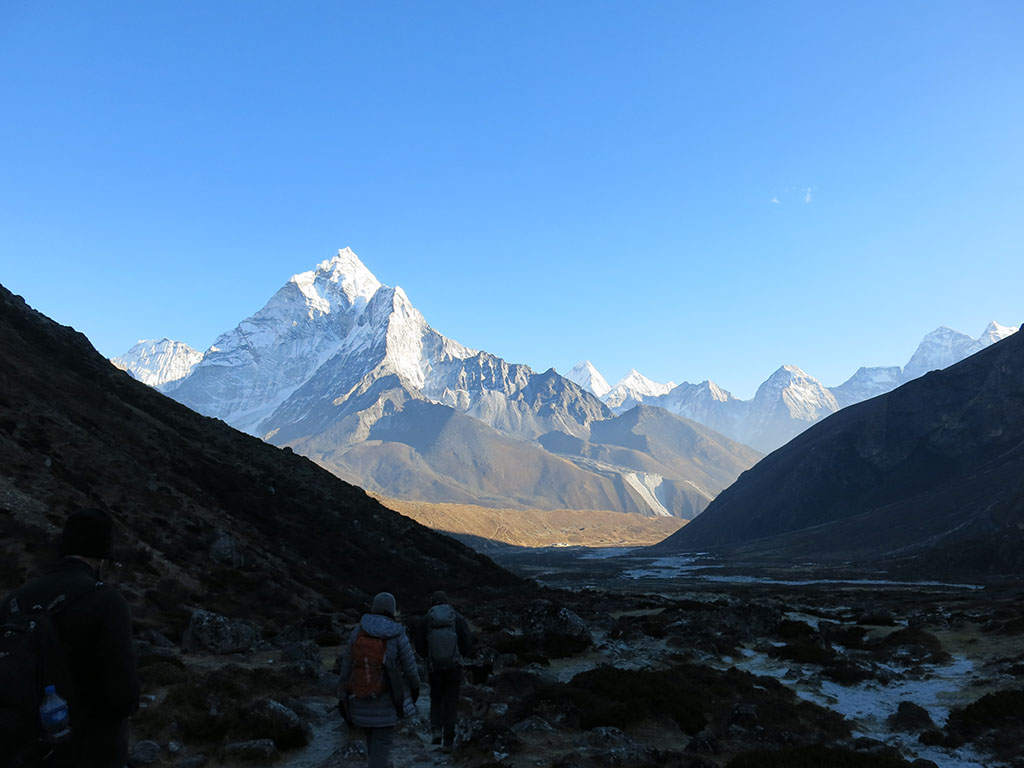 Eventually we took a turn from our previous path… instead of back from Dingboche, we headed down into a chilly valley to make our way to Pheriche. The sun was creeping below the mountaintops meaning we started to feel the cold. But the terrain was nice and flat and we all felt great powering along on it, and in what felt like no time we made it to our evening accomodation. For the last hour a friendly local doggo wandered along with us, ensuring that we intrepid travellers made it to our destination. 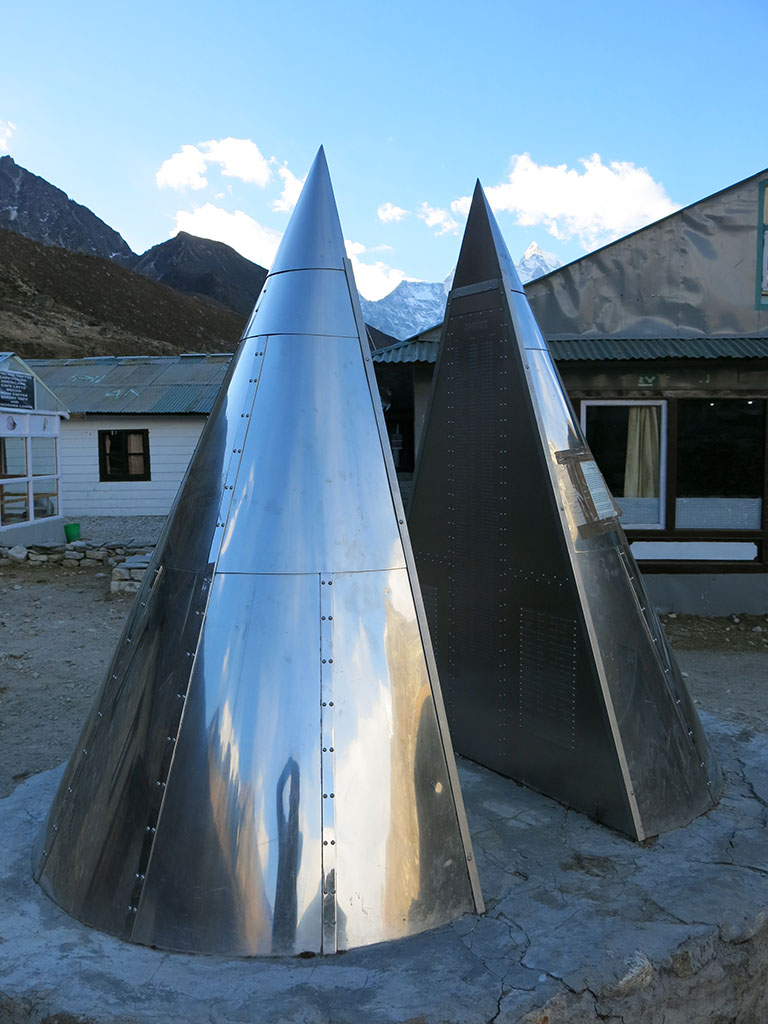 In the village, just outside our guest house, was a monument for all who had died on Everest. Sadly the list of names was long, and my friend Maria was up on there which was quite a sobering end to the day. Her amazing feats had been at the forefront of many of my days in the Himalayas and I made sure to leave prayer flags here and there in her memory.

All of us were exhausted and after dinner there wasn’t too many hours of cards before we all had a well earned nights sleep.