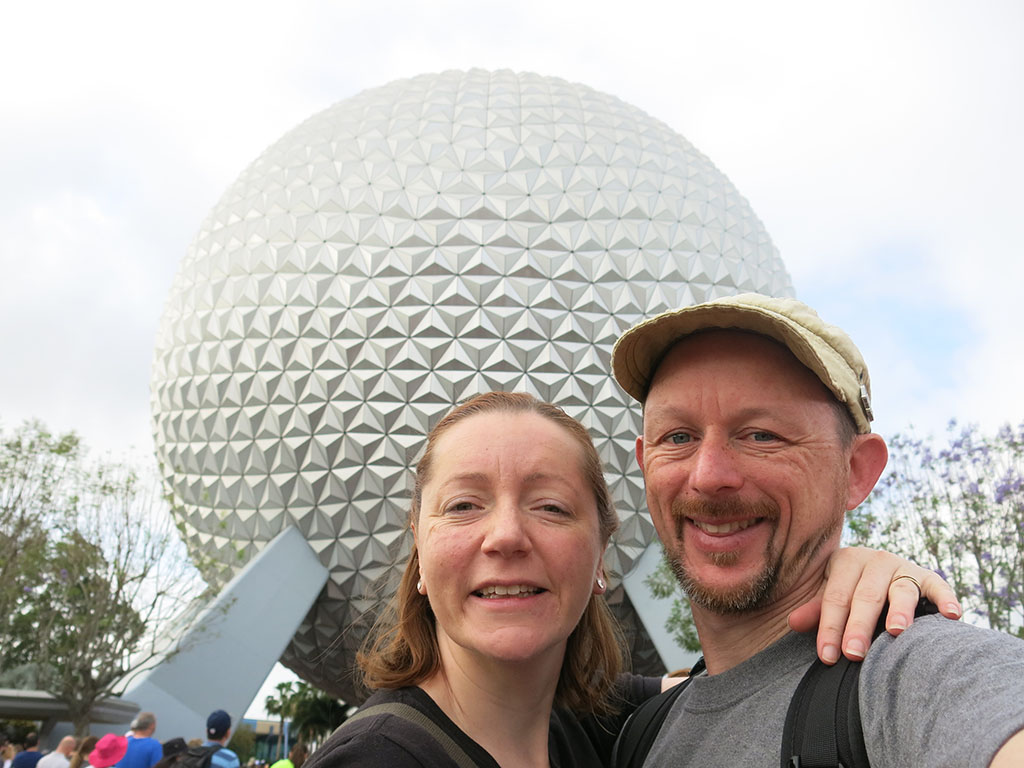 Another day, another Disney park! Today was one I was really looking forward to, Epcot. Why was I looking forward to it? Well, I knew of Epcot and it’s big ball at the entrance, but didn’t know that much about it to be honest. All I knew was that it tried to capture Walt Disney’s view of the future to an extent. I was expecting it to be a little kitschy… and I wasn’t disappointed.

The whole park just felt really… 70’s. And not in a way where they tried to make it feel dated, but just that it had now become quite dated in places. I can’t put my finger on exactly what it is about it, but the front half of the park certainly seems like a product of its time (the back half, the International Showcase, is a bit of a different story). But there was a charm and certainly lots of fun to be had. It was also their Flower Festival, so the entire park was adorned with flower representations of their characters which nice to see in the warm Florida sun. 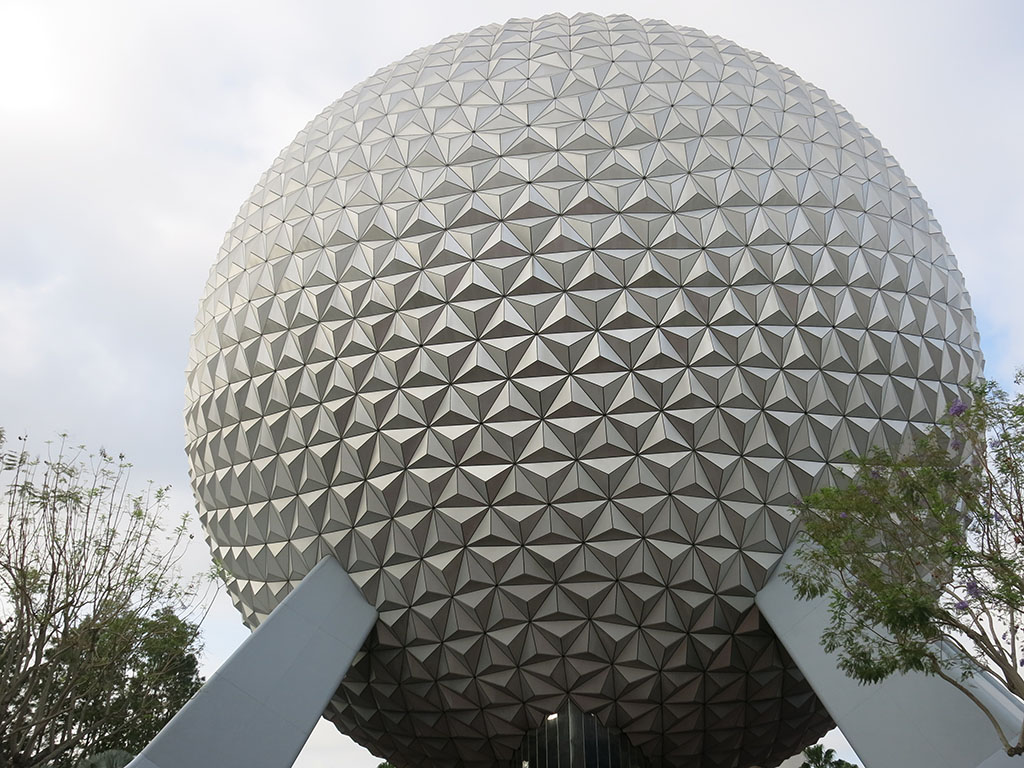 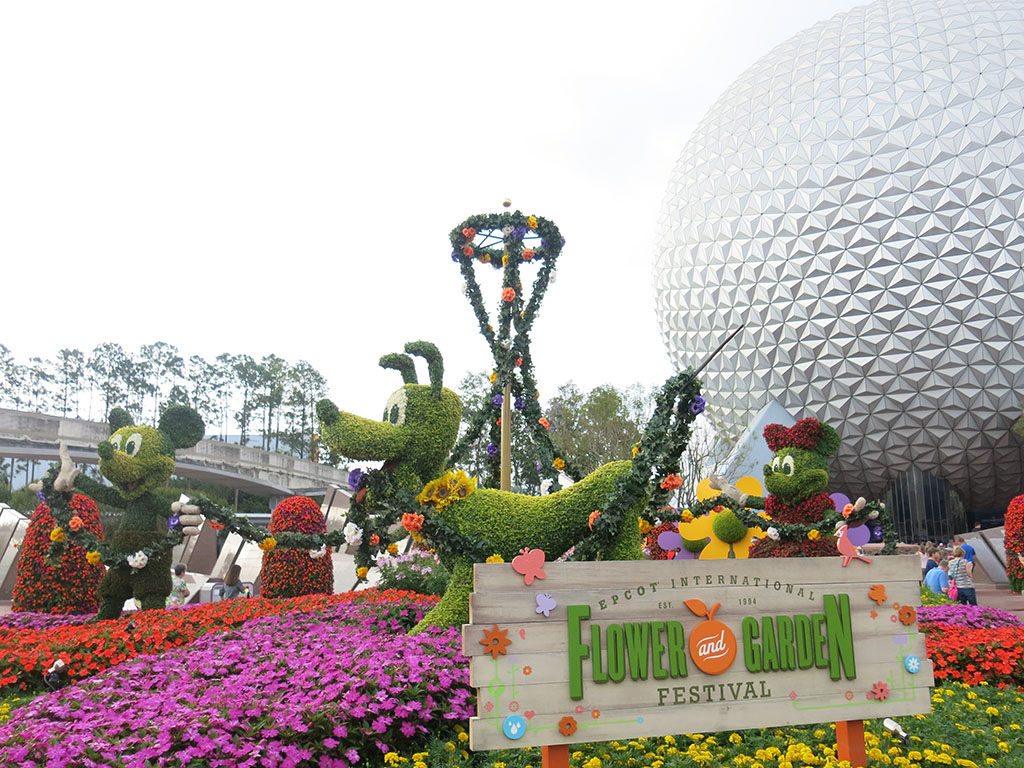 Epcot is especially encapsulated in the famous big ball at the park entrance. I was super keen to finally see it, and it still looks like a 70’s view of the future. Ask me why and I can’t tell you, but to me it is certainly quite iconic as a particular view of the future.

At park open, I raced for Soarin’, aplane ride simulator through different key locations around the world. This is an update of the one in California Adventures, and is a great ride… being suspended in a big glider with dozens of others, and zooming around in front of a big screen that consumes your whole field of view. It is definitely one of the best rides in the Disney parks, and the long queue as I got out was testament to that.

The other main rides in the front half of the park are really showing their age, but in a kinda interesting way. I went on to a ride called Mission: Space, another simulator ride, but this tie for space travel. I had the option to choose normal or intense, and of course chose intense. You take the role a member of a space travel crew and get into a small simulator with only 3 others and then take off. DAMN! The feeling of taking off is nothing like I have ever felt in a ride. It was intense! And awesome! There are also moments of slight free fall feeling, as well as zooming around planets. If only the whole preamble to the ride part didn’t take so long, this would be almost the best ride in Disney. 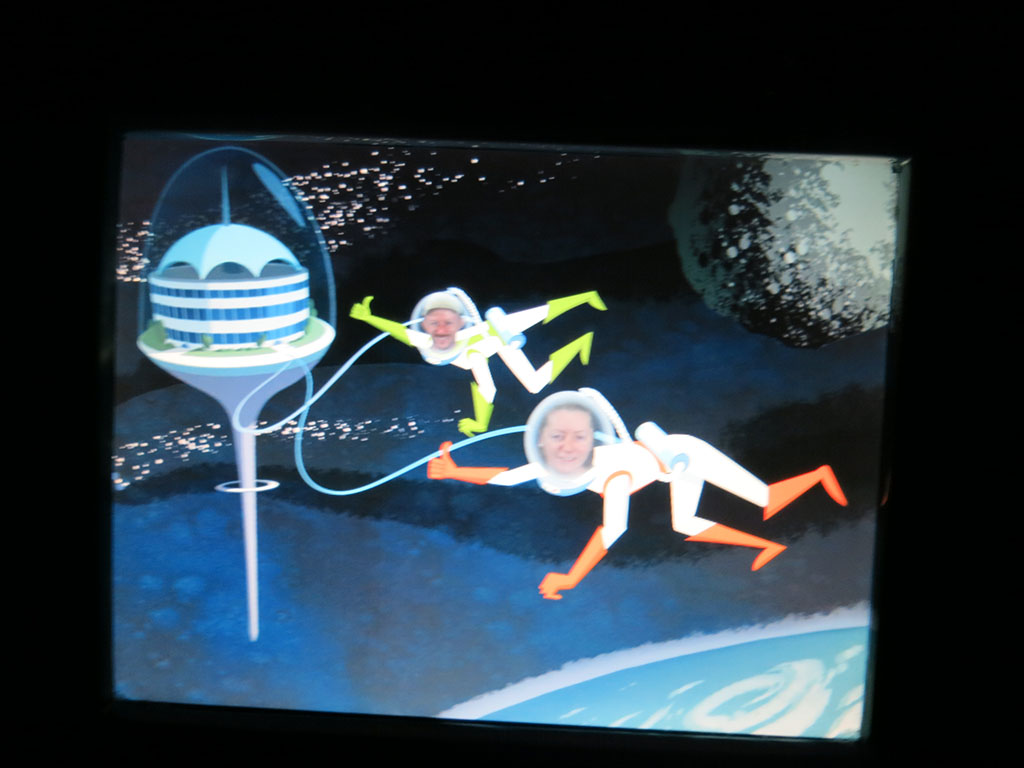 us in the future!

The other space themed ride was one inside the big Epcot ball, Spaceship Earth. Riding in small carriages, you move throughout the ball, glimpsing at what the future may look like. Not sure how accurate it is, but it is certainly fun to see how we may be zooming around with jetpacks in the near future.

Around this time, the wether decided to take a turn. And I mean a TURN. Our bright blue skies became torrential downpour. So much so that much of the park was under half a foot of water. Kate and I made a break for the Nemo ride, and by the end of the dash my shoes were absolutely full of water. Looked like Florida weather had caught us. 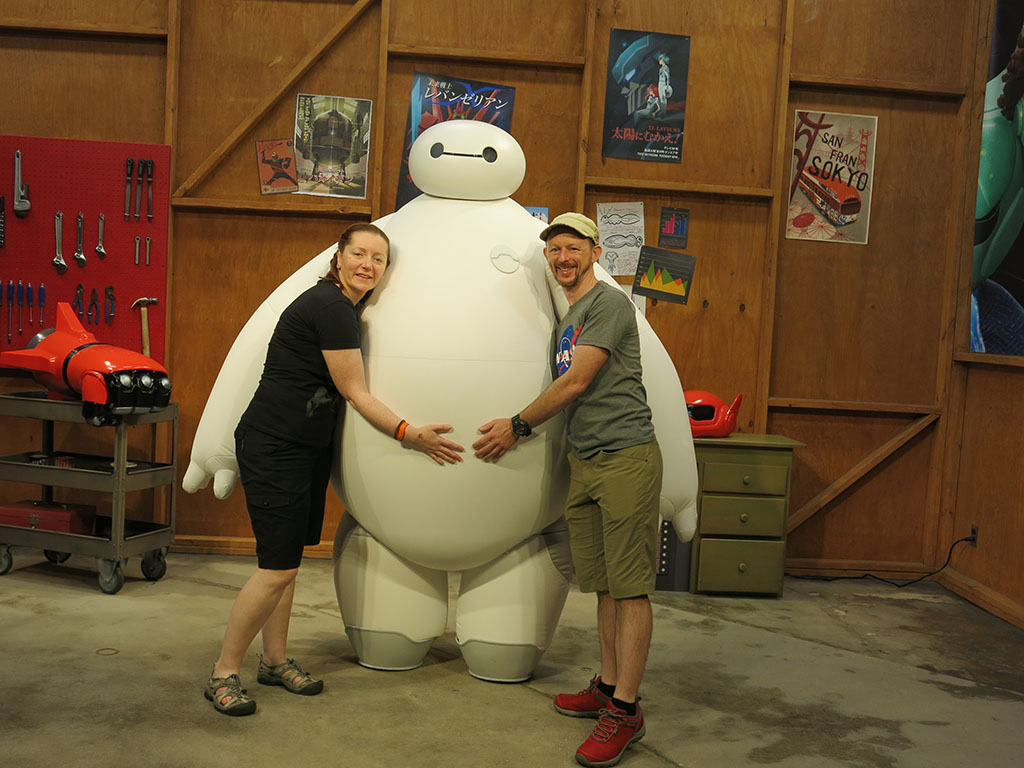 It was still raining when we emerged so took the opportunity to catch up with some more characters, two of my recent favourites, Joy and Sadness. Alas Anger wasn’t about for me to rage with. We also got to meet Baymax and he was indeed as squishy in real life as he seems in Big Hero 6. 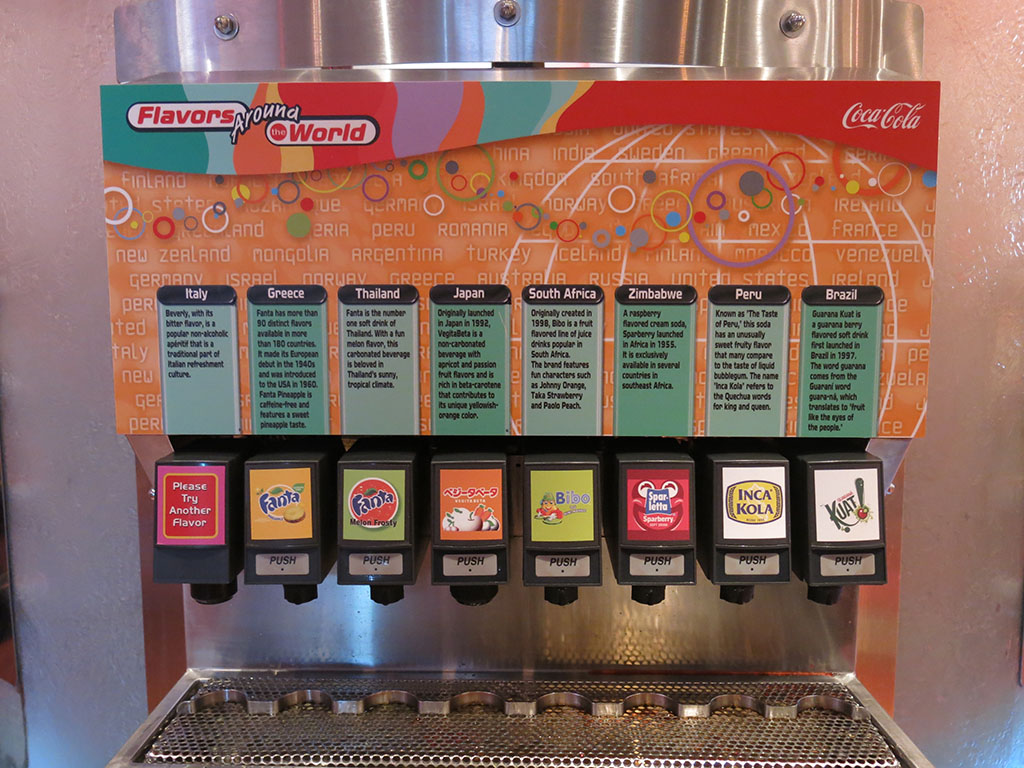 In between bouts of rain, we also found our way into a weird pavilion that simply had a bunch of soda fountains with strange drinks from around the world. Yes! My kind of place! It was funny to watch that people just would not try certain flavours, in particular the Japanese carrot based drink. Of course we had them all and they were all fine. Sadly the Italian soda was not there, one it seemed was a chinotto type drink. Damn! I love me some bitter Italian beverage.

The weather proceeded to have moments of torrential rain until about lunchtime when the sun emerged and we were able to wander more freely around the park. This coincided with moving into the back half of the park, the International Showcase… or as I like to think of it, World Expo ’88. Epcot truly is a weird place. You have all this (now) retro-future vibe at the front half of the park, and in the back half around the lake, it is all about celebrating a random assortment of countries in different ways. All areas had their own architecture in the style of the country they were representing, and then there would be different things to do. Not rides as such, but often 360 degree films about the countries, or maybe a slow boat ride through the country. The there was the food and (quite amazing to me) the booze you could have at each stop. We started heading counter-clockwise, starting with Canada for some lunch. 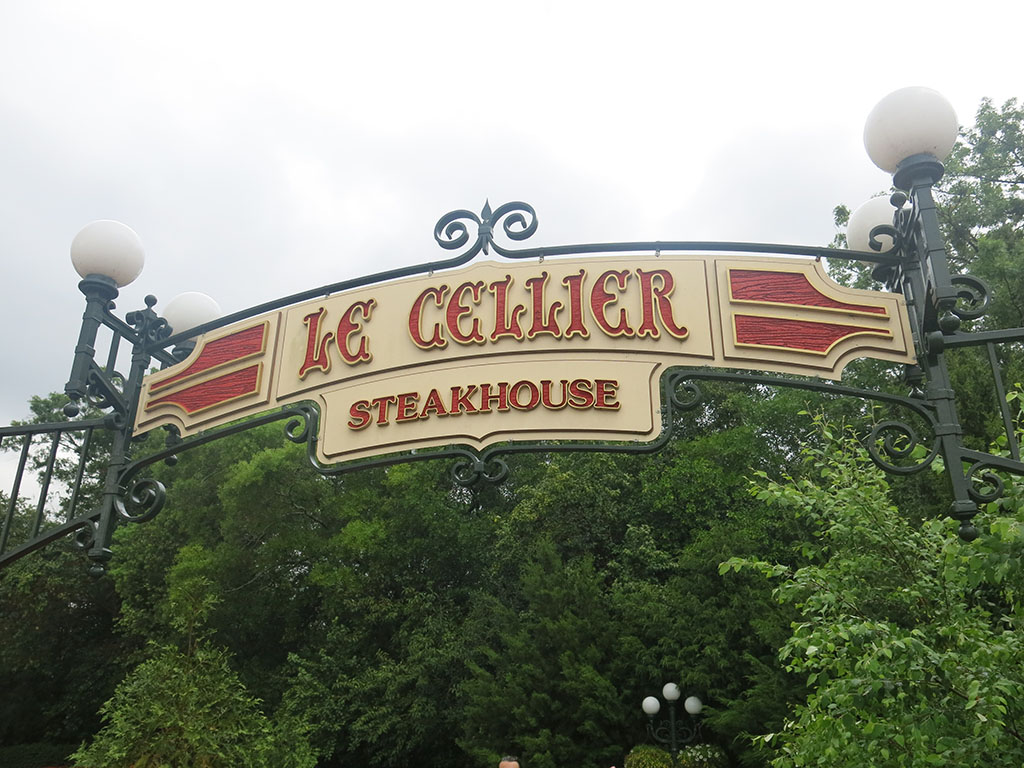 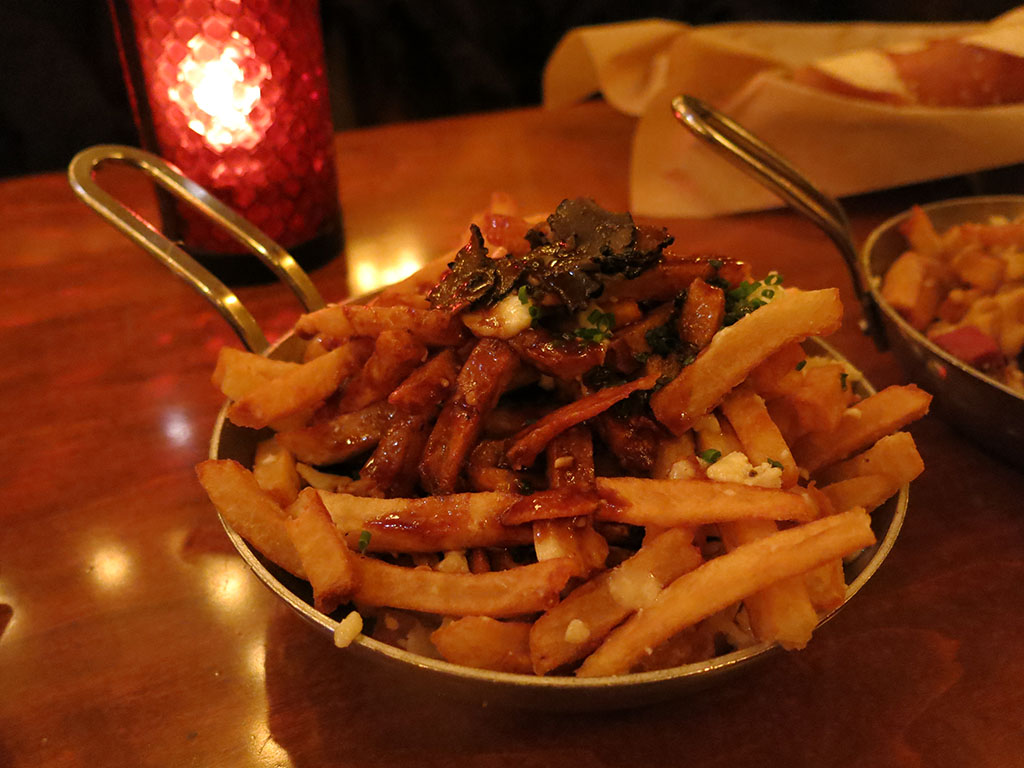 We planned to visit Canada for lunch, as apparently it was home of a quite fantastic poutine, a Canadian speciality. So in we went to Le Cellier and strapped in. Of course we wanted to eat everything, and even our choices of a cheese soup each and a poutine each ended up being way too much. But it was so delicious! The soup was great, but the poutine was awesome. I went with a bacon based poutine (of course) while Kate went for the Le Cellier Signature Poutine… the chips with Canadian cheddar cheese, black truffle and a red wine reduction. I have to say Kate’s was the winner. Super rich but super delicious. We had plans for dessert, however that didn’t eventuate when we were so full after that. 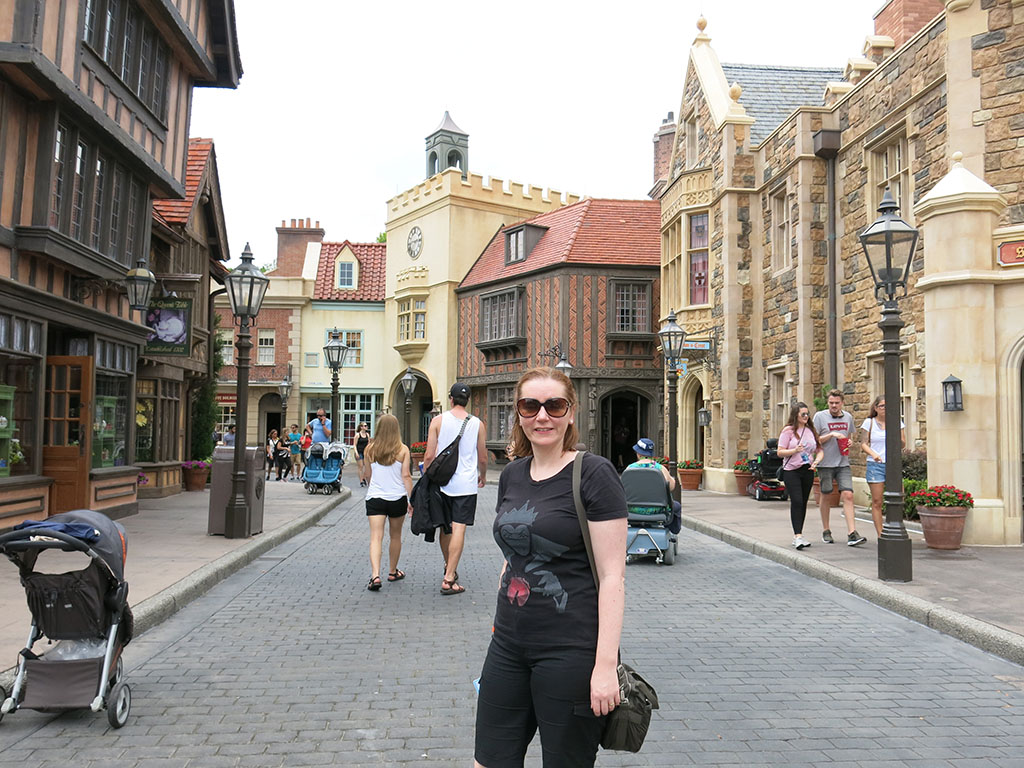 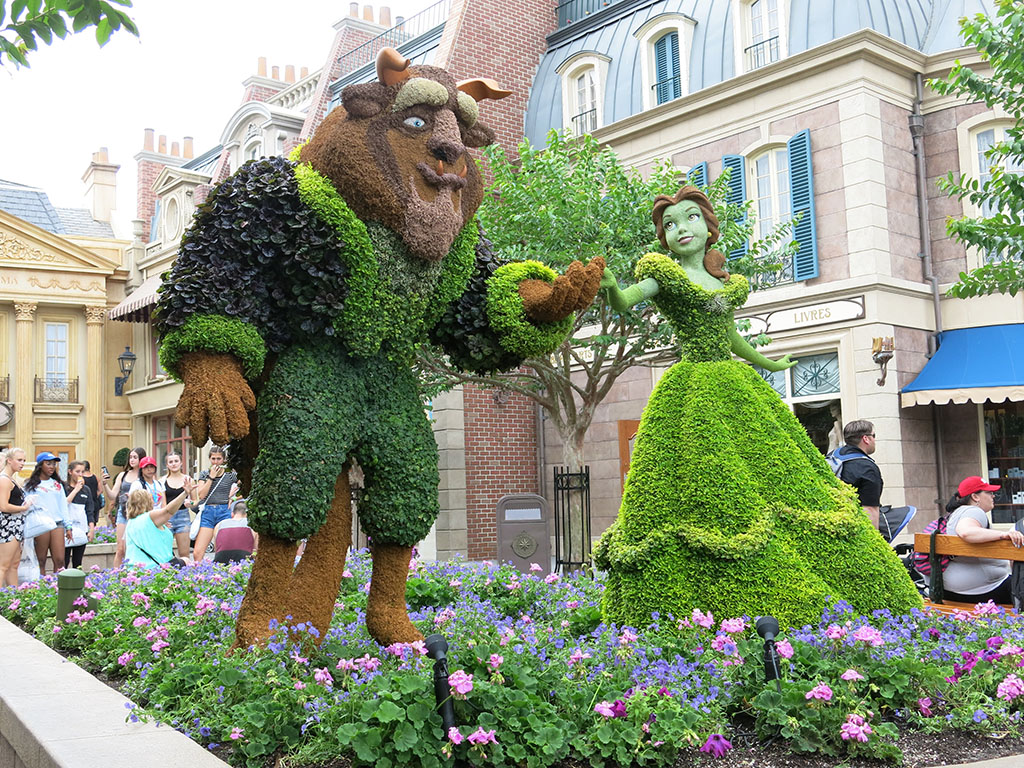 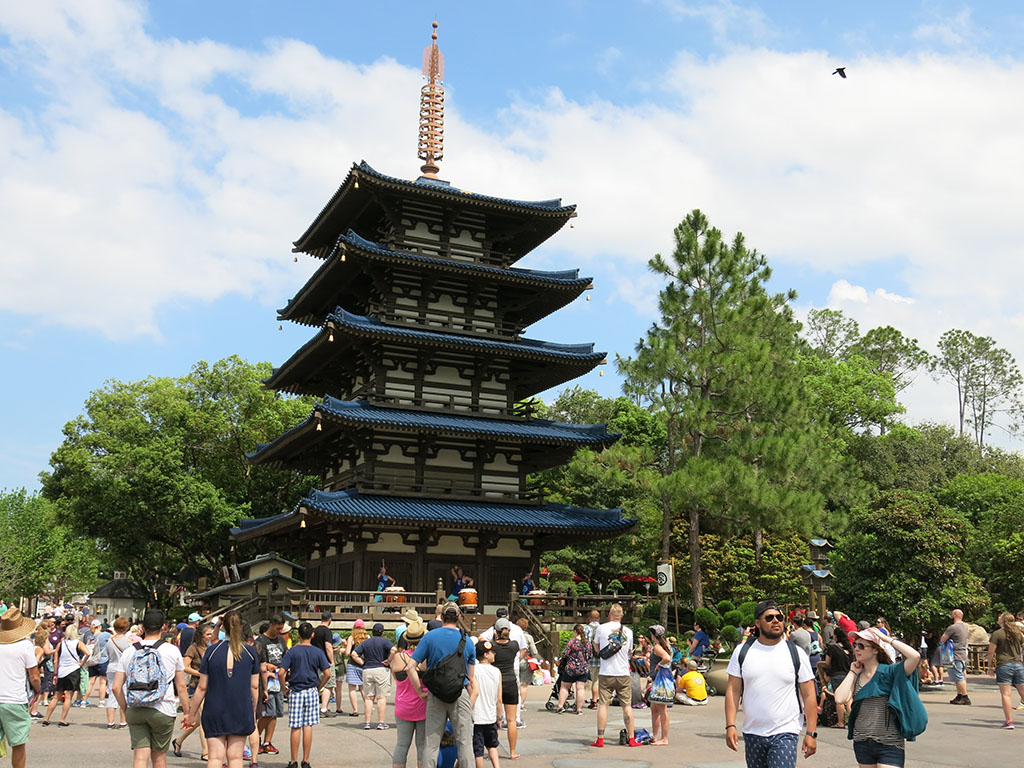 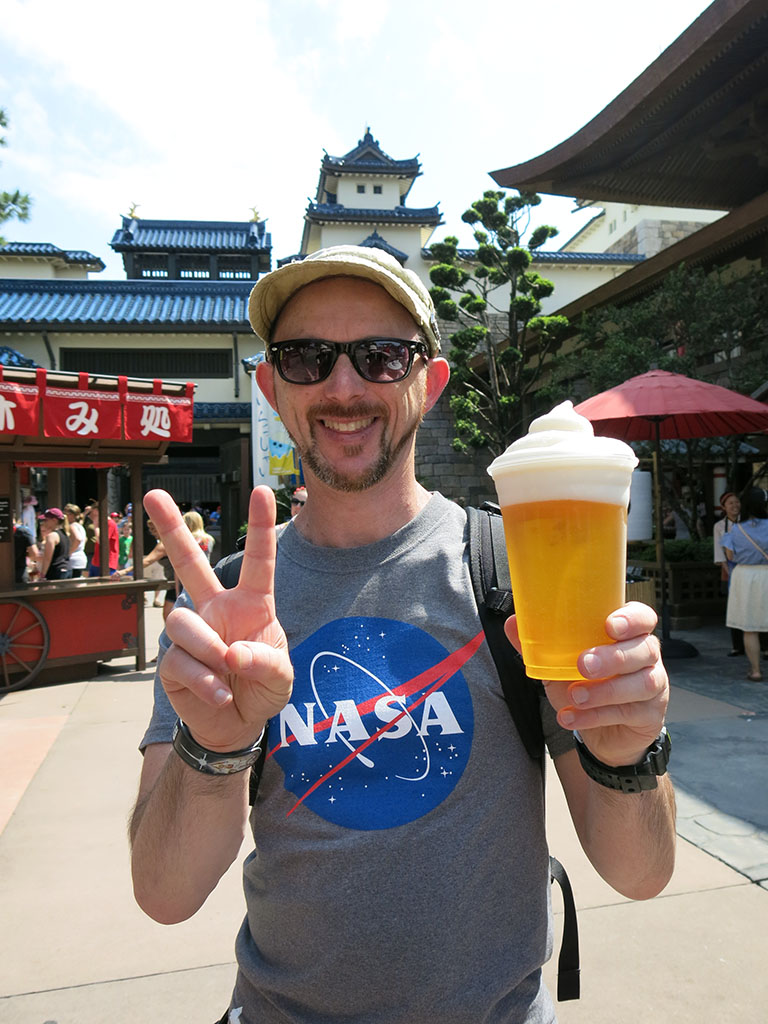 So with full bellies, it was off to explore more countries. We went from Canada to the UK to France and to Japan, meeting characters and sampling food and drink on the way. Japan gets a special mention for actually feeling quite Japanese actually. Of course the main beverage oddity I would come across was there… a Kirin Beer Float. Yep. It was basically Kirin beer with frozen beer on top. While it sounded OK and looked great the frozen beer was not necessarily the greatest thing I have ever had, even on a warm day. Oh well, live and learn. 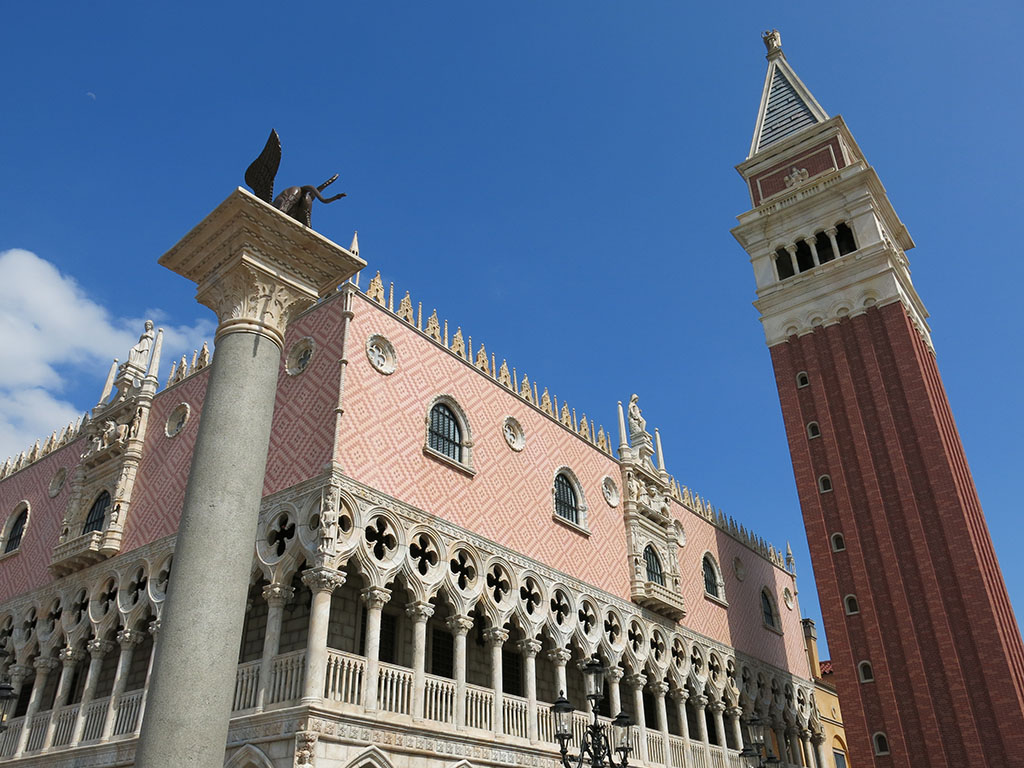 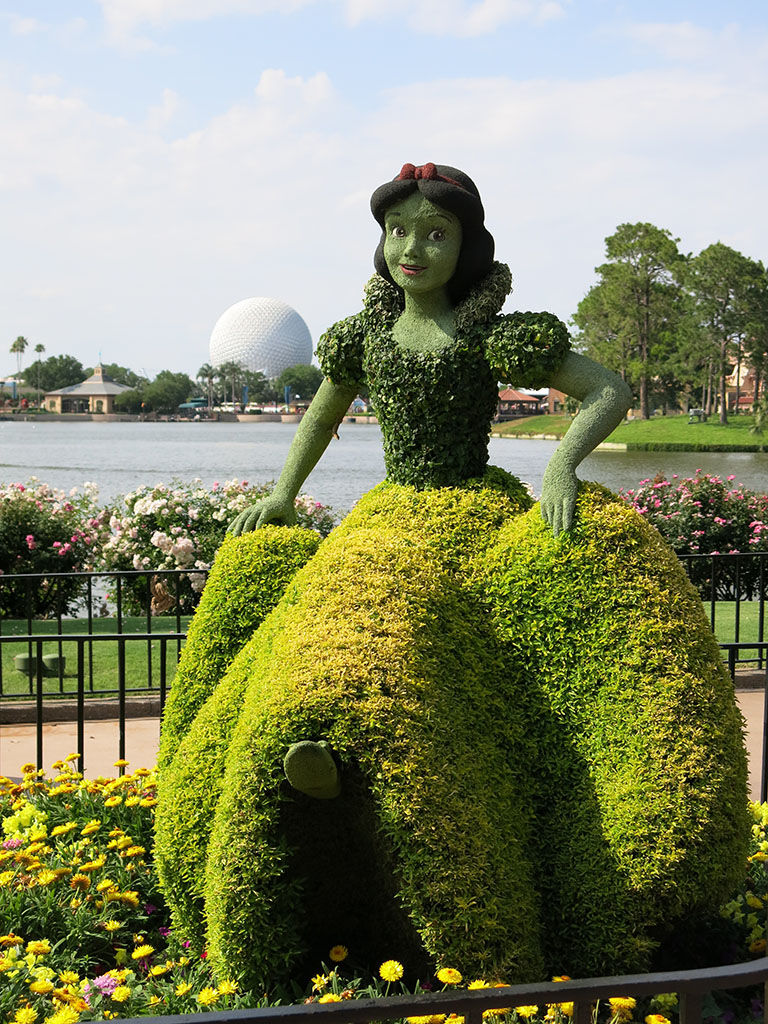 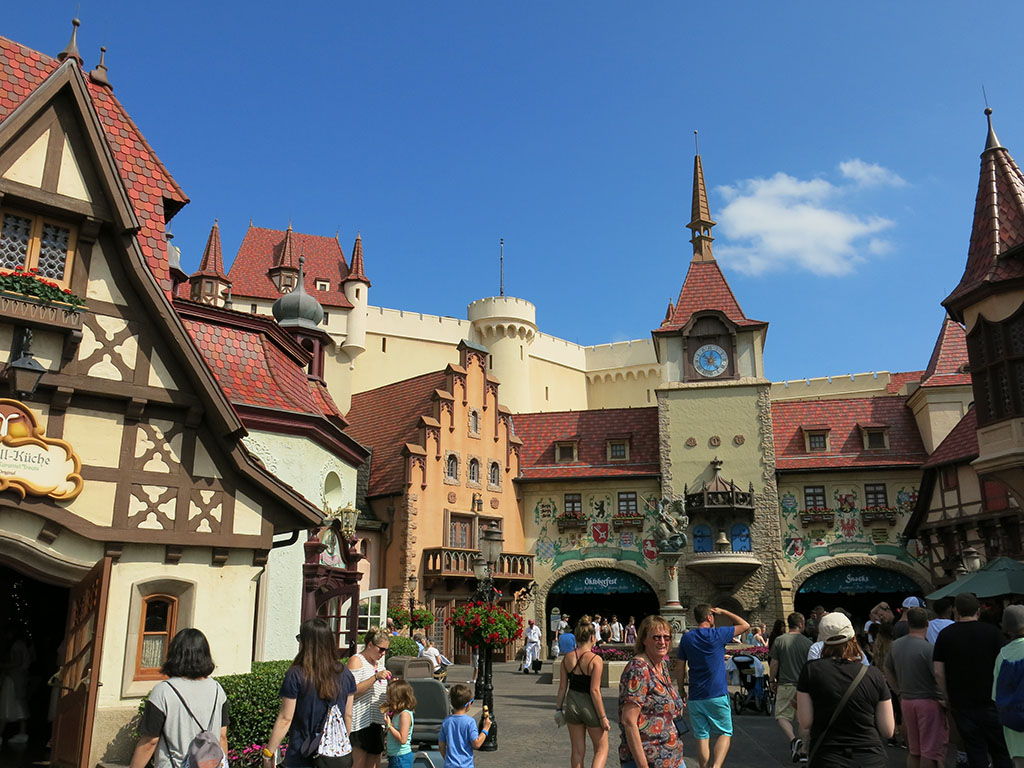 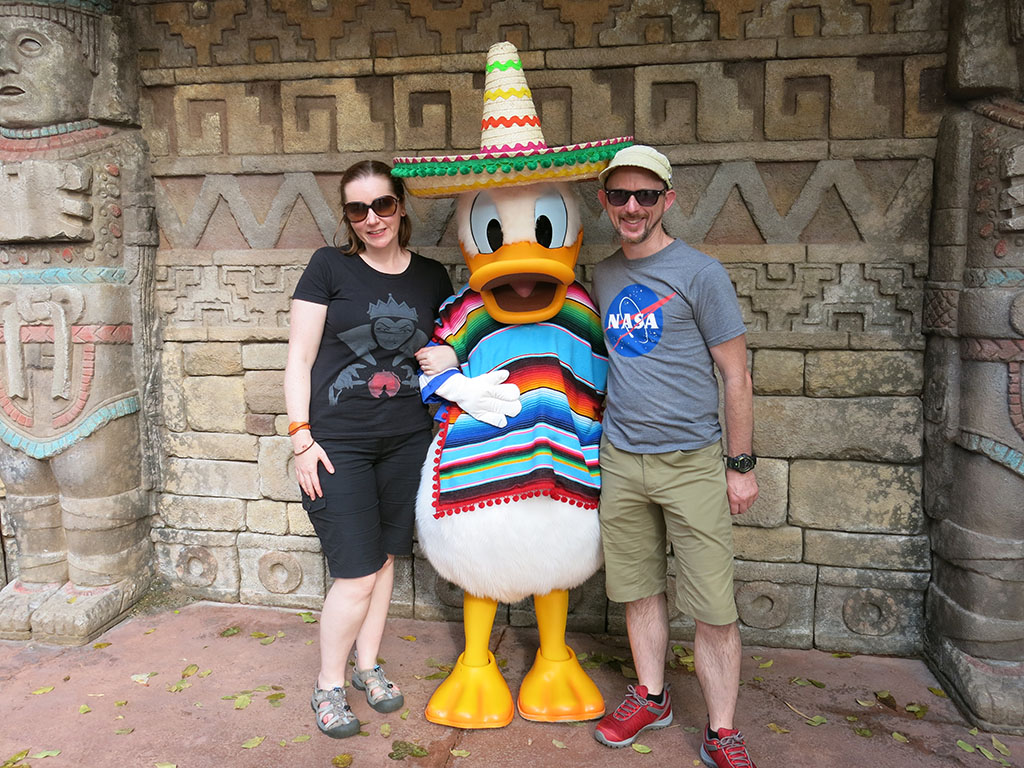 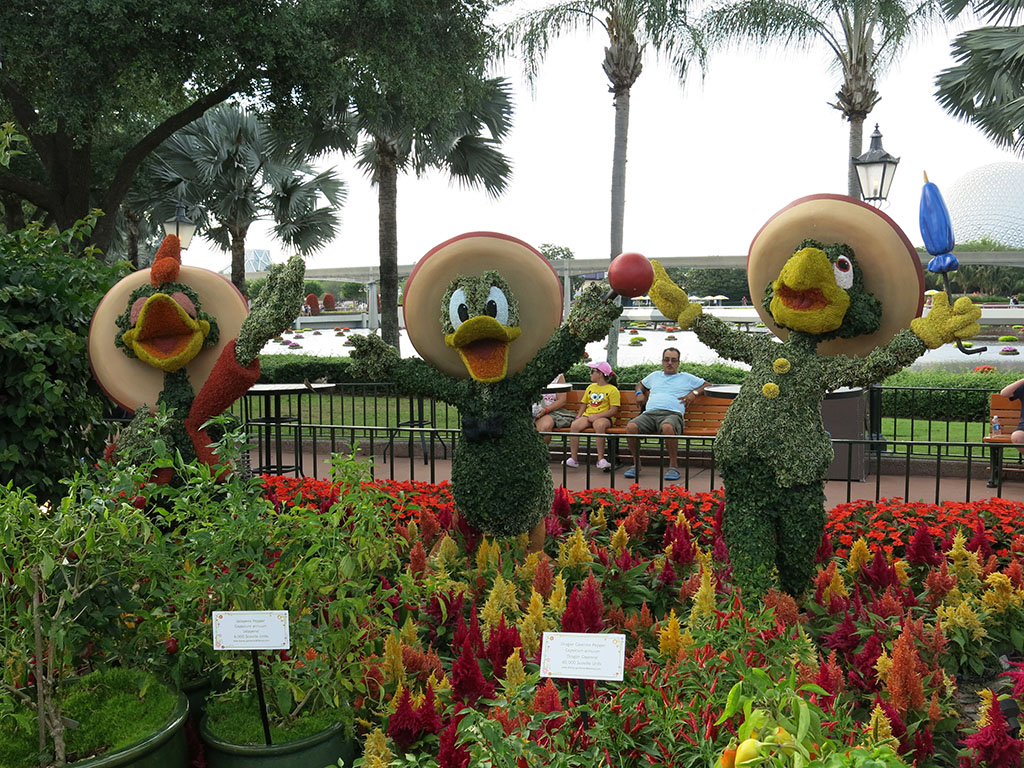 We kept moving around the lake… Germany to Italy to a generic African country to Norway to China and to Mexico. While in Mexico we went on the 3 Caballeros ride, and met a Mexican themed Donald Duck as you do. And while in Mexico we took the opportunity to get stuck into some empanadas. Mmmm.

With that we had made our way around all the countries. We had plans to see the light show on the lake, so decided to fill in some time by visiting a ride dedicated to Figment, the Epcot imagination dragon. Kate seemed to have a fascination with Figment. Me… I just thought it was all a bit odd. But keeping with the spirit of Epcot I guess! 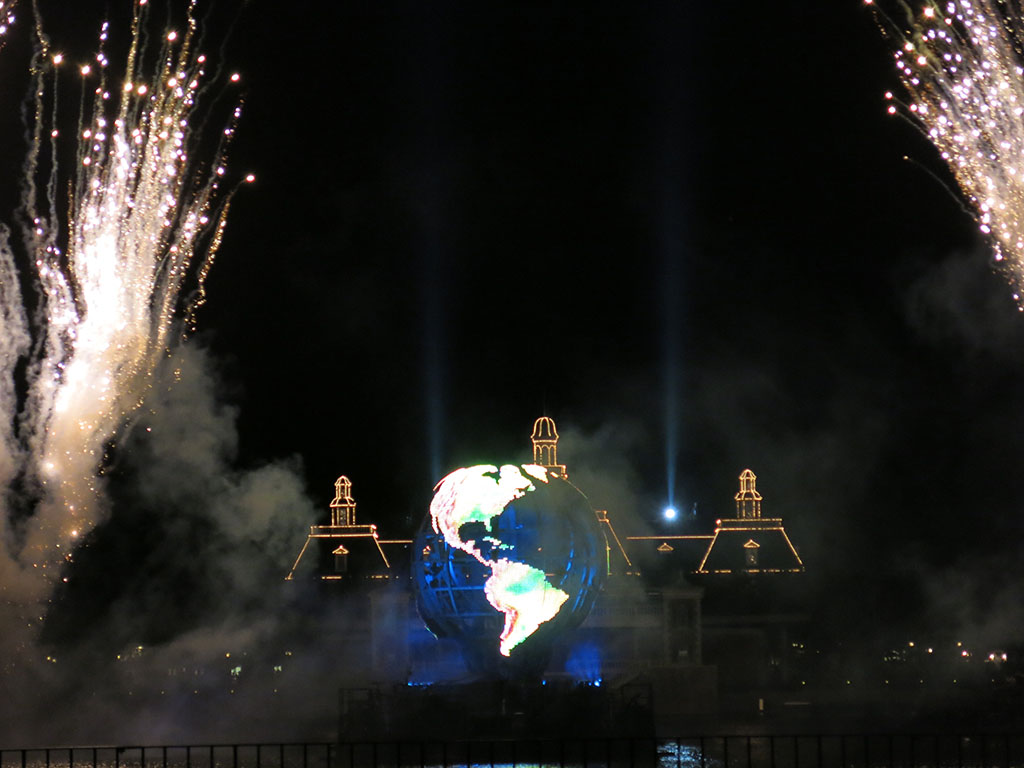 The sun had gone down and it was time to head back to the lake to watch the Illuminations show. We sorted fast passes so went to our spot and had a great view of the show. This fast pass thing was working very well for us.

We still had an hour or two before park close, so we decided to head back to Norway and try and give the most popular things at Epcot a go, meeting Anna and Elsa, and jumping on the relatively new Frozen Ever After ride. We got to Norway and basically walked in to meet the two Frozen gals. Frozen Ever After was a different story. Only 30 mins the sign said. Yay! However when in line we realised that was not the case. Close to an hour later and we were not really getting anywhere. It seemed the ride was suffer a fair degree of technical difficulties. I guess we can say we went on “Frozen Ever After – The Line Ride”.

So we decided to cut our losses and legged it to the USA area to catch their “America, F’ Yeah” show. Well, it was a historical animatronics show but did end up being very “USA USA USA”. It was fine, and it was quite funny to be in an auditorium that probably could hold a thousand people with like 6 people in there. When we were done it was 11pm and time to make our way back to the front of the park and head back. Another midnight night, and another early morning coming.