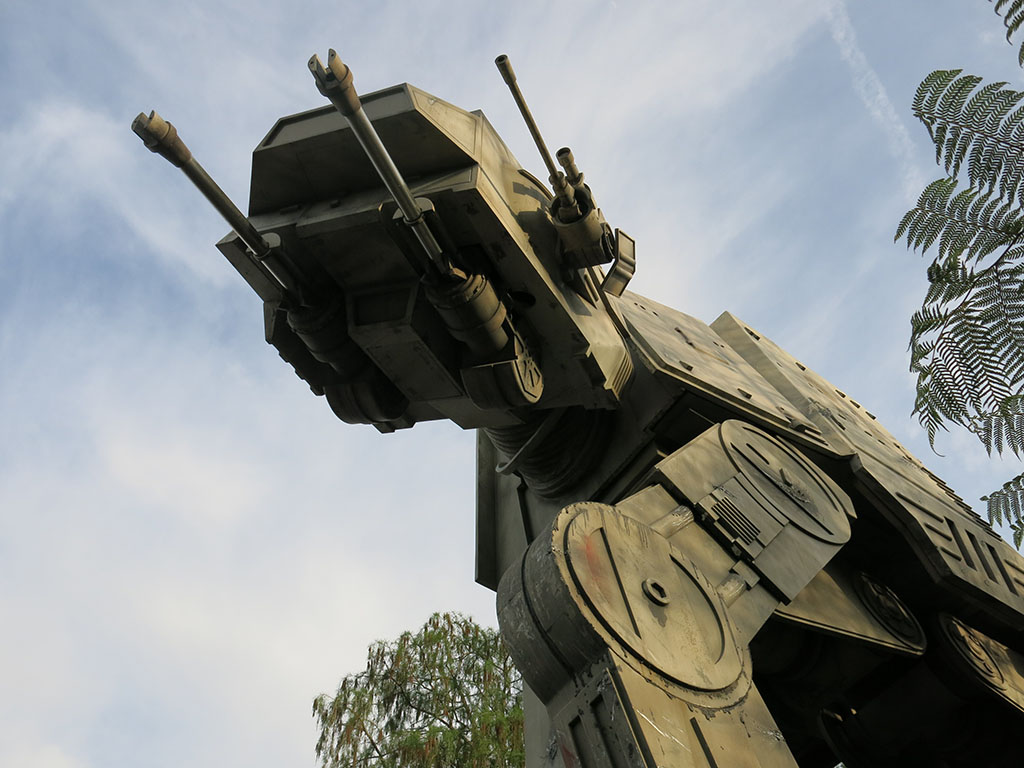 After a brief sojourn, it was back to Disney! Today was Hollywood Studios, and what we were dubbing my official Star Wars birthday celebrations. At Disney you can just ask for a badge indicating it is your birthday, so I started the day with a birthday badge adorned, ready for a big day. 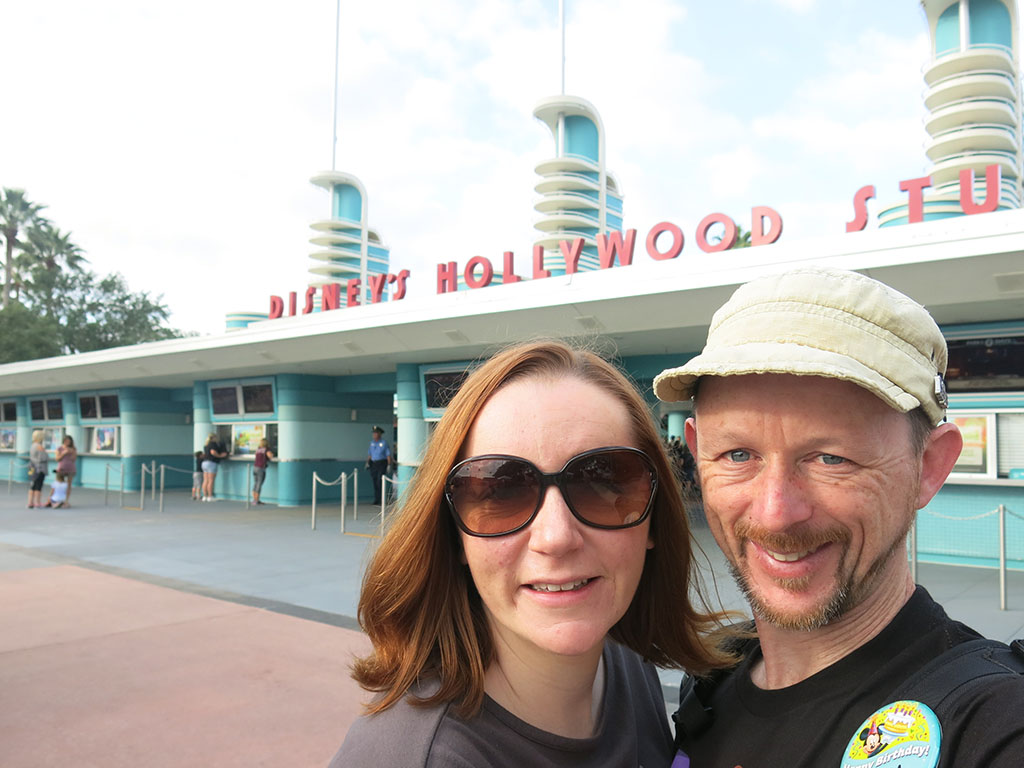 This park is the “Hollywood” Disney park as the name suggests… focusing mostly on other side properties like Pixar and especially Star Wars. So I was going to be in my element! Rather than give you the blow by blow details of what did, I will just point out the highlights for you all… 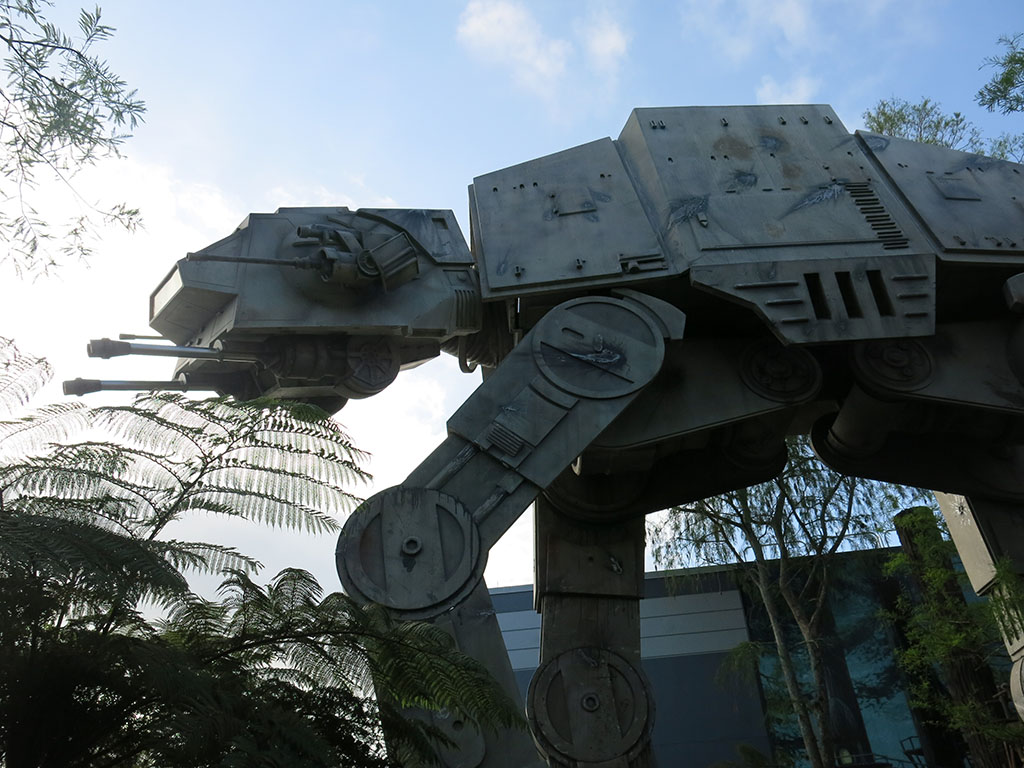 We obviously had a whole day of more rides and meeting characters. As I alluded to there was a distinct Star Wars flavour to much of it. I started with Star Tours, a ride that has been in Disneyland for quite a while, but it has had a recent revamp,with much of the content updated. A simulator type ride, its key aspect now is that you don’t know what experience you will get before riding. I have heard there is dozens of different experiences you can have, all about what content they choose and how they put it together. The basic idea is you are in a shuttle escaping the Empire, but how you do that changes. My first flight put me in the middle of a Pod Race (fun even though it was Phantom Menace related), but after that I had a Hoth experience which was what I was hoping for. So ace to be speeding through the snow and tripping up AT-ATs. 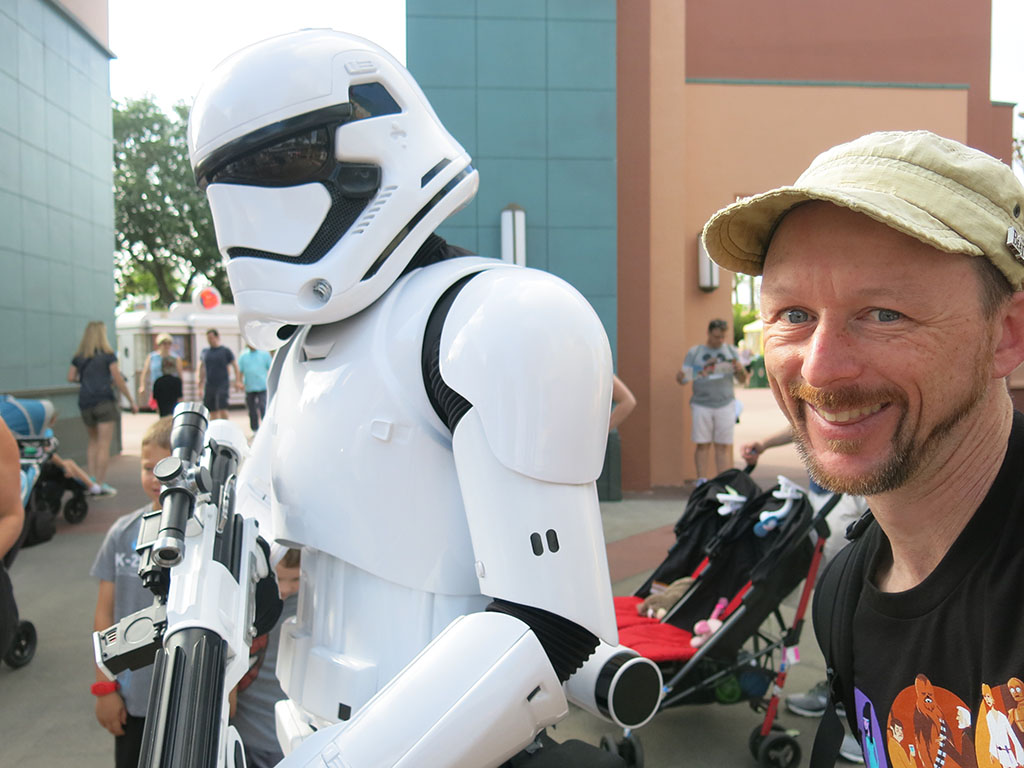 We also took the opportunity to met the handful of Star Wars characters there, which was an interesting assortment. First Order Stormtroopers continually wander the park, and interact in hilarious ways. They won’t stop for photos, and any attempt to interact will be met in a variety of different ways, depending if they see you as a rebel or part of the First Order. A sneaky photobomb was all I could try and do which was fun. 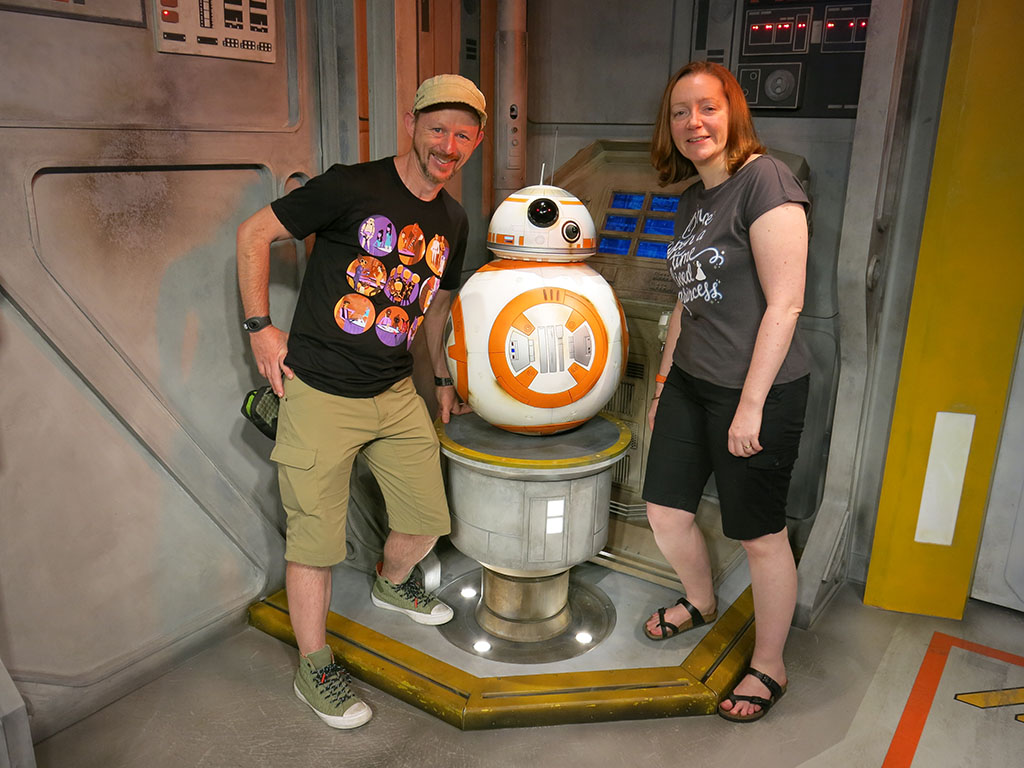 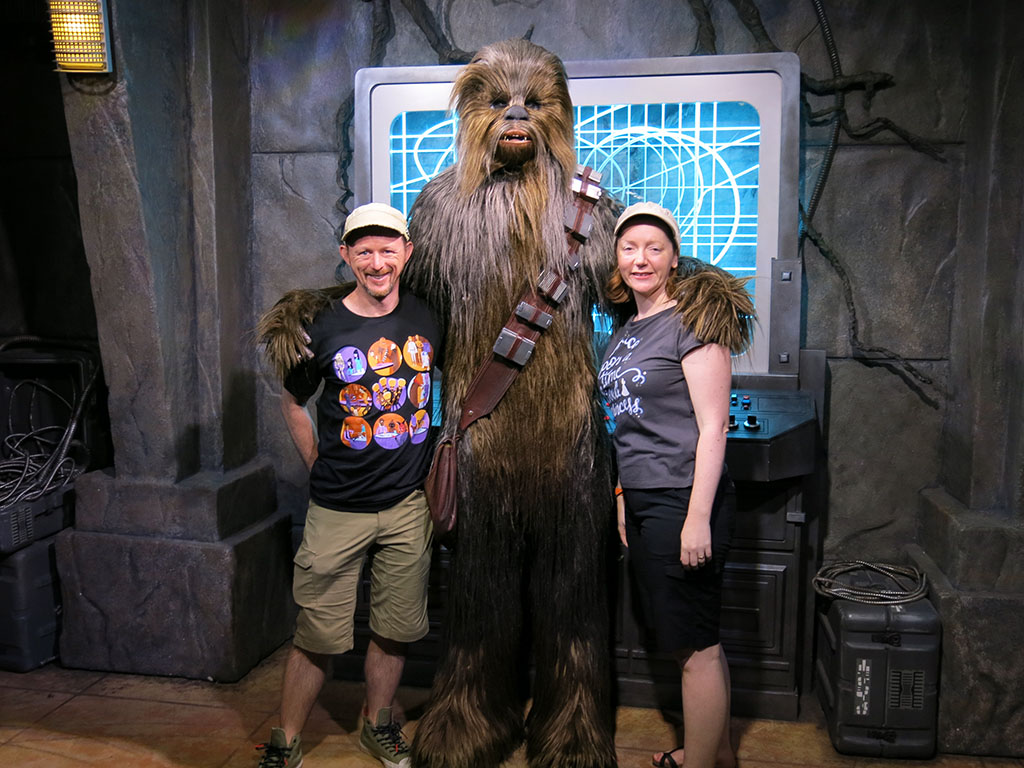 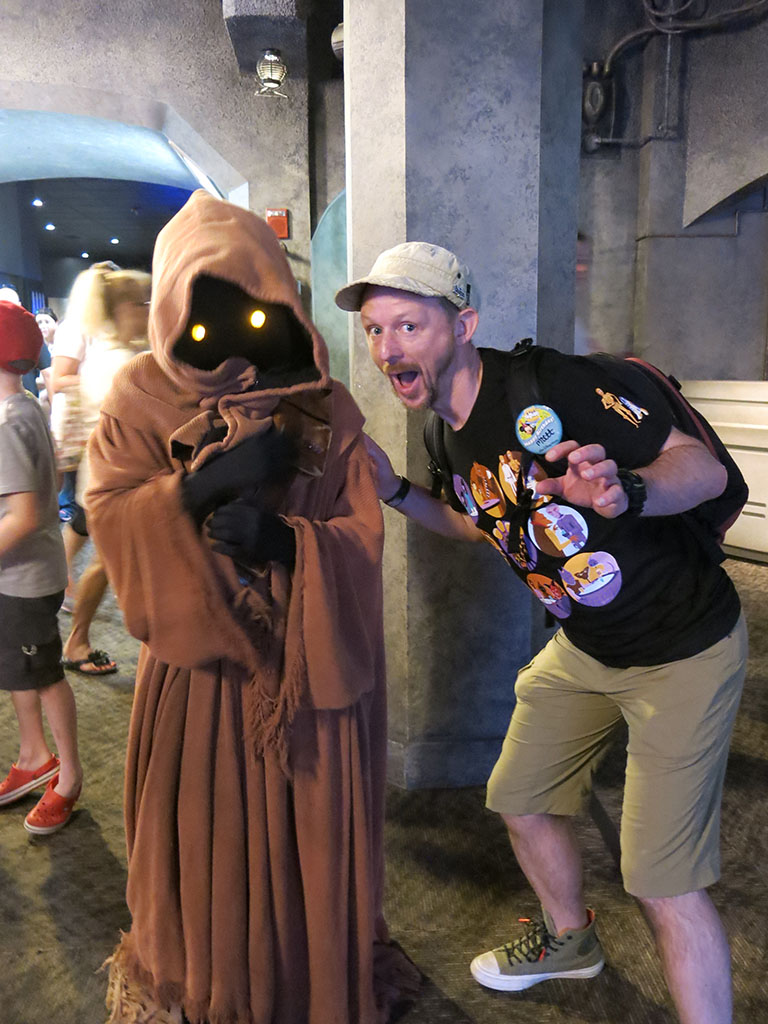 The characters that were formally there to meet were mostly Force Awakens ones, with BB-8, Kylo Ren, and Chewie there. BB-8 was a bit disappointing as he just sat there on a podium, but both Kylo and Chewie played their parts well. Kylo was a jerk, just like in the film 🙂 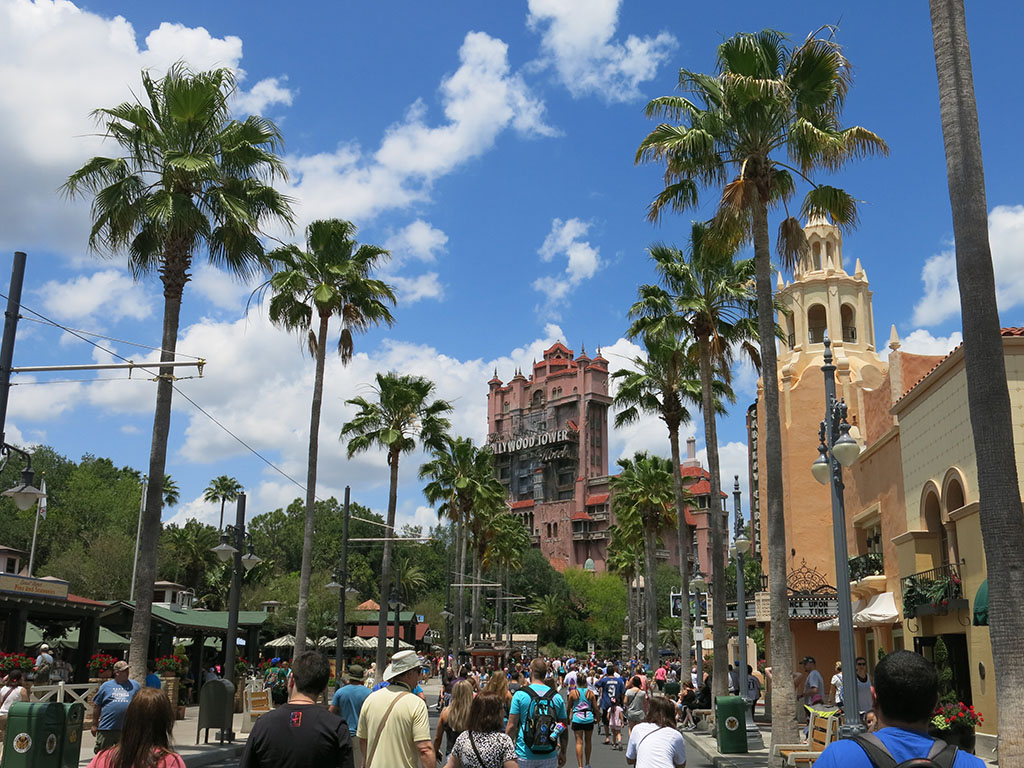 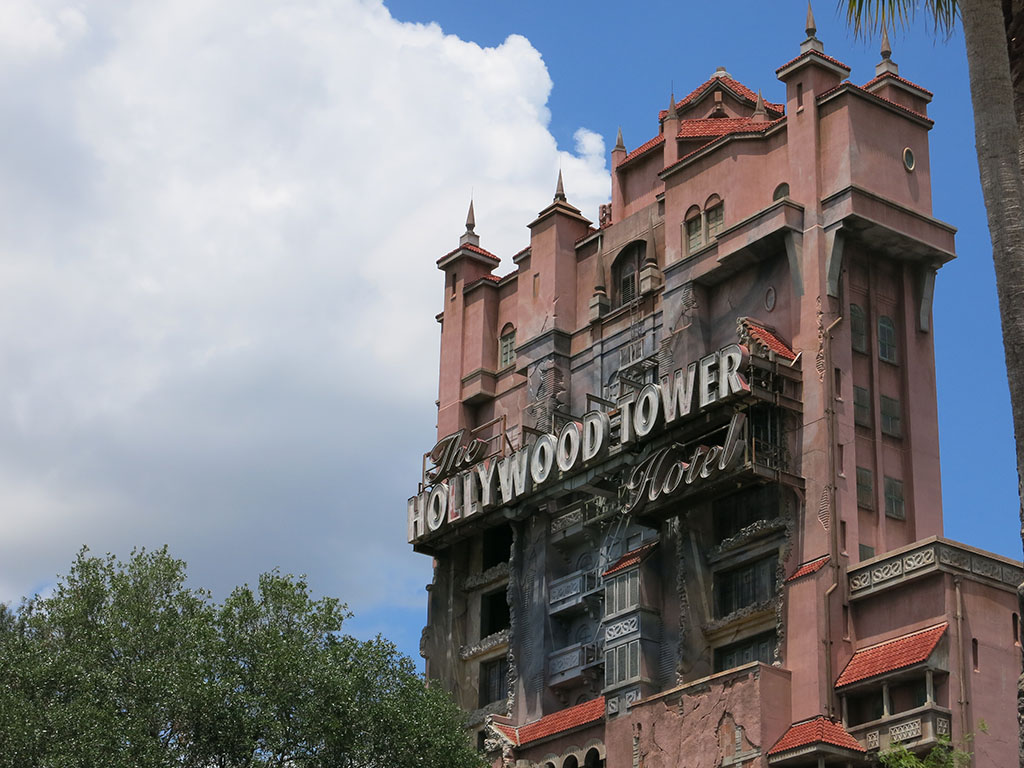 Hollywood Studios is the park where I can get some of my more thrilling rides on, so I relished that opportunity. The Tower of Terror, a staple at a number of other Disney parks, got a couple of rides, as did a big fave of Kate and mine, Toy Story Mania. We first played that in California, and it was just the same here and super fun as always. 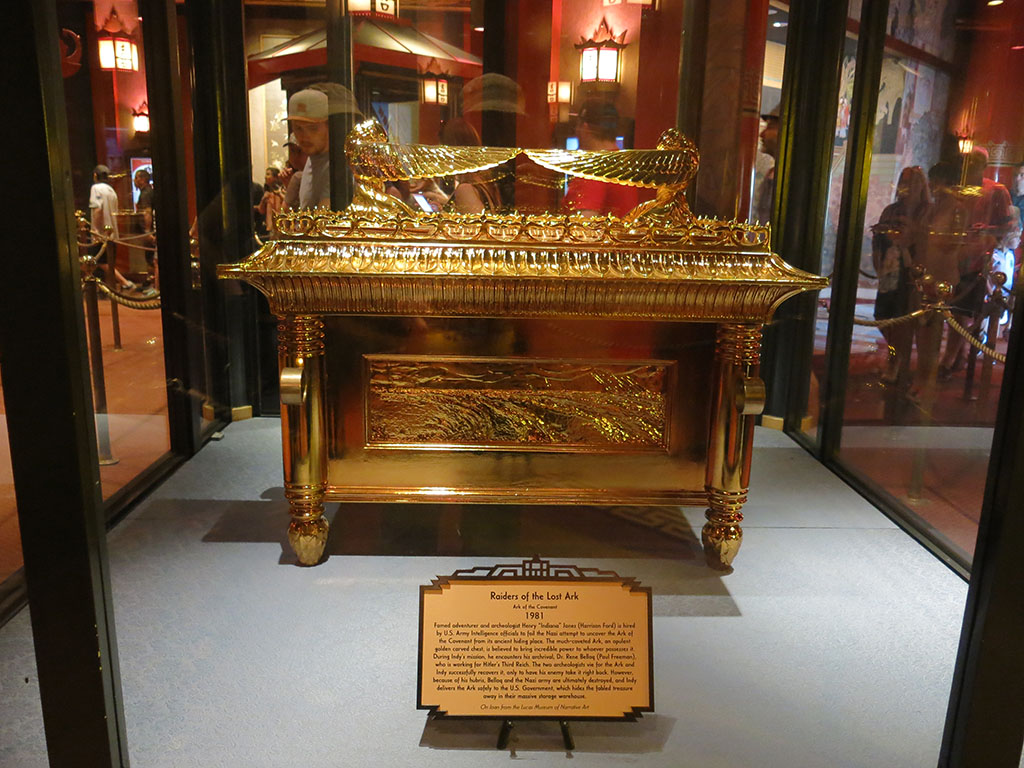 We managed to fit in most the other attractions in the park too, like the Indiana Jones Stunt show, and the Great Movie Ride, all pretty fun. 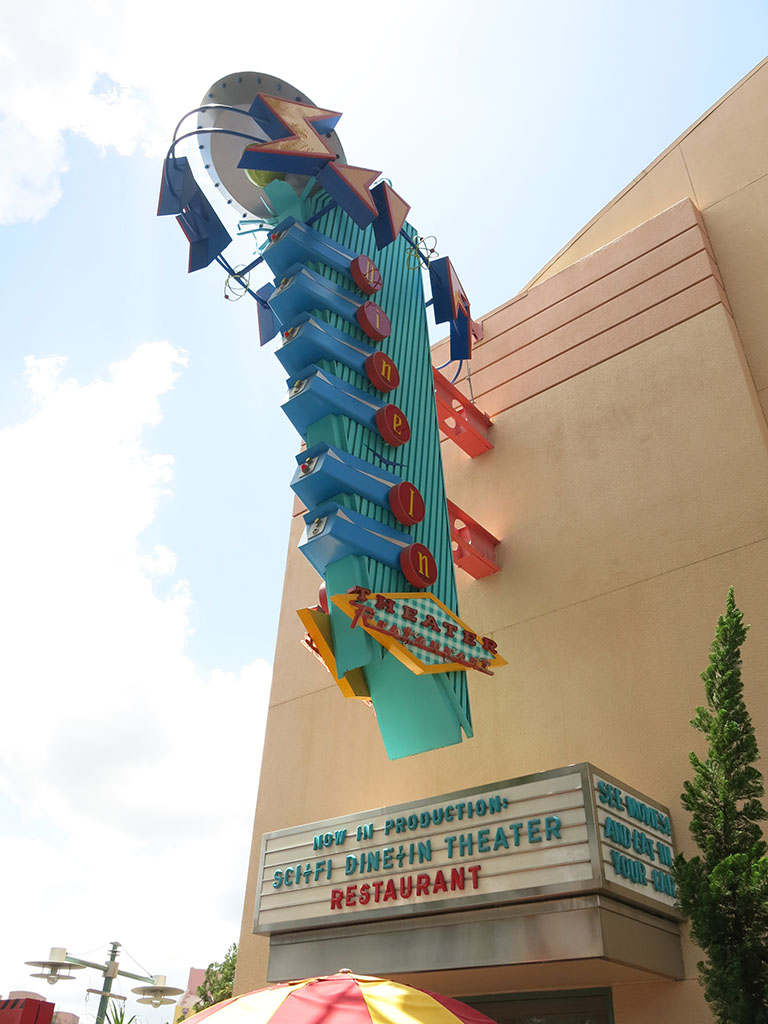 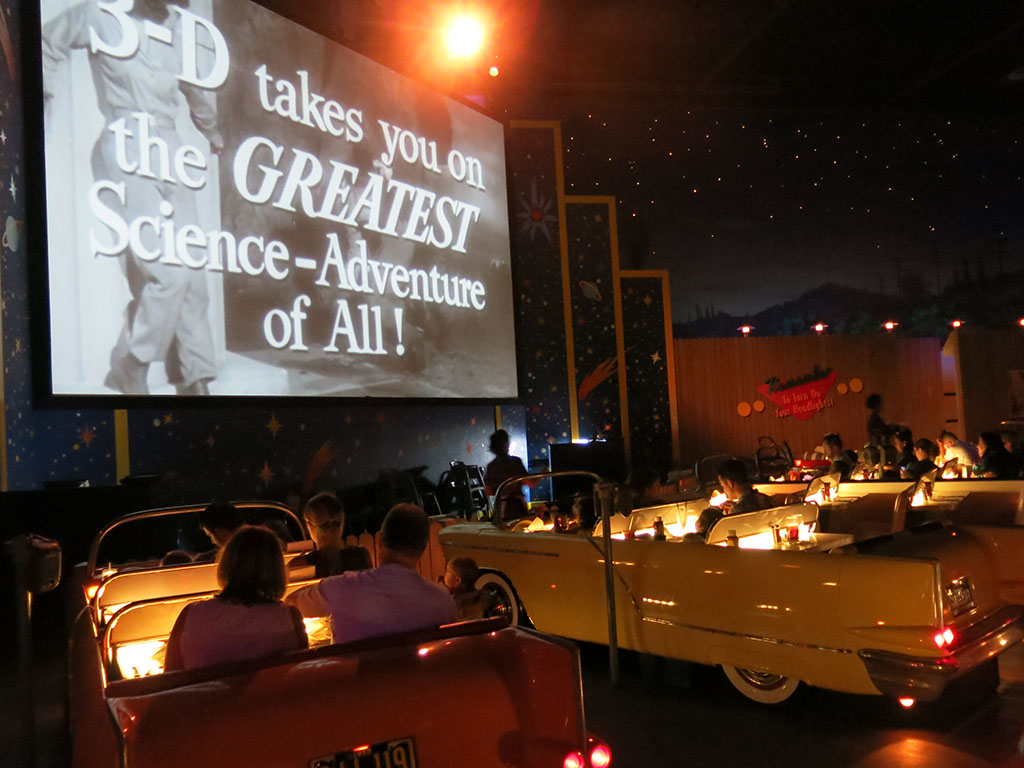 There were two other main super fun things we did during this visit. First up was lunch, booked into the Sci-Fi Diner. This was a kitschy experience of sitting in old cars while watching 50’s drive-in content. It was totally cheesy but super fun, sitting there eating burgers, drinking beers, and watching old cartoons. Everyone gets right into it, making it a great way to take a break for lunch.

The day ended with one of the main things Kate organised, which was another dessert party. More exciting for me with this one was that it was Star Wars themed, with not only desserts but endless cocktails too! After getting our fill of those, including the Vader Peanut Butter cupcakes, the dessert party also gave us a primo spot for the fireworks show, which was the Star Wars Galactic Spectacular. Woo! 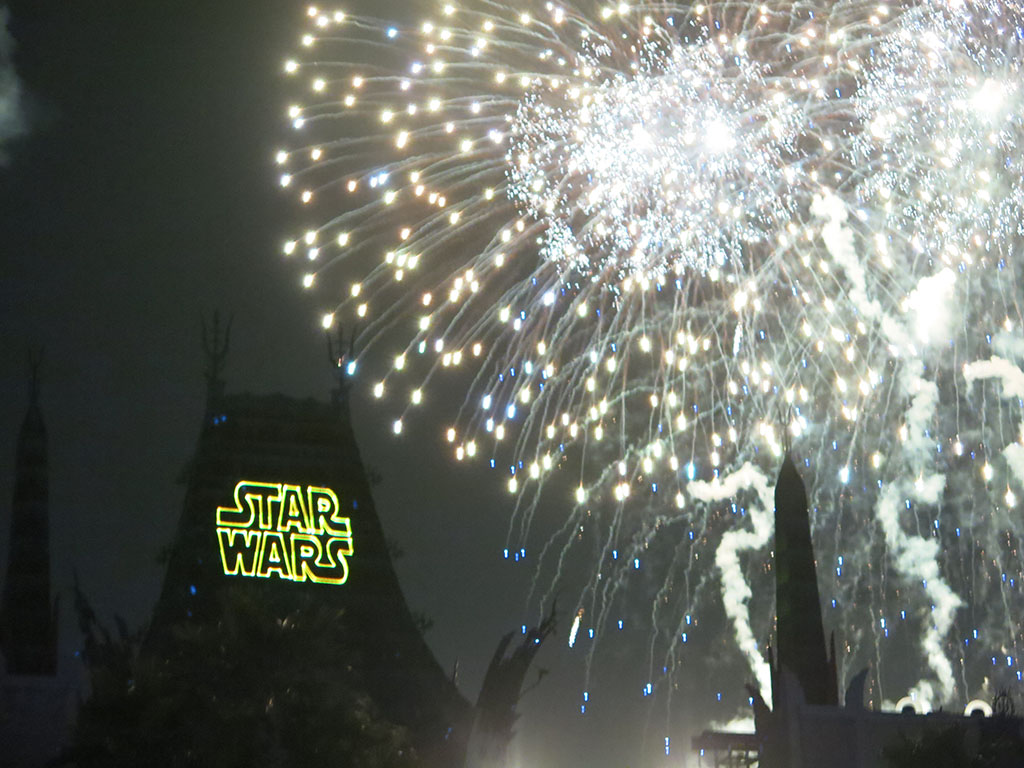 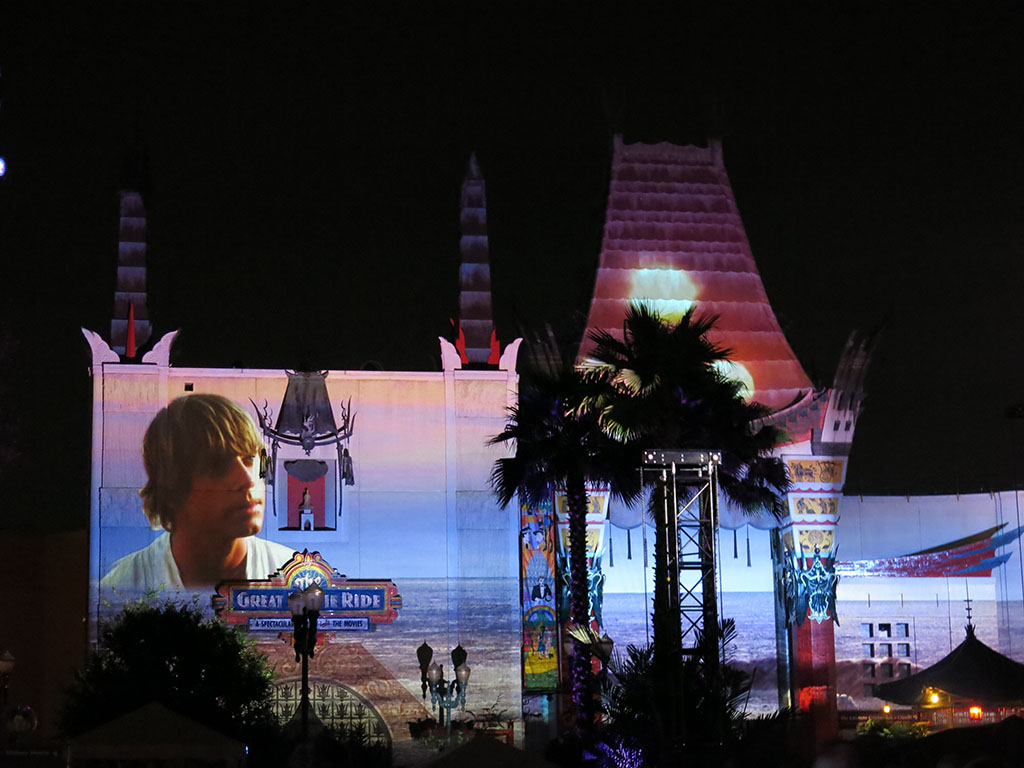 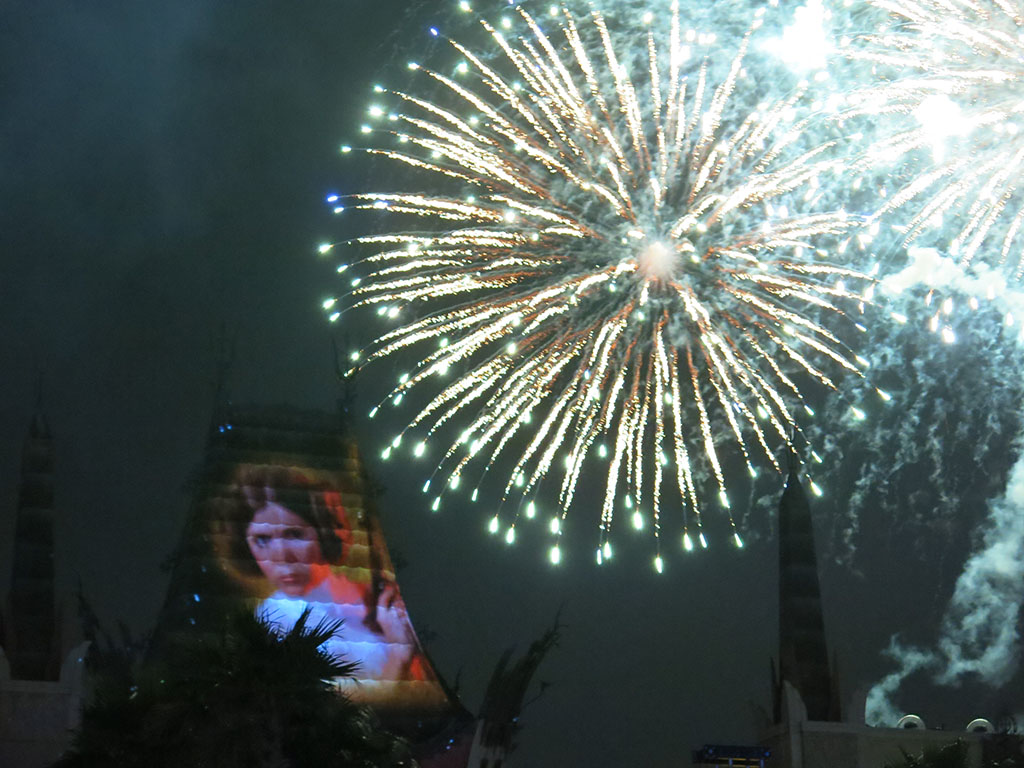 my kind of princess

Of course this was my kind of fireworks show. With projections onto the main theatre at the centre of the park, this was a celebration of all things Star Wars, mostly the original trilogy. The projections were great and everybody was loving celebrating Star Wars? And who wouldn’t? Especially on my birthday celebration day.