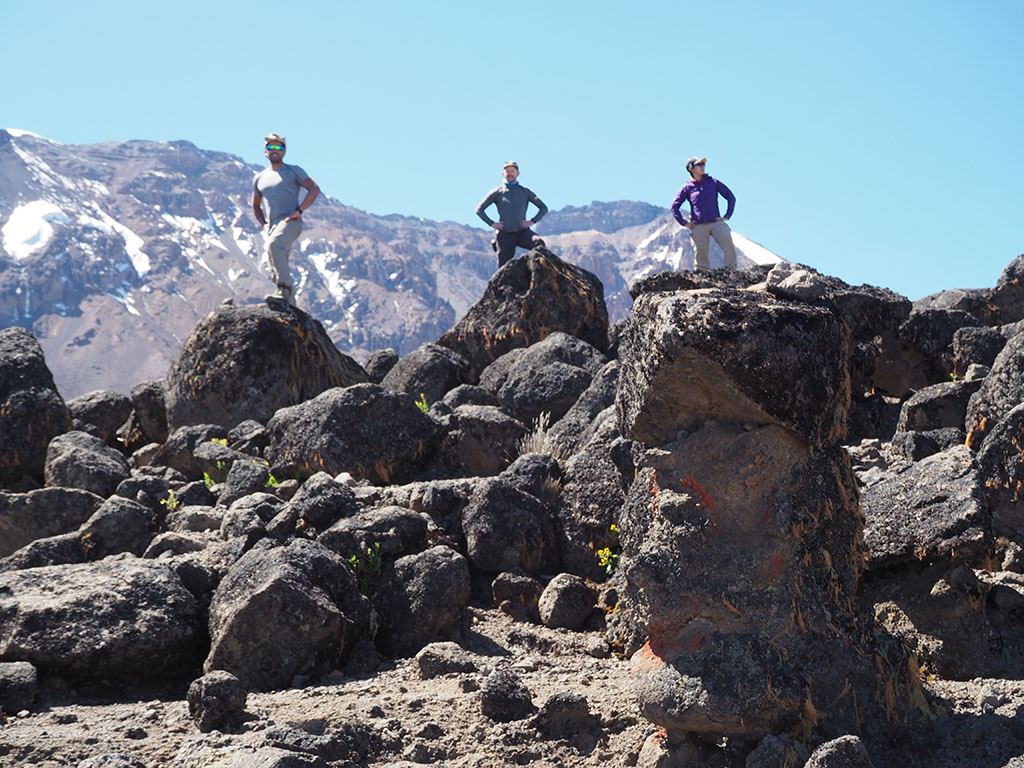 6:30am! Rise and shine! Like yesterday, I was awake from about 5:30am, having slept not too badly. It was noticeably colder overnight, apparently close to zero. Hhhmmm… maybe I would need to sleep in more than boxer shorts. 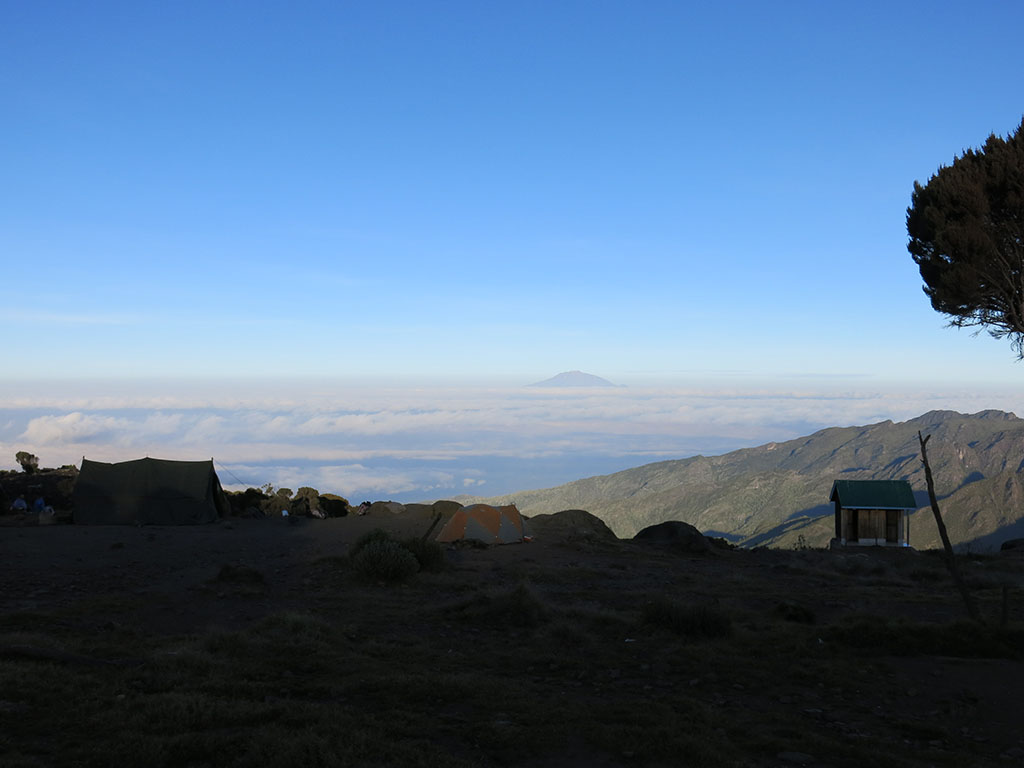 It was straight into a nice bowl of warm water to freshen up, and then brekky. This morning was millet, toast, eggs, and even pancakes! You read correctly. I was eating pancakes. Plus sweet sweet coffee, Africafe no less (so punny, so good!).

Again, CC and I were feeling remarkably fresh, with little sign of tiredness or any aches and pains. How strange! We expected to be cactus from early on, but our bodies felt good. So by 8:30am we were off again. 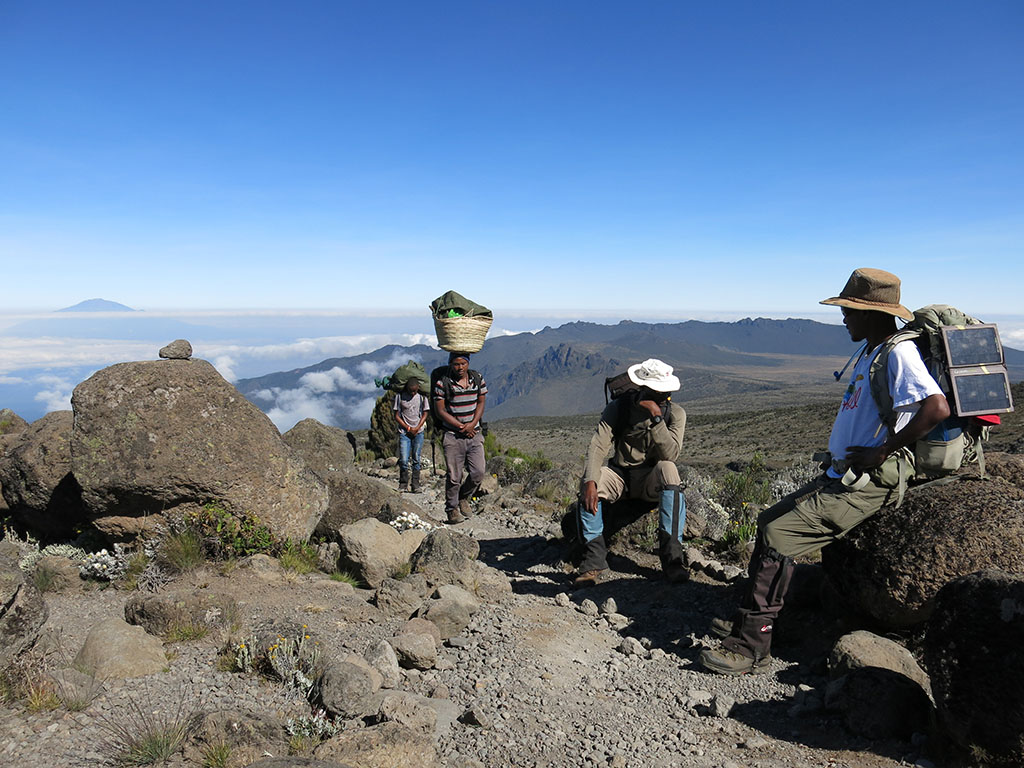 The start hike was through an alpine like region. The sun was beaming down on us and it was super warm. We couldn’t believe our luck with the weather. While we were told “the mountain has its own weather” as a means to be prepared for anything, the mountain was certainly looking after us. 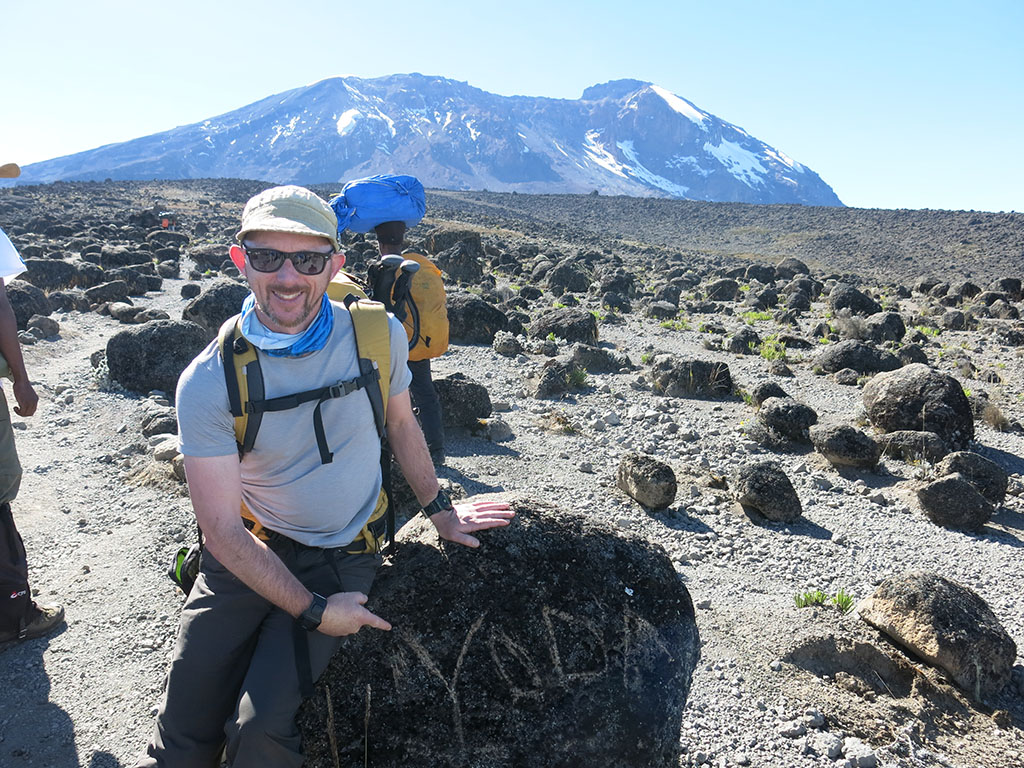 filipe was full of beans 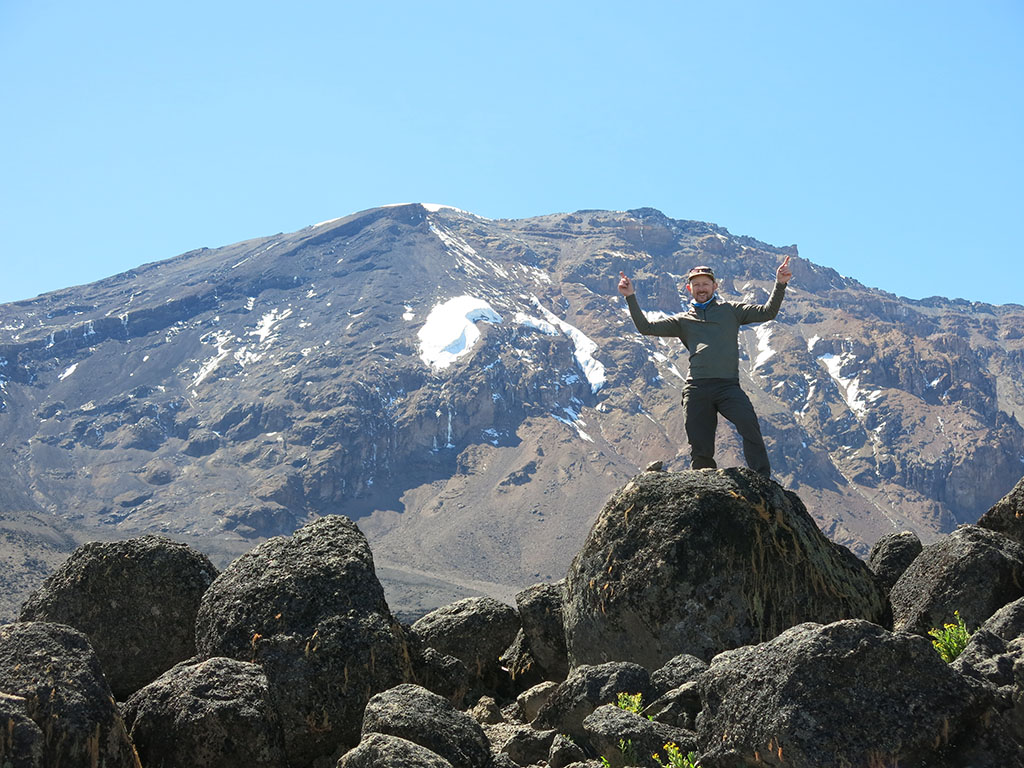 stopping for a gratuitous hero shot 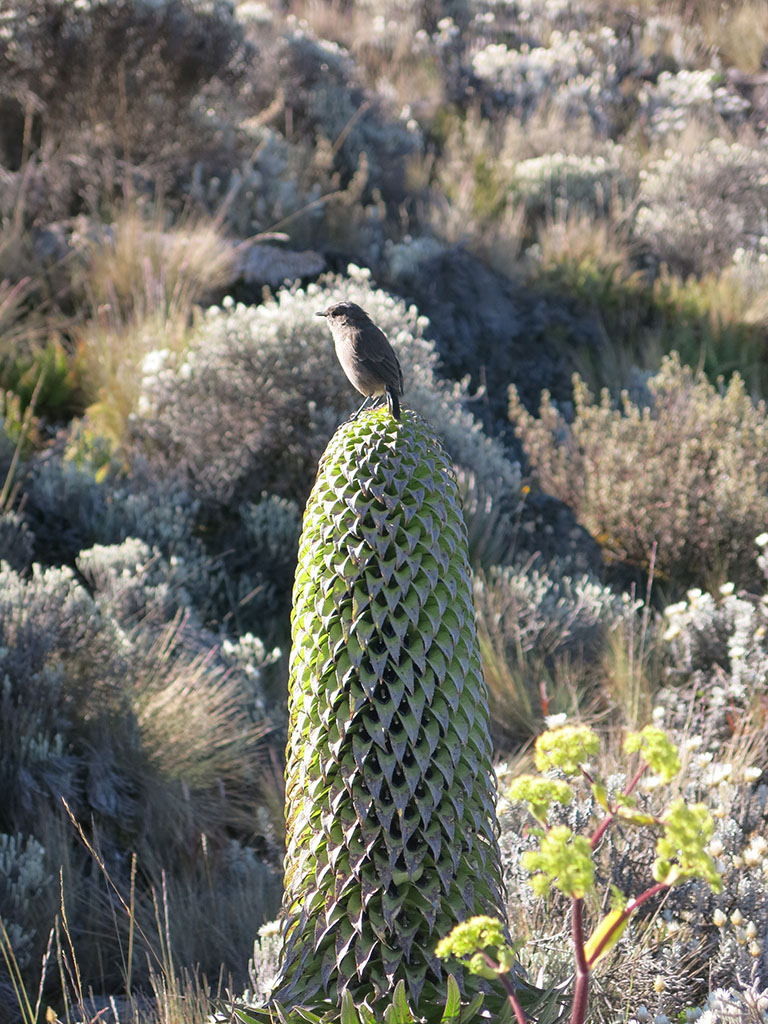 Today was challenging off the bat. While it didn’t seem as steep as the start of yesterday, being at almost 4000m meant being breathless from the start. Again it was fairly steady up and up. It was a gravelly and rocky trail. 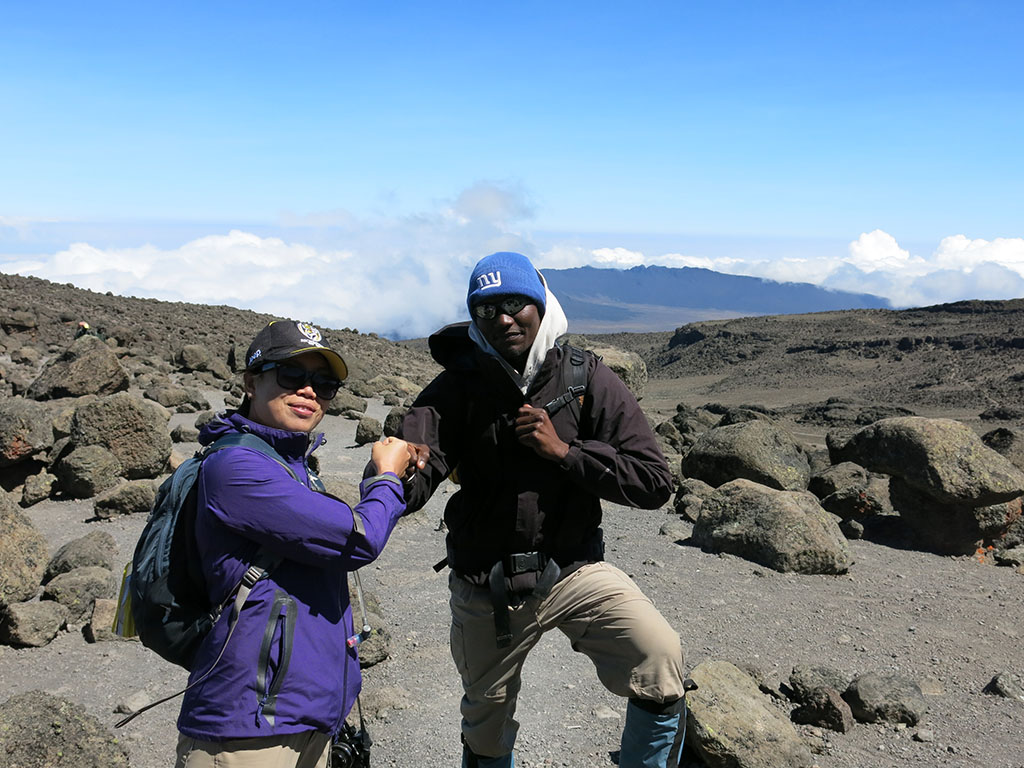 cc and aris were always too cool

In what seemed like no time at all (well 3.5 hours), we had reached our lunch spot… Lava Tower! We were now located at about 4600m, our highest point yet. For lunch the team set up our mess tent so we could stay for a couple of hours. Again, this was a feature of Machame route, having the opportunity to get to 4600m and stay for a bit to get our bodies used to the lower oxygen levels. 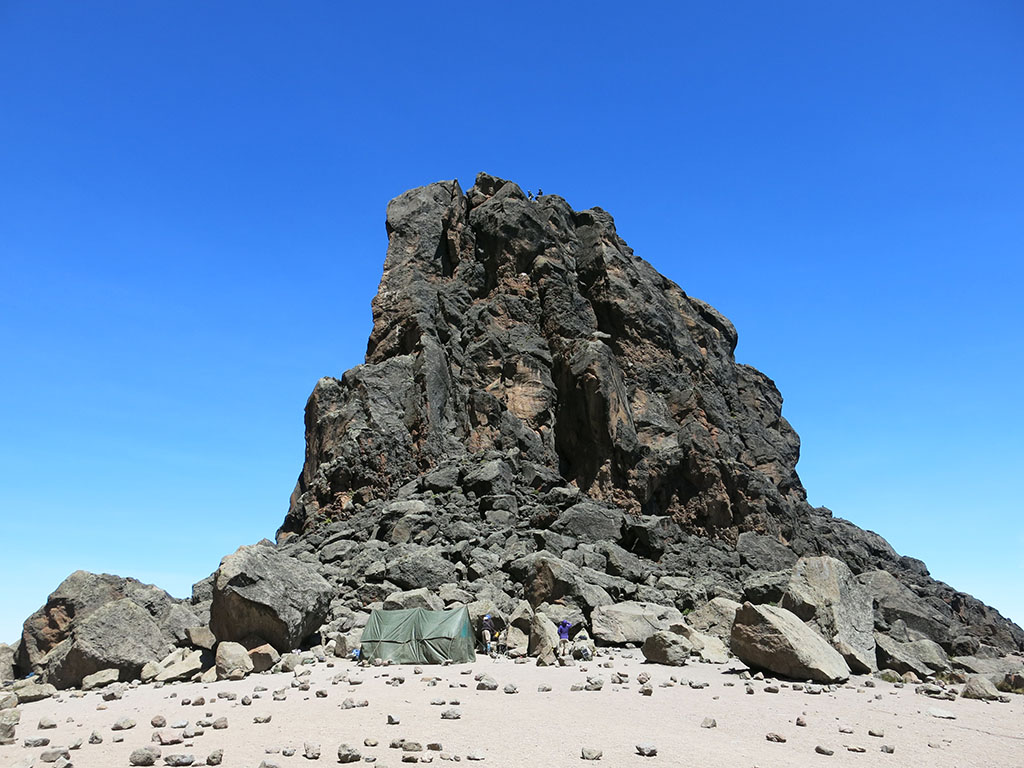 Lava Tower is a tower of solidified lava (duh) that shoots up about 100m. It certainly made for an ace lunch spot. We certainly had no interest in climbing it (and I’m not sure our guides would have let us anyway) but lo and behold, there was Filipe saying hi from the top. Of course he climbed to the top! 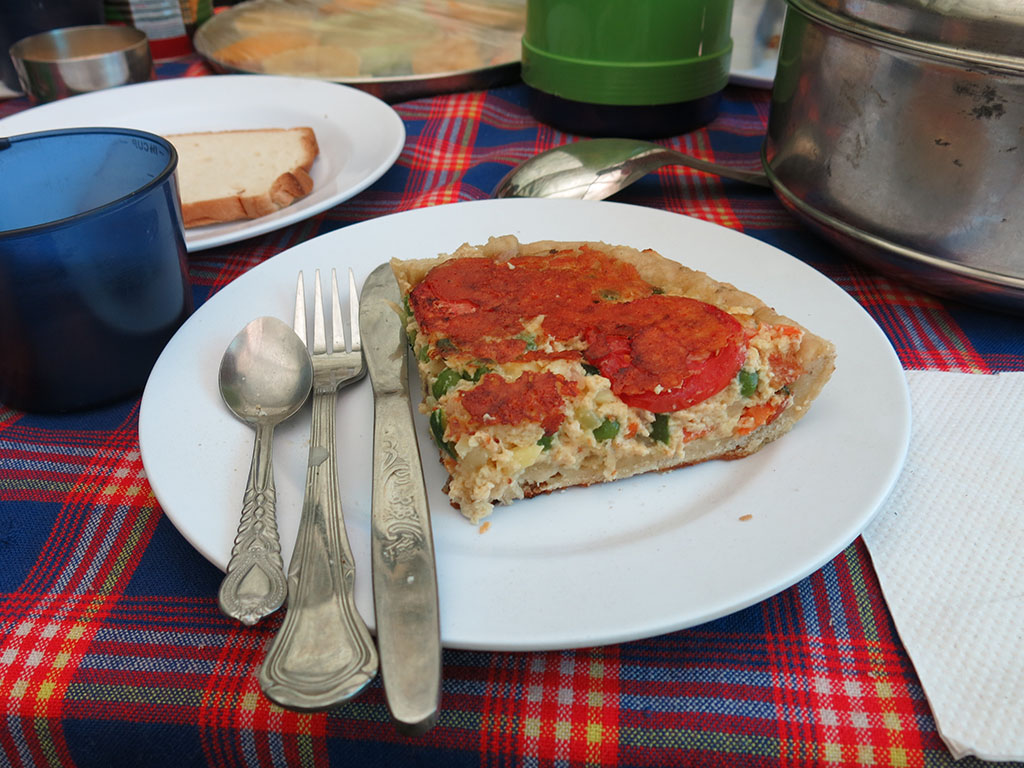 Christopher called us for lunch. You are not going to guess what we had. Quiche. Yep, quiche. How on earth he made an amazing quiche who knows! But it was delicious. We also had a delicious veggie soup to load us full of calories.

It was about now that neither CC nor I was feeling at our best. It was our first time over 4500m so clearly our bodies were telling us that something was up. Both of us were really just a bit tired and headachy, my headache a little worse than CC’s. I had a feeling that it was probably more from trekking 4 hours in the beating sun, but I’m sure the altitude played a part.

We didn’t hurry lunch as Mhina and Aris were happy for us to acclimatise and also the second half of our day was heading downhill believe it or not. So we hung out there for about 2 hours before loading up again and heading toward camp. 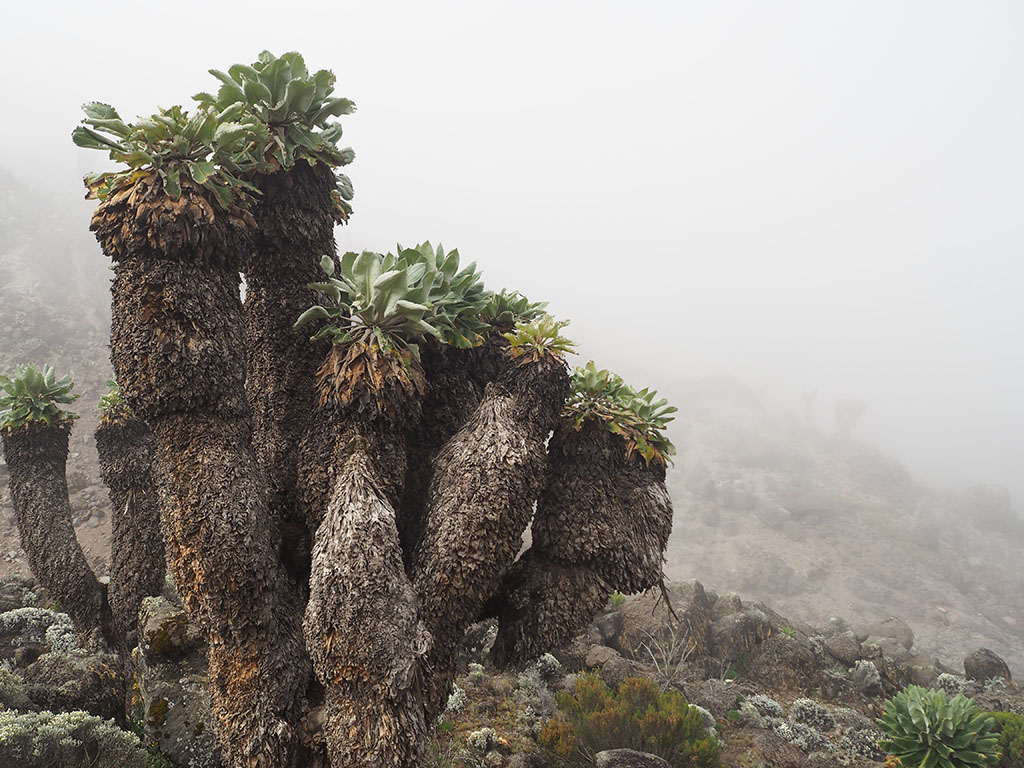 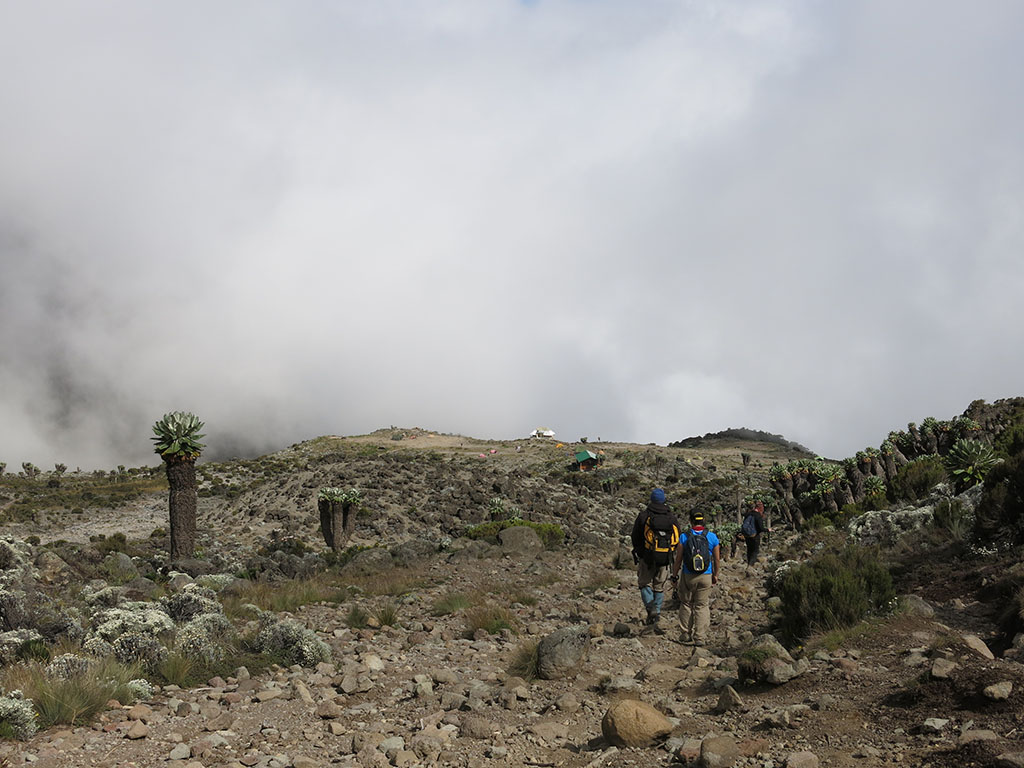 we can see camp!

As mentioned, we headed downward from Lava Tower. For me, downward wasn’t so easy. It was OK, but I must say I felt I struggled a little more than I had to by this point. CC was a powerhouse whereas I was a bit more cautious. I think it was mostly due to my lack of experience hiking and I also found I had to concentrate a whole lot more. But luckily this was a pretty short session of only about 2 hours. At 3:30pm we had arrived at Barranco Camp. Yes! 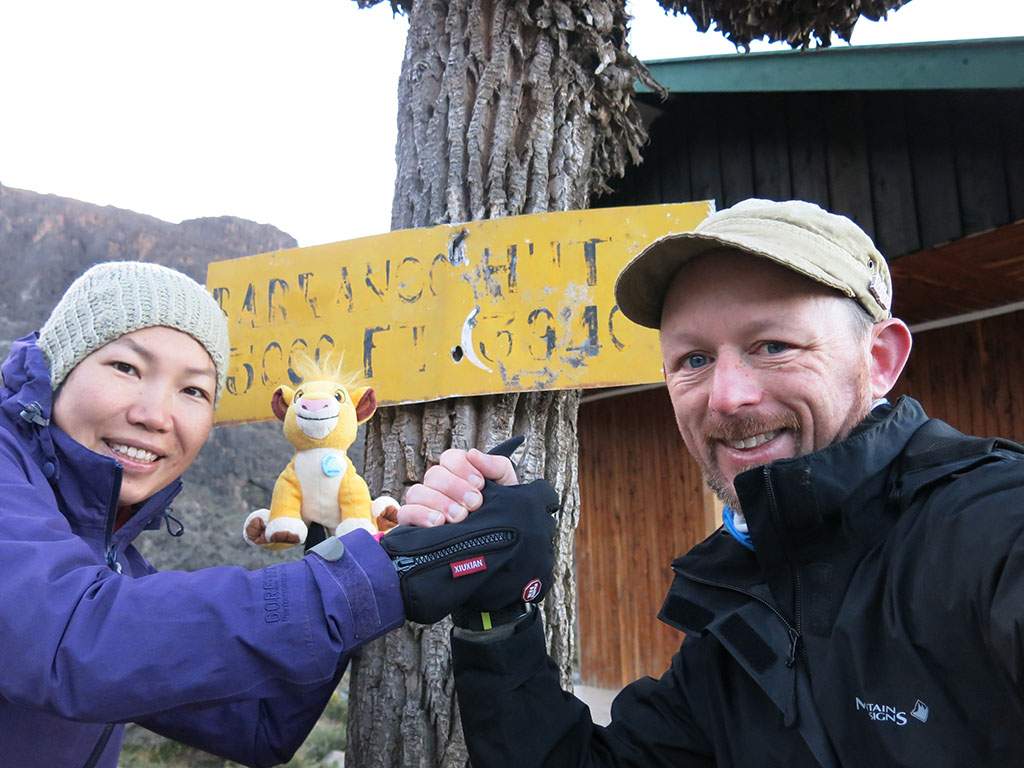 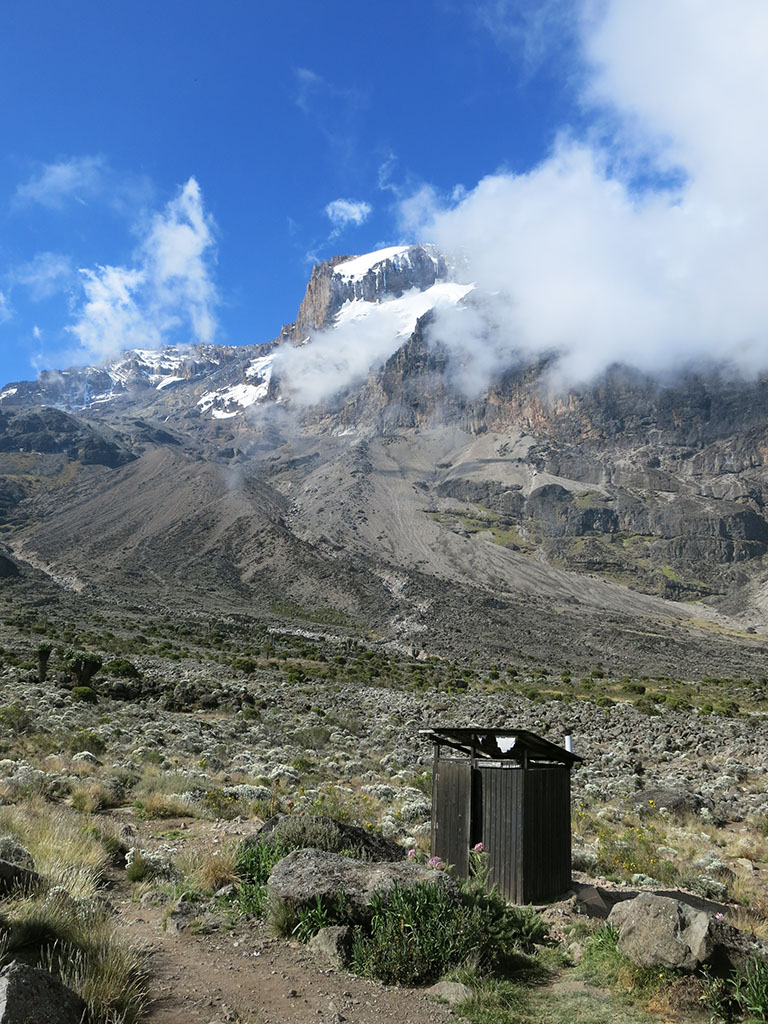 another loo with view 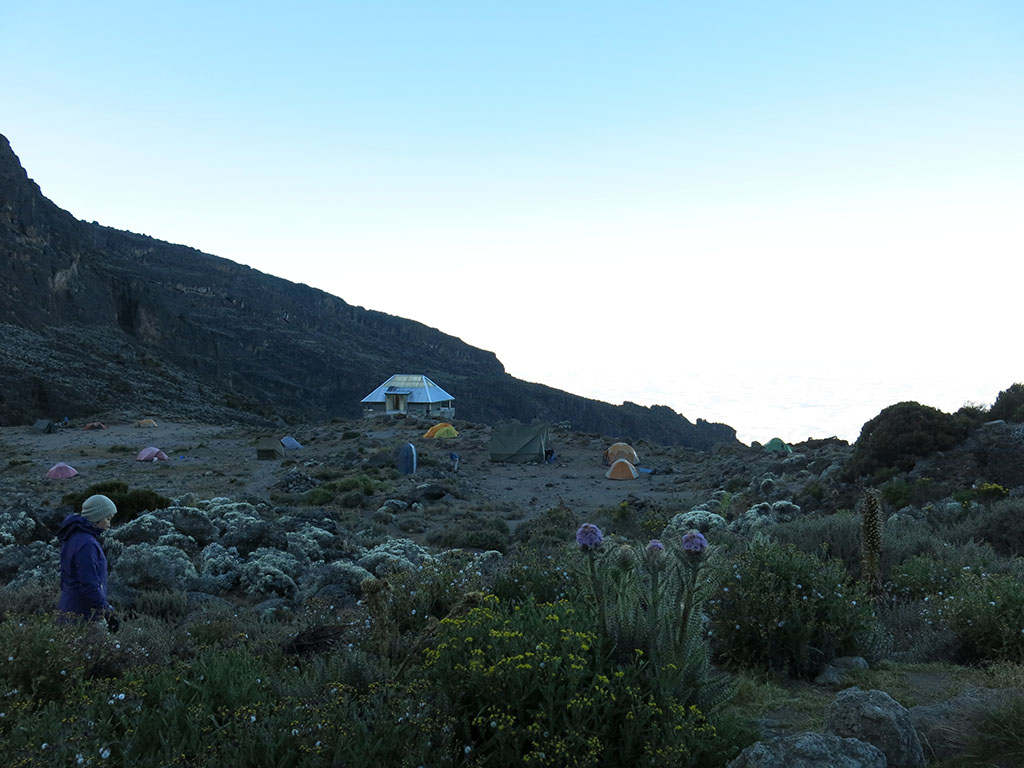 looking down on the campsite

We were treated as usual to some hot drinks, popcorn and biscuits. It was sitting down to a snack that Mhina threw us a curveball. He suggested that we could combine our day 4 and 5 into one day. They were originally to be 2 short acclimatisation days of 3-4 hours each. However both Mhina and Aris felt that we were hiking really strongly and that we would not get much benefit from the extra day. Ultimately it meant that we would summit a day earlier than originally planned. Aarrgghh! It was all too real!

After talking it through, CC and I decided to go for it. If Mhina and Aris believed in us, then we could do it! We liked the idea of not having days sitting around, as well as hitting the summit a day earlier. Mhina also suggested if we did that then maybe on summit day we would not come down so far, and stay at an intermediary camp, which sounded OK by us too. It was all coming up CC and Butt! 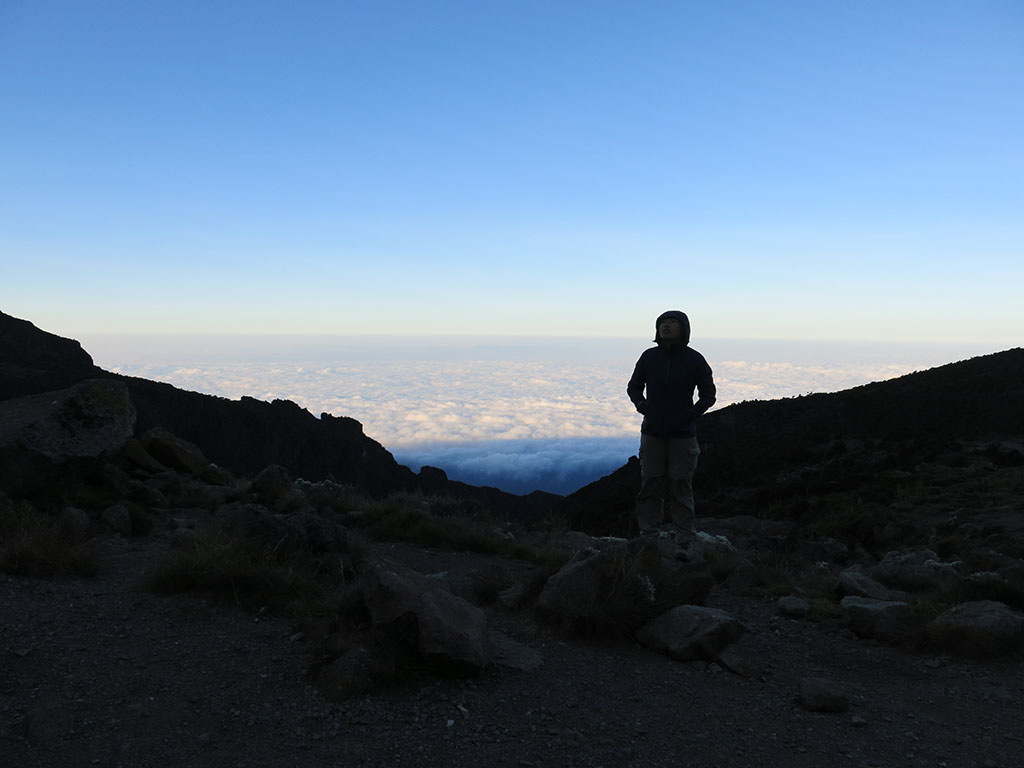 Excited but tired after our day, we had another great dinner (zucchini soup, beef stew and pasta) and then hit the sleeping bags for rest before our (now) epic two-legged day.