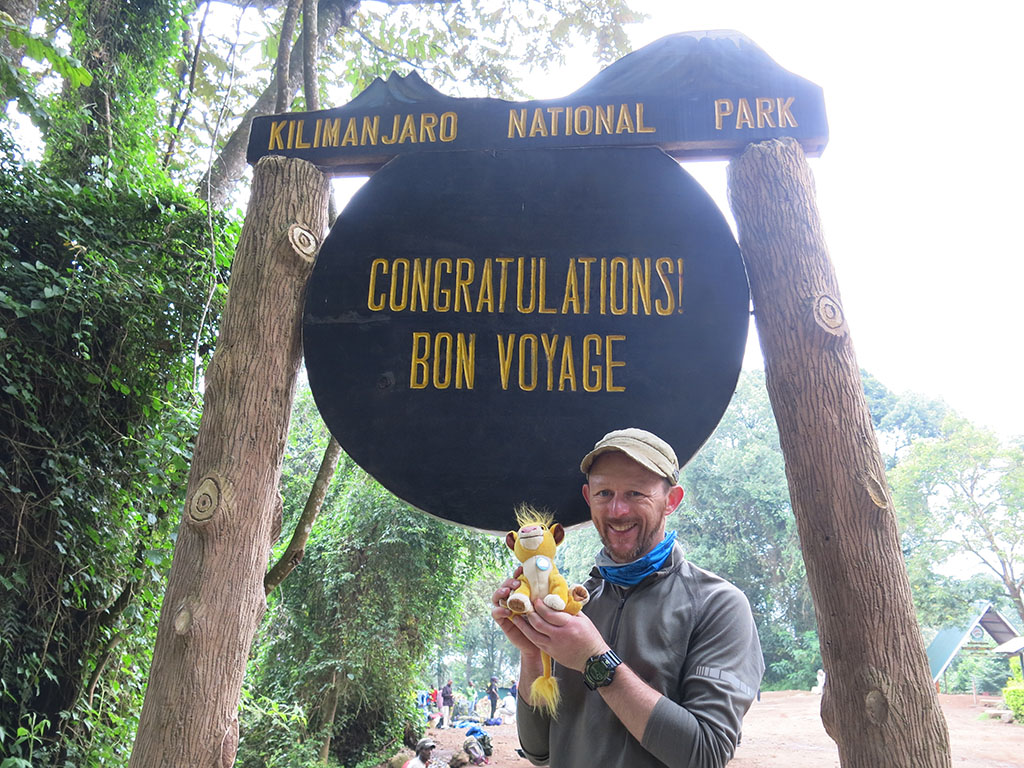 We were so grateful for spending the night at the earlier camp. It meant less walking and more time for rest. After our epic summit day we were very thankful. Good job Mhina! 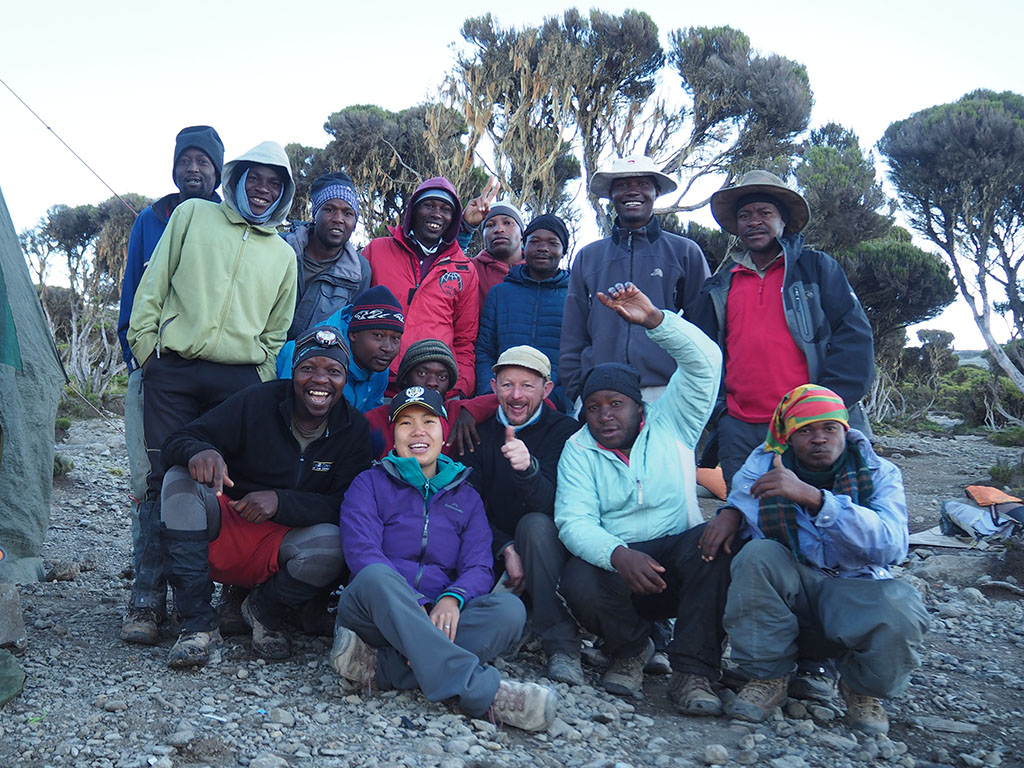 Mhina decided to get us going earlier though given we had stopped at an earlier camp. So it was a 6am wake up call to get going. I was awake at 5:30am as usual (although CC would have been happy with some extra sleep) so was good for me. At breakfast we got a group photo with our whole crew which was ace. We also presented them with their tips and a little extra gift from us. They were all amazing. Mhina, Aris, Rashili, Christopher and the rest. We could not have asked for any more. But there was no time for hanging about… by 7am it was back on the trail.

The path from Millennium to Mweka Camp was a very rocky and steep path. We couldn’t imagine having done that at the end of summit day, as it involved a lot of scrambling and thinking about best ways down. But being fresh we smashed it! in just over an hour we were at Mweka Camp. 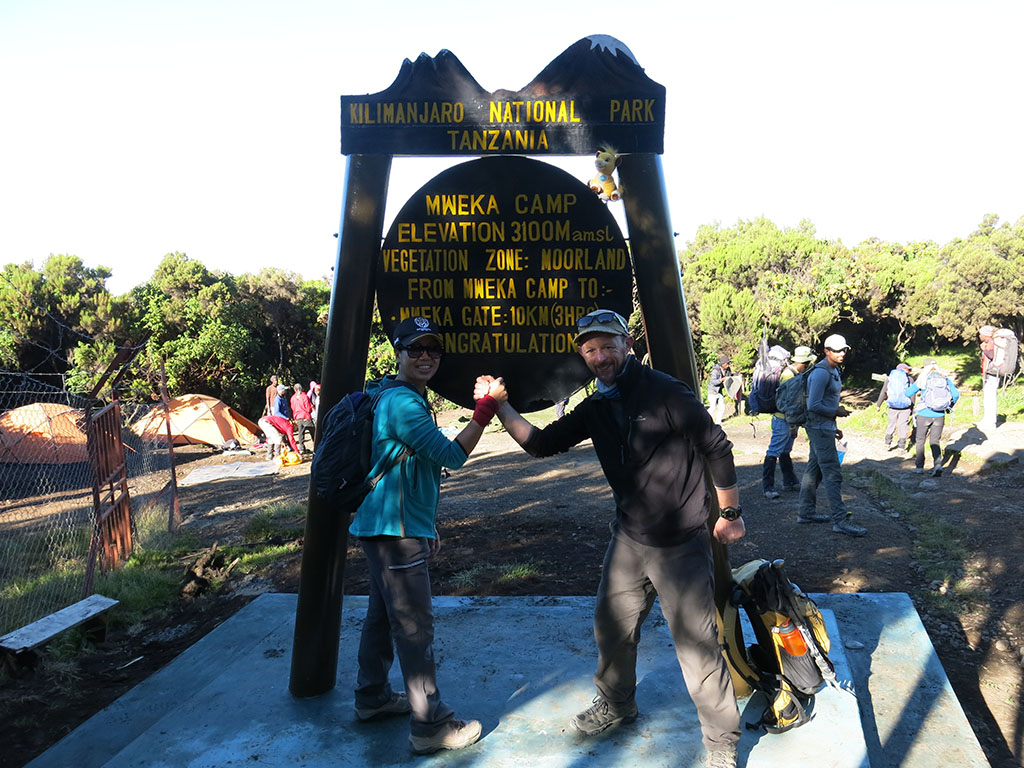 Leaving early meant we had the good fortune to yet again see our American buds! It was become a joke now, all these farewells. We got to see “Canada” as well (I will miss hearing “Australia!” each time they saw CC and I). Speaking with Tony, he said that this same path took them about 2 hours at the end of yesterday because they were so tired. Win us!

We left our final campsite at about 8:15am for the final 9km out of the national park. This was a fairly straight forward path through the rainforest, with a proper trail and many many steps. Entering the rainforest was a nice change of scenery. As we were walking I heard a rustle in the trees… monkeys! We saw our first wildlife of the hike on the last day! It was a bunch of blue monkeys hanging out, including lots of little ones.So exciting. 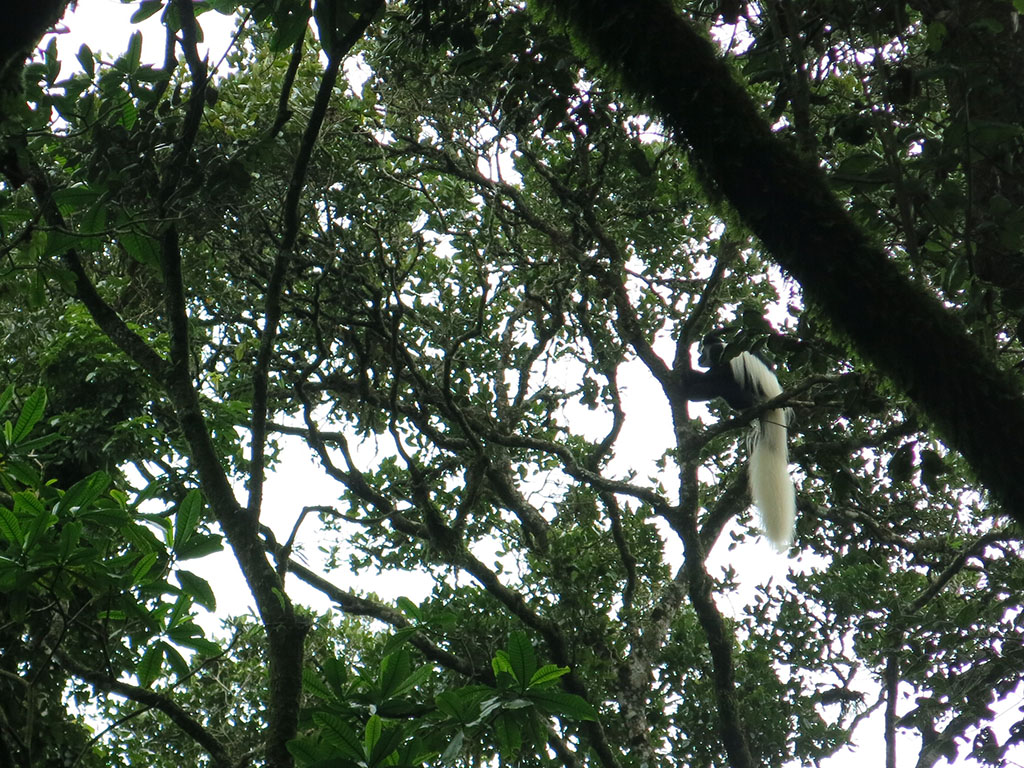 And just down the trail we saw our first Colobus monkeys as well. These guys were the best, with their black and white hair, and long hairy tails. I could see why they were called grandpa monkeys. 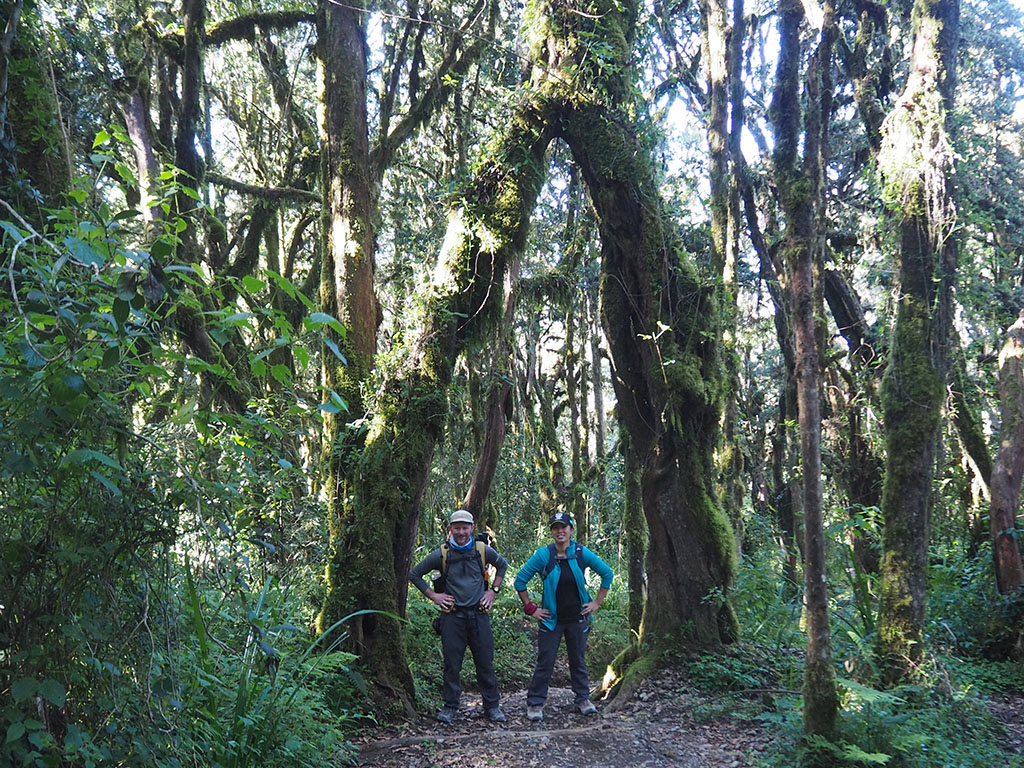 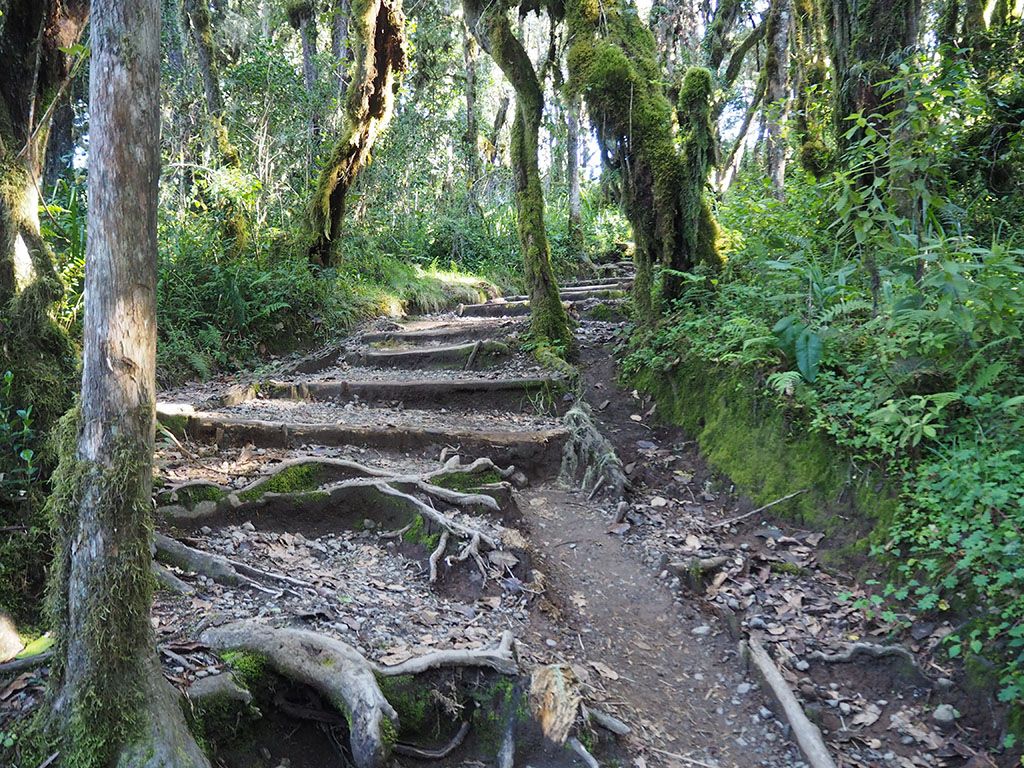 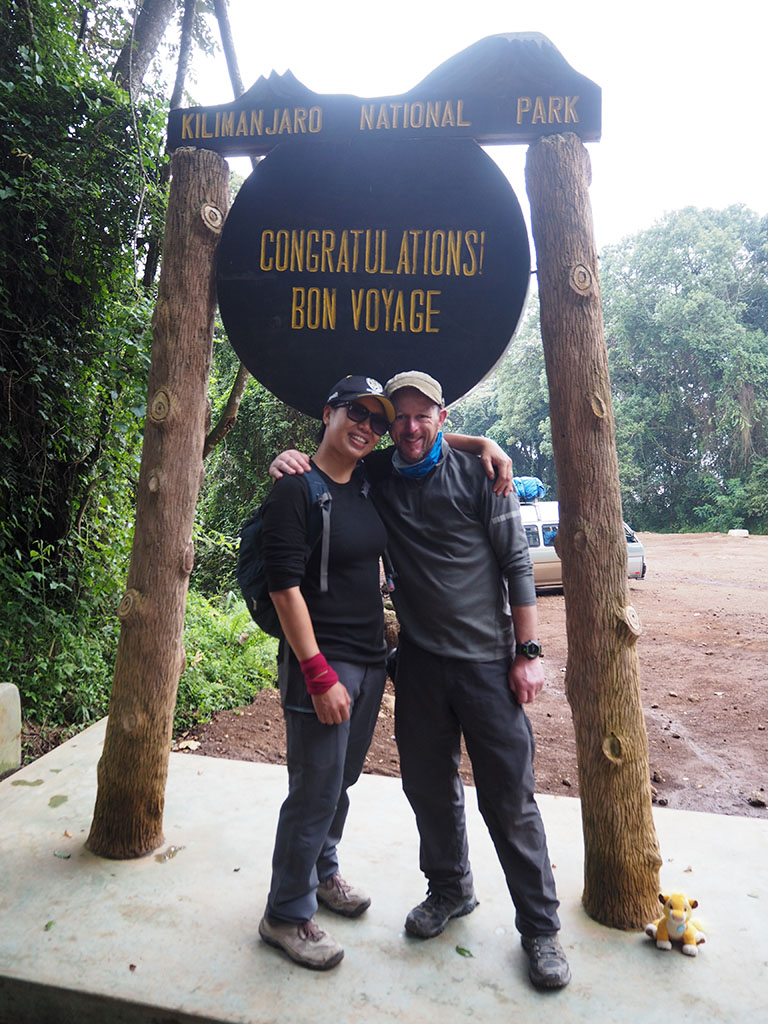 But at about 11am we reached Mweka Gate. DONE!!! We couldn’t wrap our heads around it. It was quite amazing and surreal and relieving to think we made it. We were also fortunate to finish with Tony and Filipe, Canada and even Ryan. What a great bunch. 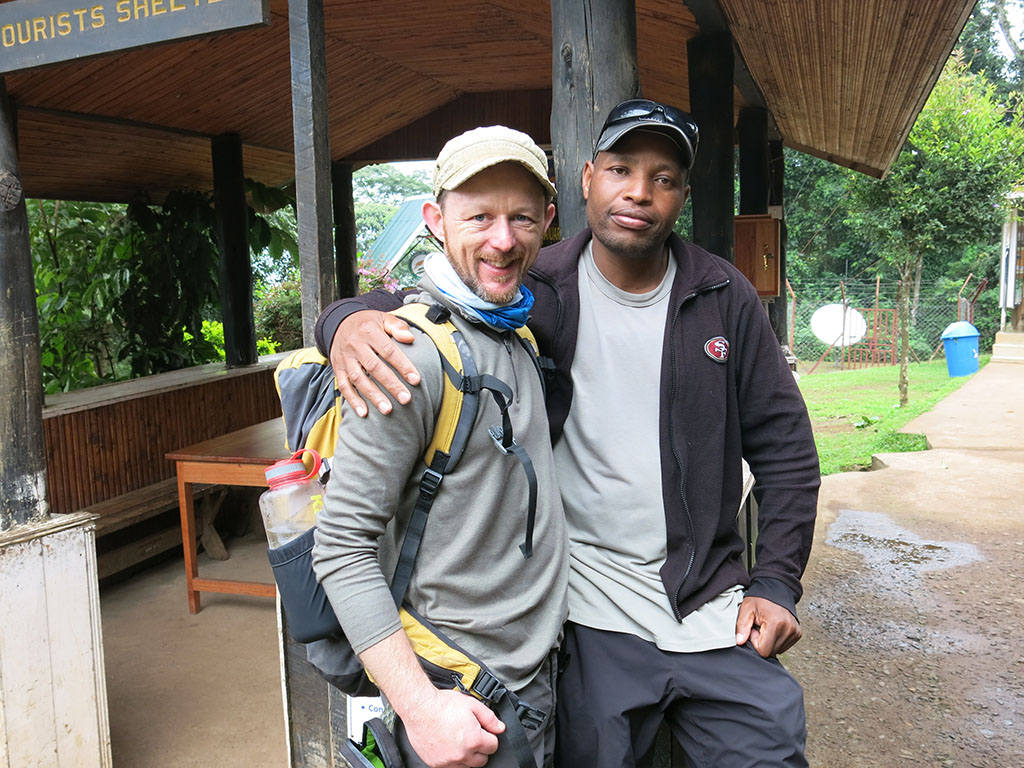 There was not much left to do except officially sign out of the park and say our final final farewells. We loaded into the min van with our crew and waved goodbye to Kili. Wow.

Our day didn’t quite end there though. Waiting for us in nearby Moshi was Walter, the head of Galloping Safaris, our great trip coordinator, and trusted friend of CC (and now of mine). He was waiting to shout us lunch to celebrate our achievements which was lovely. We unwound over lunch with Walter, Mhina, Aris and Rashili. Both CC and I were fairly exhausted, managing to eat most of our lunch and just decompress. After an hour we loaded up again and headed to our home for the next few nights, the Iburu Safari Lodge in Arusha.

When we returned Mhina and Aris sat CC and I down and let us know how important it was to have tourists like ourselves there in Tanzania, and supporting a local company. This was great to hear. But then super excitingly he presented both of us with official certificates from the Kili National Park, commemorating our reaching the summit! Woo! It was signed by Mhina as well as park officials and had our official summit time as 7:50am on the 31st June. Now it was indisputable 🙂

Saying goodbye to our amazing guides was a bit sad given how much they had done for us. But we said our farewells and then immediately settled in to our room and crashed. After some emails and internet action (being offline for a week certainly is different!) it was time for sleep. No dinner, just sleep. I think we earned it. 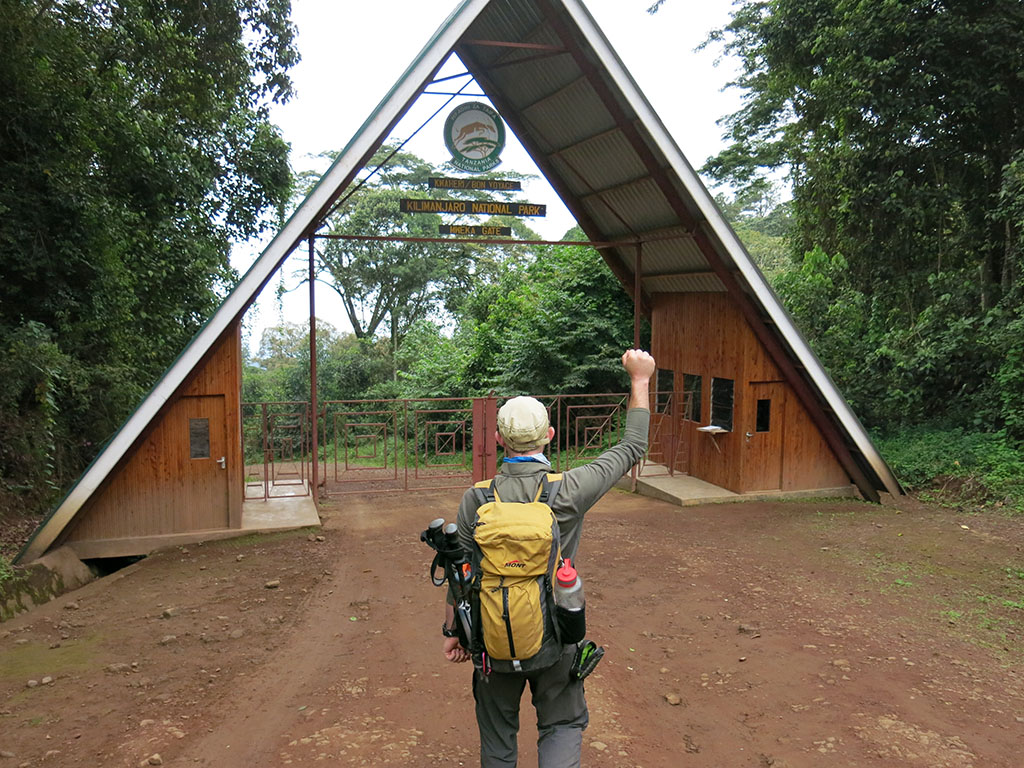