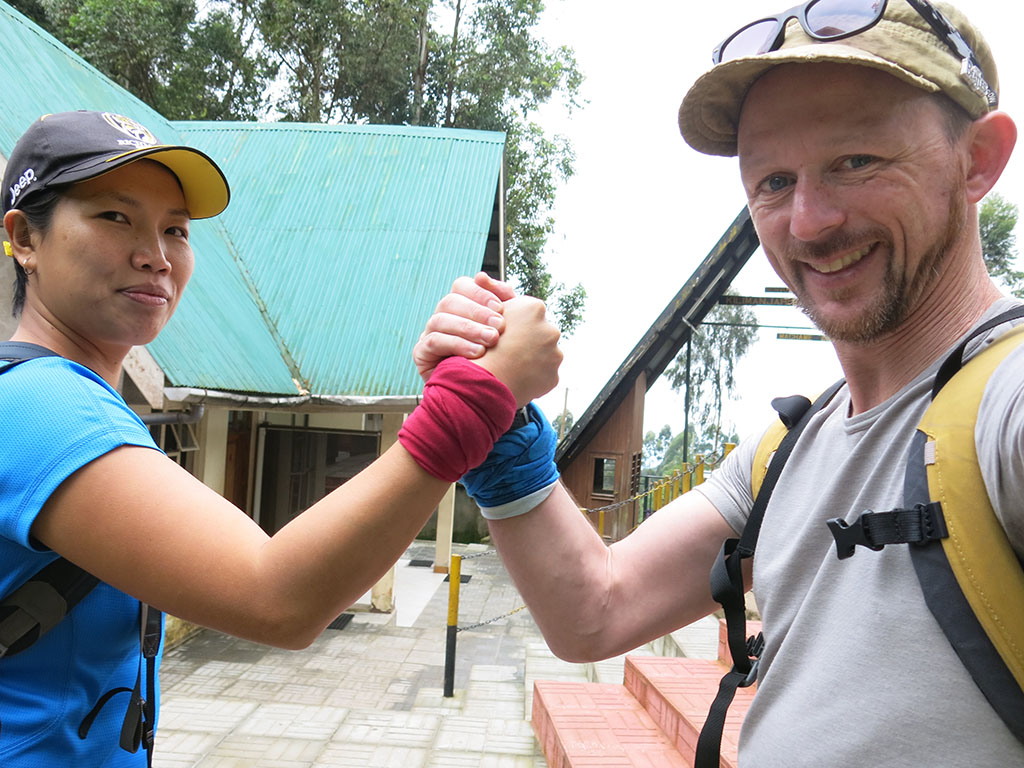 dillon, you son of a…

It begins! I can’t remember at what point this hare-brained scheme started but it doesn’t seem like that long ago. I had always wanted to do an epic, high altitude hike. Everest base camp was it for a long time, but over the past few years Kilimanjaro had crept up to be the main contender. Why? I liked the idea of hitting the “highest” of something, in this case highest peak in Africa and most importantly the highest free standing mountain in the world. There were also tough times happening at Everest, and to be honest I had heard that the trek to base camp was becoming pretty crowded. So Kili had the edge.

Then one day my bud CC says “are you interested in climbing Kili?”. “Hell yeah!” I reply, and next thing we know, flights are booked and the climb itinerary is worked out. We are climbing in May!

we have to go how far?

Zoom forward some months and here the two of us are, loaded up at the Machame Gate at Kili, our guides finalising the paperwork needed for us and our 13 strong crew (yes, 13 people for the two of us) to be able to enter the national park and start our 7 day (soon to be 6 day) long hike to the top of Africa and back. To this point we had both trained hard and done some altitude training as well. Did I feel prepared? Well, as prepared as I could be for something I really didn’t know how I would go (especially the altitude)! But at midday on this first day we were just ready to rock and roll. 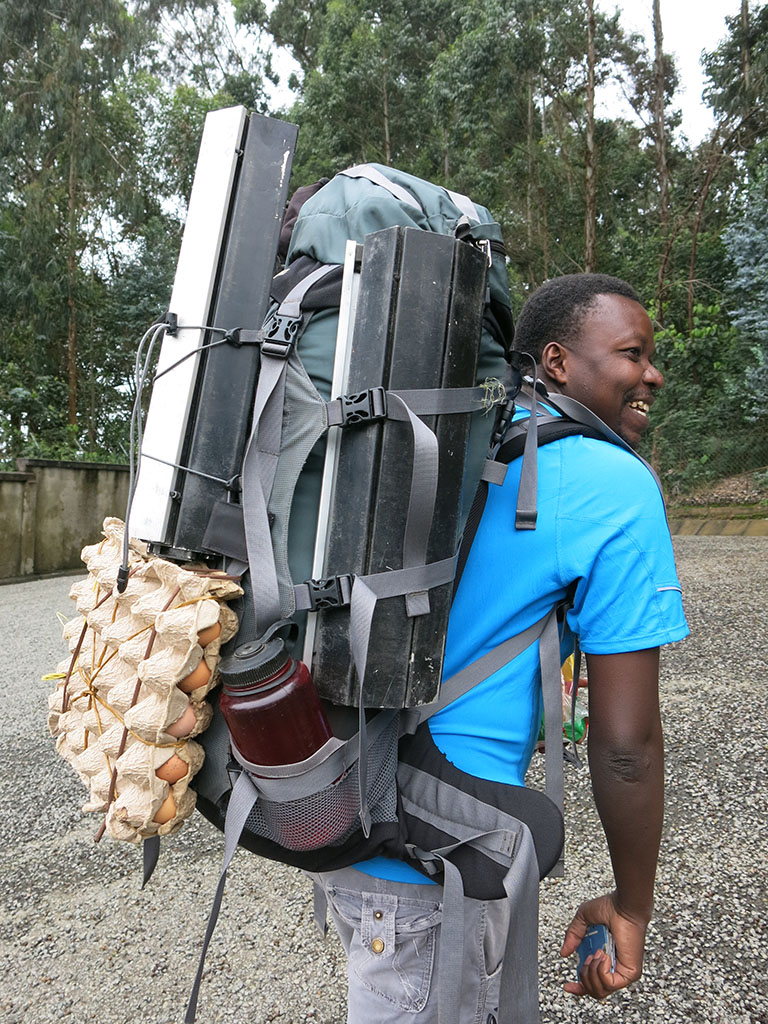 yes, those are eggs

Seeing our team all loaded up was both comforting and daunting. How on earth were they carrying so much! Our chef (yes, we had a chef) had dozens of eggs strapped to his pack! It was good to hear though that the national park takes the welfare of the porters very seriously, and that they can carry a max of 20kg (and are weighed throughout the trip to ensure this). That went a fair way to explaining our big crew.

It is about now I should introduce you to our main guides. Mhina was the head guide and was a great guy with a big phone. Yep, it was about the size of an iPad mini. It was hard to miss as throughout most our journey he would be on it when he had reception, organising this, that, and the other for us (or just checking in with Walter, the tour company manager). Mhina had summited 200-300 times according to his estimations. He seemed pretty easy going, however was quite adamant that he would be keeping an eye on us and that we were to let him know if we felt a bit ill before taking anything so he could check us out and provide expert advice. Perfect blend of chill but serious when he had to be. Our assistant guide was Aris and he was a tall relaxed dude with approaching 200 climbs under his belt. We felt super comfortable with both Mhina and Aris straight up and knew that we were in good hands. 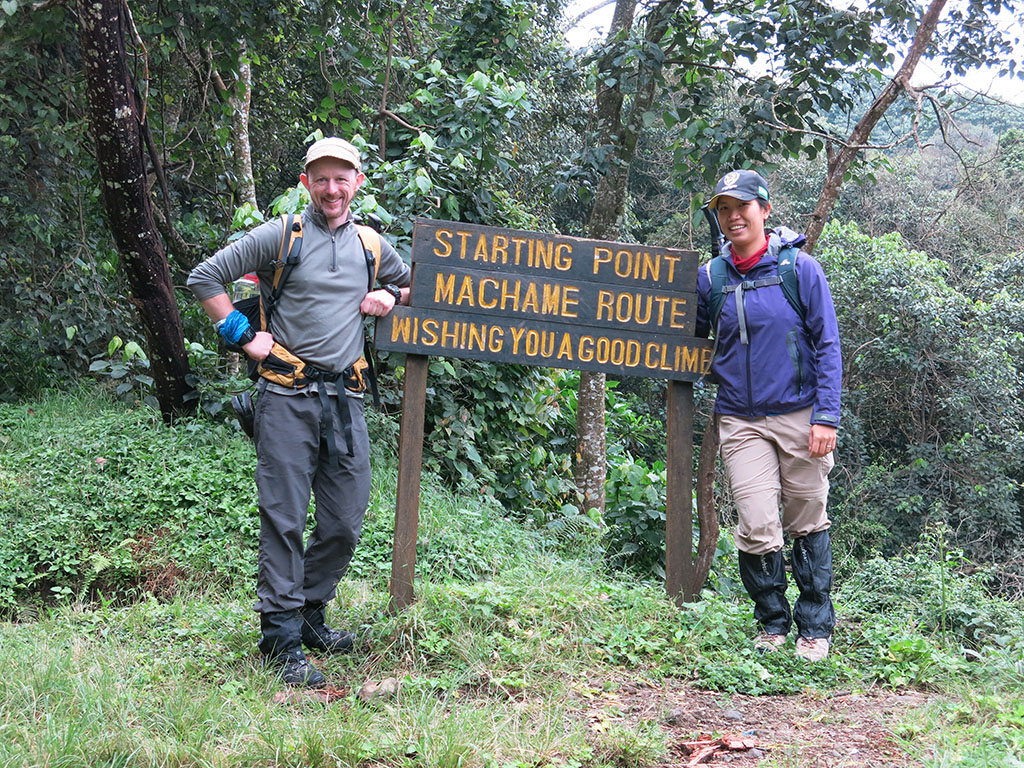 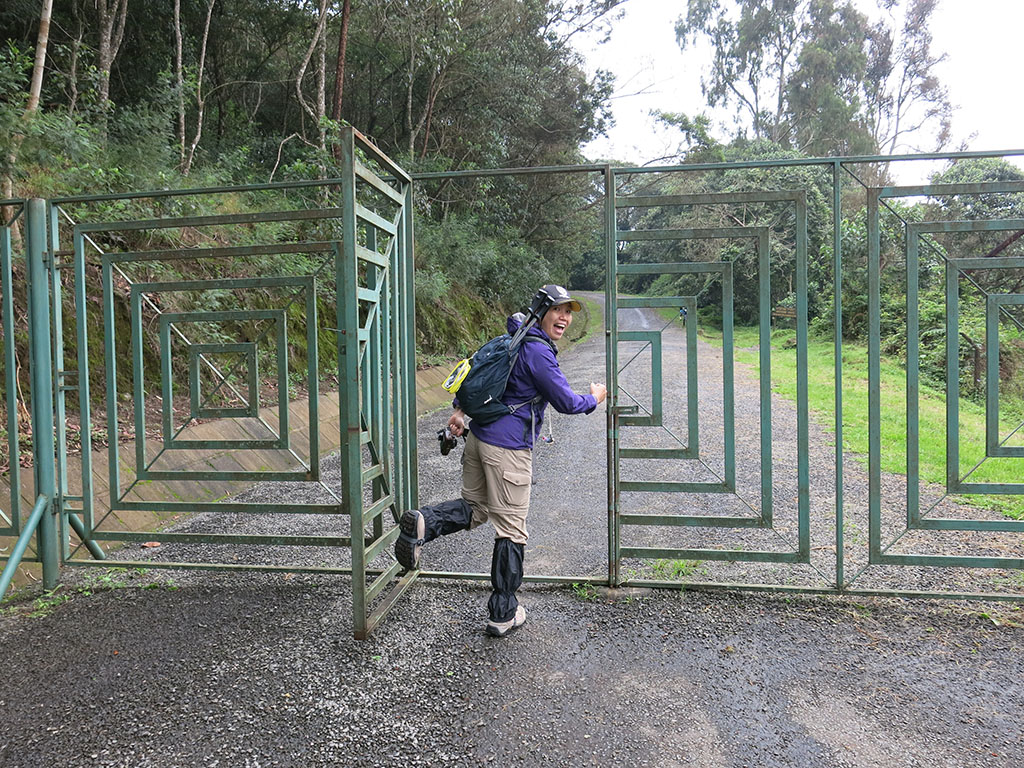 cc couldn’t wait to get going!

After a small delay with some African payment system issues, we were off! Our trek started in the rainforest on a fairly well defined and looked after path. More like a regular hiking trail that we would be used to. Incline was obviously heading steadily upward, but a nice (relatively) gentle introduction for our first day. There was not really any wildlife to speak of… we were on the lookout for monkeys, but alas did not see any on our way up. Birdlife too was at a minimum, with only some massive ravens (with a distinctive white collar) to be found. 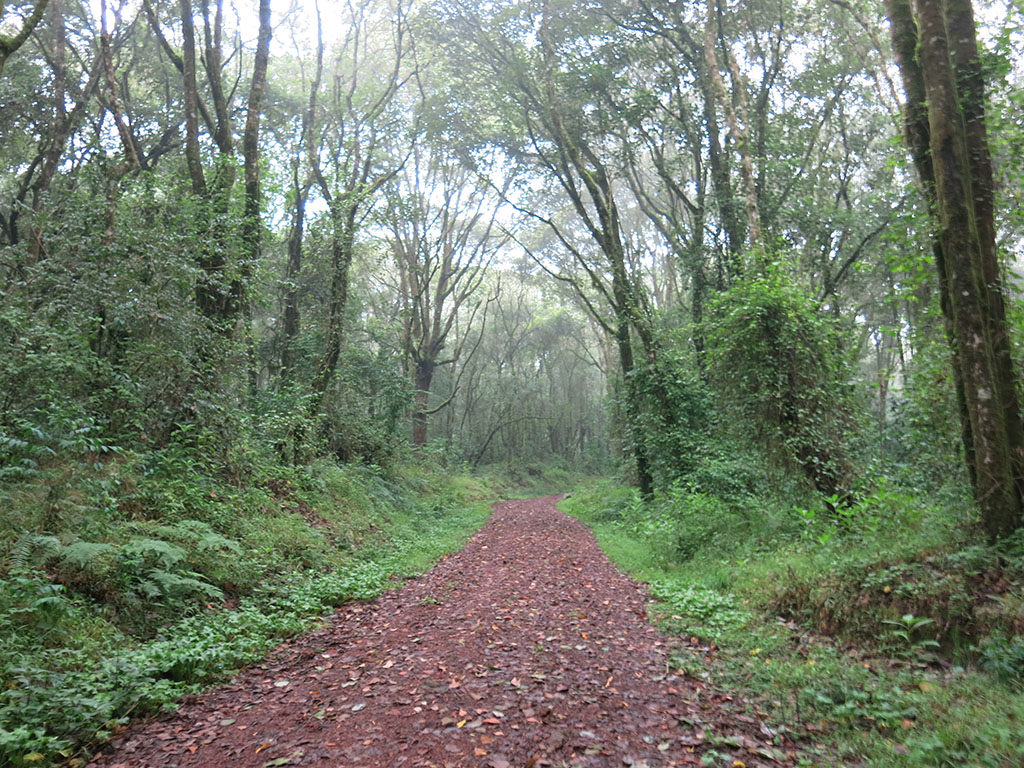 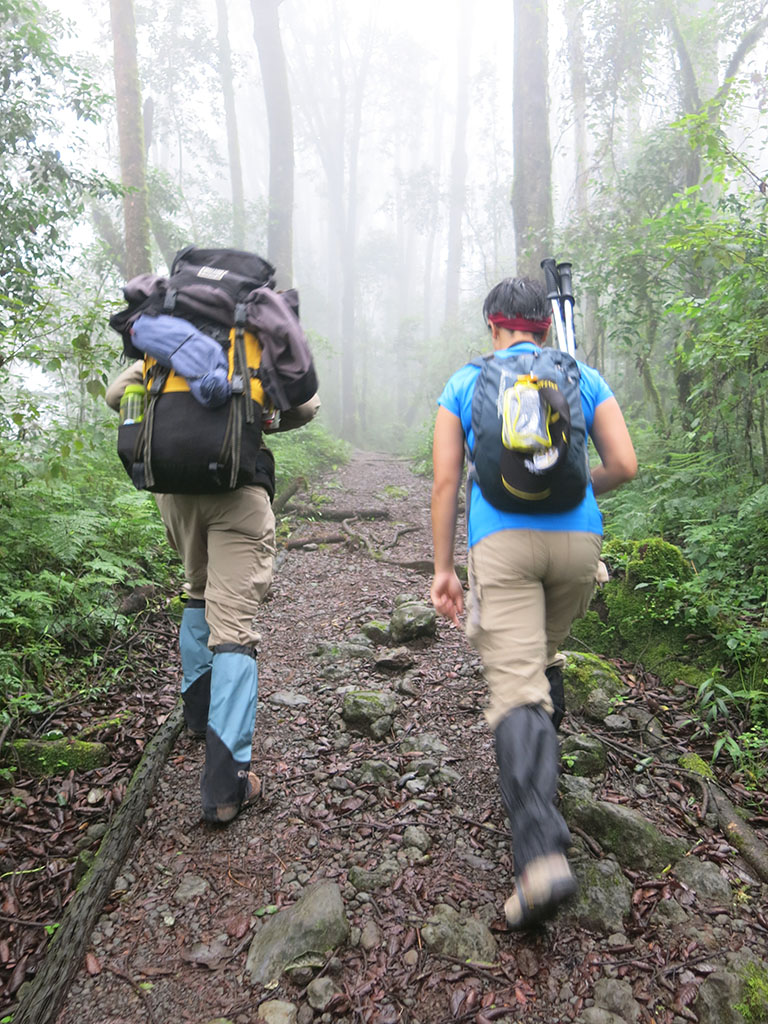 the odd bit of colour popped out

At one point we hit well kept steps to get us heading upward at a steeper clip. So far so good! The weather was slightly overcast, which meant it was nice cooler conditions for hiking. 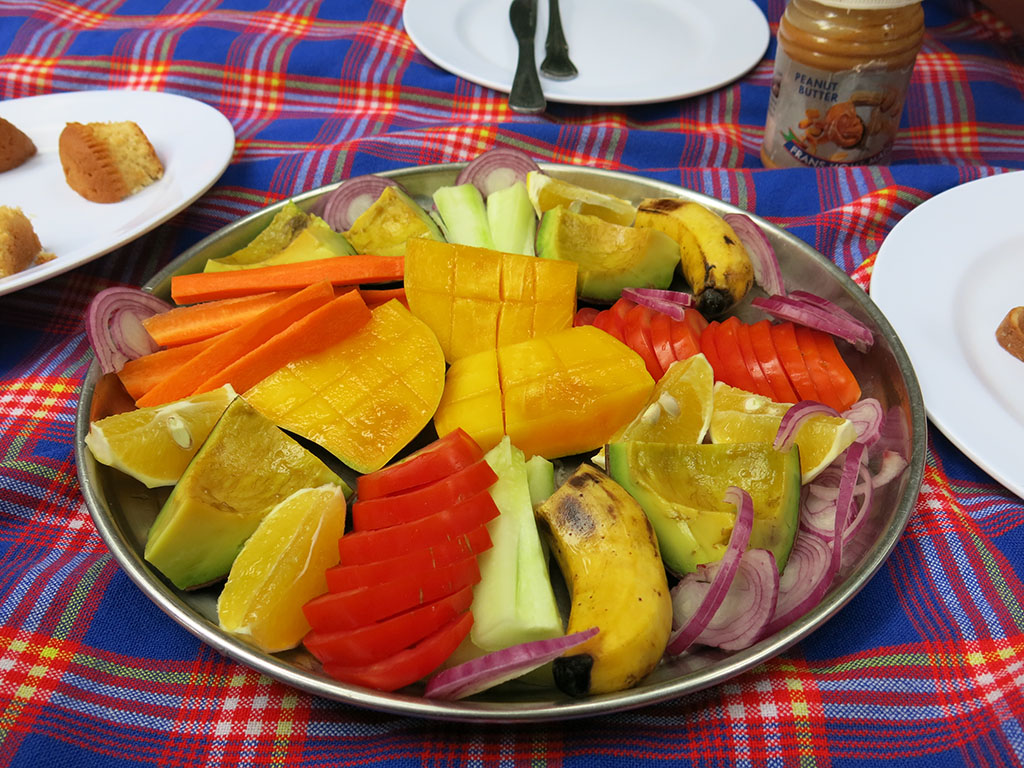 the first of many tasty lunches 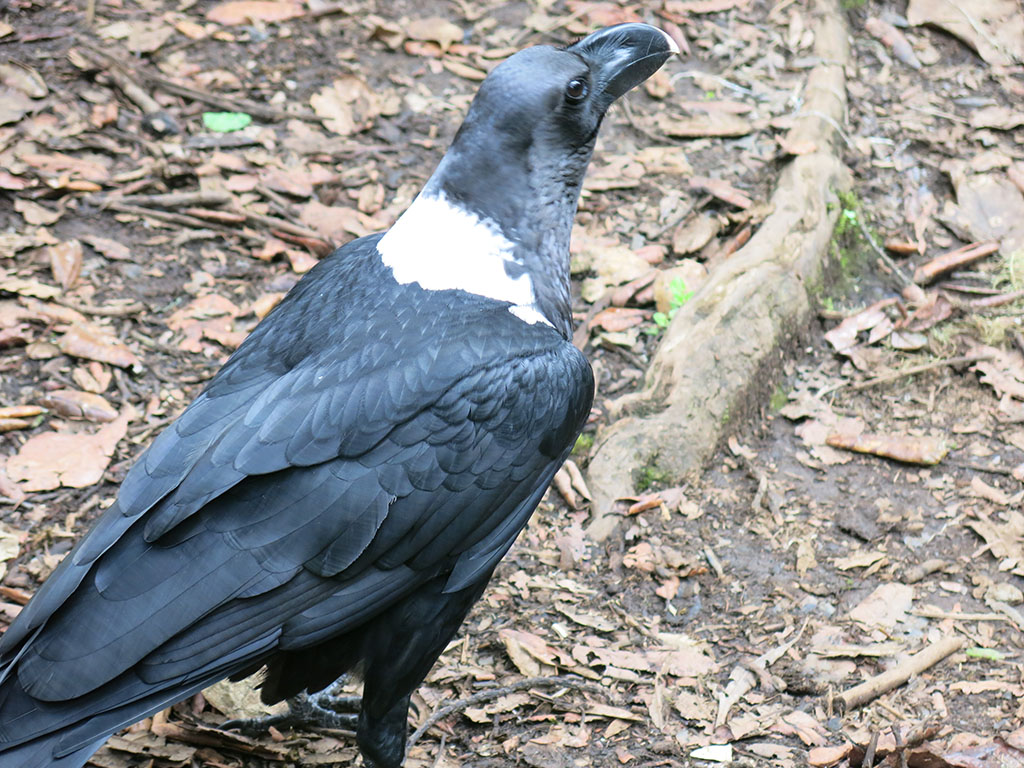 stay away from my lunch!

We hit the lunch point after about 6km and this was our first indication that we would not be wanting for anything on this hike. Salad, fresh fruit, avocado, bread, muffins and fruit juice all awaited for us on a picnic rug in the sun. Tasty! The ravens hung about waiting for us to leave any meagre scraps for them, at some points becoming more brazen as they approached the rug. Sorry guys, not today! 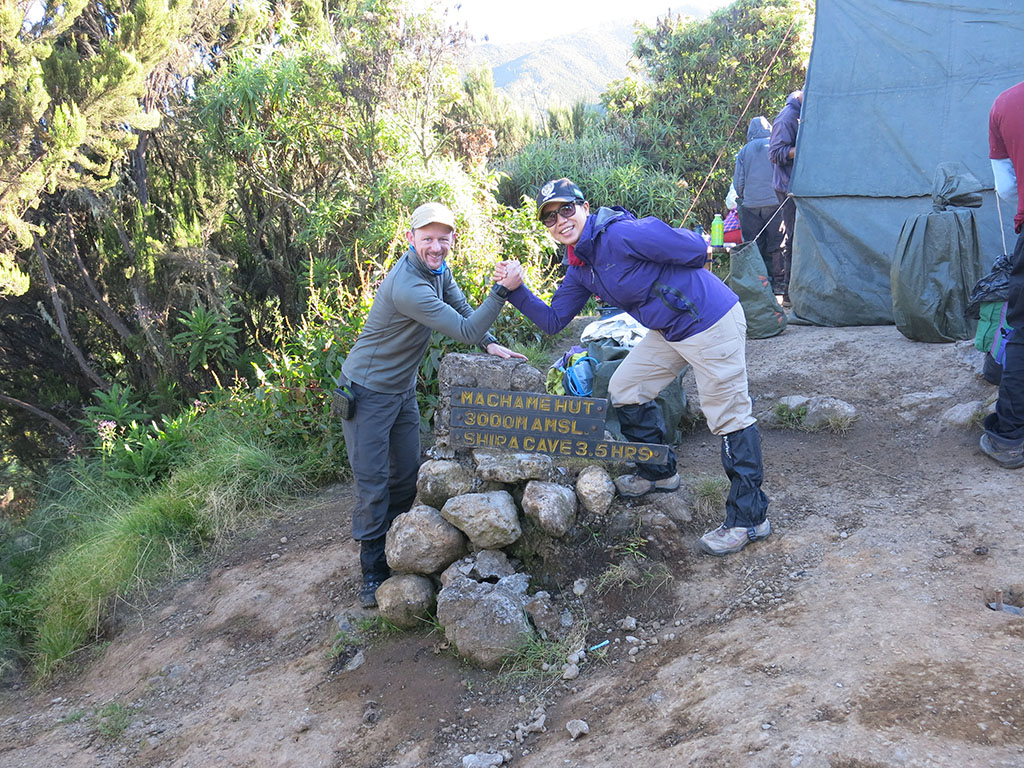 Filled bellies, we kept hiking. More steps with the odd flatter portion kept us going for another few hours. At about 5:30pm we arrived at Machame Camp. I was not sure what to expect of the campsites, but this was a quite big, well looked after site, with dedicated (bush) toilets. Luxury! I had the feeling that while this would be a tough climb that it would not be completely roughing it. We also met up again with Tony and Filipe, two American dudes who we initially met on the plane to Kili from Doha. Both hailing from LA, Filipe was a fitness instructor and Tony one of his clients, who like us had decided Kili was there to be climbed. It was good to see them again and start to establish a good camaraderie with them, especially since it was likely we would be on the same trail for the next week. We also met two lovely French-Canadian gals from Quebec, as well as Ryan, an enigma of a college student from NY. It was fascinating to see the types of people who decided to do something like this. While we were all quite different, clearly we had the same spirit of adventure inside. 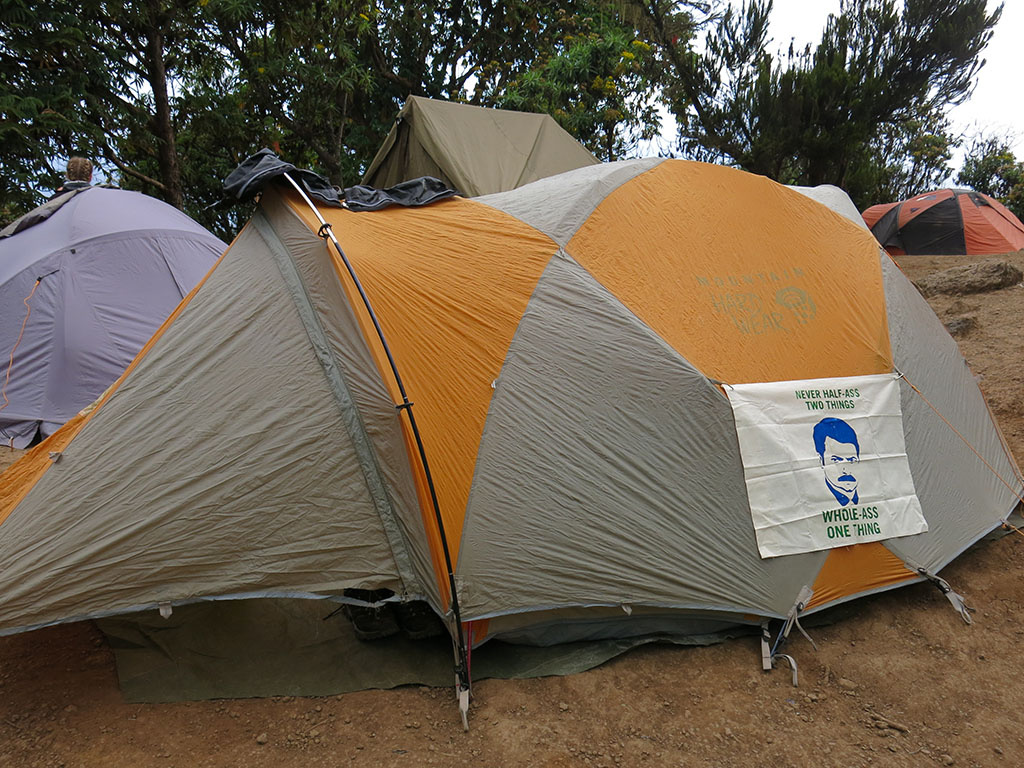 our home away from home 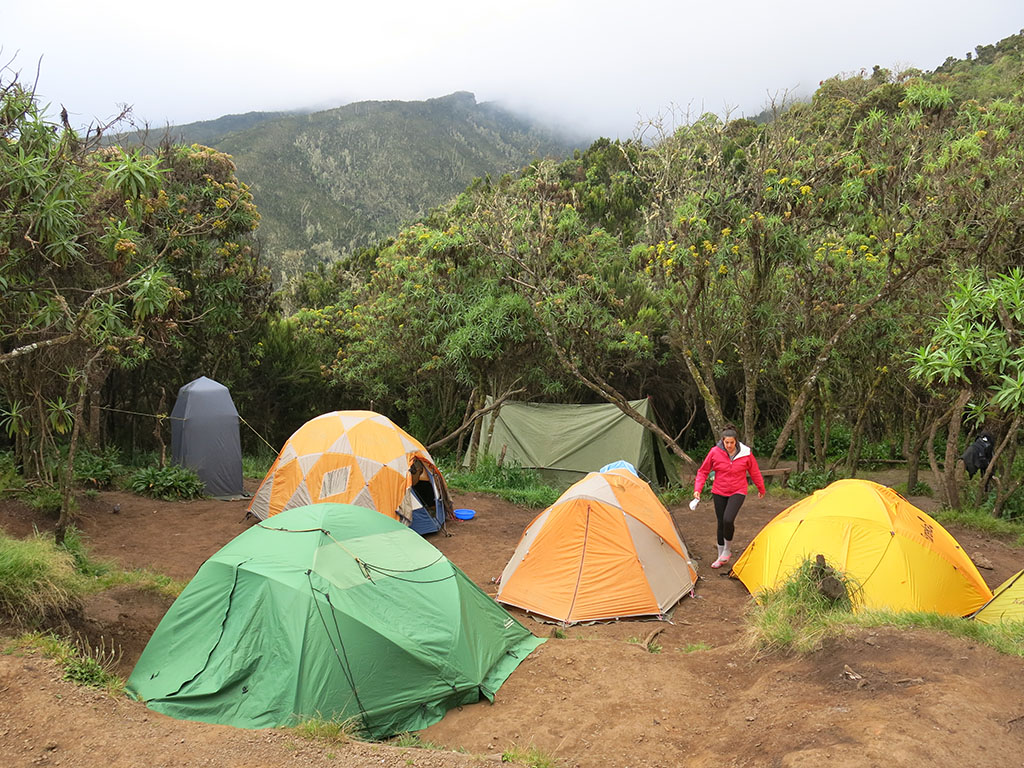 We checked in to camp (as we had to do for every camp we visited) and awaiting for us was our sleeping tent as well as a large mess tent (that would also double for sleeping quarters for much of the crew). We had only settled in for 5 minutes when Christopher, our waiter (yes, waiter), greeted us with a friendly welcome and warm bowls of water to freshen up. No sooner had we done that than we had our choice of hot drink. Milo! Yes! and Popcorn! Now this was getting crazy.

CC and I had a little rest for a bit, although we were both feeling a-ok. We had no idea how we would pull up or how our bodies would go, but so far so good.

Dinner was at 7pm and we had the first of our amazing 2-3 courses dinners. Tomato and ginger soup kicked it all off which was delicious, and then it was fresh fish and rice. What? Weren’t we on the side of a mountain?! Little did we know this was just the start of a gourmet hike.

Even though we both felt good, all we really wanted to do was rest. It was dark and the cold had come in, so there wasn’t too much to do but rest (not a bad thing). By 8:30pm it was lights out, resting for our next day, and probably first serious day of climbing.