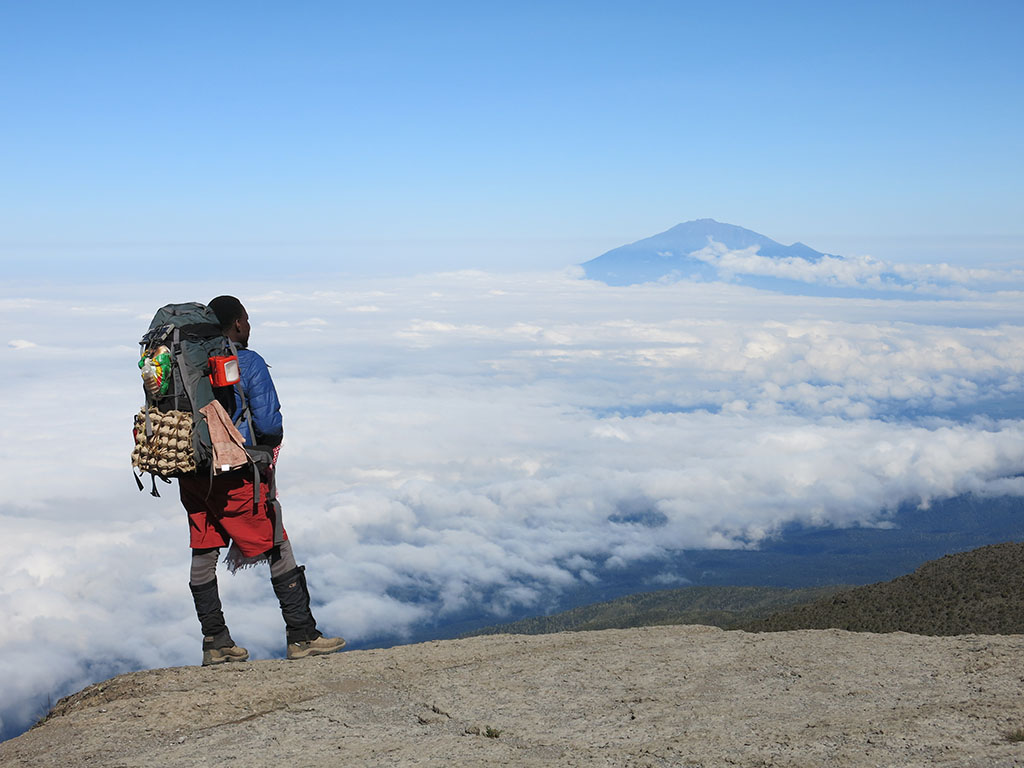 6:30am again, and another beautiful morning. Cold again, but last night I layered up a bit to keep warm so slept nice and warm. I did wake every hour, but given I was asleep at 7:30pm, it is no surprise that by 5:30am I was ready to go.

Another hearty breakfast of porridge, toast, eggs and fruit. Sadly no coffee though, as the Arfricafe had run out. Aaarrgghh!

Before heading off for the day I caught up with Tony and Filipe to let them know about our change of itinerary to the new double header. Seems as though their itinerary was not as conservative as our original one and that they had always planned to have these two short days joined. Yes! It meant that our new buds would be with us the entire journey.

At 8am CC and I were the first ones out of the camp. Off we headed up the Barranco wall. Damn. This was much different to anything so far… it was very much clambering up rocks, looking for good grips and foot holds. Lucky we did that rock climbing session before we left! There was even a “hug the rock” moment to try and get around one part. Thankfully heights and precarious ledges don’t worry me, so this was actually really fun. 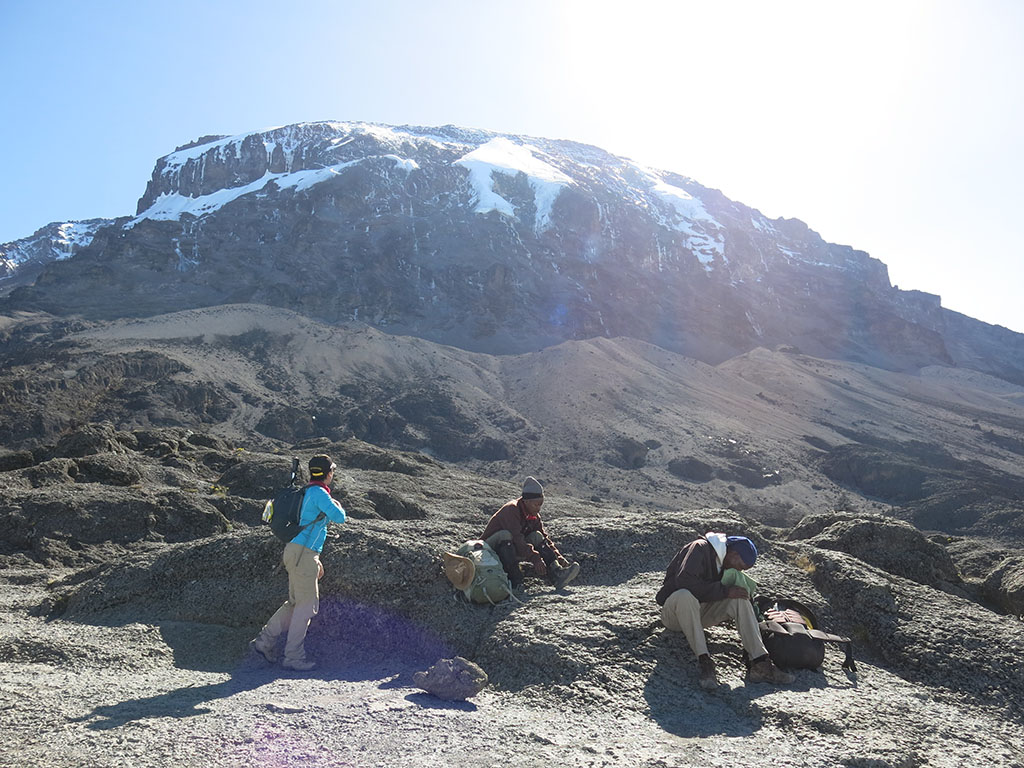 on our way to the top of the wall 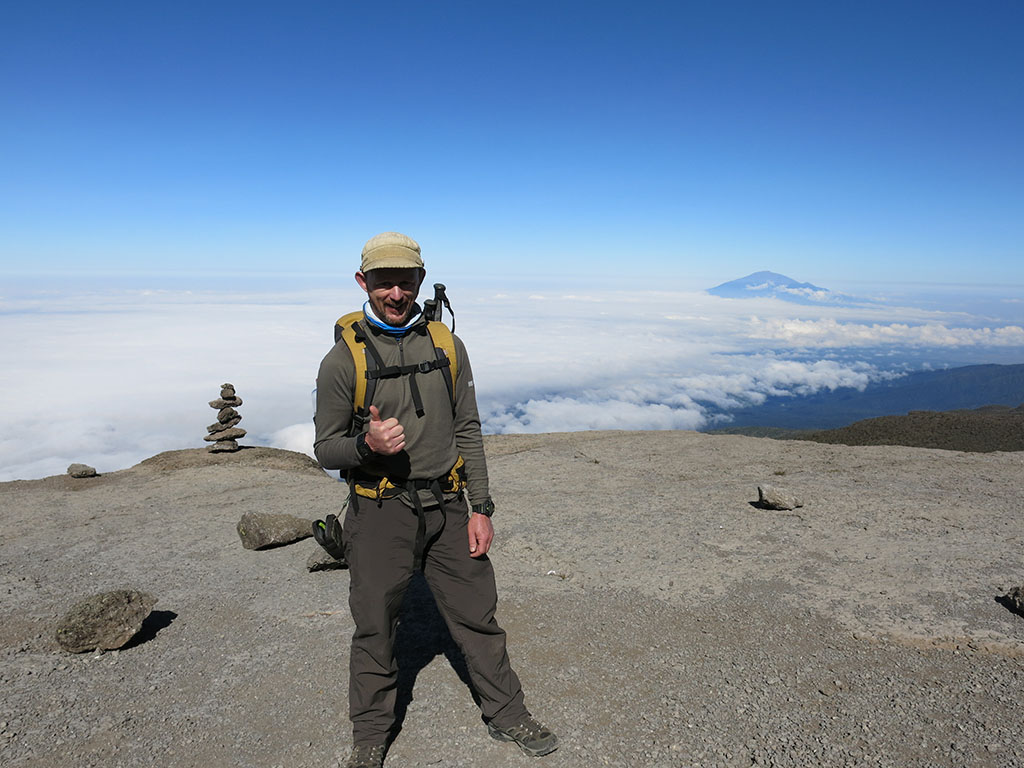 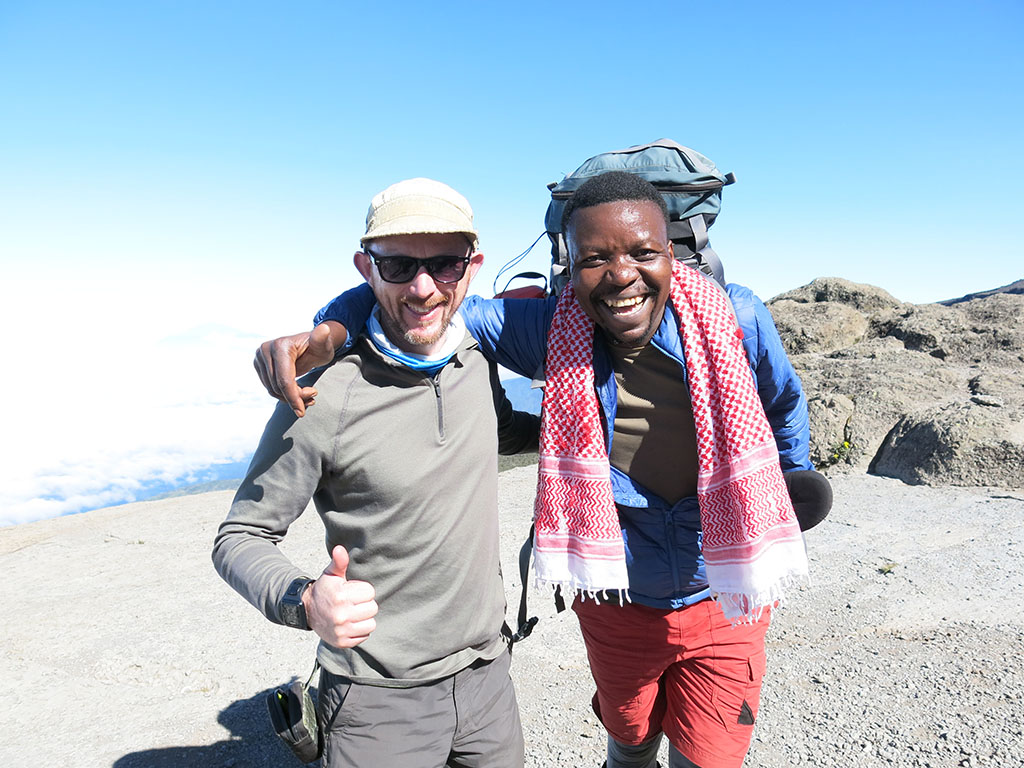 both happy to be up the top 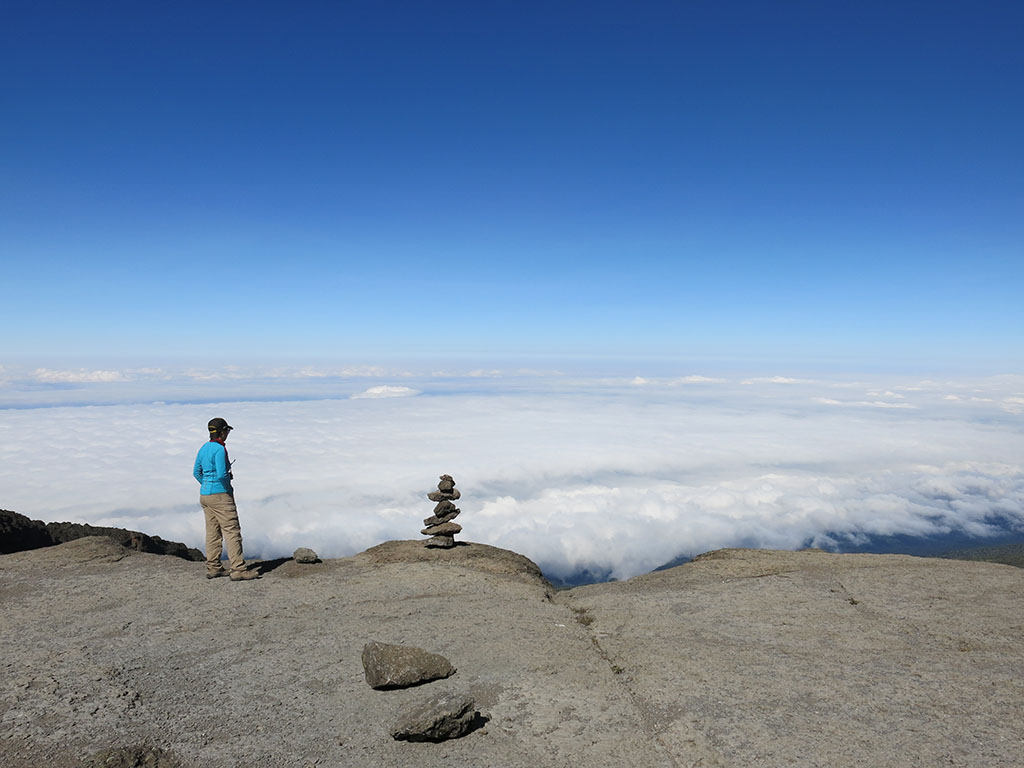 cc did a lot of thinking this trip… thinking “why on earth did i do this with matt?” 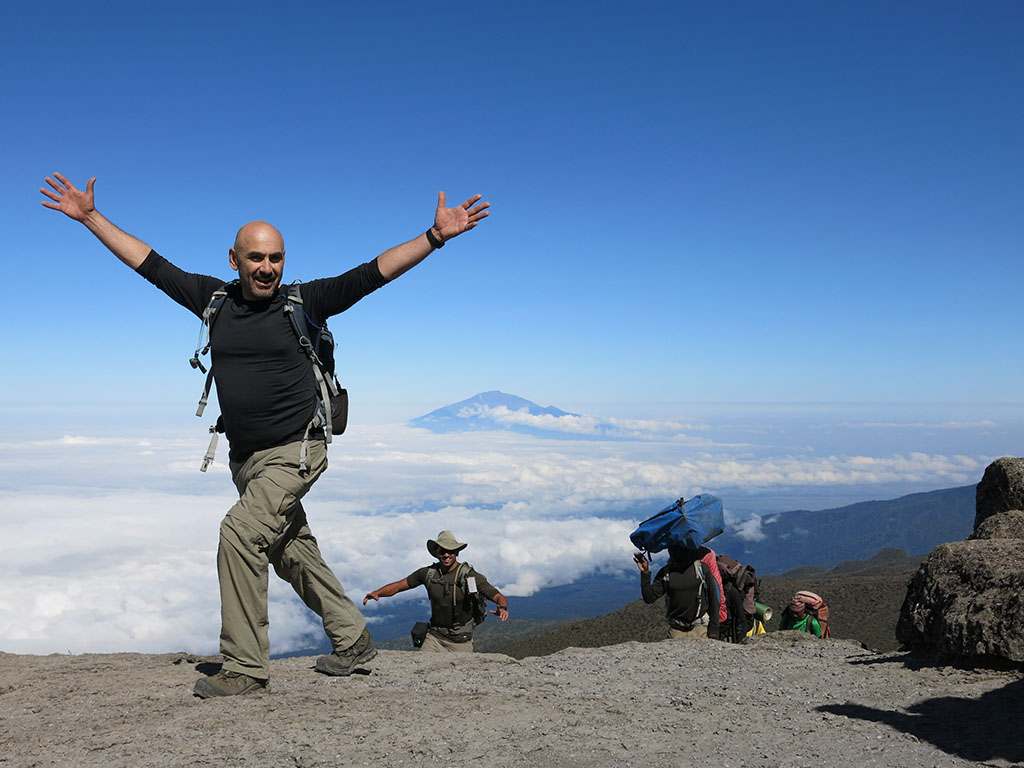 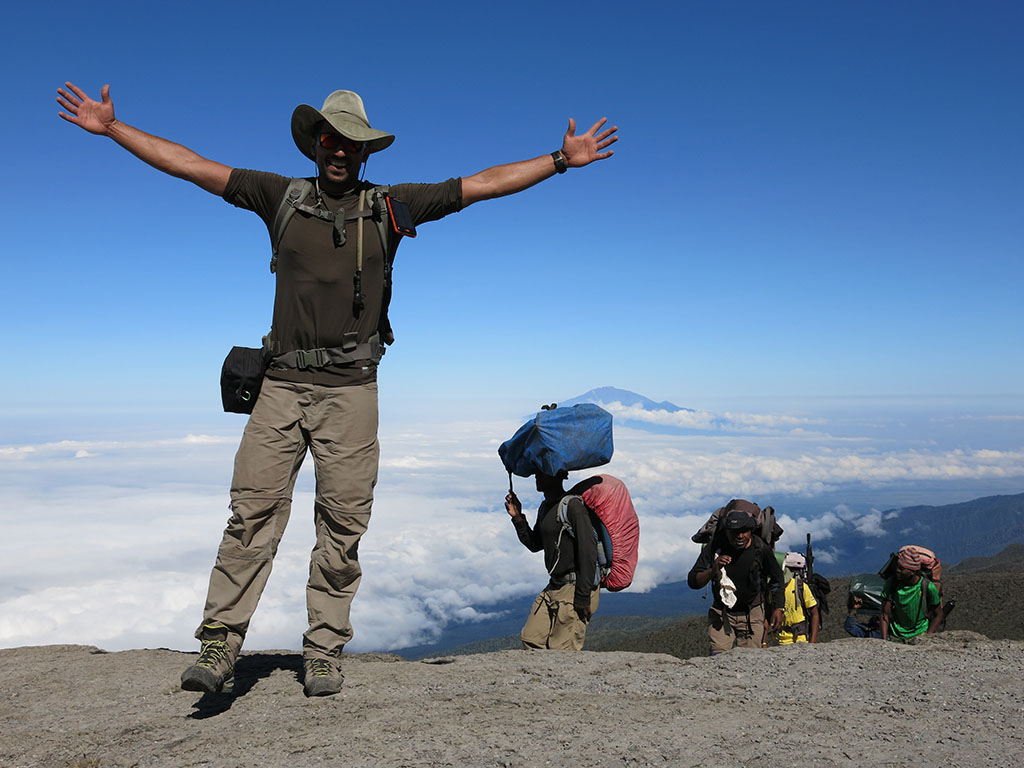 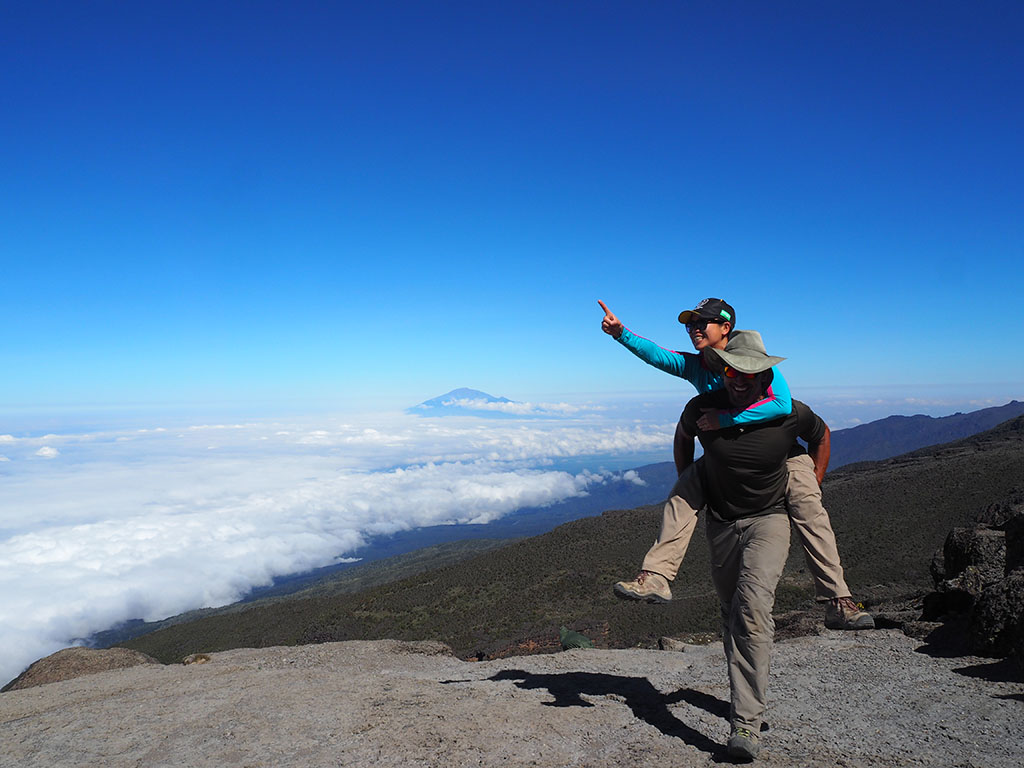 this is how cc did most the hike actually

We actually sat up there for a good 30 minutes, greeting all the other hikers as they arrived. That was an absolute joy and a massive highlight of the hike so far. 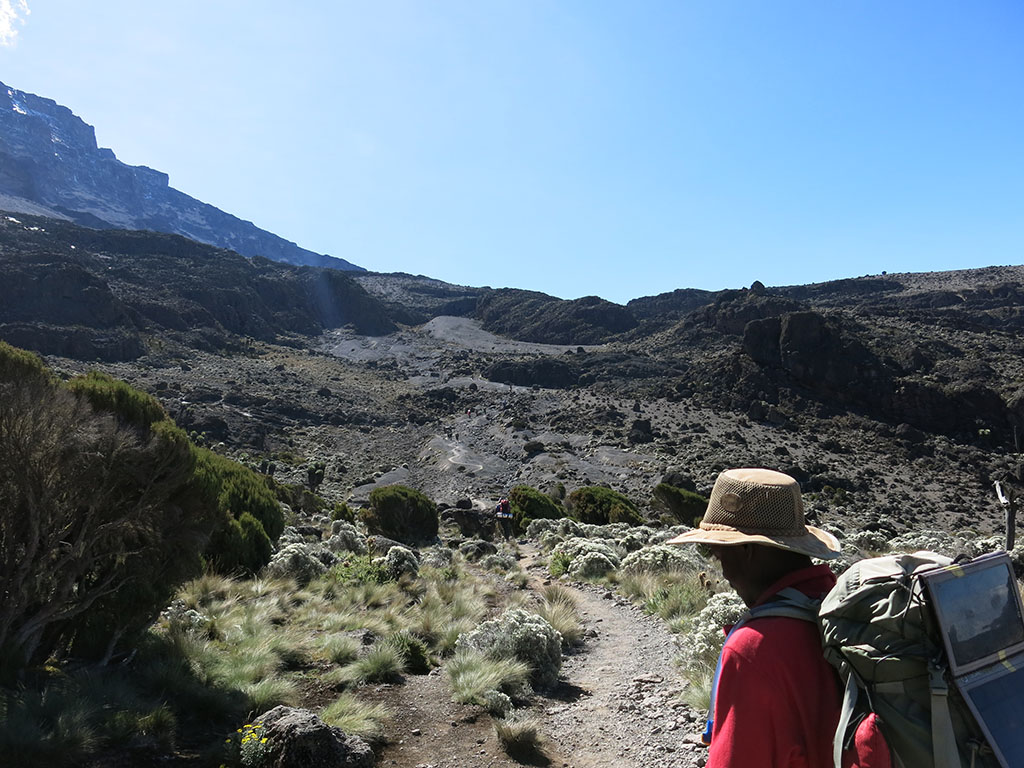 The rest of the morning was ups and downs, with quite a bit more rock clambering. Just on midday we reached what was originally to be our stop for the day, Karanga Camp, sitting at about 4100m. We could see how under normal circumstances it might be a good idea… slightly higher than the previous day to get our bodies used to it. But CC and I had bounced back from our slight headaches yesterday to be feeling good and happy to keep going. 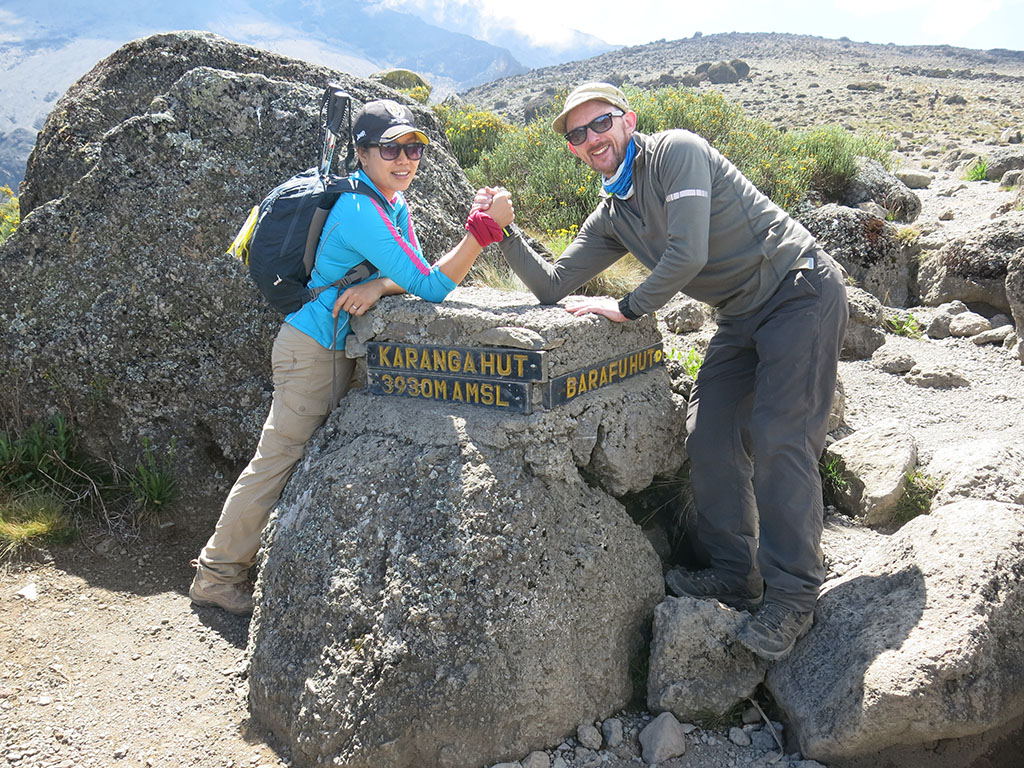 at karanga hut (only halfway for today)

Rashili hooked us up with another epic lunch… tomoato and ginger soup, “cheese burgers” (variations of) and sausage + pepper calzones. Yep! It was nuts. And delicious! I smashed down all the lunch, being pretty hungry.

At about 1pm it was time to keep moving. We were feeling good, but in reality didn’t quite realise what we were in for. The first hour or so was a very slow climb up. In one hour we covered about 800m. It was pretty rough… pole pole (i.e. slowly slowly) and we made it to the top. We then descended again down and across a flattish path through the valley. no sooner had we zipped through that, we were greeted with another big climb up. Phew. This was part path and part rock clambering.We took this very slowly, especially as CC was starting to feel some minor altitude effects again as we rose over 4500m. 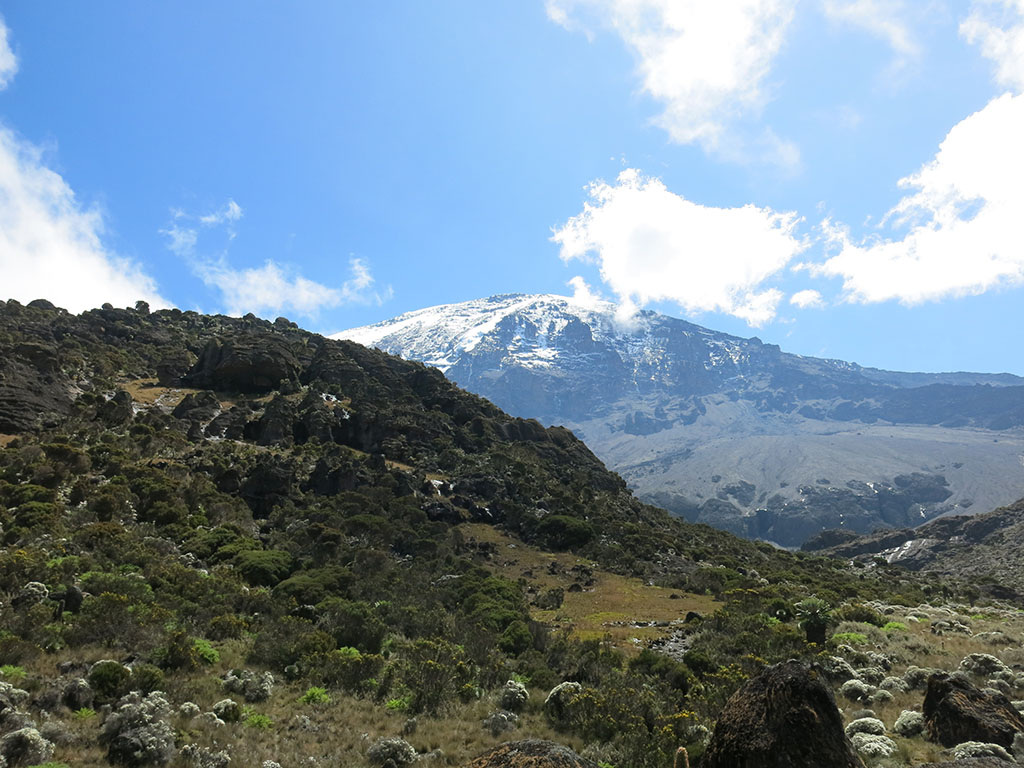 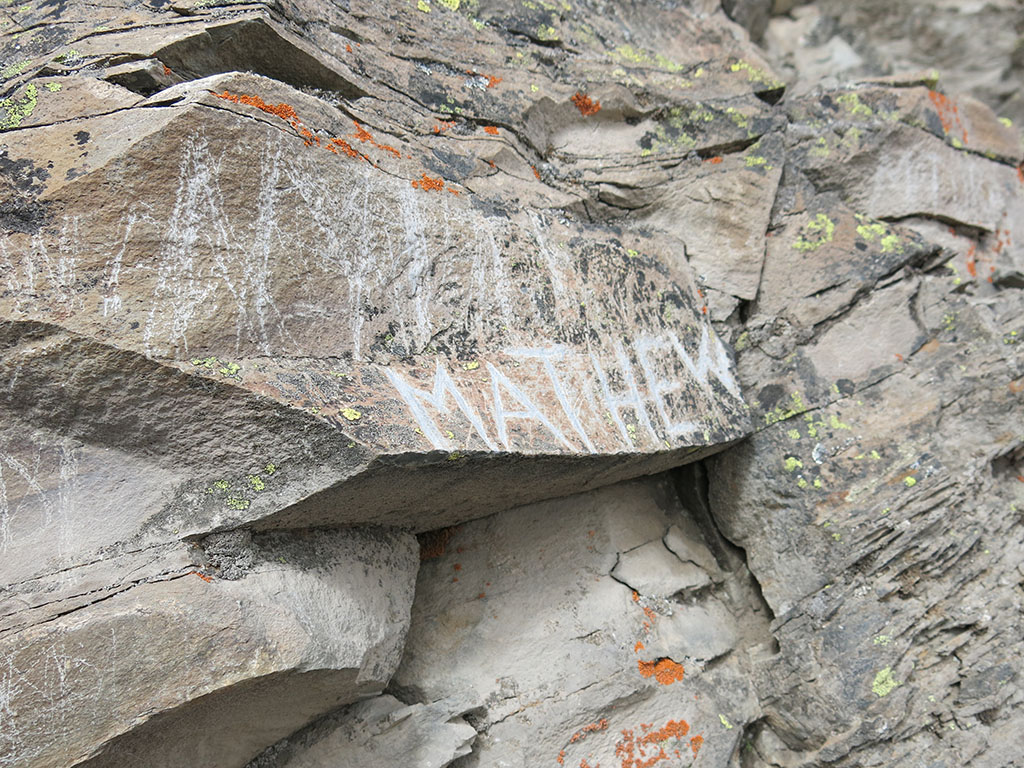 apparently i had been here before 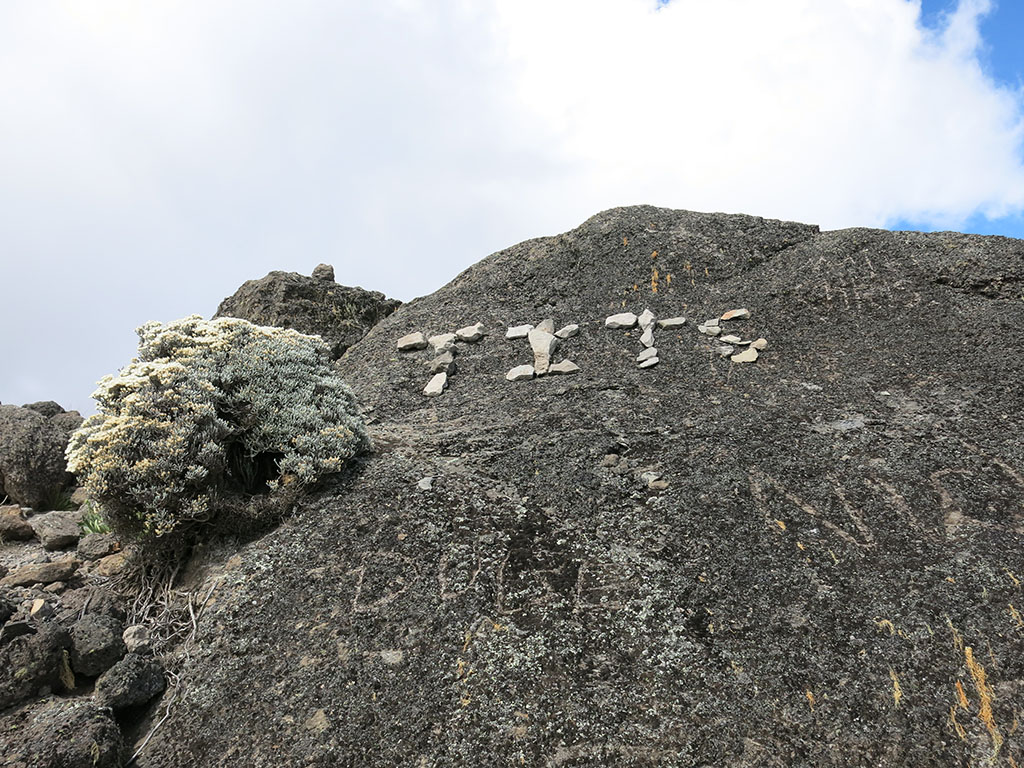 We hit the top of the ridge! Yay! From there though we continued to climb ever so gradually up. What seemed close was in some ways anything but. Bu eventually we reached Barafu Camp just on 4pm. Woot! 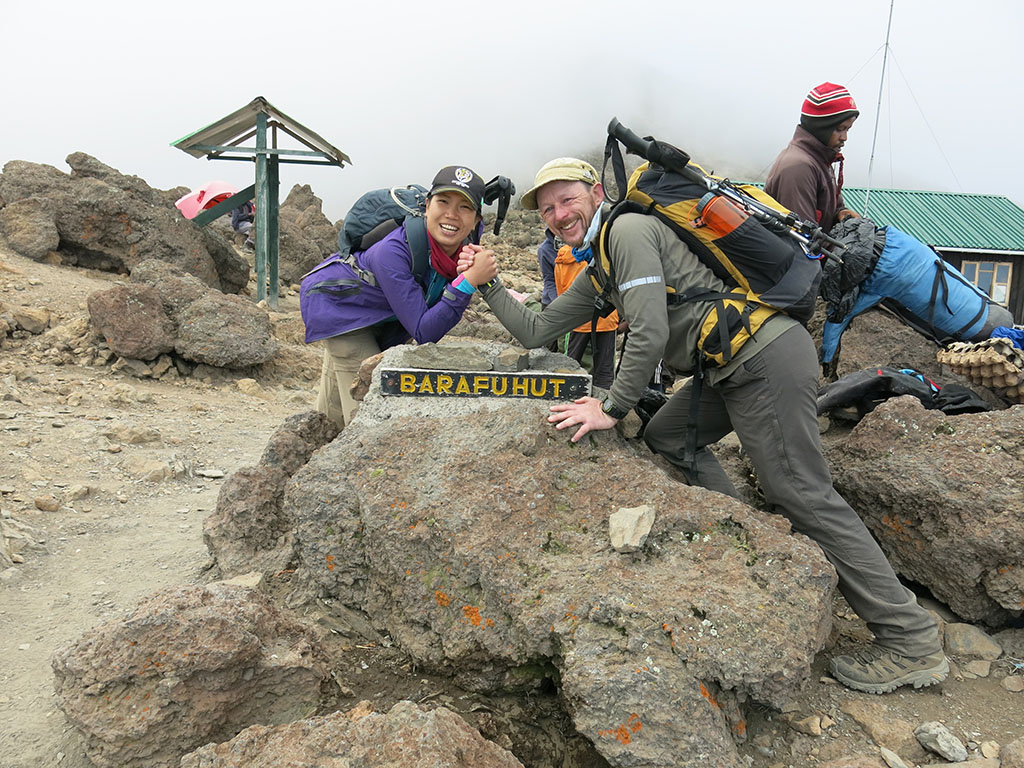 barafu camp! base camp! level UP!

This was also our official base camp, as tomorrow would be summit day. Yowsers! CC went off to have some rest while I tried to stay active and get used to the altitude a bit more. I went and said hey to our US friends Tony and Filipe and it seemed we were all knackered.

What was mind blowing was that there were still climbers coming down from the summit this late in the day. What?! They still had to cover another 1600m of altitude to get to their camp for the night! Hopefully that would not be us tomorrow. I was very thankful not to be feeling any altitude sickness, but I certainly was not counting my chickens just yet… there was still a good 1300m of altitude to deal with to get to the summit. In precaution, both CC and I took a diamox tablet to help with the altitude sickness on the advice of Mhina. While I was doing OK, I trusted his judgement. And better safe than sorry! 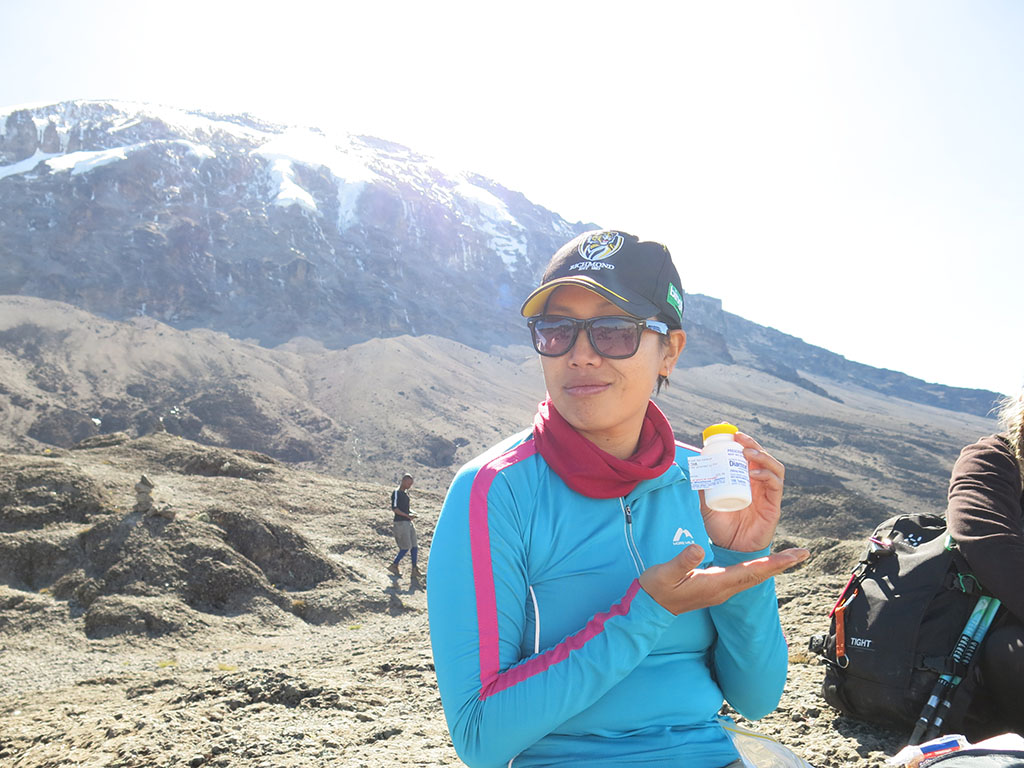 these last two days, bought to you by diamox

Tonight was a tough one, as we had dinner very early so that we could try and get some sleep before the big push to the top. Rashili loaded us up with spaghetti bolognese to get us ready. However neither CC nor I were up for eating too much… rather we just wanted to try and get some rest before our BIG day.