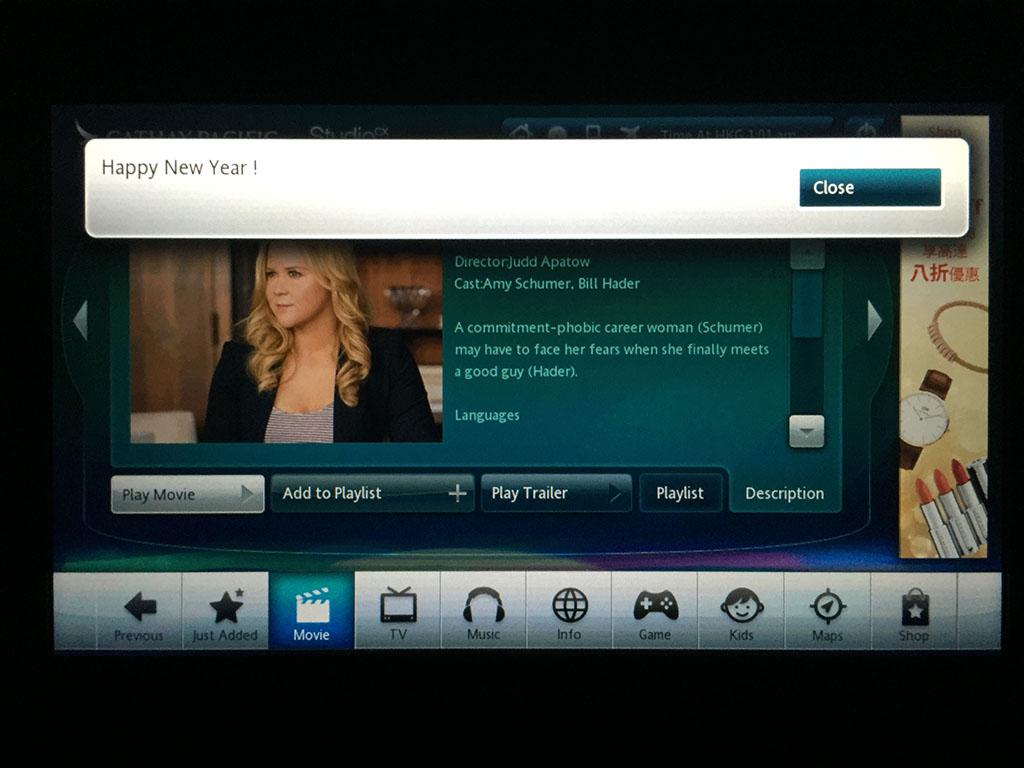 December 31st is usually everyone getting ready for a big night. Us, we were getting ready to head to the airport. I had mentioned that we felt our decision to head home before New Years Eve felt pretty vindicated. We chose the flights almost exclusively based on price (saving $800 each by leaving a couple of days early? Sounds OK to us!), but neither of us really felt the desire to be crushed on the streets of Amsterdam for New Years. I had actually already experienced it 15 years ago, and while it was not terrible, it was not one of my fonder memories of my visits to Europe.

So mid morning it was just on to the bus and off to the airport.

Not much else to report really. An uneventful 24 hours of travel home, just as we like it… catching up on movies (everything from Love & Mercy to Trainwreck to The Assassin to Black Mass), TV (finally finished Mr Robot!), reading (Carrie Brownstein and Kim Gordon autobiogs), and podcasts.

Sadly the New Years celebration was a total non-event. Not that I was expecting or wanting much (we were avoiding it after all), but I thought we may have had something of note happen on the plane to celebrate, but nope. A subtle message on my screen was all that I got when we were officially at New Years. I didn’t expect heaps, but I thought it was pretty weak to not even have an announcement from the captain or the offer of a drink. Disappointing as Cathay Pacific are usually pretty good.

Overall it was a great holiday that I think we planned really well. Having a full week each in just 3 places was a great thing to do… less running around, a bit cruisier, a chance to explore lots in the city and less travelling in general. In hindsight we probably could have done with one more day in Berlin, probably taking the day off Amsterdam. But it was about right.

Taking the train was totally the right choice too. Our experience flying out of Amsterdam was testament to that. Not that we had any troubles, but by the time you get your way to the airport (an hour to get to the bus, wait for a bus, and get to the airport), be early enough to check in (they still say 3hrs before), go through all the security etc, and suddenly our casual wander to the train station in Berlin, step on to a train, and have a relaxed train ride was the right call. When you think that the 6hr train ride from Berlin to Amsterdam might be too long, all you need to do is take 1 hour to get to the airport + 2 hours waiting at the airport + 1 hour in the air + 1 hour to get into the destination city, and you already have almost all that time back. I would totally do it this way in the future.

Paris was one place that people were questioning our decision to still visit after the horrible events just 6 weeks ago. But there was never any doubt we would go. The whole time we were there we felt as safe as usual as we thought would be the case. What we probably weren’t really prepared for was how much security would be ramped up though. It was at all the usual tourist spots, however seemed a bit more thorough… it was essentially airport conditions at each museum and tourist destination. What we didn’t expect was that even going into shopping centres and supermarkets we would undergo security checks… looking in bags and getting us to open up jackets. We got used to it in the end, but when we got to Berlin and things were relaxed again, it really stood out to us how much things had sadly changed in Paris. Sad that for everyday folk things had changed so dramatically.

The other thing to mention might be the weather. We both packed to be in below zero and it proved totally unnecessary. It SHOULD have been below zero, especially in Berlin. But it seemed they were going through a warm dry spell, as we had continued 8-12 degrees, little rain, and sadly no snow. Even talking to locals, Berlin SHOULD have been covered in snow. I was hoping for a white lead up to Christmas, but alas it wasn’t to be. Not complaining though, as we were very lucky with pretty great weather all round.

Hope I didn’t bore you too much with my ramblings! Look forward to seeing y’all in 2016 🙂