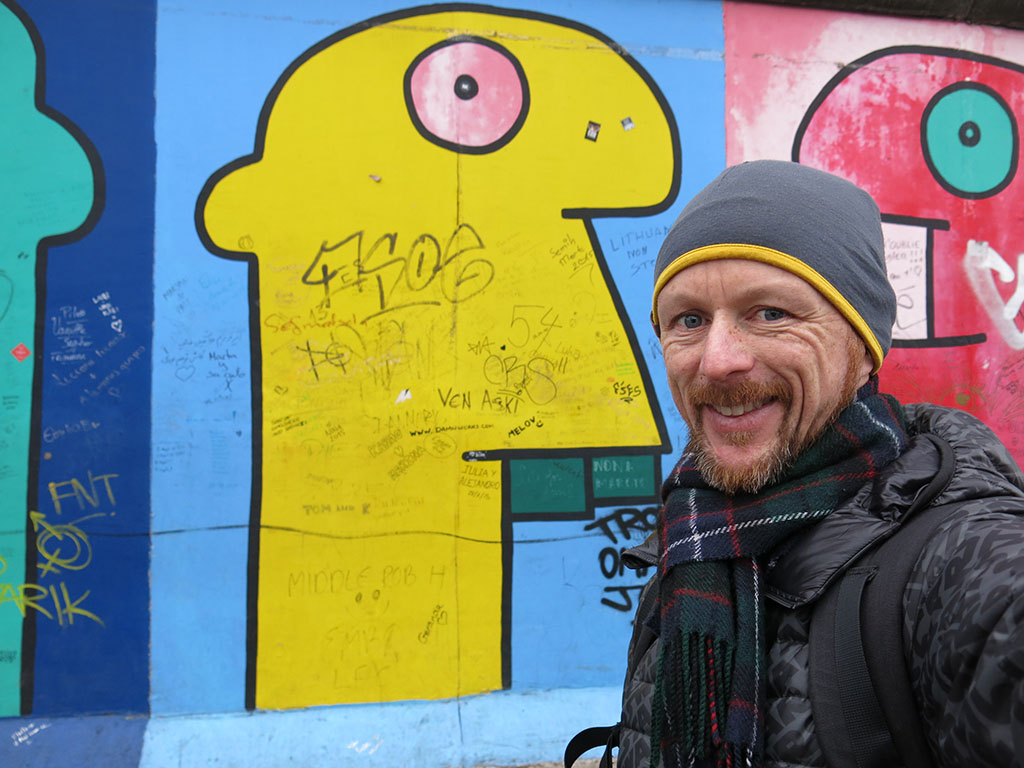 a goofy looking dude… and a painting

Our last day in Berlin… things had flown by so quickly. We felt like we had both been here for ages and only just arrived. So today was a case of filling in some gaps before saying goodbye and heading out of town tomorrow.

My previous post, detailing our cycling trip around the city, hinted at some of the things we were getting up to. Our first destination had been booked before we left since we needed to meet the necessarily security checks and pre-reqs. Yep, it was off to visit the German parliament.

We got to the Reichstag and duly passed through the strict security checks. Outside of dropping off backpacks into lockers at museums, we had had to deal with very little security to speak of our whole time in Berlin. Unlike Paris where we had checks even going into supermarkets, it was nice to be somewhere where we weren’t continually emptying pockets and bags. 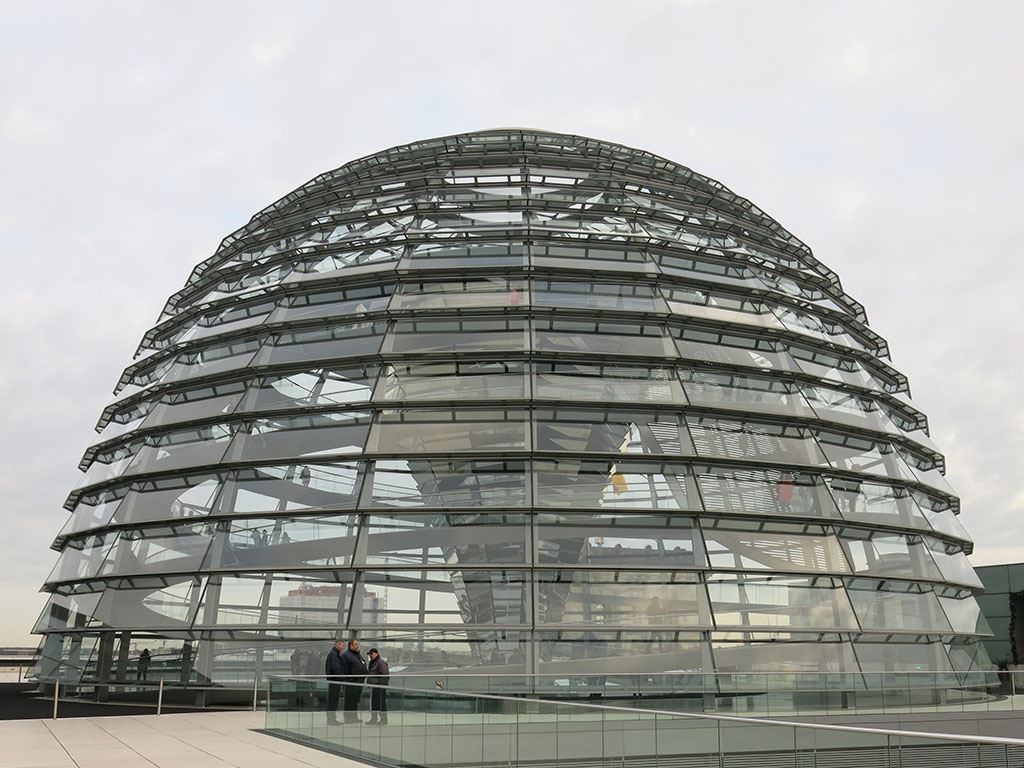 After going through, it was into the building proper. Security was tight as our small group went through one security checkpoint after the next, but eventually we were up in the elevator to the huge glassed dome. 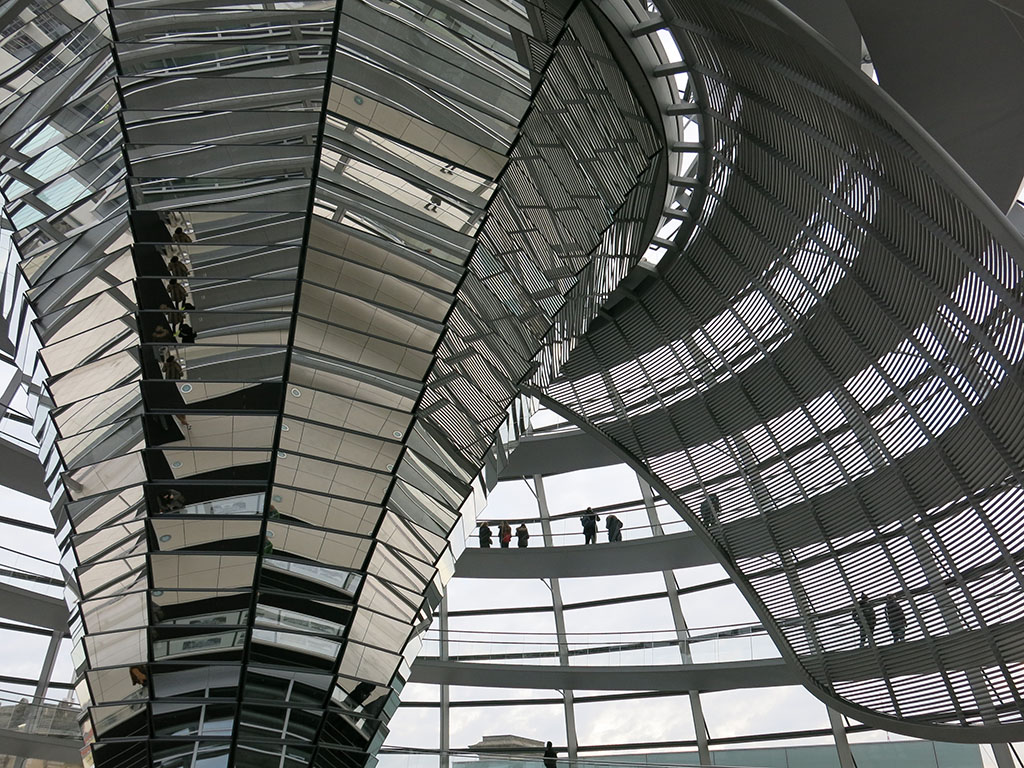 winding our way up

At this point the general public were allowed to wander unaccompanied. With audio guide hand, we wandered about the rooftop and up the screw thread path around the inside of the dome.

The dome offered great views over the Berlin cityscape. The building itself was as much of a focal point as the city views outside. The glass dome, the curling path, the giant sunshade… it was very impressive. At the top was actually a 10m open hole, explaining why the inside of the dome was so chilly. Apparently when it rains and snows it all funnels down through a chute and conveniently out of sight. 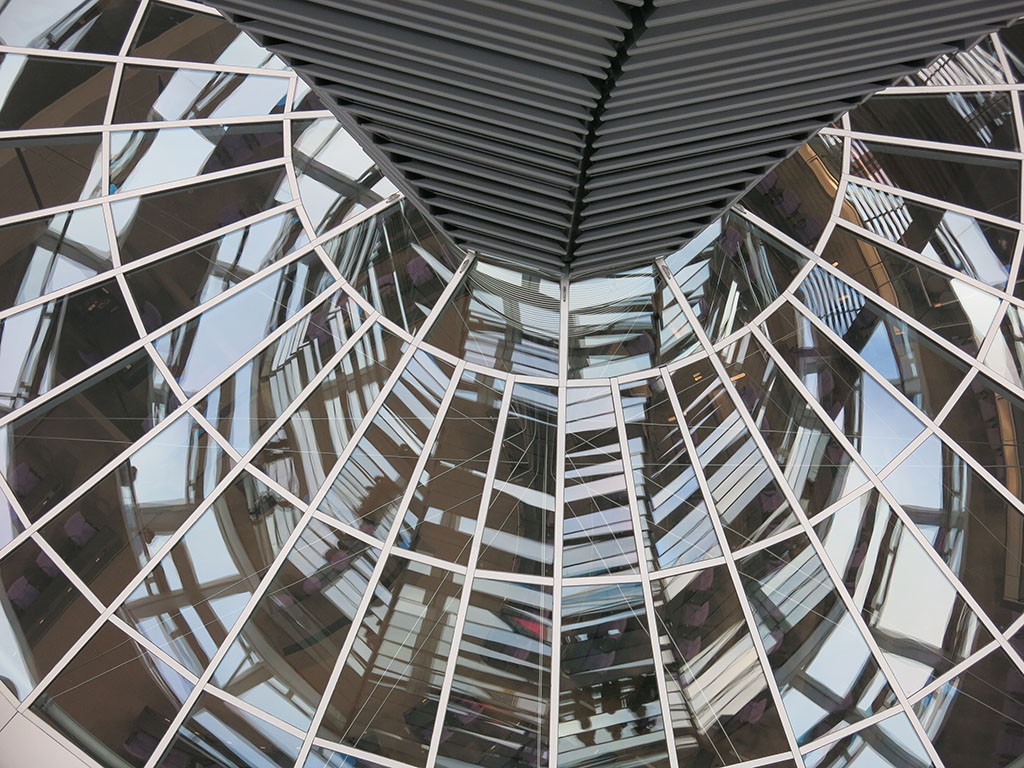 From the top you could peer all the way down and see into the actual rooms of parliament. The whole thing is designed to get maximum natural sunlight into the room, and even has the giant sunshade if it is a bit bright. Pretty clever! By that point it had been an hour or so,  so it was time to wander back down, keep moving and move on to more Berlin. 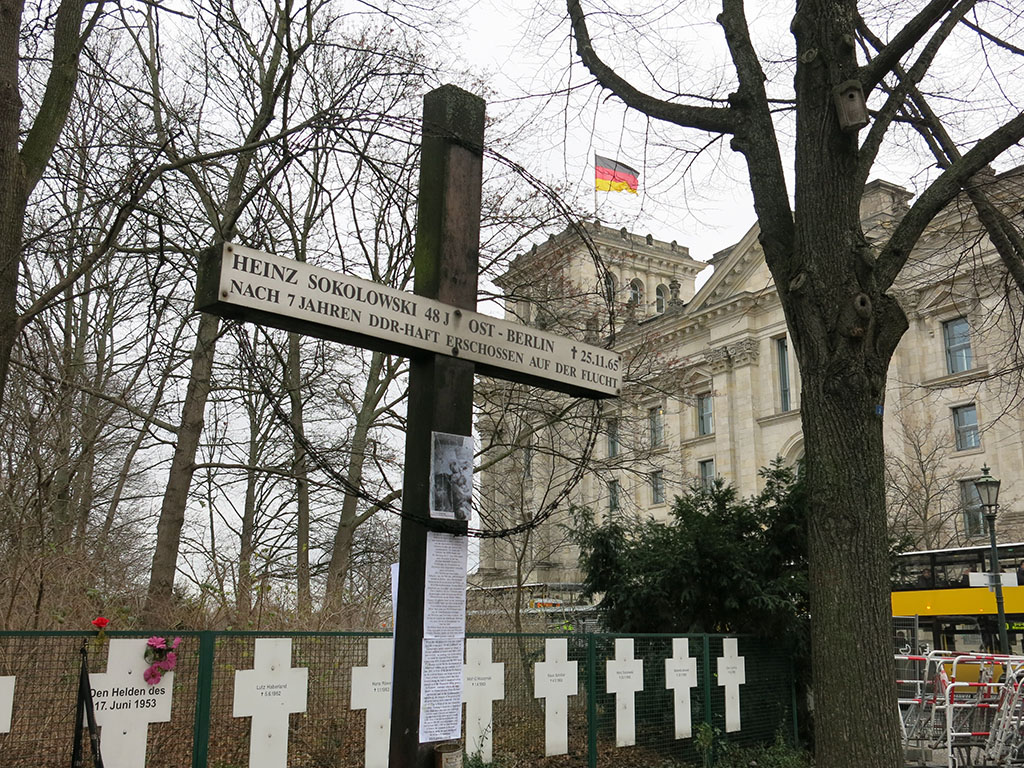 another of the many memorials

Our next destination was the Jewish memorial we had visited yesterday. On our way we passed a memorial to some that had fallen during the days of the wall and in attempts to escape the east. As Kate remarked on seeing the flowers that these people would be the parents, uncles and aunts, or people that continue to live in Berlin. So surreal to think about how recent it all really is. 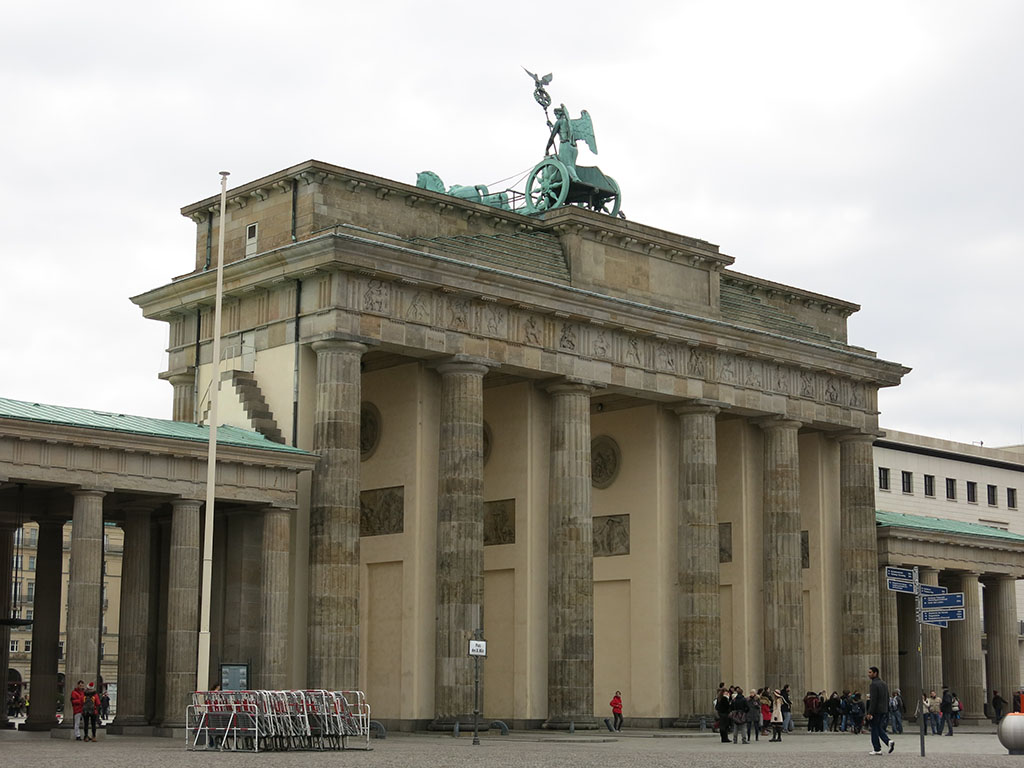 the less photographed side of the Brandenburg Gate 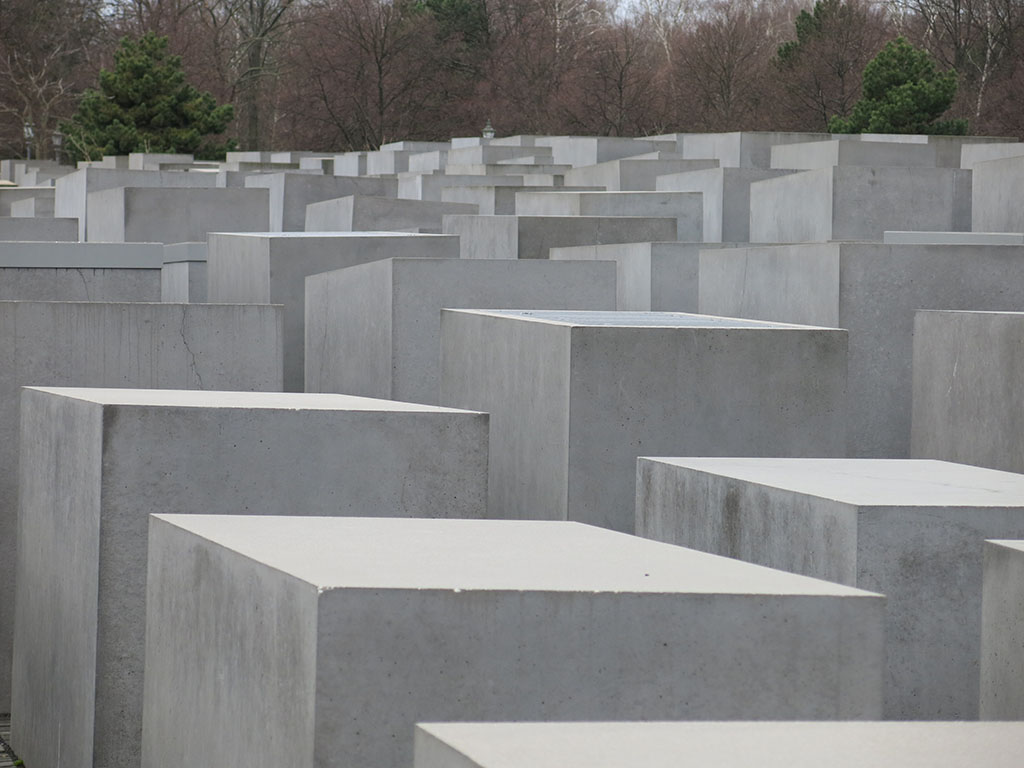 as haunting as ever

Back past the Brandenburg Gate one last time and we were at the memorial. We spent a bit more time to just soak it all up and wander through the concrete blocks. At every angle it appeared different. It really is a great memorial as also shown by the many people wandering about.

Rather than go into the attached museum, we decided to keep walking and head to the one last museum we had on our list, the Topographies of Terror. We were not expecting a good time, but it was one we wanted to visit. 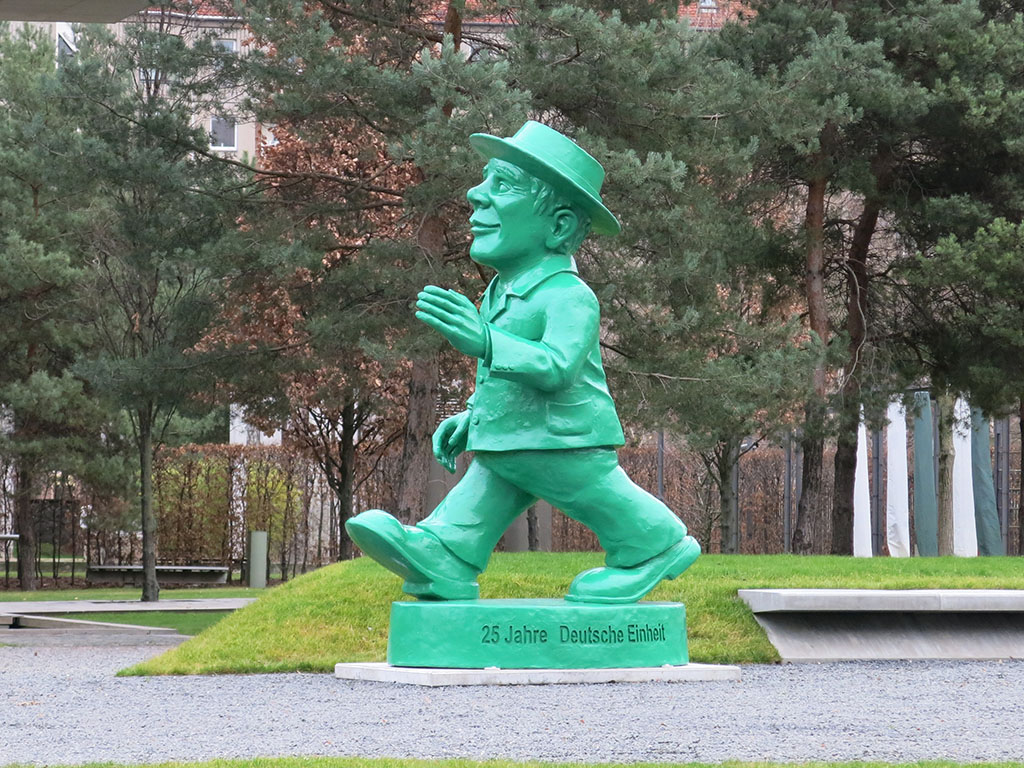 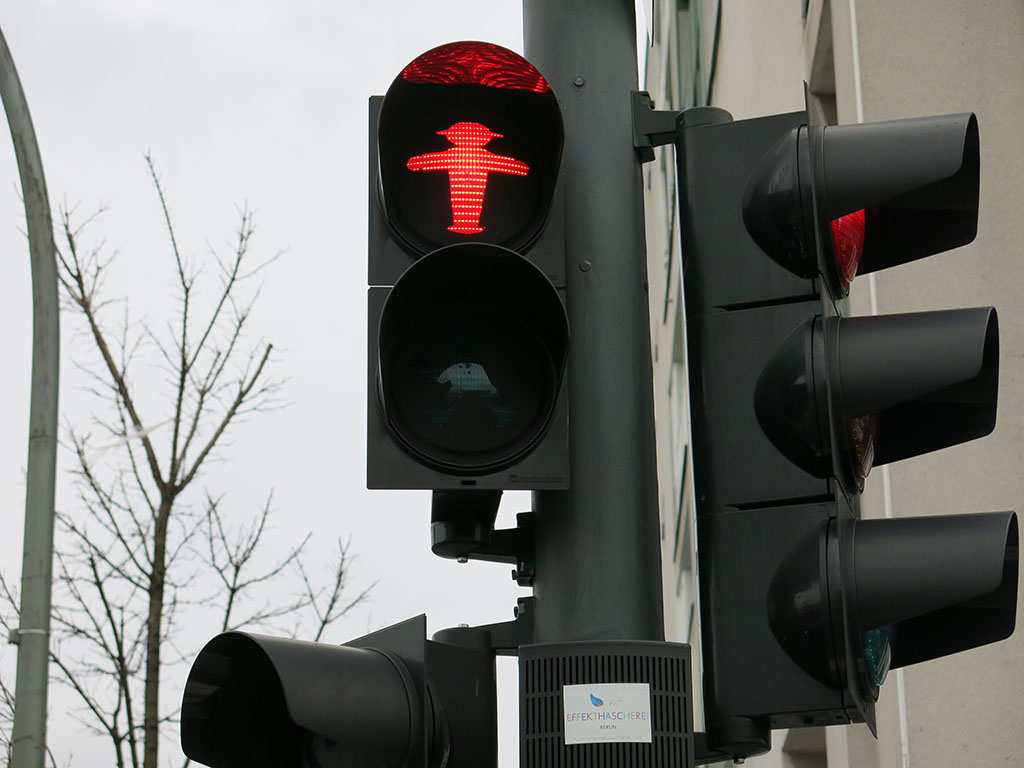 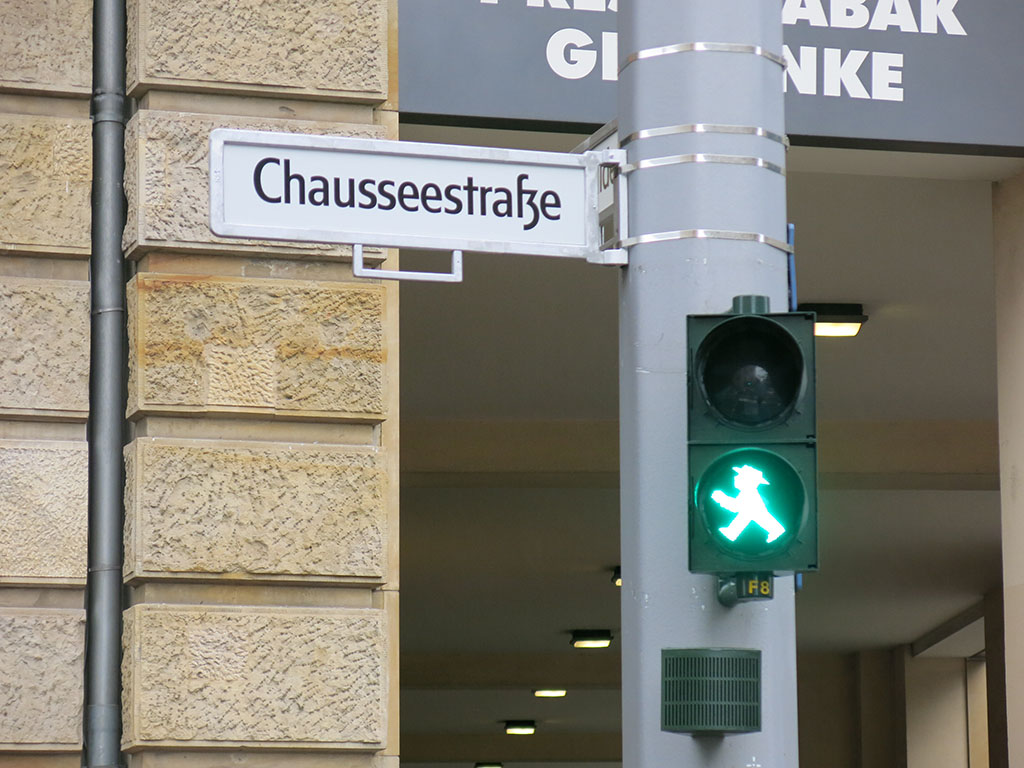 On our way we saw a big Ampelmann in a small park. Who is Ampelmann I hear you ask? He is the ubiquitous red and green man that greets you at every set of traffic lights in Berlin. I did a quick bit of reading and it turns out that he is a beloved remnant of East Germany… so much so that when they started changing the crossing sign to a more traditional figure in the early 2000’s, public outcry was such that they returned Ampelmann to his former glory. Every now and then we would see an older set of traffic lights with a more typical red and green signal, but in most cases our cue to cross the street was the green silhouette of Ampelmann. So we wouldn’t miss him to much we got some magnets to adorn our fridge from a nearby store. 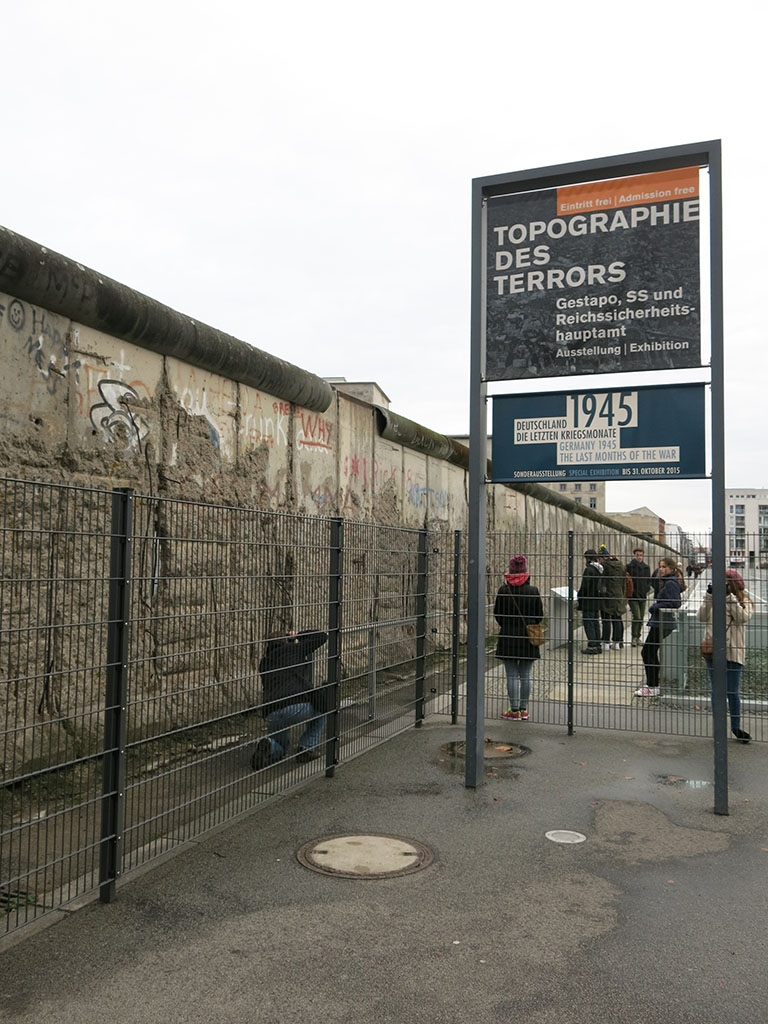 home of the terrors 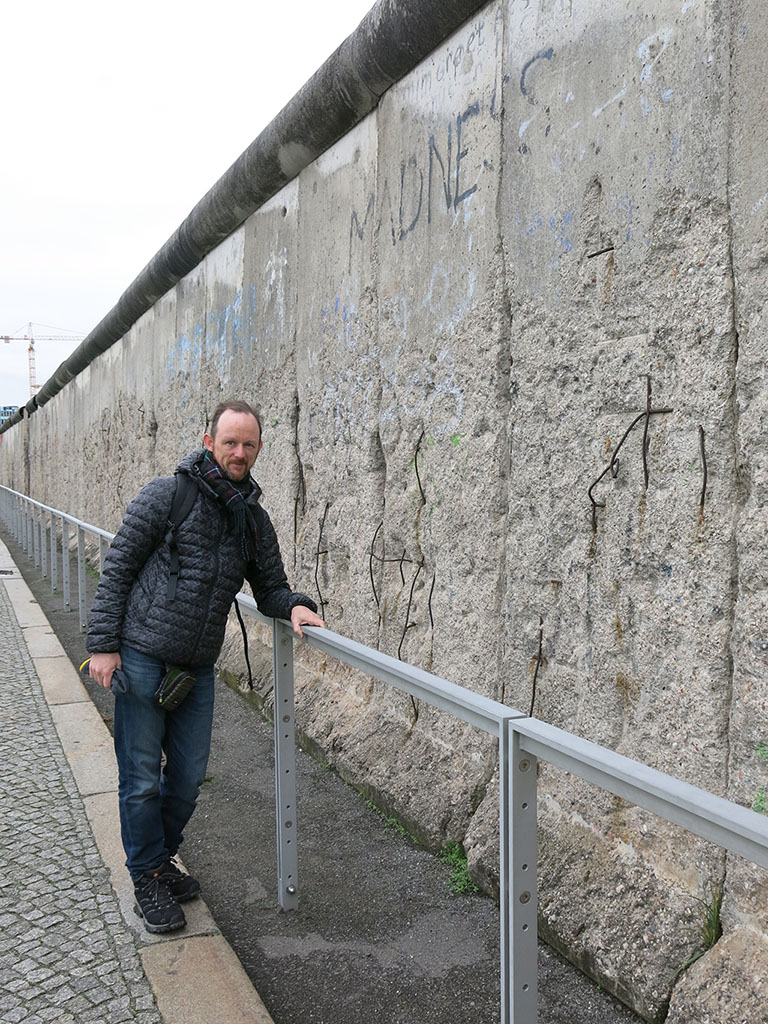 In no time we reached the museum. As mentioned yesterday it was on the site of the former Gestapo and part of the wall, and detailed the horrors of the early to mid parts of the 20th century. In full detail, and with many many photos and documents, it described the rise to power of the Hitler and the atrocities. It was hard work. Amazingly important it must be said, but every now and then you would see a heartbreaking or gut punching photo that made it all hit home.

It was mid afternoon and Kate was flagging. A busy week was taking its toll. I only had one more place I wanted to visit before we left, the most famous part of the wall still standing. So back on to the S-Bahn, and off to Ostbahnhopf station to visit the East Side Gallery. 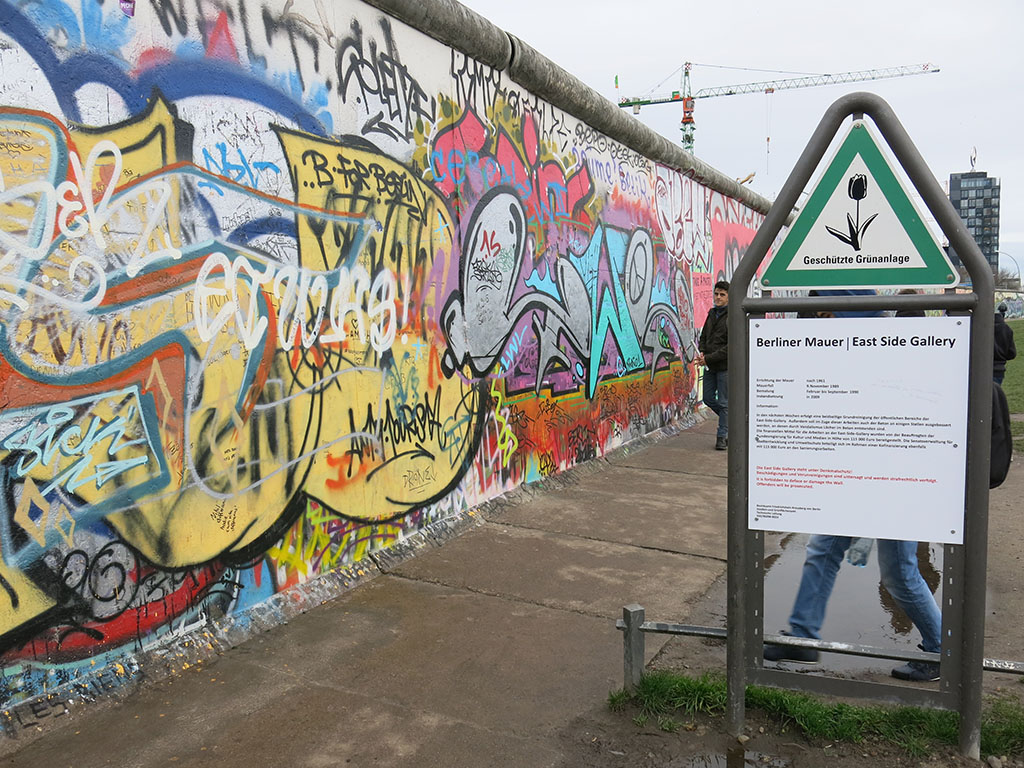 welcome to the east side gallery

The East Side Gallery is a 2km stretch of the wall that has been turned in to a perpetual gallery of street art. Both side of the wall are covered in colourful paint. One side is much more of a free-for-all, that seems to be graffiti’ed by people on a regular occasion. The other side appear to be a more regulated side, with fencing covering part of it and more “legitimate” works done. 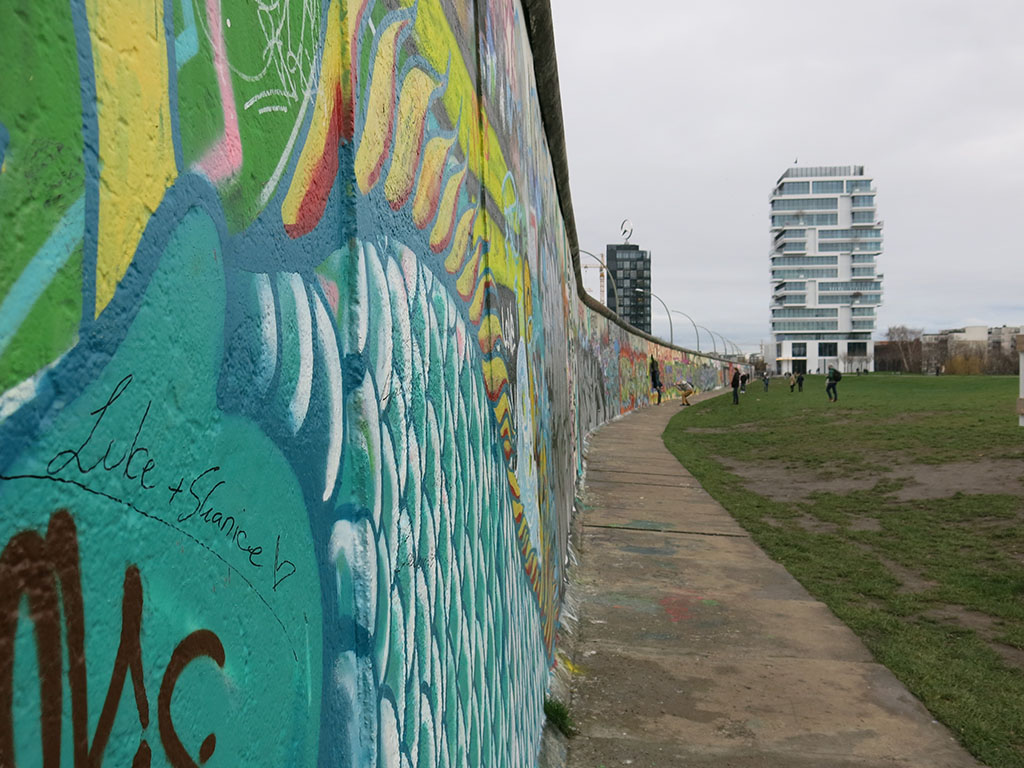 the less interesting, but not fenced off, graffiti covered side

Strolling along checking out the works, it was interesting to see what was adorning the wall. In many respects it was not as amazing as I expected, given the amount of people that visit and how (in)famous it now is. Two main works stood out among them all.

The first was the faces of Thierry Noir, that I wrote about on our first day. A dozen bright faces covered one early stretch of the wall and for me were easily the highlight. They were bright and distinct and really gave it some character. 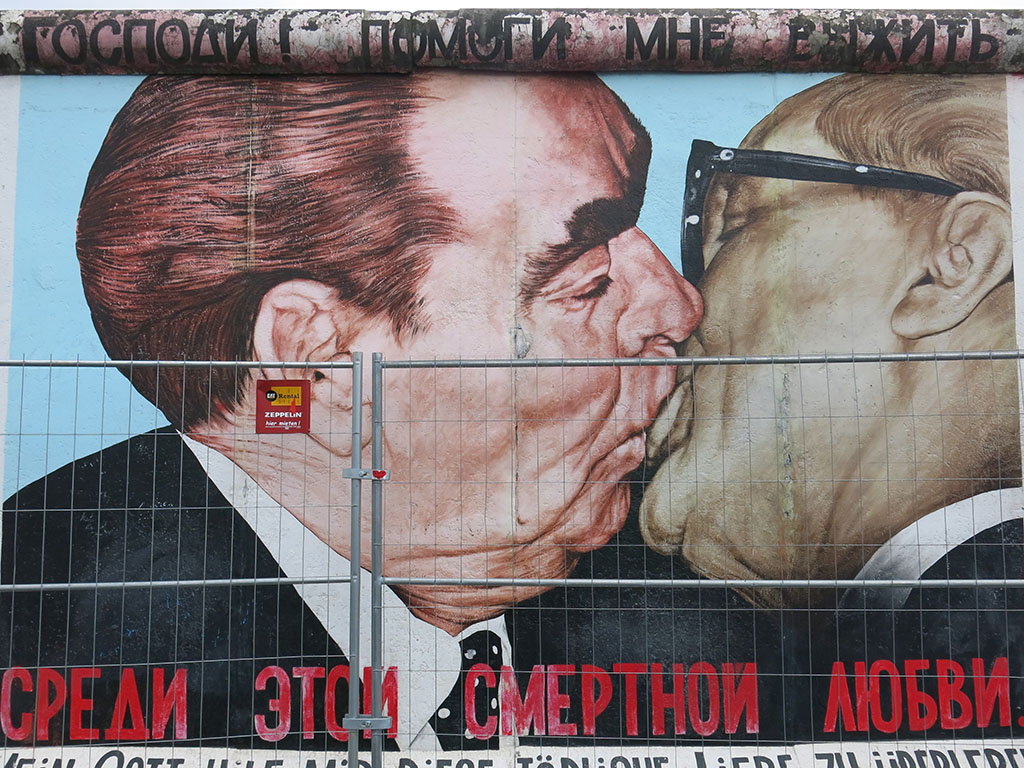 The other artwork is one that you also see advertised around Berlin, a great representation of a famous photo showing Brezhnev and Honecker in a warmer than usual greeting. When you see the original photos it is crazy to see that the painting is not really an exaggeration at all! It was easily the best piece on the wall.

The rest were fairly generic pieces of street art that were OK, but not too awe-inspiring. Great to see, and especially to see more of the wall, but I would love to see a more curated aspect to the “gallery”.

The sun was setting as I got back to the hotel. Kate was well rested so given we had a big day of travelling the next day we opted for one more quick trip out to finish they day ice and early. What did we do? Dinner at a Christmas market obviously! 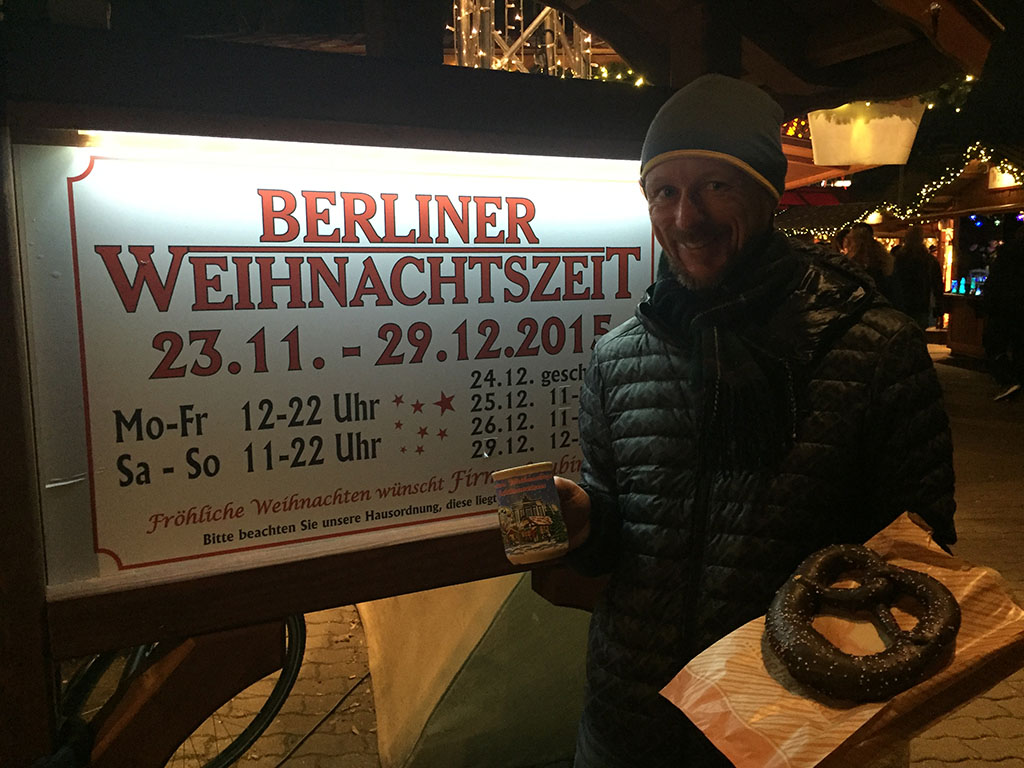 We went back to a market at Alexanderplatz that we had not really visited properly. I couldn’t help but finish my visit to Berlin with a Bratwurst, a Gluhwein, and a chocolate pretzel as big as my head.