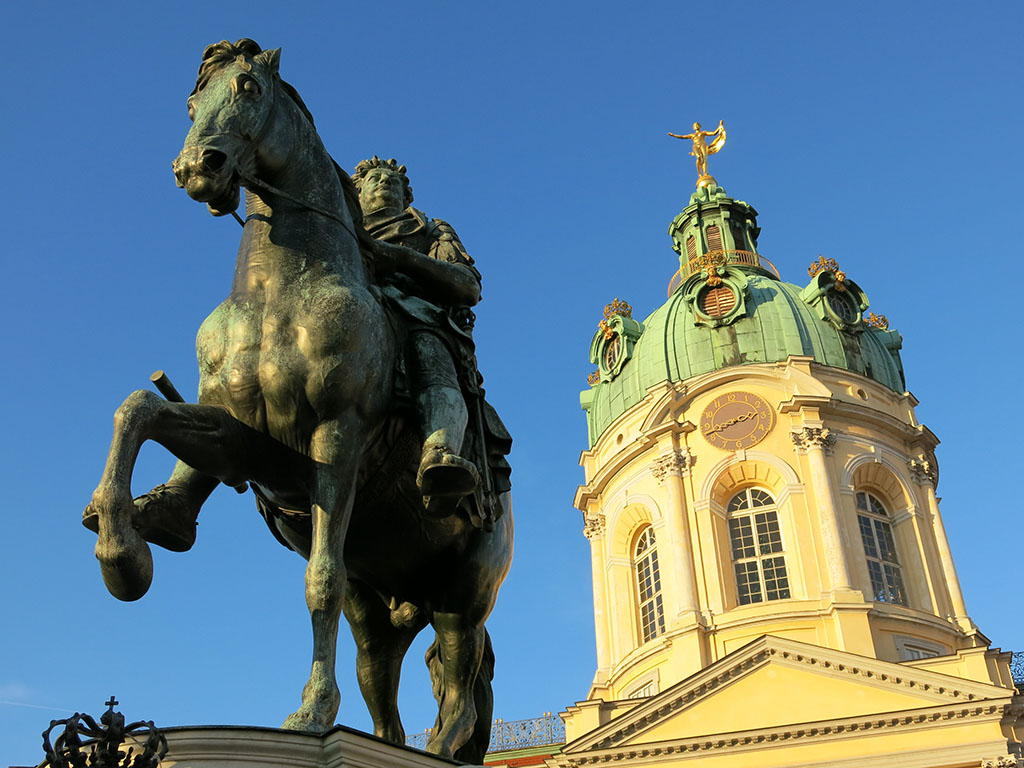 While we had heaps that we wanted to do in Berlin in our week here, we didn’t feel we needed to be out the door every morning super early. So this morning it was after 10am before we decided to get out and explore some more. So I grabbed a pretzel from the cafe and off we went.

We were playing today on the fly, with our first destination a store in the Berlin suburbs that specialised in figurines, in particular military and Christmas ornaments. Kate was up for some Christmas shopping!

What we found was a very cool small store with a lovely guy running it who was keen to help. While their main focus was on small metal hand painted military figurines (or which there much have been thousands), Kate was mostly there for the metal Christmas ornaments. They were the ones she knew she wanted and while we had found some at the Christmas markets, had done her research to find where we could check out a bigger selection.

Kate was loving it and hating it all at one. Loving the ornaments which were exactly what she wanted… hating it because she had to decide. I thought it was funny as she was just like me when trying to decide what to order for dinner… paralysed by choice. In the end she didn’t go overboard… buying us a few as well as some gifts. They were very cool and would be a great reminder of our trip to Berlin. 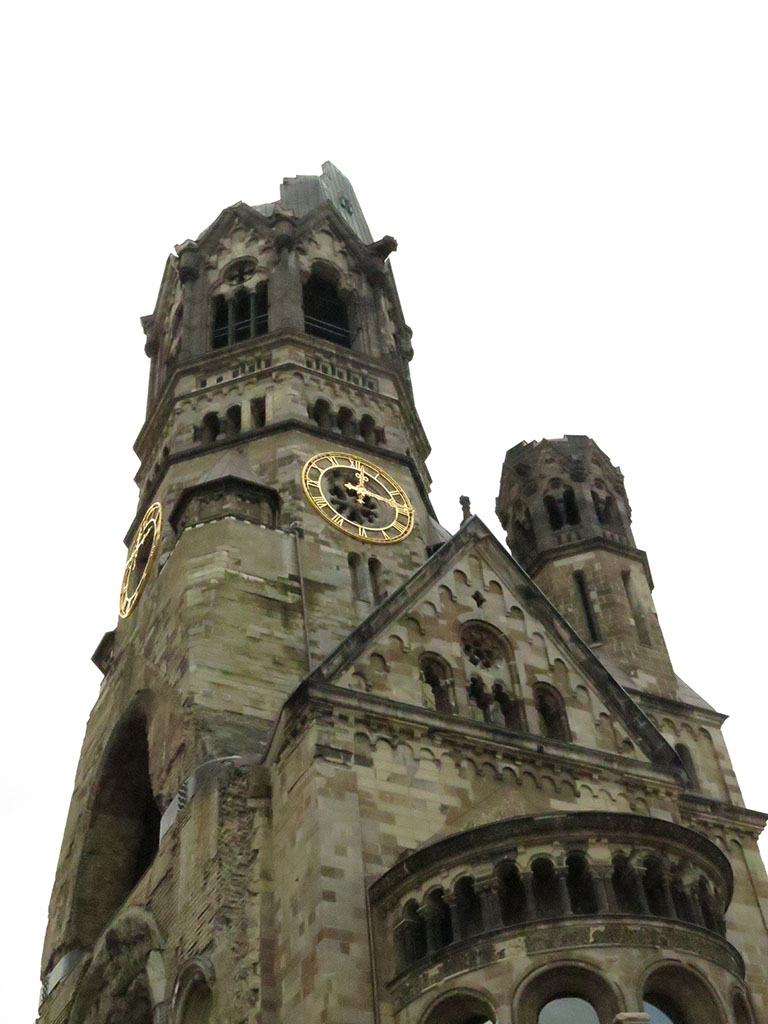 a sad reminder of the past

What remains is about a quarter of the original church. Rather than demolish completely or rebuild exactly as it was, it was decided to leave part and rebuild a new church around it. So what you get is a shell and a new, very contrasting, new building.

I couldn’t really capture the new building in the photo with the old, as the “new” part (still 50 years old) was behind scaffolding. But they bombed part was a chilling reminder of yesteryear. What remained inside was some preserved mosaic work which was quite stunning. But alas, there was not much to see that was left standing. 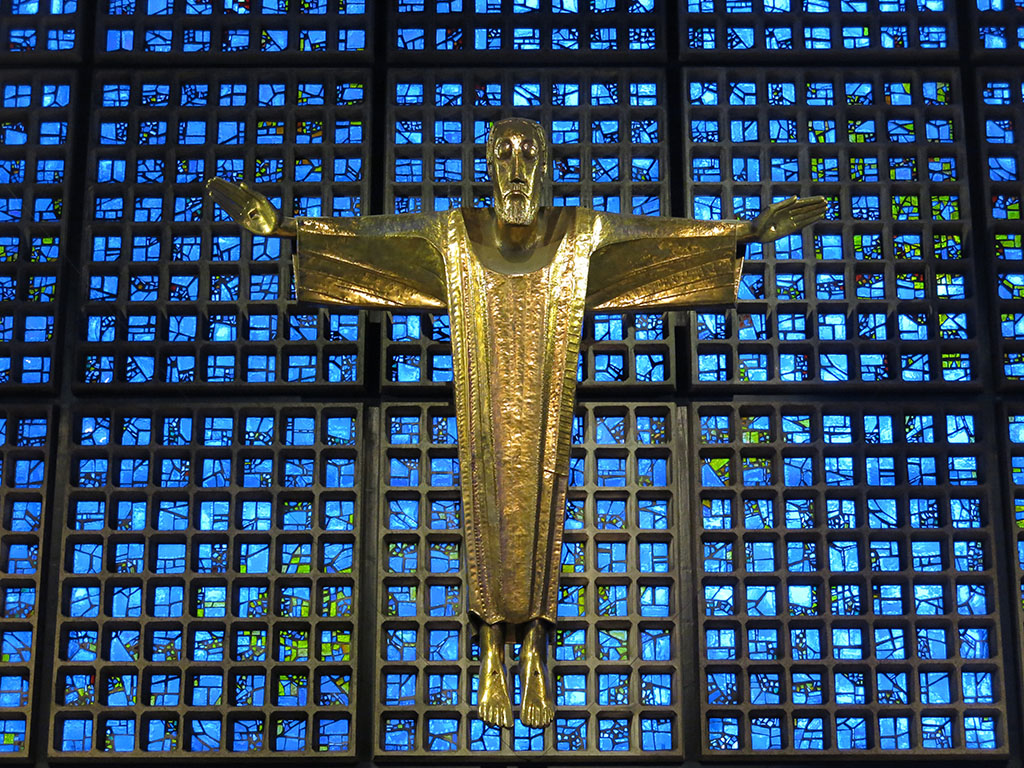 We also went into one of the new parts and it was a huge contrast. This was very dark and brooding inside… all dark blue stained glass. A very dramatic statue looked down on us too. 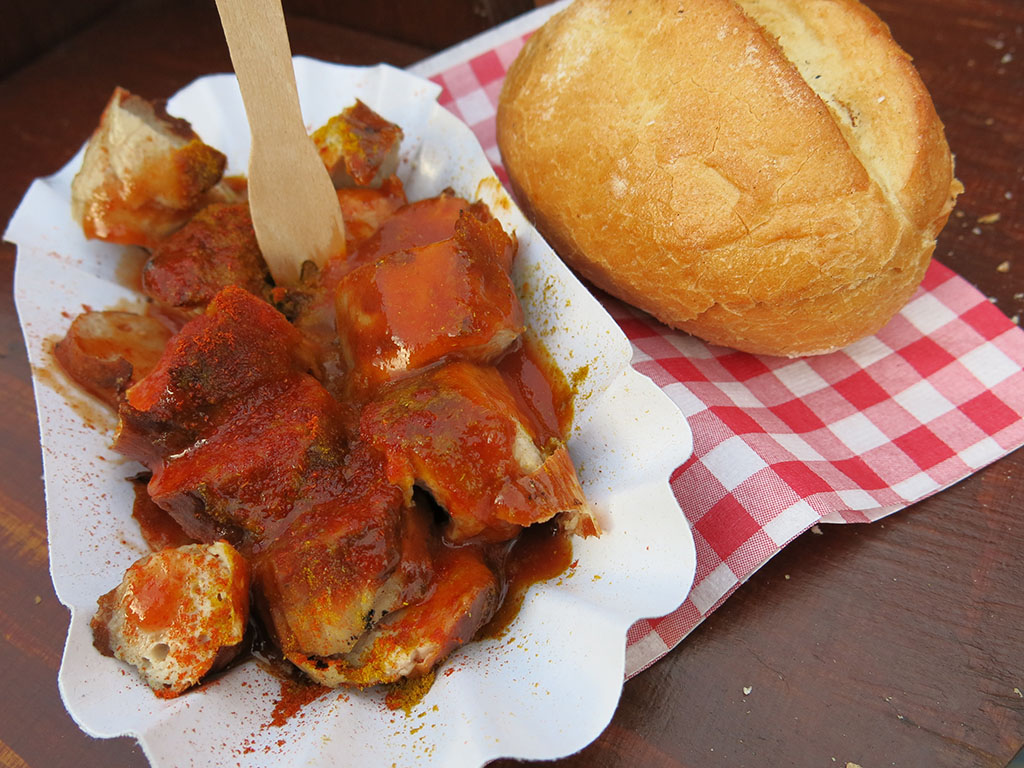 With that it was time for some lunch at the nearby Christmas market. No wine for lunch, but of course there was some wurst… currywurst this time. Mmm…

We hadn’t really planned our afternoon. We originally thought we would head back to Museum Island to visit the other museums we hadn’t seen, but instead the glorious Berlin day led us to think we should stay outdoors for a bit. So given we were close-ish, Kate suggested we pay Charlottenburg Palace a visit. 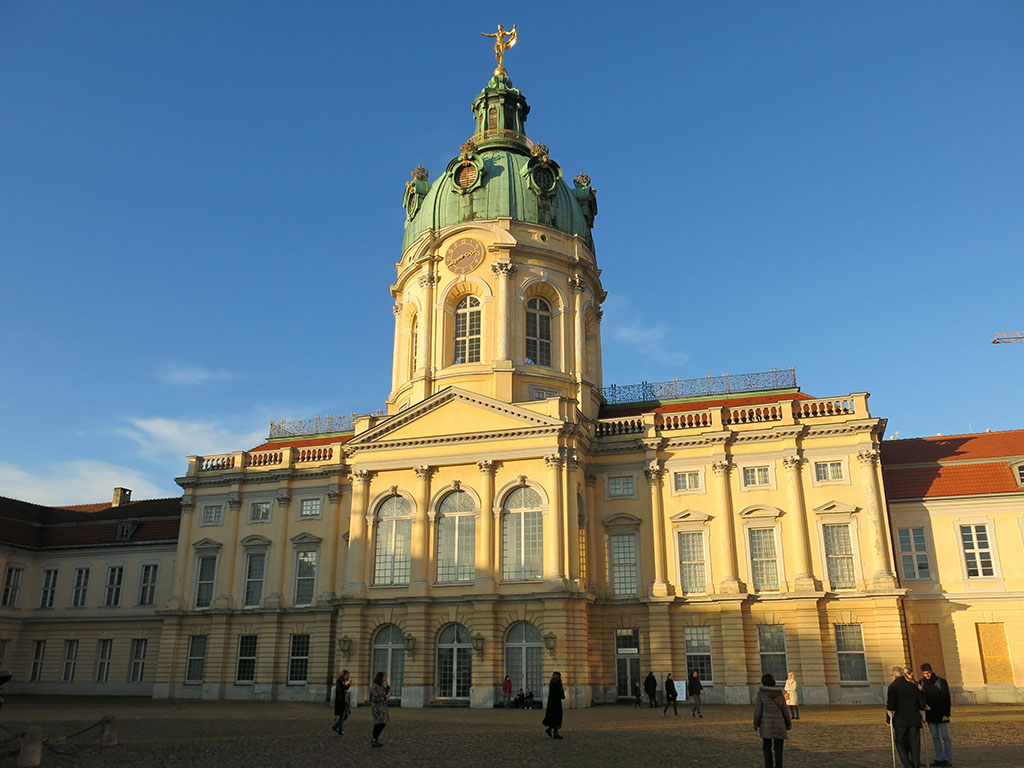 Kate had a couple of palaces on her list, this and Schloss Sanssoucci in nearby Potsdam. We thought about doing both, but given all the bustling around we were doing, we thought maybe Charlottenburg might be the place to visit first. 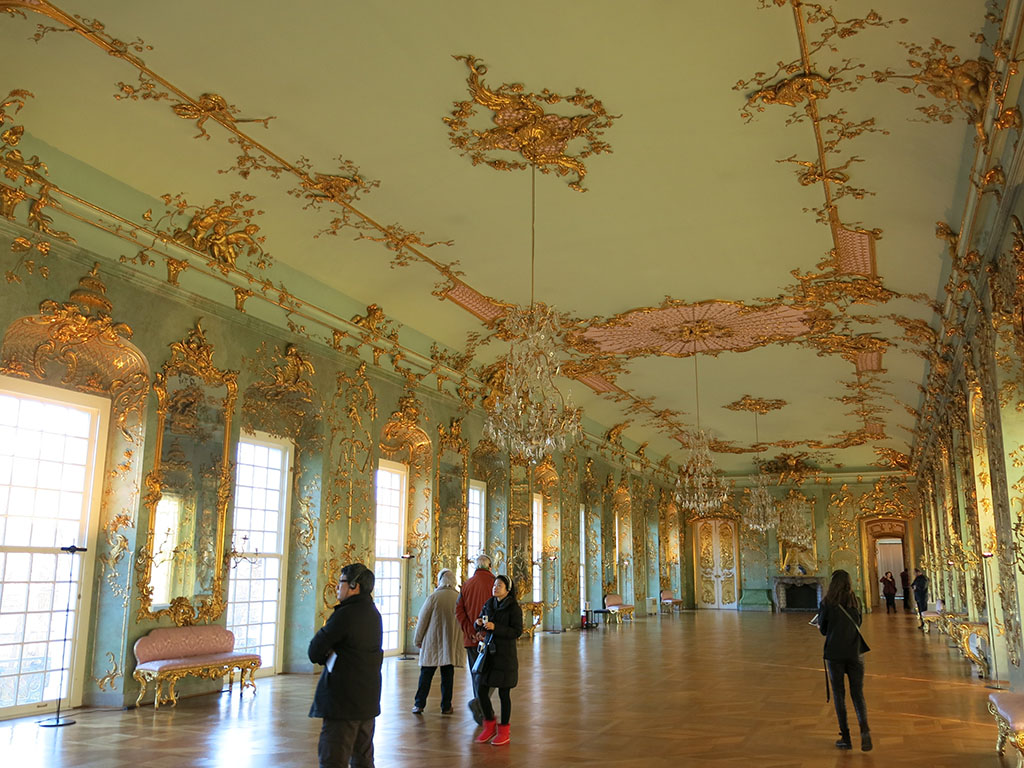 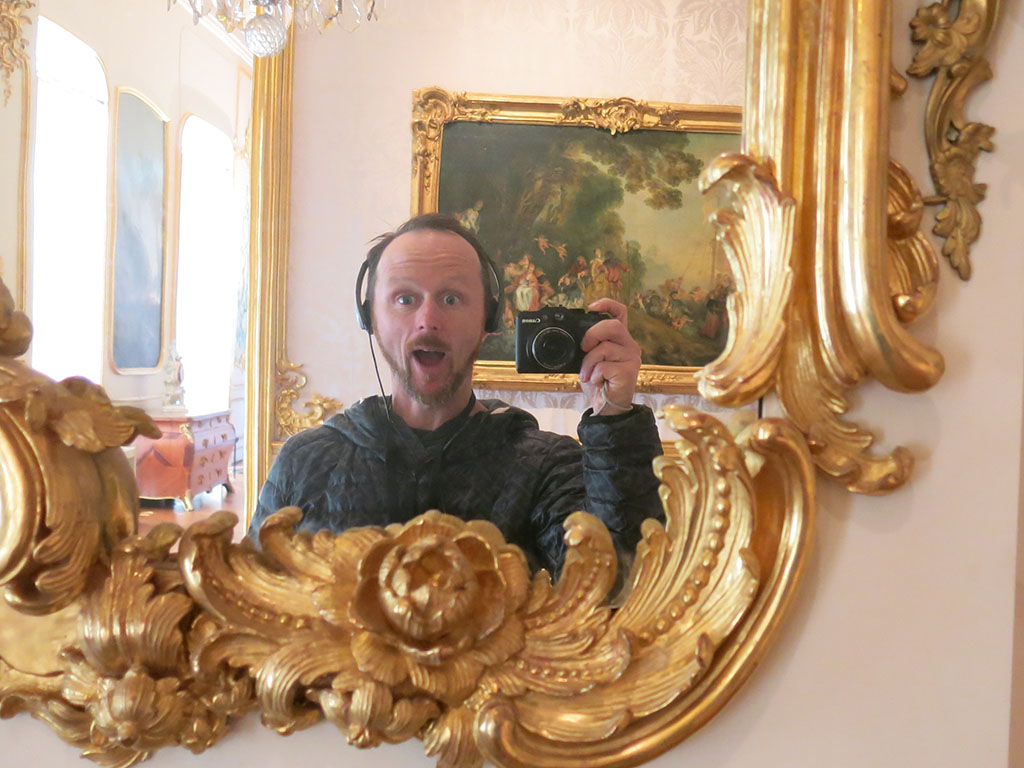 This was an interesting place to visit, as much of Berlin is. A 17th century palace for King Friedrich, the palace was heavily hit during WW2. So what we were visiting was, in many respects, a faithful reproduction of the original. As much original material was kept as possible, but at times were were looking at restored, or repainted, or rebuilt palace. 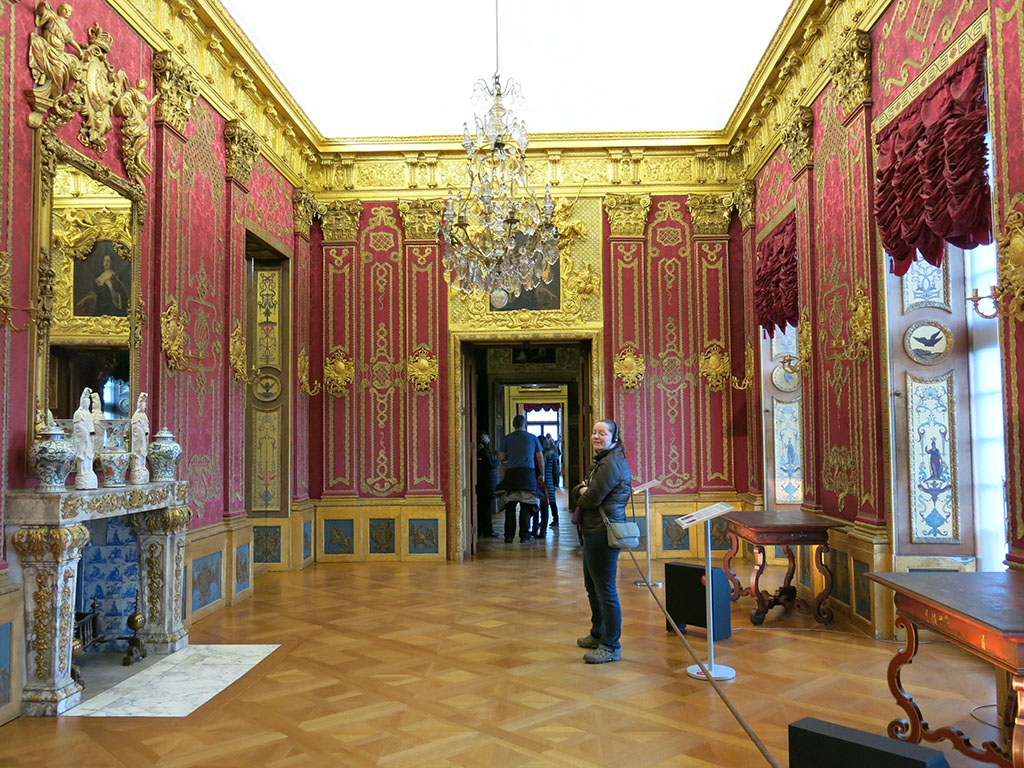 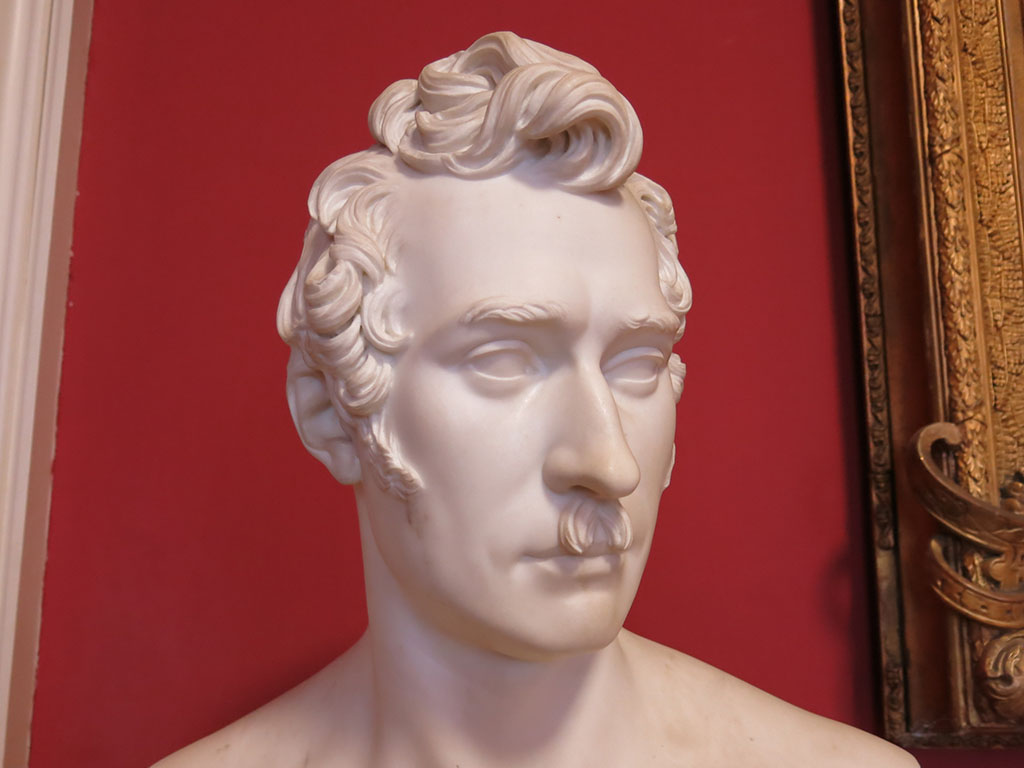 … but not as impressive as this moustache

So for this reason while it was still quite a sight to behold, it was not as impressive as say a Versailles that was a more pure time capsule.

But this is what Berlin has to manage… preserving the past after the devastation of the past century. It is what makes it so fascinating for me. 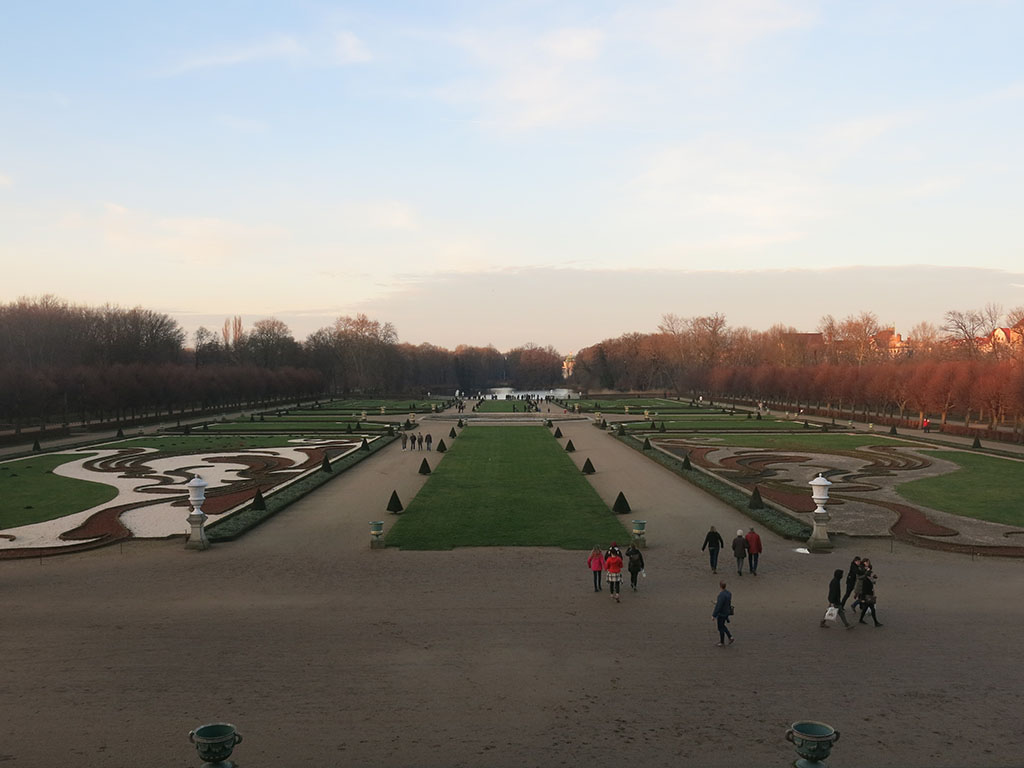 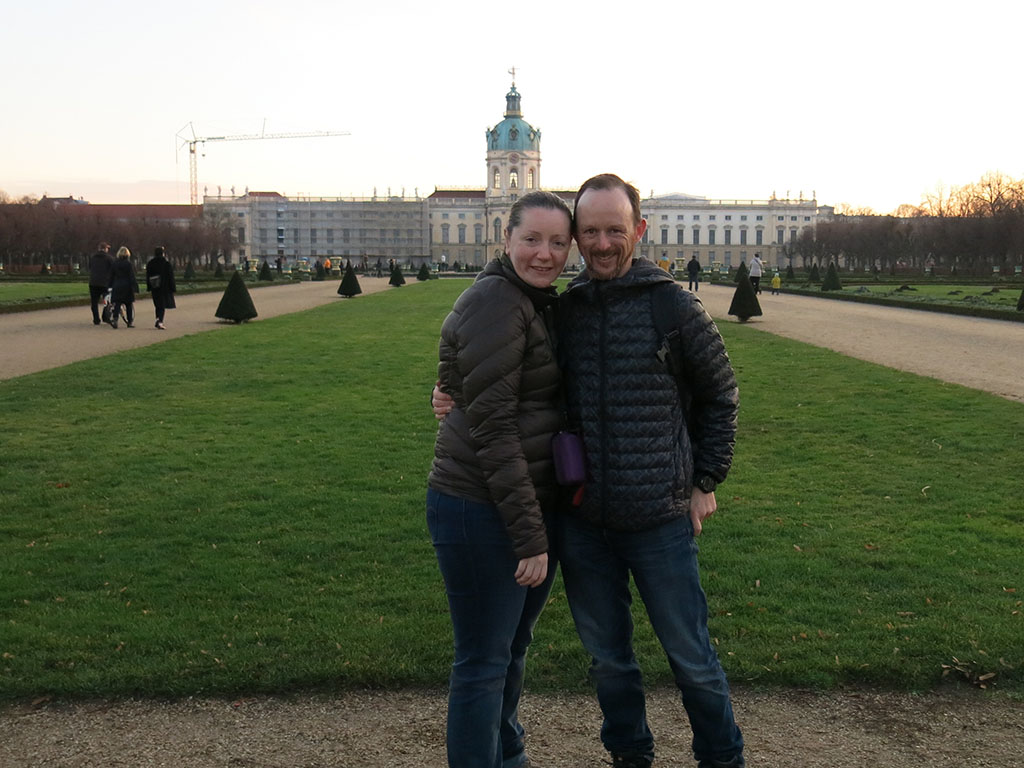 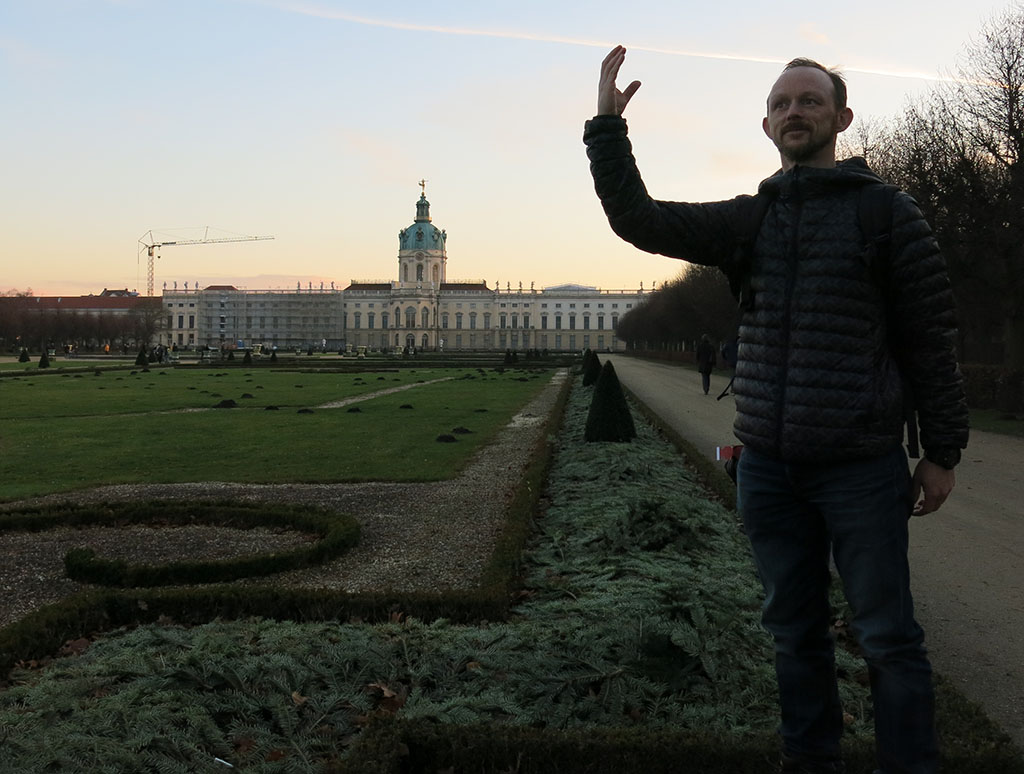 … and not so serious

So over the next few hours, we wandered through the new palace and the old, as well as out into the gardens. Time was our enemy though as the sunsets in Berlin at about 3:45pm, meaning our wandering in the gardens was a little more brisk than usual.

But you know what that meant? We got to their Christmas market even sooner than expected! Yep, another market! 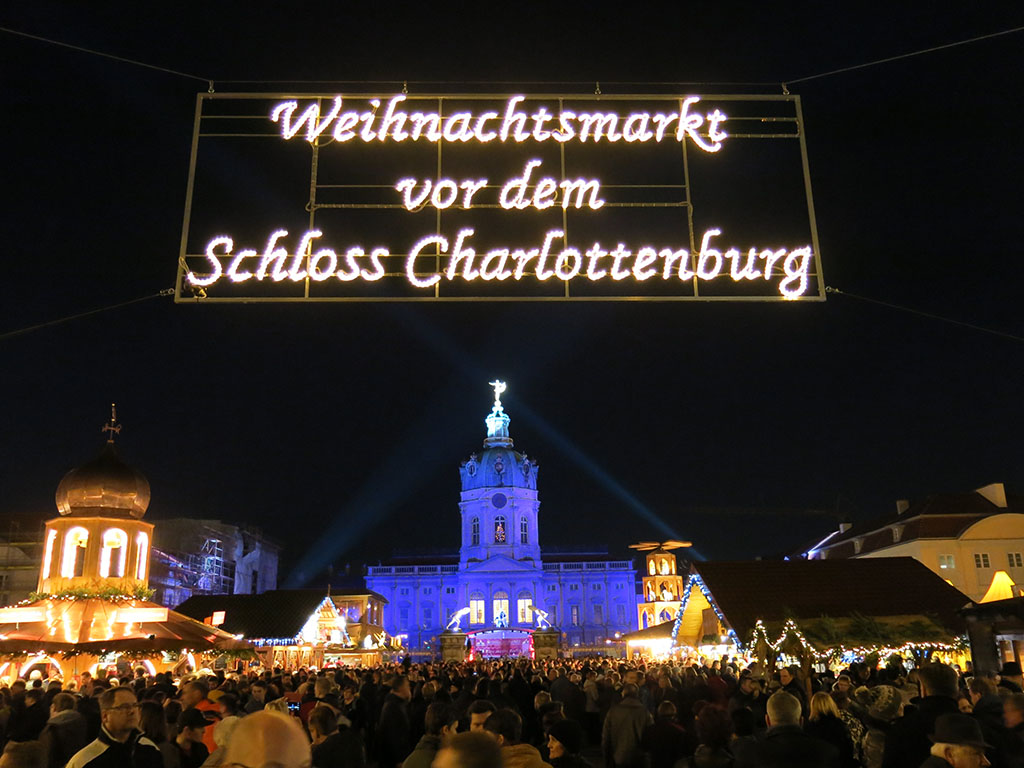 By this stage, all the stalls were starting to blur into each other from the other markets. But what we loved is that we could rely on being able to get tasty food and wine for dinner. I was going to make the most of it! 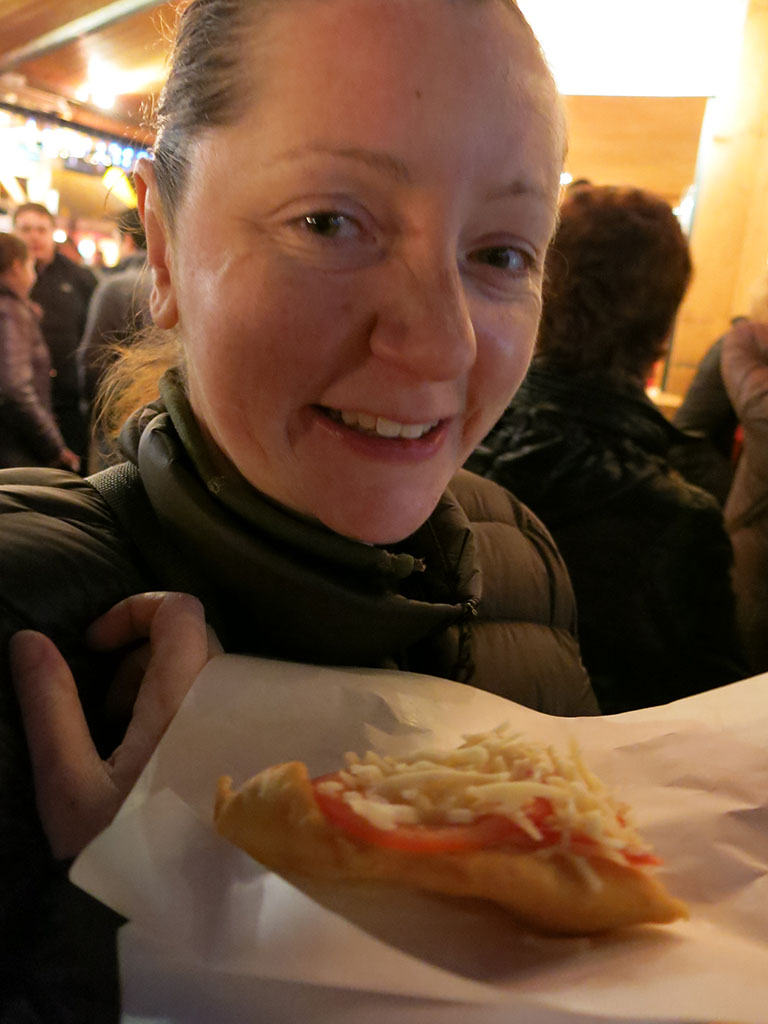 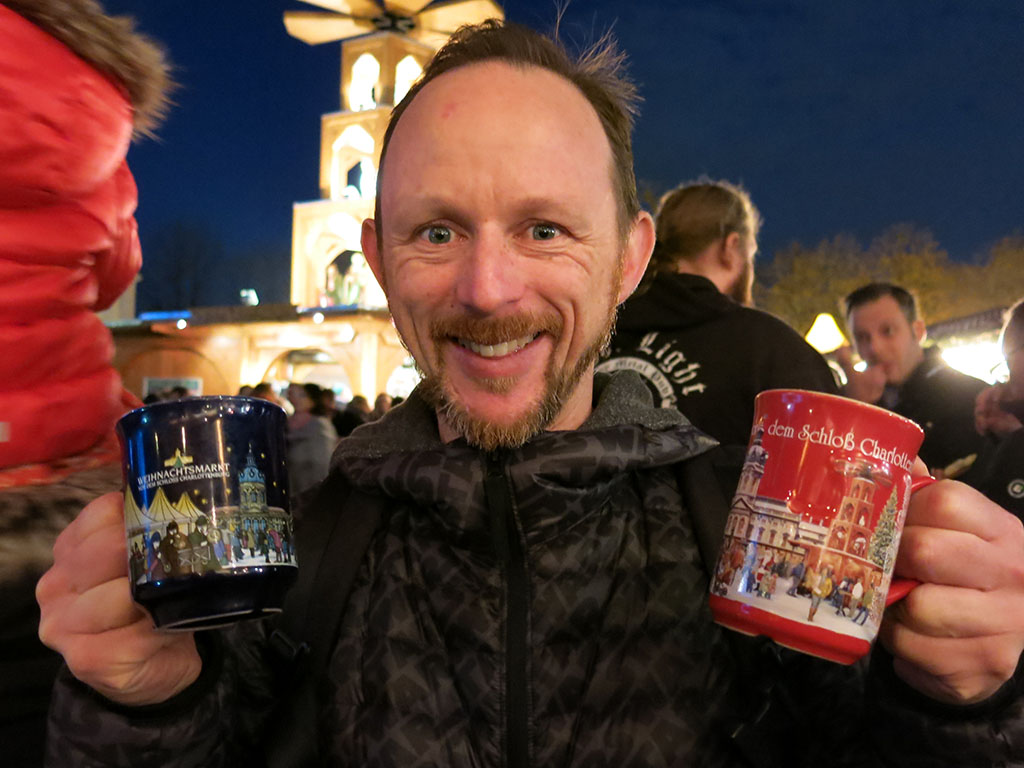 and a lot more wine!

With sausage and potato pancakes and gluhwein under our belts we wandered about, soaking up the Christmasy vibes until it was time to jump back on the S-Bahn and chill out back at the hotel for the rest of the evening. Tomorrow was going to be another day full of shenanigans of which I was very excited about.