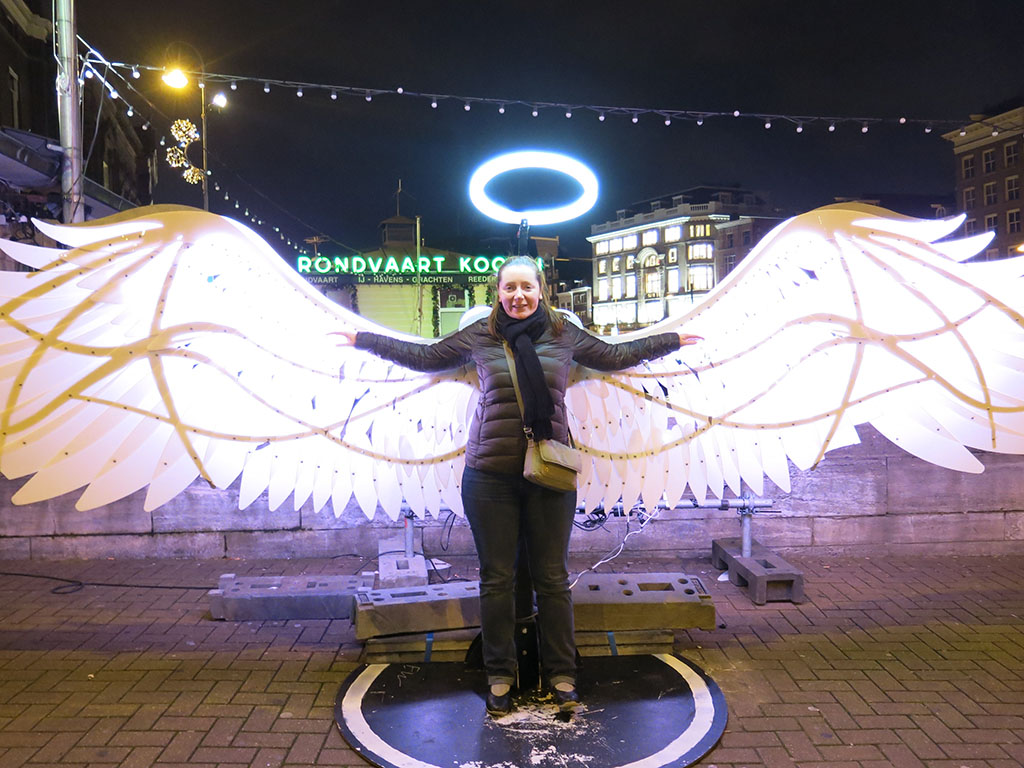 A lazy morning greeted us on this fair Boxing Day. After a bit of a lay in, off it was again to visit some sights. 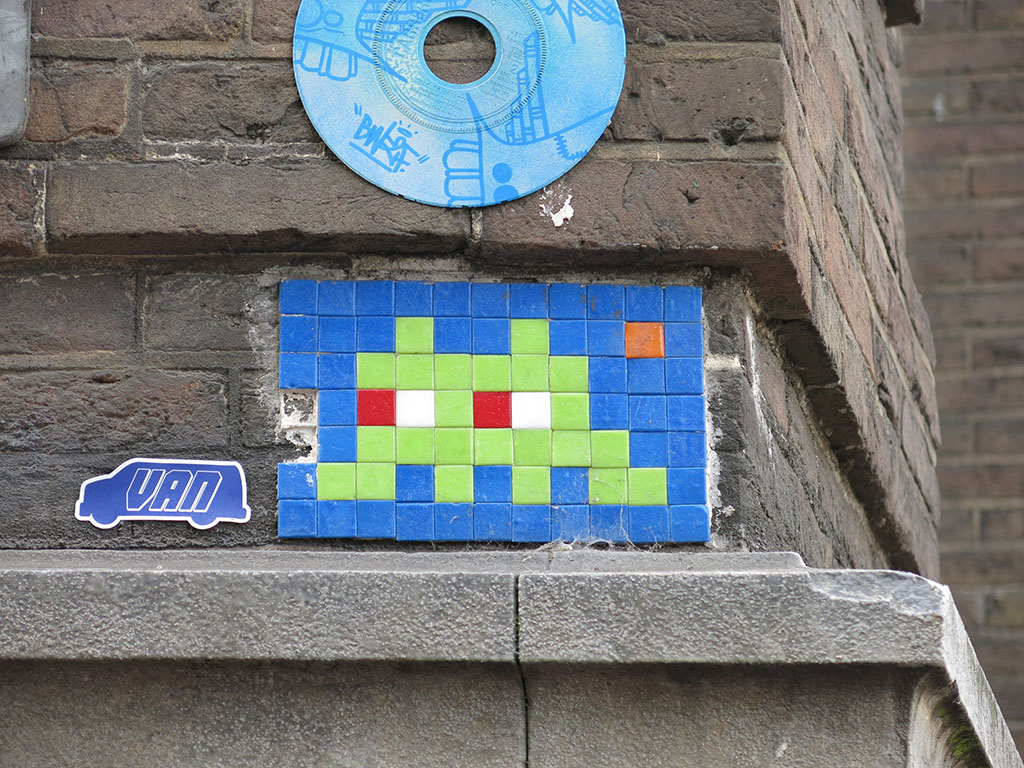 i spy an invader!

On our travels I was greeted with a surprise waiting on a street corner. I know we are in Amsterdam, but get your mind out of the gutter. Up on the corner of one of the canal buildings was an Invader! It was nice to spy another after finding a few in Paris. I had a sense that there was a bunch around Amsterdam, so I would have to get on the hunt later in the week. 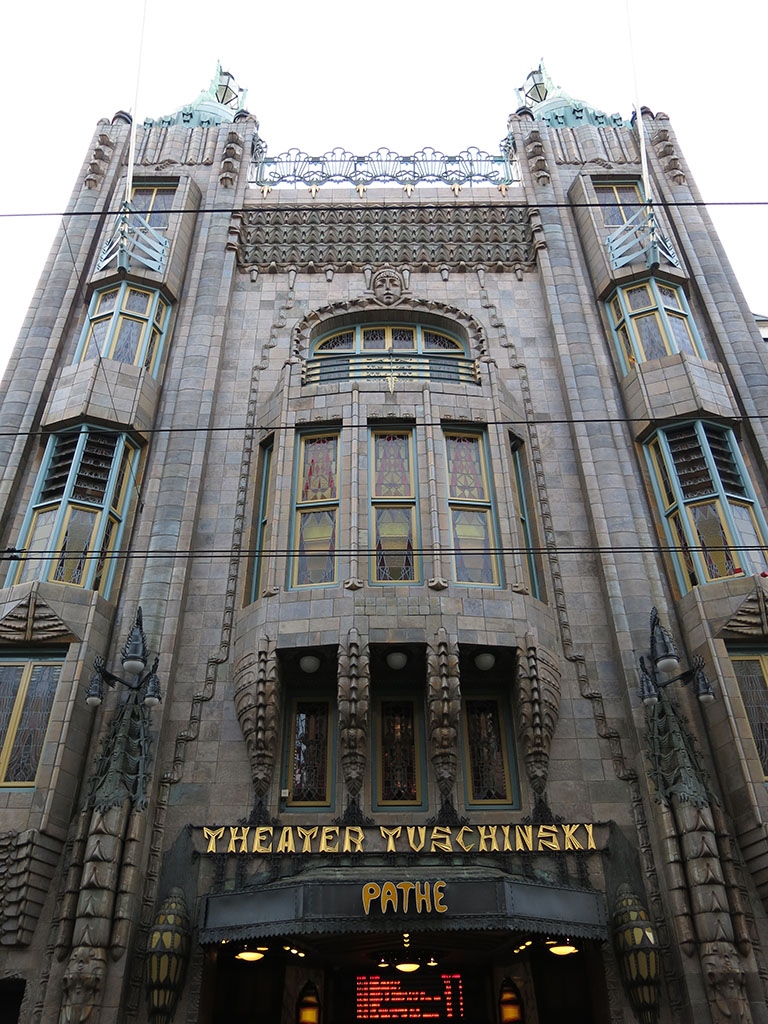 i love a gorgeous cinema

Our wandering also took us past a sight we would most likely come back to, the Pathe Tuschinski. This is apparently one of the most gorgeous cinemas on the planet. From what we have heard it sounds very much a kindred spirit of our beloved Astor (although with more of a focus on current films), so I could feel another viewing of Star Wars in my future 🙂 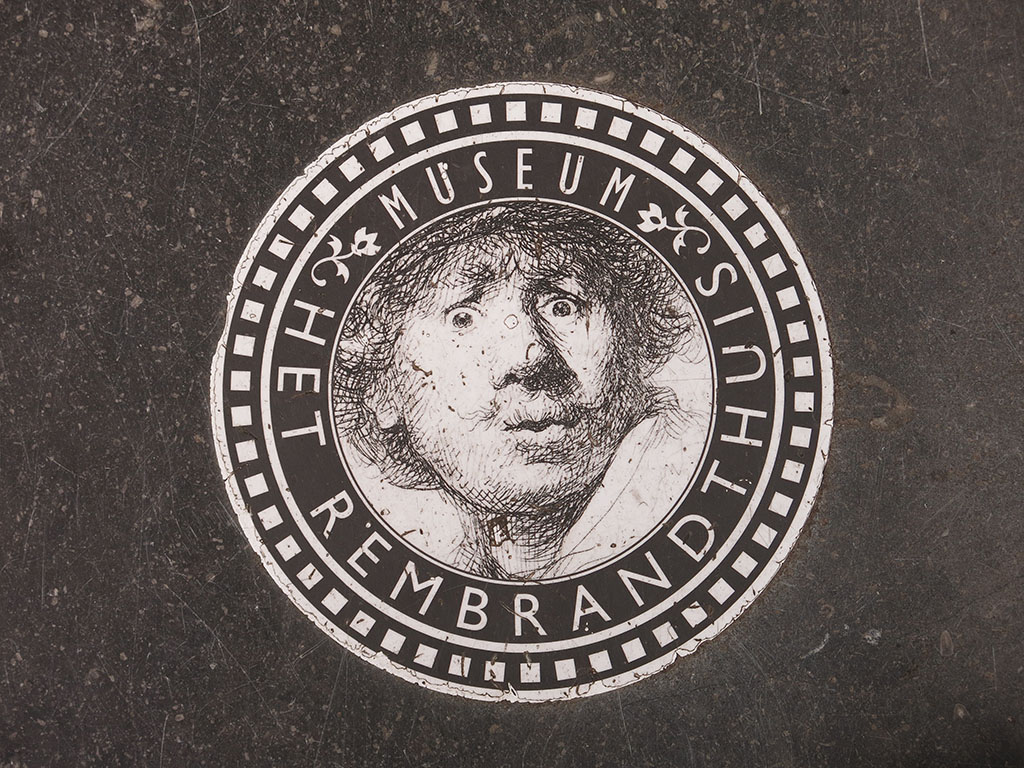 Finally we arrived at the house of an old master… yep, it was a visit to Rembrandt’s house. The old master lived in Amsterdam in a well-to-do house on one of the main canals. Even though he moved out at one point (because he couldn’t afford it), it had been reclaimed and turned into a museum commemorating the way he lived and his studio. 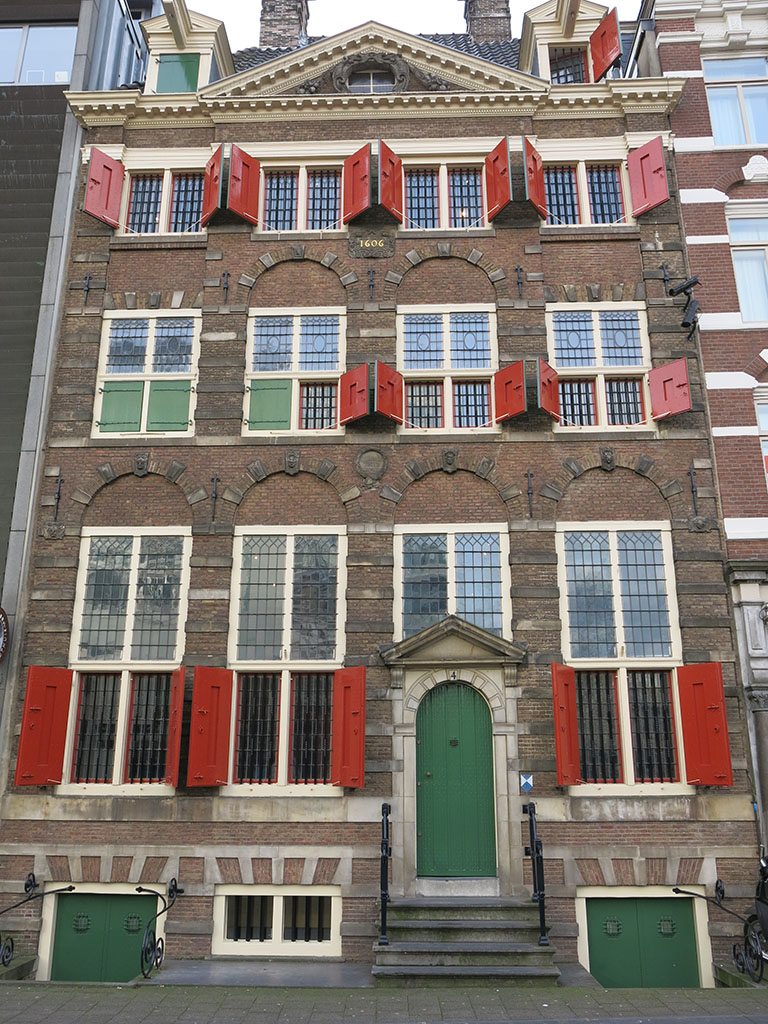 Although quite small, it is nice to head up and down the narrow stairs, getting a feel for how he operated back in the day and how he ran his studio. There was not too many rooms to go through, although each had been done up as close to what they think they were like, which they could do based on an inventory the taxman took when Rembrandt went broke! 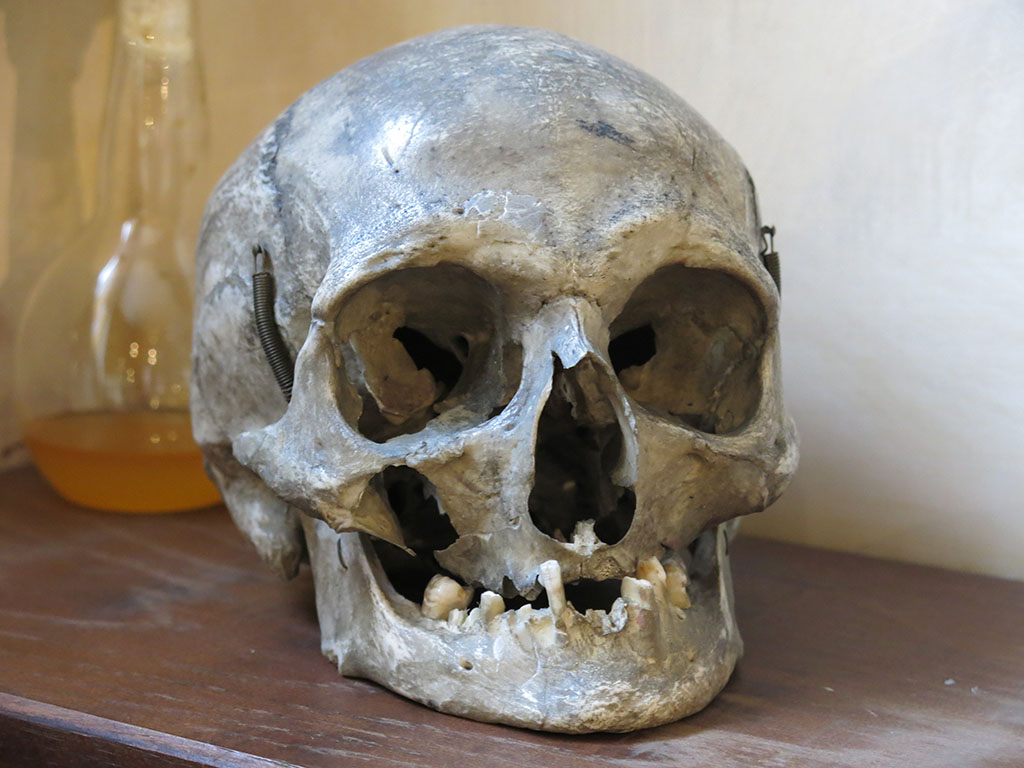 There was also the odd demonstration of paint making and print making, as well as a small exhibition of print work from many Dutch artists.

So it was well worth a visit. If you were on time constraints it probably wouldn’t make the cut, but definitely worth a look with time and our museum pass. 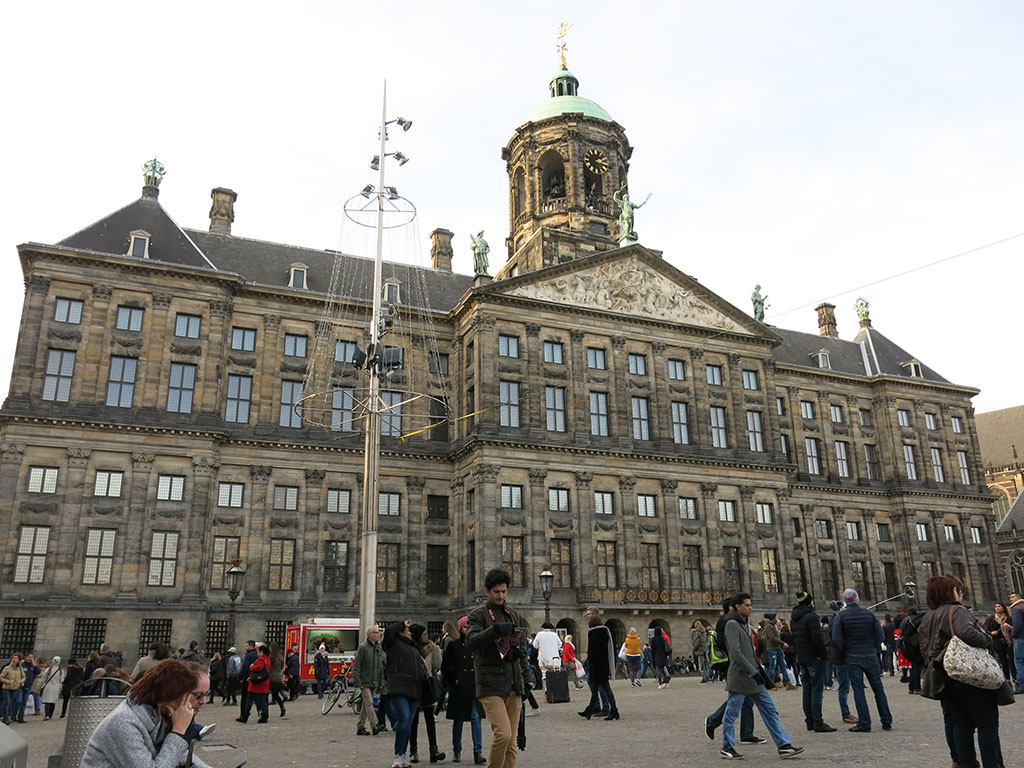 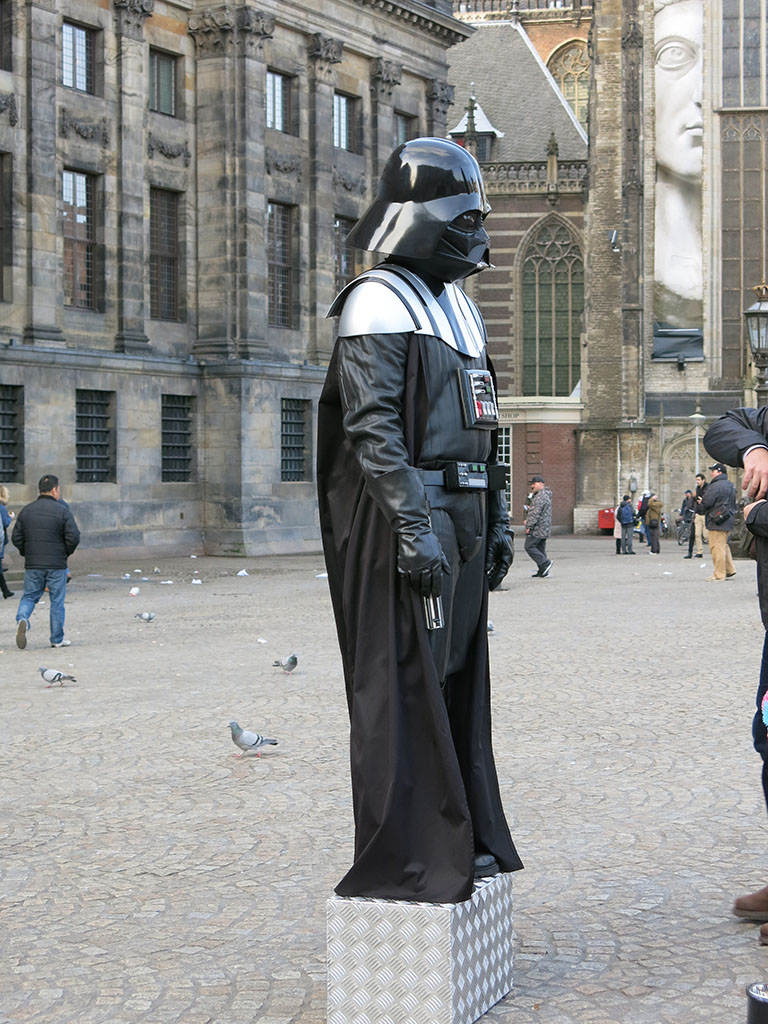 Next up we headed toward the main city square, or Dam. Located there was the old town hall, now a Royal Palace. The main square was bustling, and certainly the busiest we had seen anything in our time in Amsterdam so far. Maybe this was a combination of being Boxing Day, a Saturday, and also being in probably the most touristy place in the city. Your usual cast of busker type characters were hanging out in the square, but with a bit more of a Star Wars theme it seemed. 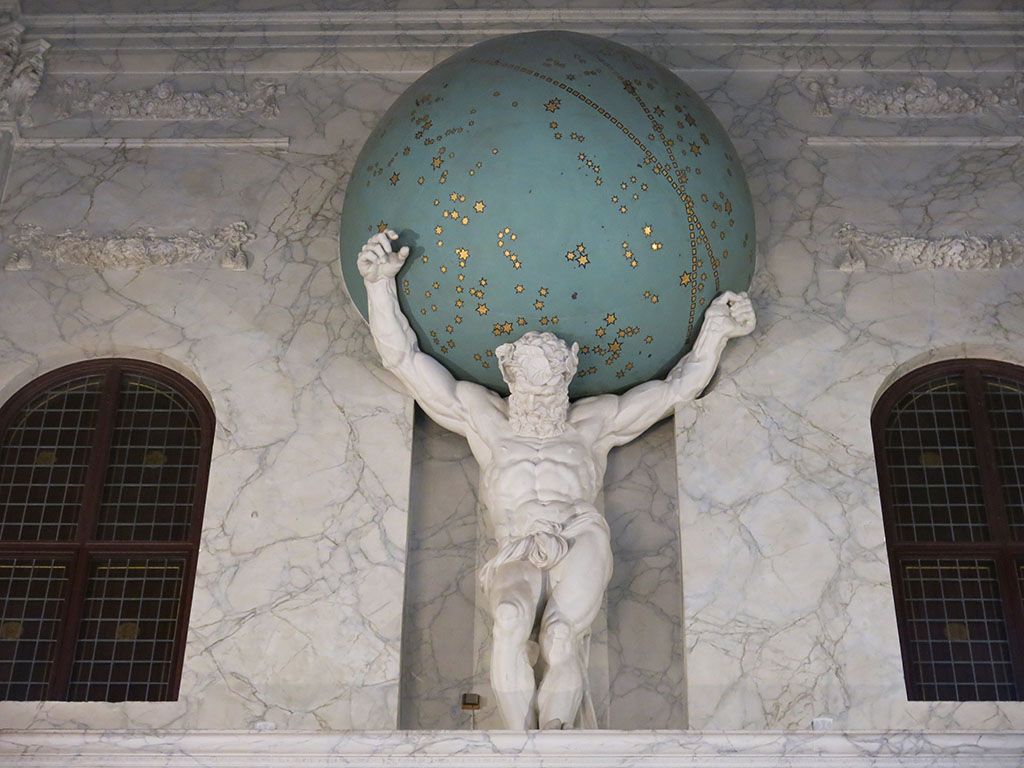 the weight of the world

In we went to the Royal Palace. I found this one a bit more interesting than some of the other palaces we had visited in this trip. I think that was mainly because since the building started as a town hall, the layout was such that rooms that were for the tax officers and the like were turned into bedrooms and other rooms for visiting dignitaries. It also meant there was a huge open space that was originally designed for the people visiting the town hall.  It had a great astral theme, with planets represented and Atlas high above. 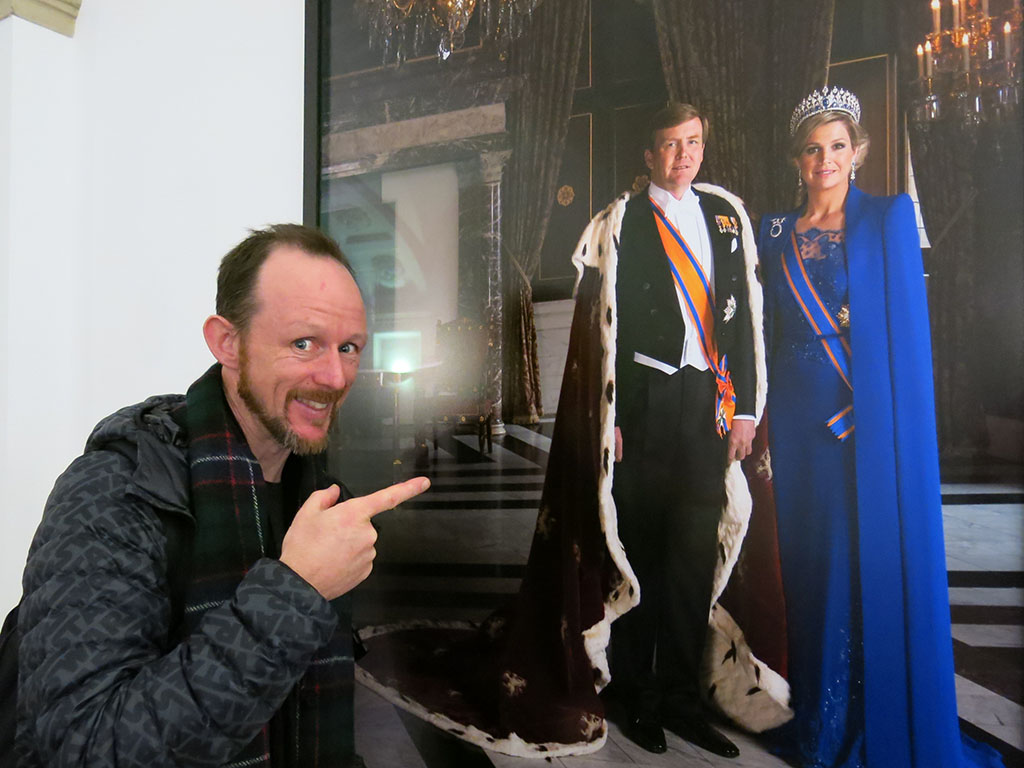 We took the self-guided tour through. Sadly, there were no Kings or Queens there to say hi, so I had to make do with the photo in the main entrance.

It was getting later in the afternoon, but we decided to keep wandering for a bit. Given it was a Saturday and the place was bustling, we decided to head toward the red light district to see some of the seedier side of Amsterdam. To this point in our explorations, given we had been in the museum districts, we hadn’t really seen anything of the ilk that Amsterdam is notorious for.

We knew we were wandering toward the red light district, as the number of “coffeeshops” started to increase dramatically and the nature of the people on the street changed ever so slightly. Not that the people suddenly became a dodgy looking bunch, rather the number of tourists grew, as did the packs of guys obviously in Amsterdam for a bender of a weekend. 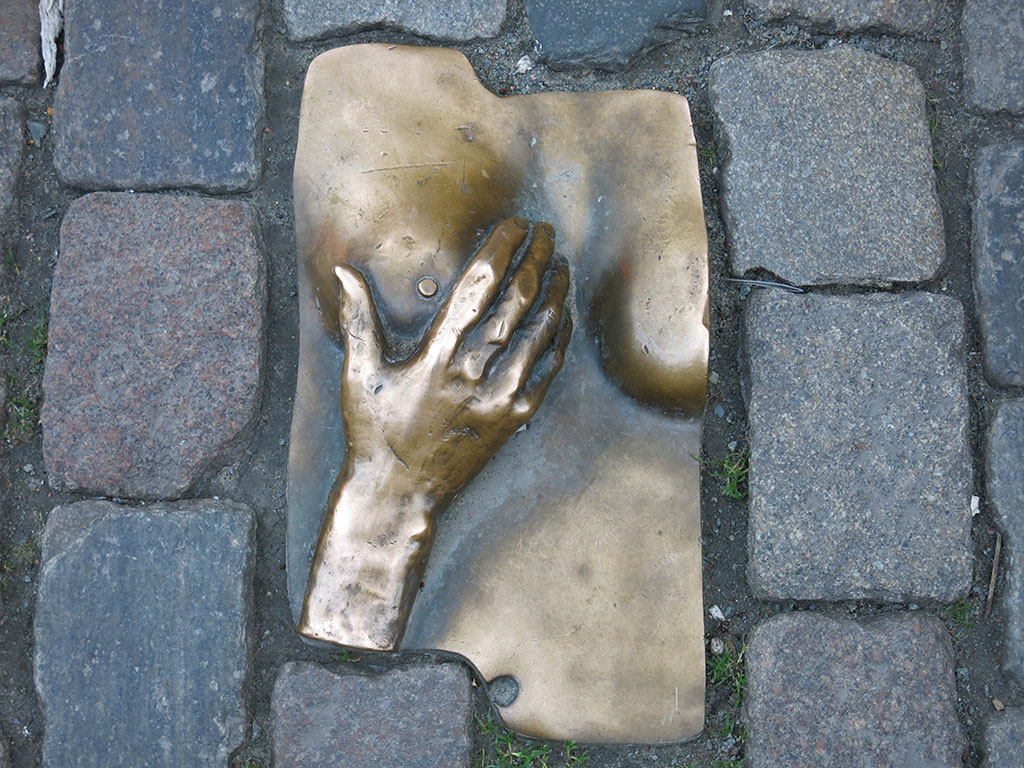 a bit odd being outside a church…

Before we hit the district in real force, we came across the Oude Kerk, or Old Church, which unfortunately now sits nestled in the red light district… as evidenced by the gold plaque strangely sitting out the front!

This was a true oddity. The church is no longer in use, and going in we were greeted with a dull, unkempt, church. For whatever reasons, it is clearly not a priority to do much with this sadly. Inside was a huge pipe organ, but I can’t imagine it gets played anymore. And also in the huge space was some pews and booths and remnants of days gone by. So strange in comparison to all other churches we had visited. I guess it is symptomatic of the Netherlands lower interest in faith like this. 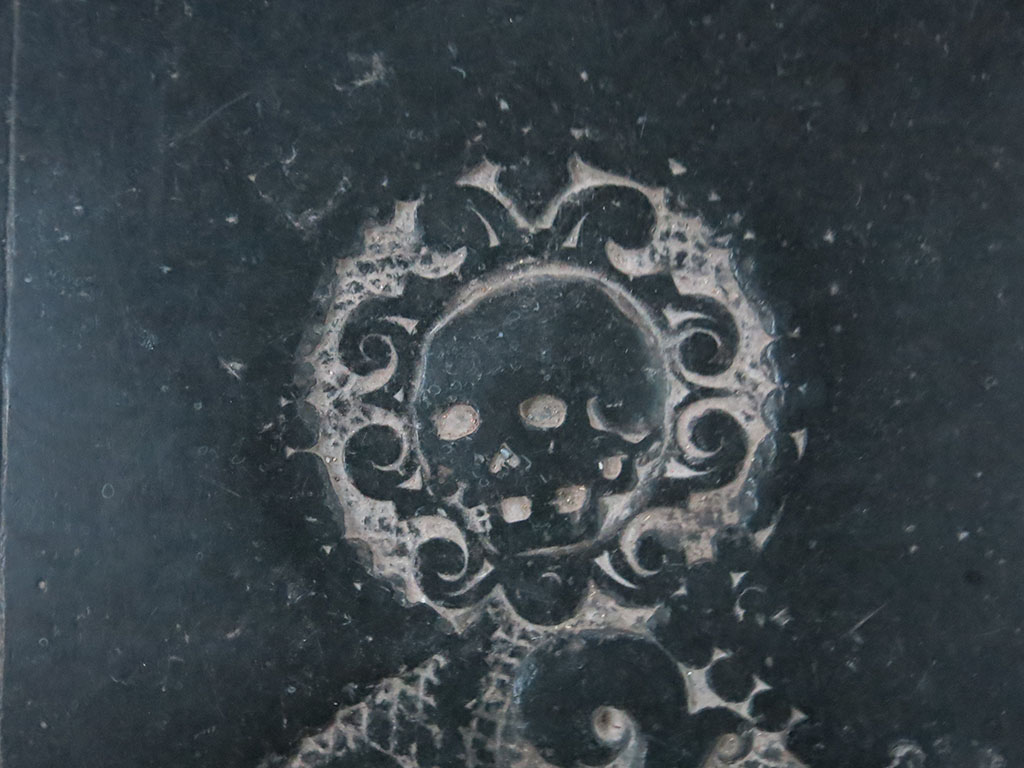 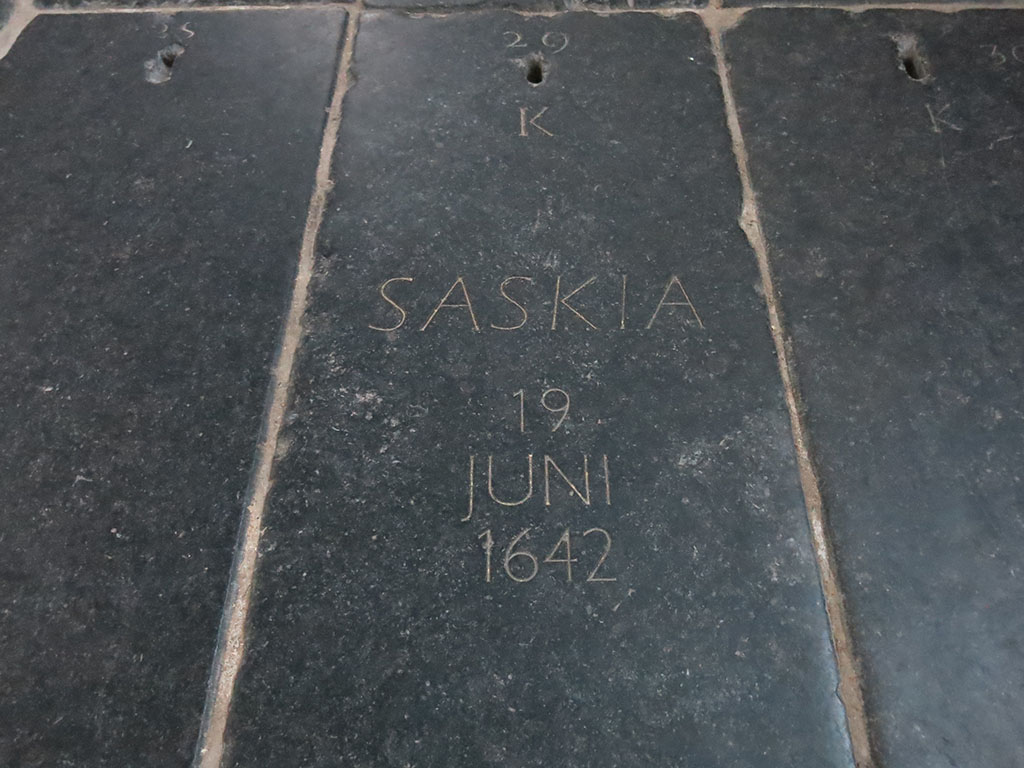 Inside there was some evidence of tombs and those buried. One that Kate found was Rembrandt’s wife Saskia. Apparently Rembrandt was a frequent visitor to this church back in the day. 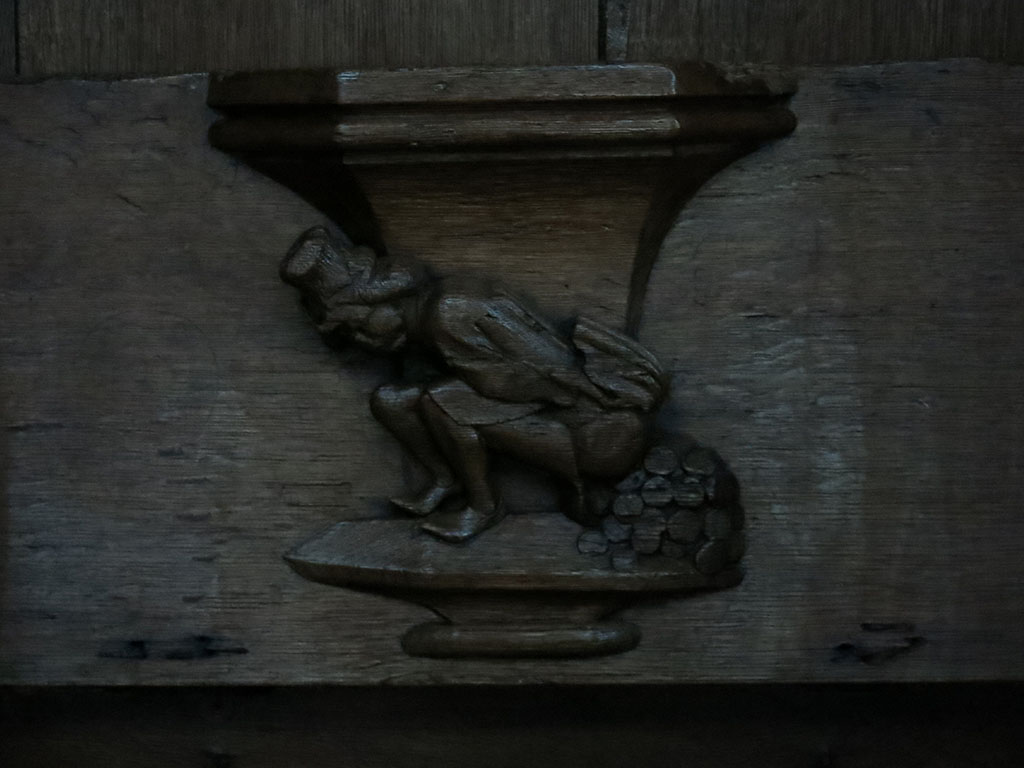 We found some very strange wood carvings in one of the areas. 32 carvings told different stories. This one of a guy pooping money was just too weird not to take a photo.

It was well and truly dark by now and given there was no electrical lighting in the church, it was time to leave. And we were smack bang in the red light district.

To be honest, I’m not sure really what there is to say about this area. More so than find it confronting or sad, I just find it surreal. You have an amazing beautiful old city, with gorgeous canal houses and streets, and then you start to walk past red windows with women in them and you are immersed in an altogether different place. While some ladies would try to “entice” the lads walking by, most seemed disinterested, checking their text messages or somesuch on their phones. For most visitors to Amsterdam, like us I guess, it is just a tourist spot of some perverse interest no different to any other tourist spot. When in Rome. 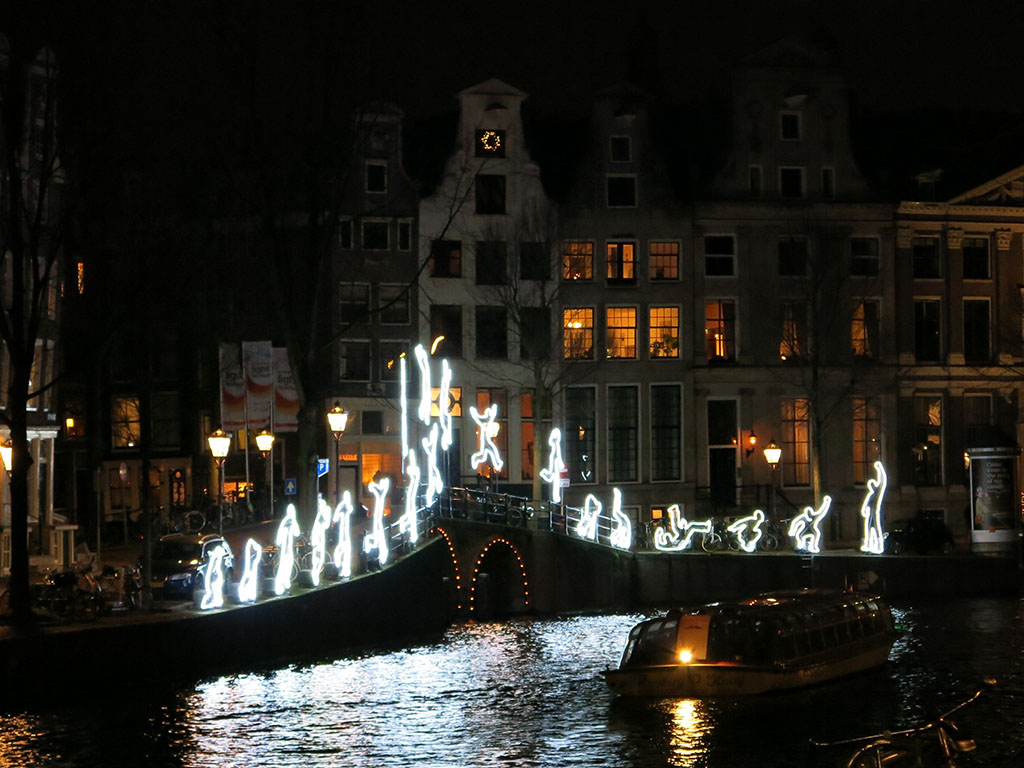 So after experiencing some of the other sights that Amsterdam has to offer, we slowly made our way back toward the hotel, having a bite to eat on the way. Kate’s ankle was giving some grief, so I decided to head out for a bit more of a wander for an hour just to see Amsterdam thriving on a Saturday night. The annual Light Festival is in full swing (more about that in the next blog post), so I decided to visit a couple of those sights, before heading back to the hotel to call it a night.