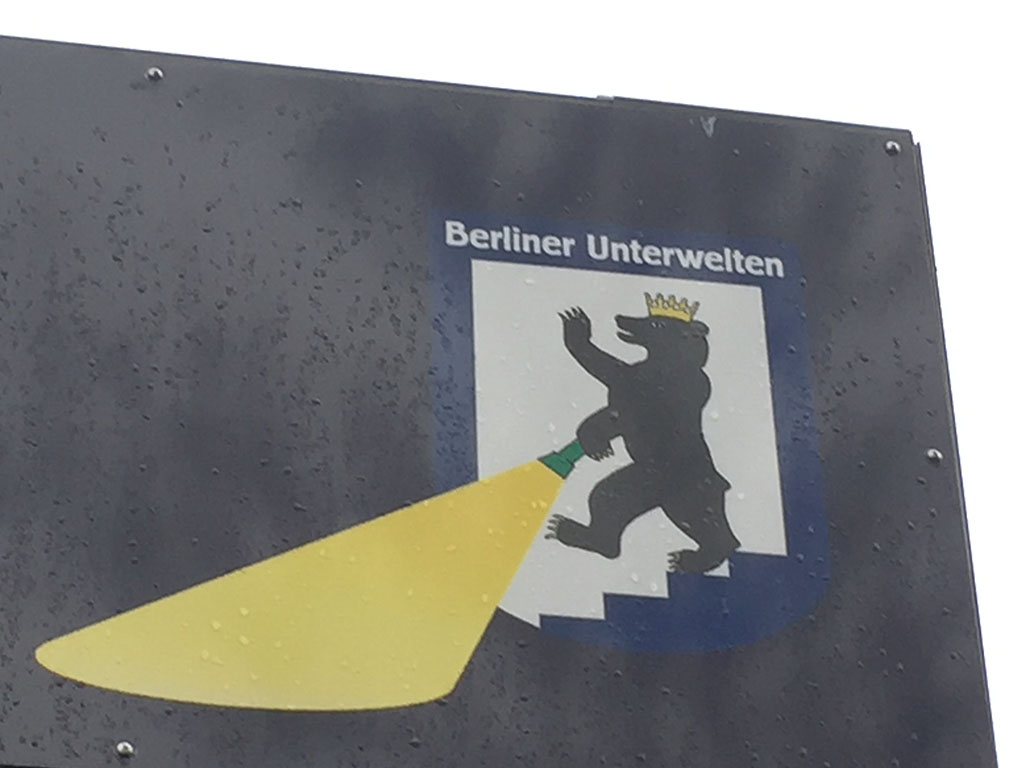 To this point in the trip there had been a lot of museums. A LOT. Given we were in Berlin, there was going to be quite a few more. But we decided to start our day with a different kind of museum.

While painting and sculpture and ancient antiquities are important, it is also important to experience as much of the history of your location as you can. So Kate found a great way for us to do that… by visiting a set of old WW2 bunkers that had been preserved. 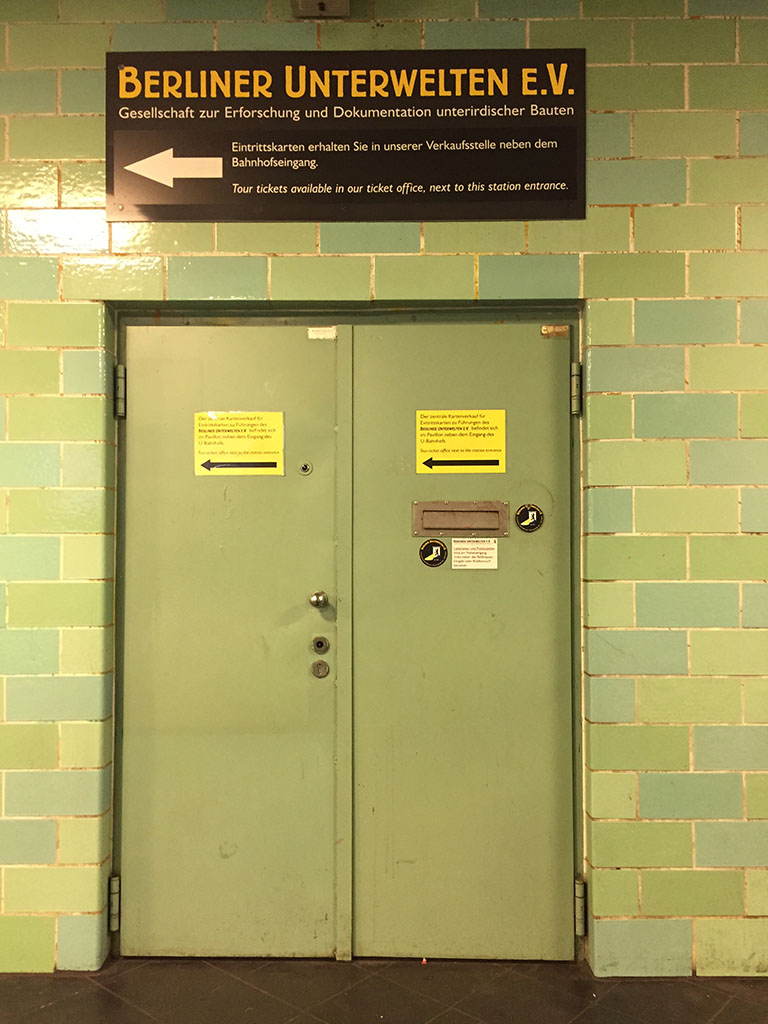 the doors to the underground

So off we headed to visit Berliner Underwelten… a not-for-profit organisation dedicated to preserving this part of Berlin’s history. I was really keen to hear the locals take on some of the events of WW2 and this was a perfect way to do it.

Carsten was our guide, a very funny and affable local (with odd Irish inflections in his voice that he told us was from hanging out in pubs with Irish and Brits too much) that ended up being the perfect guide.

He led us down into what he said was the only real preserved bunker from WW2. The reason it was so well preserved was only due to its proximity to the subway station, meaning it was not in the best interest for it to be destroyed at the end of the war. That was great news for us, as it meant all the painting, signage and the like was all original.

Apologies for the lack of photos, however they were not permitted below the surface. So I will try and describe for you.

The tour was a great history lesson, using the number of rooms we made our way through. Carsten told us all about what it would have been like to be in Berlin at the time, with a very sly sense of humour. He explained that many Berliners shared a similar sense of humour, mostly as a mechanism to deal with everything that had happened in the past. I’m not sure I would be too comfortable cracking some of the jokes he did, and I’m not sure it would be appropriate, but I loved hearing the way locals talk about the past and share their, and mostly importantly their parents and grandparents, experiences. It is not that he was disrespectful. Almost the opposite. Too brutally honest maybe.

It was crazy to imagine the thousands of people that would make their way down almost every night and the conditions they experienced. One great trick Carsten showed us was how all the walls were painted with a glow in the dark paint that still held its glowing properties to this day. He got one tour member to make a pose and he flashed a very bright camera flash… and the resulting shadow on the wall was incredible!

For almost 2 hours he guided us through, telling stories. This was a such a good find by Kate, I can’t recommend it enough. 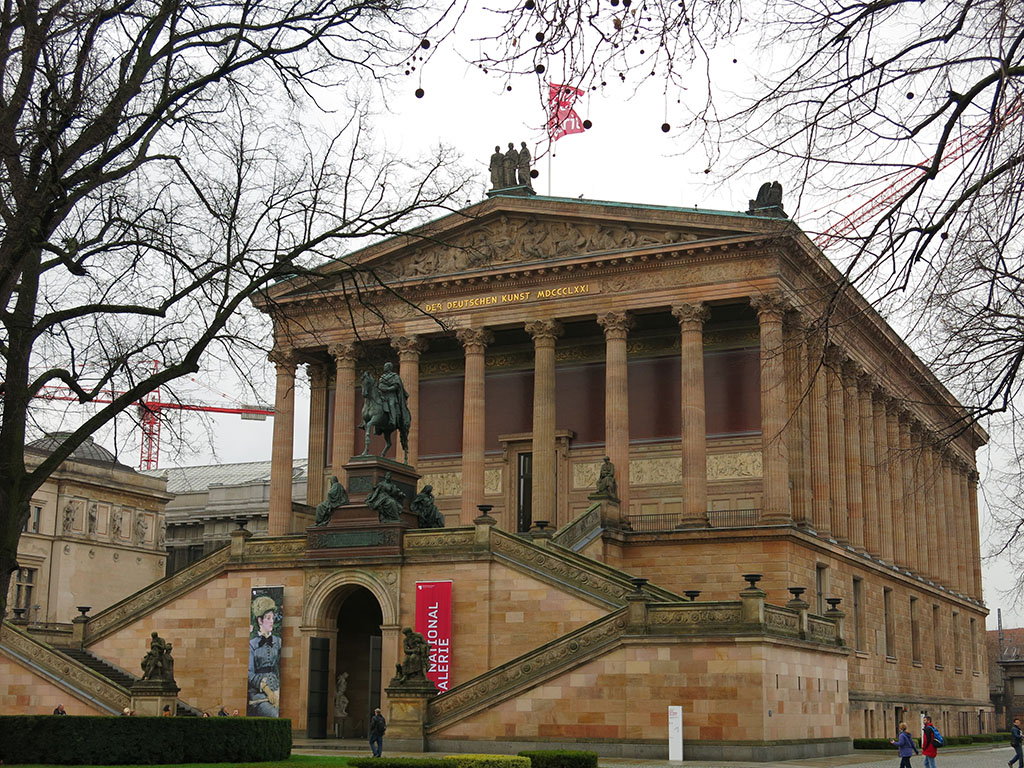 It was after lunch by now, so we decided to head to our next destination and find somewhere to eat on the way. We were headed to Museuminsel. Museum Island is home to 5 of the most important museums in Berlin. These are predominantly museums for ancient artefacts more so than paintings (although the Alte Nationalgalerie fills this gap). 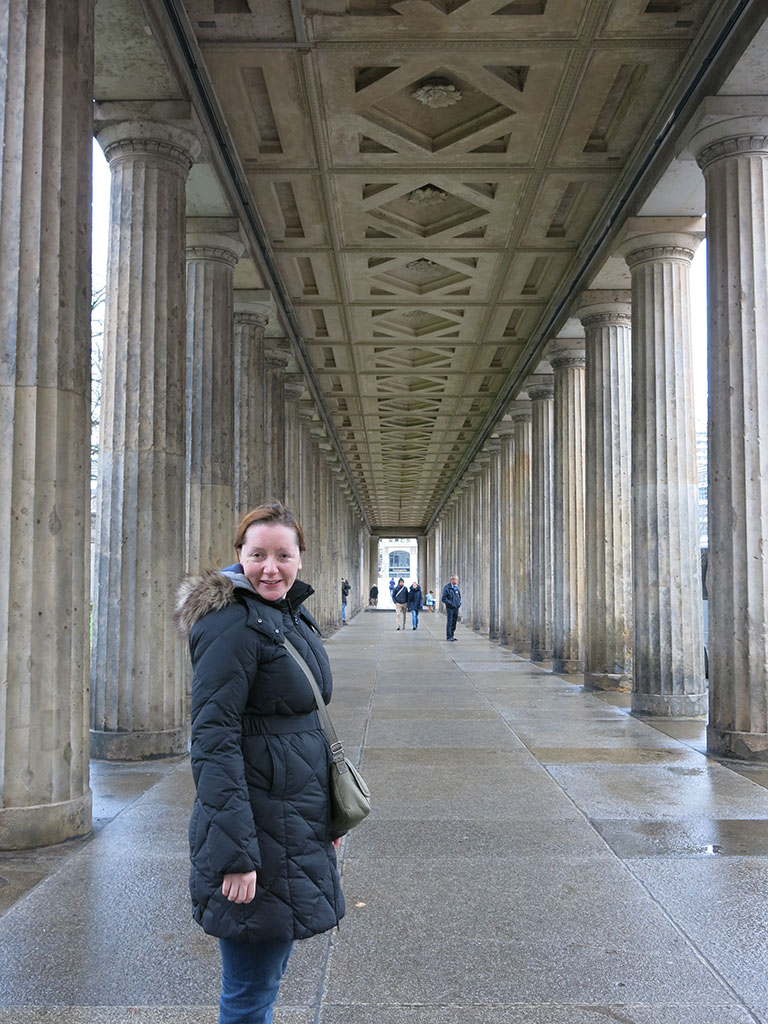 There was a lot of work going on on the island, which made it difficult to get a sense of where everything was. In fact the whole island was part of the Soviet side, and as a result had endured tough times. By all accounts their collections had also been dispersed to some degree after all of the events of the past century. 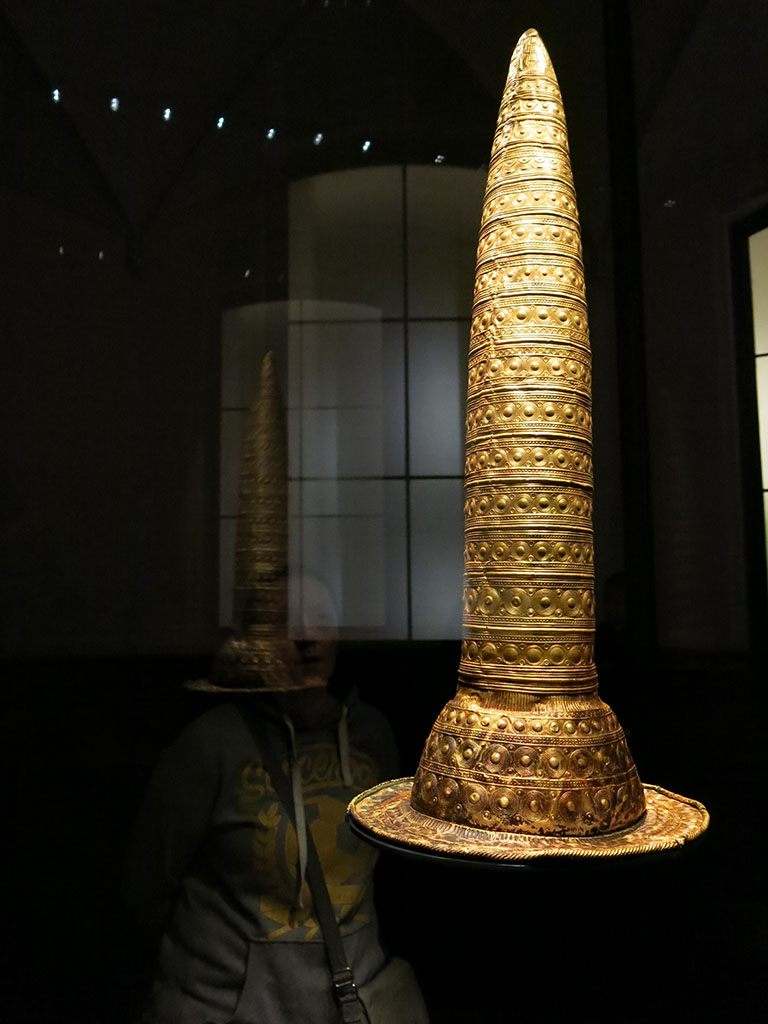 We decided to start in the Neues Museum (New Museum), home to ancient Egyptian antiquities amongst others. We made our way to the top and started our way down. On our travels we found this crazy gold hat. Yep, it was a hat made of gold alright. 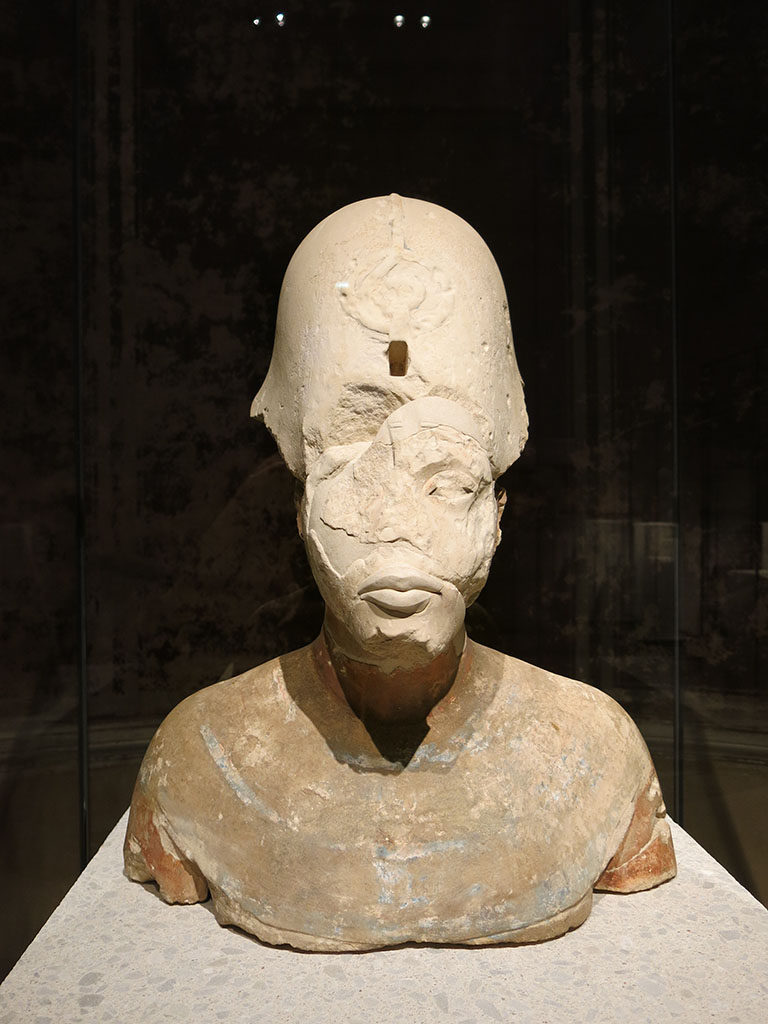 This museum was most famous however for its bust of Queen Nefertiti. Photos were off limits of this, however I was able to snap one of her husband. I love that she has ended up being the most famous of the two of them. Her bust is quite spectacular and in pretty amazing shape given its age, and can only imagine how it captured her beauty.

We wandered the rest of the museum, and thought about popping into another, but decided against it. We had a number of days to visit them with our museum pass so decided to have a break from museums and chill out for a bit at the hotel.

By 6pm though we were getting hungry. Hungry for Christmas food! So we chose another Christmas market from the list and hopped to the metro station to Alexanderplatz. 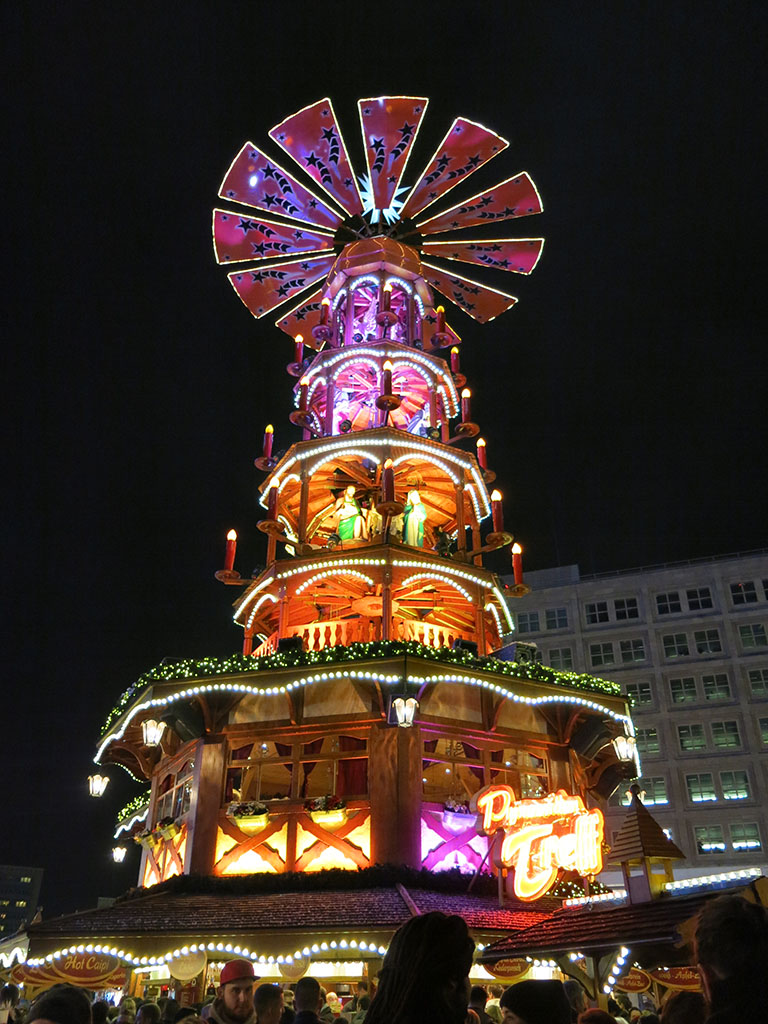 This one was considered one of the bigger ones and when we got there it was certainly bigger than the other two we had been to. Maybe not as much food as the first night, but more stalls, including one huge ornament seller. Score for Kate! 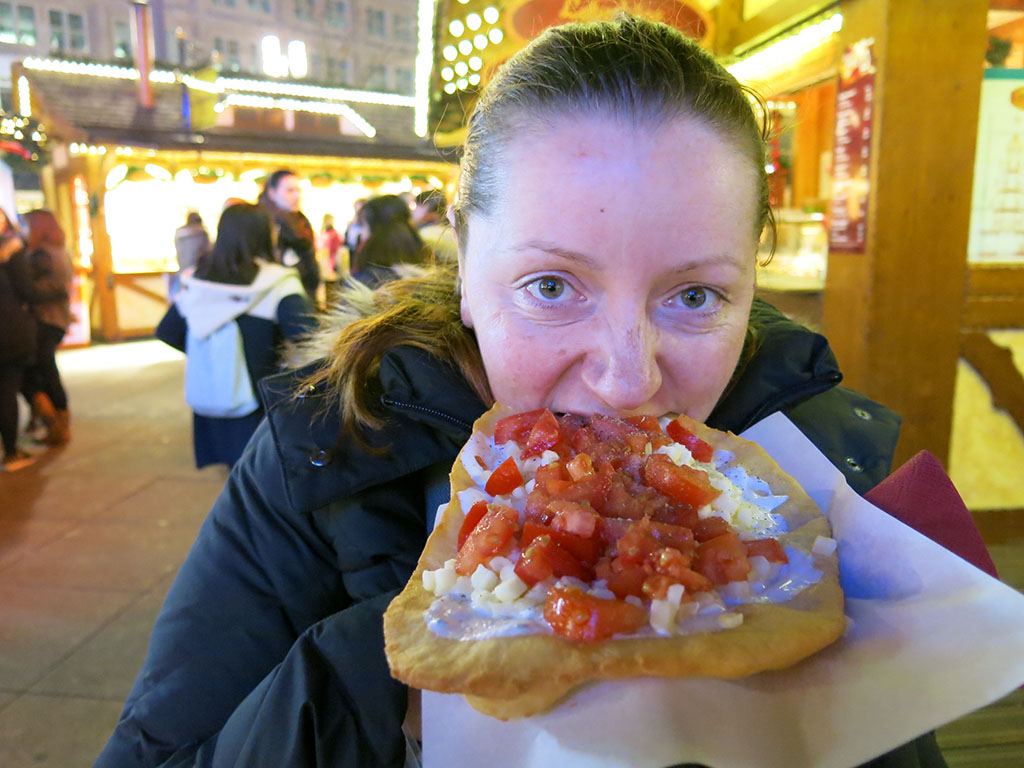 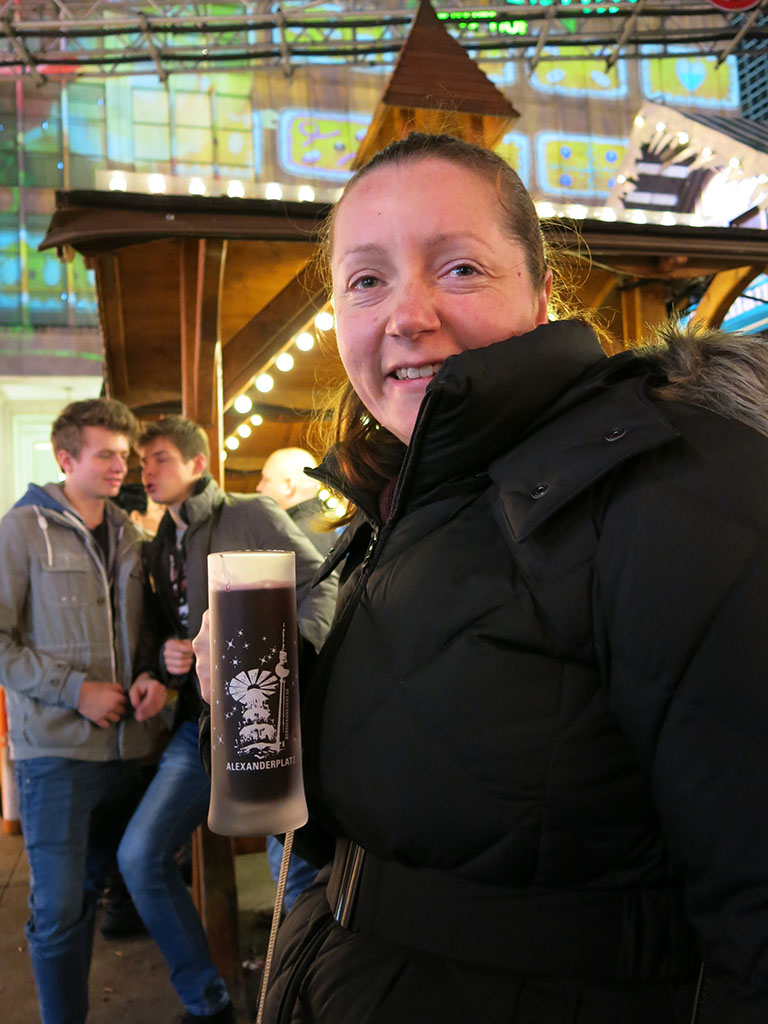 washing it down with some gluhwein

We started with food though, this time bypassing the usual bratwurst for a hue potato cake type thing covered with sour cream, cheese and tomato. Yes, it was as delicious as it sounds! We both got stuck into that and in no time at all it was in our bellies. I washed it down also with some gluhwein, this time with one of their cool glass mugs. I could get used to this. 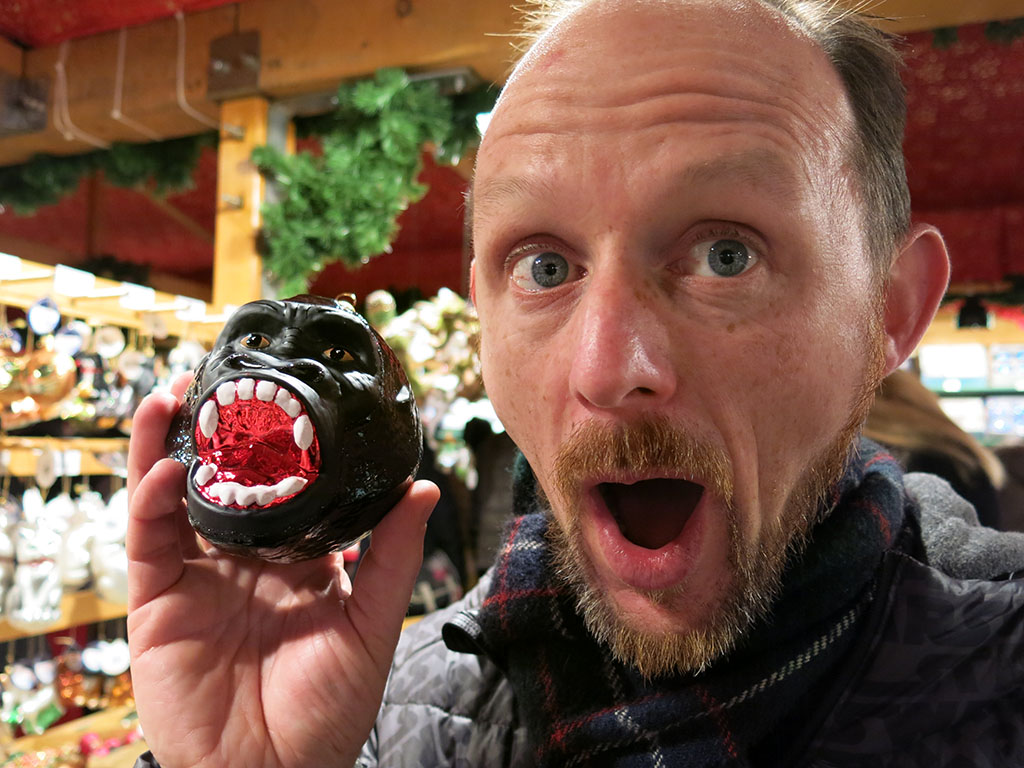 i wash partial to the king kong ornament

So buzzed on food and wine we wandered about. Kate was in her element checking out all the Christmas ornaments, choosing just a couple on this visit. We had scoped out a few markets now, so Kate was formulating her purchases in her head. If it meant more food and wine for me, I was happy. 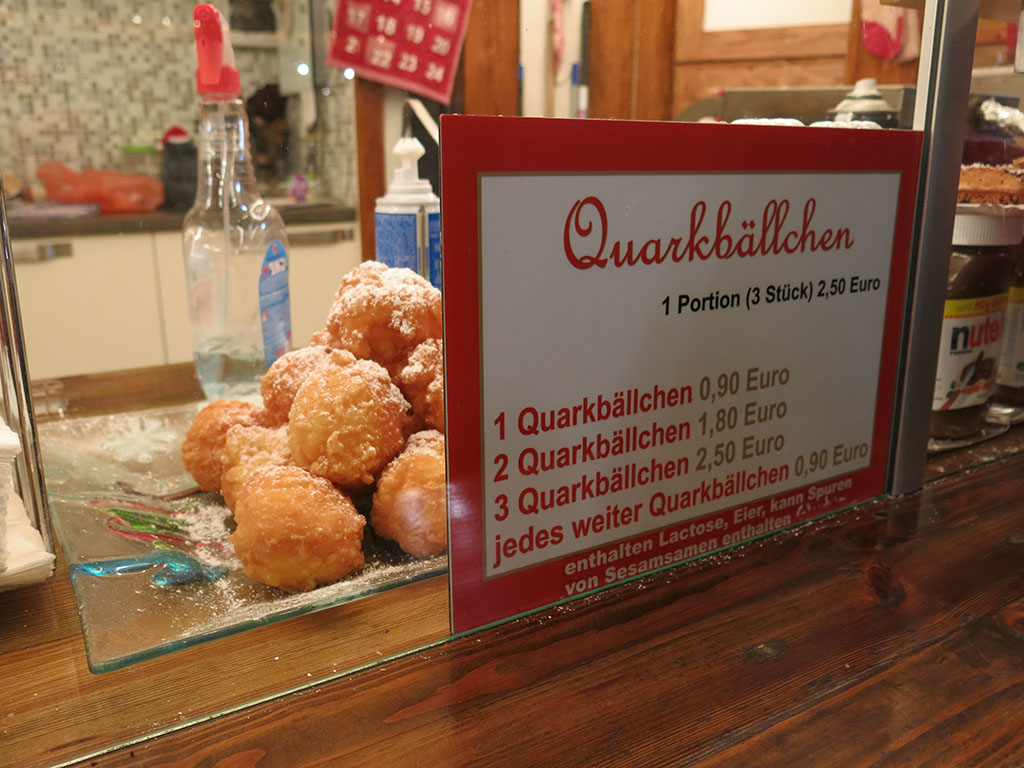 Speaking of food, we decided to get some dessert for our walk back to the train. How could we go past Quarkballchen? What on earth are they I hear you ask! 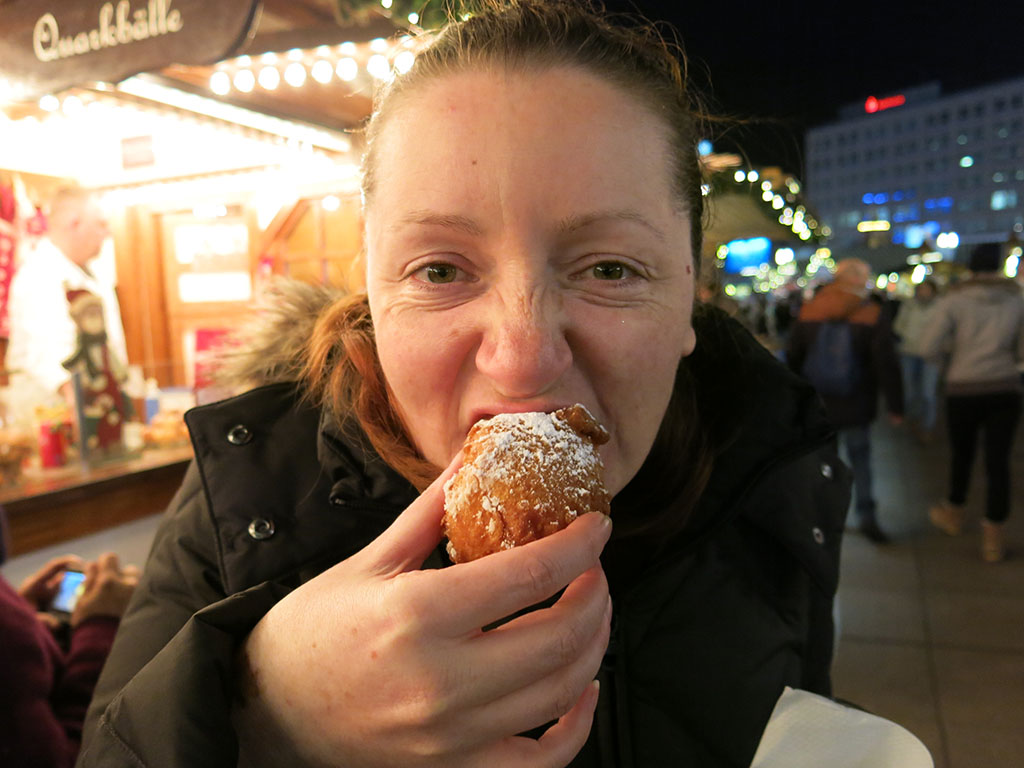 Well, you could probably guess. Basically warm doughy balls covered in icing sugar. What else would they be at a chrissy market?! Mmm… what a sweet end to another fun day.