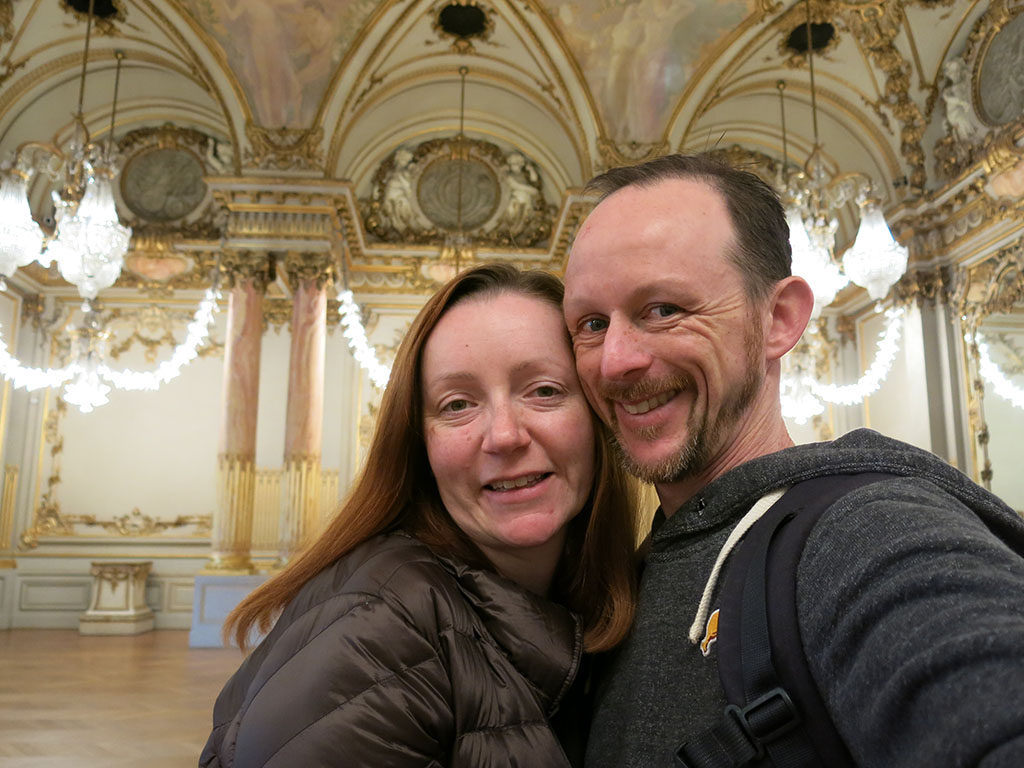 just hanging out in paris

I love Paris. But it has been over 10 years since I was here last. 10 years! And before that I had spent a number of weeks becoming  familiar with the city and every room in the Louvre. So it is a buzz to be back, especially with Kate.

Today was a Tuesday, meaning if we wanted to do galleries and museums, we had to plan ahead. The Louvre for one was closed, but so too many others. And the grim weather forecast meant that indoors was maybe for the best. But never fear, Kate had her plan, so after a slower start (which happens when you are awake at 6am and it is quite dark until about 8am), we headed out for some breakfast. 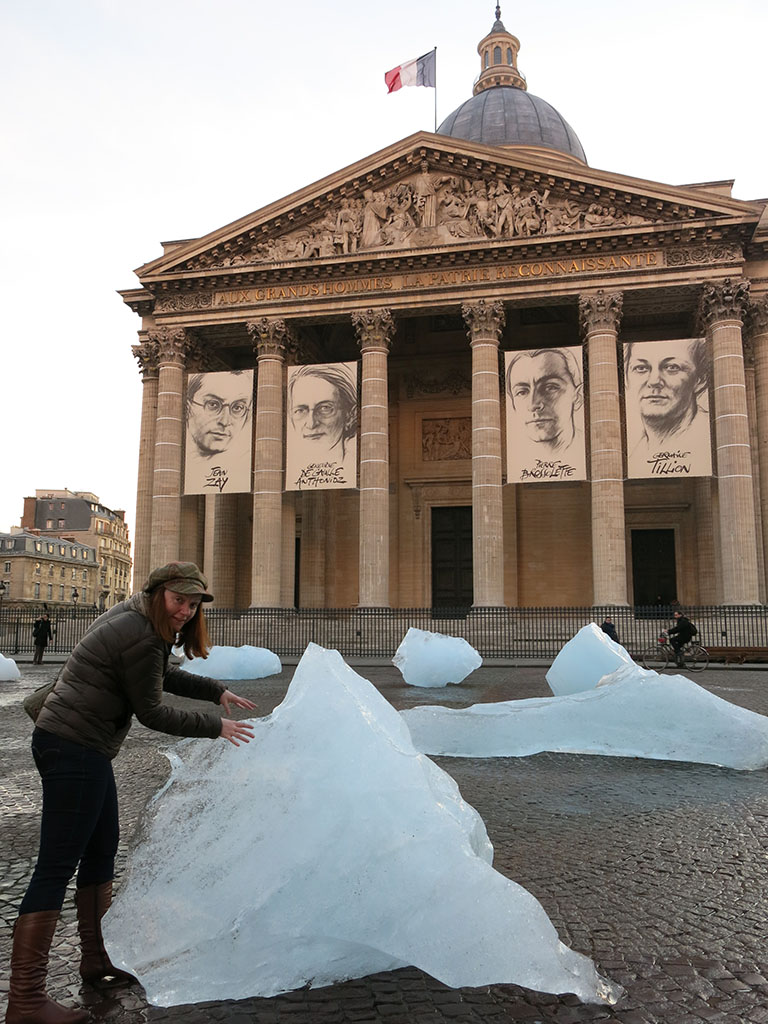 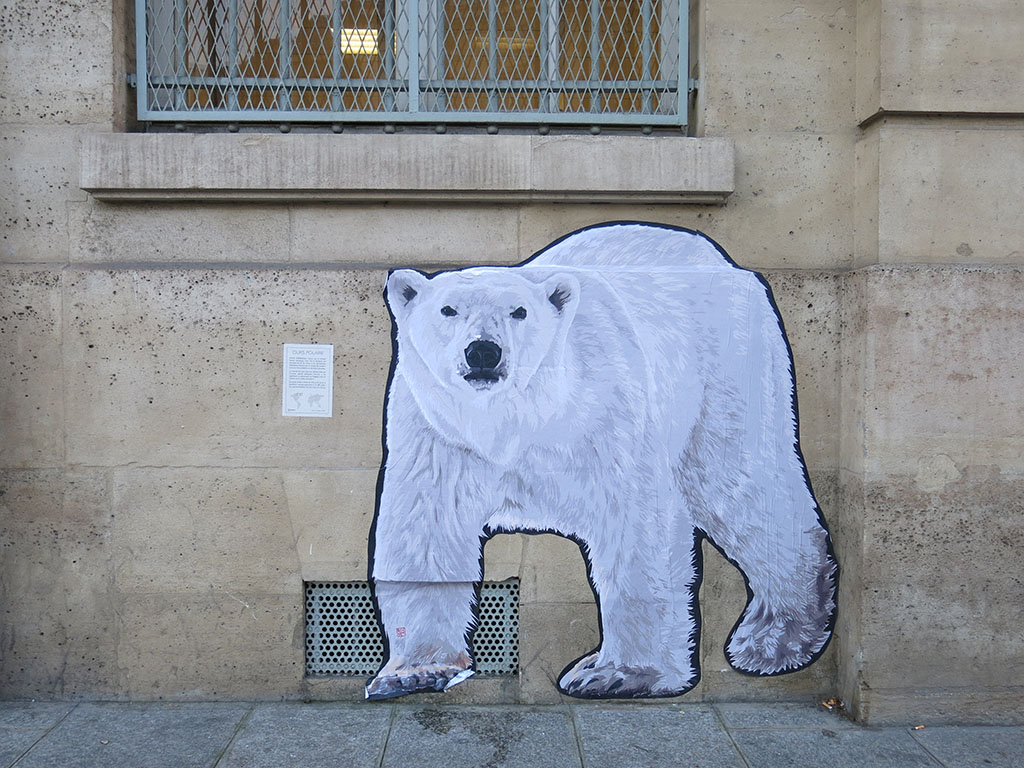 As we left the hotel, it was nice to lay eyes on the Pantheon in the daylight, having arrived after sunset. What was intriguing is that it seemed to be home to some comment on the recent climate summit, with large blocks of ice on the forecourt staying fresh in the brisk morning. Seemed there were also predators around every corner. 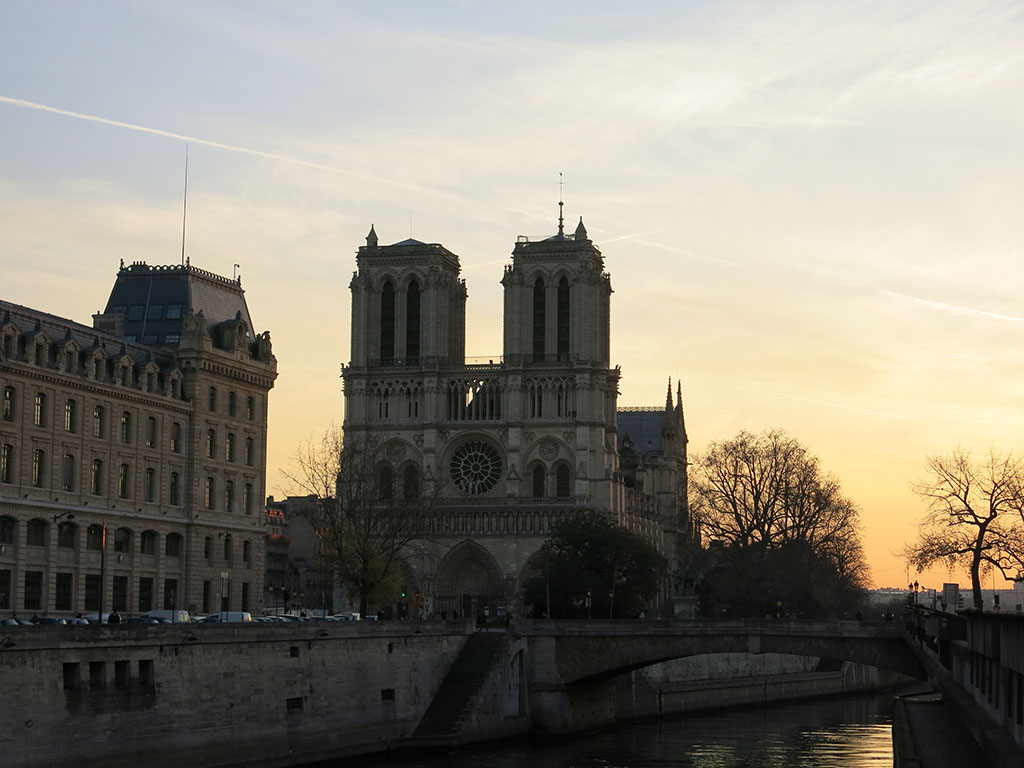 the sun rises over notre dame

So off we wandered, hitting the Seine, and meandering along. The sun was emerging, giving us glorious views of Notre Dame, and filling us with even more reinforcement (as if we needed it) that coming to Paris was a pretty magic idea. 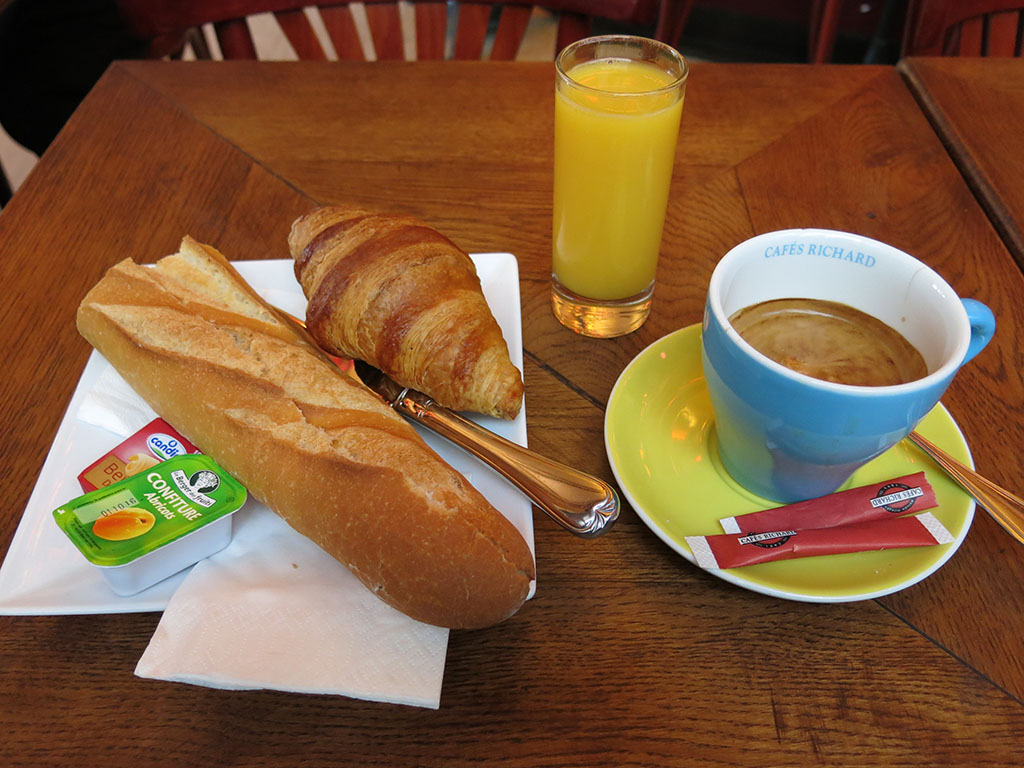 Next a quintessential cafe greeted us on one corner, so in we popped. Here was the first of probably many of this breakfast for the next week. The French staple… coffee, juice, bread and croissant. Mmmm. There is something deliciously elegant in the simplicity. I’m sure in a few days I will be after something different, but for now the novelty was too strong. Kate opted for her go-to, pain au chocolat and she too was soaking up being back in Paris. 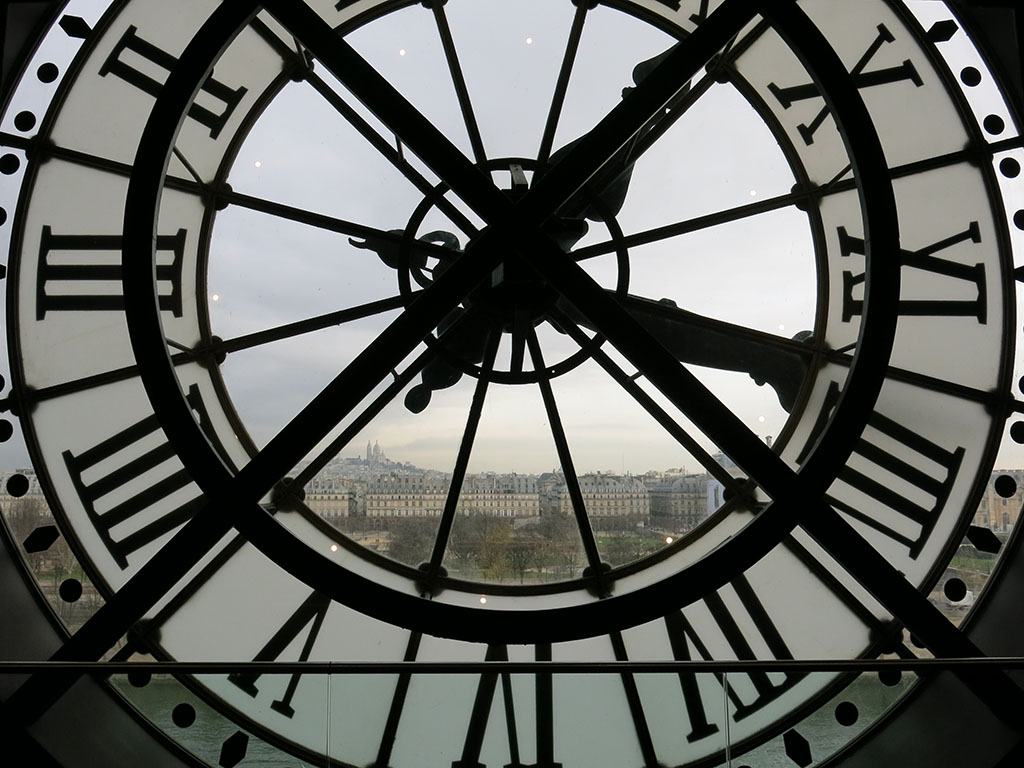 First main stop was the Musee d’Orsay, probably second only to the Louvre here for important works of art (and that is saying something). It is hard to top the rooms full of impressionist paintings as well as the amazingly refurbished train station that houses the collection.  There is just something way too cool about looking through the huge clocks and seeing the Sacre Coeur high in the distance. 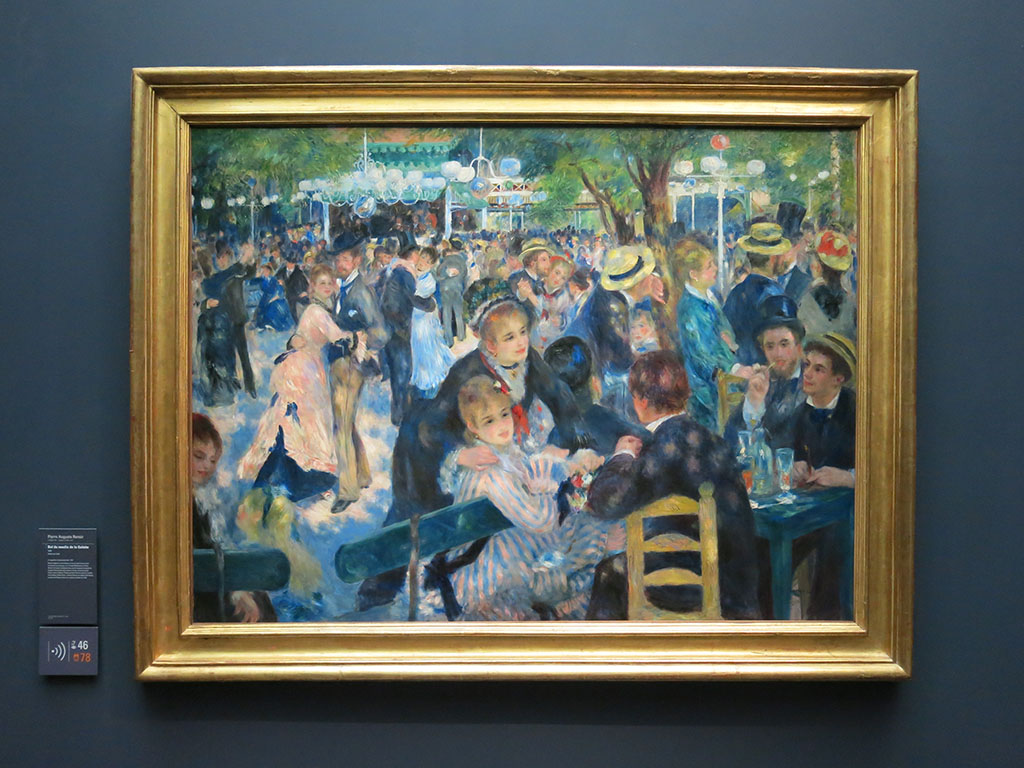 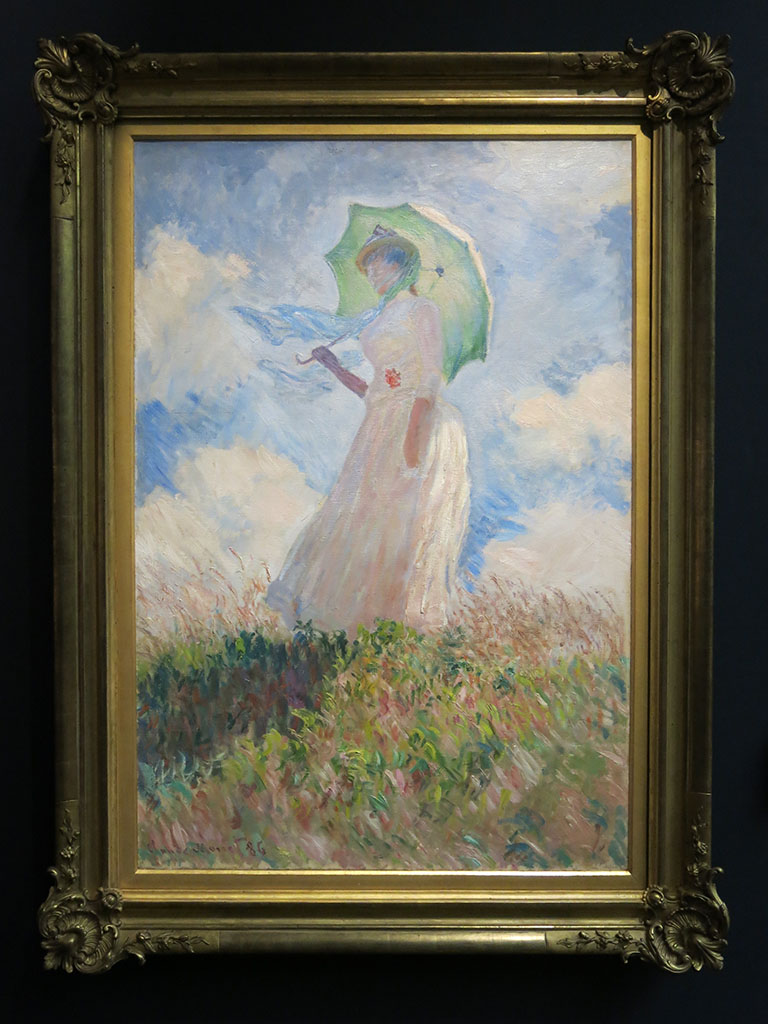 We decided to start at the top, working our way down. Seeing the impressionist works first made us feel at home and continue the buzz of being in Paris. Over the next few hours we wandered through the space, not having to cope with too many visitors, which I imagine will continue to be the same over the coming week. 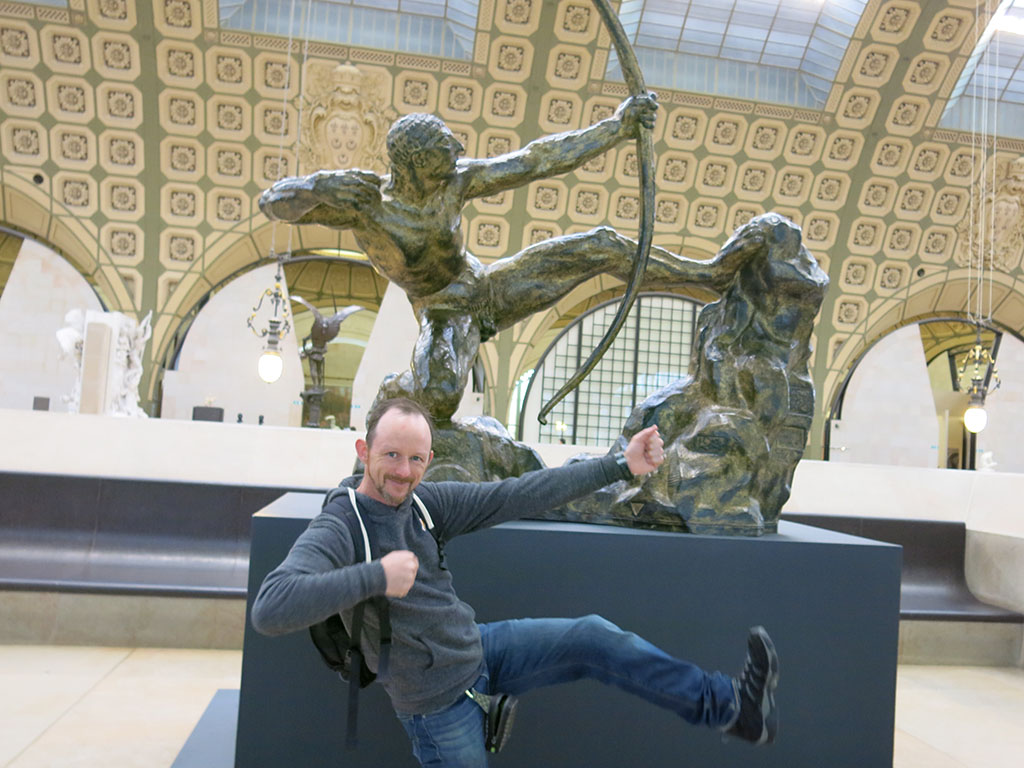 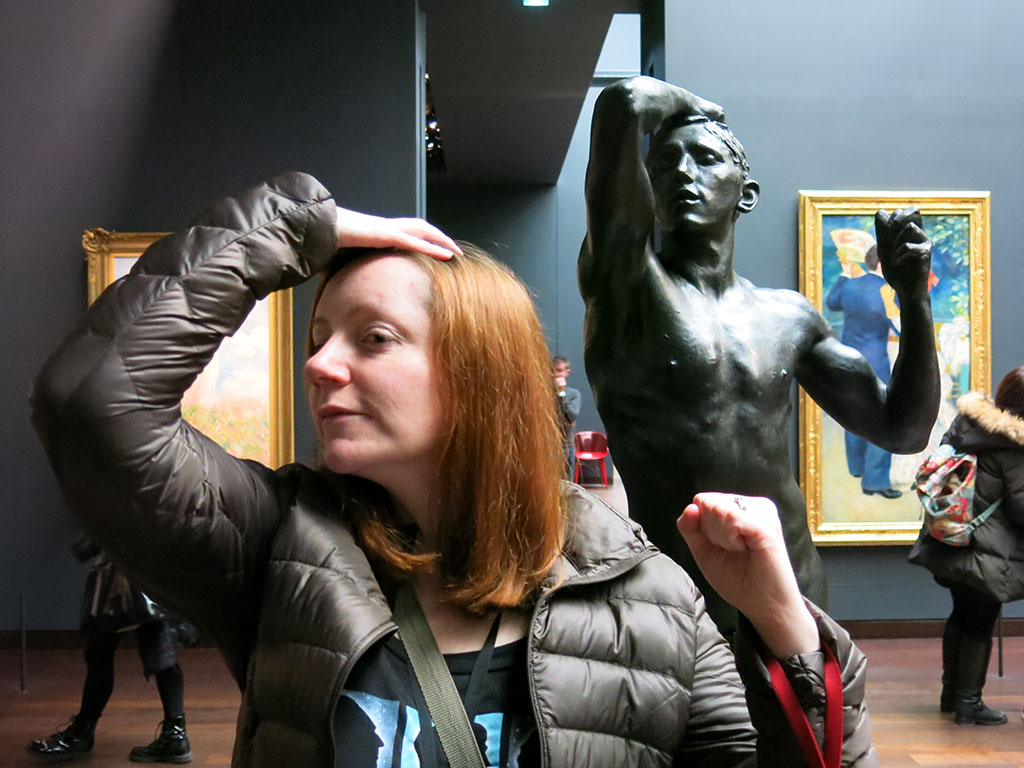 We also started showing our respect for many of the works of art by, well, maybe not showing as much respect as we could. But it is hard to go past many of the statues in particular without paying homage in our own silly way.

Lunchtime had arrived and we decided to head out, hit the streets, and find some food. “Should we pop in here?”. “What about this one?”. “Or here?”… and so it continued as passed cafe upon cafe. Too many decisions! In the end Kate was feeling salady, so we found somewhere for her to put together her own while I jumped on the baguette and we kept wandering to find somewhere to eat. 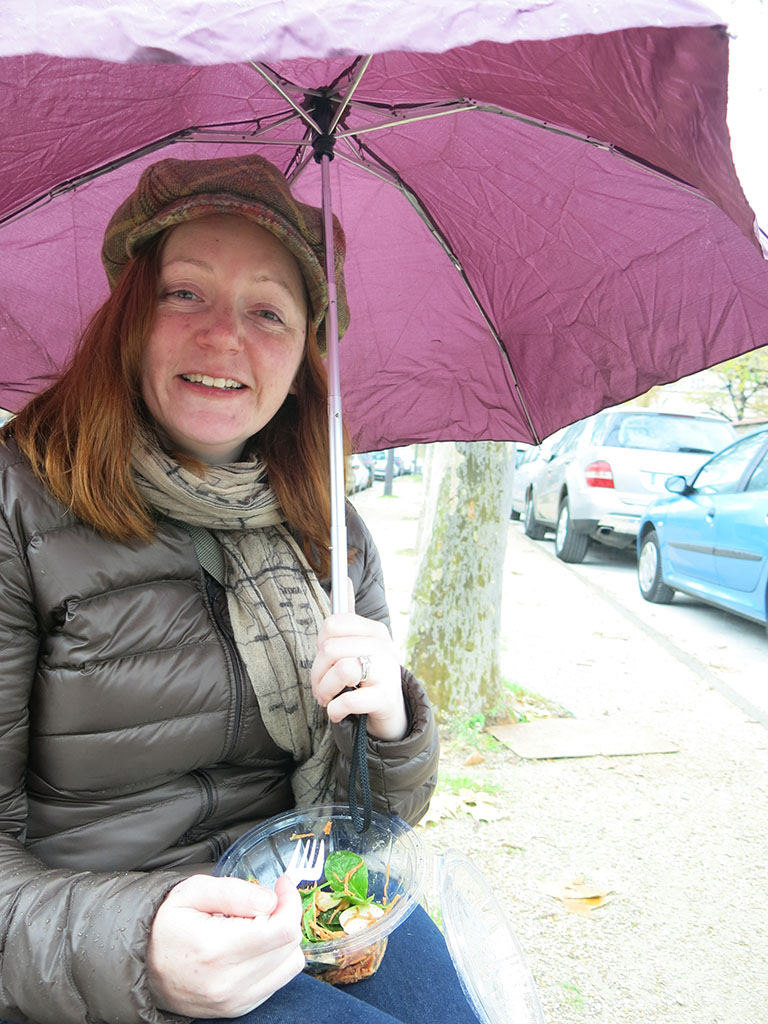 Sadly, it was about now that the forecasted rain arrived and started to dampen our lunch plans. Hhhmmm… where to sit! We were headed towards Les Invalides, and decided to pop down on an indiscriminate park bench by the side of a street to tuck in before the rain got too heavy. Not quite a beautiful Parisian locale, but functional! 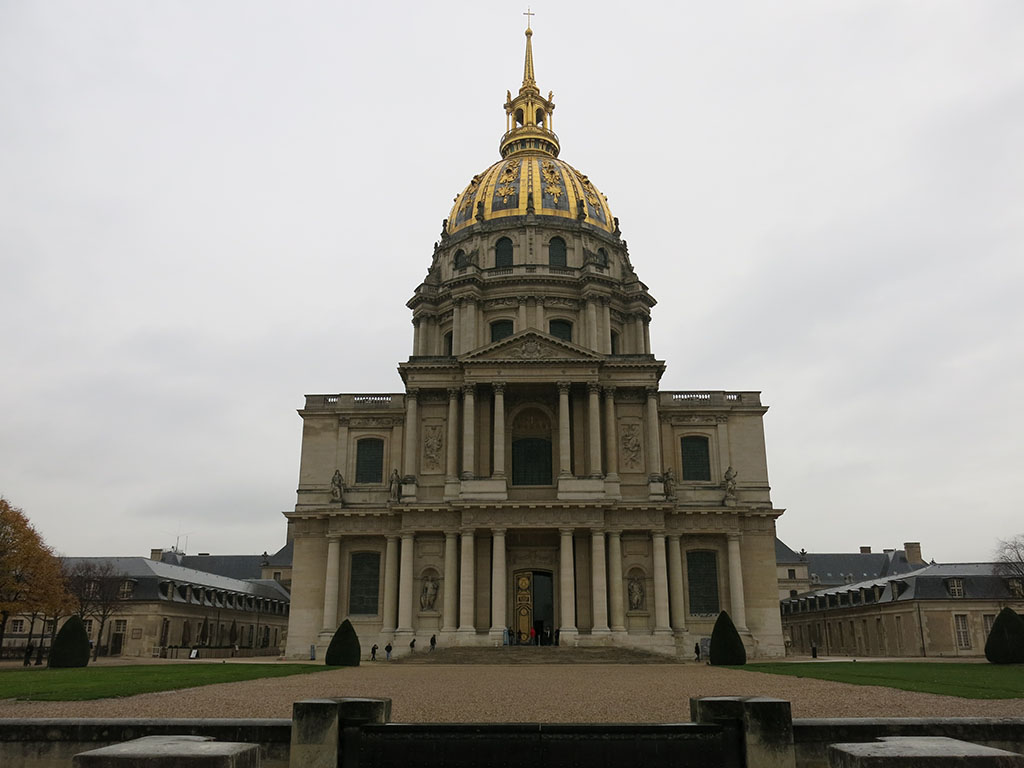 With sustenance to boost our energy, off we continued to the nearby Les Invalides. This is home to the tomb of Napoleon, and while we had both been here before, our museum passes meant the vast majority of sights were now free for us to wander in, so in we went. He we were met with our first real taste of what may become the norm in the city. A number of armed guards, checking bags and inside our jackets before entering. While getting into any major museum and public space is always going to have its checks, this seemed like the ante had been upped. 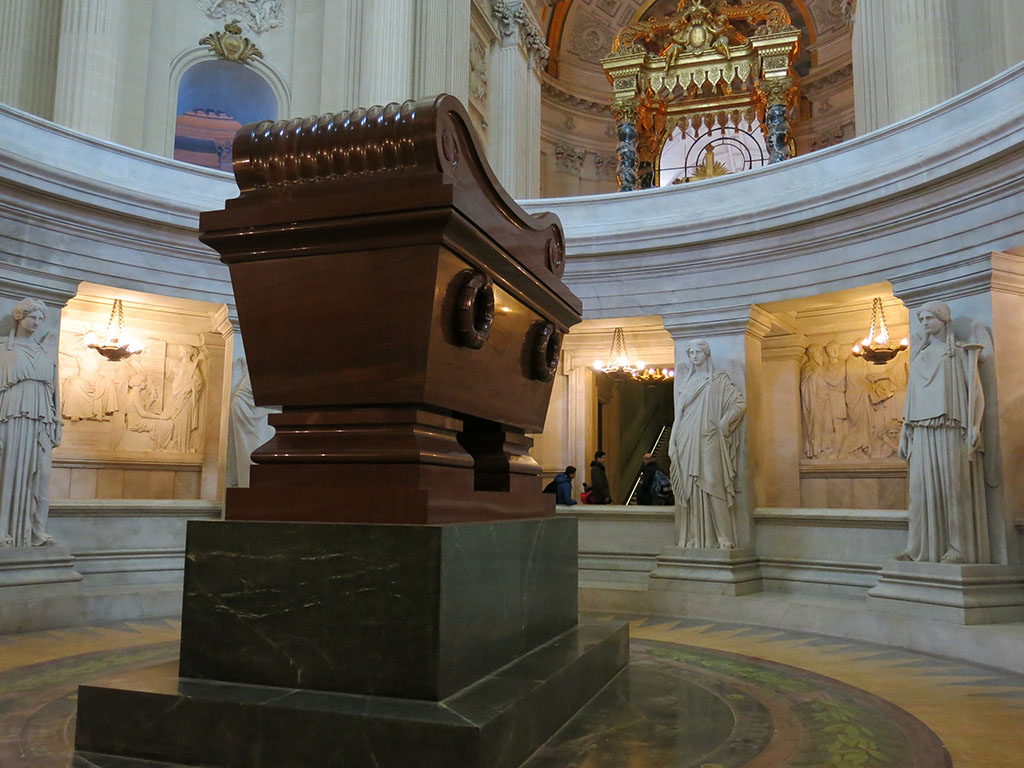 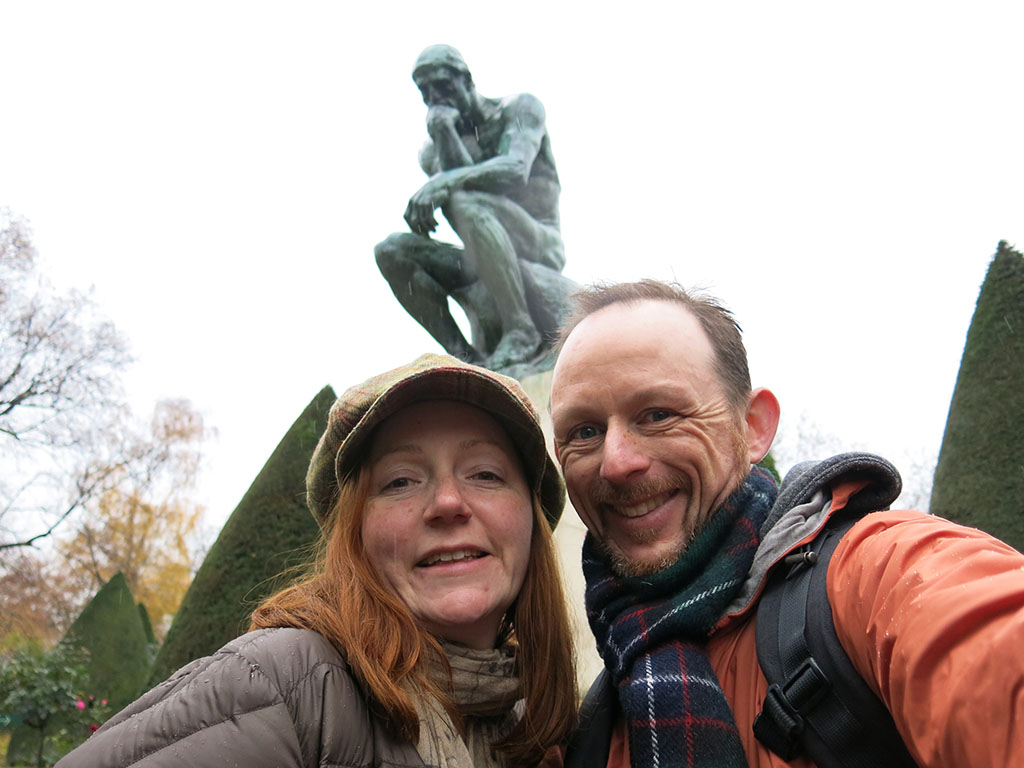 We did a quick wander around and kept moving. In many respects the main reason for visiting Napoleon was that Les Invalides was right near a museum that was a huge favourite of both of us, the Musee Rodin. It had recently just gone through a major refurb, and the entire space had just reopened. Win! Alas, the rain was making our visit difficult to enjoy and soak up properly (ha, soak… see what I did there) but in we went anyway, starting with the displays inside an old hotel that resides on the grounds. 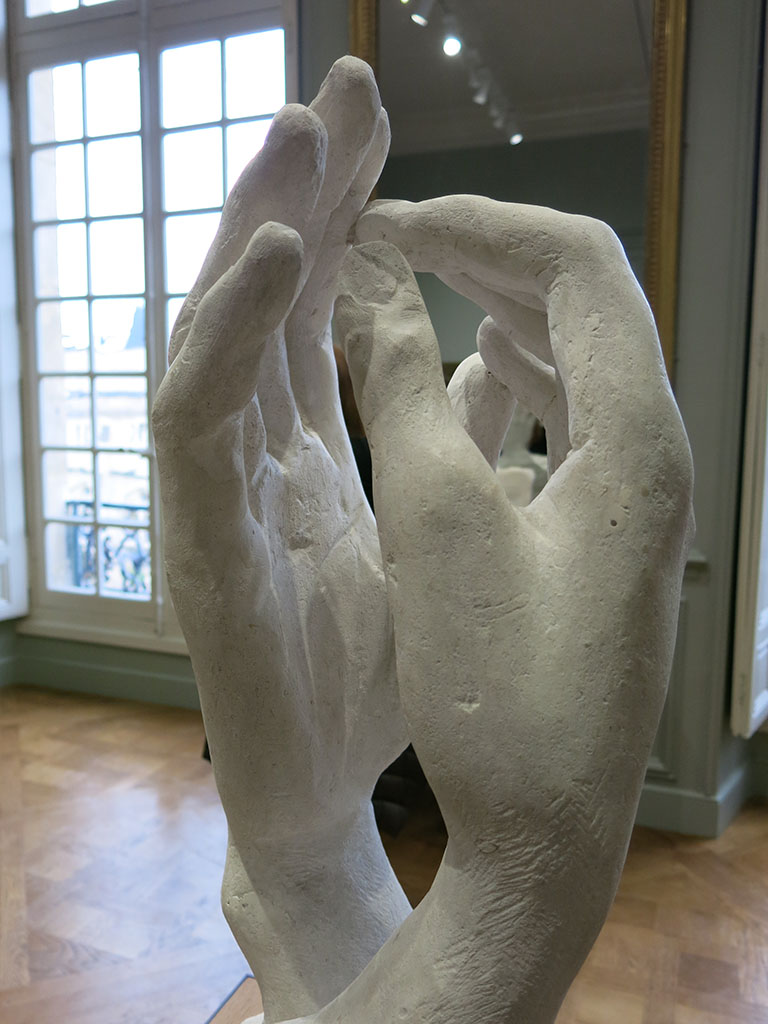 His work is incredible, and it is always so cool to see not only the works but the moulds and the entire creative process.

We were starting to hit the wall a little (going to the other side of the world will do that to you), so after making our way through the indoor part of the museum, we decided to give the gardens, housing his larger works, a miss for the time being. The relentless rain helped us with that decision too!

So off we tramped, back toward a Metro station. Of course, on our way we walked past a gorgeous looking patisserie and couldn’t help ourselves. Kate got her eclair (as I could have guessed) while I went a little rogue and got a big slice of flan. Delicious! 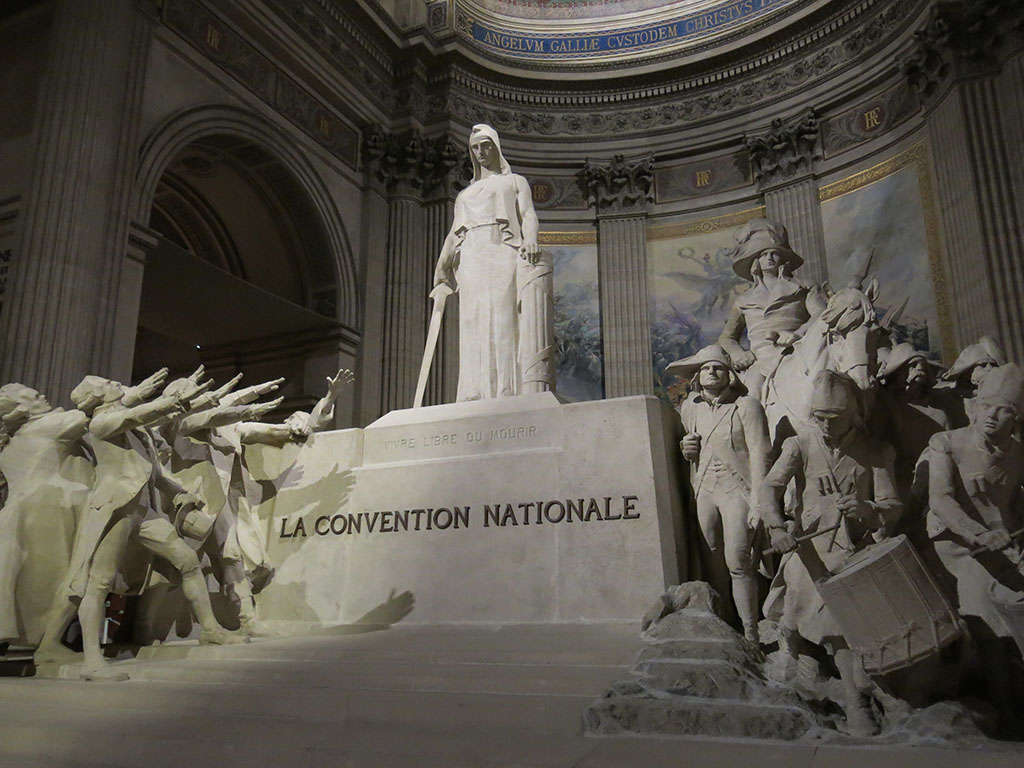 It was approaching 5pm by the time we arrived back at our hotel. We were both pretty tired, but decided to wander into the Pantheon since we had some time up our sleeve before it closed. Housing crypts for many distinguished French men and women, it is cool to have a quick wander in the depths of the old church. While many were unknown to me (possibly showing my ignorance), there were some that have proven to be quite important to me and my study & work, such as Louis Braille, and Marie and Pierre Curie. 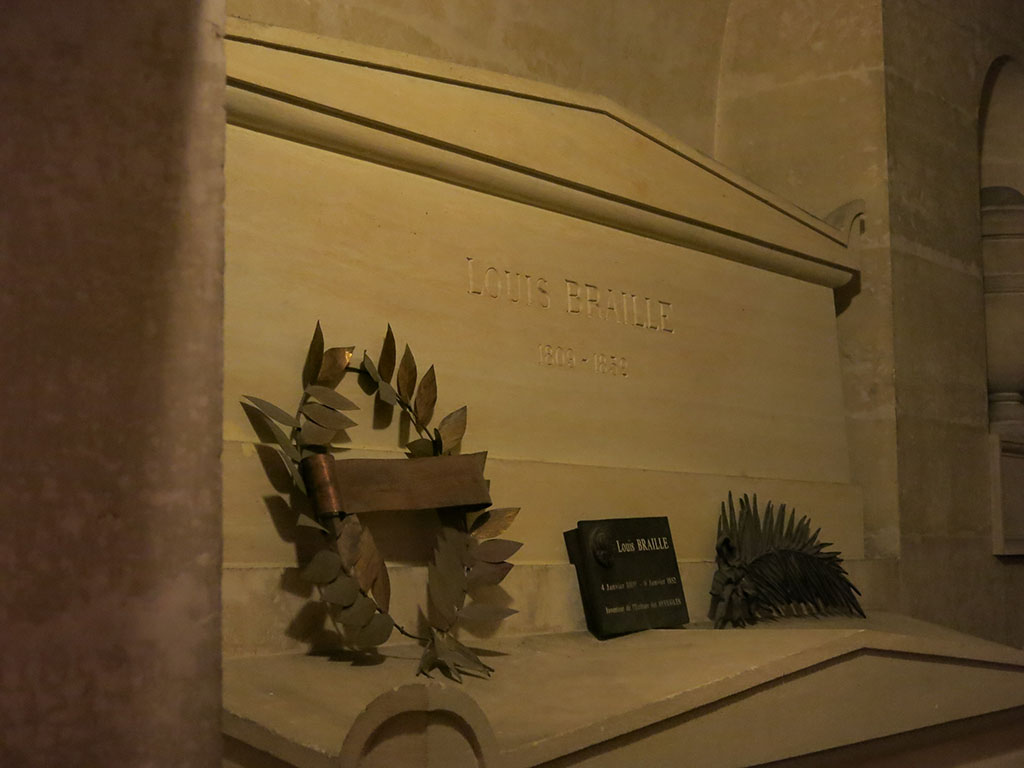 Phew! Our first day was nearly done. We were both pretty tired, so off it was to a nearby cafe for some dinner (still happy hour!) and then to rest up after our first day. Ah Paris. I’ve missed you.