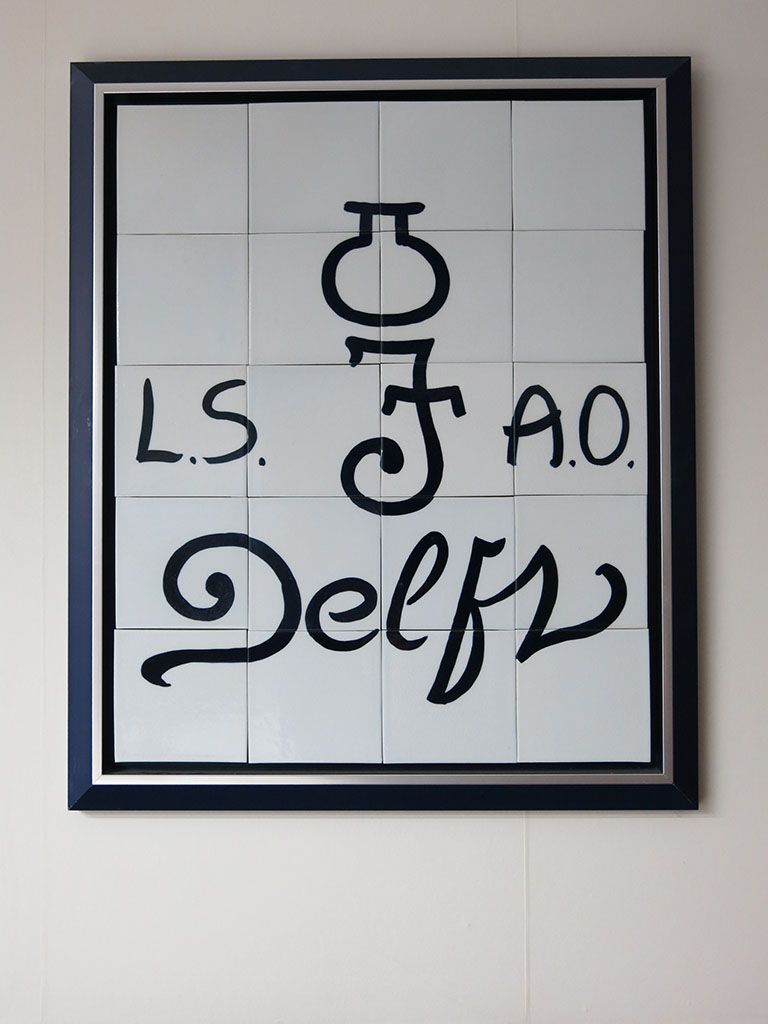 kate is in heaven

As you could tell from my previous posts, we actually have had a fairly luxurious time in Amsterdam. Luxurious in that we didn’t feel rushed to see the sights in Amsterdam we wanted to. So today was about escaping Amsterdam to explore some more of the nearby Netherlands.

Who am I kidding? There was no way Kate would have us coming to anywhere in the Netherlands and not doing a day trip to Delft. Conveniently it was only an hours train ride away, so slightly earlier morning than normal and we headed to central station and jumped on a train.

So why Delft? To be honest it wasn’t necessarily on my radar. So you may be able to start guessing something about the small town. Yes, it supposedly had a lovely town centre, but what it is most famous for is the distinctive white and blue handcrafted and painted pottery. Amsterdam was full of tourist places selling supposed Delftware, but the reality was that most was cheap knock-offs, and the genuine stuff comes out of one main place still located in Delft. Knowing that you could tour the factory/workshop, Kate wanted to visit. Why not get out of the city for the day? 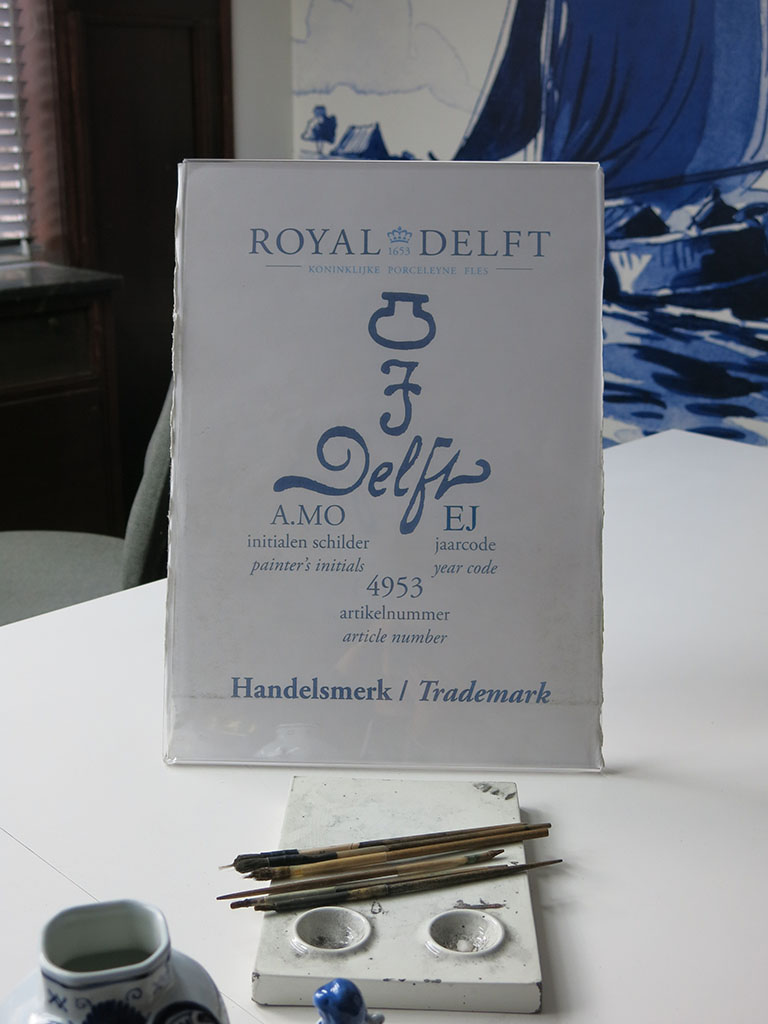 An easy train ride later (with free wi-fi… love these trains!) we were there and casually wandered from the train station to the nearby Royal Delft factory. Located in a nondescript part of the town, it was nice and quiet when we arrived. Given it isn’t a huge space, that proved to be a good thing. Things kicked off with an informative, if slightly cheesy film about Royal Delft… the history of ceramics on the town, the downturn in demand, getting the “Royal” part of their name, and surviving to be the preeminent manufacturer of the signature pottery. 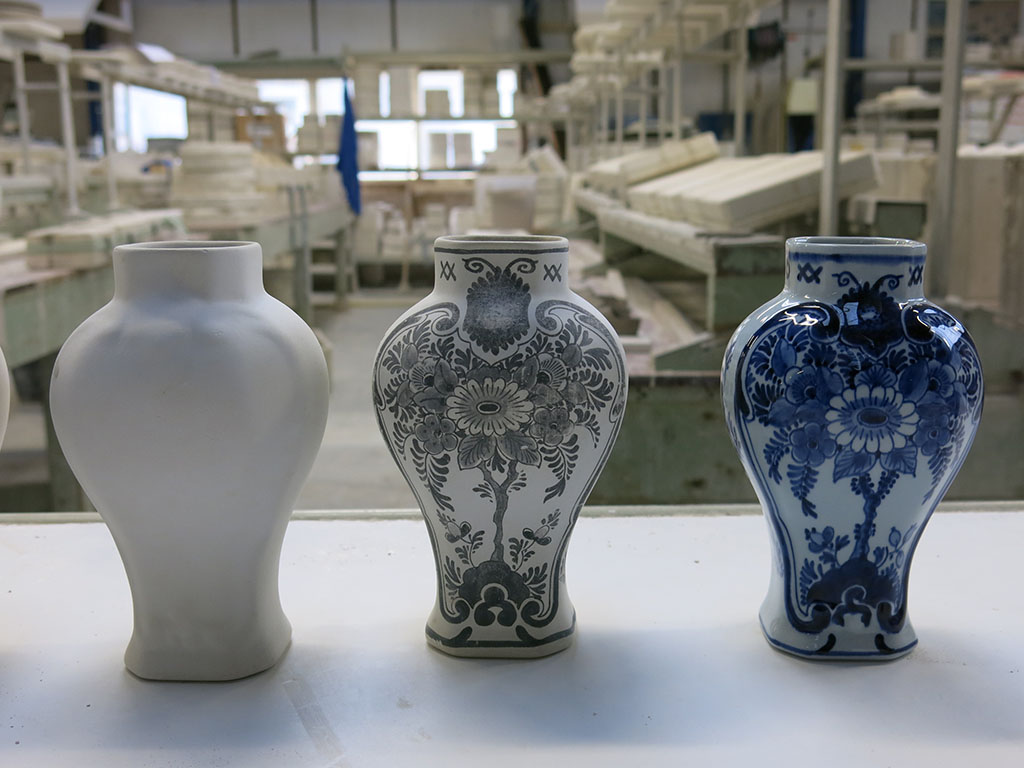 The vast majority remains hand made and importantly hand painted. That means that each piece is slightly unique and is signed and dated on the bottom before firing. As a consequent it sports such price tags, but not overwhelmingly expensive for handmade and unique pieces. 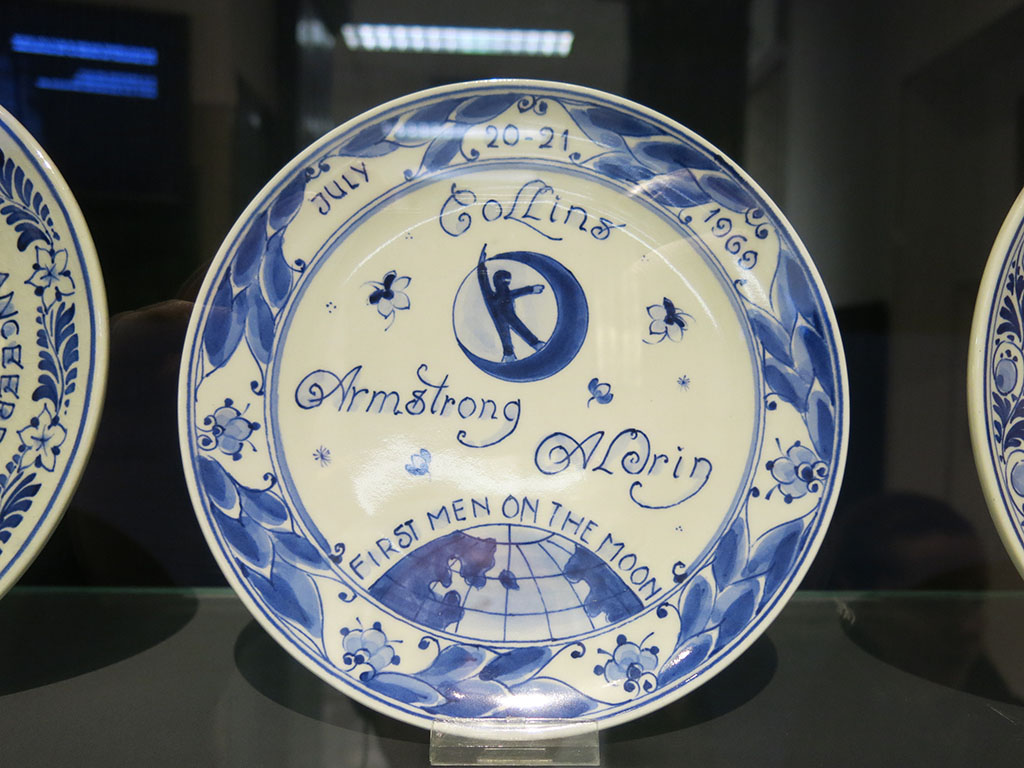 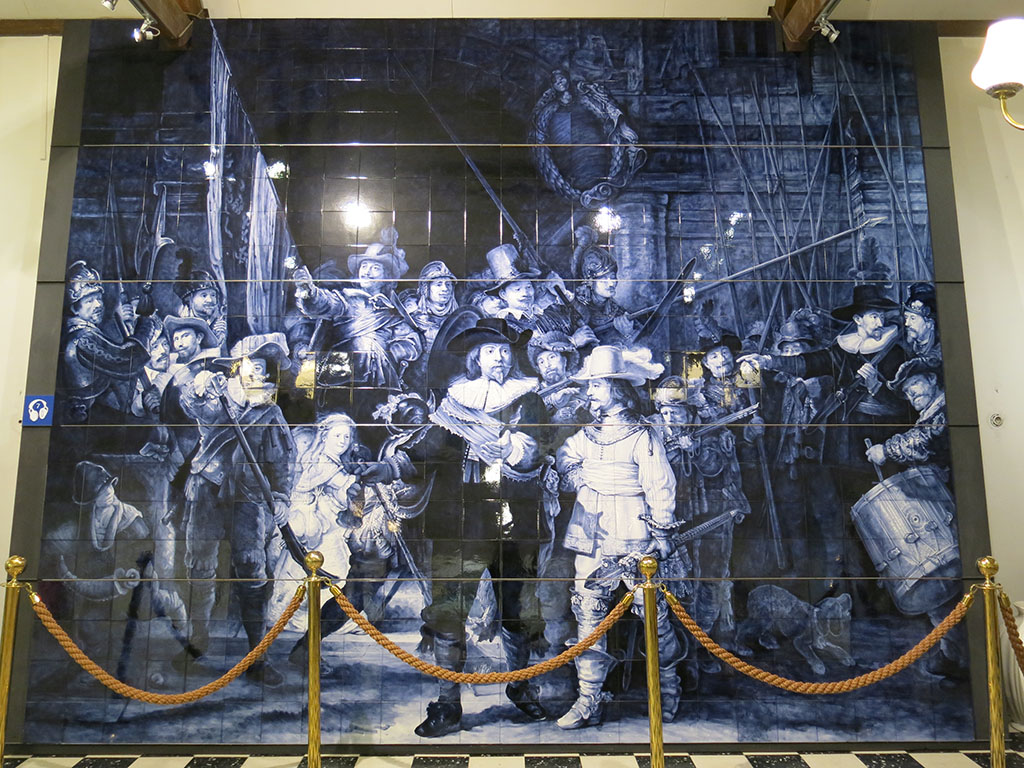 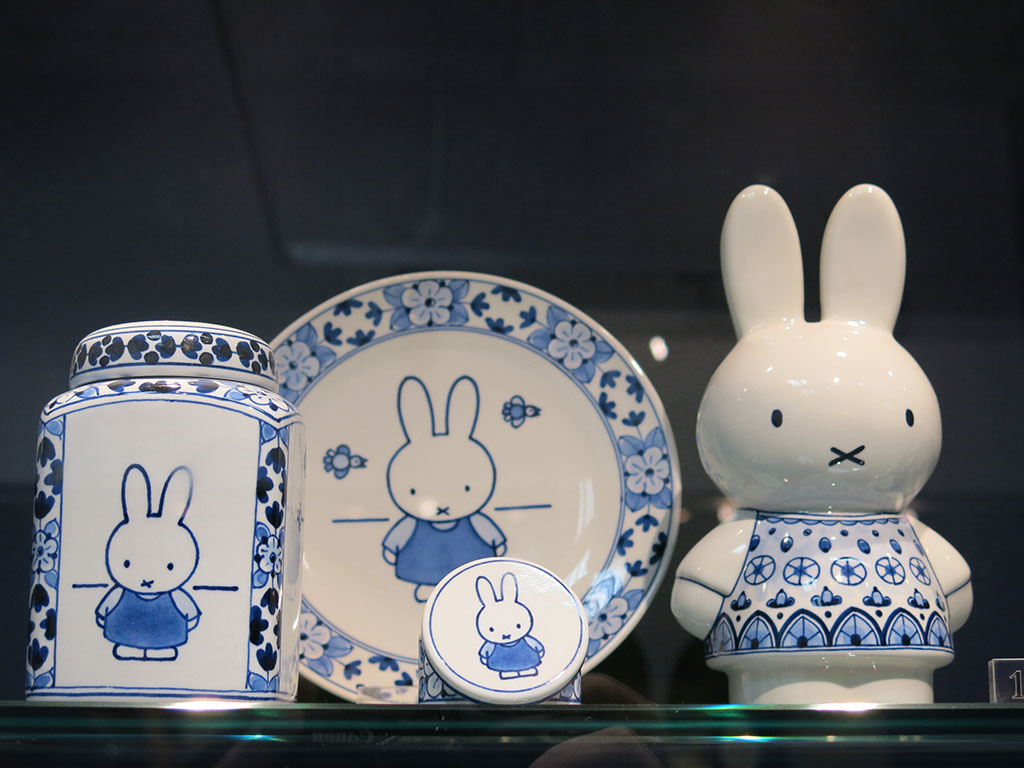 two dutch icons wrapped up in one

The Royal Delft Experience was simply self-guided tour through and while not huge was jam packed with examples of their work through the ages. Lots of commemorative royal pieces, as well as pieces intriguingly for a umber of other historical events such as landmarks in space travel. I want a man lands on the moon plate! 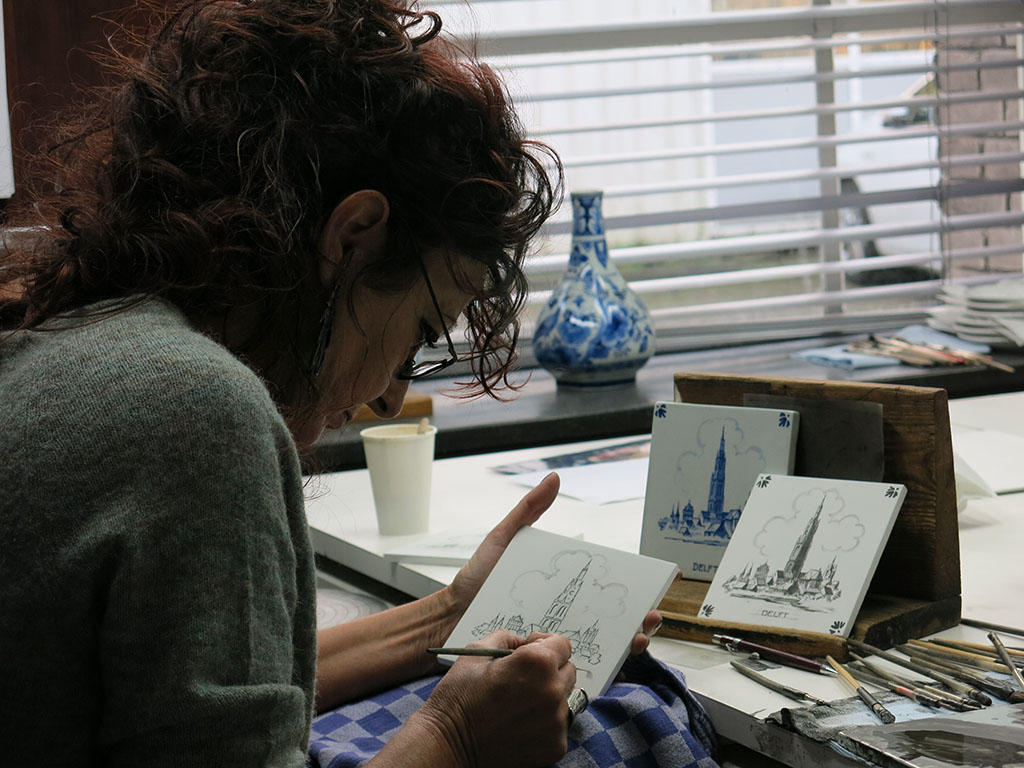 hard at work (for us tourists)

There were also different things to see along the way, such as one of the artists at work (“oh great”, she probably thought when she arrived to work… “I get the tourists today!”). Here you can see how it starts with the part-fired pottery, and painted with a seemingly black ink, that takes on the famous blue once the final firing happens. Each piece apparently undergoes inspection before being put on sale and not everything passes the cut which I guess accounts for the premiums attached. 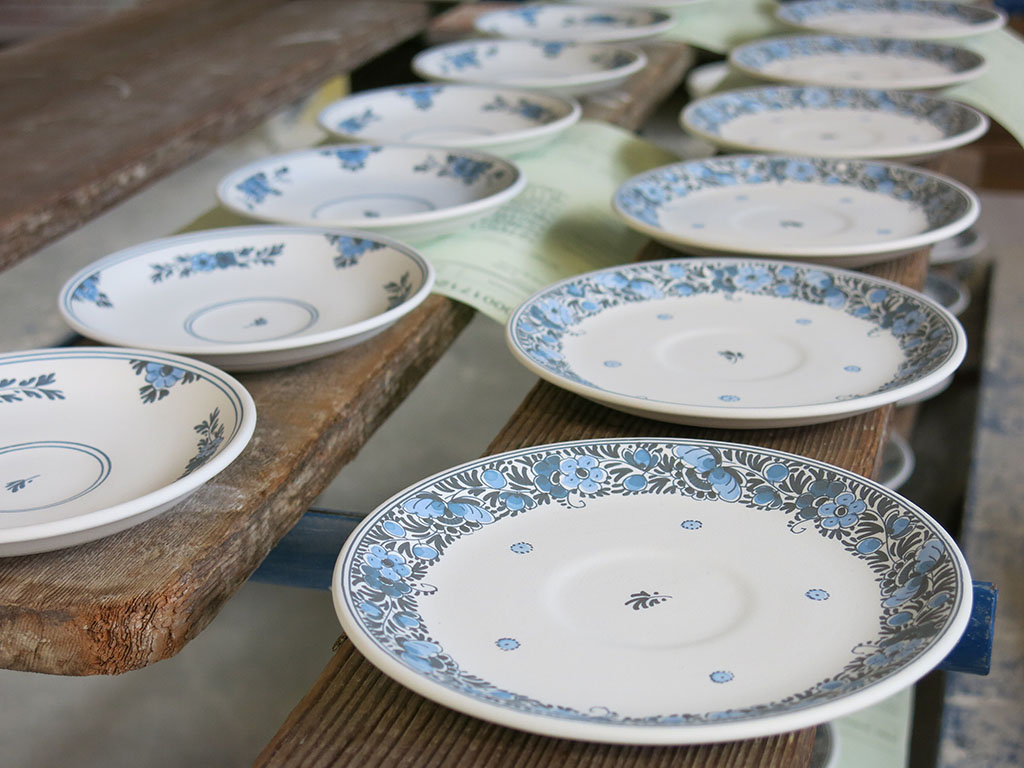 waiting for the kiln 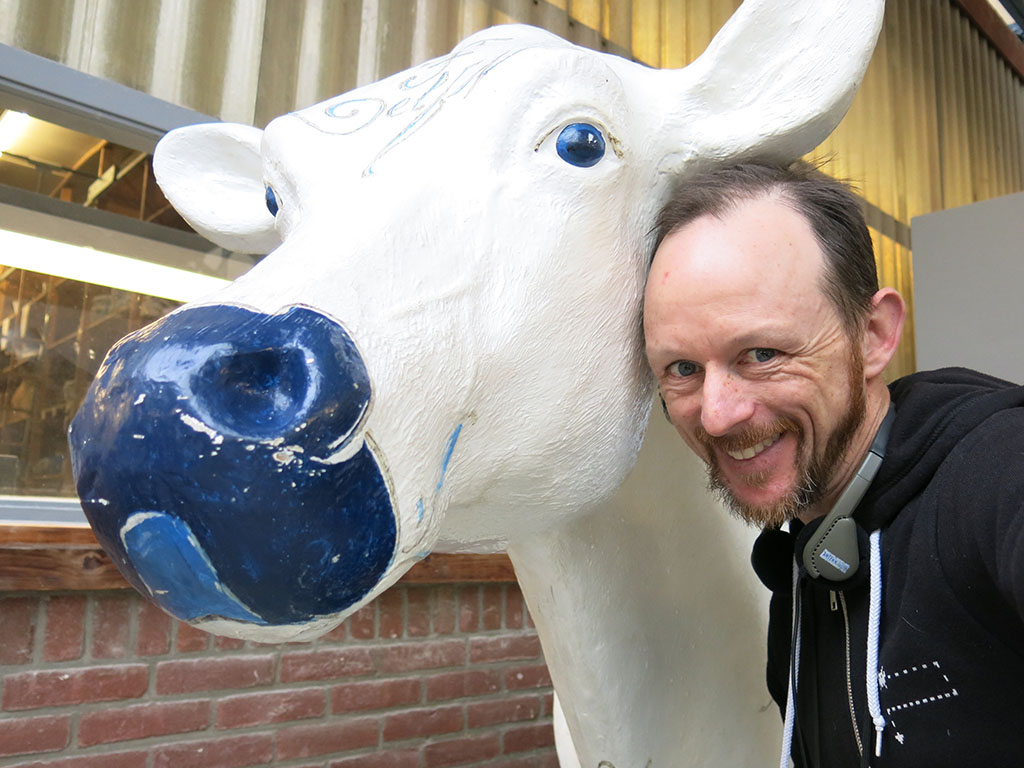 We also wandered through the factory floor, seeing all the pottery either waiting to be fired or waiting to be painted on. It was actually all very casual, with the visitors to the factory being able to wander fairly easily and even chat to some of the floor staff as they work. I even came across this random cow.

Obviously the experience exists through the gift shop and Kate was in heaven. Overwhelmed by choice, but heaven nonetheless. The advantage of visiting the factory is the chance to pick up factory seconds and huge discounts. In most cases it was impossible to see why it was discounted except for the tiny mark on the bottom they make for themselves. how would Kate decide?! In the end she selected a couple of small pieces and she was a very happy chappy. 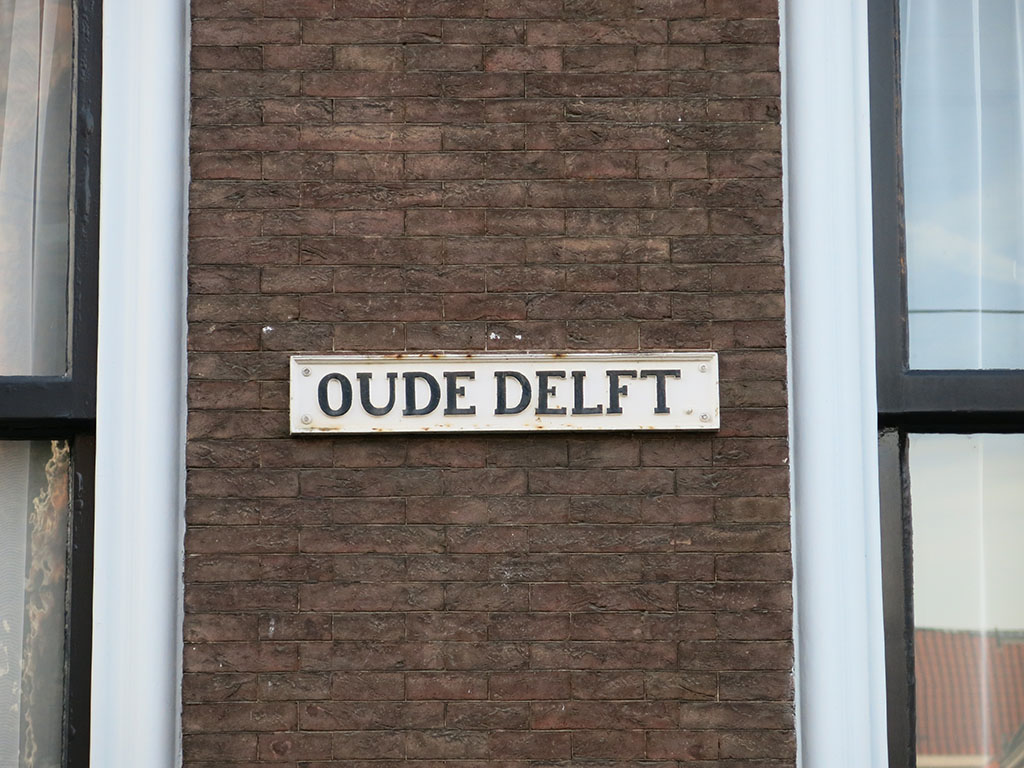 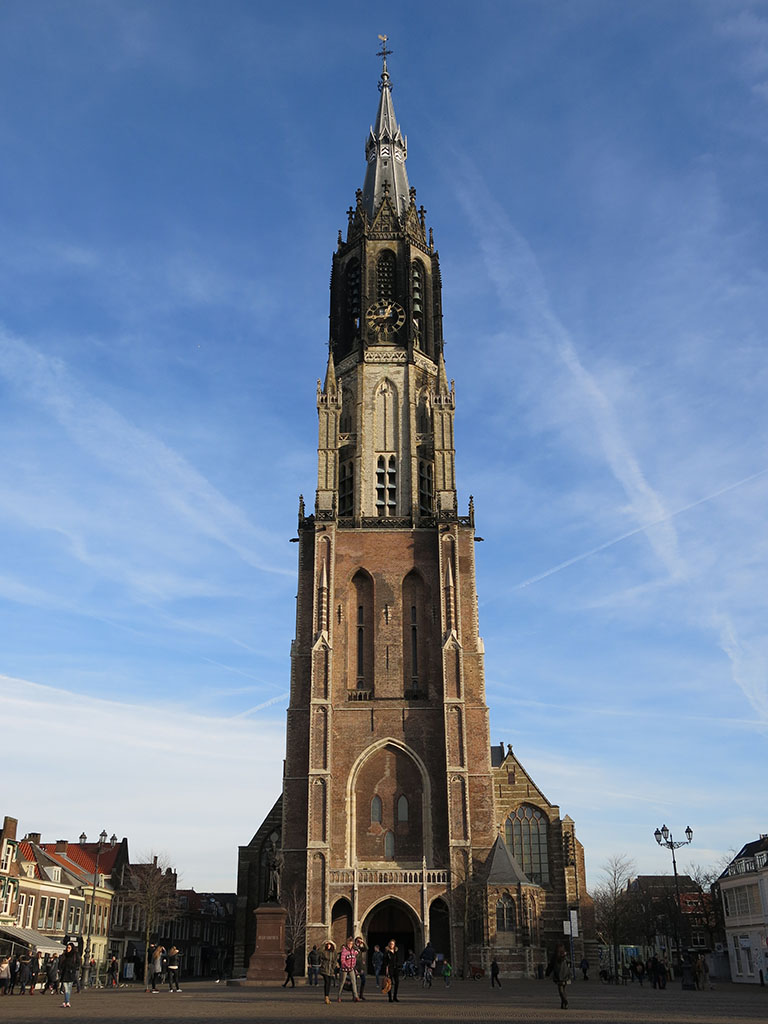 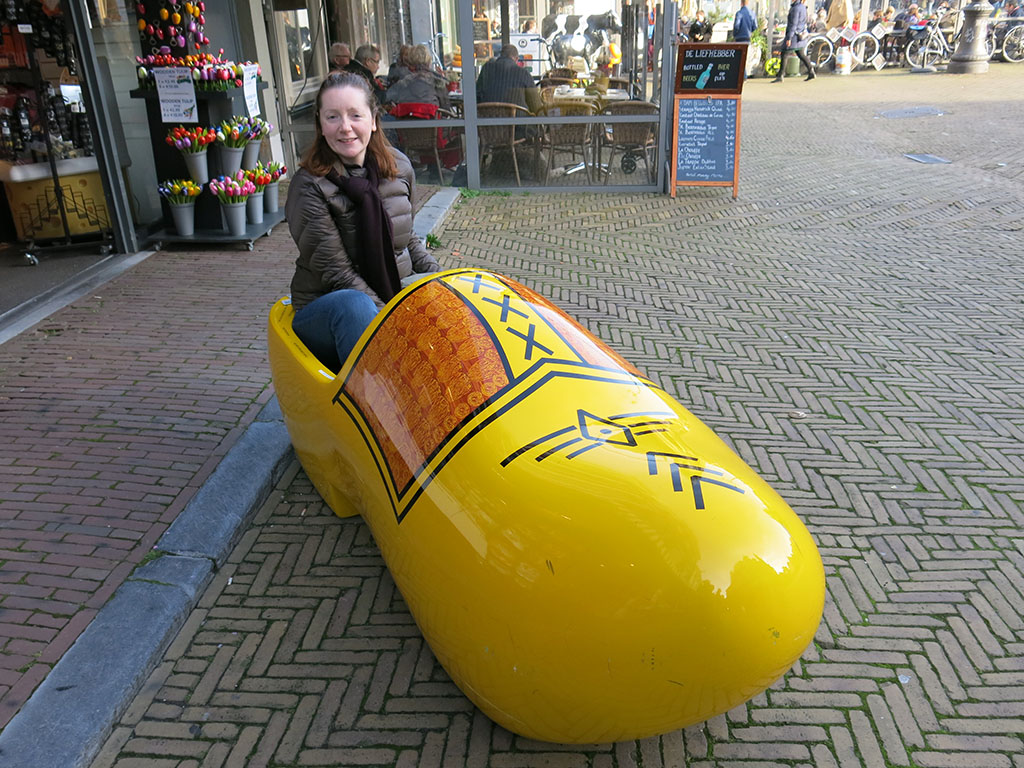 With that done we wandered into the town centre to soak up a small Dutch town. The most important things to see as you could probably guess were the town squares and churches (kerks). Delft was no exception. 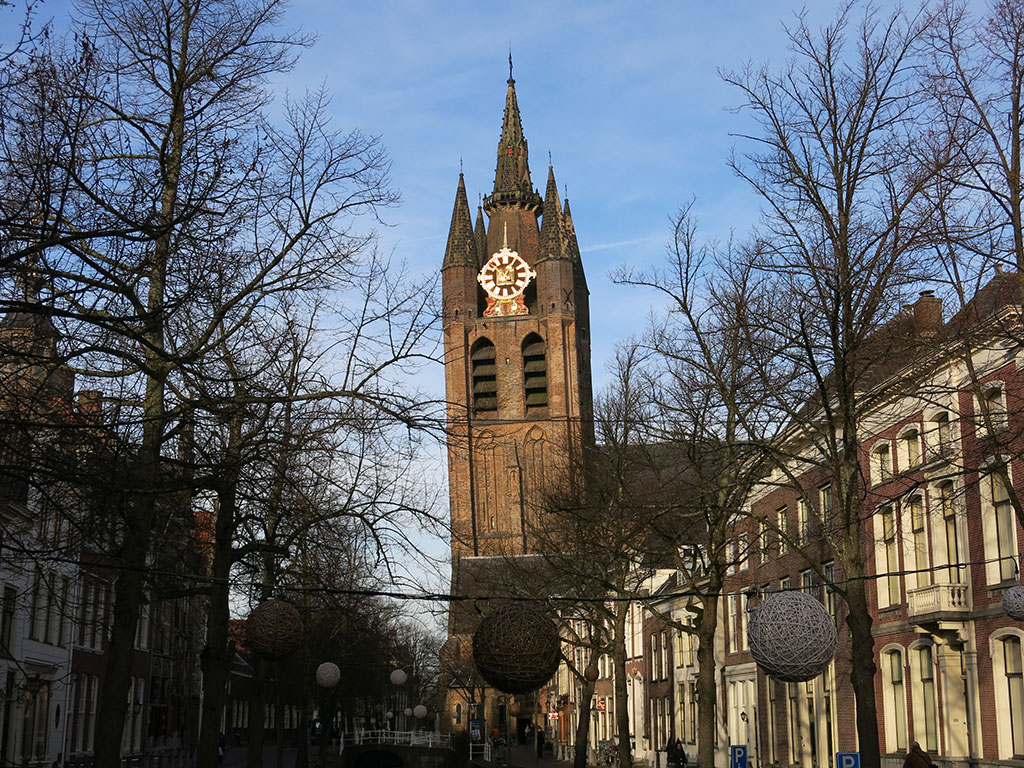 Delft was well known for one church in particular, the Oude Kerk. Its main tower leans about 2 metres off the vertical. When it was built in the 1200’s, it started leaning as the foundations were not good enough. Did they stop? Nope! They kept going trying to compensate. But to this day it has a very visible lean. I guess if it hasn’t come down in almost a millennium, what’s the problem hey? 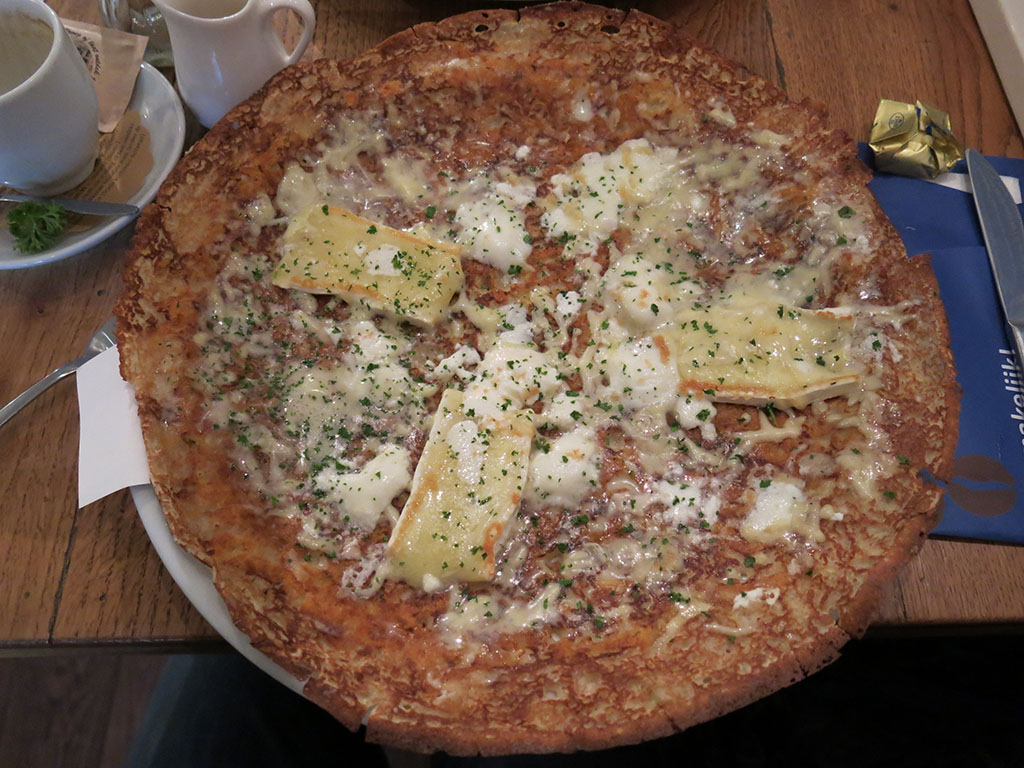 It was time for lunch and the idea of huge pancakes was too good to pass up. We popped into the busy pancake house and ordered up. I went for cheese, cheese, and more cheese and when it arrived I knew I ordered well. Check it out! Mmmm… delicious. Kate’s was a bit of alright too.

With full bellies we wandered back to the train station. Rather than head back to Amsterdam, we thought why not jump out at another stop? Especially when the first place on our way back was The Hague. 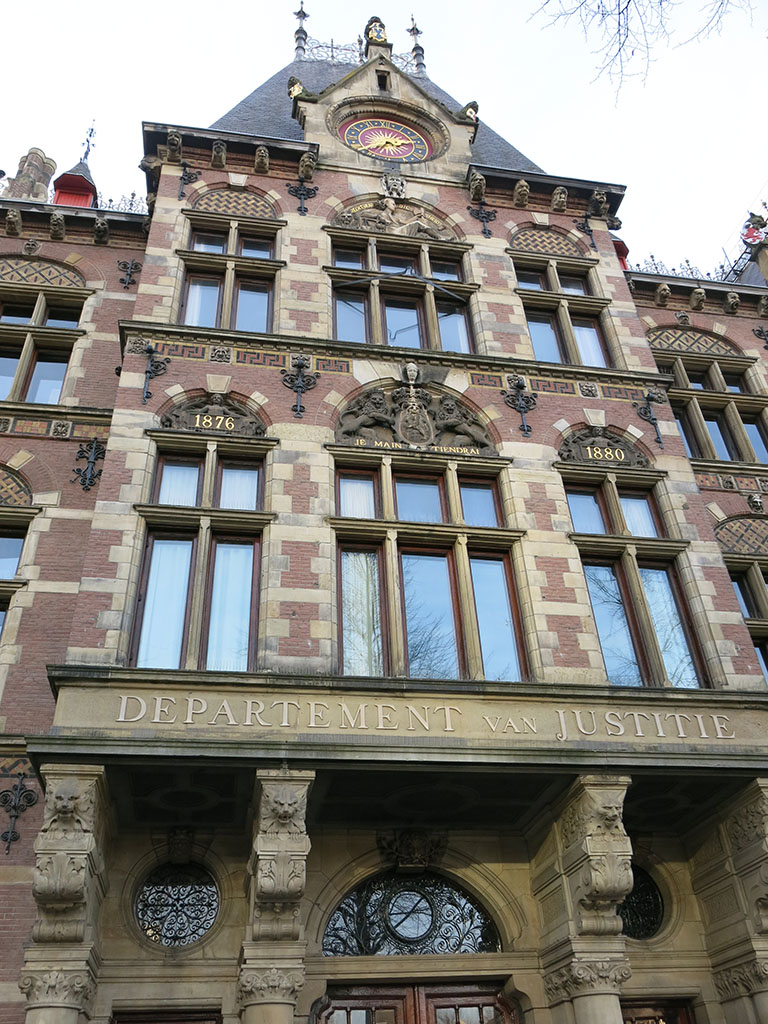 Most people know of The Hague but probably don’t know that much about it. My knowledge was fairly limited, knowing about it being the home of Dutch parliament and probably most notably the International Court of Justice (and UN). But as it turned out it was also home to one of the most famous Dutch paintings, Vermeer’s Girl With The Pearl Earing, so off we jumped.

Walking from the station instantly we felt we were in a different place. While there were some canals, they were much less prevalent than Amsterdam or Delft. But for me what jumped out was that city and people seemed much more multi-cultural. Amsterdam I think lends itself to a fair multi-cultural vibe, but The Hague felt like a greater mix of nationalities. Whether we just happened to wander through cultural centres of the other nationalities, but it was a real melting pot of influences. 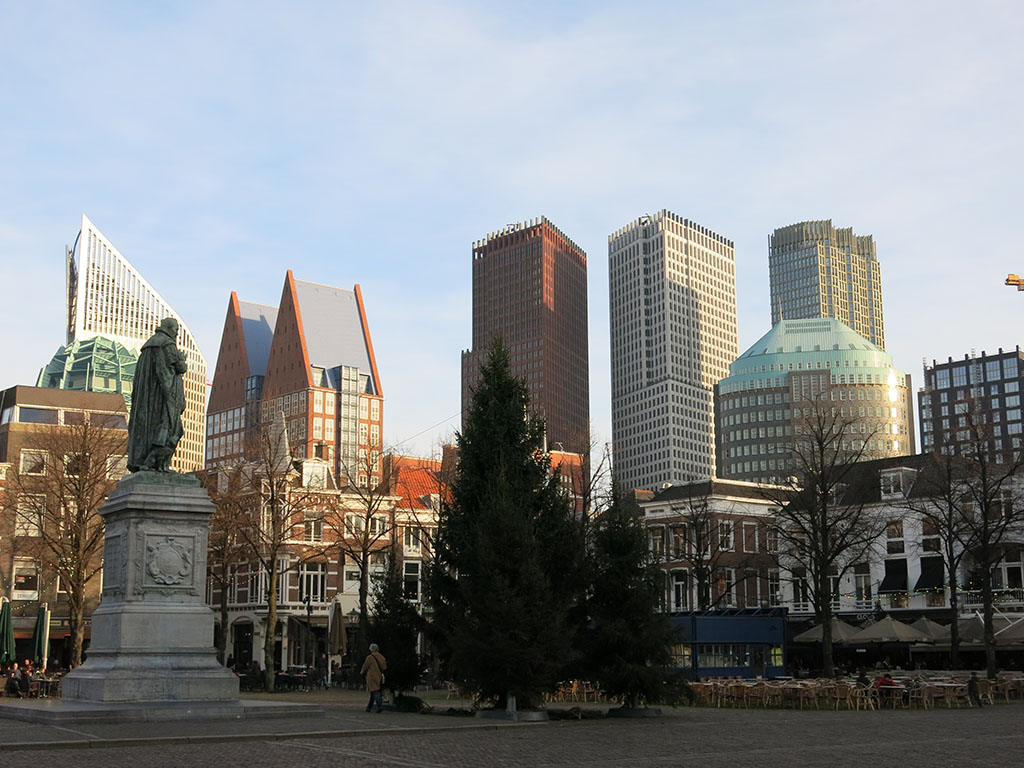 The architecture was also very different. Gone were canal houses, and here we were in something more closely (but not completely) resembling a typical city. 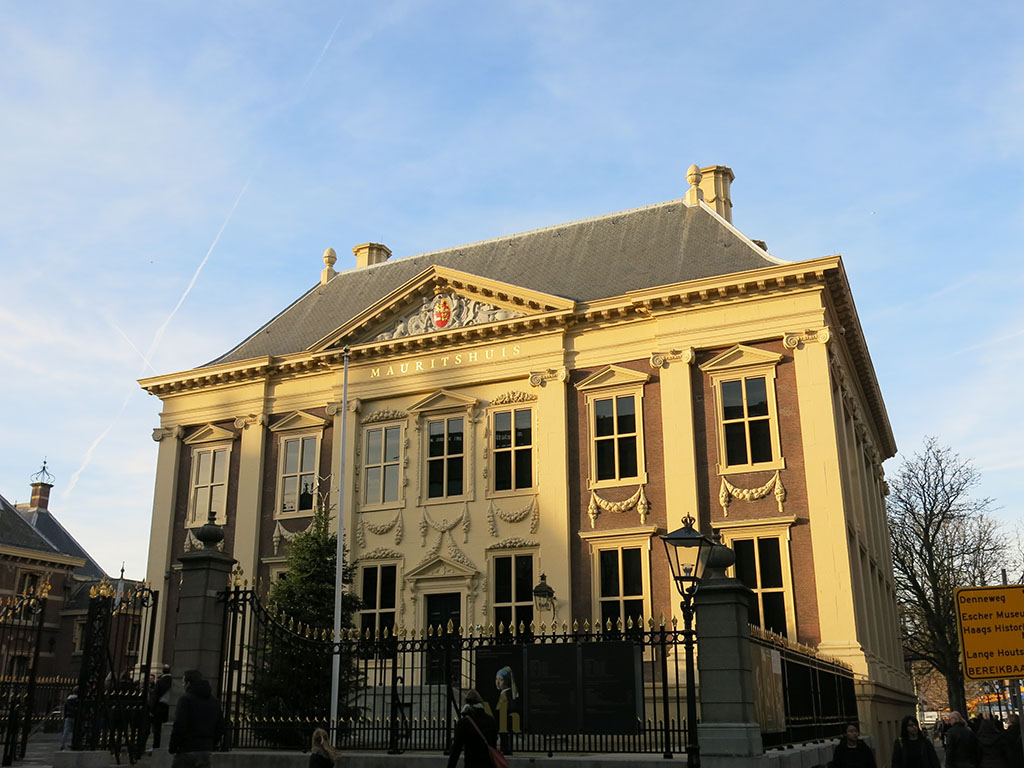 Given it was already mid afternoon, we headed straight for the museum. The Mauritshuis is the quaint house the houses a modest but important collection of Dutch paintings and sculpture. In a museum not really any bigger than a large house, a couple of dozen rooms house a quite stunning collection. There were not many big works there, but as a museum capturing influential Dutch art, it really was a great place to visit. And the modest scale meant in an hour you were done and did not feel drained. 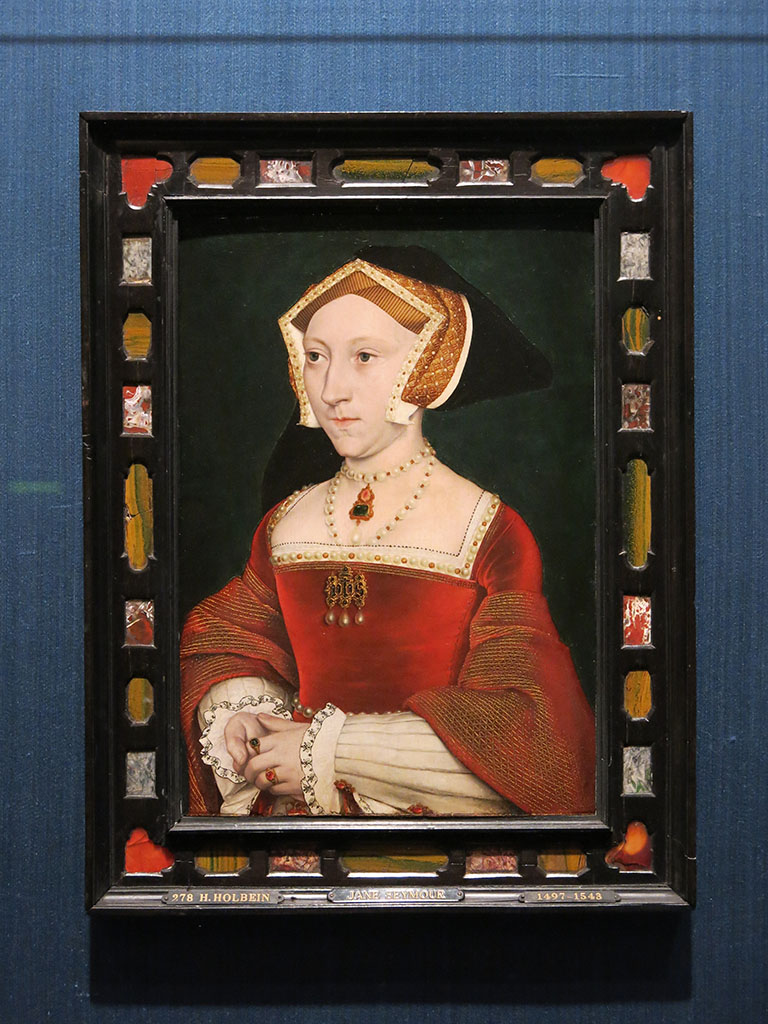 the other jane seymour

Kate was quite excited as she recognised a painting straight away she had never thought she would see, a slightly more obscure Holbein of Jane Seymour (not Dr Quinn Medicine Woman you silly folk, but wife of Henry the 8th. Surprises are the best! 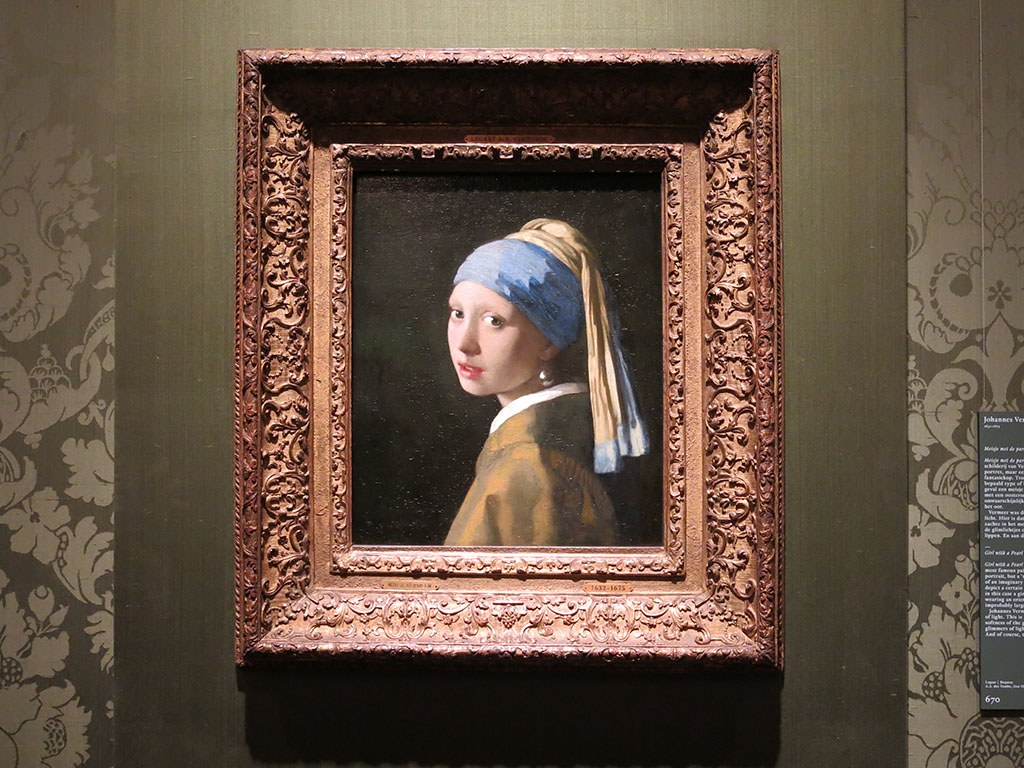 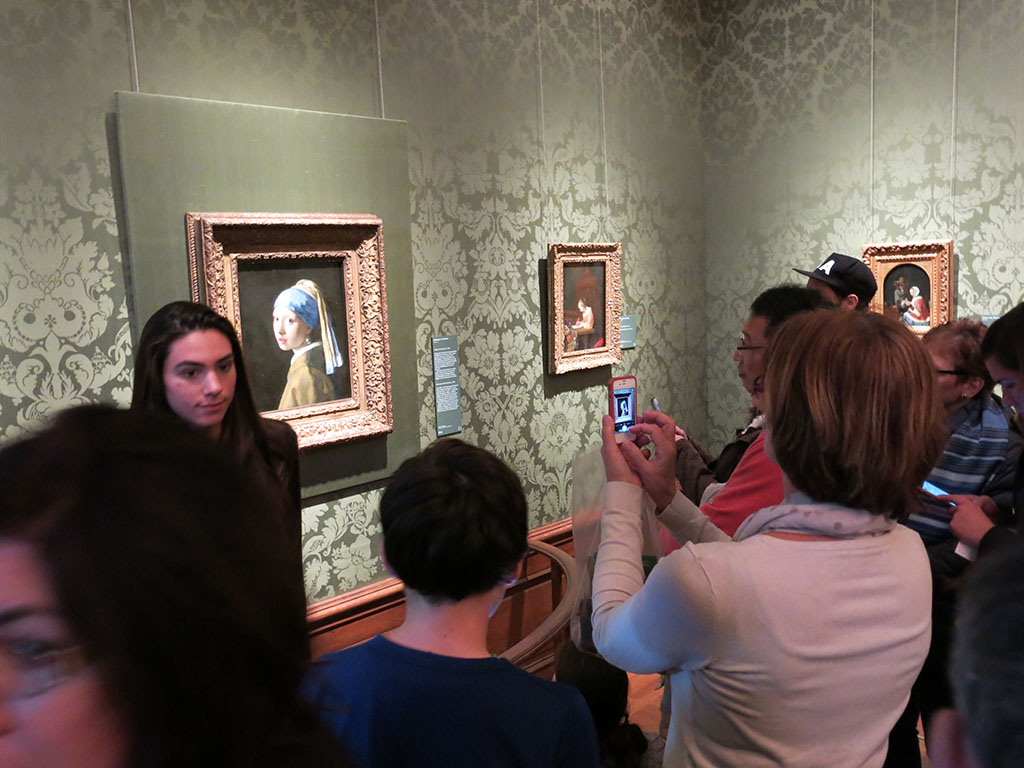 she’s a popular one

We wandered through the rooms, checking out more Rembrandts, before reaching the room everyone had gathered in. Much like the Mona Lisa, it seems when people come to this museum, many run for this room to spy on the Girl With The Pearl Earing. It was quite a buzz to see it, but for me the Vermeer’s in the Rijksmuseum were much more compelling. Not that this is a dud! And it really was so cool to see it in the flesh. But those in the Rijksmuseum are just something else.

The sun was starting to descend so we did a quick wander through the courtyard of the Binnenhof, the home of Dutch parliament. we didn’t have time to do much, but was nice as a final interlude before heading back to the station.

By the time we got back to Amsterdam, got some food, and headed back to the hotel, we decided to have a quiet night. As a side note, I have to confess that while we didn’t watch any TV in Paris, in Germany we found that the Darts World Championships were on at the moment and we got hooked on having it on in the background for an hour or two each night before sleeping. Thankfully our darts addictions we being satisfied in Amsterdam too, so with our fix of darts it was off to sleep.