Before leaving home, I always check up what gigs and sport might be happening where I’m travelling to. The first thing I thought when we planned Berlin was “Bundesliga!”… i.e the national German Football competition. But when I looked I didn’t see any games in Berlin. Doh!

Well, as it turned out I was all wrong. Lucky for me! As we made our way about on our first day I found out that Herta Berlin were indeed playing and at home on Sunday afternoon no less! Win!

But before we get to that, I will fill in the first part of our Sunday. We had done part of Museum Island, but still had a number of museums to visit. We were starting to be a bit museum’ed out, but there was one main one that we were keen to visit, so we headed off to visit. 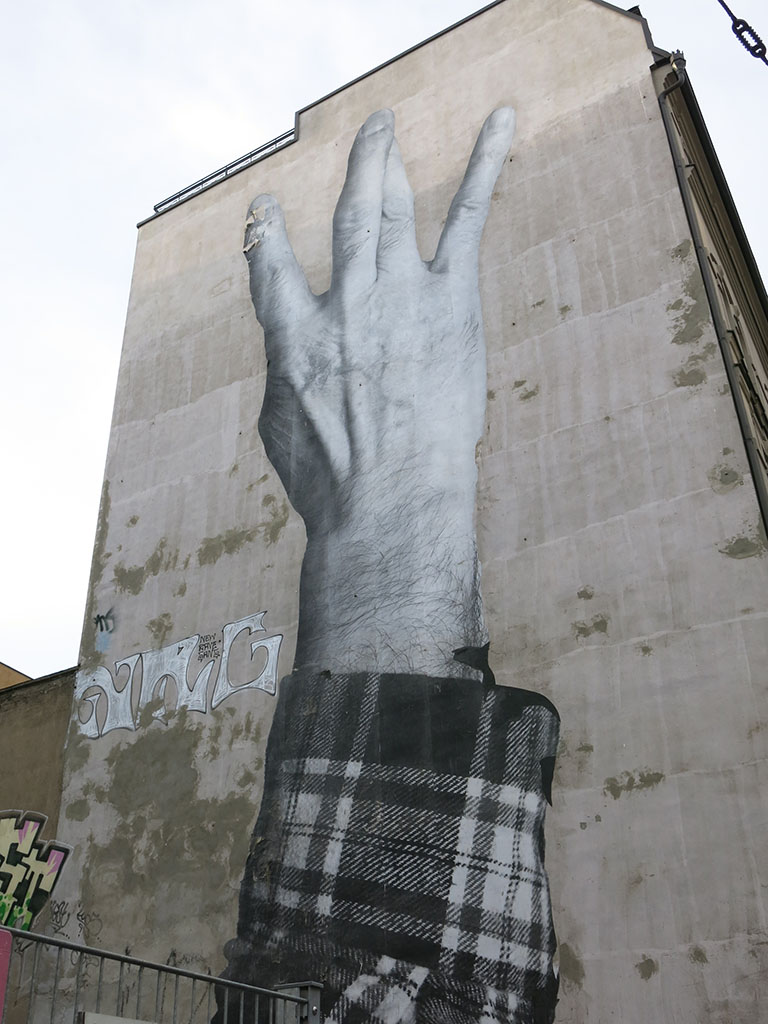 I finally took a picture of the giant hand just outside of hotel (and outside our window). It is very cool but in some respects I thought we’d be seeing much more street art around the city than we had been. Maybe I just wasn’t looking in the right locations. 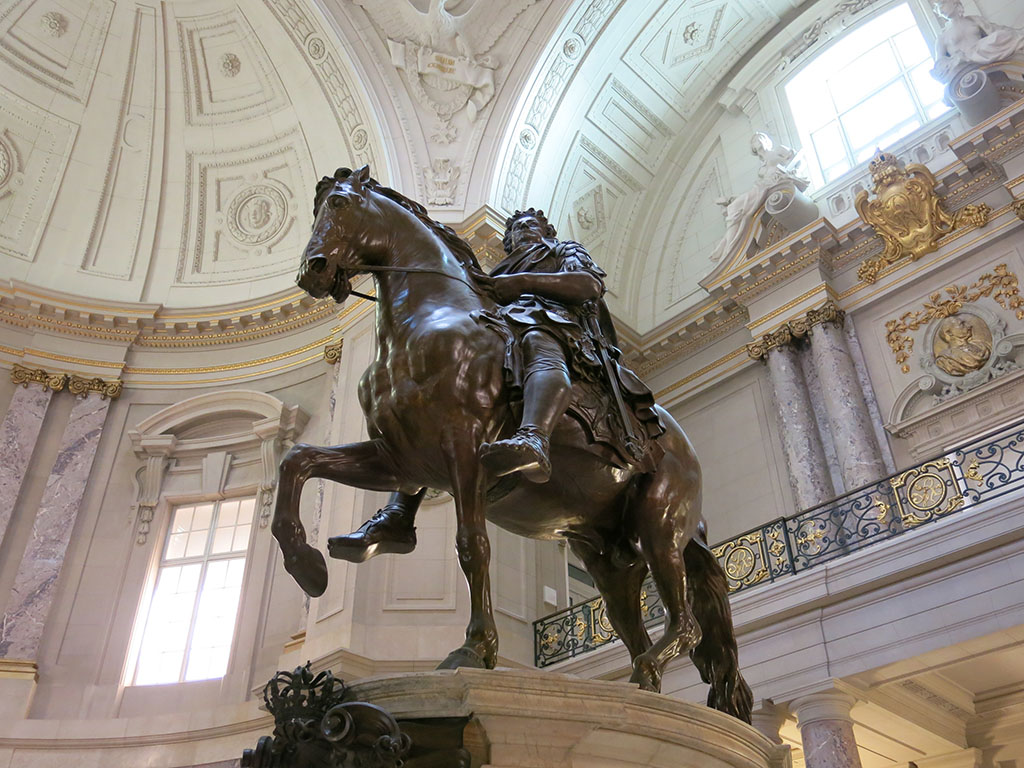 So in no time we were at Museum Island. First one we popped into was the Bode Museum. This was home to a strange collection, including sculpture and coins. More so than the Neues museum which we had visited earlier, this museum seemed pretty lacking. We weren’t sure if it was because we had seen so much amazing stuff in Paris, or if indeed the collection just wasn’t amazing, but we had the real sense that the past century in Berlin had meant that the collection was just a shadow of what it used to be. 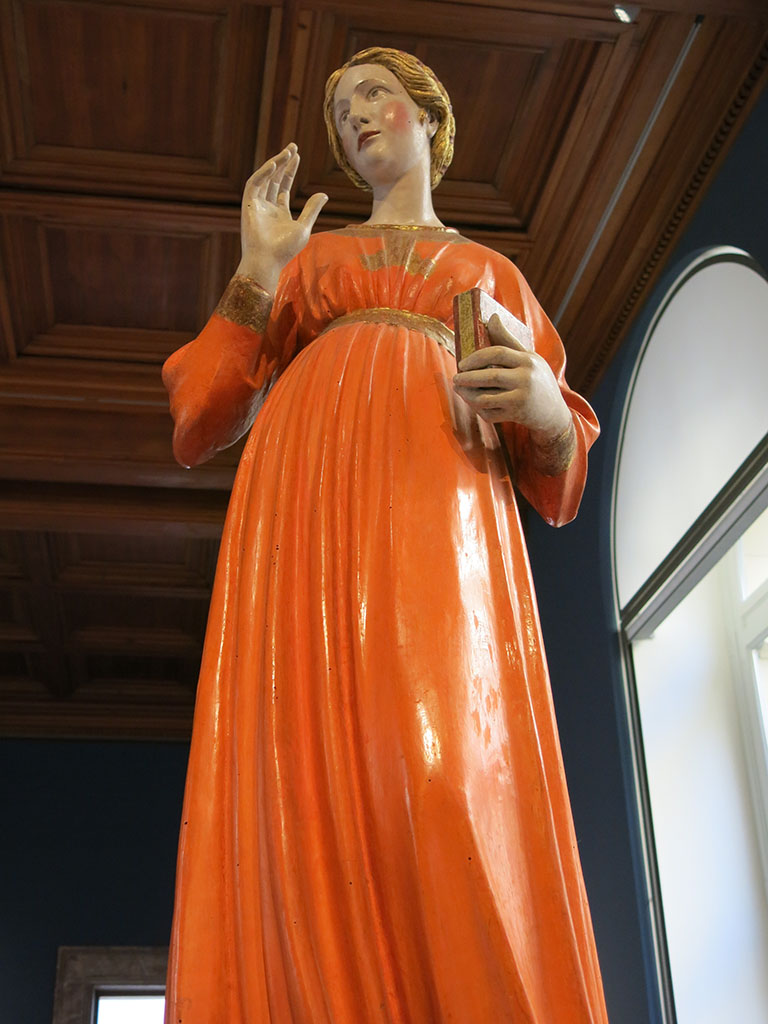 one of the few cool things greeting us

As a result we worked through a good portion of the museum fairly quickly and then hightailed it to the main one we wanted to visit.

We could however get to see their two other most significant pieces, the Ishtar Gate and the Market Gate of Miletus.

The Ishtar Gate was a gate to the inner city of Babylon, and was excavated in the early 20th century and reconstructed here in the Pergamon. And it was HUGE. Something the size of the Brandenburg Gate inside a museum! 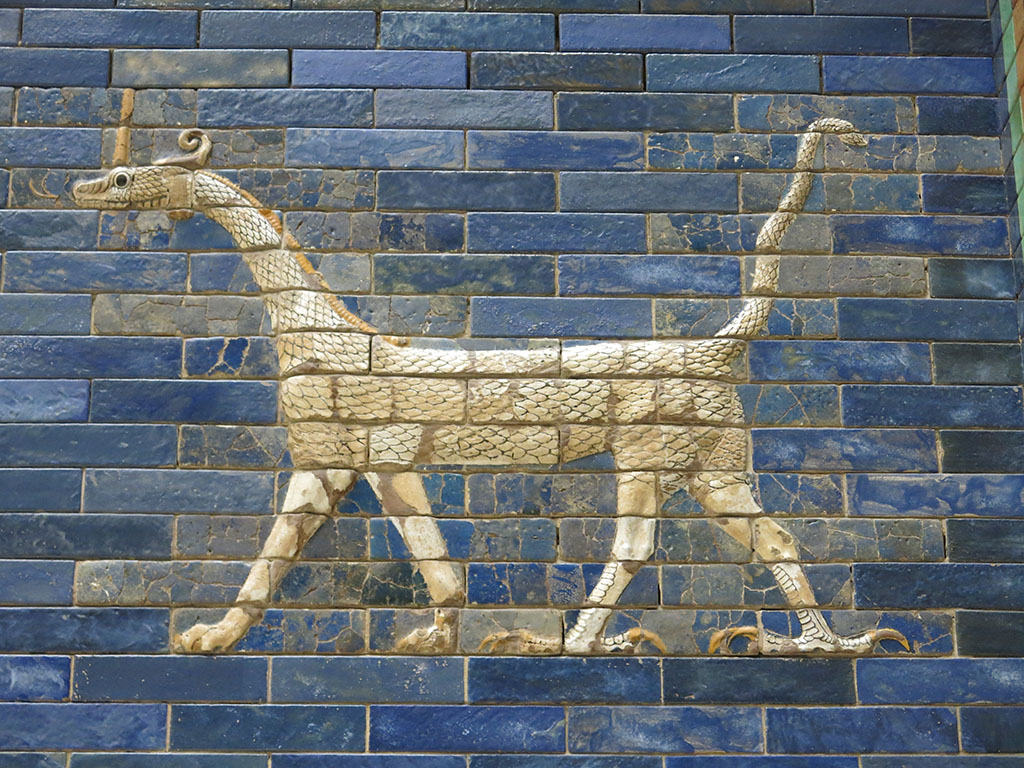 close up of one of the cool details

On the other side of the Ishtar Gate was another reconstruction, this time the Market Gate of Miletus. And this was even bigger! 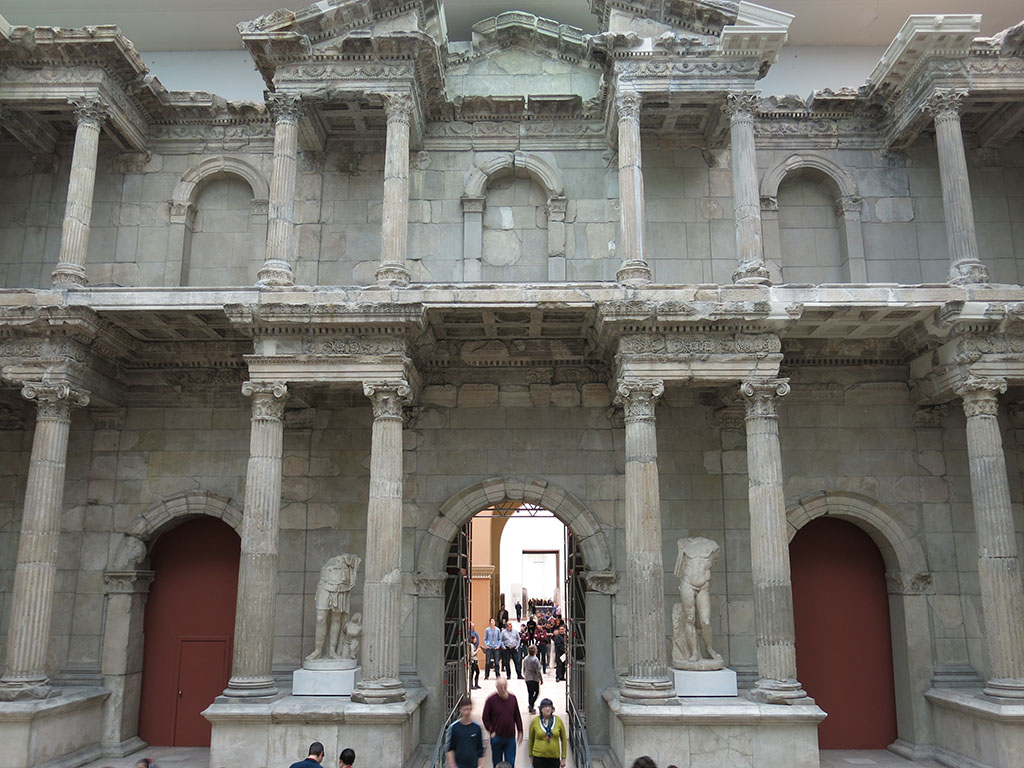 Not quite as old as the Ishtar Gate (this being only just under 2000 years old), this marble gate was also excavated in the early 1900’s, but it has a bit more of a chequered past. This was in many pieces and while it has been kept as original as possible, there are some pieces that are not original. But when something is that old (and was also damaged during WW2) you can cut them some slack.

Much of the rest of the museum was closed so we decided to head off. Rather than visit the remaining couple of museums on Museum Island, we decided to visit the German History Museum. We both felt we had some gaps in our understanding of everything that had taken place, so we decided to bone up on that part of our history. 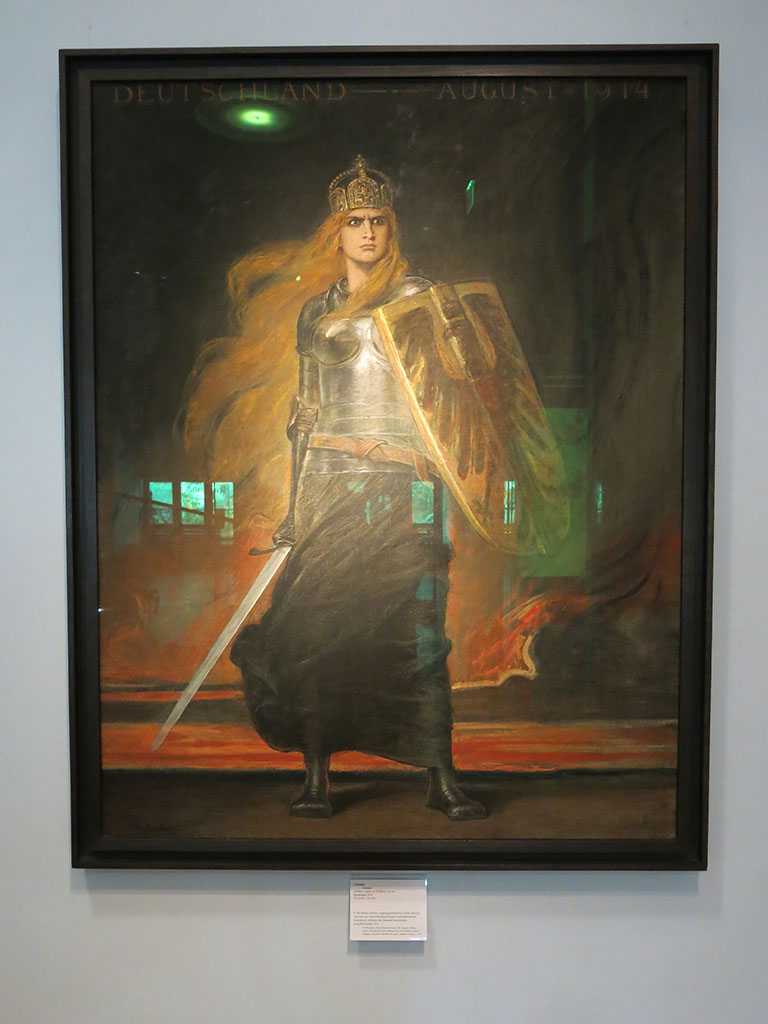 This museum as pretty great actually. It was split into two parts… basically everything pre WW1 and then everything up to the fall of the wall.

I enjoyed this quite a bit more than the museums on Museum Island in many ways. This seemed like a huge and important collection that had not suffered like the others had. While the first part was interesting, I found the more recent history fascinating. 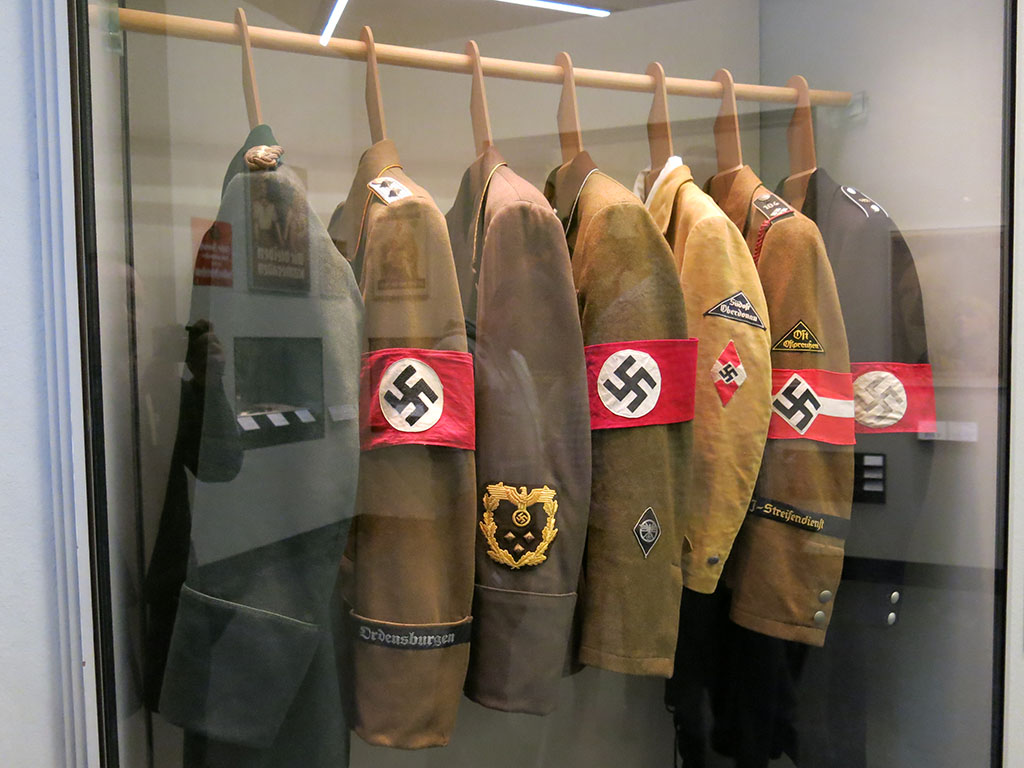 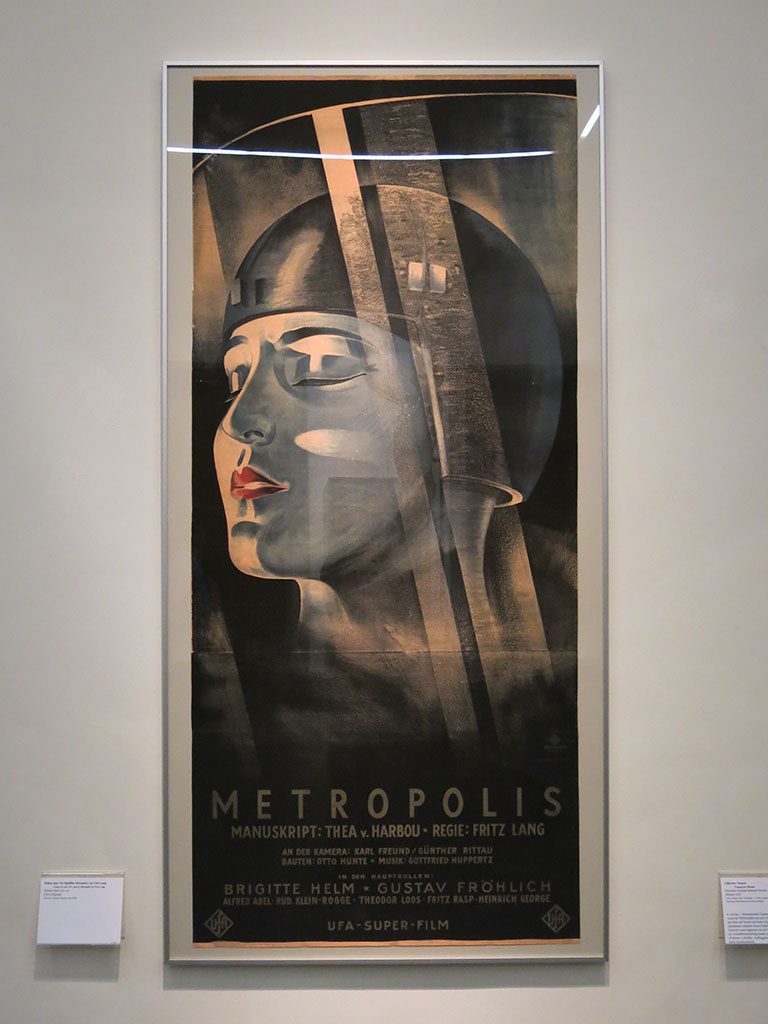 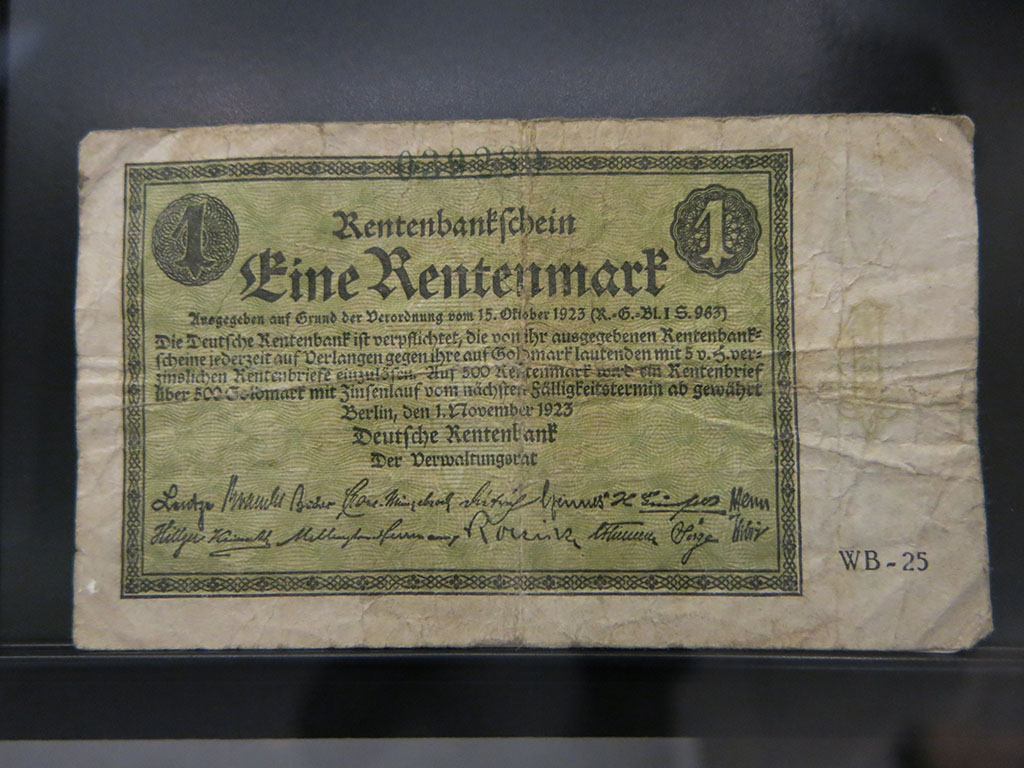 It seemed to strike a balance between acknowledging what had taken place in the first half of the 1900’s, while not showing off too much. I especially found it interesting to see that they had experienced their own case of the Zimbabwe dollar… the Deutsche Mark reached one trillion before it was devalued back to just one! Not sure I will ever see a one trillion dollar note again.

We spent a good couple of hours in there before it was time for Kate and I to part company for a few hours. Yep, it was Bundesliga time!

Local team Herta Berlin were scheduled to play Mainz 05, out at the Olympiastadion. This was super exciting. Not only would it be my first Bundesliga game, but also a trip to the old Olympic Stadium, built for the 1936 olympics. 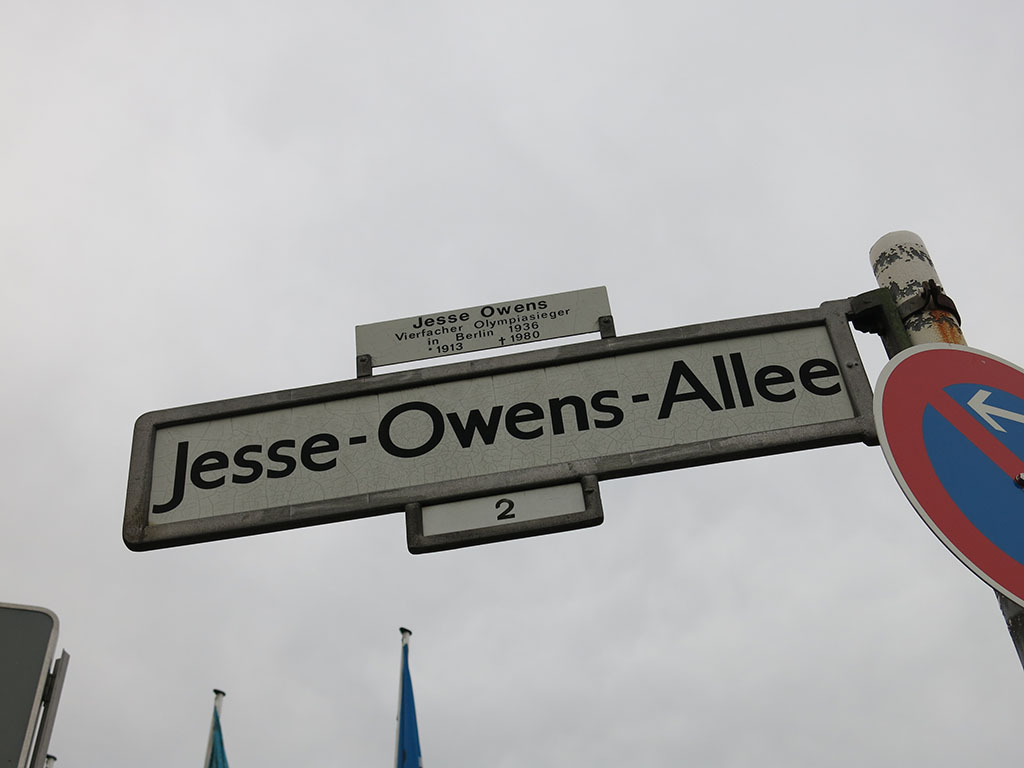 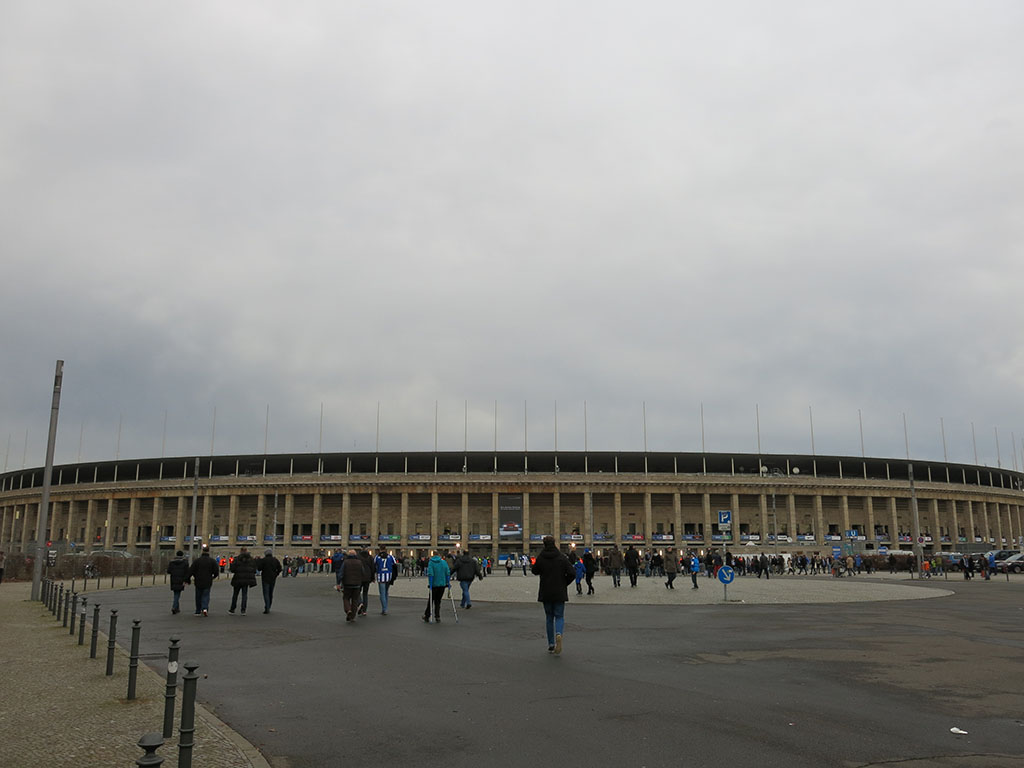 On arriving I was greeted by a different type of stadium to what I expected. I guess I didn’t know what to expect but not sure this was it! Unlike most other stadiums I had visited around the world, this was very bare bones… much more like a colosseum than a modern sports stadium. By this I mean that the entry to the stadium is via a main security gate into which you enter the stadium grounds. The stadium itself has no facilities in it! It is literally just basic stairways and seating, where stairs downward took you to the ground level seating and stairs up into the top tier. A super efficient way to hold 75,000 people!

It meant that getting in and out of the stadium was super quick and easy. It also meant that food vendors were all around the outside of the stadium, so I could bratwurst and pretzel it up nice and easy 🙂 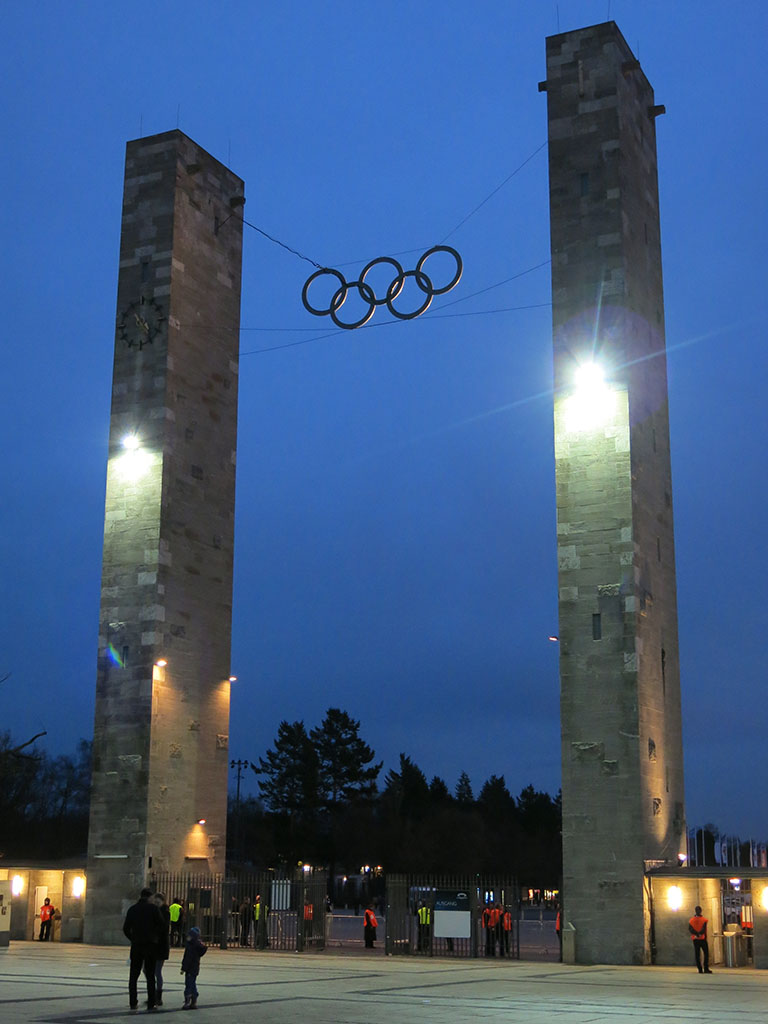 home of the controversial  1936 olympics 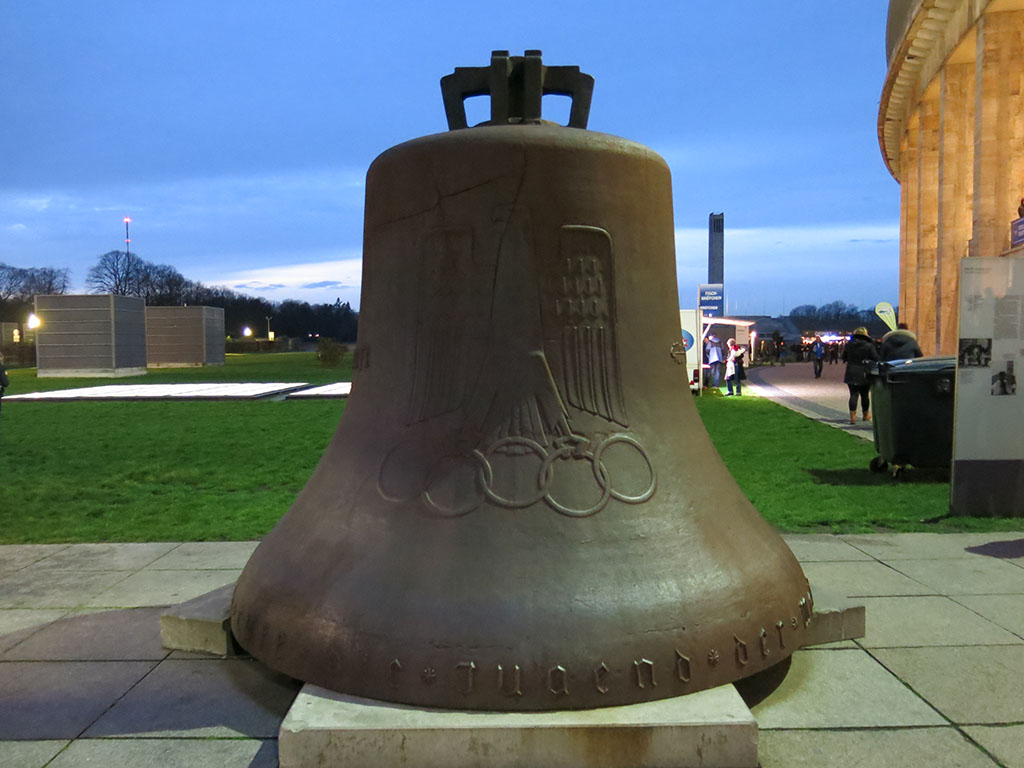 lone survivor of the bell tower

Outside the stadium were some reminders of the original purpose of the ground. The Olympic Rings still presided over the ground, while an Olympic Bell stood in the ground. Apparently the bell tower was the only thing destroyed during the war, with the crack in the bell the only scar on show. 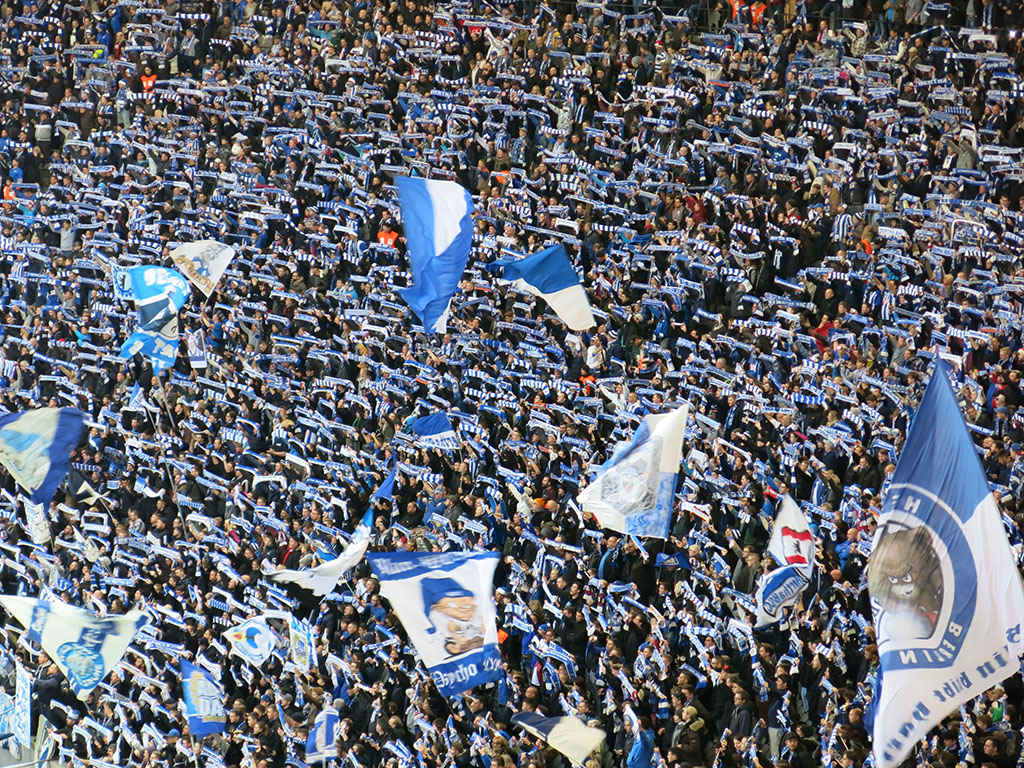 the fans are getting ready!

It was getting close to kick off so I went inside the stadium. There was a crowd of about 50,000 amassed for the game and the active supporter end was going crazy! It was continual songs and chanting and it was deafening in the stadium. Ah, just like back at home with my beloved Melbourne Victory and the north end. It felt like home 🙂

Before the game kicked off, the crowd burst into song (just like we have embraced Stand By Me back at home for Victory games). This was VERY strange though. I couldn’t understand the words, but the tune was “Sailing” by Rod Stewart! How bizarre! (*Note, I have since read up and found out it is their Herta Berlin hymn called “Nur Nach Hause”. I still need to find out why Rod Stweart!).

Then the whistle blew and we were off!

I would love to say it was one of the best games I had ever been to, but it was just a really good, solid game. It lacked the thrills as Herta Berlin never really let Mainz get a look in. It was 1-0 at half time and could easily have been more. Berlin just dominated the game. 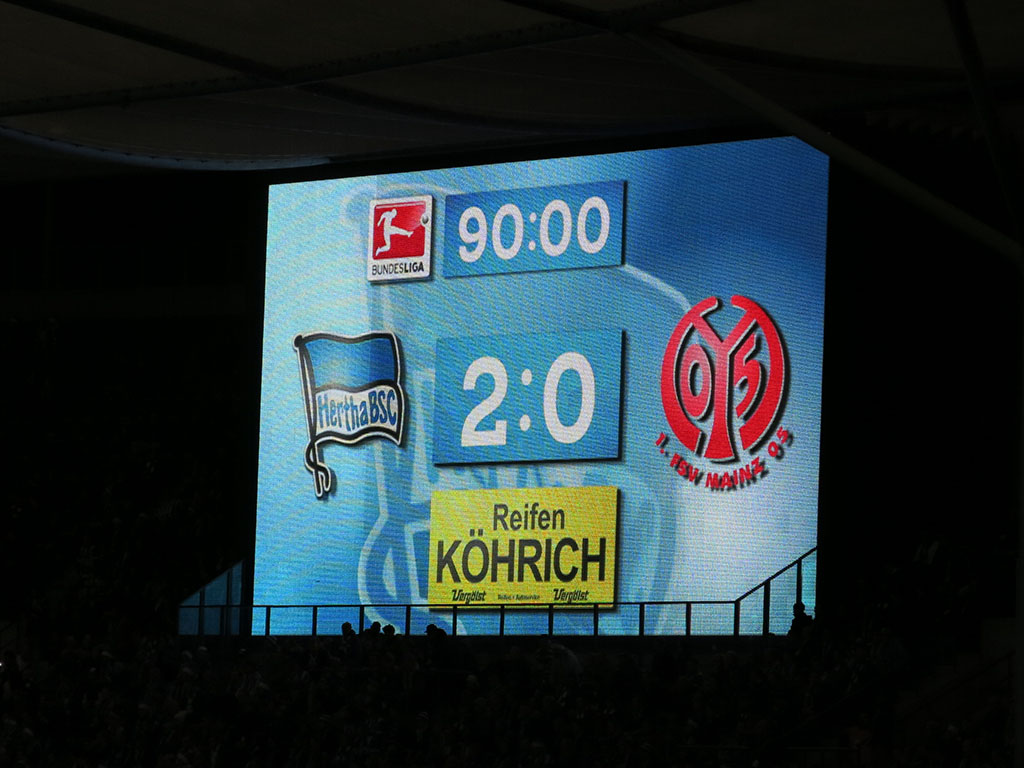 The second half was the same story… controlled by Berlin from the kick off, and another well executed goal meant 2-0 was the result. It should have been 3-0 thanks to a wrongly called offside (I was with the locals on that one), but everyone was happy in the stadium. While I say it was just an alright game, it was magic to see 2 goals scored and see the passionate Berliner fans loving it. I was up out of my seat as well… this is what the world game is all about. I got to experience a crazy happy crowd in (arguably) the biggest football league in the world. Totally awesome. 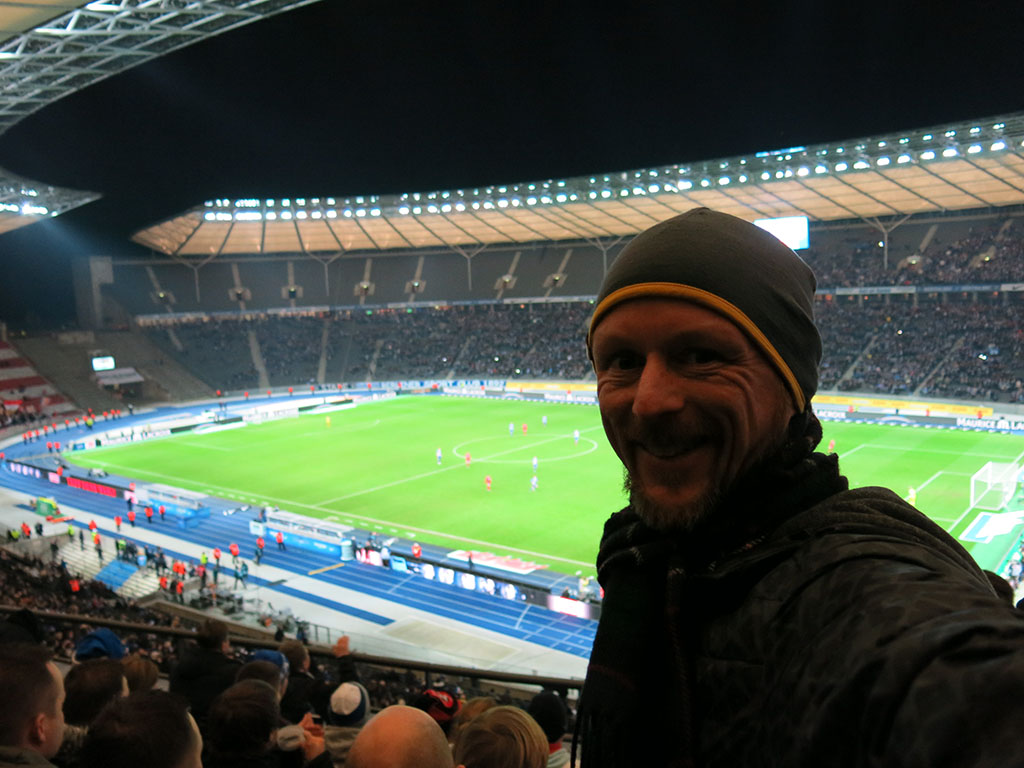 Everyone started to exit the ground and head back on the train. How awesome it was to be surrounded by all the happy fans in good spirits (as well as a stadium that takes 1 minute to get out of and a train that arrives every few minutes).

It was well dark by this point when I got back to the hotel. Kate had been kicking back and was keen to get out and about a bit. So without further adieu, I was back out the door!

Being after 6pm on a Sunday our choices were partly limited (well, we had many Christmas markets still!), but we decided to head to Checkpoint Charlie to visit the museum there. 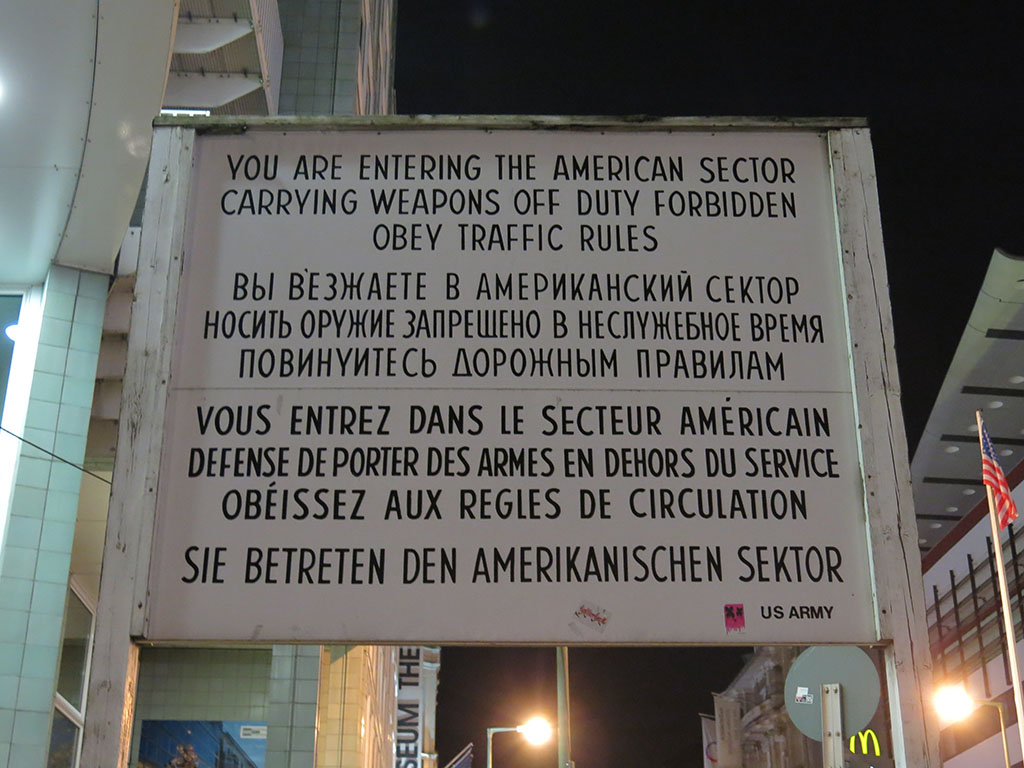 thankfully i left my weapons back at the hotel 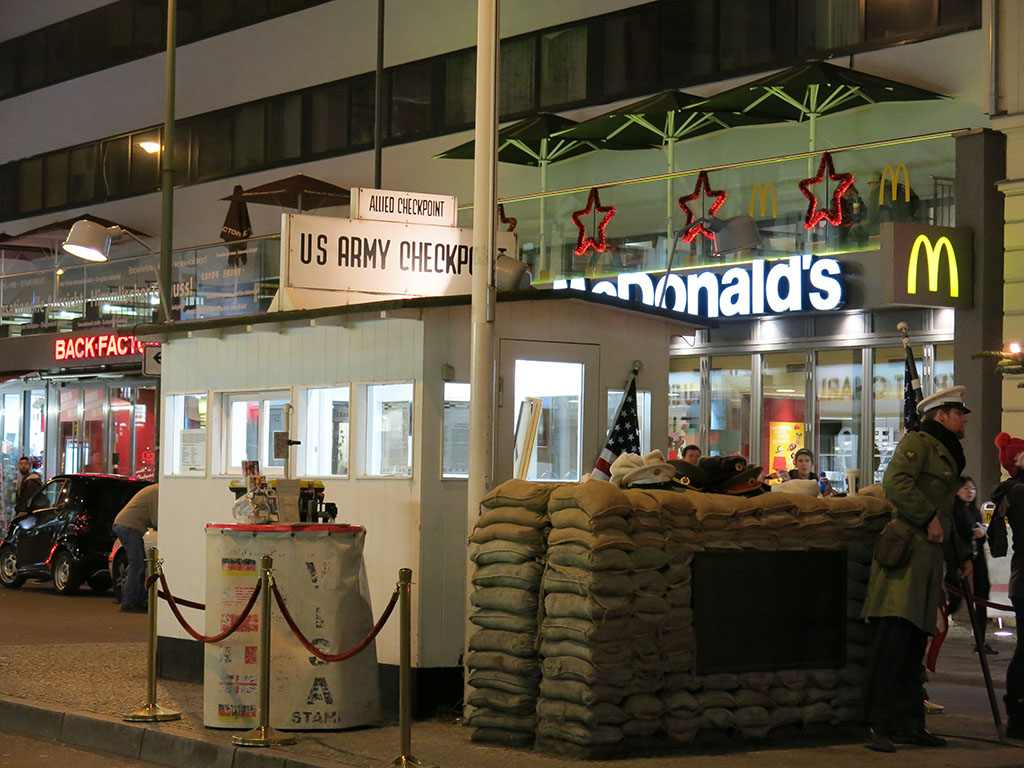 note the authentic mcdonalds there too 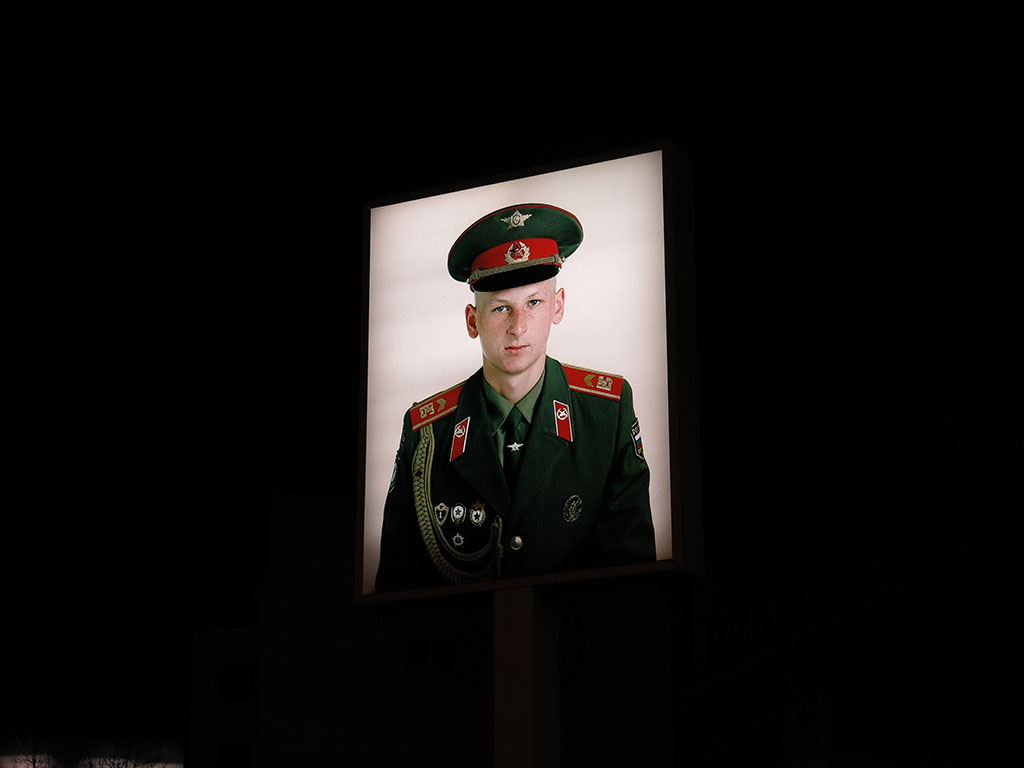 a welcome to the east 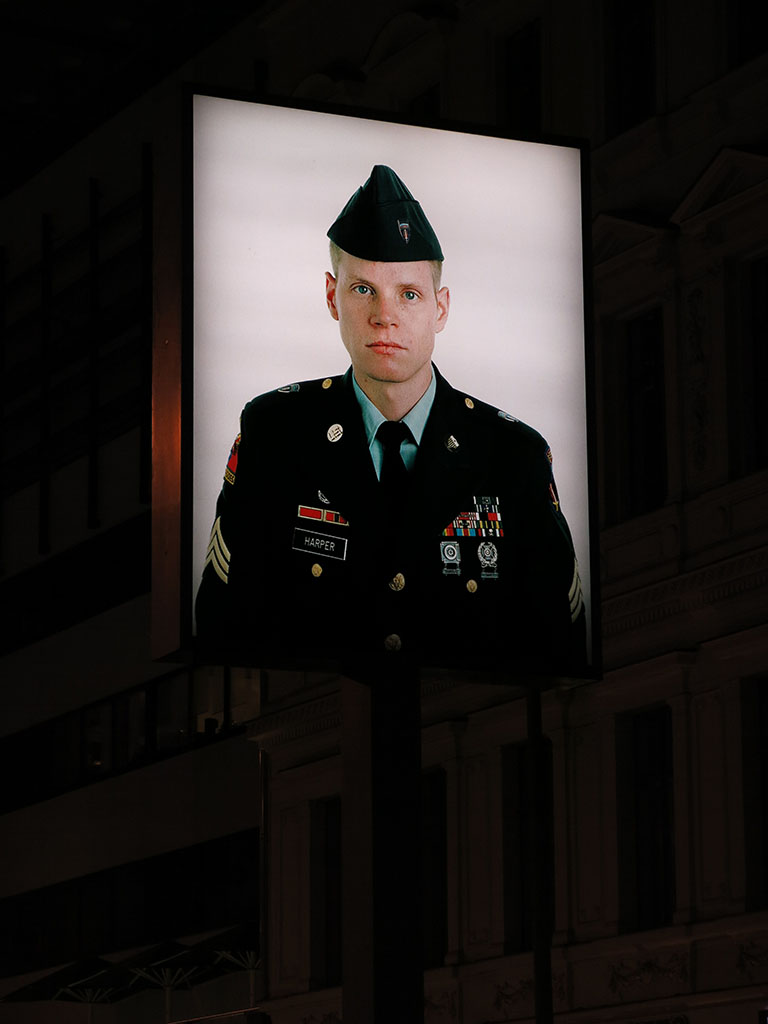 … and a welcome to the west

Most people know about this infamous checkpoint between East and West Berlin, so there is not too much need to talk about it in much detail. Today it still has a hut set up that is perpetually manned by dressed “guards” waiting for tourist photos, and there is a good collection of outdoor information about the decades when the wall was up.

The museum was open so we decided to pay it a visit. I had been 15 years earlier, and it is no exaggeration to say that it looked as though the museum had not been changed at all in that time. Everything looked as though it probably hadn’t changed in decades. 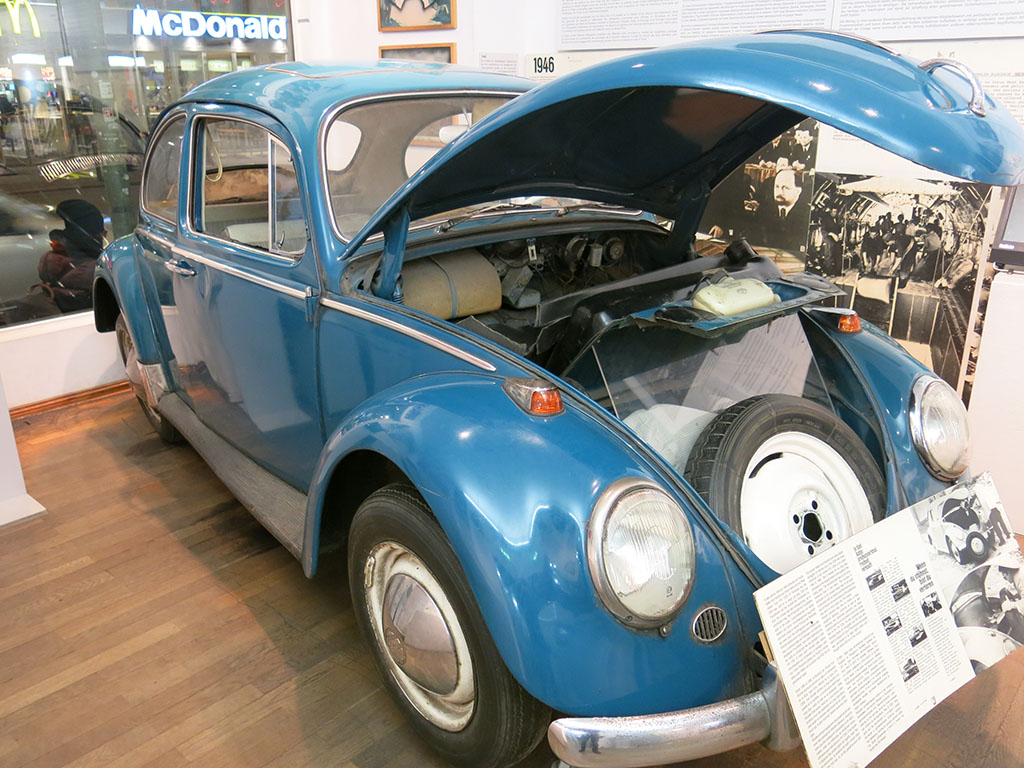 not much room to hide under the hood 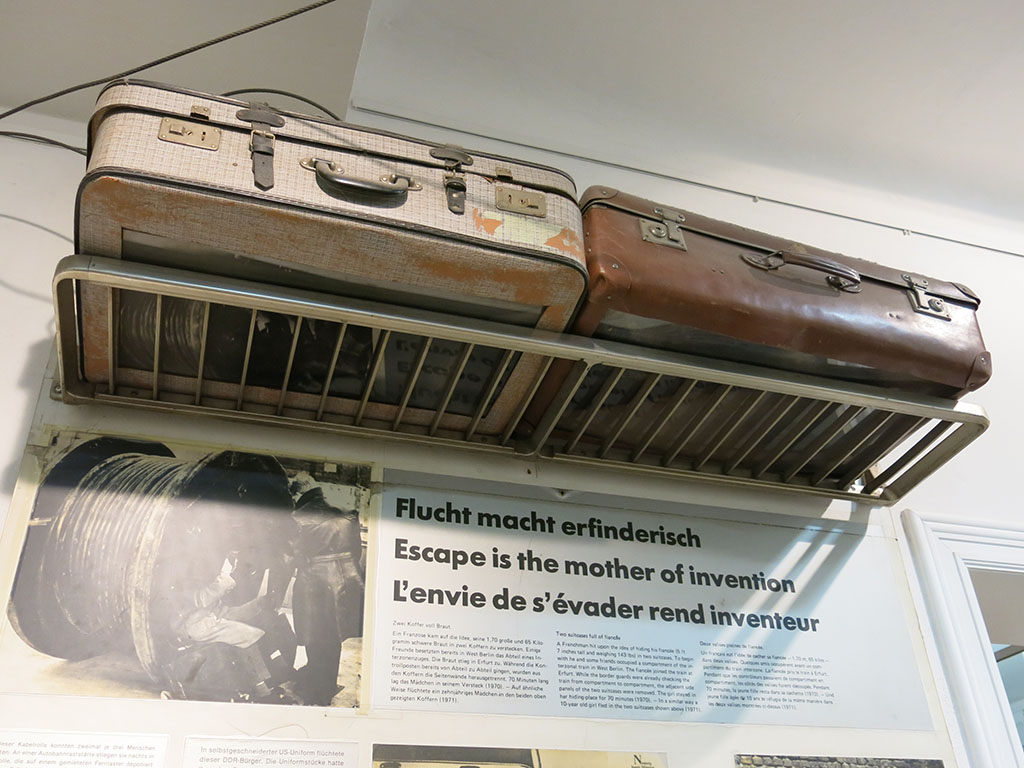 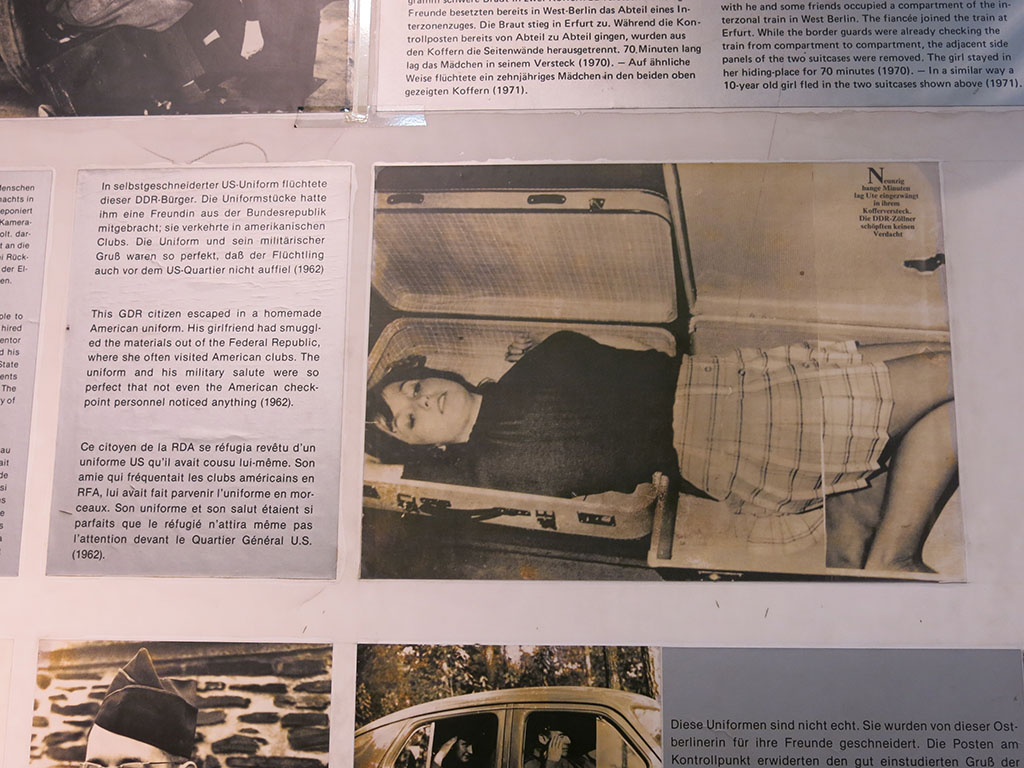 It is an absolutely fascinating museum. The stories of escape are amazing and it actually houses a really impressive collection of escape objects, such as cars, suitcases, light aircraft and all kinds of crazy things. This is incredible to see. If only they could find the time and money to update the displays and make it a bit more modern, it could be a world-class presentation of a fascinating part of history. As it stands it is still fascinating, just pretty rough around the edges. But I guess that might be the point in a way.

It actually took us a bit of time to make our way around, taking our time to read all the incredible stories (some of which seemed straight out of spy or Bond novels). It was getting late, so on to the U-Bahn it was and back to the hotel to call it a day.