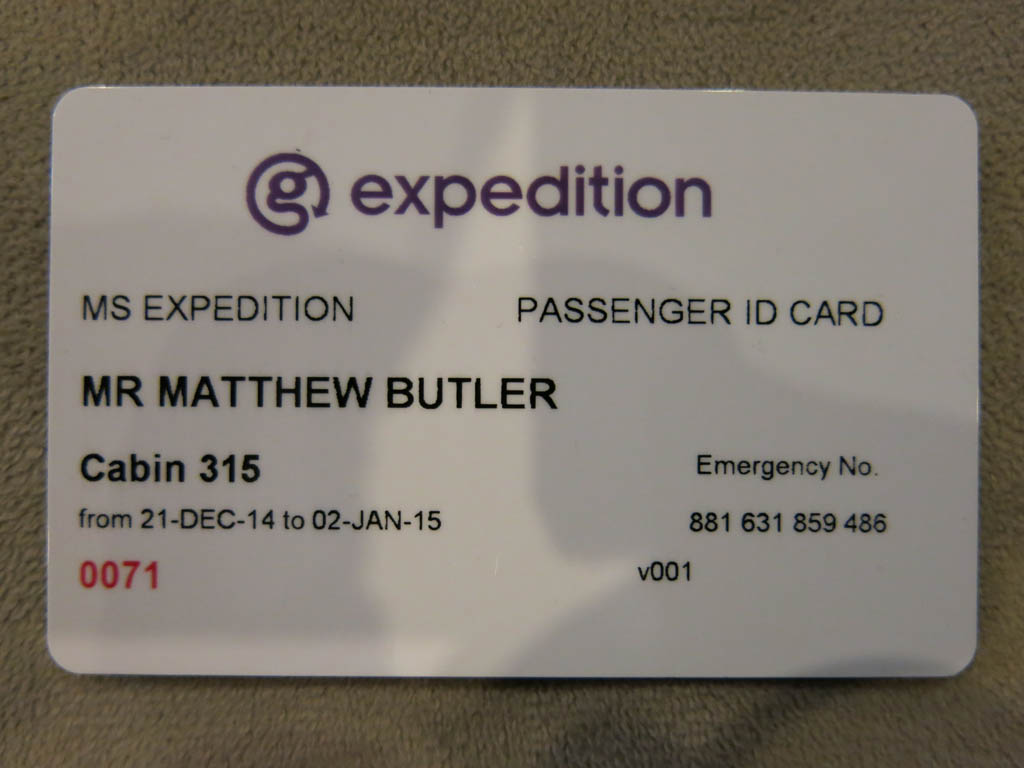 my ticket to the antarctic

Before kicking off our big adventure, we had a free half day in Ushuaia. Being a Sunday, we were told that not much would be open, so rather than just kick around the town, we opted to explore the nearby national park, Tierra del Fuego.

We joined the guided tour early in the morning and headed into the national park. This is in interesting place, as they say it is the only park that has the ocean meeting the mountains and meeting the woodlands. It certainly is dramatic, as we had the still snowcapped mountains meeting the water. 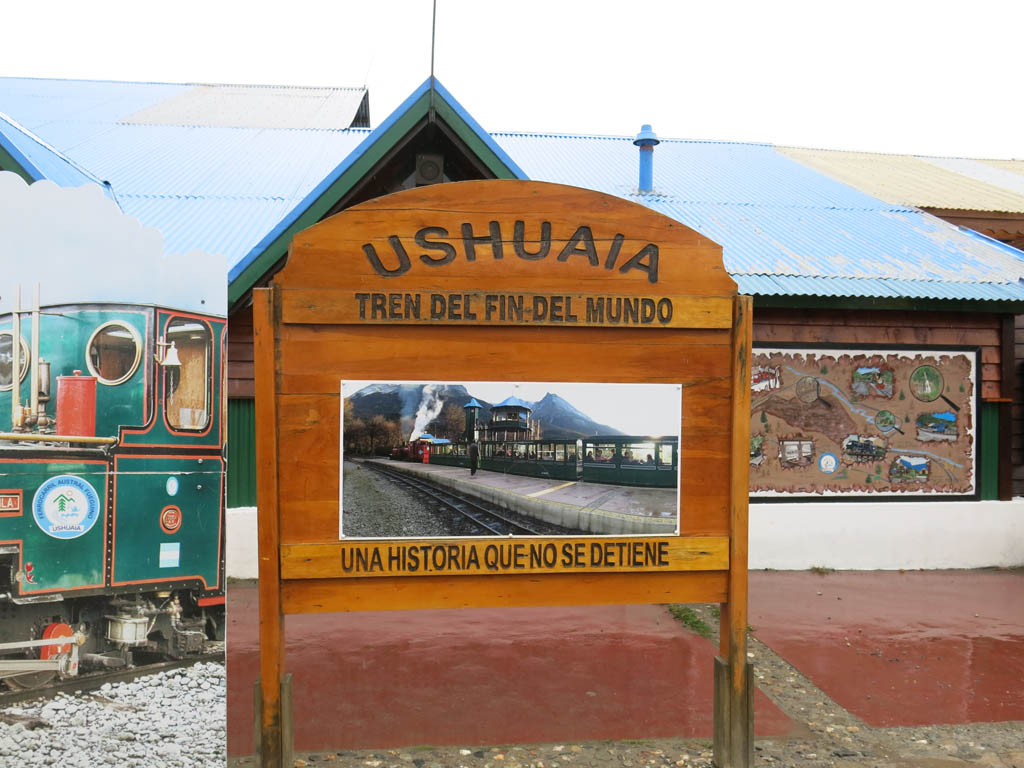 Our first stop in the park was the start of an old railroad, that was originally built by convicts in the late 1800’s. Apparently the Argentinian government thought it best to send prisoners down to the southern tip of the country to establish it and hold on to it. Part of what they set up was a railroad to help with the foresting of the area, and while the railroad is not used anymore, the last 7km still exists as a tourist steam train into the national park. Kate was keen to ride, so we grabbed tickets and jumped on board. 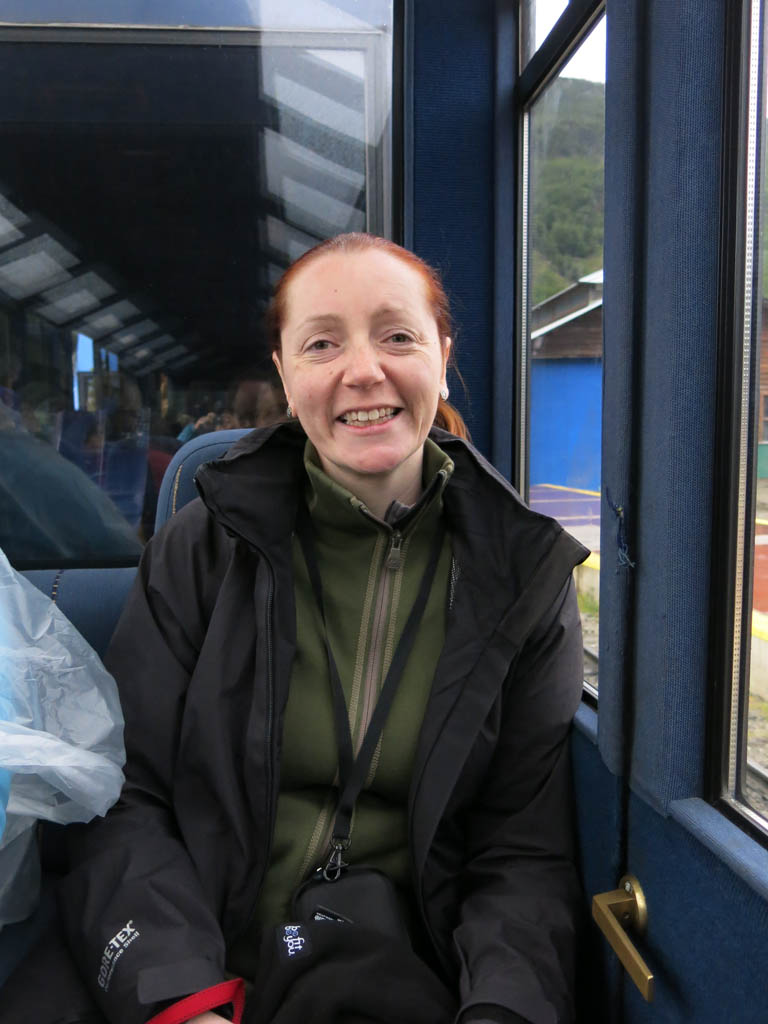 It was a slow ride as we made our way into the park. The scene was quite lovely with the mountains in the background. The evidence of the foresting was clear for all to see though, and it was remarked that it was a tree graveyard, with remnants still scattered about.

We made a brief stop at a station along the way La Macarena, so we obviously couldn’t resist some appropriate action photos. 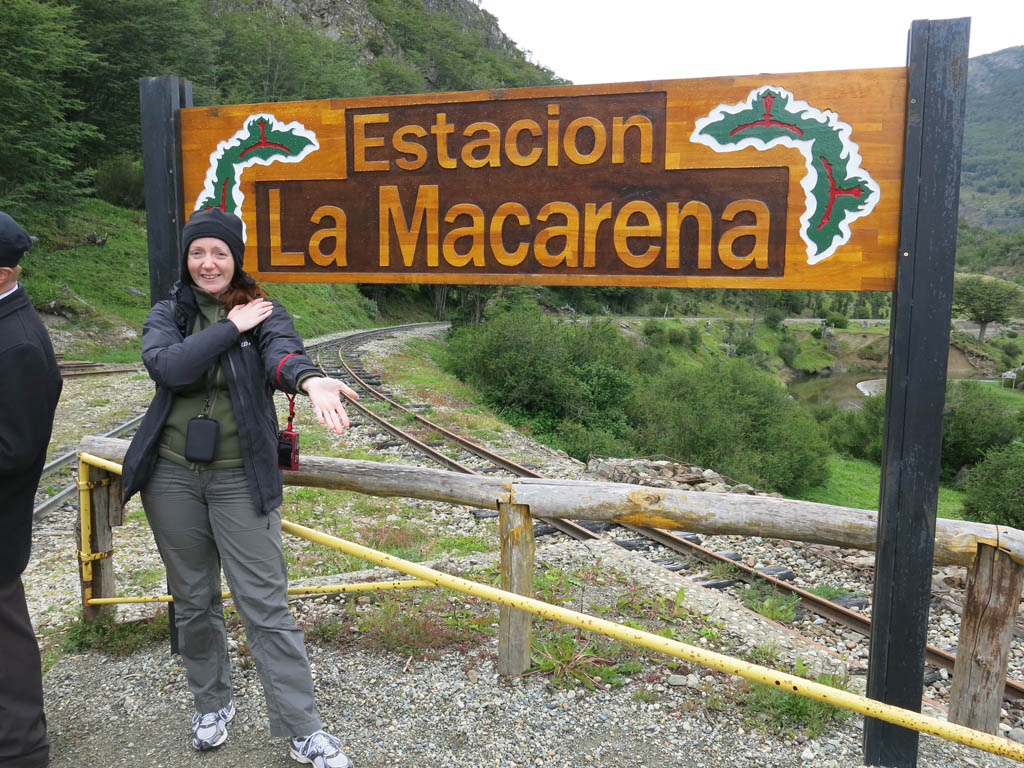 i’m not the only one who does cheesy things 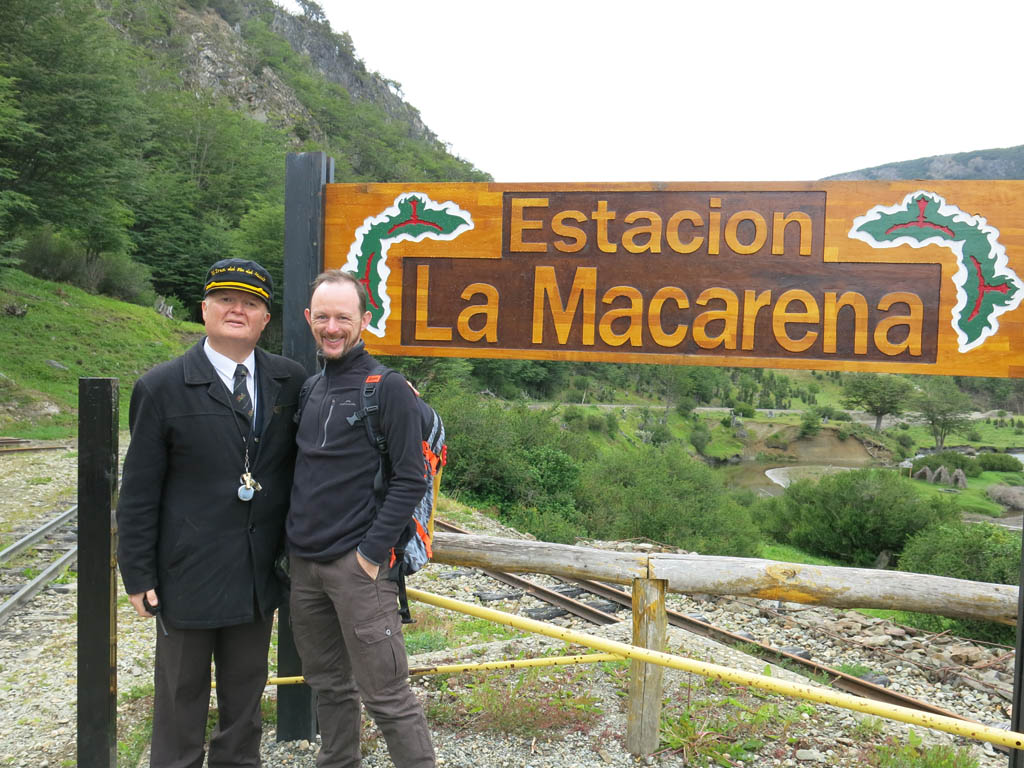 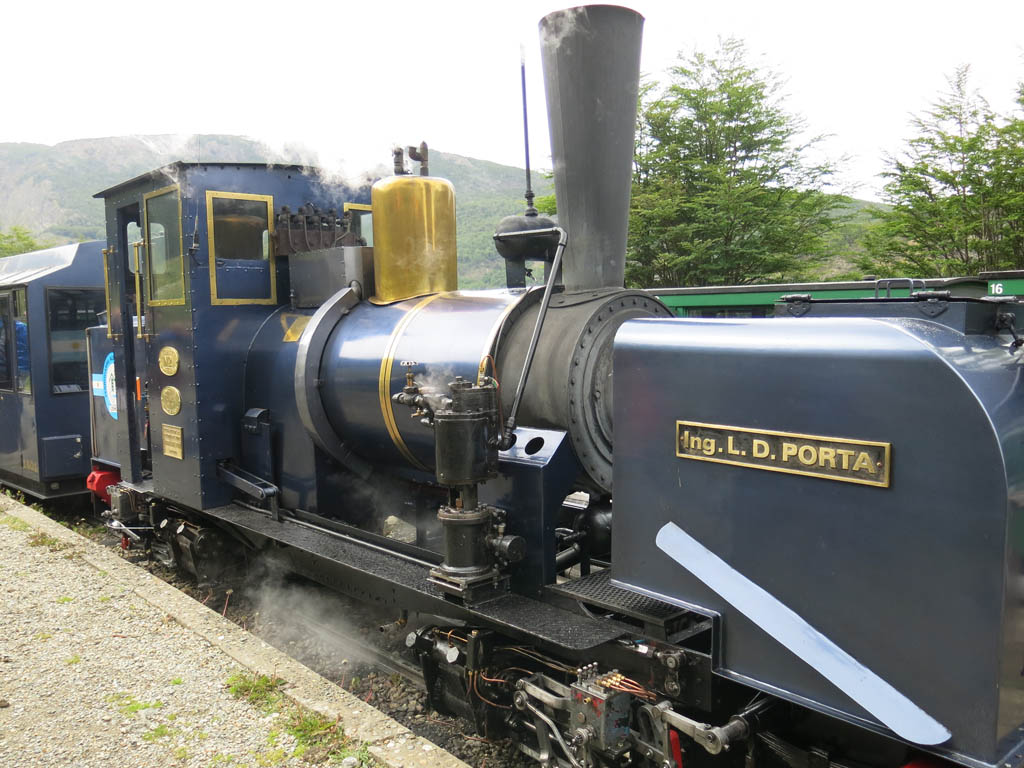 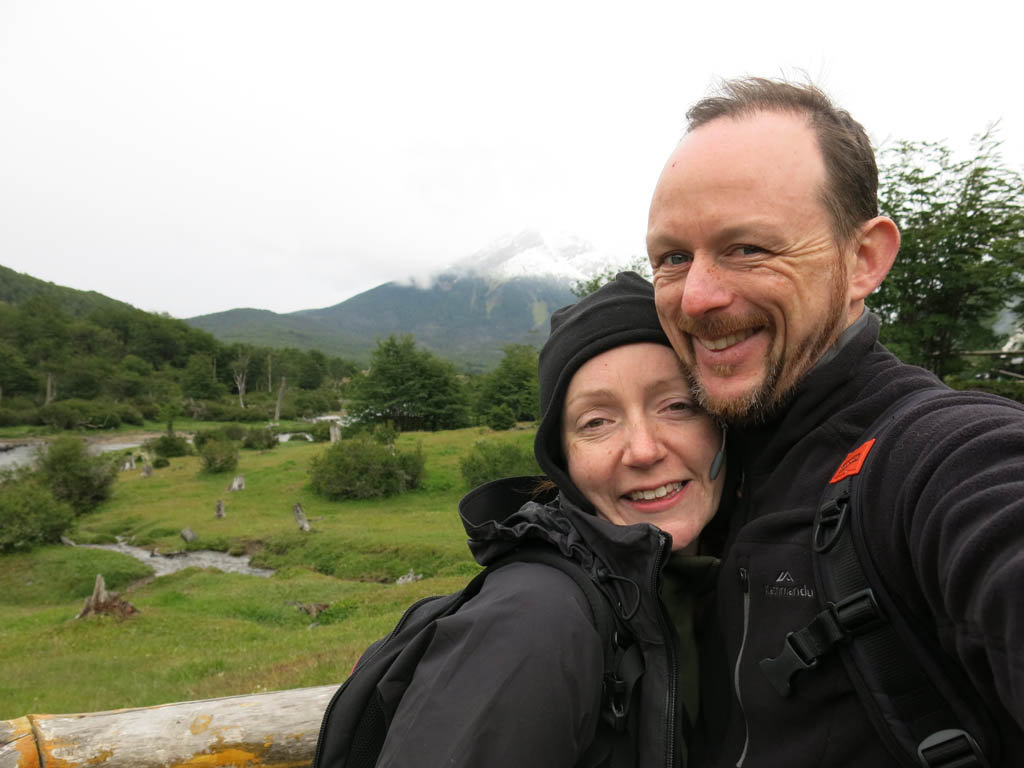 After an hour we made the end. It was a fun ride, and a nice way to spend the morning in a relaxed fashion. 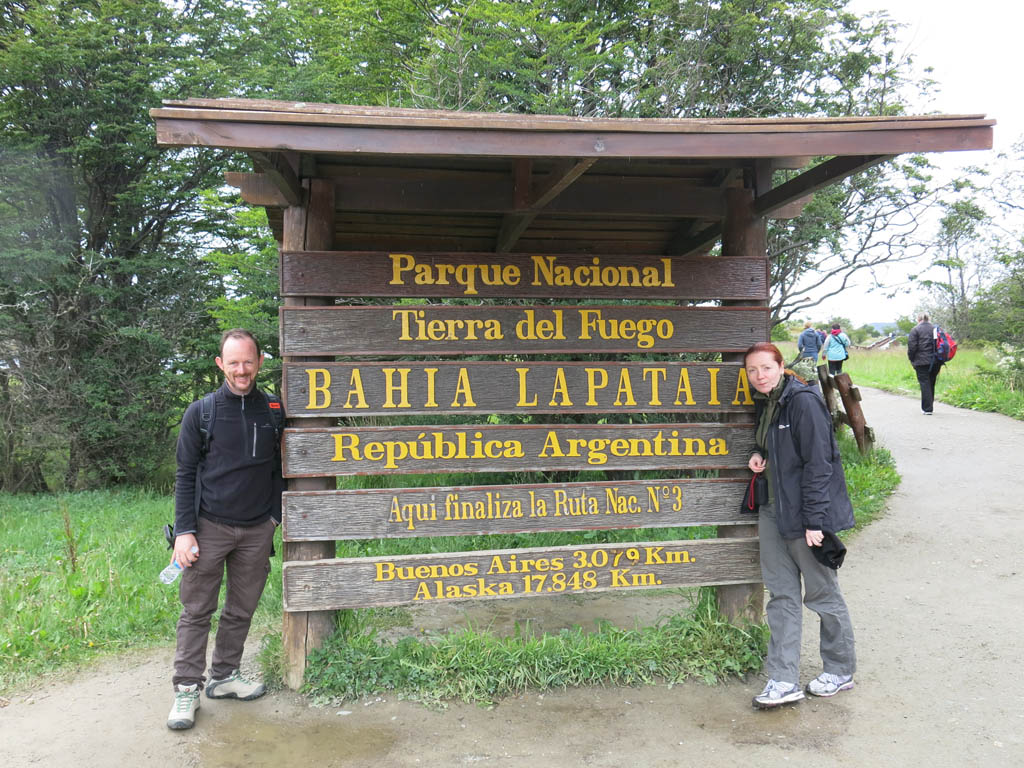 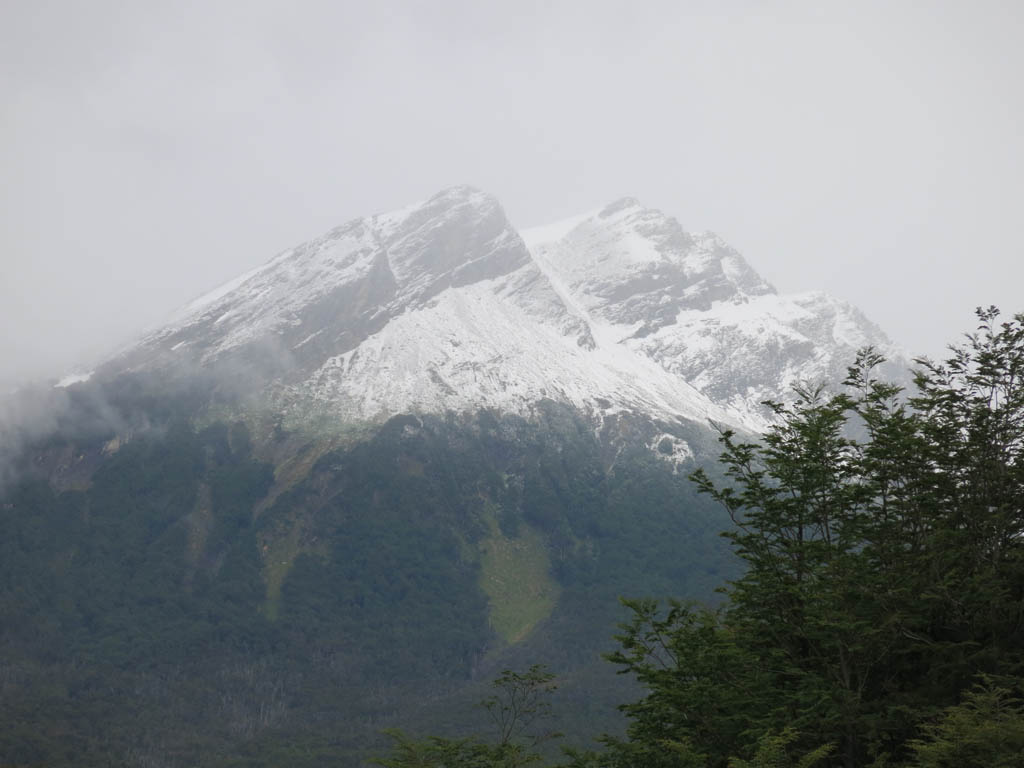 From there we continued deeper into the park, stopping every now and then for short walks and photo opportunities. The park was quite lovely, and as mentioned the mountains made for an amazing backdrop. However, the foresting of the area meant that it wasn’t as picturesque in parts as I thought it may have been. 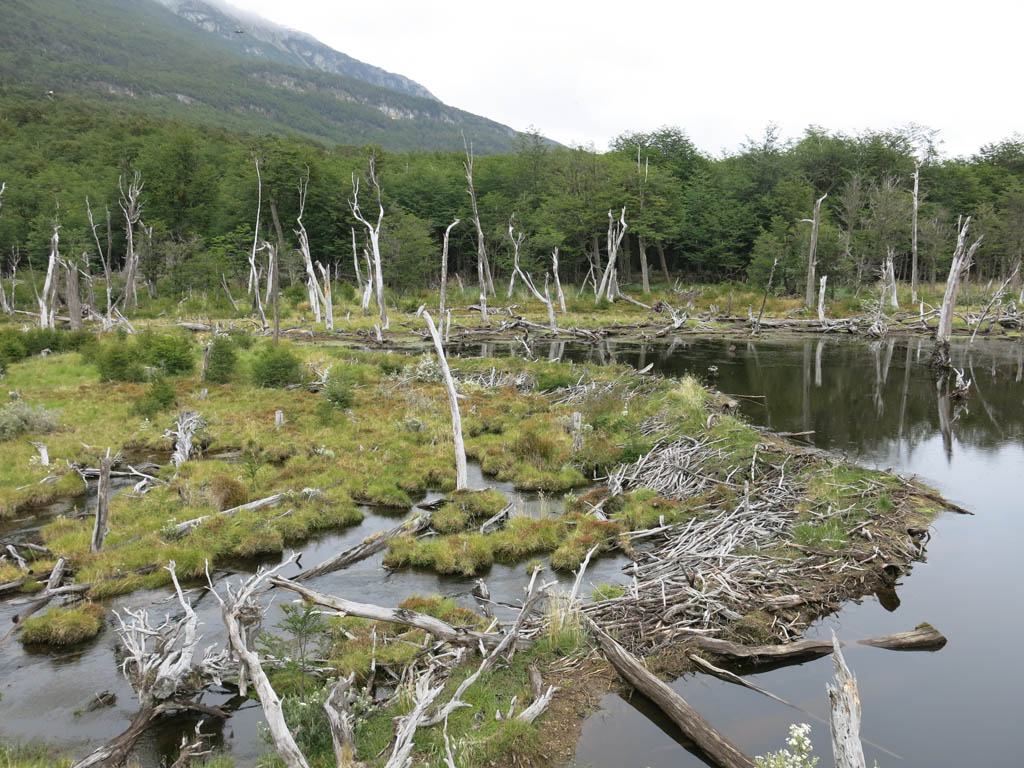 But nonetheless, it was a great way to spend the morning. One thing I didn’t expect was to find out that there was a significant beaver population in the area, making dams in many of the rivers and streams about the park. They were an introduced species, brought in for their fur, however they weren’t really used for that back in the day and apparently they number in the millions. Sadly we didn’t see any beavers, but did see several of their homes, one large one in particular in one of the rivers. 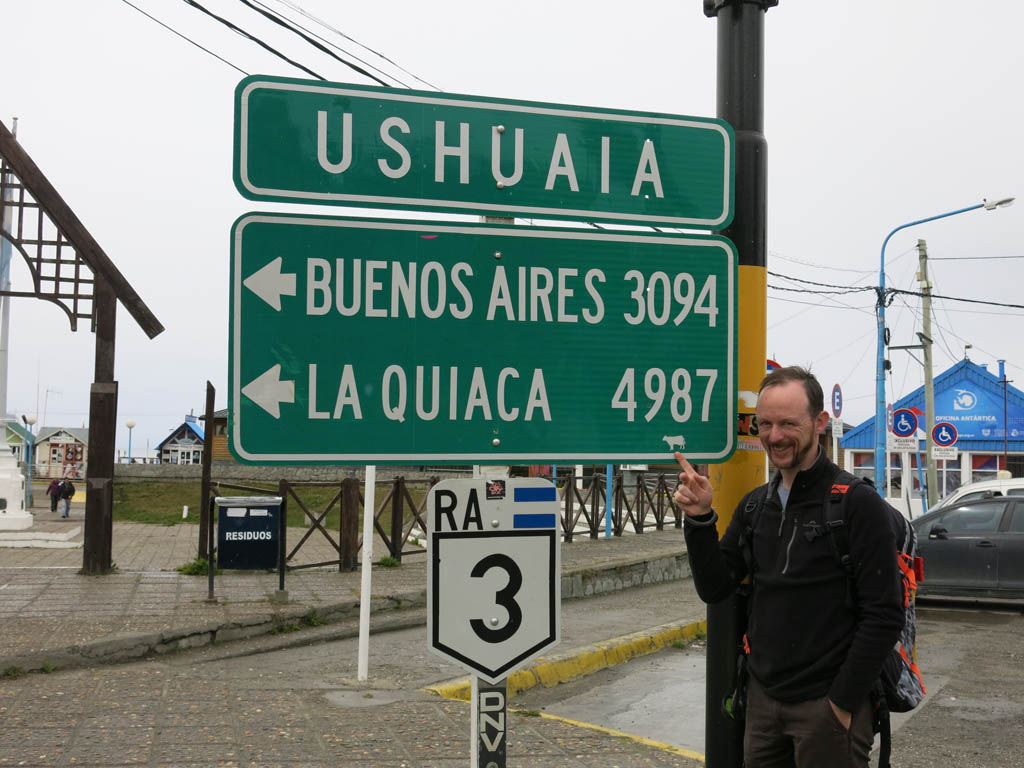 a long way from anywhere pt 1 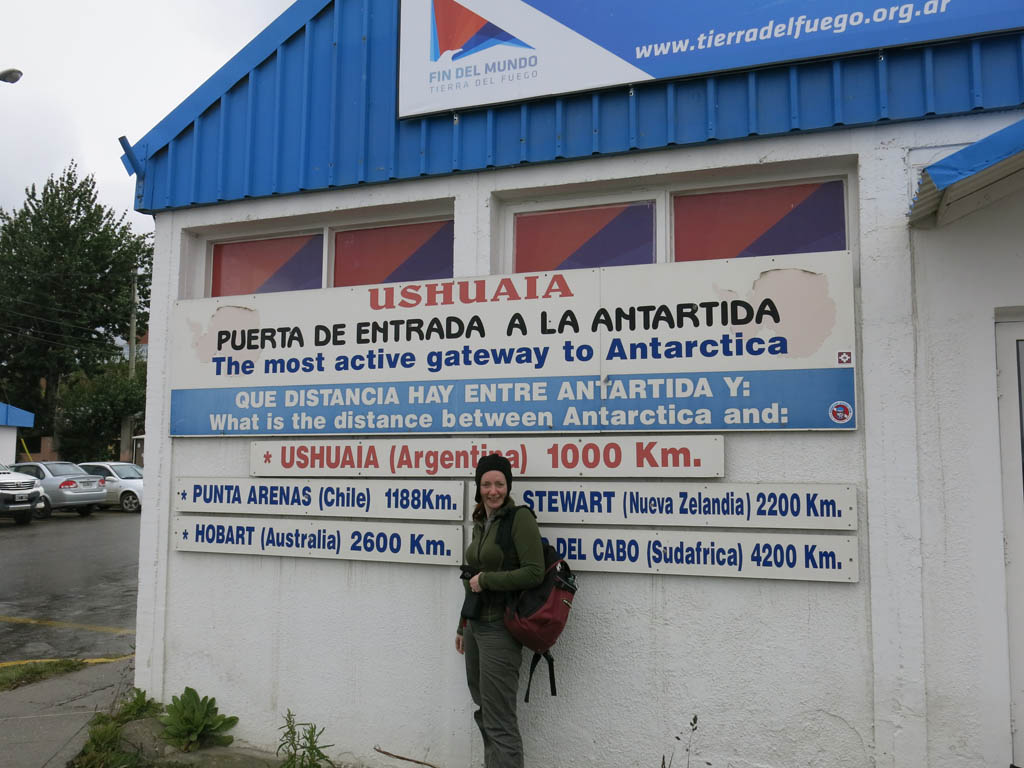 a long way from anywhere pt 2

The visit took us until early afternoon, dropping us back in town for a quick bite to eat before needing to meet up with the G Adventures group to get our passenger cards that would be our most important item on the boat. The card that makes the Antarctica trip most official! 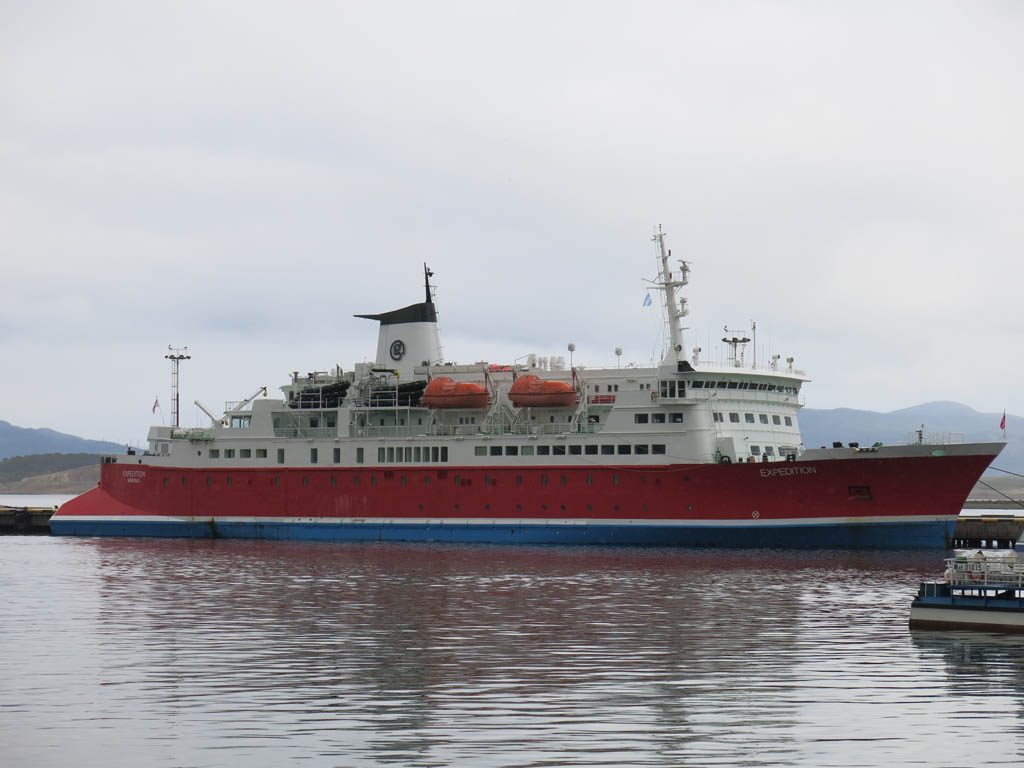 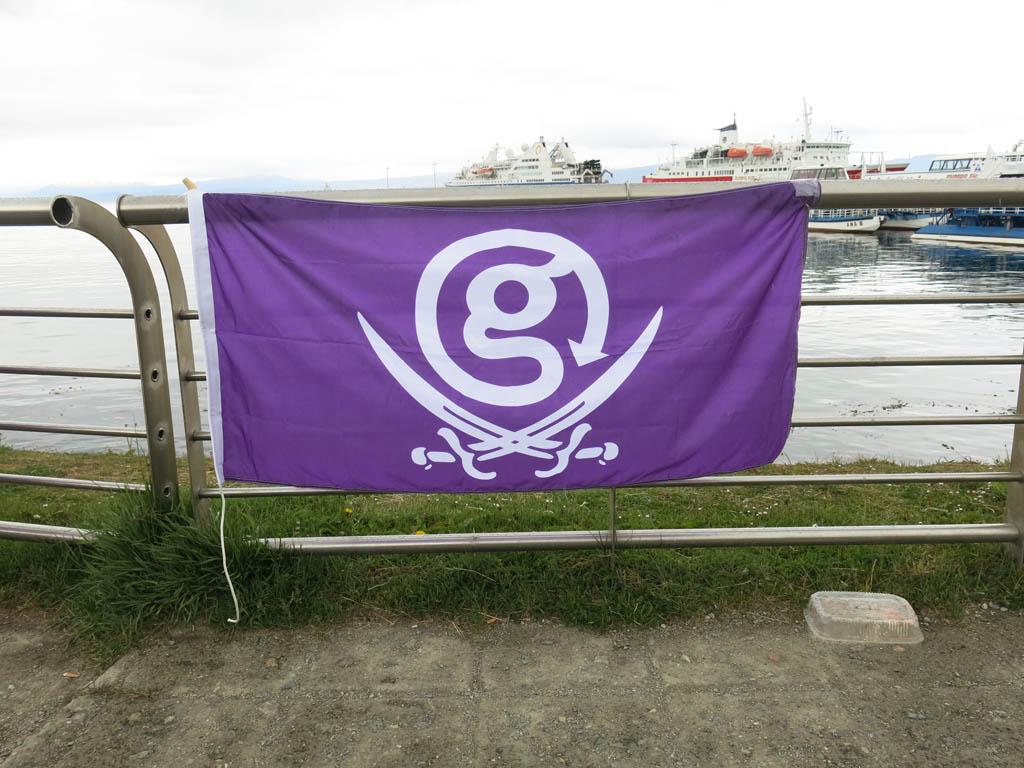 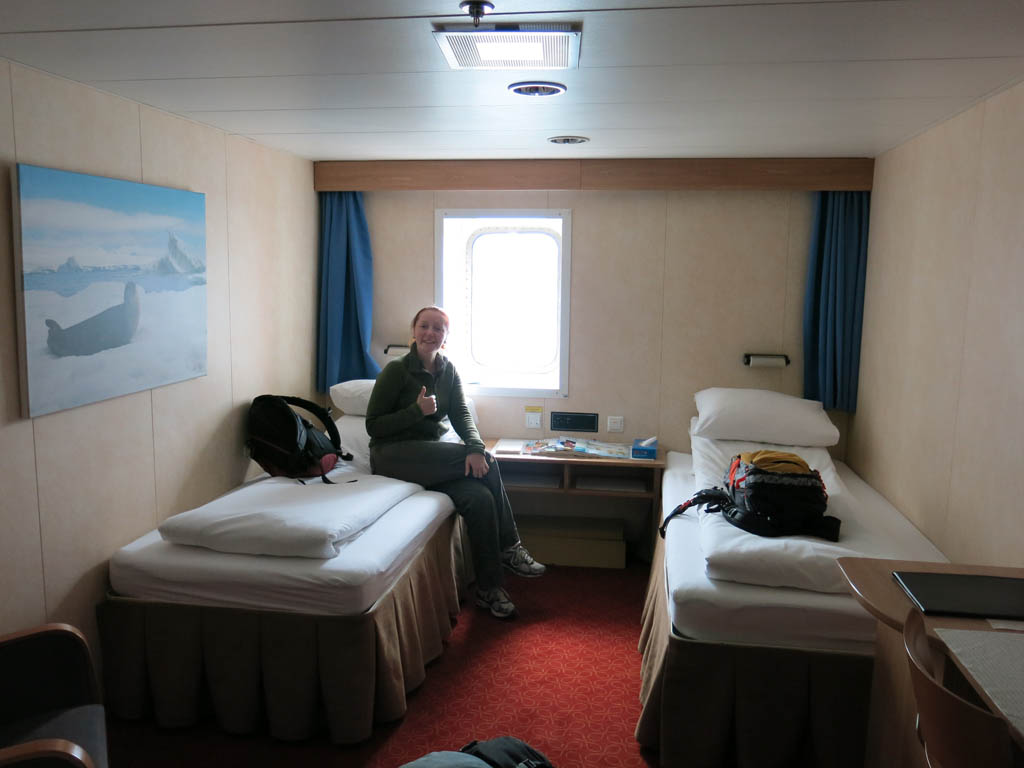 home for the next 15 days

After another hour of anticipation it was finally time to get on the boat and prepare for departure. It was getting super real by now and amazingly exciting. Just after 4pm Kate and I were on and settling into our cabin. I’m not sure why but the amenities on the boat were a bit fancier than I expected. I was expecting to rough it a little, but no, our cabin was nice and cozy, and the lounge and bar areas were super comfy. Even seeing the restaurant menu I saw I was going to be well looked after! 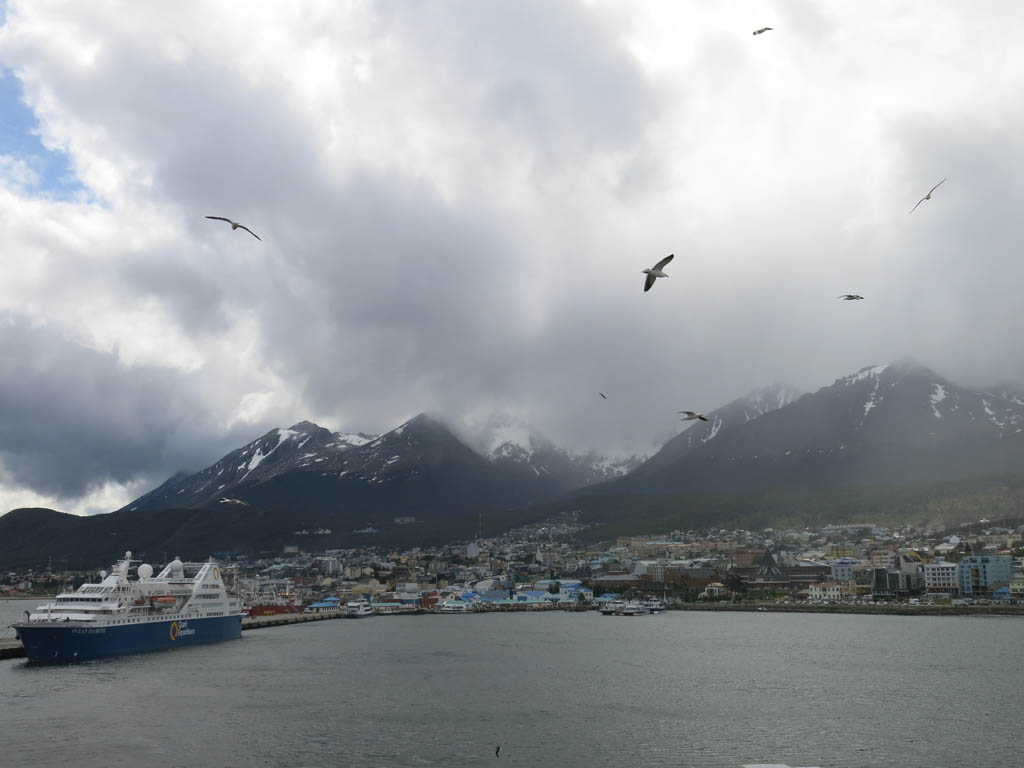 On 5pm, we departed Ushuaia, with everyone out on deck to say goodbye to the mainland and begin our 2 week expedition. It would be about 6 hours in the Beagle Channel, before reaching Drake’s Passage proper, so some time with calm waters to get to know everything we needed to know about our boat and trip. 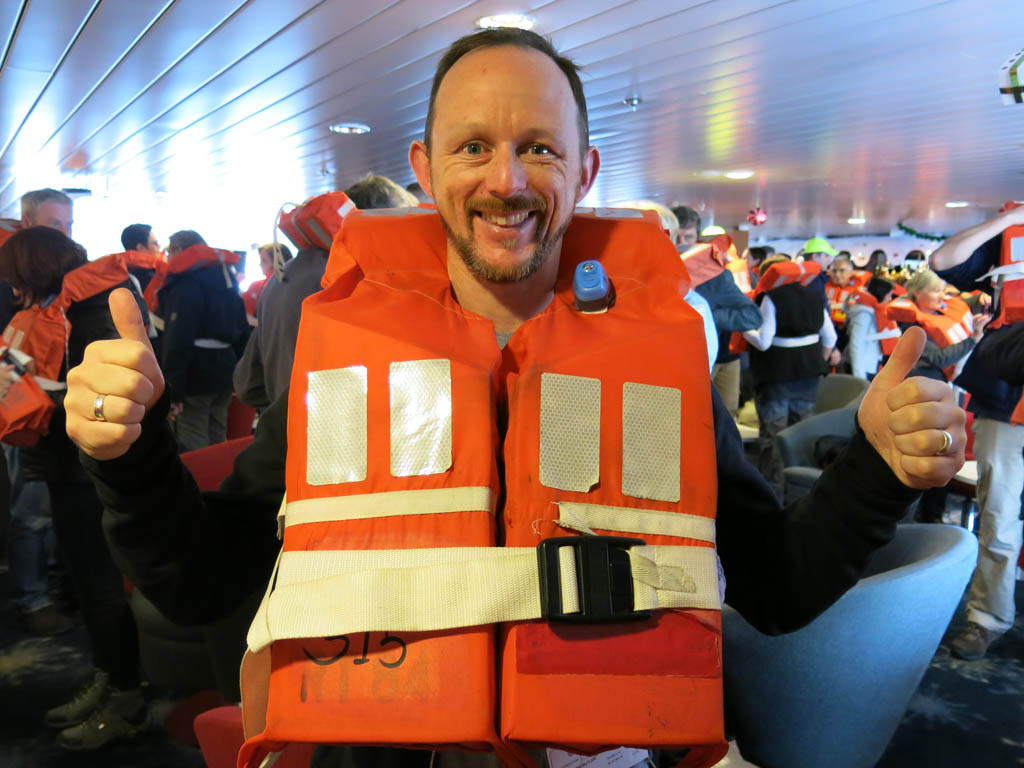 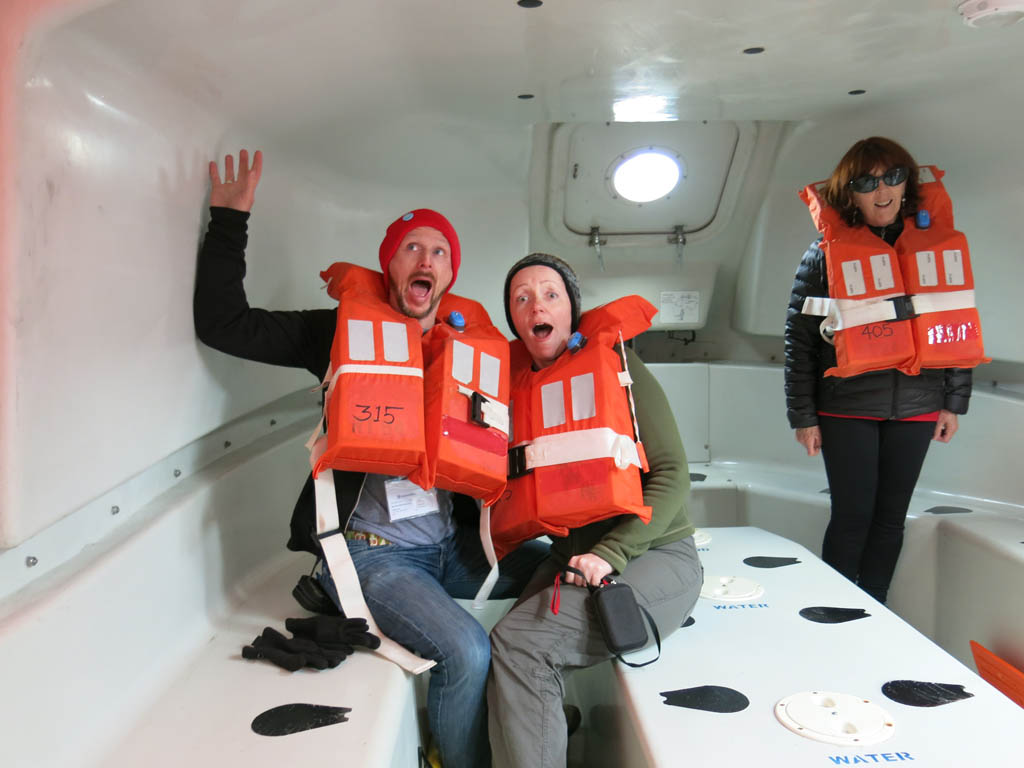 First up was a safety briefing and drill. Armed with our lifejackets we ran through all the formalities, including being introduced to our meeting points and our lifeboat. We even got to go it which was very cool! Some didn’t want to jinx things, but Kate and I rushed in to get a feel for it. Touch wood it would be the only time we ever see the inside!

After that was an introduction to all the crew and guides. I guess you would have to be an outgoing type to do this job, but everyone was so lovely and enthusiastic it made it impossible not to be beaming from ear to ear and what lay ahead.

Suddenly it was time for dinner, with a delicious 3 course meal. Man, I’m not sure I will be able to handle eating so much food! Again, I wasn’t expecting such a fancy experience, but I guess when you are paying a significant amount for such a trip maybe that is what many people expect. 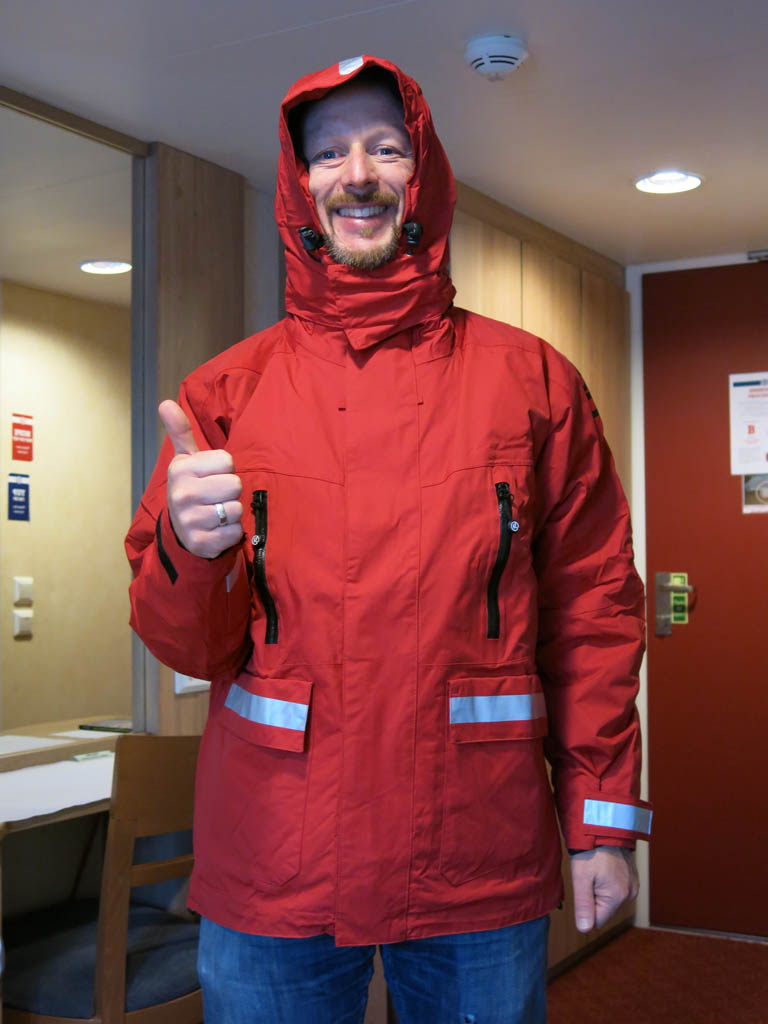 It was an action packed night, as as soon as dinner was done, Kate and I went to grab our expedition parkas. Everyone was being given the same bright red heavy duty parka as part of the trip, so within half an hour the boat was a sea of red. A nice perk, although how to get it home?!

Things were not done yet, with an initial briefing scheduled for the two dozen of us that had chosen to go on the optional kayaking adventures. Rather than take zodiacs out exploring each time, we have the option to jump in a sea kayak and explore. Everything we had read and who we had spoken to said it was a must, so we were super excited (if a little daunted) by the idea. The initial briefing was just to meet everyone and for Mark the kayak master (that’s what his badge said) to reiterate that while it would not be super challenging, it was to be taken seriously. Kate was getting a a little nervous, but I was sure a first trip out would quell those worries. 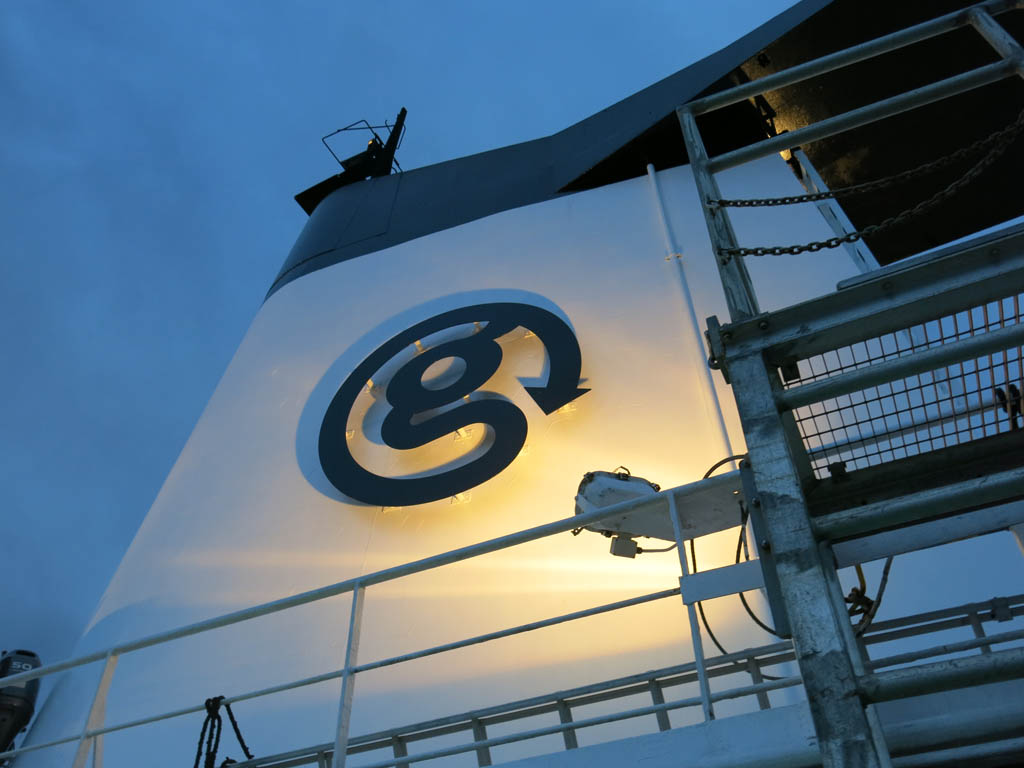 Phew! What a crazy, busy, overwhelming day! We were now all done and could settle in for the evening. While Kate took the opportunity to wind down, I was still buzzed so wandered the ship some more. It seemed many had decided to head to their cabins to try and get some rest, but some of us wandered about. 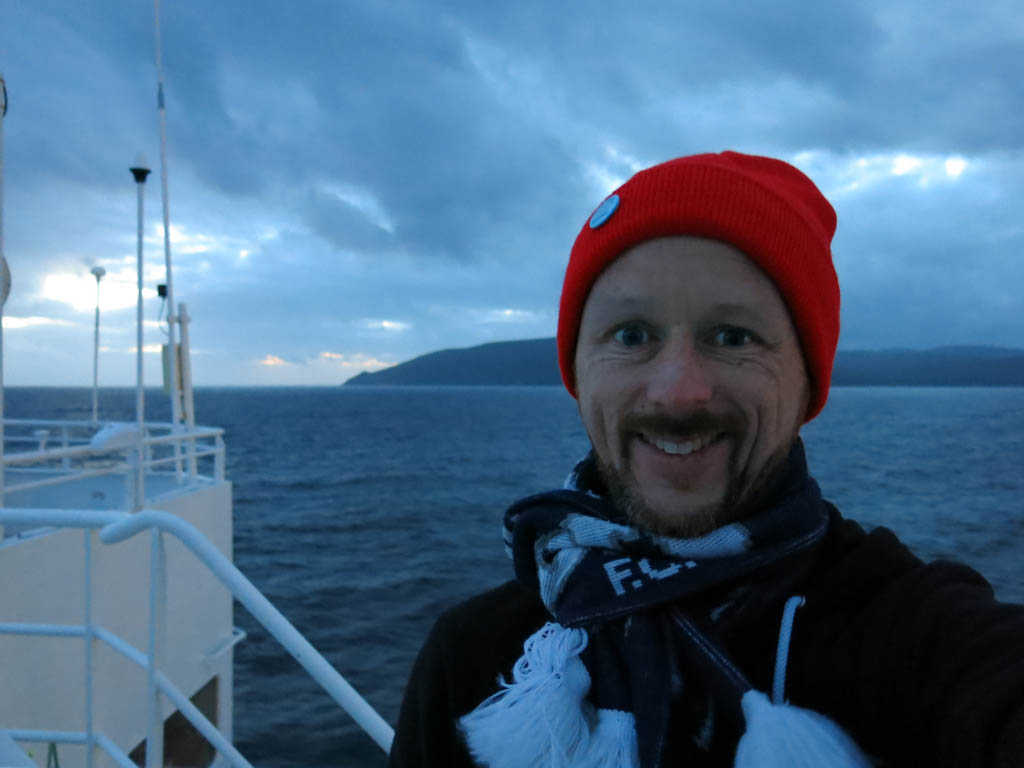 I was keen to see the end of the earth (well, Argentina) and the official entrance to Drake’s Passage. At about 11pm we saw our last land and only open water to the south. It has begun!