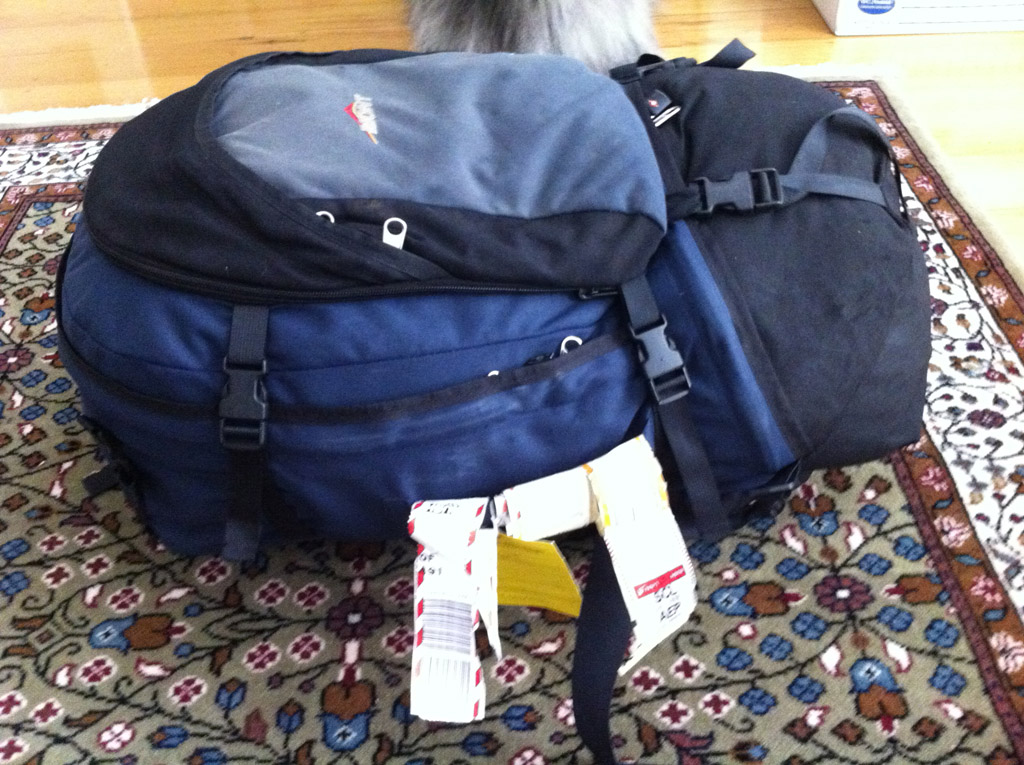 Like a classic Hollywood film, the final act has produced a happy ending… Matt and his luggage are back together at last! With no thanks at all to LAN airlines, I got my hands on my bag this afternoon at Melbourne Airport.

I like to keep this blog super positive and be all about good times all around the world… so I don’t want to drag it down (especially after an EPIC trip like we just had). But I do want to rag on LAN Airlines for a quick bit. So feel free to ignore the rest of this post if you like and just revel in my good news.

Anyway, LAN didn’t do much to endear us for the whole trip. They were good in the air, but everything else was pretty terrible. My bag going missing was just the icing on the cake. During our trip, LAN messed with our itinerary quite a bit… cancelled flights (making us lose most of a day at Iguazu), rescheduled flights, 3 hour delays. Yep. The customer service with my bag though, well, it was non-existant.

Bags don’t make flights sometimes. Travel enough and it is bound to happen. Mine didn’t turn up at Santiago from Buenos Aires on our way home. I was pretty relaxed about it. It happens, plus it was on the way home. I was still buzzing from the trip, so no big drama.

They were somewhat helpful at the time of reporting, although there seemed to be some confusion as to where my bag was. But through a friendly pilot helping to translate, we established it would be on its way to Santiago the next morning, with time for me to get it and check in to the flight home. Cool! It meant that I had to collect it at 9am and sit around for our flight at 1:30pm, but I would deal with that.

So next day I arrive at 9am only to be told it won’t arrive until 11am. Damn. Shouldn’t have checked out of the airport hotel. So sitting around until 11am, the next response was “It has arrived, they are collecting it. Come back in 20 minutes”. So I did. Then stood around for another 30 minutes, only to be told “They can’t find it”. And then awkward silence. Nothing. The staff just left it at that. When I asked what we do next, they just shrugged and went back to whatever they were doing.

It was fast approaching 1.5 hours to our international flight left and we hadn’t checked in, so knowing I at least had an open case number, Kate and I checked in and headed for Sydney, with my bag who knows where.

OK, so these things happen. I was more annoyed than worried. I figured I would hear from them by the time I got home, when they would inform me of what was going on. So how many times did their great customer service people contact me in the last week about my bag?

Yep, LAN never let me know what was going on, even though everything said I would be emailed and called with each progression. The best I could do was to log on to a system that was sporadically updated. I saw it was apparently tagged for a new flight to Sydney, but then saw nothing for 4 days. Then it was checked to Melbourne. Again nothing for a couple of days. During this time I sent two messages to them, never hearing back.

Then this morning I log on to see what is going on and find my case had been closed. I now had no official record of it, and with no bag to show for it. Damn.

The local LAN number could only deal with ticket enquiries, all baggage enquires had to go to Chile or Argentina. So I called Qantas, knowing that it APPARENTLY went to Melbourne on a Qantas flight. The Qantas staff were helpful, but only to the point they said that it was a LAN thing and they could not do too much. But that if I wanted to try and speed things up I could visit the airport and try and find it.

Off I went to Melbourne Airport. Again, the Qantas baggage folk were helpful and took me to look for it in their storage. Lo and behold, there was my bag waiting for me! Since Sunday! Apparently they would have dealt with it at some point, but again as it was a LAN issue, it may have taken a while. So I proceeded to hug my backpack.

Ah! That feels better to get it off my chest. As I mentioned, these things happen, but hearing absolutely nothing from the airline and having to go chasing it myself is very ordinary. I will be being sure to let them know.

It is funny how when it first happened I was sure there was not too much of sentimental value in the bag. The thing that was going to be the drama was both Kate and my big Expedition parkas. Otherwise, I thought there wasn’t much. Then you think “oh man, my favourite beanie I bought in Iceland is in there!”. Then “oh man, my Melbourne Victory scarf I bought in season one is in there!”. Etc etc. It makes me think about what I should actually take with me next trip.

Anyway, alls well that ends well! Thanks for putting up with my rant 🙂

edit:  I just noticed my luggage tag was stolen from my bag on its way back. Kate’s Disneyland one got taken earlier in the trip too! Jerks!