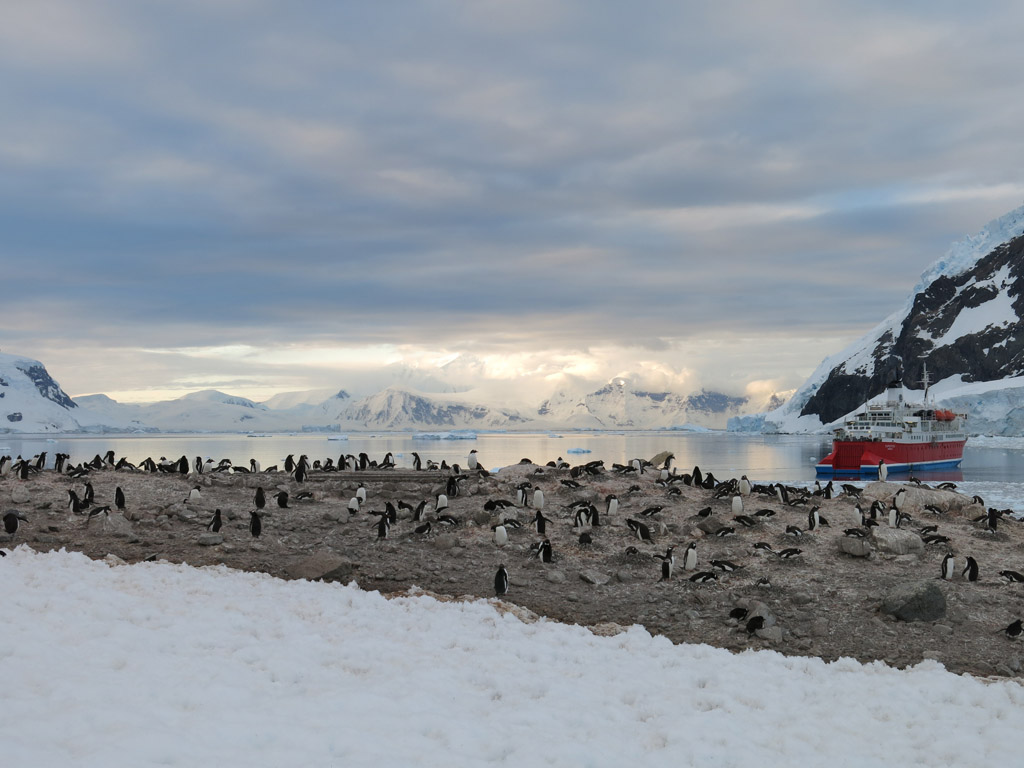 Whatever I write in this blog entry will not do today any justice. Nor will any photos… but I shall give it a go.

Today was Christmas Eve, and we had officially arrived in Antarctica late yesterday afternoon. We had the exhilaration of seeing land after 2 days on sea, as well as whales as we approached. Today was something else though. The clouds had disappeared to reveal an AMAZING snowy, mountainous landscape. As we headed to our first destination, we passed many many icebergs of all sizes. Best of all were the many penguins hopping about on them and swimming dolphin like in the waters about us. 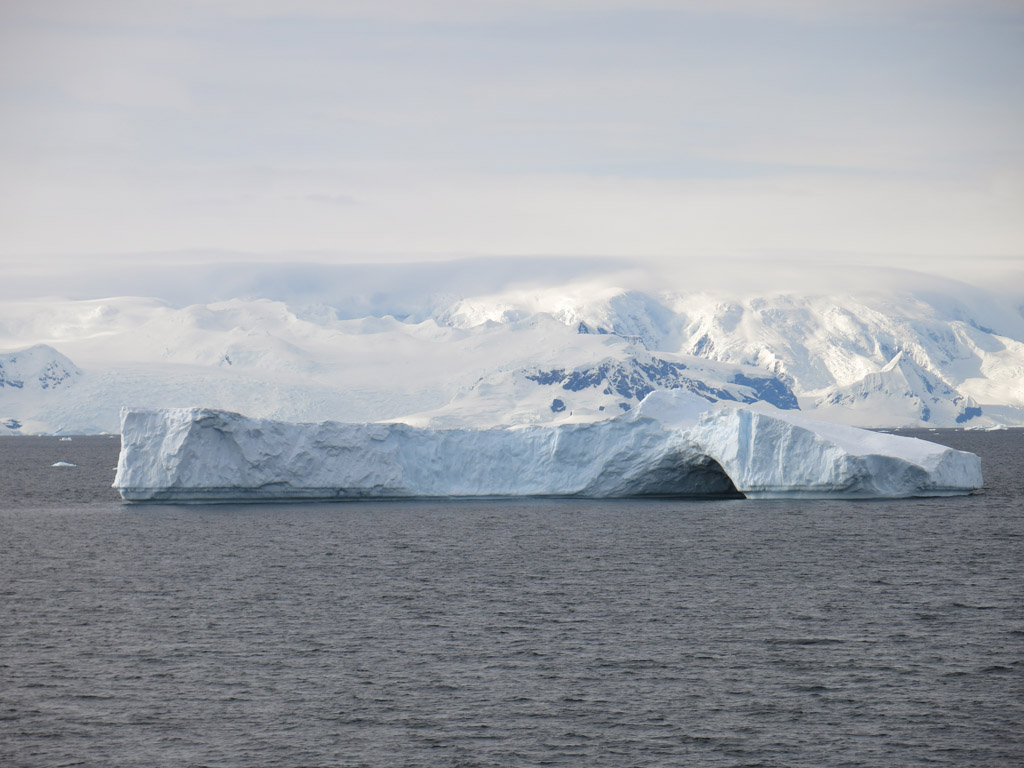 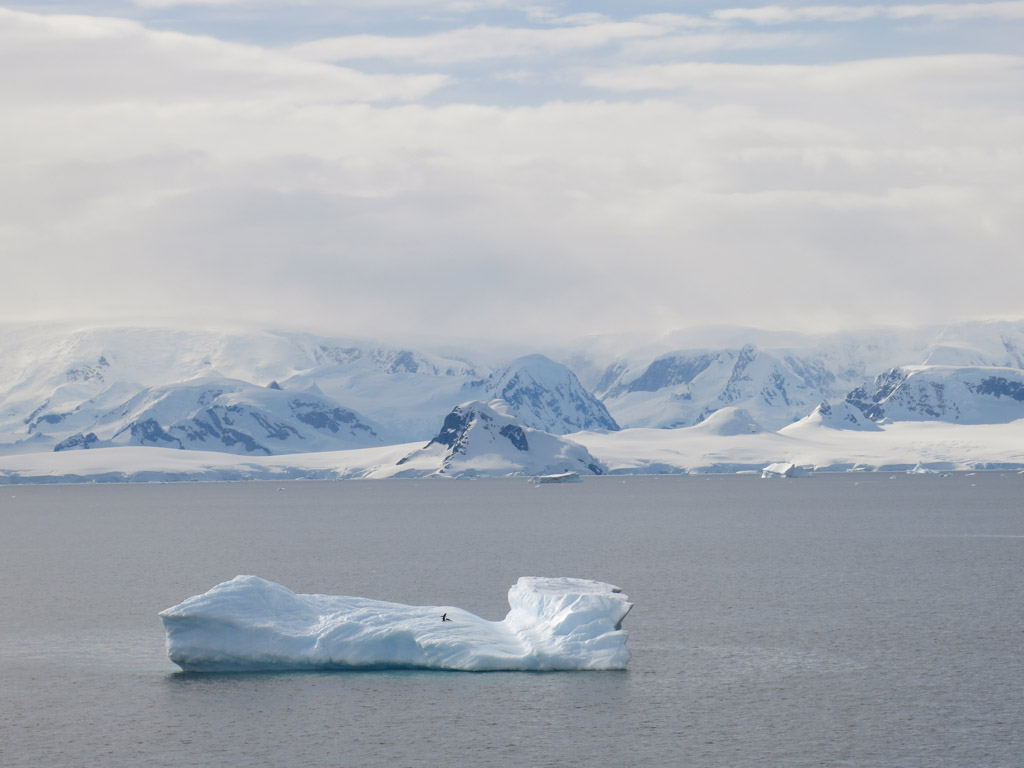 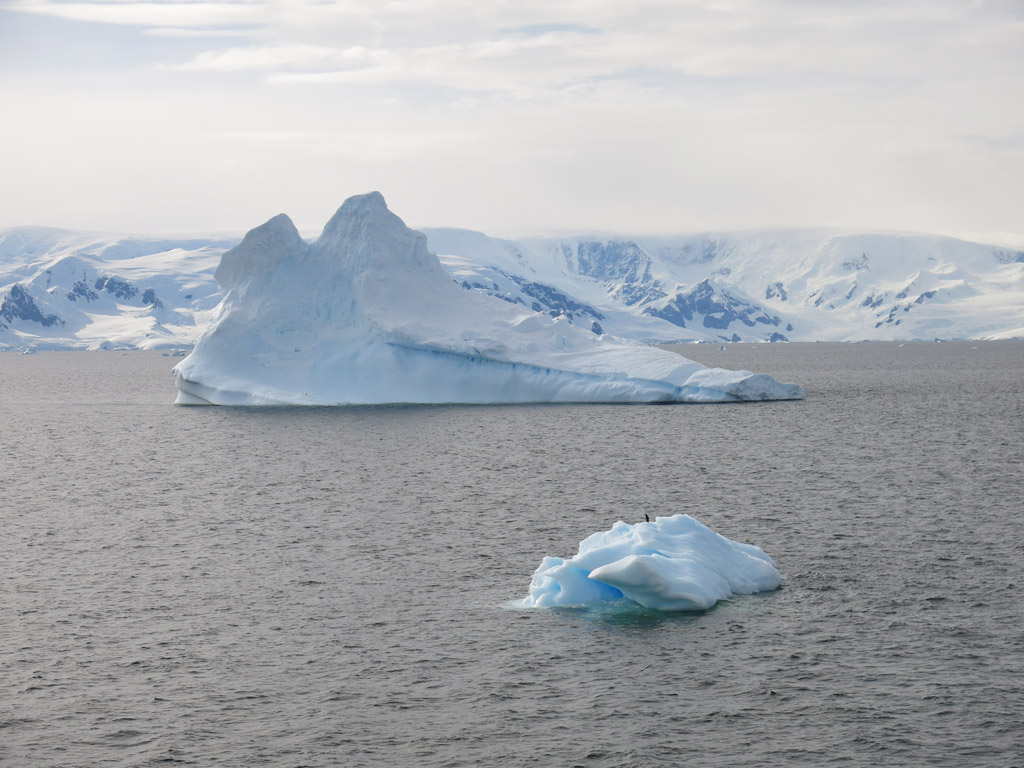 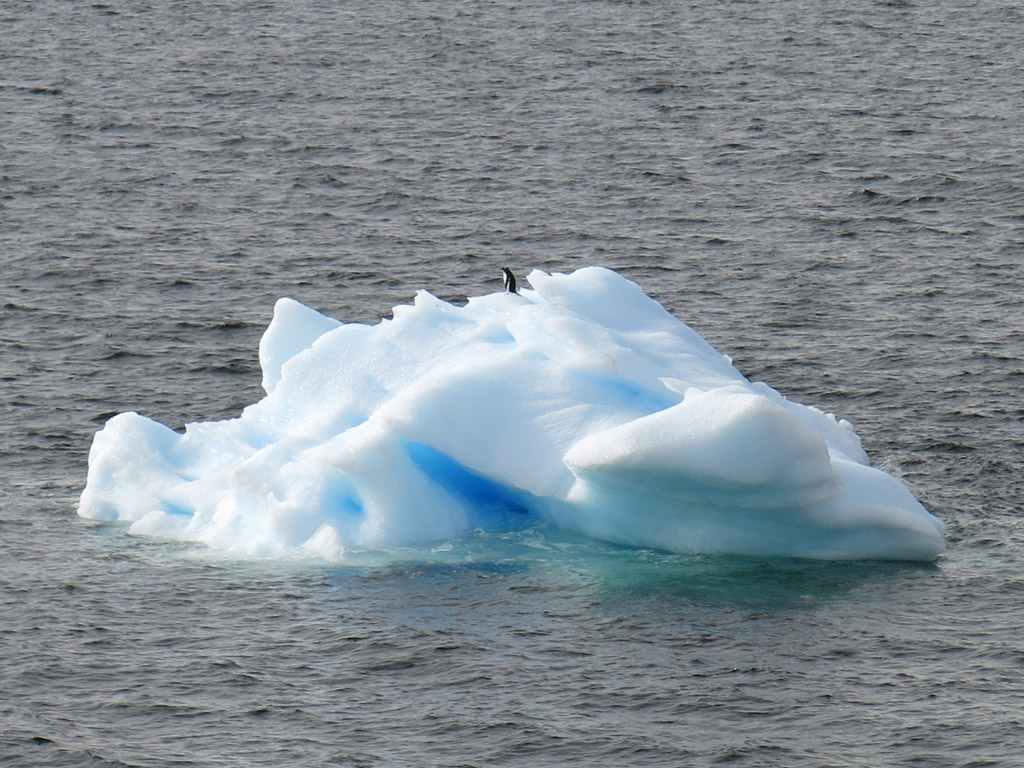 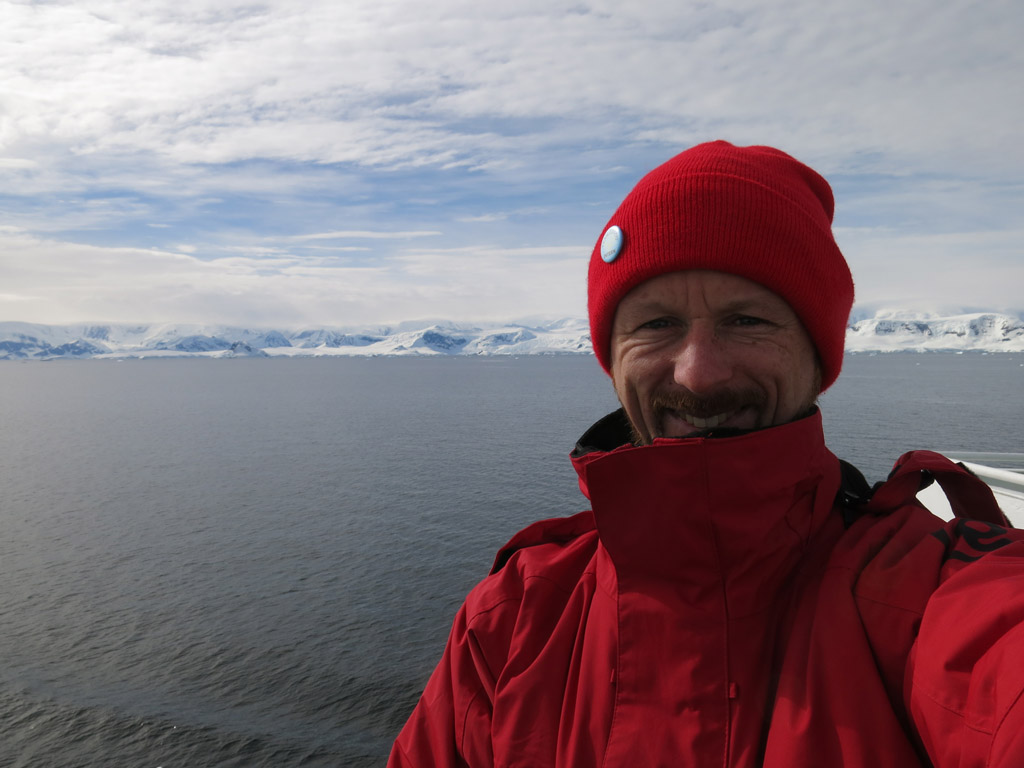 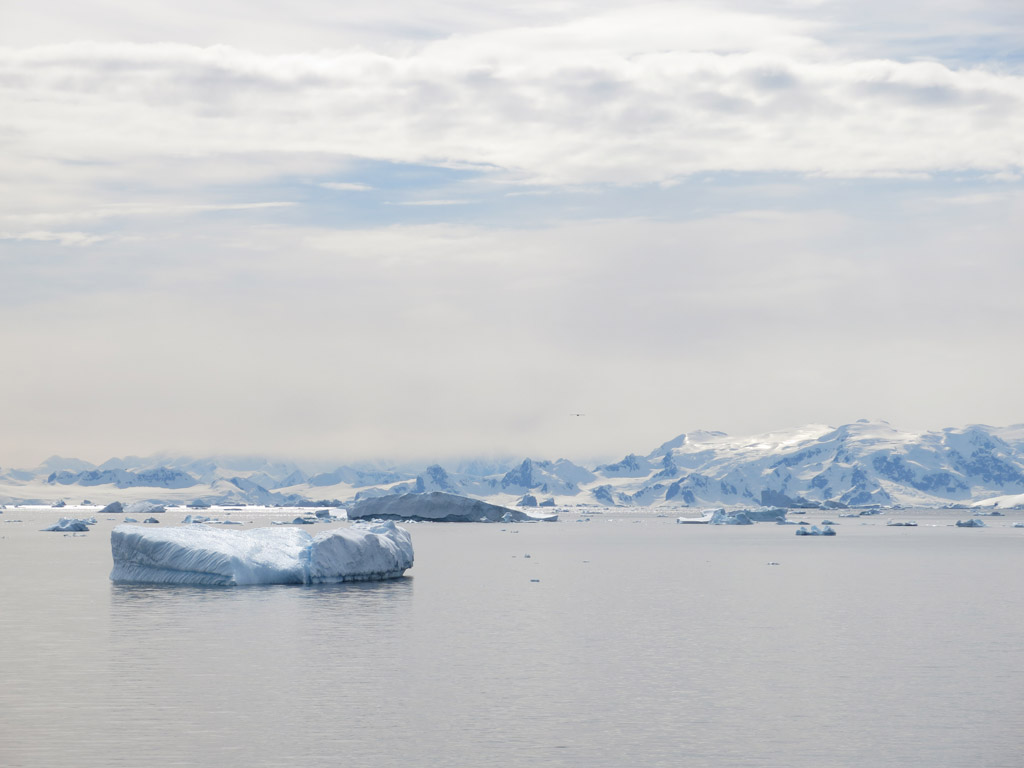 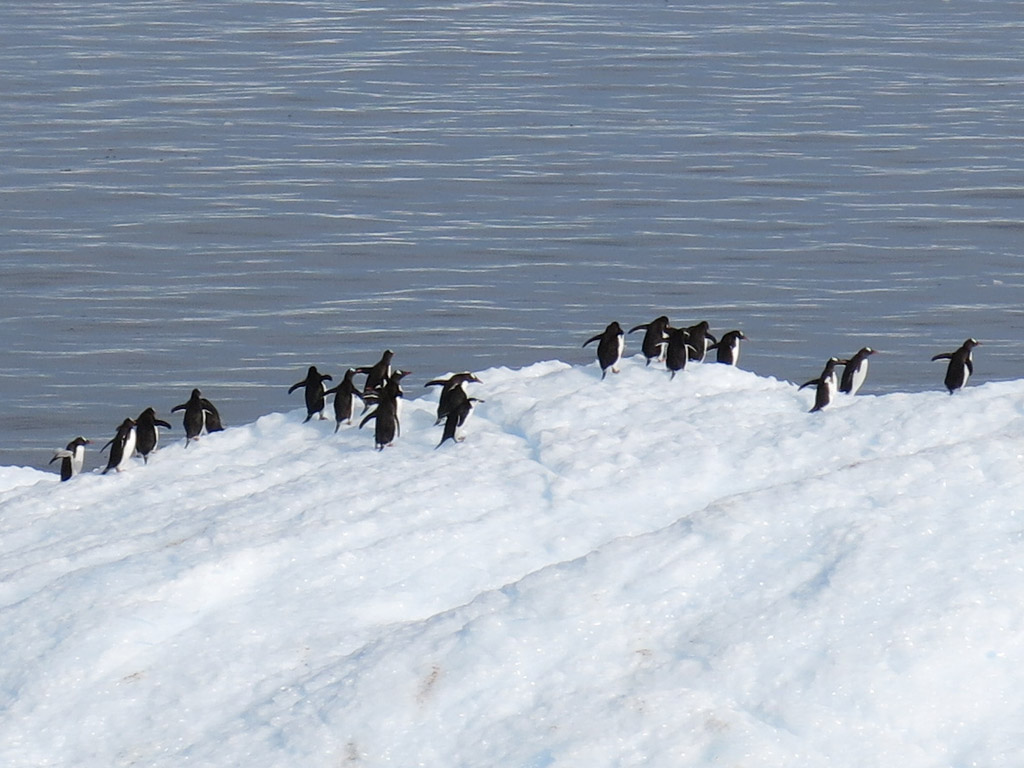 It is funny how you get so excited by seeing the fringes of Antarctica, and then things only get better.

Bright blue skies greeted us at our first stop, Cuverville Island. My Antarctic geography is not great (I will have to provide an Antarctic Peninsula map at some point), but this island was home to a few penguin colonies. It would be the first cruise on the zodiacs for most, and the first kayak opportunity for us.

So with that we had a kayak briefing early on to let us know the plans. We would be getting ready for the kayaks as early as we could so we could spend a few hours out there in the waters surrounding the island. So with that, Kate and I got ourselves sorted and waiting for the call up. 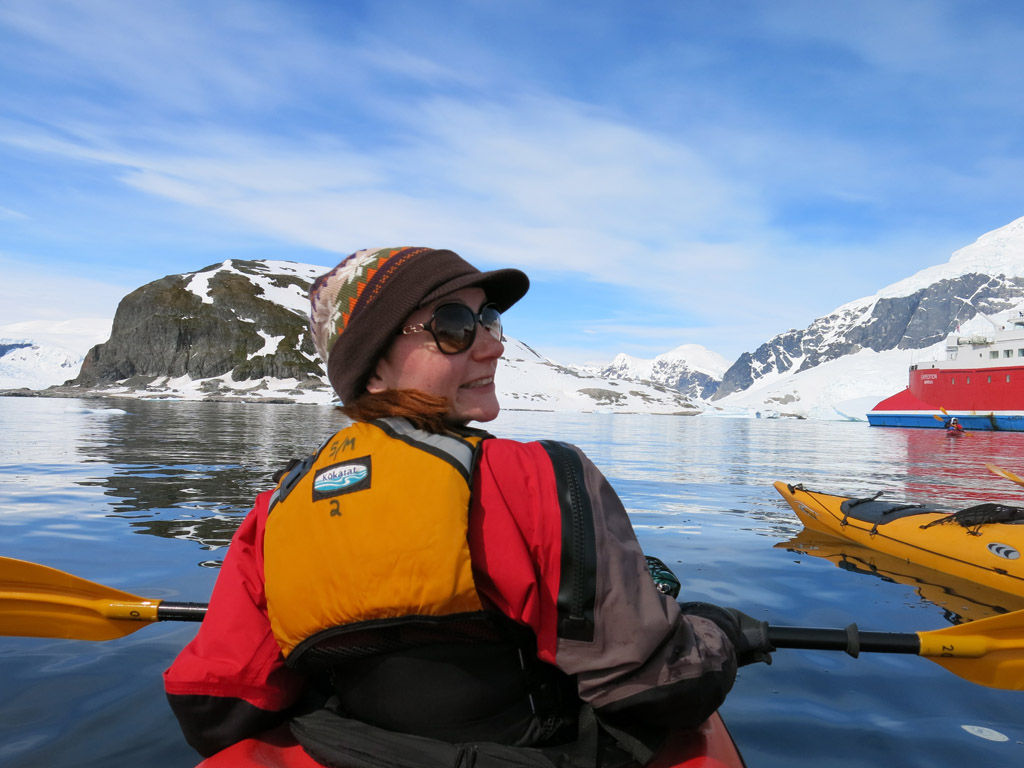 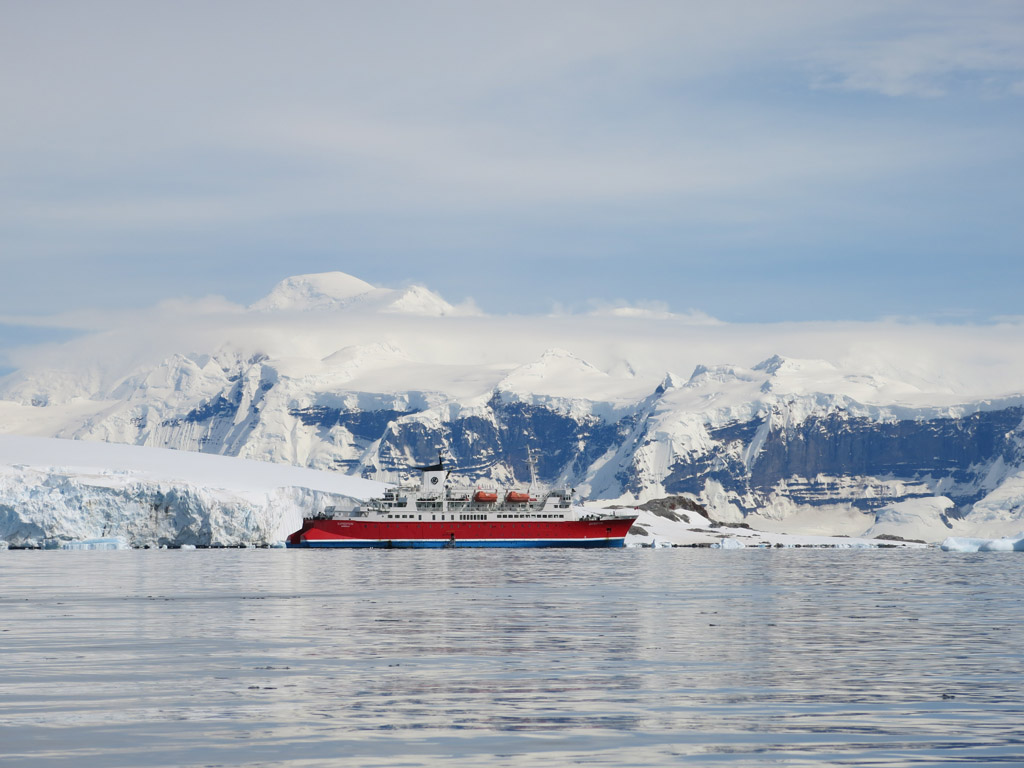 When we got it, it was all systems go. For the first time the group had it down pretty well. We all suited up and got the kayaks out on the water quite quickly. It took about 15 minutes to get everyone out on the water (there were 10 double kayaks to manage), and we had the original plan to circumnavigate the island. That quickly changed when one of our kayak guides Phil spotted whales around the island. Executive decision! We would go whale spotting. 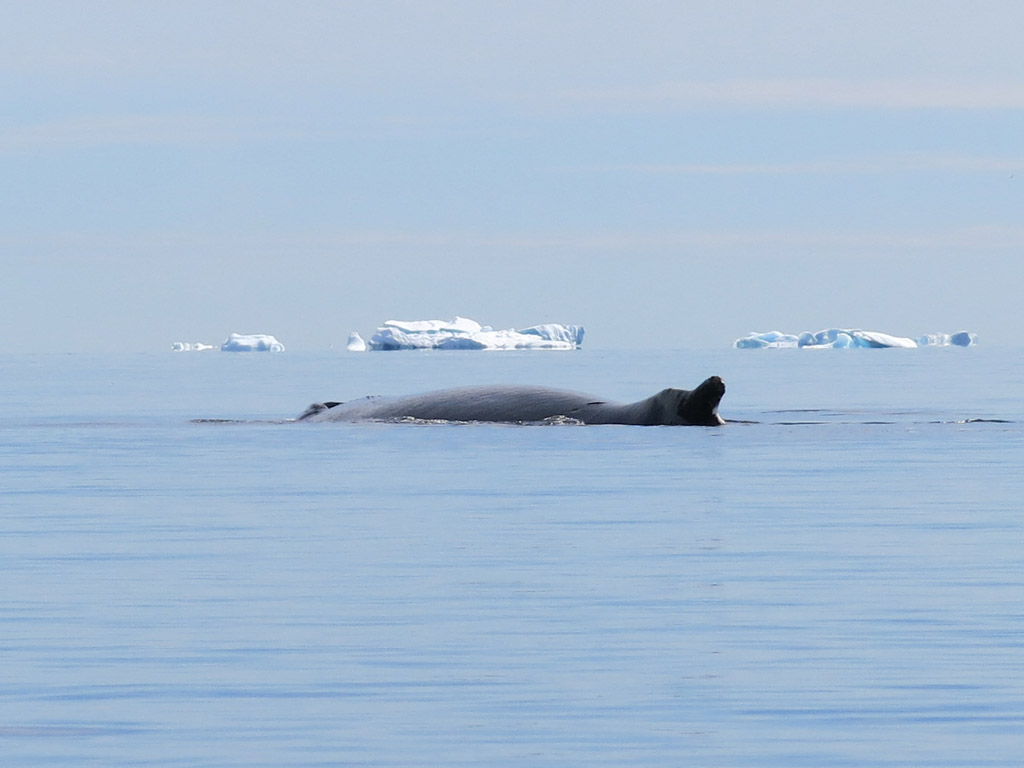 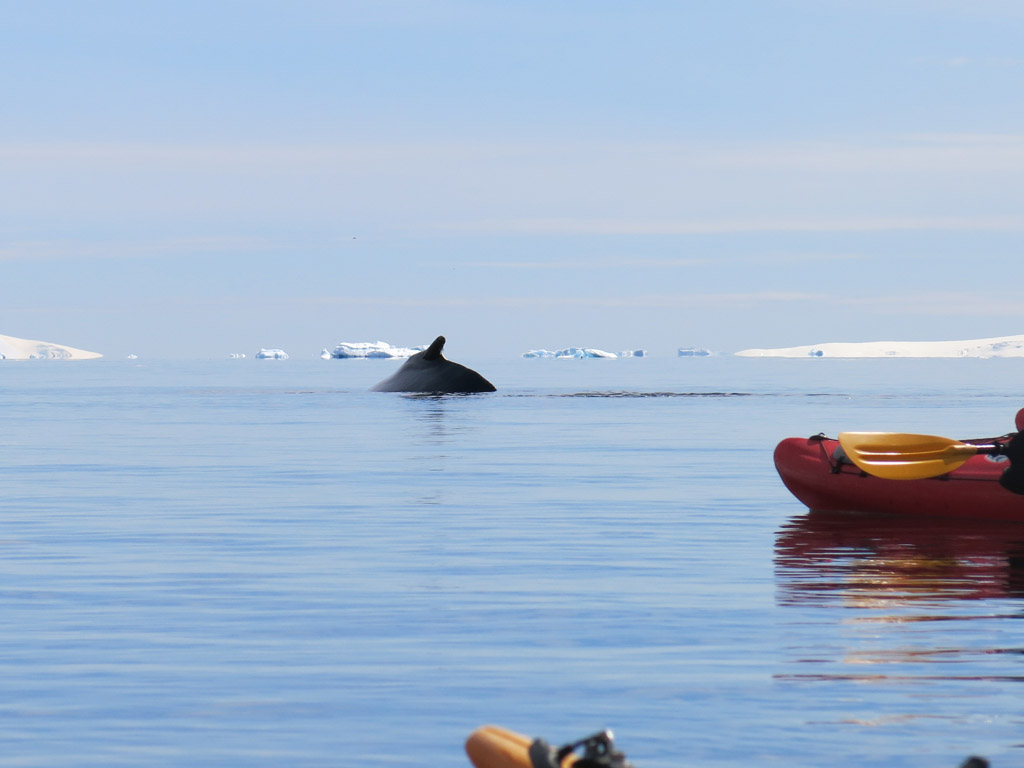 So off we went, chasing whales of sorts. We didn’t get too close, but we drifted around for about an hour, observing the whales as they surfaced. They were humpbacks, clear from the hump on their huge backs. 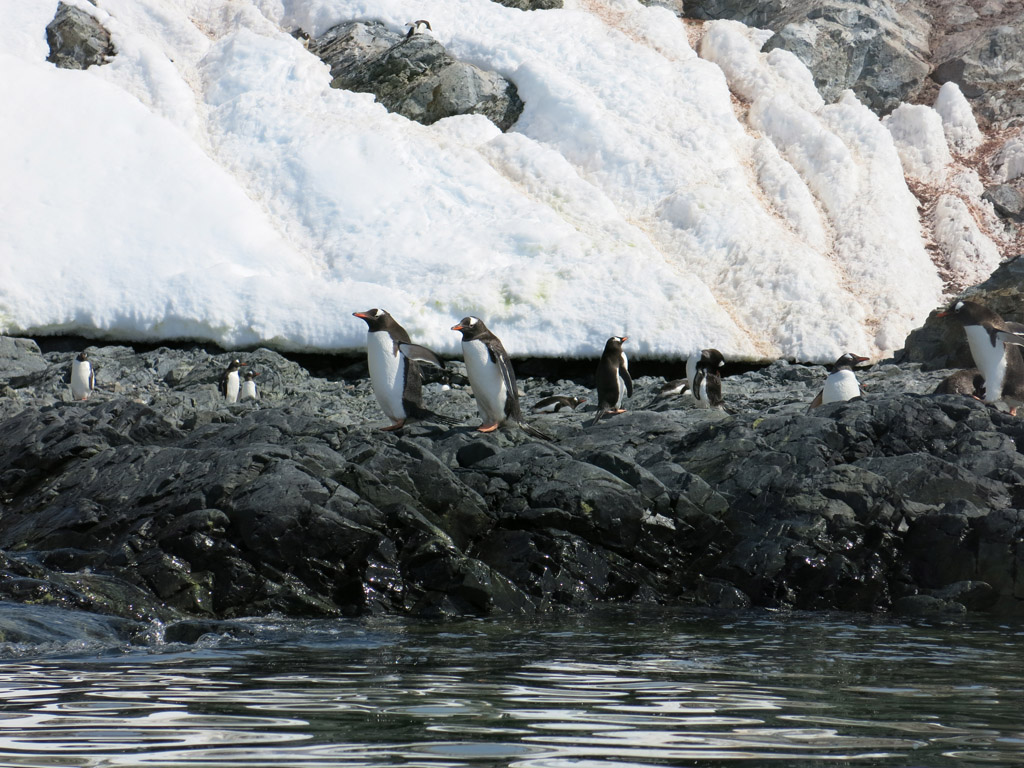 As the whales started to disappear we kayaked closer to the shore of the island to observe the penguins. They were hilarious, hopping around the rocky shores and the ice. Total clowns. We knew we would have a chance to get up close and personal with them later on, so we enjoyed the view from the water.

In no time about 2.5 hours disappeared and we headed back to the boat, all sweaty. We had all rugged up but the weather was amazing. Next time it would be just base layers and a hat I think.

It was time for a quick lunch as the boat moved to a different location, this time Neko Harbour. It didn’t take long to get there and for the boat to settle in. We also got word that camping was looking very likely for tonight on the land off the harbour as the weather was so good. Penguins, whales, kayaking amongst icebergs, and camping? Not a bad Christmas Eve! 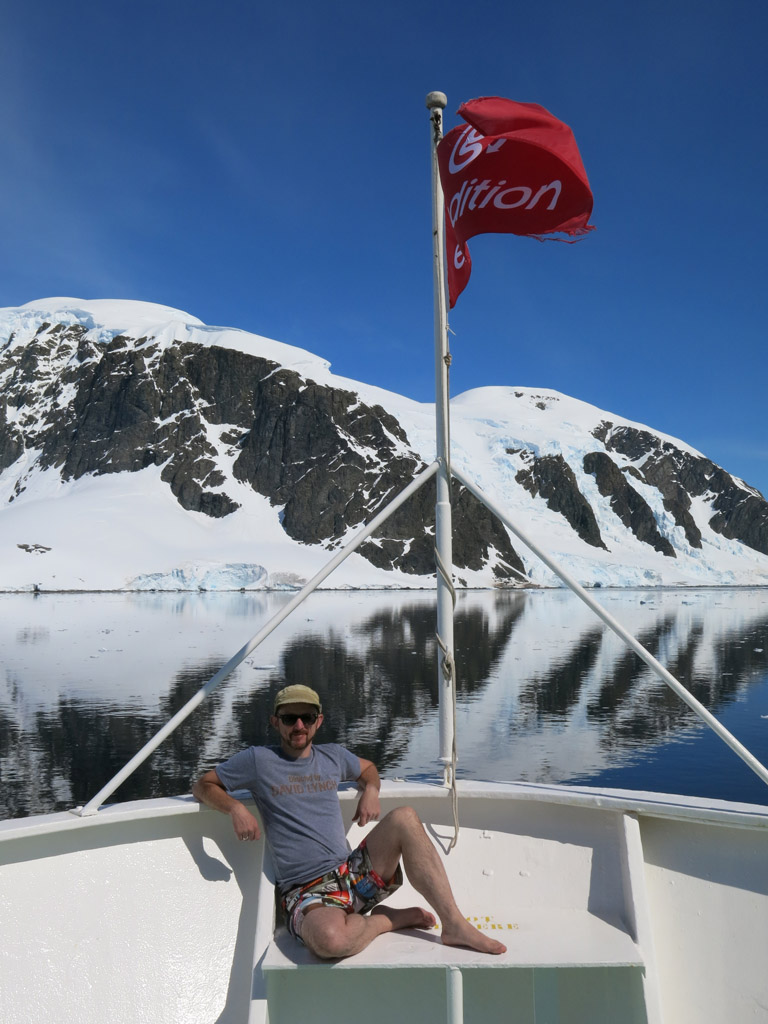 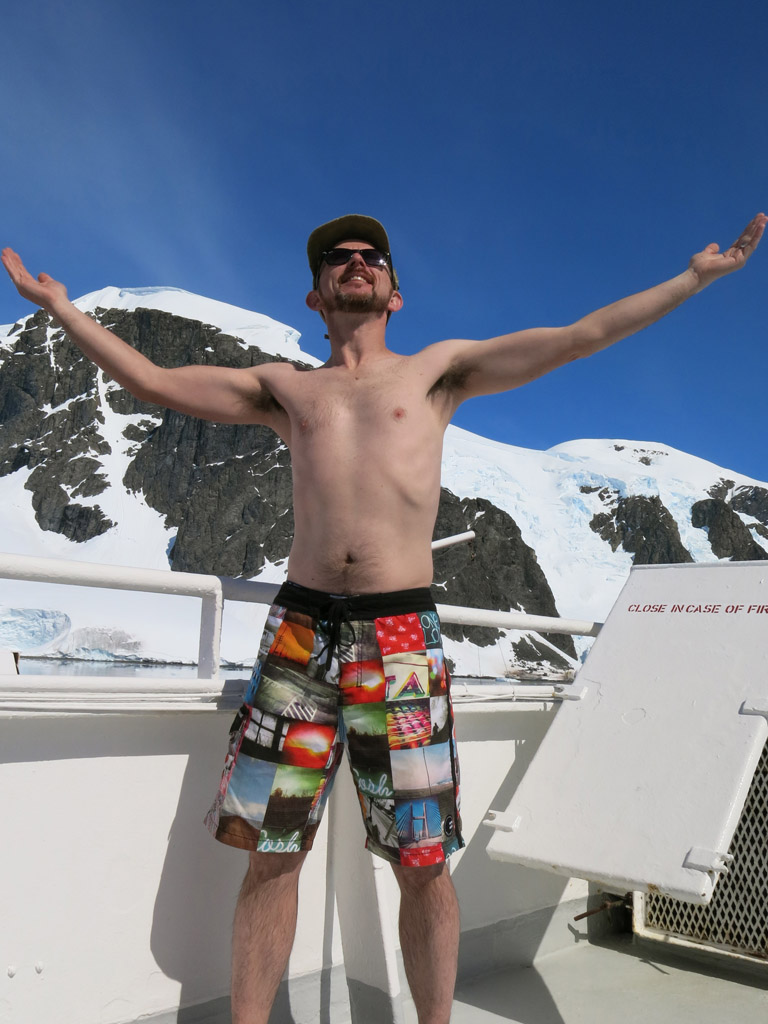 The weather was amazing. Bright sunny skies, and while it was brisk, when you were in the sun it was actually quite warming. Because of this, there was an impromptu barbecue on the back deck that was incredible. Burgers, sausages, ribs, chicken, salads… such an amazing spread. I also took the time to get some sunbathing in before our next stop. I kid you not, it wasn’t particularly cold at all.

In no time at all the announcement went over for the kayakers to meet again. Given the spectacular conditions, we had the chance to get out again. Kate and I jumped at the chance. So within 10 minutes we were back in the mud room suiting up and getting out on the water. 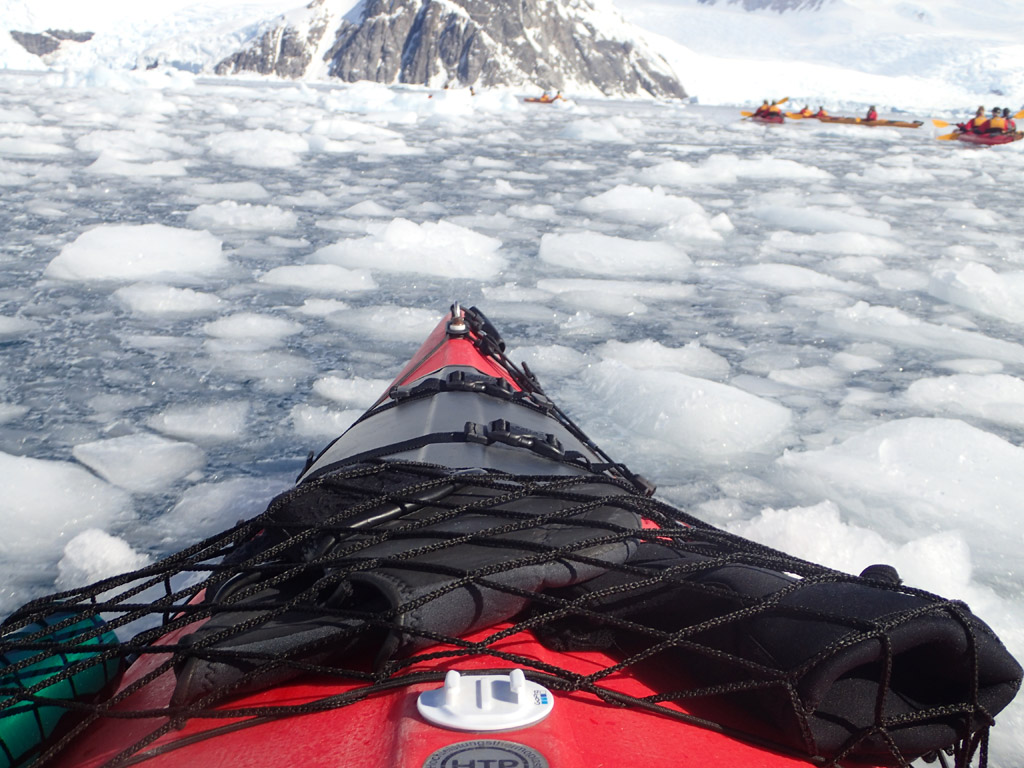 This was a different kind of kayaking experience. Rather than an island it was a big harbour with lots of ice about the shore. Our guides Mark and Phil did not seem too concerned with the small ice, and took us right into it. That way we could see the shore line with the penguins and seals, but also get to kayak through the ice. Woo! 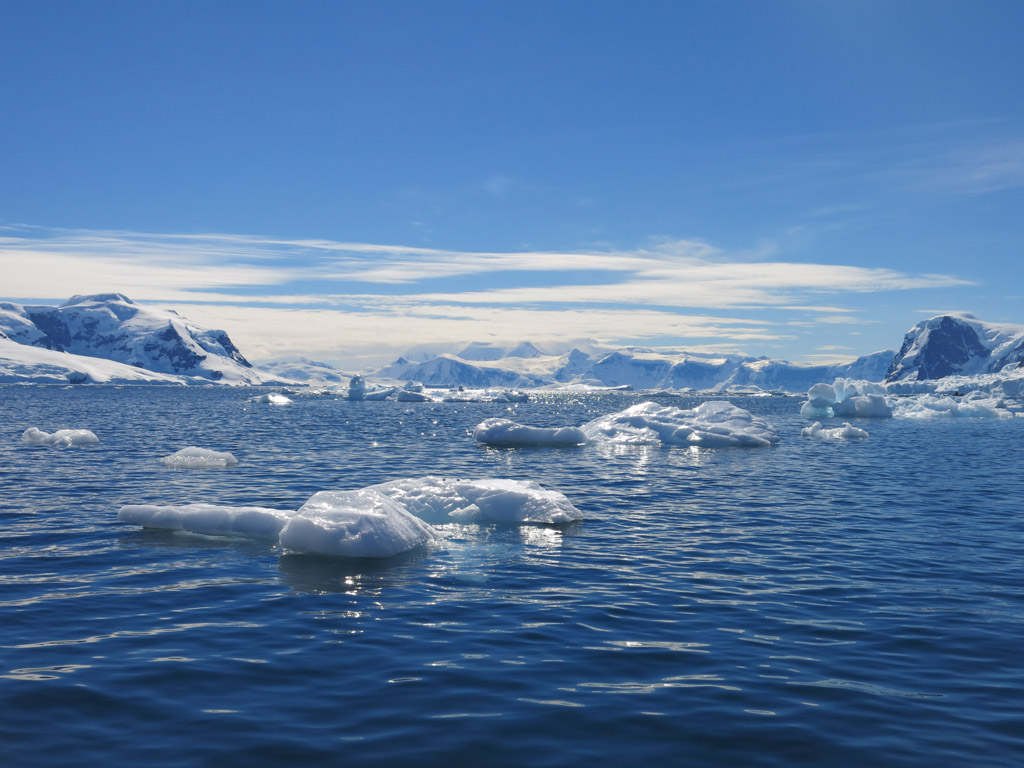 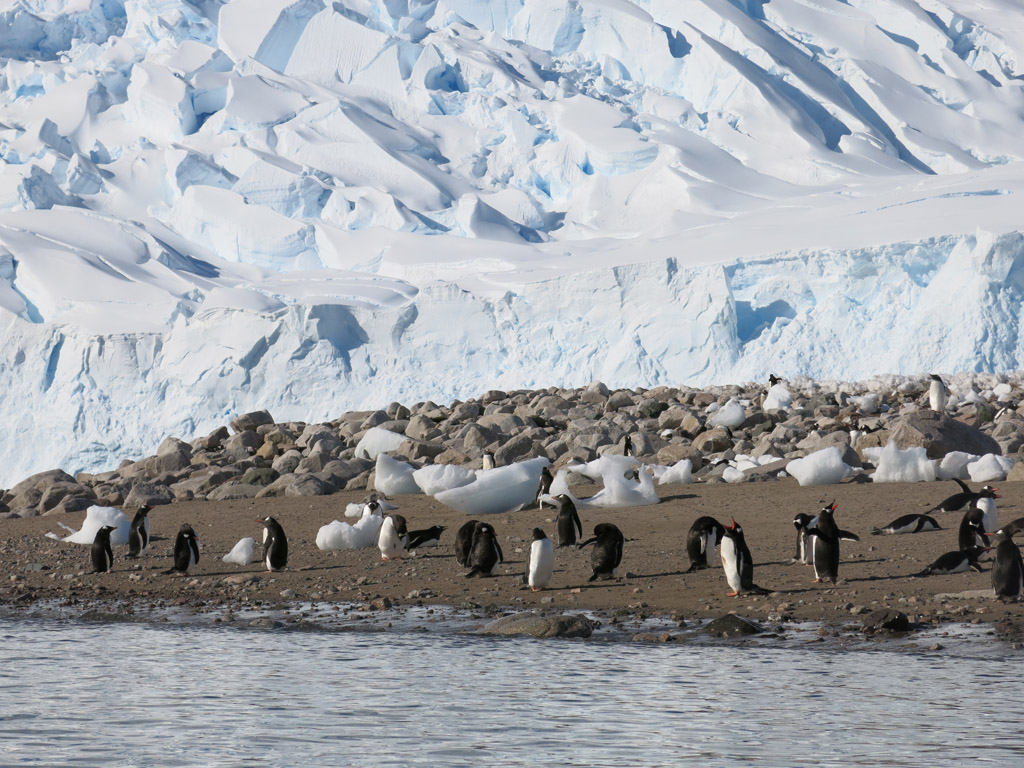 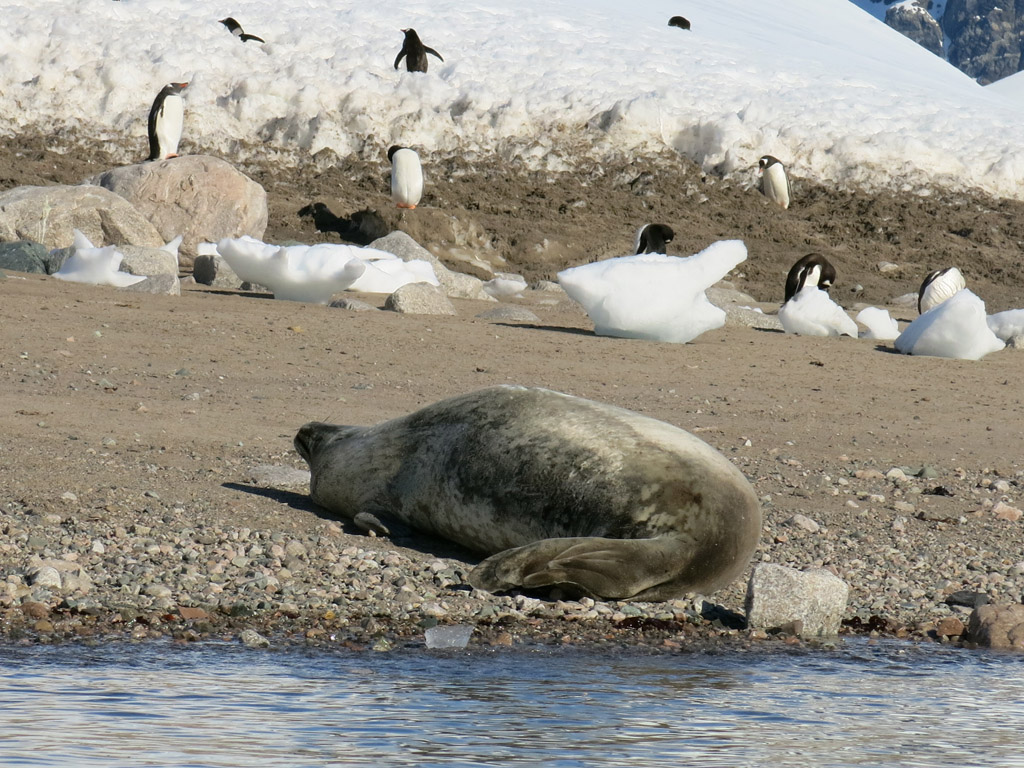 So we made our way in there, and also right across the harbour to check out some bigger icebergs and the glacier on the other side. The kayaking was certainly the way to go, as while the others got to sit with penguins for a bit and do some hiking, we got to explore other things they would not see.

Like before, about 2 hours flew by and it was time to get back in the boat. That amount of time was OK by me, as almost 5 hours of kayaking and I was feeling it a little!

We got back in, with just enough time for a quick shower and a briefing of the days events and tomorrows plans. Then it was announced that 100% camping would be tonight. Yes! We would be going on to the shores of the harbour, to play with the penguins, do some hiking and sing some Christmas carols. Christmas Eve was looking even better. 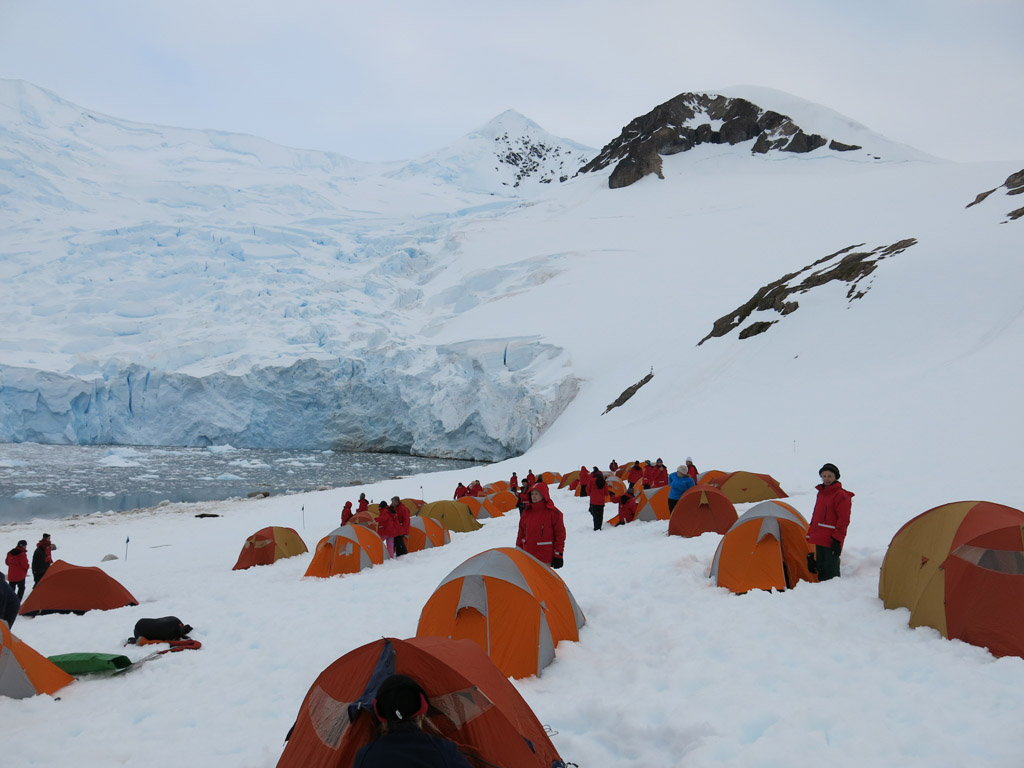 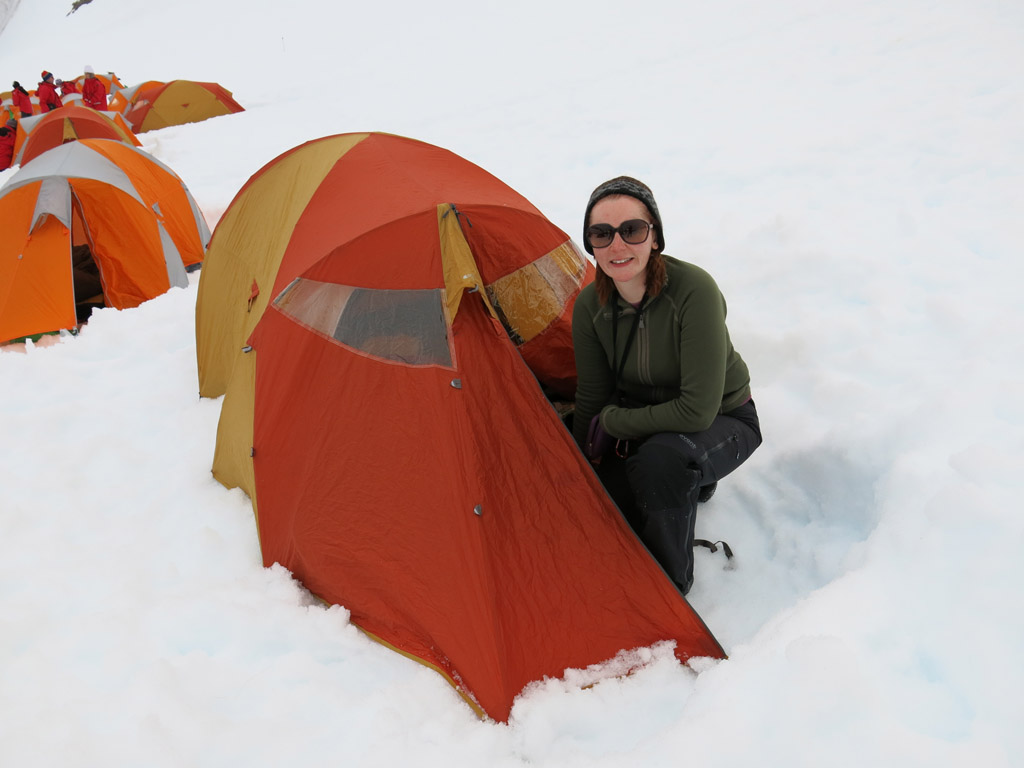 kate checks out our new pad

So once we had all our camping gear we waited for the call up to head onto shore. Into the zodiacs we went, and were whisked to our camping spot. Kate and I secured a patch of snow nearby the penguins and dug out a nice flat piece of real estate. Tent went up, sleeping bags were laid out, and we were ready for the night!

But it was still early, so while Kate went off to snap pics of the penguins, I went hiking up a ridge to over look the bay. 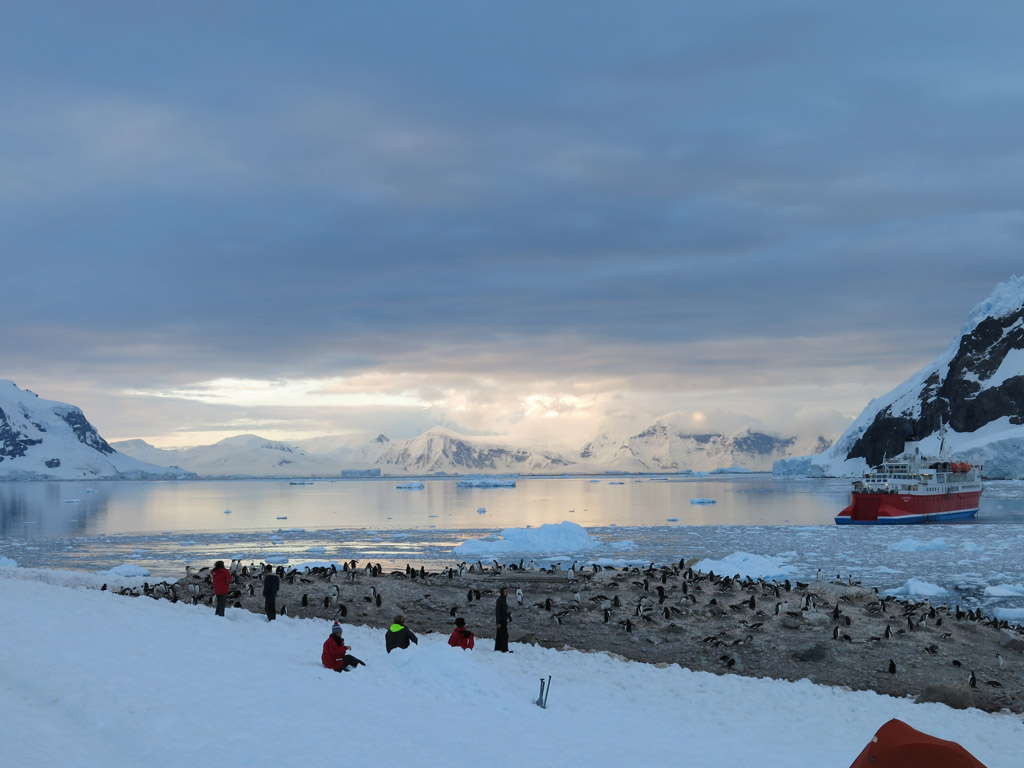 looking out over camp 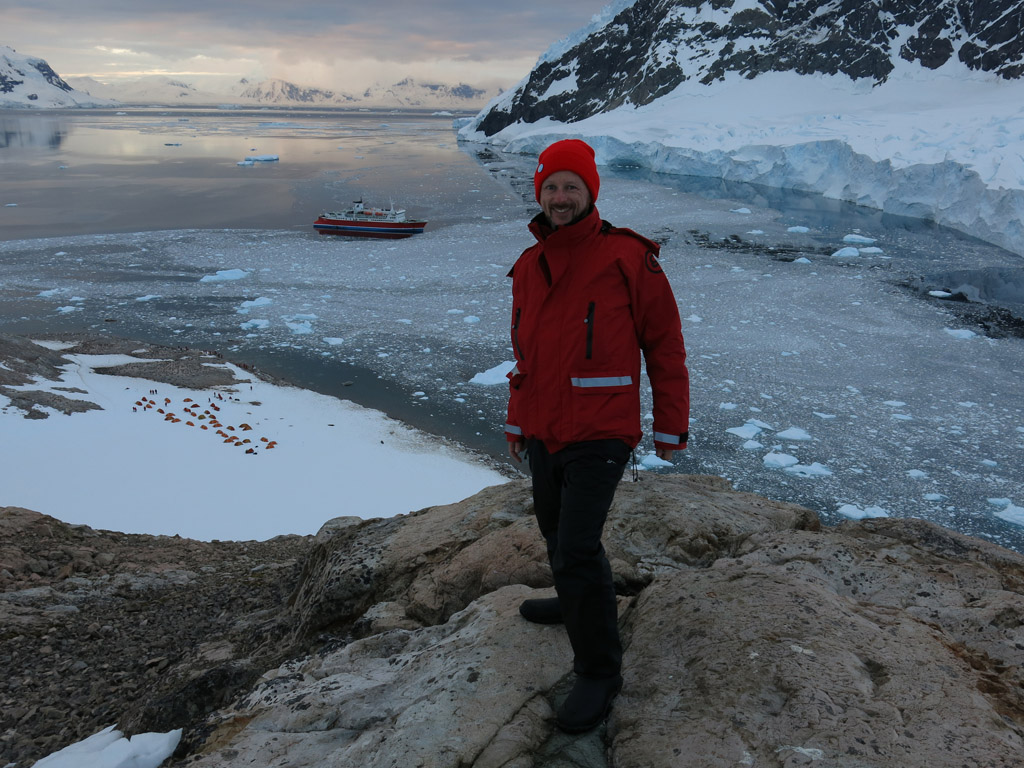 top of the world

The sunset was incredible. The colours, the ice, the harbour, the boat, the penguins. It was perfect. The guides were all beside themselves at the weather we were having and were snapping pics themselves. From the top we could see out over everything and it was simply breathtaking. 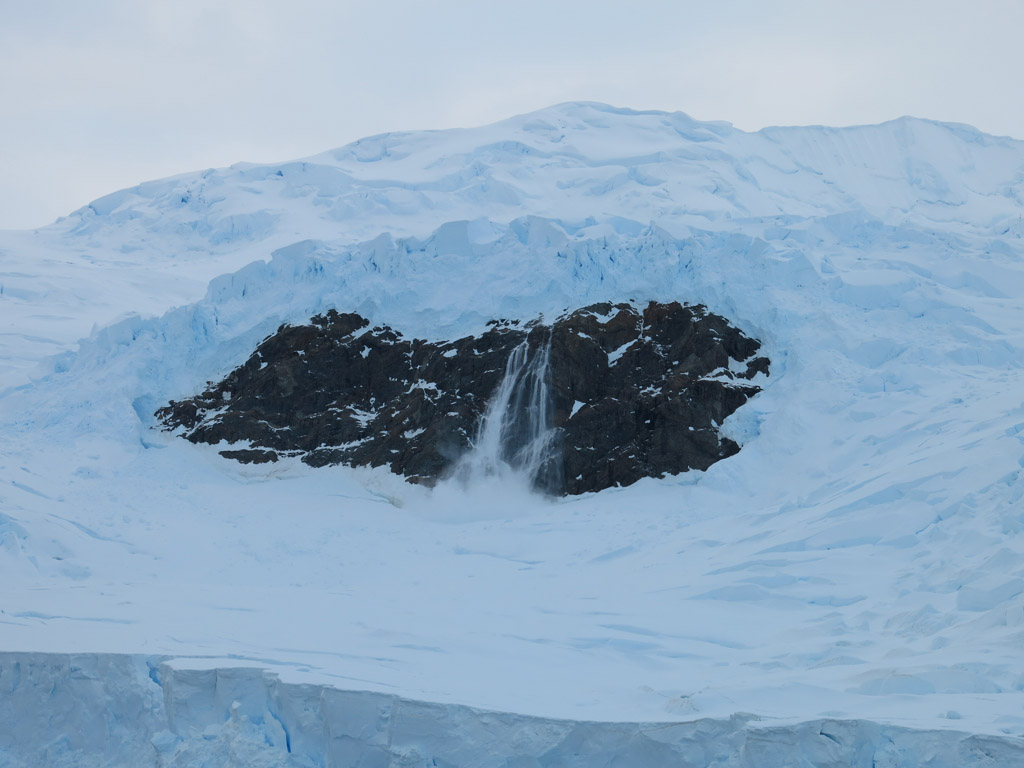 While up there, we got to witness some ice falls from the sides of the mountains and glaciers. The fierce cracks would herald the huge ice falls. One was so large it caused some significant waves on the shore and caused the nearby ship to rock considerably. Ah… so that was the reason we were up the shore a bit!

Rather than walk back down the ridge, I opted for the easy way… sliding down. There were a few worn sliding paths, and a number of us opted to head down them. What I didn’t really quite realise was just how steep it was. Once I got some momentum, I flew down! It was quite the drop, but aside from a little catching of the snow with my feet, I got down unscathed and pretty dry. Win! It was quite the rush. 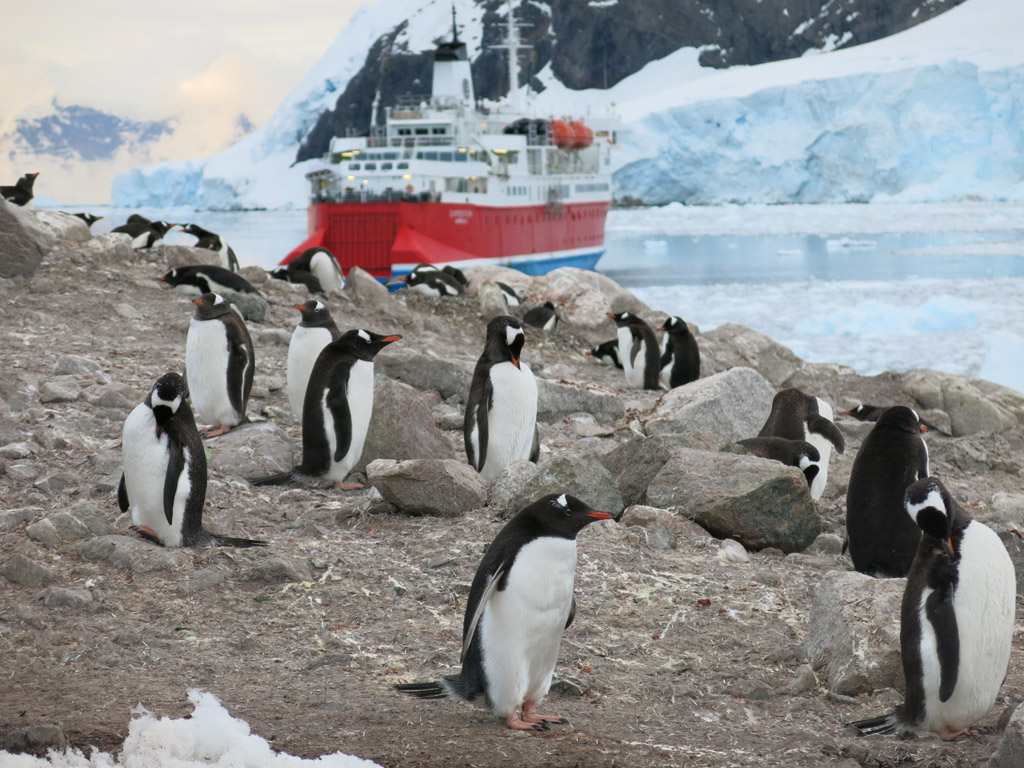 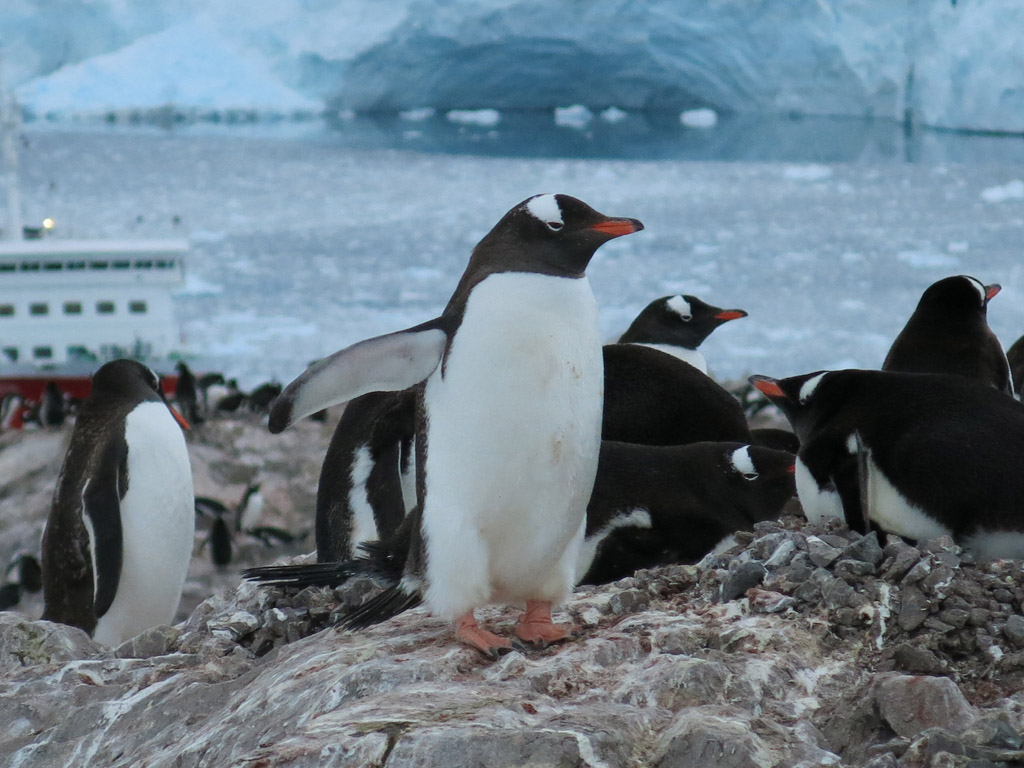 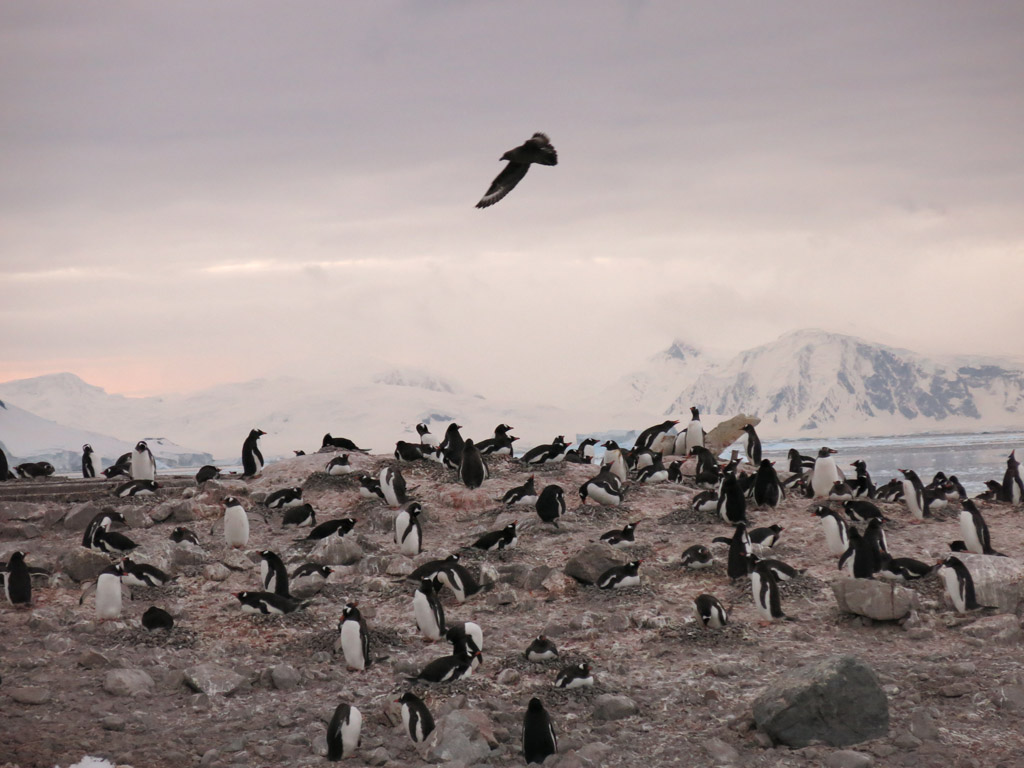 I slid in just in time to join the Christmas carolers. Kate had been snapping away at the penguins, so we went and joined them to see in the Antarctic Christas Day. You would not have known it was midnight, as the sun just dipped a little. Sunrise would be in two hours, so it was never really going to get dark. 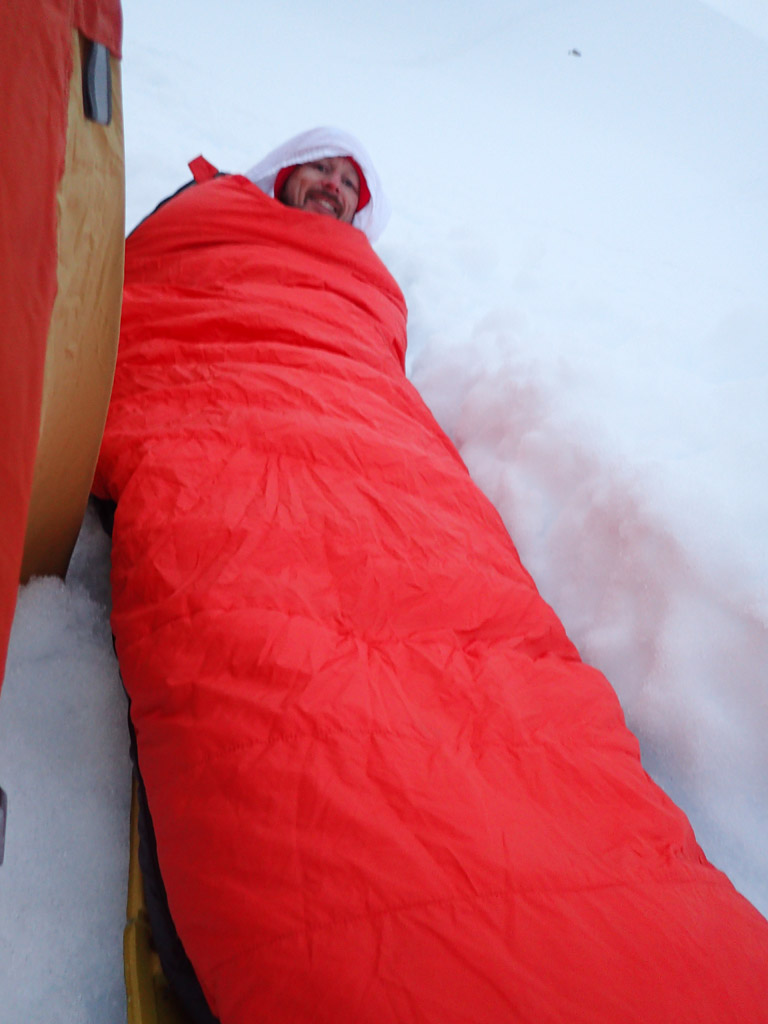 getting ready for a good nights sleep

As our curfew hit, and the weather was still good, a few of us opted to sleep out in the elements… just a mat to protect from the ice, and a sleeping bag. Kate prefered the comfort of the tent, but me, I had to be out in it.

It must have served me well, as I was one of the very few who dozed off and woke up hours later. Wake up call was 5:30am and I was dead to the world when Kate shook my foot. “Get up! Everyone else has packed up their tents!”. As it turned out, it was starting to snow quite a bit. I was totally oblivious there in my sleeping bag. What an amazing nights sleep to cap an unbelievable day.