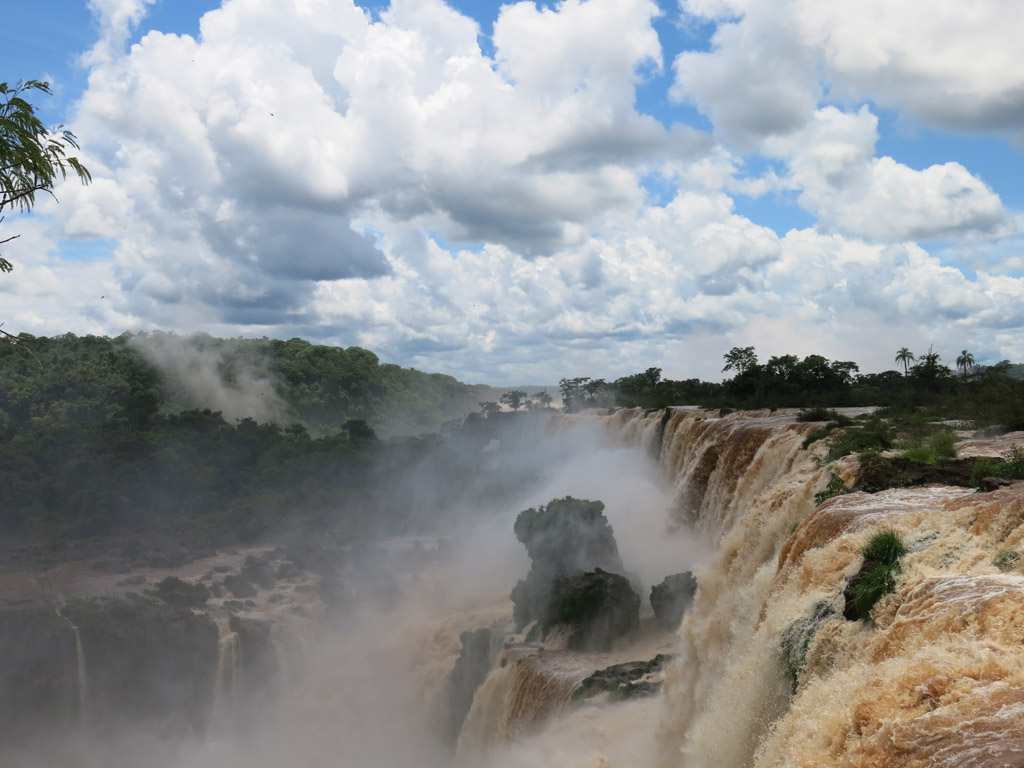 the power of iguazu

Today was our first full day at Iguazu. You could not have more of a contrast from our previous journeys this trip. As we walked out of our hotel, straight into the national park, it was about 30 degrees and what felt like 1000% humidity. Suddenly I missed the cold.

Within the national park, around the falls, there are a number of walks you can do to explore them. As I mentioned, Iguazu is on the border of a few countries, and each apparently offers their own unique perspectives. From Brazil (which sadly we would not have time to get to), you see the entire waterfalls, however from in Argentina, you get to be in amongst them all. While the idea of seeing them from Brazil was appealing, given the amount of mist and spray, we were not sure what you would really see, so were happy to be here in Argentina. 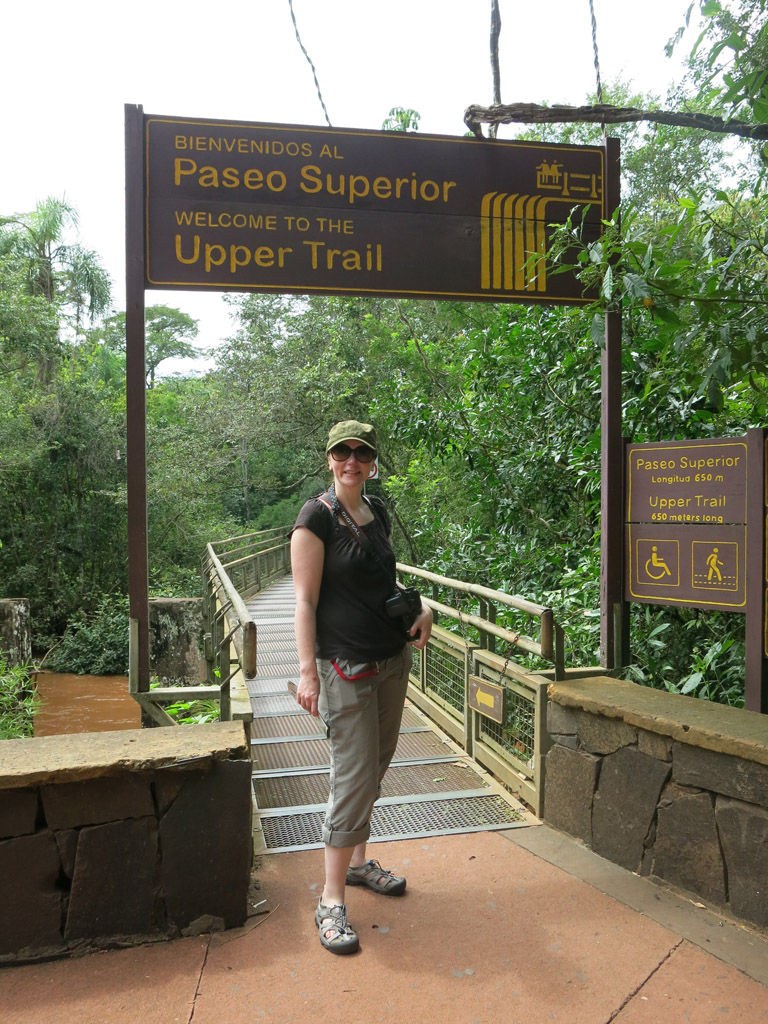 We started with the Paseo Superior walk, which took us along the top of a number of the falls. It was a bit crowded along the walkways between falls, but there was always time to try and get photos as we moved along. But you know, photos never do justice to raging torrents of water do they? 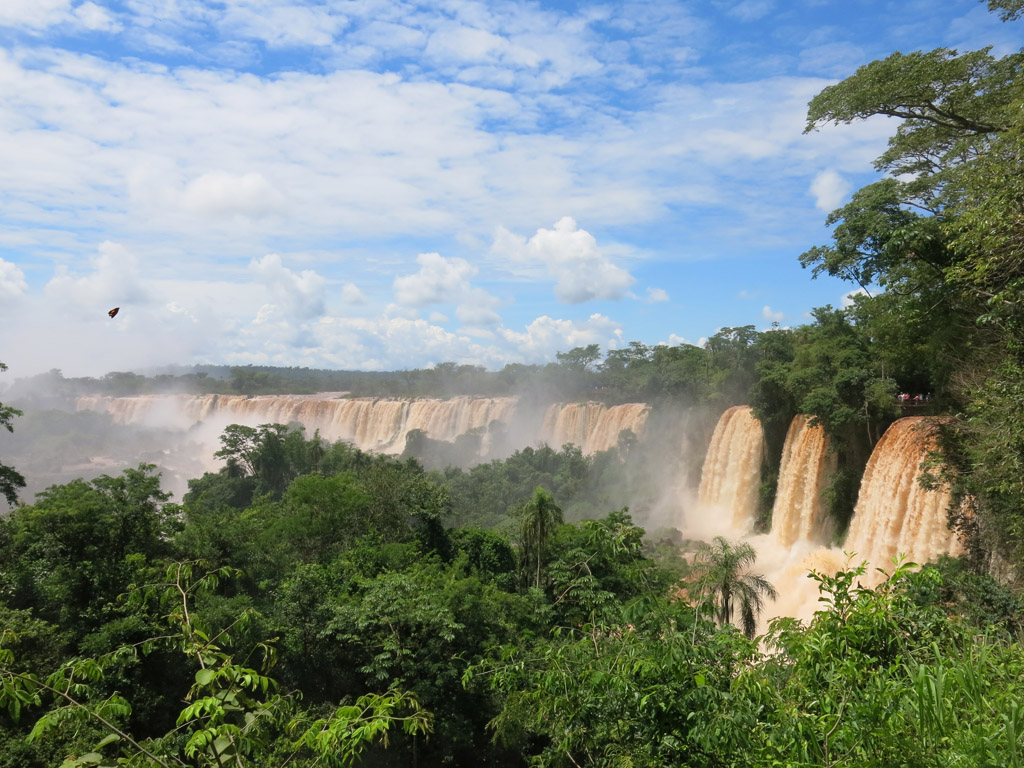 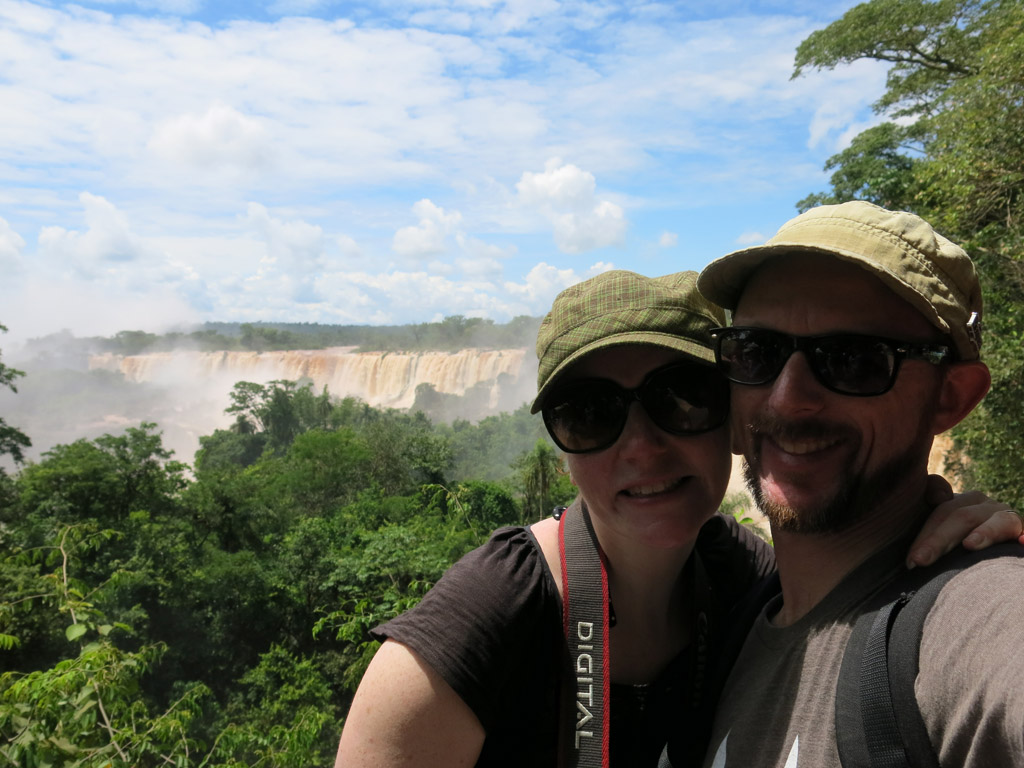 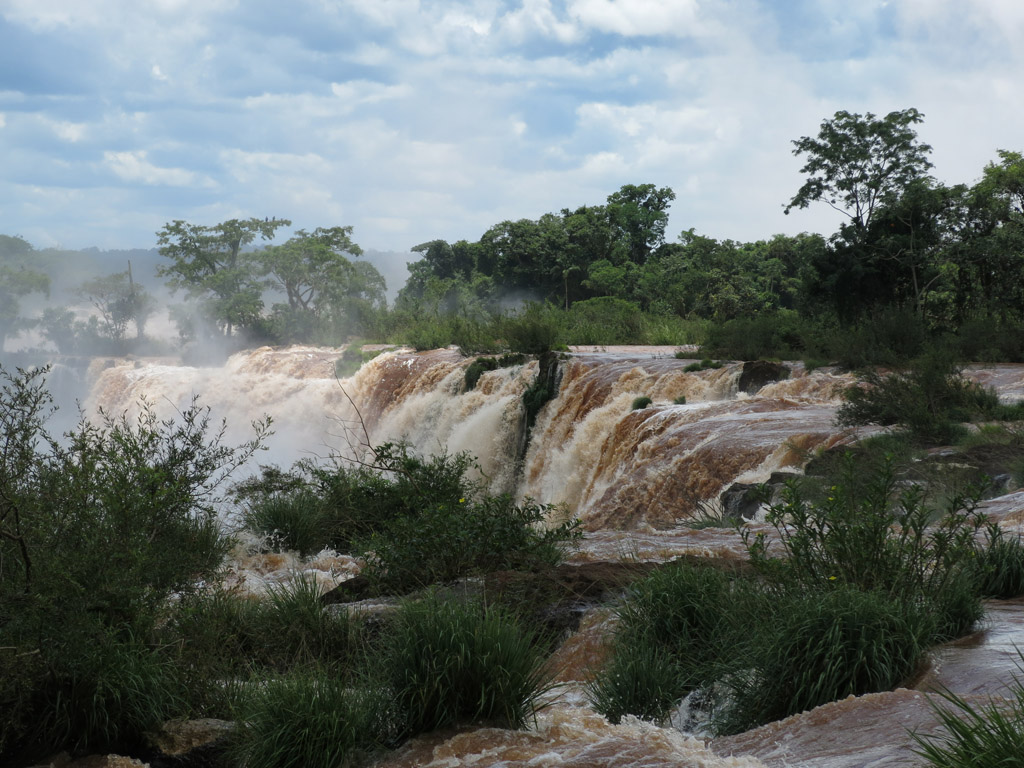 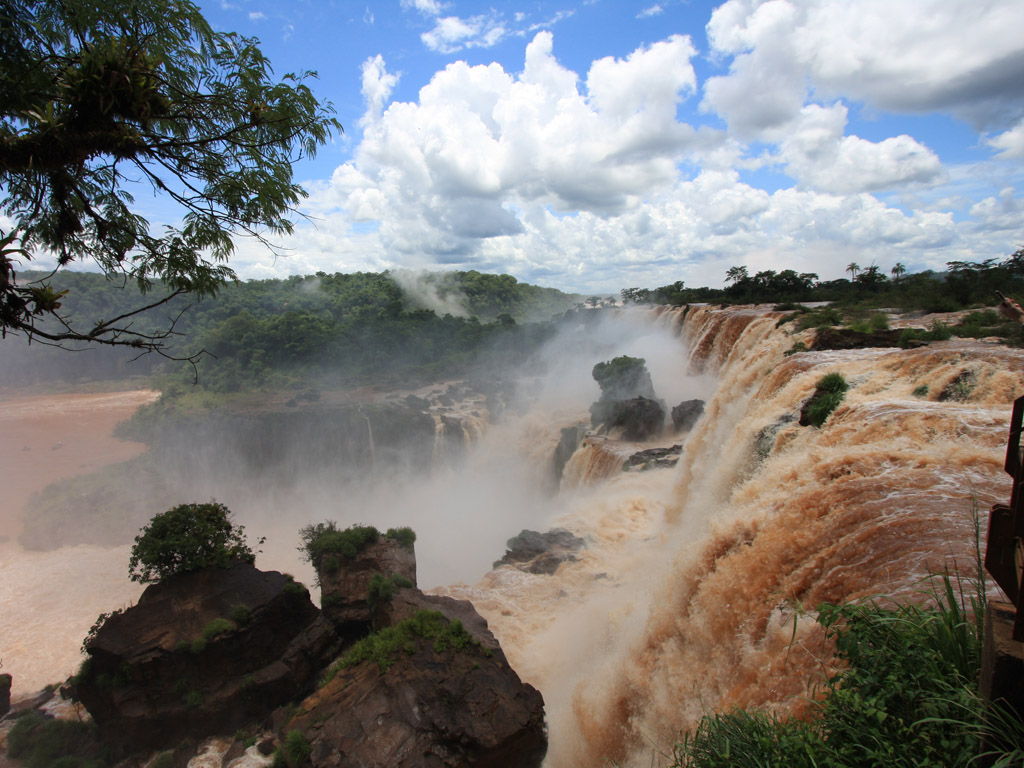 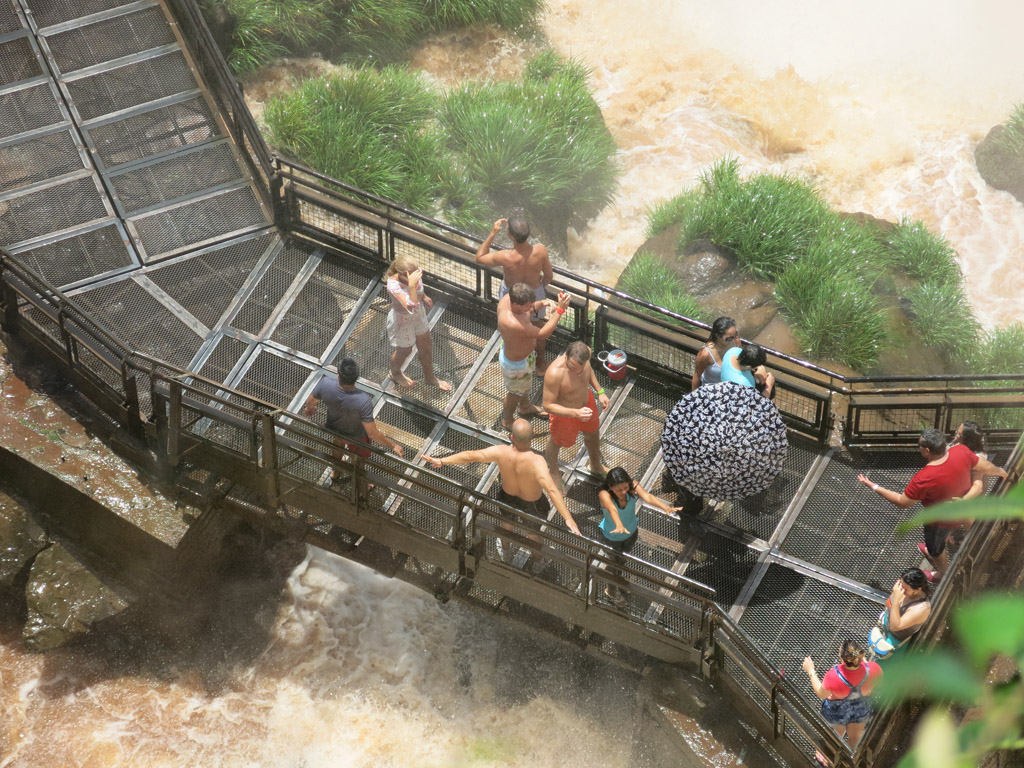 Every now and then we would catch the spray from the nearby falls, which was glorious on a hot and steamy day like this one. 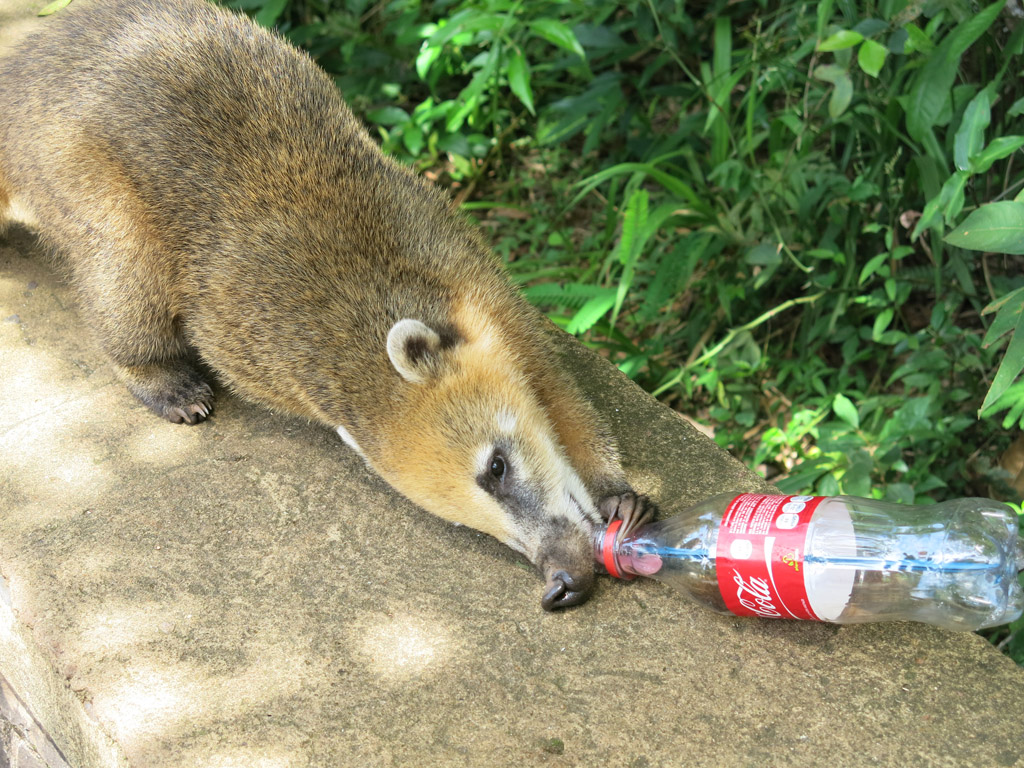 While we were out and about we came across more of the furry little critters. This one did the craziest thing. Someone had set an empty coke bottle on the seat next to them. The little guy jumped up, unscrewed the lid using his mouth and claws, and started licking it clean. They certainly have learned a few tricks!

It took a couple of hours to wander that path and we were super sweaty by the time we got back to the central area. The limon icy pole tasted so good! 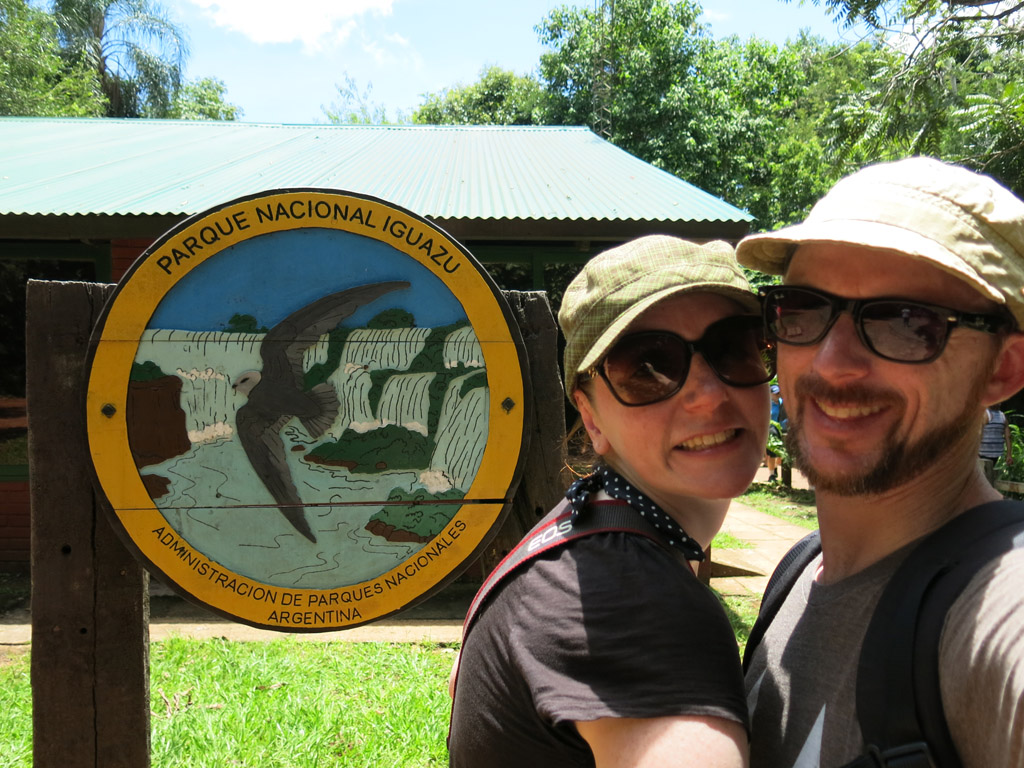 Next plan was to head to the top most falls, Garganta del Diablo, or Devil’s Throat. Now usually you can take the train up or enjoy an half hour walk. We were keen for the walk but for some reason it appeared the path was closed. Ordinarily you would think no probs, but this meant that EVERYBODY was waiting for the train. Oh boy. 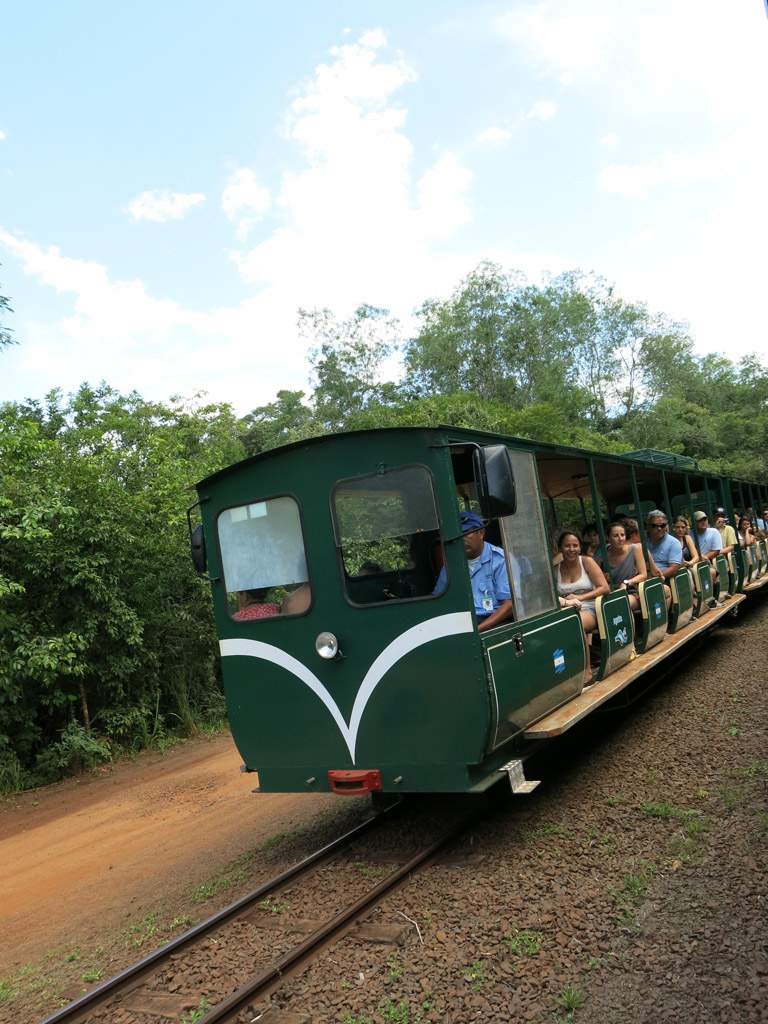 It took over an hour of waiting in the heat to get on a train. It seems the line/queue system kinda breaks down here in Argentina and things become a bit more free-for-all. Hhhmmm. 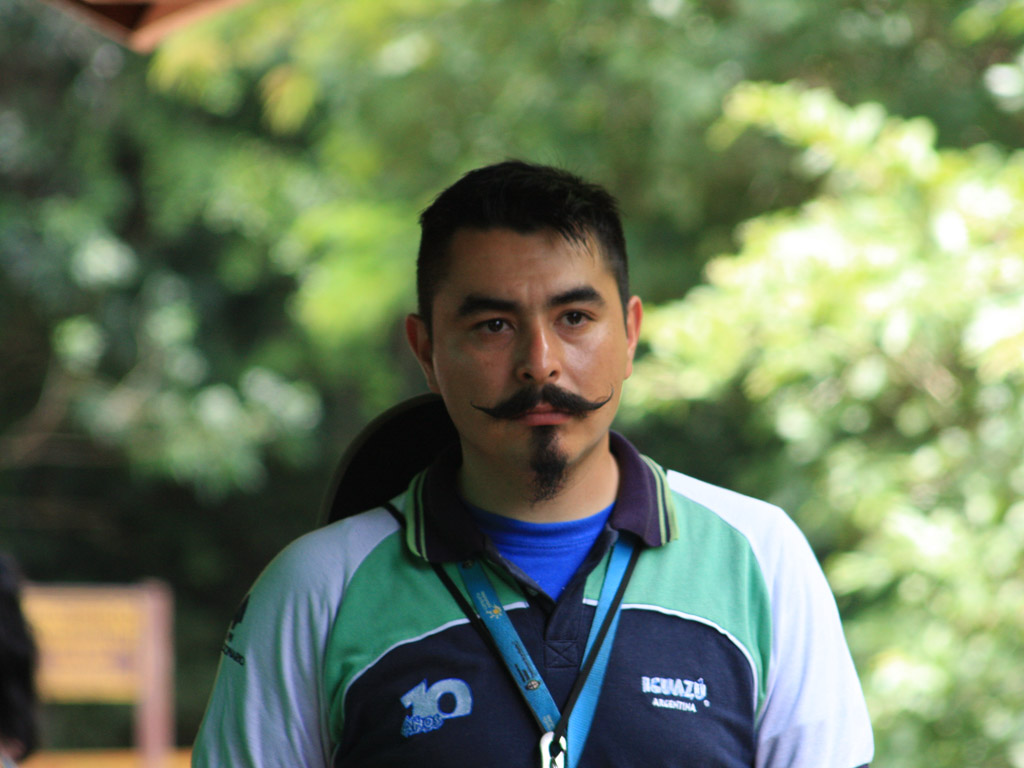 Although, we did see the coolest facial hair so far. This guy was rocking it in a pretty unironic way… much different to back home. 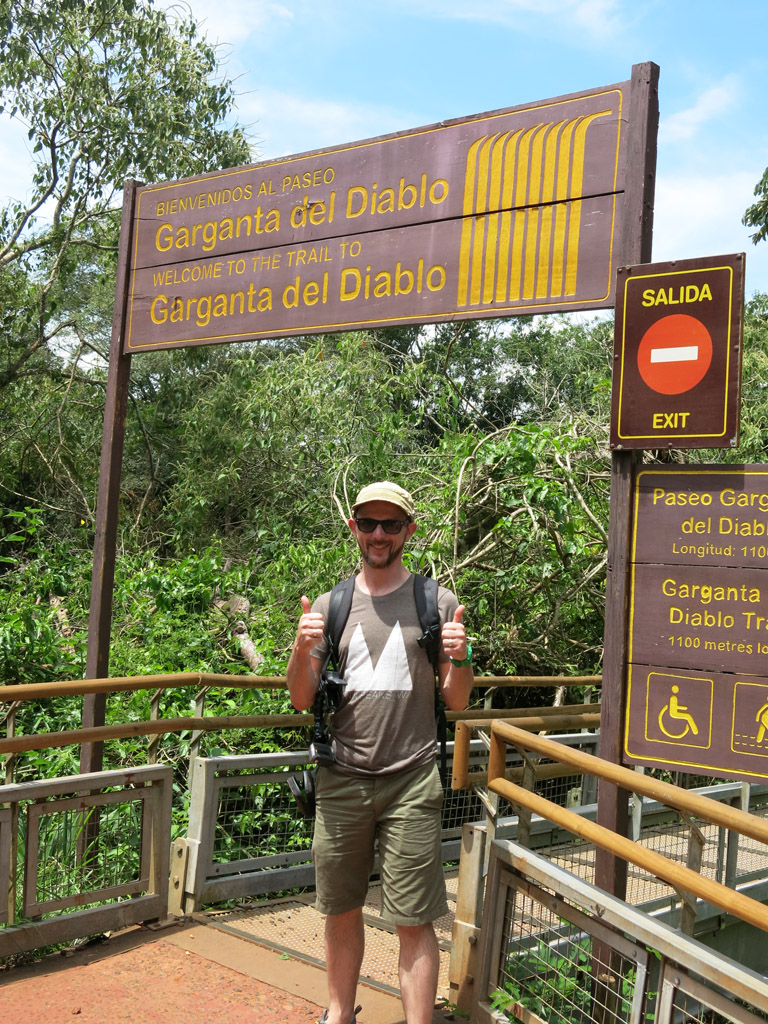 But we got on and made our way to the top and made our way across a kilometre of walkway over the fast flowing river. We eventually got to the Devil’s Throat and om my! It was a fury of water and noise and spray. There were numerous falls all descending down. It was pretty awe inspiring. 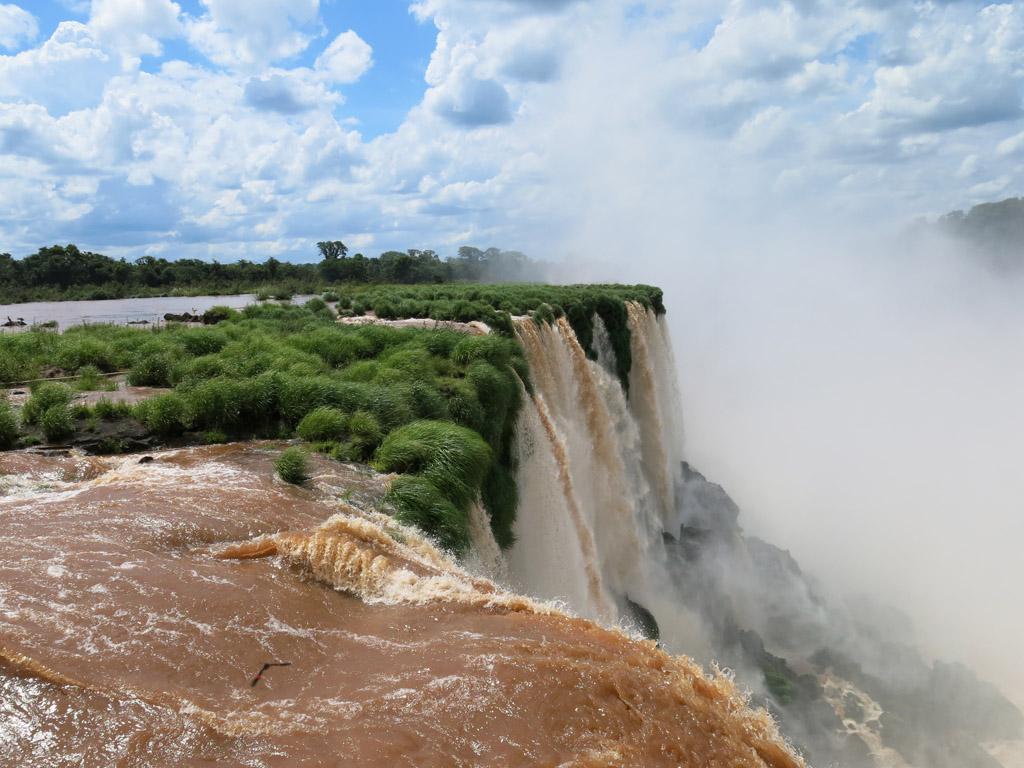 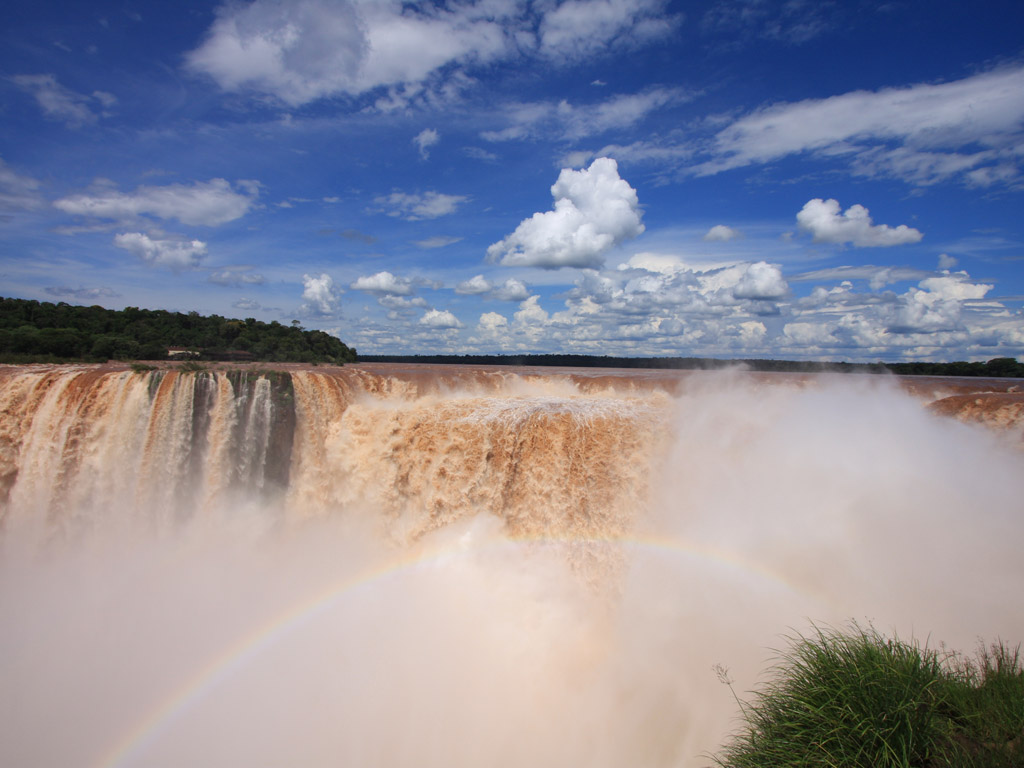 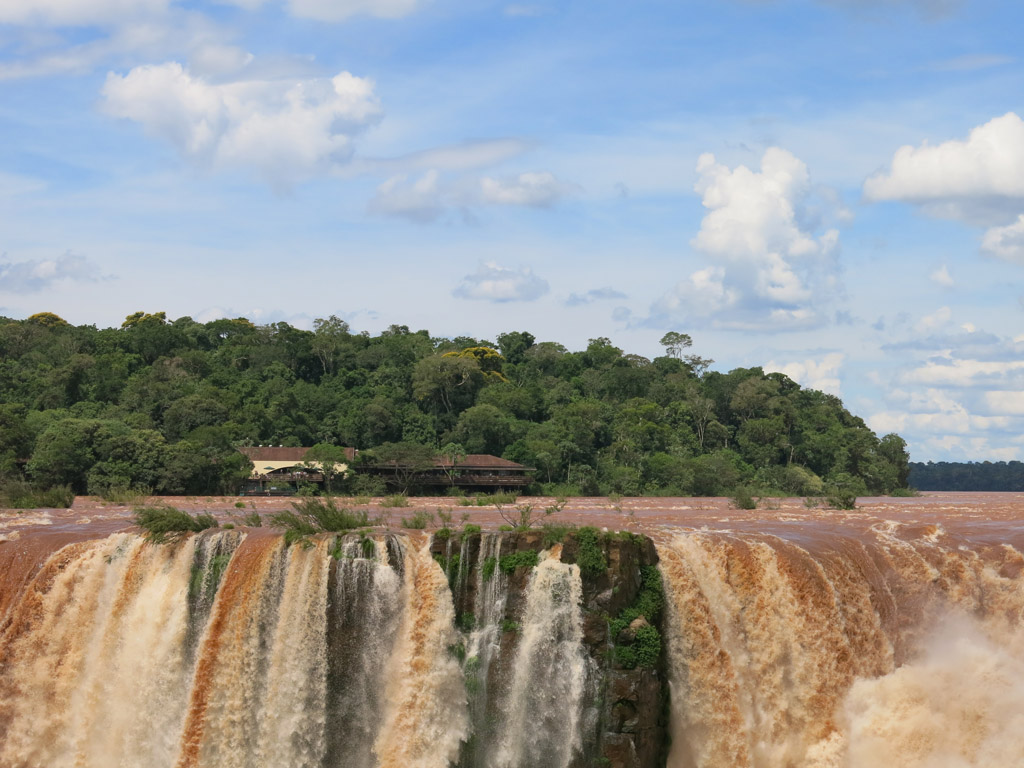 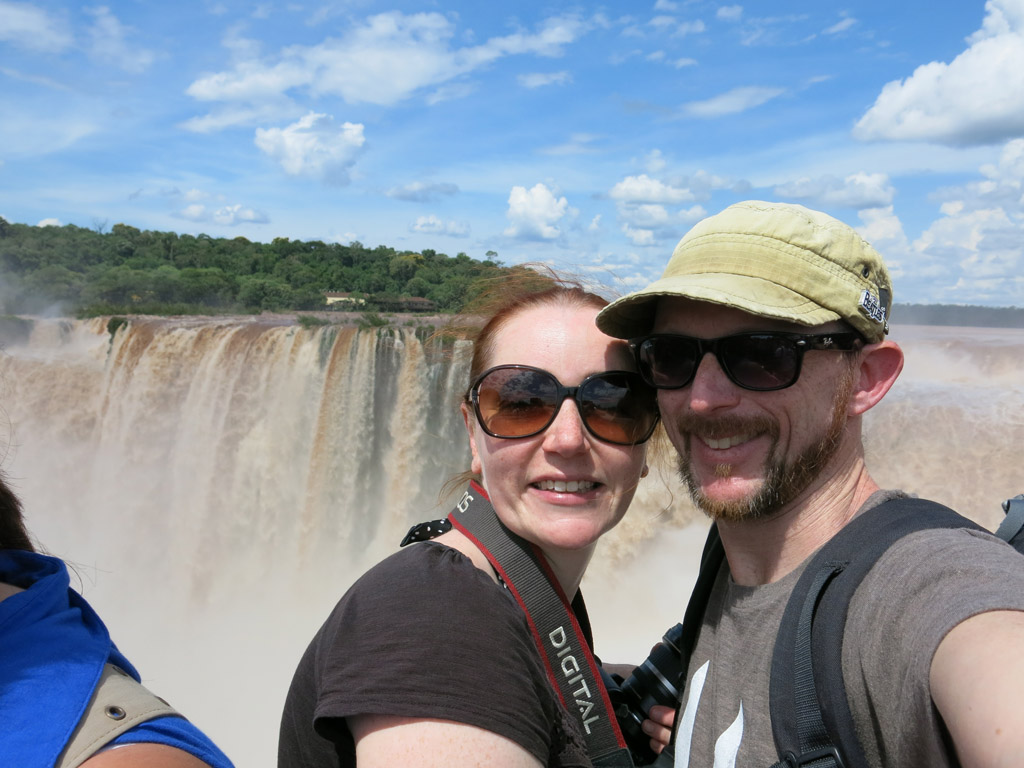 Sadly any kind of line system was also breaking down here and it was every man for themselves in trying to get a good vantage spot. Seemed all the park guides could do was blow their whistle without effect, trying to get people to move along.

But it didn’t diminish things too much as the sheer force of nature just swept you up. 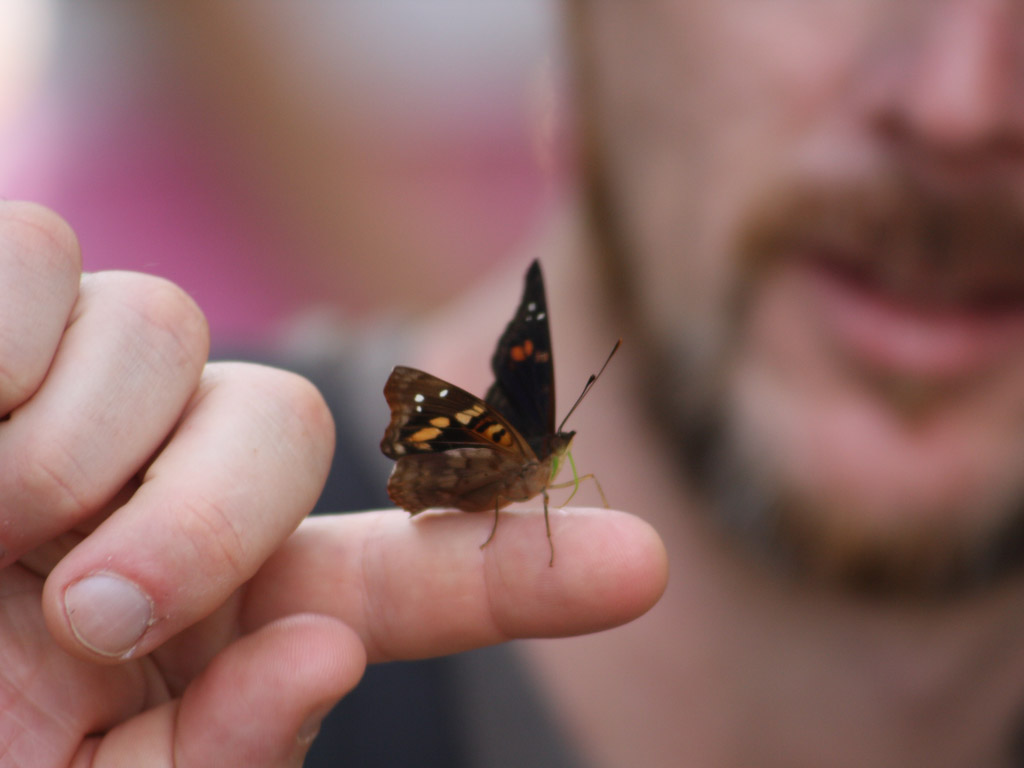 We were super hot and sweaty by this point and made our way back to catch the train back to the main part of the park. One the way back I met this lovely butterfly who wanted to hang out and be photographed. Check out the freaky green “fangs”.

It was getting close to 5pm, so things would be winding up in the park and would be shutting up soon. Seemed like a good time to have a swim. Ah, now that is an advantage of staying the park.

Now cooled down we had an early dinner, kicking back and watching the falls as we had a beer and contemplated how awesome things were for us.