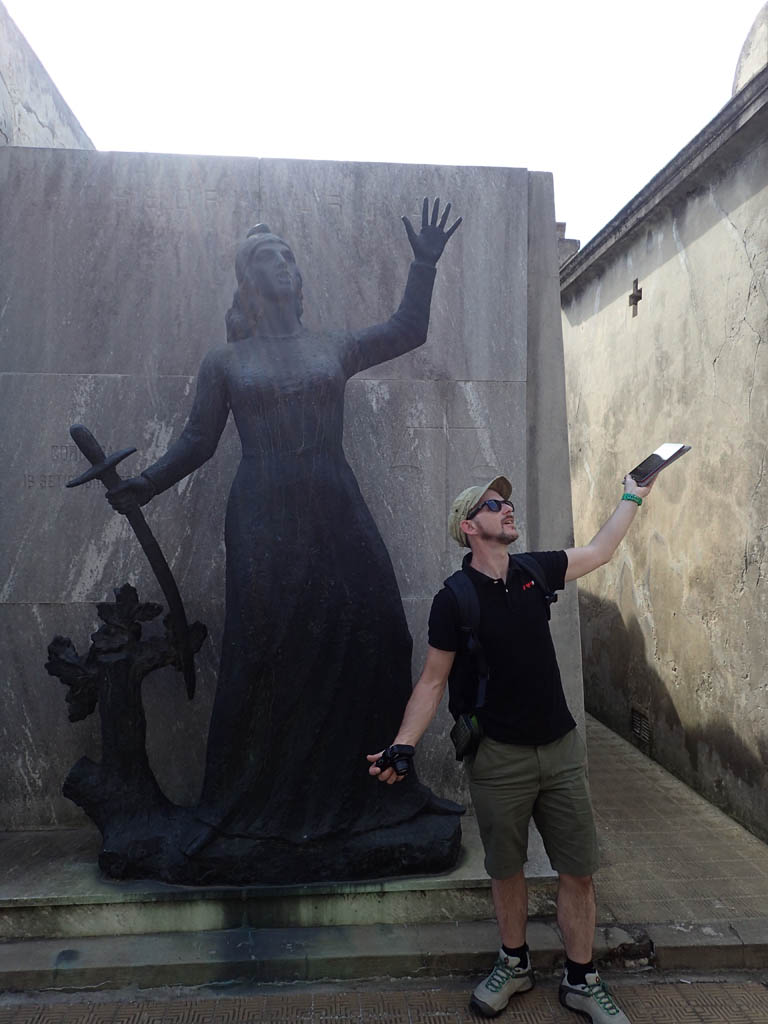 hanging out in the local cemetery

Hope this finds you all doing well and winding down for the Christmas break. Just the right time for you to settle in to reading about our new adventures!

So after a hectic, whirlwind of a weekend, Kate and I had no time to rest. Rather it was packing for our early flight on Wednesday. First stop was Sydney (yawn) but then after a short wait, it was off to another country. A new continent for me in fact. Destination, Chile! Our fairly new feeling QANTAS plane treated us well, and with 4 movies and little sleep under my belt, we arrived in Santiago about 13 hours later. An uneventful flight of the best kind, although a little more sleep would have been nice.

In fact Kate especially was struggling with little sleep as we had a 4 hour wait for out connecting flight to our actual destination… Buenos Aires in Argentina. We decided not to spend time in Santiago, opting to head straight to Argentina instead. So with some struggles to keep the eyes open (Kate gave up on that and had a power nap), we boarded our last leg to get to our final destination. If I wasn’t excited already, the captains announcement of “I’m going to keep the seatbelt sign on as we head over out over the Andes” sure got me pumped!

About 2 hours later, we arrived in a new country for the both of us. Too exciting! The immigration folk were friendly, and our bags were waiting for us (always the small worry when you have 3 legs to your journey), as was our G Adventures complimentary airport transfer. Smooth sailing so far! And in another half an hour we finally arrived at our hotel. Our home for the next few nights was the G Adventures picked hotel, Hotel Boca. Some of you might be thinking “Boca? As in Boca Juniors?”. Yep, it is the Boca Juniors themed hotel in the middle of BA. And of course we were staying there! Not too outlandish, just the predominant blue and yellow everywhere.

All in all it was close to 24 hours later (being 7pm Argentina time). I was doing OK, but Kate was in struggle town. So rather than head out on the town straight away, some rest was in order. We both got to sleep quickly, but alas were up chatting at 2am thanks to the jetlag. We finally got some more sleep and at about 9am we were up.

With some brekky under our belts, it was time to hit the town. In reading through the guides for BA, it appeared that there wasn’t THAT much that were “must sees”. A lot speaks of the eating and the partying and the shopping, but little in the way of touristy things. Not a bad thing as it meant we didn’t feel as though we had to rush. 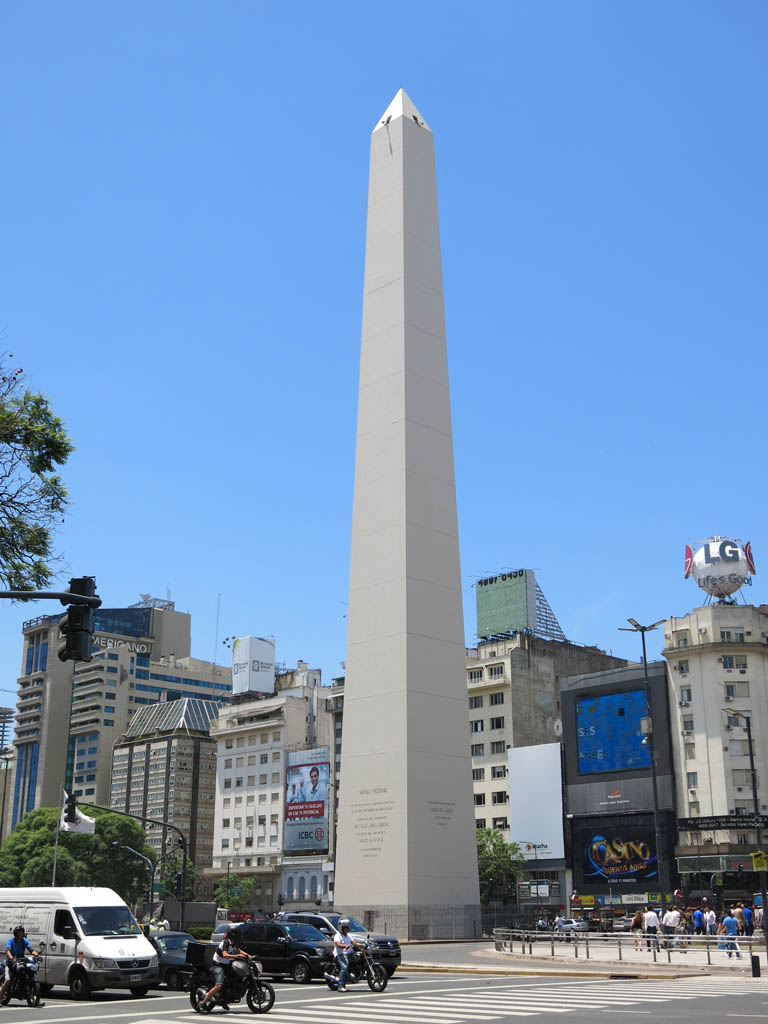 Our first port of call was the Teatro Colon, aka the Buenos Aires Opera House. On the way we saw this giant obelisk just standing there in the middle of the traffic. Clearly not a big tourist attraction, as there was really no way to visit it in the middle of the intersection, but I guess if it is that big all you can do is admire from a distance. 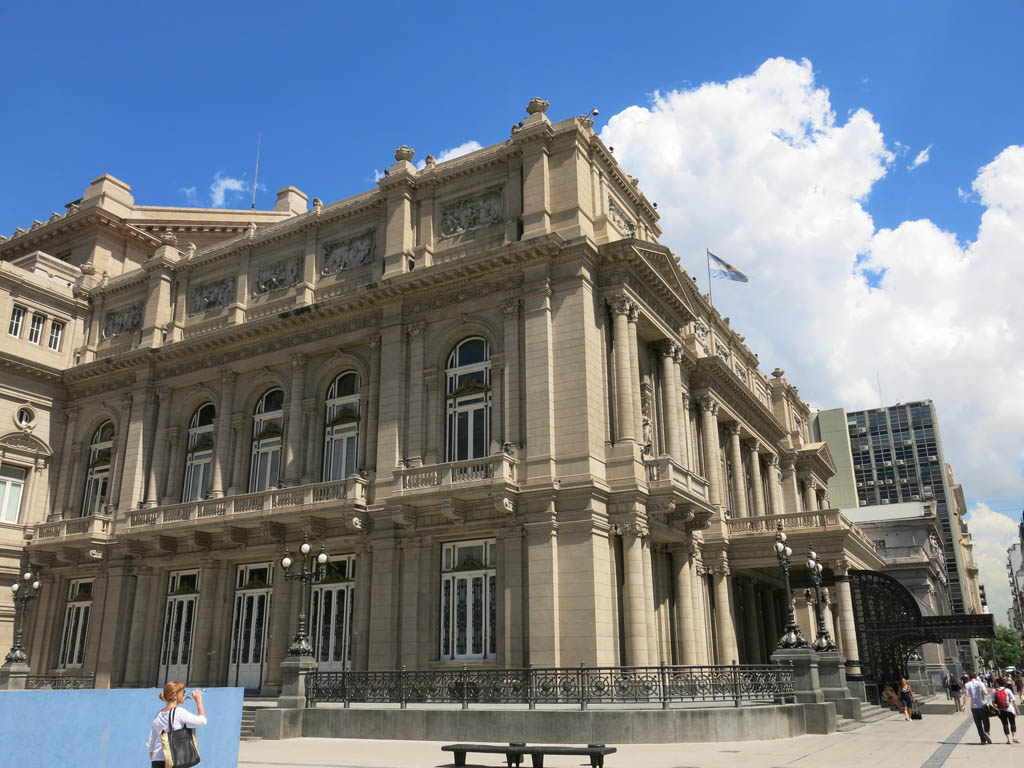 We arrived to the amazing theatre, the size of a city block. Conveniently, there was a tour happening in english in 20 minutes, so we decided rather than admire from the foyer, we would get to explore. So off we went on an hour long tour of the grand theatre. 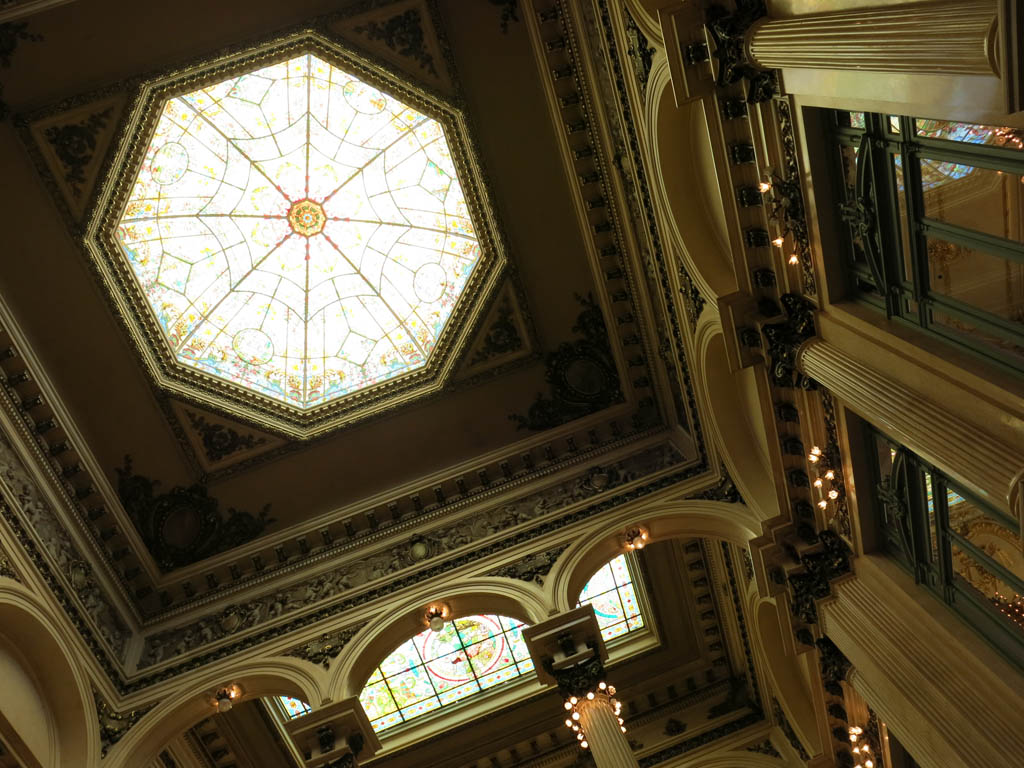 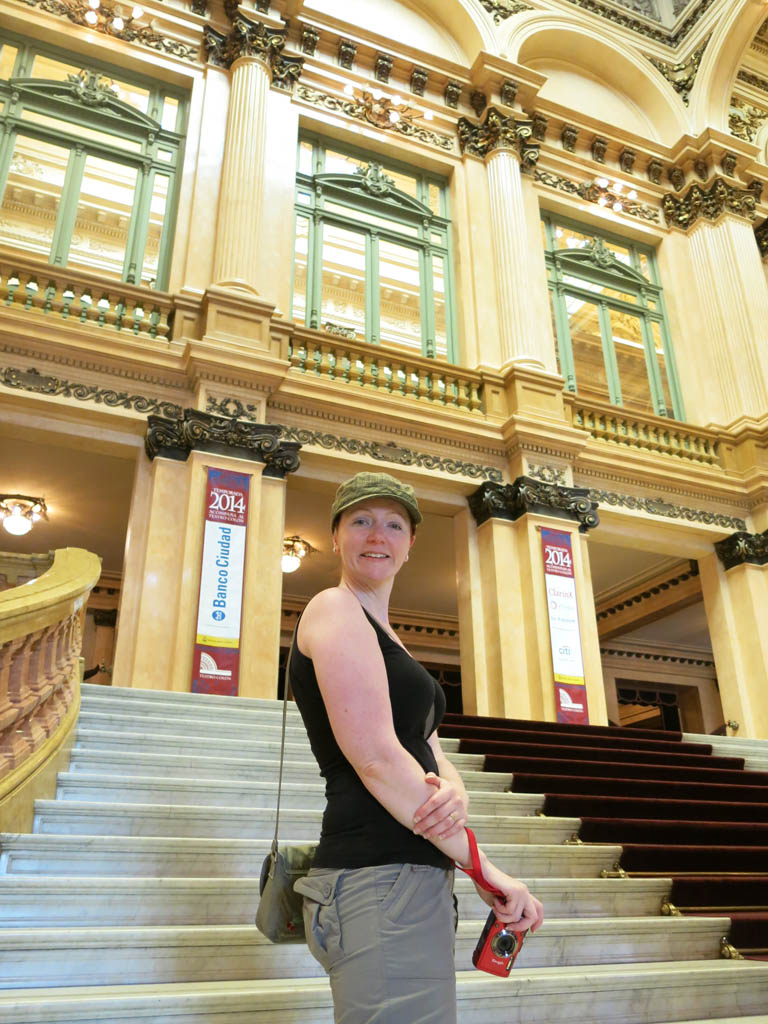 Apparently the largest in the southern hemisphere until the Sydney Opera House took the mantle, it is certainly more picturesque inside. Sure Sydney has the iconic shape and harbour, but this is amazingly opulent inside. Built in the late 1800’s it recently had a restoration to bring it back to its former glorious, and it was wonderous. 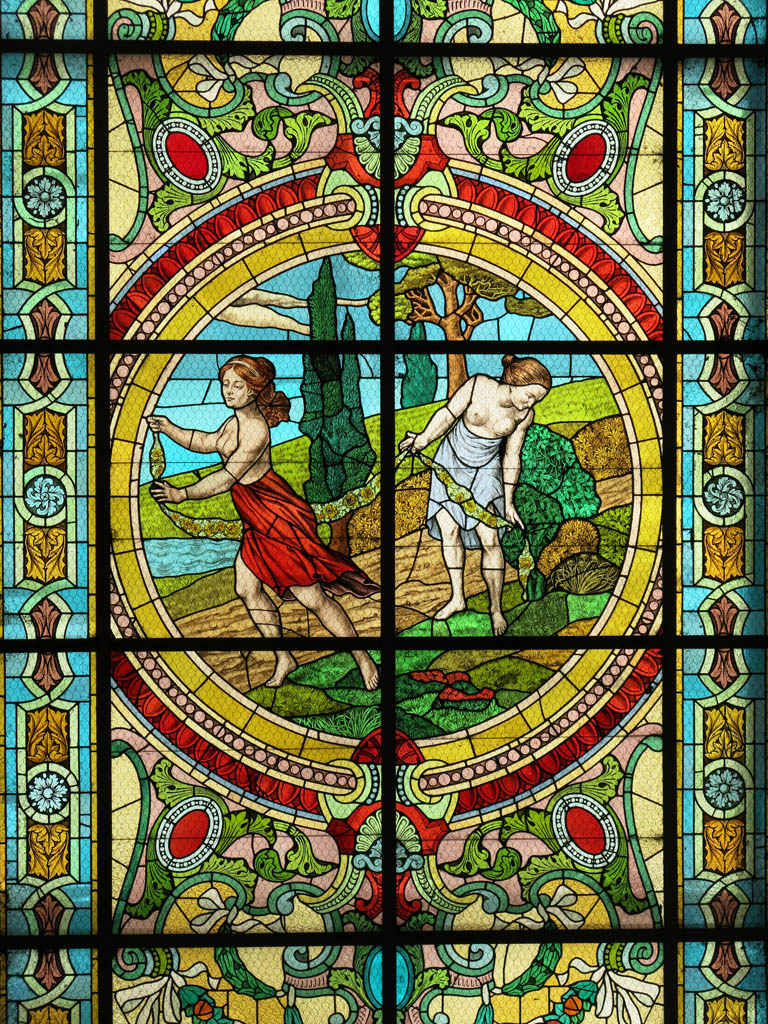 amazing stained glass all about

Our tour took us through the main parts of the theatre, getting the stories behind it all, and also inside the theatre itself. Sadly, we couldn’t take photos in the theatre itself, but this is because fortunately there was choral exams happening so we were treated to some new opera singers showing their talents. To hear just the operatic voice with piano accompaniment in the theatre was quite amazing and a real treat. 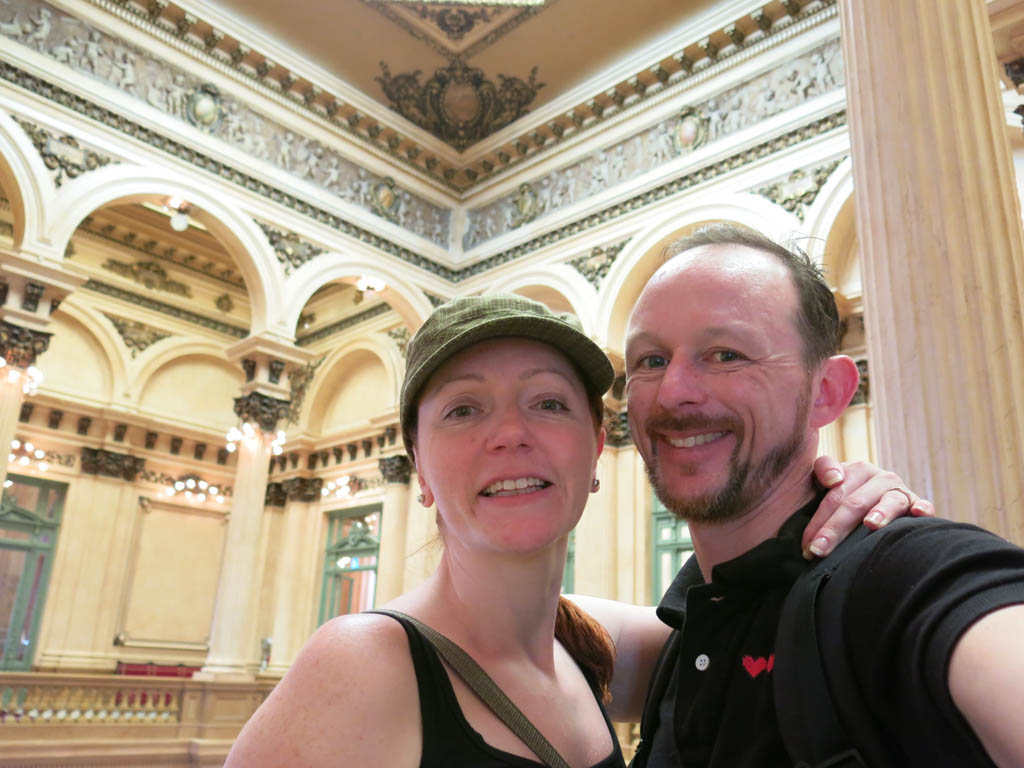 one cultured person, the other not so much

Inside the theatre was spectacular. With about 2000 seats on the ground, and another 700 in boxes all around, it was ornate in the best sense. But importantly the acoustics were incredible.

In the blink of an eye our visit was over, and it was time to head out onto the hot, humid BA street. Before legging it too far, we decided some food and ice cream was in order in a nearby park. Ahhhh. 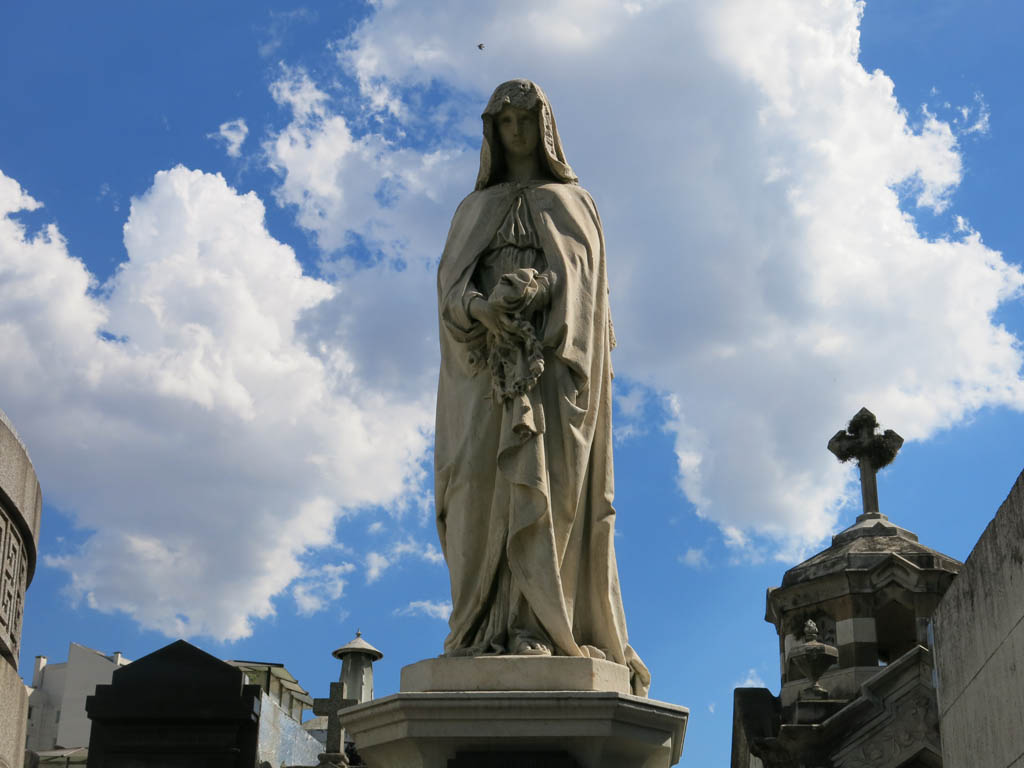 Our next destination was to another of the main tourist spots, Recoleta Cemetery. A cemetery you say?! Yep. This one probably rivals only Pere Lachaise in Paris for being a must visit. While it is the home of most notable Argentinians, it is best known for being the final resting place of Eva Peron (i.e Evita), and it seems she is the main drawcard, with many folks coming to pay their respects to her alone. 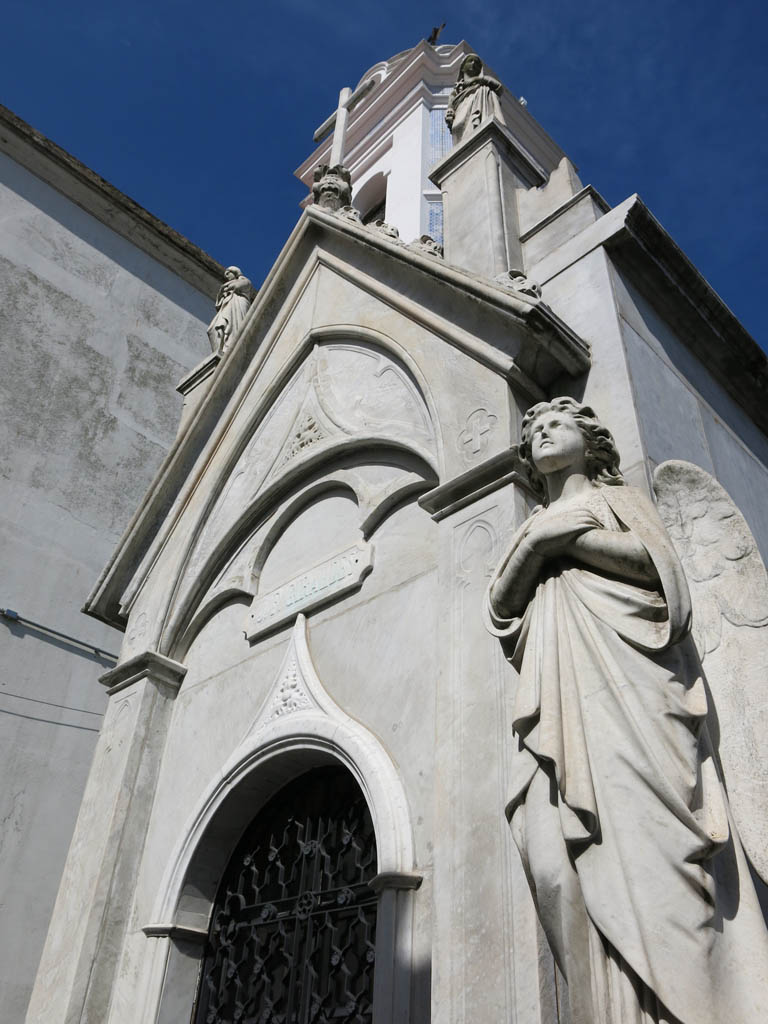 But we decided to spend a couple of hours wandering the grounds, amongst the amazing tombs and statues. I found a really great PDF guide online (via this guy http://www.recoletacemetery.com/) and with iPad in hand we followed the trail. It was great in that it led us to well known Argentinians, like past presidents, scientists, military personnel amongst others, but also to best examples of types of tomb and statue. 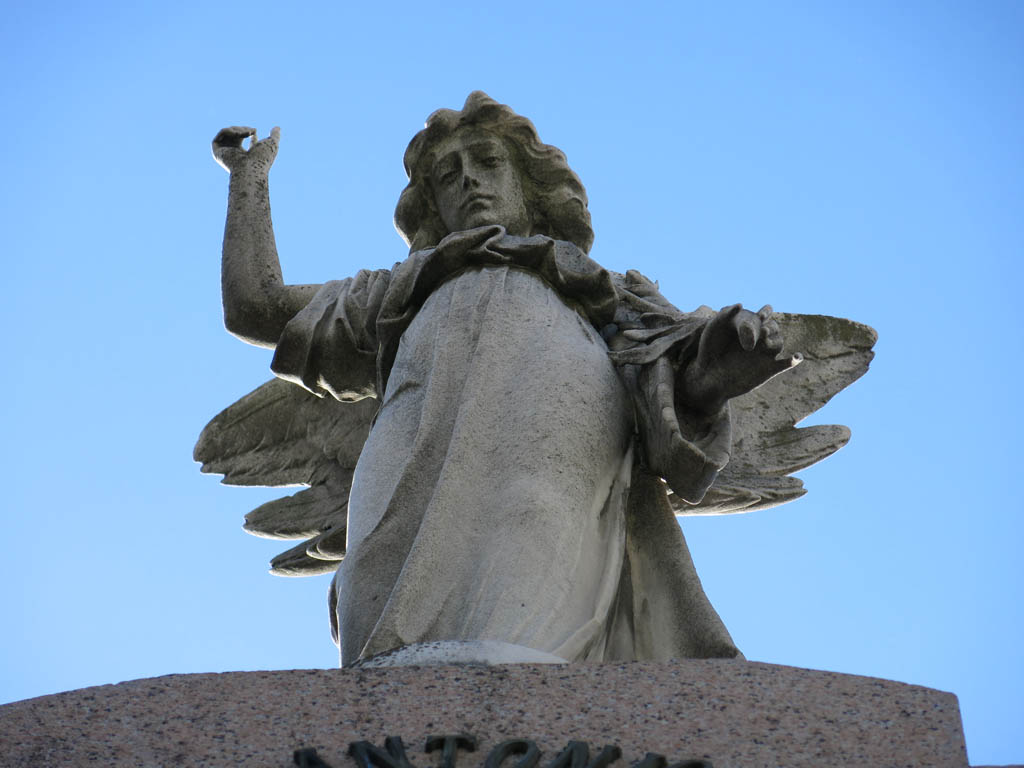 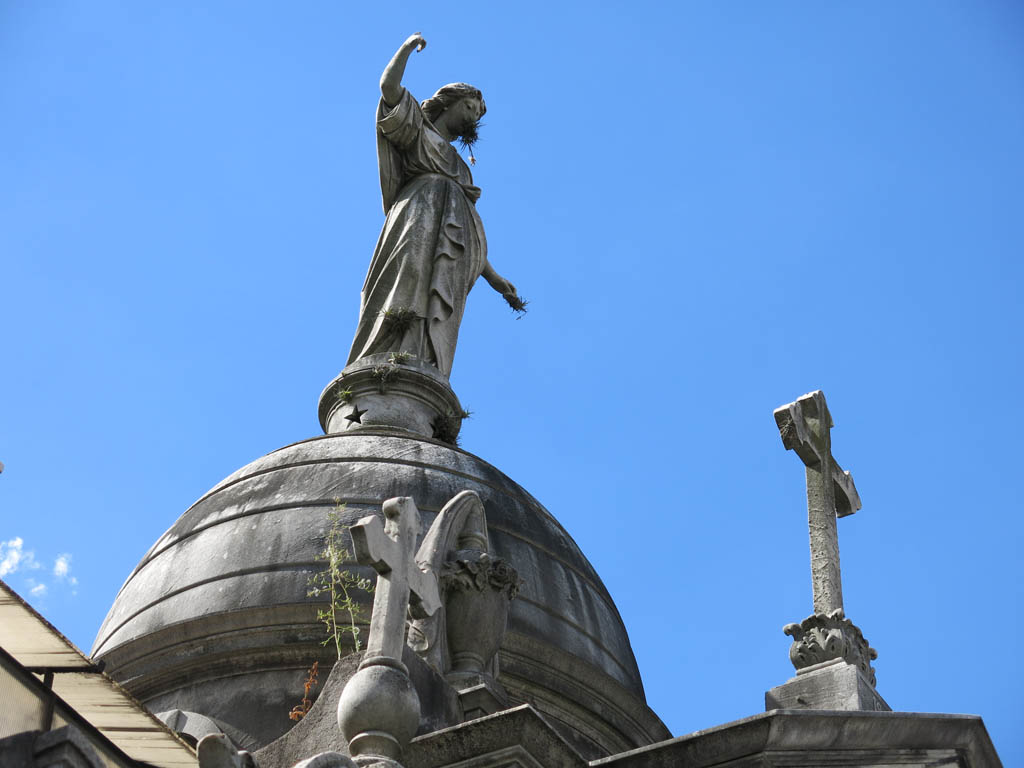 not sure what is going on there

It was hard not to want to snaps pics of everything, as an angle or with the blue sky led to some dramatic images. 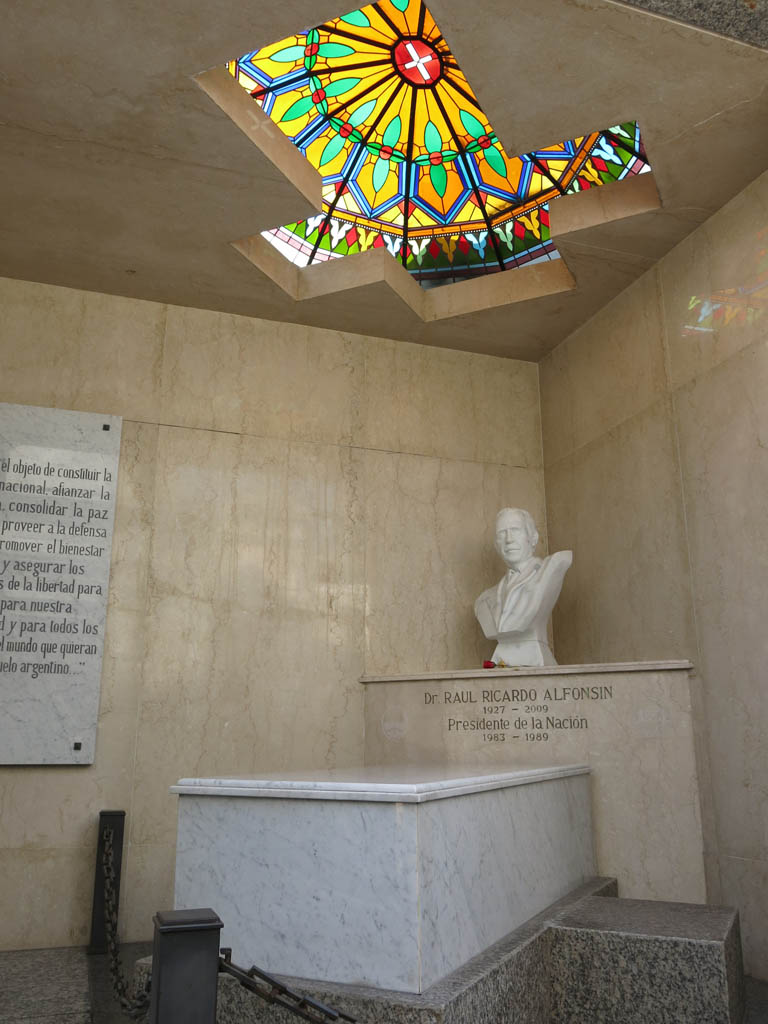 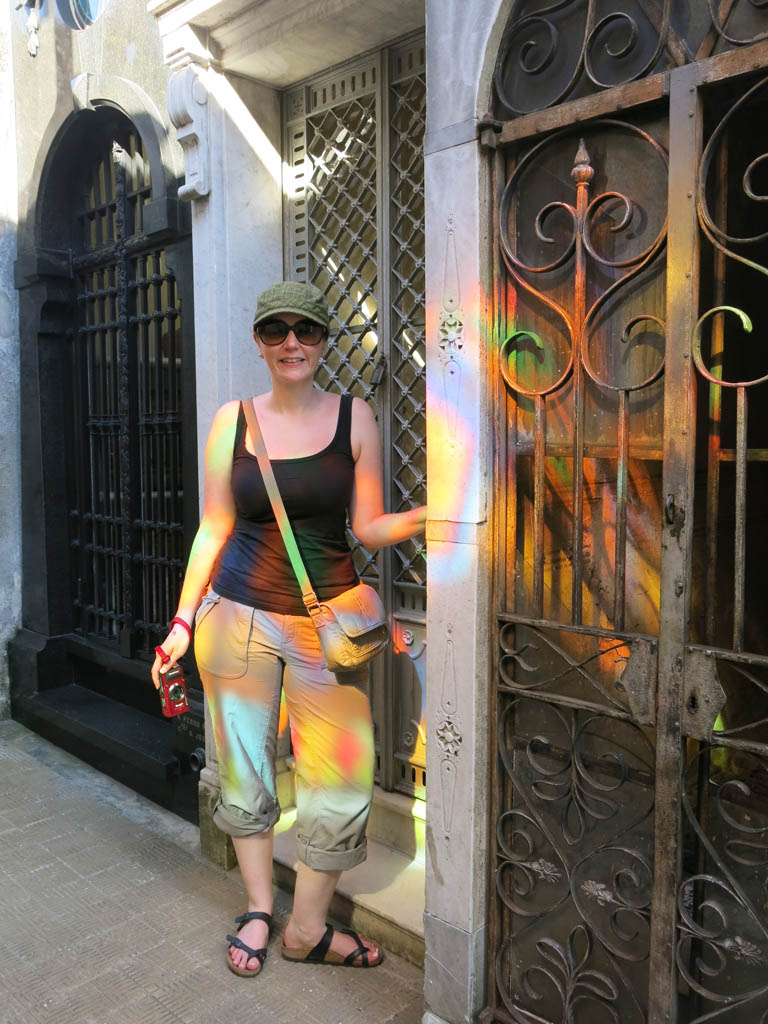 The glorious sunlight was also mean coming across stained glass made for fun, disco photos. 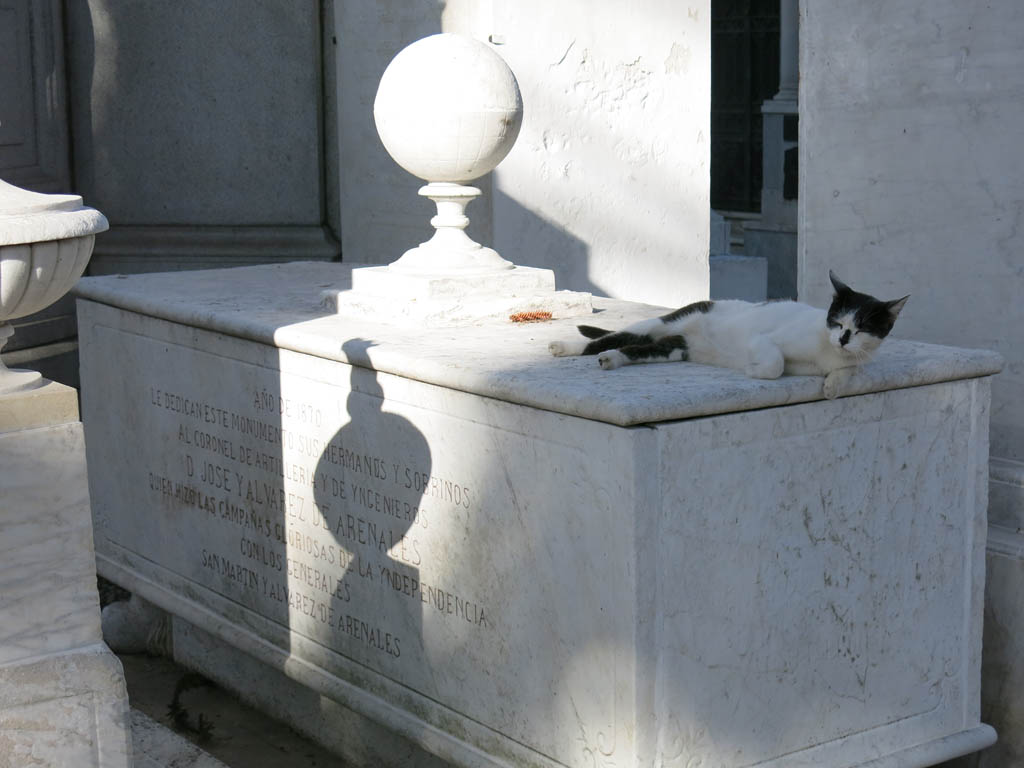 Every now and then we would run into one of the keepers of the cemetery. Of course there were dozens of cats wandering about, looking a little worse for wear sadly. 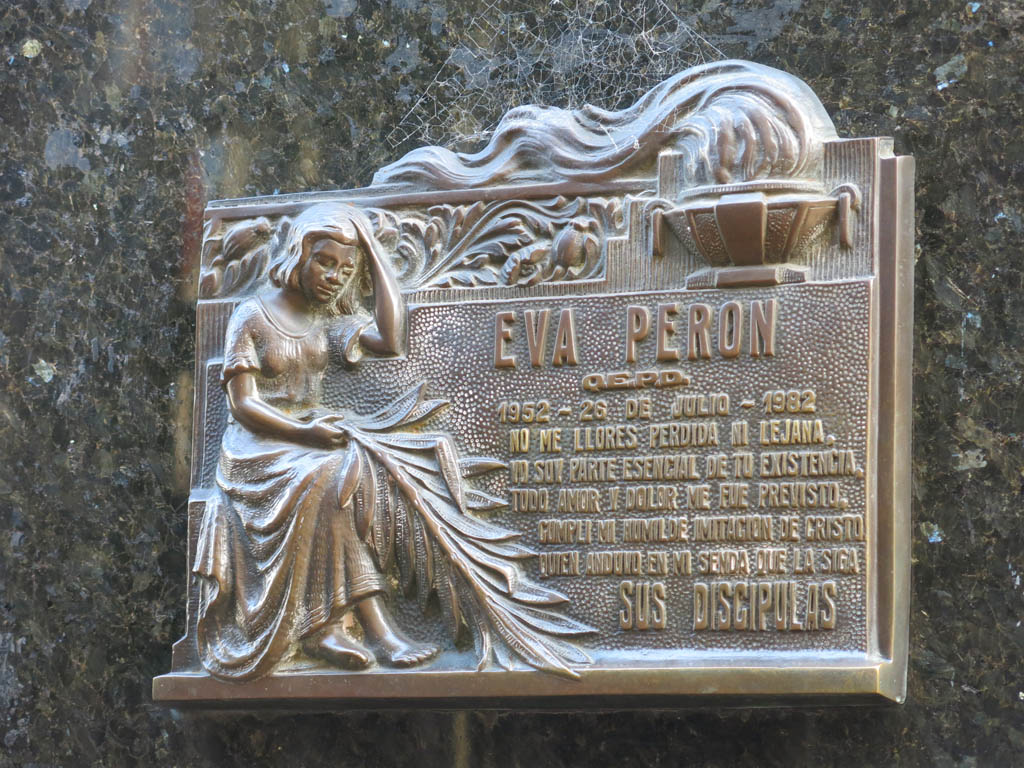 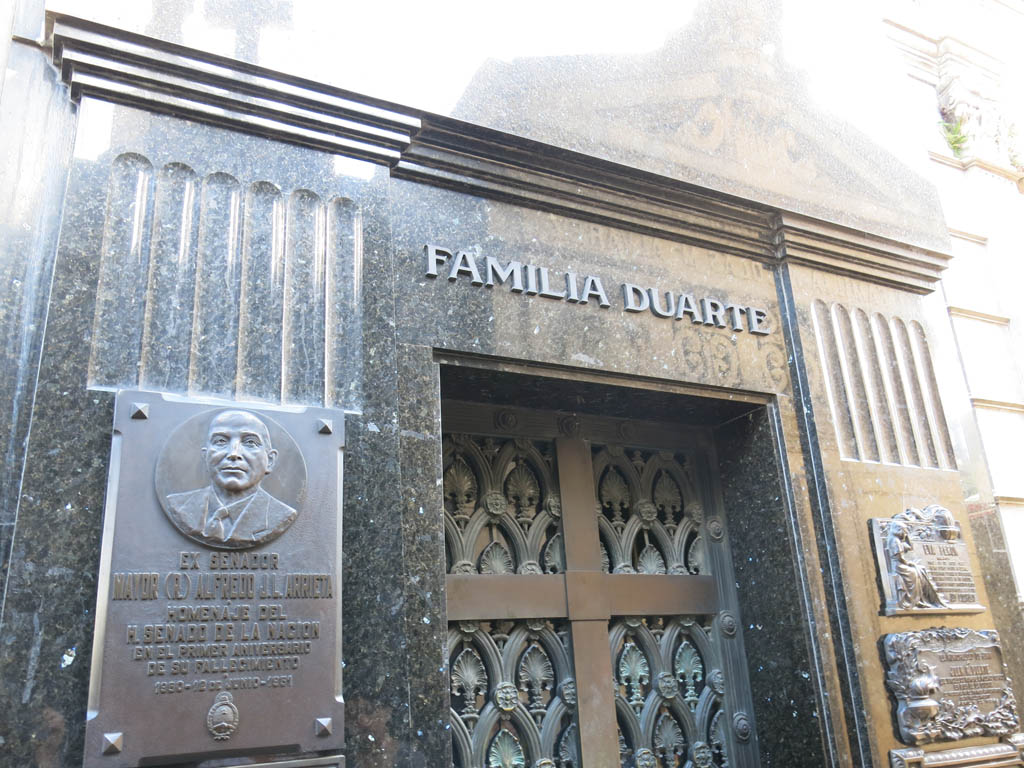 much more nondescript than many of the others

We eventually arrived at the resting place of Eva Peron. If not for a map, we would have missed it. One for the modesty, and two because she was in the crypt of her parents family. But the small crowd around it would probably have given it away. 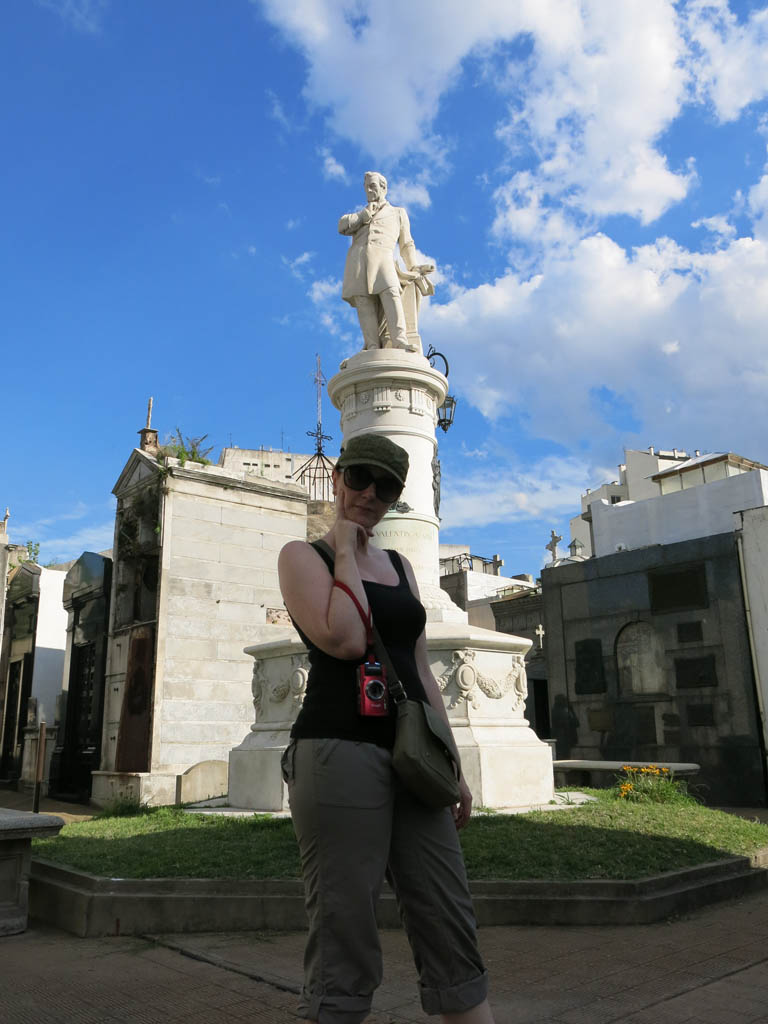 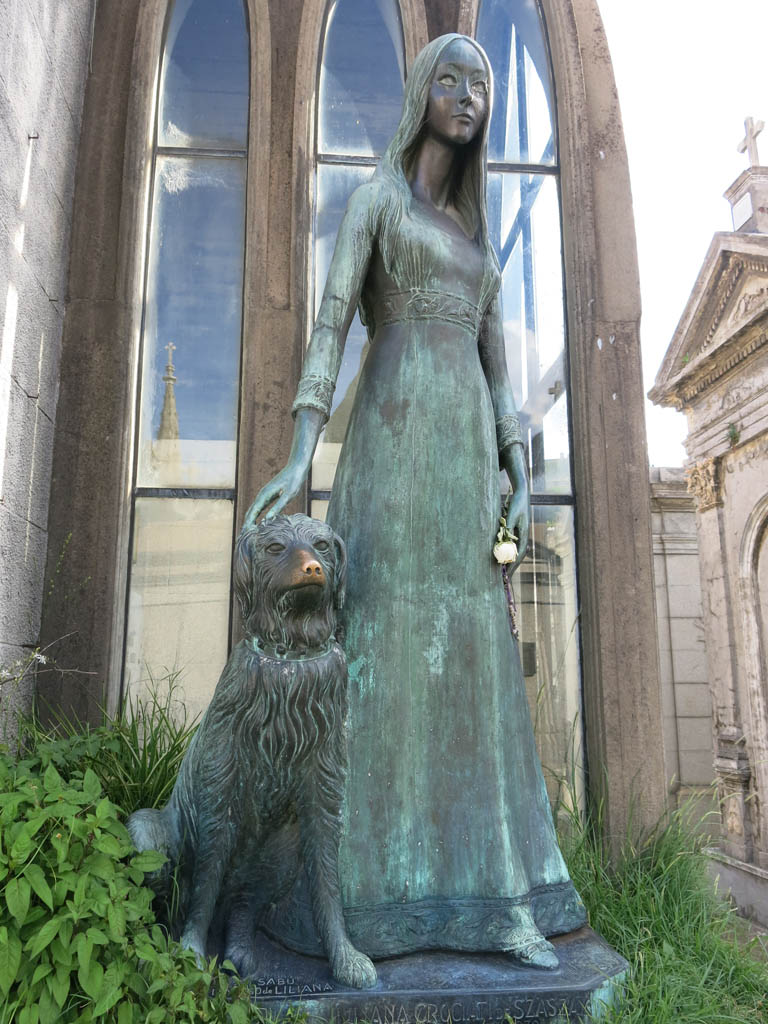 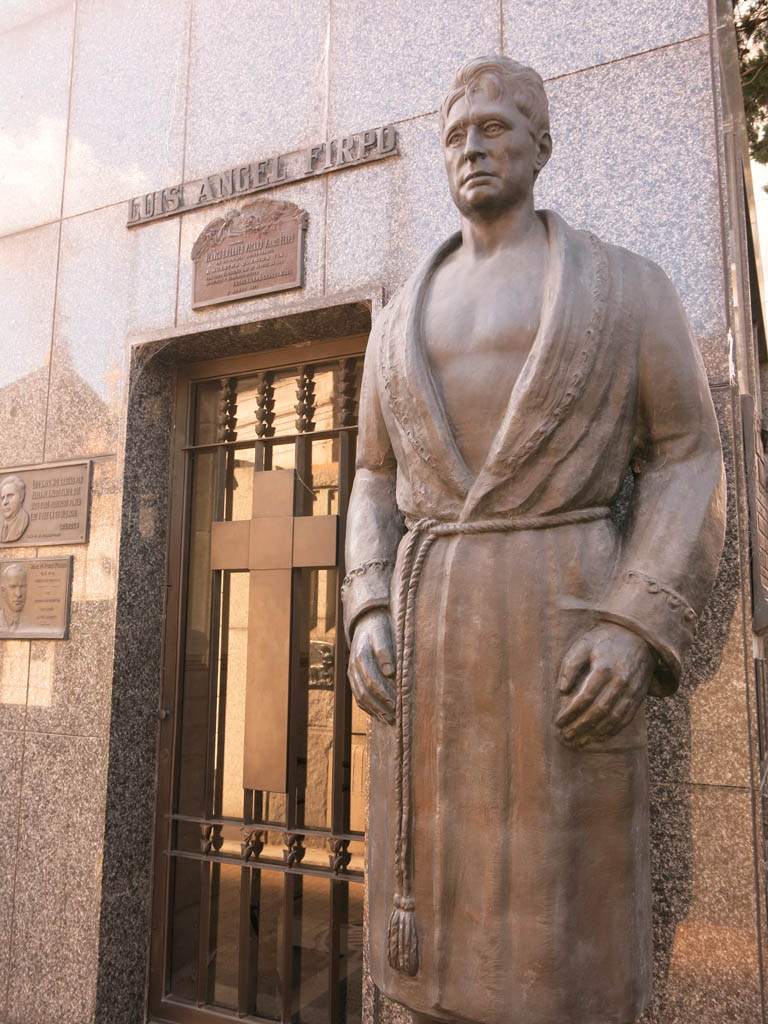 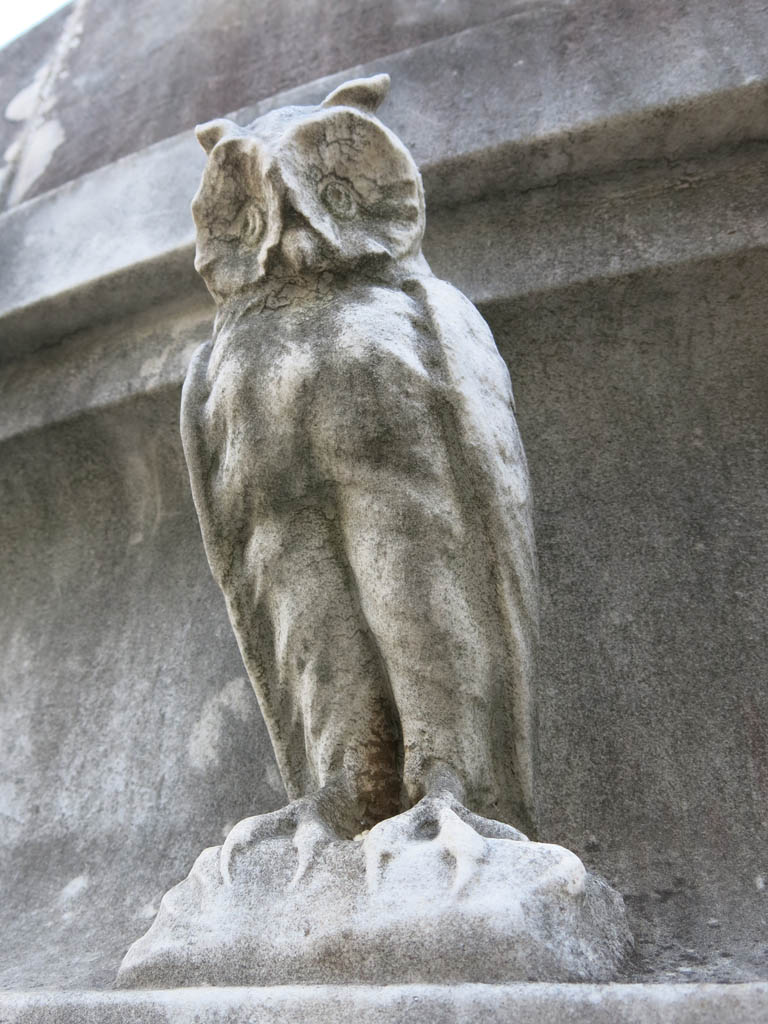 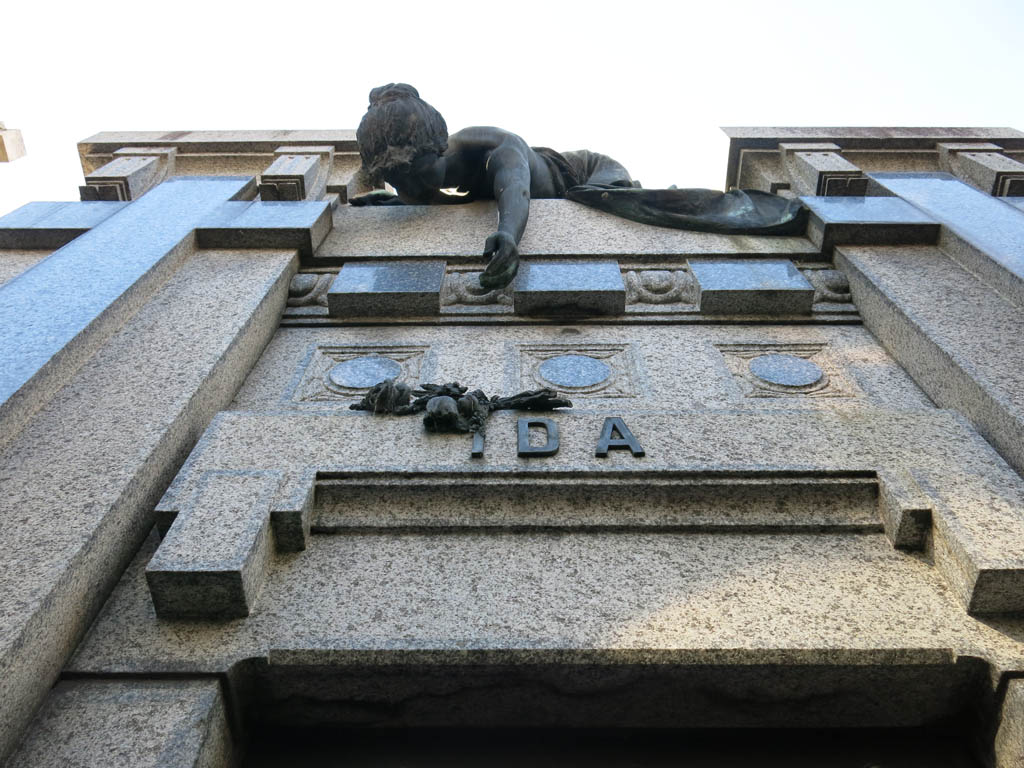 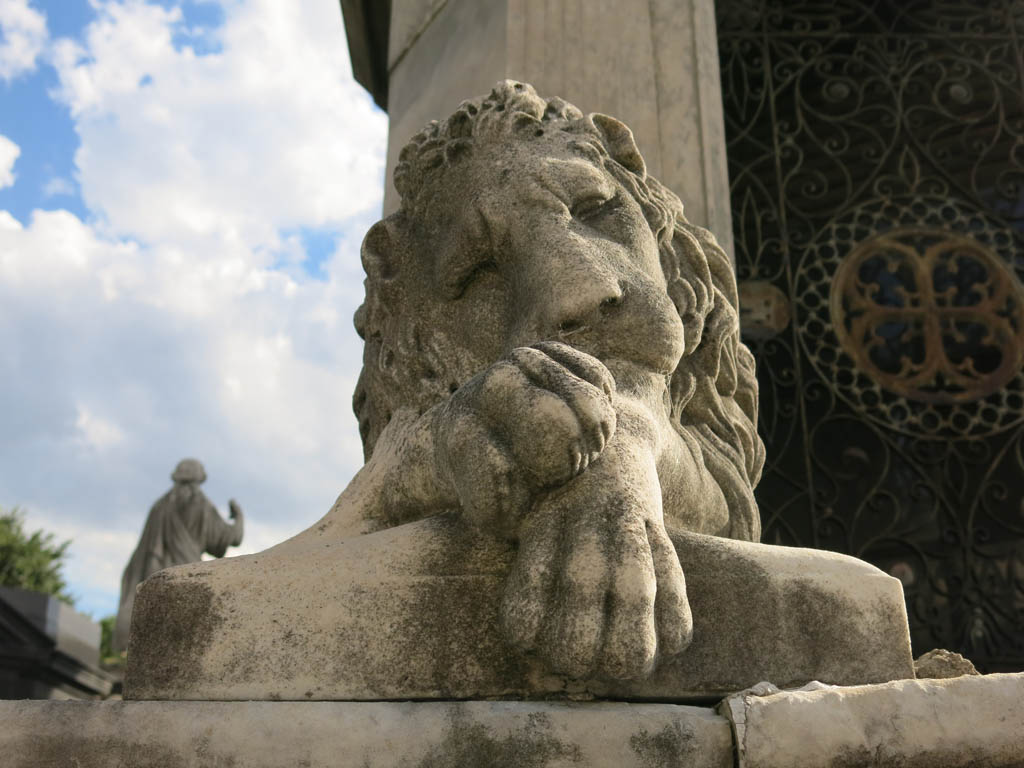 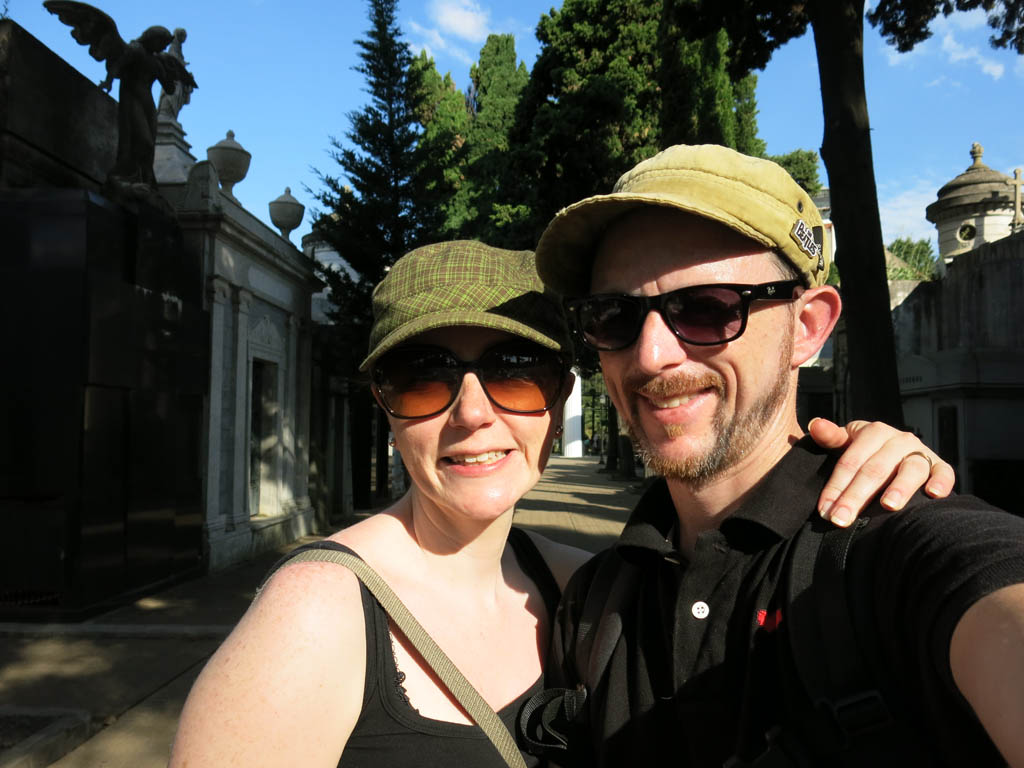 In the end it felt like a rushed almost 2 hours we spent, and could have spent more time. But it was approaching 6pm and we were a bit tired and needed a rest, but also had some dinner plans in mind. So with a quick rest and drink stop, we legged it to the Palermo Viejo district and our dinner destination.

The drink stop involved trying a bottle of the new Coca-Cola version, Coke Life. It seemed it is being trialled in Argentina, before we get it at home soonish. Made with stevia, a more natural sweetener, Kate’s photo montage gives the appropriate review… 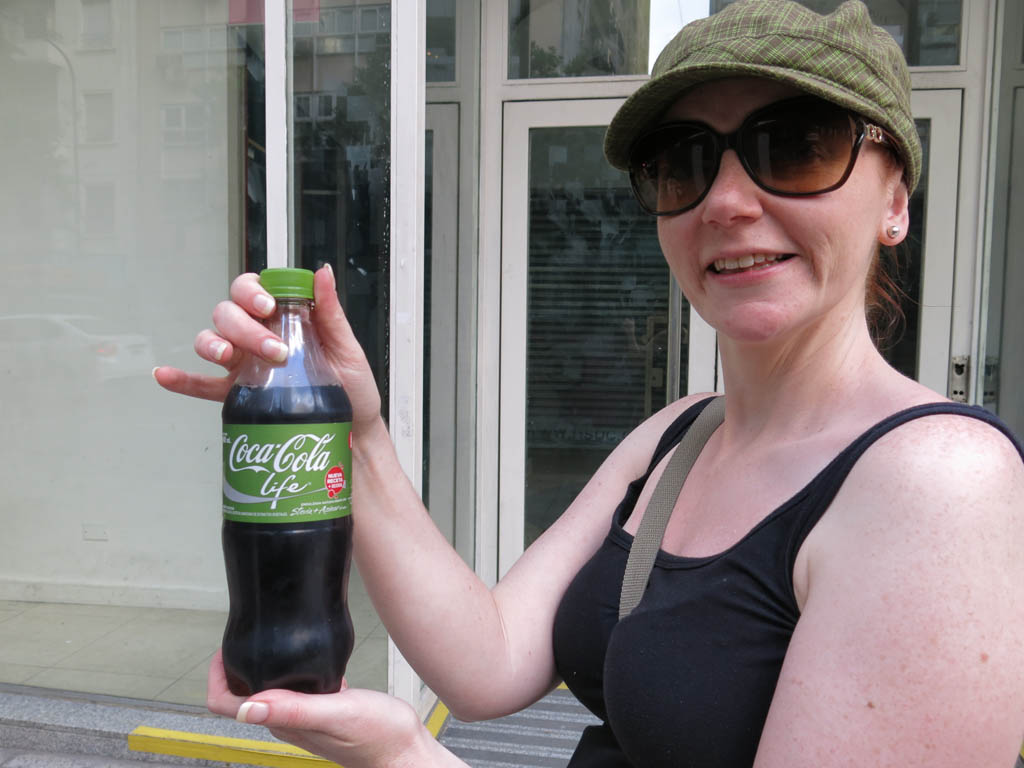 I was a little more ambivalent toward it, but it wasn’t great. Oh well, live and learn.

On our travels, we also came across this bus. Which as the name implied was actually a servicing bus for other buses! It was actually helping out a broken down commuter bus. It bought back glorious memories of chicken buses from 12 months ago. 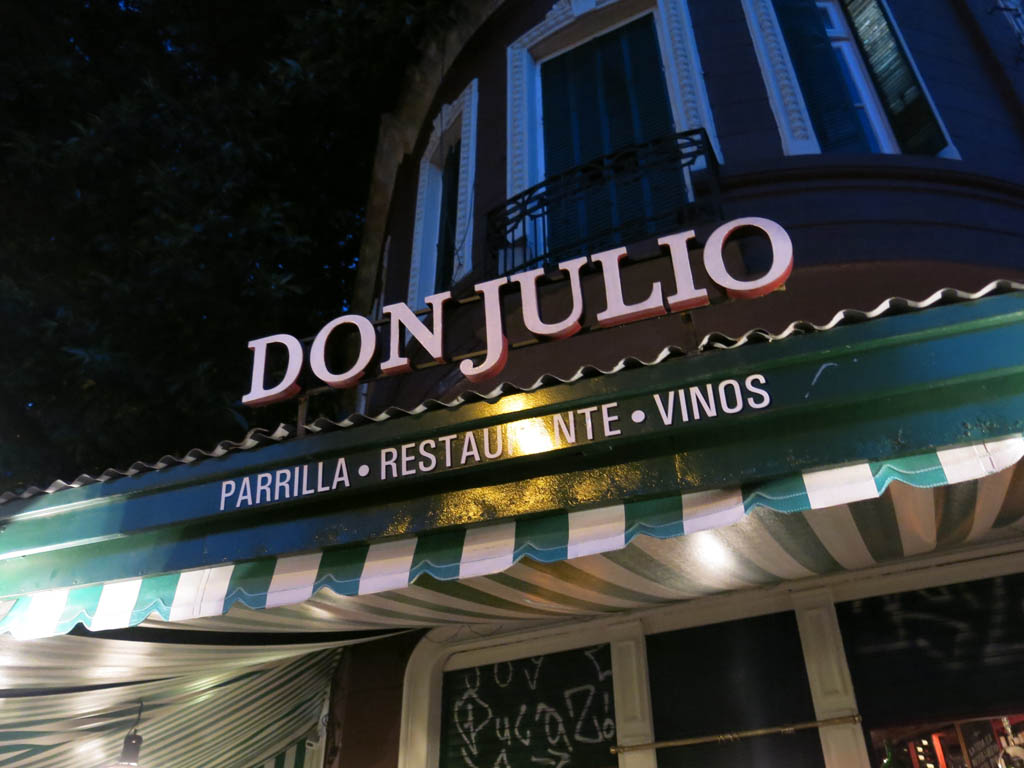 After a bit more walking than we thought, we arrived at our dinner destination… Don Julio. Don Julio is a name of a traditional parilla (i.e steak barbecue place) that kept popping up so we knew we had to try it. Being unable to get a booking at such late notice, we had to try our luck at about opening time, and we scored a table no problems. 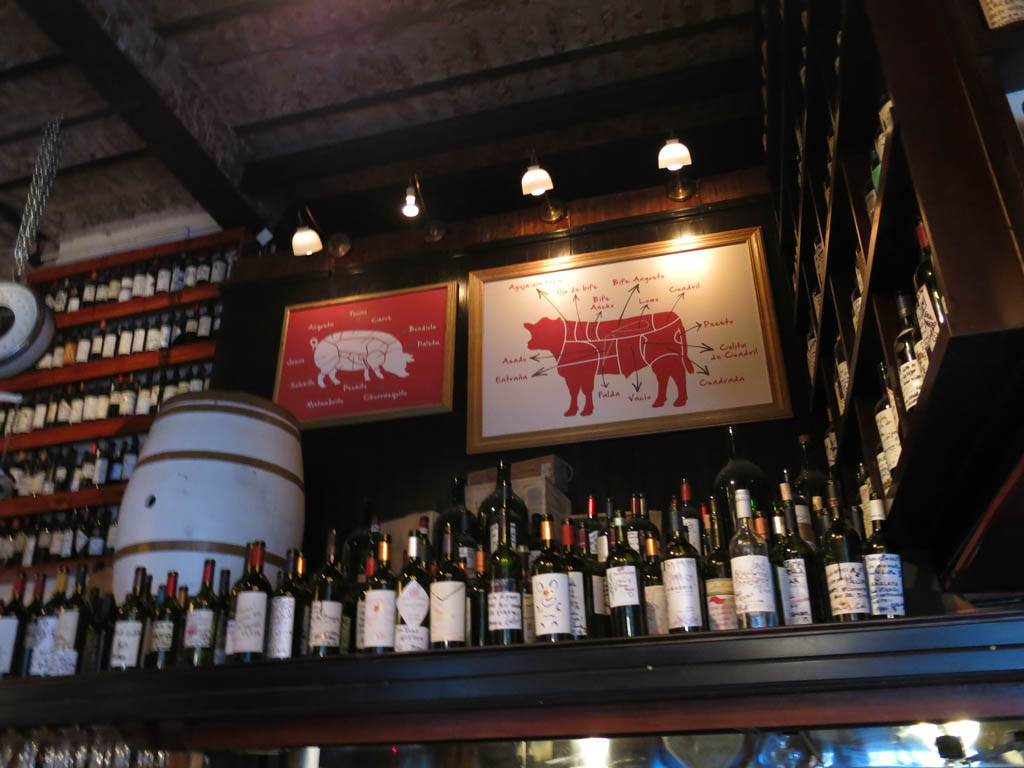 in case we needed help

On entering we were greeted with the handy animal chart. Apologies to my vegetarian friends reading this… you may want to skip the rest of this entry (but it doesn’t get to graphic don’t worry). 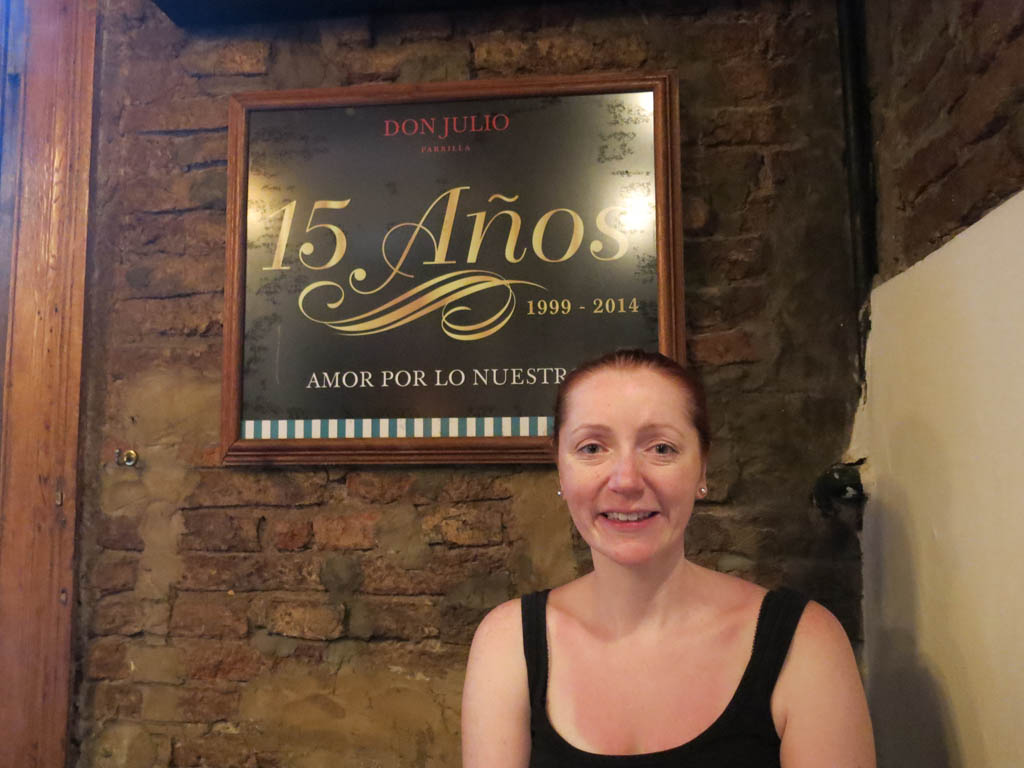 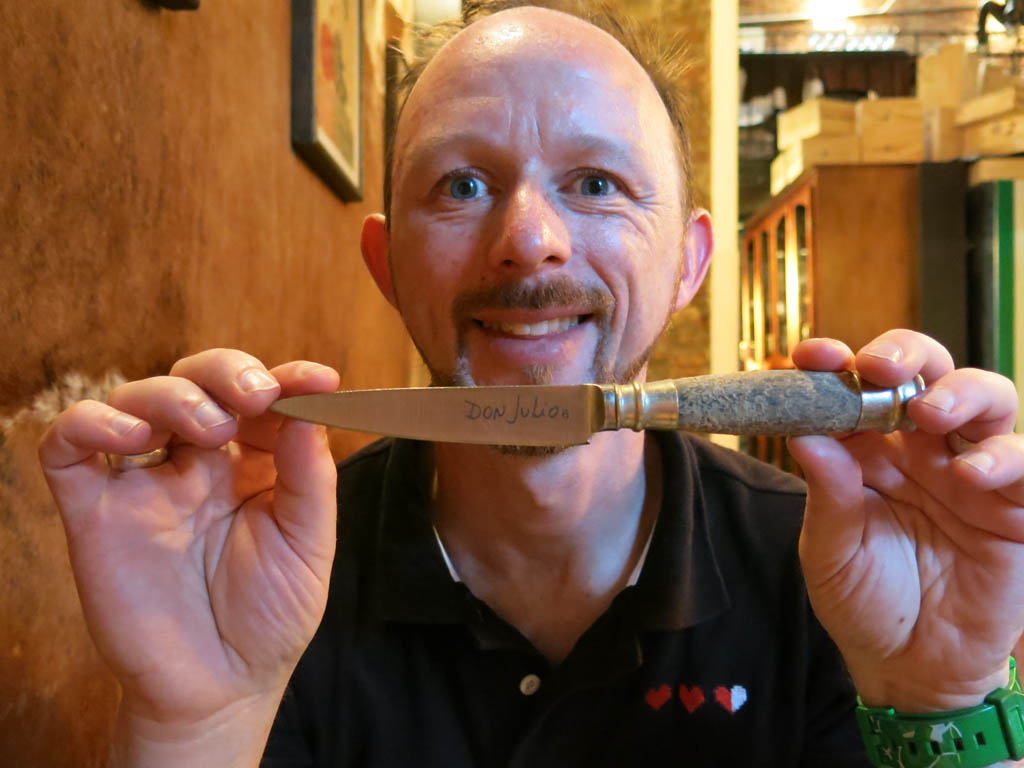 now one of these would be a cool souvenir

The restaurant had a great vibe… felt upmarket without being too fancy, super attentive and helpful staff, but happy to have hot and weary travellers like ourselves in there. Awesome cutlery too. Thumbs up! 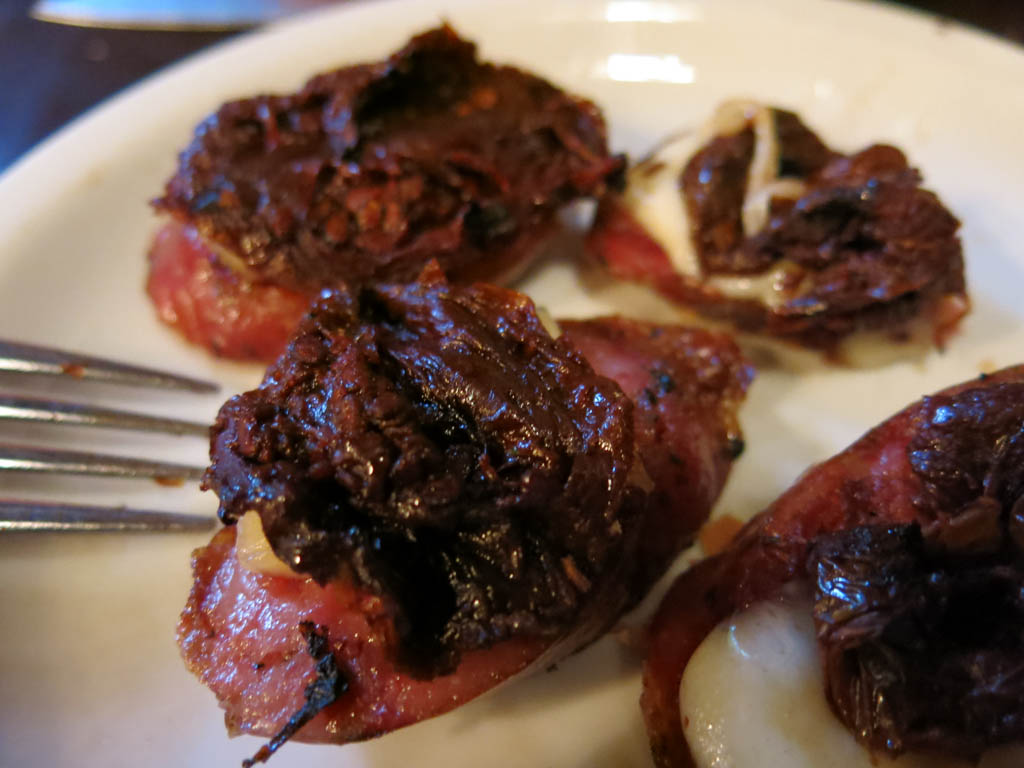 The toughest part though was decided what delicious food to order. The first dish to arrive was our appetiser. We decided to share the house speciality chorizo. It was chorizo sausage with cheese and rehydrated sun-dried tomato. And man it was amazing! While lacking in hotness (meaning Kate was up for it) it made up in tastiness. This was a big win from both of us.

Our side salad arrived (a tasty pear, leaf, cheery tomato and blue cheese mix) as a precursor to the main event… steak. Of course it was going to be. Kate opted for the rib eye, while I went the sirloin. And man it was huge. Quite daunting in fact! 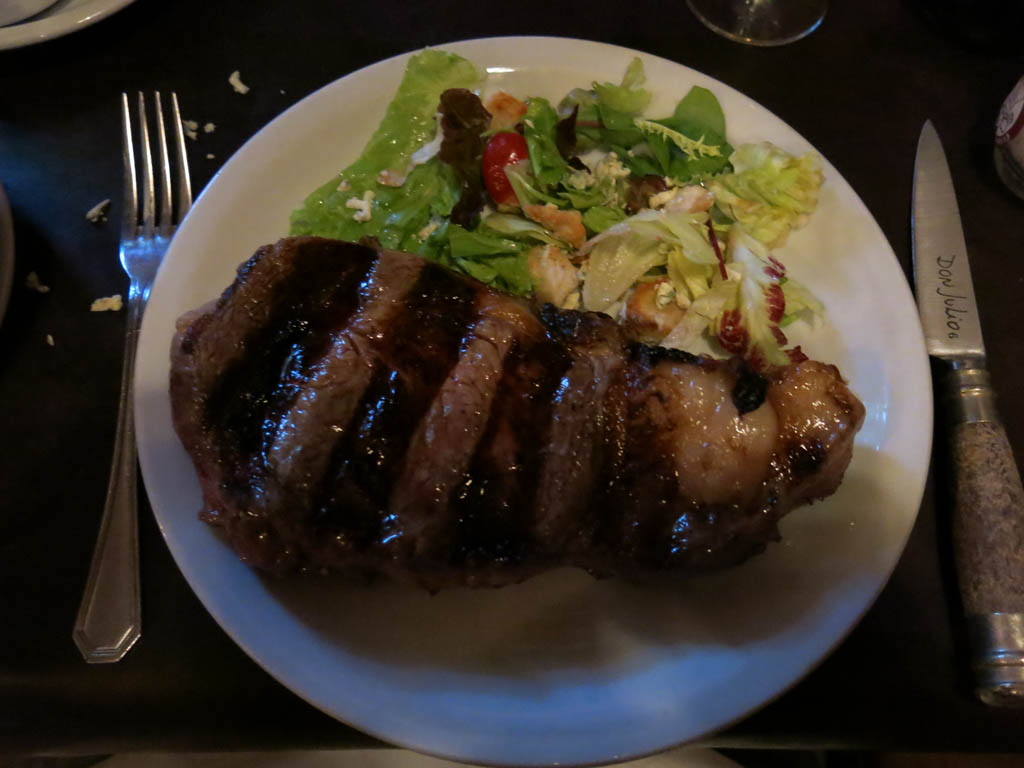 that’s a big piece of meat

We wasted no time and tucked in to our dinner. Kate was loving her steak. Me, I thought mine was pretty great without being jaw droppingly great. It was still amazingly delicious, but maybe I was expecting to eat the BEST steak ever. Instead it was probably a top 5 steak. Still pretty good huh?

It almost did me in though, barely getting to the end. But I struggled through. It was all tasty, especially the side dishes, and in the end, while we didn’t quite finish everything, we got pretty close.

With bellies full, and a bill that was only about $120 (crazy for such a huge and great meal), it was time for a taxi back to the hotel and the attempting of some sleep. Day one in Buenos Aires… done!