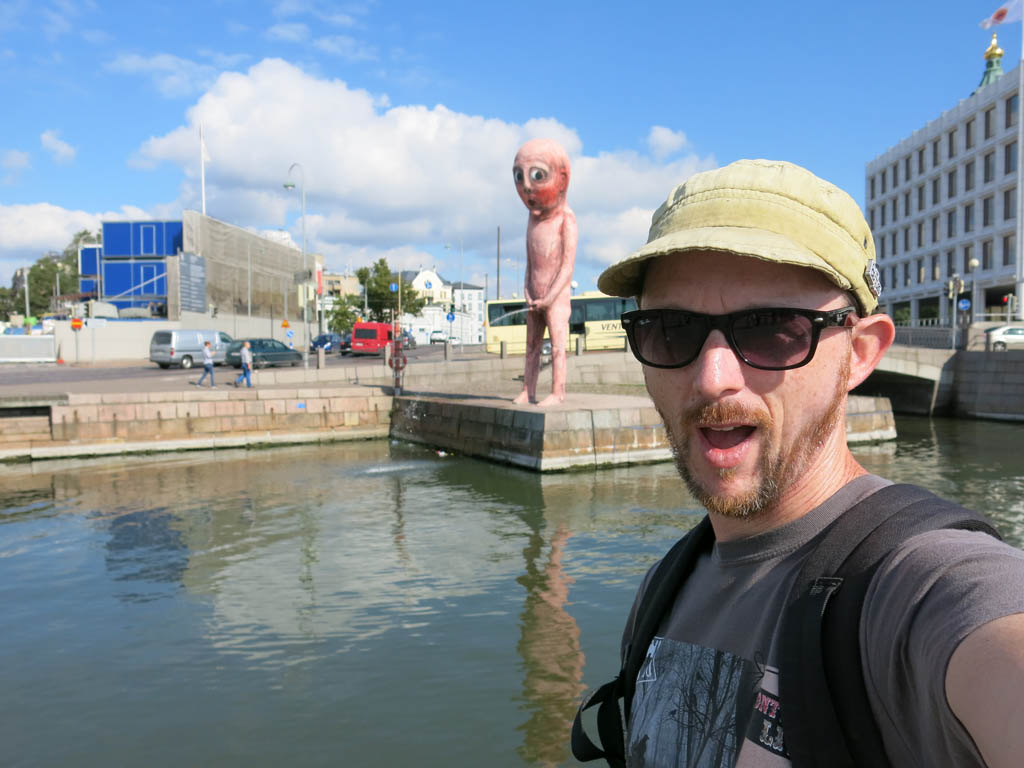 what have i just seen?!

Sorry I haven’t posted in a bit, but as I mentioned it is back to work now, and so while I am having fun, it is fun that is probably not as exciting to read about for you all (research papers! seminars! grant applications!), so I haven’t felt compelled to share. But since a week has passed now, and I have got up to a few things, it is time to fill you in. 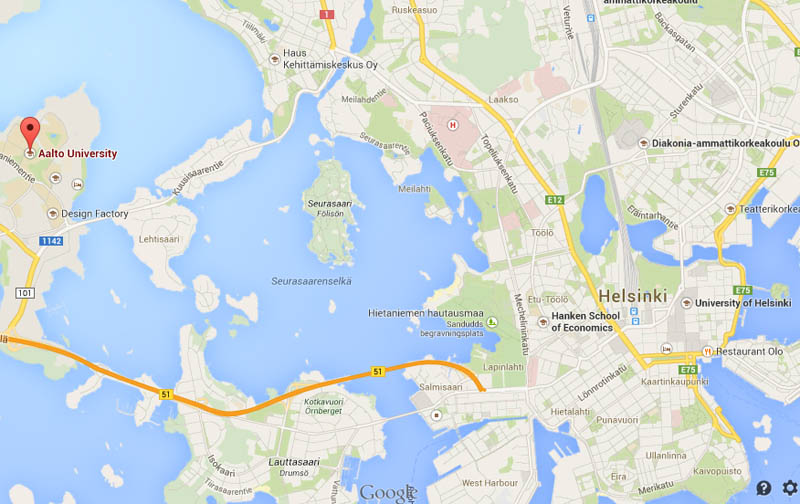 this is where i am!

I arrived in Helsinki a bit over a week ago, just in time to meet some of my new work colleagues before the weekend. I am based at Aalto University, which is about 20 minutes outside central Helsinki, in the suburb/city of Espoo. So close enough to Helsinki central for regular visits, but just out to be amongst some lovely scenery. I was greeted by my host Lauri and colleague Paivi on my arrival to the university. Lauri spent some time at Monash a couple of years ago, and we had crossed paths a couple of times since, so it was great to see him again, as well as Paivi who I had started some work with already in Sweden, and they immediately began making me feel at home… helping me check into my apartment at the uni and taking me out for dinner. It was a nice comforting way to kick off my Finnish month. 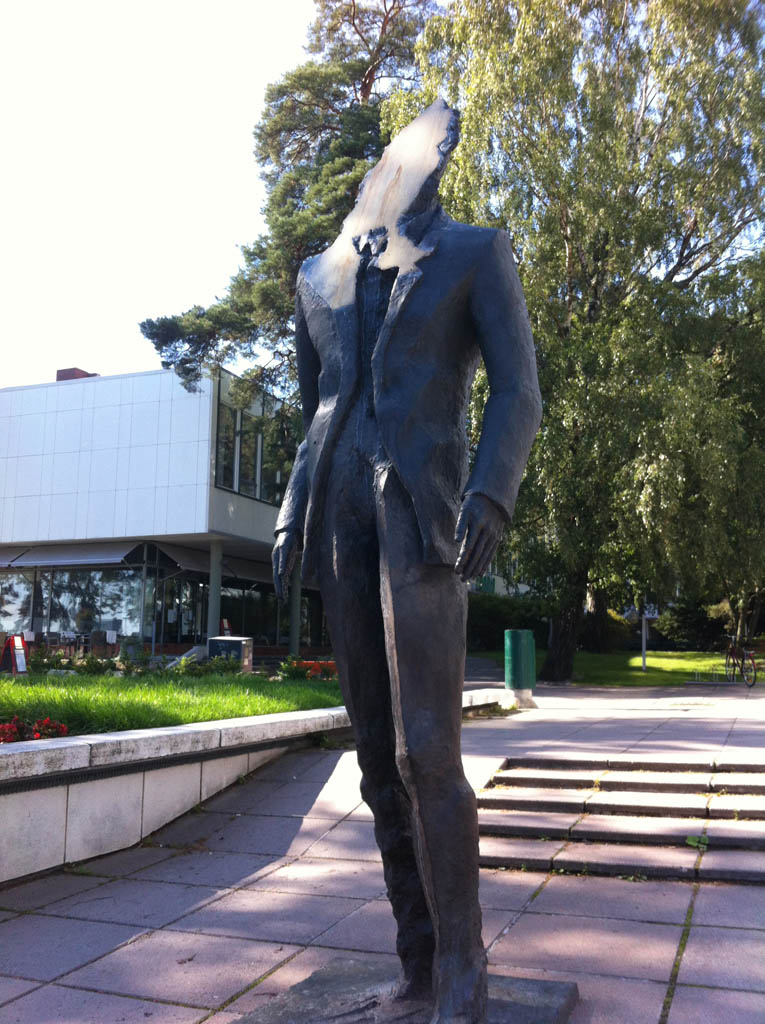 That weekend was spent doing… well not much actually. Even though I was in a new country, priority was pretty much resting after the craziness of the Turkey trip, and catching up on things like laundry and email (yes, both can be chores). I thought about heading into Helsinki, but after some sleeping in and just relaxing, I decided against it. Rather I did some wandering around Espoo, to see what as nearby. It seems that Sundays are very quiet, with very little open. But I did find some shops and even the odd melting head statue in my travels.

The week was spent focusing on work. I made an effort to try and get immersed back into the work, since I felt quite a bit had drifted by. I had to get back up to speed with my myriad projects that were on the go, and work out what work emails really had to be dealt with (not many!). While the holidays were amazing, it was good to get my head back into work things. So I spent my time working out at what stage I was at in about half a dozen different research papers I am writing, as well as a couple of grants, and some data visualisation. My list of projects and things to do is quite big, and that is without any new Aalto popping up, so I thought it best to get cracking! 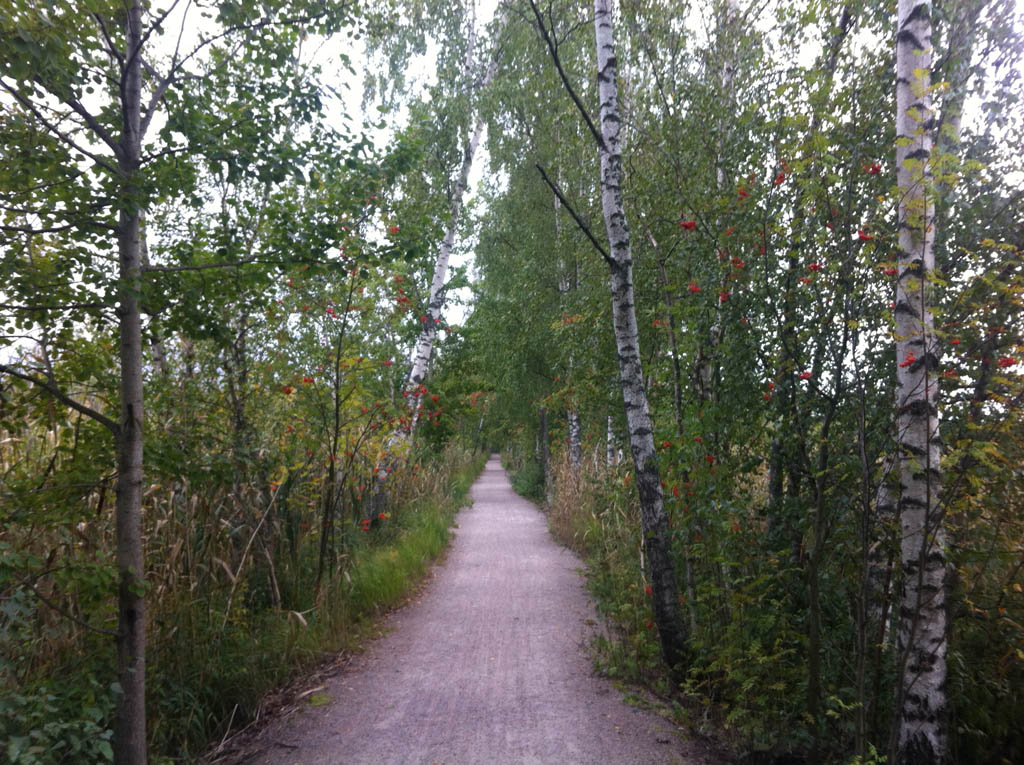 My evenings were all pretty low key. I spent most going for a walk after work, to see what I could find about the campus and in the surrounds. Aalto Uni is located by the sea and so there are plenty of costal walking tracks. Not costal in the beach sense, but nice walking paths through the plentiful forest. So each night I would find a different path, or even start wandering to some of the nearby islands. On my travels I found a gallery that has an Edvard Munch exhibition opening in a week. Score!

In no time at all a working week had passed, so I had the weekend to enjoy and get to exploring proper. Lauri, hearing that I was doing quite a bit of walking after work, graciously planned a Saturday walk/hike in a nearby National Park. Given the weather was doing so well for the changing season (low 20’s and plenty of sunshine) it sounded like a great idea. So with a bus, then a train, then another bus, we were soon at Nuukiso National Park. 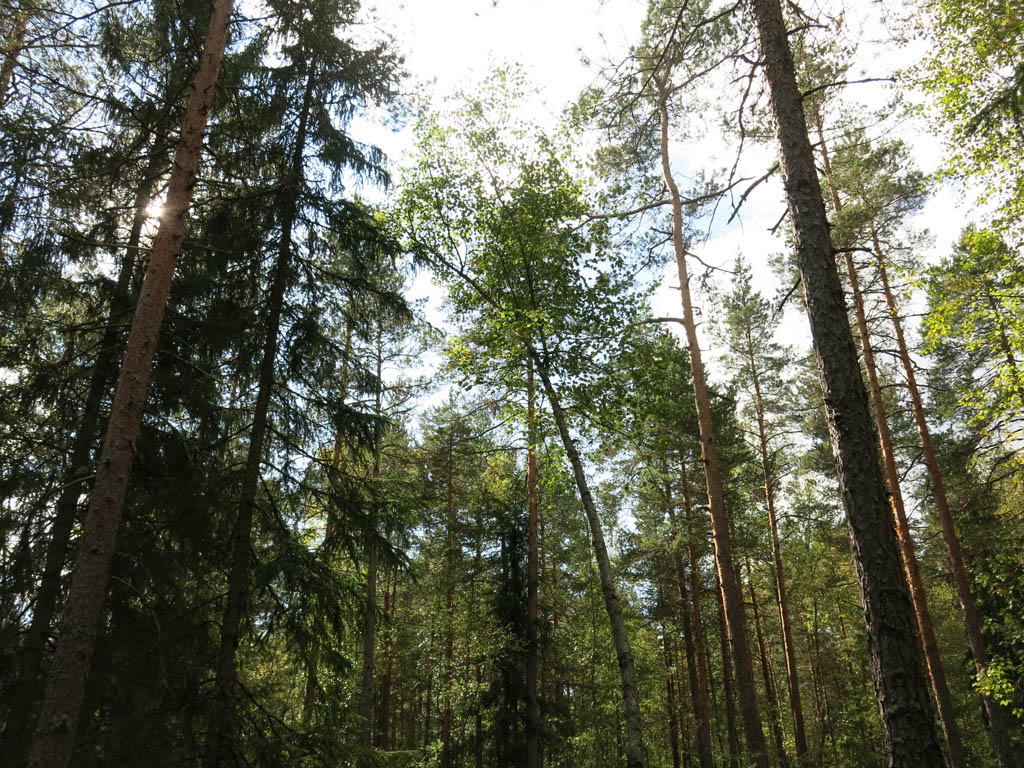 It seems Finland is blessed with many national parks, some of which are easily accessible from the city. Speaking with Lauri there is also a national culture of spending time in these parks, since they are all free for people to visit at anytime, and to camp virtually wherever they like. As such, on such a glorious Saturday, there were many people, especially families and teens, out hiking. 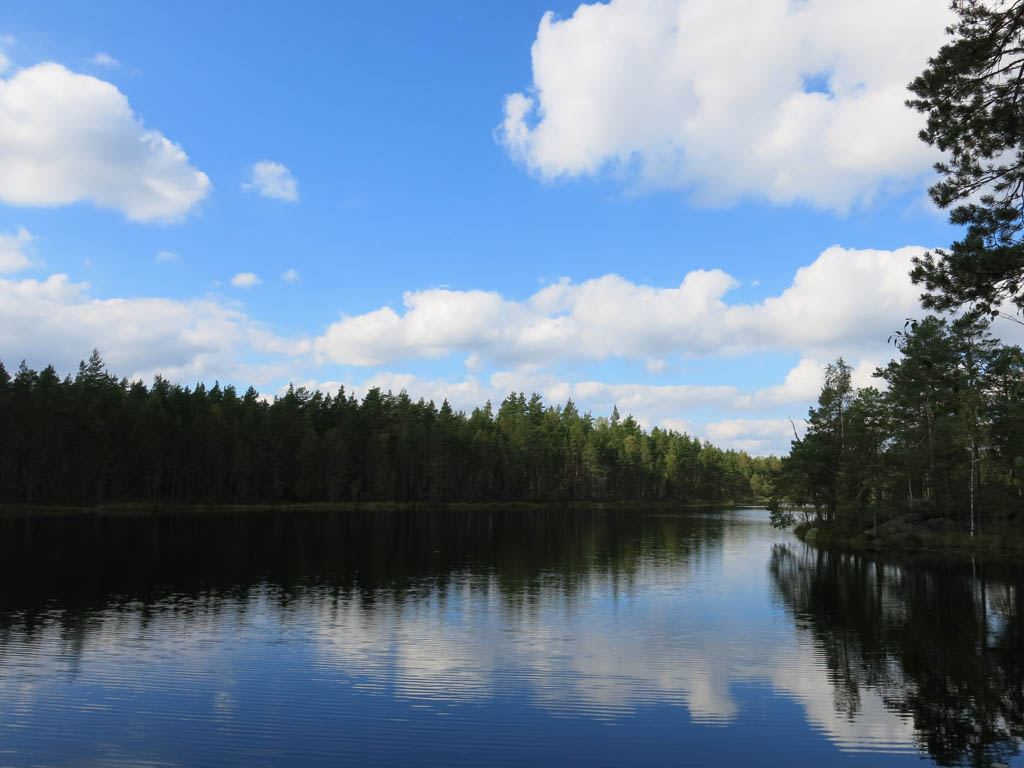 We started at the end of the bus line, quite a ways into the national park, and then spent the next few hours hiking about the trails and lakes within. The trails were great, wandering through birch trees, and surrounded by lakes. 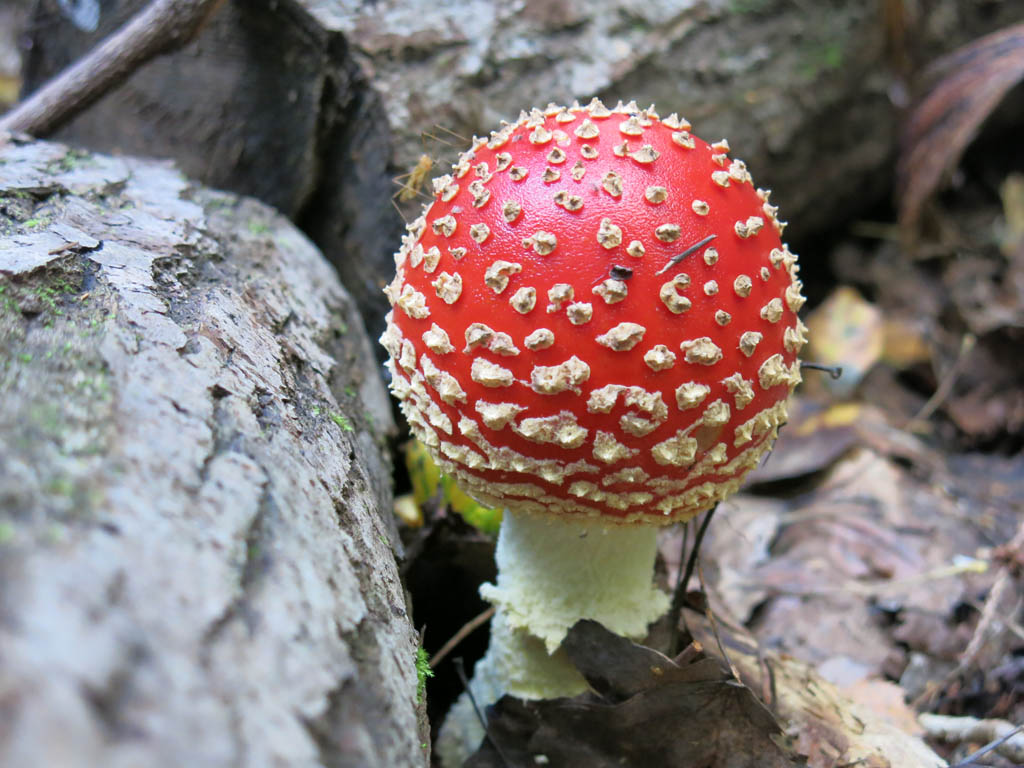 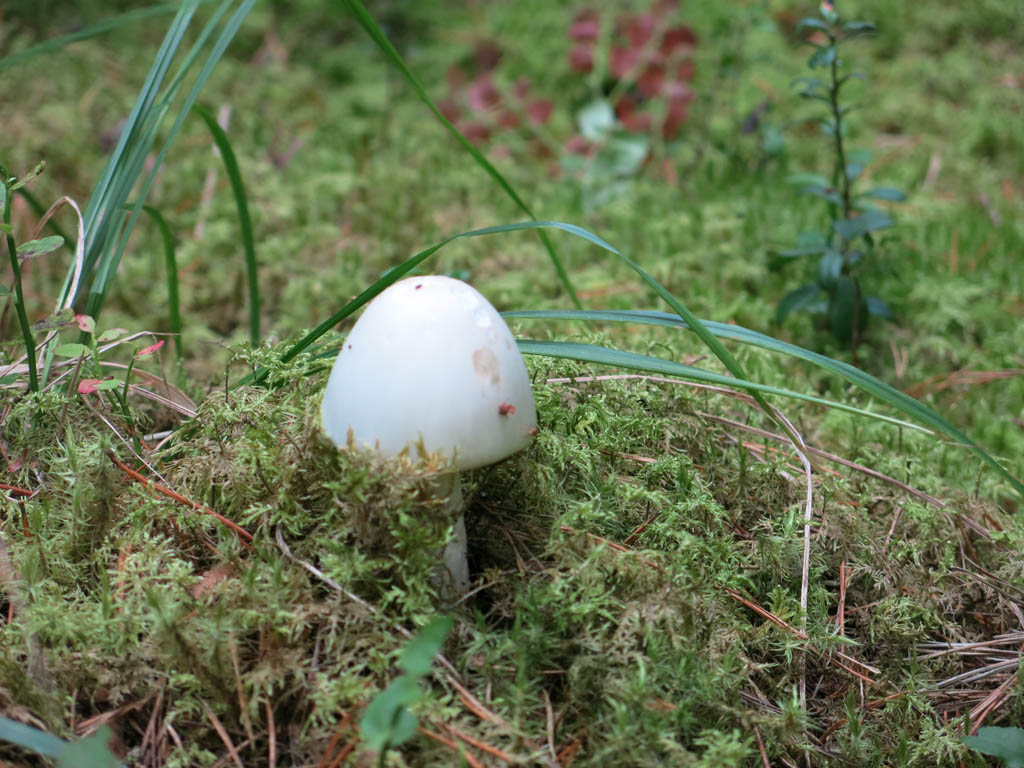 this guy is no good to eat either 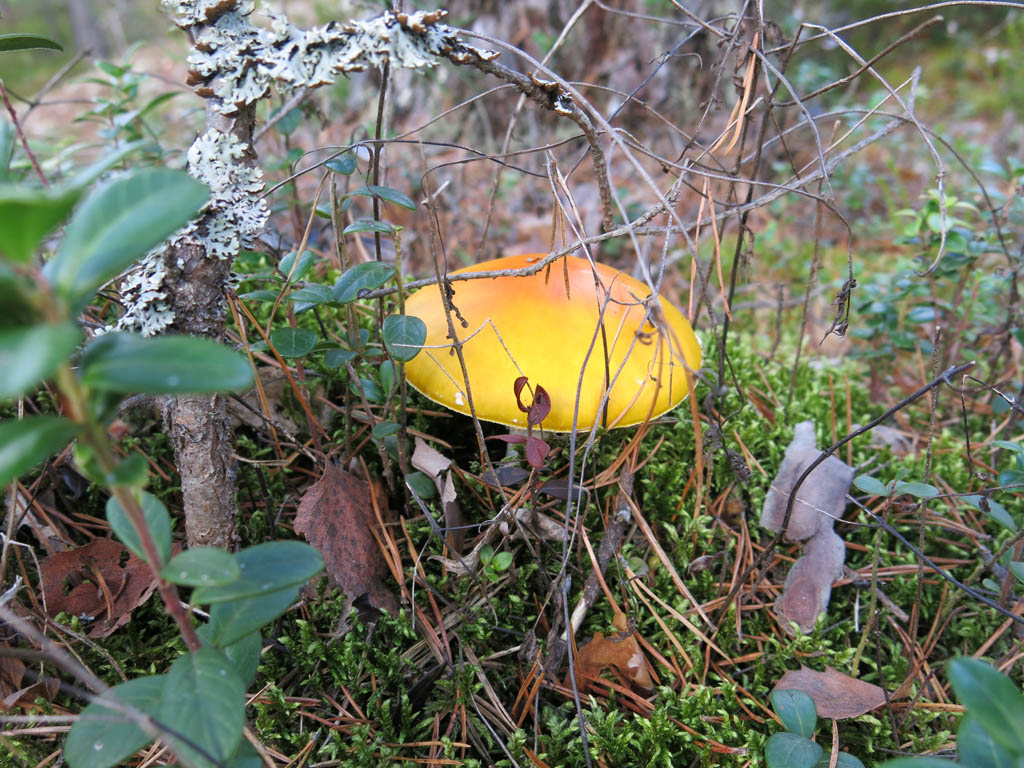 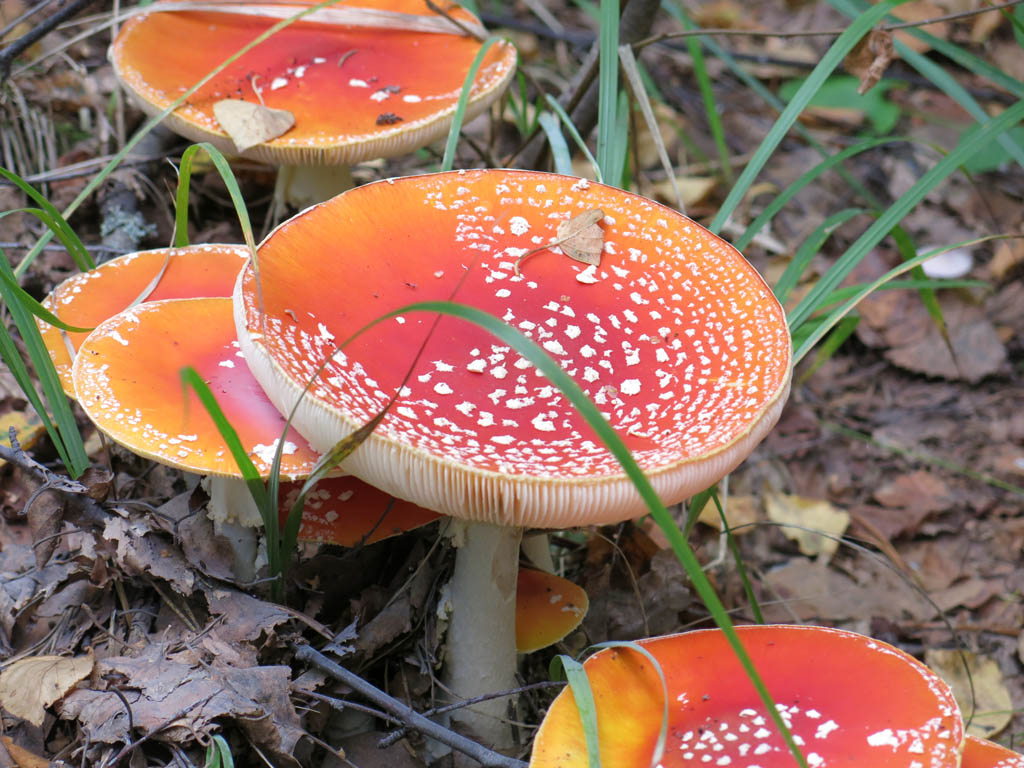 One of the popular things for many out in the park was going mushroom hunting. Hopefully they were all well trained, as many were deadly poisonous, and I certainly wouldn’t trust myself, since most the pretty ones will kill you in no time at all! I couldn’t help snapping pics of some of the mushrooms I found.

In the end we covered about 12km which I was pretty happy with! Most was easy, but there was the odd steep stretch, so I felt like I had a fair workout and certainly slept well!

Today (Sunday) I decided to explore Helsinki for the first time. It seemed from some reading that Sunday is not the best day since much is actually closed (shopping wise), but as the museums were open, I thought it was another good way to spend a sunny autumn day. 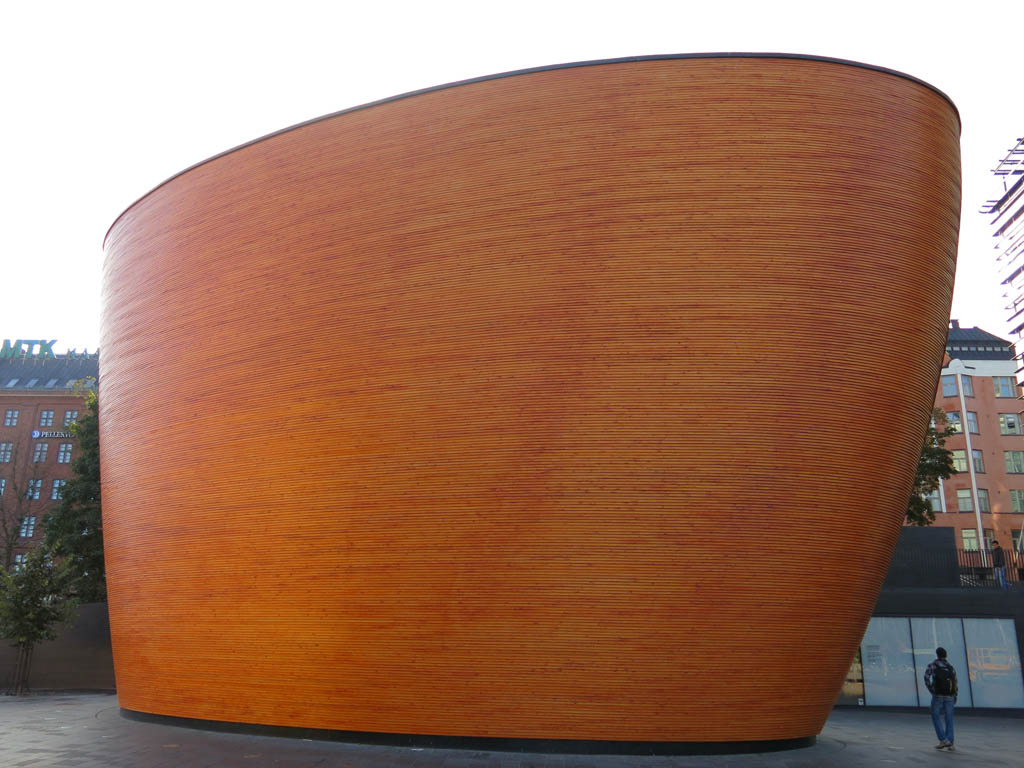 is this an ark?

When I got into town and out of the bus station I was greeted with this large, odd, wooden building. Turned out it was a non-denominational place of worship, designed to be a quiet refuge from the city. Nice! That was my first taste of the design culture that seems to permeate Helsinki. 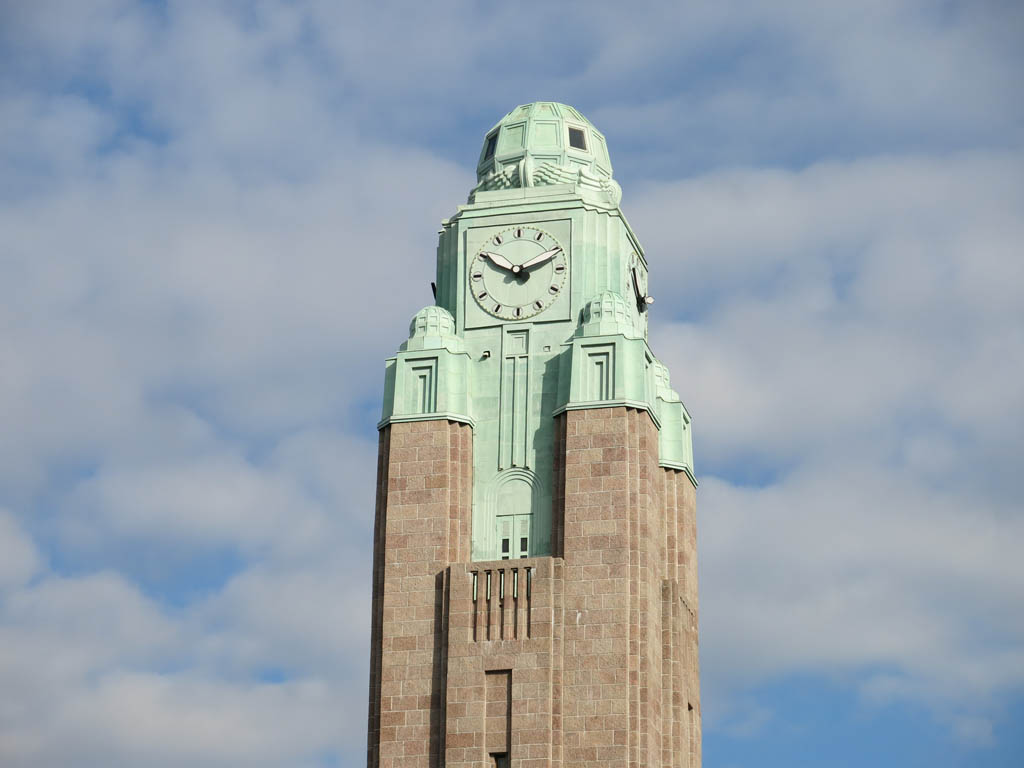 On my wandering I came across the central train station. It seemed to be a grand building, but unfortunately much was behind scaffolding. The clock still towered over everything though. 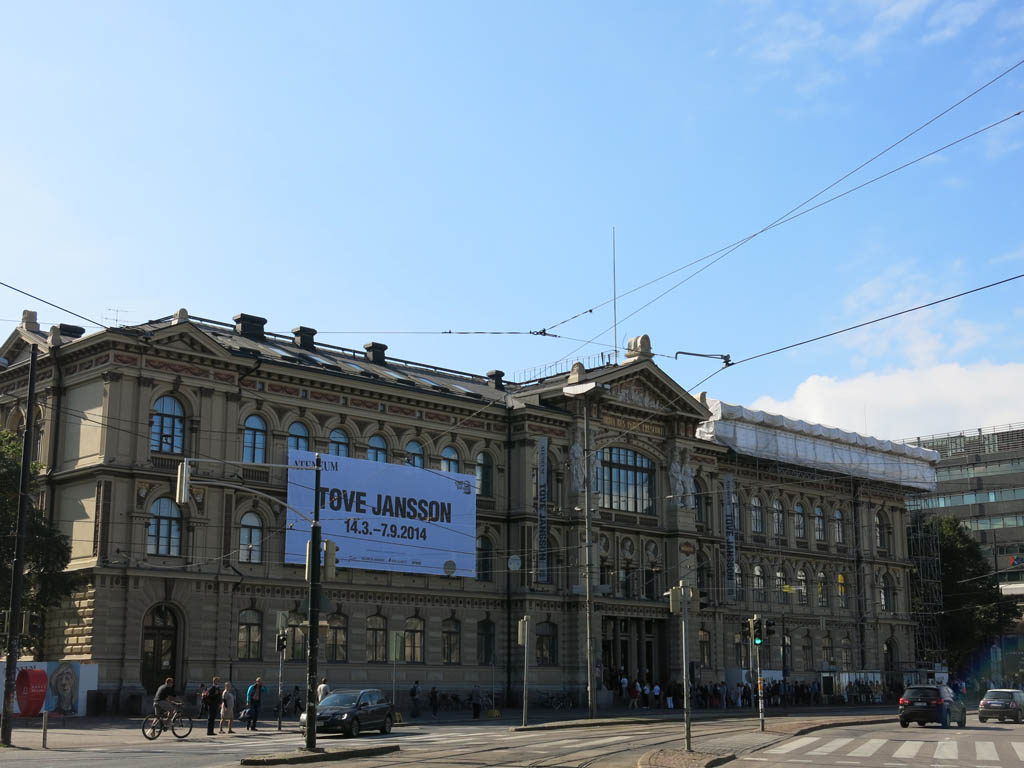 The main reason for going in to Helsinki was to visit the final day of an exhibition at the Ateneum Art Museum, one celebrating the work of Tove Jansson. I did not know much of Tove, except that she is beloved by the whole country for the creation of her Moomin characters, my only entry point into her work. If not well known by Australians, I think a lot us would recognise her white, puffy Moomin characters from somewhere. 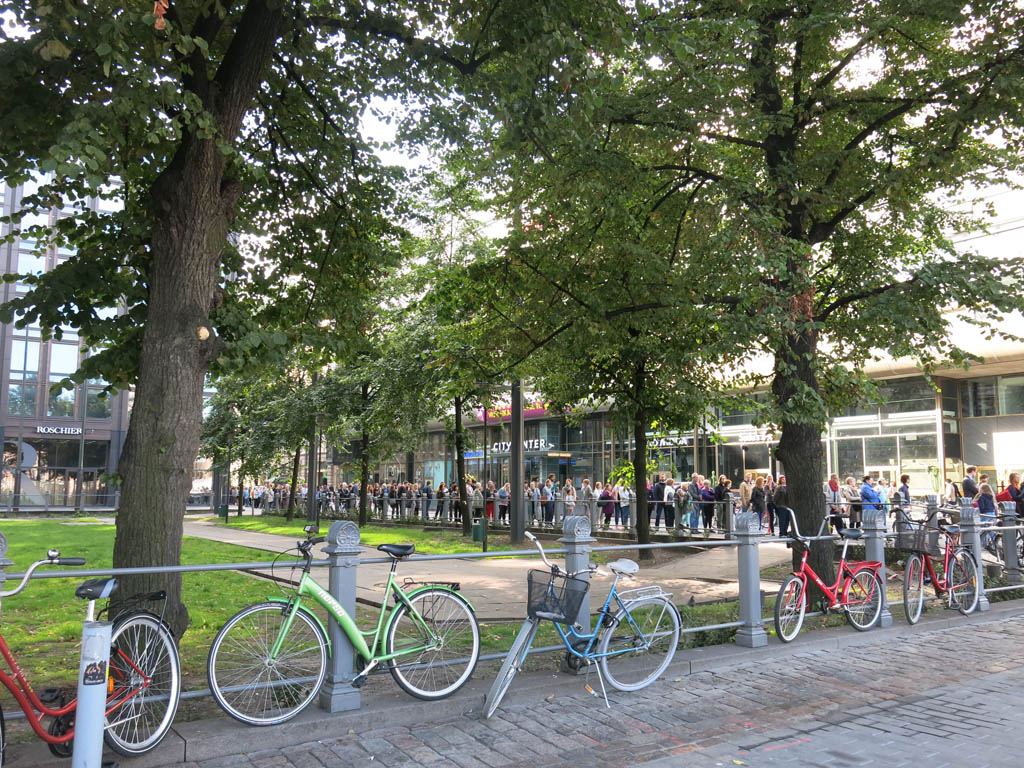 On some advice, I arrived the the gallery early, but not early enough it seemed. About 15 minutes before opening I was way back in a queue of last minute exhibition goers. But the line moved reasonably quickly, and I was in the exhibition. Rather than focus just on her children’s book characters, she was also a very accomplished painter, something which, while known to Finnish people, had not been widely seen. So it seemed it was a delight for many to see this work. The exhibition was quite large and all encompassing, and was very cool to see. It was fascinating to see the juxtaposition of serious works, with political WW2 commentary, with children’s characters, and was well worth the visit. 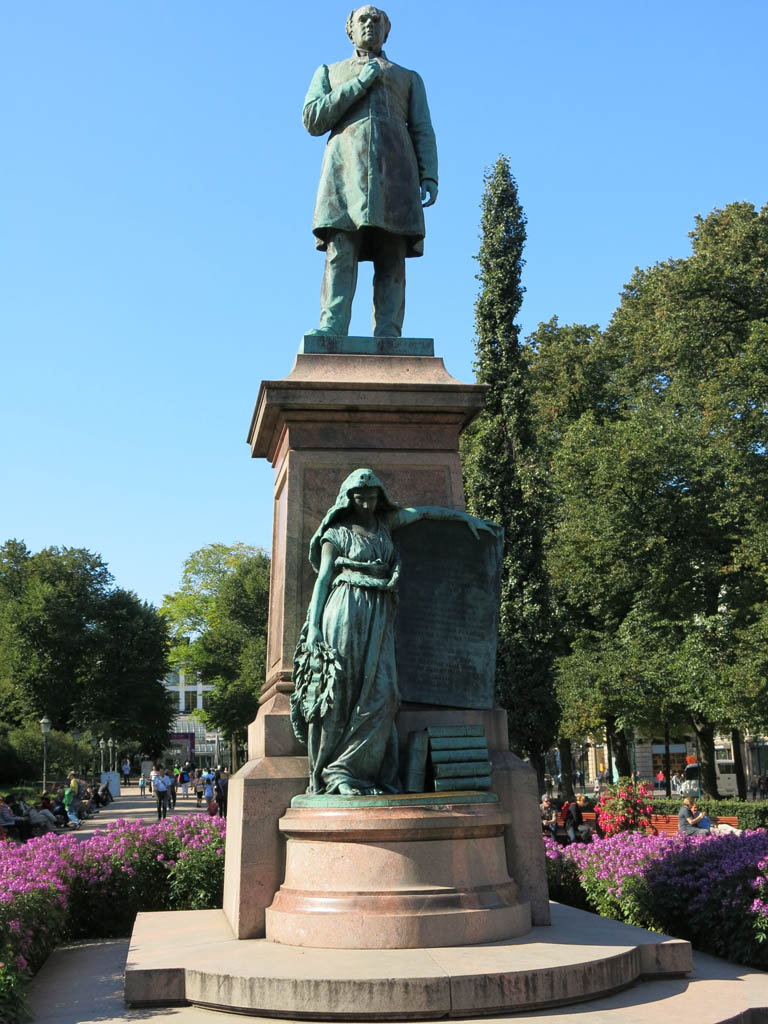 statues in the park

I didn’t have any other definite plans of things to do. It was a day of exploring and getting to know Helsinki, given I have quite a few opportunities to explore. So I decided to head down toward Esplandi Park, and the surrounding shopping streets. This was quite pleasant, with the street cafes and high end stores. It had a bit of a Champs Elysees feel about it, although much less crowded and quite a bit shorter (and lacking an Arc de Triomphe and Louvre obviously).

This led me to the waterfront, where ferries to all kinds of places were docked. There I found the Kauppatori markets, filled with local handicrafts and food geared towards tourists. As a result everything was super expensive. Finland is expensive to start but the prices of the gifts were a bit prohibitive to going crazy. In the end I gave gift buying a miss for the time being, knowing I would be exploring much more over the coming month. 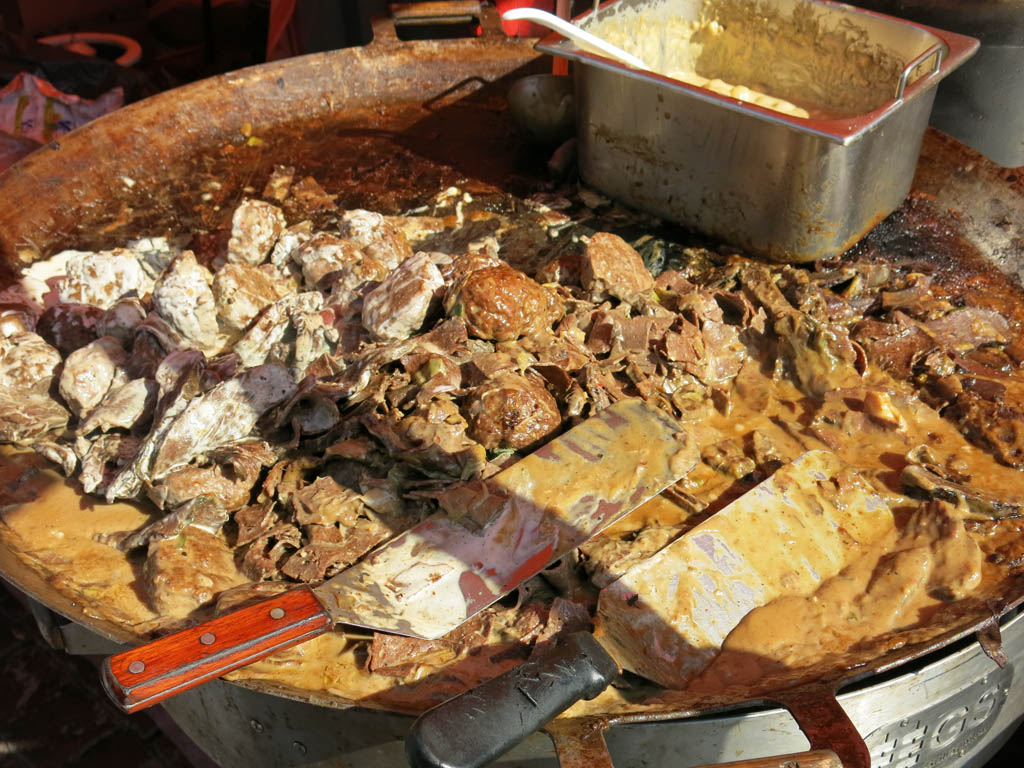 a big pan of reindeer

I did take some time out for some lunch though. Now you are all probably looking at the pic above and saying “what on earth did you eat Matt?!?!?”. It’s not that wacky actually. What you see is a collection of Reindeer meat and meatballs. As mentioned, a lot of the eating seemed geared to tourists, so reindeer was on all the menus, along with fish. I had eaten reindeer before, but when in Helsinki hey? So I had a plate of reindeer meatballs that were OK, if not spectacular. 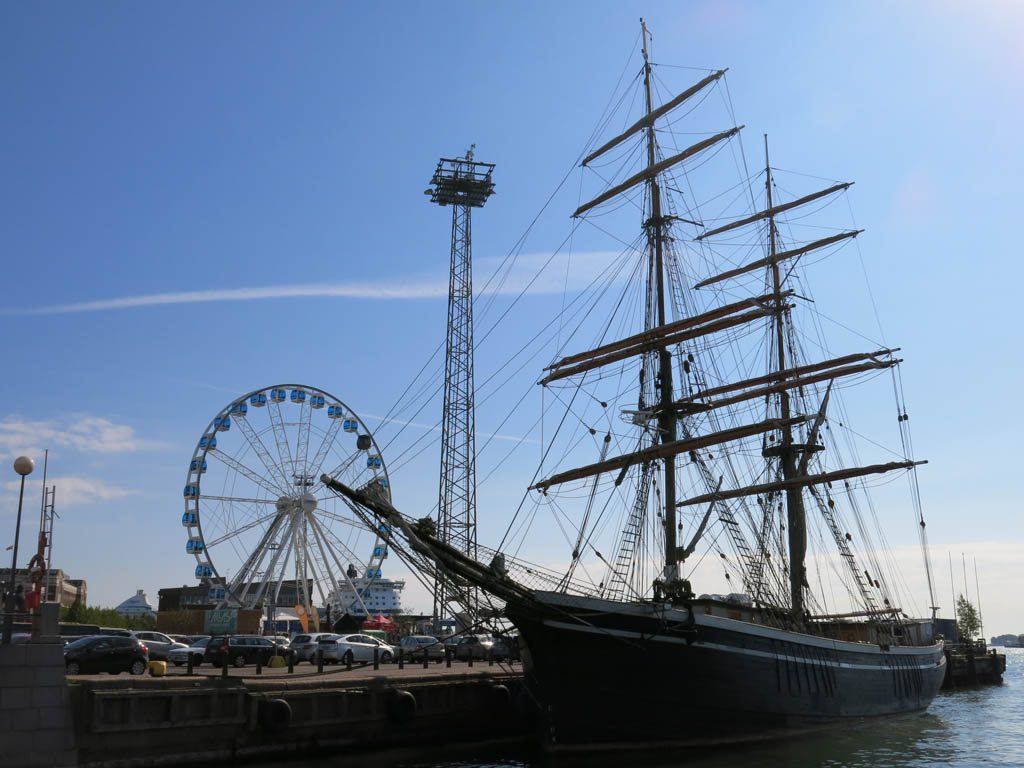 the ferris wheel was not too impressive

While down on the water I found a few other things of interest. One was a small “Helsinki Eye” type ferris wheel, that I wasn’t sold on going on. Didn’t seem that big! And then there was… 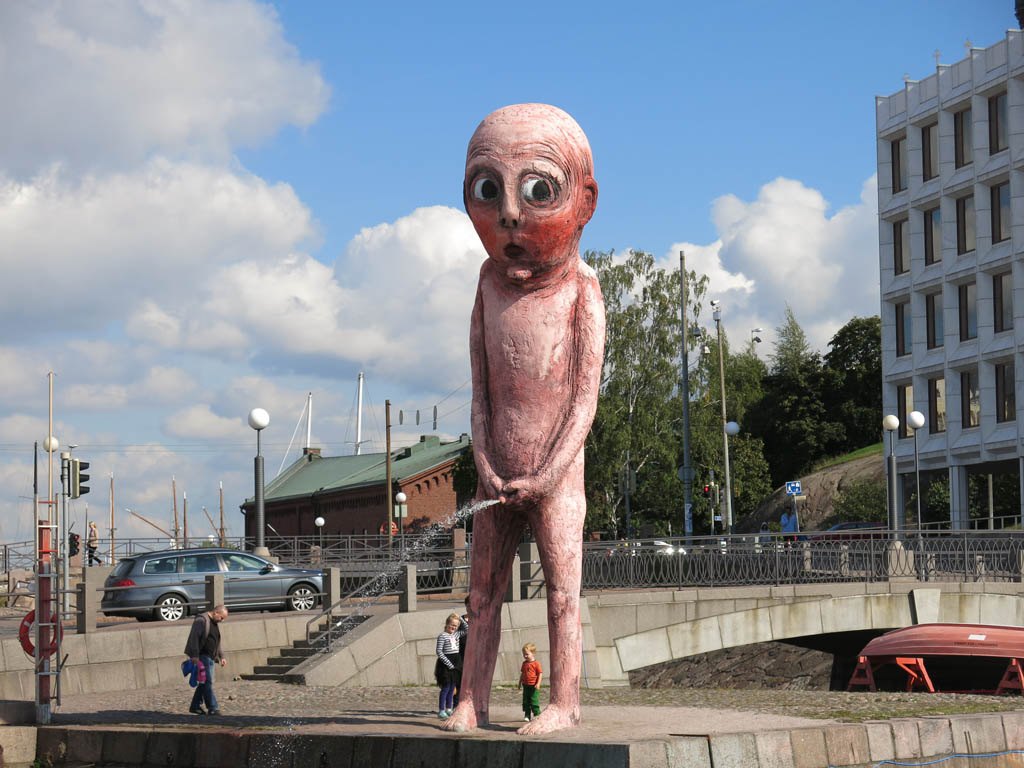 This was a bit more interesting! A rather cheeky public art work. I think the title says it all… 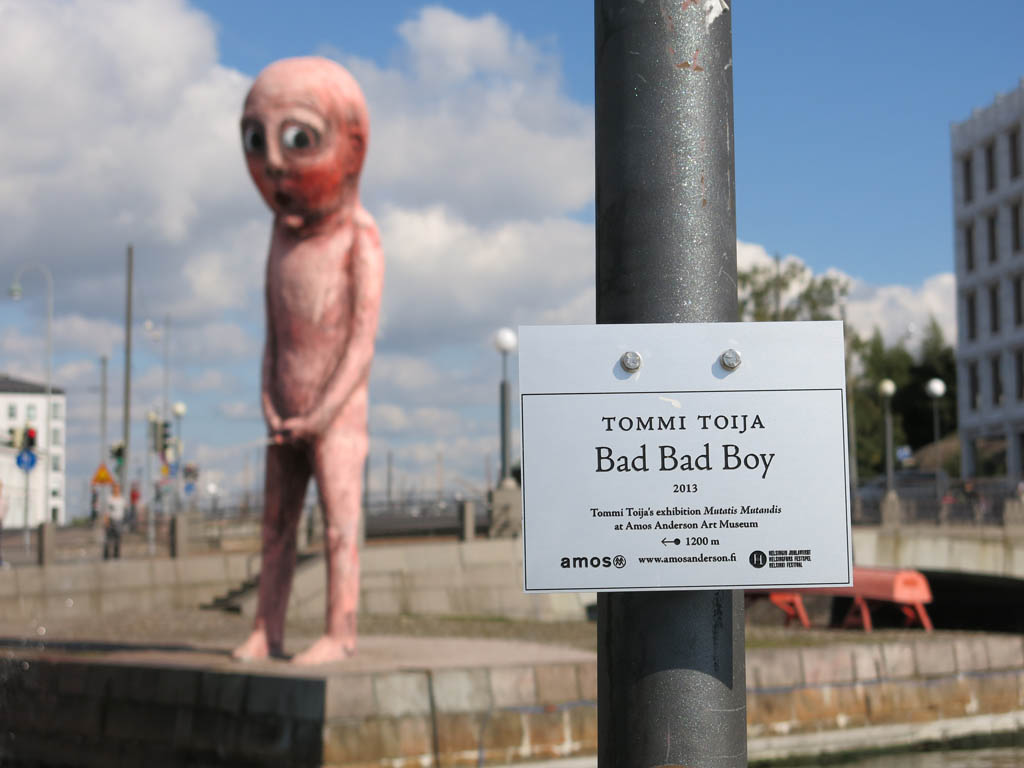 I’m not sure what’s up with Europeans, but they sure like their peeing boy statues. I gotta admit though, this was pretty funny. All the kids seemed to love it. 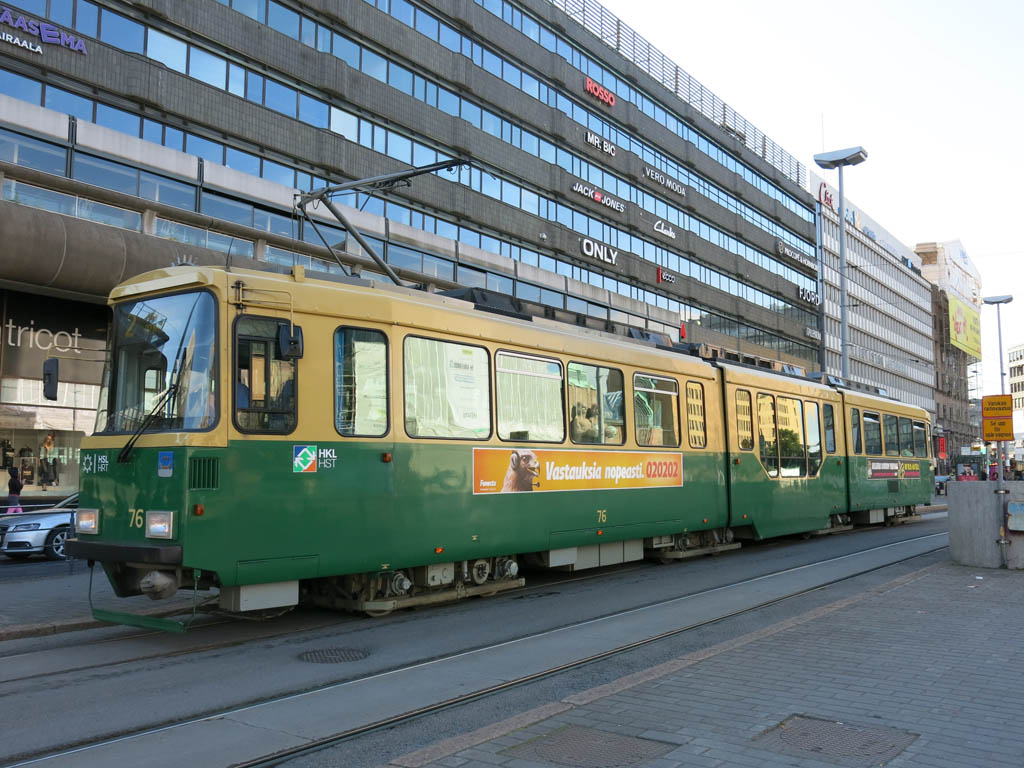 what city am i in?

By this time I was forming some initial impressions of Helsinki. It is an odd one in many respects. In some regards it is a very European city, with lots of cafes and people out enjoying the sun. But then it is also a bit sleepy. Even though it was a Sunday, I expected a bit more to be happening, but instead it was a bit quiet, with many shops outside the immediate centre closed, and the amount of people wandering not particularly huge. It did have a Melbourne feel though, with the seeming cafe culture as well as the strong focus on design and art culture. Also the amount of hipsters I saw might have added to that. As well as the very Melbourne colour scheme of the trams. Surely that can’t be a coincidence!

It was later in the afternoon by this time, and I was debating about what to do. It was a bit late to jump on a ferry to another island, so I just wandered some more and on my travels came across a movie theatre, which was just what my tired legs thought was a good find. They actually had a move I was keen to see playing in not too much time, Sin City 2, so I decided to just relax for a couple of hours and take in a film. Sadly, the film was OK if nothing great, but that was alright, as after a couple of days of a lot of exploring and walking, I was happy to chill out for a bit. 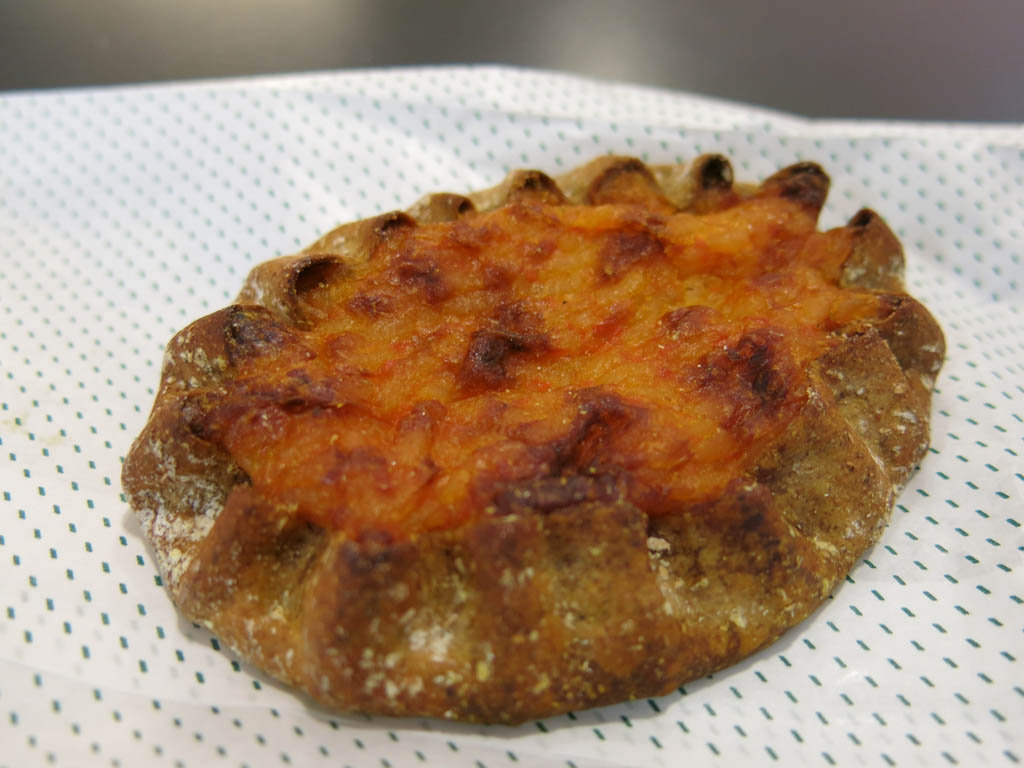 When that was done it was getting late in the day so time to jump on a bus back to the university. I wandered by Stockmann on my way to the bus station, which is a large department store. These stores are always good for food halls and this was no exception. not being too hungry I just got some bakery goods, one of which are these yummy Finnish pastry/pie like things, that are a rye bread with a rice filling. Mmmm…. tasty.

And with that it was on to a bus and back to the apartment, which brings me to now! Time enough to do a blog before bedtime and the working week. Probably won’t update for another week, but I am super excited for the coming weekend as I should have a visitor! Woo!