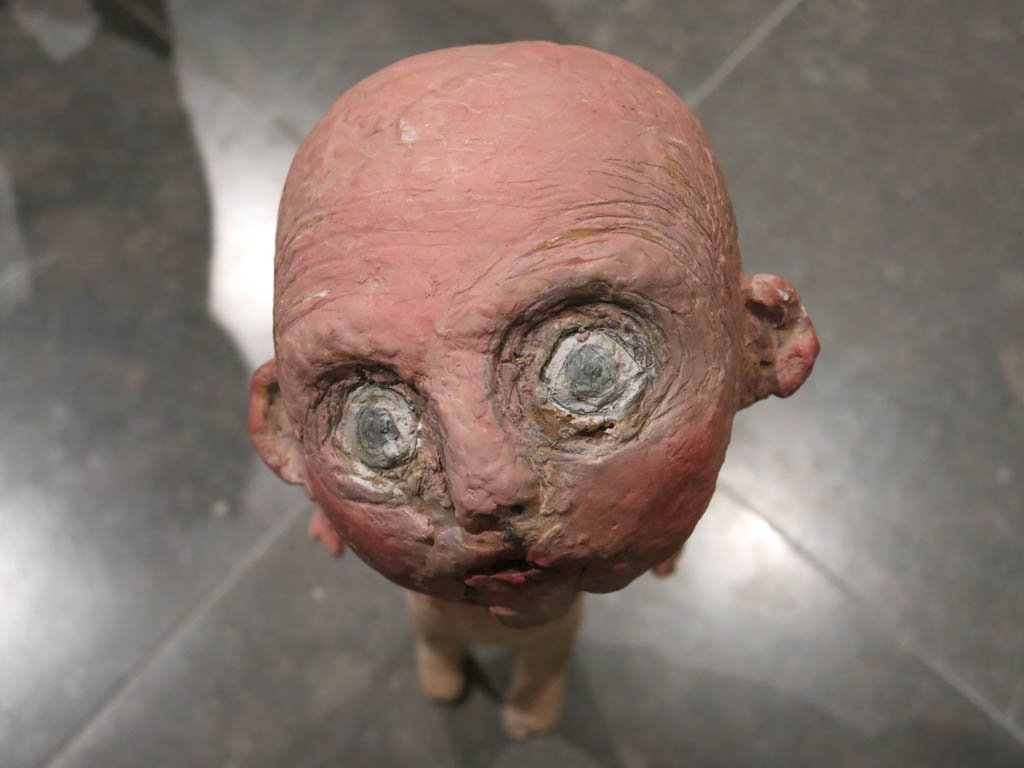 Welcome to week 3 here in Finland!

It has been another productive week researching. I have made some good headway into some projects and in particular my work with my colleagues here at Aalto is coming together. So all in all I’m being super productive!

Anyway, you’re not interested in work. What have I been up to?

When I arrived I looked into the local football schedule to see if getting to see some Finnish Premier League was an option. As it turned out I had a couple of options actually… the try and see the main Helsinki team (who are the dominant force in Finnish football), or to support my temporary home, and see Espoo’s team, FC Honka. As it turned out, I had a chance to see Honka at the local stadium mid-week, so I was now an official FC Honka supporter.

As it turns out FC Honka (honka being Finnish for “pine) are struggling this year and trying to avoid relegation, so I felt good going to support them. I wasn’t sure exactly how the football support would be here, although I expected a good crowd given it is the main sport here. When I got to the “stadium” (see how it is in quote marks now), I was a little surprised. What I found was a local football pitch with a couple of small stands, to hold a few thousand people. I felt I was back seeing the Morwell Falcons! 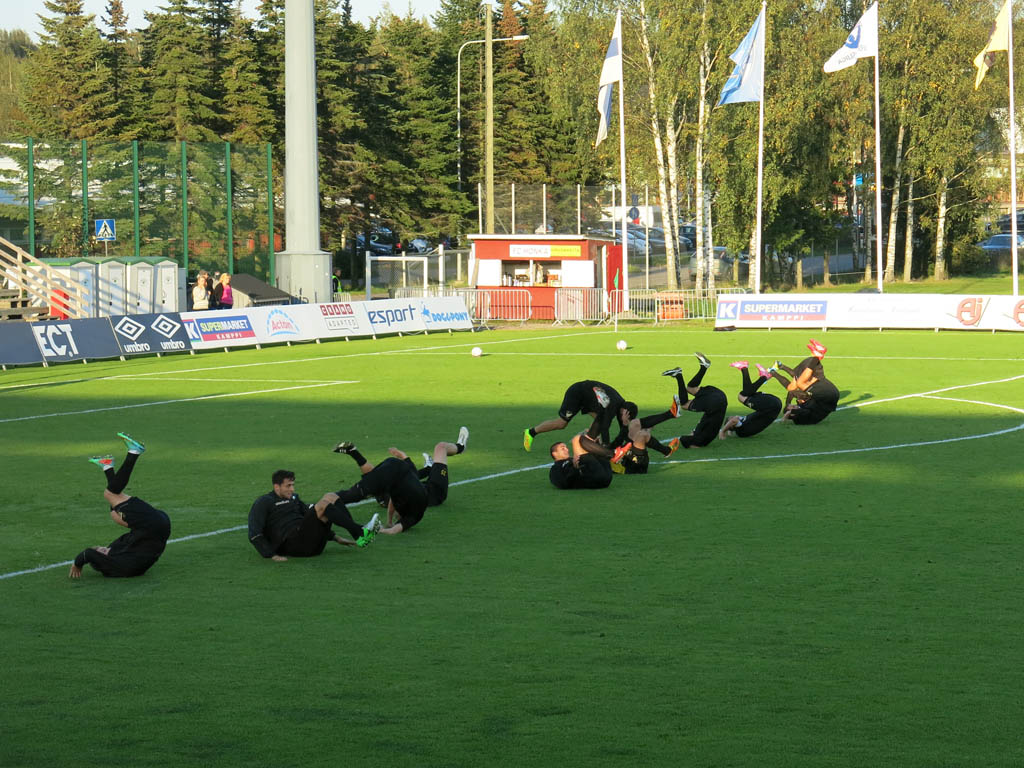 I arrived about 20 minutes before the game and all was quiet. I got to watch my newly adopted team go through their warm up. Seems they have some interesting warm up exercises here. 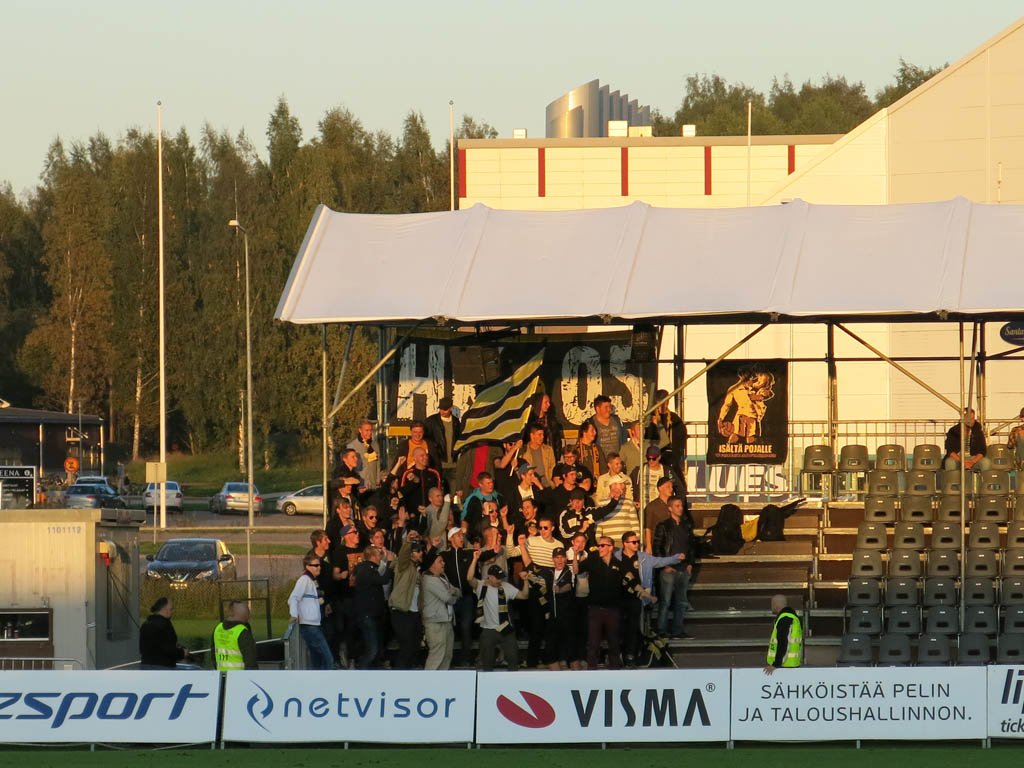 I was worried it was going to be a tiny crowd, but by kick off one stand was pretty full, while the other (to be fair looking directly into the sun) had a smattering of people. It also housed the FC Honka die hard supporters (all 50 of them) and they were in fine voice throughout the whole game. They were super passionate which was great. it also seemed as though football songs transcend global barriers, as although I couldn’t understand them, the tunes were very familiar. 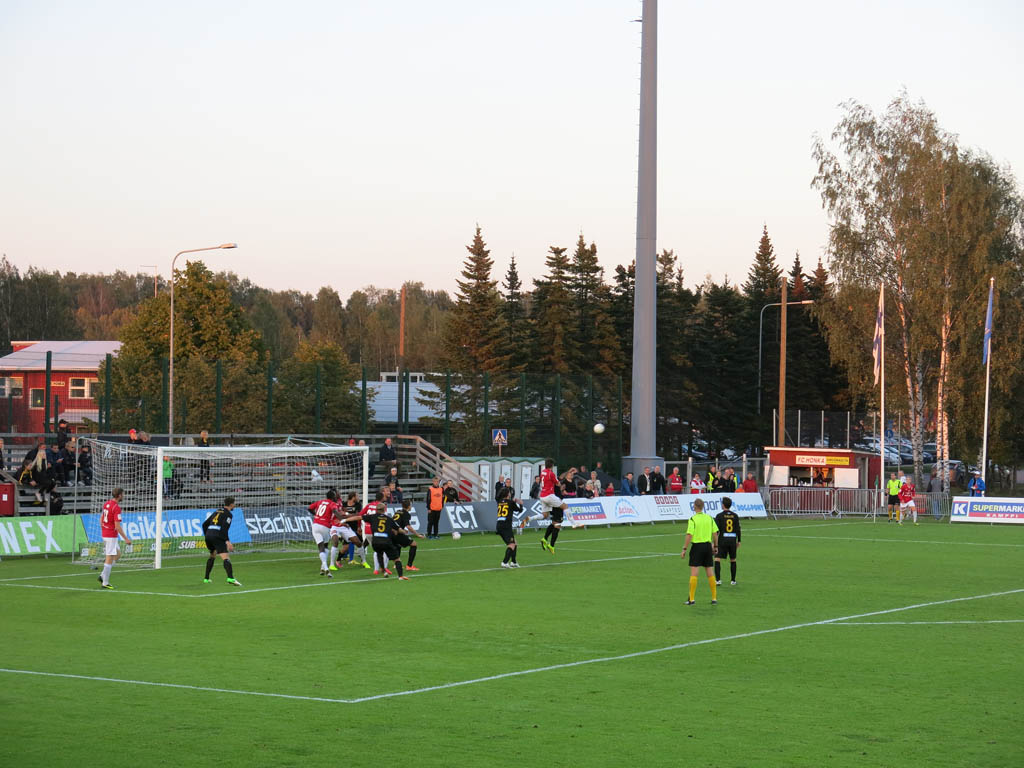 So how was the quality of the game? It was so-so. I think most A-League teams would do pretty well against both teams (Honka were up against another mid-table team in MYPA). Well except for Sydney FC he he he. I guess it also explained why the Helsinki team is the one making it into the Champions League pretty much every year. 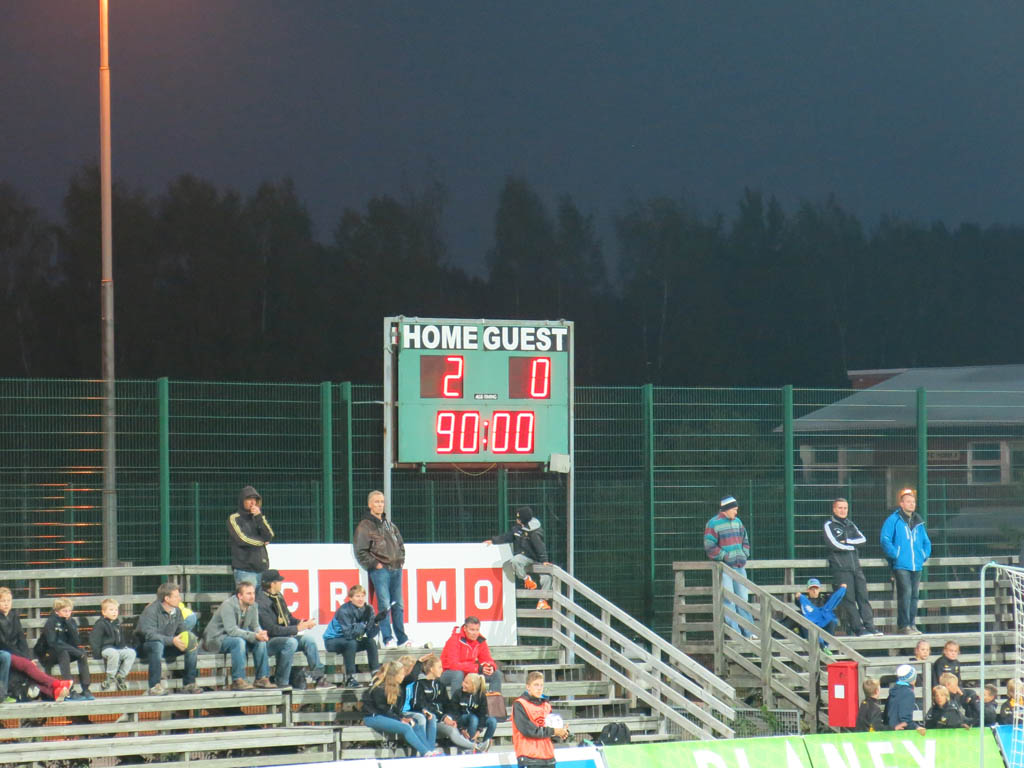 But it was an entertaining game nonetheless. In a must-win game, Honka got the job done, coming out 2-0 victors. The result didn’t seem in doubt at all after the first 5 minutes, with Honka controlling the game. Really they should have gone home winning by a couple more goals. But it got them off the bottom. I was very happy to have done my part 🙂

The rest of the week was pretty quiet. With no James to keep me entertained on the weekend, my work colleagues stepped up which was nice.

Saturday was another day in Helsinki, but this time I was meeting up with my main research colleague Paivi, who was going to take me to the modern art museum and for some lunch. I was up fairly early, so rather than bus it in to the city I decided to walk the lazy 9km in. What?!? Well, 9km is not that far, and much of the walk was quite nice, hopping across islands to get to the city centre. In fact the walk took no time at all and it felt great to stretch the legs out.

I met Paivi and we visited the Amos Anderson museum, which is the main modern art gallery in Helsinki. Paivi knew of an interesting exhibition at the gallery, work by Finnish artist Tommi Toija that seemed pretty interesting. 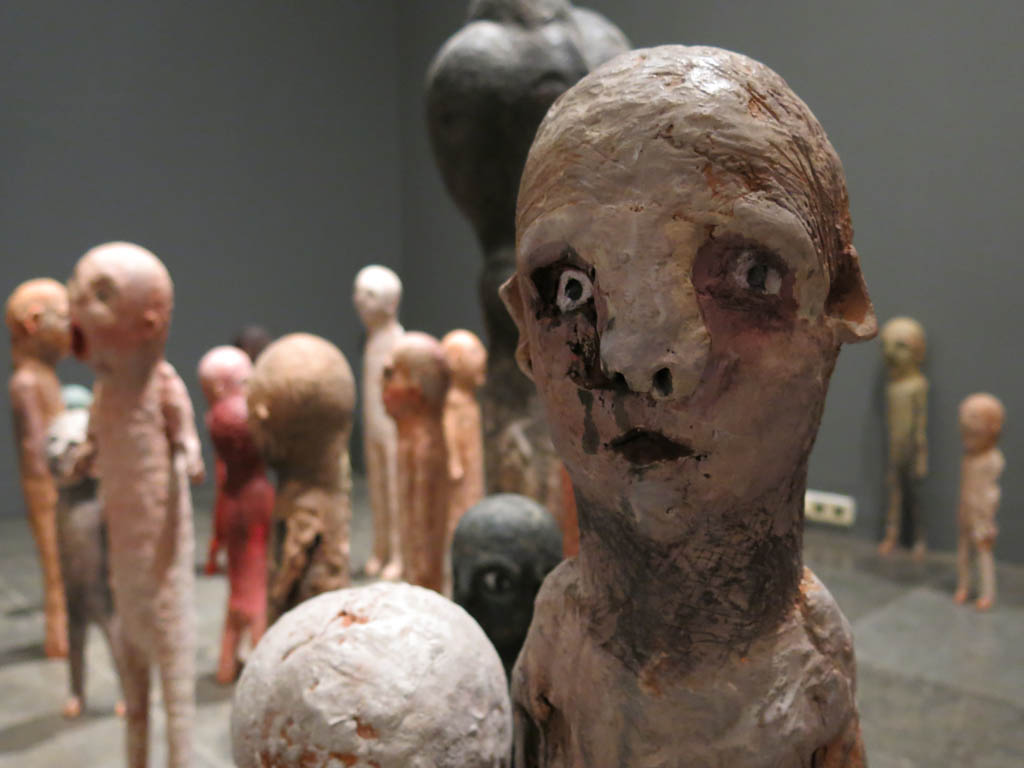 When we went in, his work looked instantly familiar… he was the artist behind the huge peeing boy at the main harbour. It looked familiar because the exhibition consisted mainly of dozens of smaller statues of figures much in the same vein as the one on the harbour. But even creepier if that was possible. 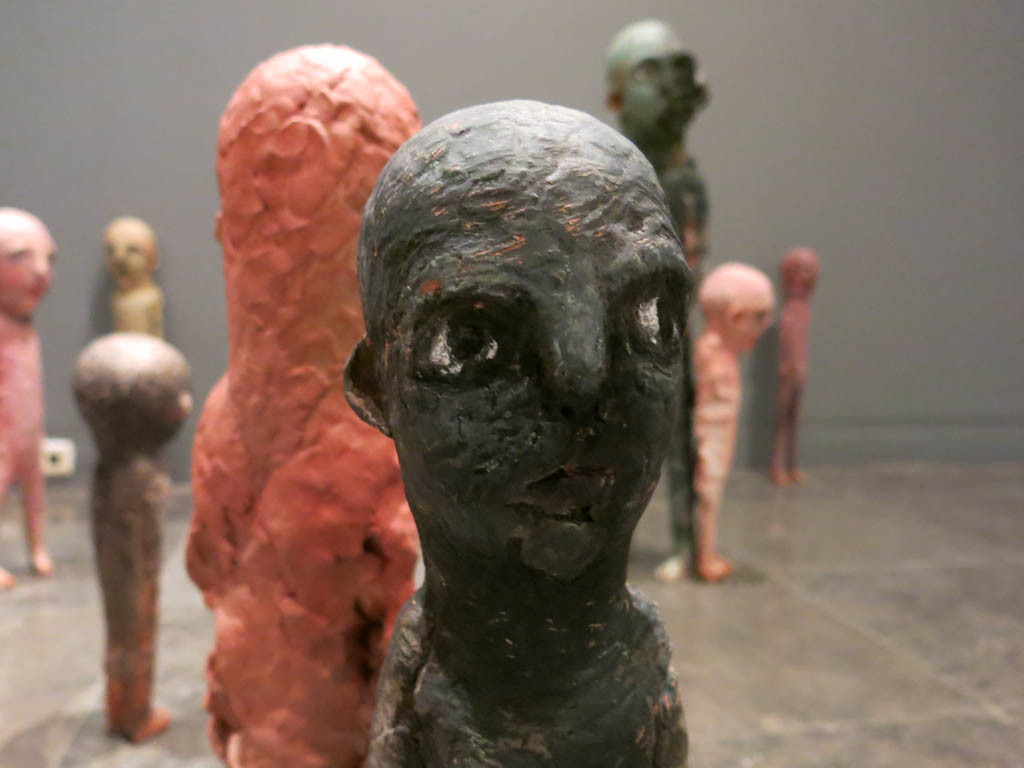 not looking too impressed

But I gotta say they were fascinating. We could walk amongst them and get nice and close. Most looked either sad or scared as they congregated in the exhibition space. It was fun to examine them all, finding the ones that stood out because of some funny look on their face. 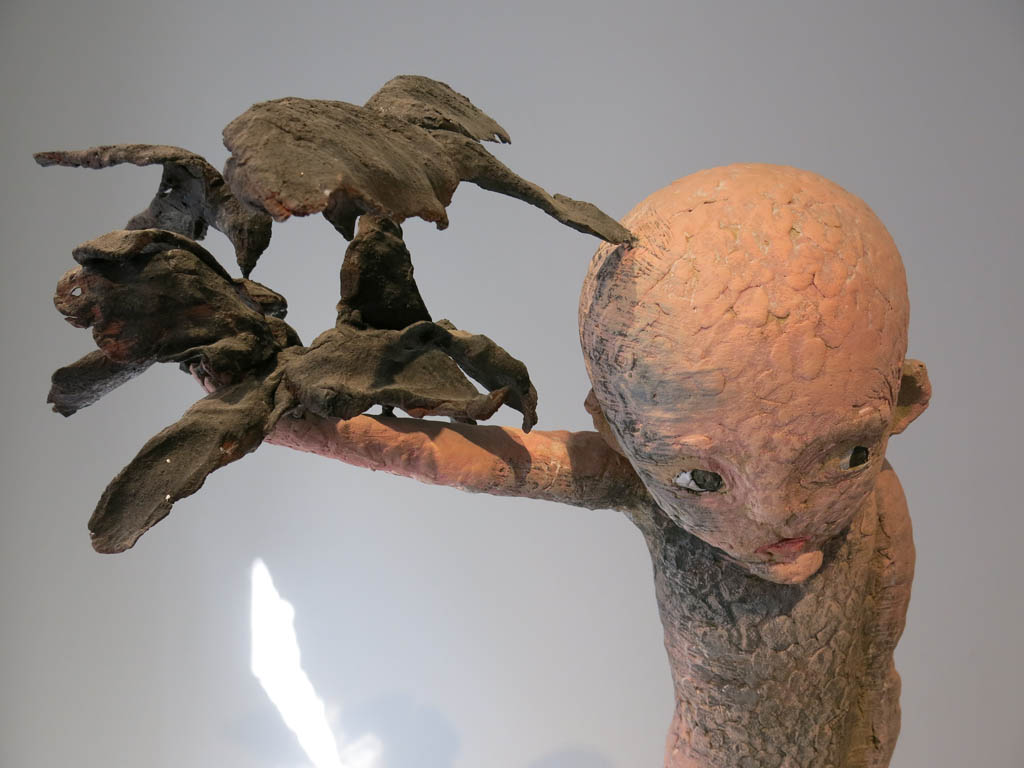 this guy had a bit of a bird problem

There was also another room of smaller figures that were displayed on their own pedestals. Most were too small to be part of the larger group, and only one seemed to have a bit more going on, one clearly inspired by Hitchcock.

We also explored the rest of the museum, which was actually quite a good collection. It was predominantly the private collection of Amos Anderson, who asked that his house (that we were in) be turned into a museum on his passing. The top floor were rooms left as they originally were, including a chapel with some odd religious art and a mini pipe organ. Sadly pictures weren’t allowed in the rest of the gallery.

A couple of hours zipped by, so it was time for a coffee and cake. We went to a nearby cafe where I had my first great coffee in a while. Given the Finns drink so much coffee, finding a great one had proven a bit difficult. But I got to savour a pretty decent latte.

It was then time to bit adieu to Paivi, and I spent the rest of the afternoon wandering and exploring some shops, even finding a good record store. I decided not to walk back the apartment, rather jumped on the bus and enjoying a quiet night.

Sunday I was graciously invited to my colleagues Lauri and Kertu’s house to join them for dinner, so I had the day to chill and relax. Rather than stay in the apartment all day, I decide to head to the Edvard Munch exhibition at the nearby Didrichsen Art Museum. 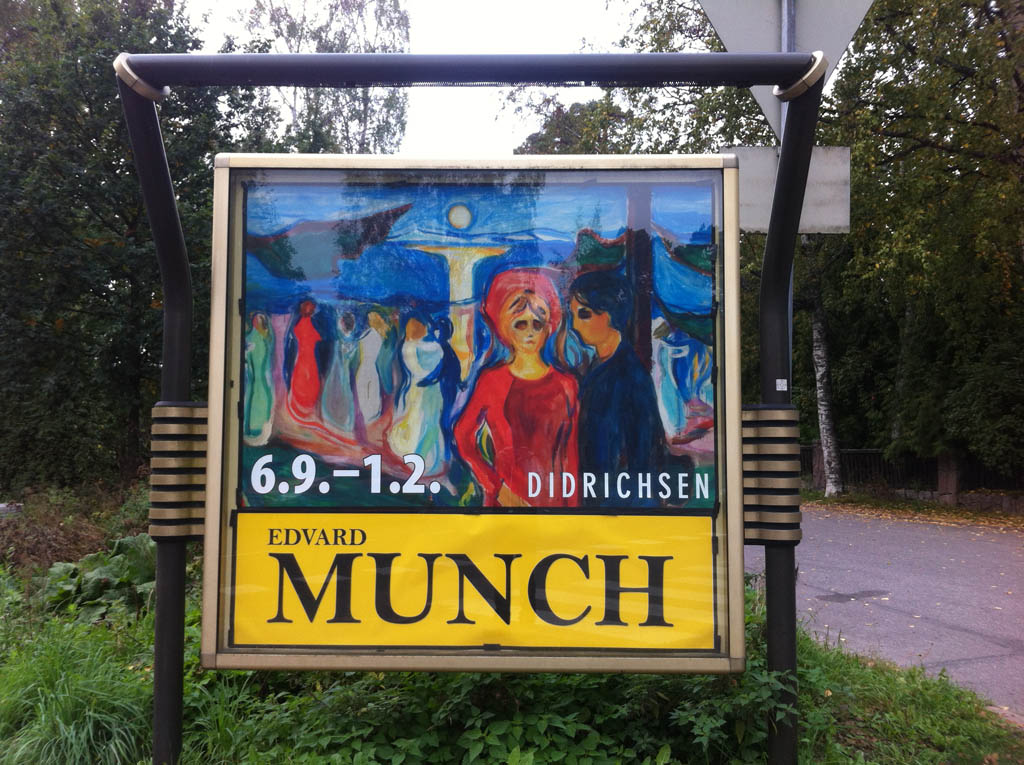 catching up with a visiting norwegian

The Didrichsen is a private gallery, normally filled with the private collection of Marie-Louise and Gunnar Didrichsen, however it has been closed for the past few months, and has reopened with a small exhibition dedicated to Edvard Munch.

Called “The Dance of Life” it was comprised of works from a number of galleries, including the Munch Museum in Oslo. After getting through some VERY strict security, I got to explore the work.

It was a very modest exhibition, made up of less known works. The centre piece was a large work entitled The Dance of Life, of which I had seen another version, either in Oslo or at the Munch exhibition that the NGV held in Melbourne a few years ago. Most importantly, they also had a version of one of my favourite Munch paintings (if not my favourite) controversially titled “Vampire”. Apparently he did 4 version of this, and this is at least the 2nd, if not the 3rd, different version I have now seen. It is quite a haunting work, and I say controversially titled Vampire, as Munch himself apparently titled it “Love and Pain” which is exactly what I see when I look at it, not a vampire at all. But to each their own. 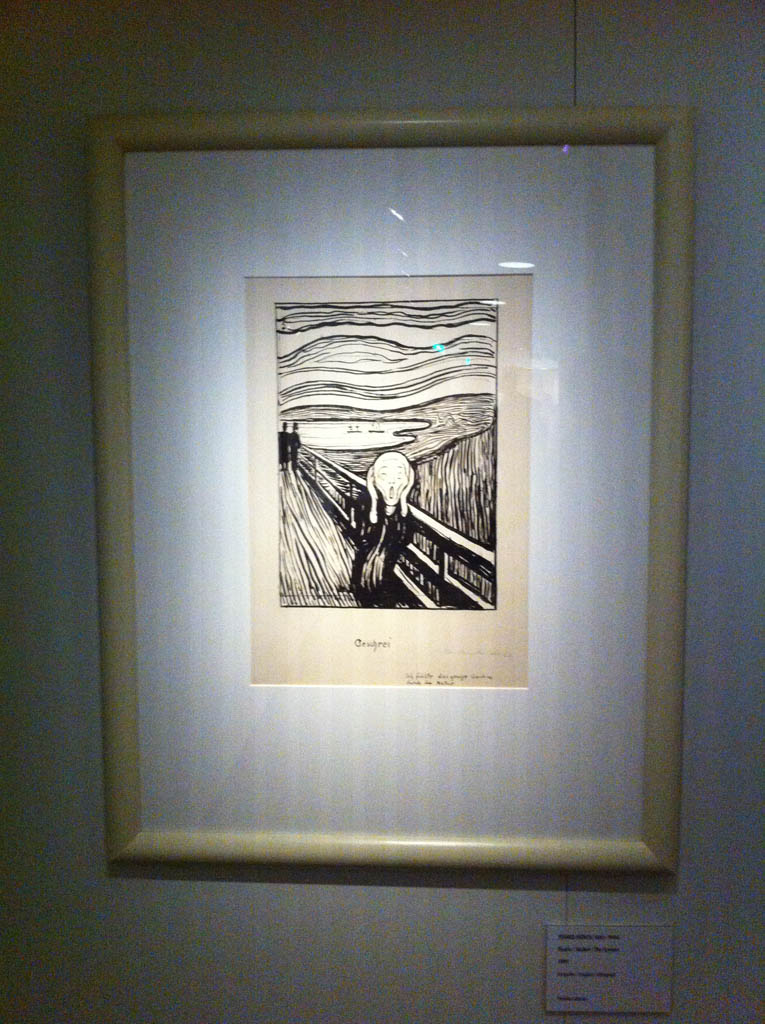 a print of the one everyone knows

With upstairs consisting of about 25 paintings, downstairs was mostly lithographs and other prints. They seemed to be less worried about people taking photos downstairs so I snuck a couple, one of the obligatory Scream, and another of a print of another of my favourite Munch paintings, “Madonna”. 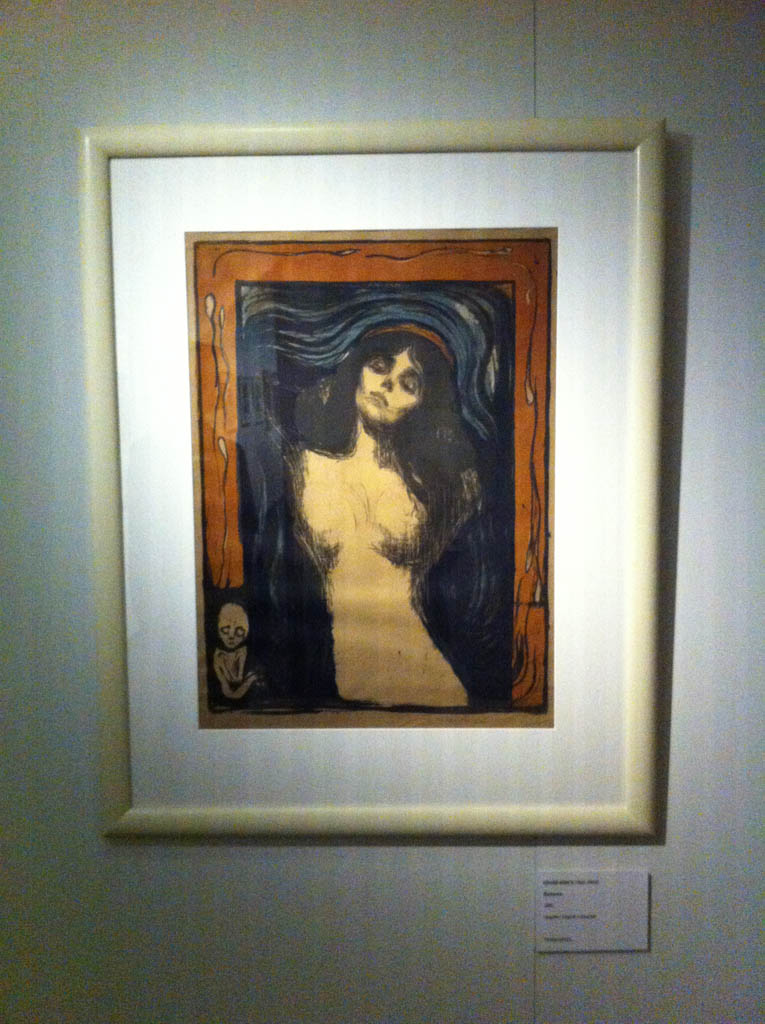 In no time I was through the exhibition. Small, but worth a visit on a cloudy Sunday morning. 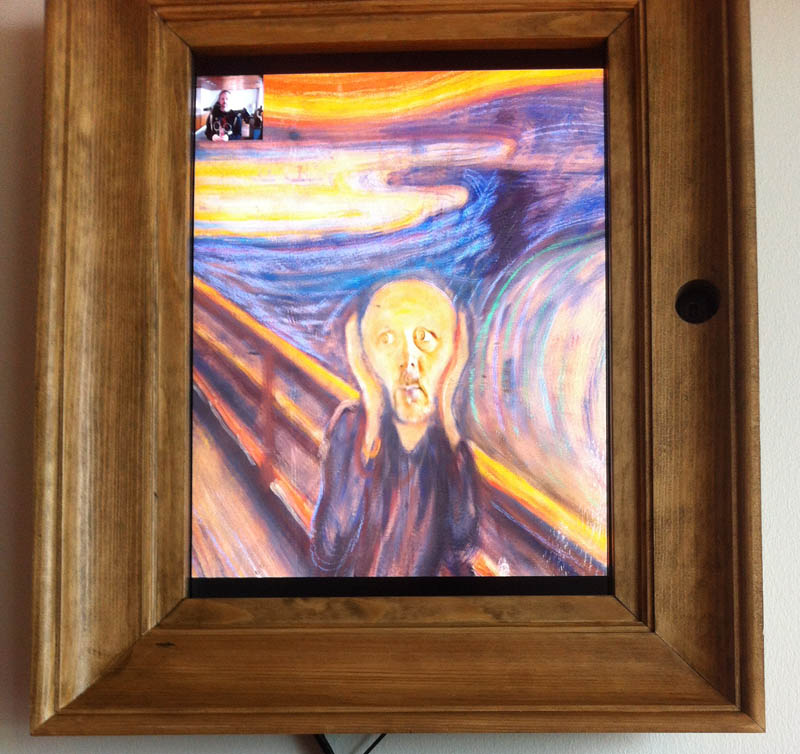 the creepiest thing in this whole creepy blog post

There was little else to see in the gallery. There was a cool/dodgy, “morph your face into the Scream” type installation that only seemed to half work. But just in case you ever wondered, I guess this is what I would look like. Freaky huh?

The rest of Sunday proved quiet, with a bit more walking and relaxing, until it was time to visit Lauri and Kertu. As I expected, they were amazing hosts, treating me with a delicious dinner. It was nice to spend the Sunday evening, chilling out with them and enjoying the great Finnish hospitality.

Now, time for bed and my last week in Finland…