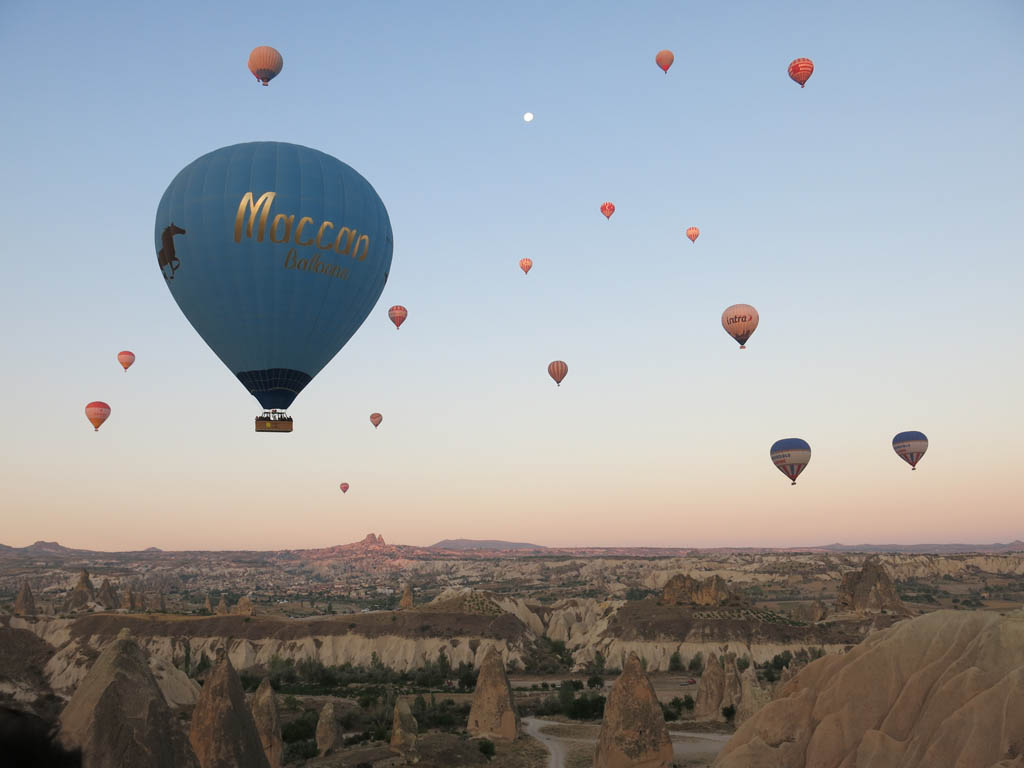 up up and away

4am. That’s a bit early. Especially when you have been packing in stacks of things each day. But we had to get up nice and early this morning for the main thing that Kate wanted to do this entire trip… float high above the Cappadocian valleys in a hot air balloon. 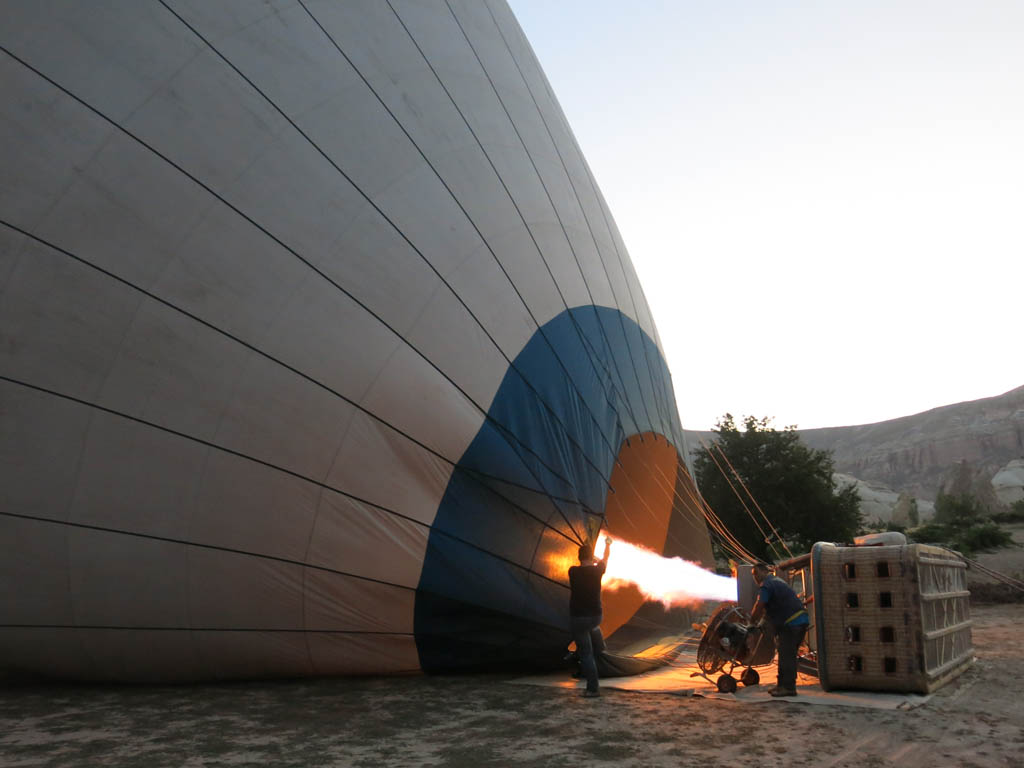 getting ready to board 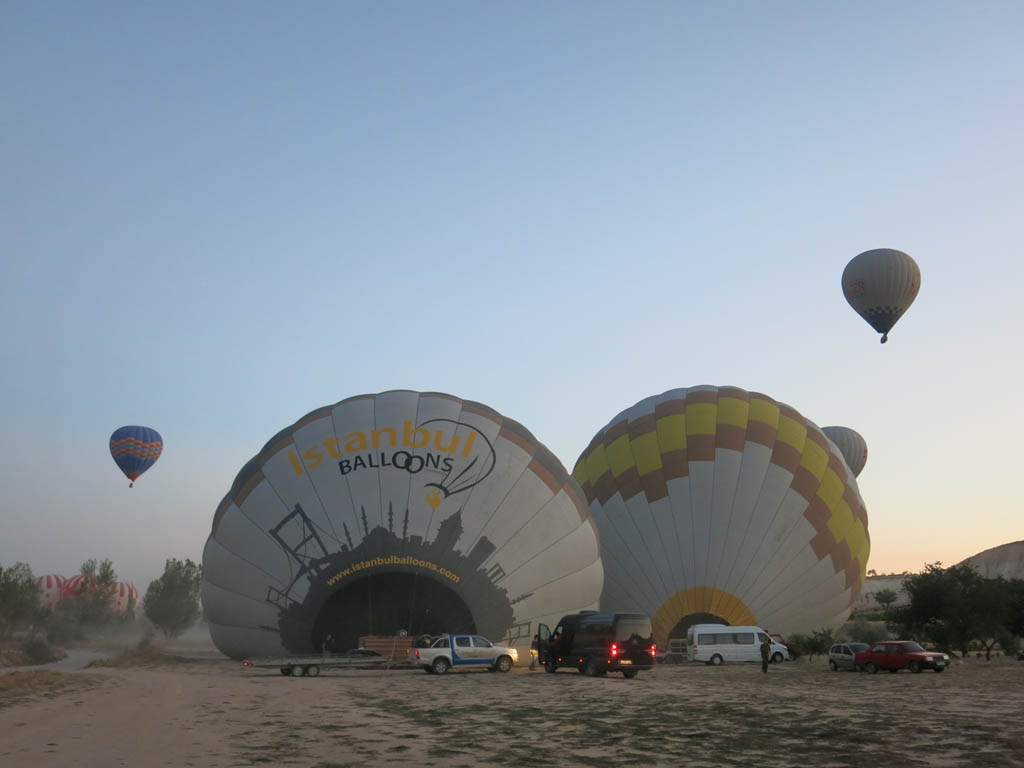 It seems hot air ballooning is the thing to do when visiting Cappadocia, as the many many balloons we saw when arriving attested. There were easily over a hundred balloons either ready to fly off or already in the air. And as the sun was coming up, our balloon was being filled with hot air and getting ready for lift off. 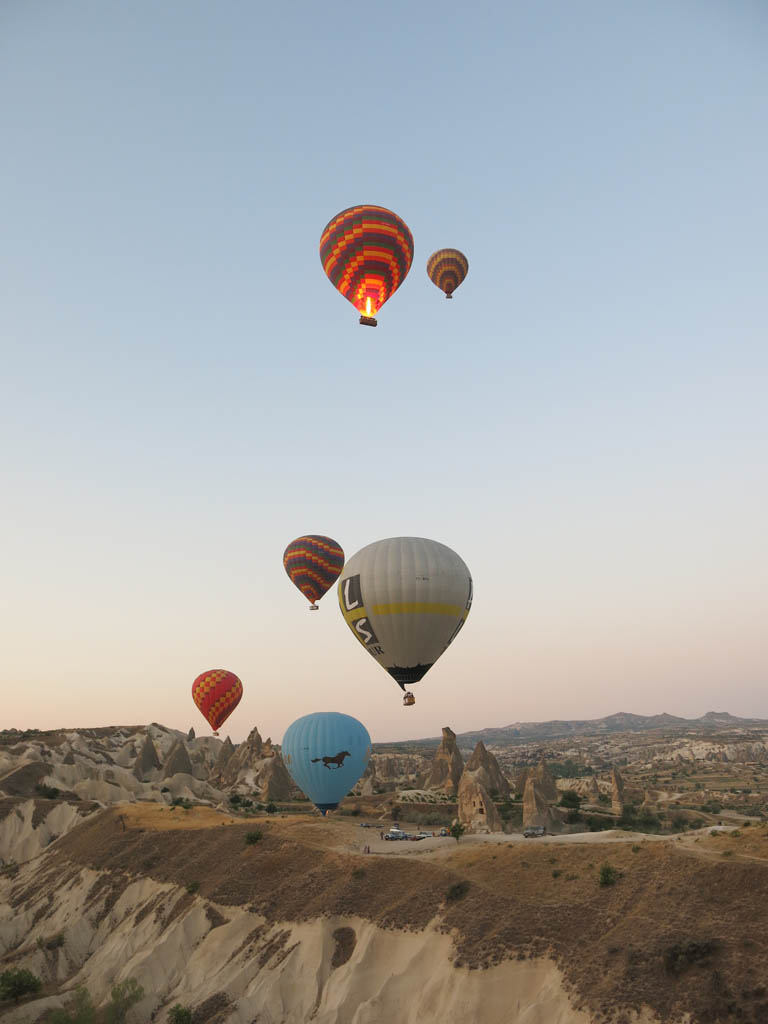 What followed was an incredible hour floating over Cappadocia. Not only was the sight of the valley, mountain houses and volcanoes breath taking, but having over 100 balloons flying around you just added to the experience. 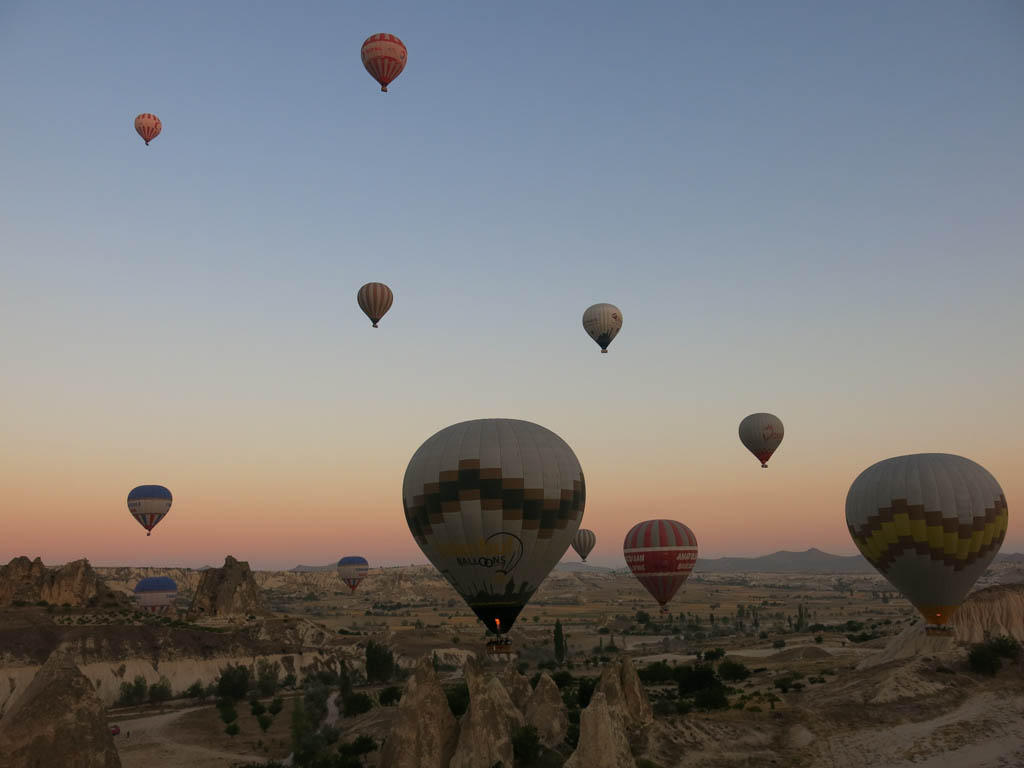 It was my first hot air ballooon, and it was much smoother and gentler than I thought. I expected it to be gentle, but it hardly felt as if we were moving, even when ascending fairly rapidly. Our pilot even did a bit of fancy flying, coming close to some of the rock formations (and other balloons). 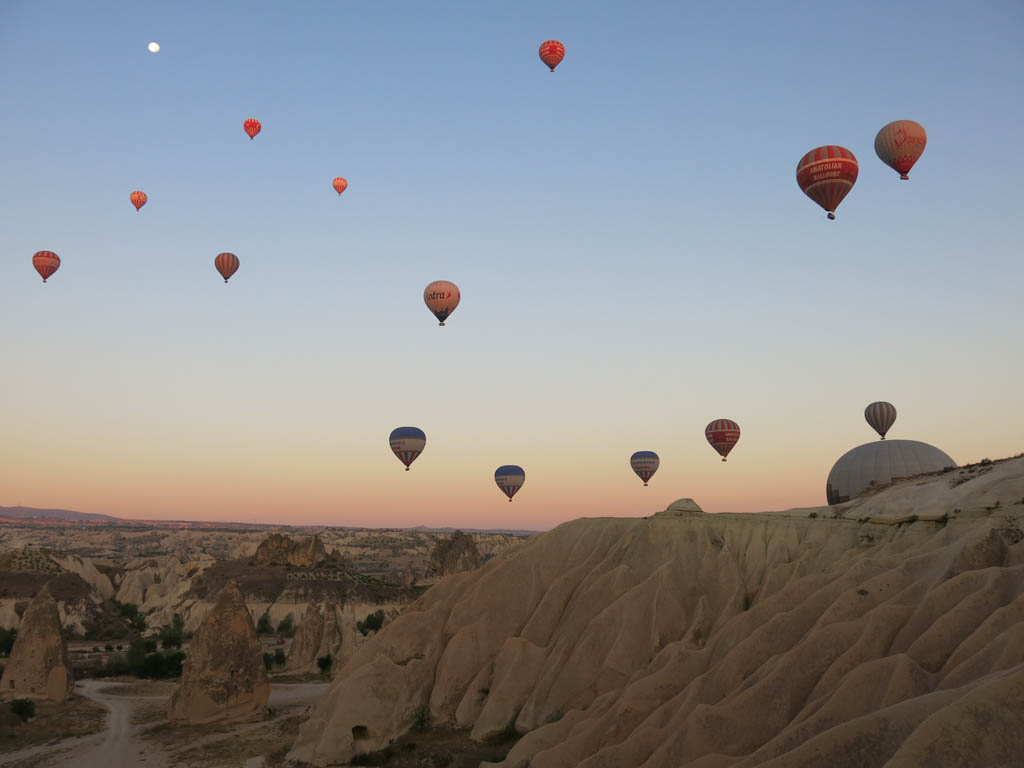 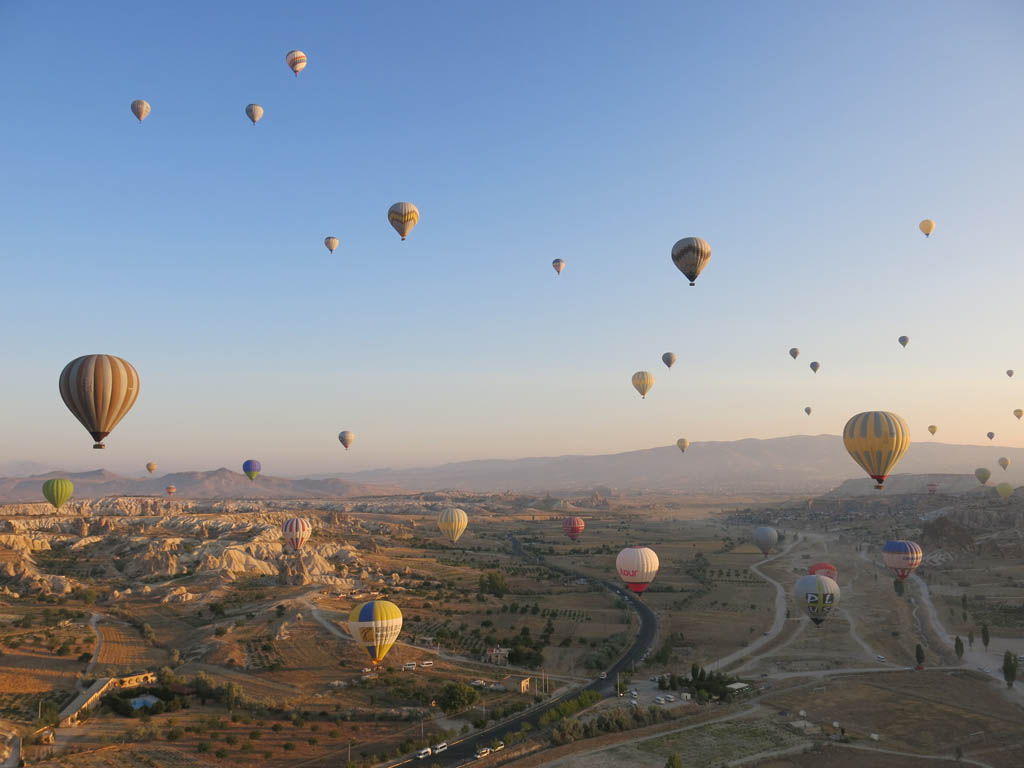 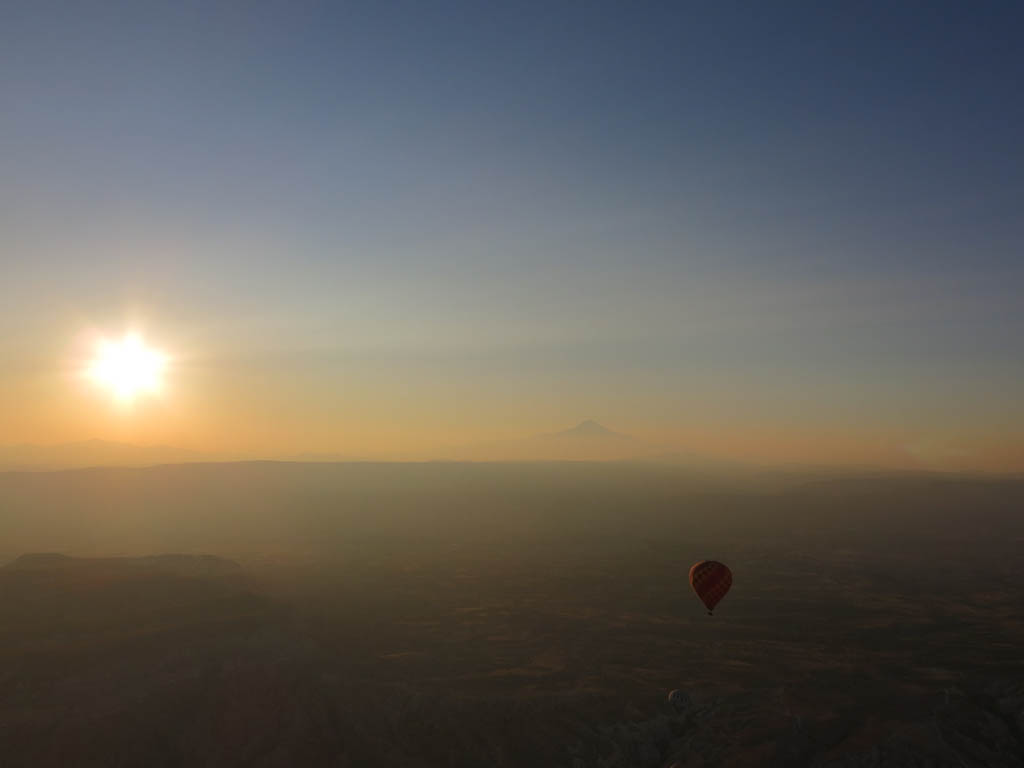 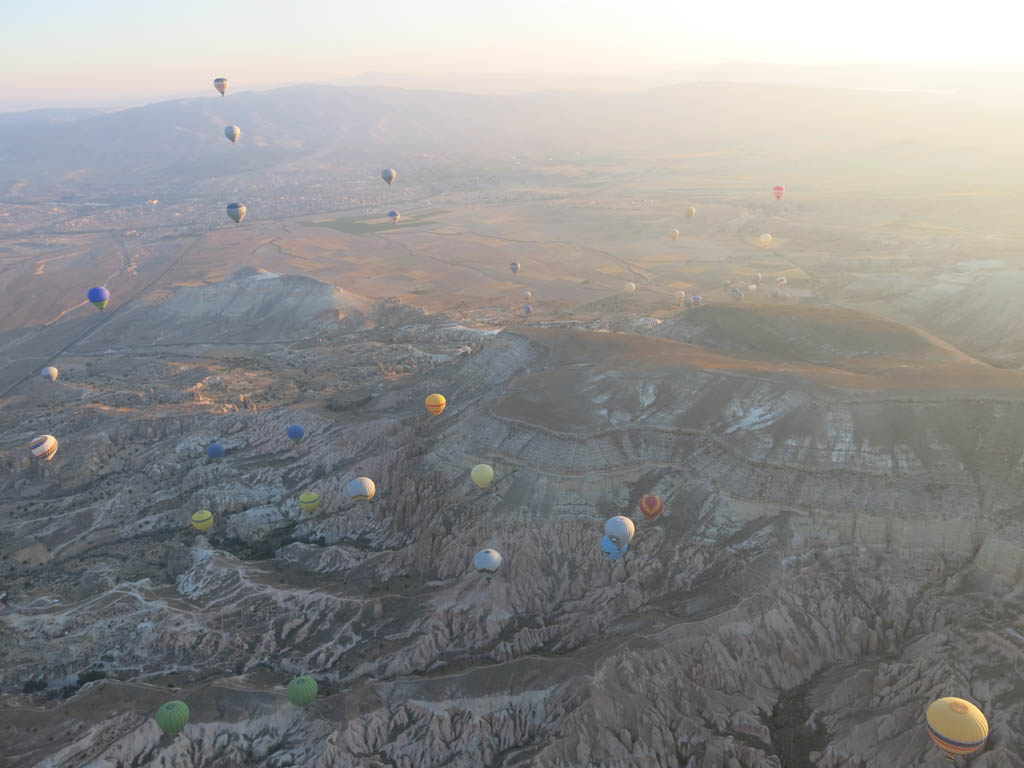 There is not much else to say really. I took A LOT of photos, that obviously will never really capture it all. But here is a bunch more anyway. 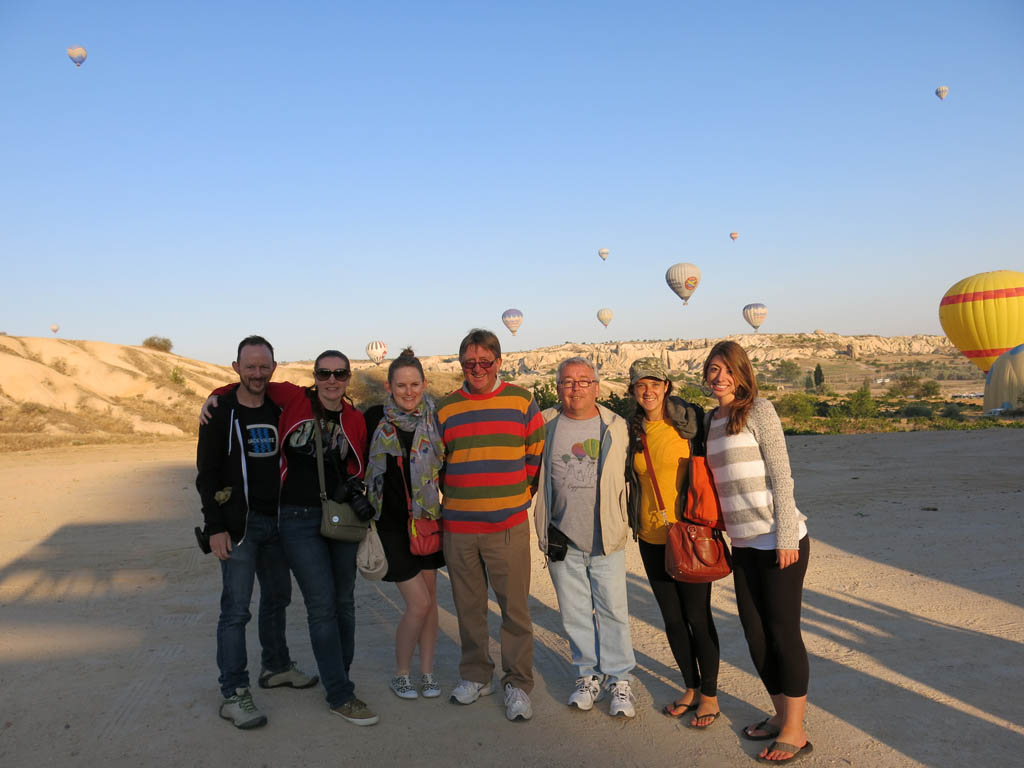 An hour flew by (ha ha) and next thing we knew we were back on solid ground. Minds blown by 7am. 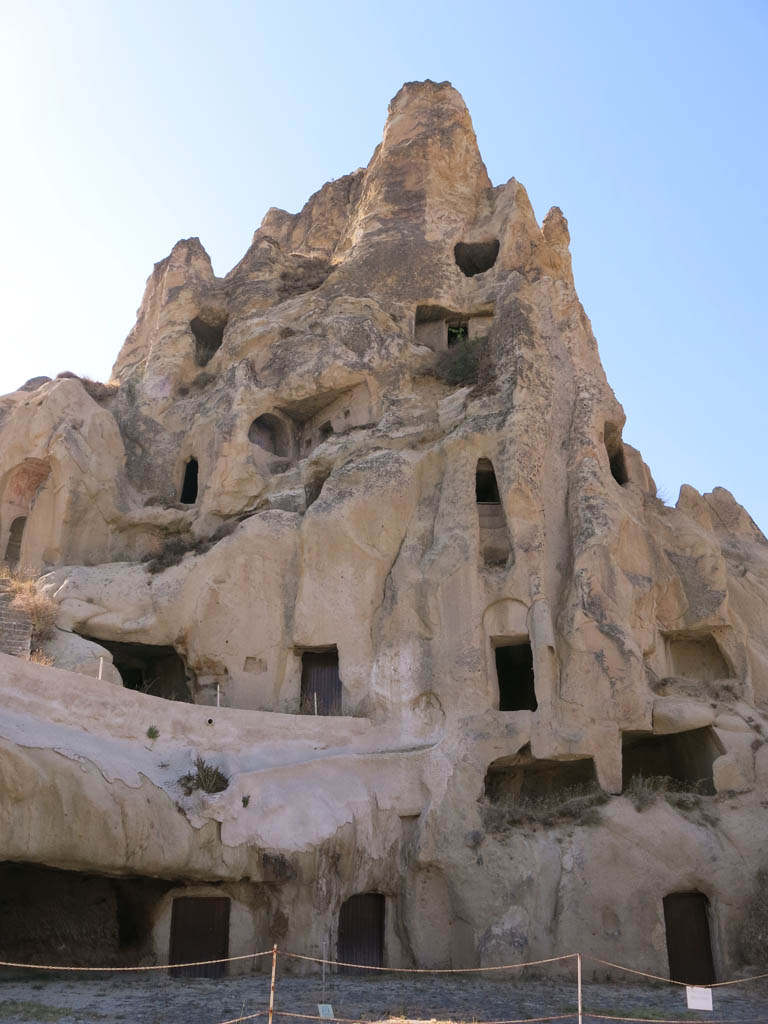 Back we went to the hotel for a couple of hours rest before heading out to explore Cappadocia some more. Next stop was the Goreme Open Air Museum. As I have already mentioned, this region is well known for the many houses and buildings inside the sides of the rock formations. The Open Air Museum focuses on the church buildings that were made 1000 years ago. So we spent the next hour or so exploring them

They were a real mixed bag. Some were sparse, others ornately painted, one incredibly so. So it was fun to wander about for an hour, even if the crowds were a bit crazy (everyone must leave their balloon ride and come to the museum). 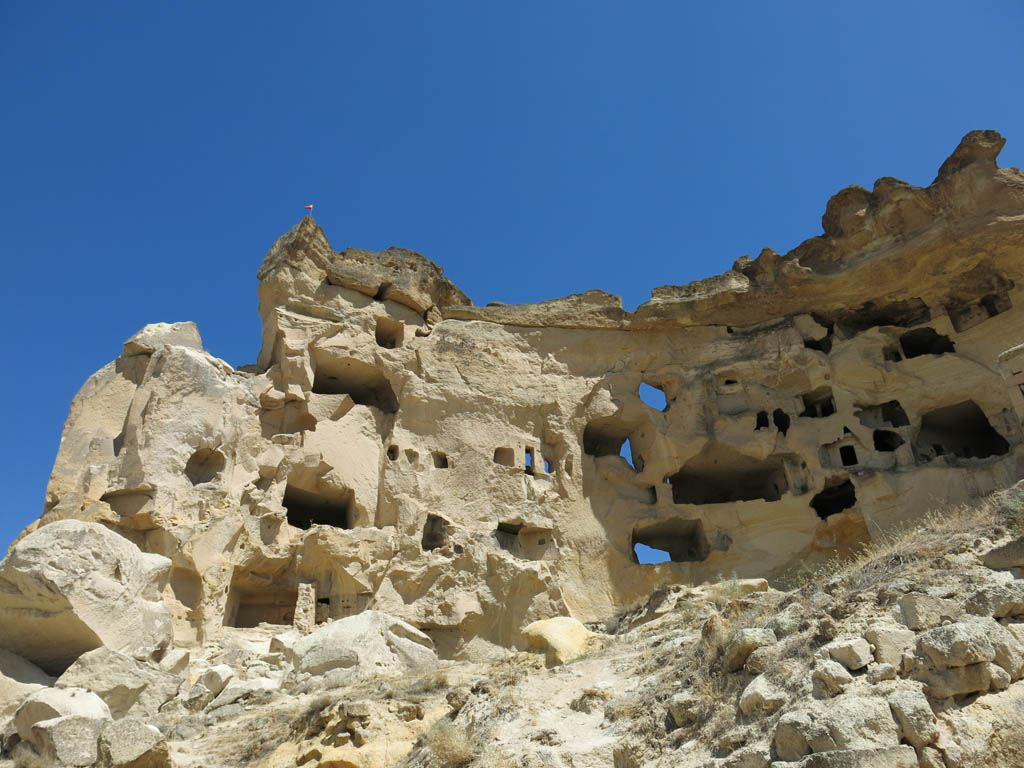 The rest of the afternoon was visiting some different spots around the local region. There were may great places to explore and climb, and we would drive around and jump out at different spots. This spot was another collection of stone houses we could freely climb. 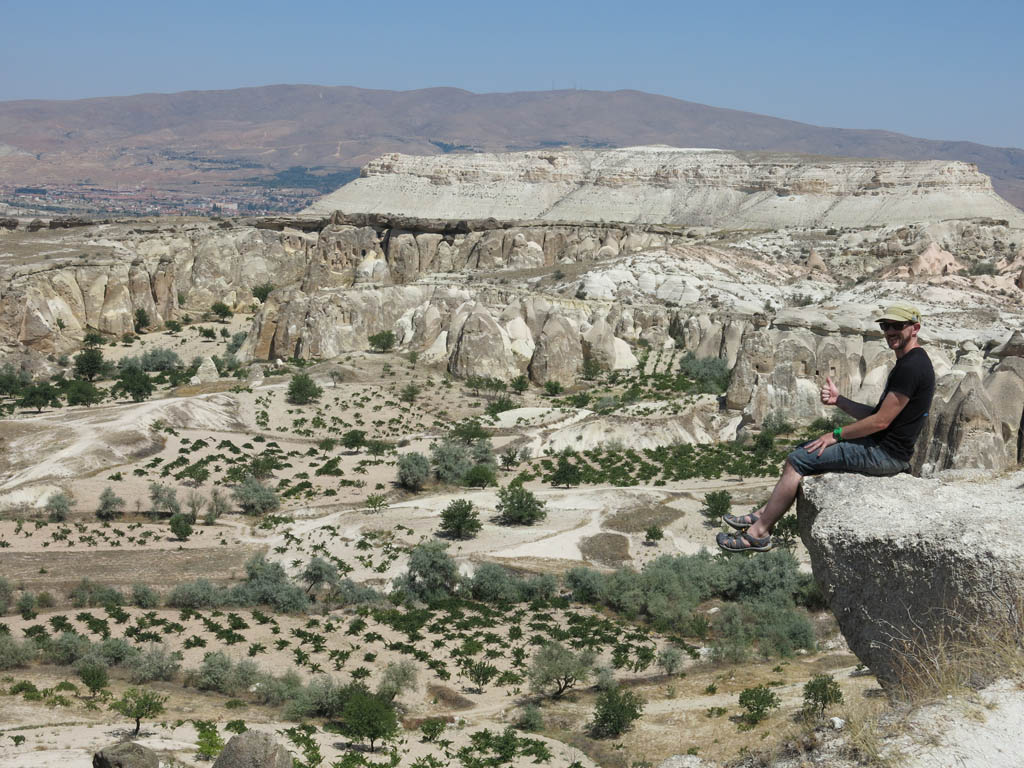 Tour mate Ryan and I got to the top of one and couldn’t resist snapping Grand Canyon-esque pictures. 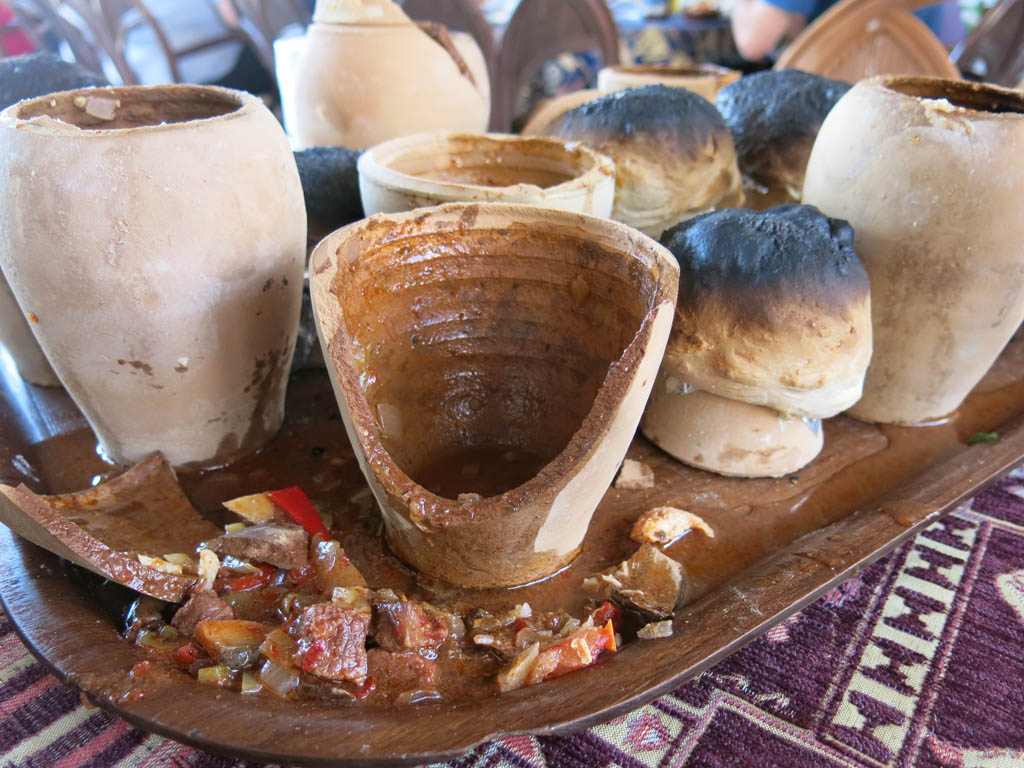 i didn’t know my own strength

It was then time for lunch! We visited a restaurant that specialised in claypot stew. Most of indulged in a multi-course lunch, filled with breads and mezzes and salads and beers. But the main thing was the claypot, which we each got to open up ourselves. Given everyone was having a little trouble opening theirs, I thought I would give it a bit more of a whack. A bit much it seemed, as the evidence above suggests. 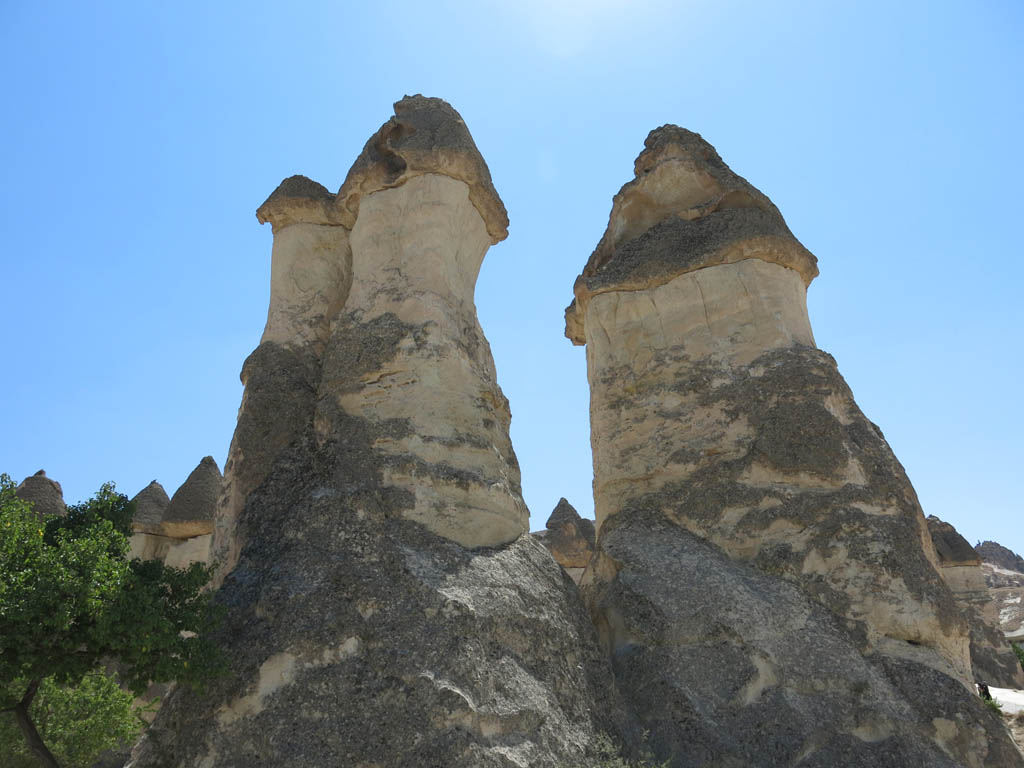 With a delicious lunch under our belt, it was some more valley exploring. Above is the Mushroom Valley, named for fairly obvious reasons. 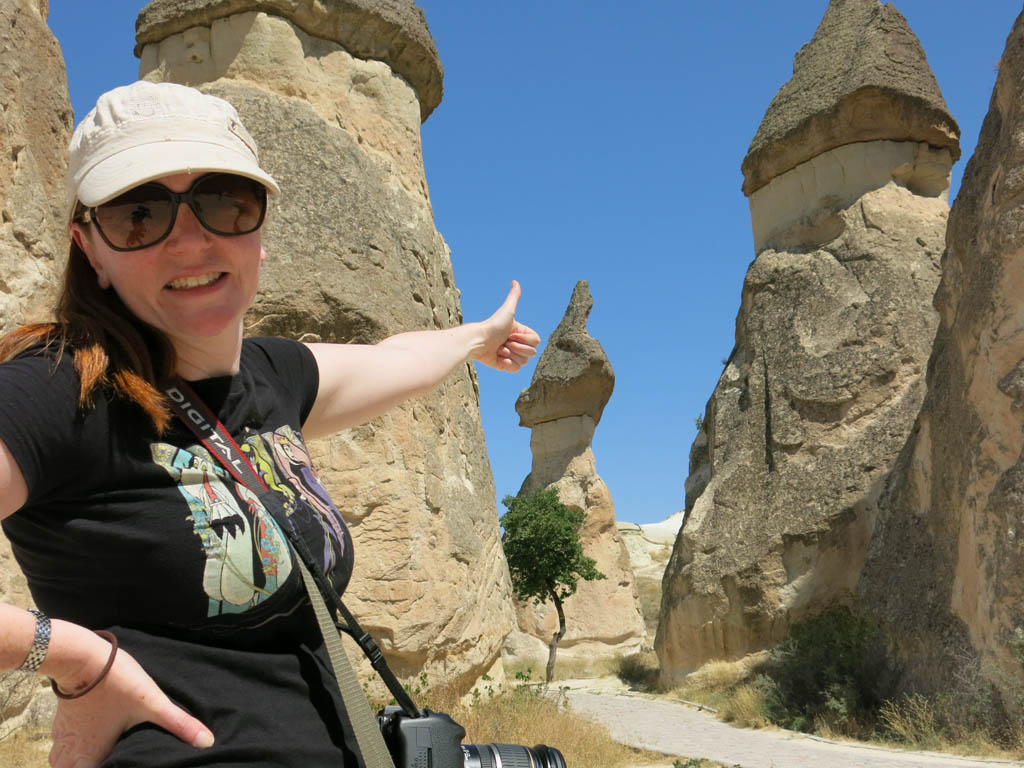 Kate also thought she had found the famous “Fonzie” monument. 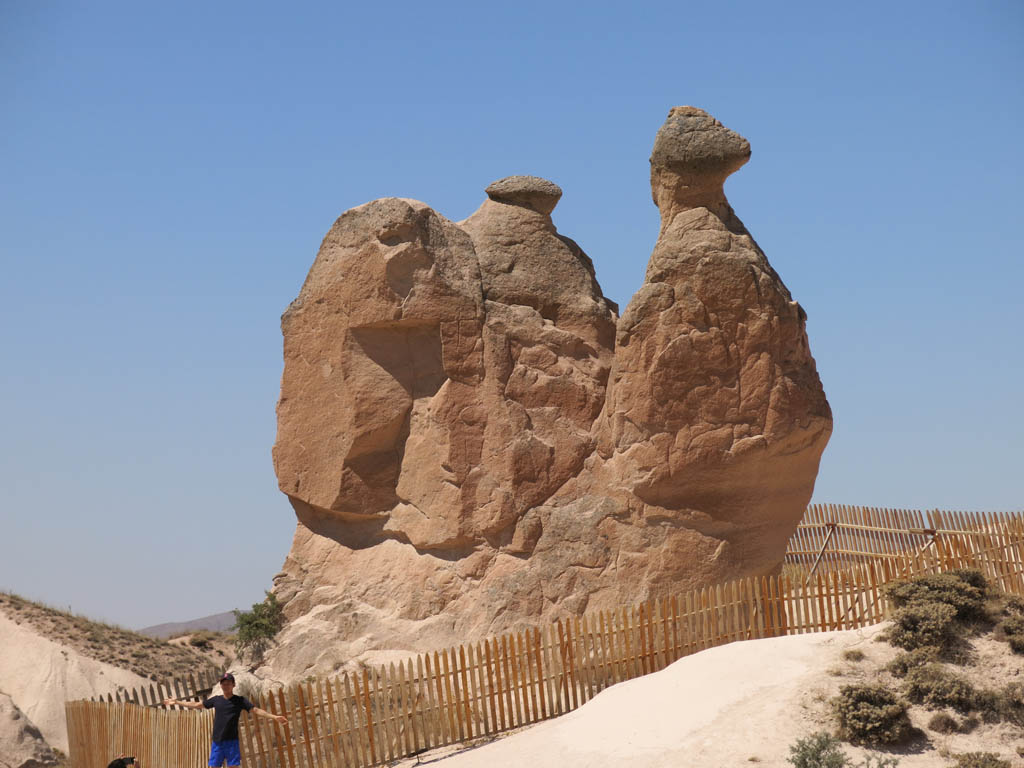 And we also came across the stone camel, the result of a legend that resulted in the camel being turned into stone. Hmm… not sure about that one.

The last stop for the day was to a local company specialising in carpet weaving. A common G Adventures thing is to visit local, traditional, businesses. And since Turkey is known for its rugs, this was a pretty impressive place to come. 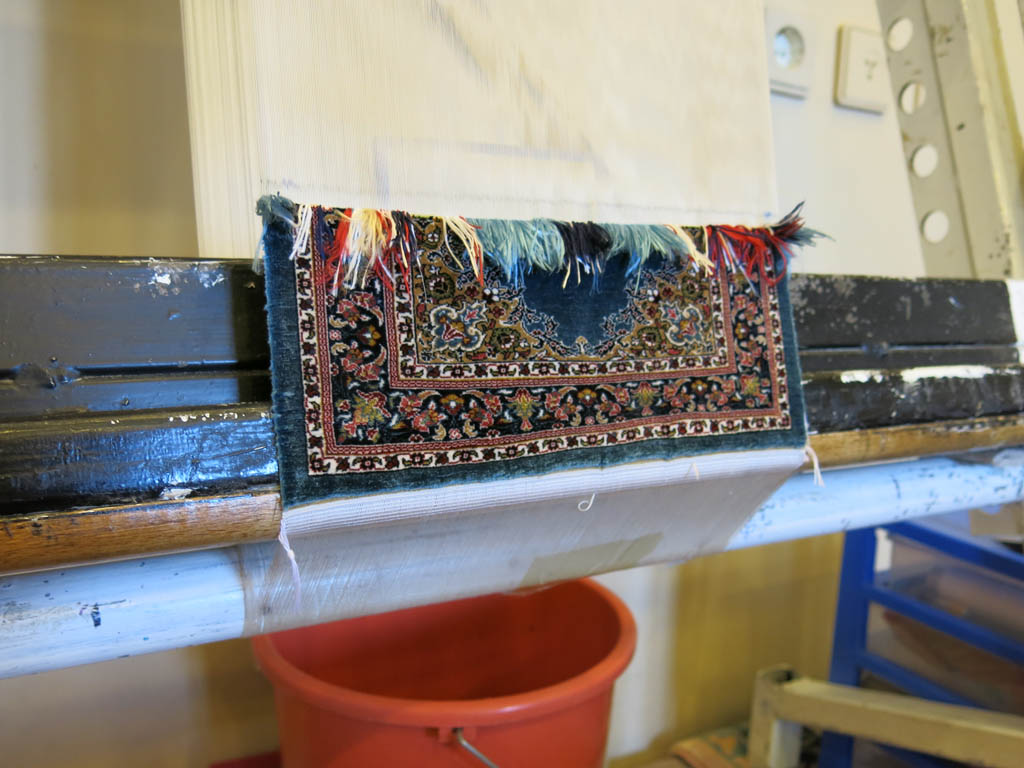 We got shown the fundamentals of rug making but the highlight was seeing the rugs. I laid eyes on a huge silk carpet that took 2+ years to make. It was one of the most amazing things my eyes had ever laid eyes on. Kate and I both wished we had a spare $50K (at least) to buy it. Oh well, maybe next time. 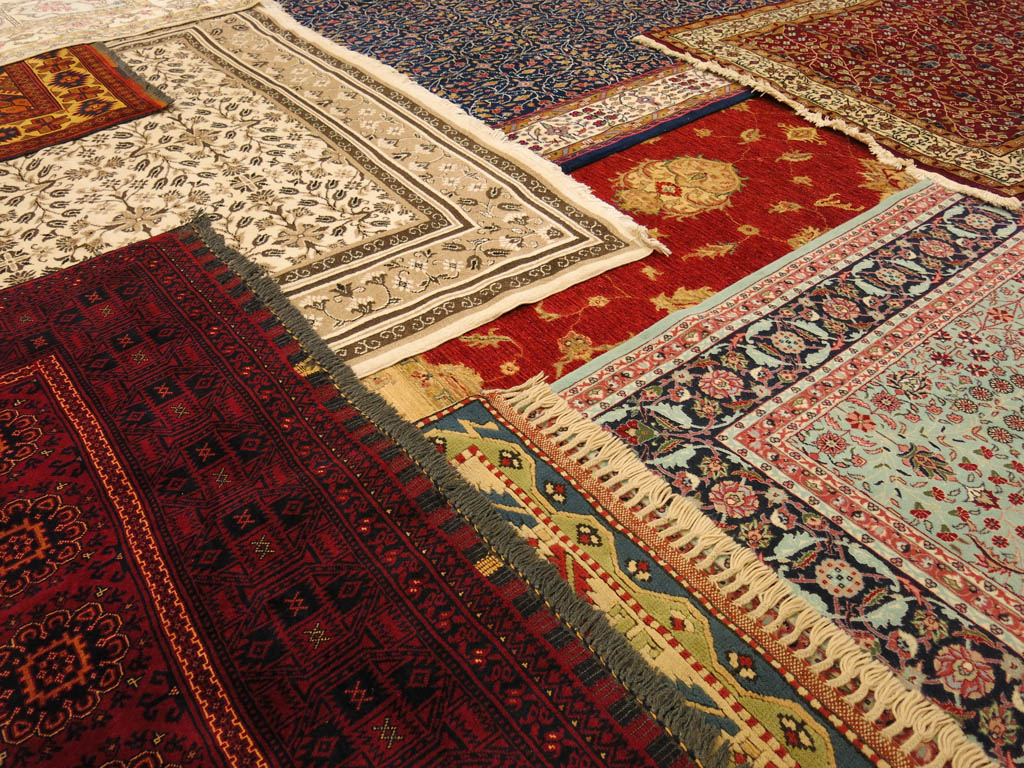 i wonder which one flies?

And with that our day was formally done! An afternoon by the pool awaited to chill out, and then a casual dinner with some of the group. We needed some rest and sleep by this point, both because of the early morning, and the hike that awaited us for the next day.