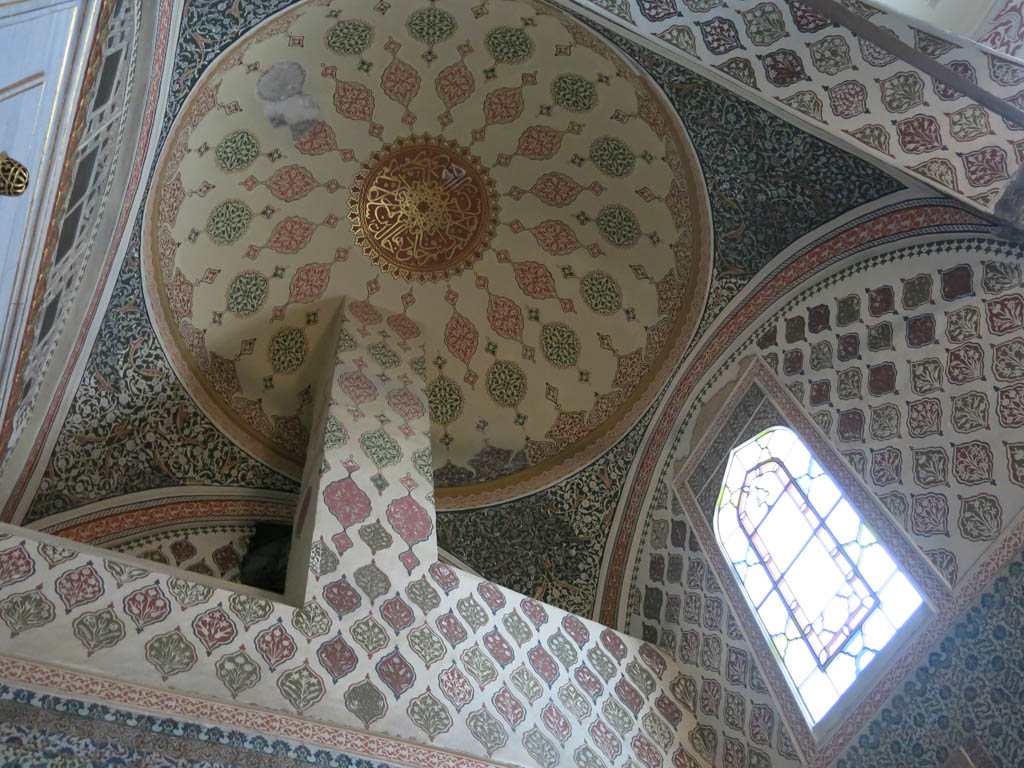 Today was our second main day in Istanbul, and we had another bit of a plan of attack. Since our G Adventures tour was to start tonight, and we would not really have any time to ourselves in Istanbul until the end, we decided to check a few things off that were on our must do list. So after some brekky, it was out into the very warm Istanbul day. 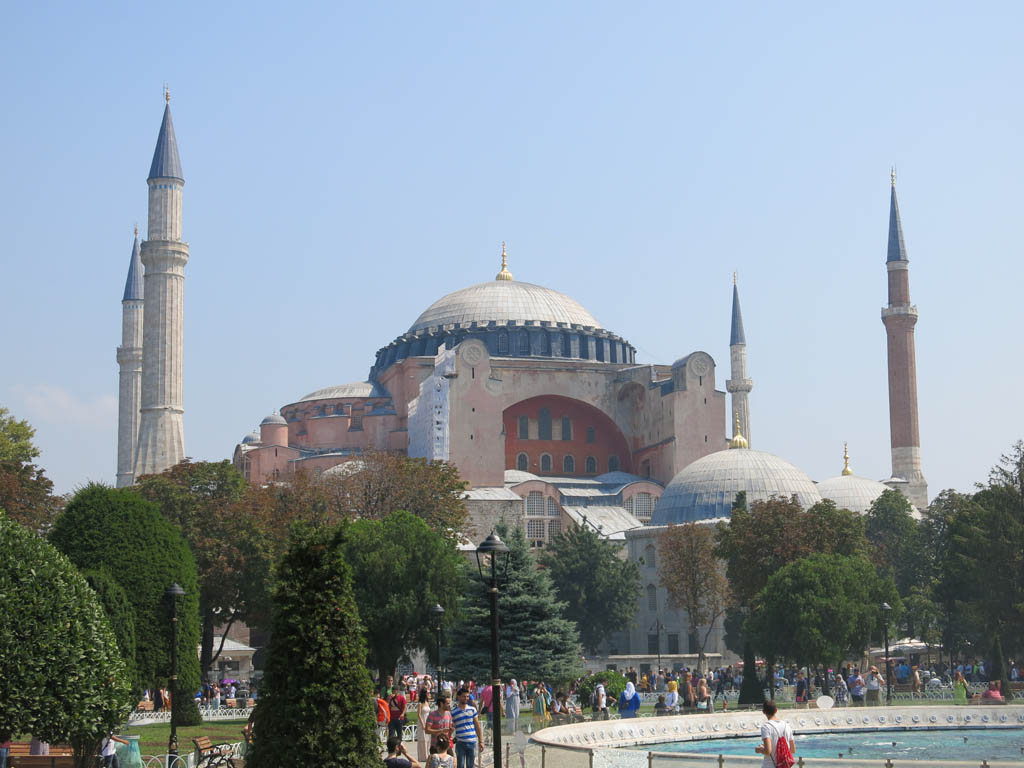 Our first port of call was to be the Blue Mosque. Again, the surrounding grounds gave us amazing views of both the Blue Mosque and Aya Sofya. It is hard not to snap more pics (or dolphin photos as they are known in my family). We headed straight back here this morning, as since there are only certain times you can visit each day (outside of normal prayer time is the only time to head in as a tourist), we thought we had best go when we had a decent window of opportunity. 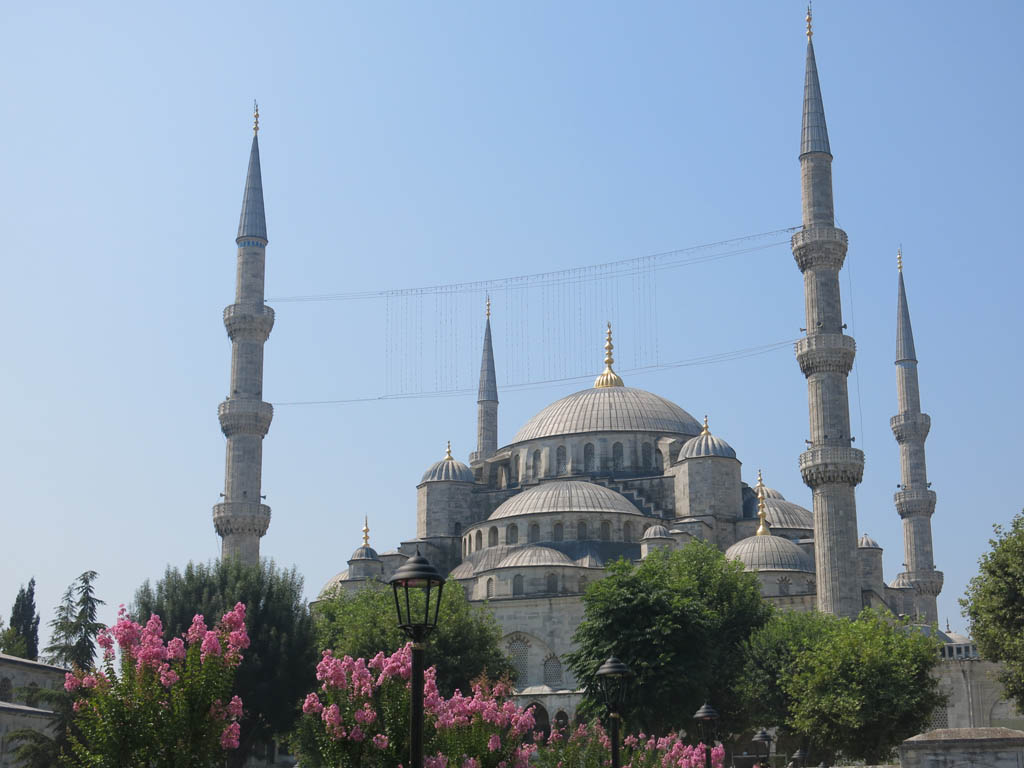 the crowds are hiding back there

Sadly, so did half the people in Istanbul it seemed, as were greeted with a MASSIVE queue to get in. Even with a bit of time up our sleeve, there was no way we were getting inside with enough time to do it justice. It would have to wait for a couple of weeks for our return. It was about now though that my first Disneyland quip emerged. To me, the queue to get in to the Blue Mosque looked just like a queue in Disneyland… long and winding, some families trying to push their way in, others just ignoring queue etiquette all together. Kate corrected me though… “Paris Disneyland you mean”. I guess she was right there (apologies to my European readers).

So rather than wait in a line we knew would be pointless, we headed to our next planned stop, Topkapi Palace. Between this and Aya Sofya, you are visiting the main two landmarks of Istanbul (and that is saying something as there is plenty to see). Topkapi Palace is now a museum, but was the main residence for the Ottoman sultans back a few centuries ago. The palace is huge and houses many buildings, garden areas, and amazing views of the Bosphorous. 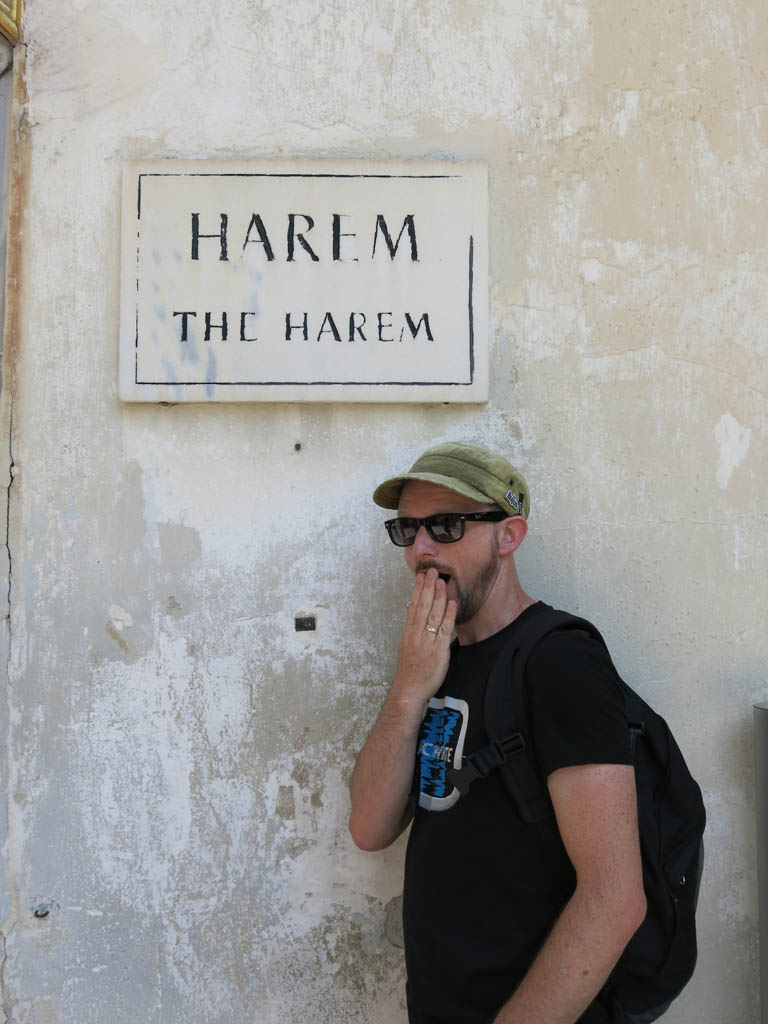 We started in the other main part of the palace… the Harem. Here we wandered through some of the many chambers and areas where the sultan’s ladies lived. 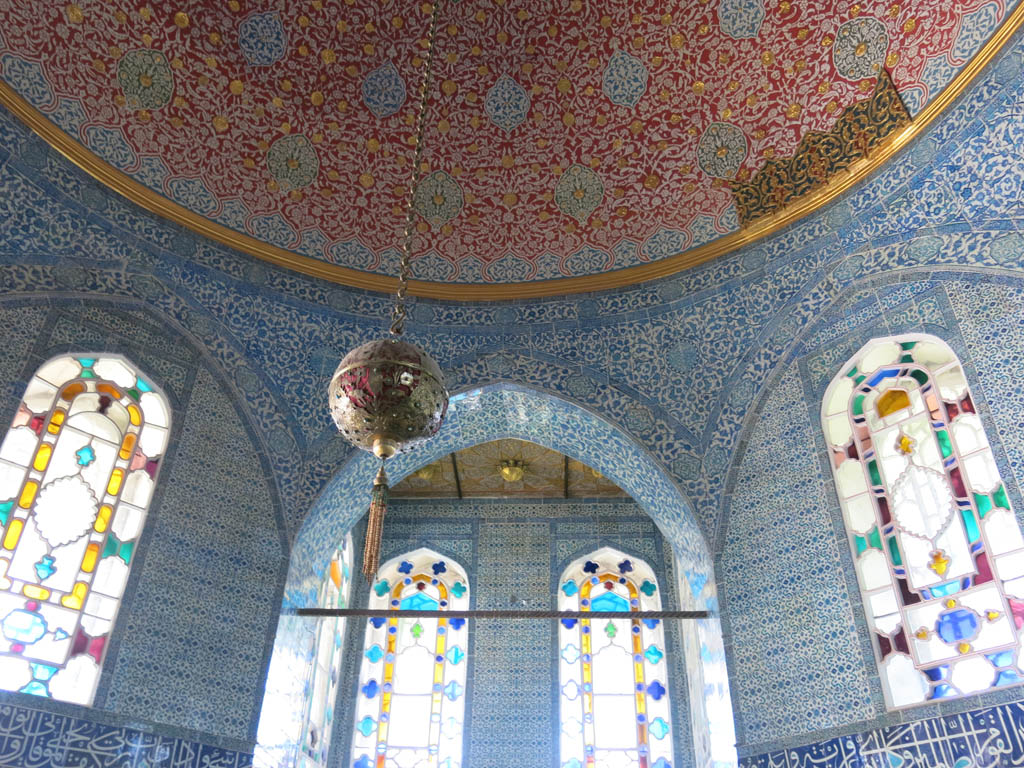 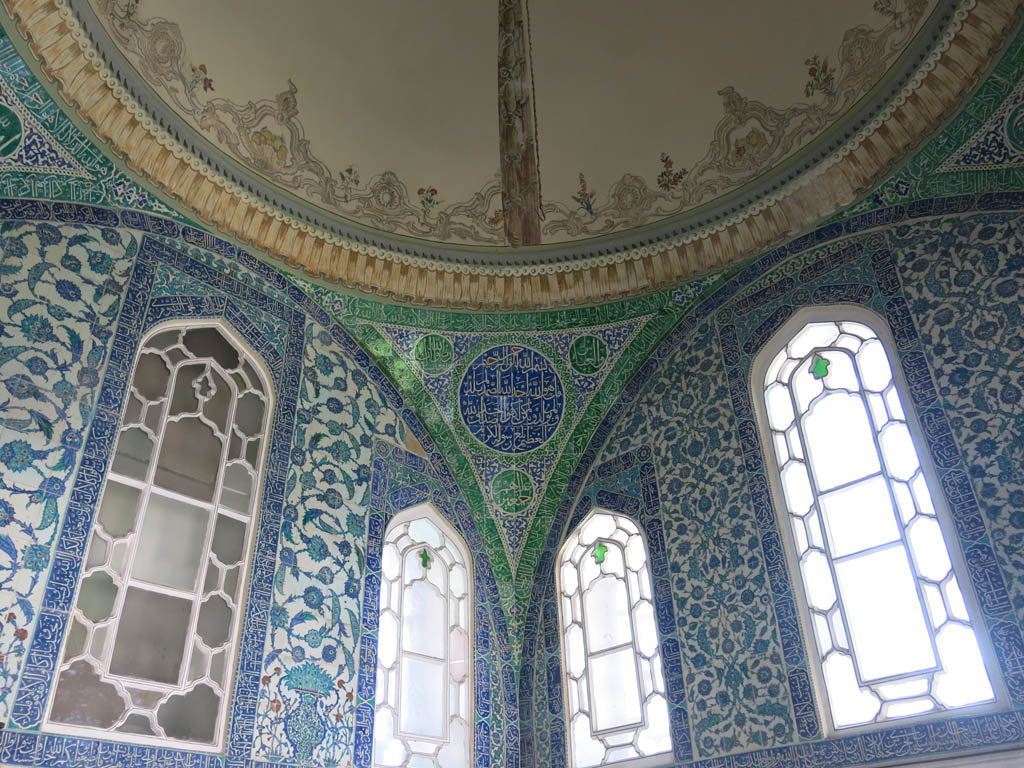 What I found amazing all through it was the incredible tile work. We found that the types of tiling changed a bit as we went through, and as it turned out our (not so) helpful audio guide let us know that we were indeed right, and that with a different ruler came some different outfitting of the rooms. 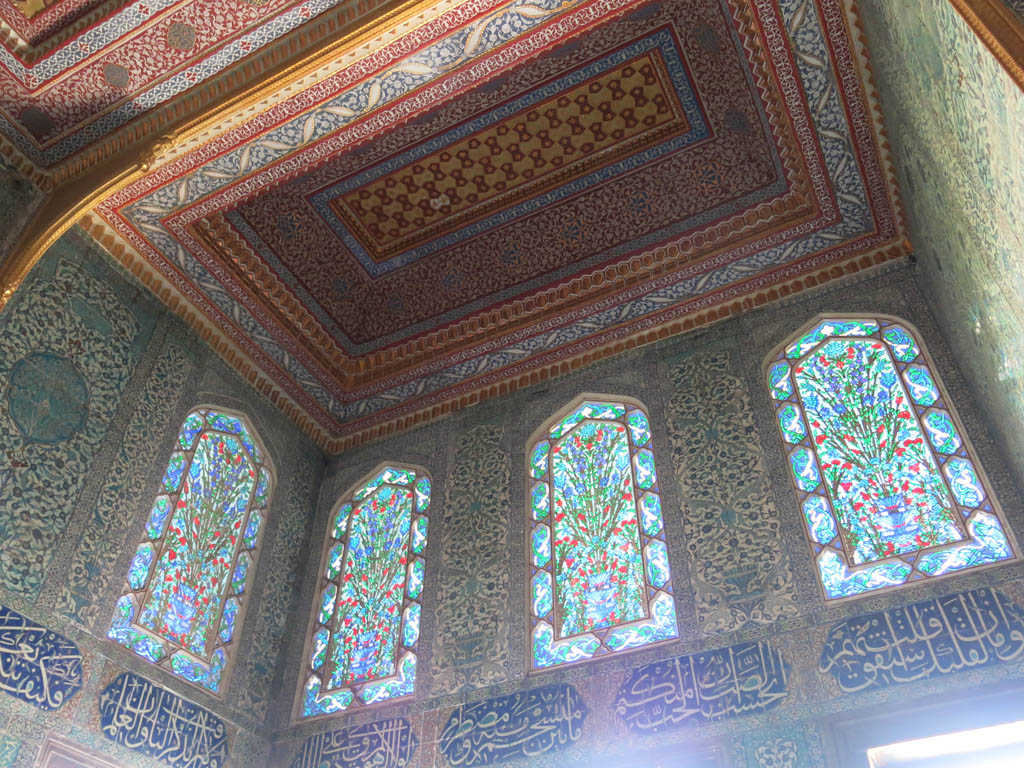 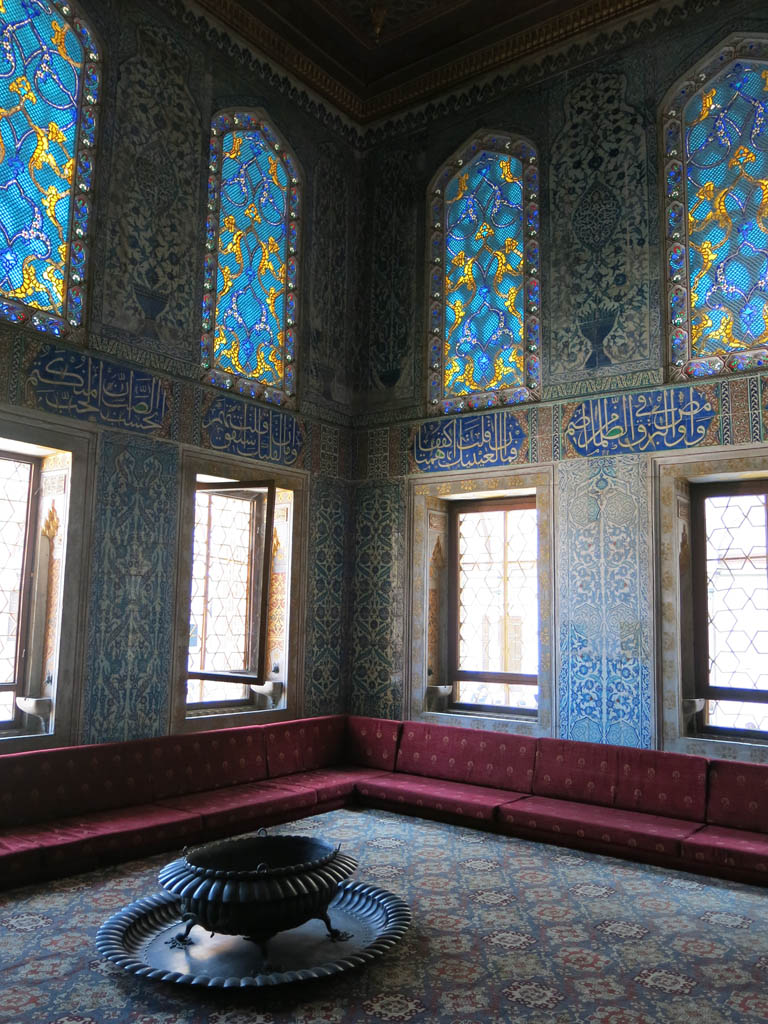 here is the “chill out” room

I got transfixed by the tiling and the domed roofs and all the archways, and so I found I was trying to snap pictures from all angles. I don’t really have the eye for great pics, but was happy just to try and see what tiles caught the light in particular ways, or what angles looked interesting.

Getting out of the Harem, we then explored more of the palace grounds. There was much to see around the place. There was ancient Islamic art, which we joined yet another queue to see, and again, many people just pushing in. Inside were many religious artefacts (including bits of the prophet Mohammed’s beard!), and things that were millennia old. Most of which photos were off limits, but that didn’t seem to stop many people.

In fact, today was a day where I found a lot of people just did what they wanted, whether it be pushing in line, taking photos, barging through places, and even disrespecting the religious custom. Now I may not be a religious person, but I am all about respect, and if they ask for long pants or whatever, then I will oblige 100%. But sadly, it seemed not everyone was interested in that. I guess that is the price of increased tourism. 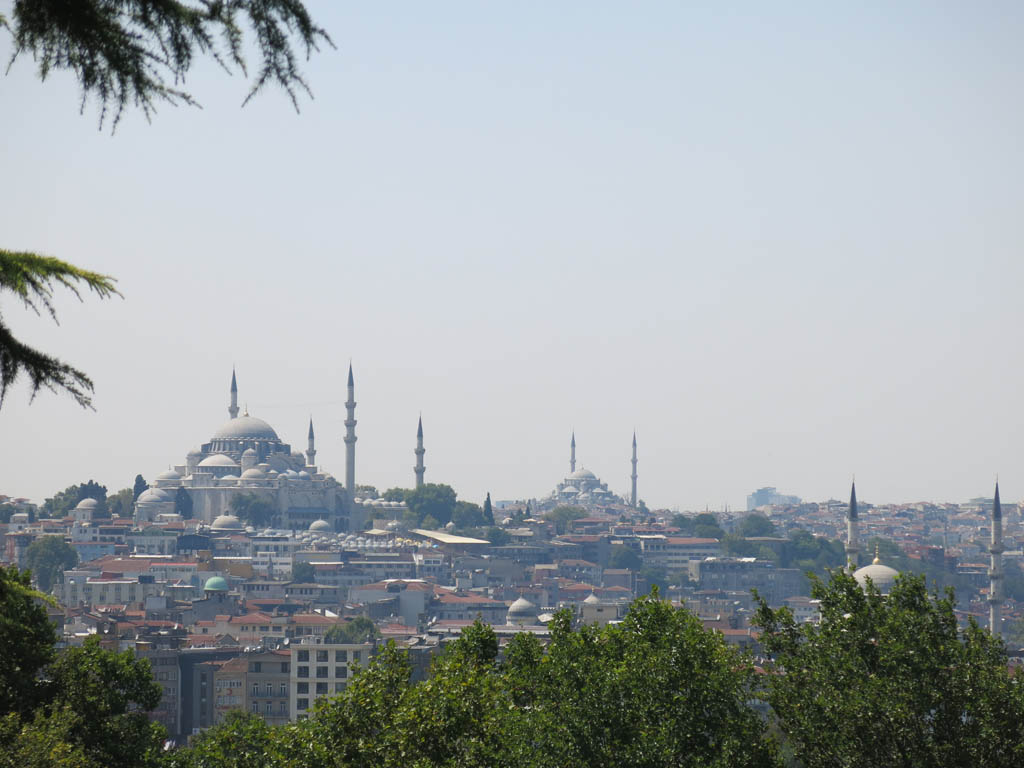 a view from the palace grounds

We took a time out to sit in the super overpriced cafe for a bit of lunch. It may have been overpriced, but the view was spectacular, looking out over the Bosphorous, into the asian side of town. I can’t begrudge a $7 can of coke when you have those views I guess.

About 4 hours disappeared in the palace grounds. We were hot and exhausted (it was much hotter than yesterday, and in all honesty, more like what I was expecting) but didn’t stop our day there. Instead, we popped into the nearby Istanbul Archeological Museums. Although much smaller than the palace, there was some good stuff in there. 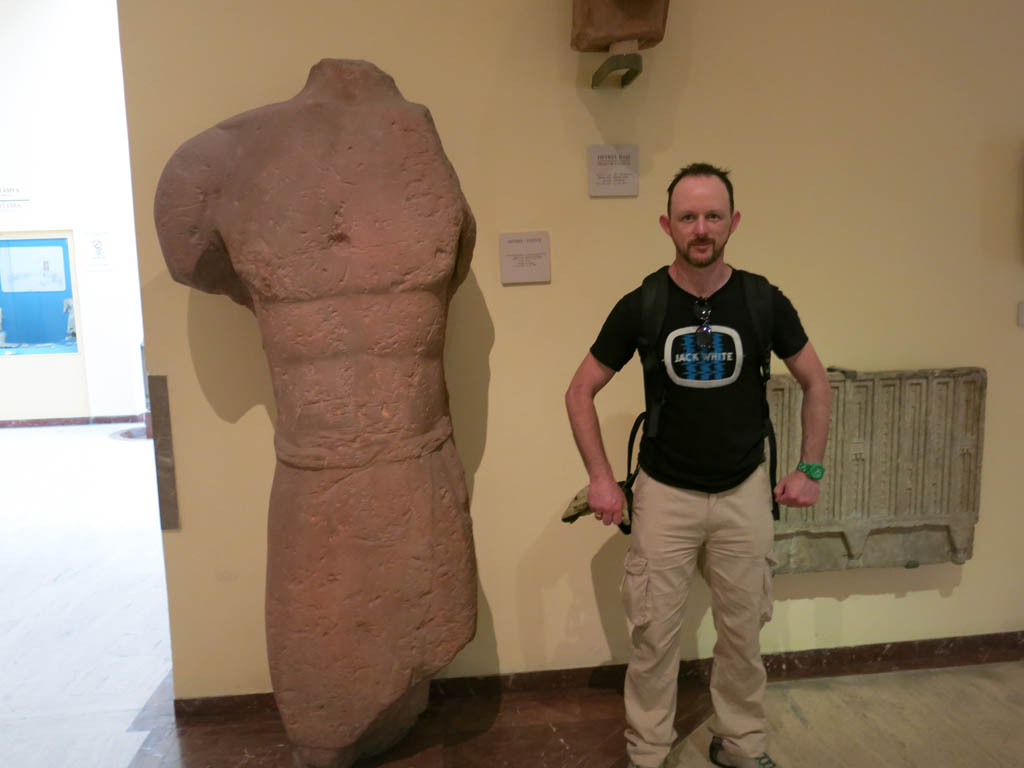 one beefy man and a statue 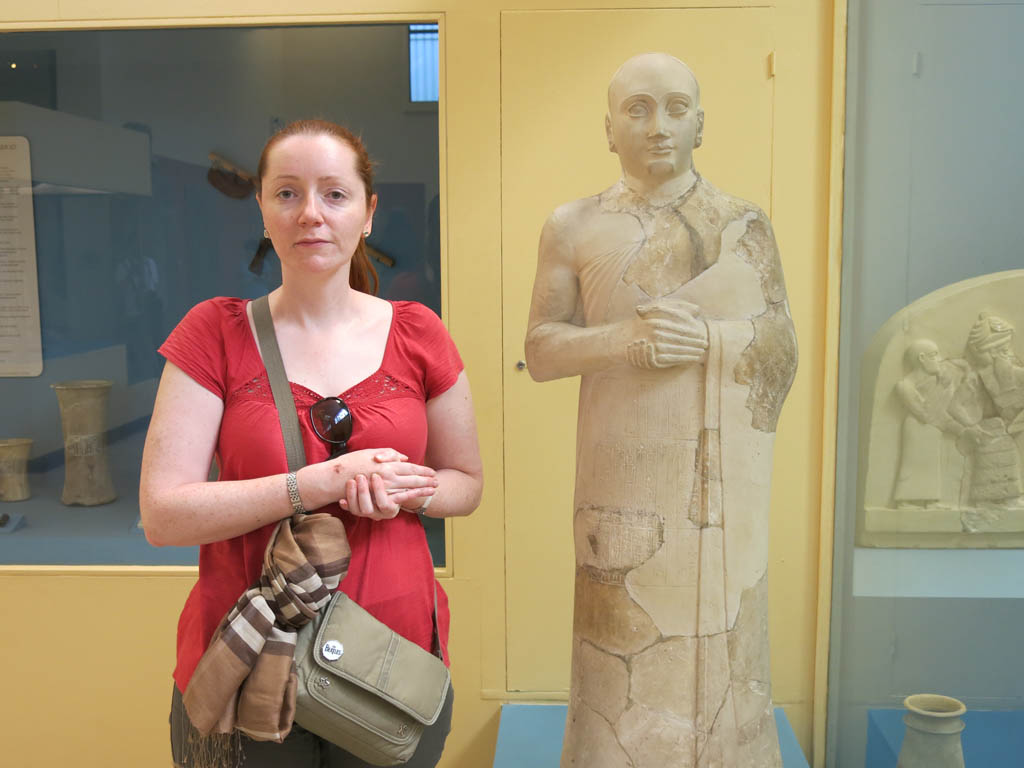 no joke here otherwise i might get in trouble

In particular, the Ancient Orient Museum was filled with lots of great stuff. Of course we took some time to get some cheesy pics with the priceless antiquities. 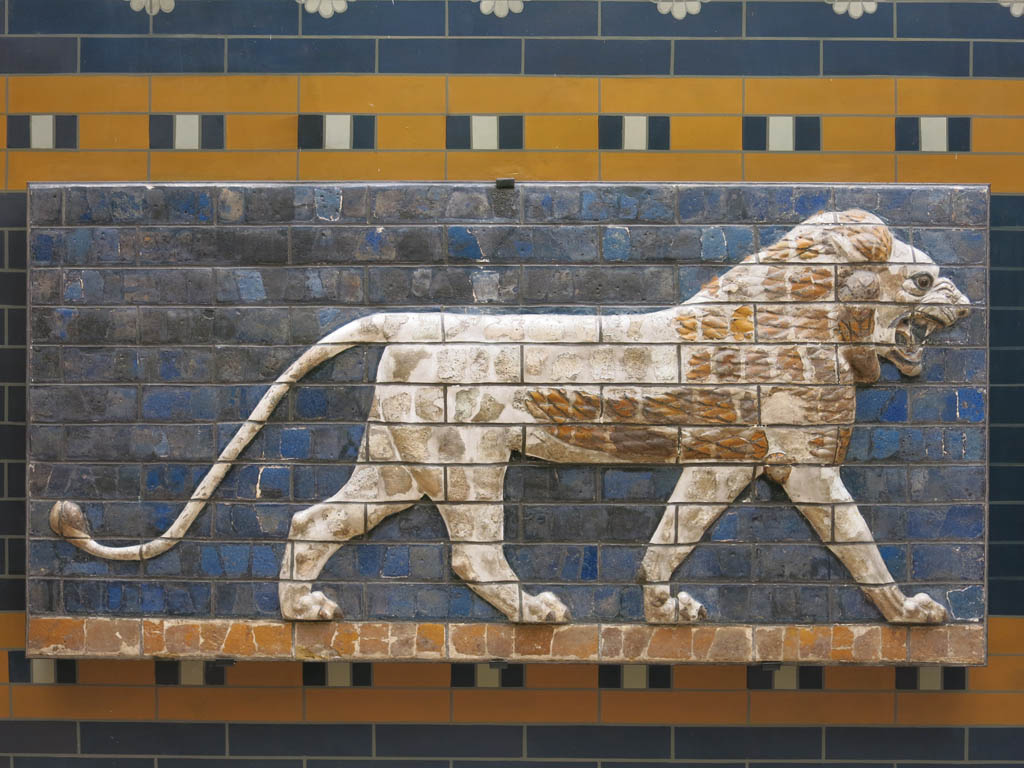 The Tiled Kiosk Museum was also pretty great. Like my fascination inside the palace, there was lots of amazing tilework to behold. 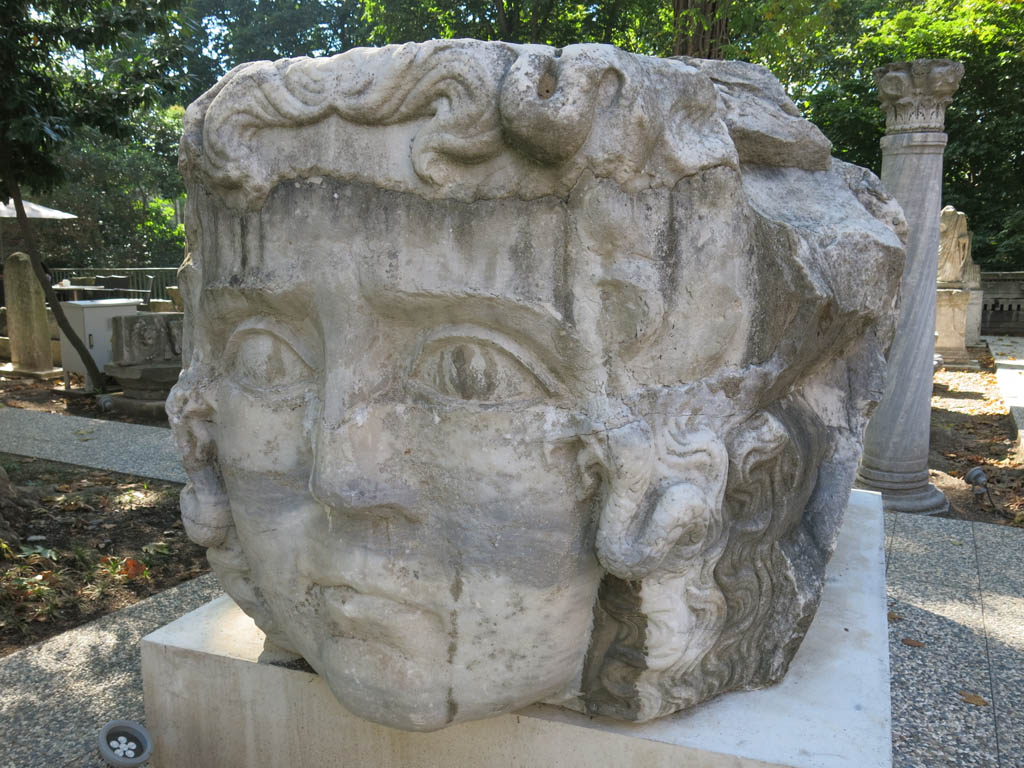 Not as good was the main building which was filled with archeological treasures. In fact both of us thought it was just a bit so-so, and we sped through it quite quickly. I imagine 5+ hours of checking out ancient pieces dulls the senses a little. In fact, the pieces in the garden outside were more interesting. Medusa even made a reappearance, turning passersby into stone. Maybe that is why there was so many stone figures in the garden? Have they not seen Clash of the Titans?

By this time it was about time to head back to the hotel. For technically today we start our G Adventures tour around Turkey! At 6:30pm we got to meet our group for the first time, including our tour guide Ibrahim, or Ibo as he was happy to be called. Our ragtag bunch consists of 8 Aussies, 5 US folk, a Canadian, and a Dutch lass. In the end quite an eclectic bunch of all ages.

A nice dinner got us all chatting and breaking the ice. Most of us were happy to start talking rubbish early, indicating that we were all at ease and that the next 2 weeks travelling together would be a bit of fun.